Our time in Sydney flew by far too quickly. When the morning dawned rainy and grey, we passed on a visit to the Taronga Zoo and instead did a road trip south to Bondi Beach. We were sorry to miss the native Australian animals other than the crazy drivers we encountered.

Our family picked us up and off we went. Hugging the shore as we left Sydney to head south to Bondi Beach, we first stopped at Mrs Macquarie’s Park and walked around the park for yet another view of Harbour Bridge and the Opera House. 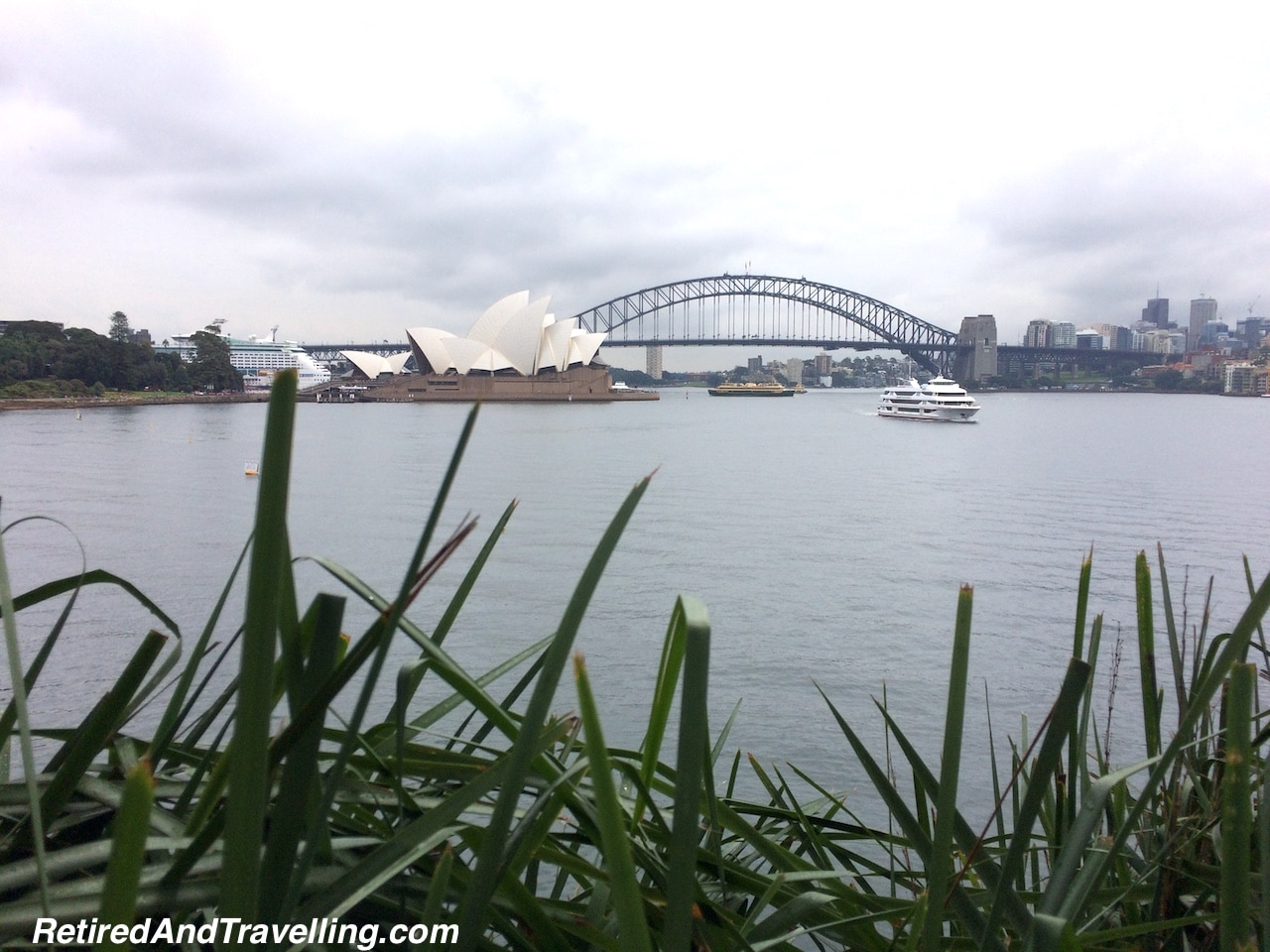 A long series of paths run around the shoreline right back to Sydney. Many people were out for their lunch run but we thought this might be a great place to come back with a bike. 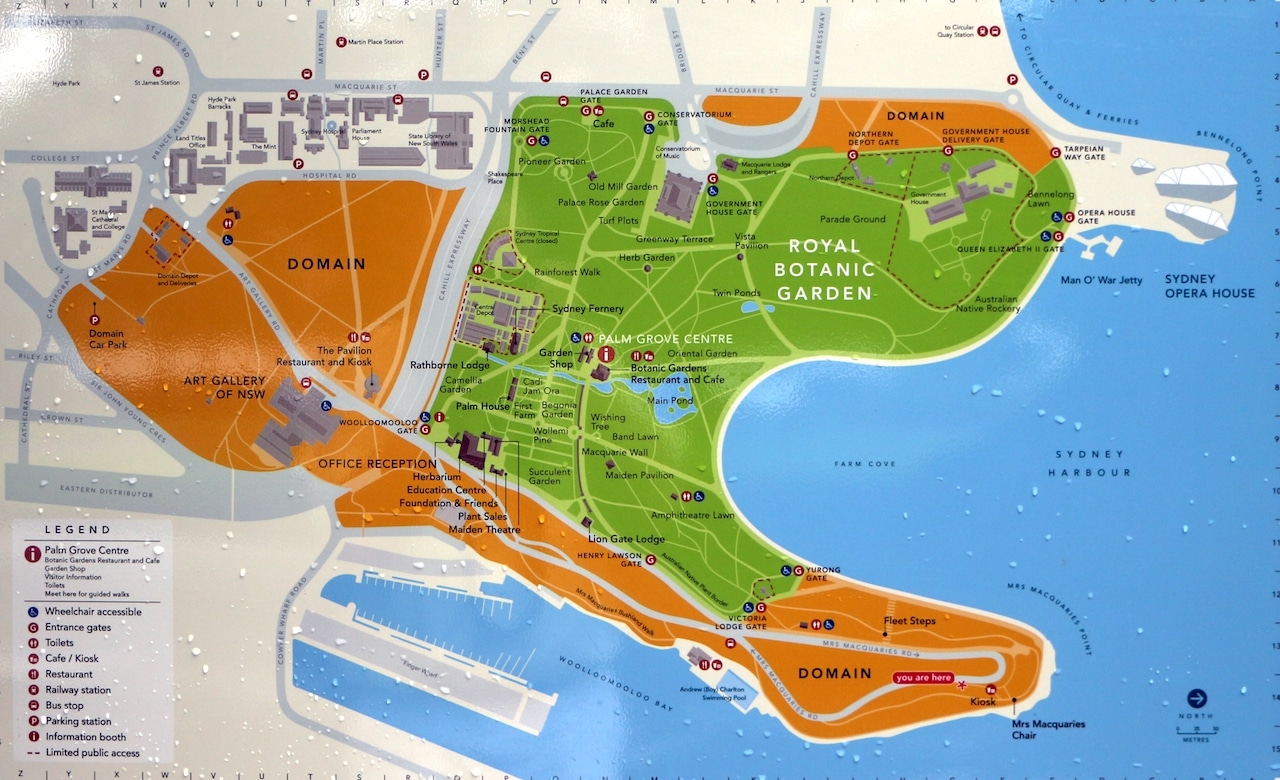 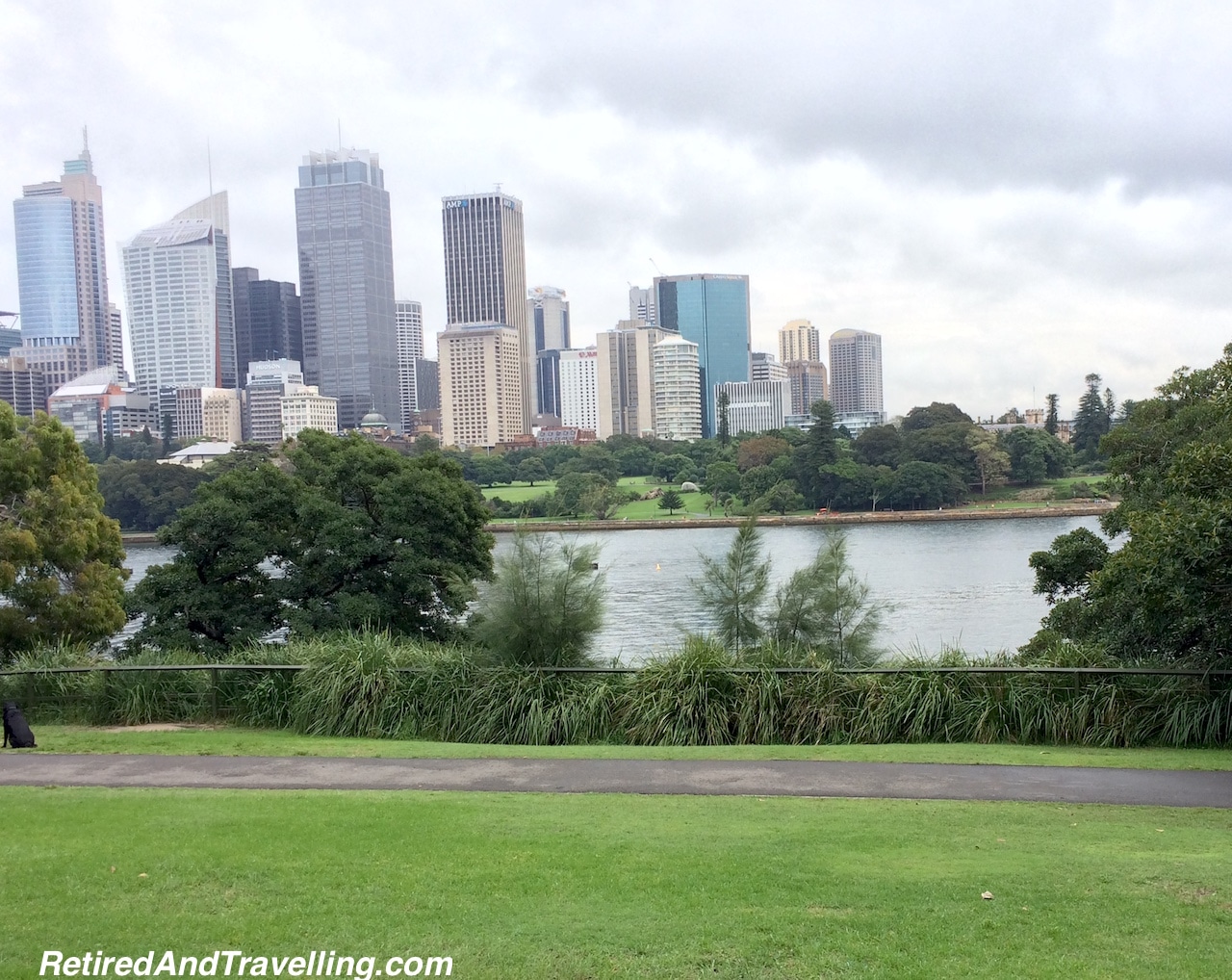 While we drove long, we got a quick glimpse of some of the sites we had missed on this quick visit – the Royal Botanical Gardens, St Mary’s Cathedral, Hyde Park, the Australian museum and the Art Gallery of NSW. There is much to see on a return visit. 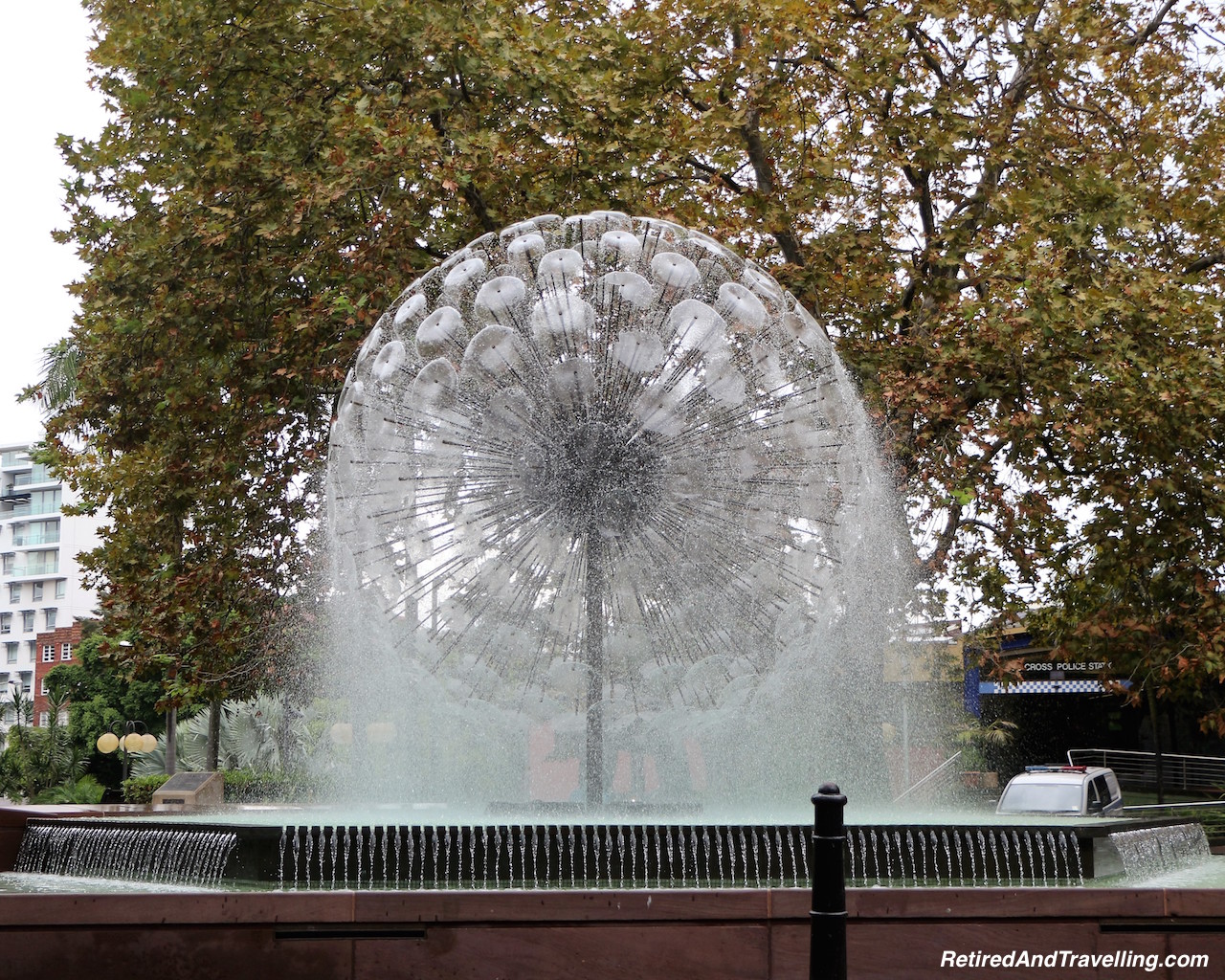 We made our way around Woolloomooloo Bay and the Royal Australian Navy ships in berth. 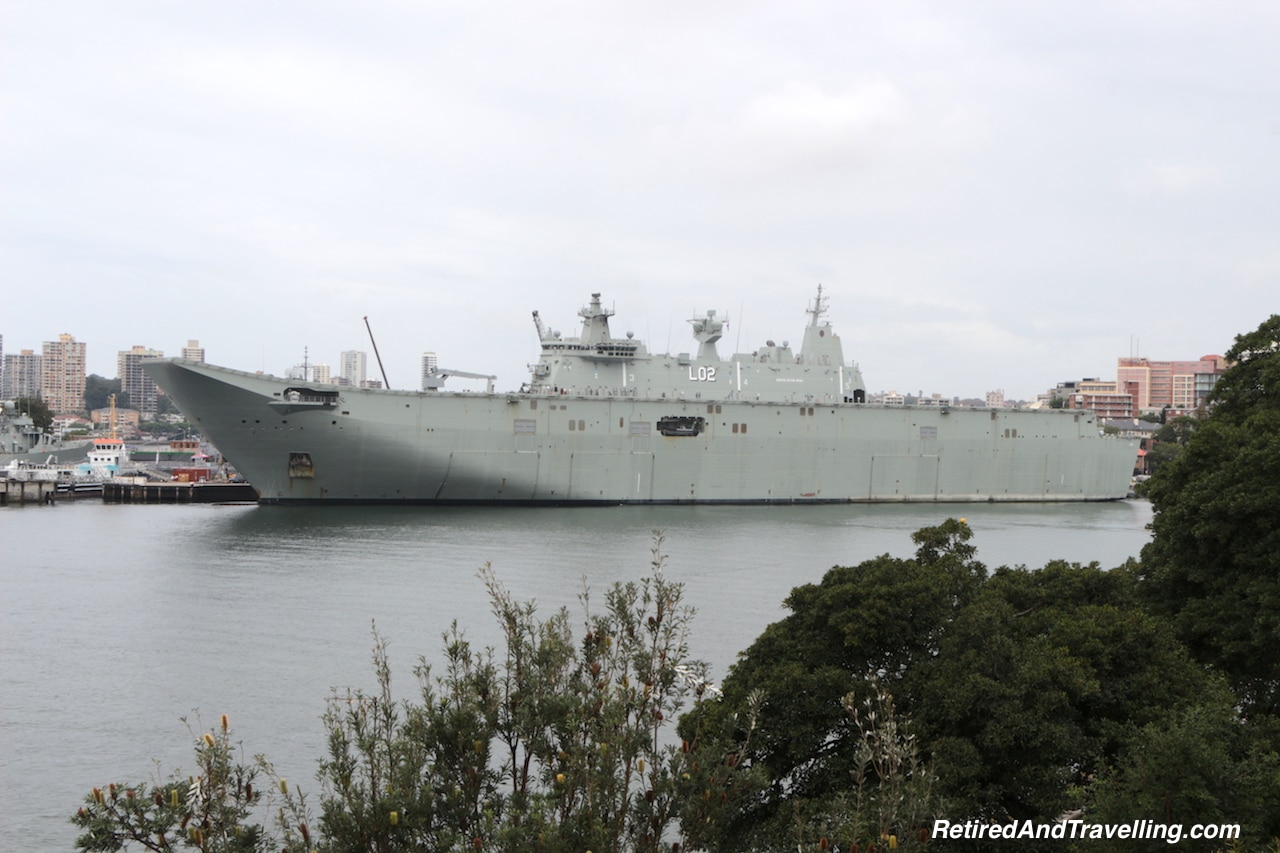 Hugging the shore we got an interesting glimpse into various neighbourhoods and again marvelled at Sydney the water city – so much shoreline, so many viewpoints on our way south to Bondi Beach.

Head To the Sea at Gap Bluff

We planned a stop at Watson’s Point on our trip south to Bondi Beach. Parking the car, we climbed up the rocks at the Gap Bluff. Even from here we could look back and still see downtown Sydney and the Harbour Bridge! 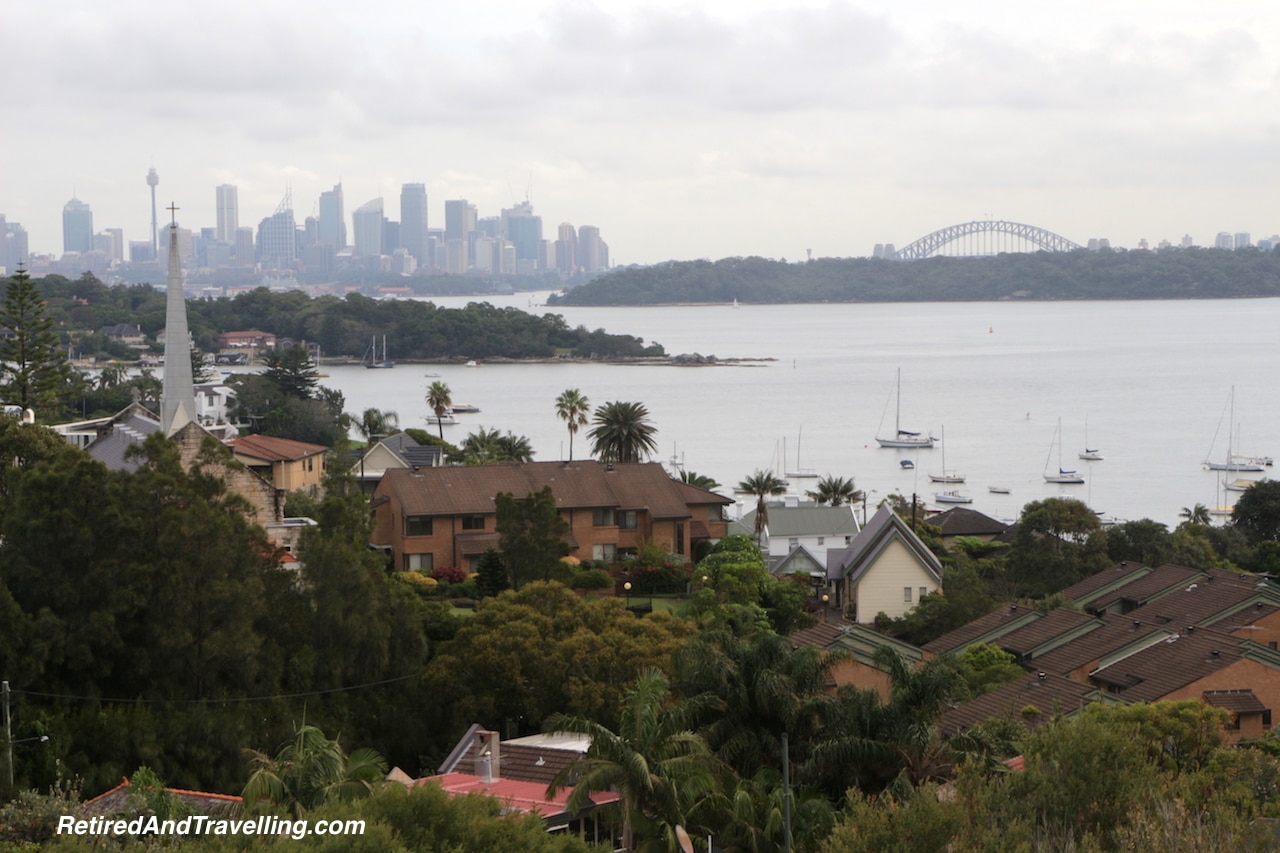 This point was at the mouth of the Sydney Harbour and looking out we could see the Tasman Sea. Looking down over the serious barriers at the cliff edge, we could see great crashing waves and bright blue water. 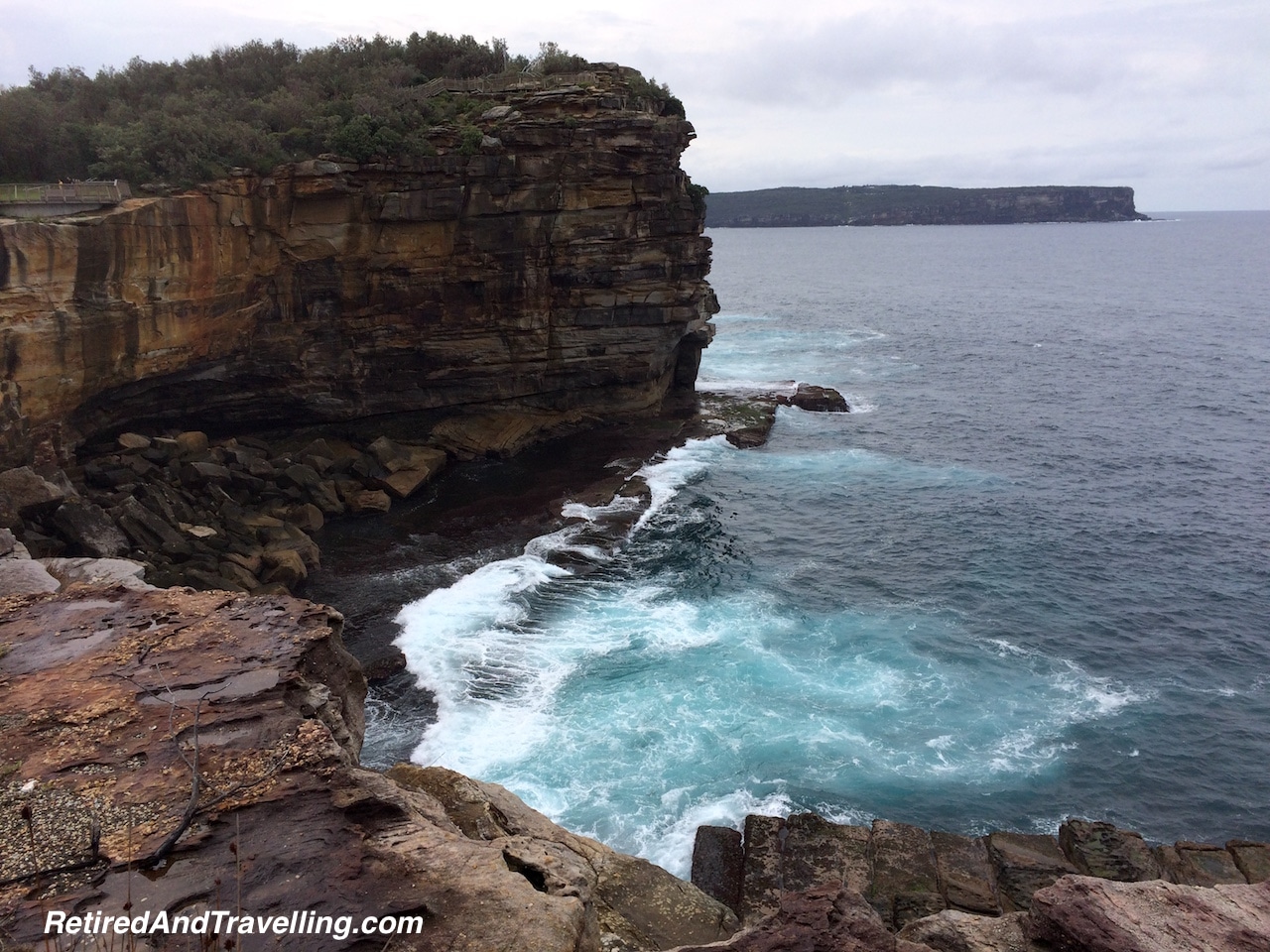 This was apparently a known suicide spot. Video cameras were visible all along the paths and there was a call box direct to a help line and posters about suicide. A sober reminder that not everyone feeling the call of the sea were cheered by it. 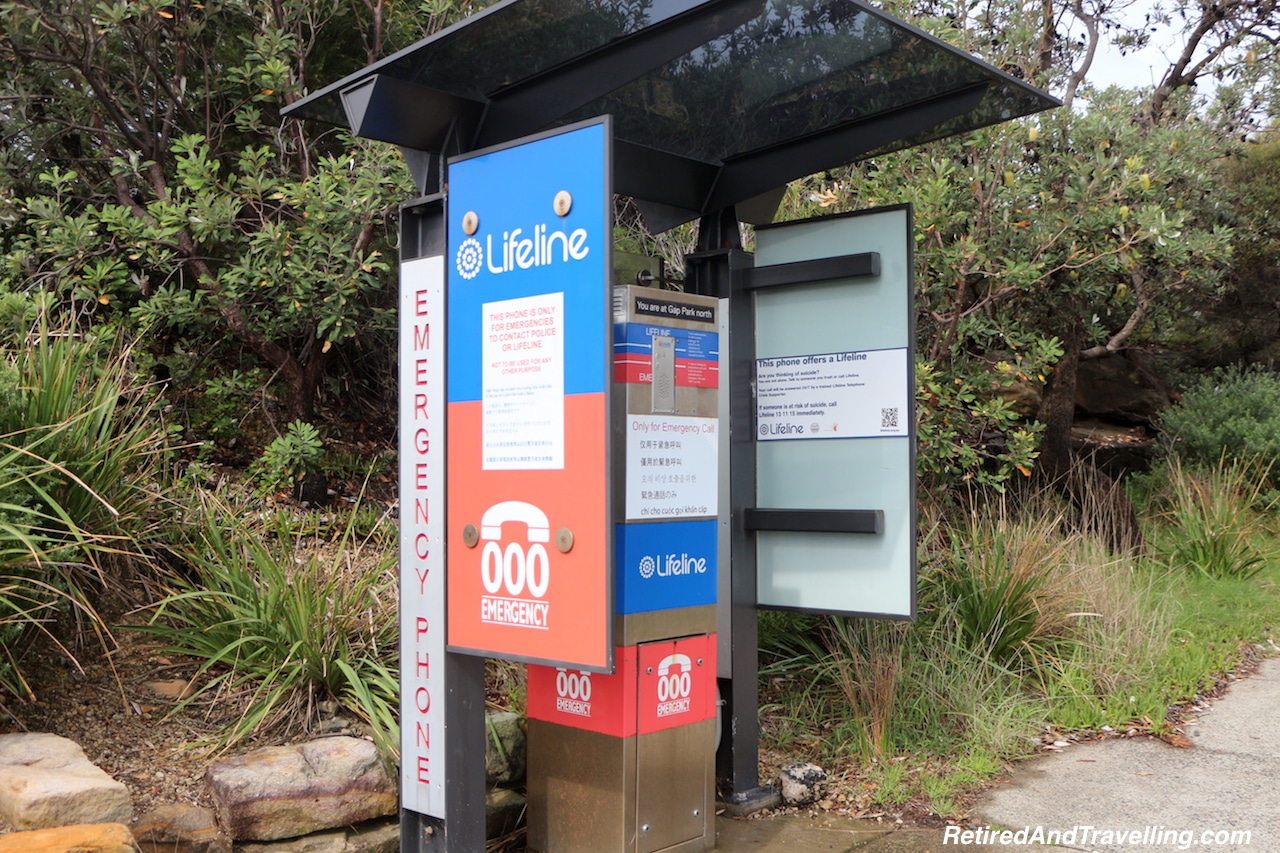 We reached our final stop on our trip south to Bondi Beach. Parking a few blocks from the beach, we walked to the beach. It was too cold to swim but you could see surfers in wet suits hanging out in the water waiting to catch a wave. 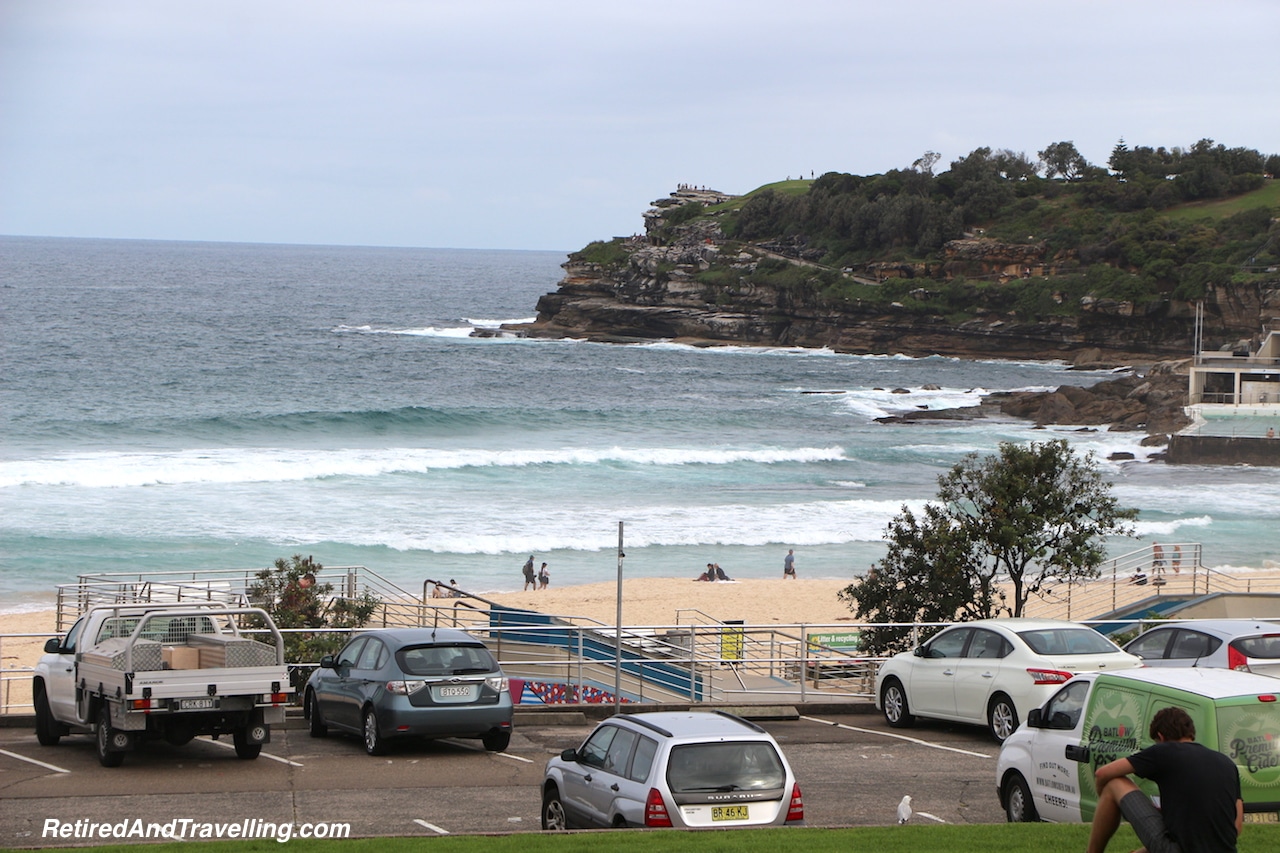 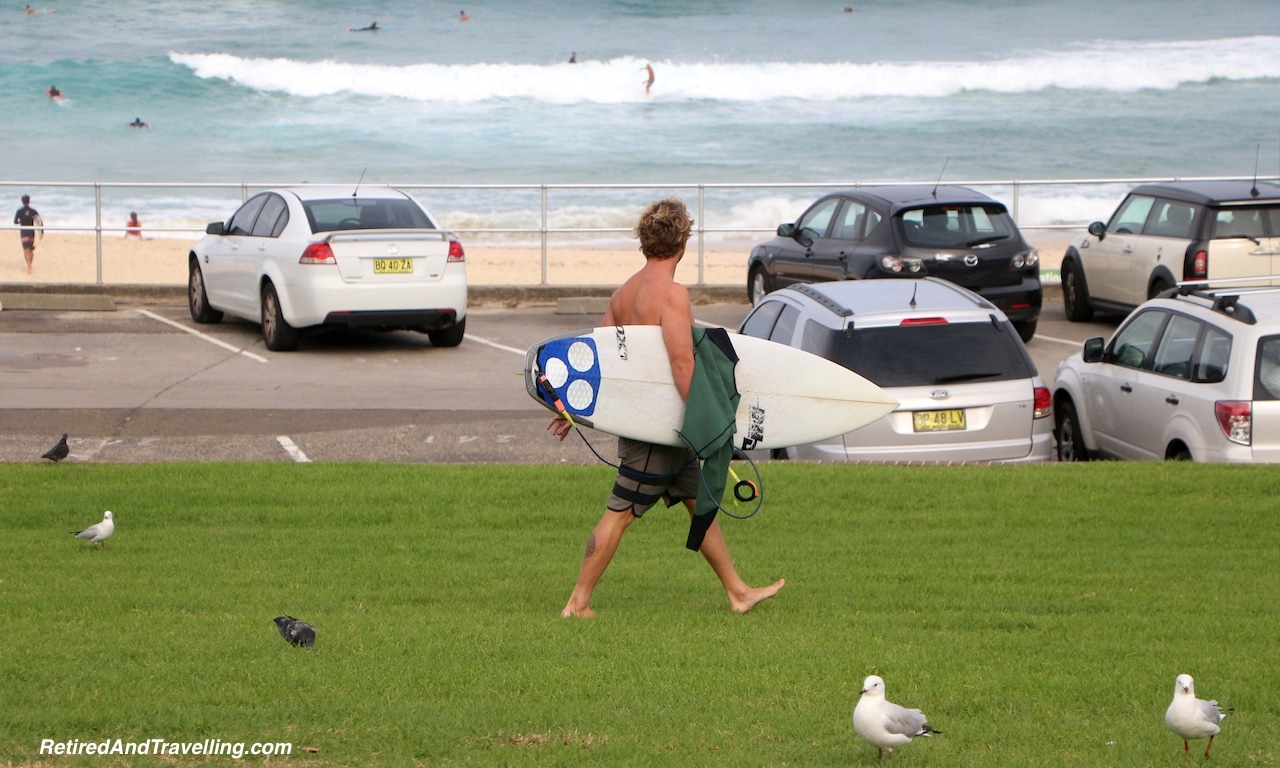 Walking along the beachfront street, we found fish and chips, as well as octopus for take out. Taking our lunch to the lawn overlooking the beach, we were soon swamped with birds looking for a handout. 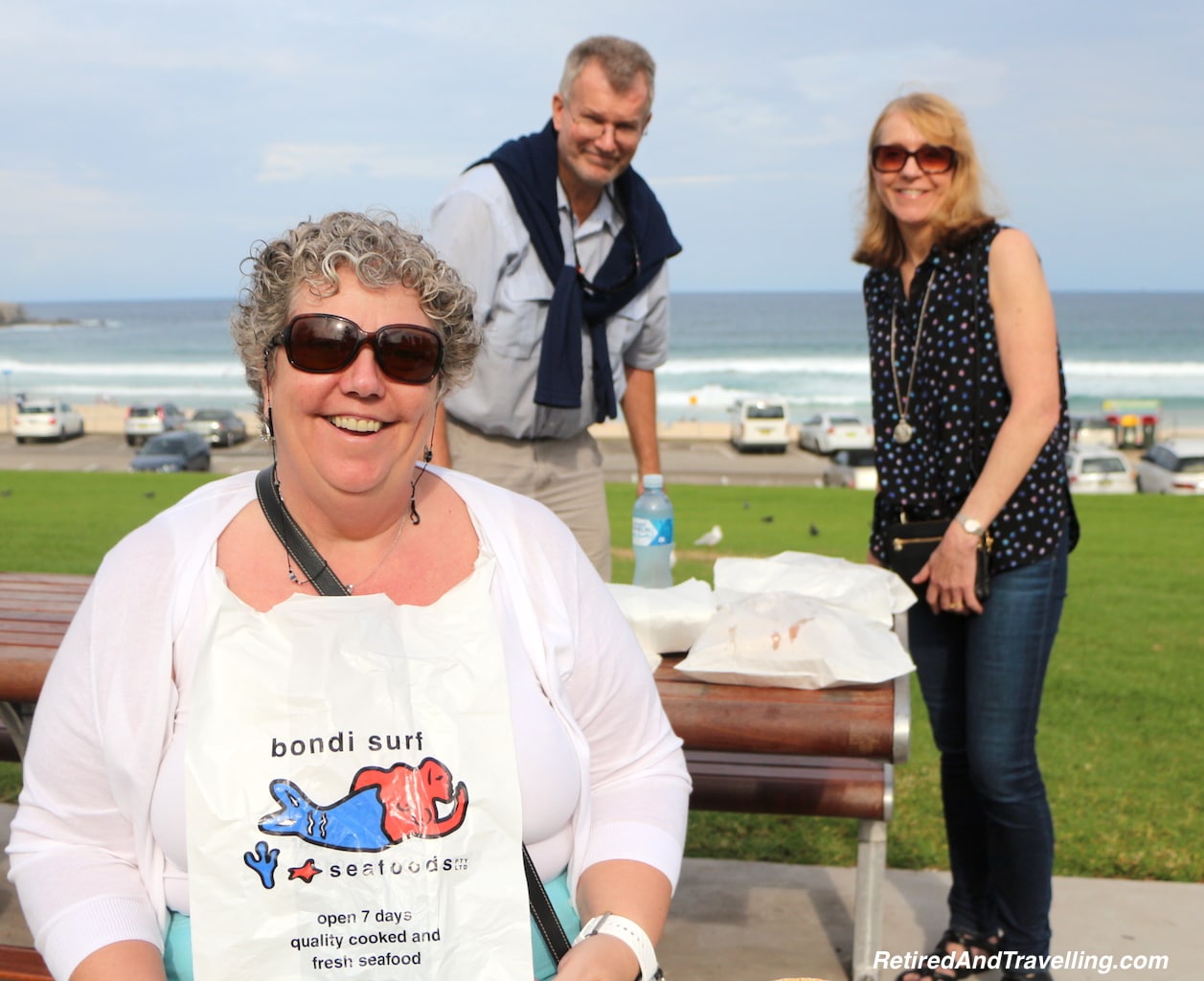 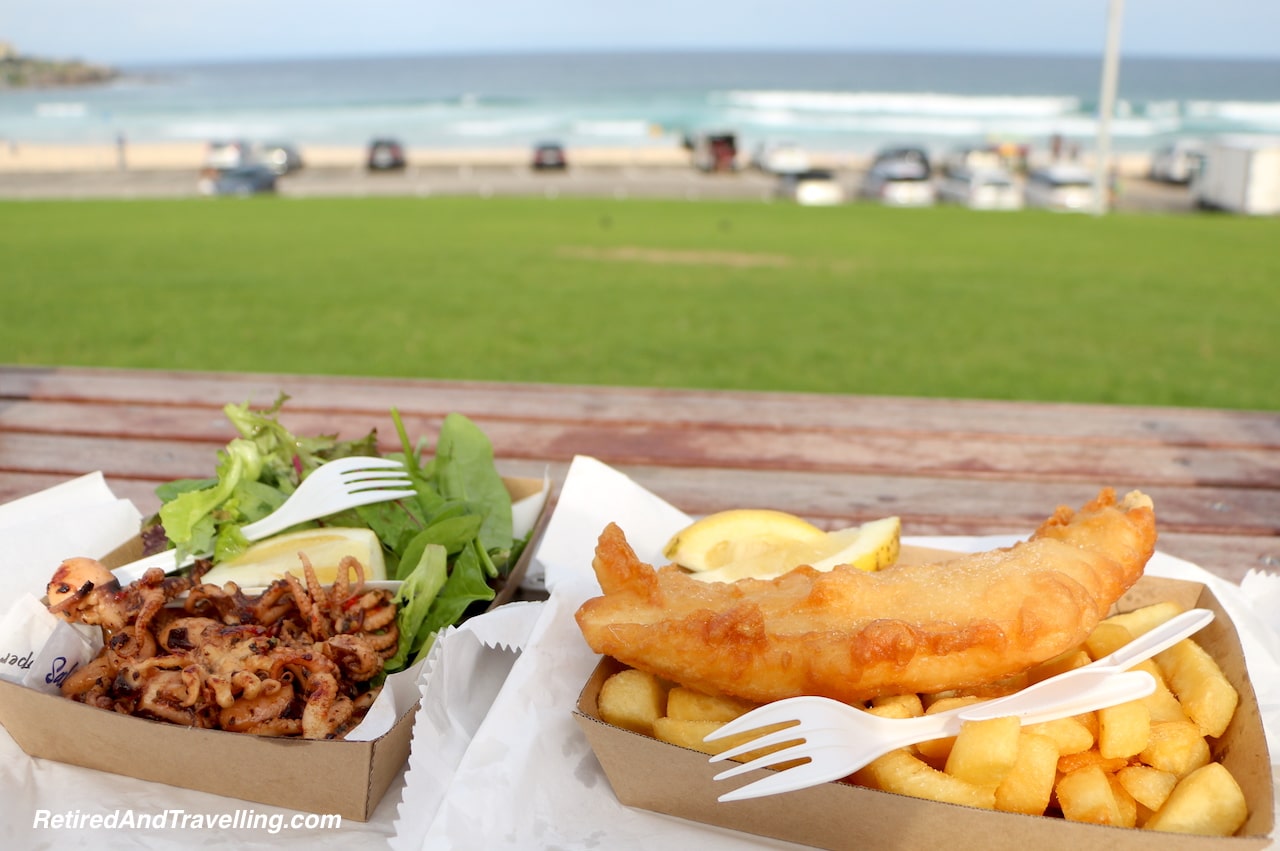 People were throwing food and watching the birds fight to get the food. 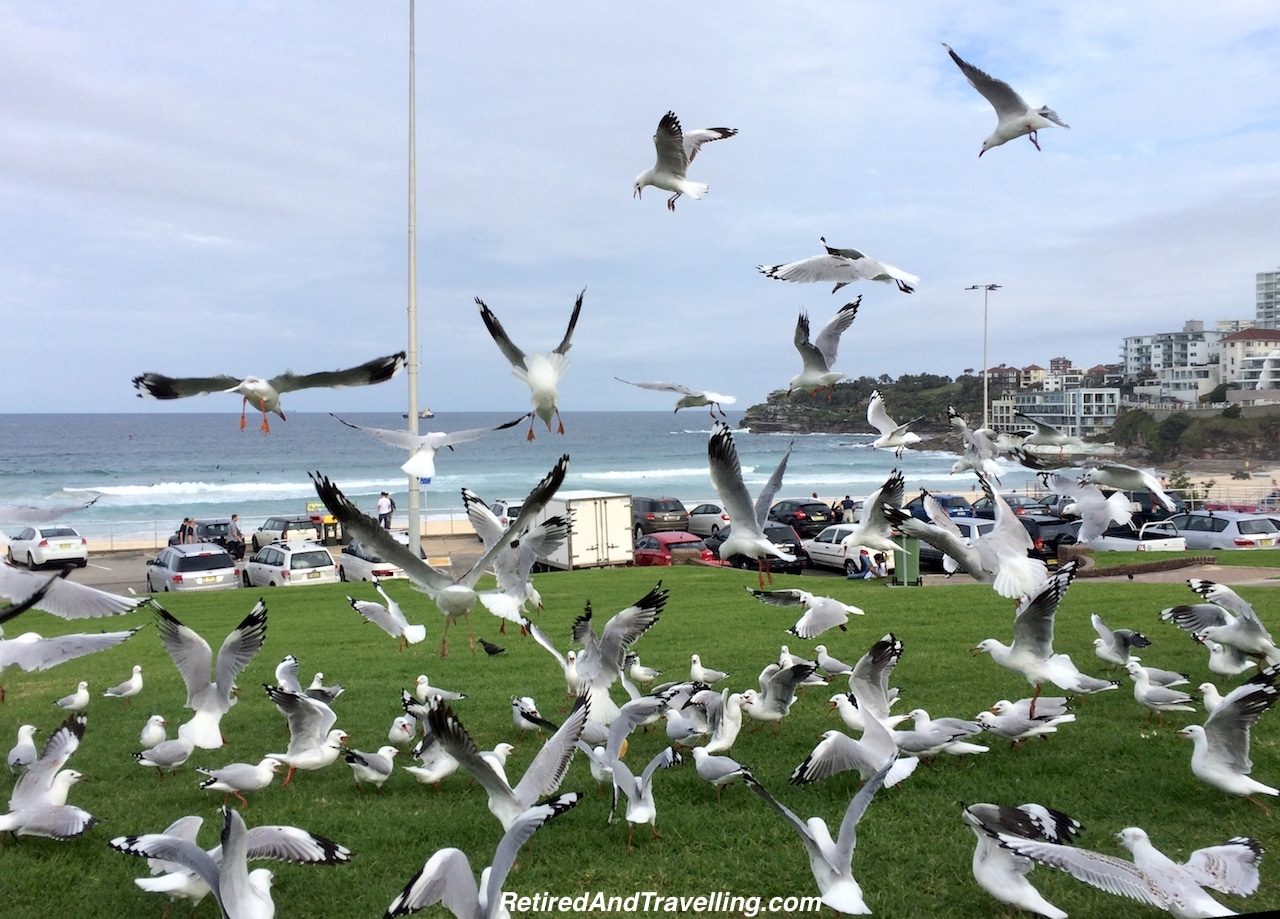 The final stop at Bondi Beach was at the Nitrozone Nitrogen Gelato shop. While there were some fixed gelato treats, you could also pick your ingredients and have your own concoction made! We watched the show as each cup of gelato was made freshly frozen. While this is the first time we had seen something like this, we would again see fresh gelato made in a small shop in Krabi, Thailand! The large commercial churn moved through the ingredients as liquid nitrogen was blasted at the bowl to get extreme cold temperatures. It was a great show and the end result, whether salted caramel or chocolate brownie, was worth the wait. 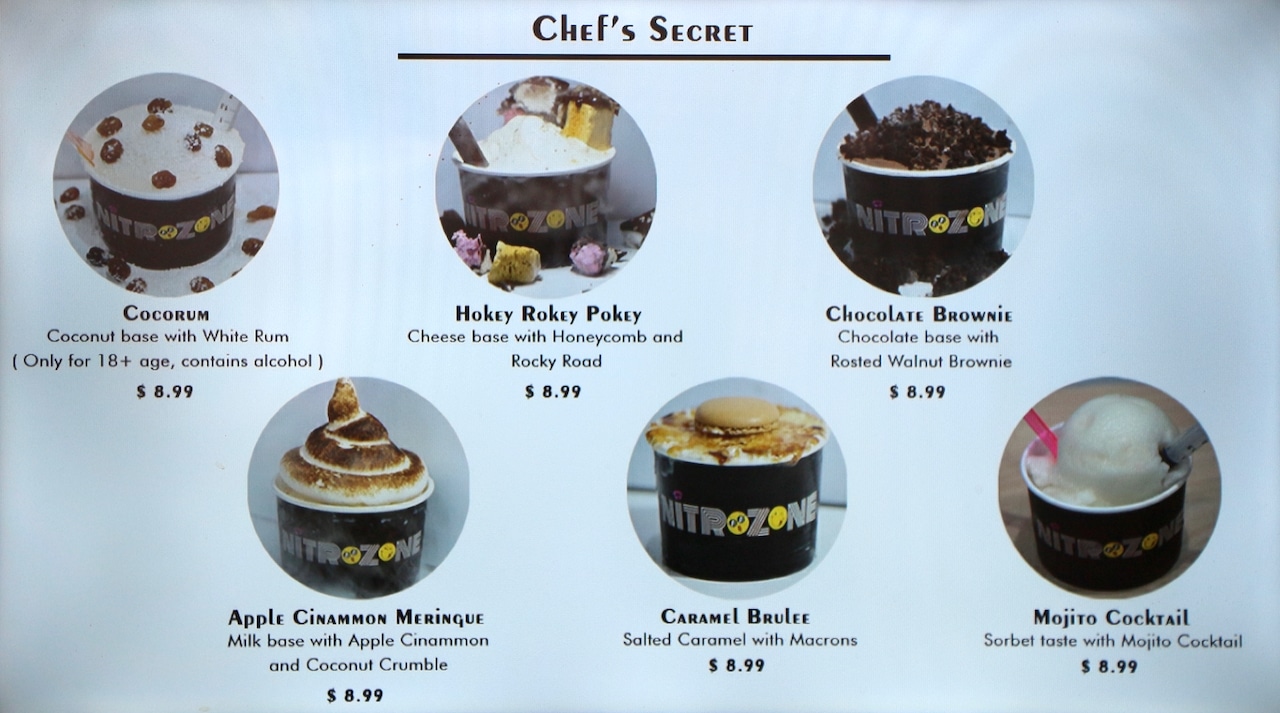 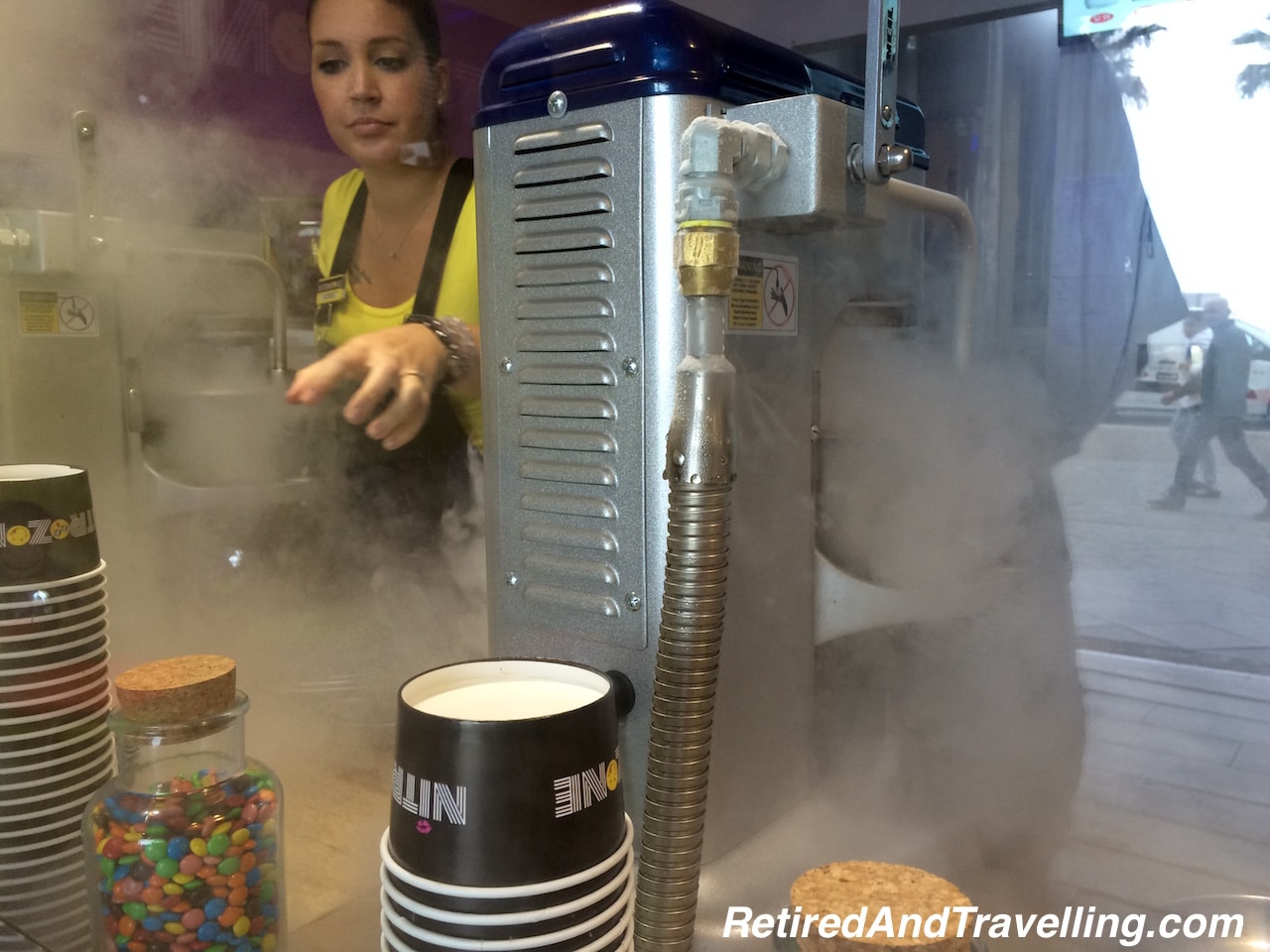 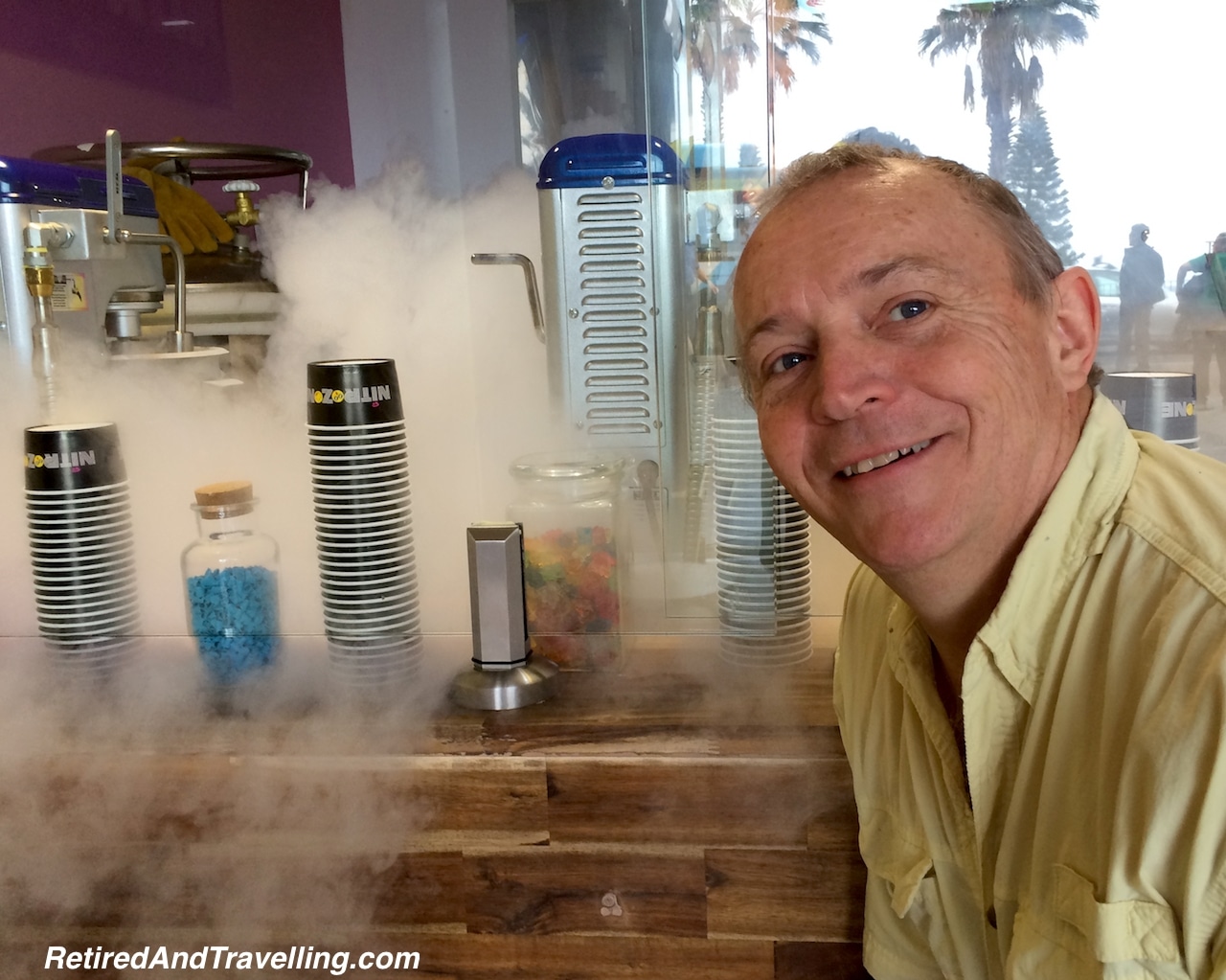 We had started our exploration of the water city that is Sydney with a trip north to the beaches of Manly and beyond. This trip took us south to Bondi Beach. We had enjoyed our trip inland to visit the Blue Mountains, but we are most at home spending time very close to the water.

Did you head south to Bondi Beach when you were in Sydney? Were there other great water spots that we missed along the way?