Our First Outing In Prague

The day we arrived for our 8 day visit to Prague we took it easy. We met with the tour leader we would join later in our Prague trip. He had a lot of suggestions on things to see and do. But by the second day we were almost back to normal and it was time to head off on our own to explore Prague. The top thing on my list was to take the funicular and get a panoramic view from the Petrin Tower in Prague.

This high observation point was billed as the little Eiffel Tower of Prague! We saw the tower high on the hill from many spots around Prague. 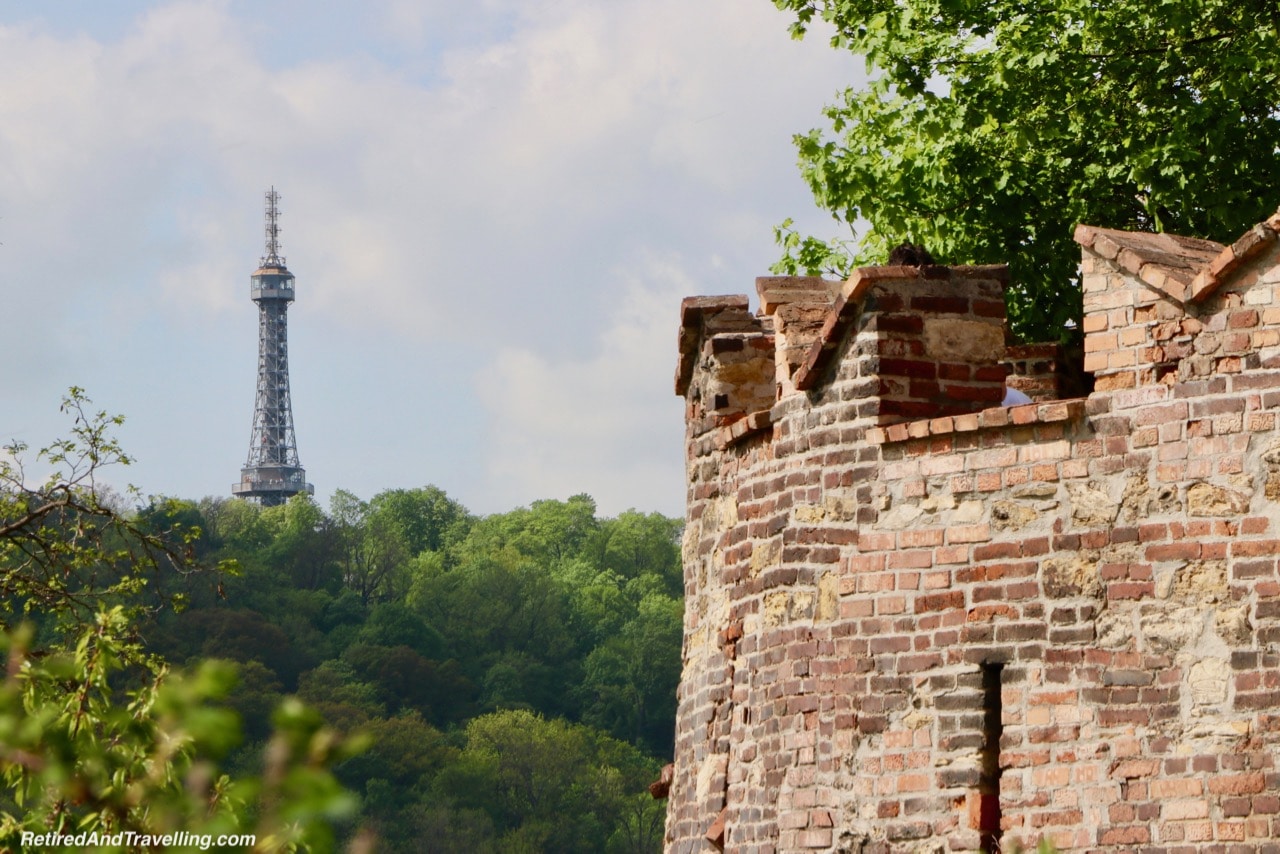 Navigating Our Way Around Prague

We spent a little time familiarizing ourselves with the tram and subway lines in Prague. The city was well served by public transit. And that is usually our option to get around. When we talked to the concierge at the hotel for specific route directions, the first thing we learned was that the funicular was not working. It is a good thing we checked or we might have got off at the bottom of the hill. I was not really up to climbing to the top.

We found that we could take Tram 22 or 23 to the top by the Petrin Tower in Prague. But before we could take the tram we had to go to the local subway station to buy an all day transit pass. You can buy one or three day passes. They give you access to the buses, trams, subway and to some of the small ferry boats going across the river. Our hotel concierge only had single tickets that lasted for 30 minutes. We figured a true 24 hour pass would give us access from mid-day one day to mid-day the next.

Tram 22 or 23 goes from the downtown area and up to the Castle area of Prague. We exited at the Pohorelec stop. The Petrin Tower was just barely visible in the distance.

Walking Through The Strahov Monastery Grounds

From the tram stop we continued to walk up. We went in through the gates to the Strahov Monastery. This put us on the paths through the park to get to the Petrin Tower in Prague. 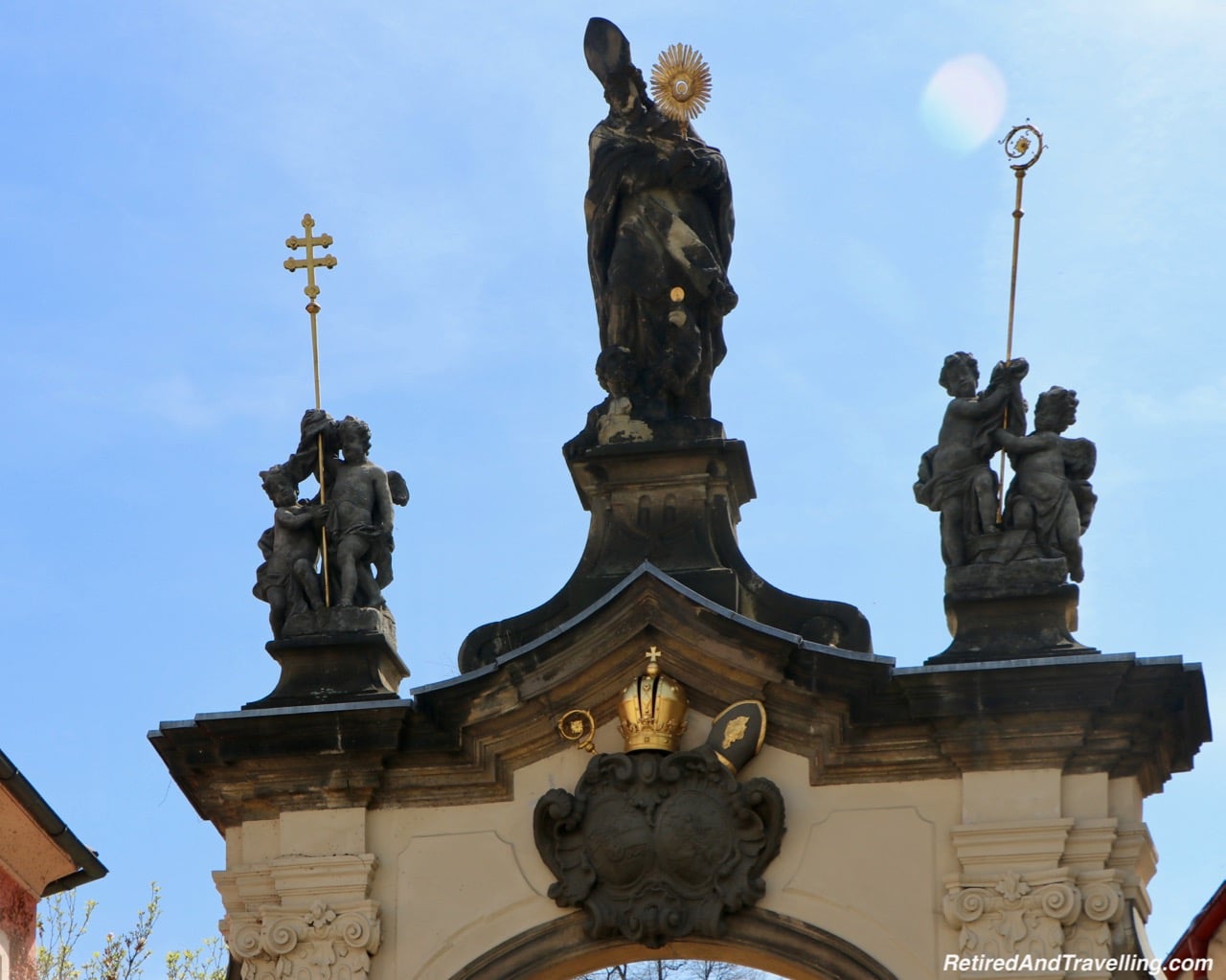 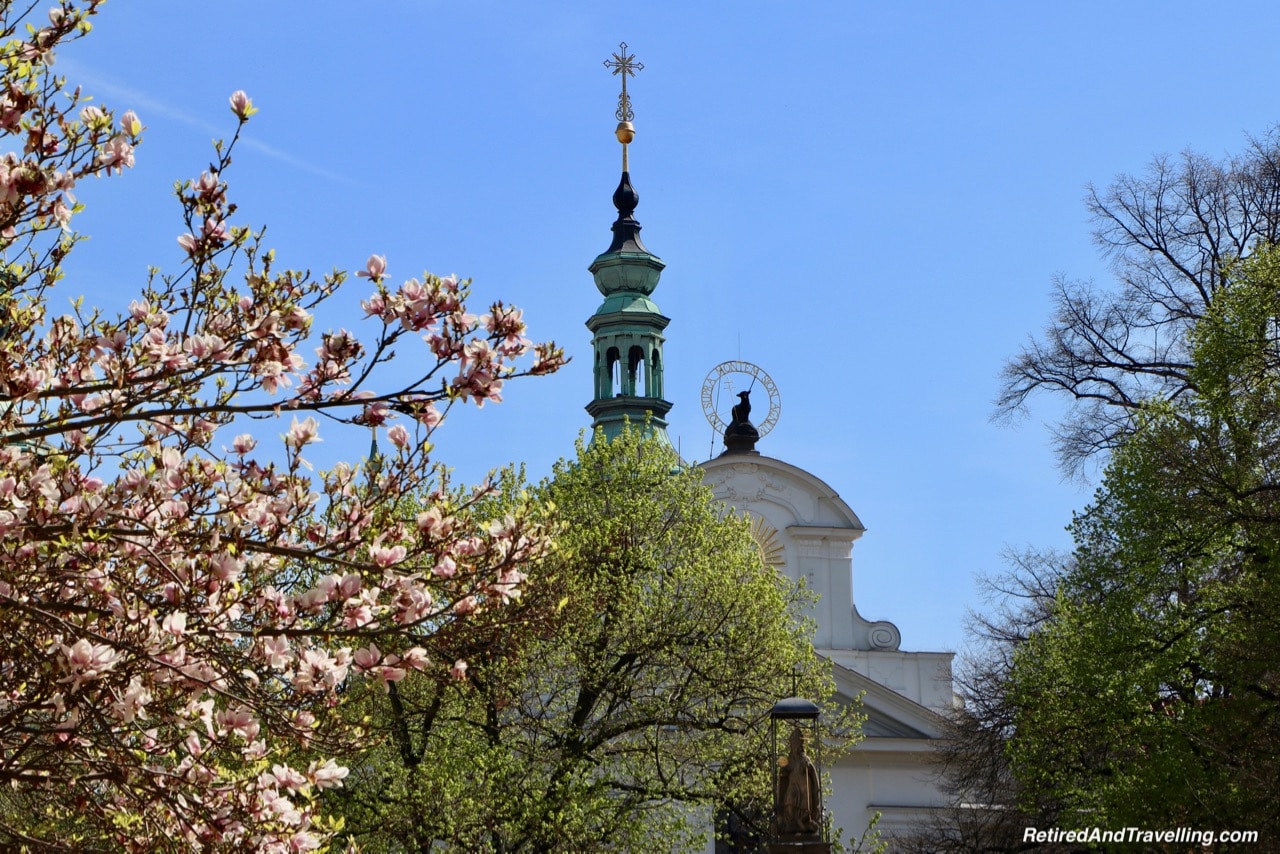 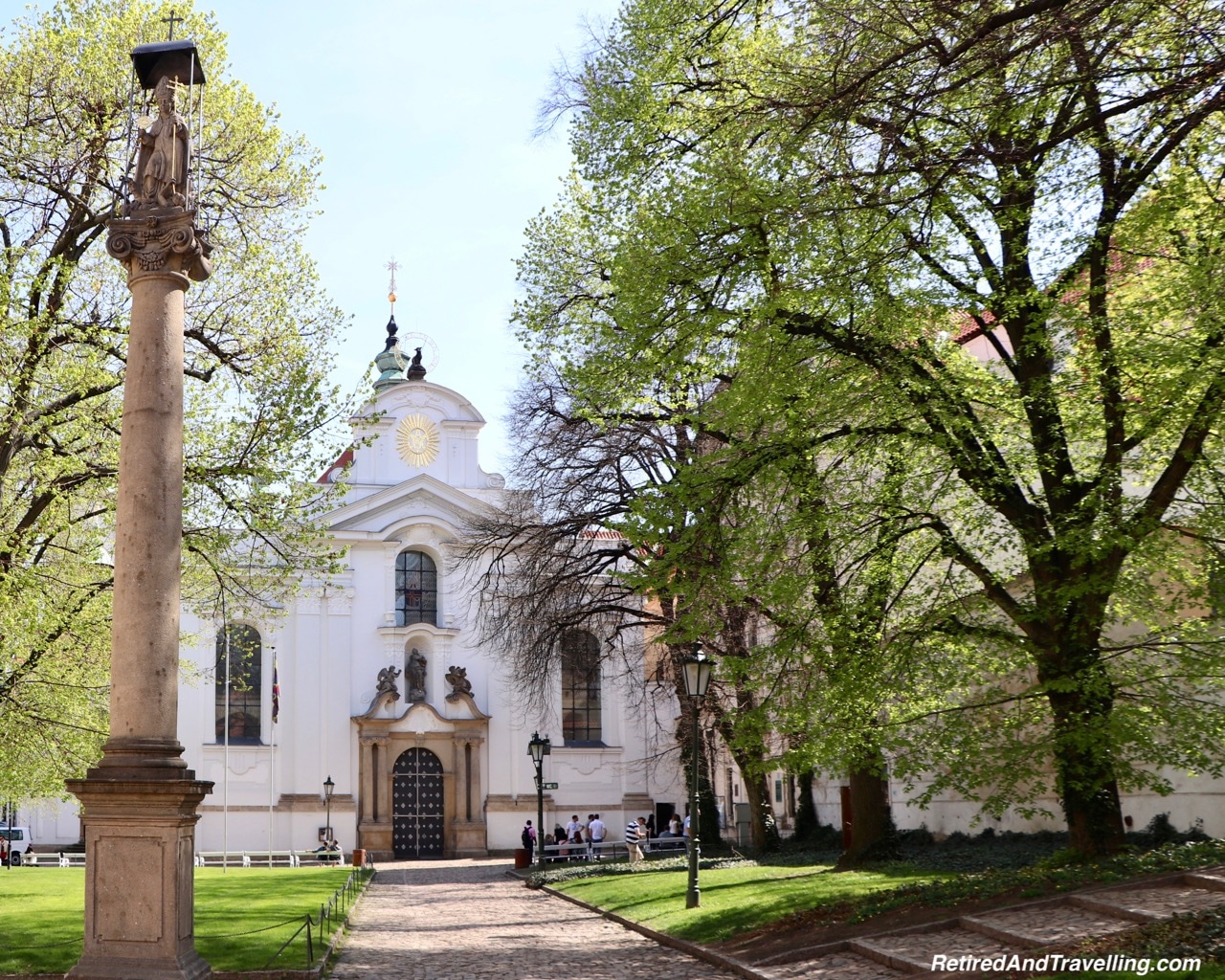 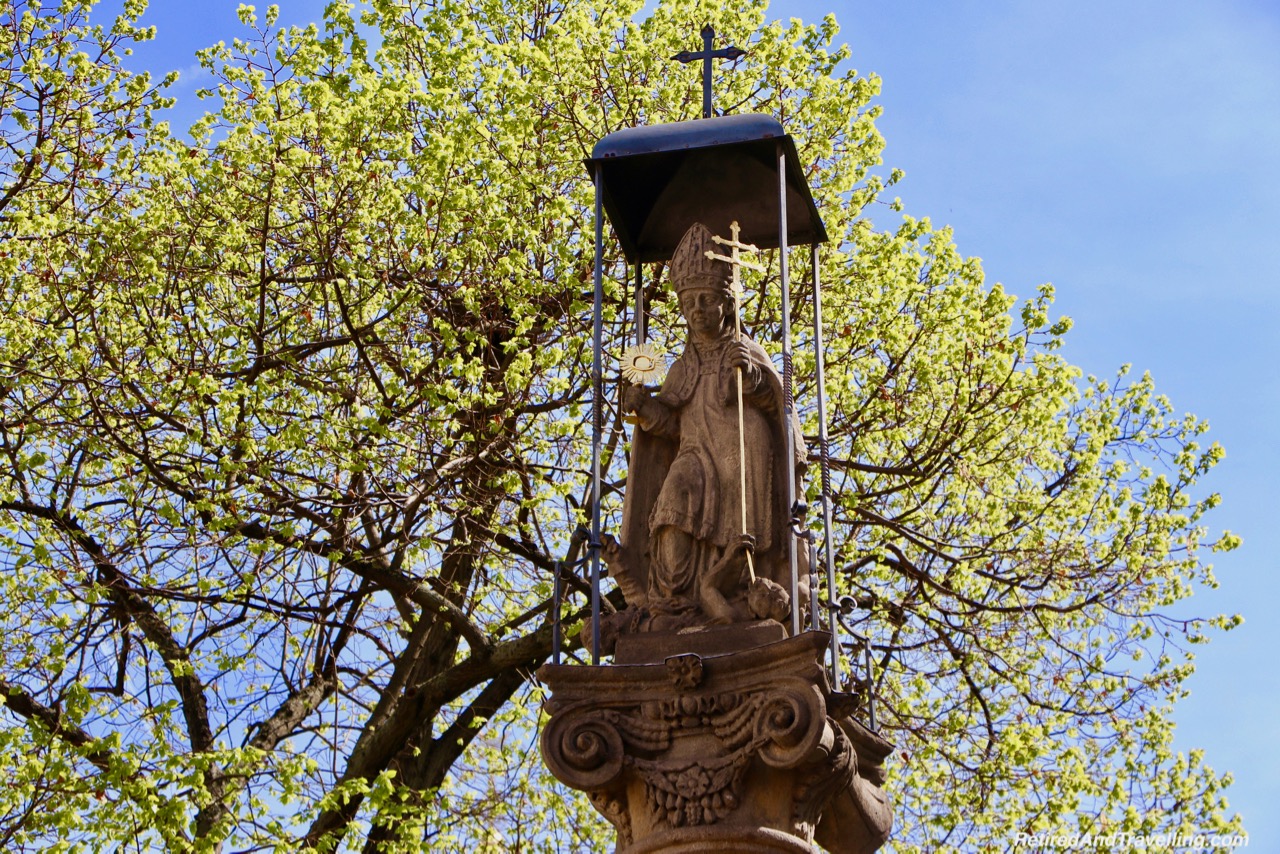 The city of Prague was full in spring bloom when we arrived. The temperatures were higher than normal for April. The blossoms reminded us of our short weekend in Washington DC a few weeks before we left Toronto. 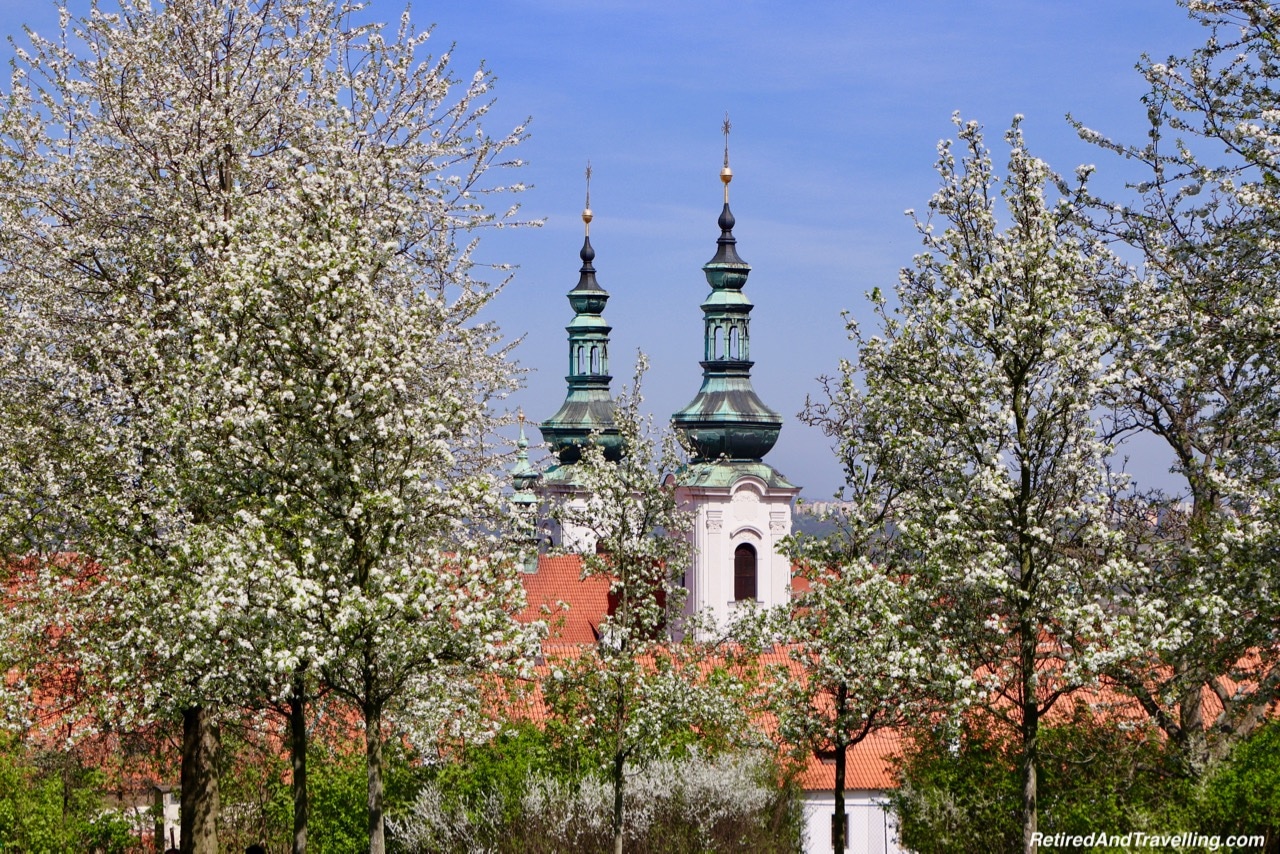 We wandered along the path towards the tower. There are other entrances to the park area from the streets if you take the subway and get off at another stop.

We could just see the Petrin Tower in Prague above the trees in bloom. 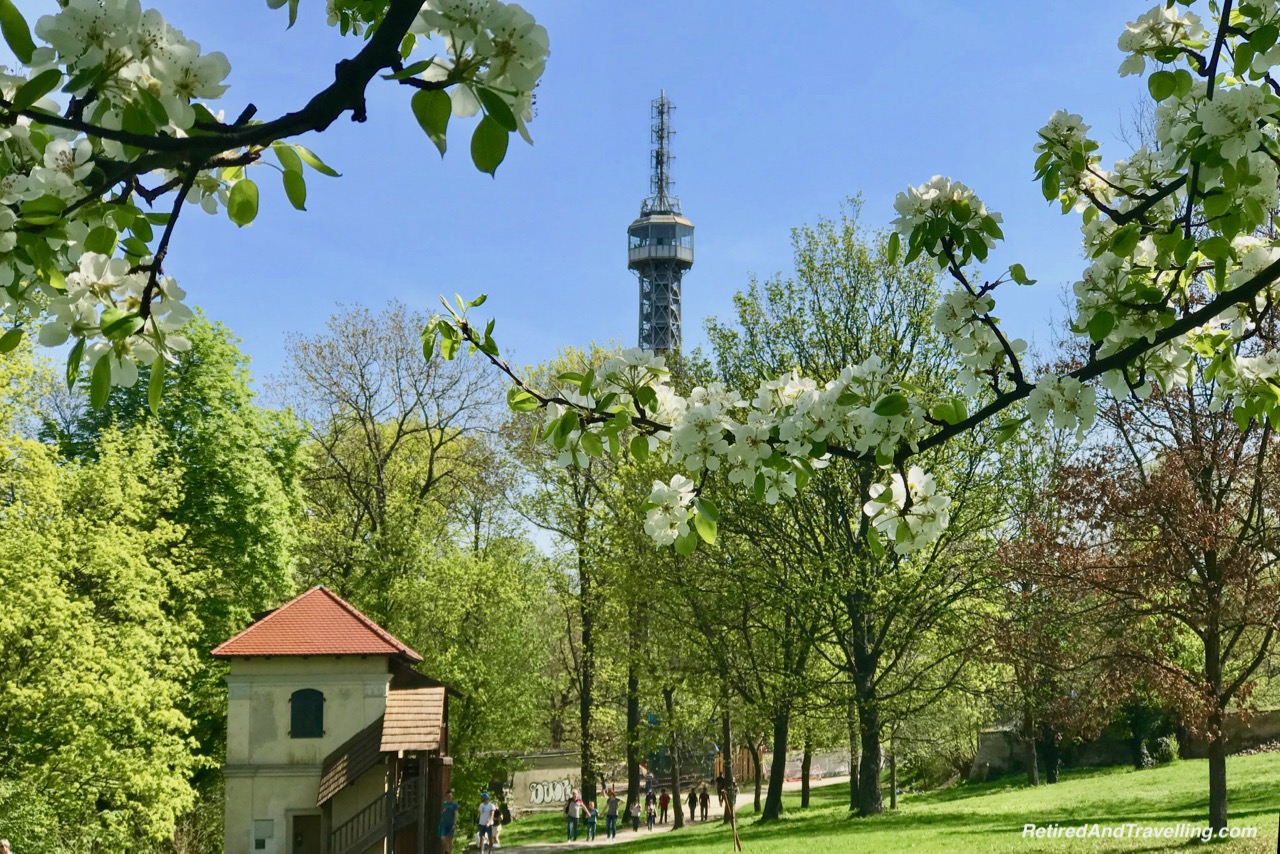 Going Up The Petrin Tower In Prague

We stood under the Petrin Tower and looked up. There were two different observation levels – one at 20m and one at 50m (165 feet). 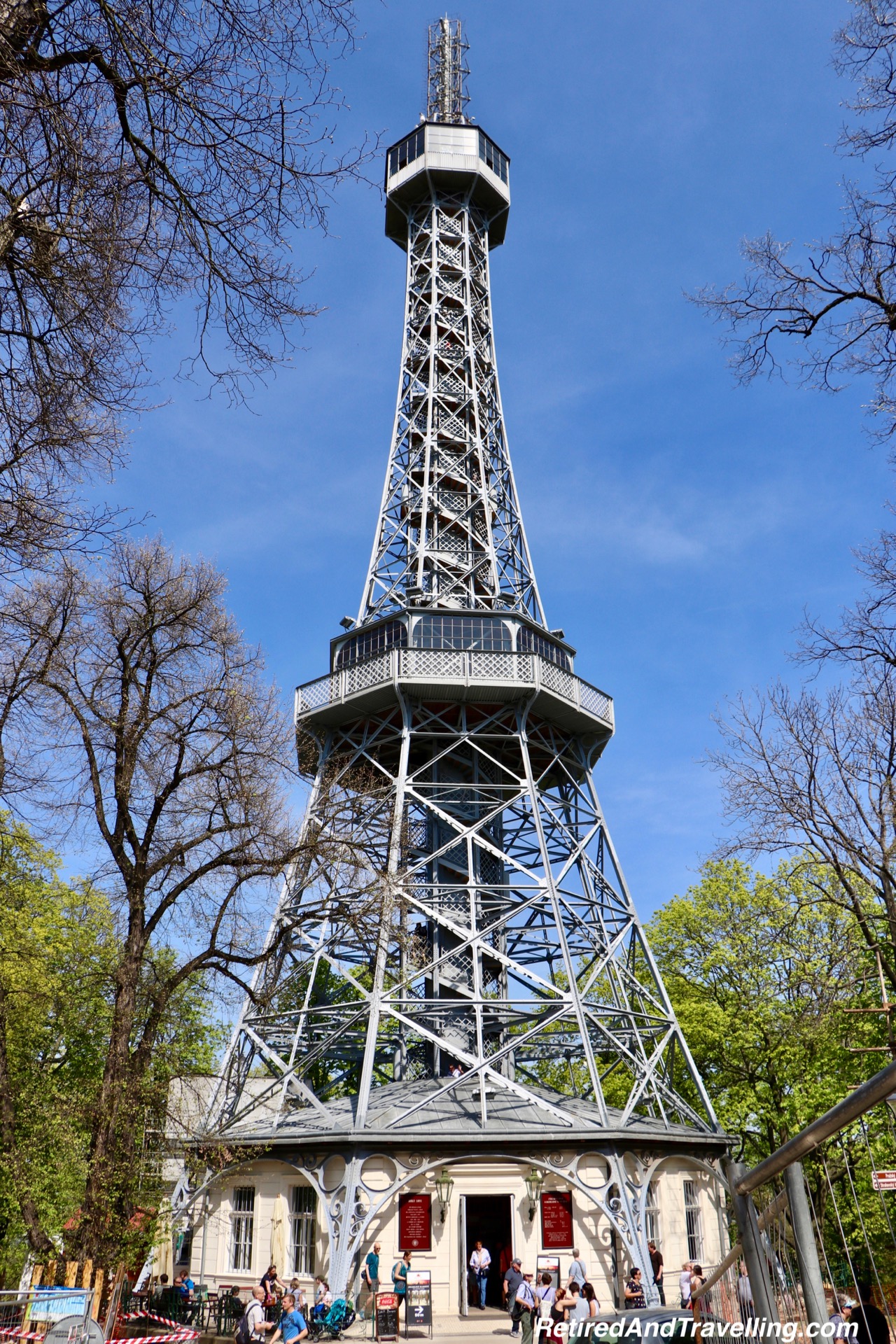 David went off to get tickets to go up. I wandered around and looked at the signage and history of the tower.

There were about 300 stairs to get to the very top. When David returned with tickets, we got put in a small line at the side. He jokingly said it was so the faster people could go up before me. It was a few minutes before I realized that he had bought the ticket for the small elevator. I really thanked him for that small reprieve once we got back to the hotel and realized how far we walked that day. The elevator ticket is about 1/3 more expensive than just walking up. But it was worth every penny we paid!

The Panoramic View From The Top

The small elevator took only 4 passengers and the operator. If you are claustrophobic, you should walk. We exited at the top to a very crowded platform that went around the top. We could feel the tower swaying. I could see it freaked out some people.

Most of the viewing platform had glass covering it. But every 15 feet or so there was an open window. People crowded the windows to get their pictures and views.

We walked slowly around to get a great panoramic view from the Petrin Tower in Prague. We looked back towards the Monastery. When we looked down the hill almost below us, we saw another smaller building that looked like a chapel. 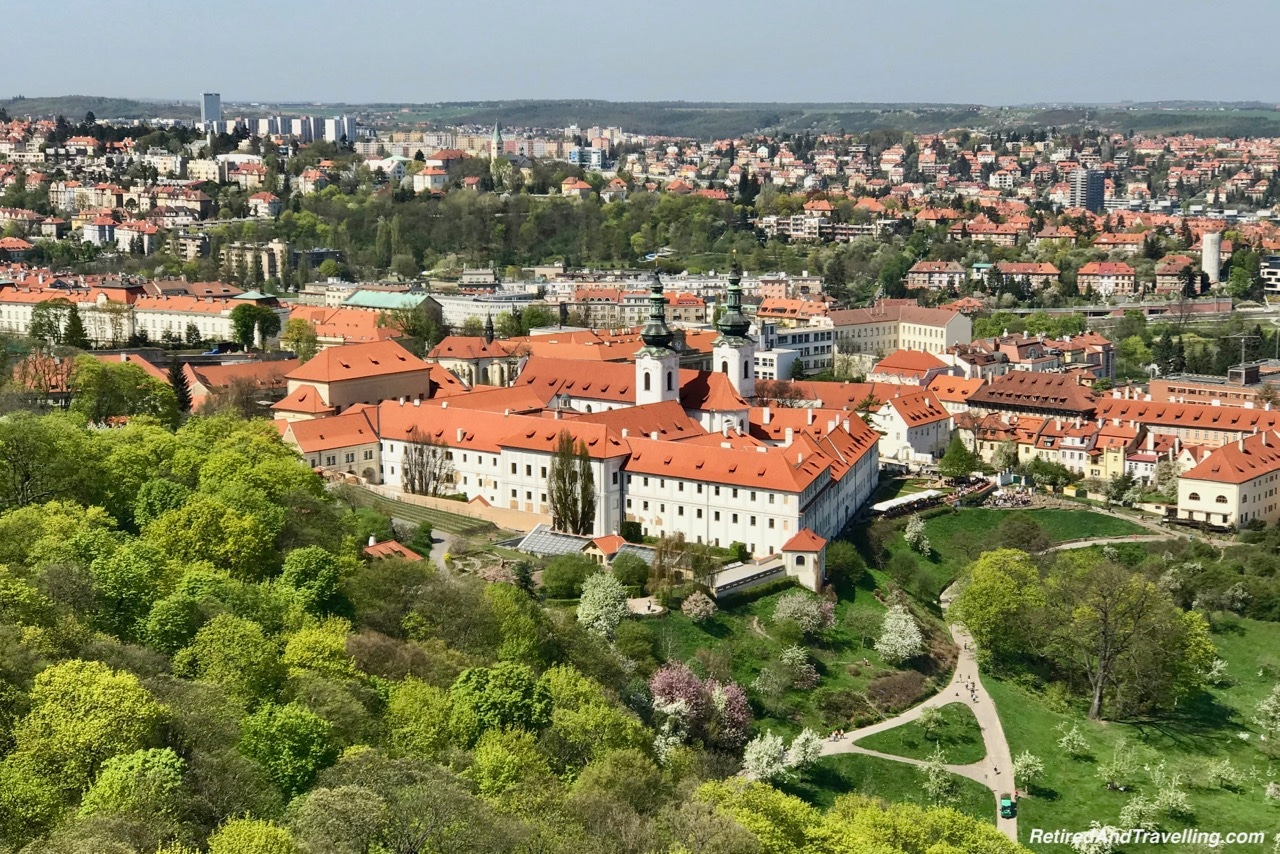 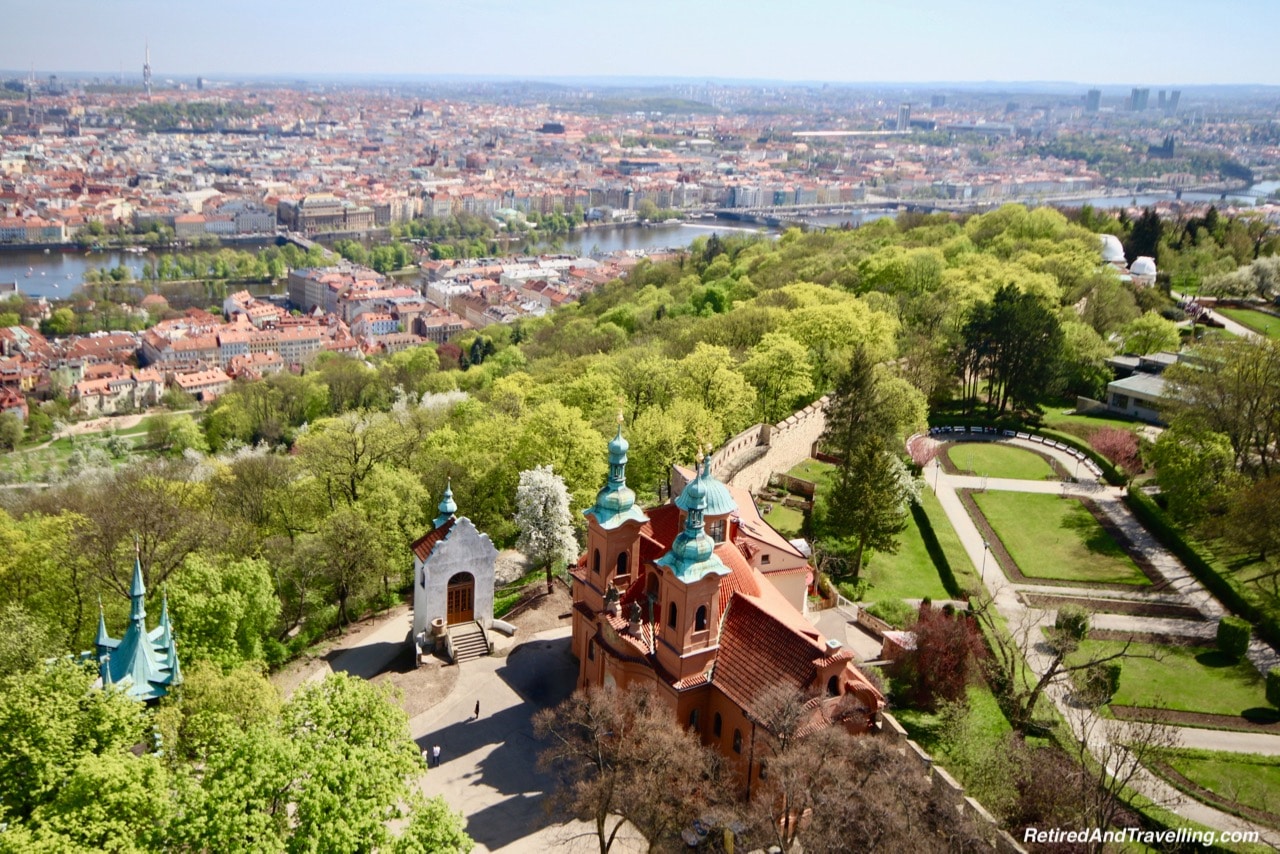 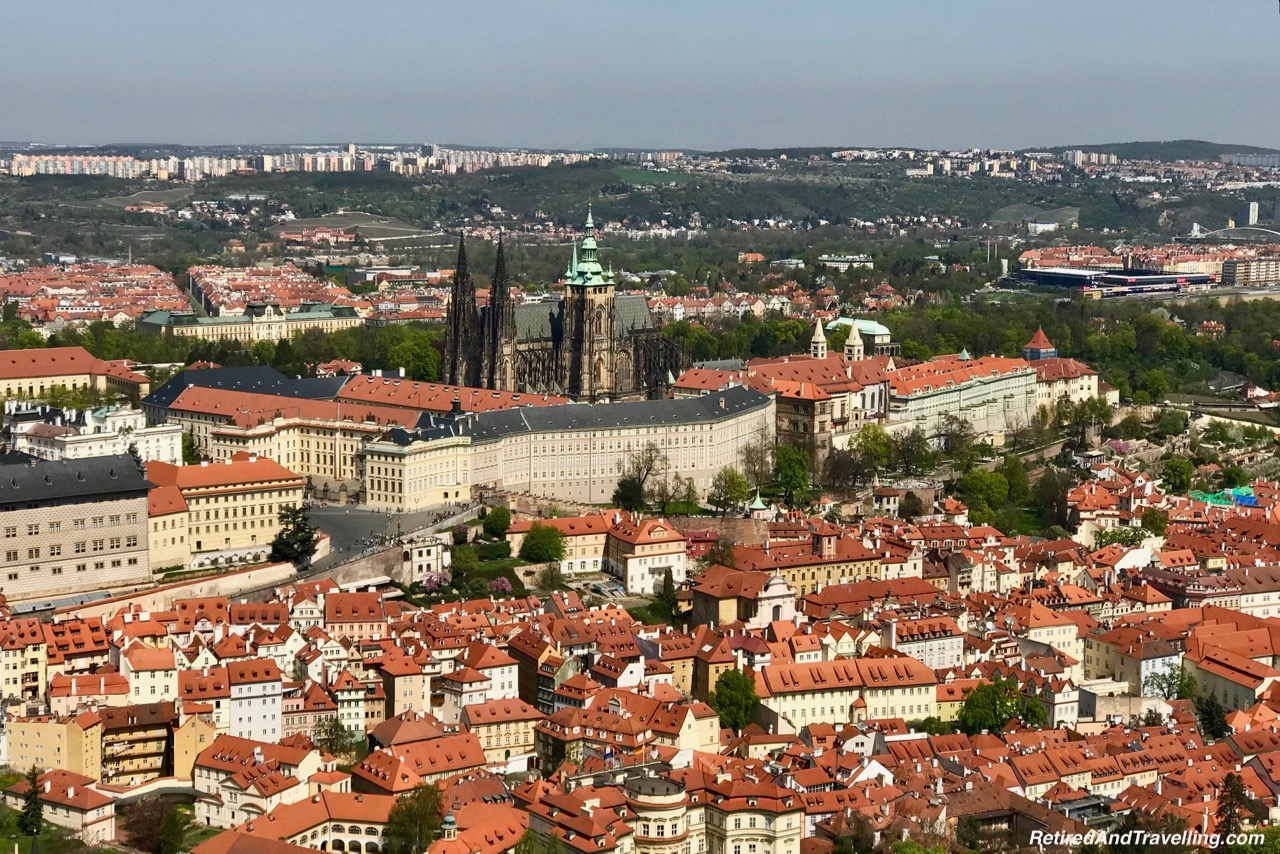 When we looked straight out, we got an awesome view of the Vltava River as it wound its way around Prague. On another day we cruised the Vltava River.  We easily the National Theatre with its gold trim and blue roof. We could just see enough of the Charles Bridge to tease us into a walk on the Charles Bridge.  Far off we could see the radio tower on one of the other hills. 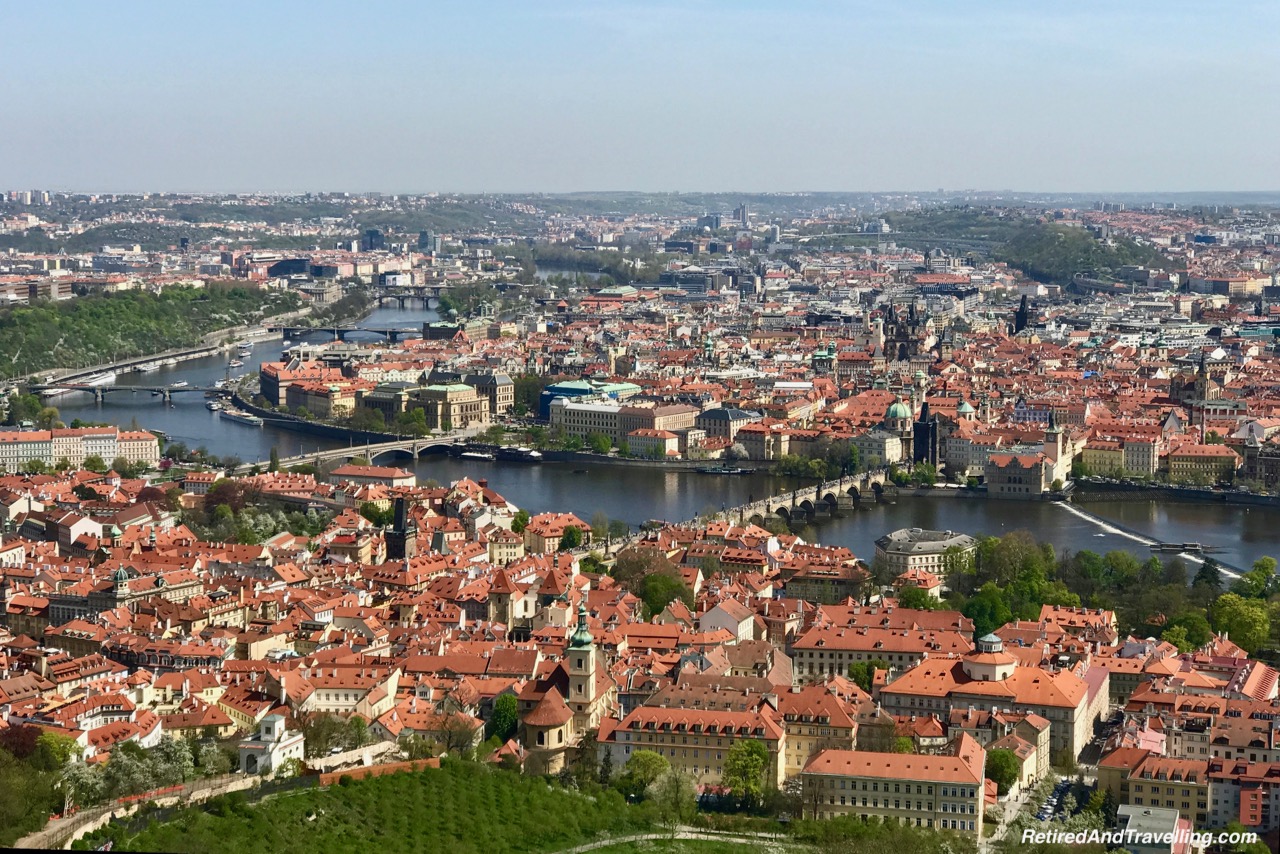 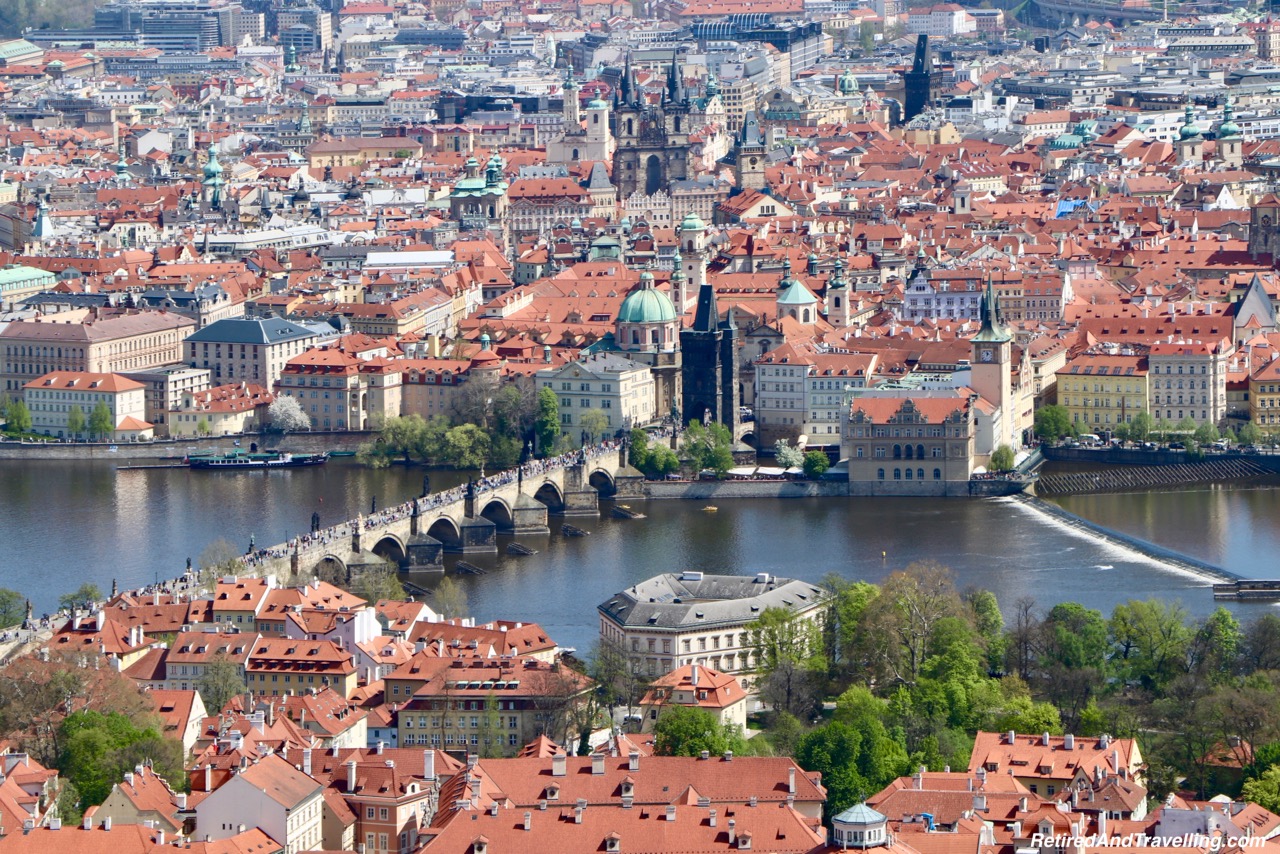 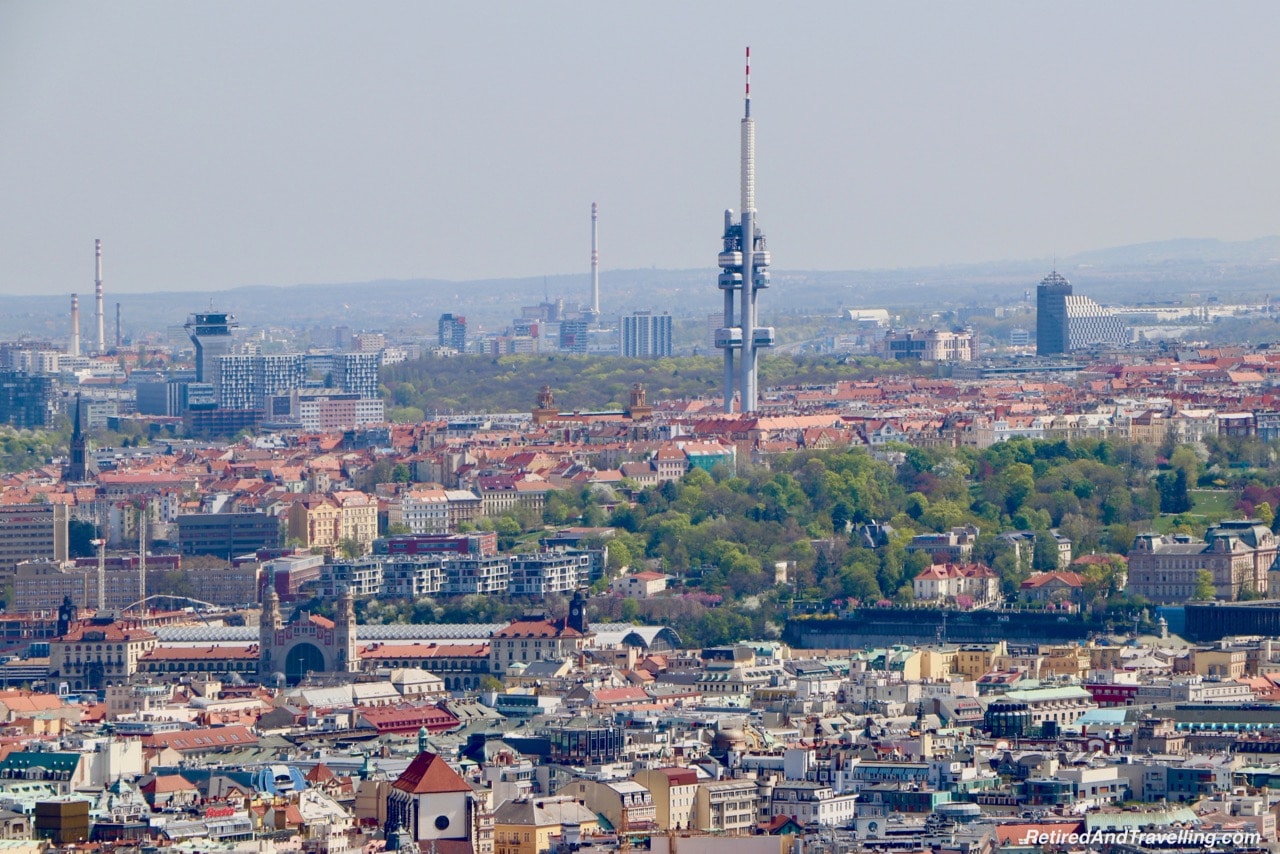 Every direction we looked we got yet another panoramic view from the Petrin Tower in Prague. This was the perfect way to get oriented to the city. We decided not to stop on the observation platform at 20m on our way back down, even though it looked like this was an open platform.

My plan was to retrace our steps past the Strahov Monastery and get back on the tram. Depending on how we felt, we might then get off the tram at the Prague Castle. David had other ideas. I figure that David’s sense of height got distorted when he was up in the tower. He claimed that a short walk down through the park under the tower would be a much faster route than re-doing the walk we followed on the way in.

I was not convinced but he seemed pretty sure of himself. By the time we walked down several steep paths and stairs, he conceded that even if it was shorter, it would not be easier. 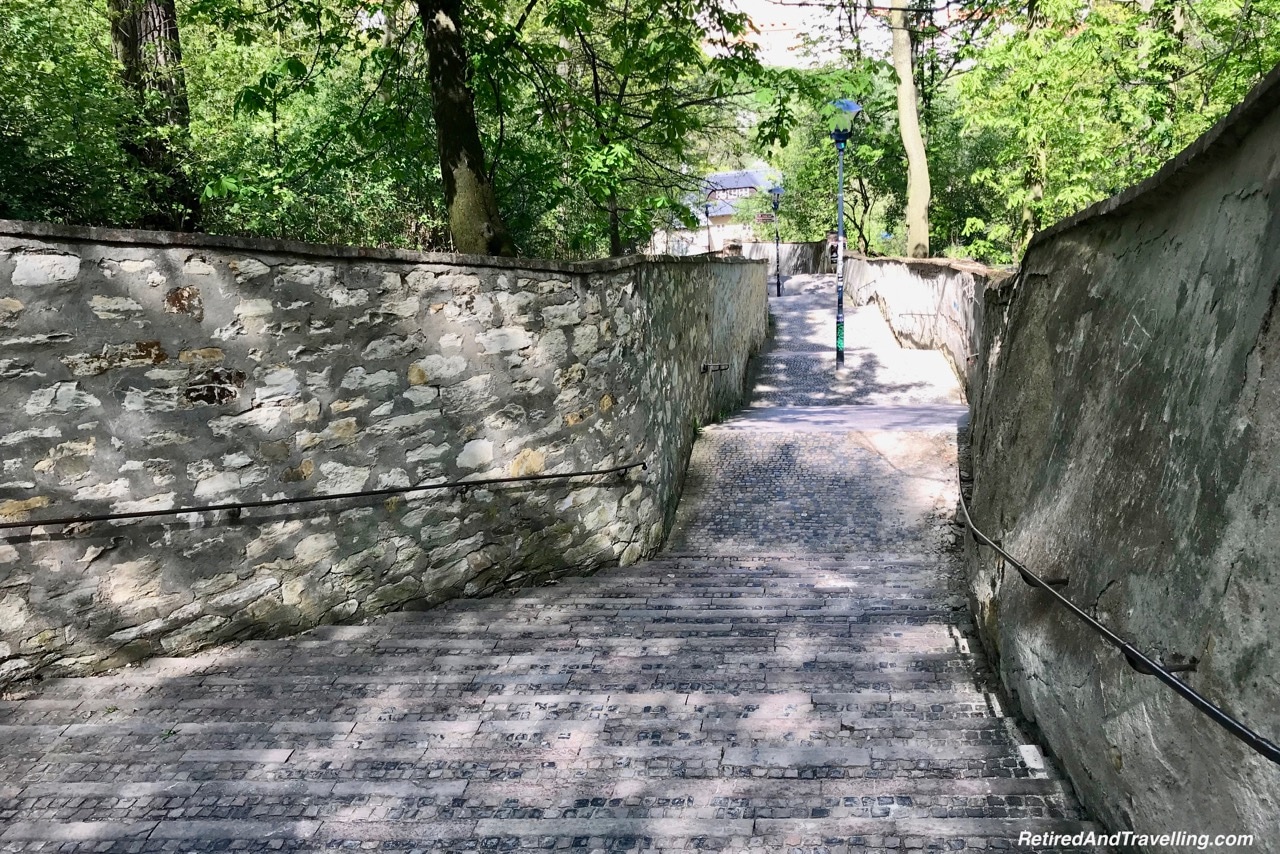 We kept going down and down. We could see the paths on our offline maps so we knew we were going in the right direction. But the distances were deceiving until you looked at the isobar lines for elevation. 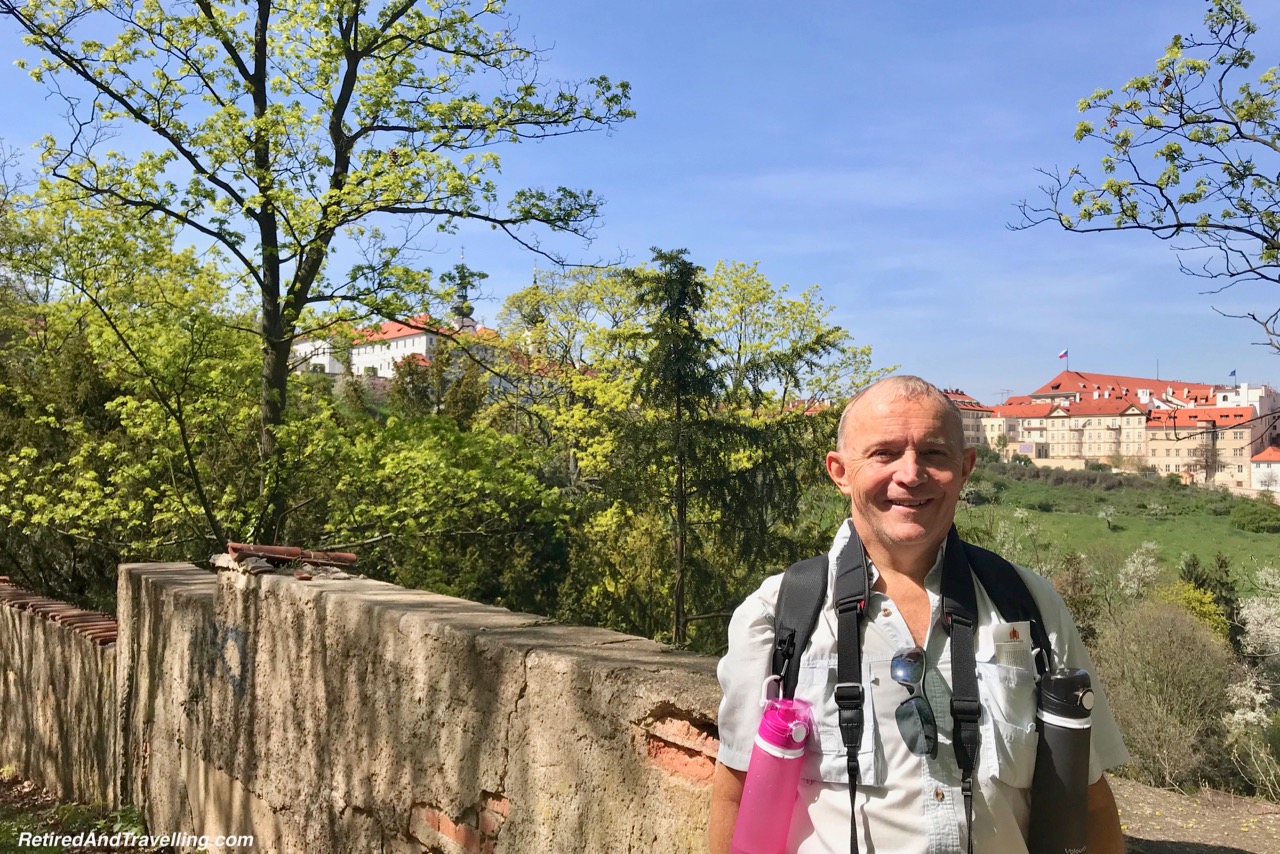 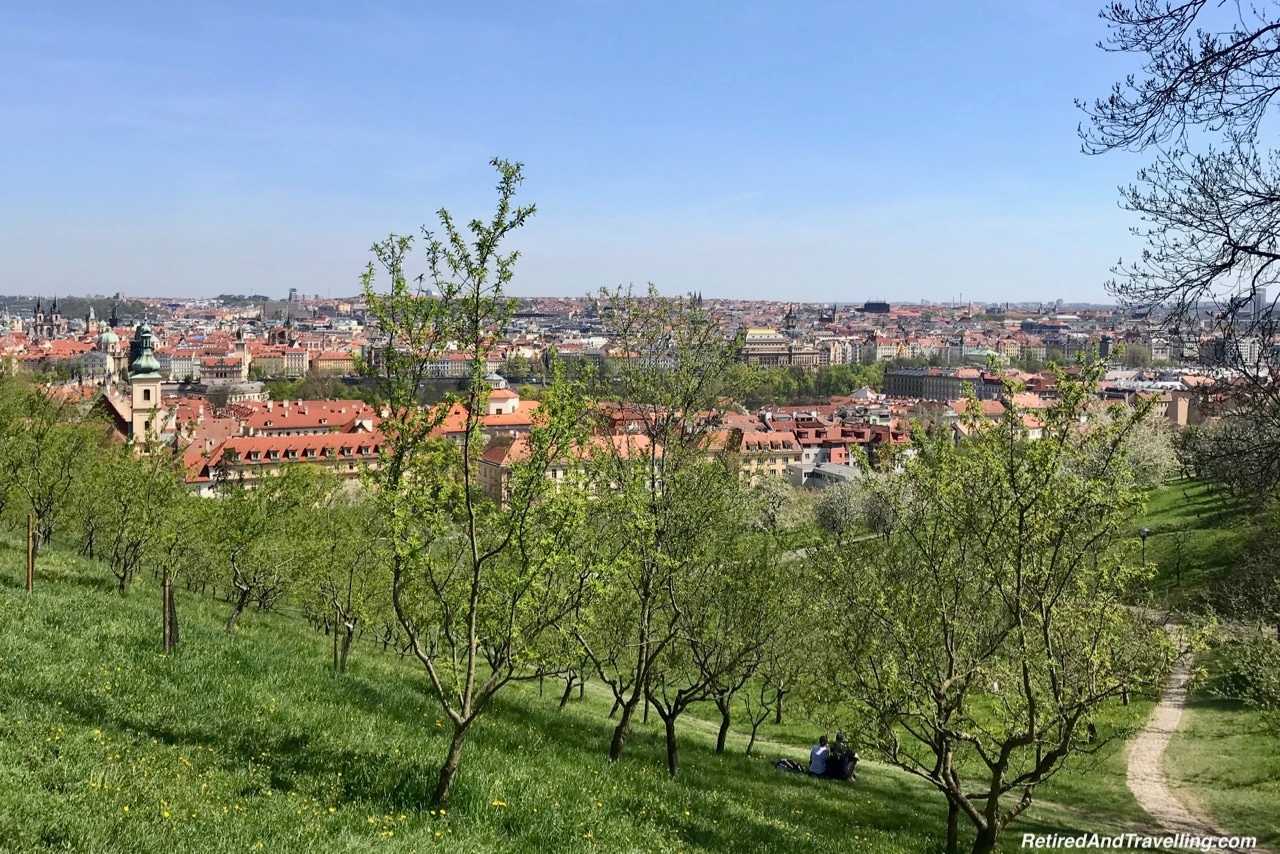 We finally got to the bottom and could see we were one street away from the main street to re-catch Tram 22. A short walk took us to the funicular. It was definitely not working. We were absolutely glad we had not walked up the path we took down. Of course, a few days later, the funicular was again in operation. 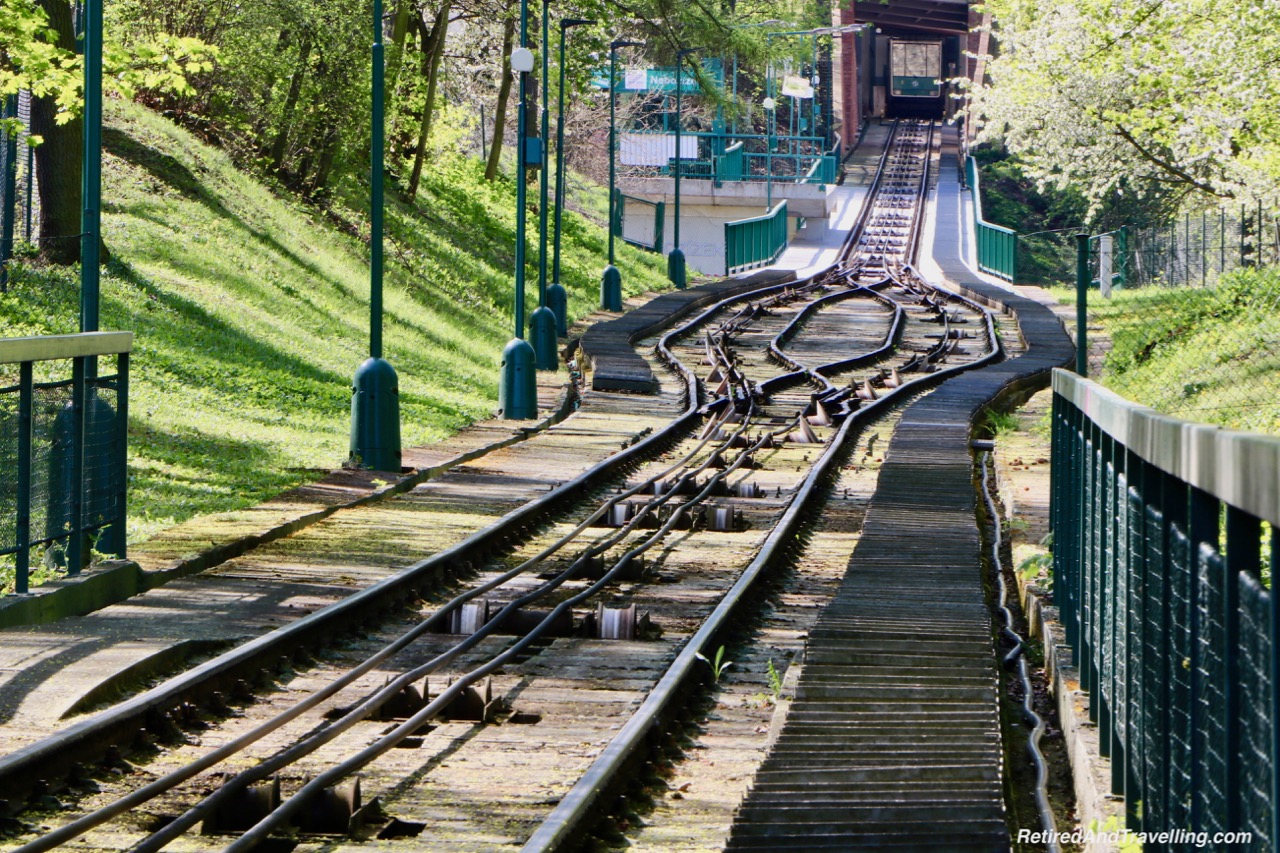 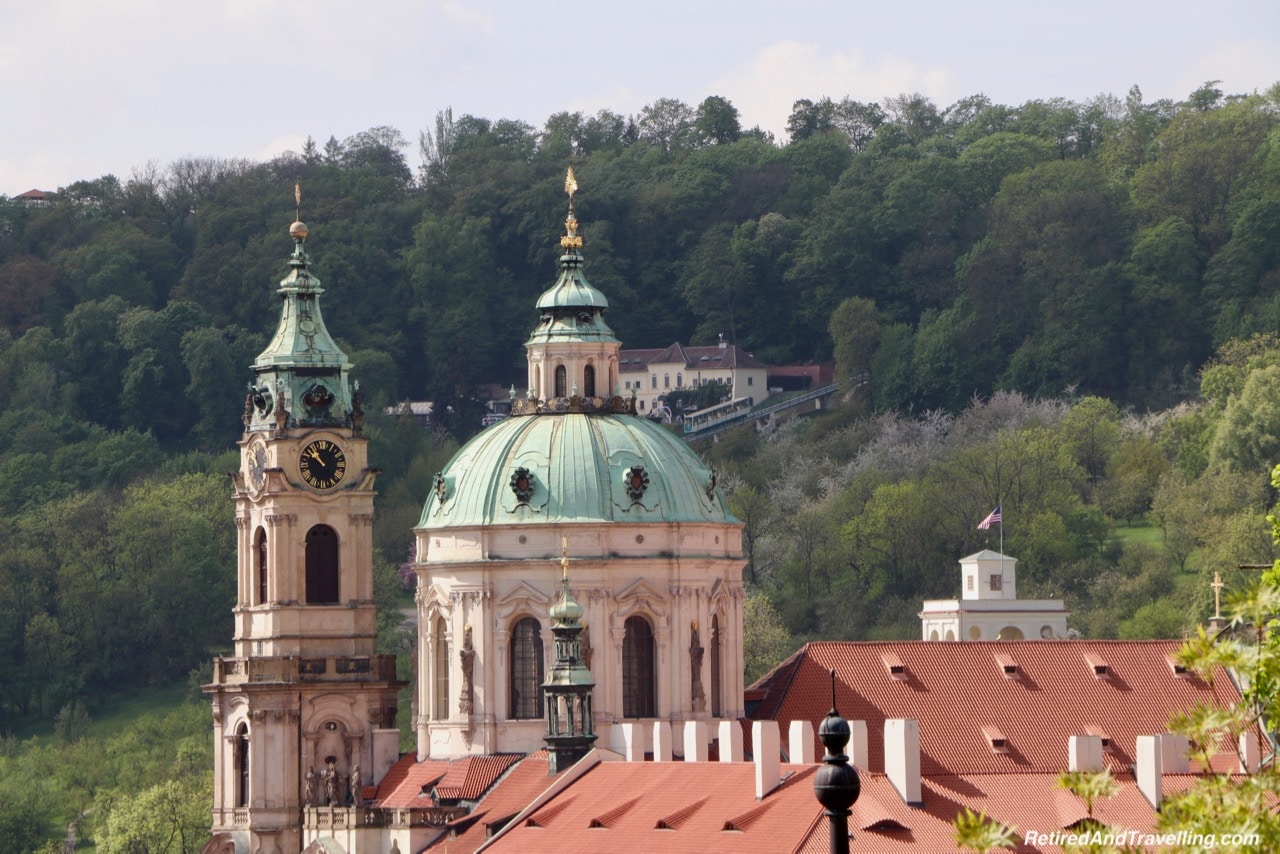 If you want to walk the path to the Petrin Tower in Prague, consider walking down. Unless you are looking for a workout.

Tracing The Path We Walked

We got the tram and made our way back to the hotel. At sunset we went up to the rooftop bar at our hotel. We had the best view from there of the amazing buildings and architecture of Prague. David’s zoom lens gave us our first view of some of the iconic sites in Prague. 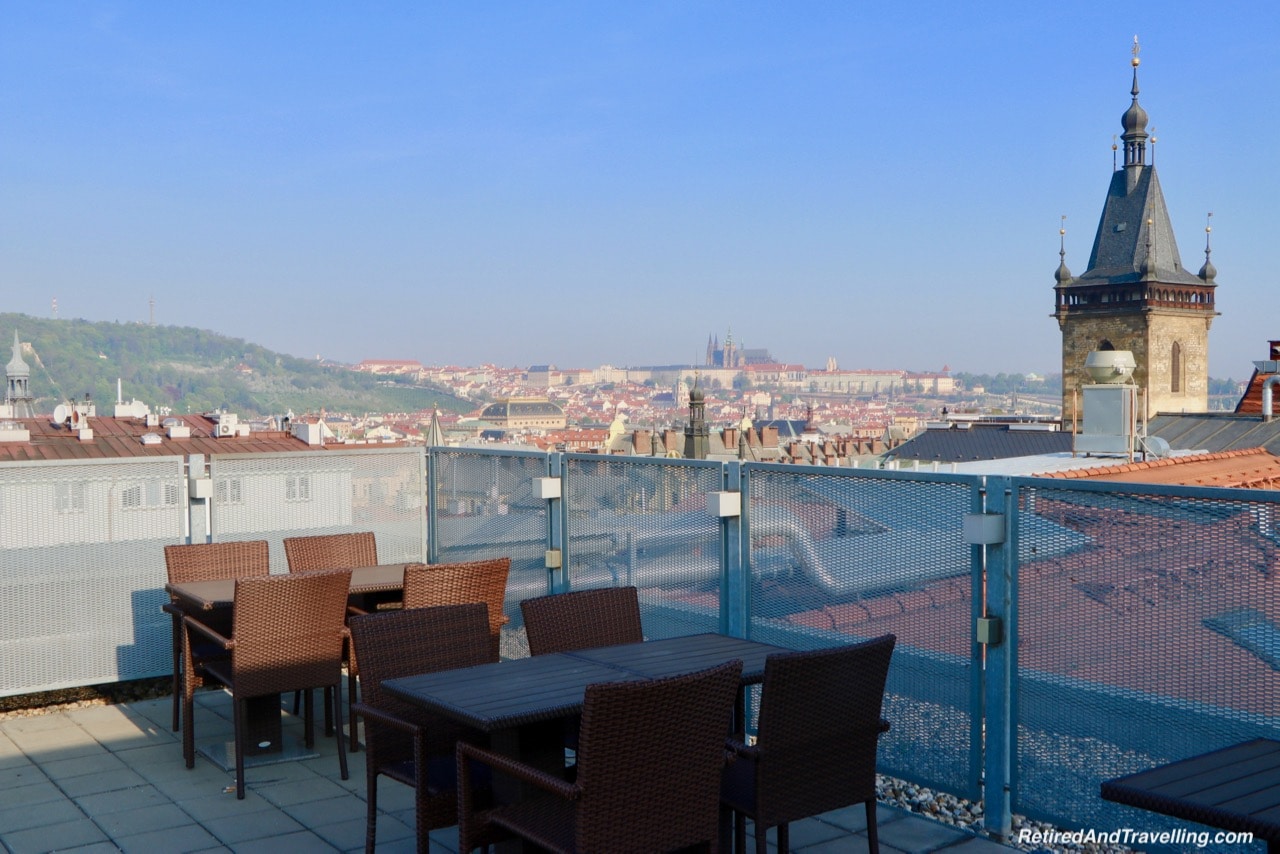 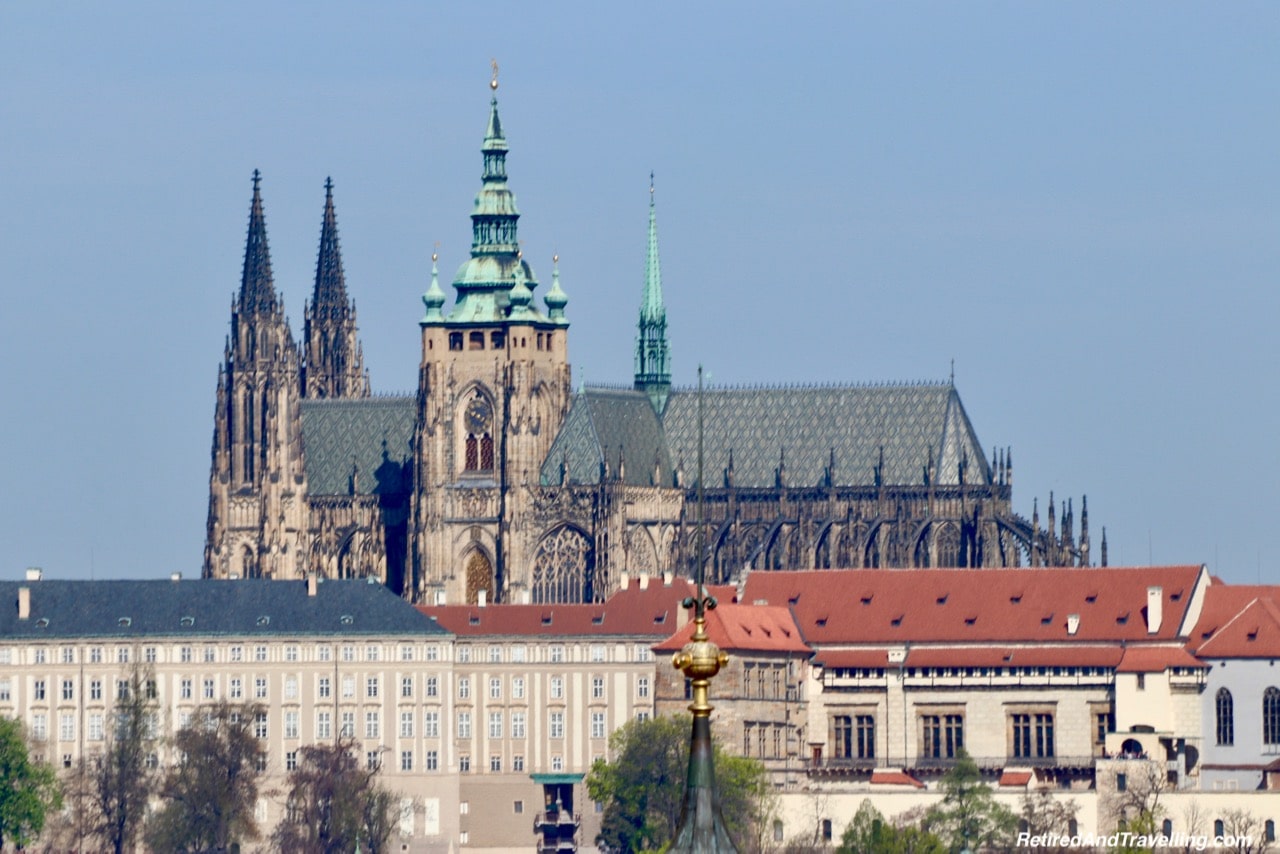 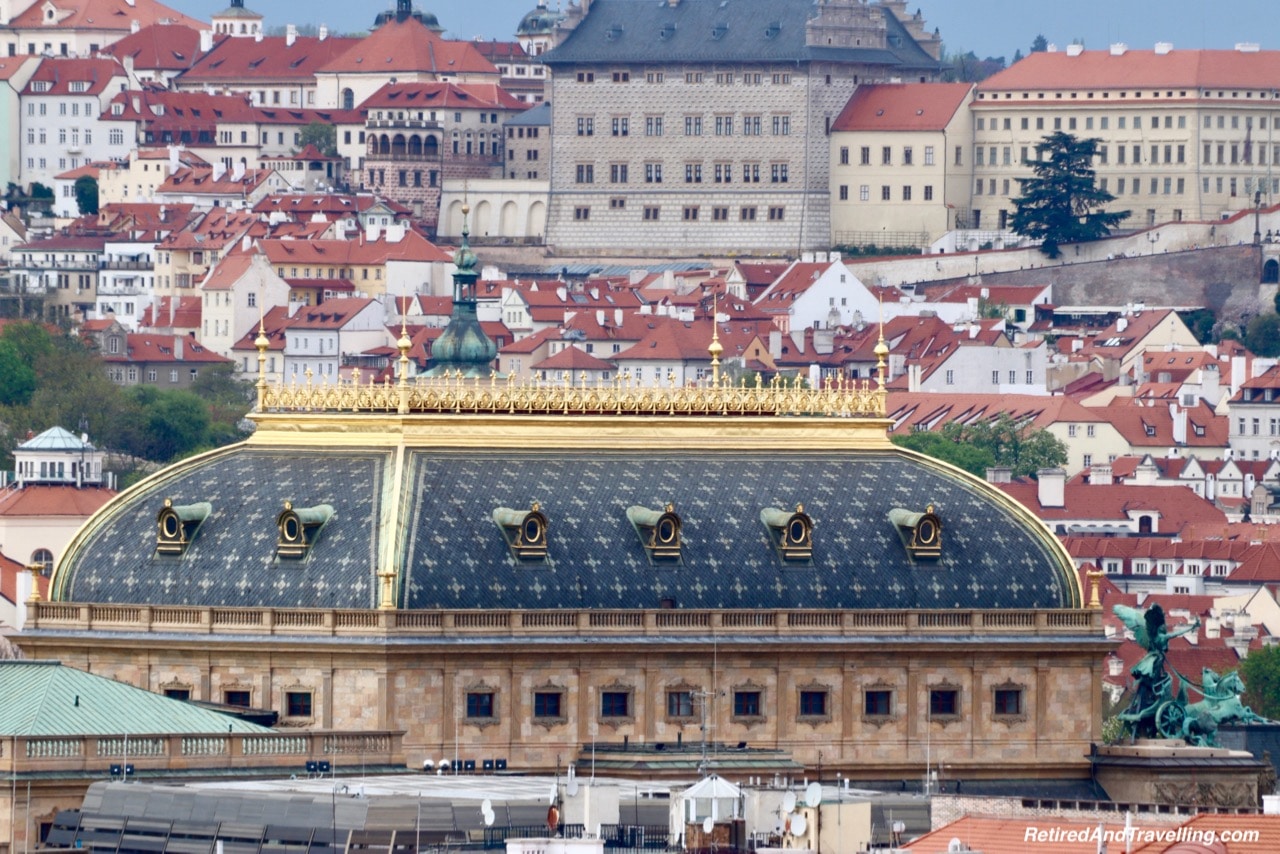 Directly in front of us we could see the hill with the Petrin Tower in Prague. With the zoom lens, we could just make out the funicular path and knew where we had walked down. The sun set directly behind this hill. Off to one side we saw the Prague Castle and the St Vitus Cathedral. 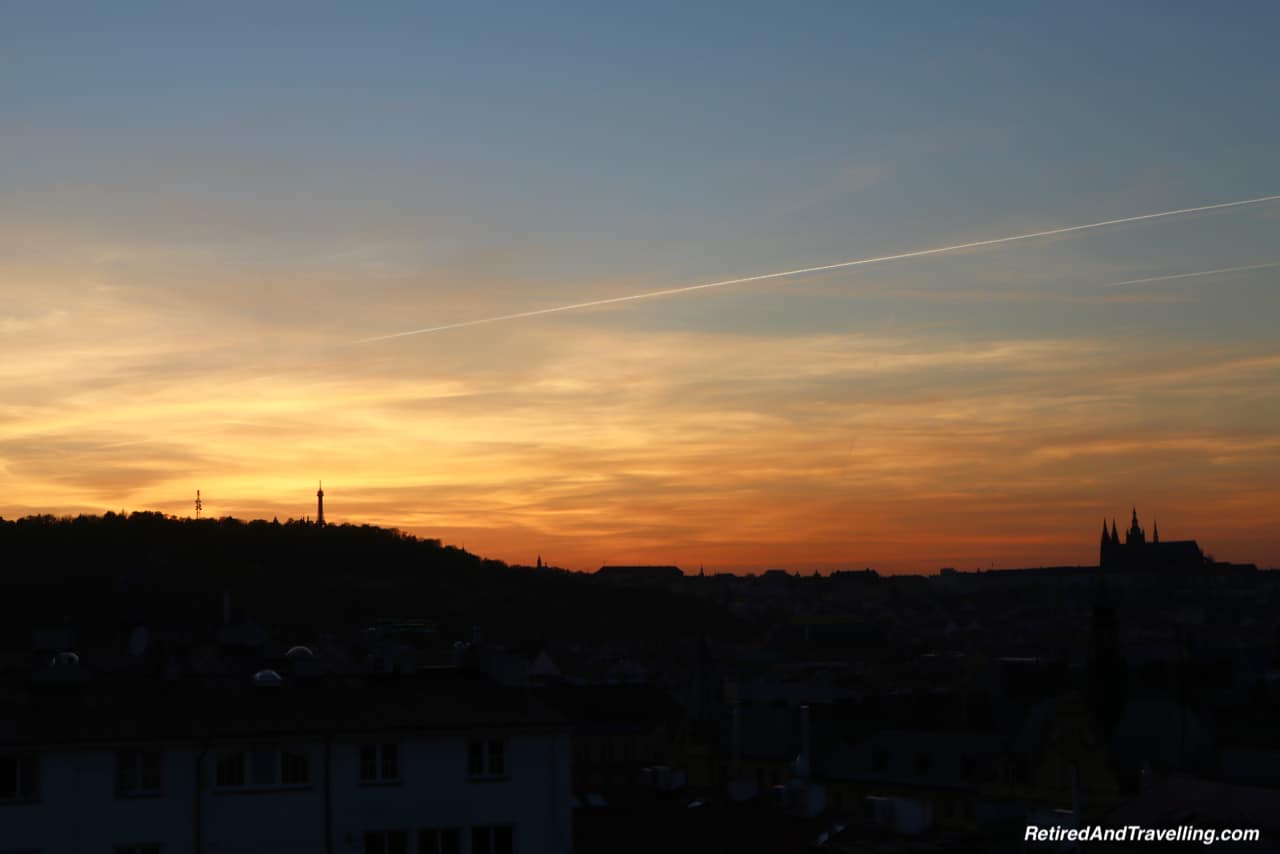 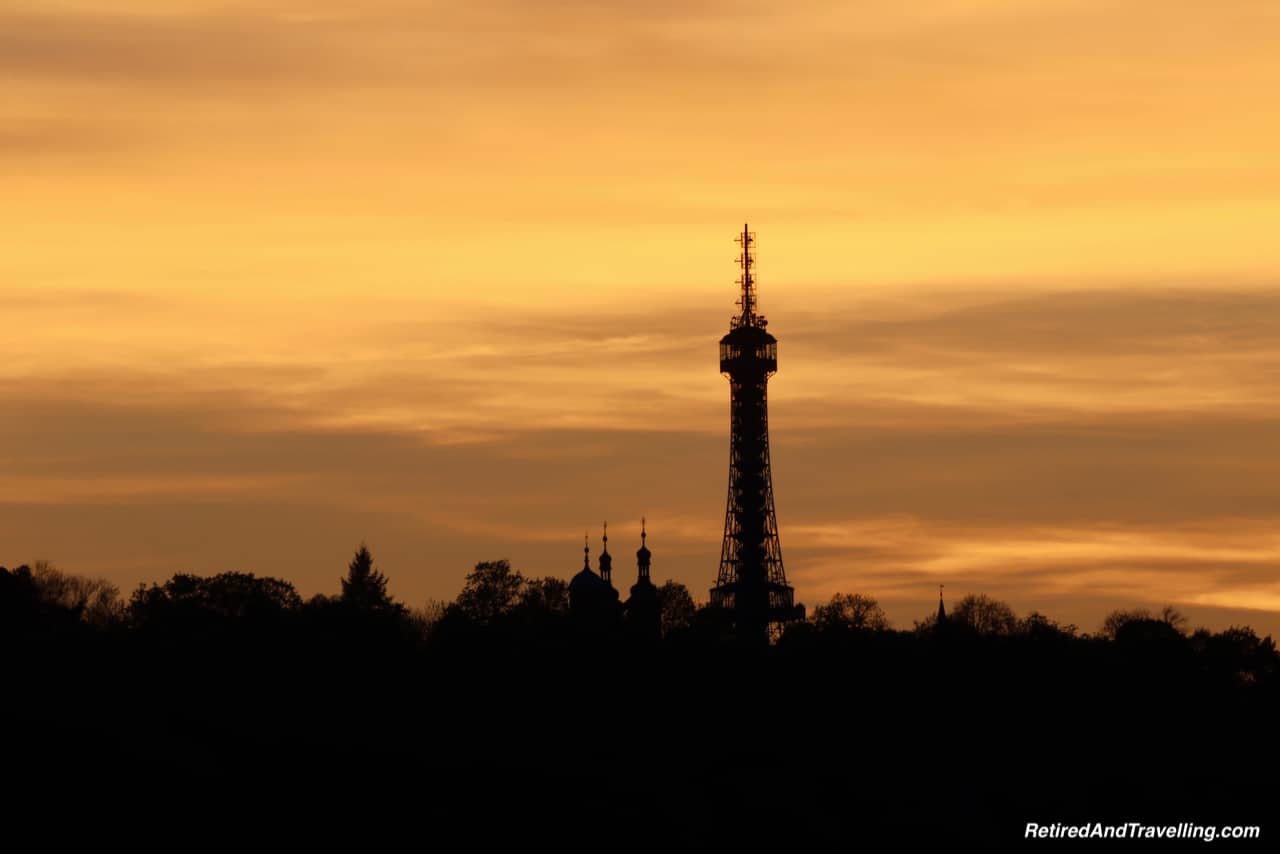 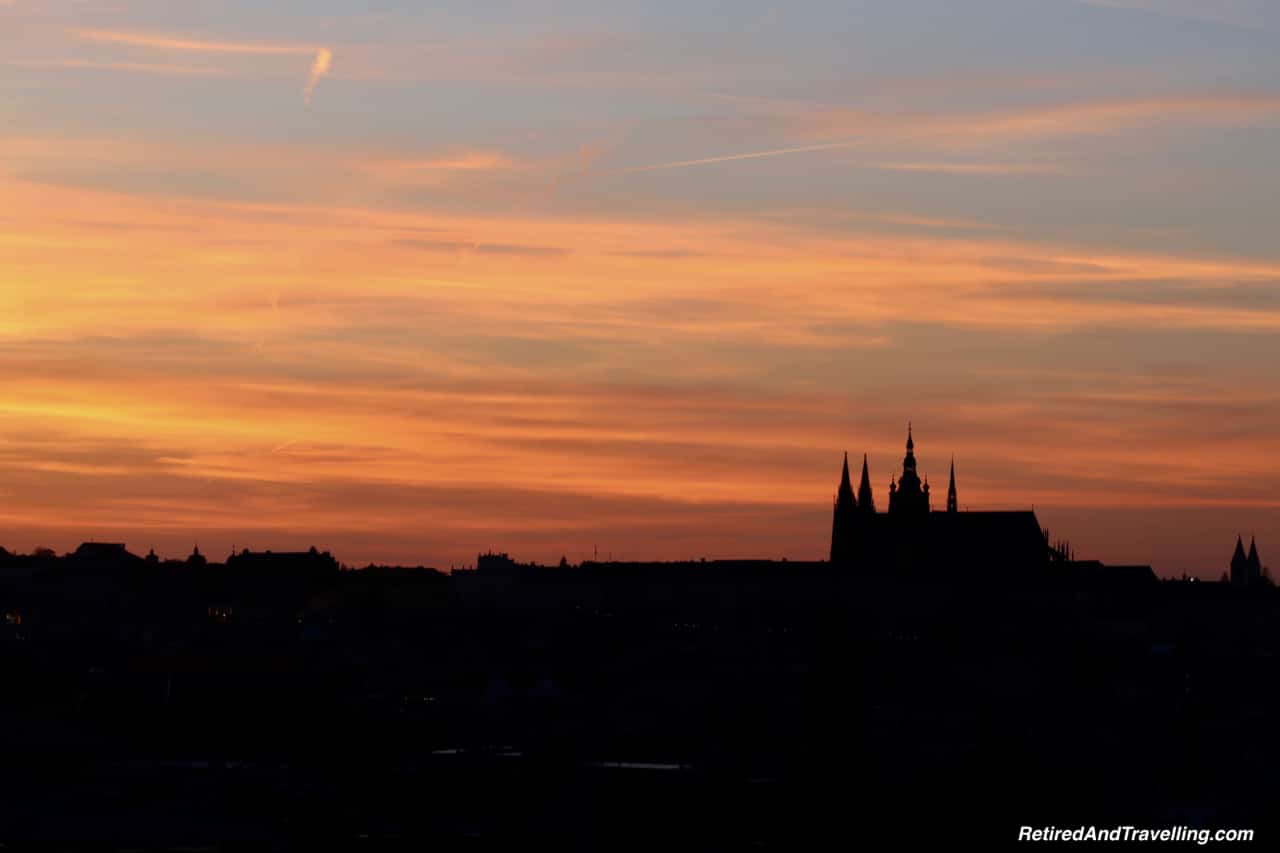 A few hours later it was dark and the view was even more spectacular. Everything was lit and sparkled in the night. After our visit to the Petrin Tower in Prague, it was great to get this second panoramic perspective. 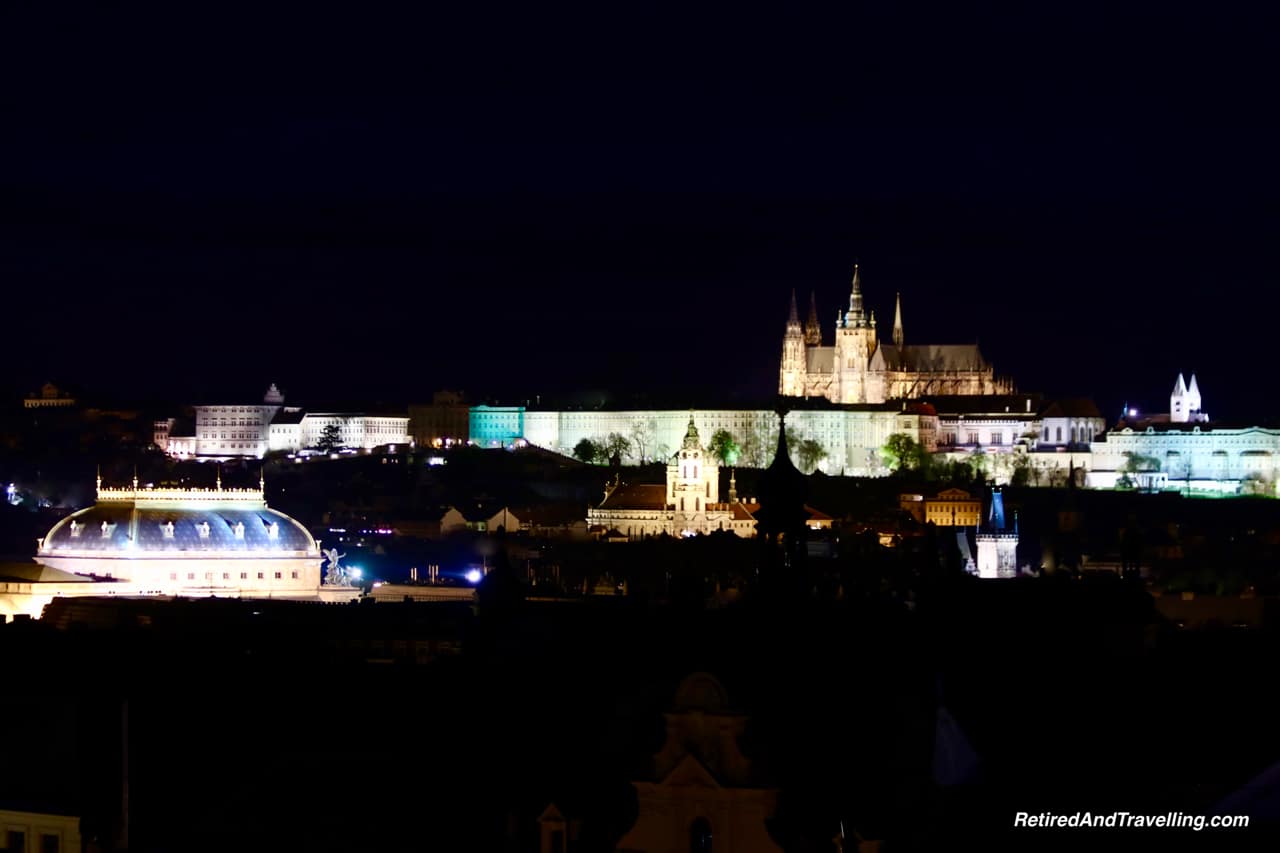 We were so glad we started our visit with a trip to visit the Petrin Tower in Prague. The panoramic views from the top gave us a great orientation to the city. We pinpointed many of the key sights. And it helped a little in planning our 8 days in Prague.

We got very lucky to have a rooftop terrace at the Sheraton Prague. This gave us a view of where we had visited during the day. But also gave us another panoramic perspective of the city. We had other high spots in Prague on our to do list. But that first view was a great way to start.

Have you see the panoramic view from the Petrin Tower in Prague? Did you find the perfect spot for sunset and after dark to see the city from on high? 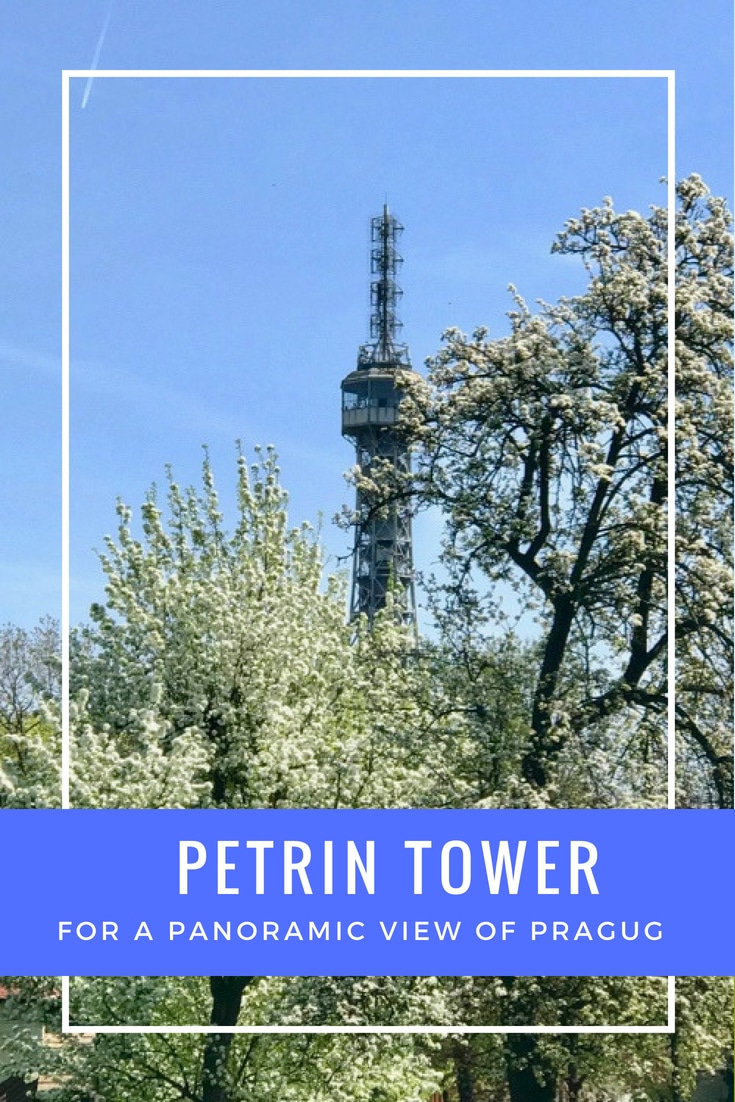 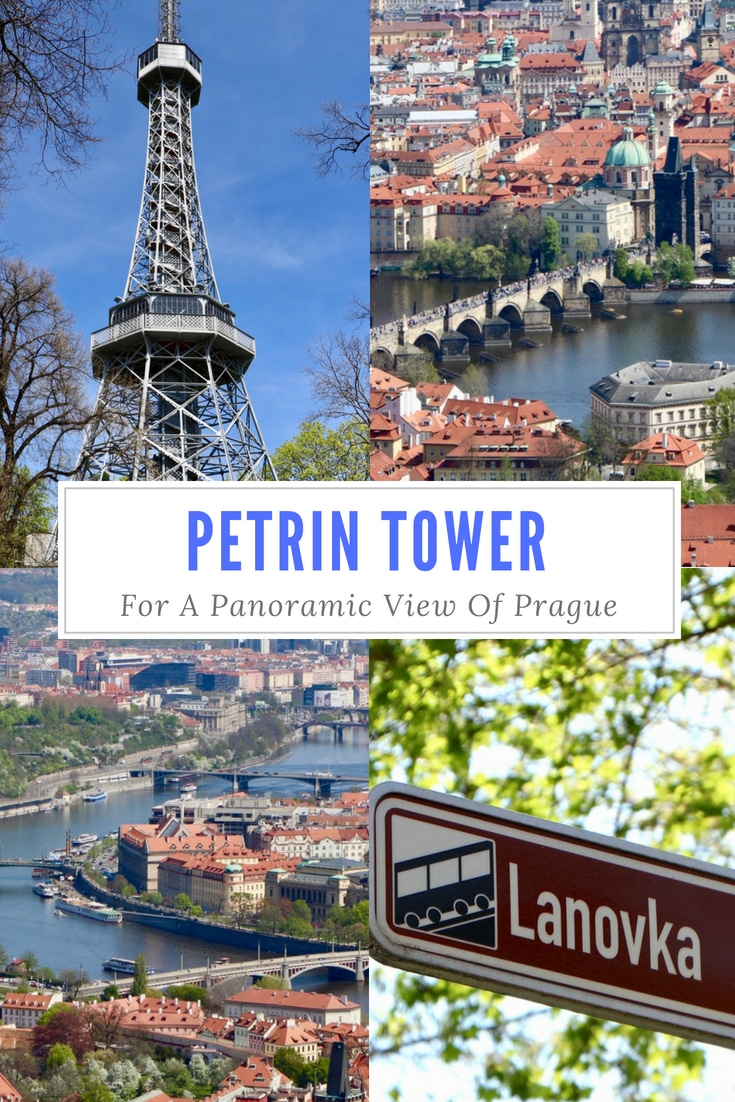