We stayed in the Douro River Valley with a great view overlooking the grape terraces. One day we headed back out on the twisty road hugging the hills. We planned to explore the areas around Sobrosa and Vila Real. There was one stop we had to make on this day trip. We wanted to visit the Mateus Palace but were not prepared for how stunning this would be!

The Mateus Palace was just outside of the small town of Mateus. You can pay for parking inside the grounds. Most people just parked on the road. But we found a spot in the bus parking area. There are tickets for just the gardens or ones that included a tour of the palace. We explored both the gardens and the palace.

As we came up to the palace, we saw the palace with a great reflection in the pond. Moving closer we could catch the classic image that adorns Mateus Rosé wine bottles. We saw so much art and architecture on our visit to Porto. But this still caused us to stop and stare. 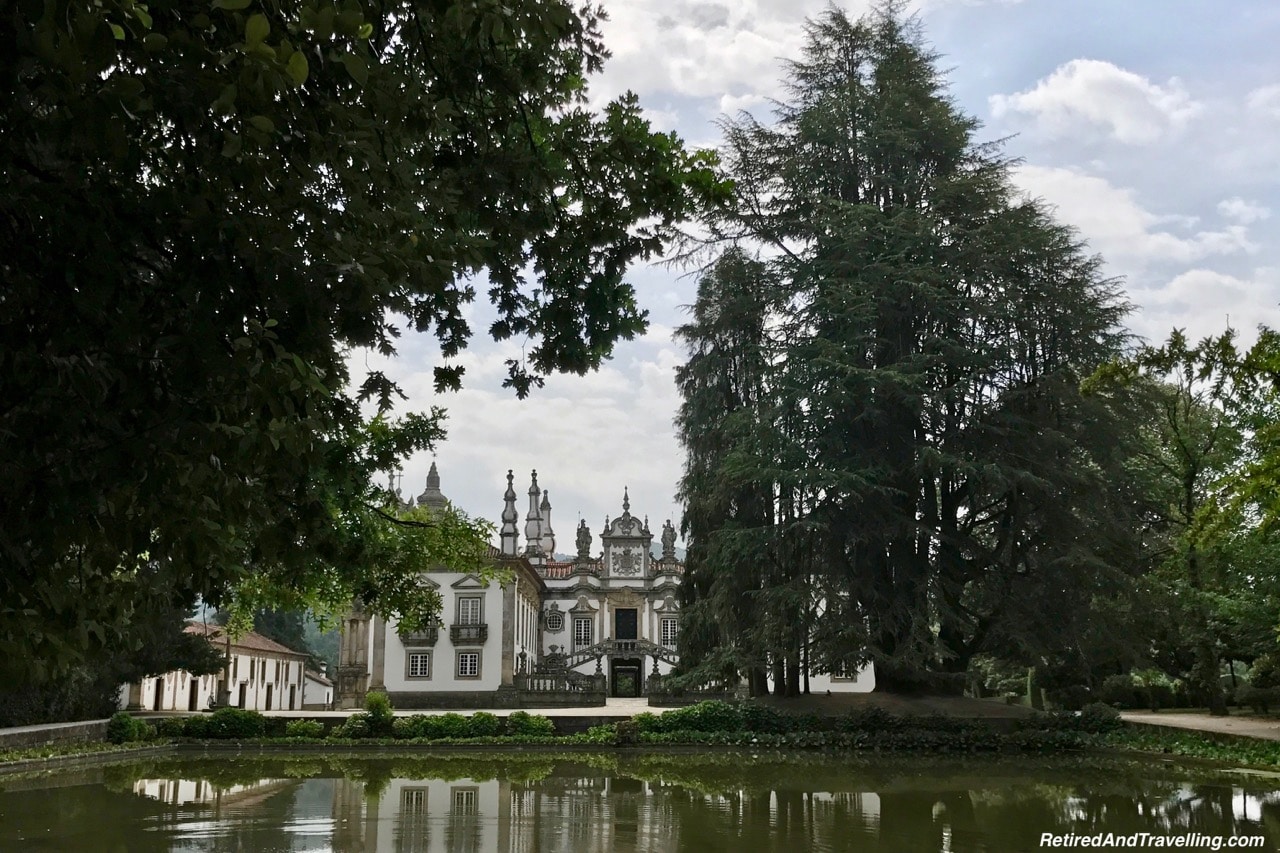 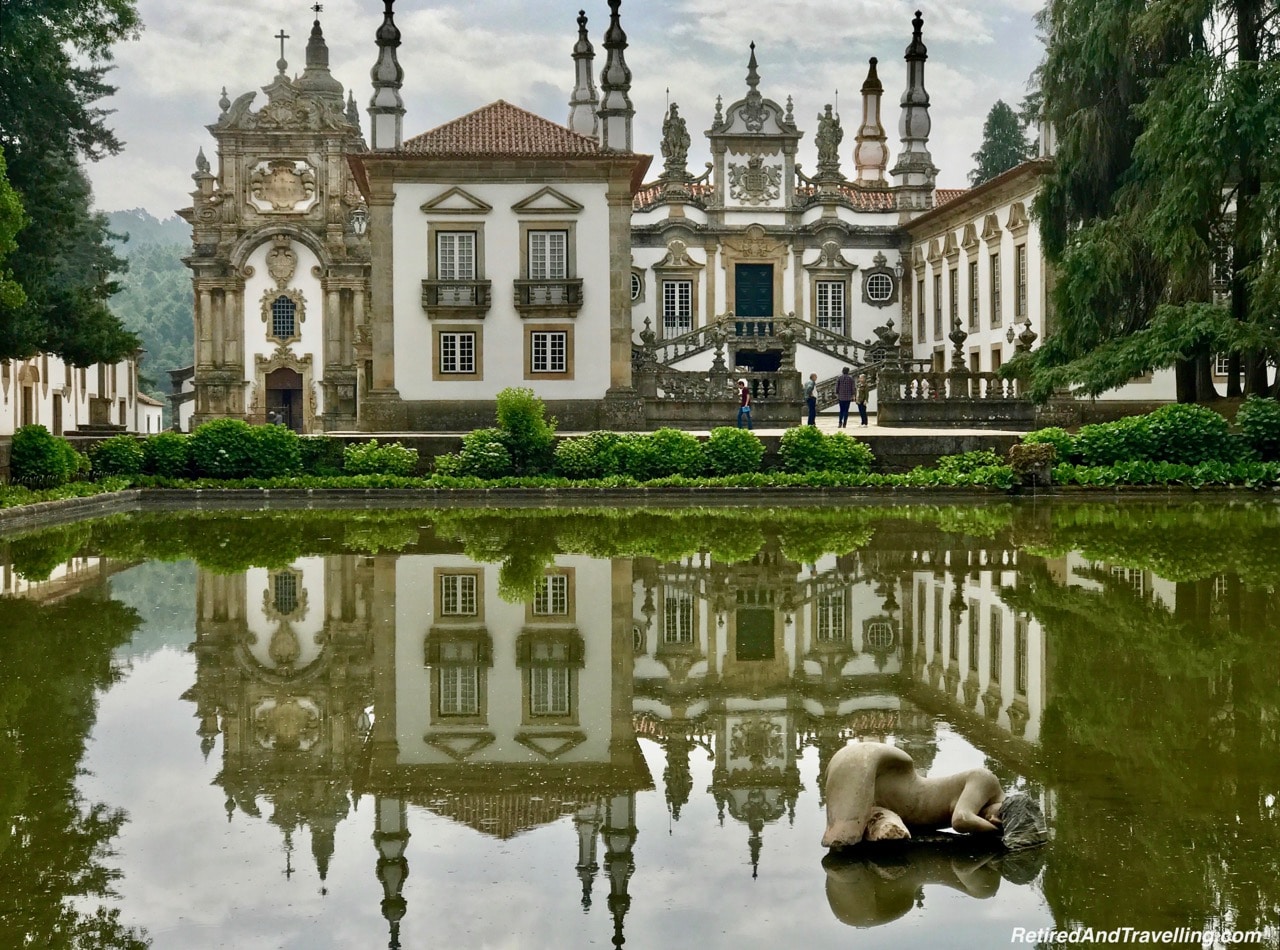 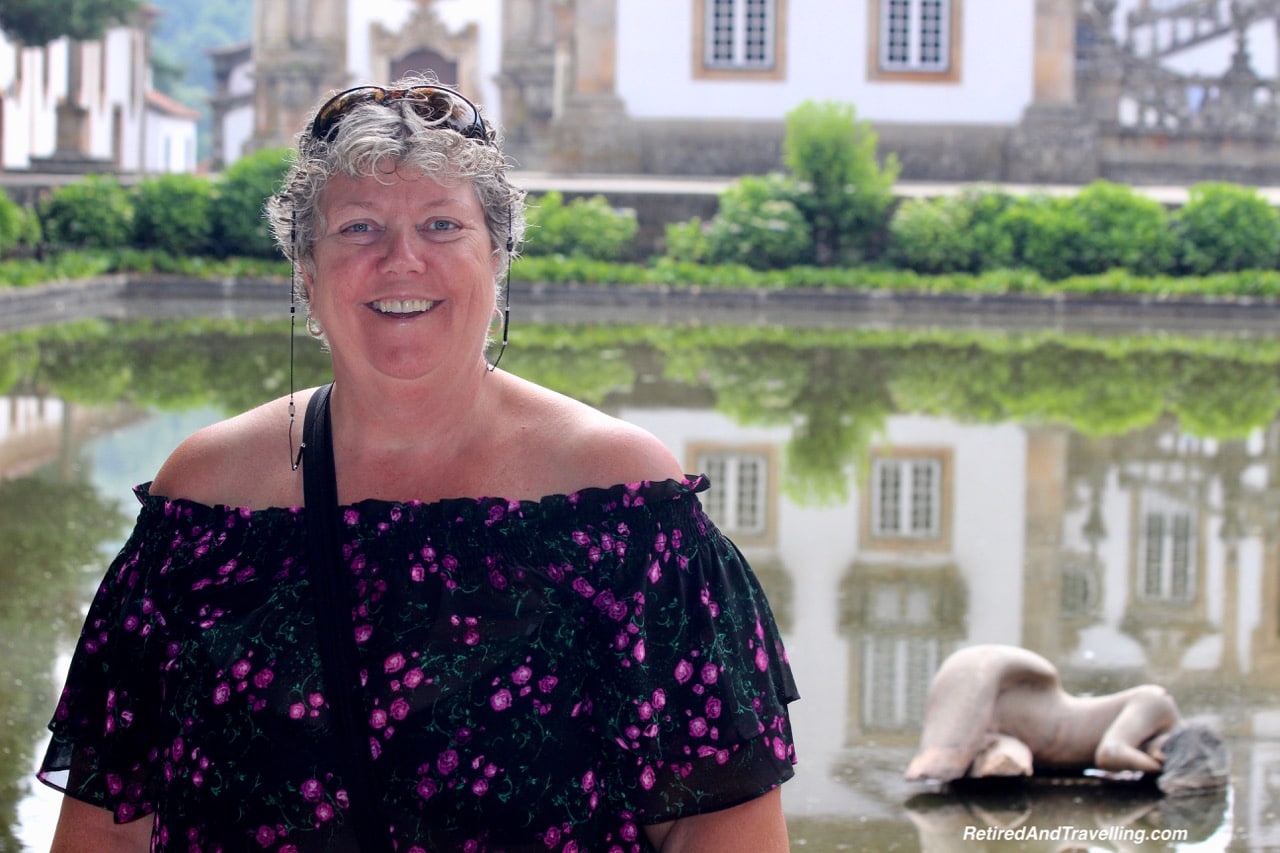 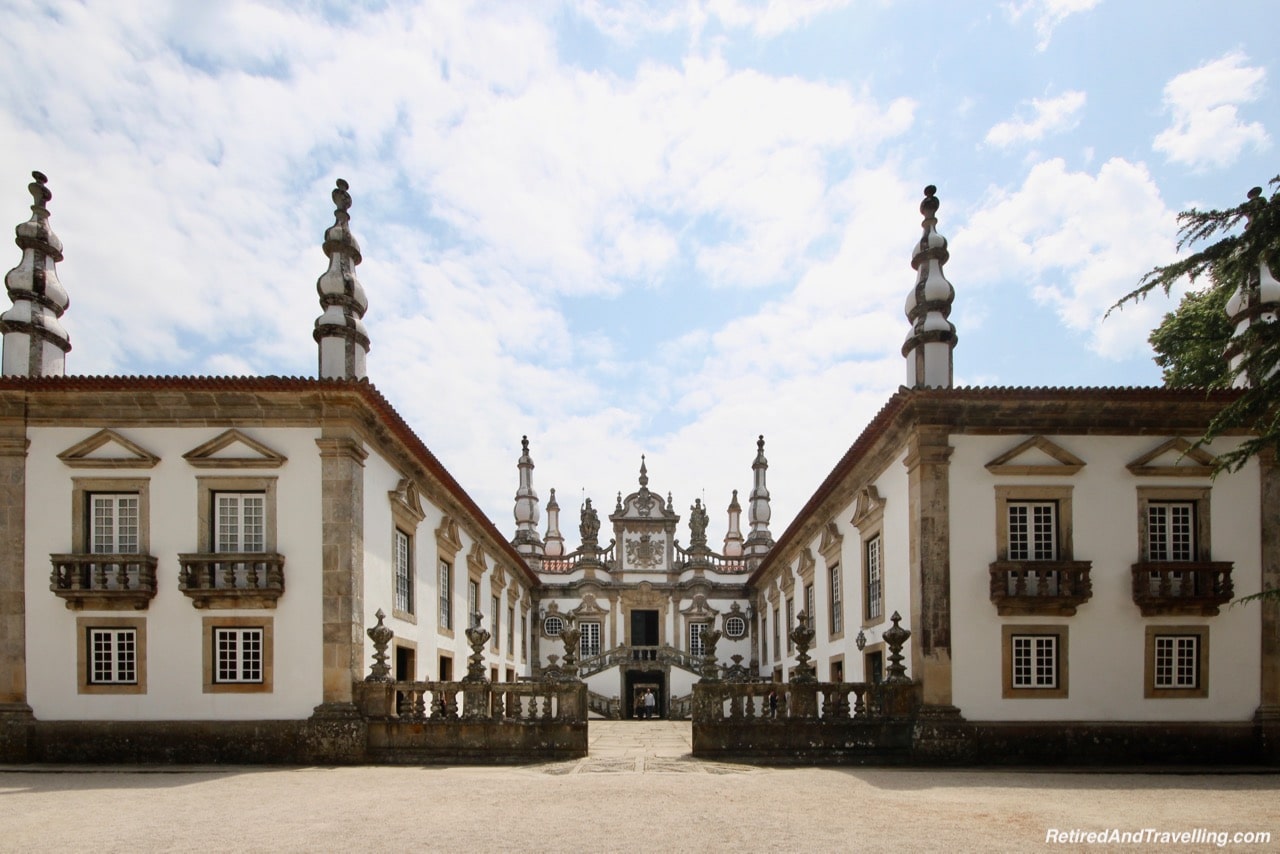 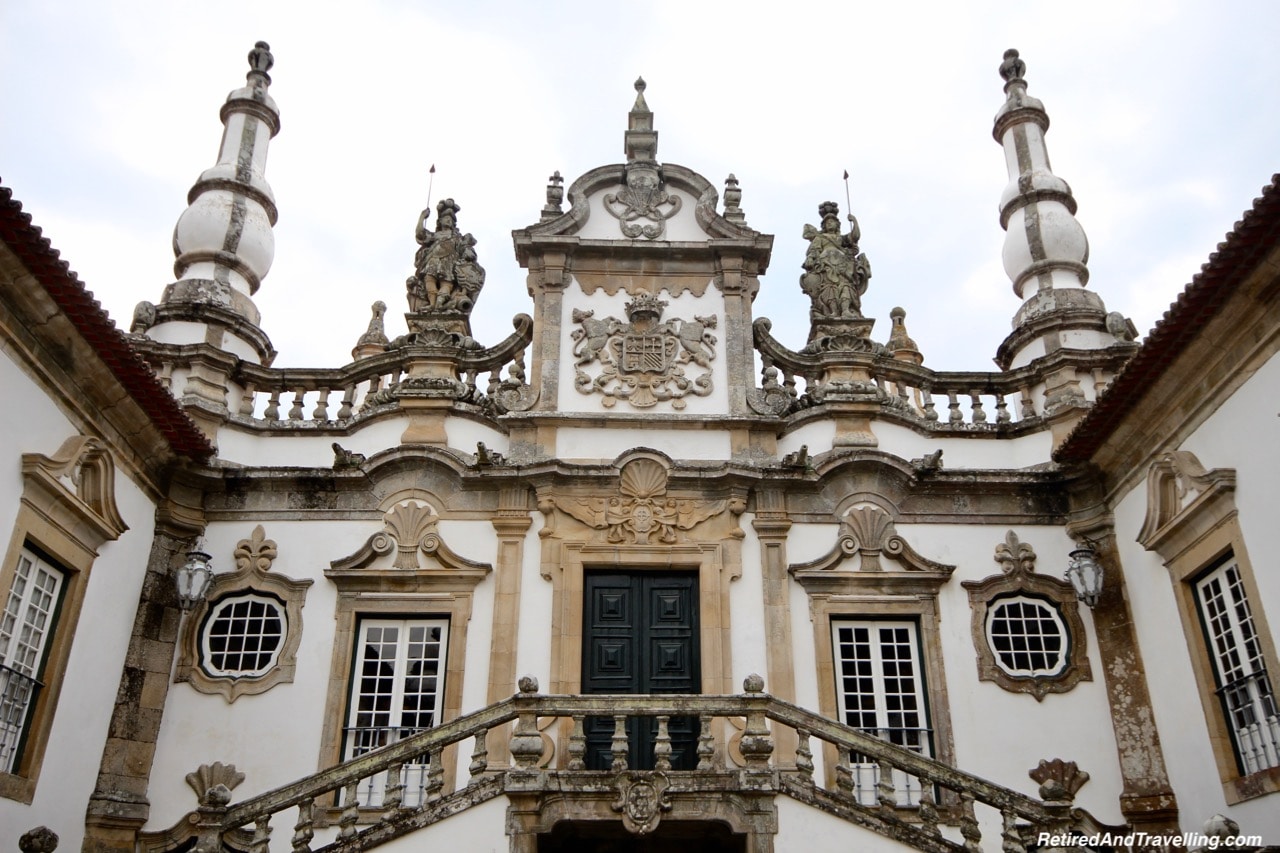 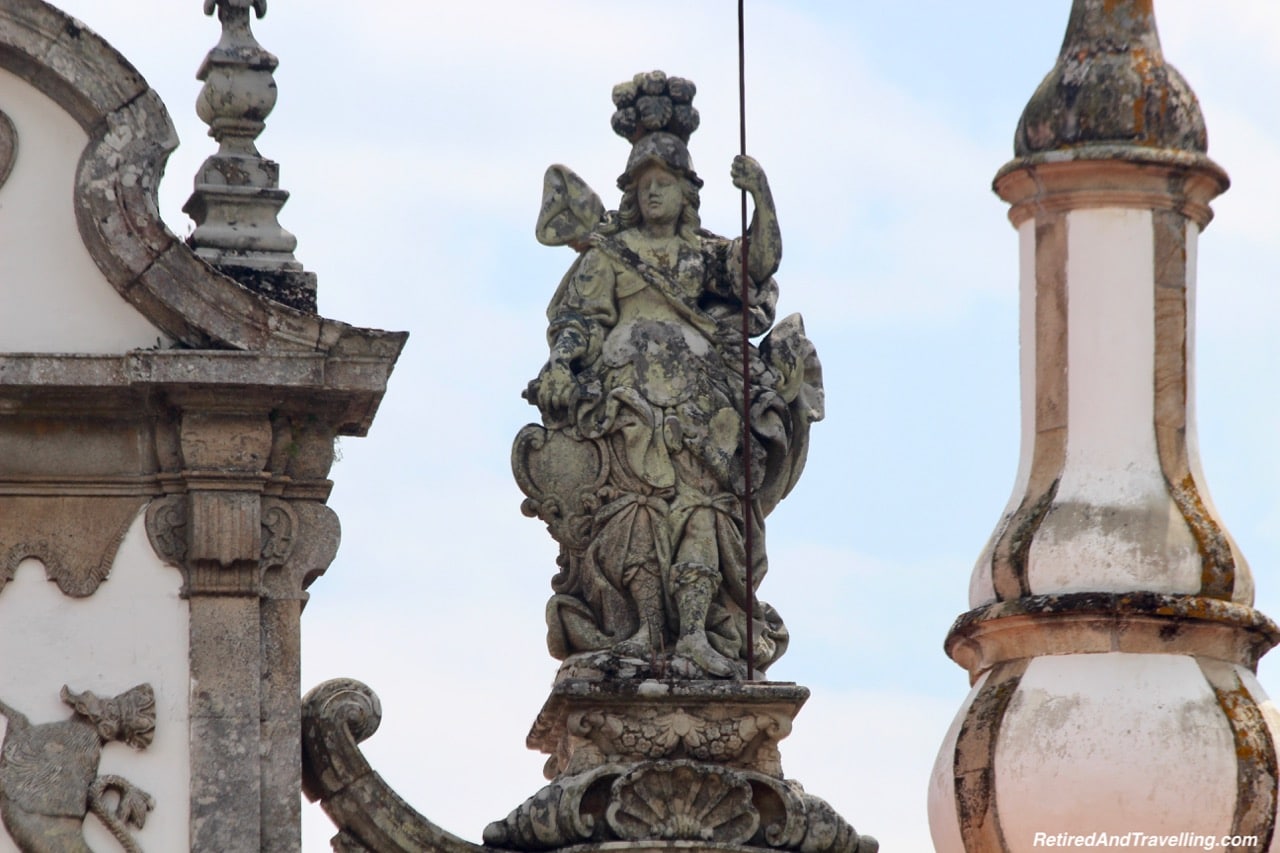 Beside the palace there was a small private chapel. It too was intricately adorned with carvings and detail. We explored the inside when we did our palace tour. 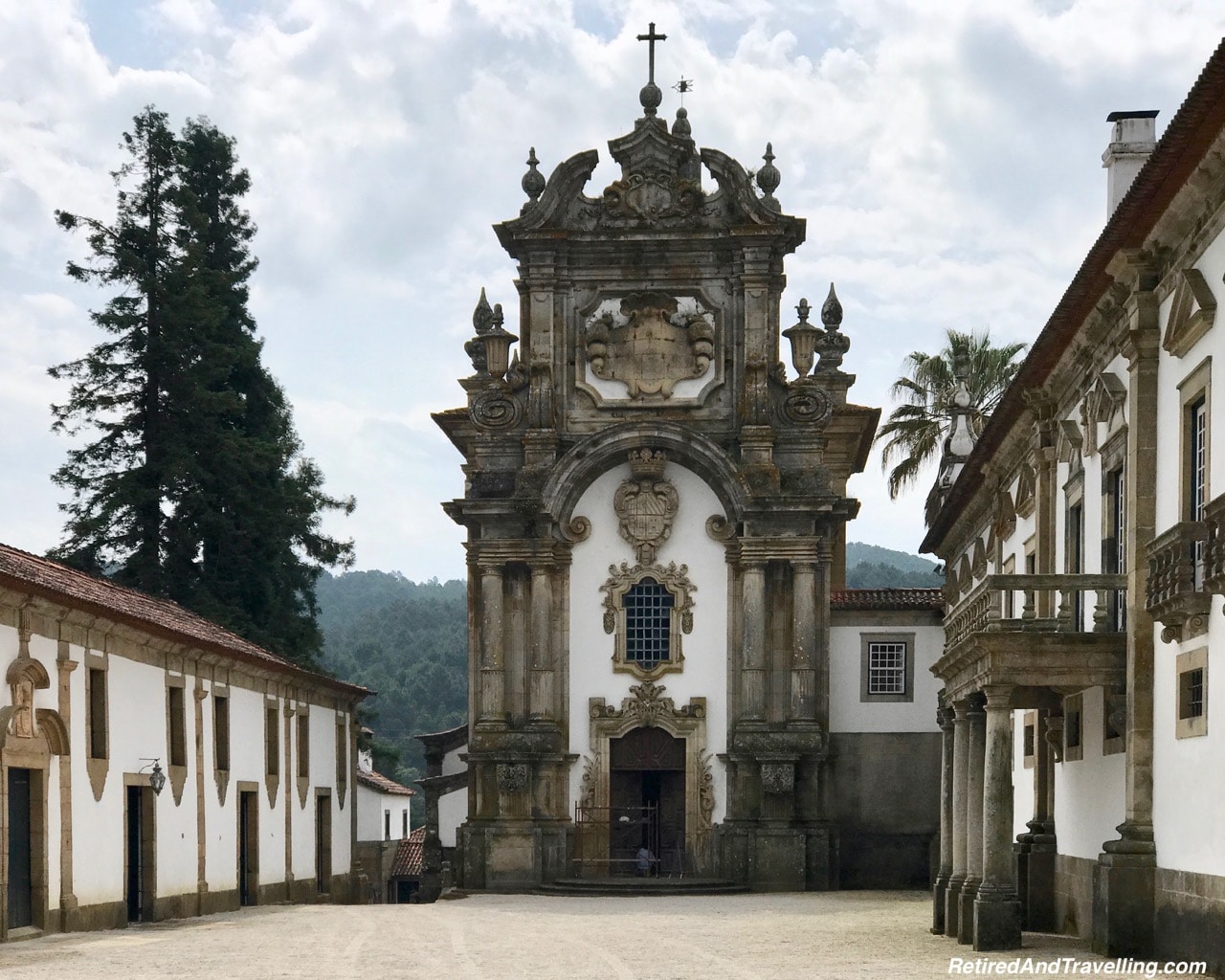 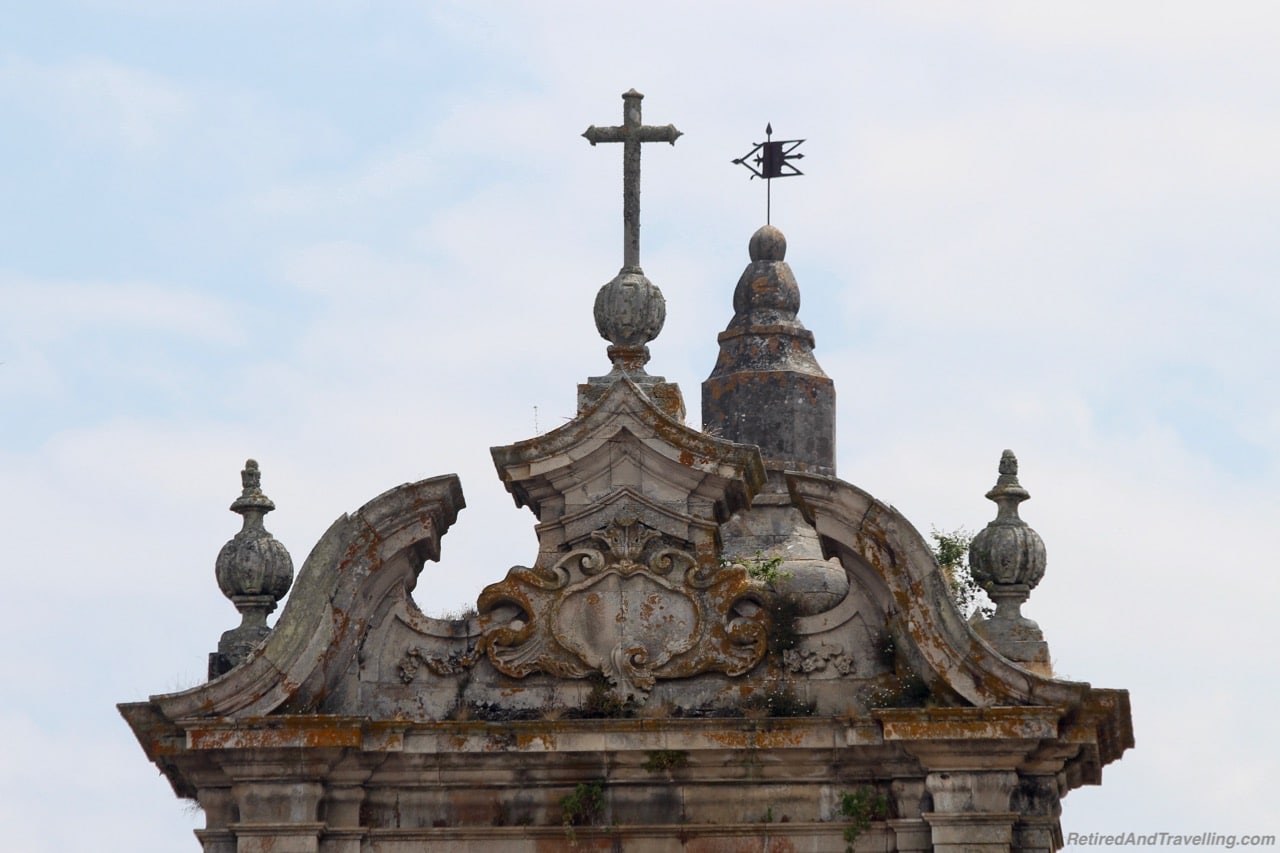 When you visit the Mateus Palace, prepare for the first view to draw you in.

We found a series of small areas that housed the tasting room and the wine production area. Our first stop was in the tasting room. What we didn’t see was the classic Mateus Rosé round bottle.

When we asked, we were told that the classic Mateus Rosé was not produced by the palace winery. In the 1940’s, the picture of the palace had been licensed to the other winery that produces the Mateus Rosé wine. 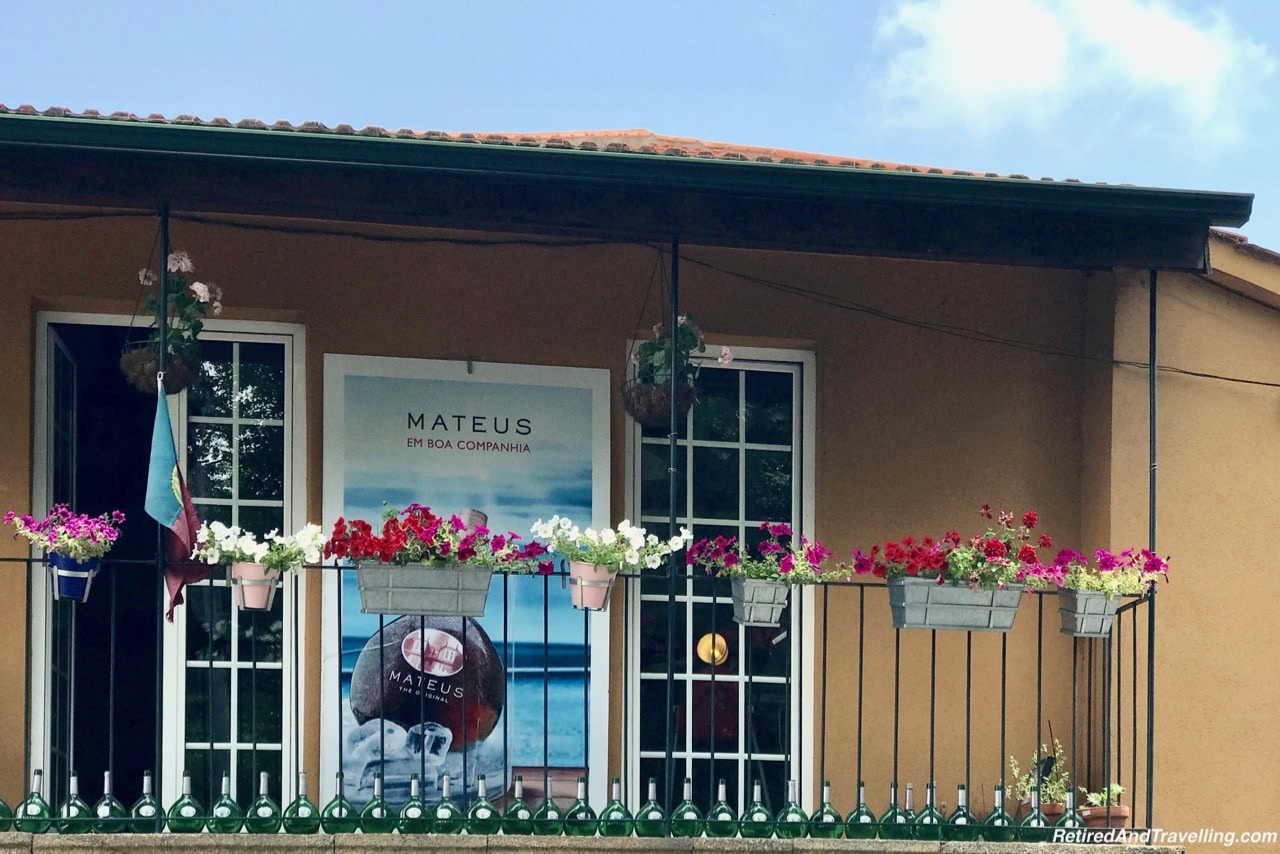 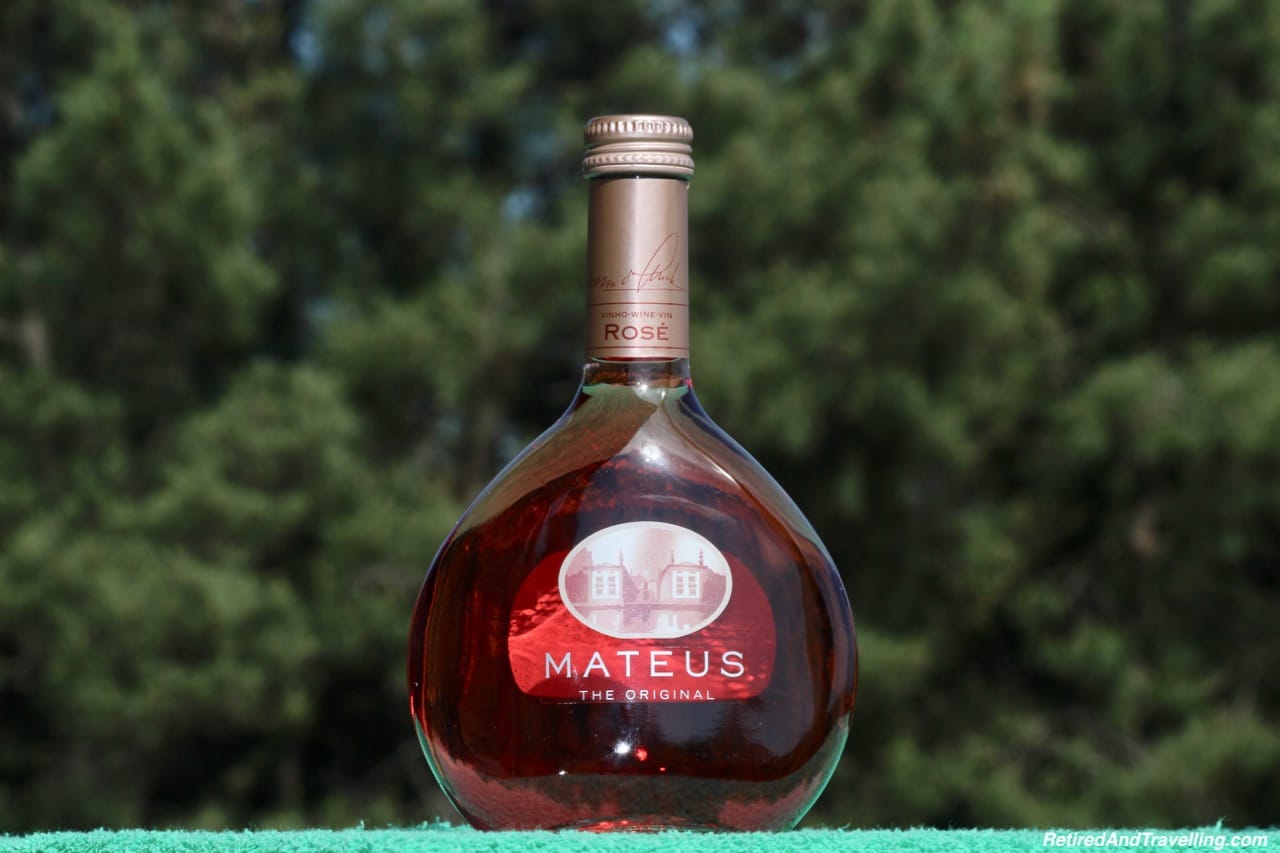 From the tasting room we wandered to the wine production areas. We have done many wine tours on our travels. But there was no tour the day we visited the Mateus Palace. We were left on our own to wander around and look at the wine processing area. There seemed to be a mix of modern stainless steel vats with equipment that looked traditional. There were some posters around the wall that talked about the history of this wine region. 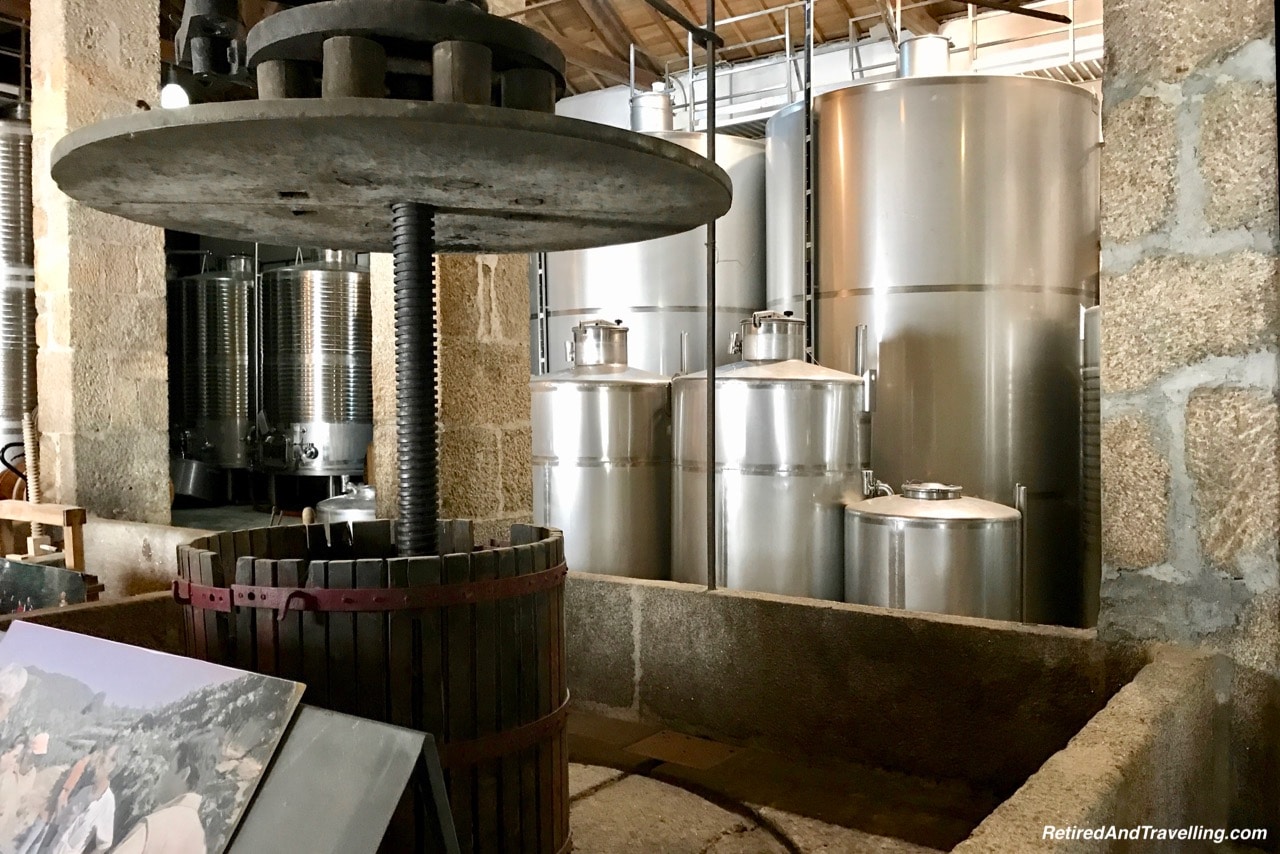 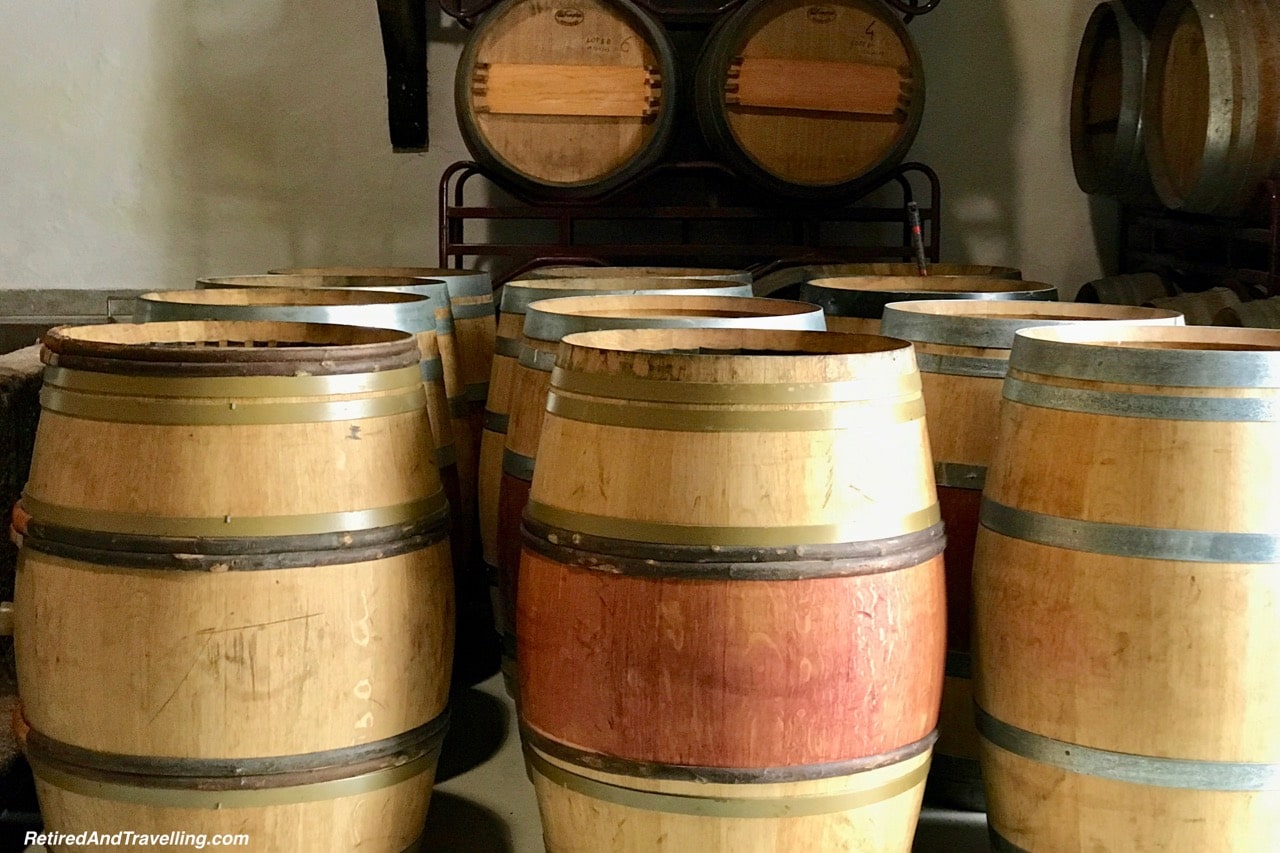 We saw bottles of the wine still produced at this location. If you visit the Mateus Palace, you can taste the local wine in the tasting room. But you won’t get classic Mateus Rosé! The gift shop also had some older vintages for sale. 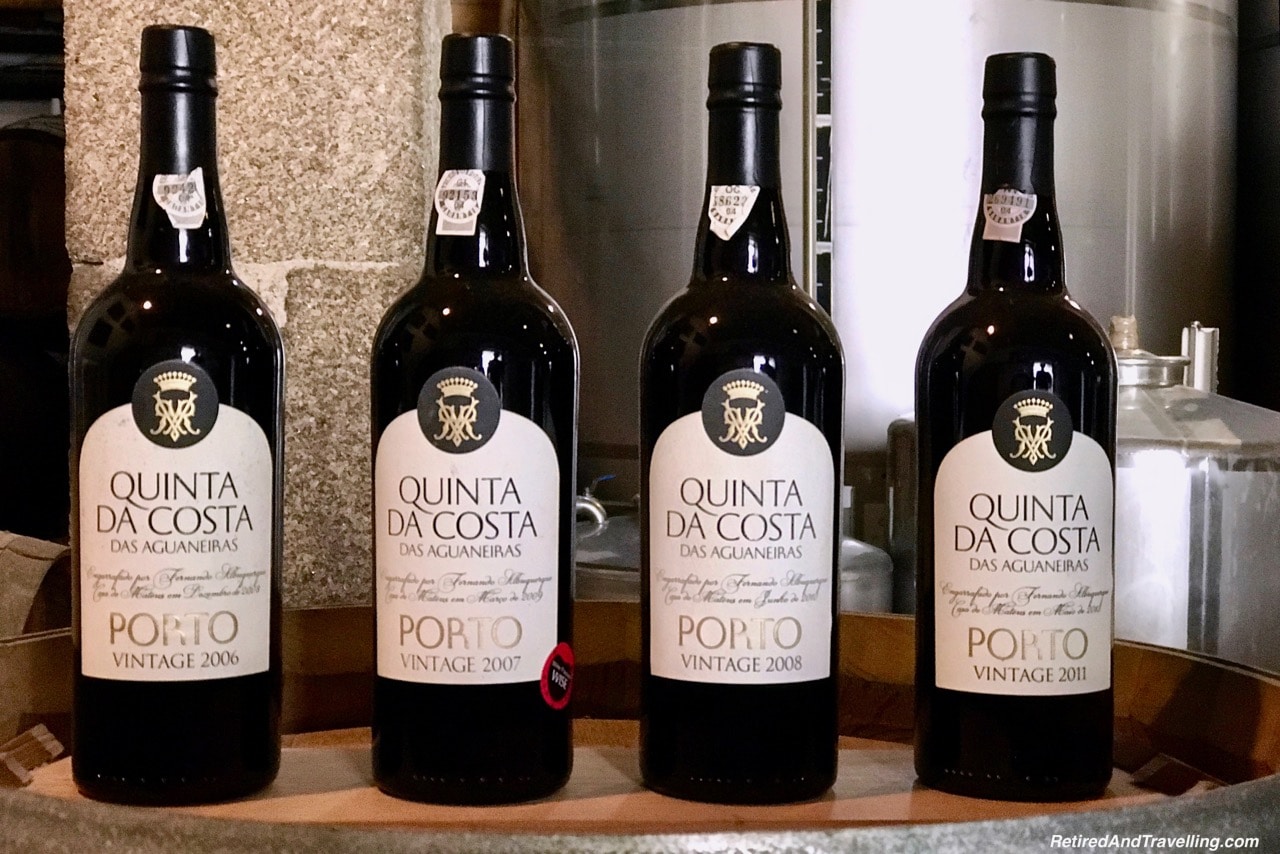 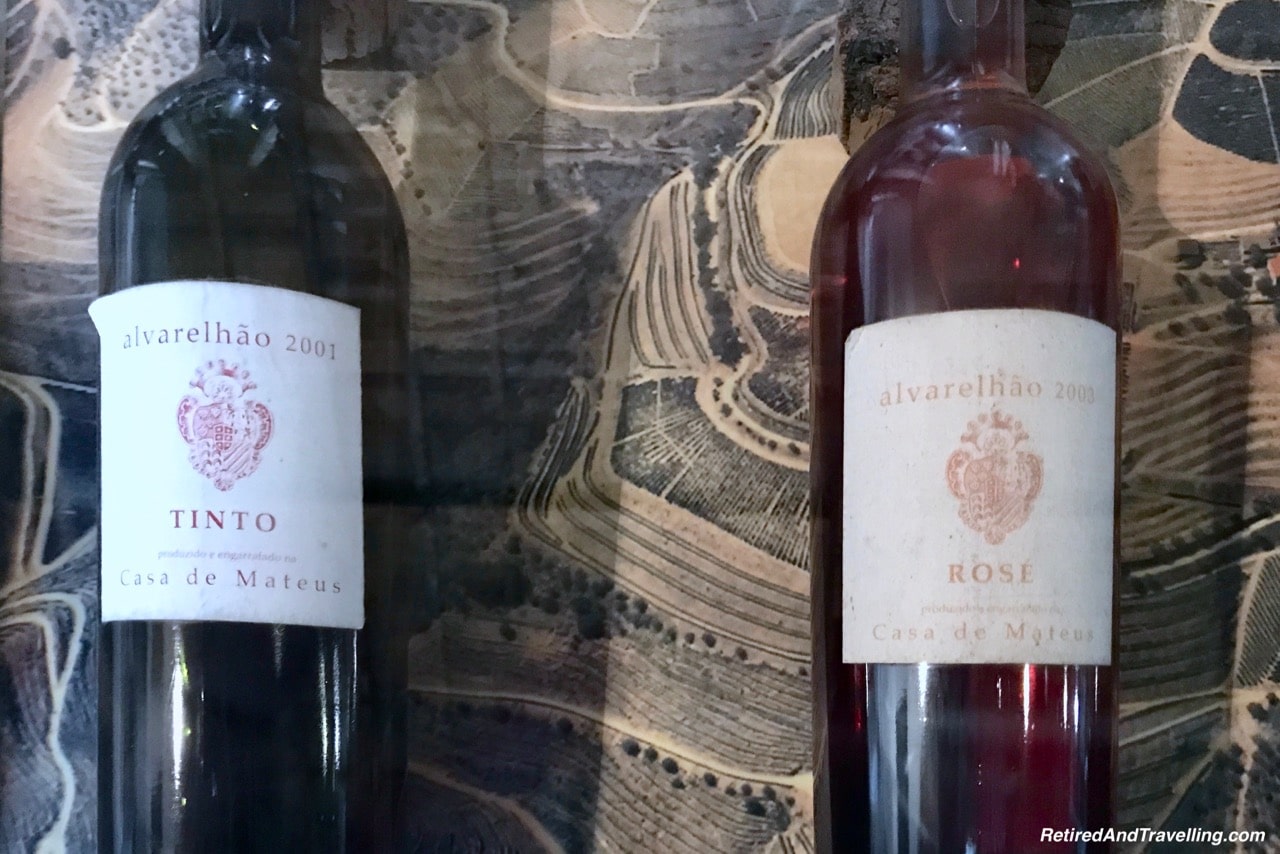 A Tour Of the Palace

We got an english guide and headed into the palace. Sections of the palace had been set up as a museum foundation and parts were stilled lived in occasionally by the family. The museum portion provided a vast array of historical items. There was no photography allowed in the palace.

We moved from room to room in the baroque-style palace. The ceilings were beautiful, carved in deep chestnut wood. The Four Season room had 4 paintings of a woman created from produce of the season. Another room had furniture on display including a table with a mother of pearl top and two other intricately carved chests (one with ivory and one with Portuguese wave carvings). Two of the rooms contained religious items that had been moved from the chapel to preserve them. There were a large number of relics and a collection of vestments worn by the priests in the chapel. The Blue Room showed off blue Cantonese China and a beautiful Japanese chest.

On the other side of the main hall we found the library that had been restored. The centrepiece was an ancient illustrated book of poems by the famous Portuguese poet Camões documenting Vasco Da Gama’s voyages. The copper etchings used to create the illustrations were also on display. We next went into a series of bedrooms. You used to walk from room to room but renovations had separated the rooms to create privacy.

Stop At The Exhibition Rooms

Two other separate exhibition rooms contained various historical documents and clothing. The chapel was still used by the family. Twice a year people from the town come to the chapel. The sacristy contained the original interior of the chapel that had originally stood on this site before the larger house and chapel were built. The main alter showed the familiar depiction of the 7 steps to heaven. This was also from the original chapel.

When you visit the Mateus Palace, make sure to take the palace tour. It was an interesting lesson in the local customs and history of this region.

After the palace tour we went to wander in the gardens. We could again take pictures. The gardens were modelled after Versailles. The different areas were separated by hedges. Arches were used to move from area to area. Hedges and grass were trimmed to create patterns. It was all quite beautiful and artistic. 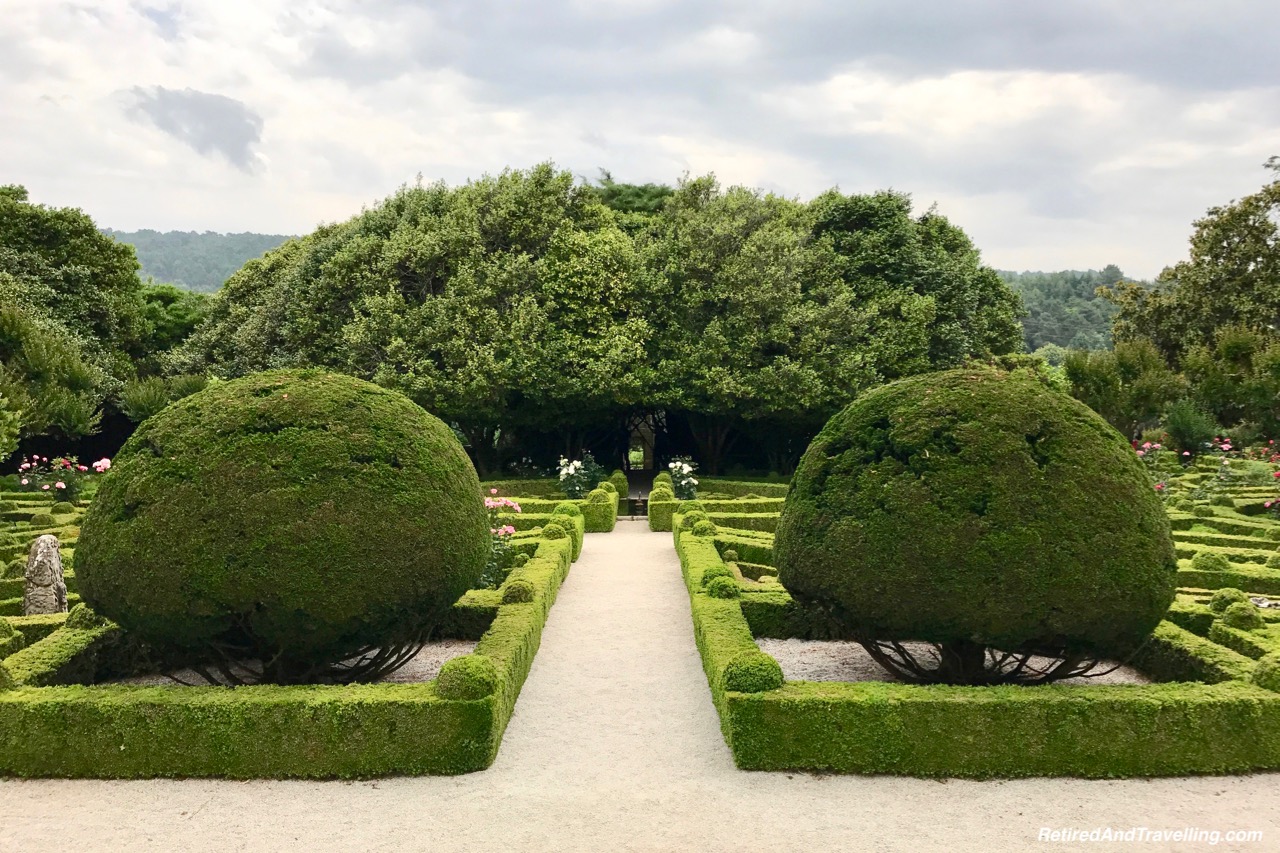 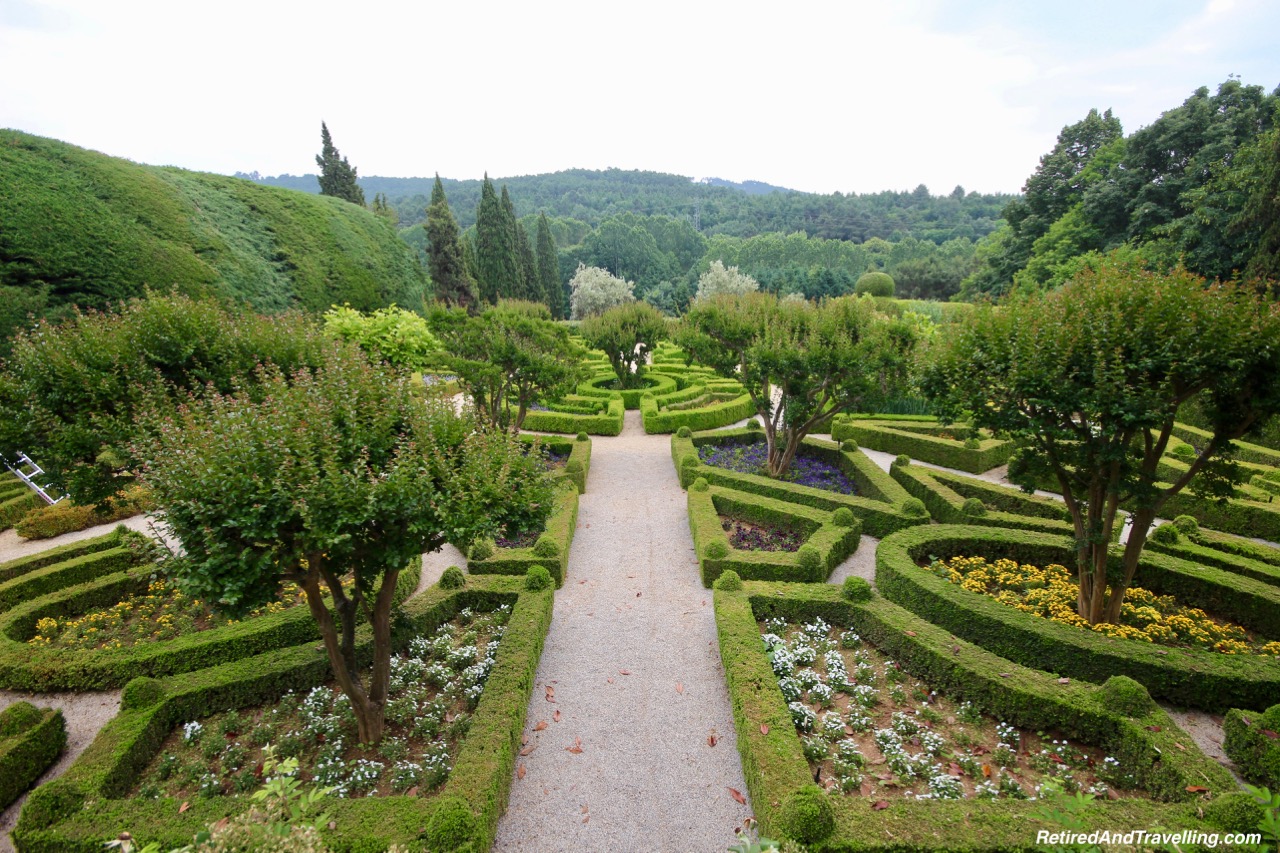 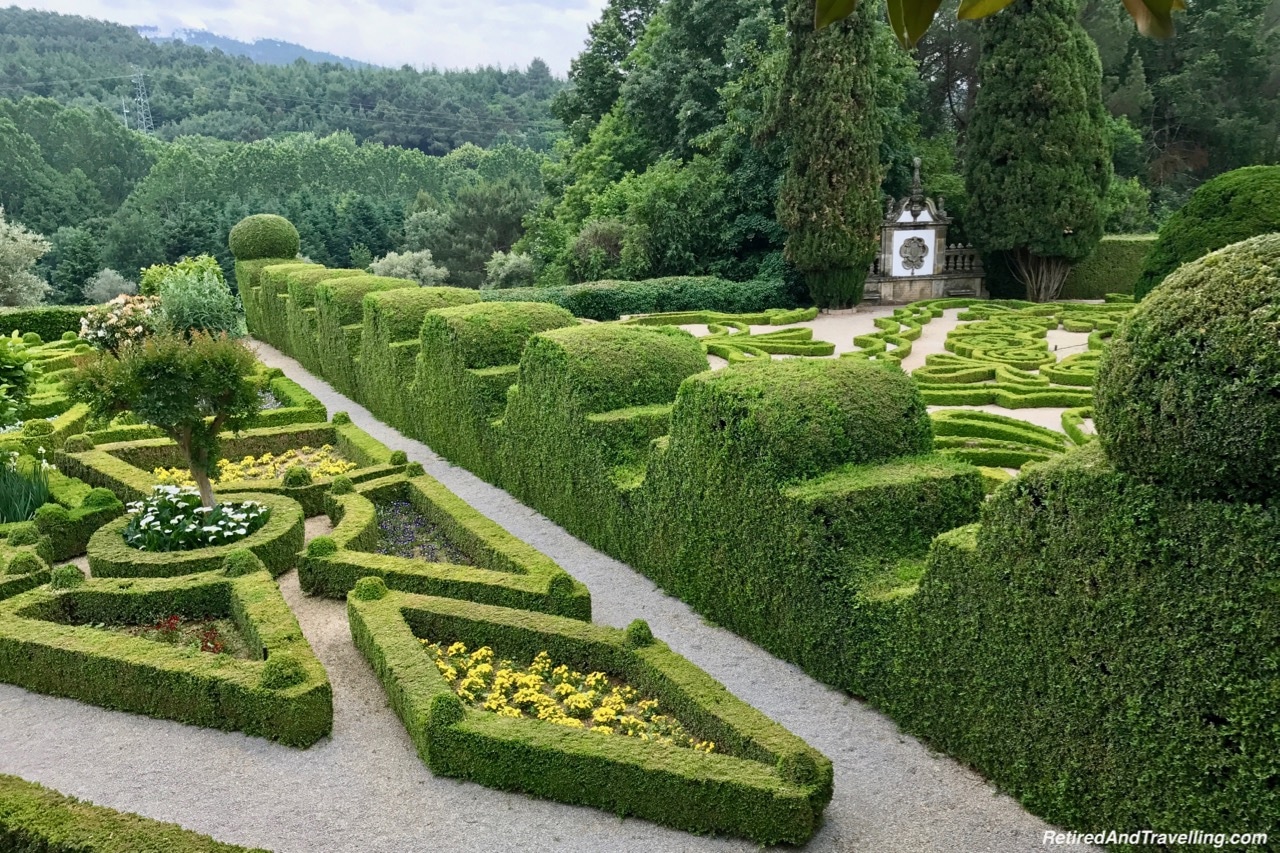 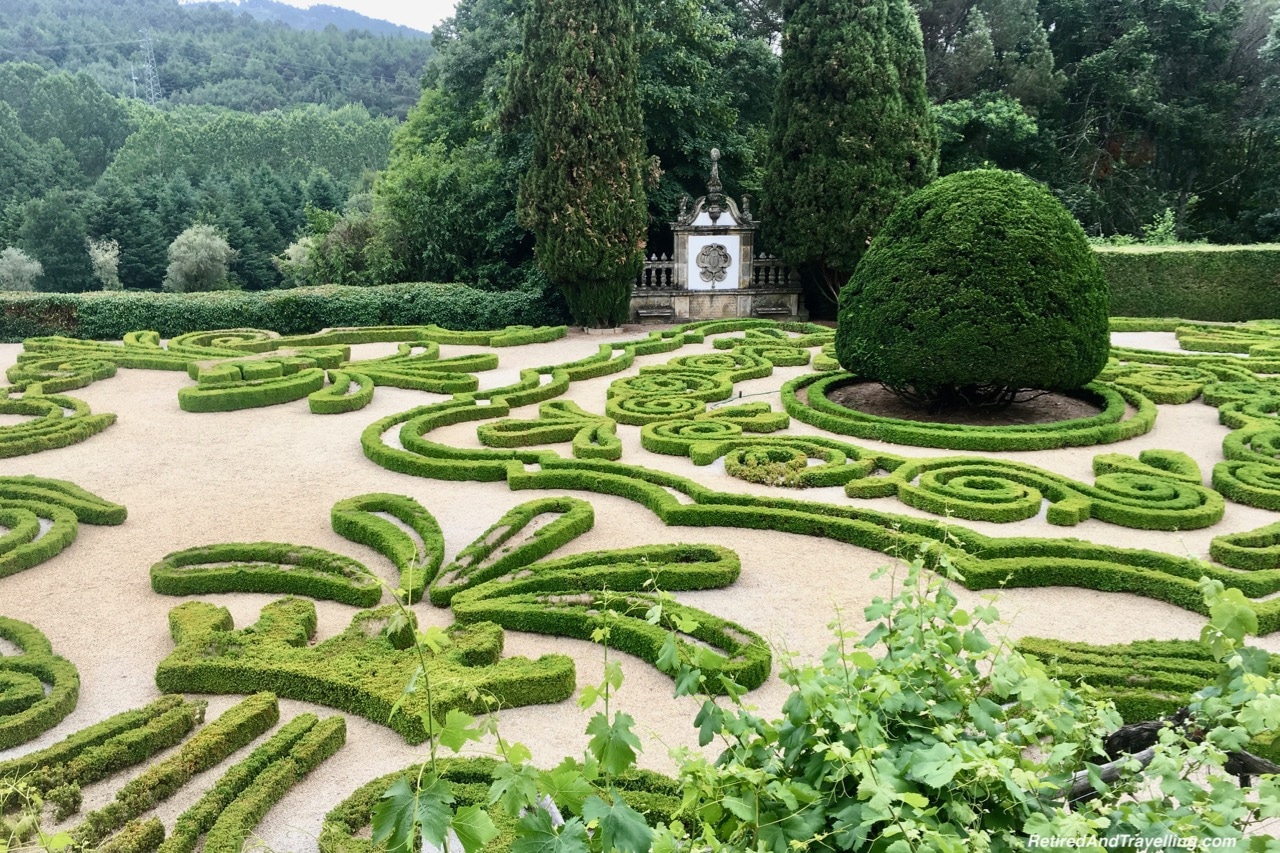 The roses were still in bloom. Flowers and tree blossoms provided splashes of colour in the greenery. The gardens provided a great setting for the palace and chapel. 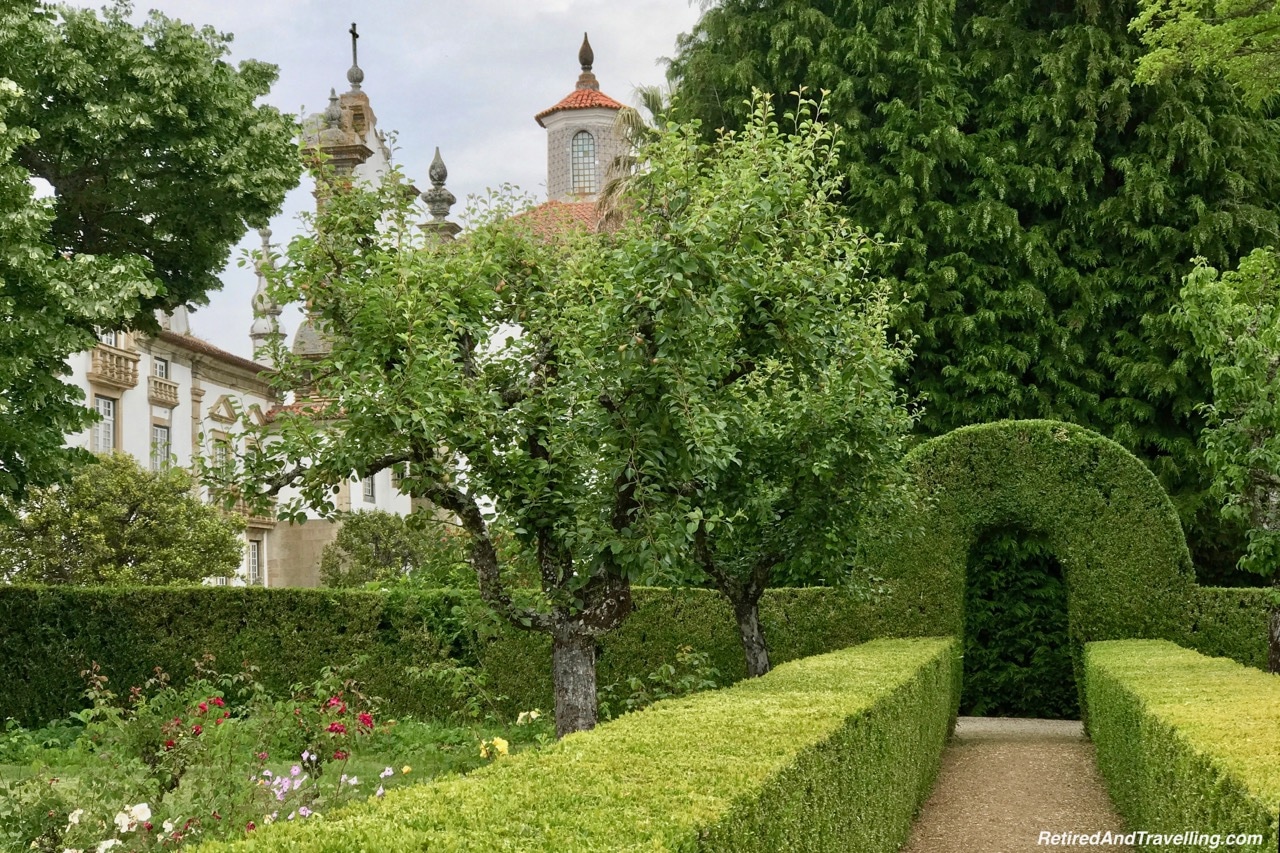 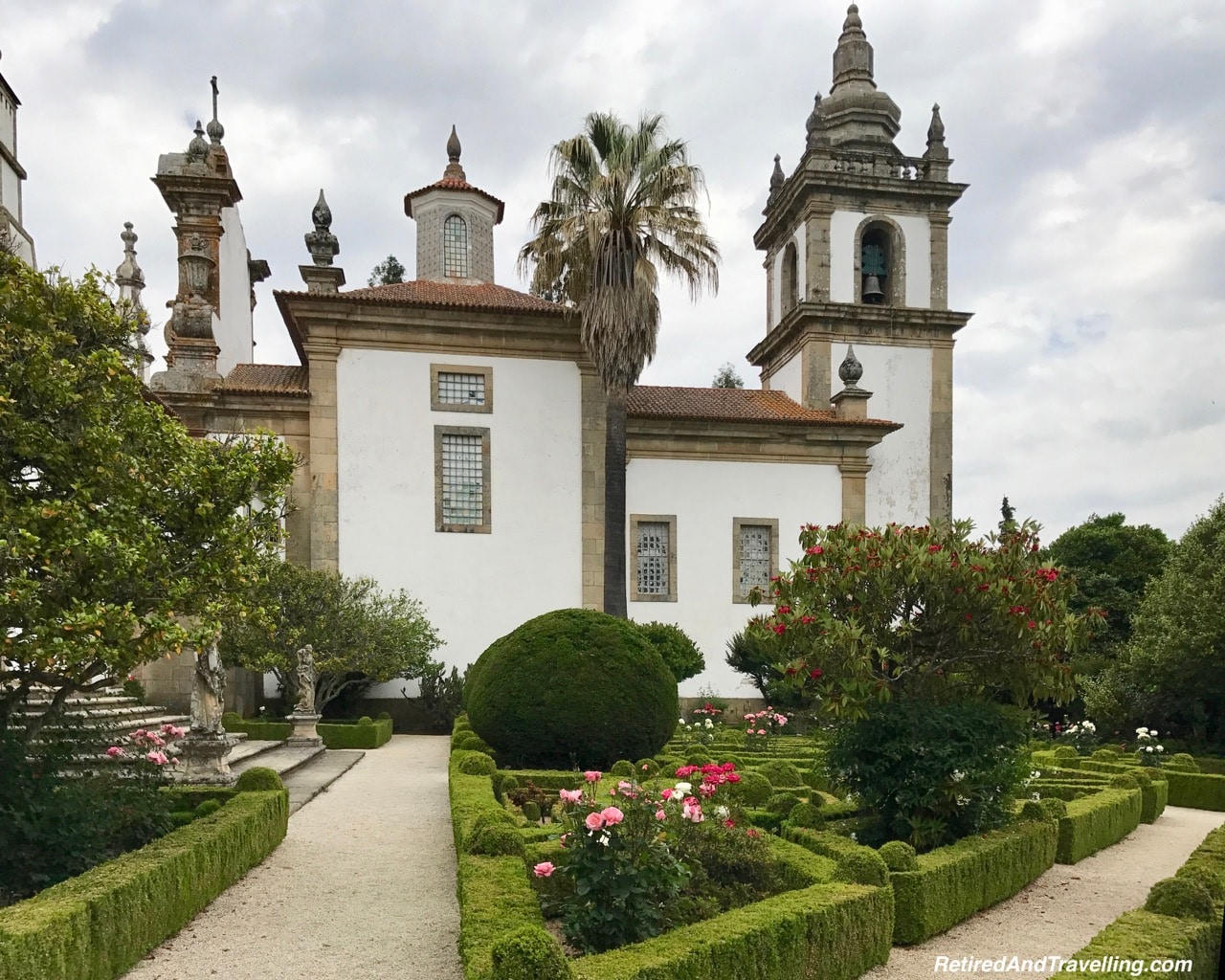 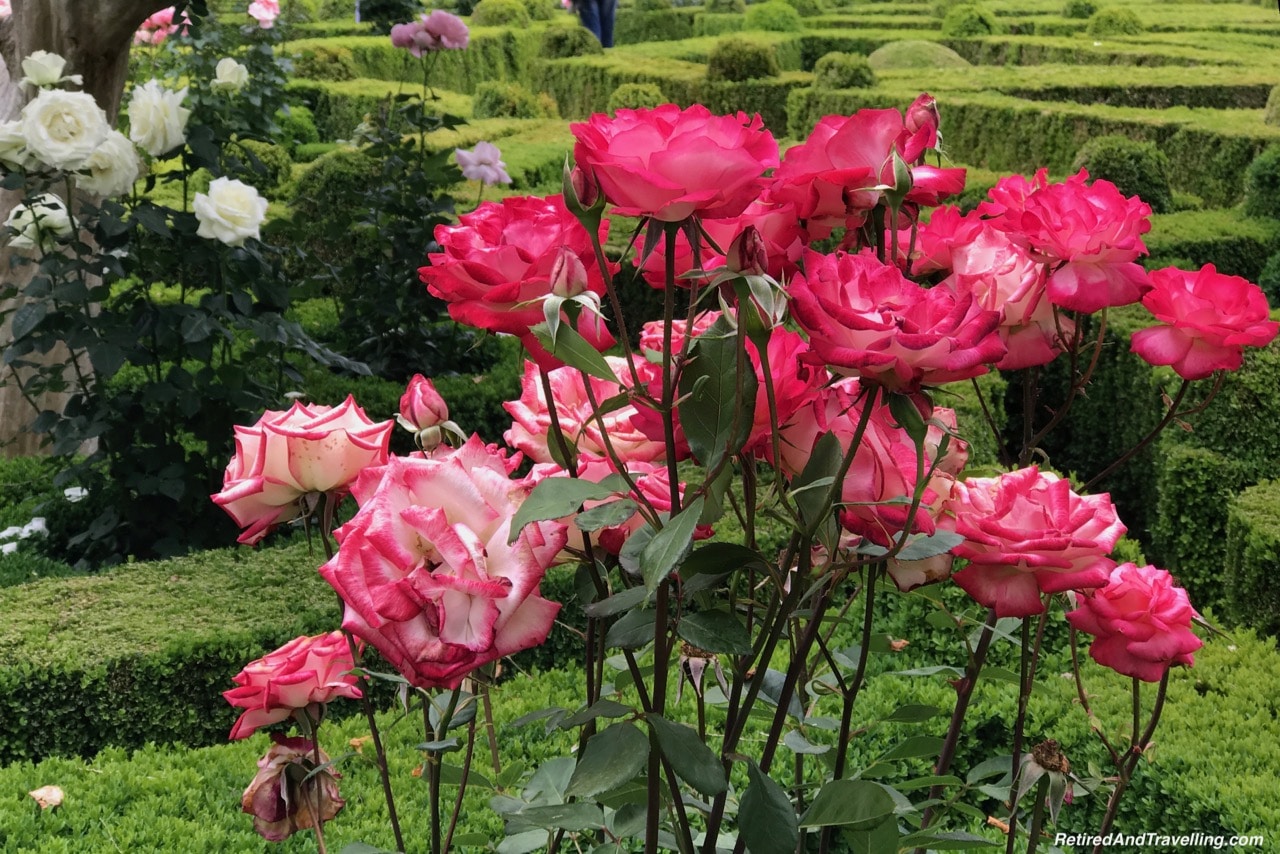 It was peaceful as we strolled in the gardens. The palace grounds were not too crowded so we often had parts of the garden all to ourselves.

The Mateus Palace Was A Great Day Trip

We went to visit the Mateus Palace out of curiosity. We thought we might get to sample the famous Mateus rosé wine. But we soon learned that this wine was not even produced here.

We discovered a delightful palace and gardens as we strolled about. In addition, we found yet one more of the many wineries of this region. If you visit the Douro Valley, you should plan to visit the Mateus Palace.

Did you visit the Mateus Palace? Did you enjoy the palace or gardens more? 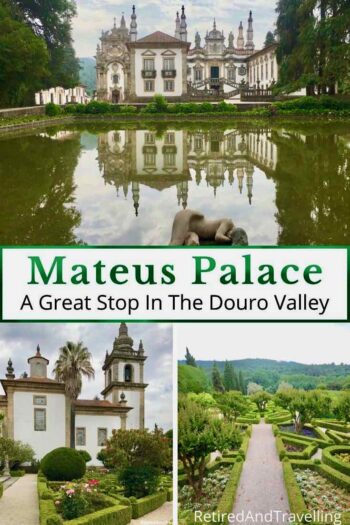 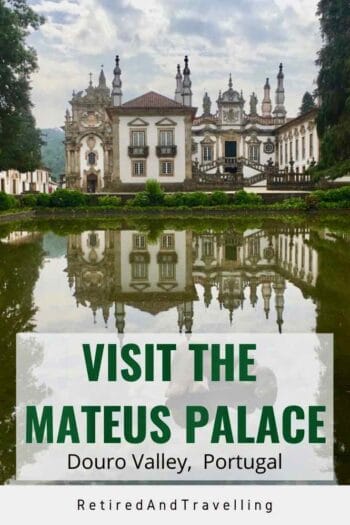 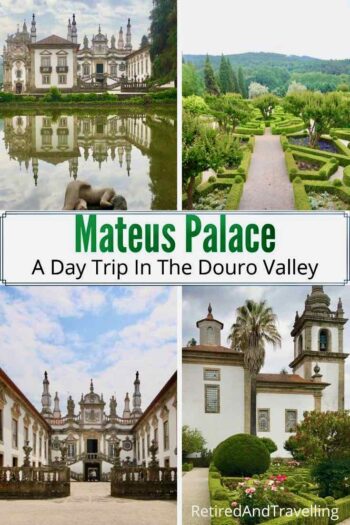 A Quick Tour For The Highlights Of Galicia Spain Our first stop in Spain on this trip was two days in Bilbao. The second stop was in Ferrol, Spain on our Oceania Cruises trip along […]

We would love if you could share this!
90
90
Shares

Walk On Castle Walls in Obidos

The Walls Surround the Town of Obidos We could see the walls of the city from afar as we drove up to Obidos. When we got inside the walls, we saw the steps that go […]

Driving Along the Douro River Valley

Leaving Porto We had a busy 3 days in Porto. It was great to see the beautiful city. We did a small riverboat tour on the Douro River in Porto to see the 6 bridges. […]

We would love if you could share this!
41
41
Shares