Our cruise in the Southern Caribbean included the ABC Islands – Aruba, Bonaire and Curacao. Bonaire was our last ABC island to visit on this trip. We have always wanted to visit Bonaire for scuba diving after we spent a week in Curacao scuba diving. On our first stop on this trip in Aruba, we experienced very poor underwater visibility. The continued high wind forecast meant we did not want to commit to head underwater in Bonaire until we hit the island. 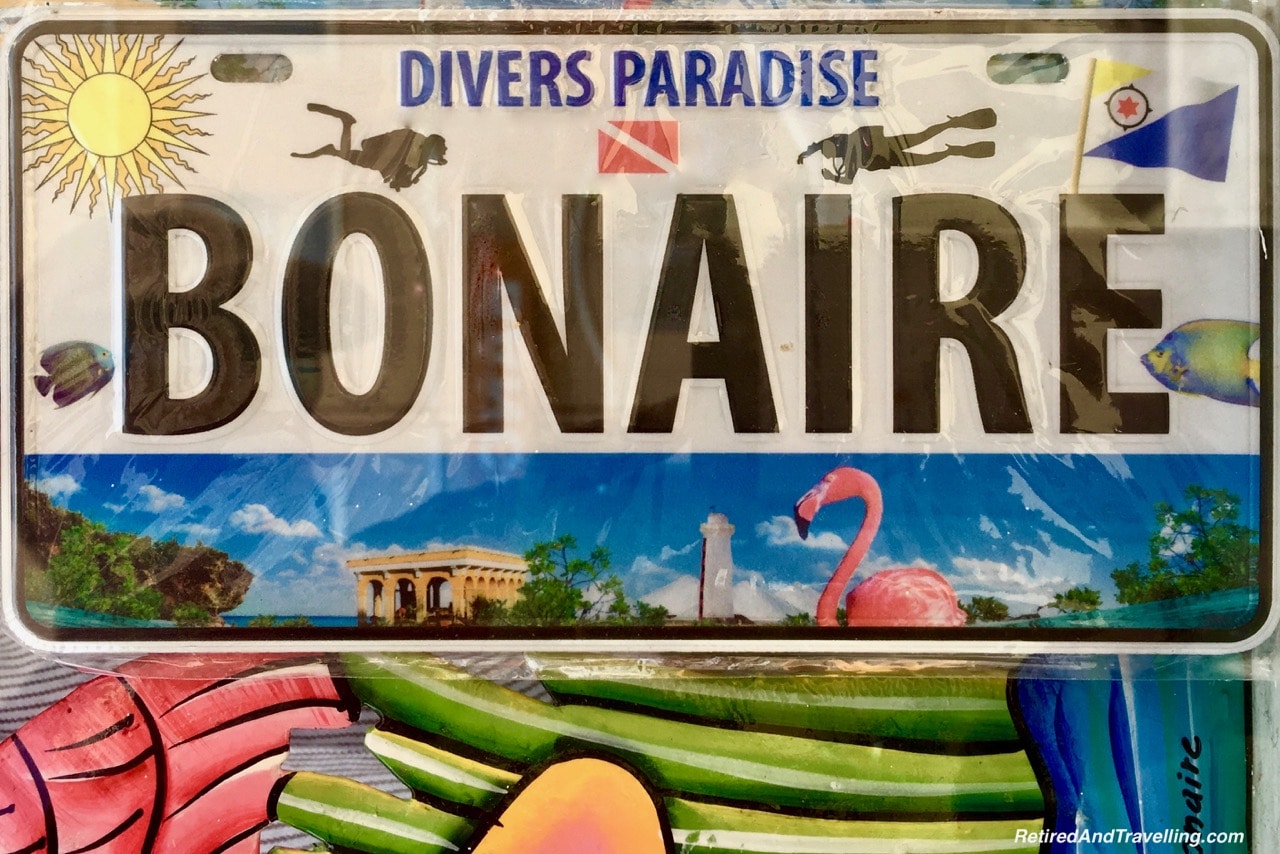 But as the ship docked in Kralendijk, we looked down and could see clear to the bottom. We were delighted that visibility was so much better than we expected. 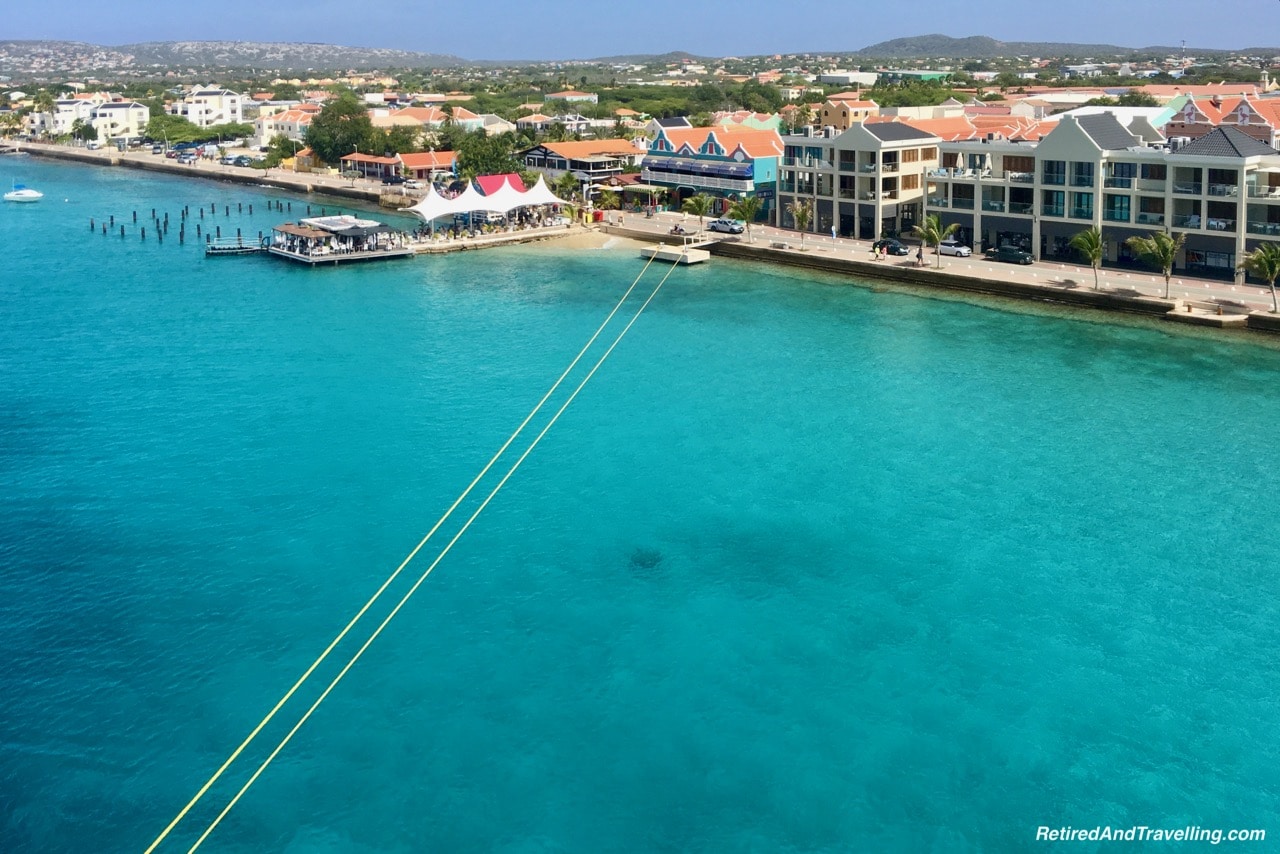 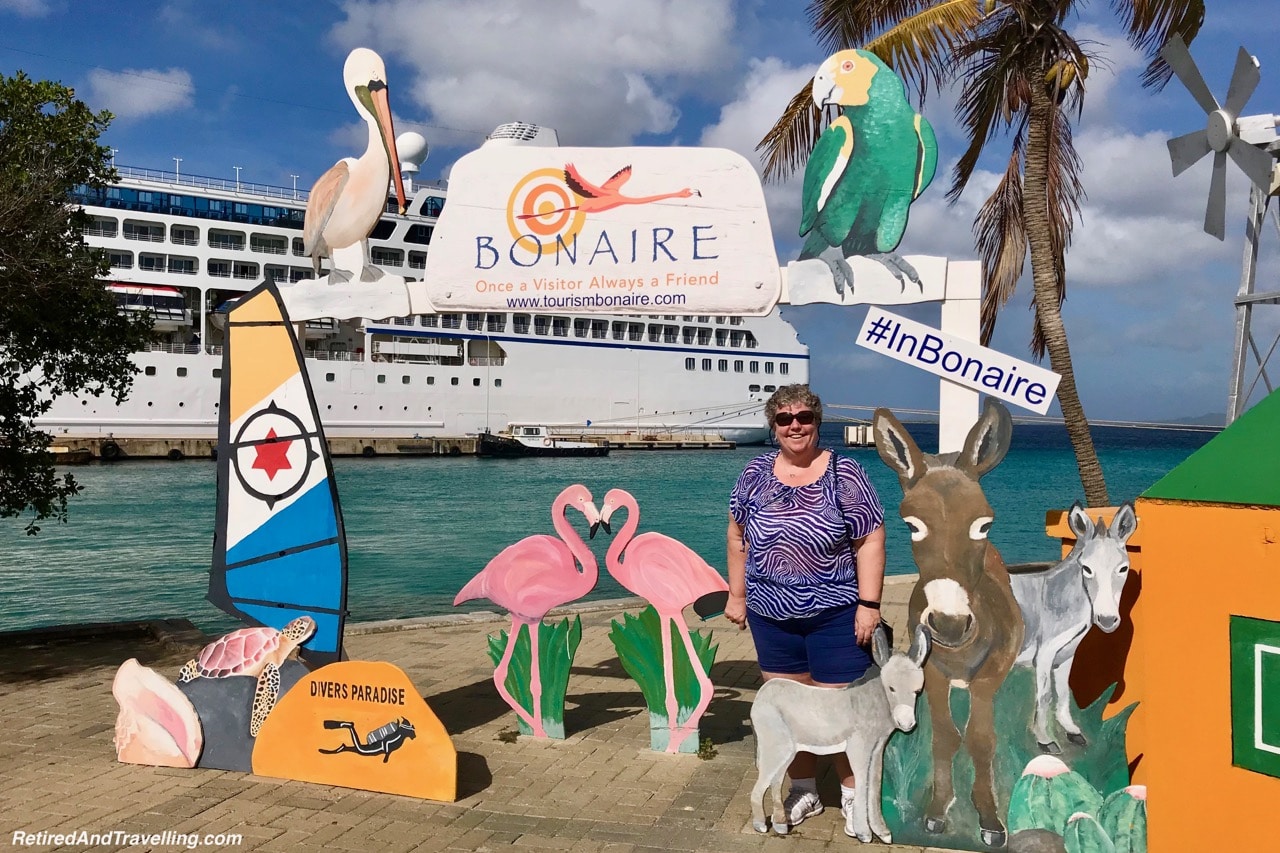 A Walk Through Kralendijk

We started our visit to Bonaire with a reconnaissance walk. We checked out different options to go scuba diving or snorkelling. The small island off of Kralendijk (Klein Bonaire) called to us. Right close to the dock we found the Caribe Water Taxi. The posted times suggested that the water taxi only ran every 2 hours. But with two cruise ships in port, the water taxi ran every 30 minutes. There were two large catamaran style boats and when it got busy, an extra smaller boat was put into service. 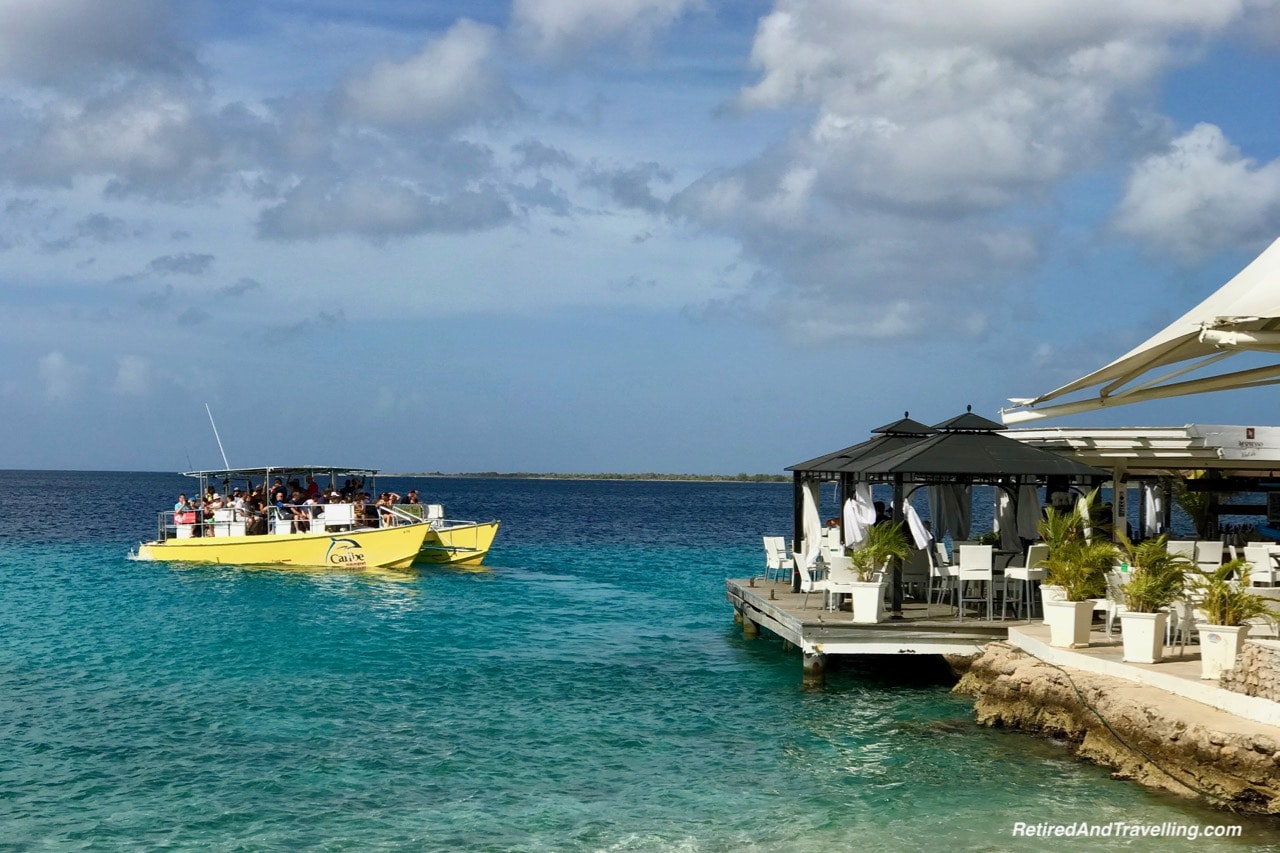 A small semi-submersible boat ran from the same dock. We had a disappointing semi-submersible trip when we toured Aruba. The sales guy promised so much better visibility than we had in Aruba. But we really wanted to get into the water and not just see it through the windows. 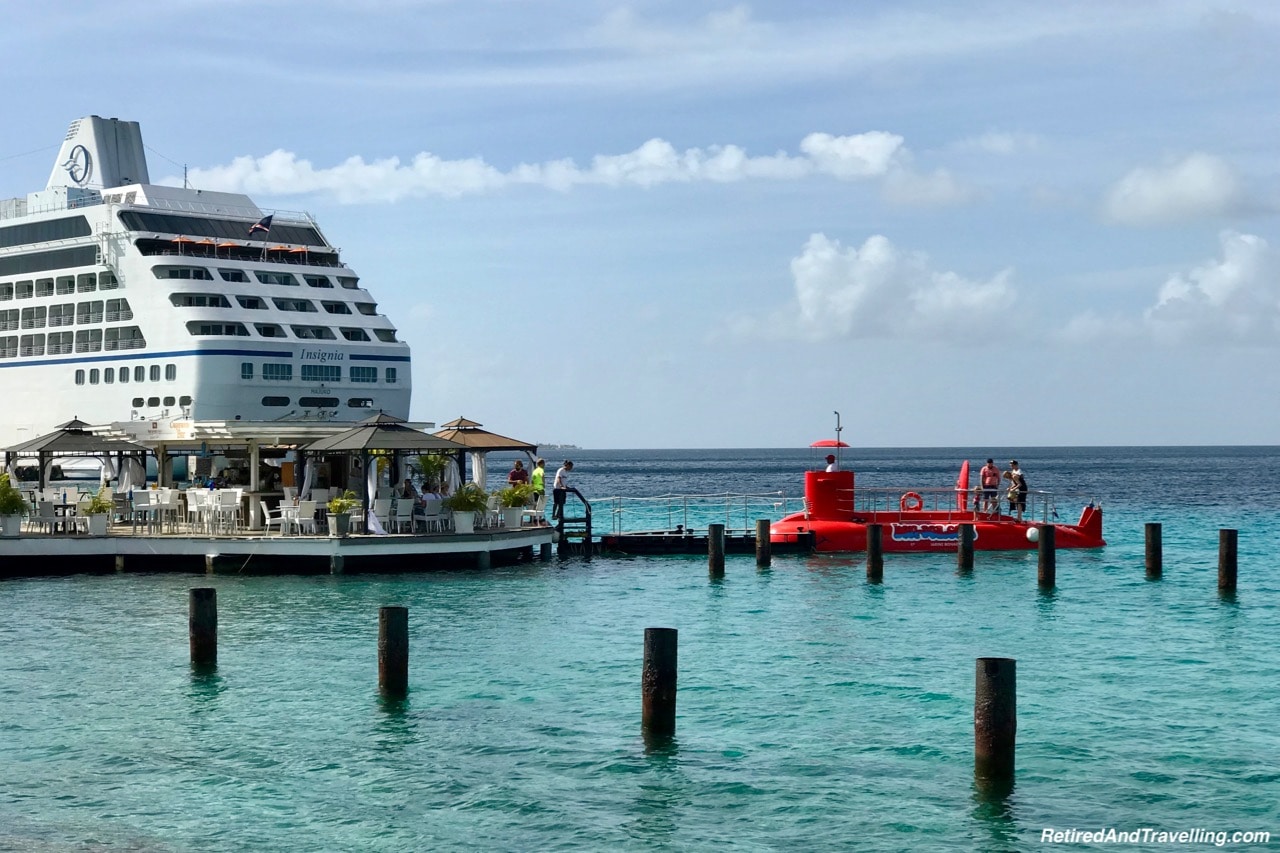 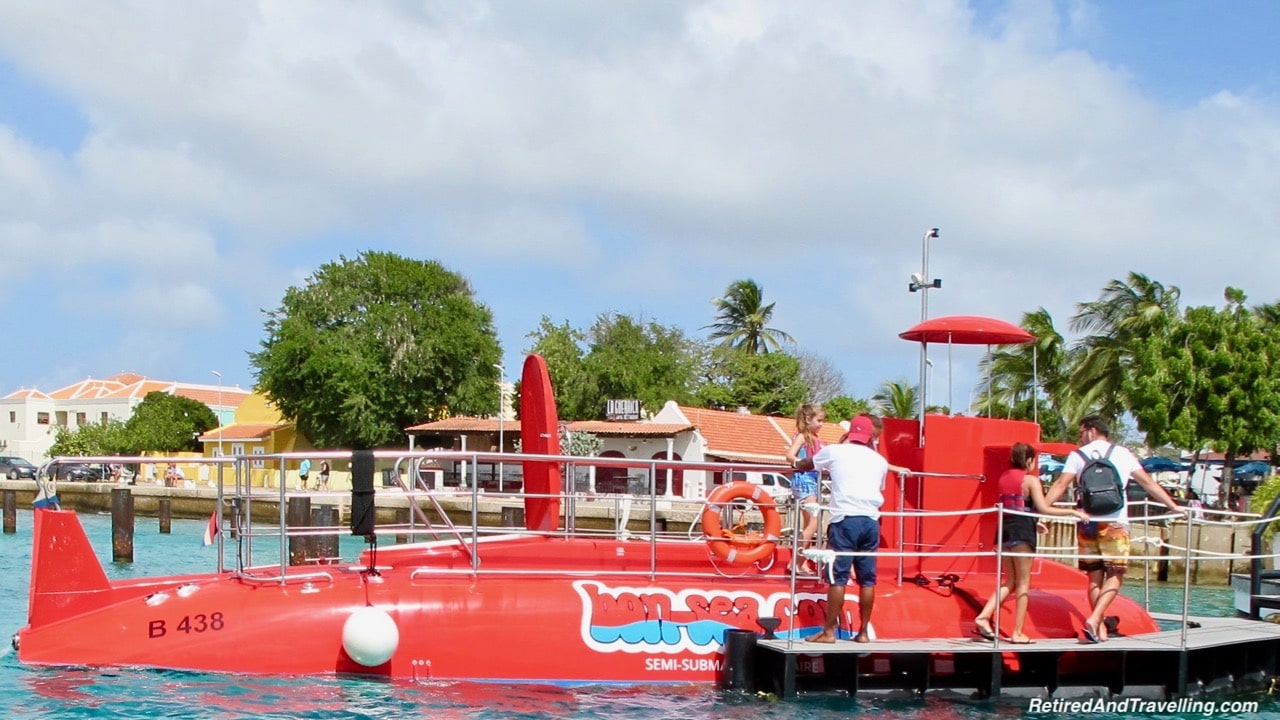 While we explored town, we looked at renting an electric bike, scooter or ATV to tour the island. It was so hot, we decided we might pass on that. A short stop for dark chocolate gelato let us cool down while we planned our day to head underwater in Bonaire. 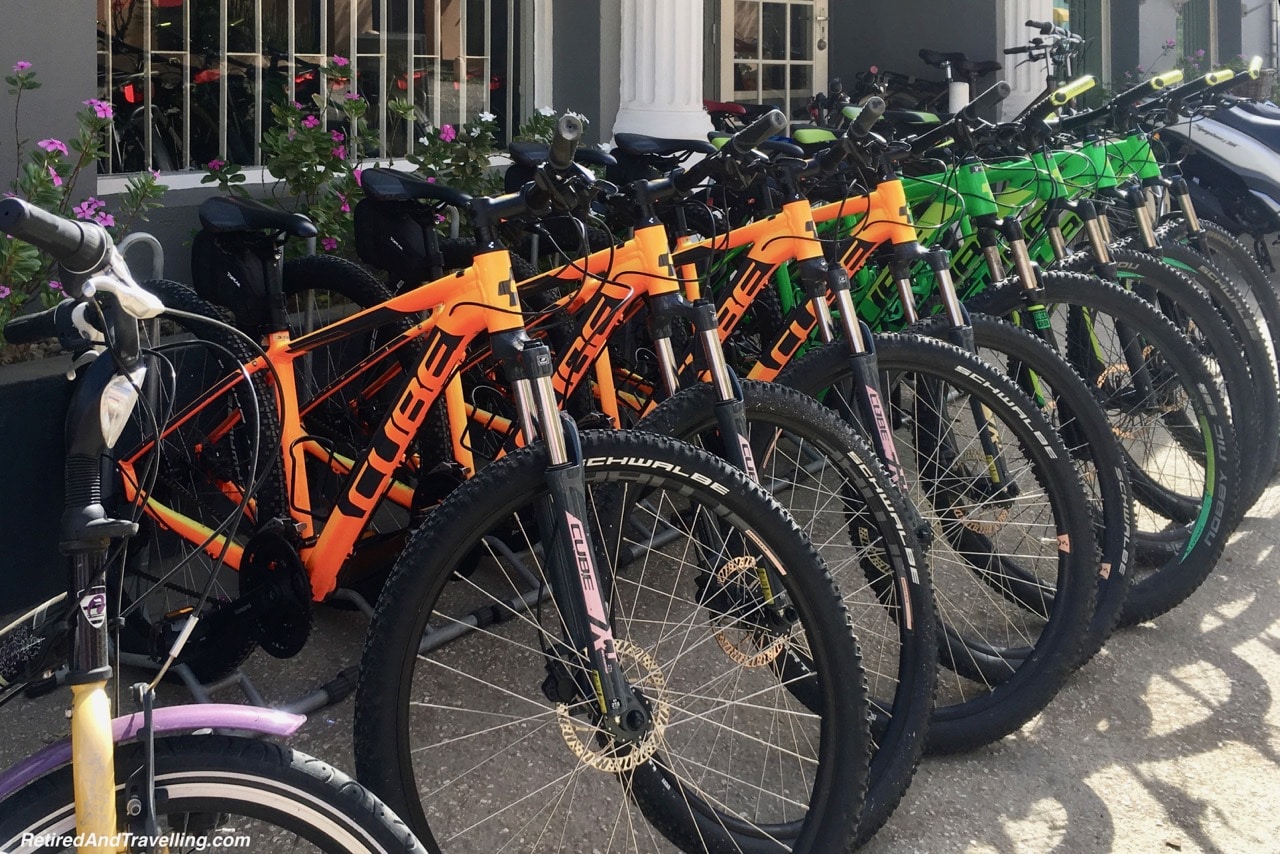 It was an easy 15 minute transit to the island. We saw the long stretches of white sand and the clear waters. It was definitely a great idea to head underwater in Bonaire. The boat driver pointed our the best path and spot for us to snorkel on the island. 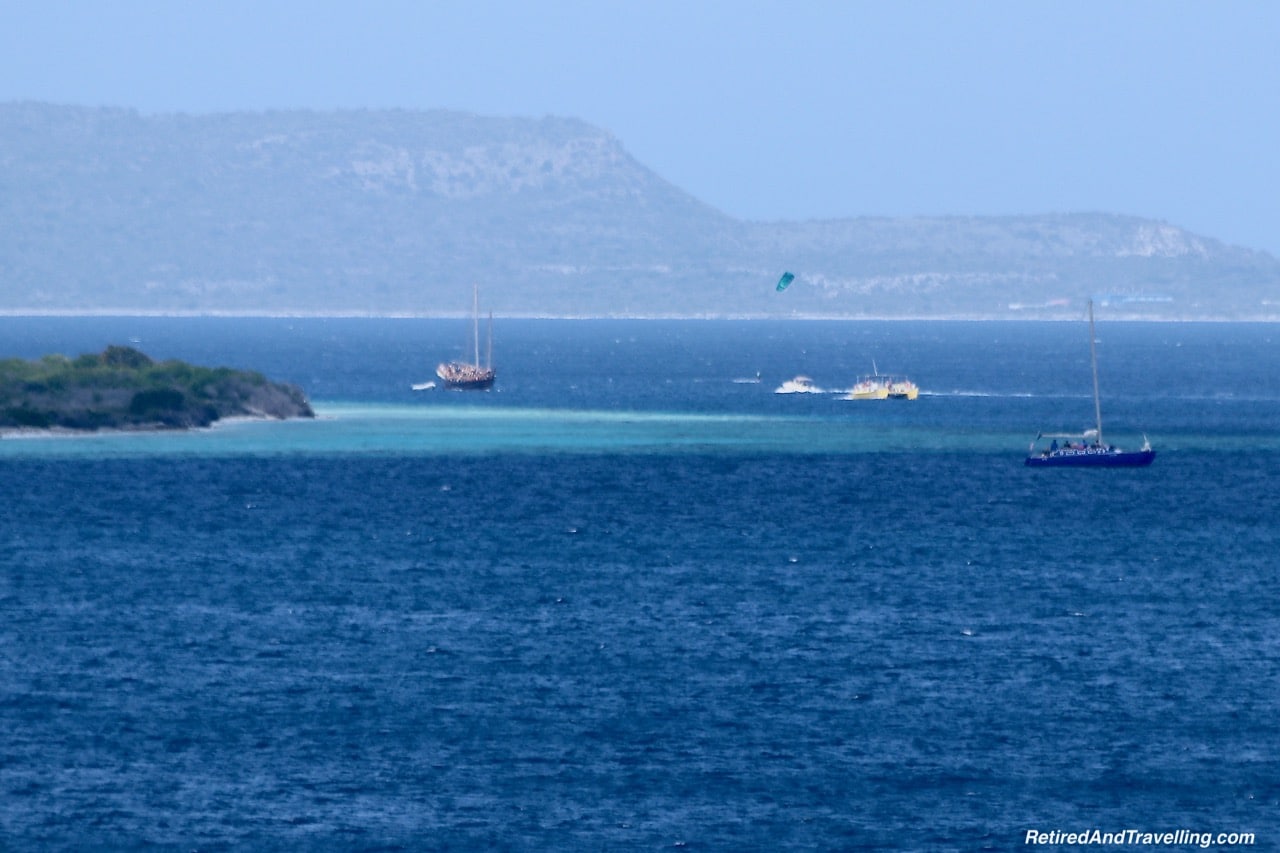 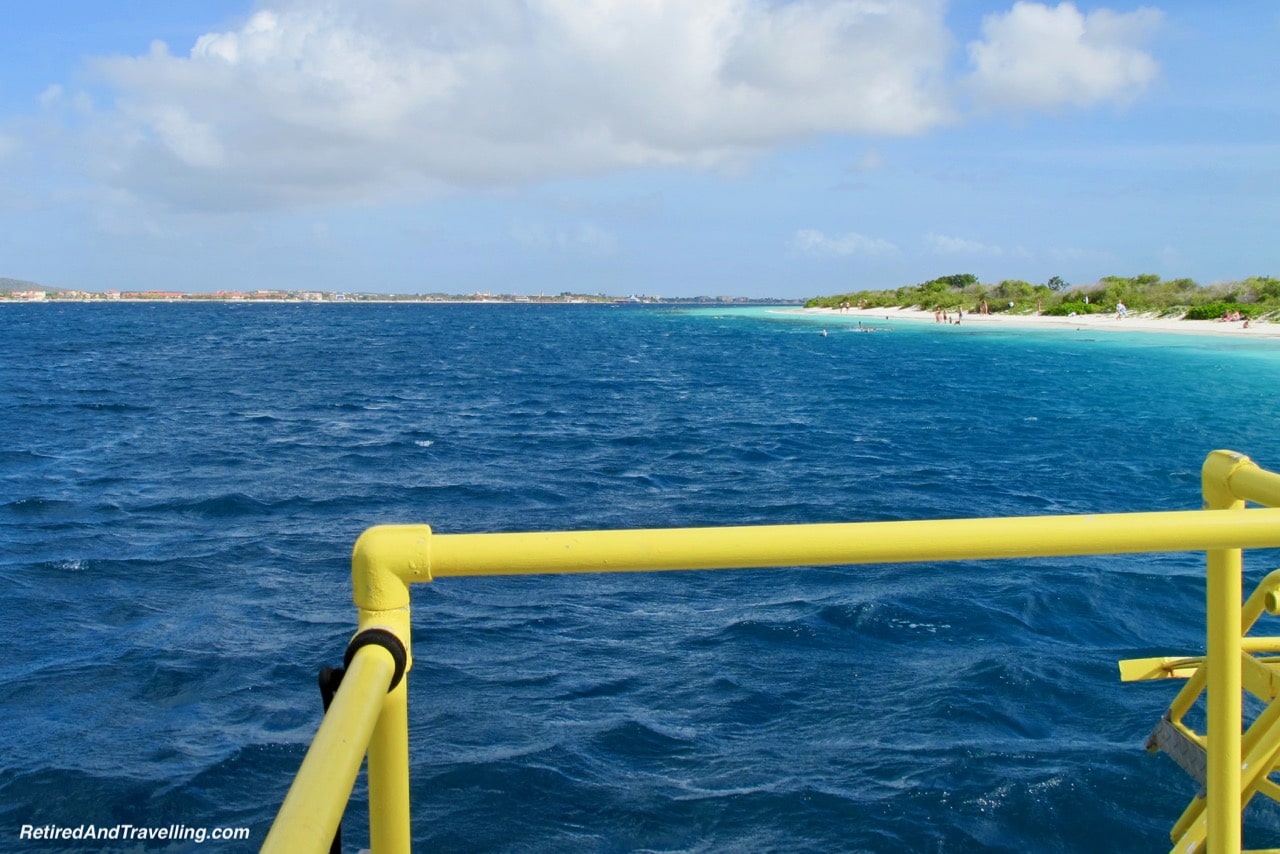 When the boat reached the island, we climbed down a ladder into the water. We carried all of our own snorkelling gear with us. But snorkel equipment was available for rent on the island. 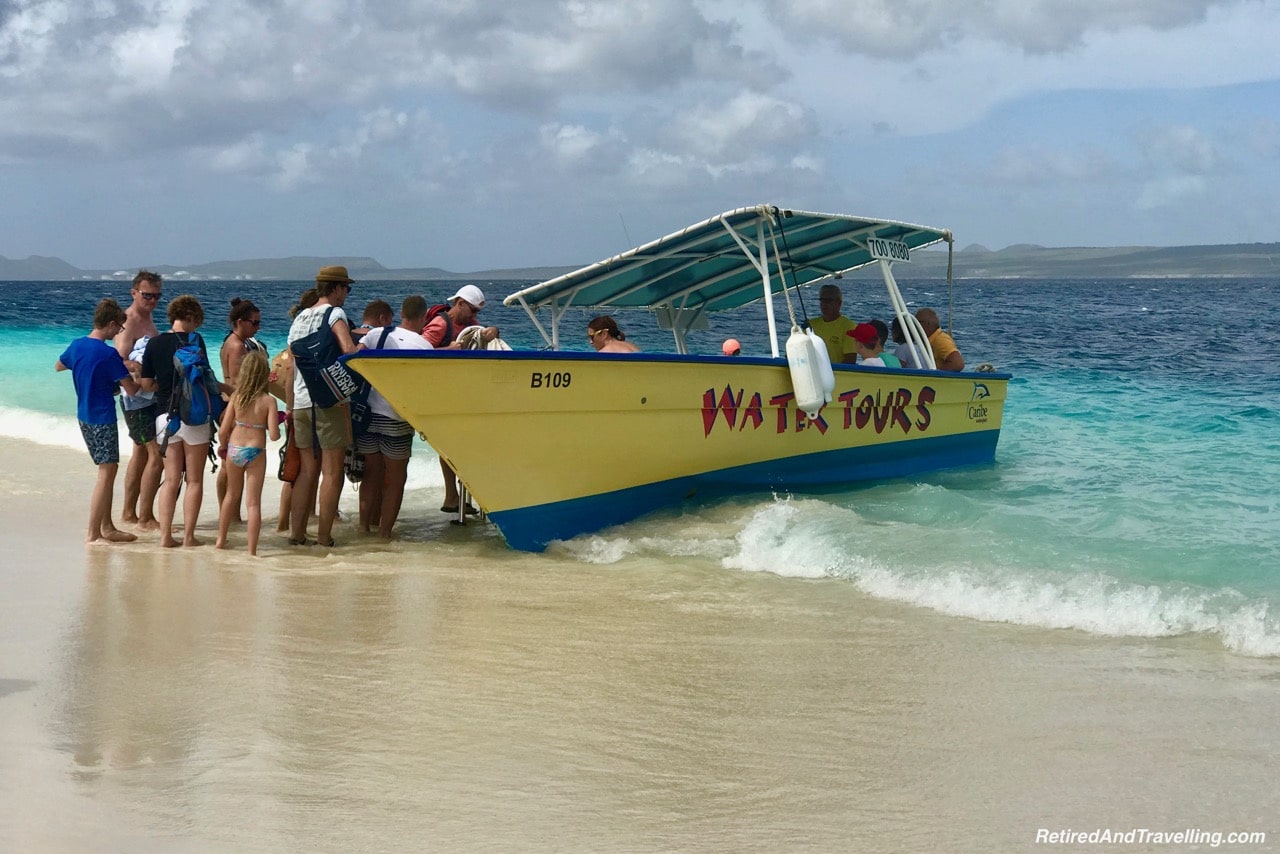 Snorkel gear rental was the only service on the island. My thought of relaxing with an ice cold beer after we snorkelled would have to wait until we got back to the main port. Make sure you pack drinks and maybe some snacks if you visit Klein Bonaire!

A long walk along the beach got us to a spot right where the coral dropped off into the sea. It was quite rough walk over coral to get into the water. But it was a short swim to hit the reef. 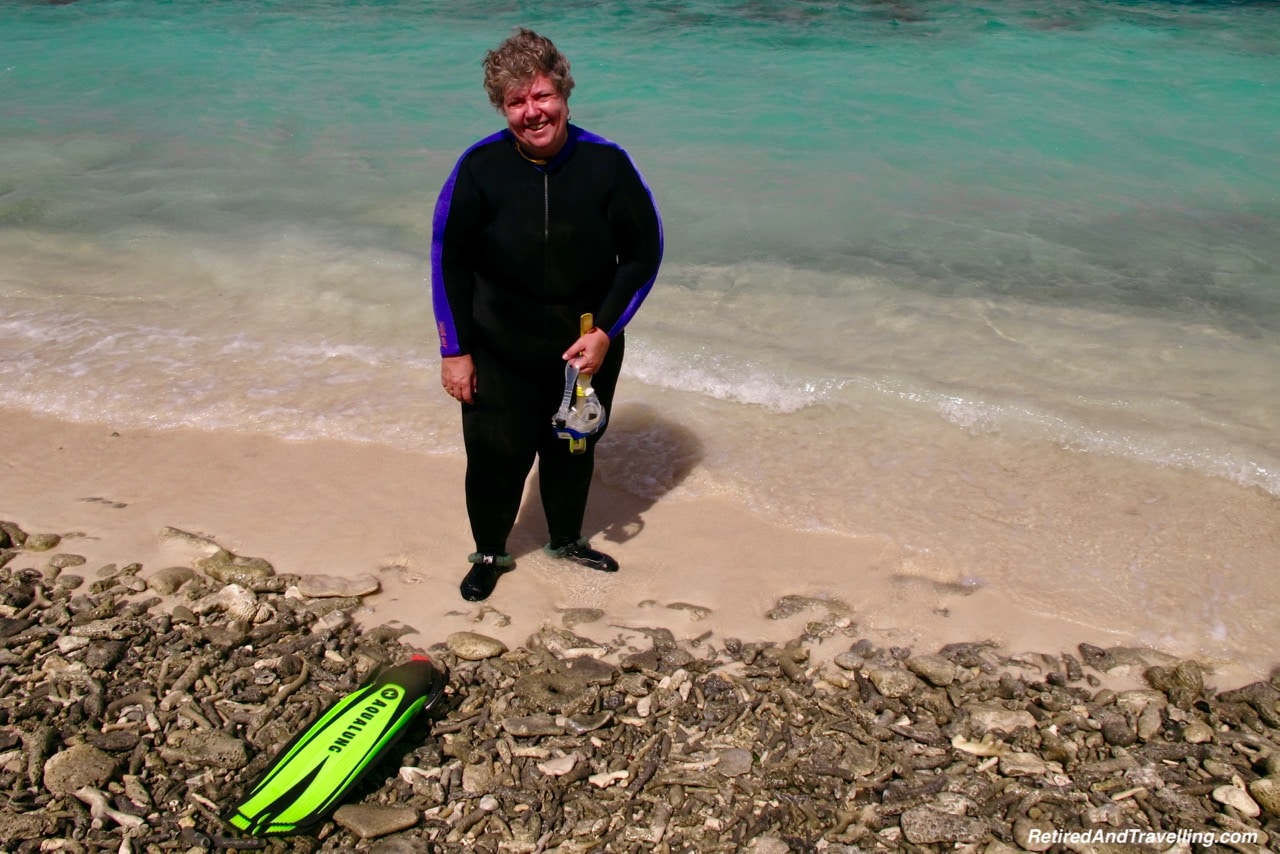 We were immediately met with a large curious French angel fish. I was sure that a pair were going to come up for a kiss. We found several different colourings of angel fish while we snorkelled. 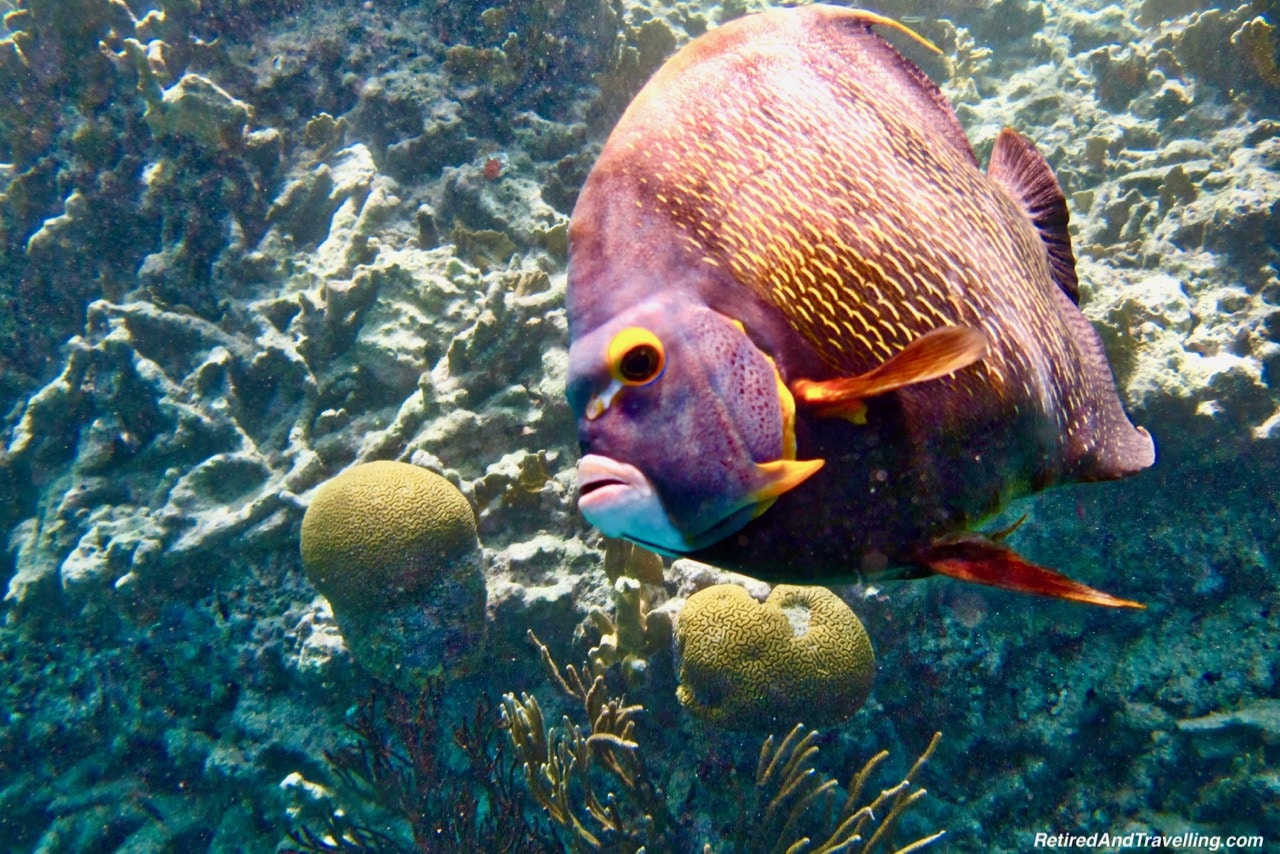 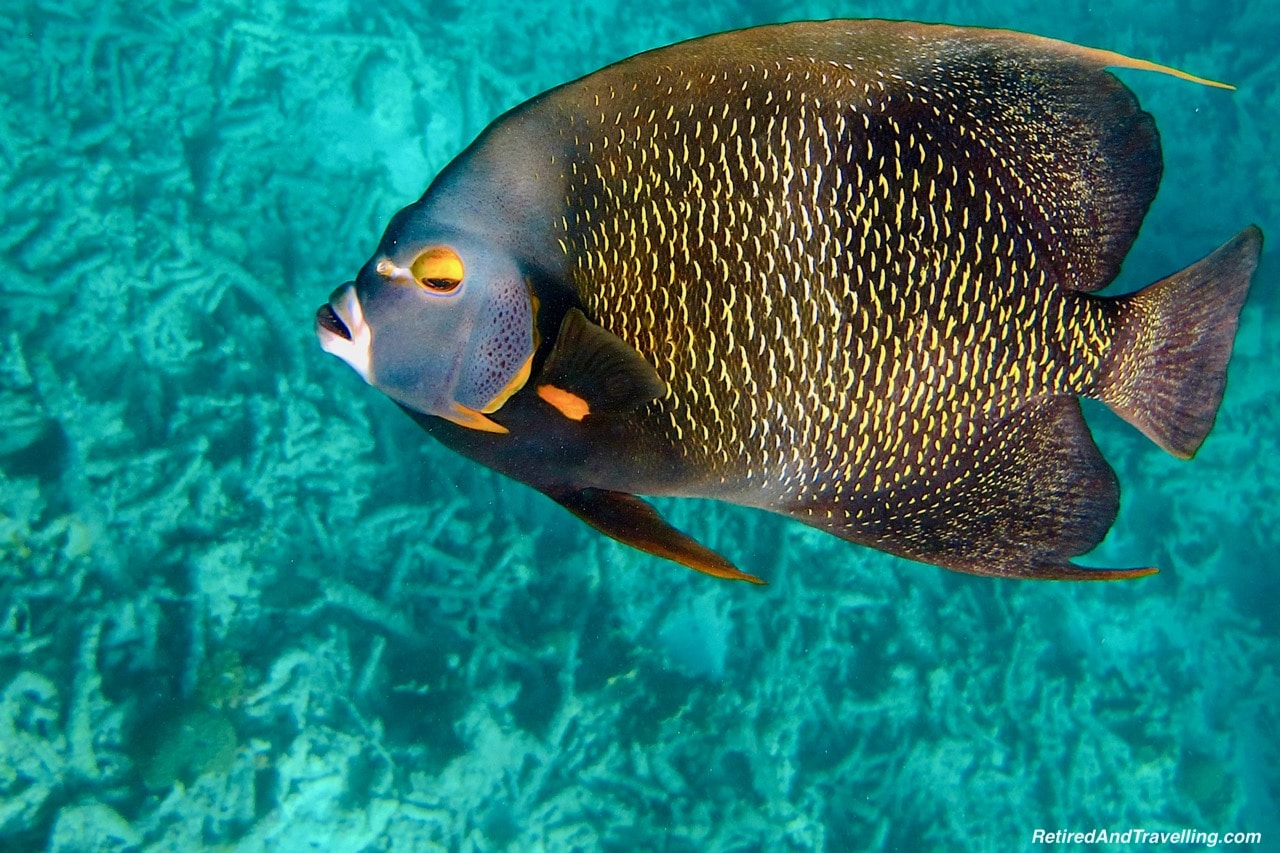 There was a large variety of different types of coral on the reef. Brain coral sat in the shallower water. In places the coral was vibrant and colourful. In many others, a light layer of sand dulled the colour. David had a fascination with Christmas tree worms and he found several great samples. 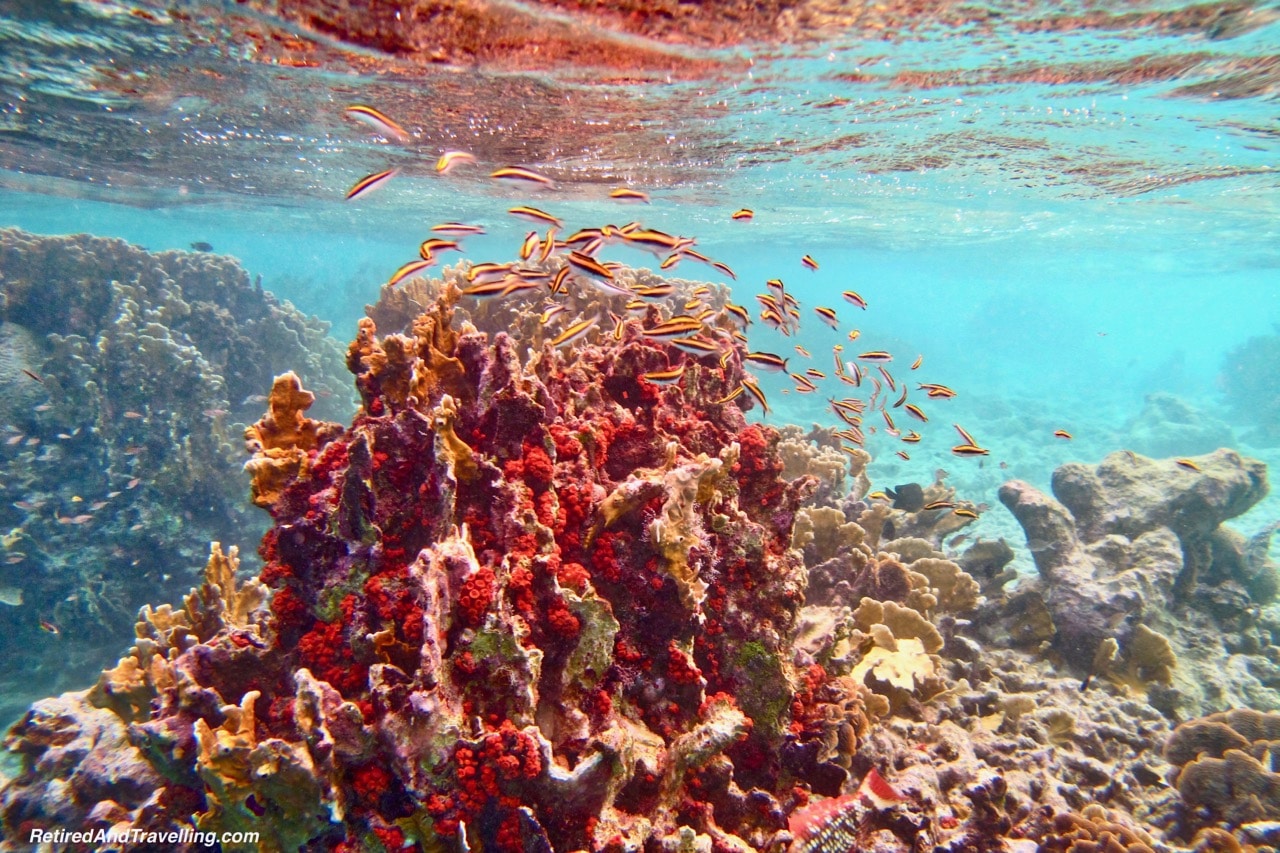 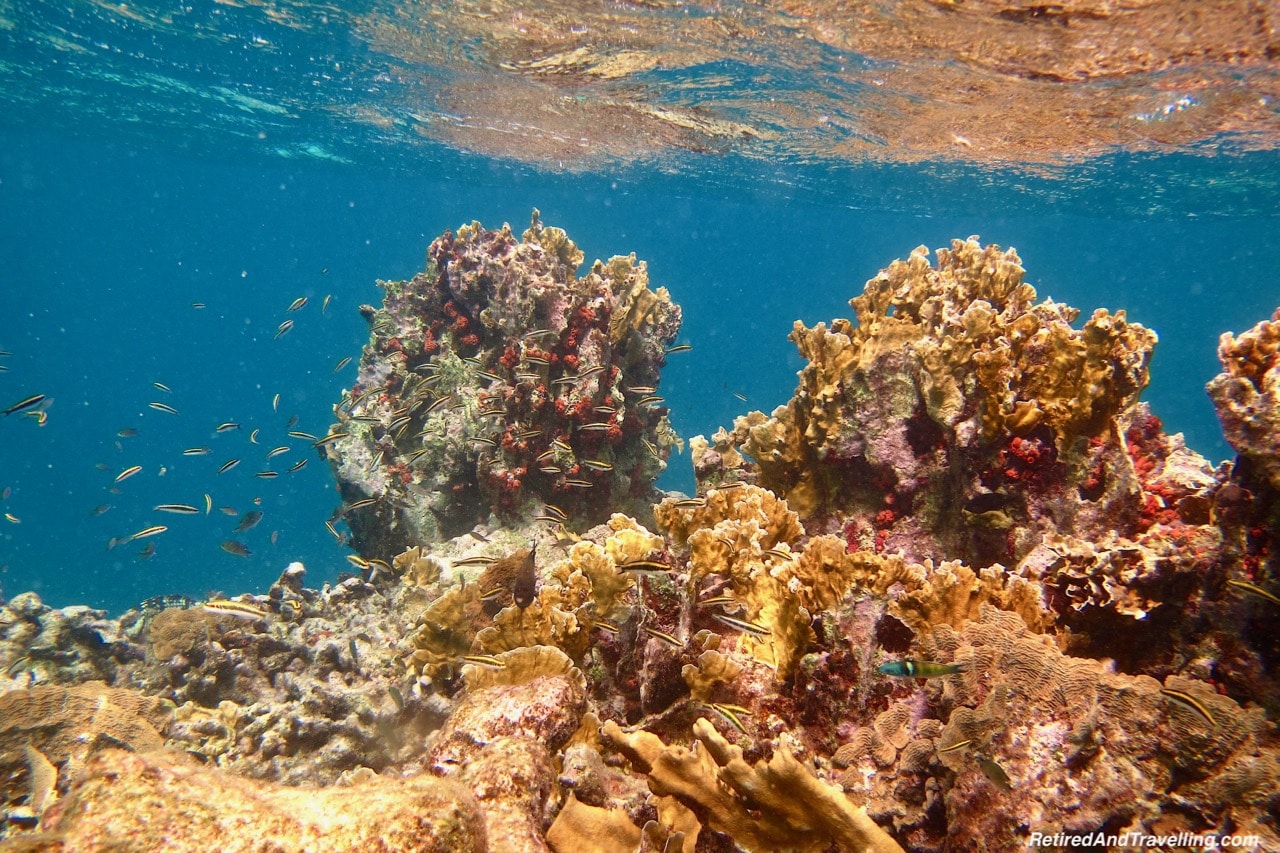 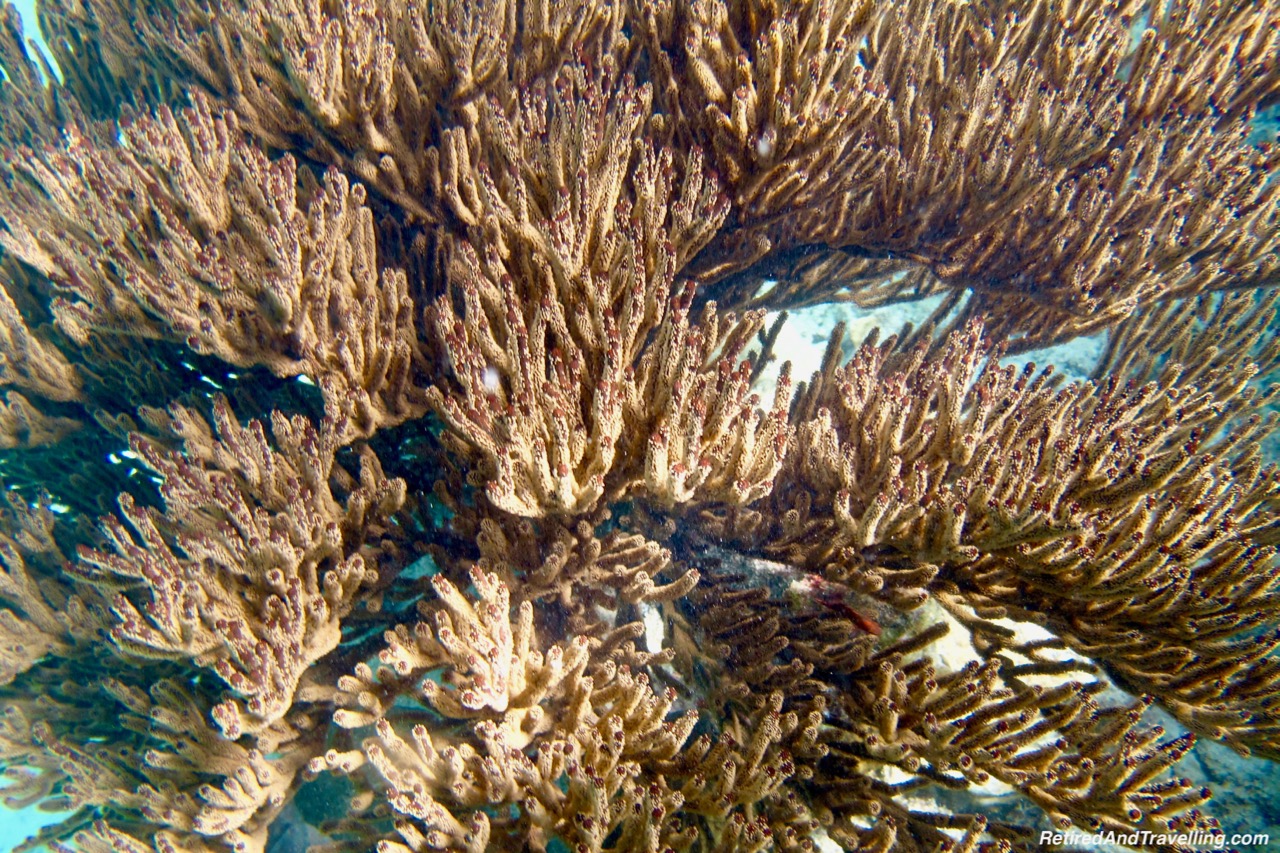 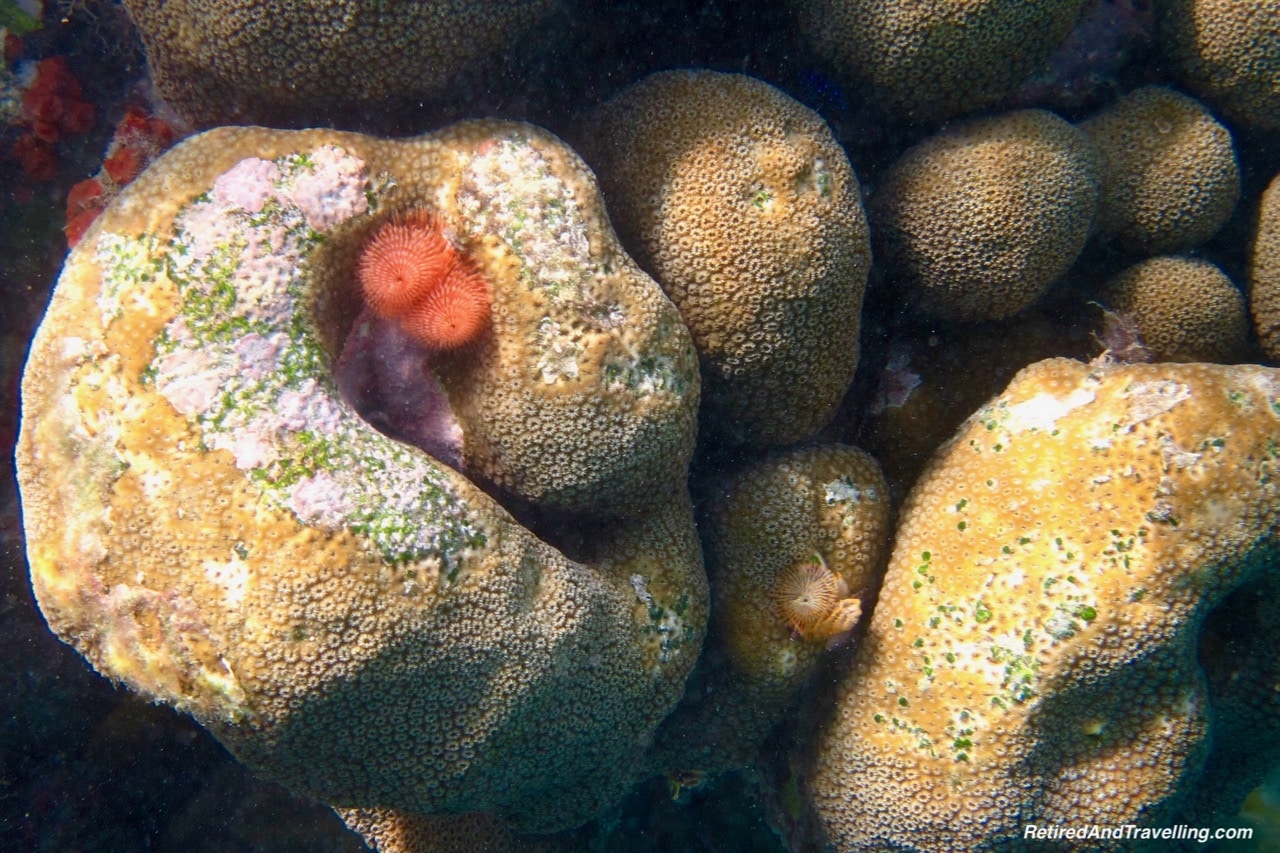 As we drifted with the current, we were joined by different fish. We were not sure who was watching who. When I opened the bag of dried bread sticks, the fish were more aggressive at coming close. I have been swarmed before when feeding fish underwater. So I was cautious about how fast I was feeding. 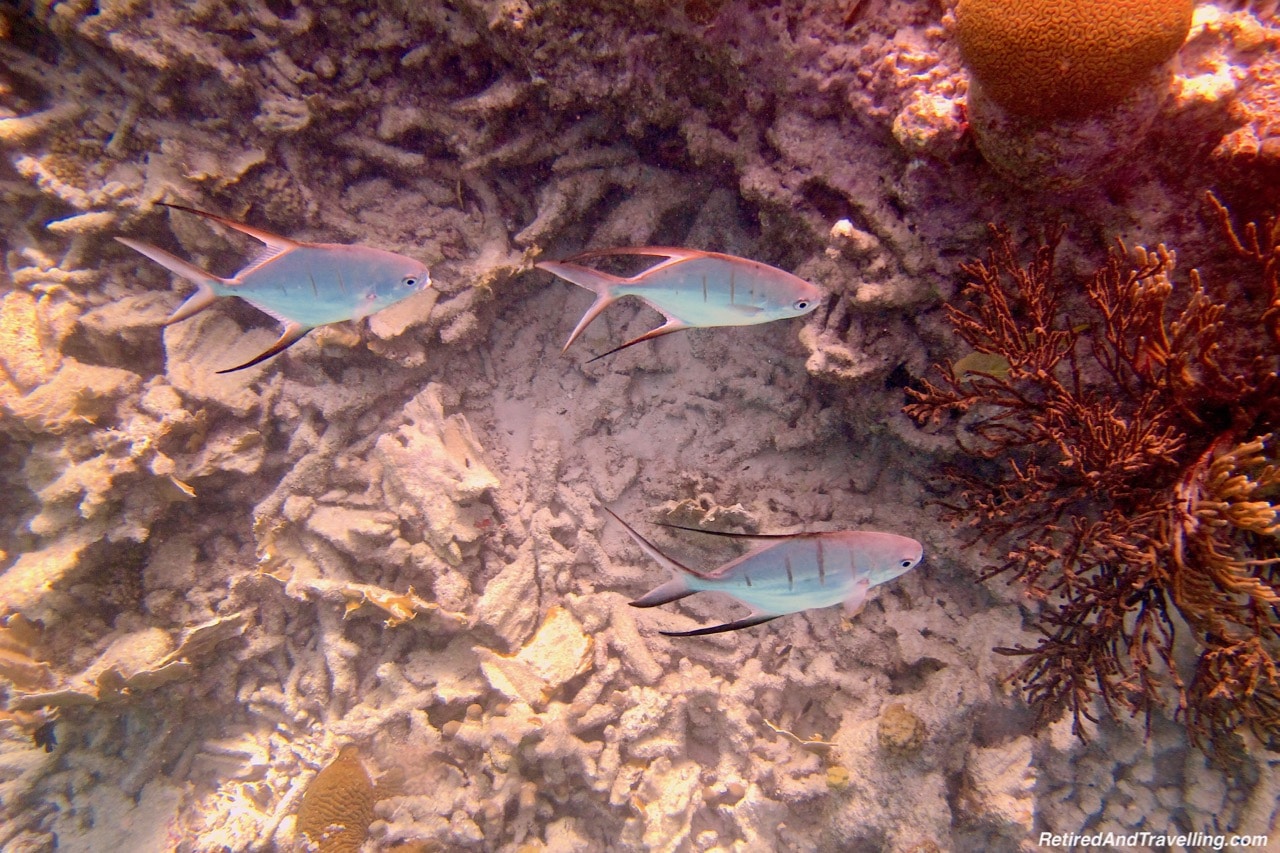 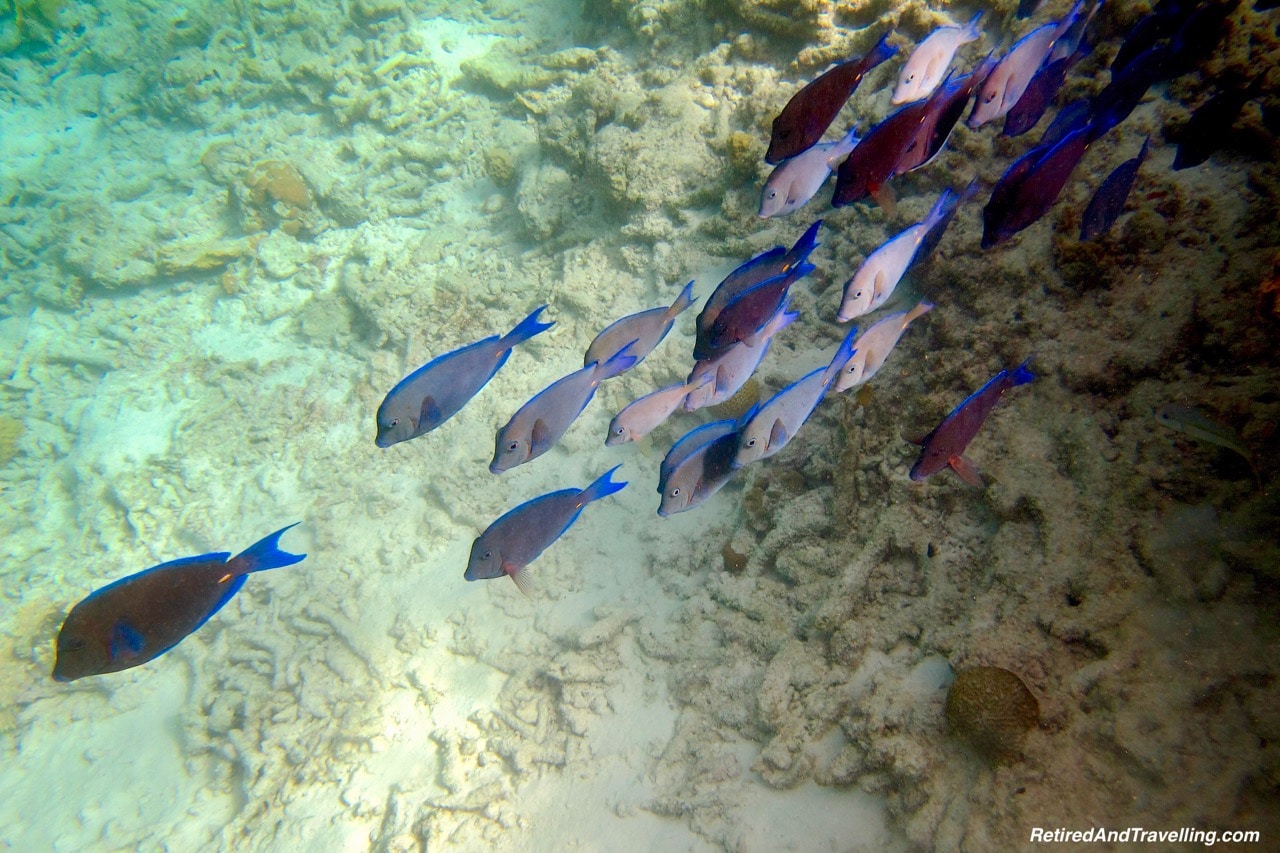 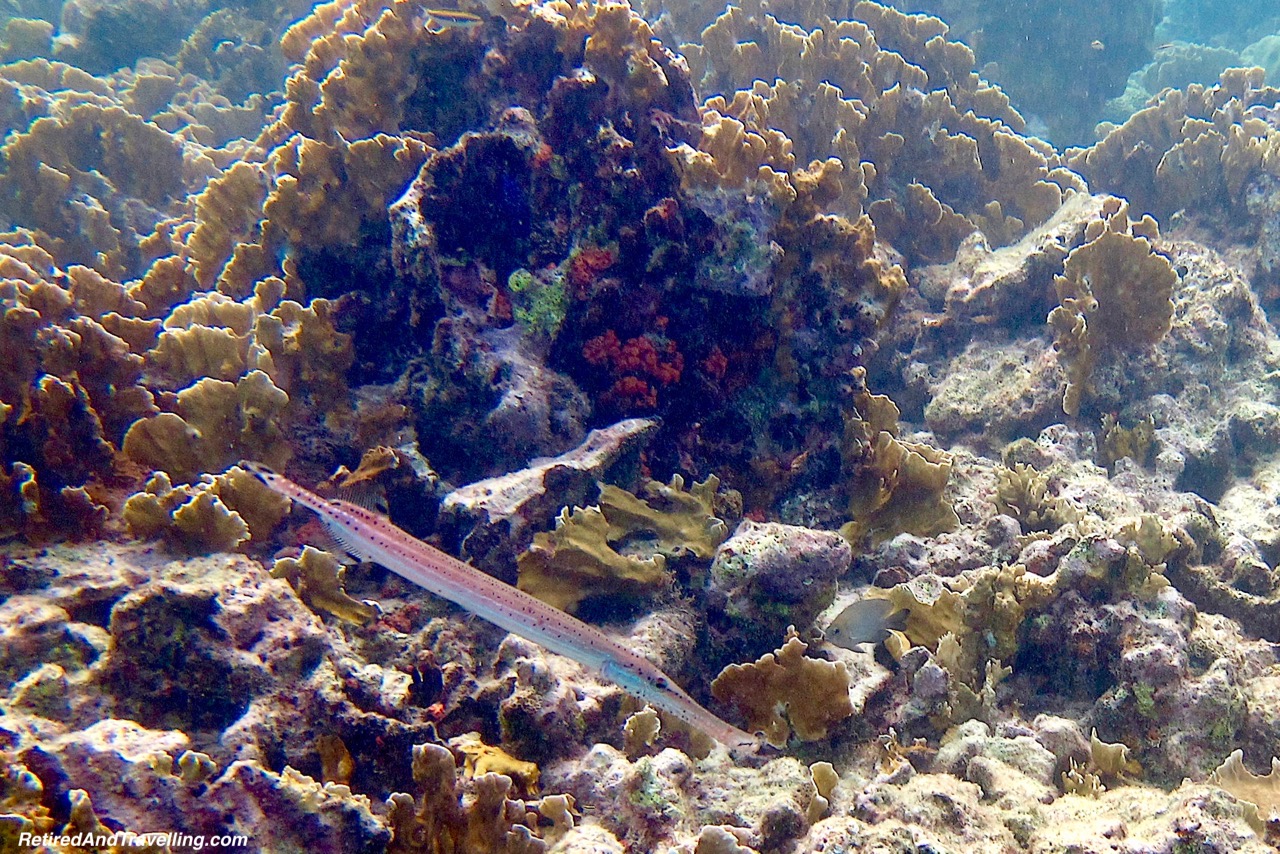 We turned around and snorkelled slowly back to our starting point. Several schools of fish swam by. We walked back to the main beach and waited for the next water taxi back to the main dock. This time we got on the bigger boat. Much easier to climb into! 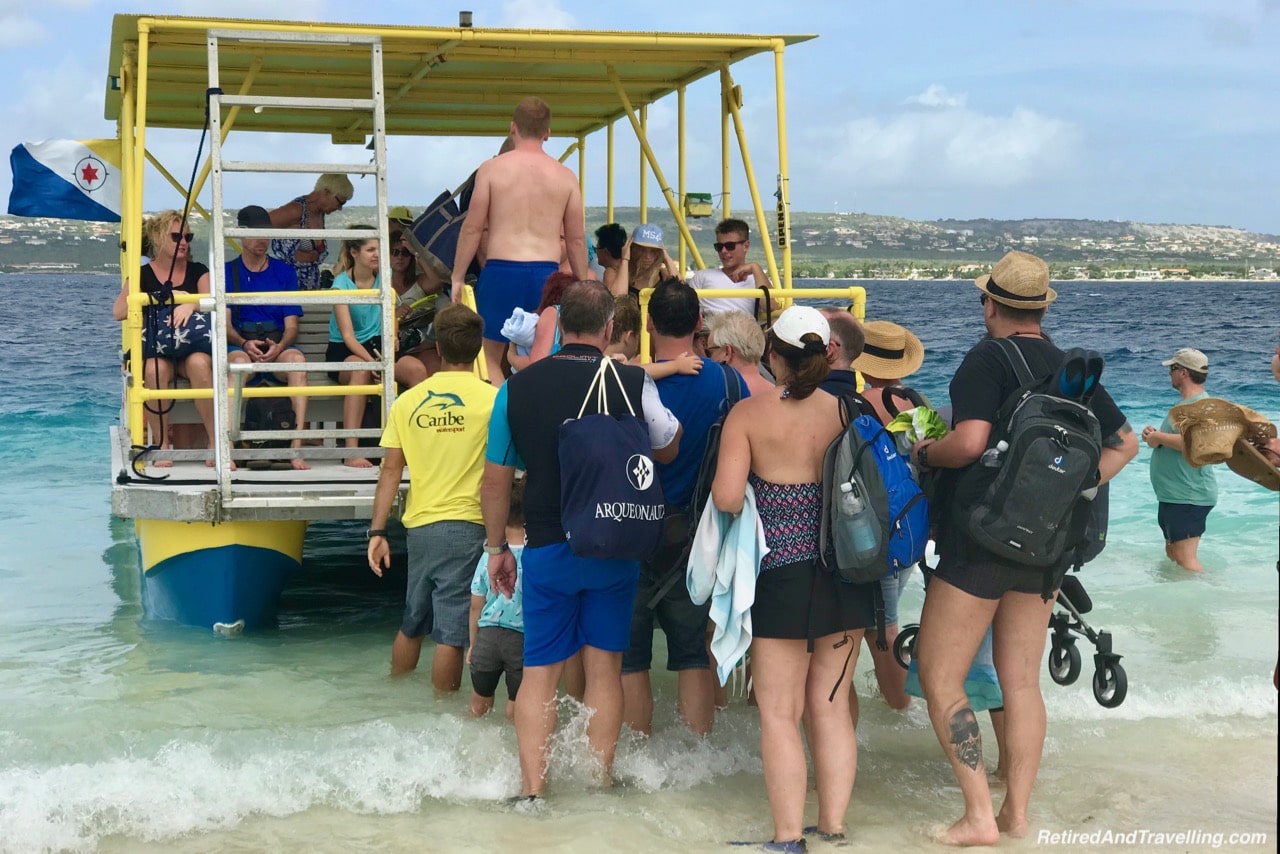 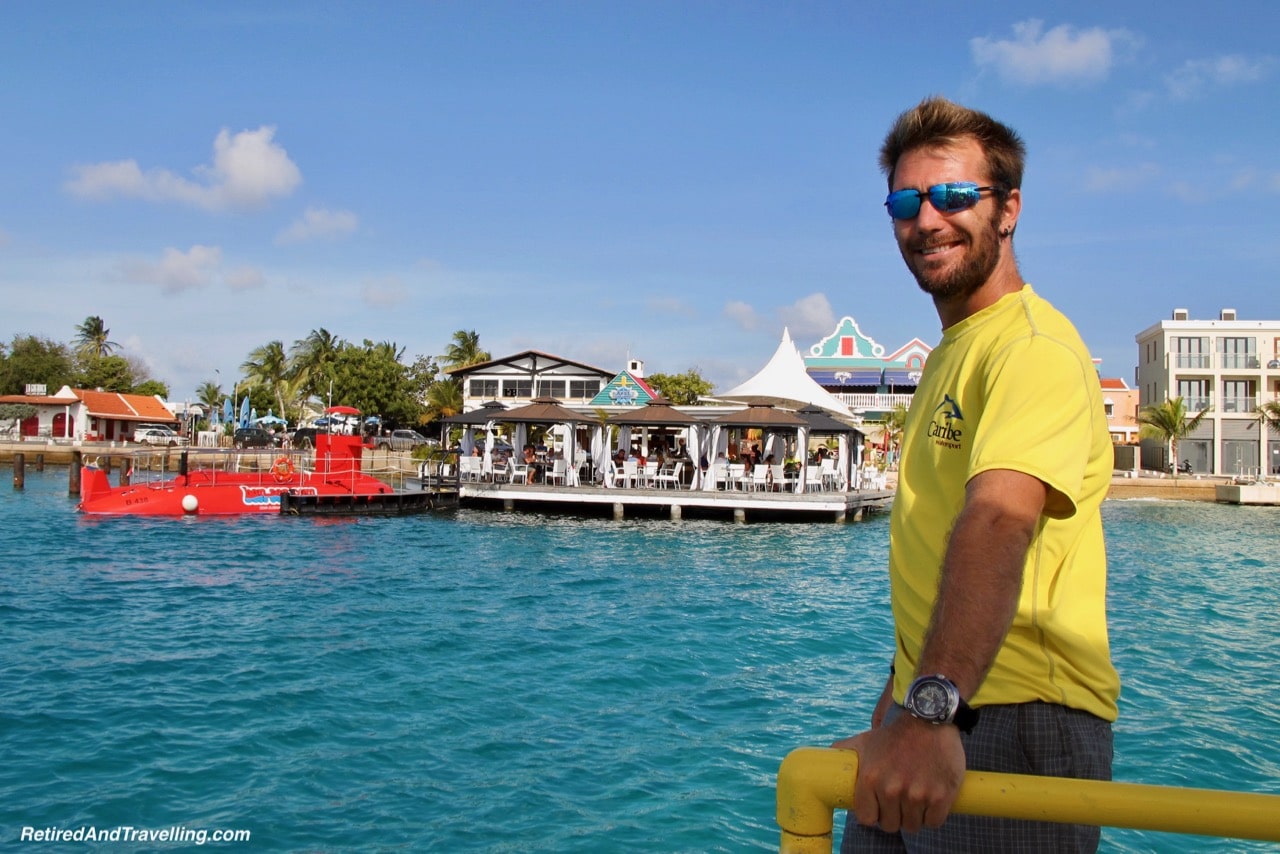 We were very glad we had decided to head underwater in Bonaire. The high winds had certainly caused a light layer of sand to cover much of the coral. But overall the water visibility was so much better than when we visited Aruba.

We Would Definitely Return To Bonaire

Even though we saw just a small part of Bonaire, we liked the vibe. Kralendijk seemed much less developed than the other ports we visited. But that was just perfect for us. There are lots of options for renting transportation to take a tour of the island. Head out early in the day before it gets too hot!

When next we visit to ABC islands, we will definitely look at returning to head underwater in Bonaire. If you just want to snorkel, there is so much to see in shallow water. Snorkelling showed us how great the potential would be if we went back to scuba dive.  It certainly made us anticipate scuba diving in St. Lucia!

The next stop on our cruise was in Grenada.  We had a very different underwater adventure planned!

Did you head underwater in Bonaire? Did you snorkel or scuba dive? What was your favourite spot? 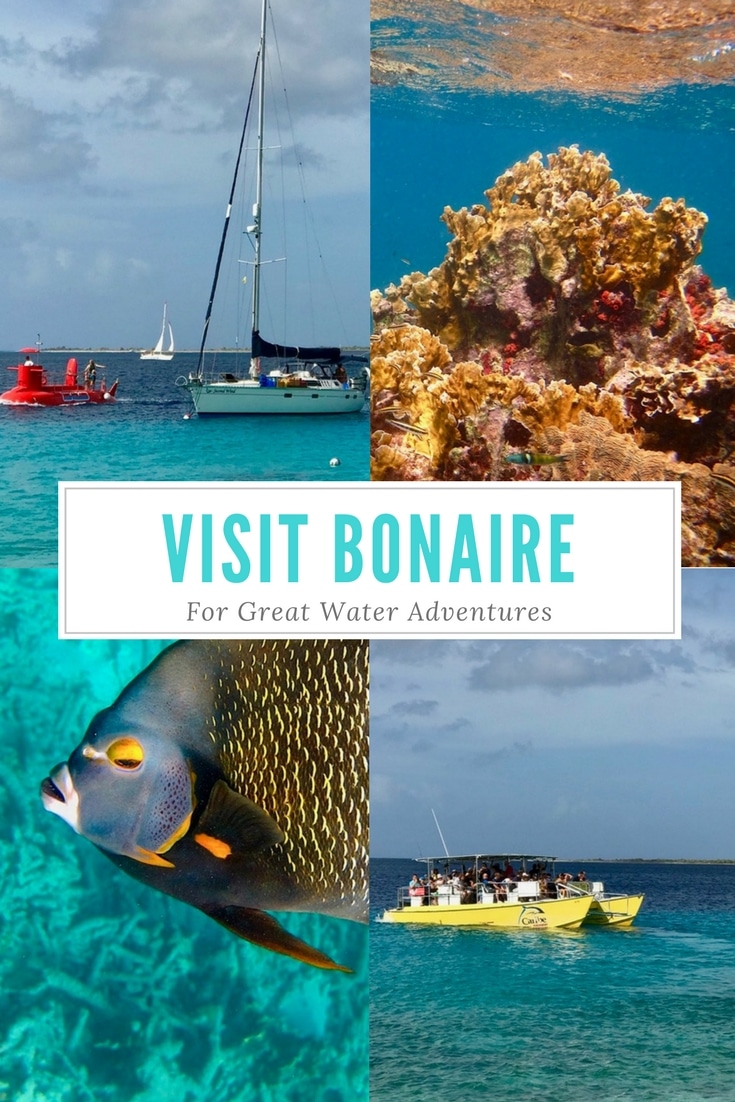 The Hills and Valleys of Madeira

Our First Stop In Portugal We had really loved our visit to the Canary Islands. This stop in Funchal, Madeira would be yet another volcanic island in the long chain that sits in the North […]

What We Learned About Customer Service In Portugal Every new discovery was a delight as we travelled for 4 weeks in Portugal. We stayed in 11 different hotels. But we were so delighted with the […]

We would love if you could share this!
5
5
Shares

Stay in Darling Harbour in Sydney

Close To Everything When You Stay In Darling Harbour Having never visited before, we were not sure where to stay for a week in Sydney. After considering several spots closer to Circular Quay and the […]