Our First Glimpse of Israel

We visited Israel after our week in Greece. Our first tour in Israel took us to visit Masada and the Dead Sea. We got a little introduction to the religious and political history of Israel. Part of this because our guide was a bit lazy and did the bare minimum he could get away with. We would get a much more thorough education on our trip to Jerusalem the next day.

By the end of our journey in the Middle East, my geography knowledge improved significantly. Israel sits between 3 continents – Europe, Asia and Africa. While it is fought over for religious reasons, its gateway positioning made it a strategic landhold.

We arrived in the port in Haifa just as the sun was rising. People were up early for their long day tours. 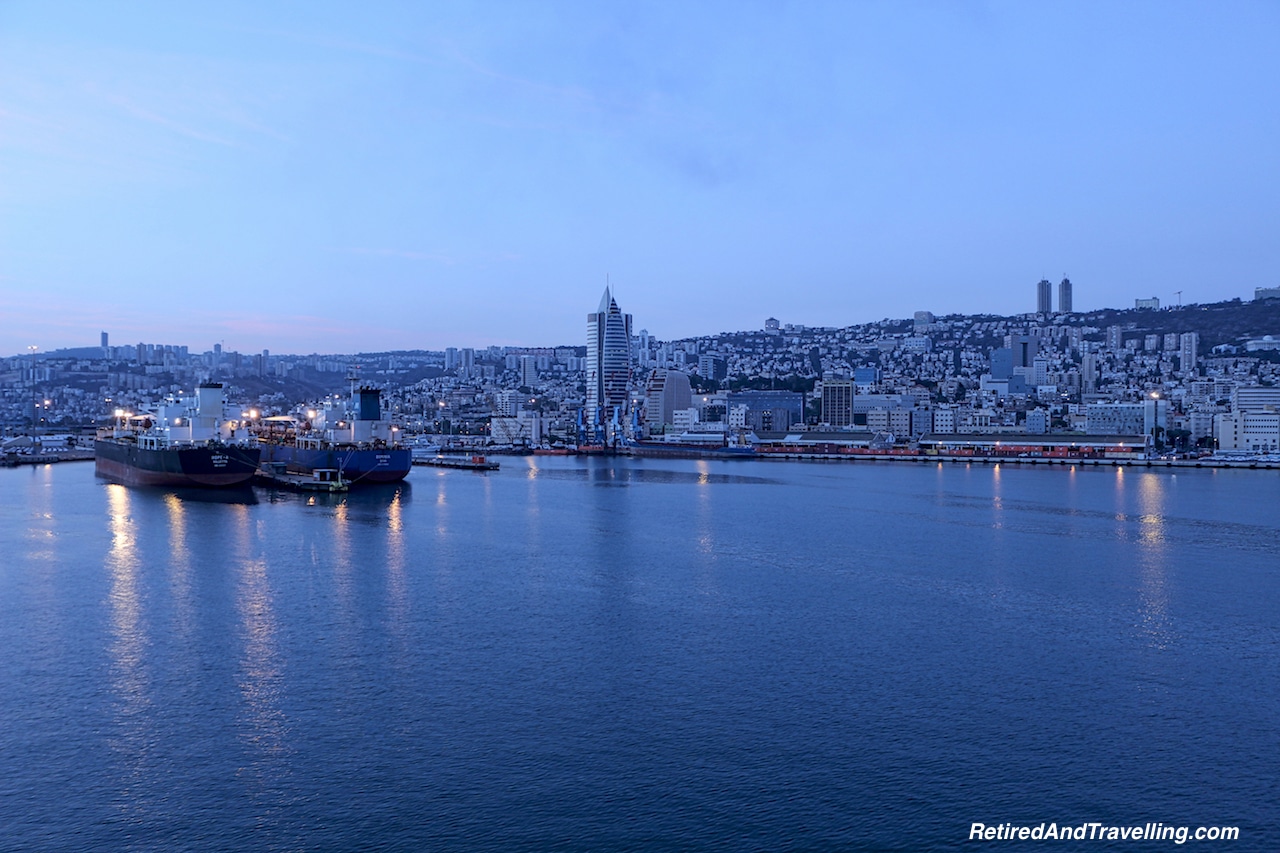 The Journey to Masada and the Dead Sea

This Masada and Dead Sea tour was the first of many very long bus rides to get to historical sites. It was 3 hours to get here and 4 hours to return. We saw the first of many checkpoints on this route. The first time we passed stops manned by machine guns was a reminder of the instability of the regions we passed through.

The trip through Haifa was quick. The bus cut across Israel and put us on the road in the Jordan Rift Valley. The fence dividing Israel from Jordan ran close to the road in places. On most of the drive we could see Jordan towns high in the hills. 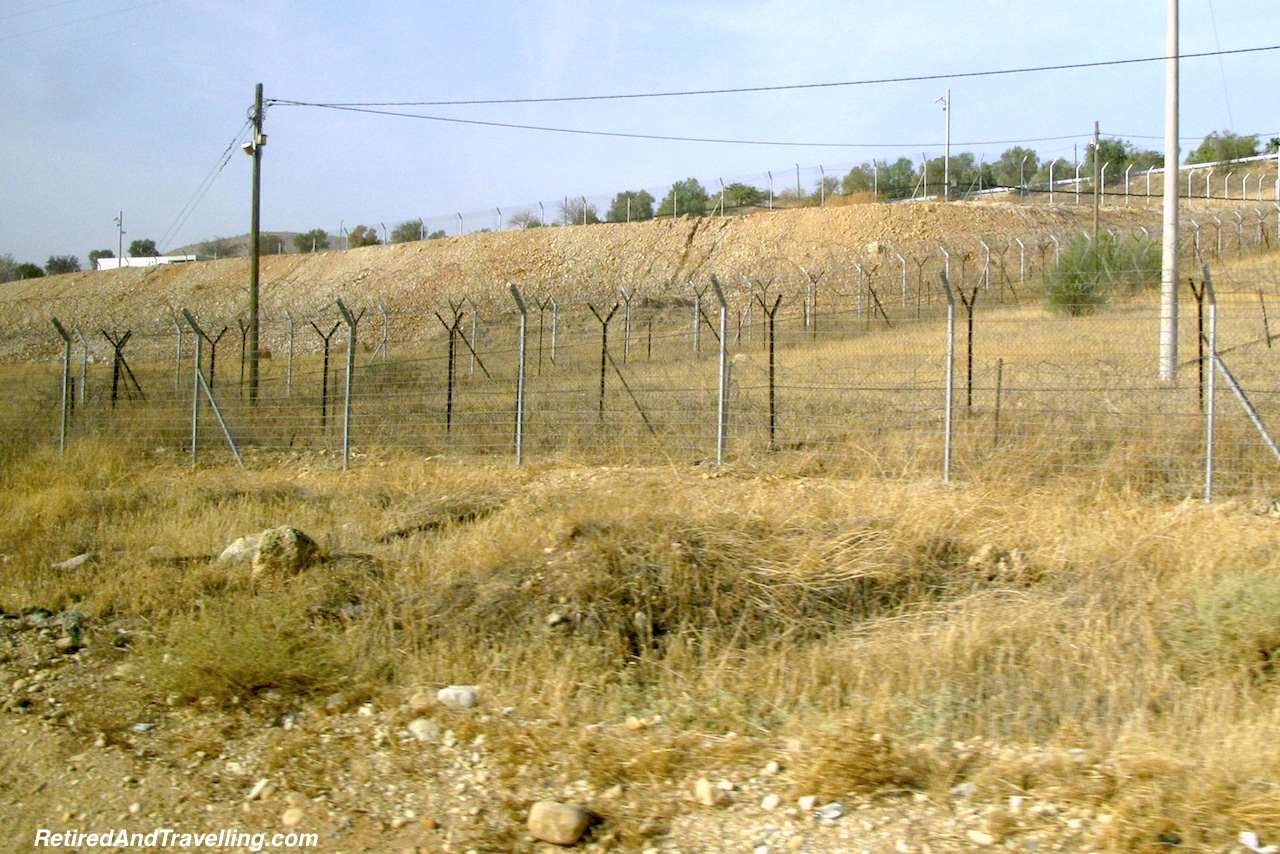 We were equipped with two options to get online. On this Masada and Dead Sea tour, I turned on my KnowRoaming international SIM and it was easily able to find a signal through most of our trip in the Israeli desert. On our visit to Jerusalem the next day, I would use my TEP Wireless hot spot to provide me with connectivity. Because of the time zone difference, I was not doing much social media interactions in real time. I was able to post some updates and sync my photos to the cloud on the long drives.

Traveling Through the Desert

Large tells (archaeological mounds) can be found all over the deserts. Conquering nations would bury the previous inhabitant’s sites, making larger and larger mounds. The biggest one we passed was Armageddon. One open trench showed the layers of different occupations. 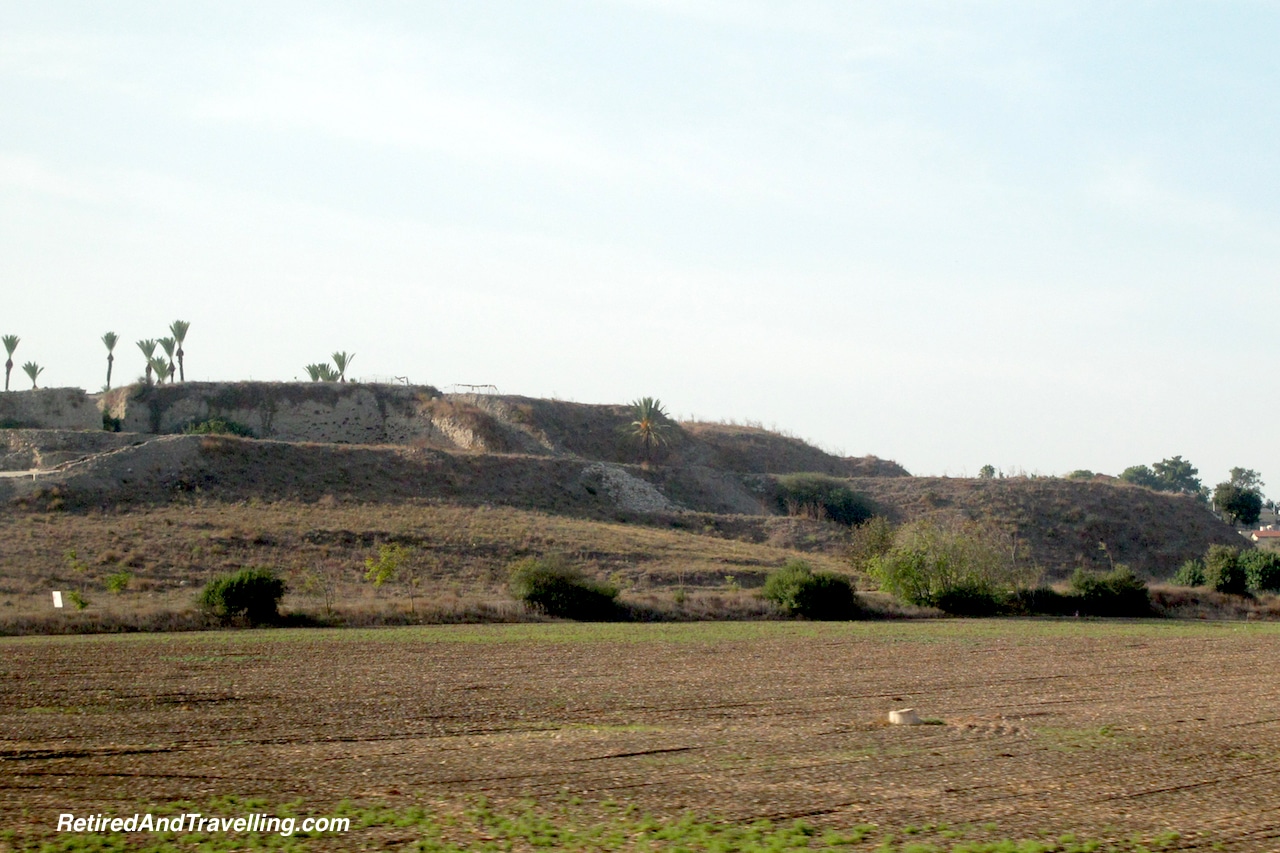 We passed through verdant farmland before the dry rock desert surrounded us. I had been expecting sand. But without blowing sand, it was an easy drive. The desert drive was decorated with art, highlighted with colourful flowers, populated with caves and the home of regular oases of date palms. 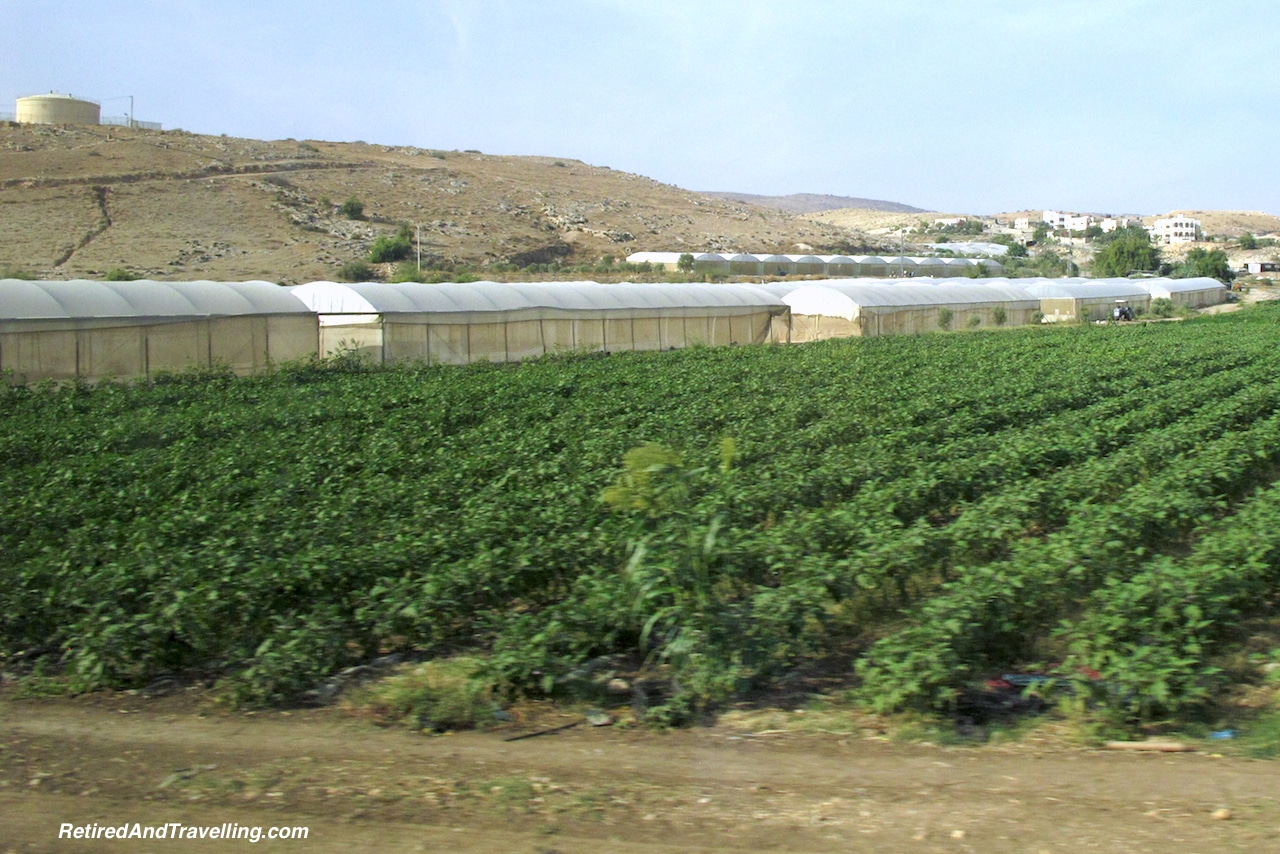 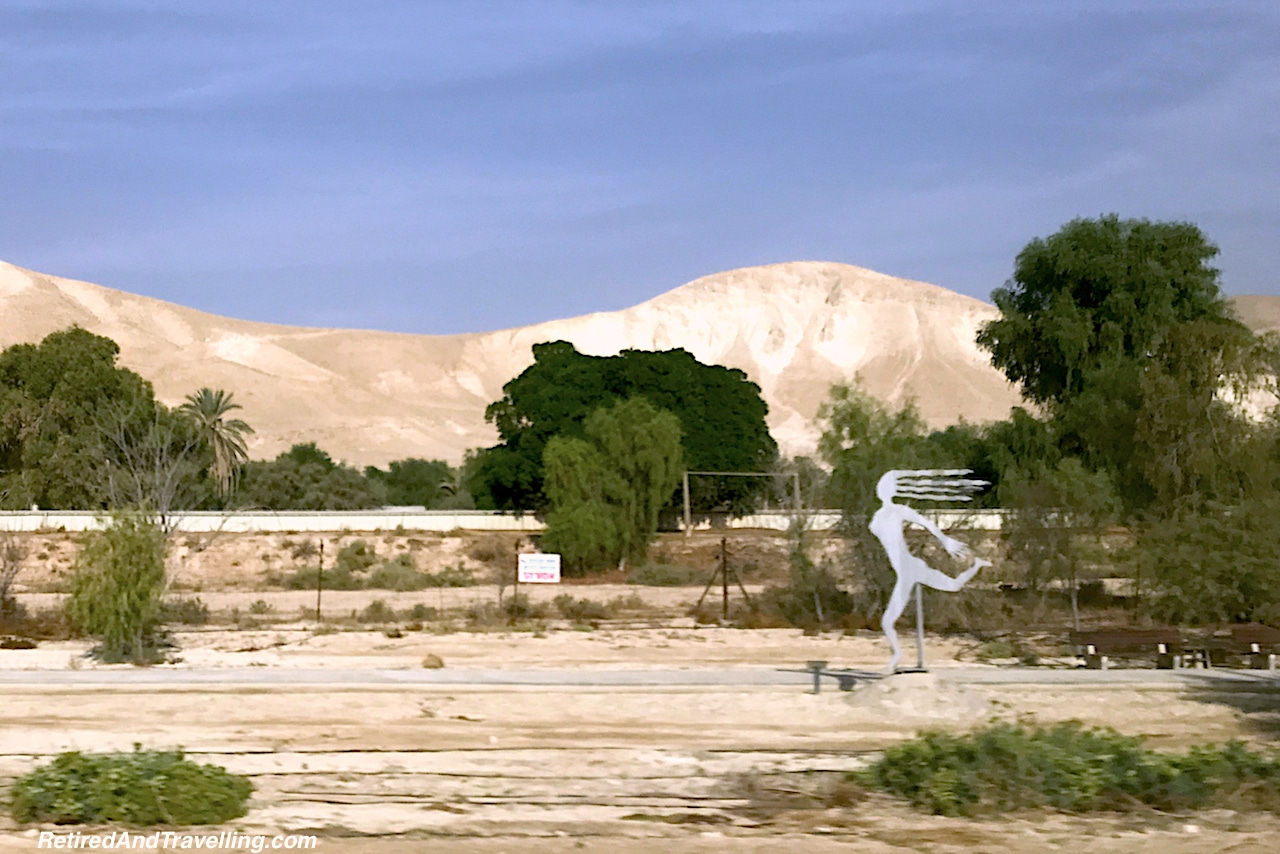 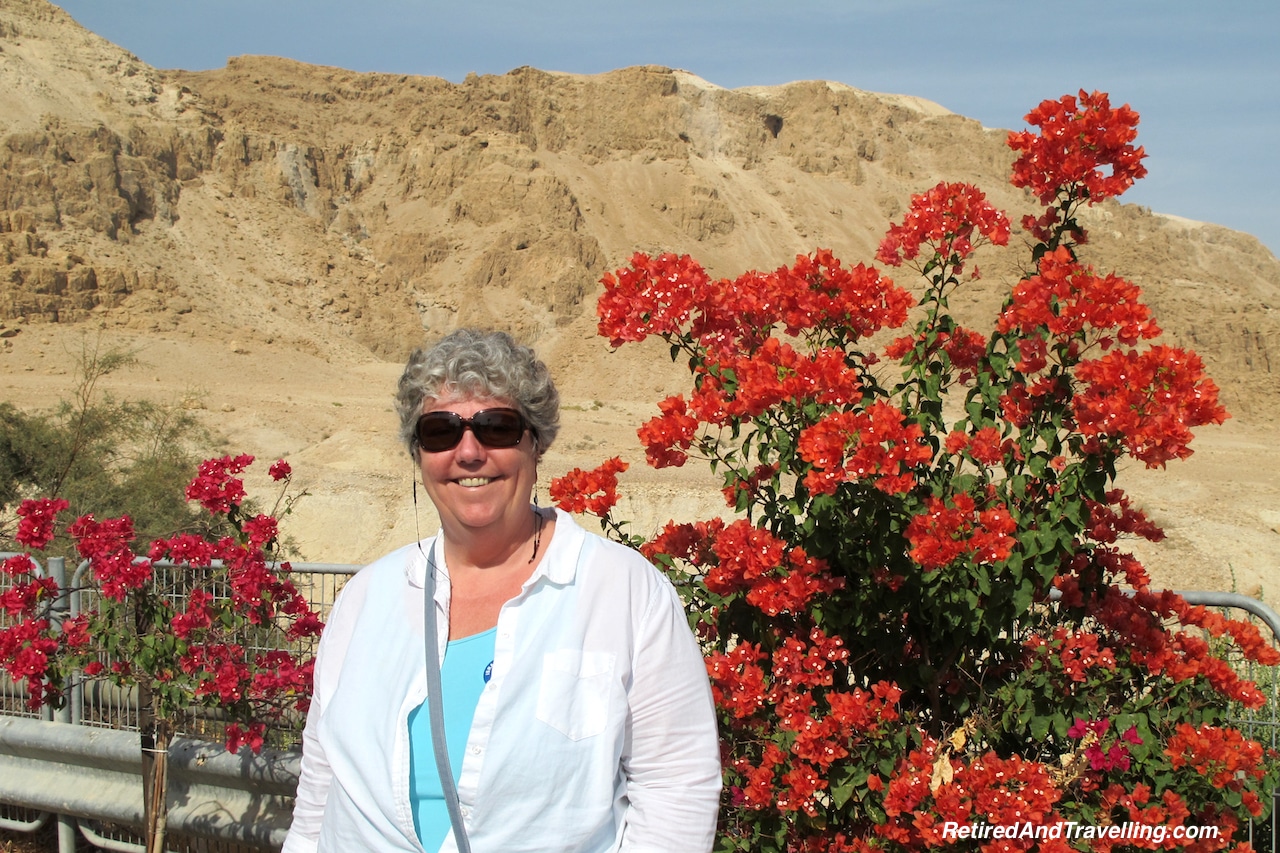 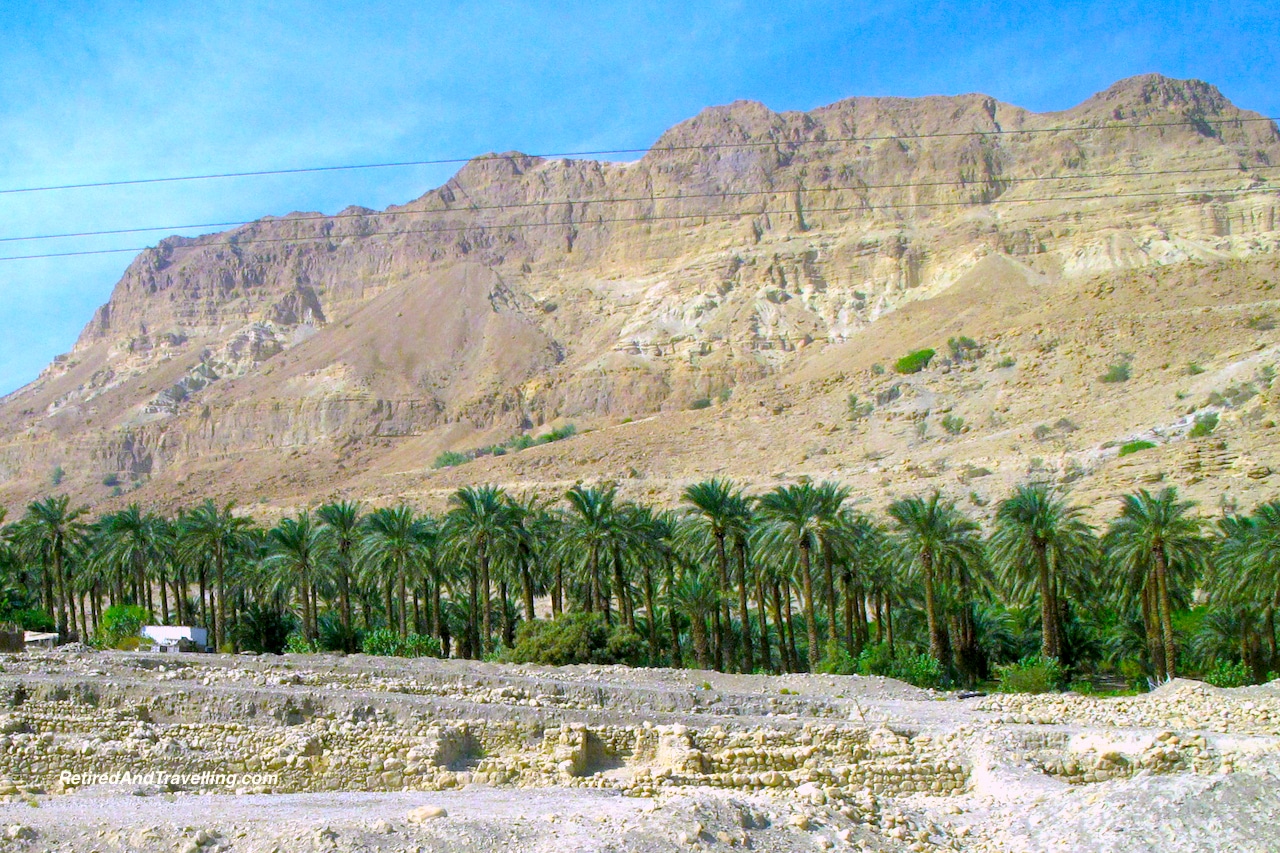 As we went through the Eilat oasis hoping to see the ibex desert animals. We did not stop but driving slowly by we could see the ibex hiding in the trees. The Dead Sea appeared in the distance and steadily grew in size.

We stopped at Masada for a tour with the guide. You could see Masada as we approached sitting high on the plateau 1,300 feet above the Dead Sea. Herod the Great built two palaces and a large fortress in case of a revolt. 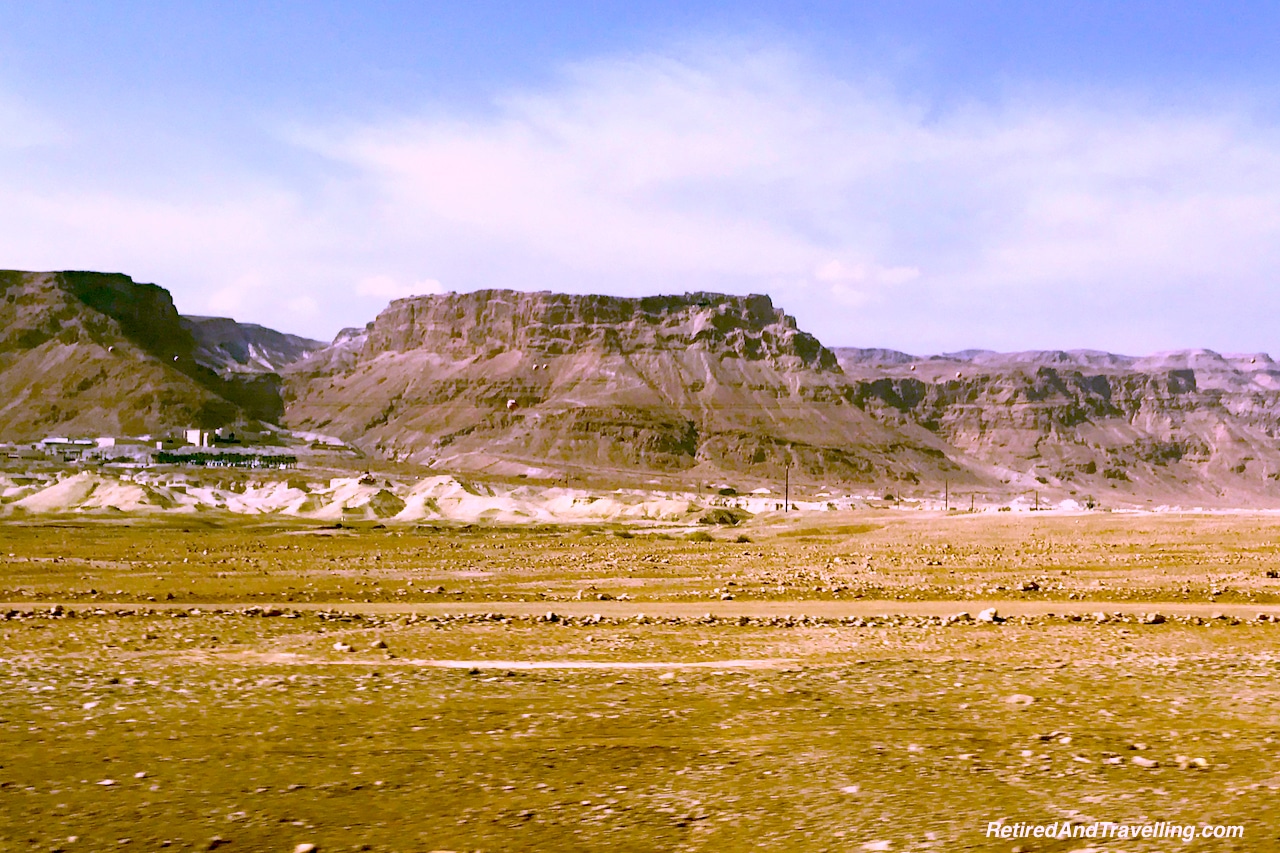 We stopped in the visitor centre to see an artist view of the site before ascending to the top by cable car. Some groups were given the option to hike down after the tour but our guide was keeping us to a tight schedule. 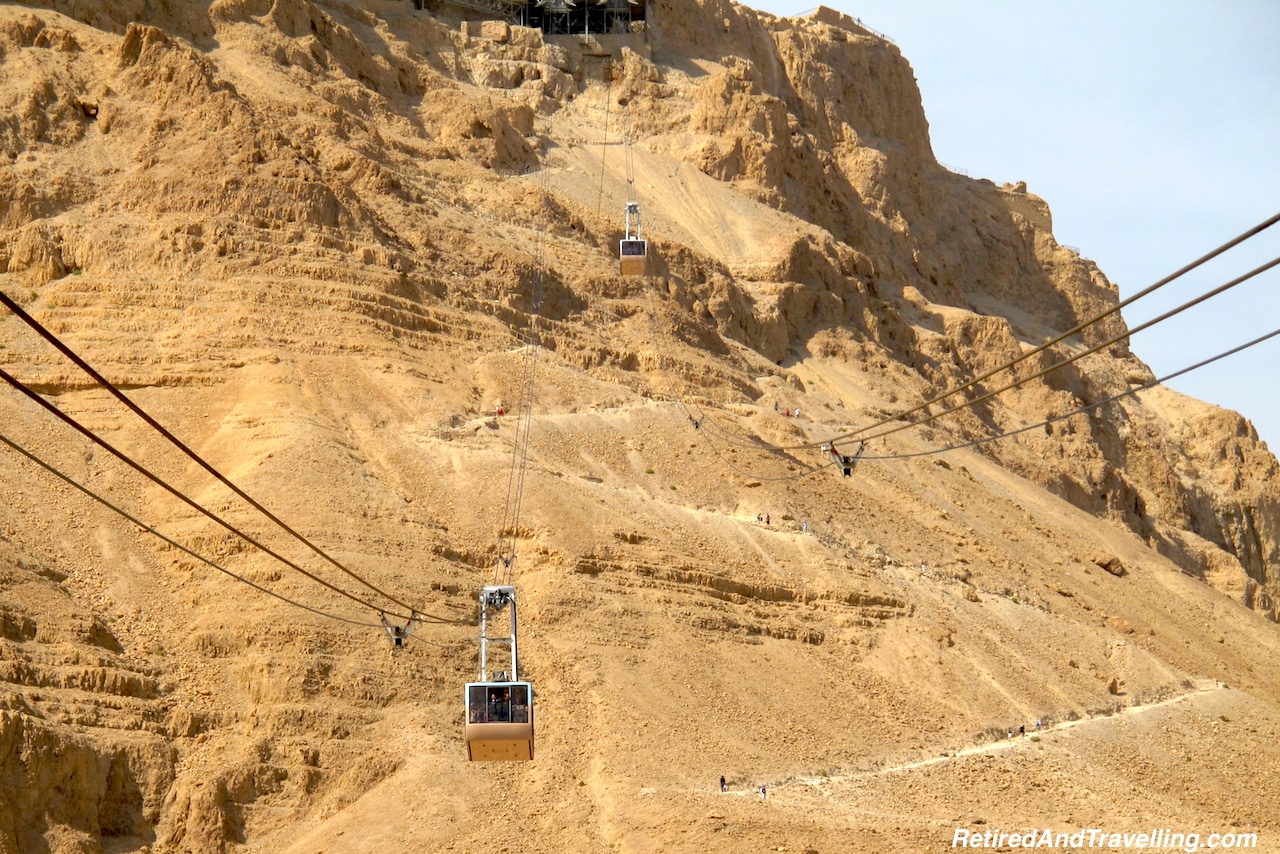 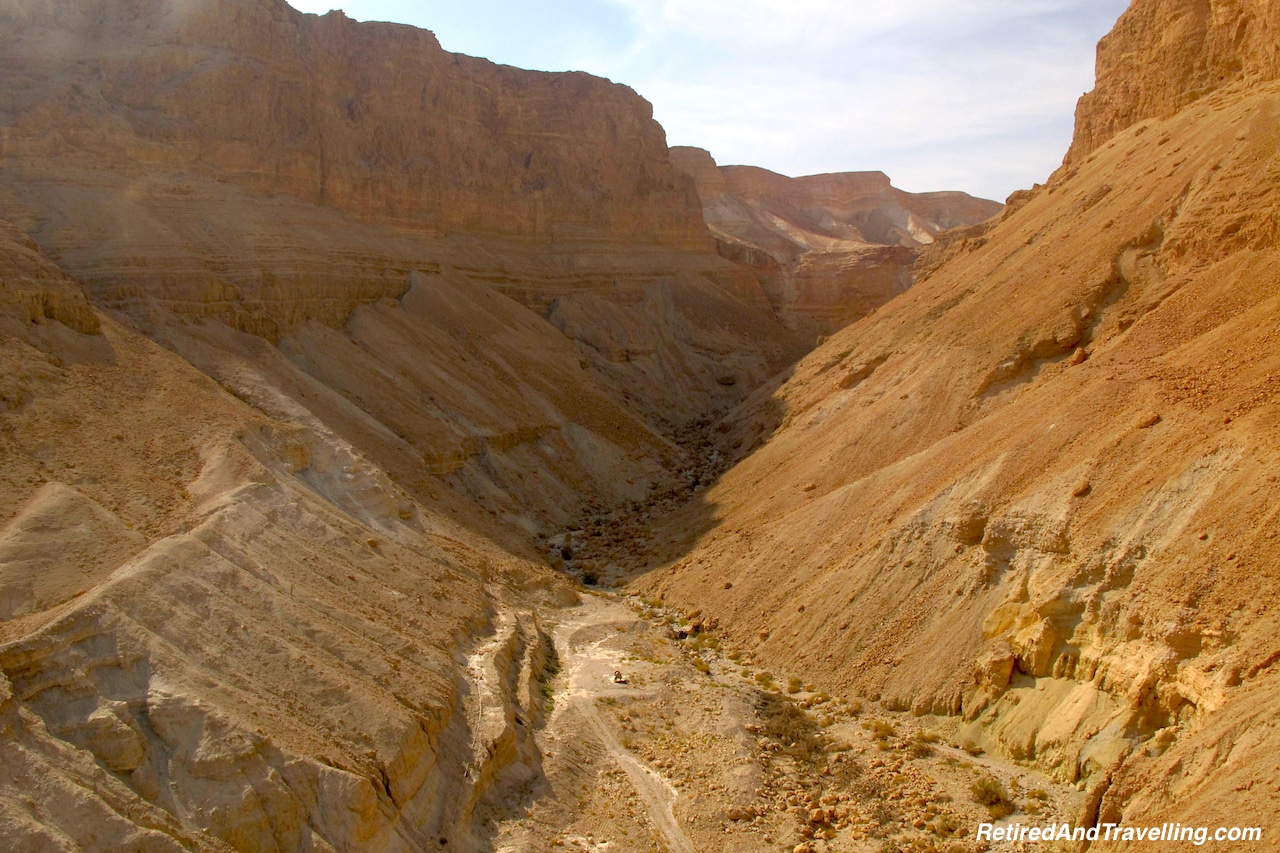 At the top there was a model that showed the original site. There were remnants of the site visible as we walked. In many places the walls had been rebuilt. You could see a black line on the walls below which was original rock. 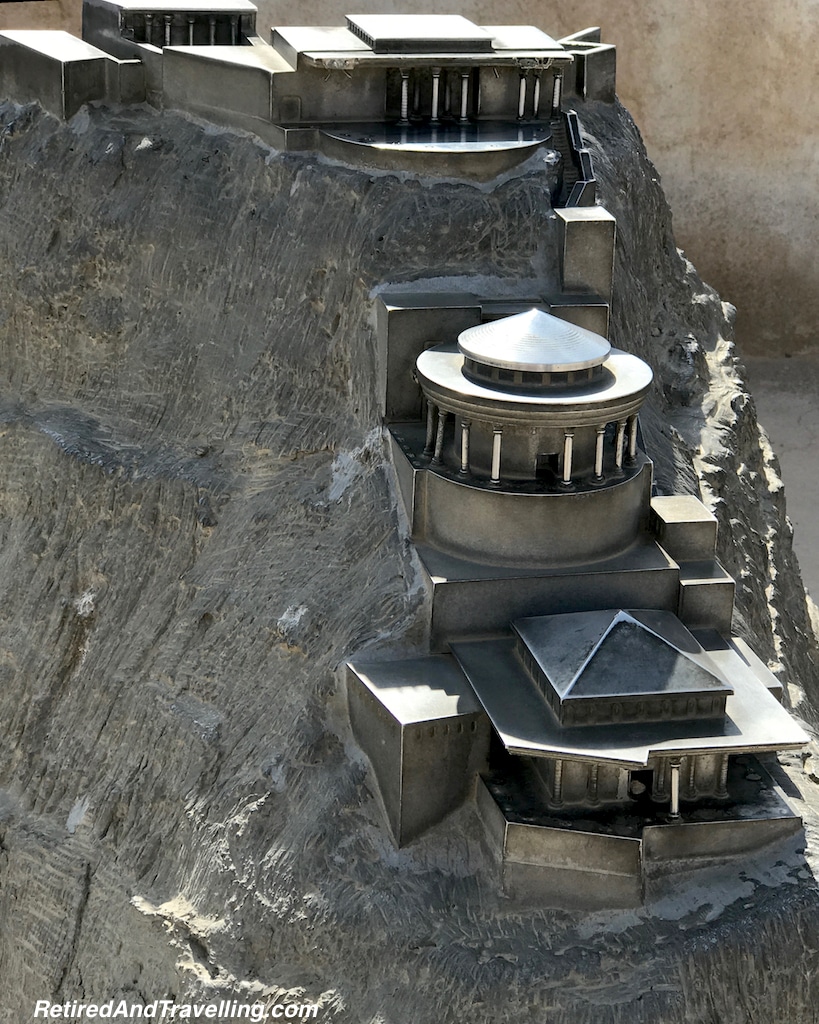 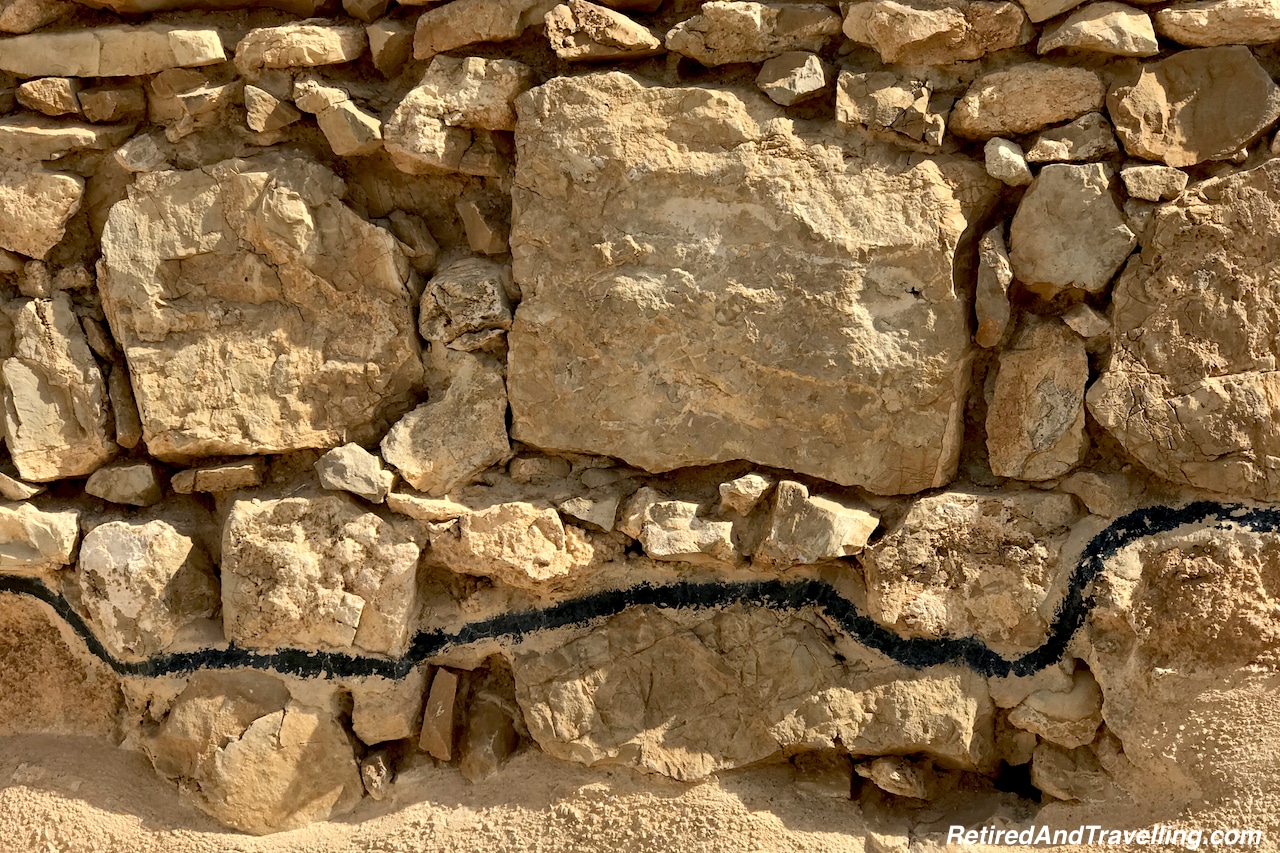 The Fortress at Masada

Our guide marched us quickly around the site. We could see remnants of the wall that surrounded the fortress, barracks and the palace. The storehouses and the cisterns filled by rainwater demonstrated the self-sufficiency of this fortress. It was easy to see how this fortress could withstand an assault. 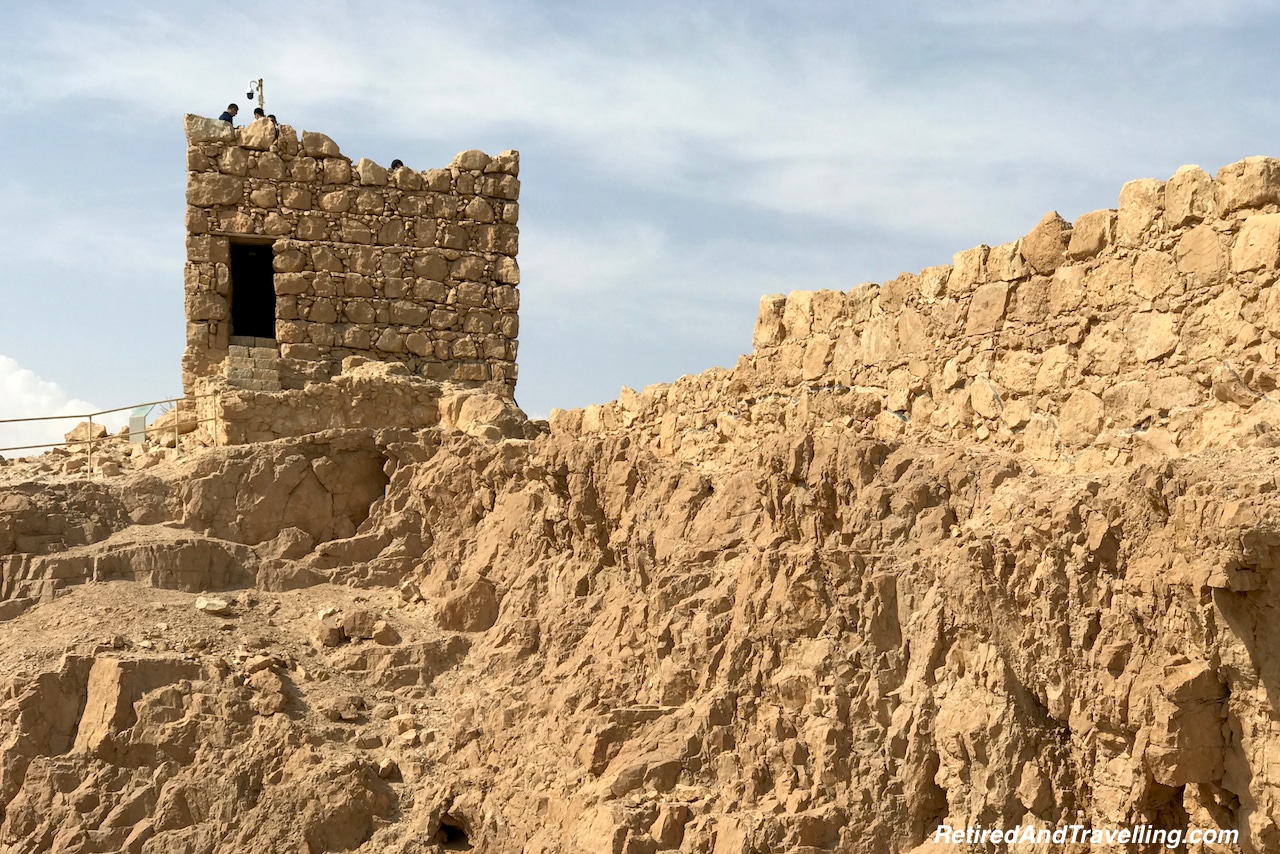 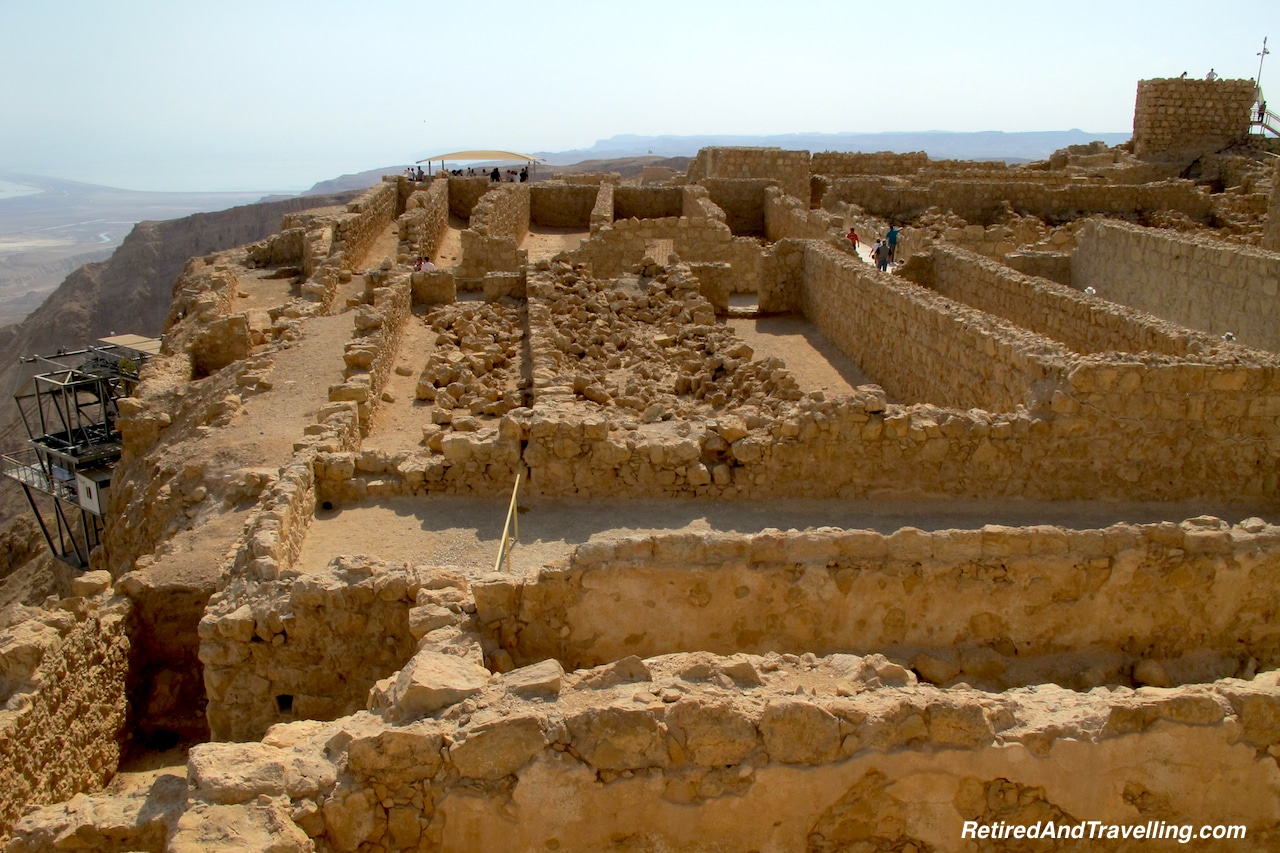 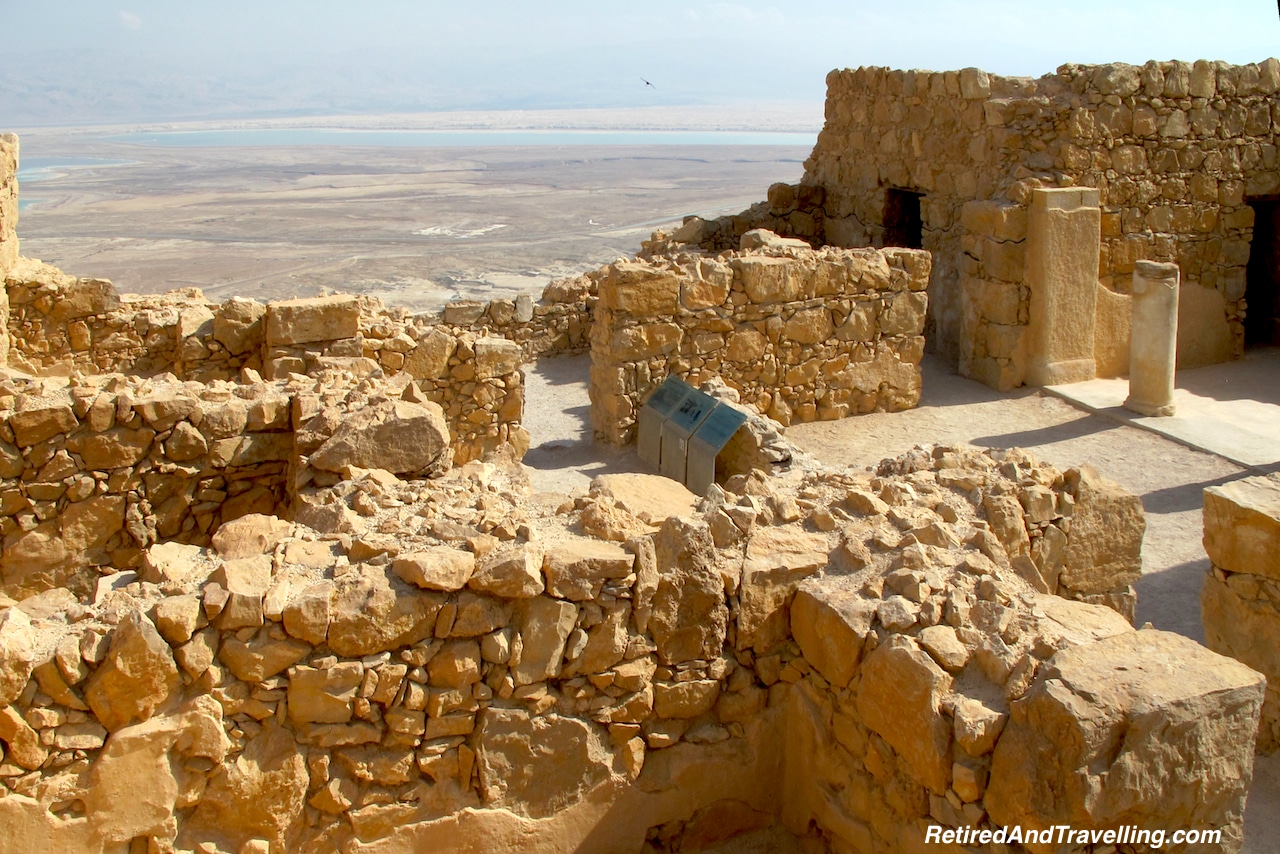 From the great height of Masada, we were able to get a panoramic view of the Dead Sea. 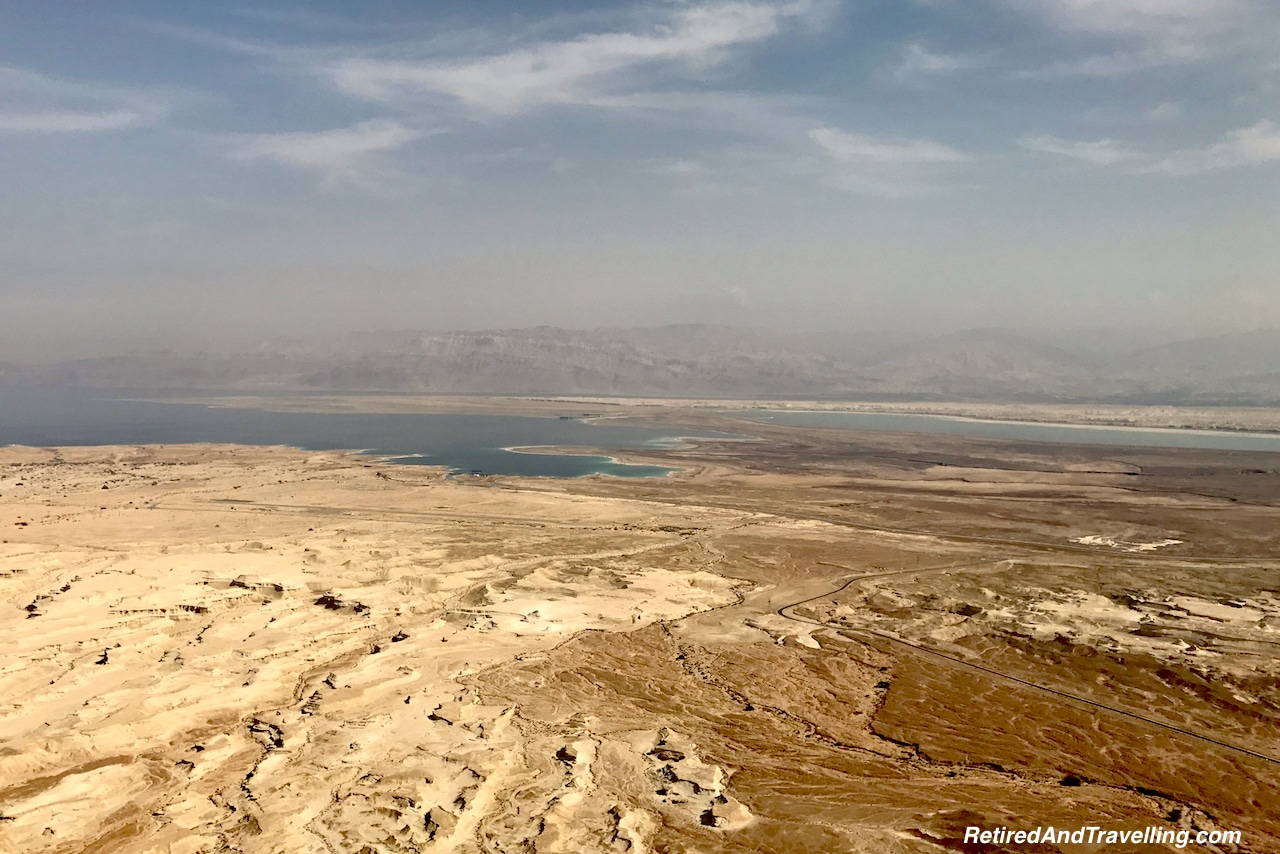 The History of Masada

This Roman fortress was taken by siege by the Jewish Sicarii rebels. The rebels stayed behind the wall of the fortress until years later the Romans attacked to re-take the site. You can still see the markings in the ground where the Roman camps located. Many means were used to re-take the fortress. Ultimately the Romans gained access to the fortress using a massive ramp and battering ram. The wooden walls were burned down. You can still see the remains of the ramp. 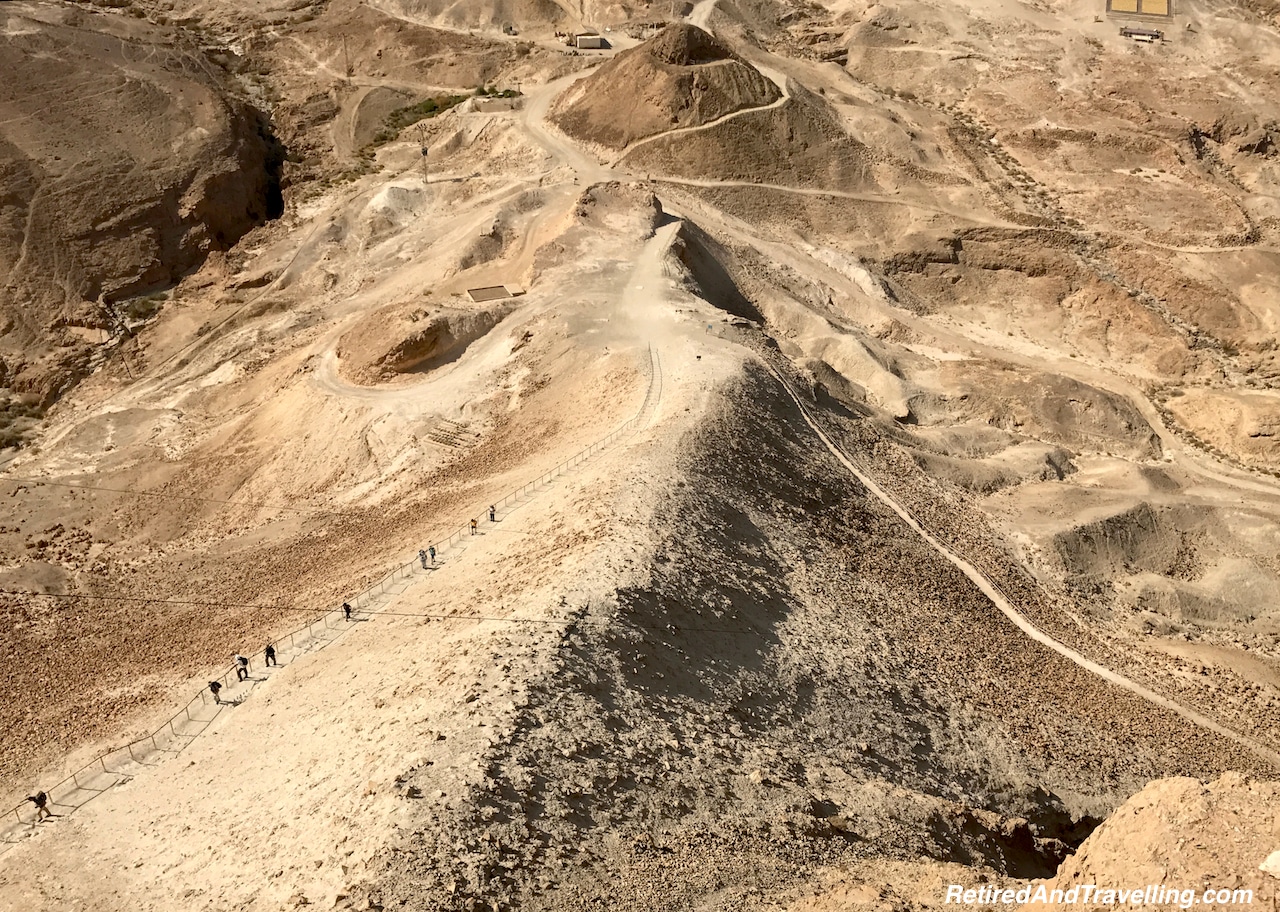 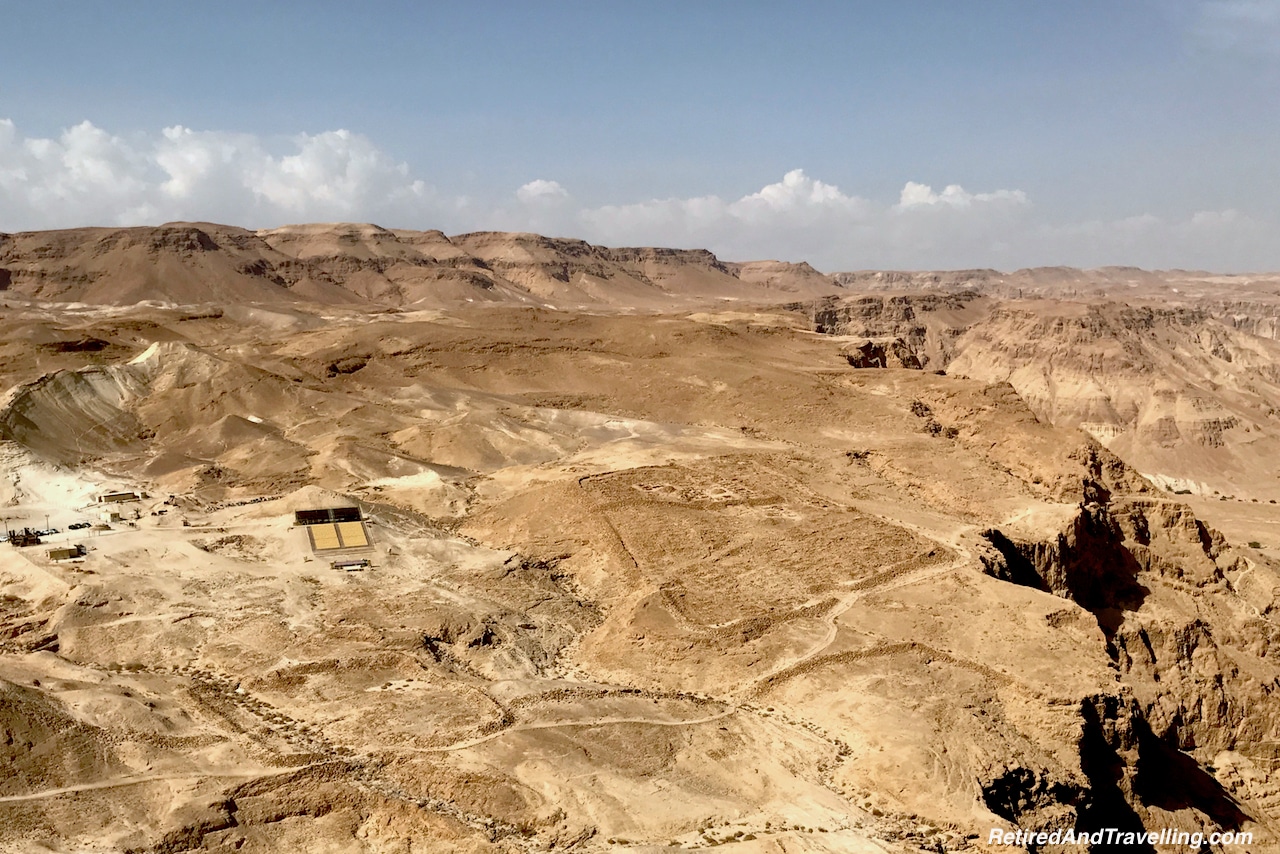 It became obvious that the Romans would take the fortress. The rebel leader made a compelling speech urging the community to take their own lives. He felt that it would be better to be dead than to live in humiliation as a Roman slave. Only two women and five children who had hidden were left when the Romans took Masada.

After returning to the ground level by cable car, we were off to the next stop on our Masada and Dead Sea tour.

The Dead Sea is the lowest point on earth, over 1,400 feet below sea level. When I had initially heard the term “Dead Sea”, I imagined it to be an old dried up sea. In fact, it was a very large body of water. It is the saltiest water in the world and since nothing can live in the sea, it is called the Dead Sea.

While not able to sustain life, the dead sea is the source of many minerals that are mined for their health benefits. We stopped in Qumran one of two kibbutzs with factories that process the Dead Sea minerals. The shop provided an impressive array of Dead Sea products for the shoppers on our tour. 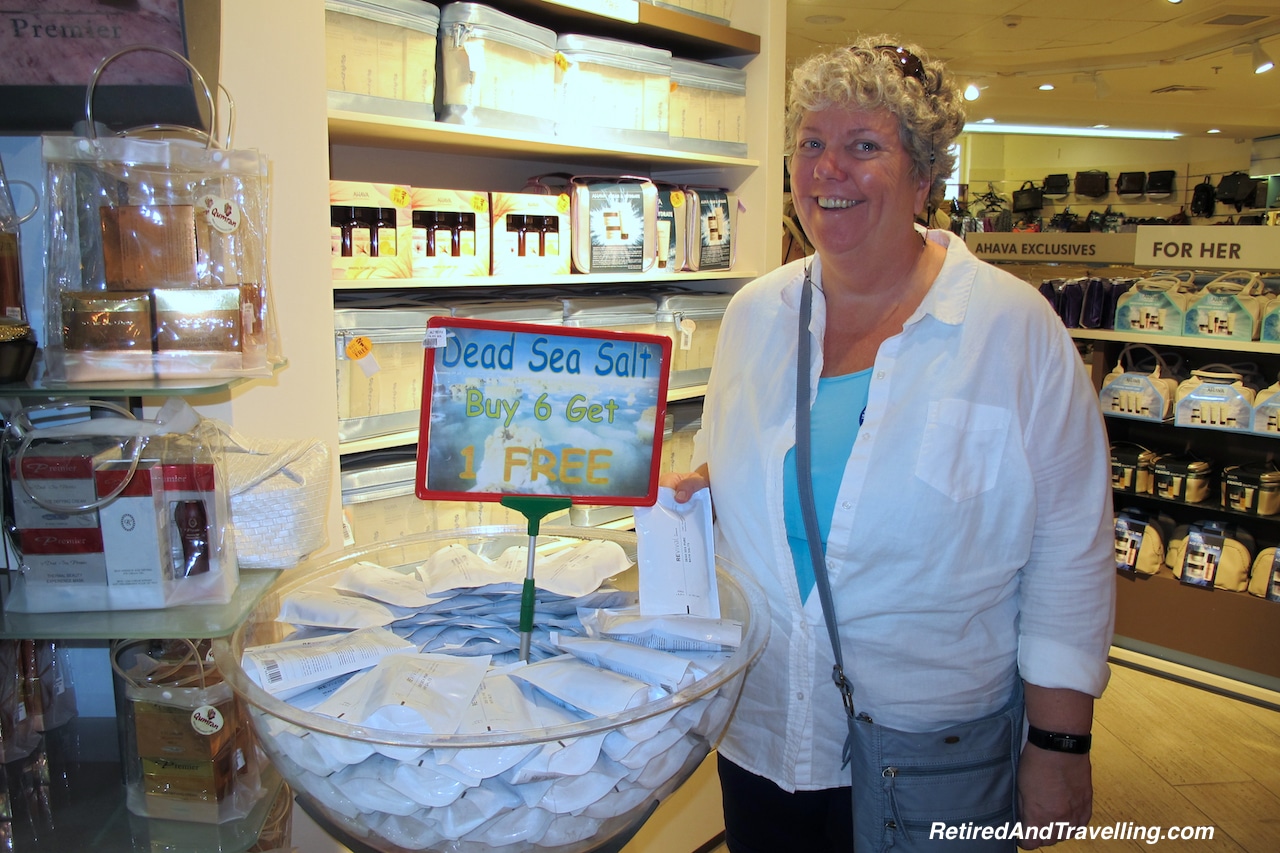 The final stop on our Masada and Dead Sea tour was at the Lot Hotel. This would be our lunch stop. We would have a couple of hours to relax and enjoy the Dead Sea. 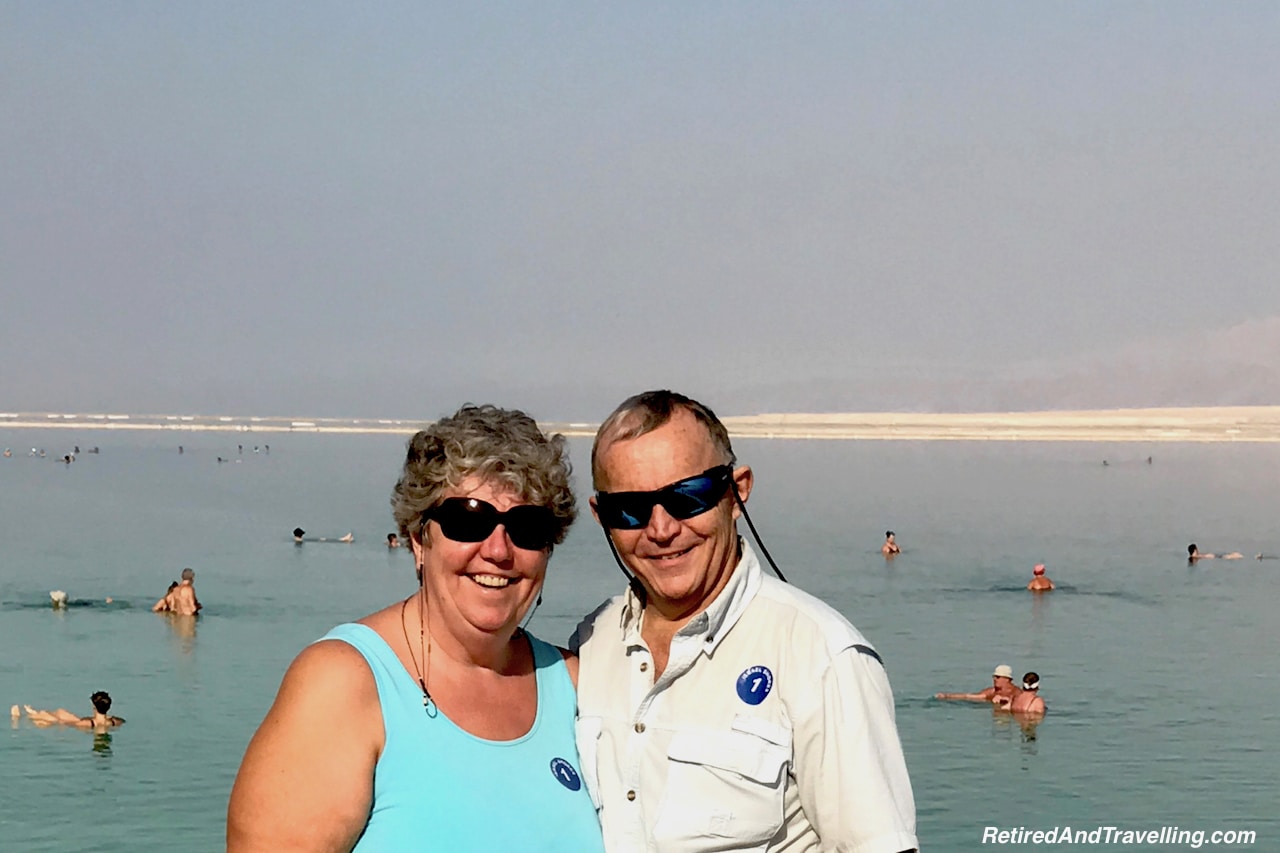 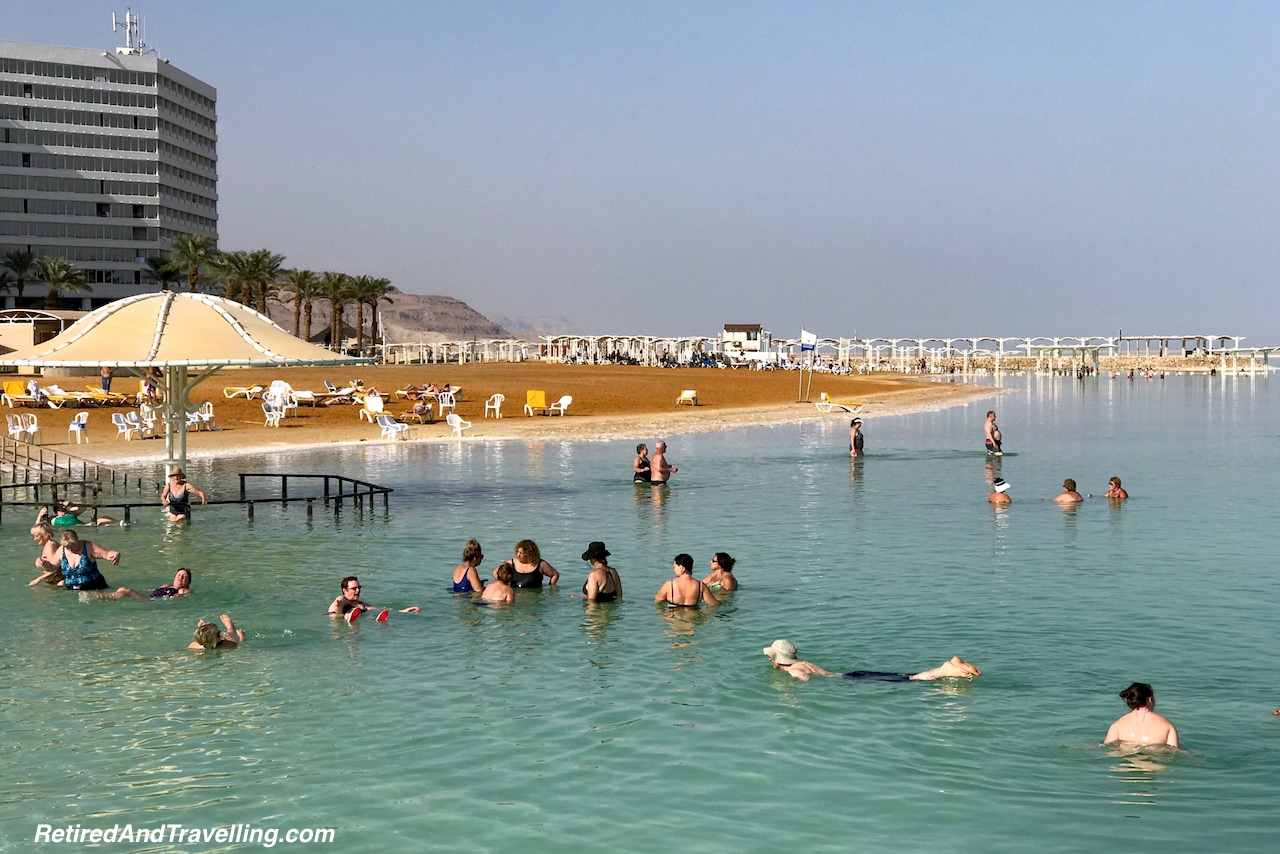 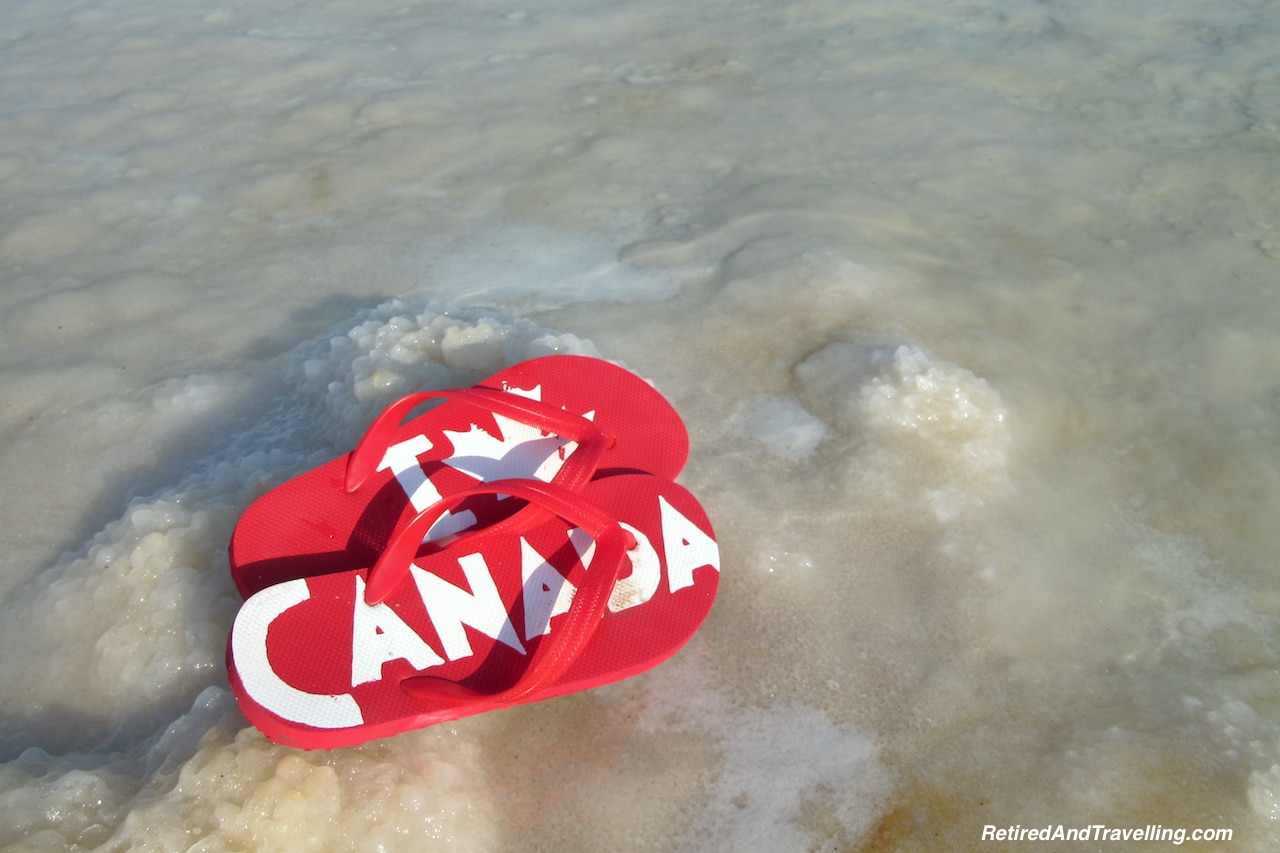 Bypassing the pool we set up on the beach. We could see people floating. The life guard warned people to float on their backs. We would understand why once we waded in.

I float pretty well but in the Dead Sea I felt like a cork. My body floated very high. If I lay back in the water, it was a major challenge to get my feet back underneath me. David assumed a relaxed lazy position. His legs typically sink like a rock but in the Dead Sea he was able to keep his legs at the surface. 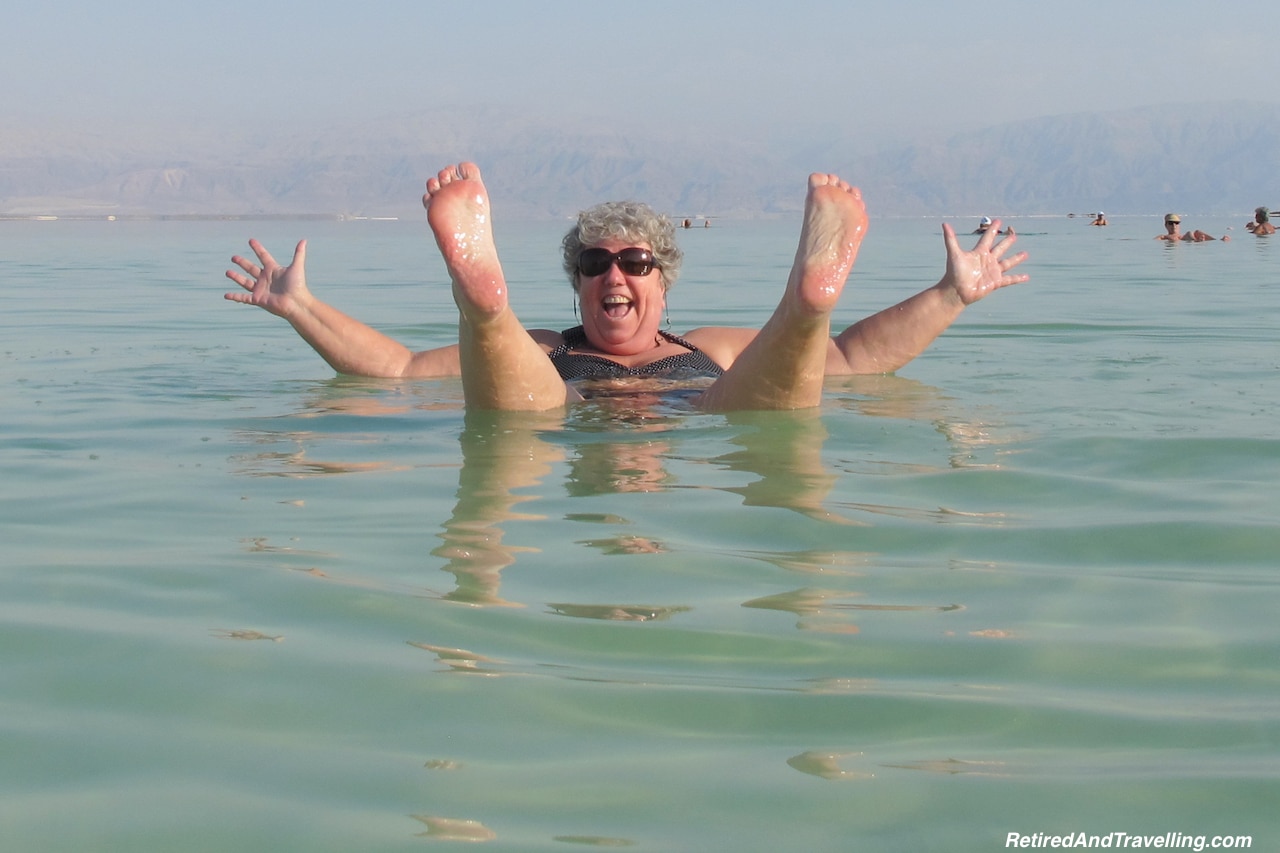 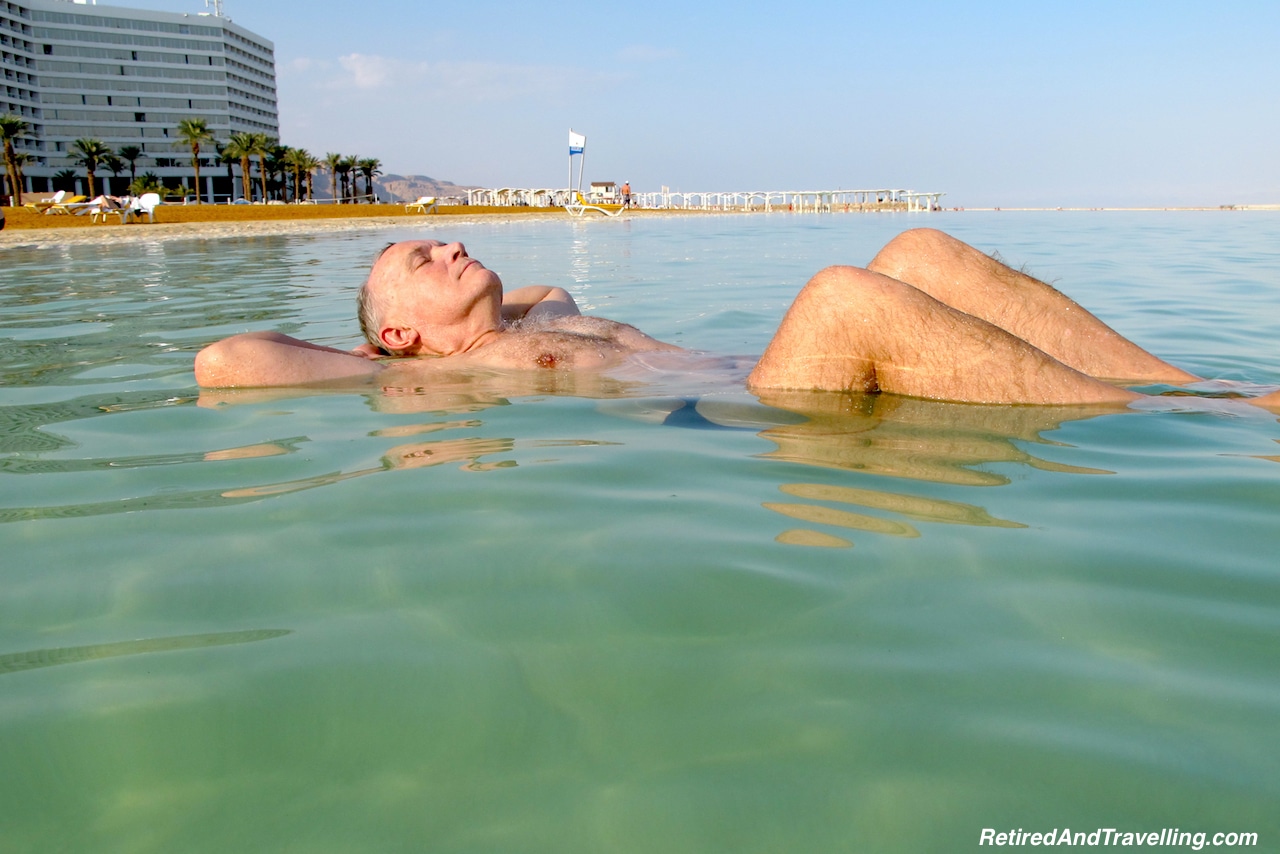 After we rinsed off, we stopped at the outdoor pool. This was such a difference from the Dead Sea with little extra buoyancy. The inside salt water pool must have been filled with Dead Sea water as our extra buoyancy returned. Even if the Dead Sea minerals are good for you, we made sure to rinse well when we were done with the salt water.

It was a quiet group heading back to Haifa from our Masada and Dead Sea tour. The tour guide had lazed in the Dead Sea during our stop and needed a nap once he got back on board. We hoped that our tour guides for other shore excursions were a bit more engaged.

Traffic stopped to a standstill on our way home. We immediately worried that there was some kind of checkpoint issue. It turned out that it was just gawkers who couldn’t resist slowing down for a car on the side of the road. After a very long day, we all just wanted to be back on the ship.

It was an interesting day spent on the Masada and Dead Sea tour. I am not sure I would ever need to return to that part of Israel again. Maybe I need to research the Dead Sea minerals. I may have missed out on my beauty rejuvenation! Our next day in Jerusalem would give us a very different glimpse of Israel.

Have you done a Masada and Dead Sea tour? Did you like swimming in the Dead Sea? Did I miss a major beauty opportunity by passing on the Dead Sea products?