On our cruise through the Nordic countries, we were excited to get a small taste test of Ireland from north to south. We started in Londonderry, Northern Ireland with a stop at the the Giant’s Causeway. Fact and fiction kept us entertained as we travelled through this iconic spot.

A Little About The Giant’s Causeway

The Giant’s Causeway was an area of 40,000 interlocking basalt columns that formed stepping stones into the sea. While most of the columns had a characteristic hexagonal shape, different rocks had four to eight sides. The site was declared a World Heritage Site by UNESCO in 1986. 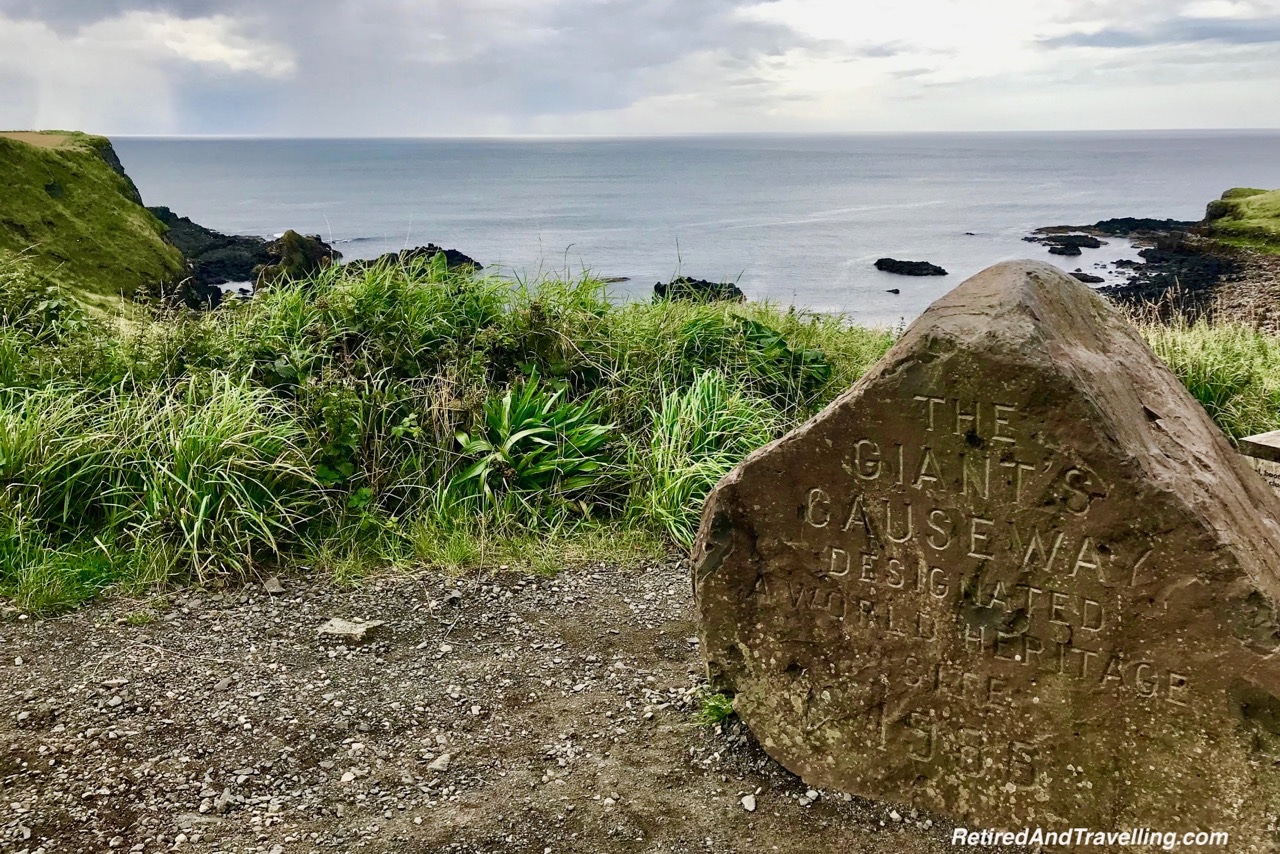 There was a fanciful story about the creation of the Giant’s Causeway. In this tale, it was built to help the giant Finn MacCool get to Scotland to meet the Scottish giant Benandonner. There are even identical basalt columns at Fingal’s Cave on the Scottish isle of Staffa.

The more scientific story started 50 to 60 million years ago during the Paleocene Epoch. Very fluid molten lava came up and formed a plateau that was convex on the bottom and concave on the top. As the mass cooled, it fractured and produced the distinctive columns of the Giant’s Causeway. Much of this geological feature is now above ground. Although it extends out under the sea.

Regardless of which story we believed, a stop at the Giant’s Causeway was a truly remarkable day trip.

Our tour bus parked and we had 2 hours to explore the Giant’s Causeway. We grabbed our audio guides and took the shuttle from the Visitor Centre to the waterfront. From our first viewpoint, we got a great panoramic view right out to the red path that went up the hill. The shore of this large Port Ganny Bay was filled with rough volcanic rocks. 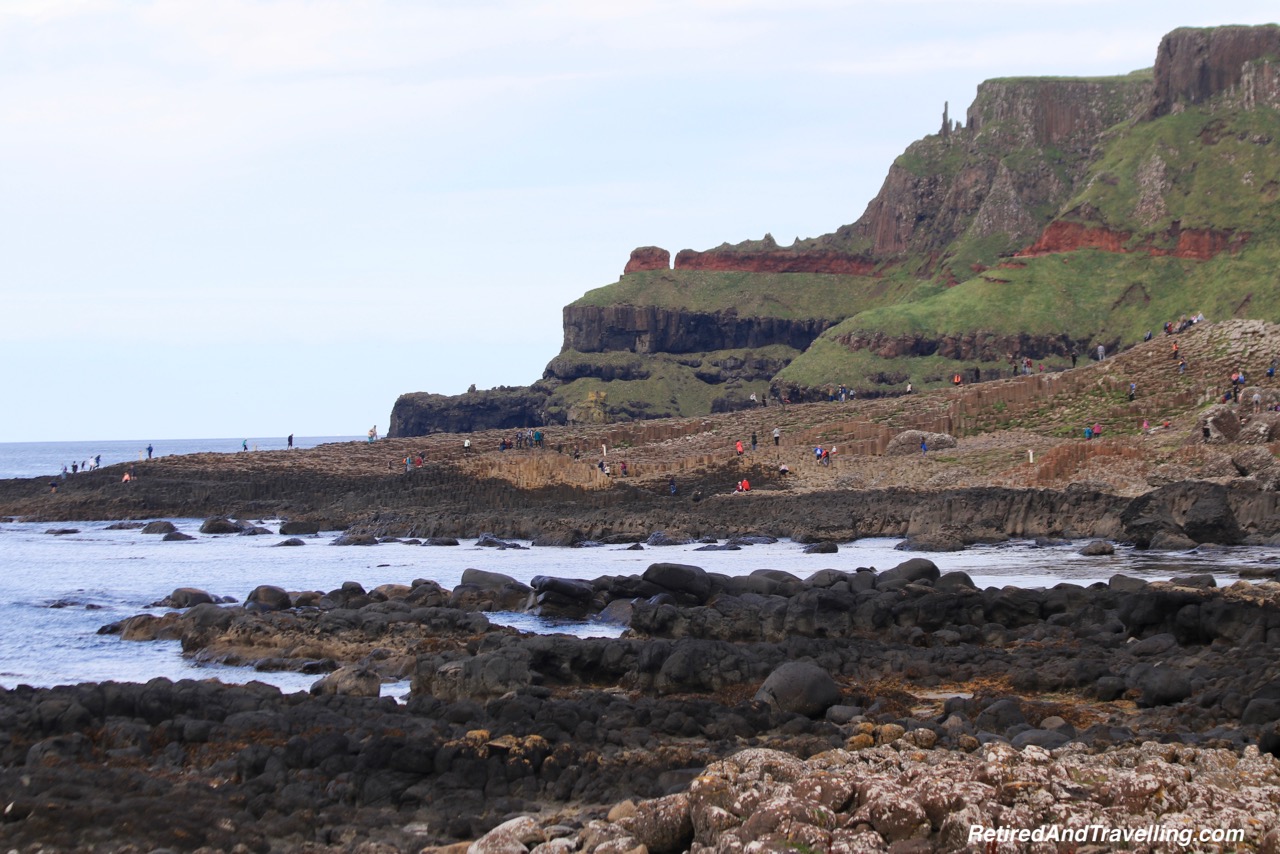 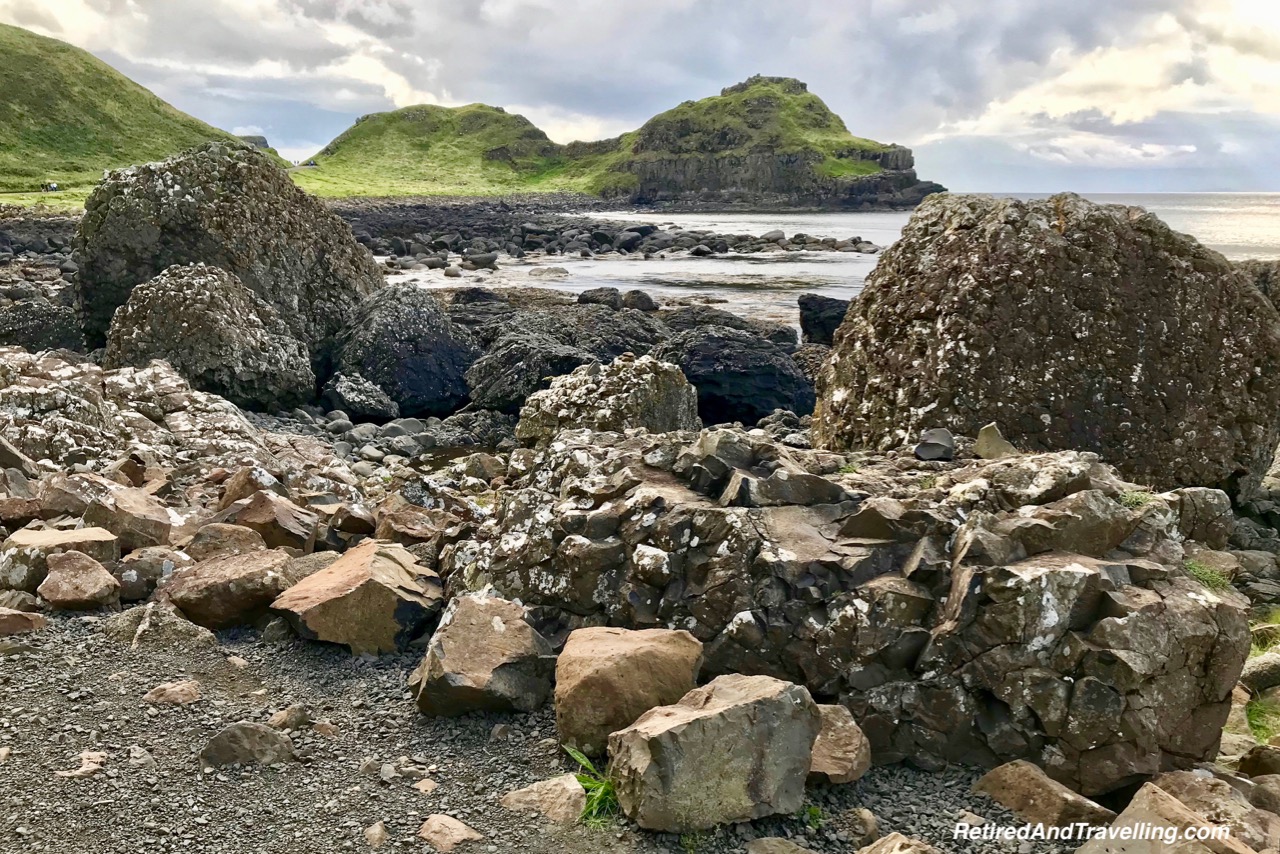 There was a large field with the top of stone pillars at ground level. They looked like stepping stones out to sea. When we looked close, we saw the different shapes of the pillars. Some of the tops were polished and were a bit dangerous to walk on in wet weather. But most were still very rough rock. Much like what we found when we visited Stonehenge, I imagined a day when this national treasure was roped off to stop people from climbing on the rocks. Both to protect the rock and the tourists. 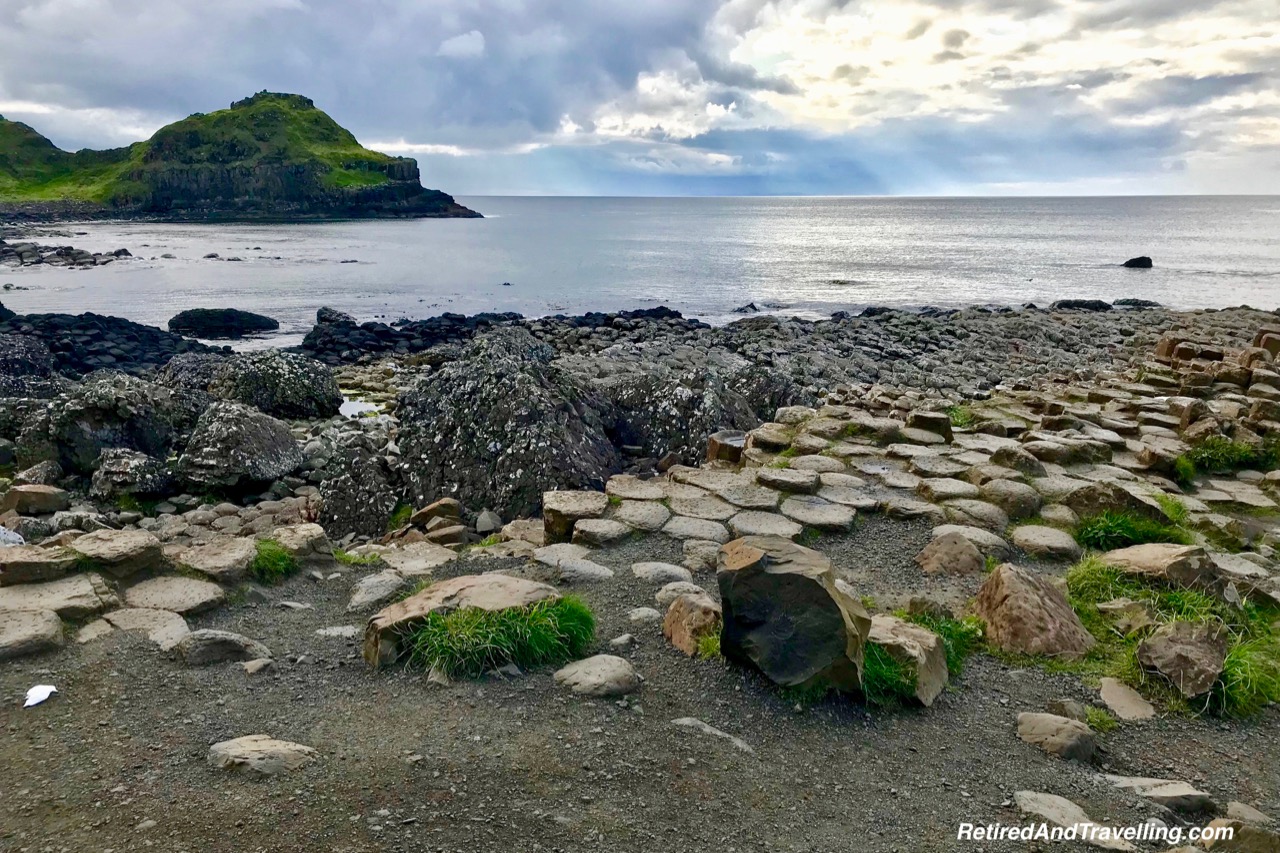 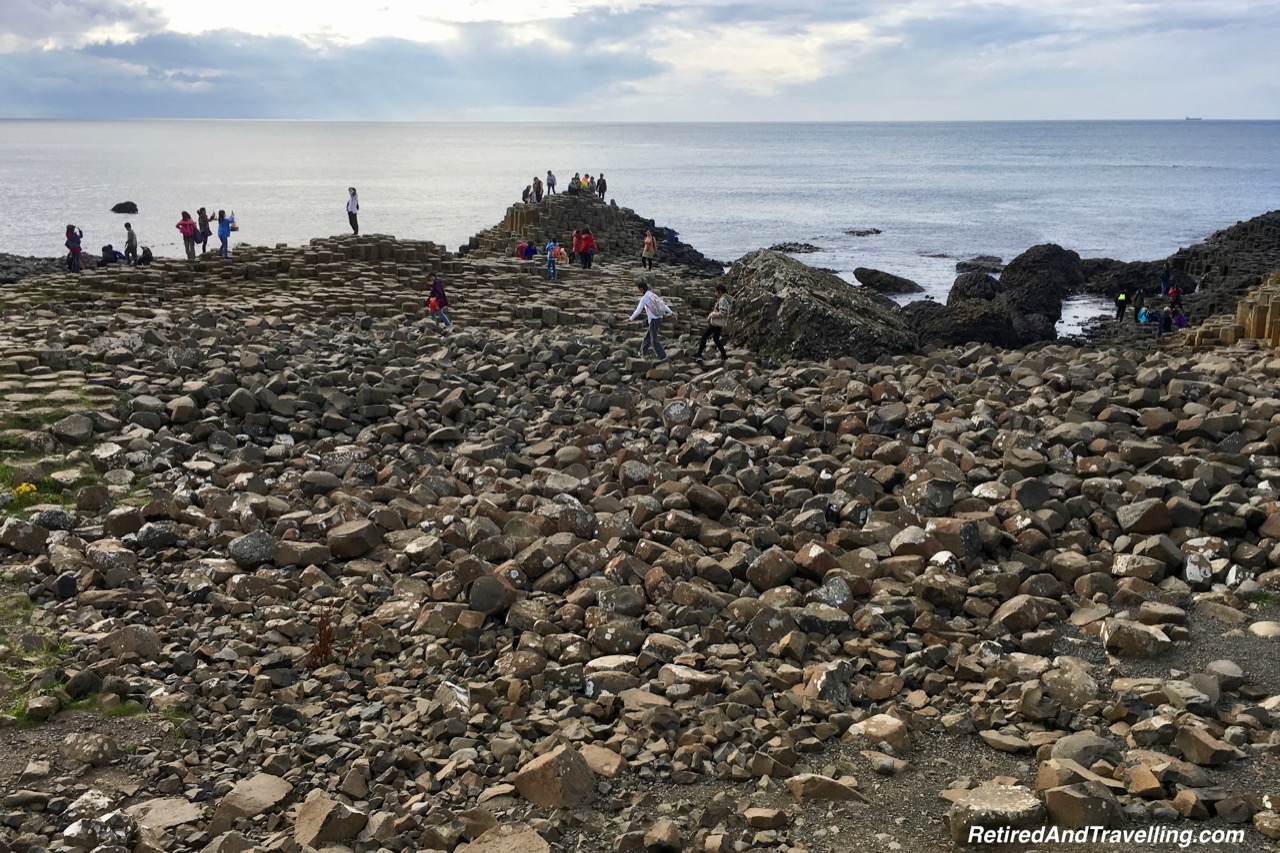 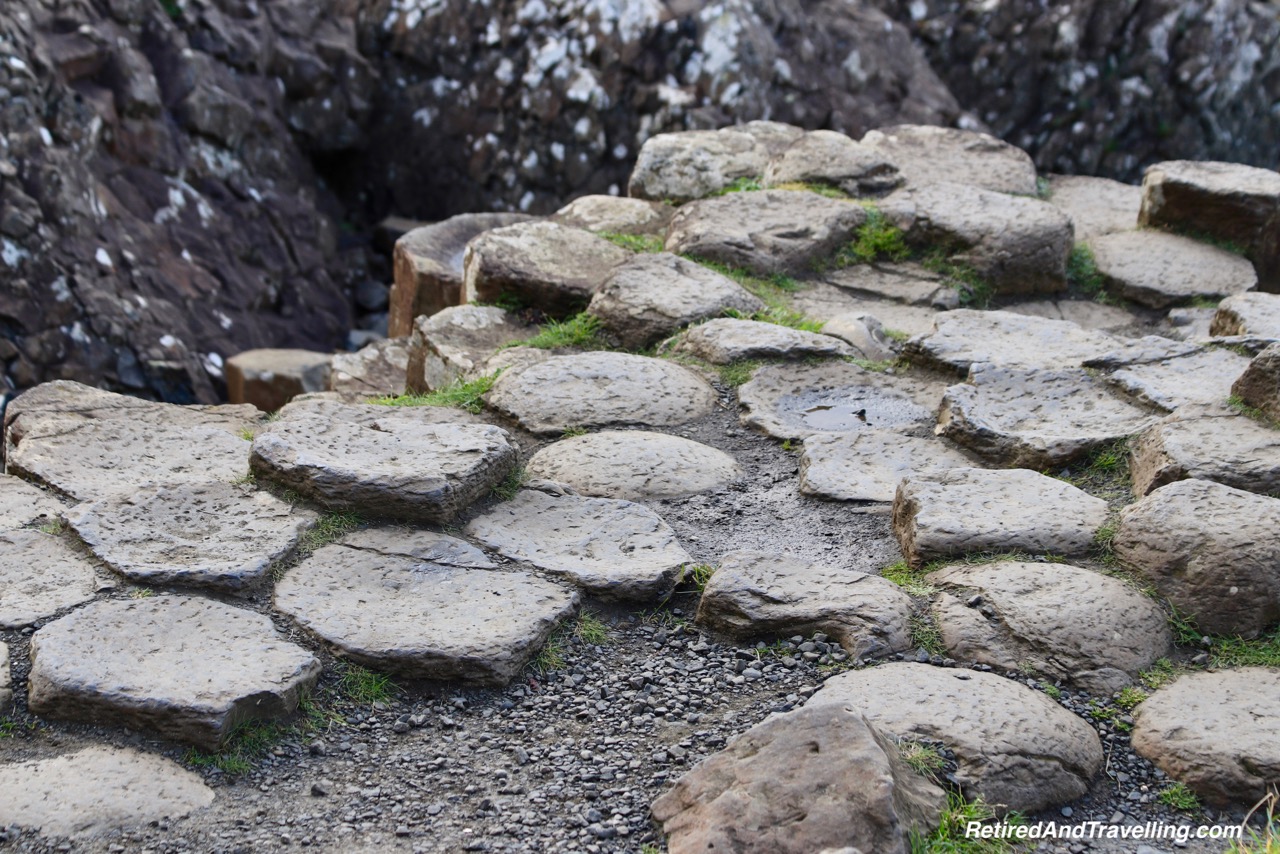 Other pillars jutted up and formed a climbing platform. As we walked on through what looked like a gateway, giant pillars now towered above our heads. People climbed the pillars to get a view out over the site. When we walked back from this wall of pillars, we got a more dramatic view. 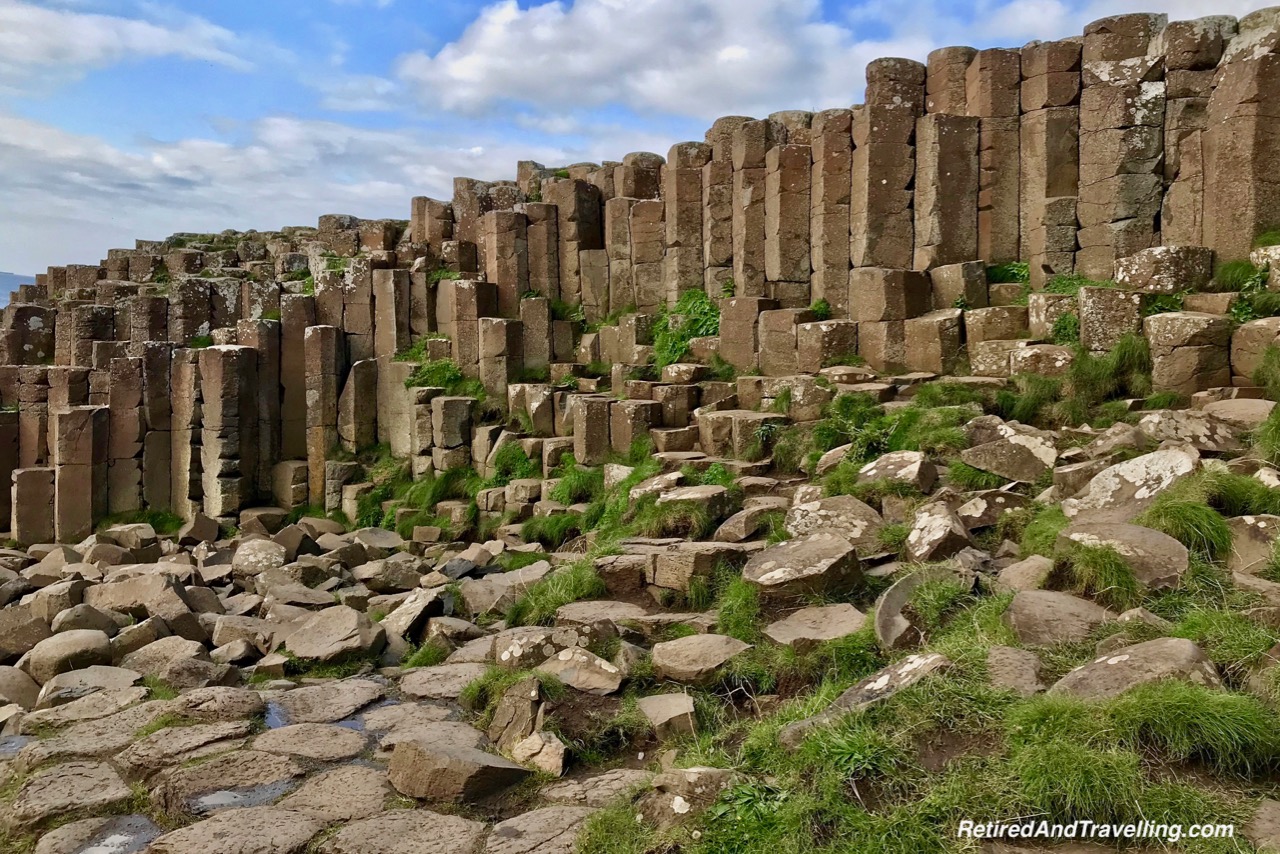 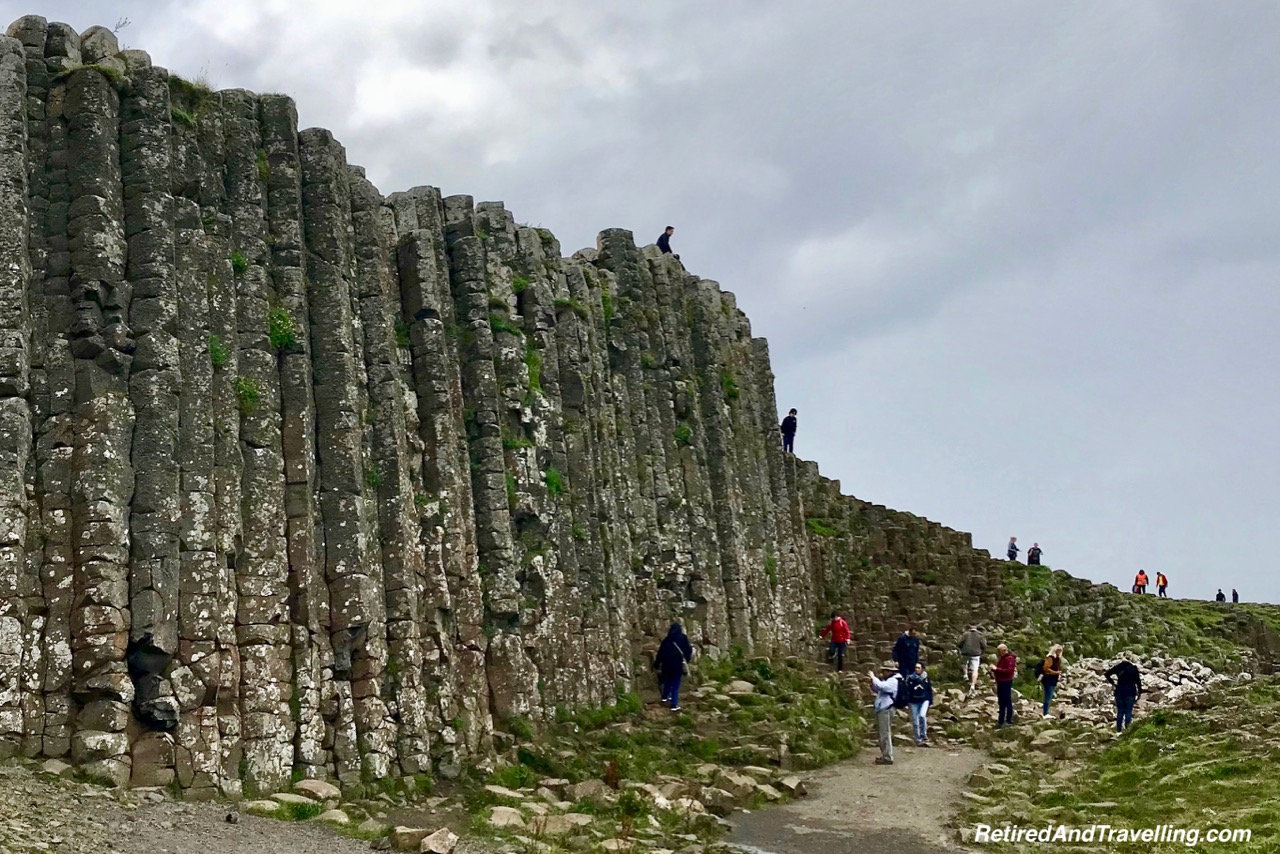 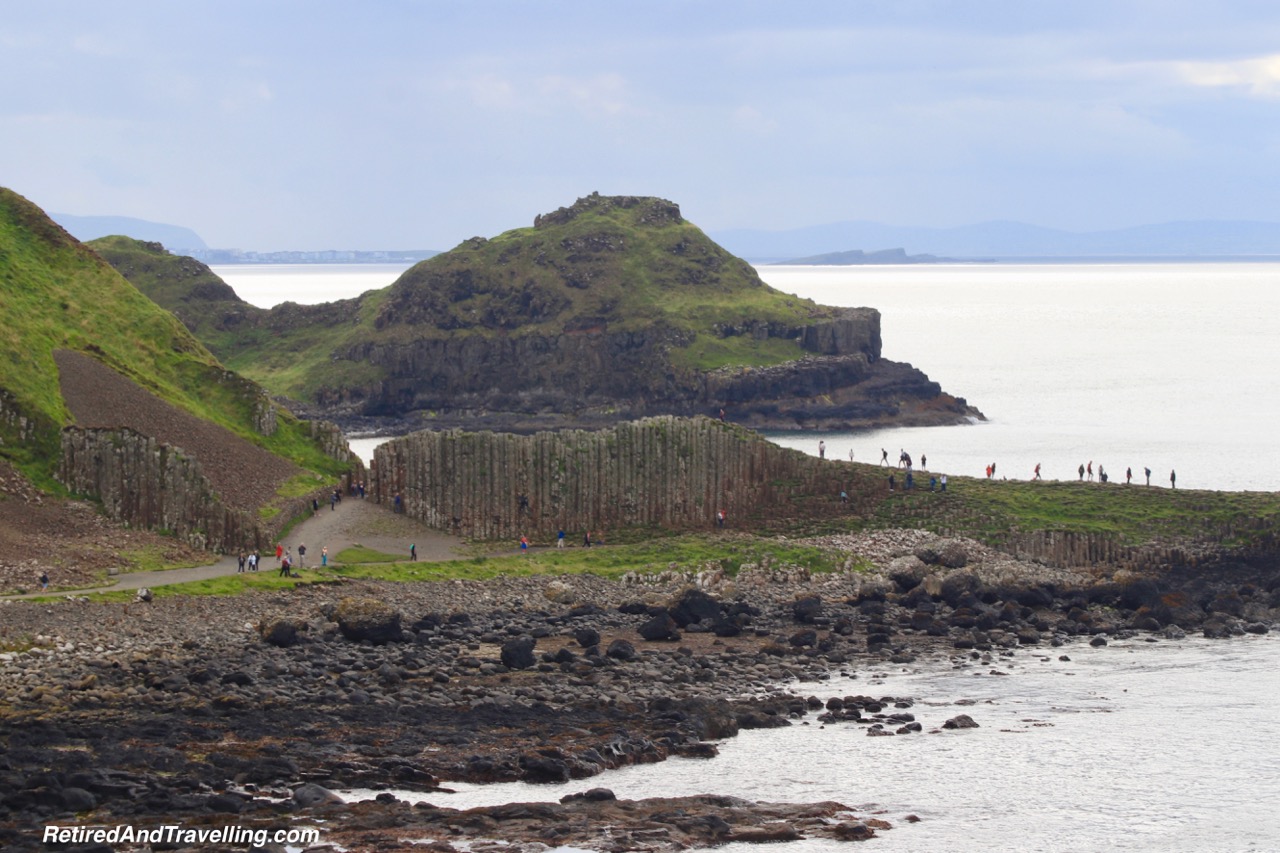 That first view on our stop at the the Giant’s Causeway was simply stunning.

Climbing High Up The Hill

On the other side of the stones was the Port Noffer Bay. We saw the red walking path up high on the hill. Of course we had to walk up the hill to the point to see what was around the corner As we walked we listened to the audio guide at each stopping point. 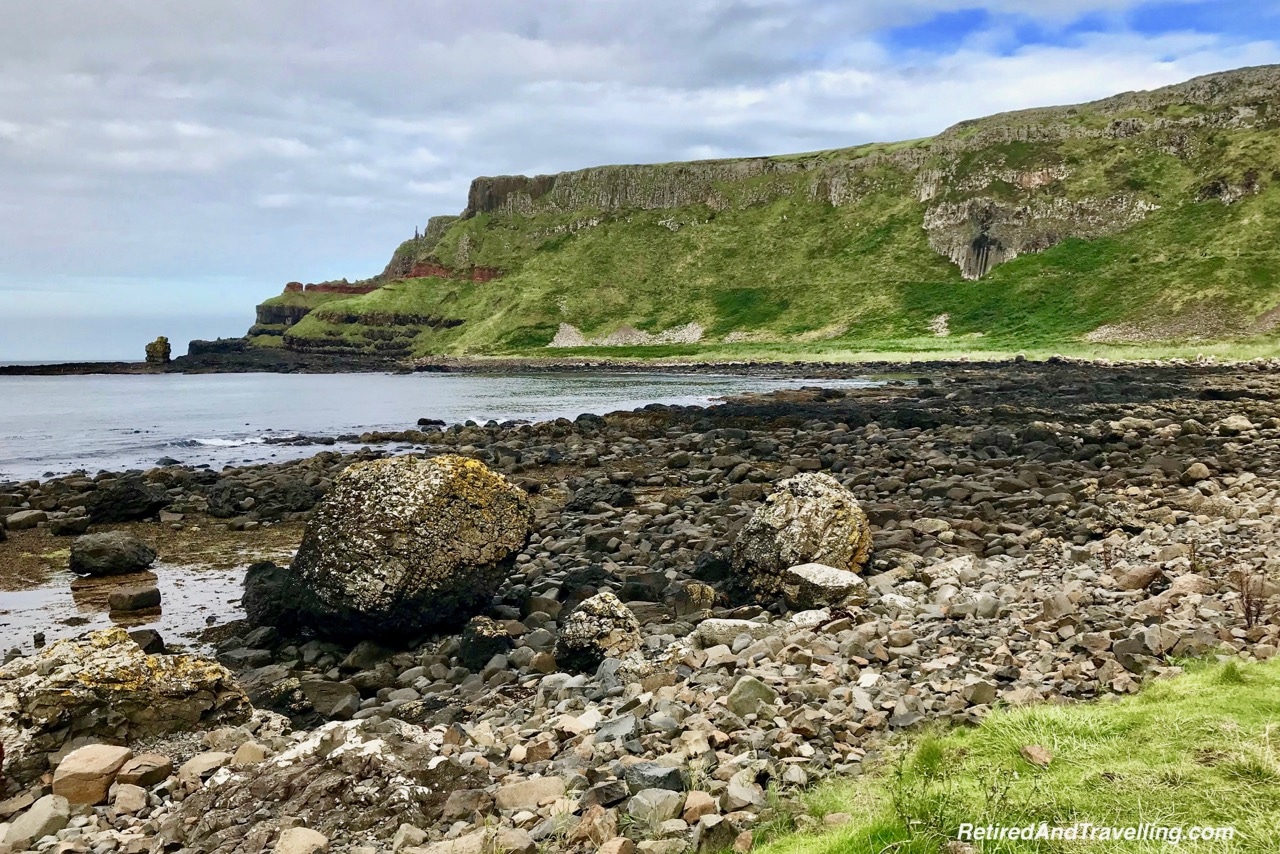 The path up the red cliffs was steep and slippery. But it was navigable when we moved slowly. We stopped at a fascinating rock outcropping that looked like a pipe organ built into the hills. A little further on we found the fascinating curved pipes. 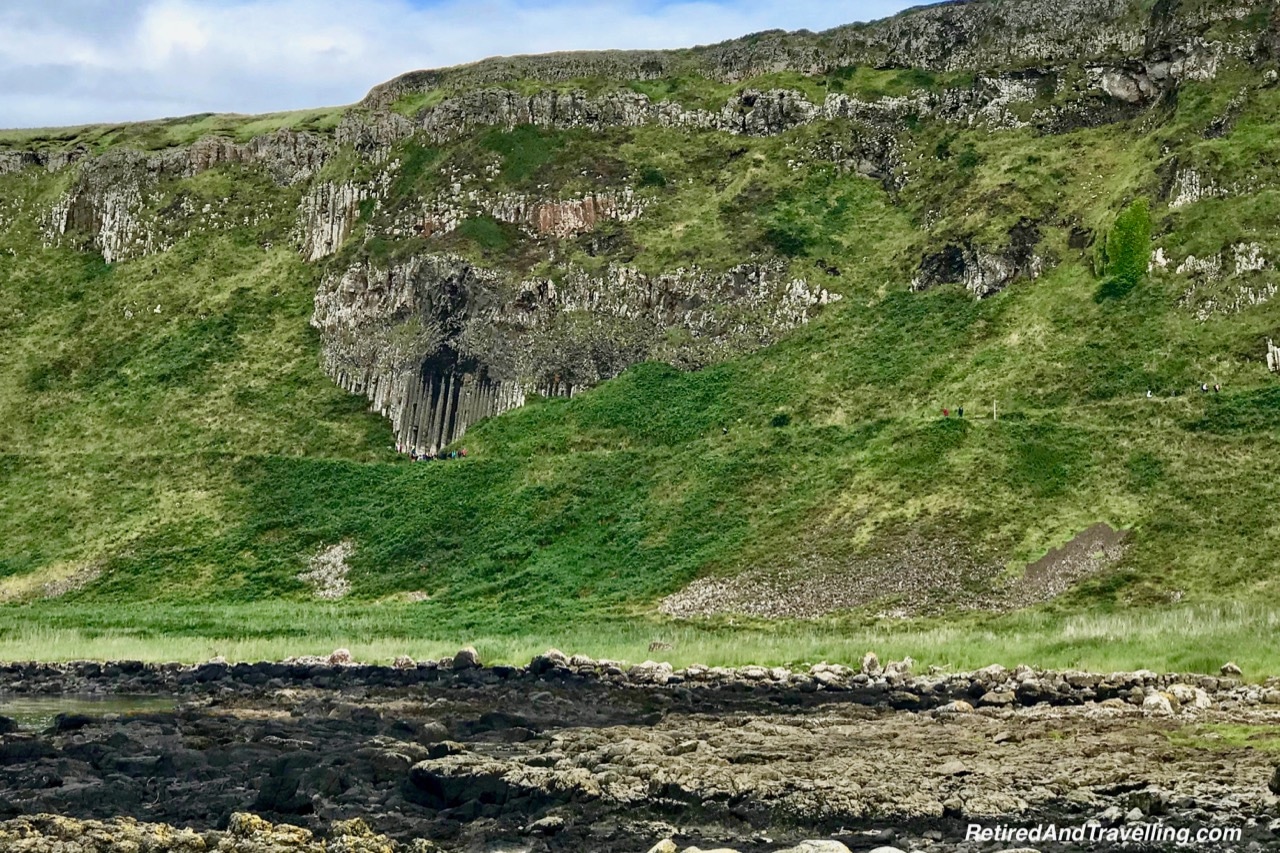 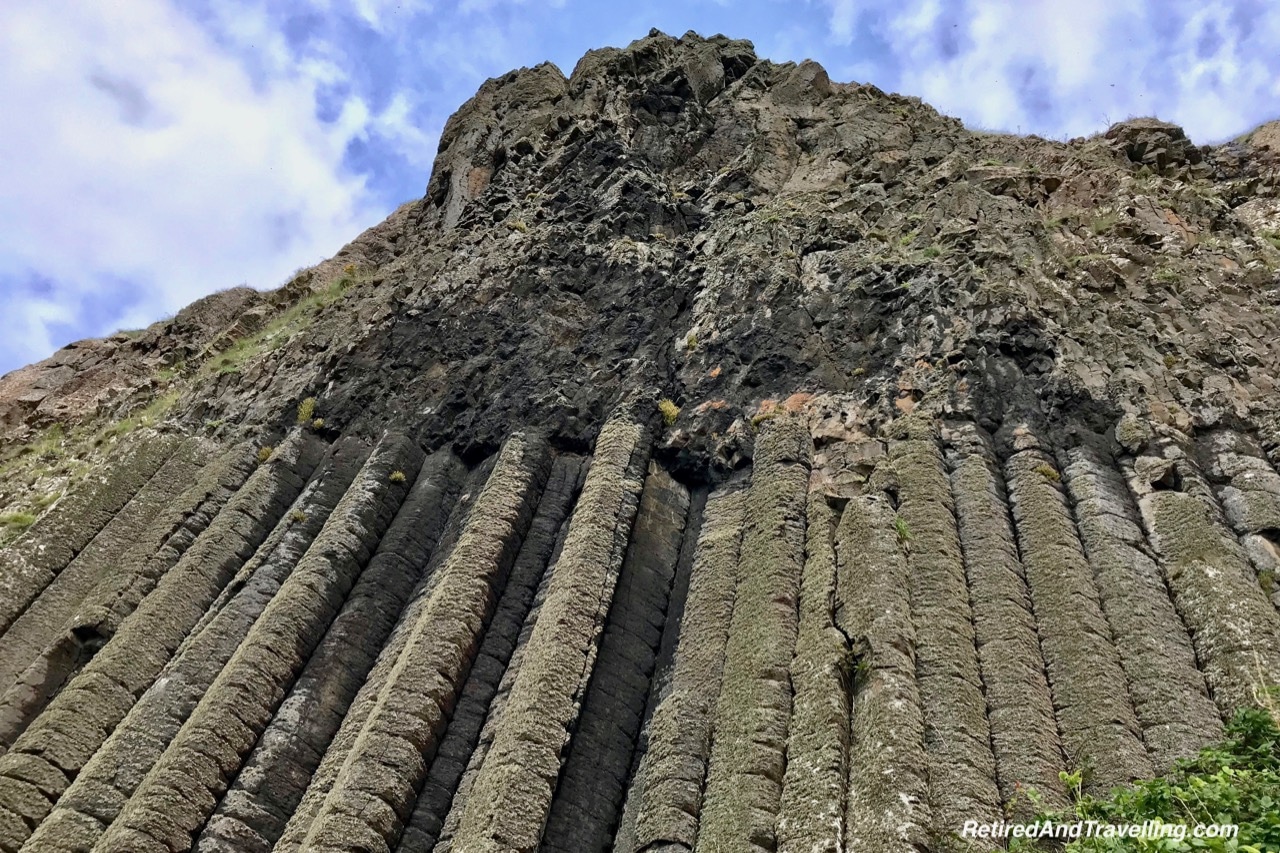 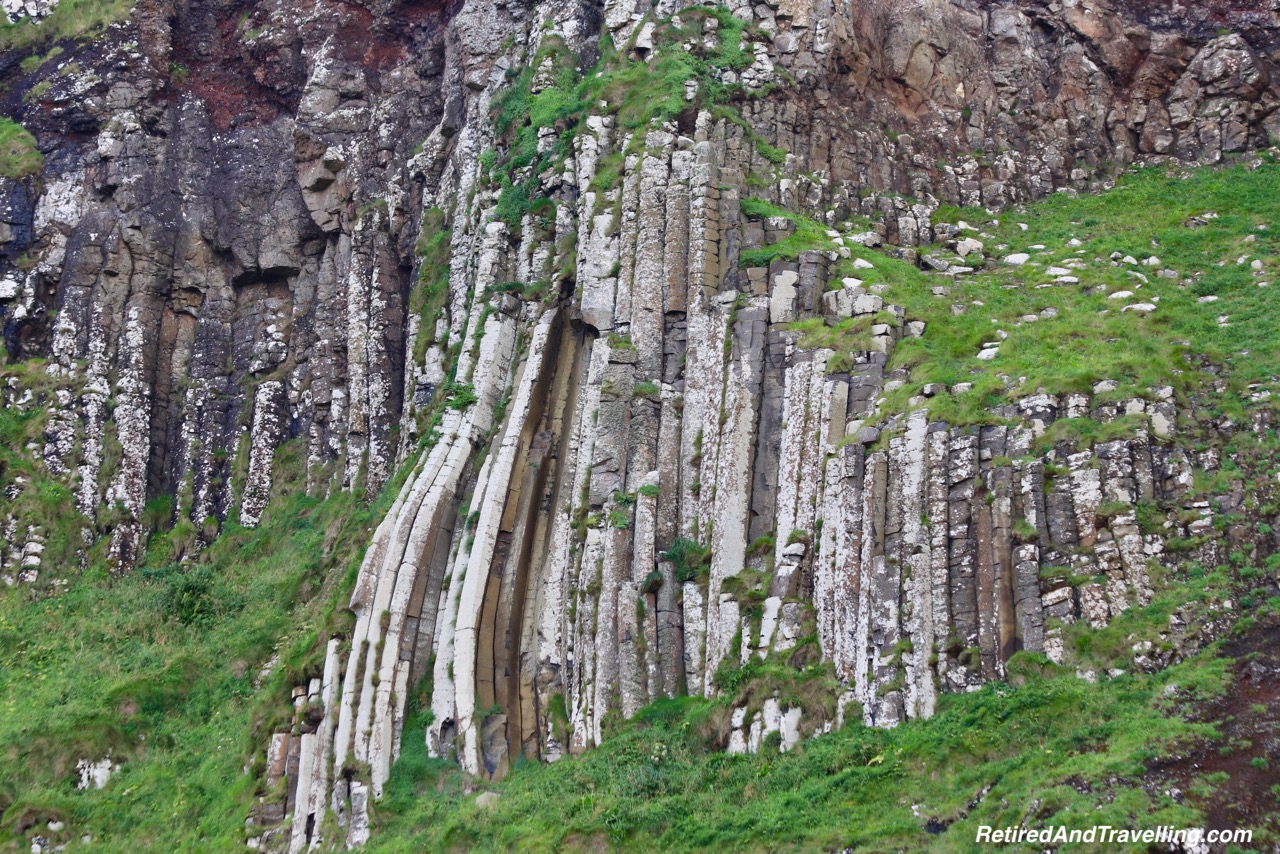 As we walked up and down the hill, we got great views out to the water. The rocks towered over us. And as we reached the corner, the iron in the ground turned the rocks and soil red. It was definitely worth the effort to hike up. 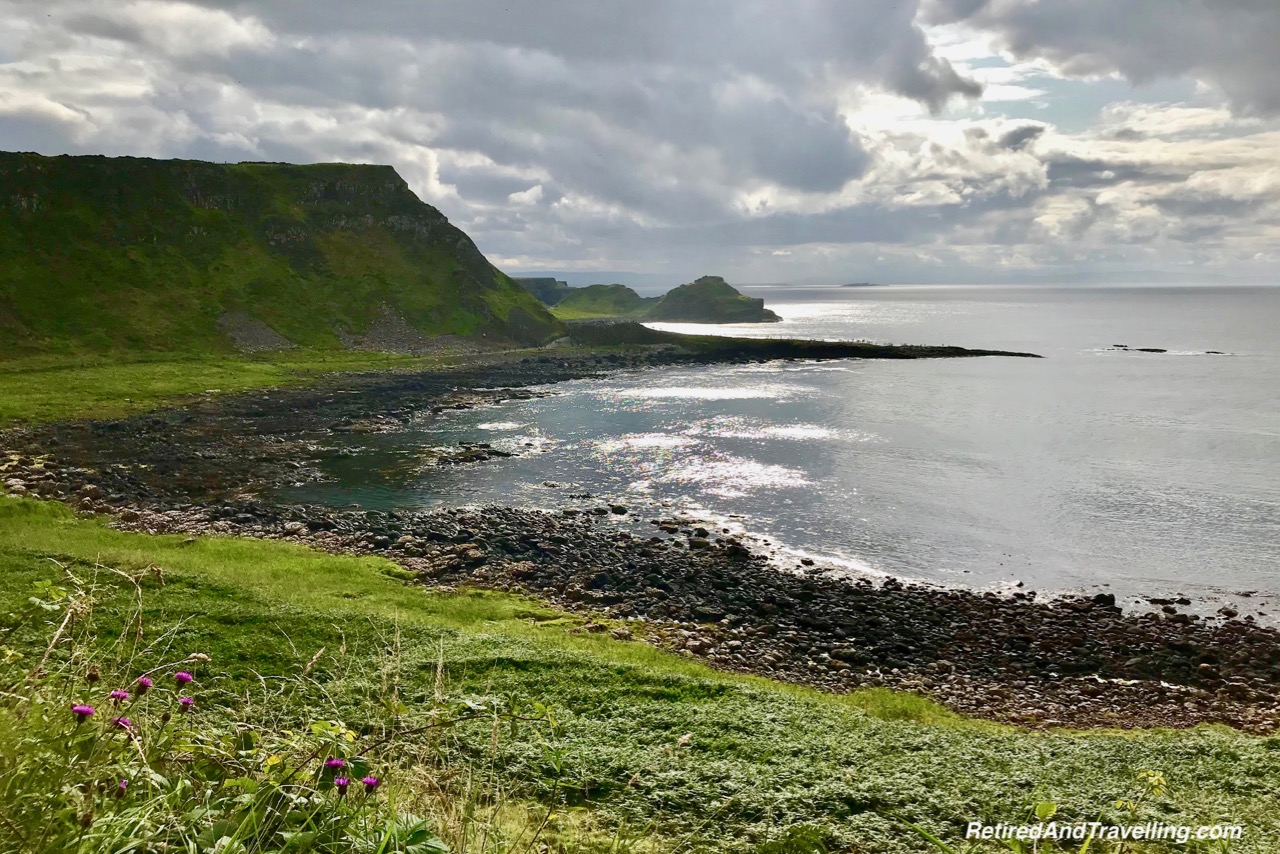 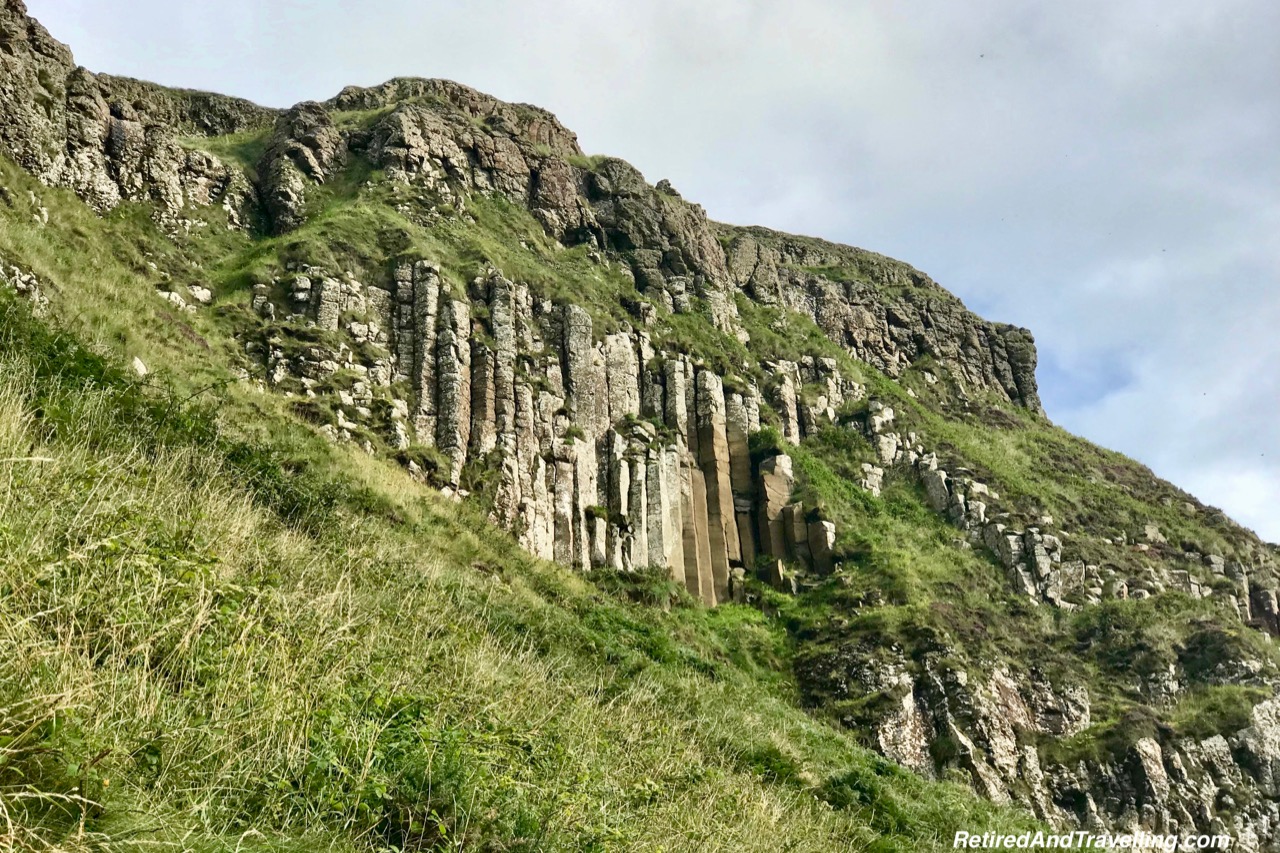 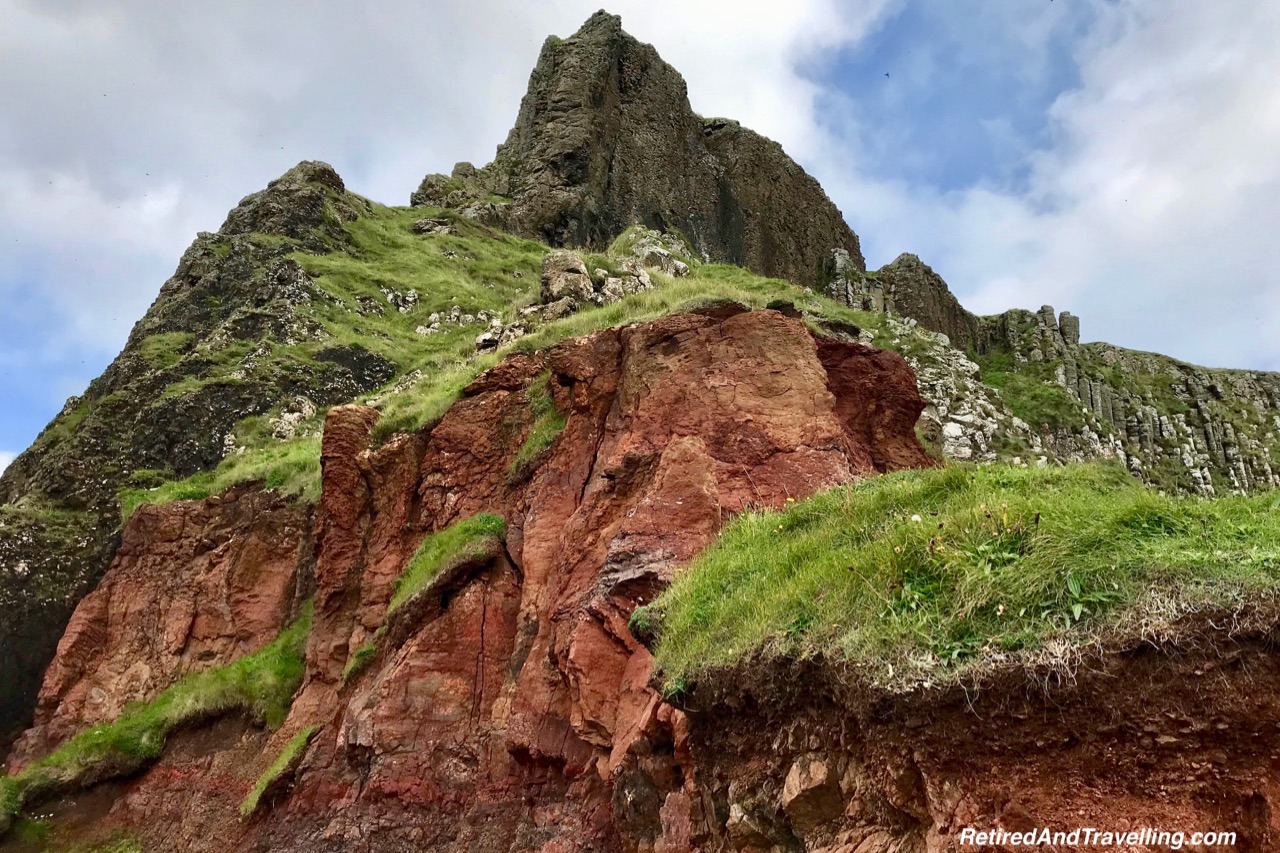 Checking Out The View Around The Corner

When we finally hit the high point, we were delighted with the view around the corner to the Amphitheatre bay. The gate was closed at this point so we went no further. Parts of the path were regularly closed off when the cliff was deemed to be unsafe. A slope stability map provided a view of what shape various parts of the paths were in. 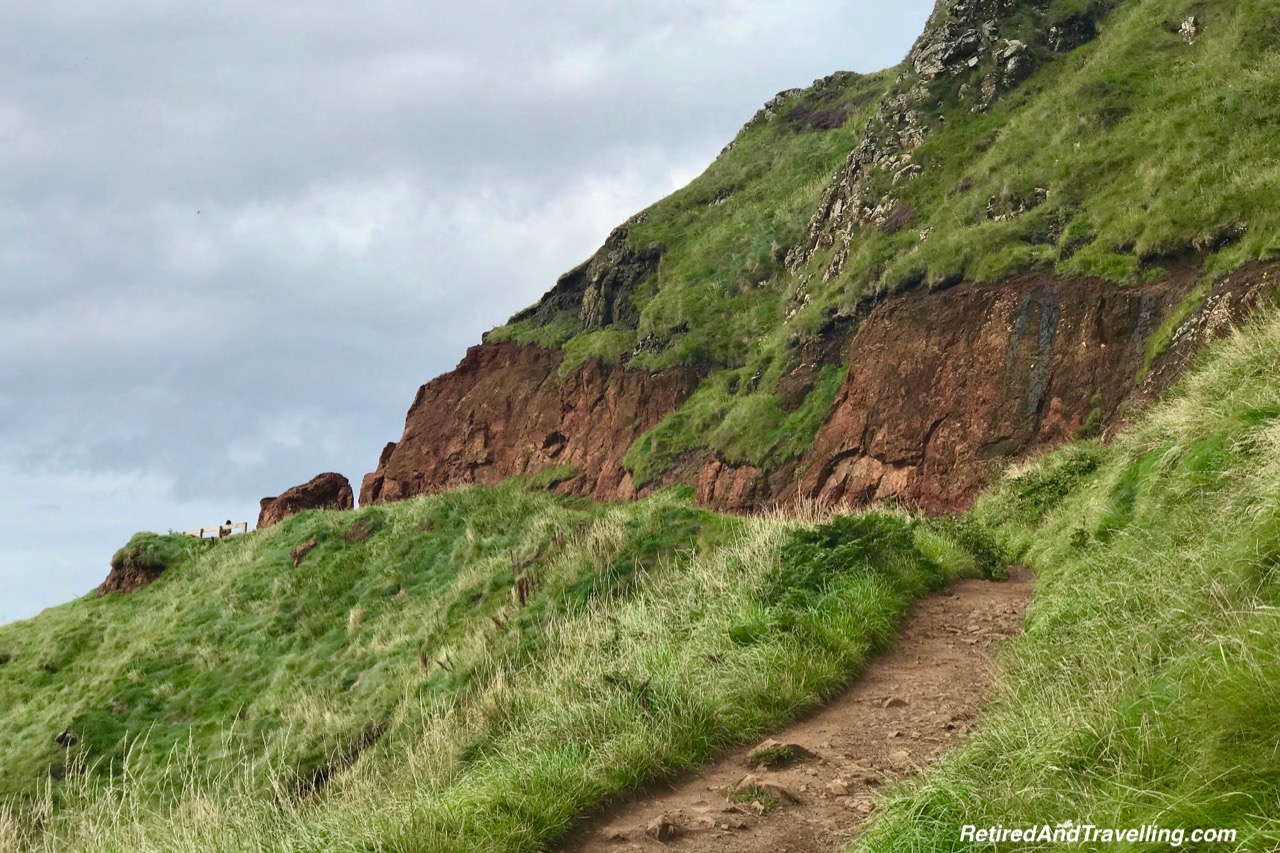 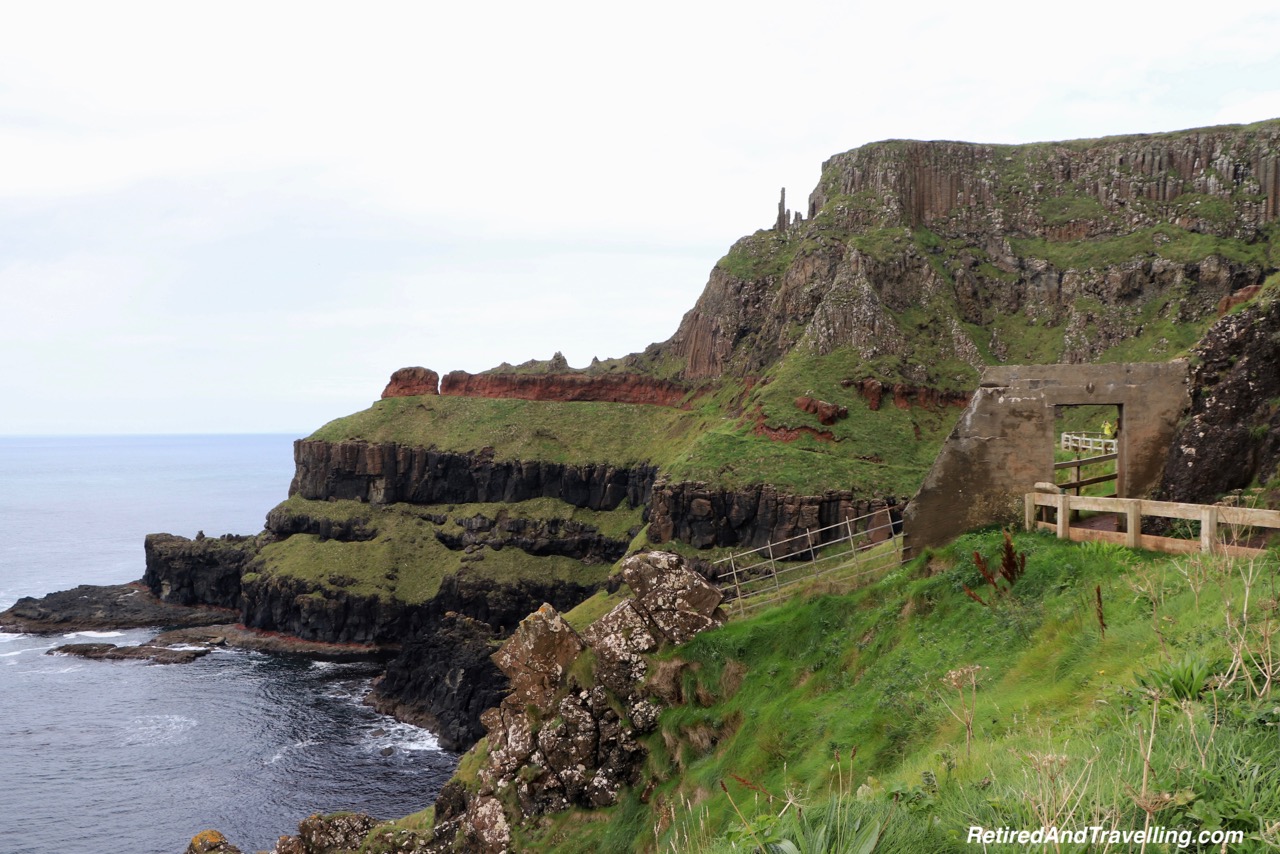 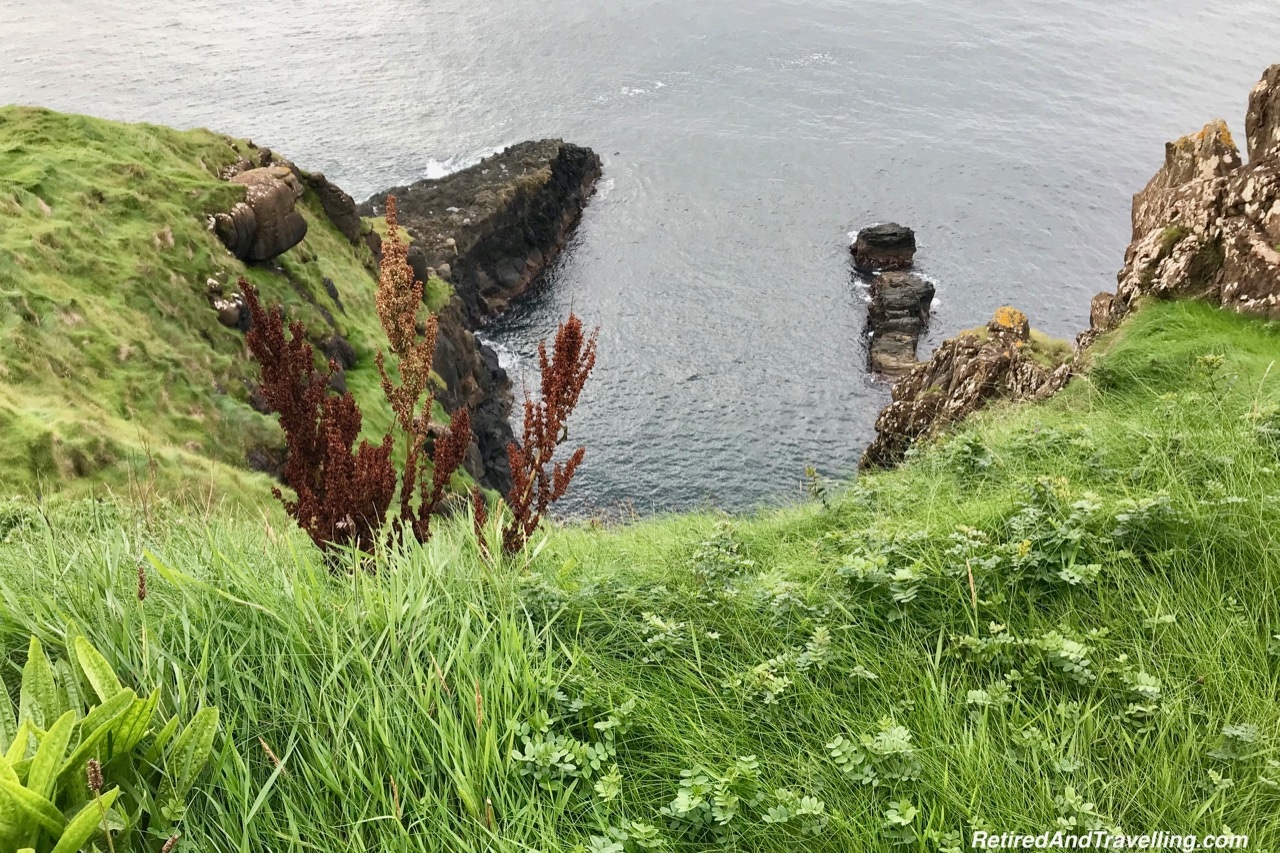 As we climbed down the path, we saw another path going up to the Shepherd’s Steps. We were sure there would be another great view if we had the time and energy to climb yet another hill! 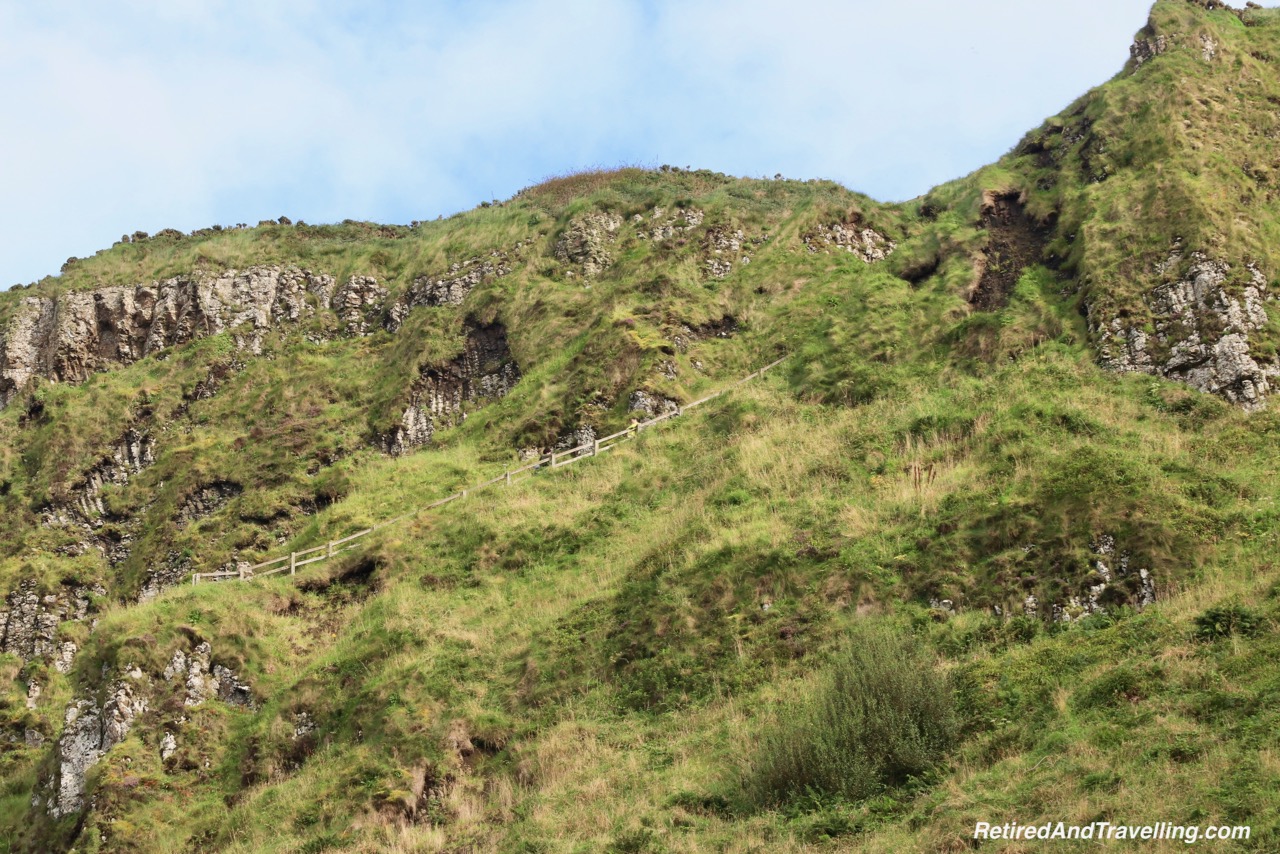 We were so glad we hustled and climbed the hill to the viewpoint. Definitely a highlight of our visit to the Giant’s Causeway.

More Views As We Wandered Back To The Visitor Centre

We walked back down to the stones. And since we still had time, we walked back up the hill to the Visitors Centre. This walk gave us a great view out over the Portnaboe Bay at low tide. And more views of fascinating rocks. 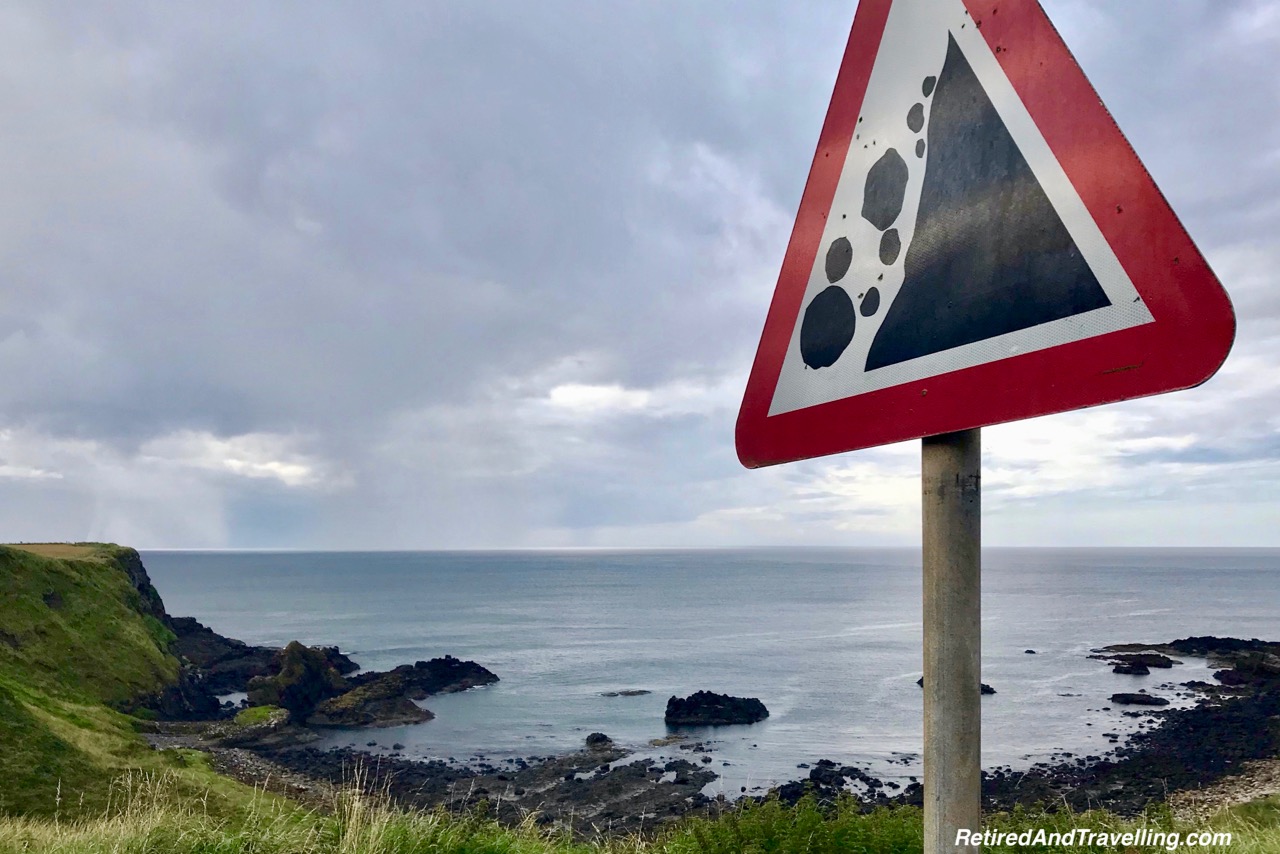 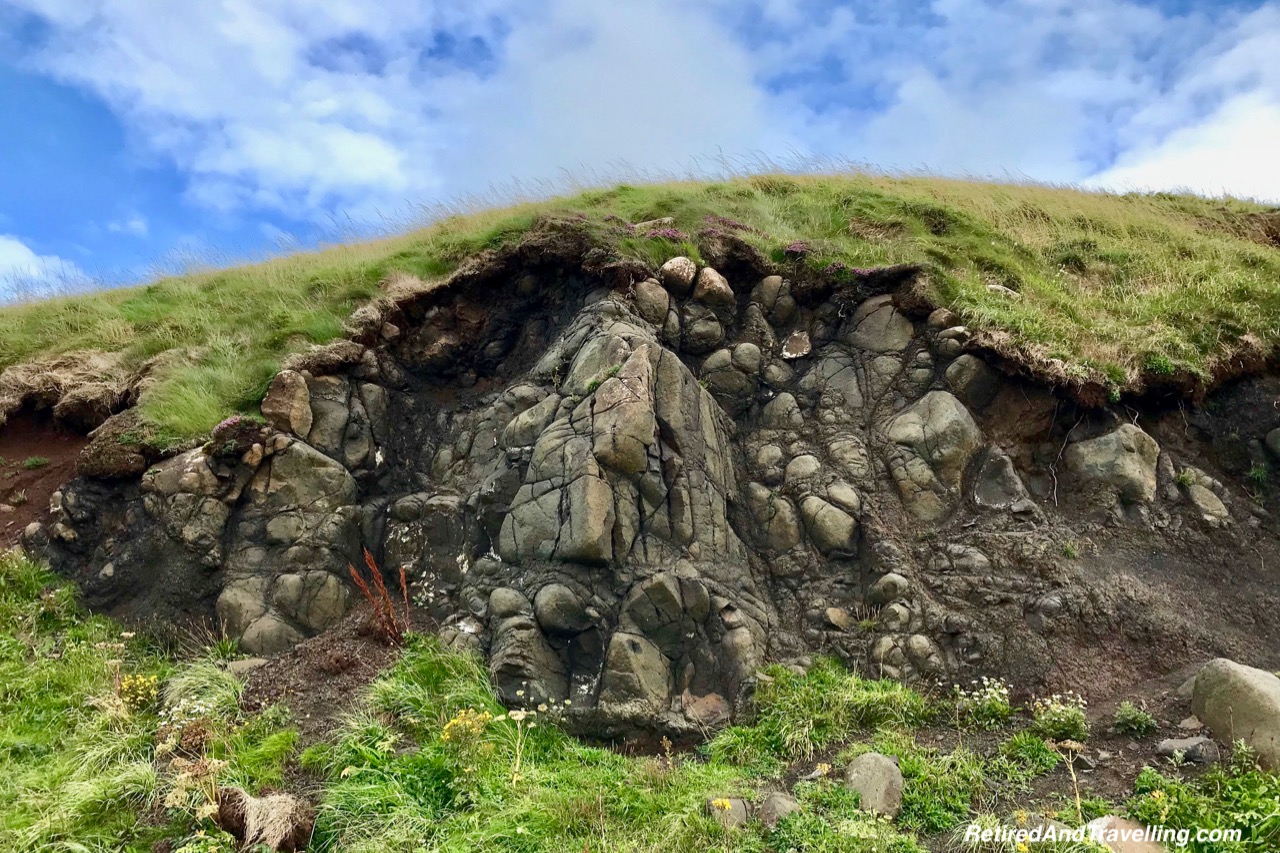 At various points, we were amused to find signs that continued the fanciful story of the Giant’s Causeway. Rocks had names for shapes they made. And more details of the giant’s tale were added. When I finally found the camel rock, I was not sure I would have known what it was without the signs! 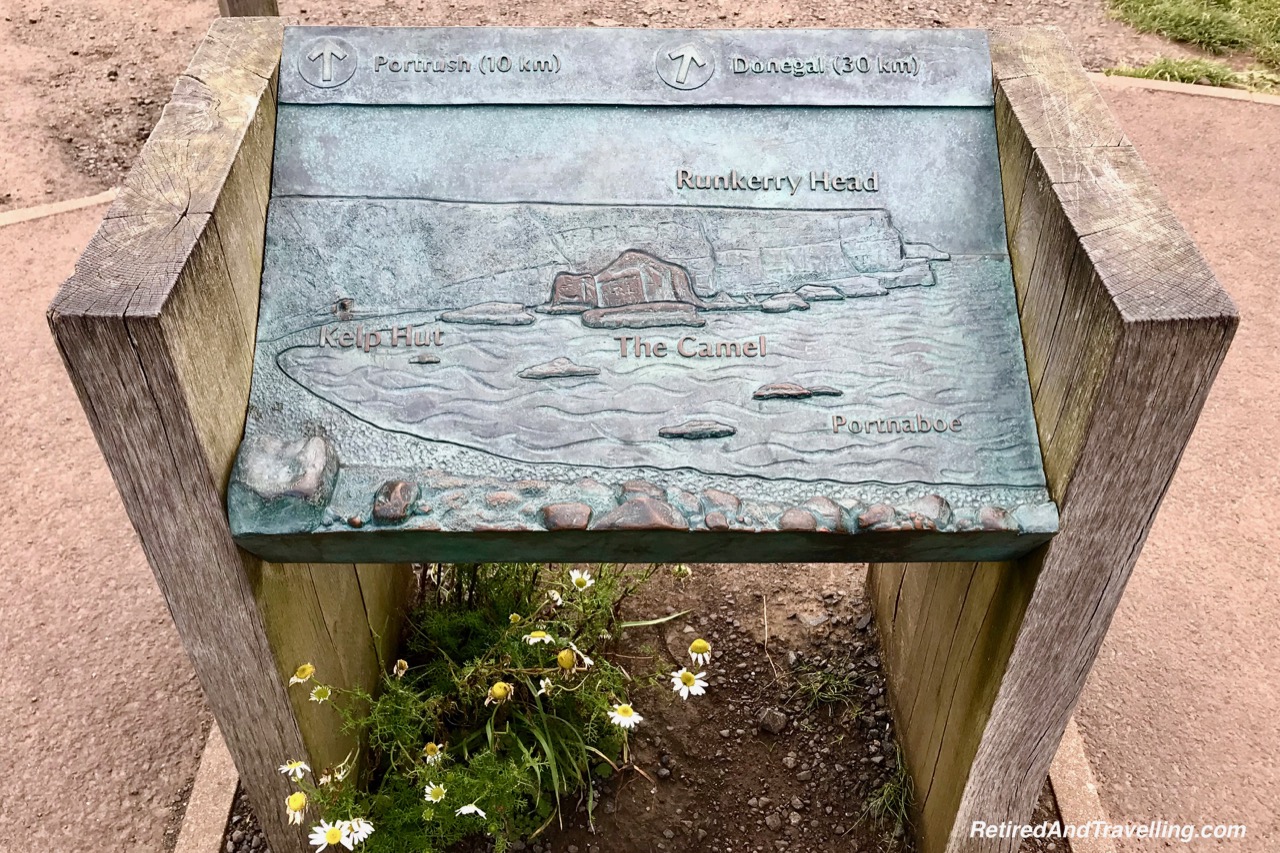 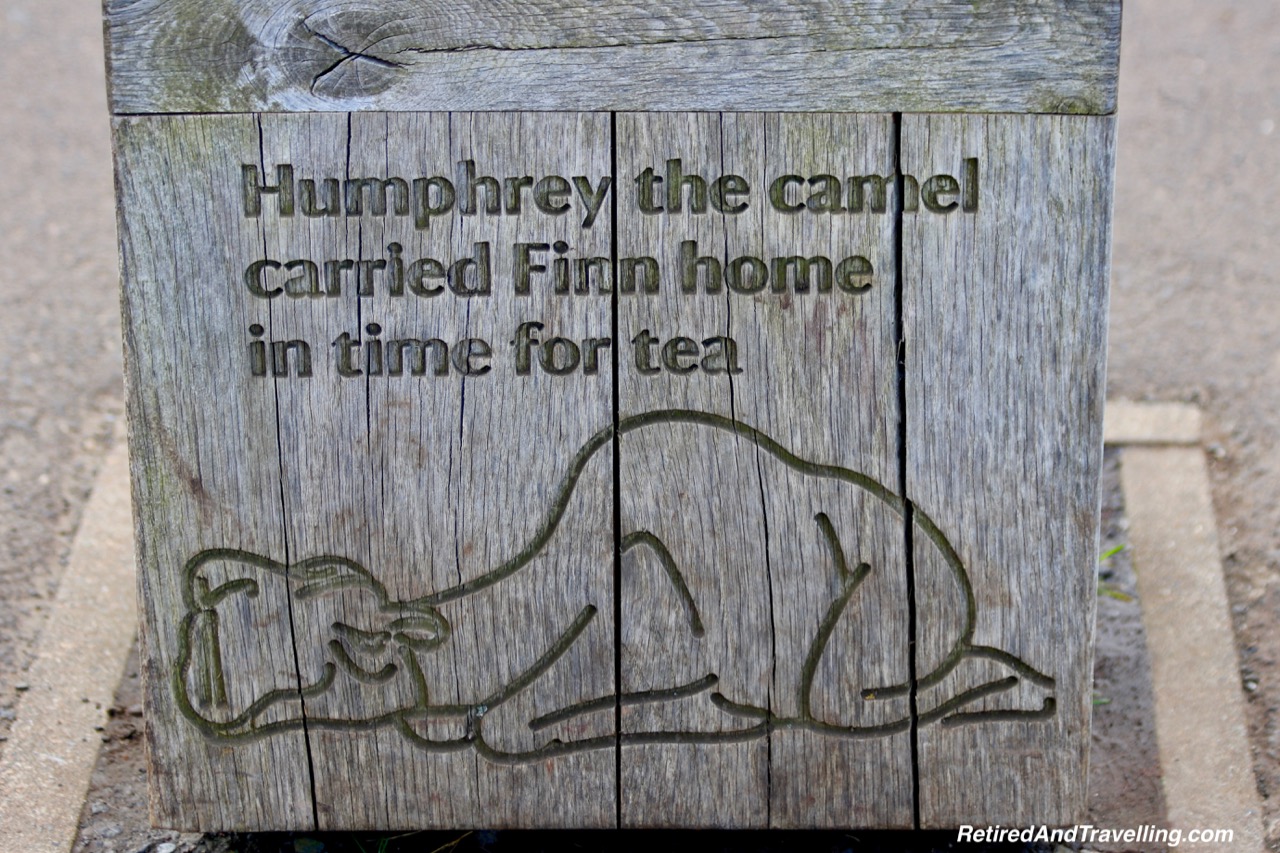 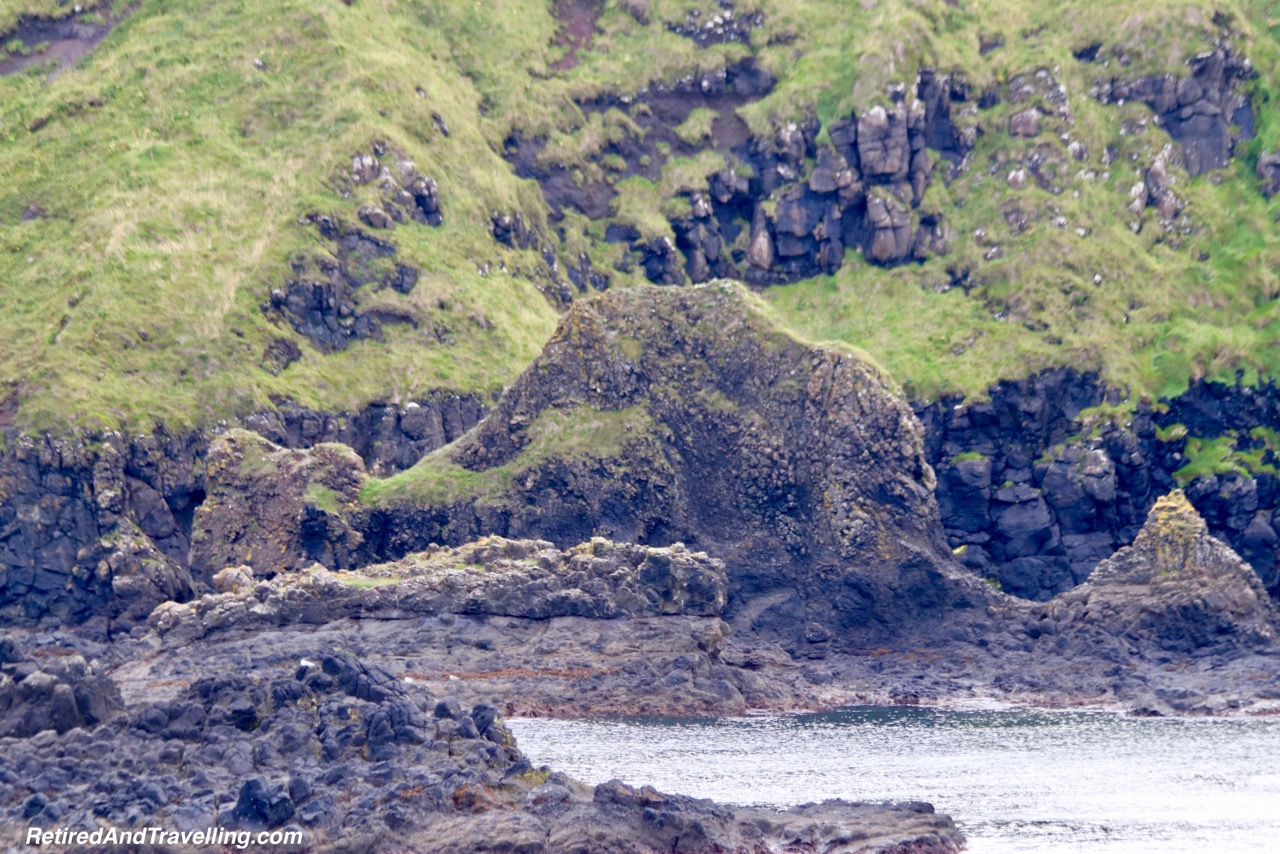 We were just about out of time so we missed the chance to walk the yellow path to another viewpoint. But we were not disappointed with the amazing views we saw. A fascinating stop at the Giant’s Causeway was a great treat on our tour of Ireland from north to south.

We Enjoyed Our Stop At The Giant’s Causeway

We were delighted with our first stop in Northern Ireland when we did a cruise of the Nordic countries. The Giant’s Causeway was a geological wonder. And a great fairy tale too.

Our next stop in Ireland was in Belfast. We were excited to continue our exploration in Northern Ireland.

Have you done a stop at the Giant’s Causeway? Did you get a chance to hike the paths around the site? 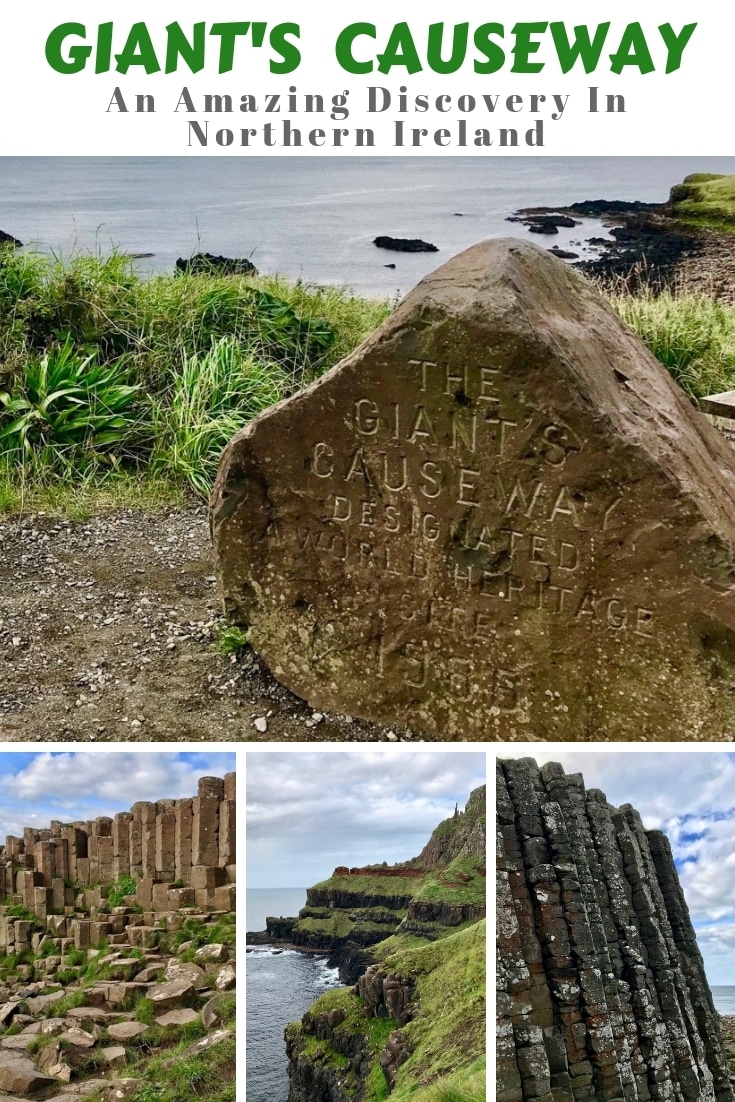 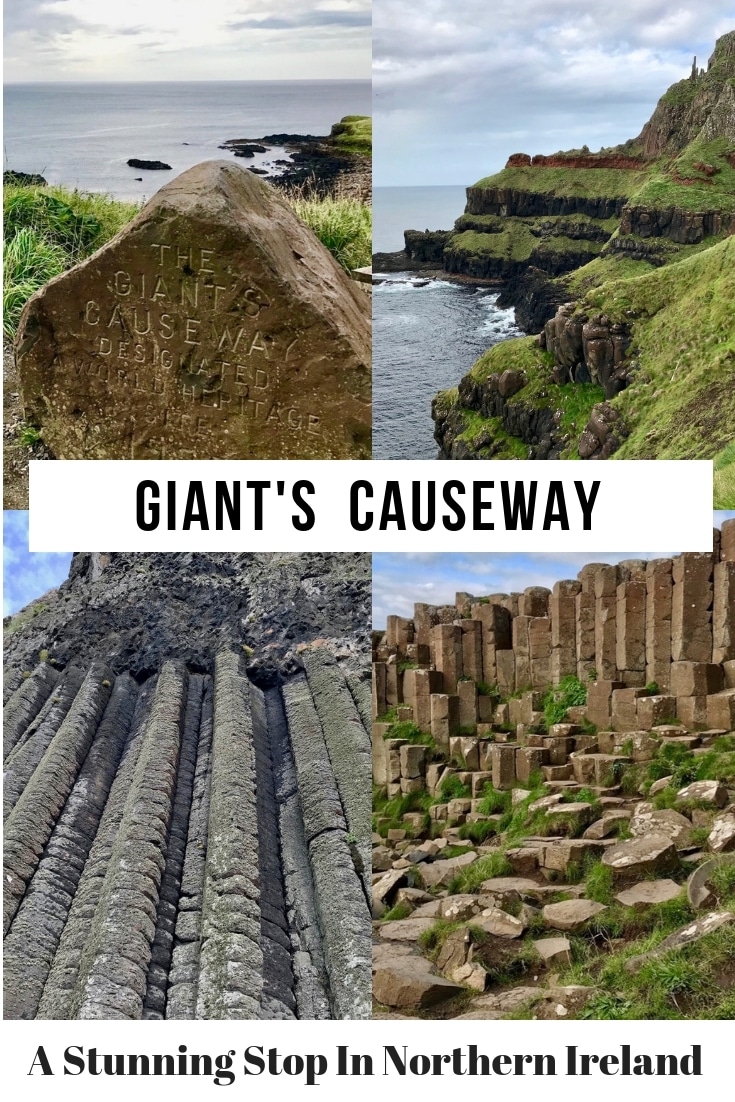