A Quick Stop In The Orkney Islands 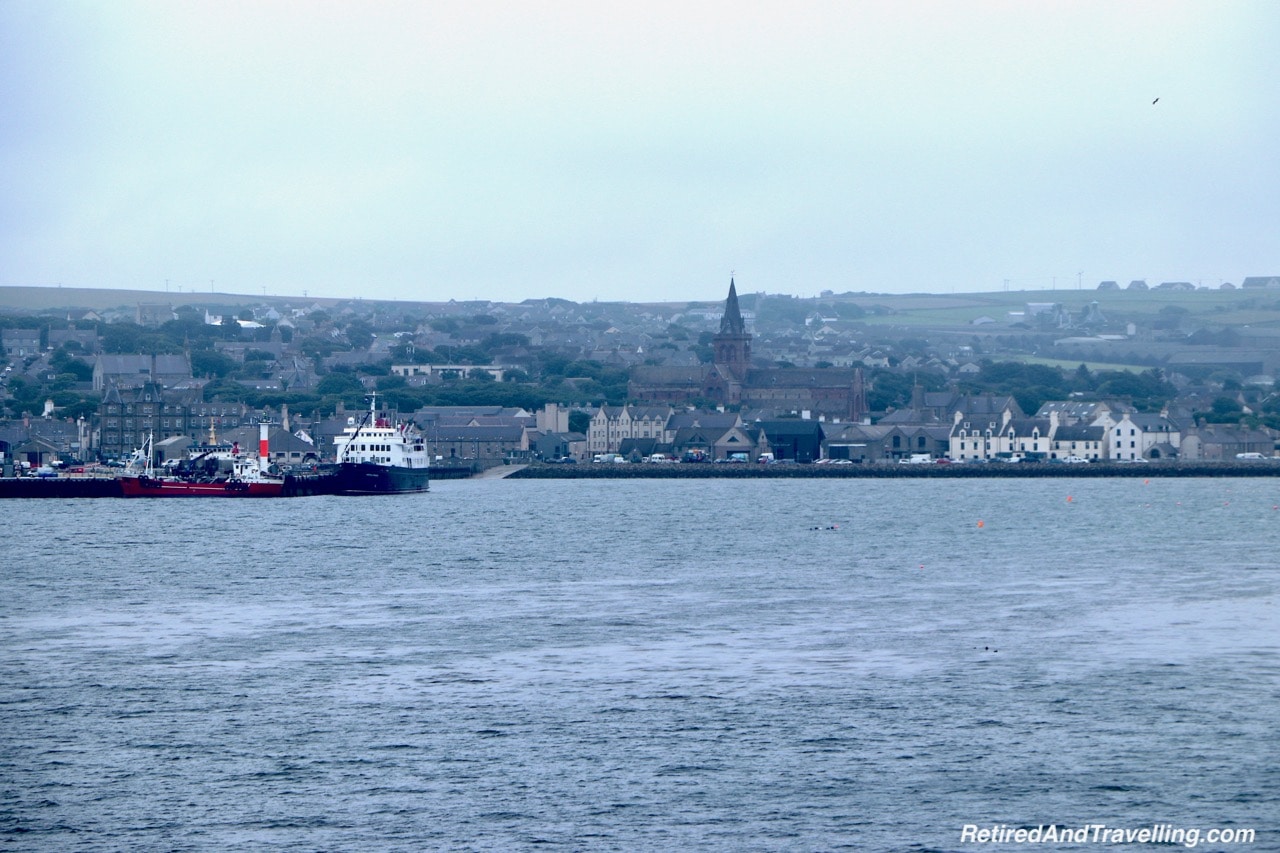 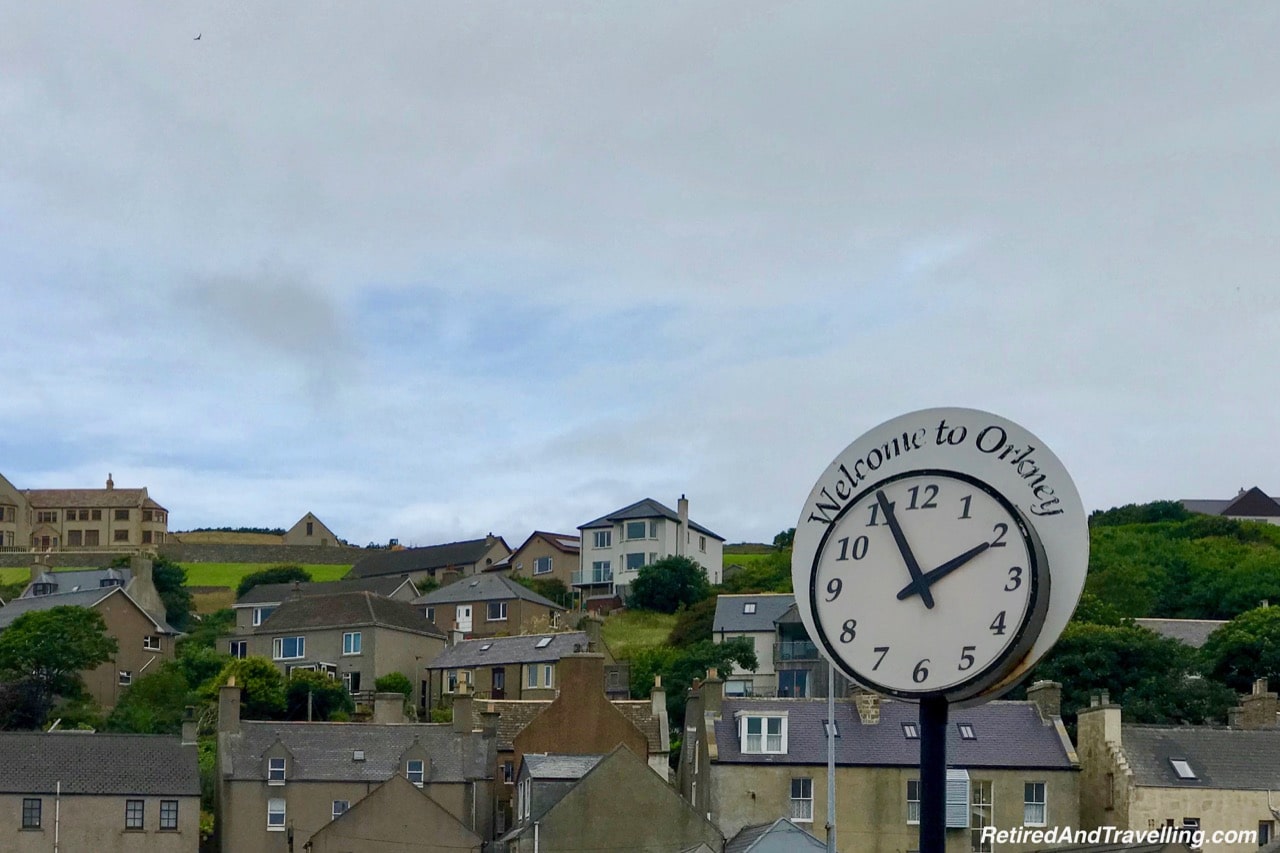 As with many of the places we stopped on our cruise of the Nordic countries, the Orkney Islands were originally part of Norway. But in 1468, the king of Norway Christian I lost the islands to Scotland as part of the dowry for his daughter.

On our quick stop in the Orkney Islands, we chose to tour and see the countryside. And a bit of the Neolithic past. It was a grey, moody day. But it seemed to fit the islands.

Our bus headed out of Kirkwall and into the countryside. At times the road was so narrow, our bus could barely make it down the road. Vehicles had to pull over to let us pass. As we drove along, we saw farms all along the route. Cows and sheep lazed in the fields. And the horses watched as we passed. The mist hung over the water and the countryside, constantly moving in and out. 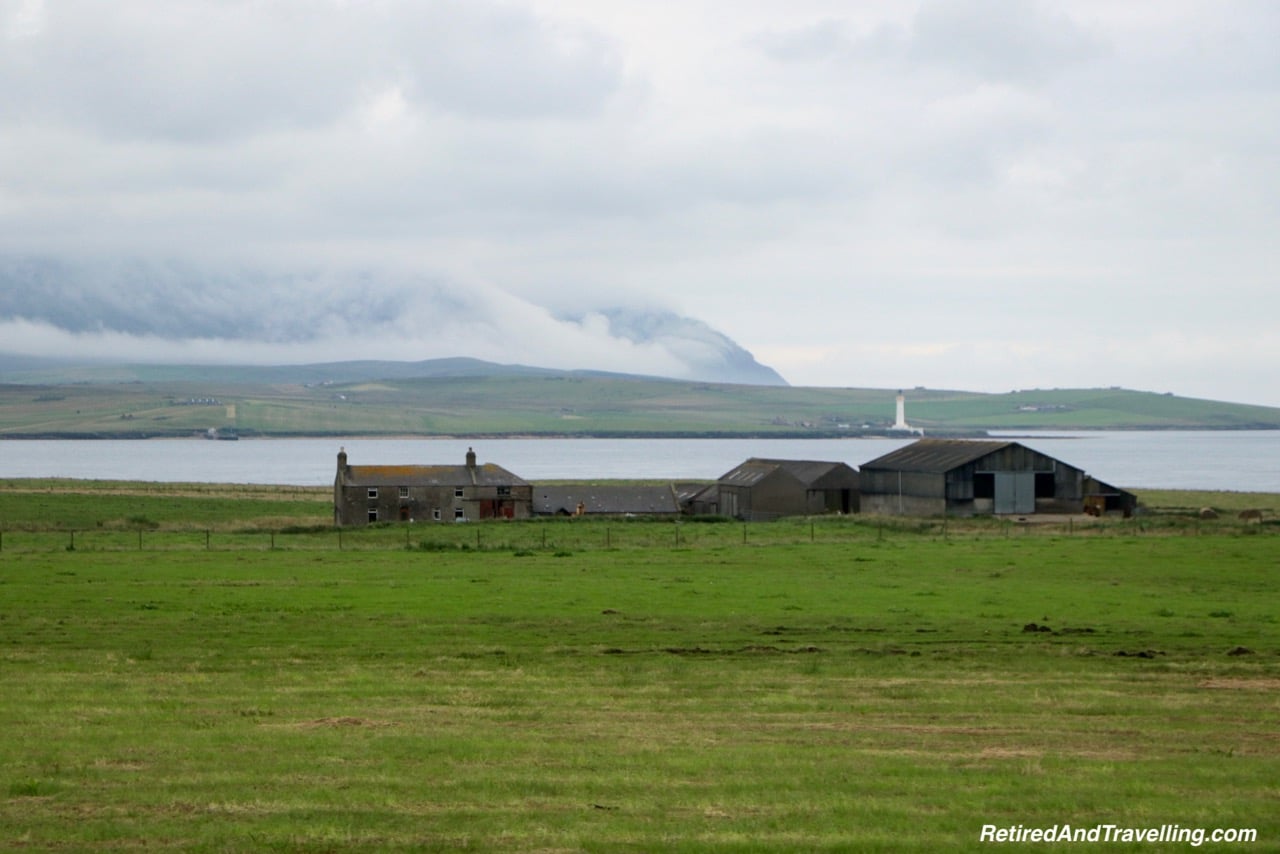 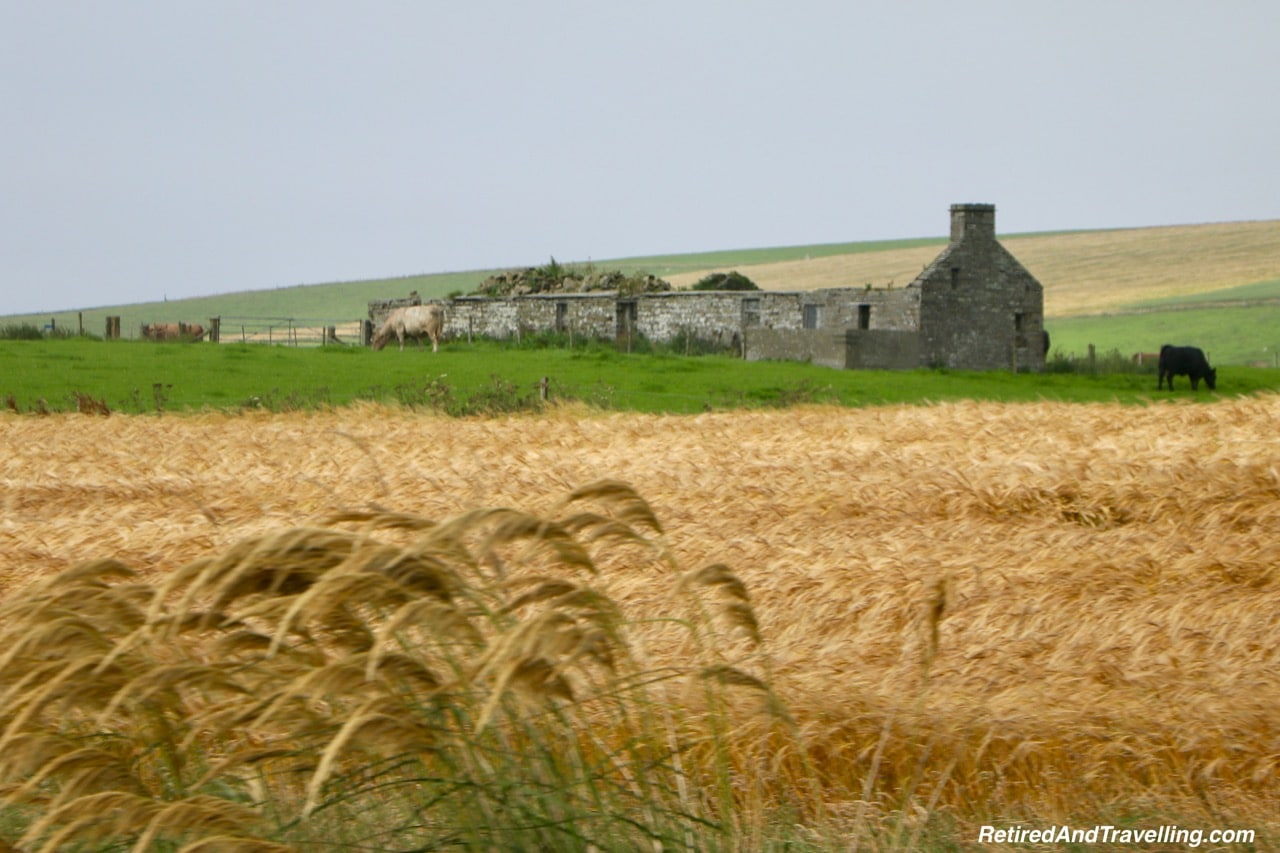 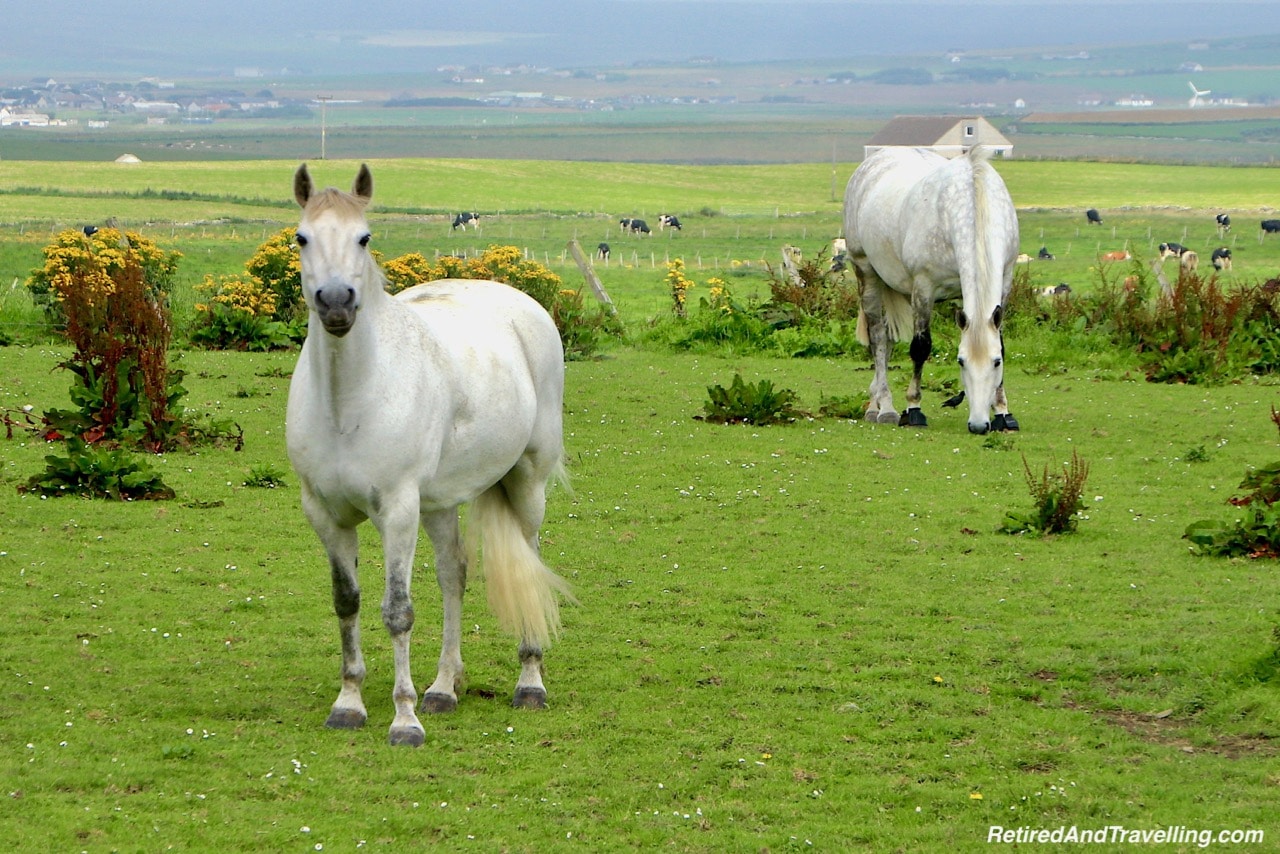 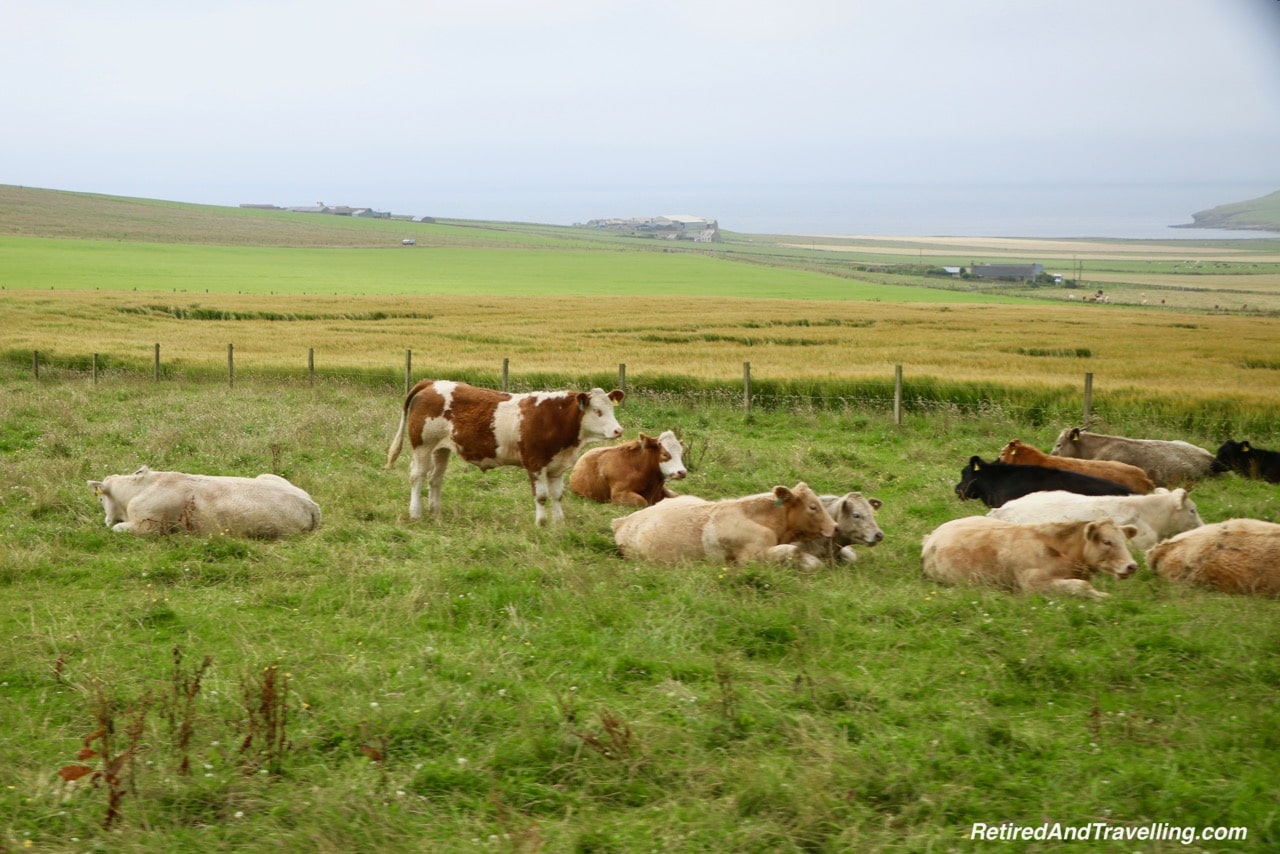 Our guide talked about the fact that the Orkney Islands relied heavily on renewable energy. Solar panels and wind turbines were visible in many areas. We even saw the Wello Penguin boat that was being used to generate power from the waves. This move to 100% sustainable energy was demonstrated again when we visited Iceland on this trip. 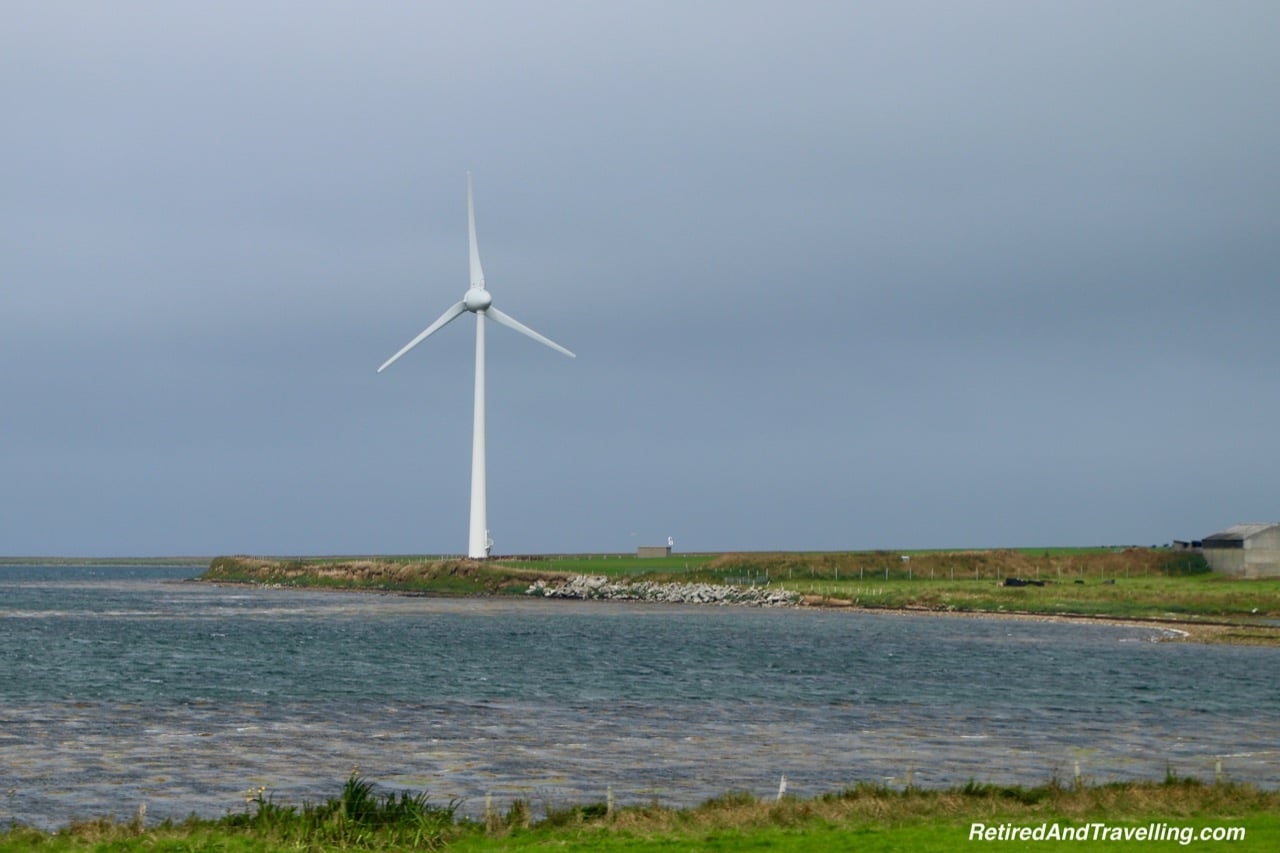 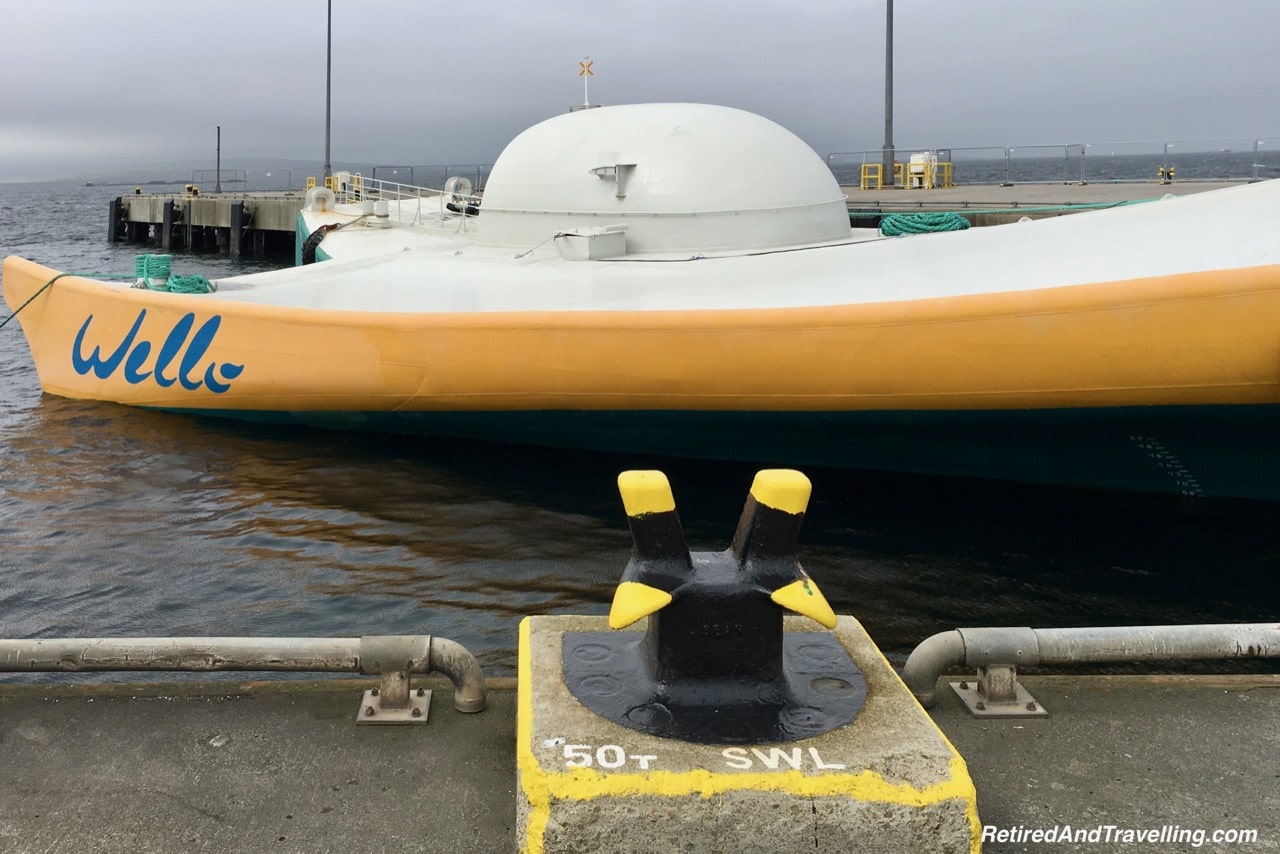 A quick stop in the Orkney Islands provided us with a view of the beauty of these remote islands.

The Fishing Village Of Stromness

Our bus stopped in the fishing village of Stromness and we had some time to wander this village. Many people stayed close to the harbour and looked at the boats. When we looked down the coast, we got a view of the hills in the distance. 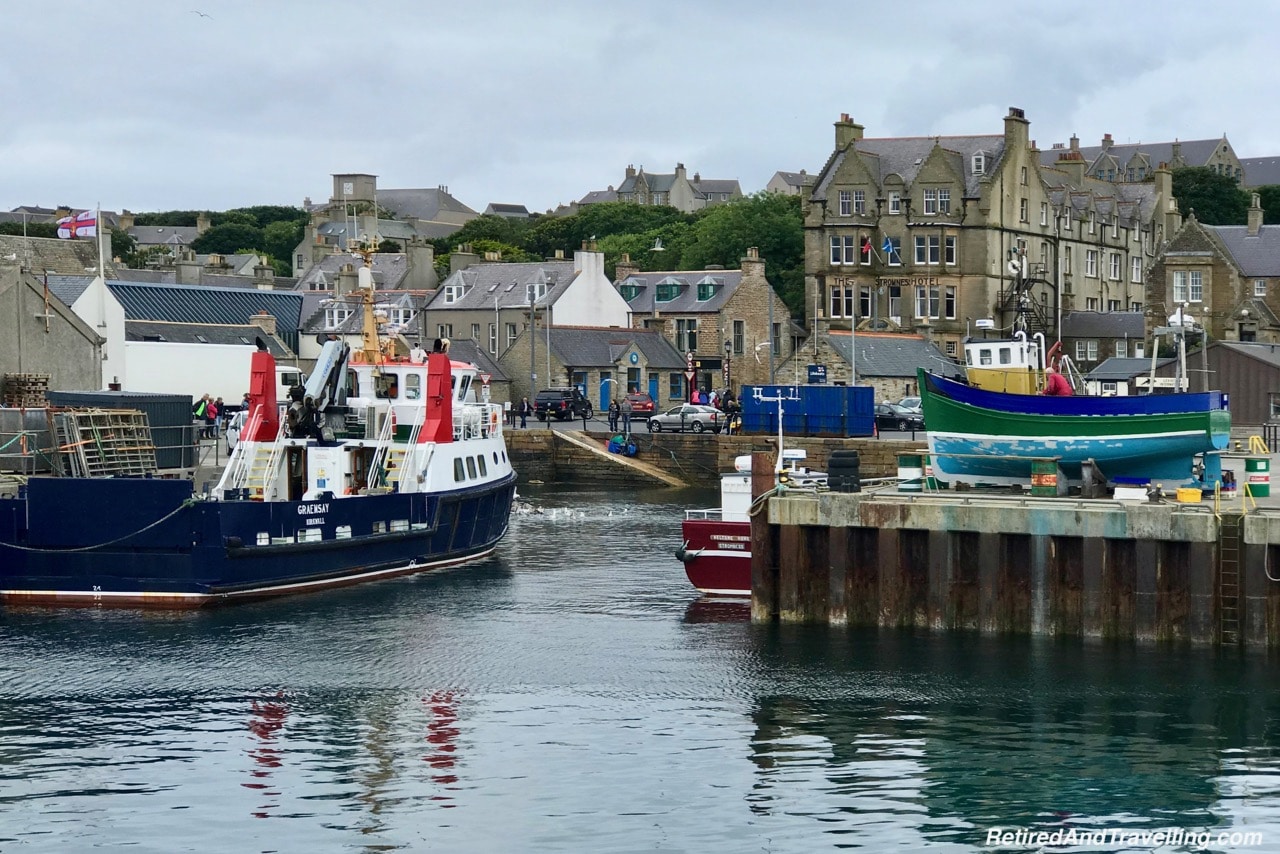 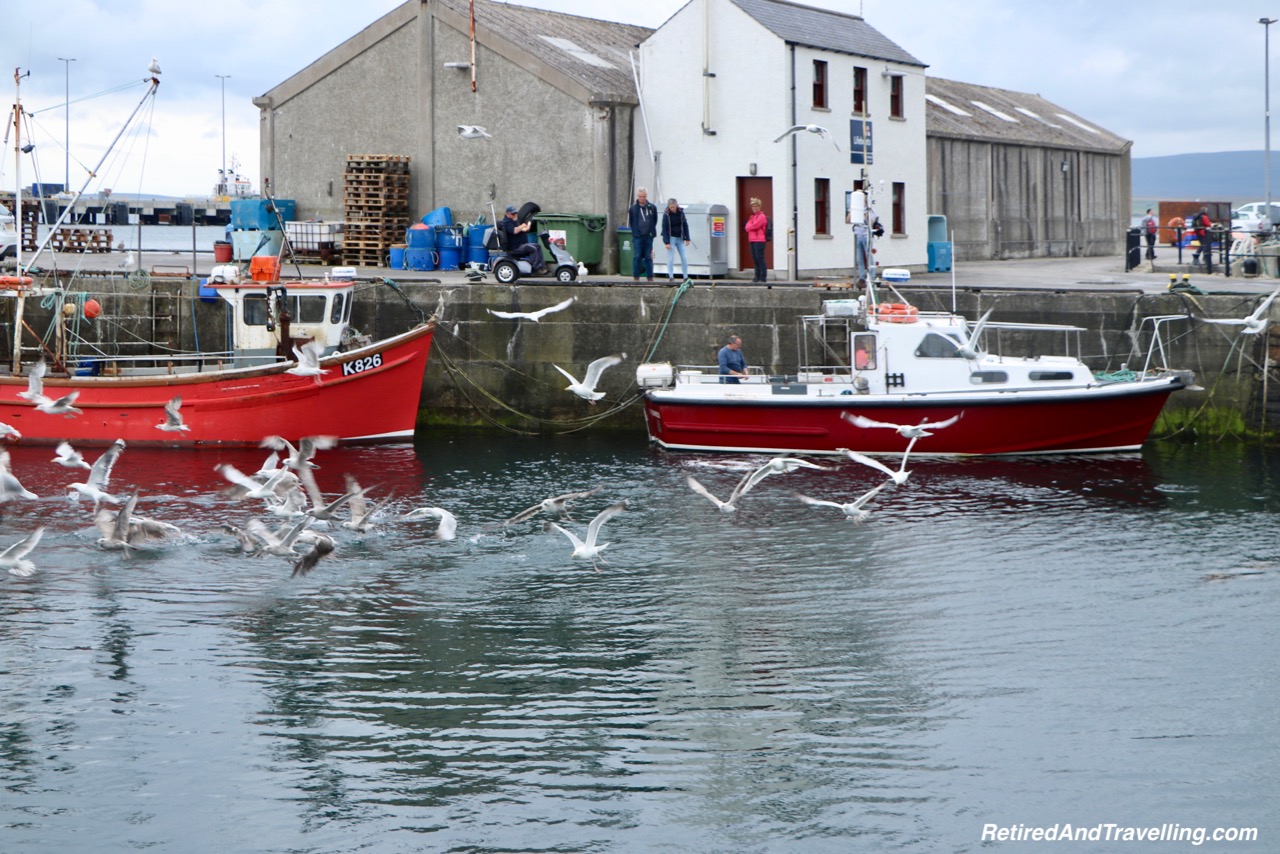 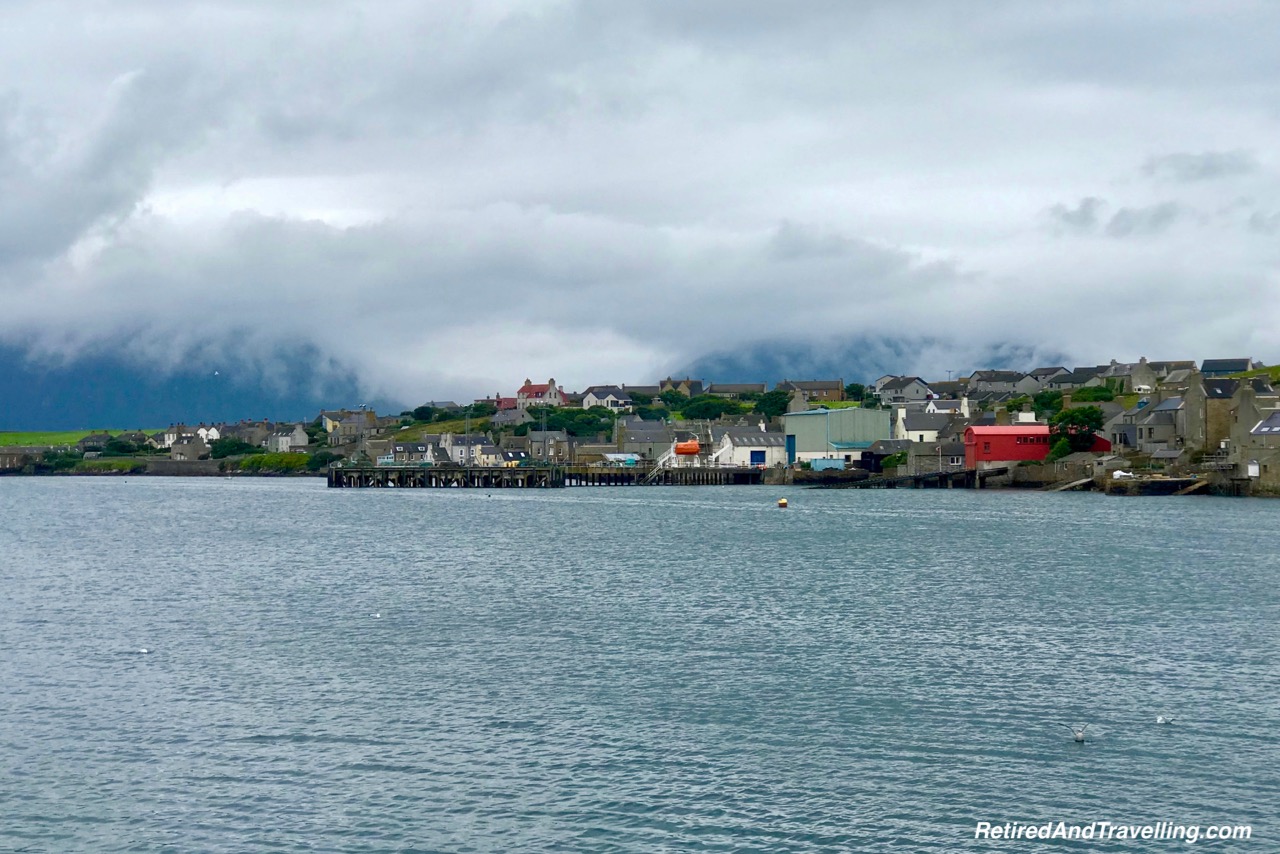 When we wandered the town we found the Town Hall and statues of explorers from this town with a connection to Canada and Sir John Franklin. But we were surprised to see a sign that talked about the Hudson’s Bay Company. This was the early trading company we learned about in Canadian history. It turns out that in the 17th century, the overwhelming majority of employees of the Hudson’s Bay Company were from the Orkneys. The locals were well suited to working in the Canadian climate at that time. 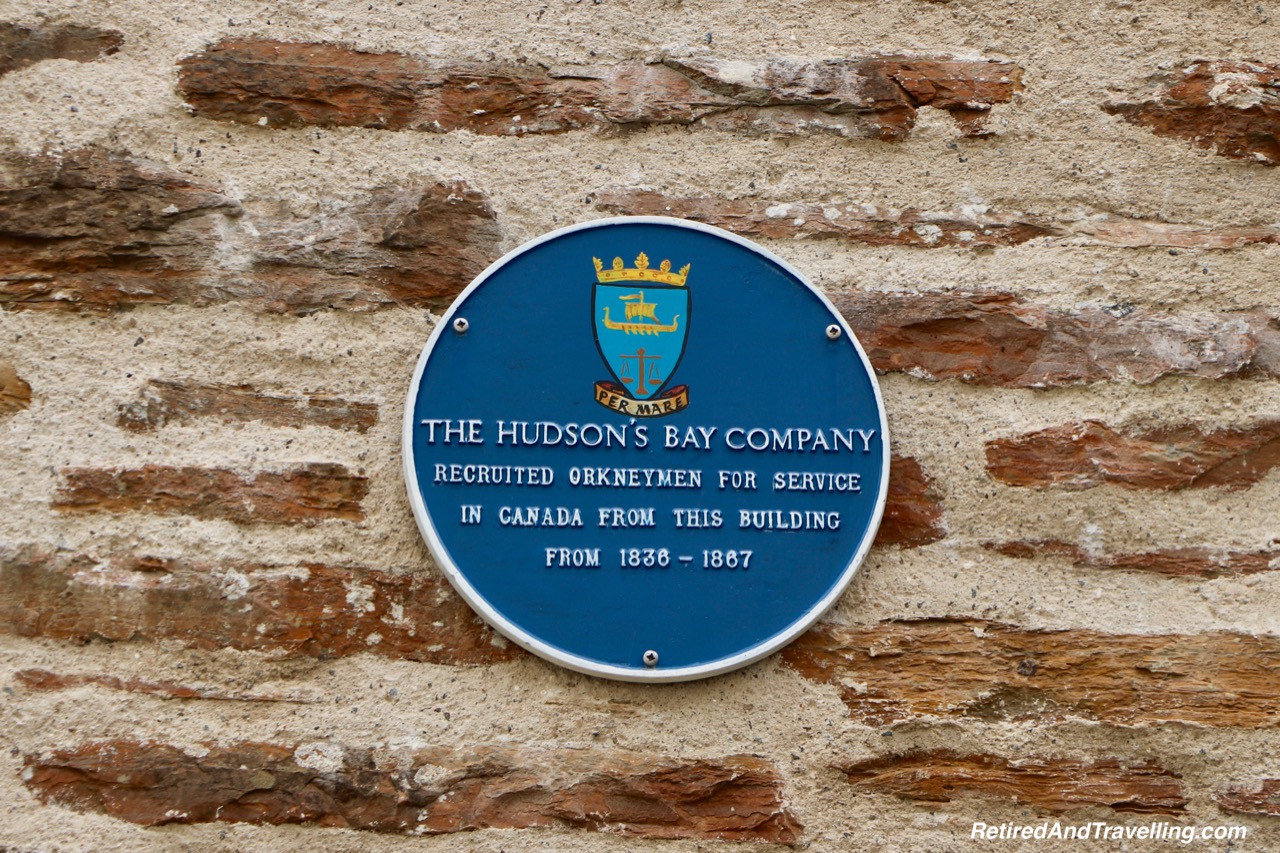 Before we re-boarded our bus, we took a look at some local art on the building side. And a colourful mural in the ferry building. 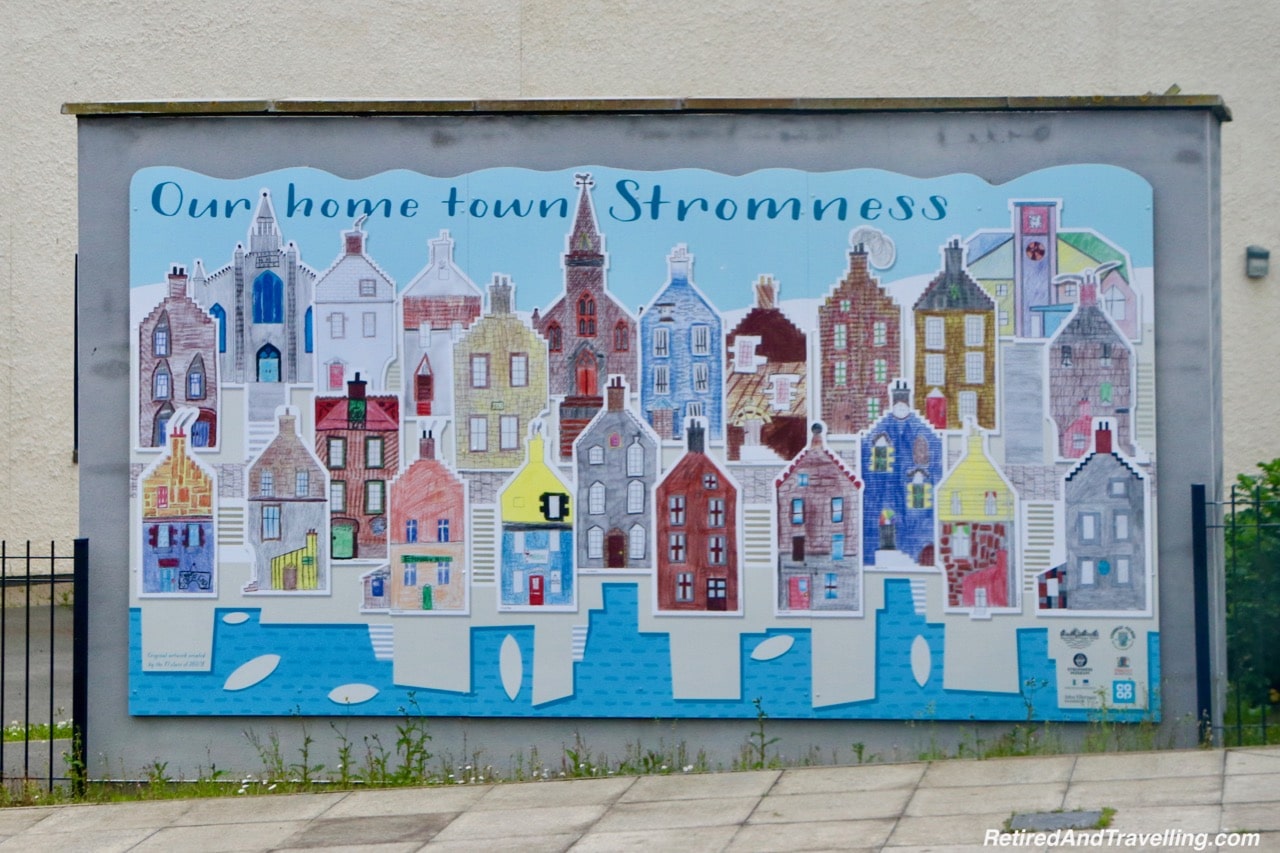 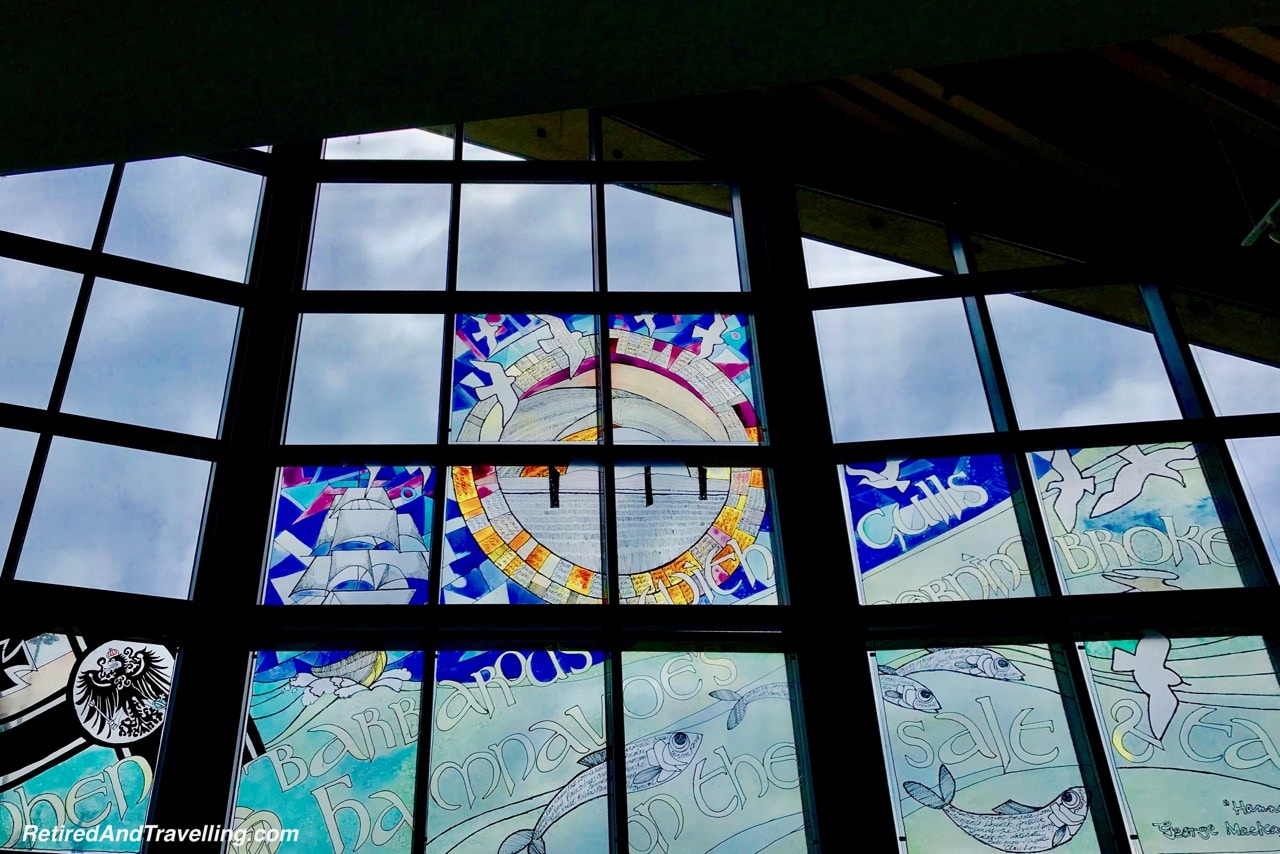 We were glad we stopped in the small village of Stomness on our quick stop in the Orkney Islands.

When the bus pulled into the Standing Stones Hotel, we were happy for a break. The homemade scones with cream and jam were served with tea. 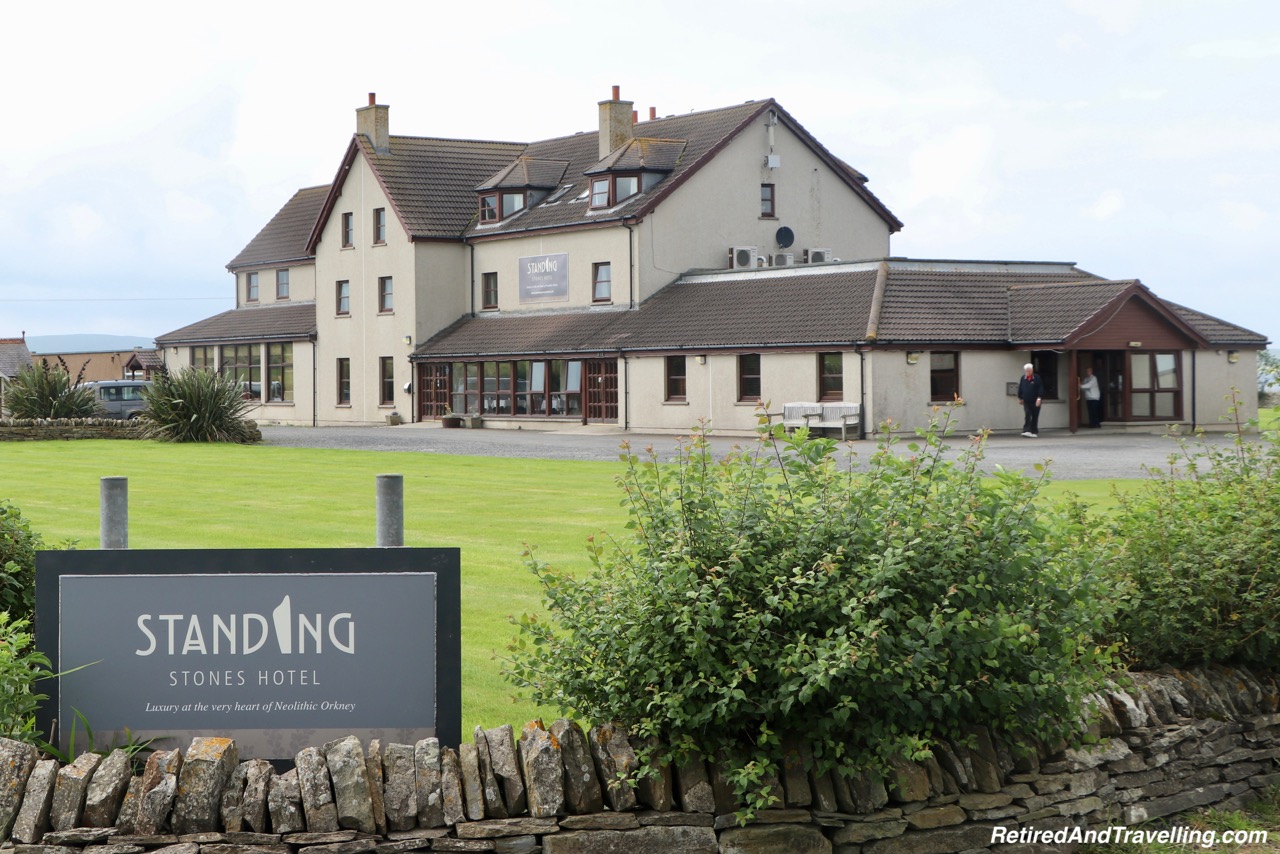 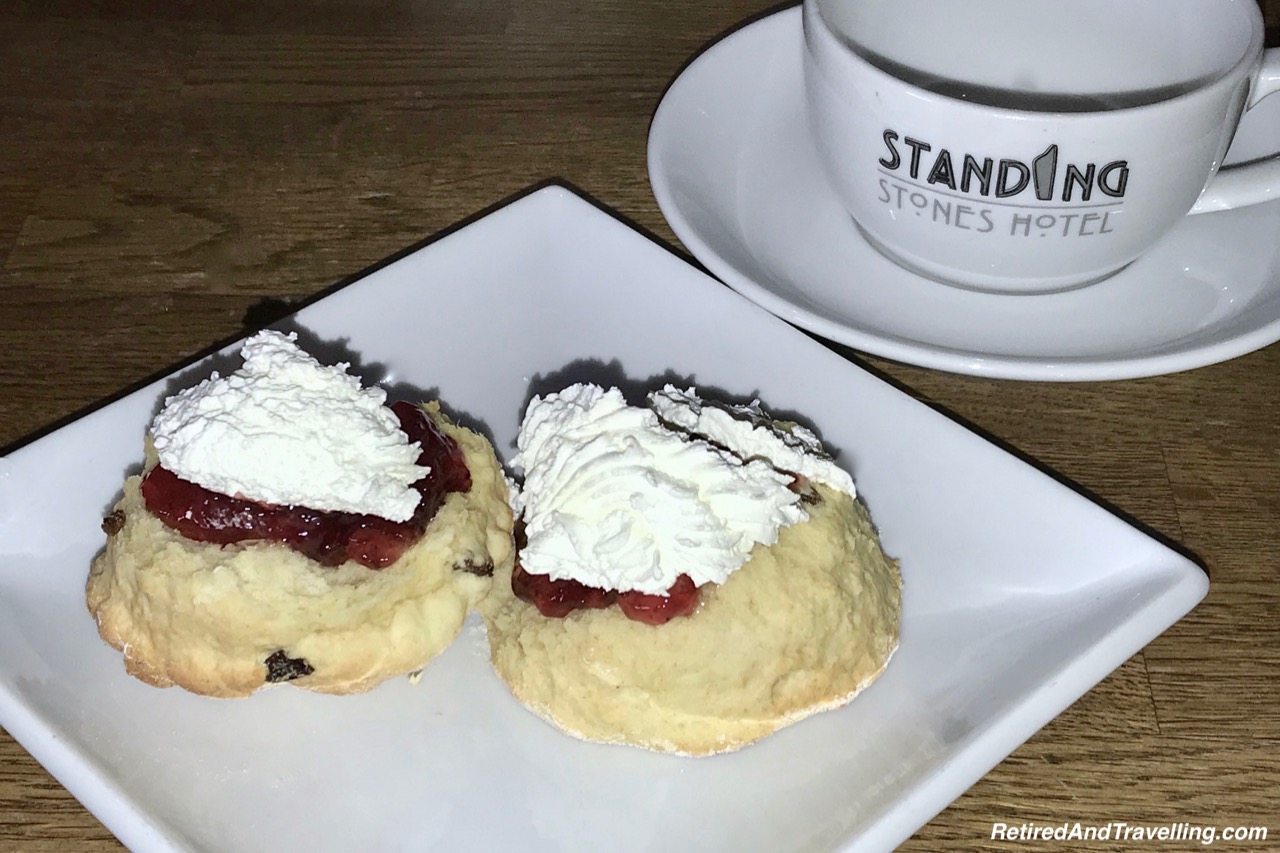 But David was drawn to the bar. We learned that the Orkney Islands had an active beer industry. He looked at the colourful beer pulls to see what this hotel offered. But we did not get to try the Highland Park 12-year-old single malt whisky made on the island and smoked with local peat beds. We were a bit sorry that we missed that tour! But made up for it when we made sure to taste test Irish whiskey in Ireland. 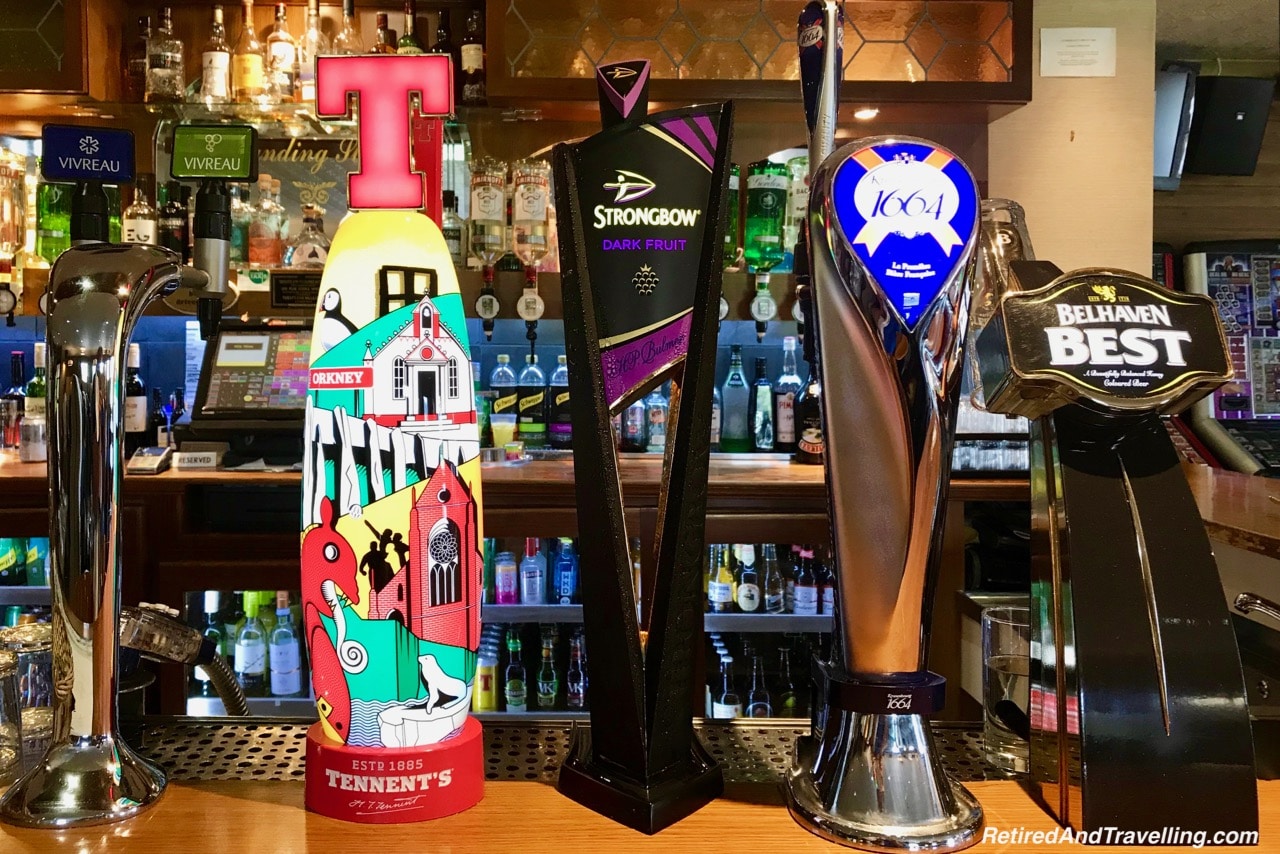 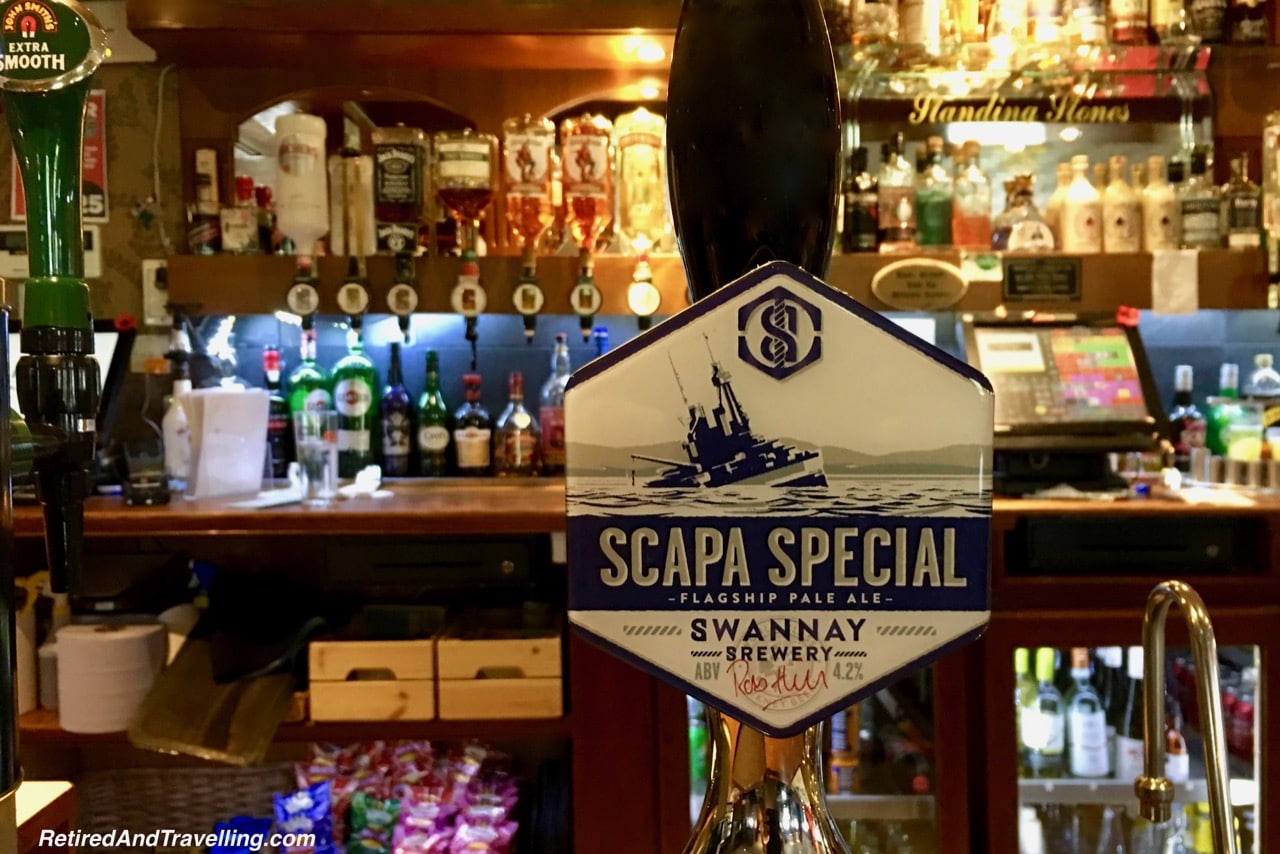 After our snack, we wandered outside to see the view out over the water. Far off in the distance, we could just see our next stop at the Standing Stones of Stenness. 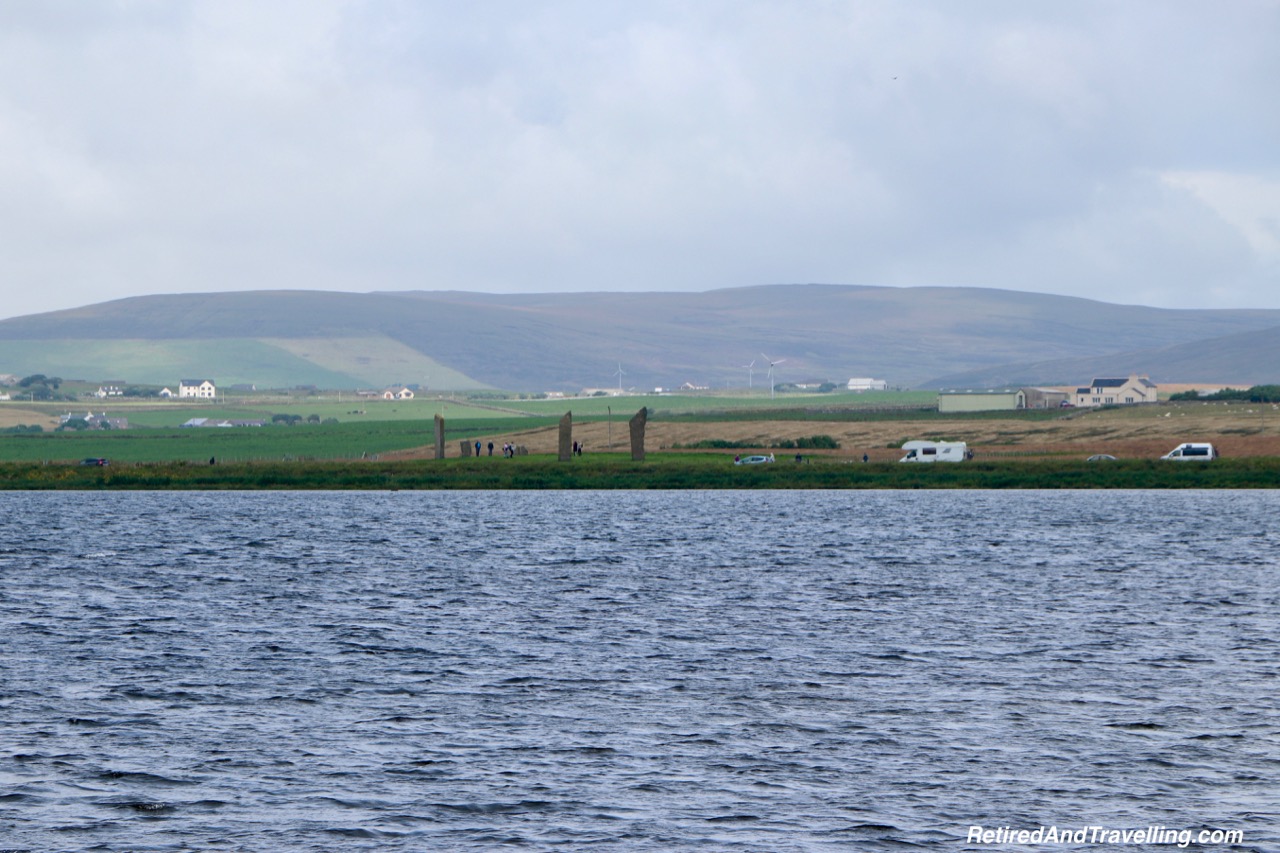 Refreshed on our short stop in the Orkney Islands, we moved on for our next discovery.

We were now in the Neolithic heartland of Orkney. This area was designated as a World Heritage Site due to its wealth of pre-historic archaeology. The earliest archeological discovery was from 6820–6660 BC and indicated the presence of Mesolithic nomadic tribes. But ruins show that the Orkney Islands have been inhabited through history.

We first passed the Standing Stones of Stenness. This 5,000-year-old circle of 12 stones was surrounded with a rock-cut ditch. It appeared to be on the path to the larger Ring of Brodgar. 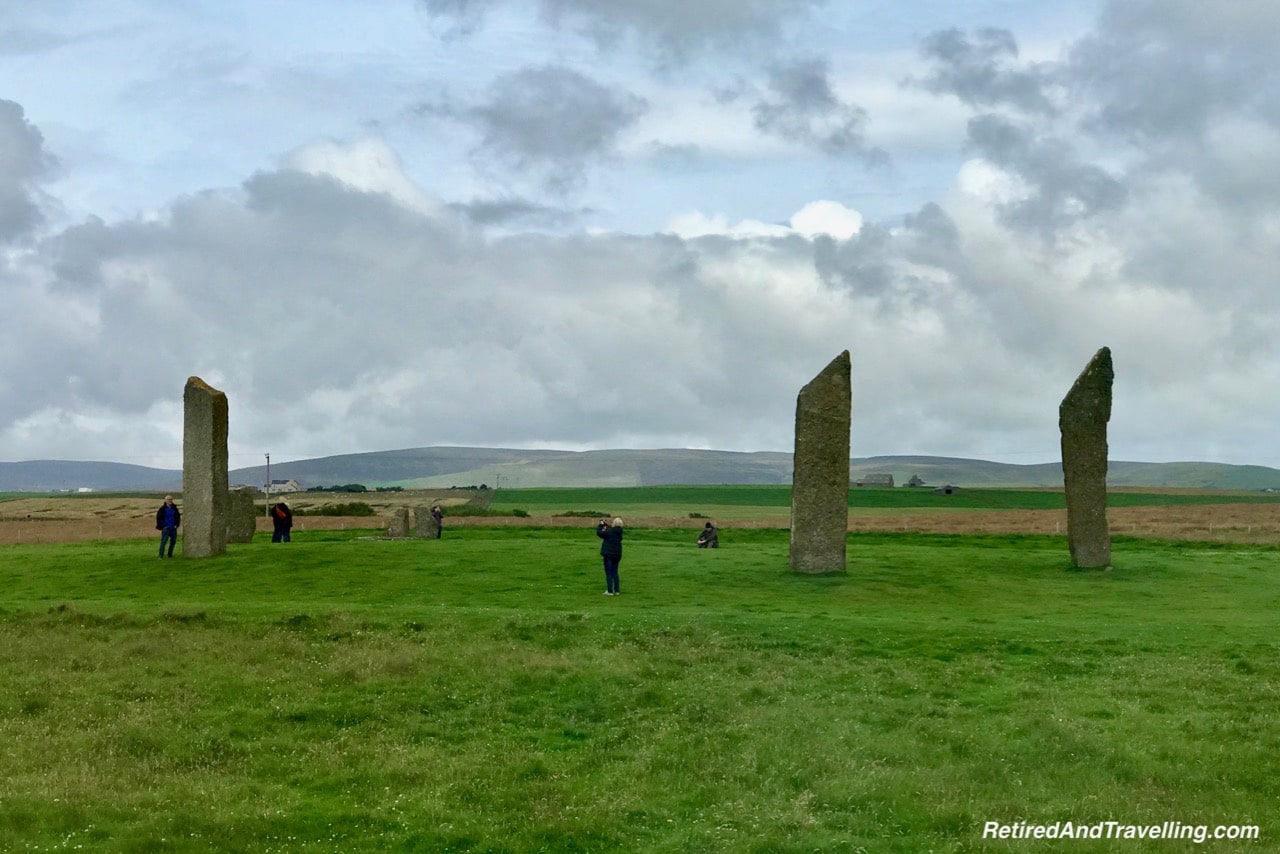 The Ring of Brodgar henge monument was a much larger ring of standing stones. Today only 27 of the 60 original stones are standing. Each of the stones were 6 degrees apart. The stones are encircled by a ditch that was more than 10m across and 3m deep. We saw a new archeological dig being worked on when we visited. 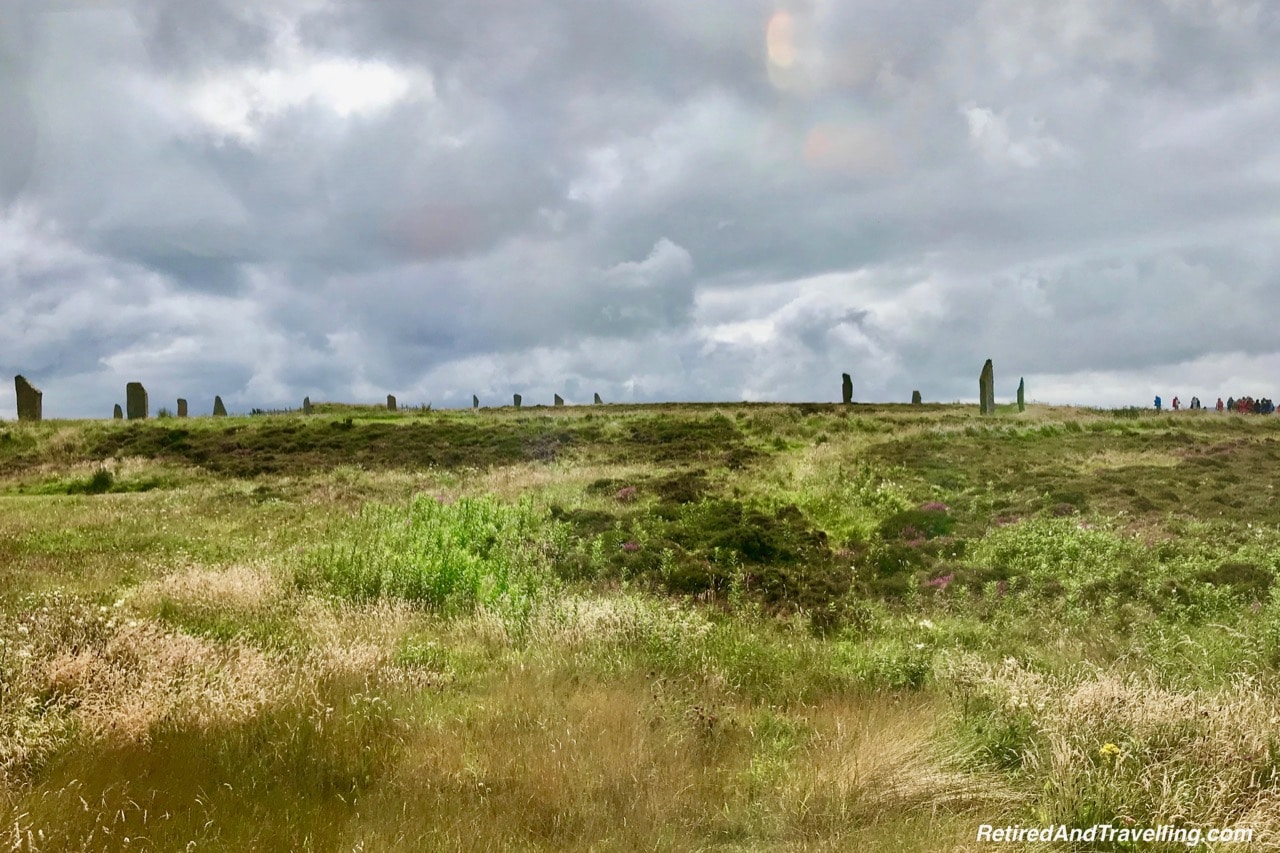 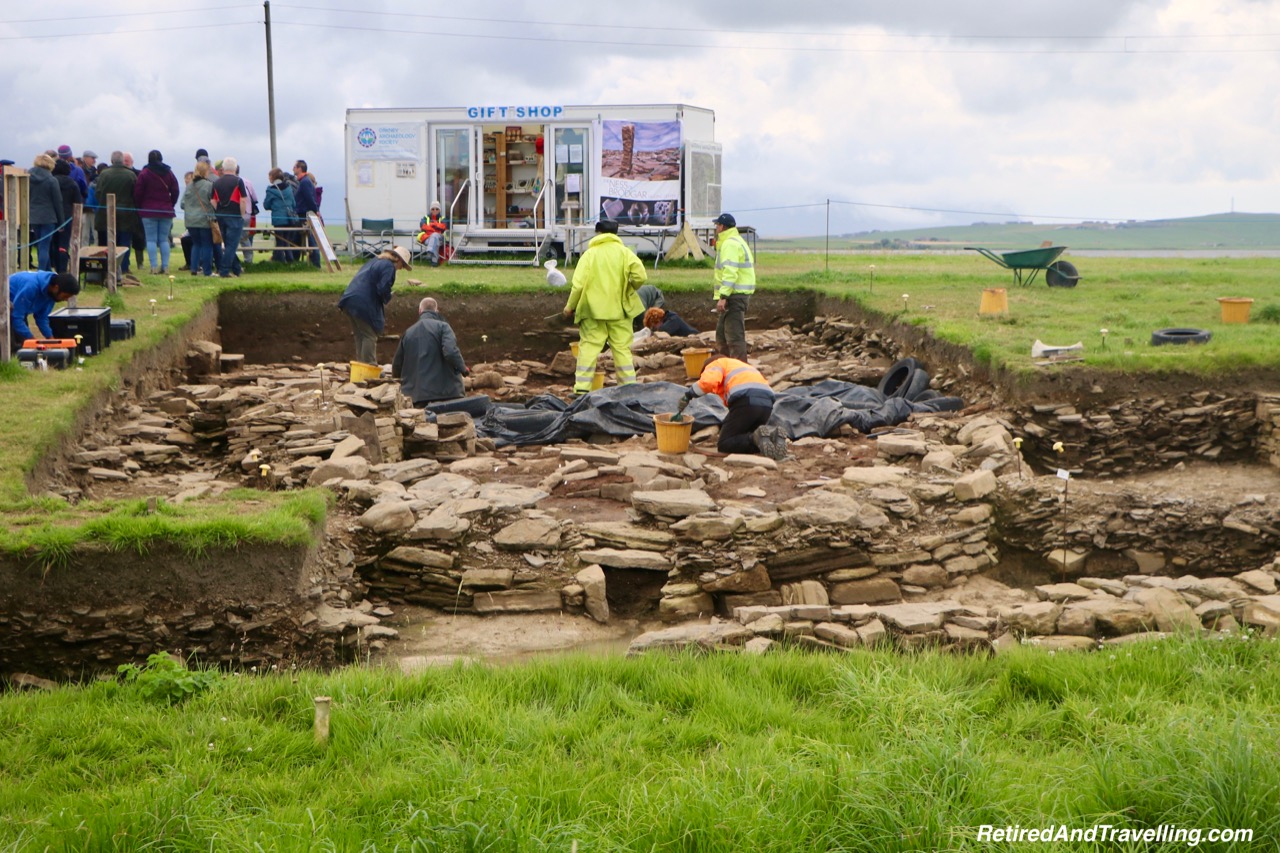 As we travelled around, our guide pointed to other smaller standing stones in the fields. We were excited to see this first view of standing stones. It was a great introduction before we stopped later in the trip to visit the stunning sight of Stonehenge. On a quick stop in the Orkney Islands, you will quickly get an appreciation for the ancient history of these islands.

The Ruins Of Scottish Nobility At Earl’s Palace Birsay

Our final stop was to see the ruins of the Earl’s Palace on the Birsay Bay. Earl Robert Stewart was the illegitimate son of King James V of Scotland. He built Earl’s Palace Birsay in two phases using forced labour starting in the late 1500’s. The ruins stand as a monument to royal pretensions and Robert’s oppression of the people of Orkney.

The building was largely constructed of sandstone. Time and the elements have not been kind the ruins. We wandered around to see a bit of what remained. Only the sheep were at home! 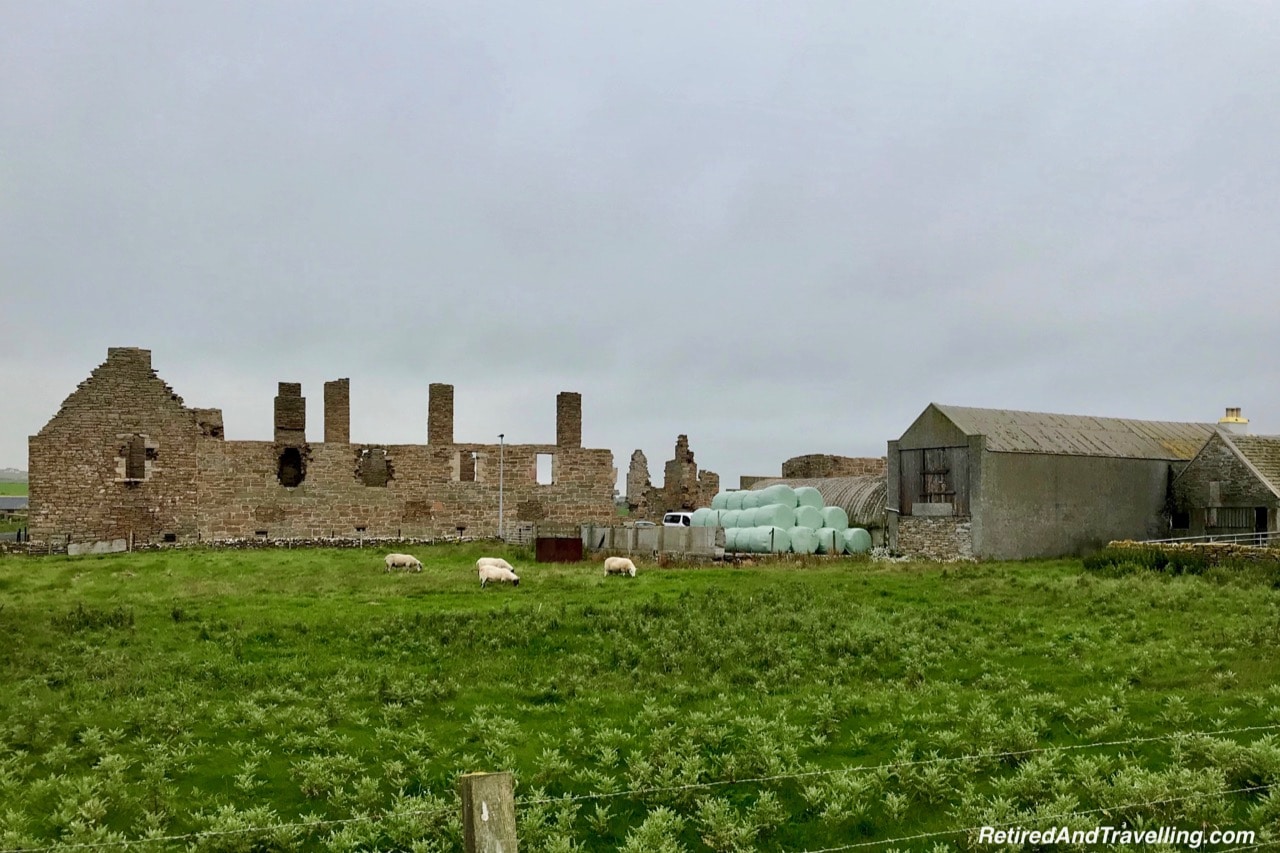 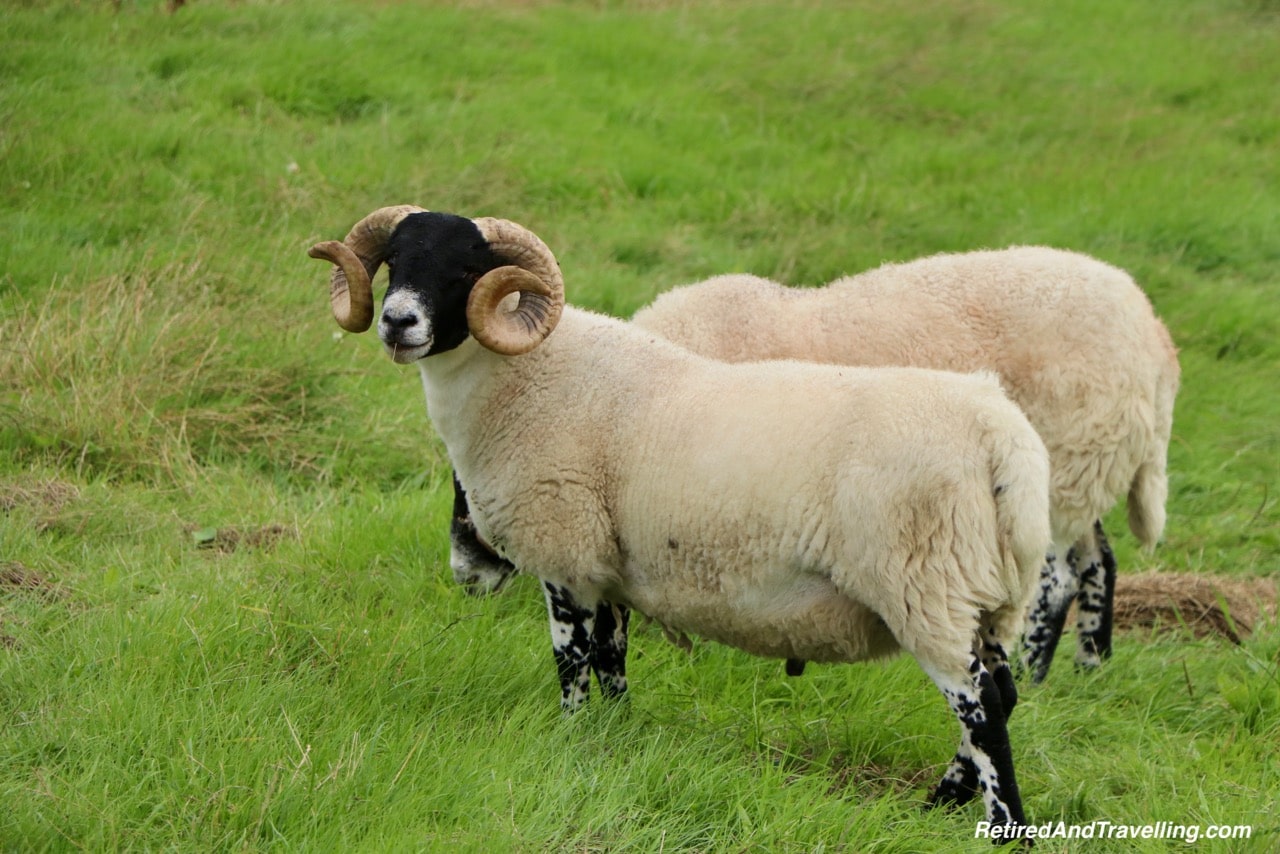 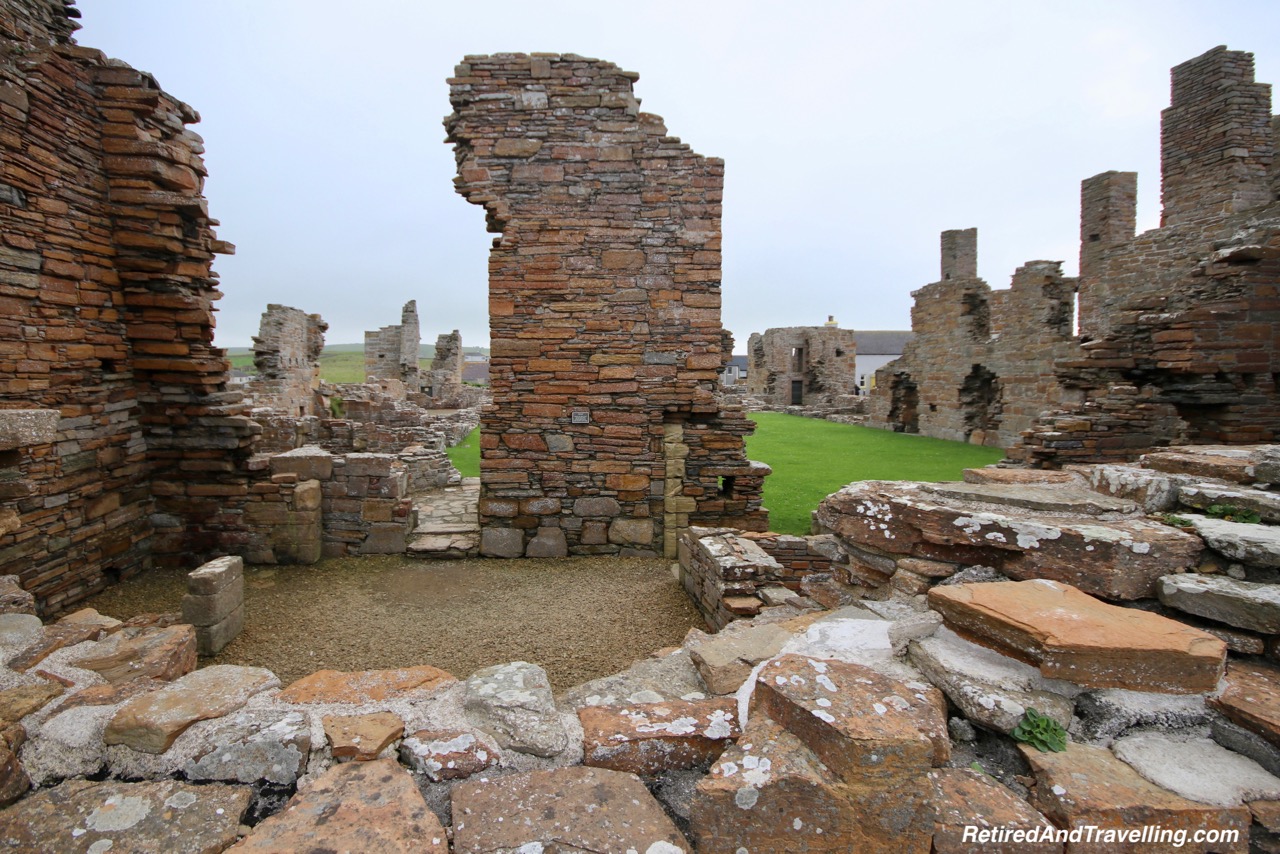 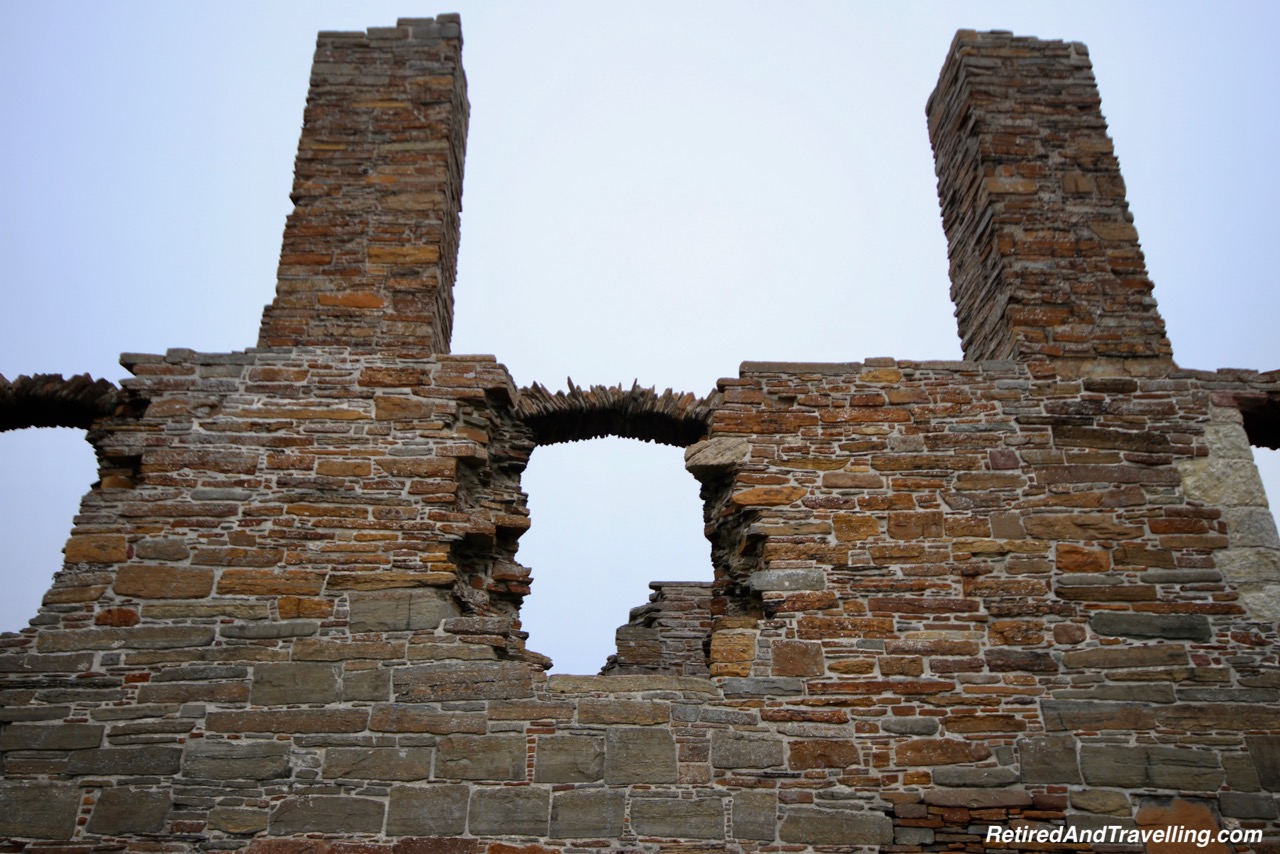 When we finished we looked out over the water. On one side we could just see the Birsay Tidal Island. At high tide it is separated from the mainland. In the other direction we saw the stunning vertical cliffs that we so characteristic of the Orkney Islands. 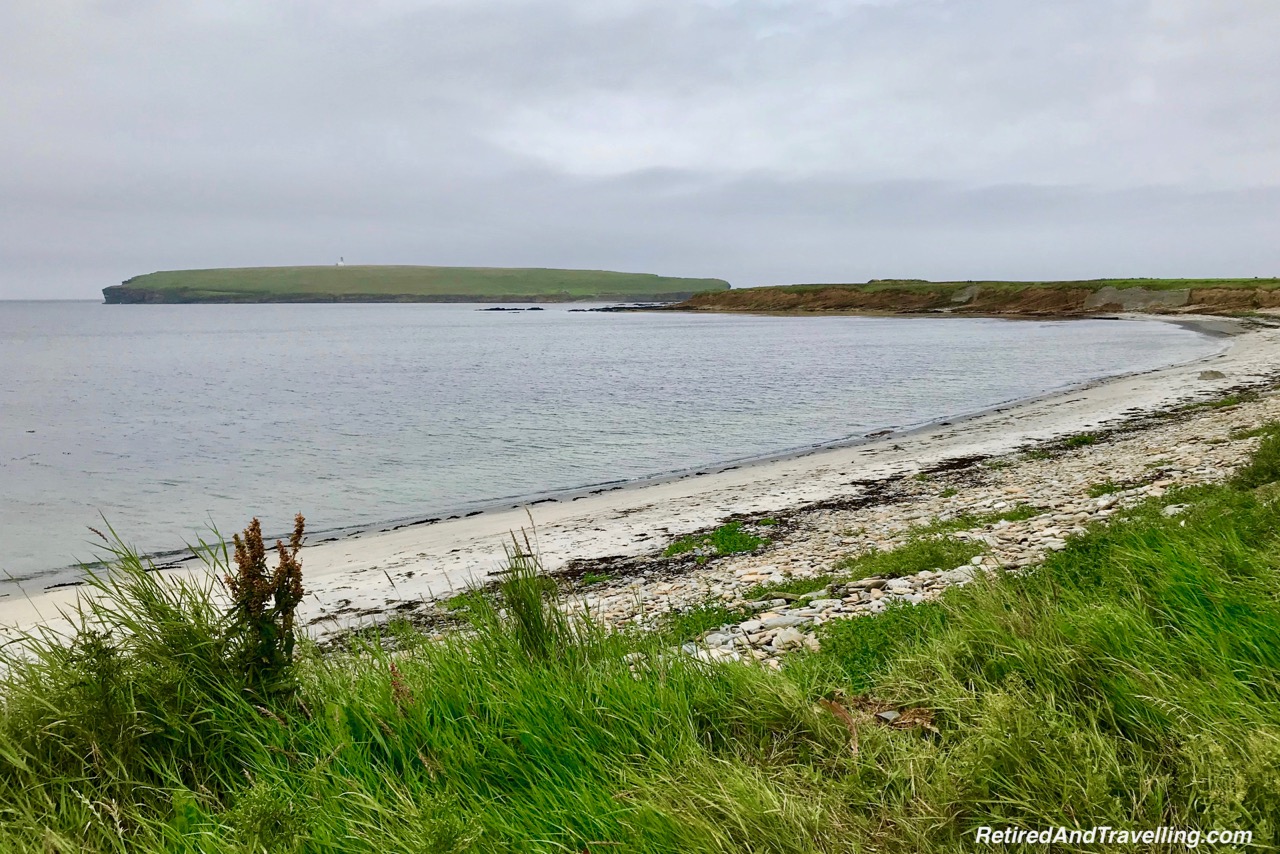 There was a much larger Earl’s Palace in Kirkland. On this fast visit to the Orkney Islands we did not have time to visit. But more ruins awaited us when we visited Grey’s Abbey on our visit to Northern Ireland.

After WWWI, the German naval fleet was interned on the coast of Scapa Flow to await a decision on its future. To avoid the ships being used by the British, the crew scuttled the entire fleet in June 1919. As scuba divers, we were fascinated to learn that this site now contains one of the highest concentrations of diveable wrecks in the world. Although some of the ships have been raised and there there has been much salvaging on others.

On the southern part of the island was the Churchill Barriers. This was originally built from cement blocks to protect the eastern approaches of Scapa Flow following the sinking of HMS Royal Oak in 1939. The roadway has been surfaced and now provided vehicle access to different islands, which were previously connected only by ferry.

On a quick stop in the Orkney Islands, there was so much history to absorb.

An Interesting Quick Stop In The Orkney Islands Scotland

We had a great country break when we did a quick stop in the Orkney Islands Scotland. The countryside and waterways were beautiful in the gloomy mist. We learned so much history about the islands. From the distant Neolithic standing stones, to the royal linkages and through to the World Wars. Local beer and single malt scotch will warm you up when you visit!

We got one more surprise when local girls put on a great Scottish dance show for us on the pier. The welcomes and send-offs were always so touching when we cruised the smaller ports. 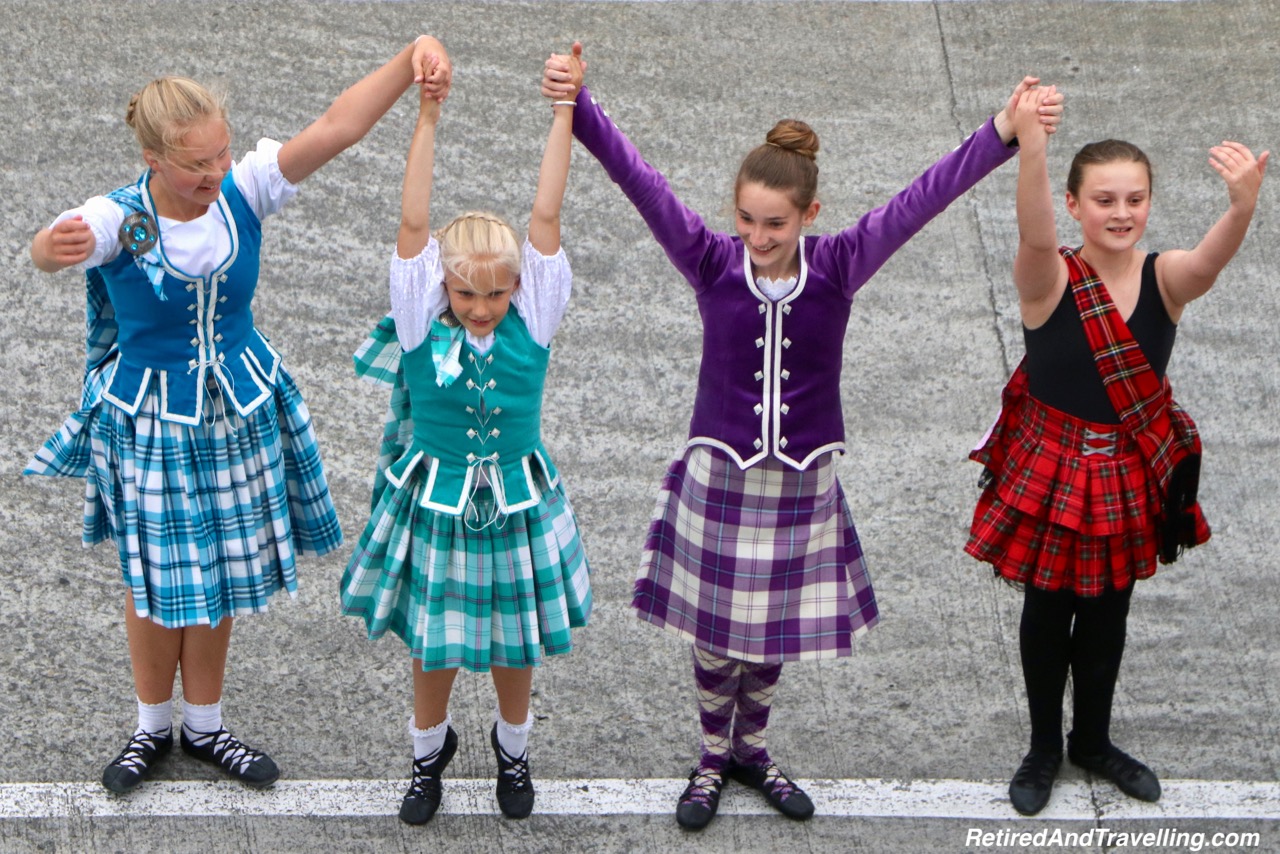 Our short visit to the Orkney Islands Scotland whetted our appetite for our next stop in the Faroe Islands. This stop made us excited to see yet more great countryside vistas on this cruise to the Nordic countries.

Have you done a quick stop in the Orkney Islands Scotland? Did you find something else we missed? 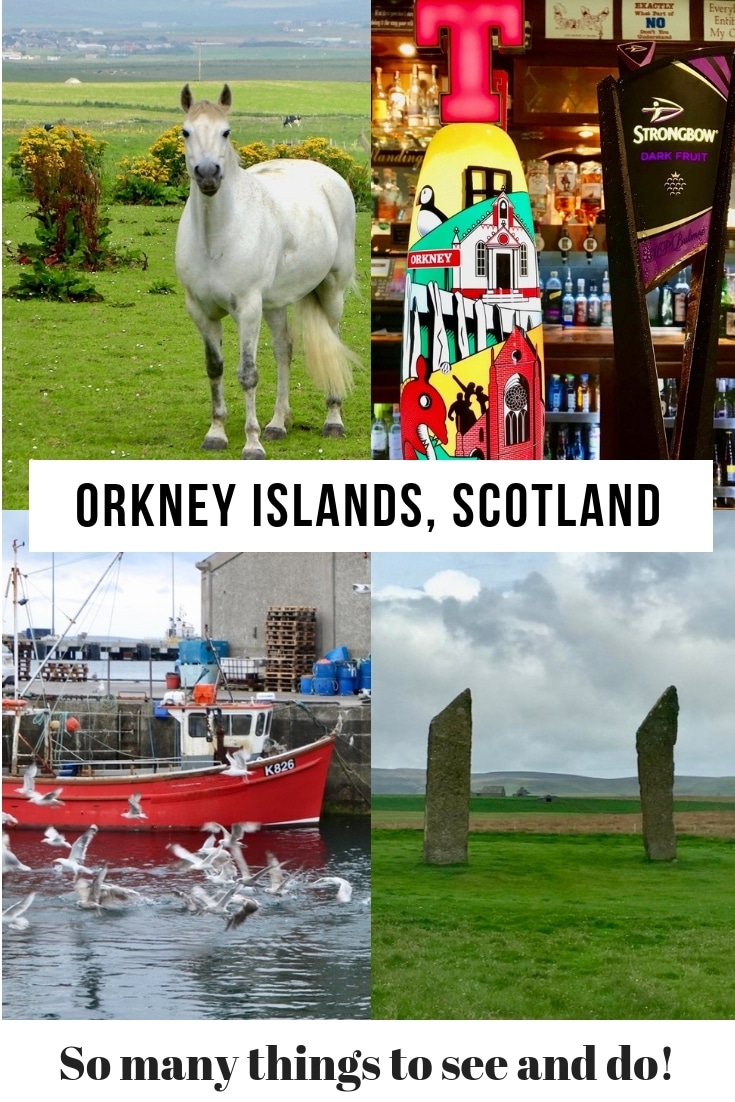