Wandering around Granada, it was easy to see the influence the Moors had on architecture. The buildings were graced with intricate beauty. We had caught glimpses of awesome Alhambra from afar and this would be our day to explore it in detail. 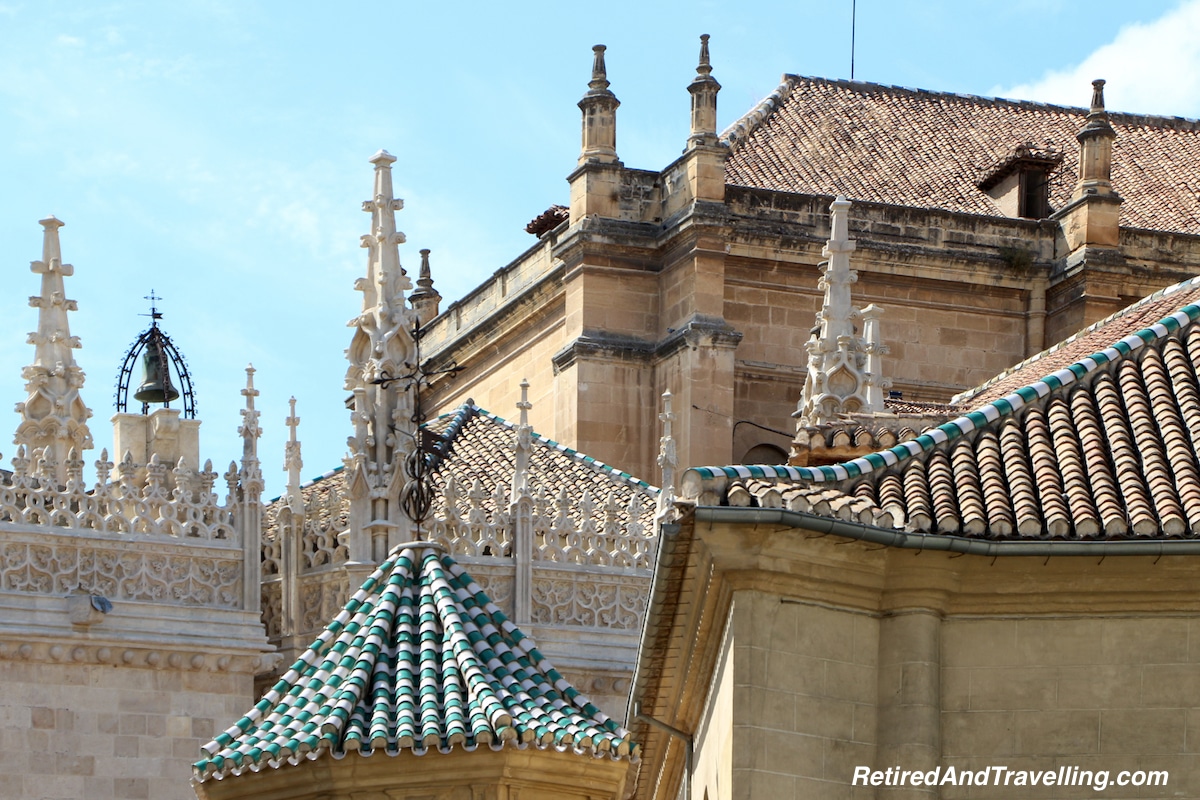 We were headed to Alhambra at the time we had booked with our Granada Pass. The mini bus dropped us at the entry point. Opting to skip the Generalife half of Alhambra, we leisurely strolled through the grounds leading to the palace. The Moorish baths were interesting and the gardens were still in bloom. Beyond the palace we climbed the ramparts ever higher. The last few steps were hard but we were rewarded with a great view of the city. We quickly tried to benchmark our hotel and the St Nicolas Square directly across from us. 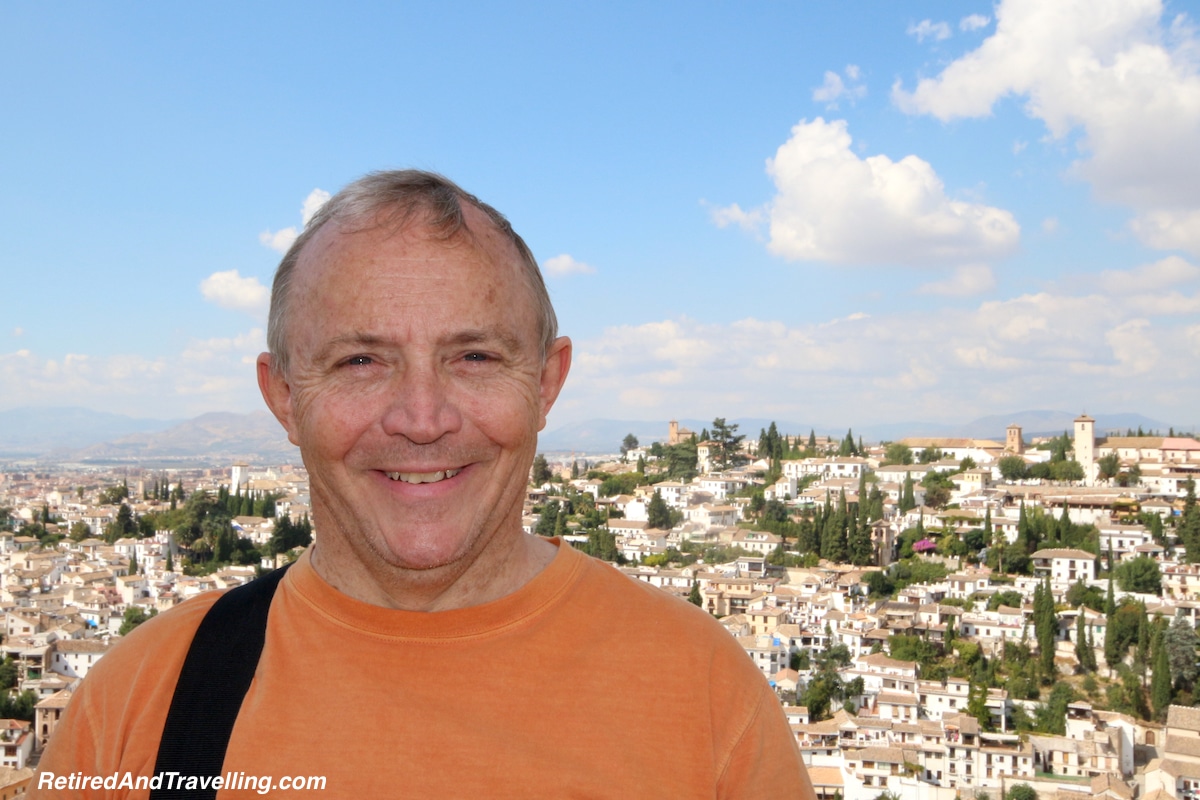 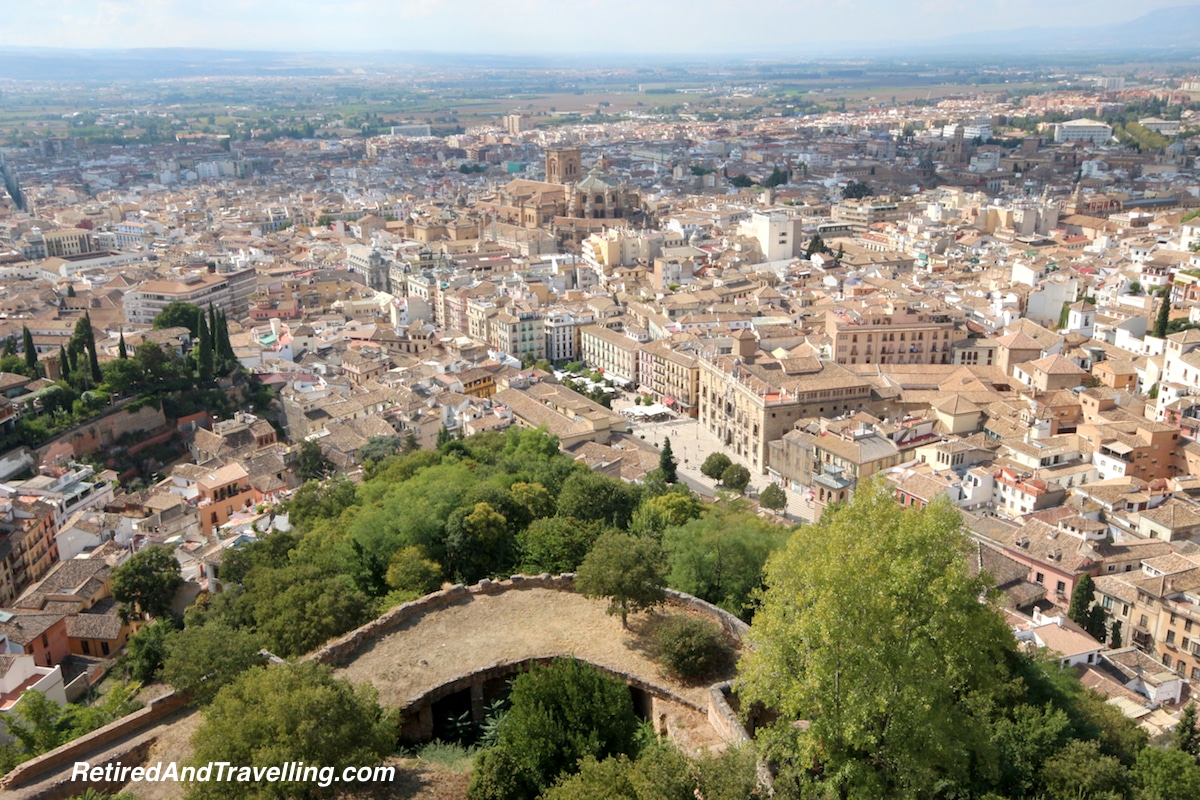 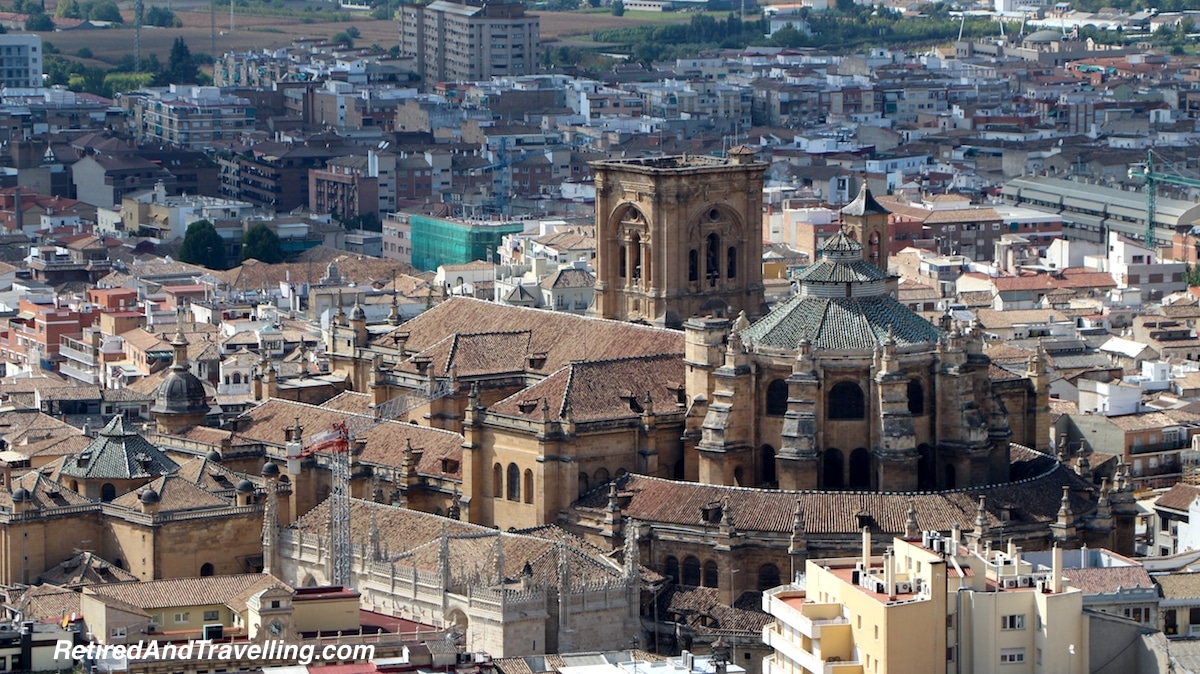 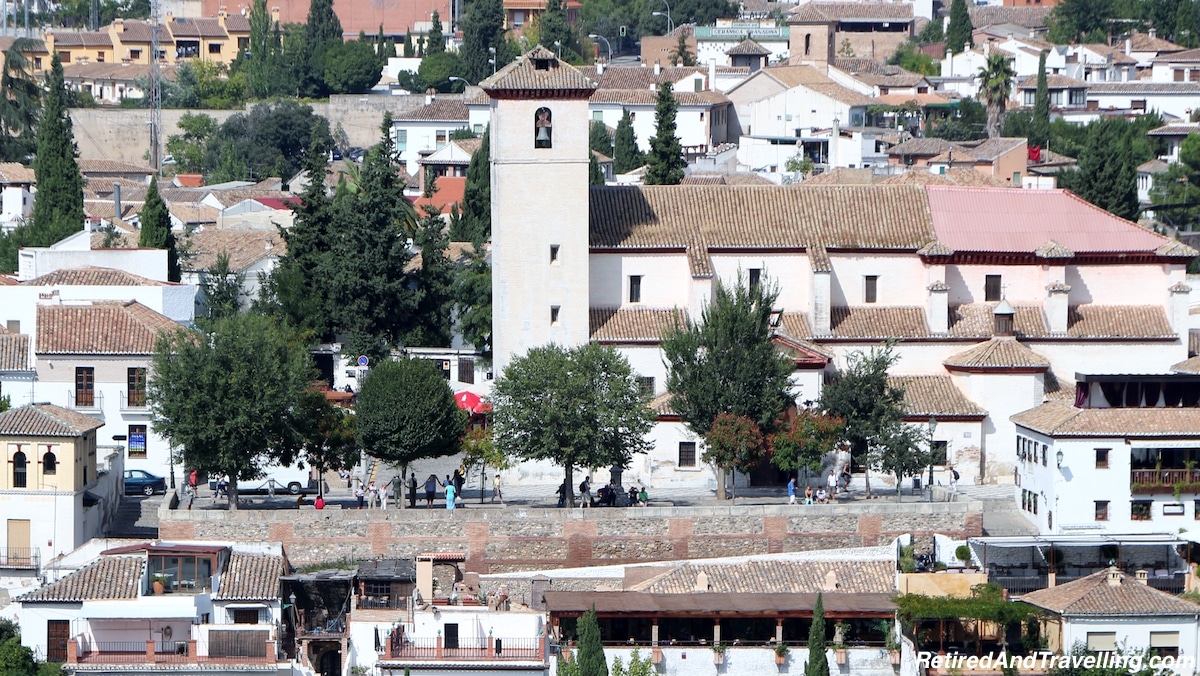 It was a truly great view and worth the climb, even if our legs did protest all the next day. We headed back down the narrow tower stairs, almost more narrow than me in places. 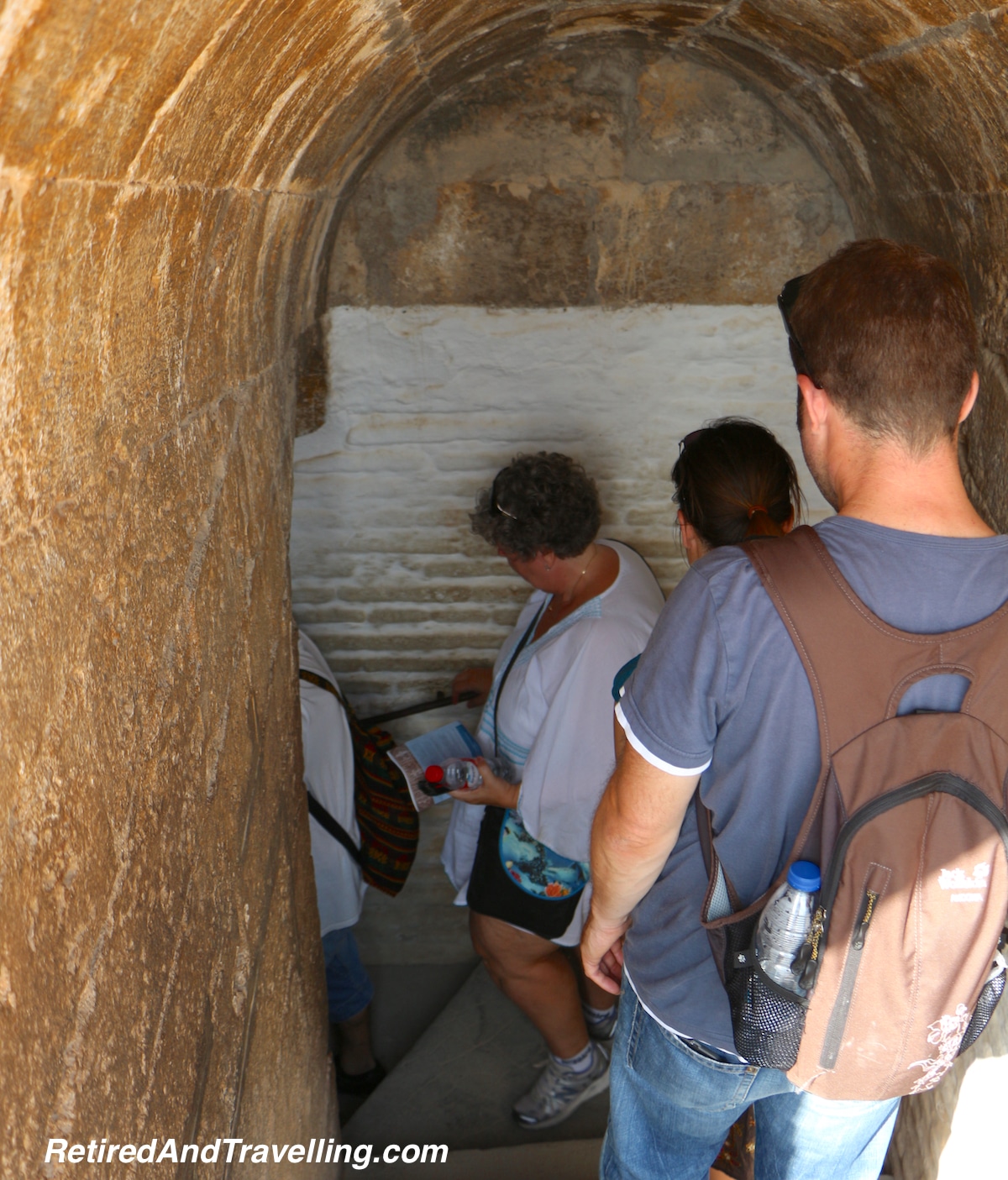 David let me rest in the shade before we entered the Nasrid palace. Upon entry, we saw the wondrous carvings, stone on the walls and wood on the ceilings. David wondered what messages he was recording. Our eyes swivelled from side to side as we tried to capture the intricacies of awesome Alhambra. 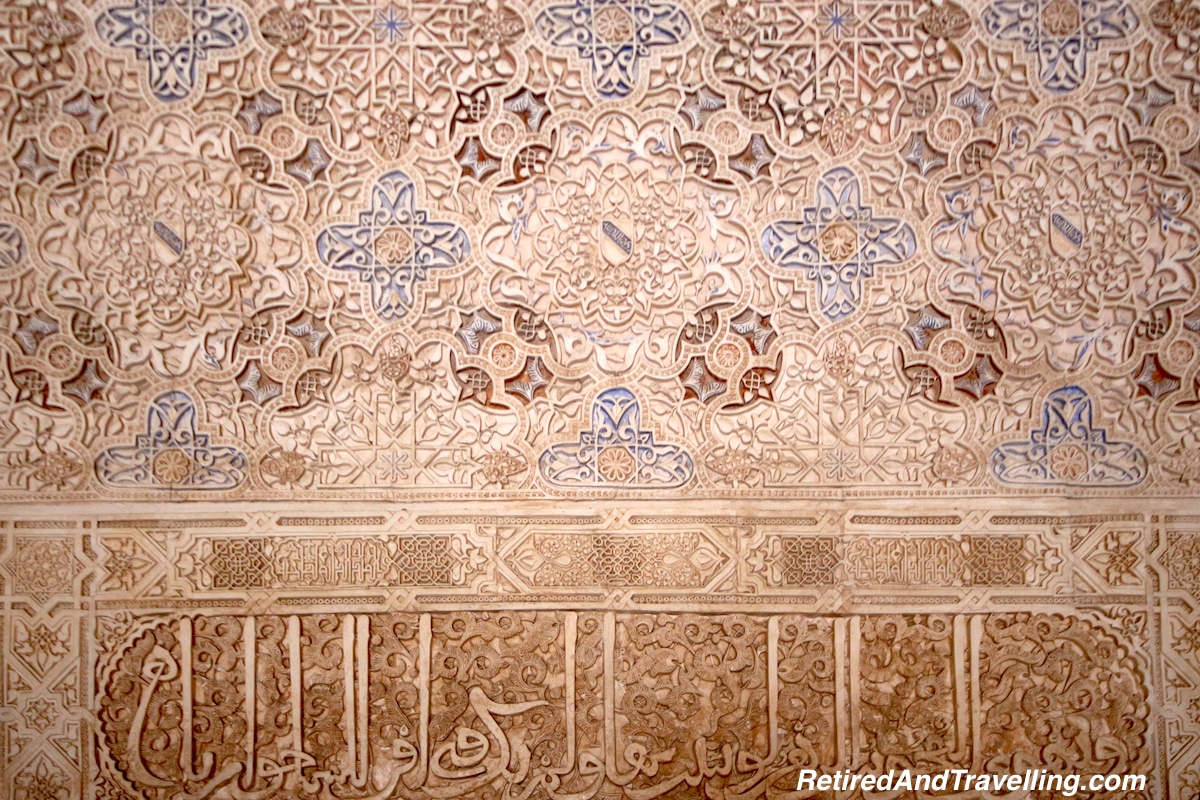 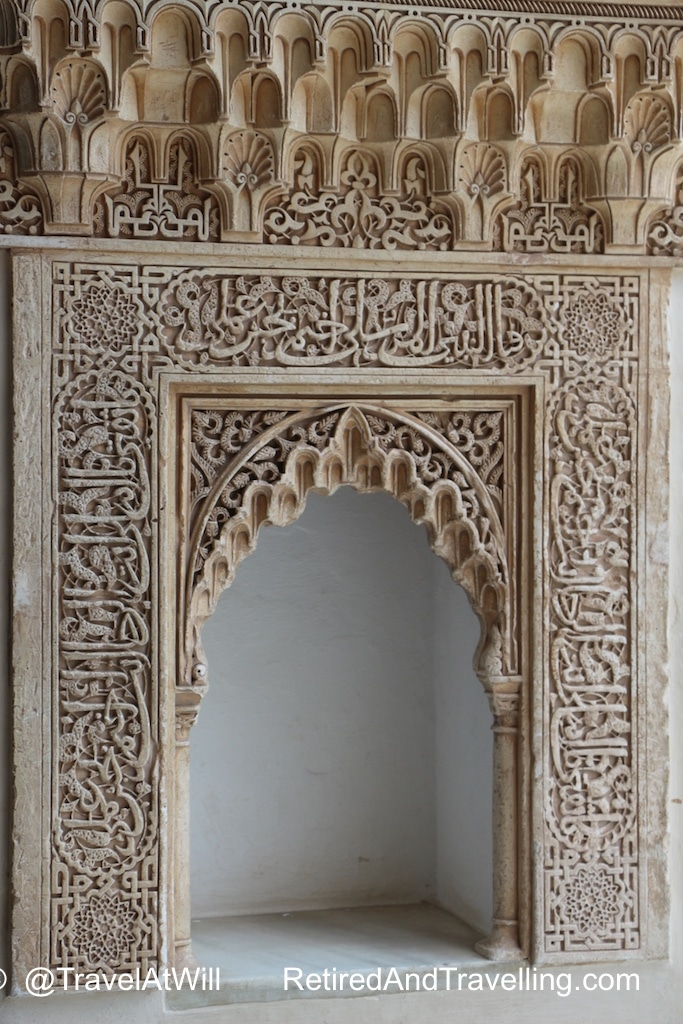 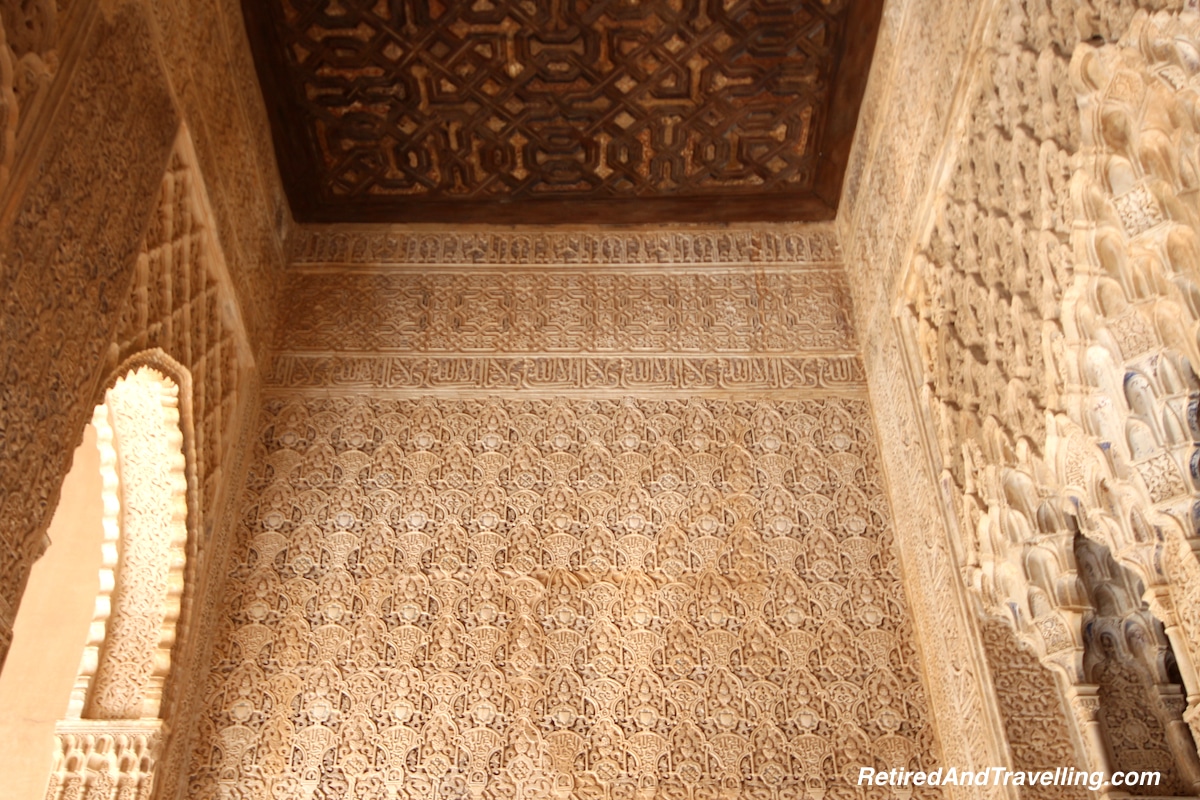 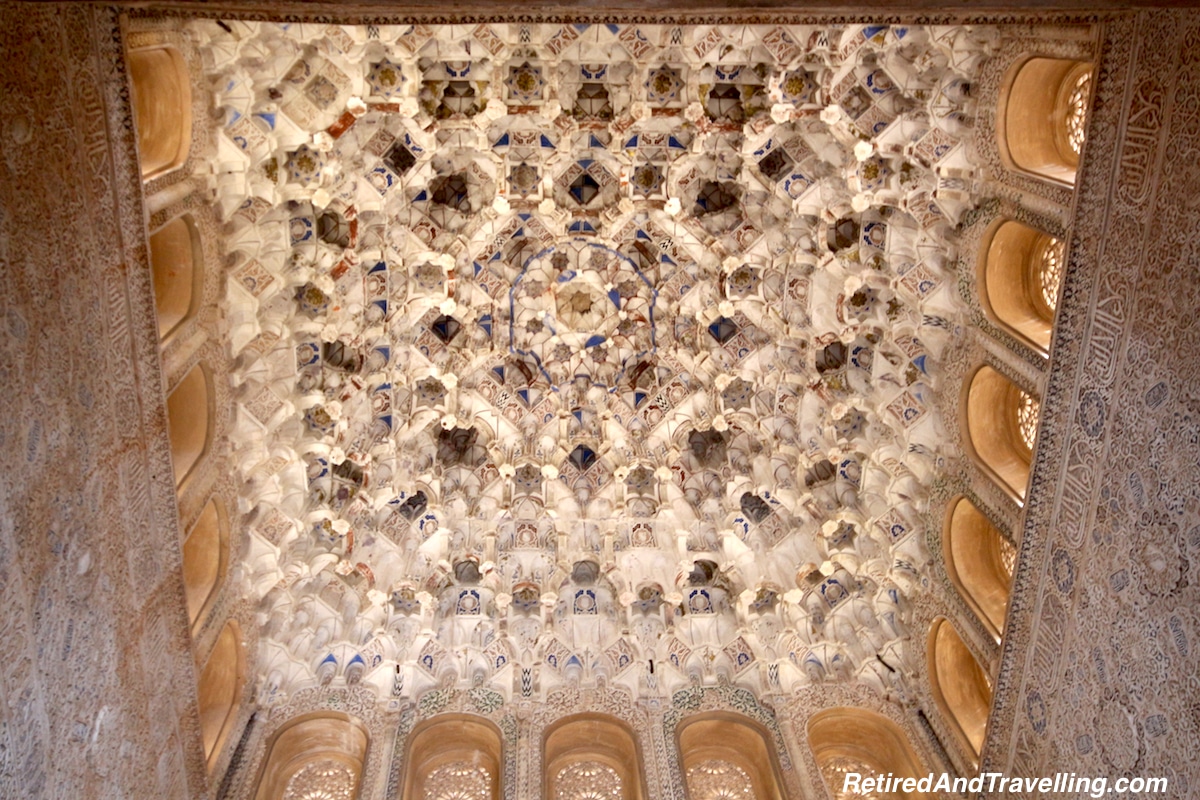 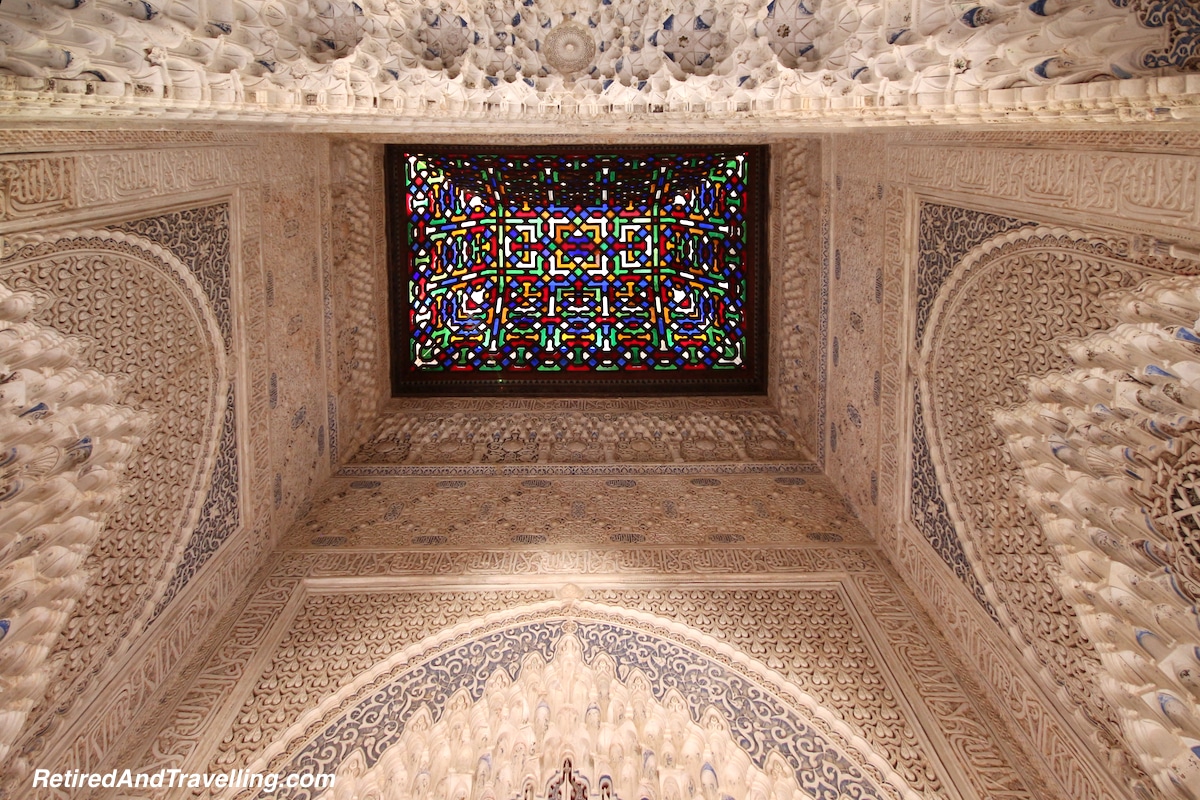 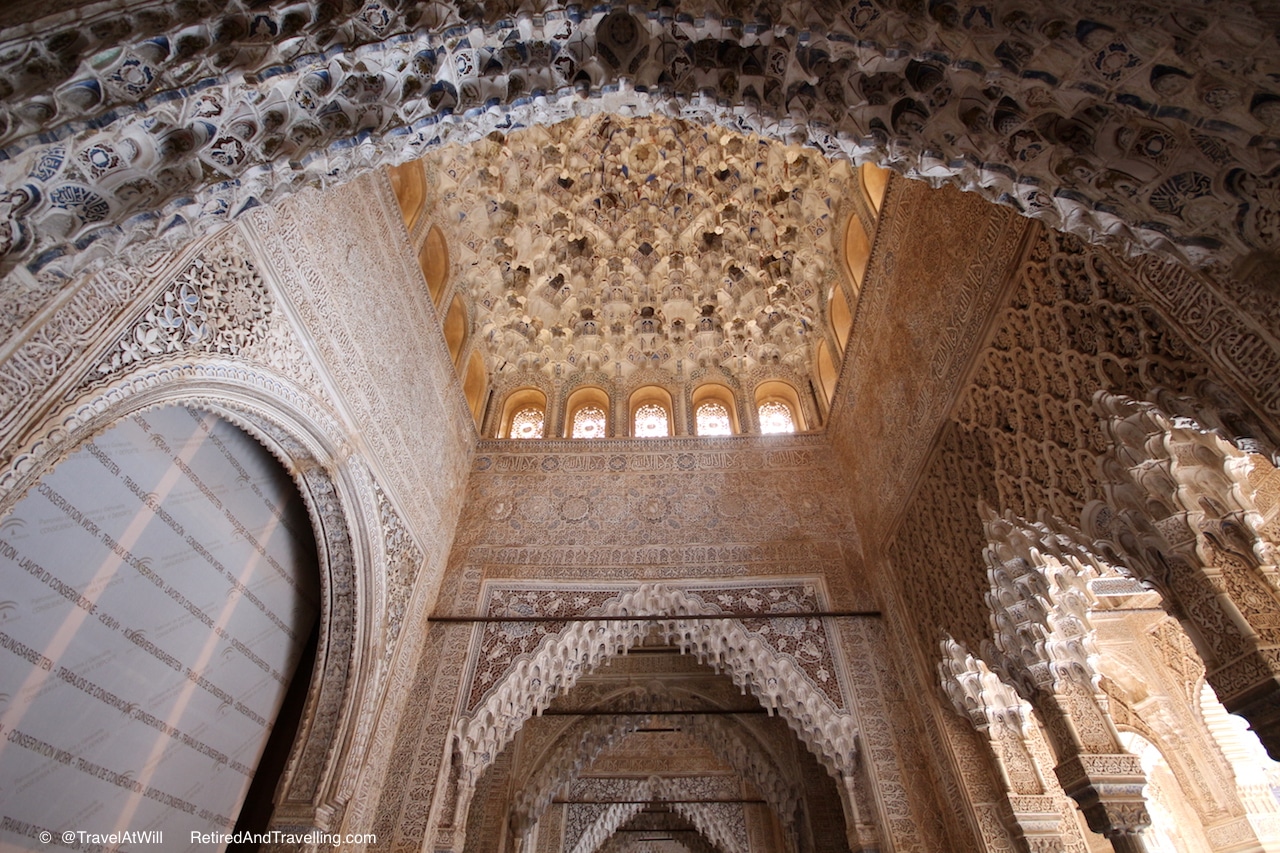 The stone was carved in intricate detail, resembling stone lace. We moved from room to room, looking in nooks and crannies and out window portals. The inner courtyards were gardens or water pools. 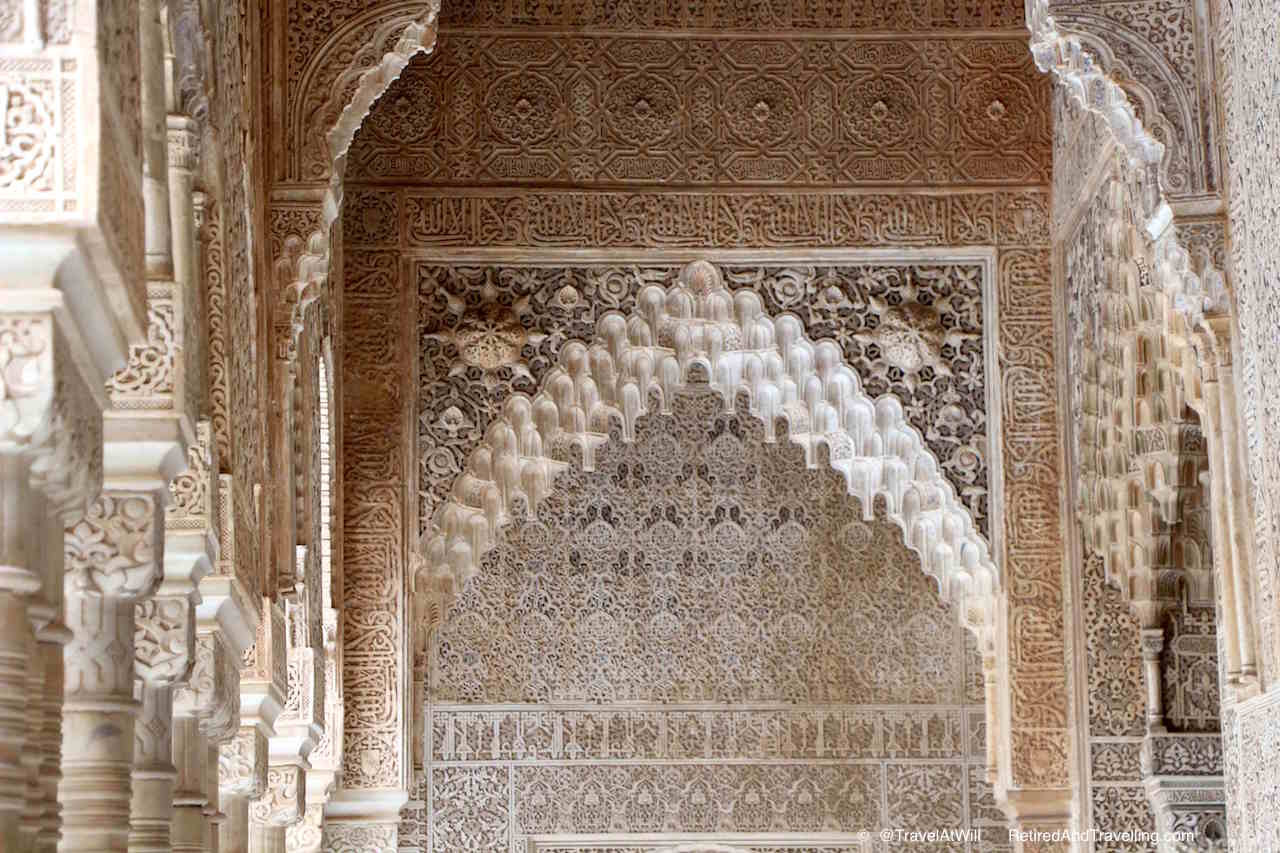 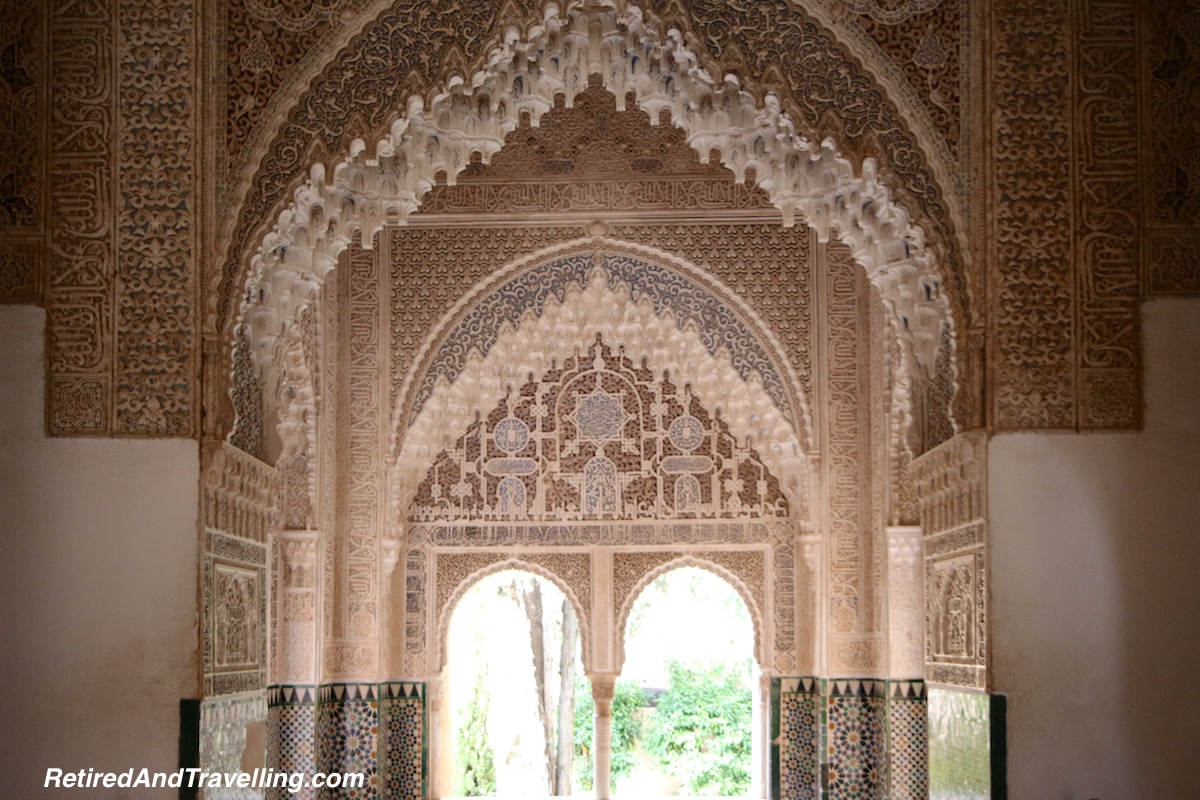 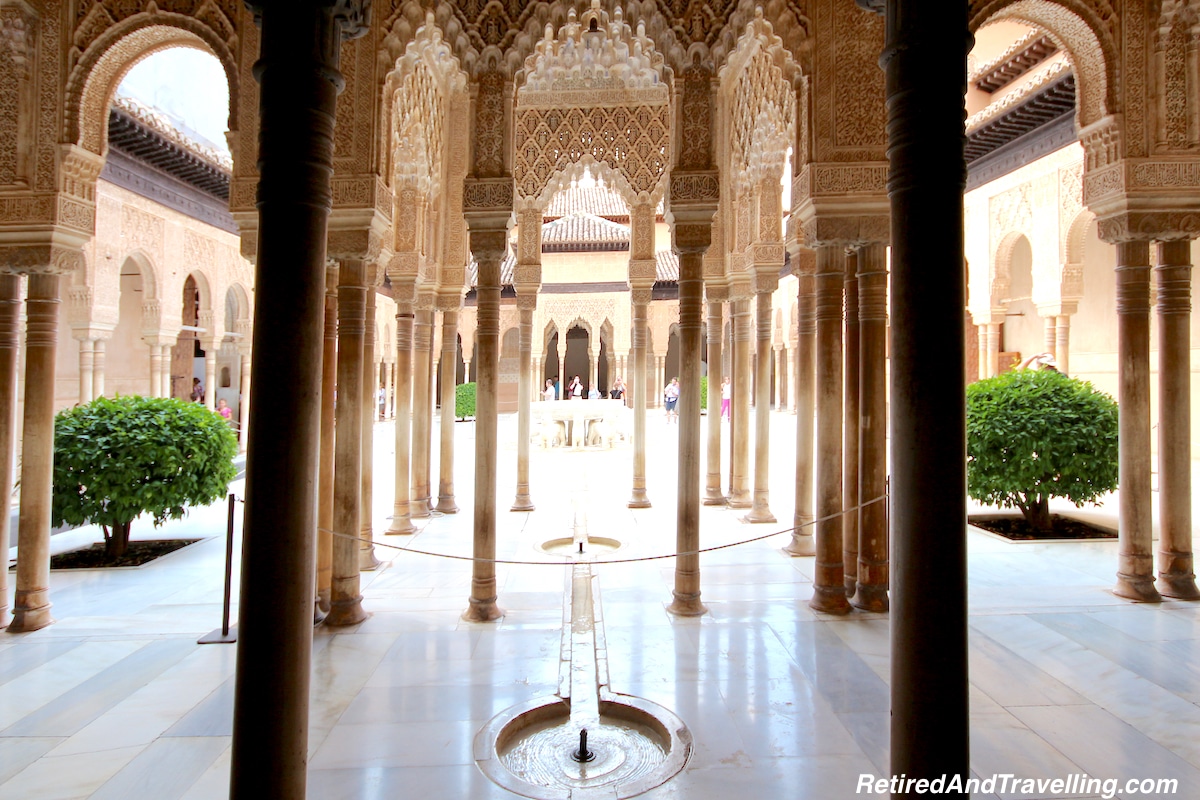 Up and down and up again we moved thru the 3 different palaces until we finally called uncle and moved at an undeterred pace. While having an audio or personal guide would have provided much more context, it would have extended our visit far past what our backs or legs could stand. Maybe next time, with the overview already done.

Exiting the palace we followed “out” signs. The gardens and ponds were still alive, offering rest spots to recover. I briefly toyed with climbing up to the Generalife or the White Palace but I knew that was a pipe dream – for both of us. While David was in better shape than me, the churros we had eaten 5 hours before were long gone and food was a higher priority. 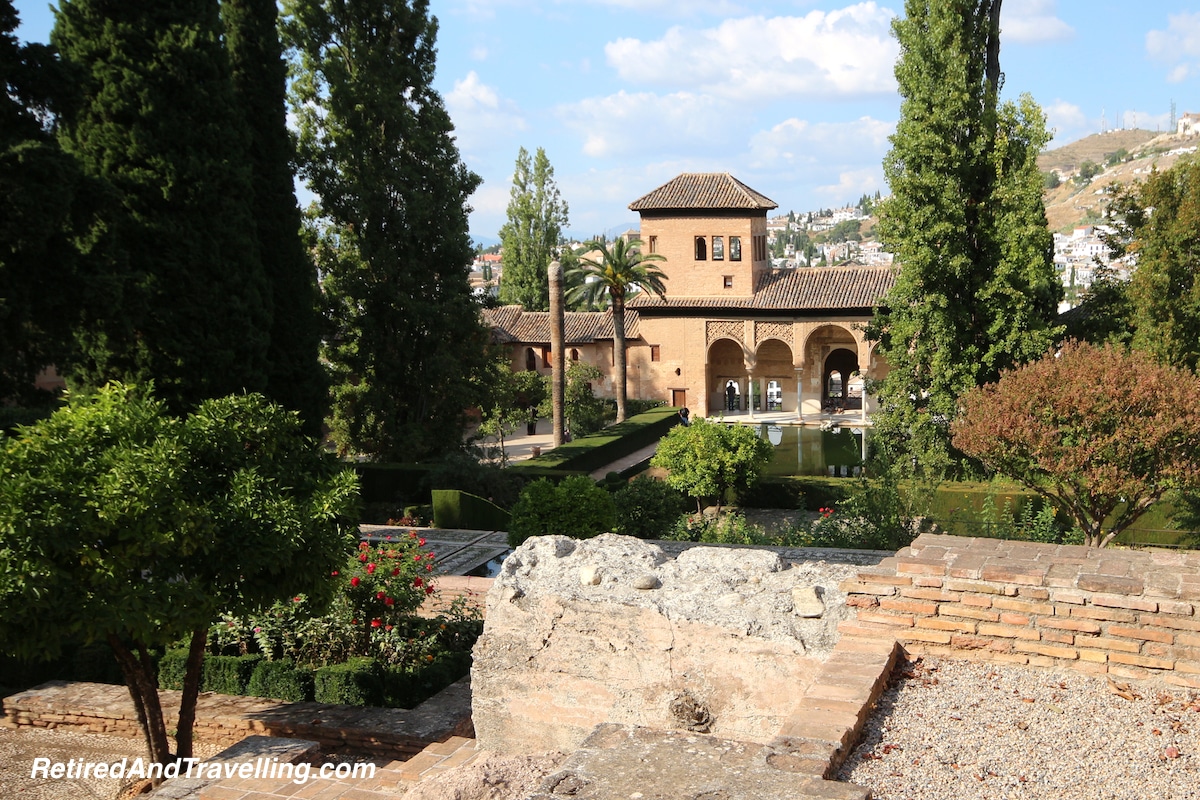 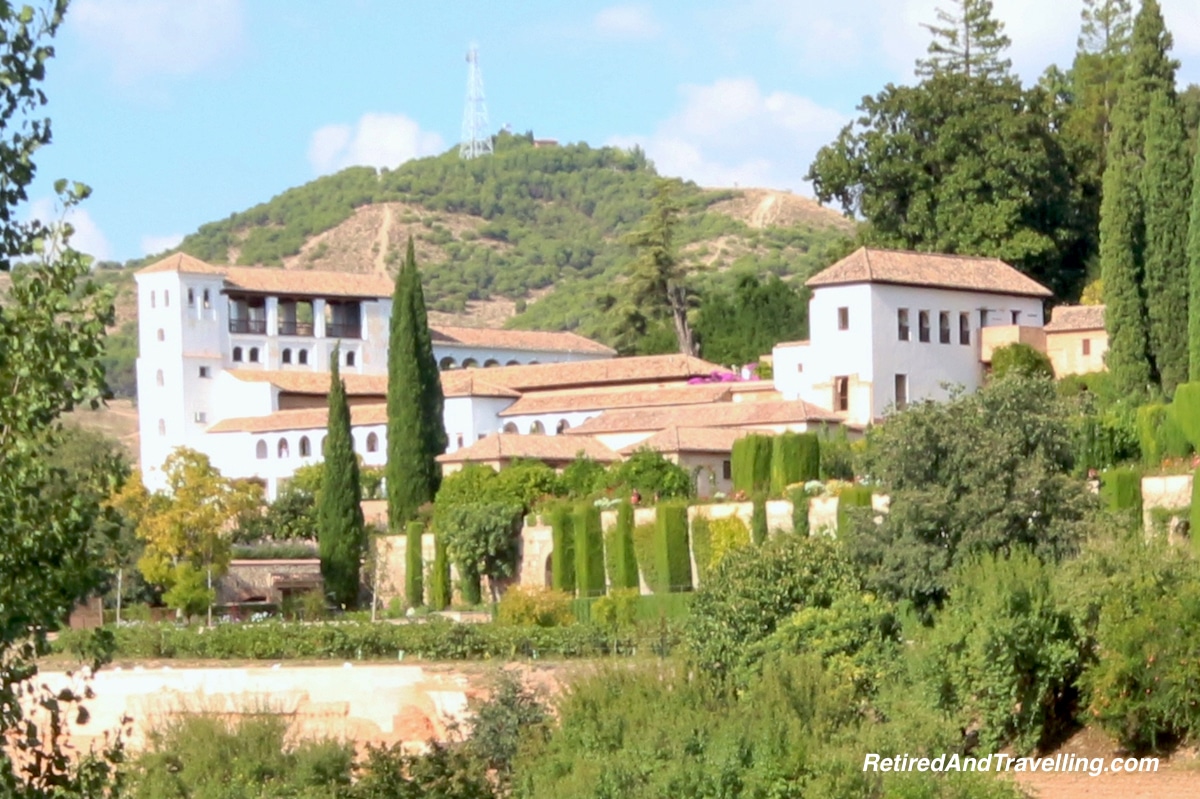 Our Last View of Alhambra

Finally back in our room that night, we waited until sunset. It truly was an awesome Alhambra sight! It would act as a tease to draw us back! 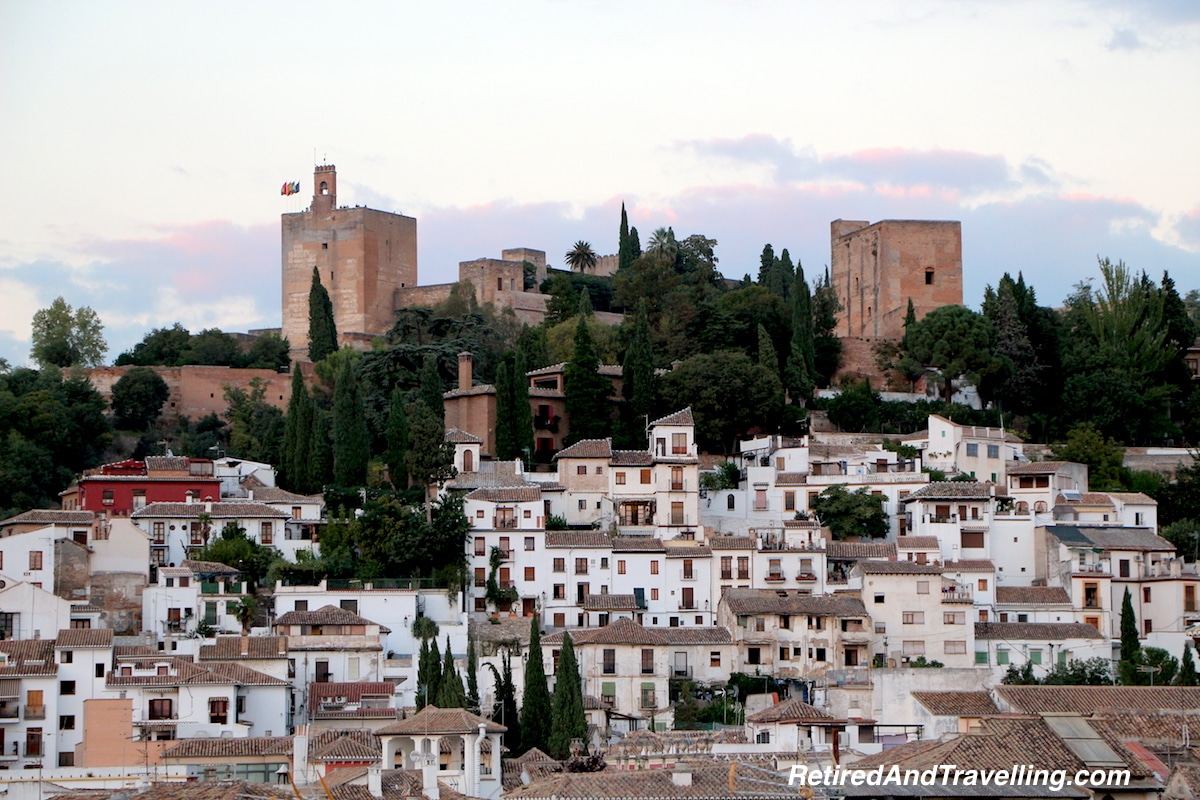 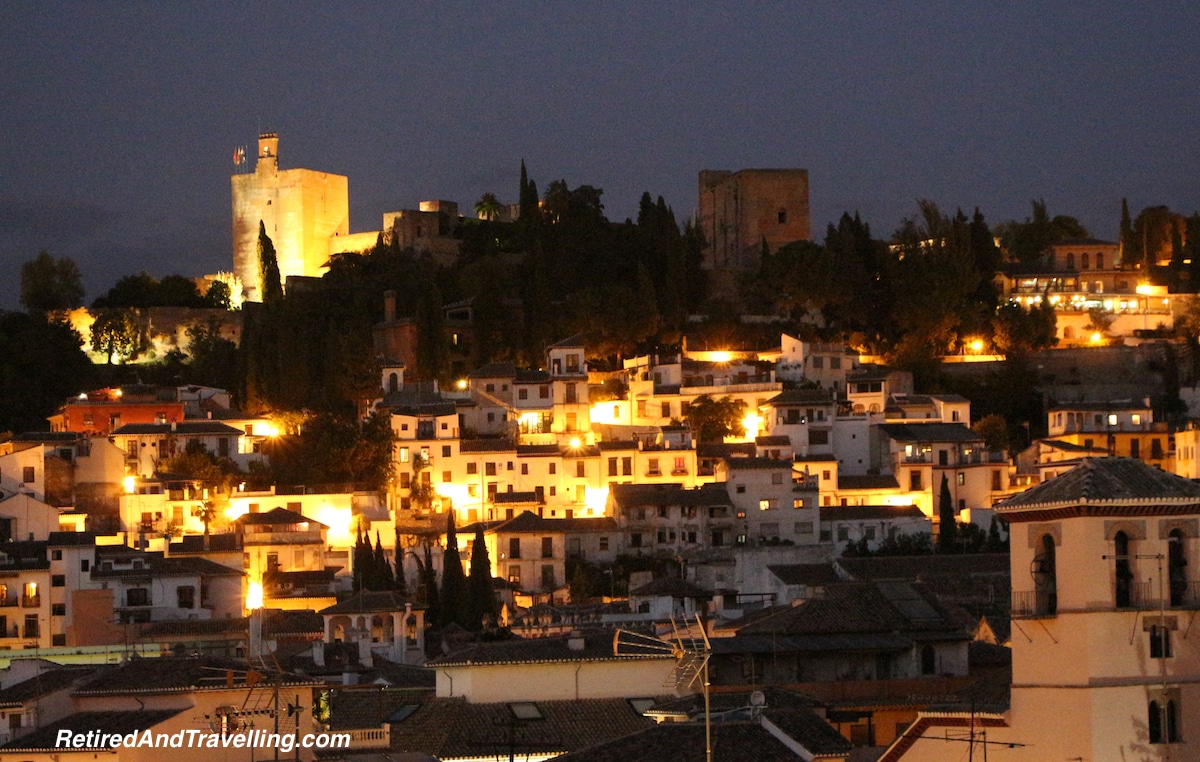 We were so glad we had added a stop in Granada to our Spain itinerary. It would have been such a shame to have missed awesome Alhambra. We had not seen it all but we knew that Granada would be on our plans again.

Have you visited awesome Alhambra? Did you make it through all of Alhambra? What should be on our “don’t miss” list for next time? 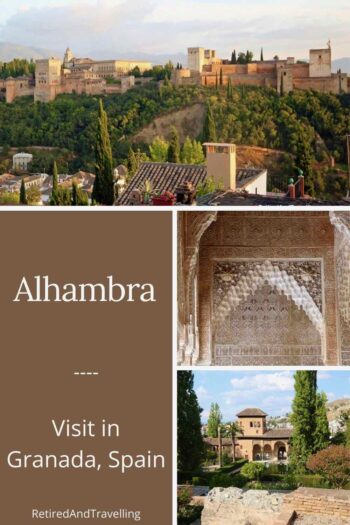 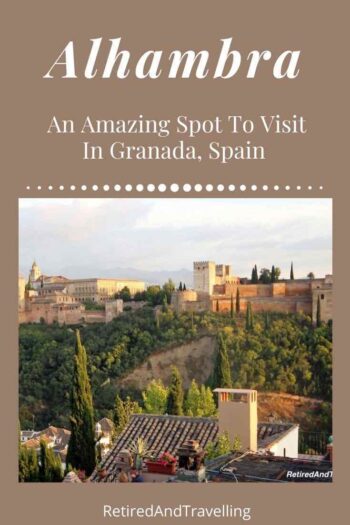 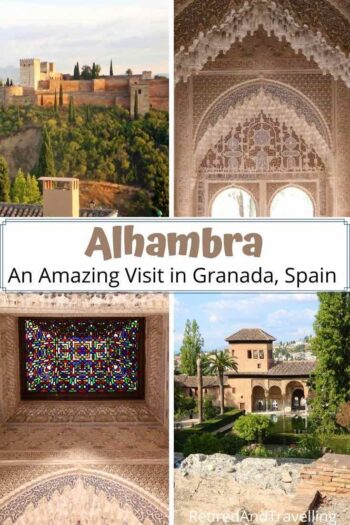