We Started Our California Cruise In Long Beach

We headed south to cruise from Long Beach in the holiday season. It was a short 7 day cruise along the California coast. With one stop south in sunny and hot Mexico.

When we planned our California cruise, we debated a few options on where to stay when we arrived. On previous visits to Los Angeles we stayed out of the city in Santa Monica and Newport Beach. We considered staying right in the city of Los Angeles. But finally decided to stay closer to the cruise port in Long Beach.

We always travelled a few days before we departed on a cruise. Travel in the winter added unpredictability. We liked to adjust to local time. And we often just wanted to enjoy a few days in a port city before we departed. On our cruise from Long Beach in the holiday season, we were happy we stayed in Long Beach. There were some interesting things to see and do. Even if the weather did not always cooperate.

Leaving Toronto In The Snow

It was an early start to winter in Toronto. A big storm hit the day before we were scheduled to leave for our cruise with Oceania Cruises.  We were off for wine tasting along the California Coast. With our Nexus passes in hand and an 8am departure, we planned to arrive at the airport at 6am. But we totally mis-judged how badly backed up the airport was from the storm.

We were still dealing with the fallout from Air Canada making major changes to their computer systems. And were unable to check-in online. When we arrived at the airport, we were not happy to find that David had been selected for a “special” screening process. This explained why we could not check in online. And added more than 30 minutes to his security line time.

There were many people delayed in security and our plane was held for 30 minutes. But when even a 30 minute wait did not get everyone onboard, there was a further delay to remove baggage. Luckily the de-icing line up was small. So we only departed Toronto an hour late. 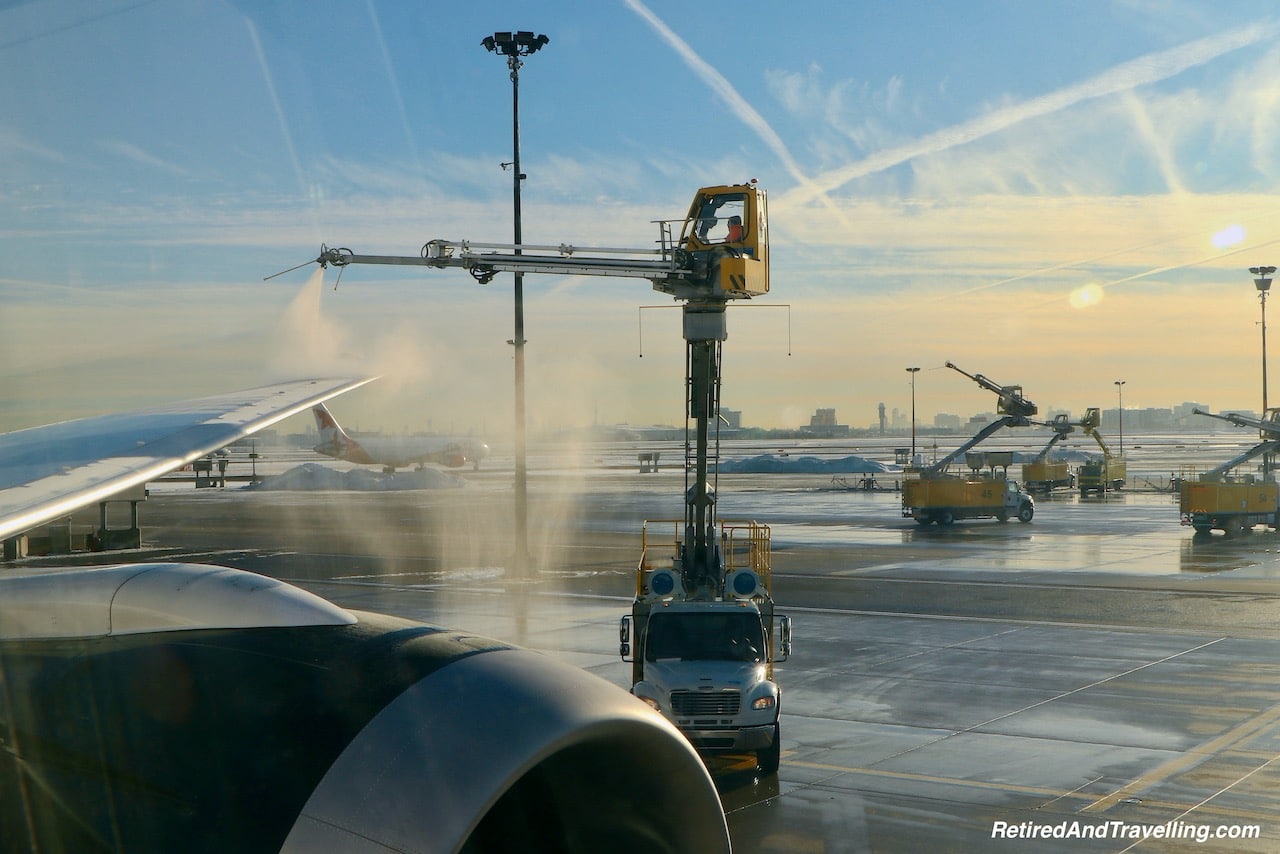 We flew out over snow-covered lands and headed away to cruise from Long Beach in the holiday season. Very glad to get a brief respite from the winter weather. 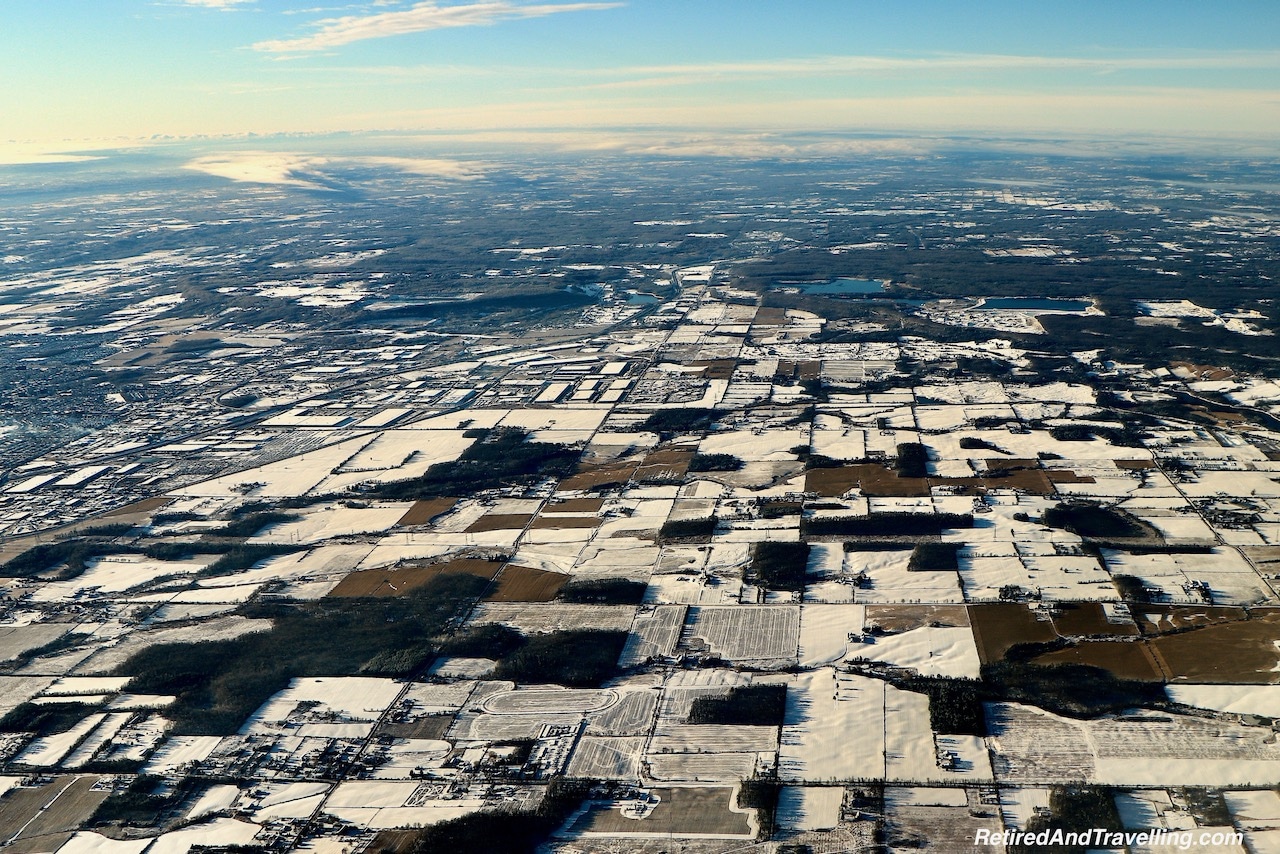 Packing for this trip had been a bit of a challenge. We started in winter weather, enjoyed fall temperatures along the California coast and then finished our trip in cold and wet Vancouver. It was a good thing we checked bags!

As the song rang in my head (“it never rains in Southern California”), we were not really surprised when we found it raining when we landed at LAX in Los Angeles. For years California was plagued with drought. But this year it seemed that it rained a lot. When we did our road trip in California at the beginning of the year, it rained in many of the places we visited.

Over the course of 6 days in Long Beach, we had rain on every day but one. On the one sunny day, we wandered down to the outdoor pool at the Renaissance Long Beach Hotel. But we were not tempted to get in. 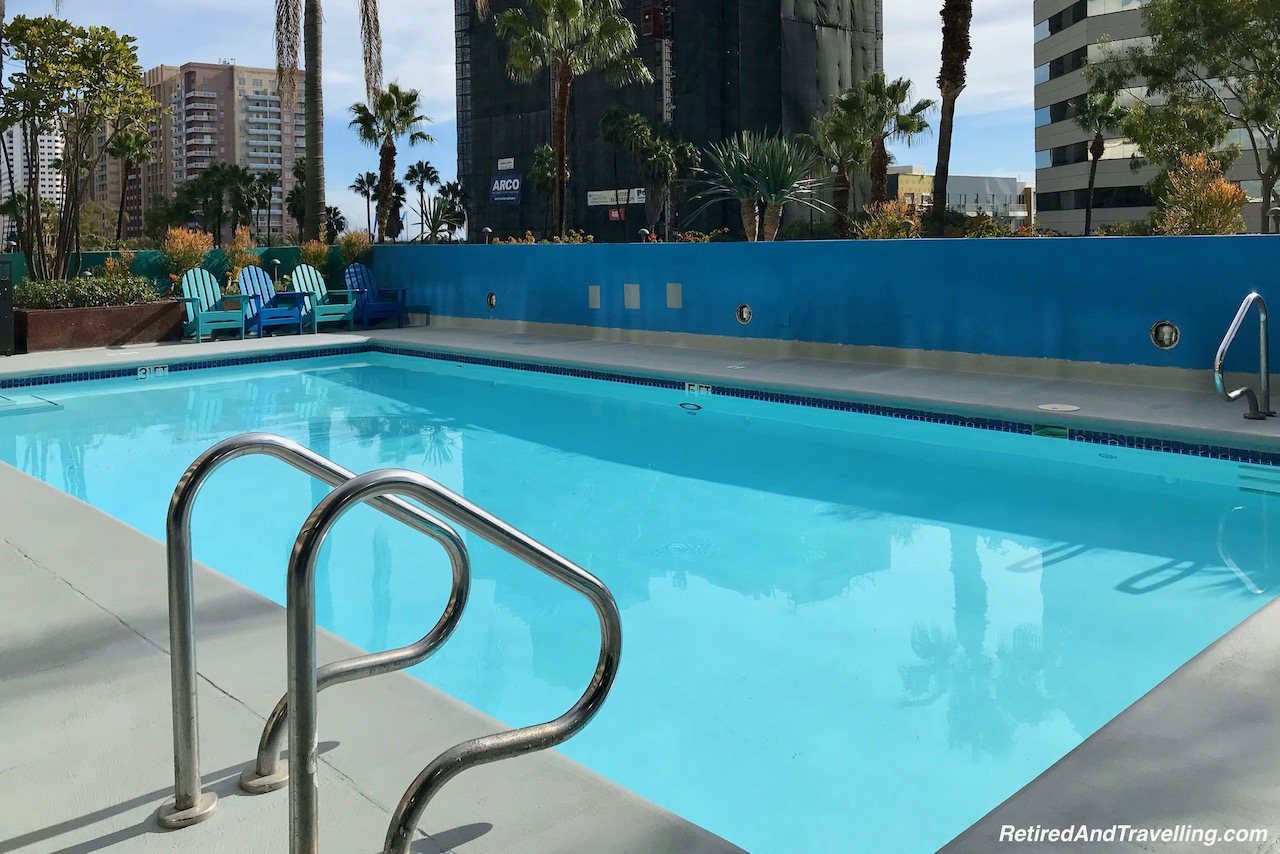 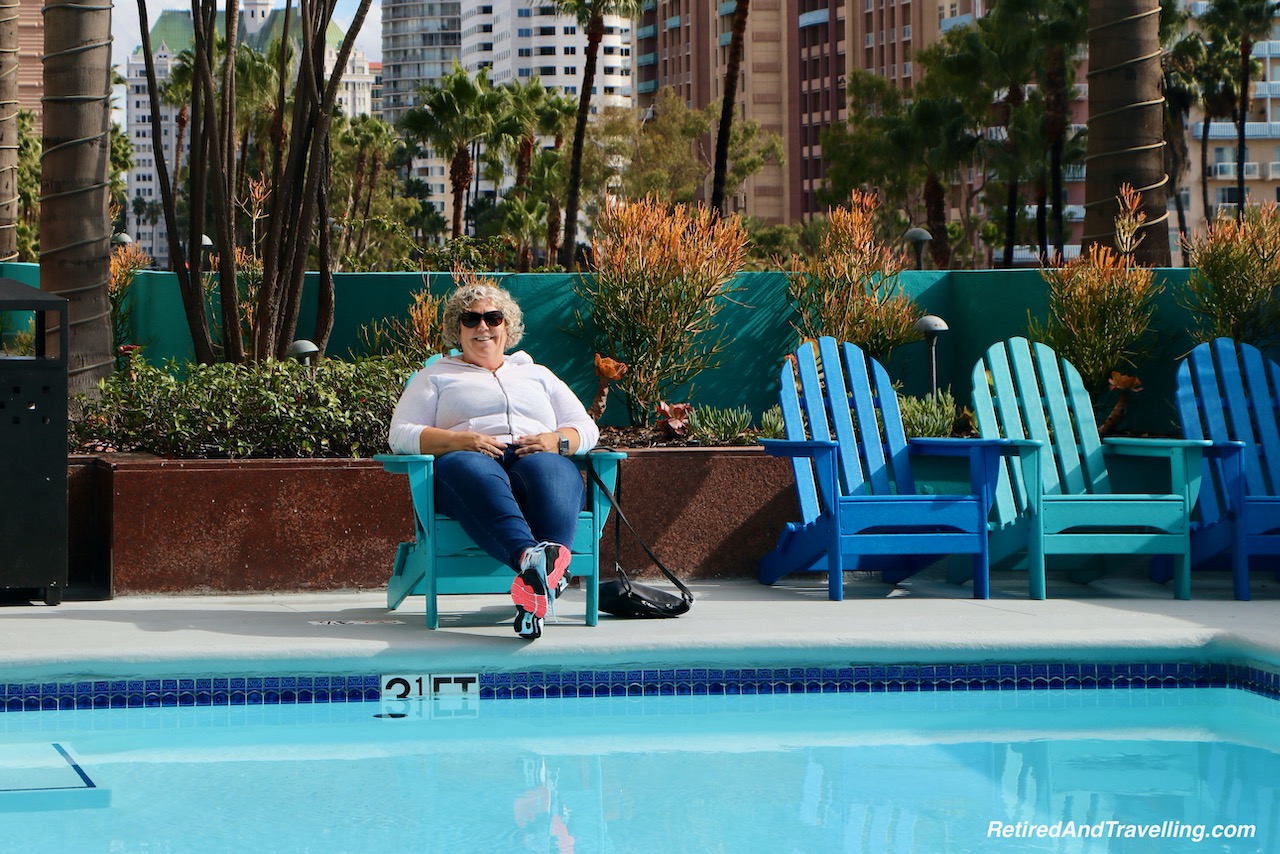 We still figured that rain was better than snow! And the long range forecast for our cruise from Long Beach looked to be improving.

Our hotel was centrally located in Long Beach on Ocean Boulevard. It was an easy walk from there to the Pike Market. While this was billed as an outlet market, there were only a few shops and the prices did not seem to be a bargain. The mall was the first thing we saw all decorated for the holiday season. 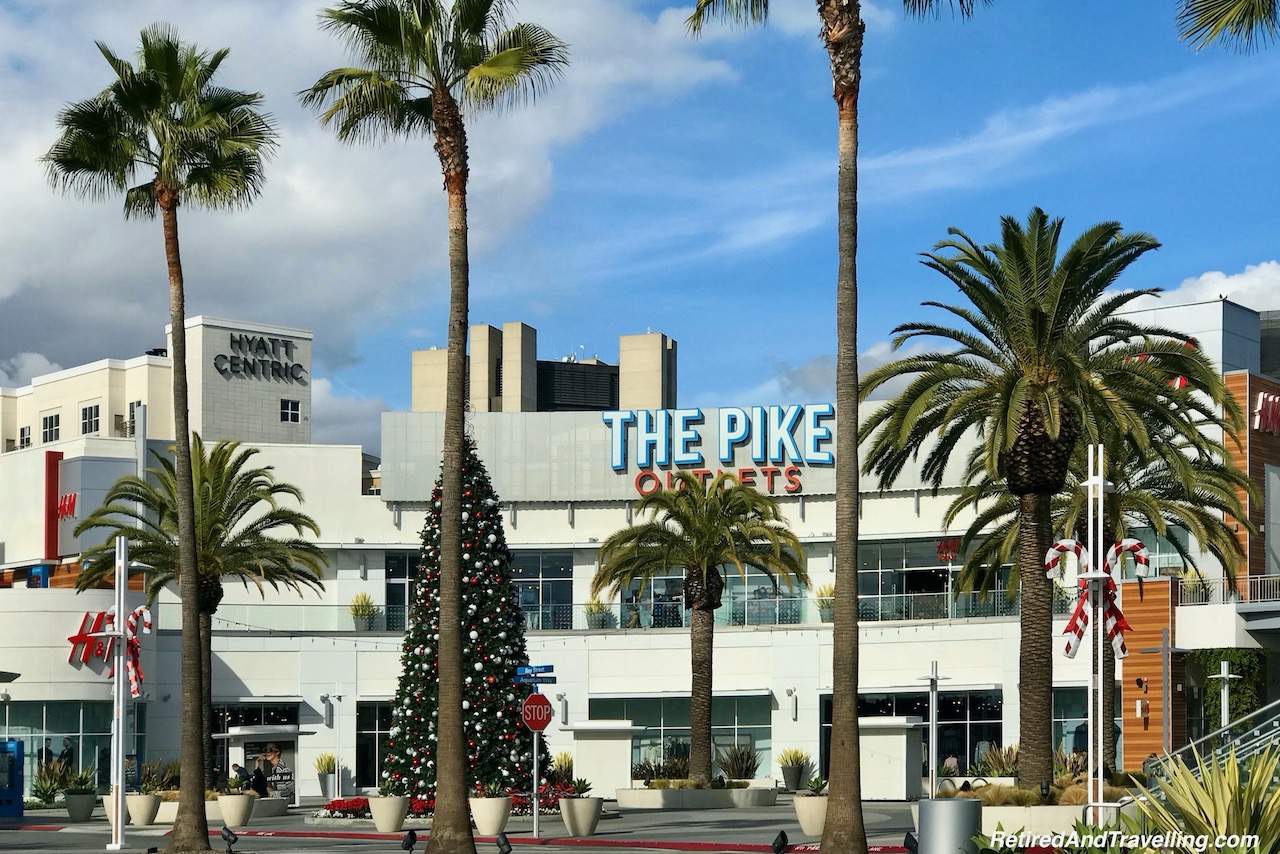 Beside the mall was a 9 storey high ferris wheel. At night we saw it lit up from our hotel room. It did not run while we were at the harbourfront. 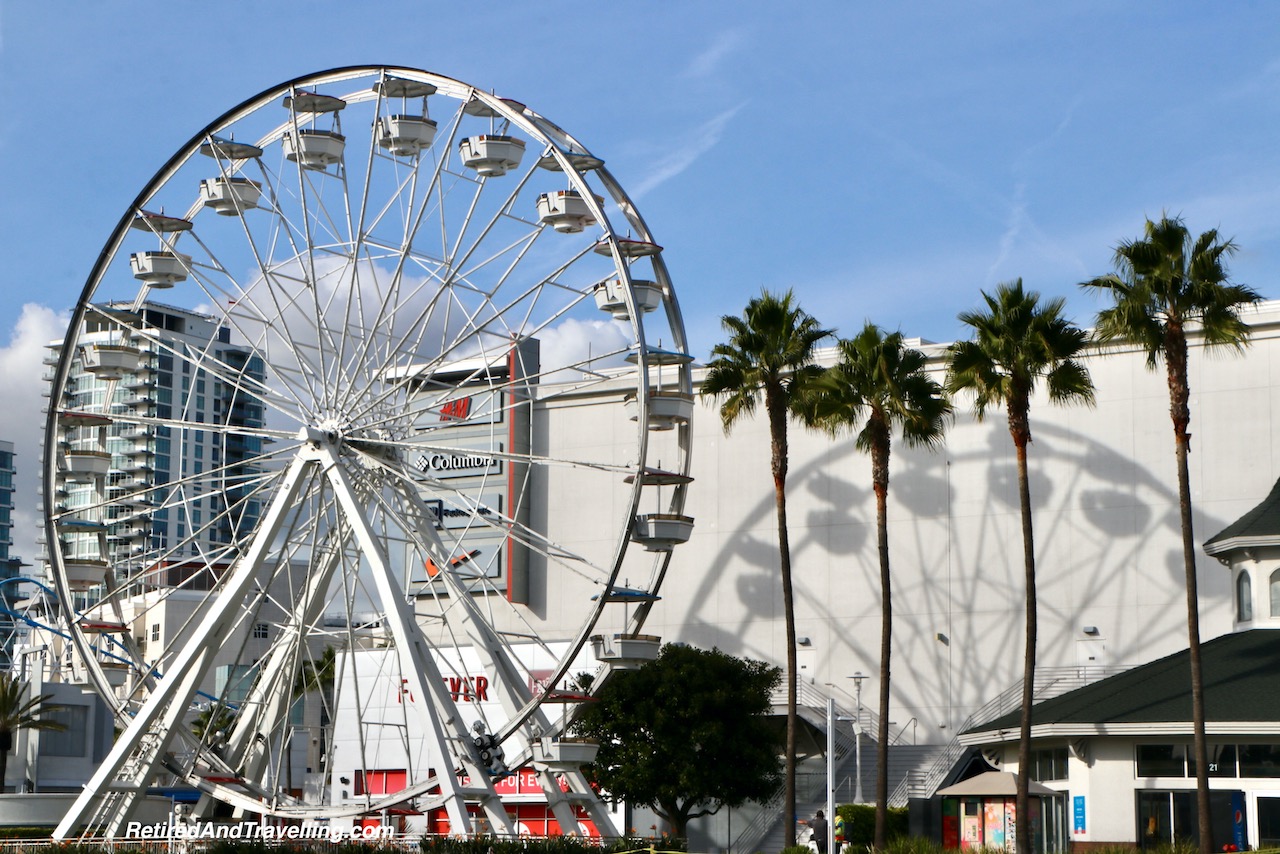 From there we walked down to Rainbow Harbour. There was a light house on the breakwater. The inner harbour was filled with shops and restaurants. And the Parker’s Lighthouse Restaurant. 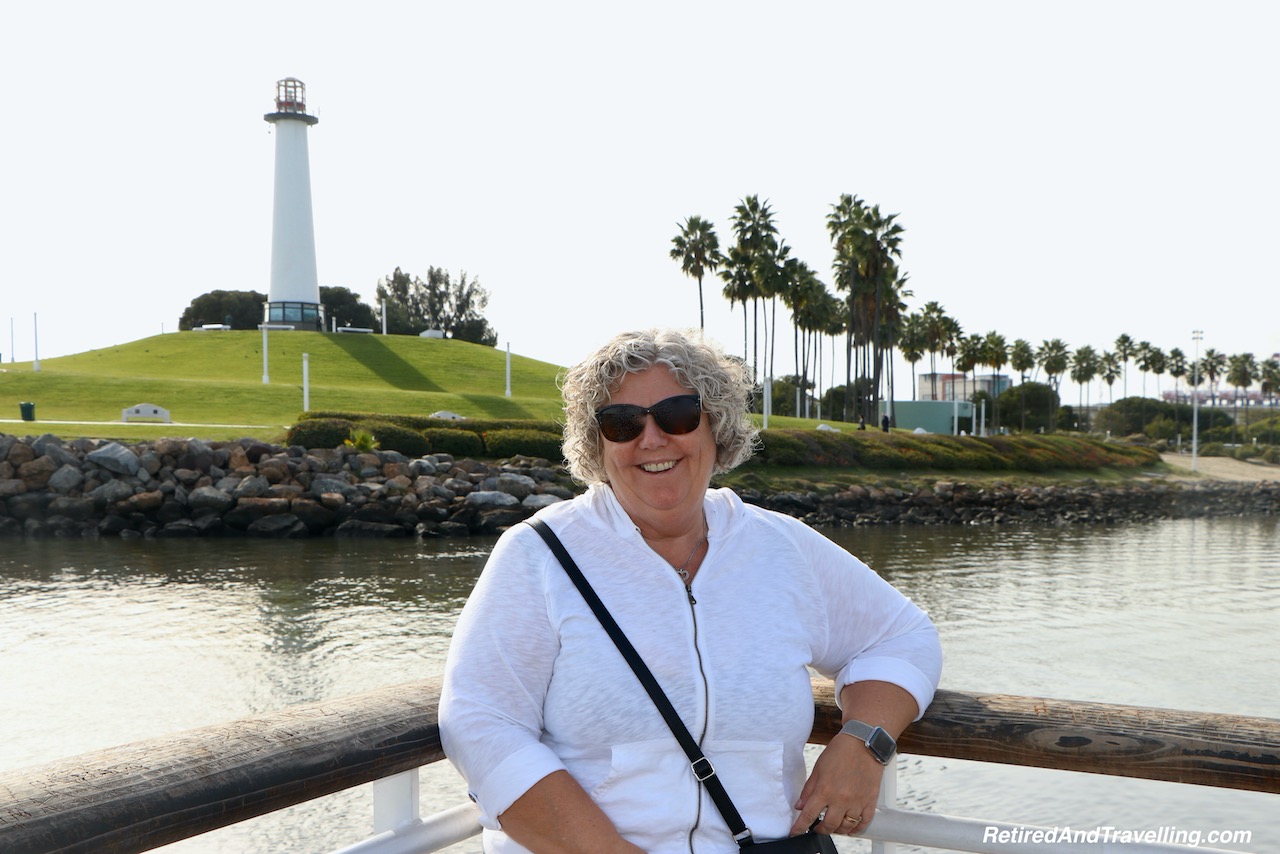 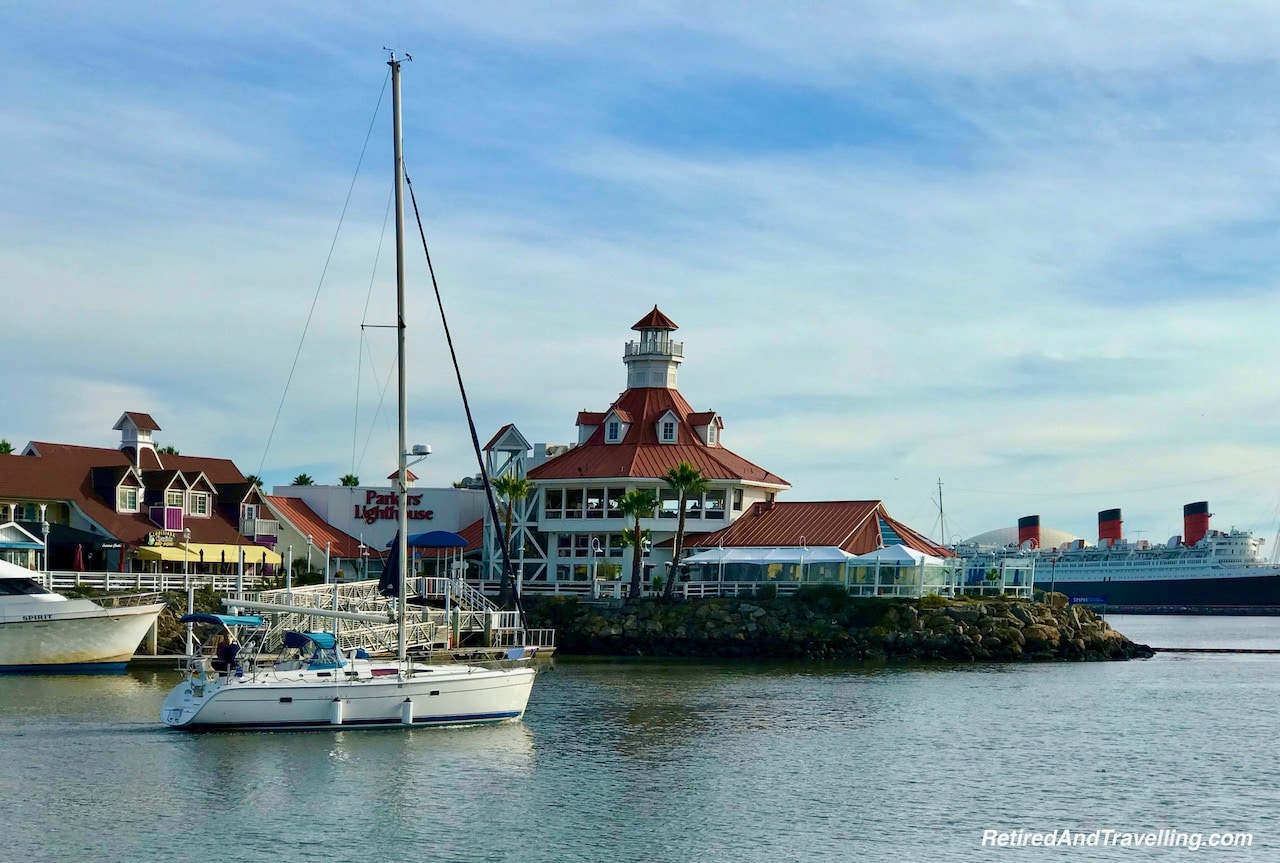 Docked in the harbour was the Queen Mary ship. There were tours available to see this ship. And you could even book a room to stay on the ship or visit for special events. 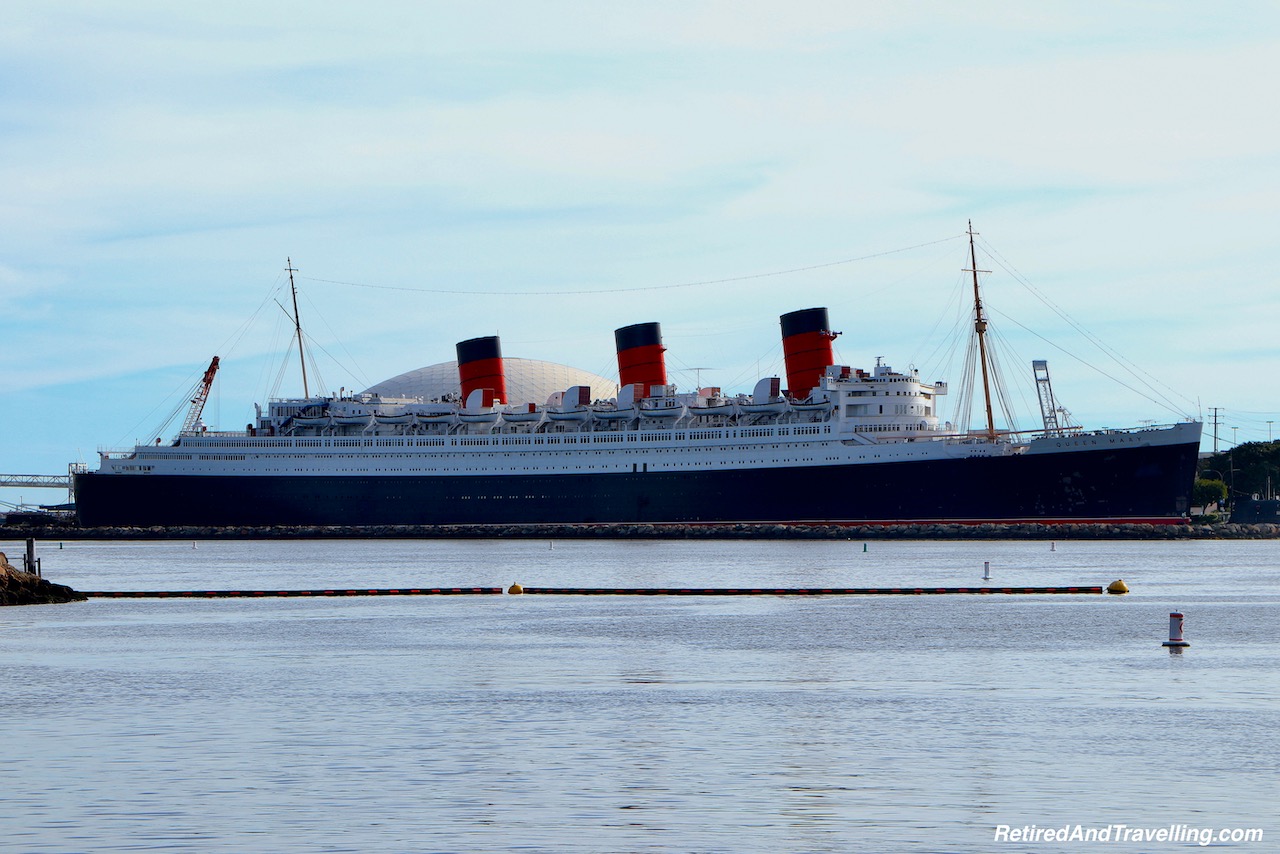 There was much to do on the harbourfront on a cruise from Long Beach in the holiday season.

It seemed that everywhere we looked we found yet another piece of colourful street art in Long Beach. Large murals covered the sides of buildings. 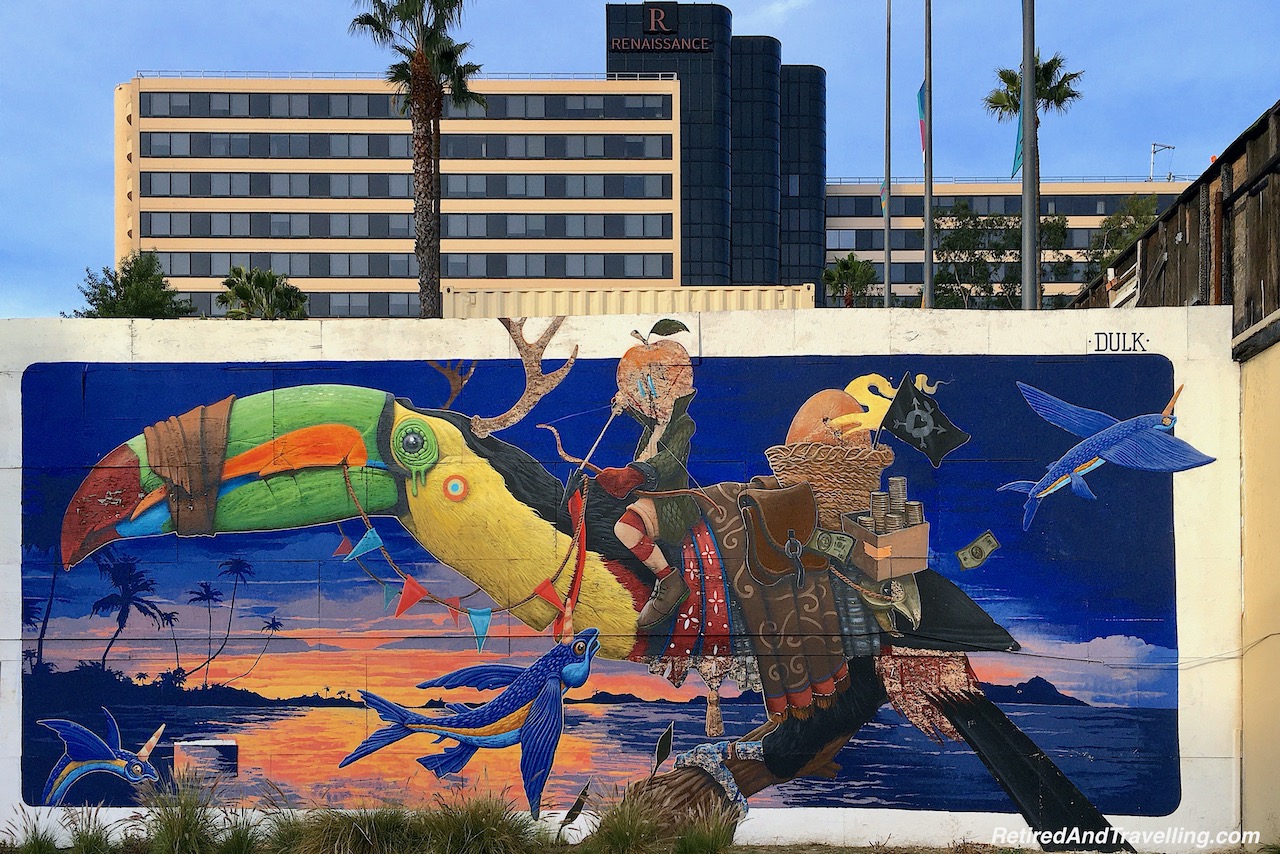 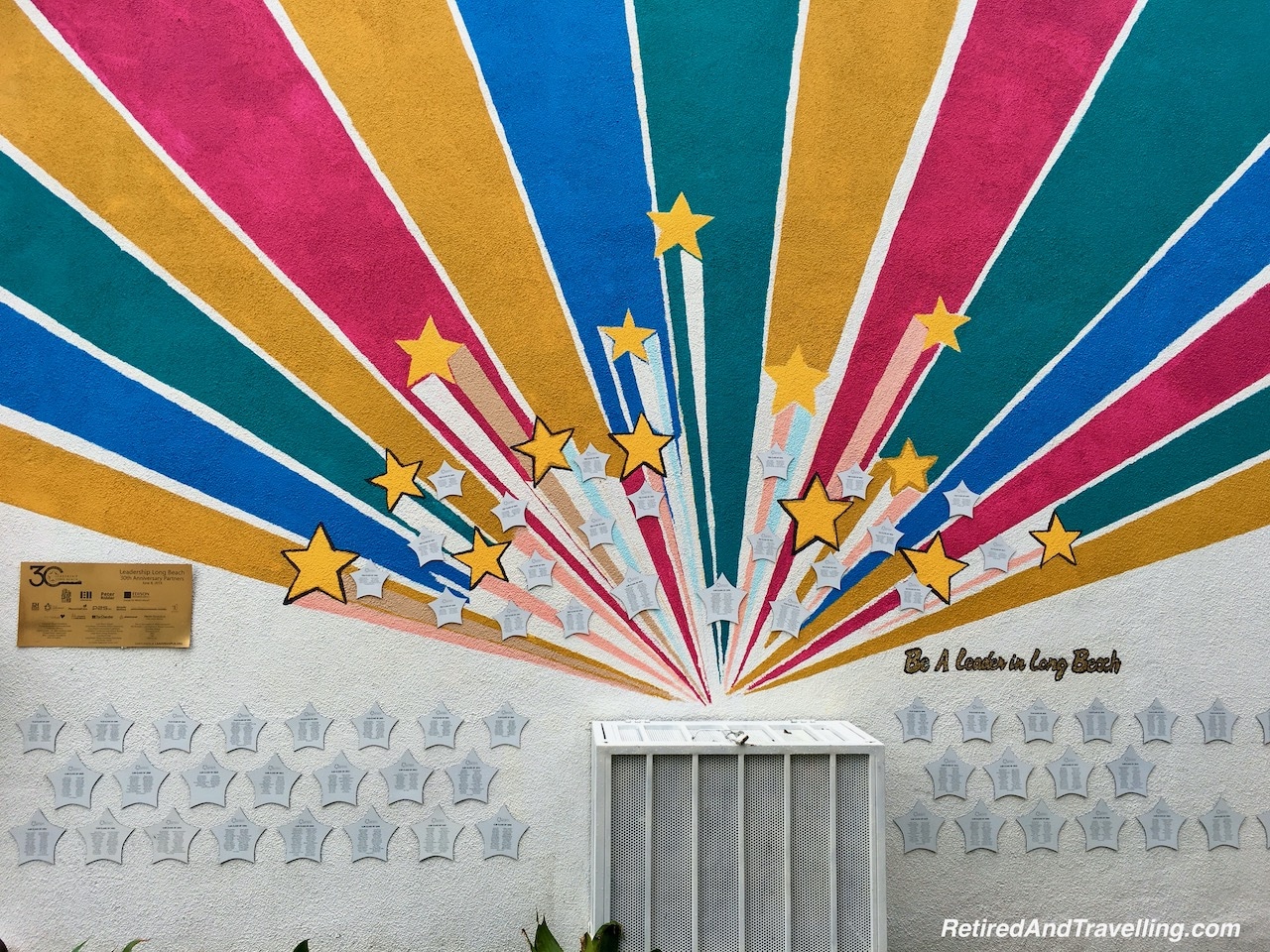 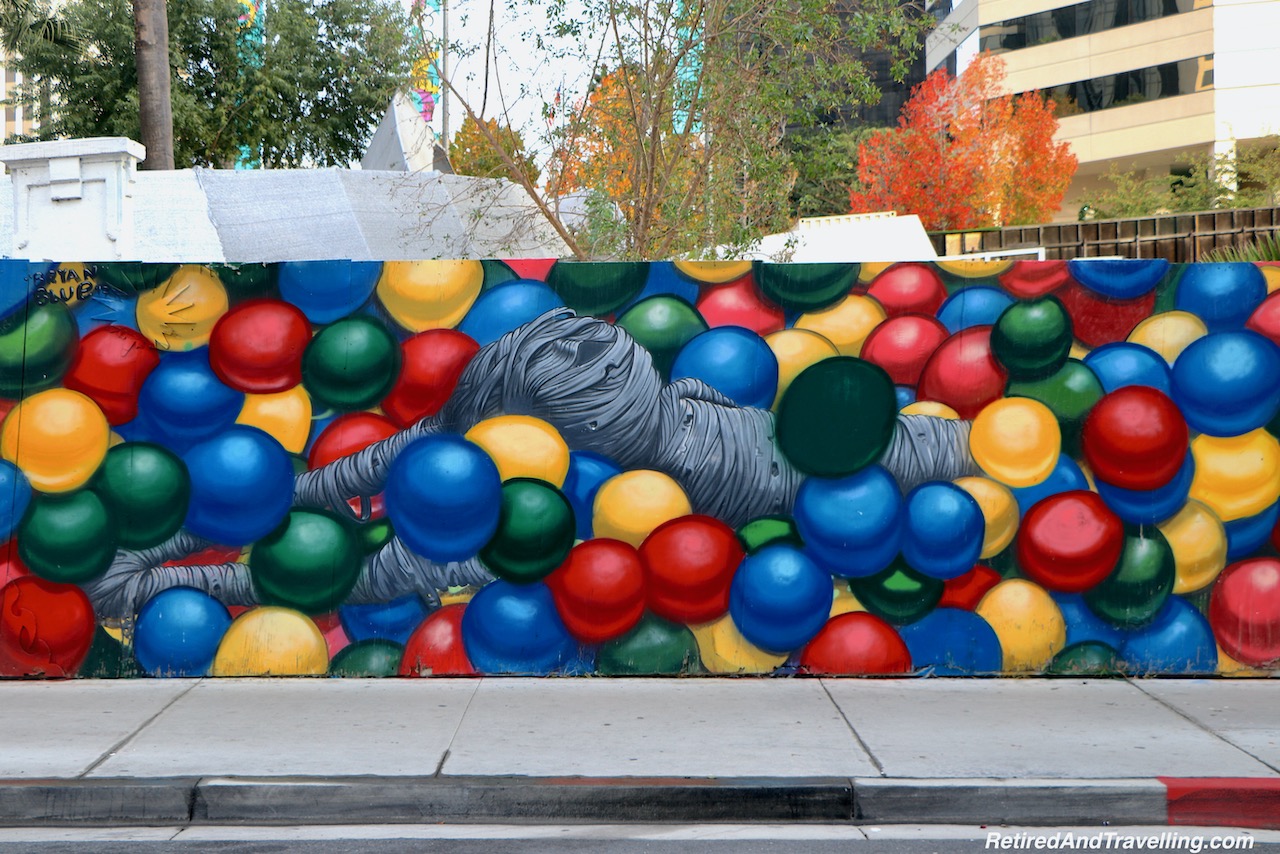 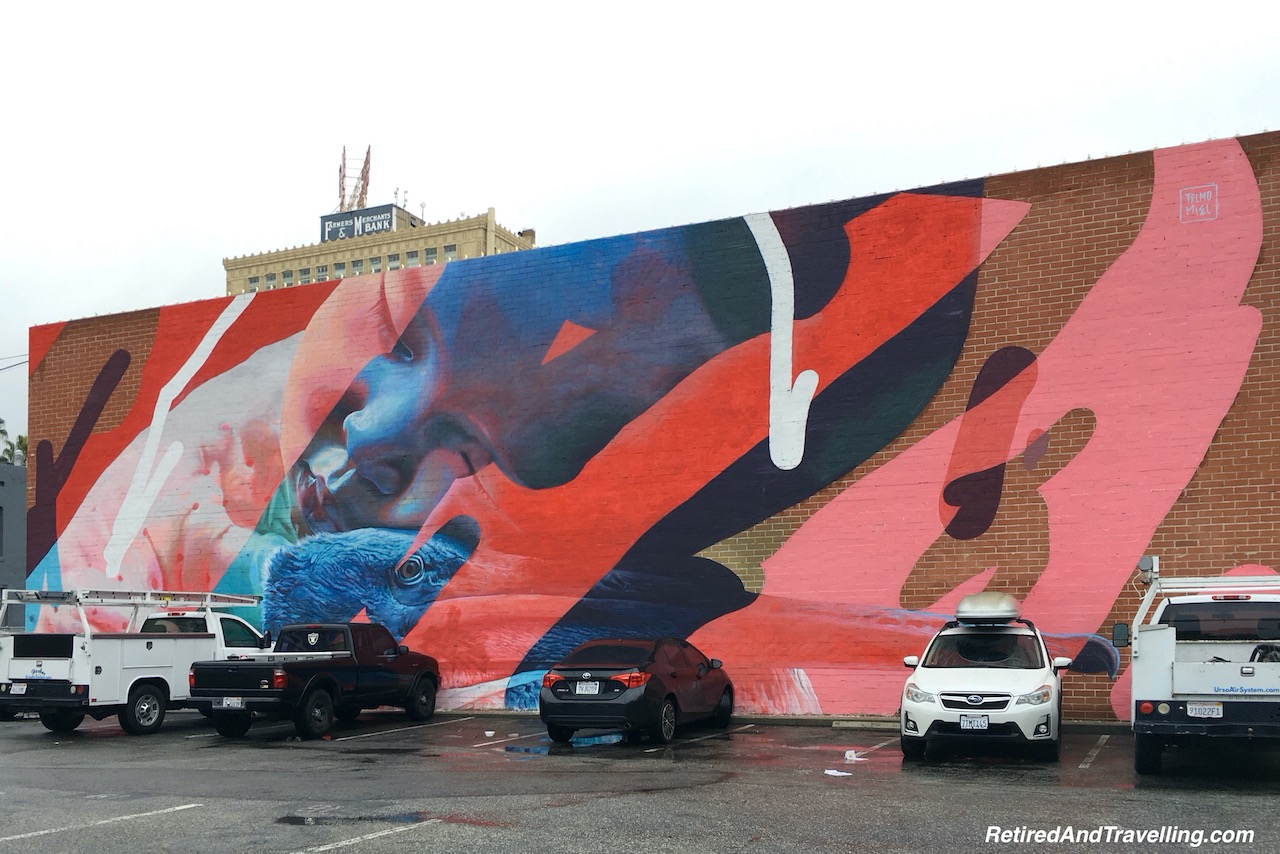 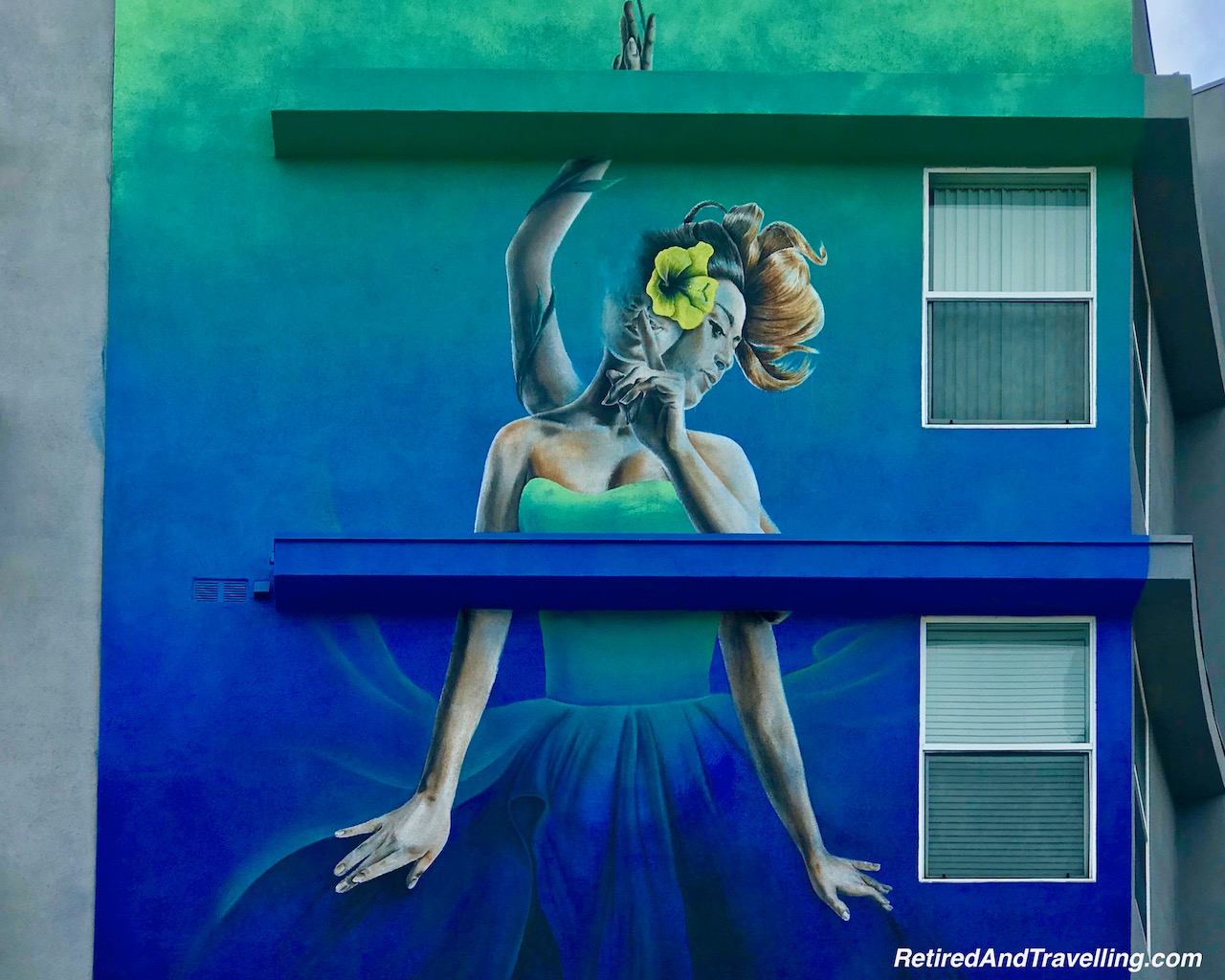 Art decorated the sides of electrical boxes. Fanciful pieces were used to draw you into restaurants. And if that didn’t work, Hamburger Mary’s had a set of colourful wings that could be posed with. 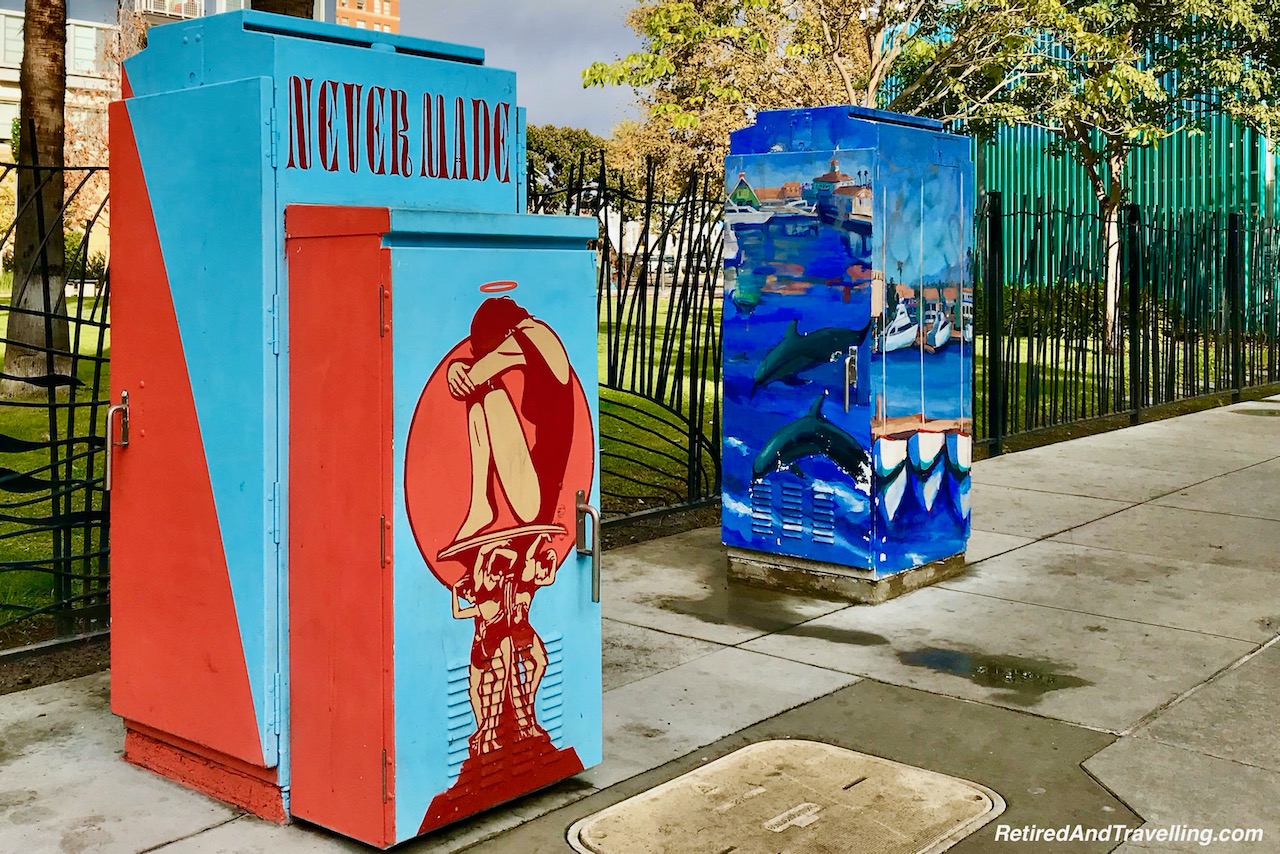 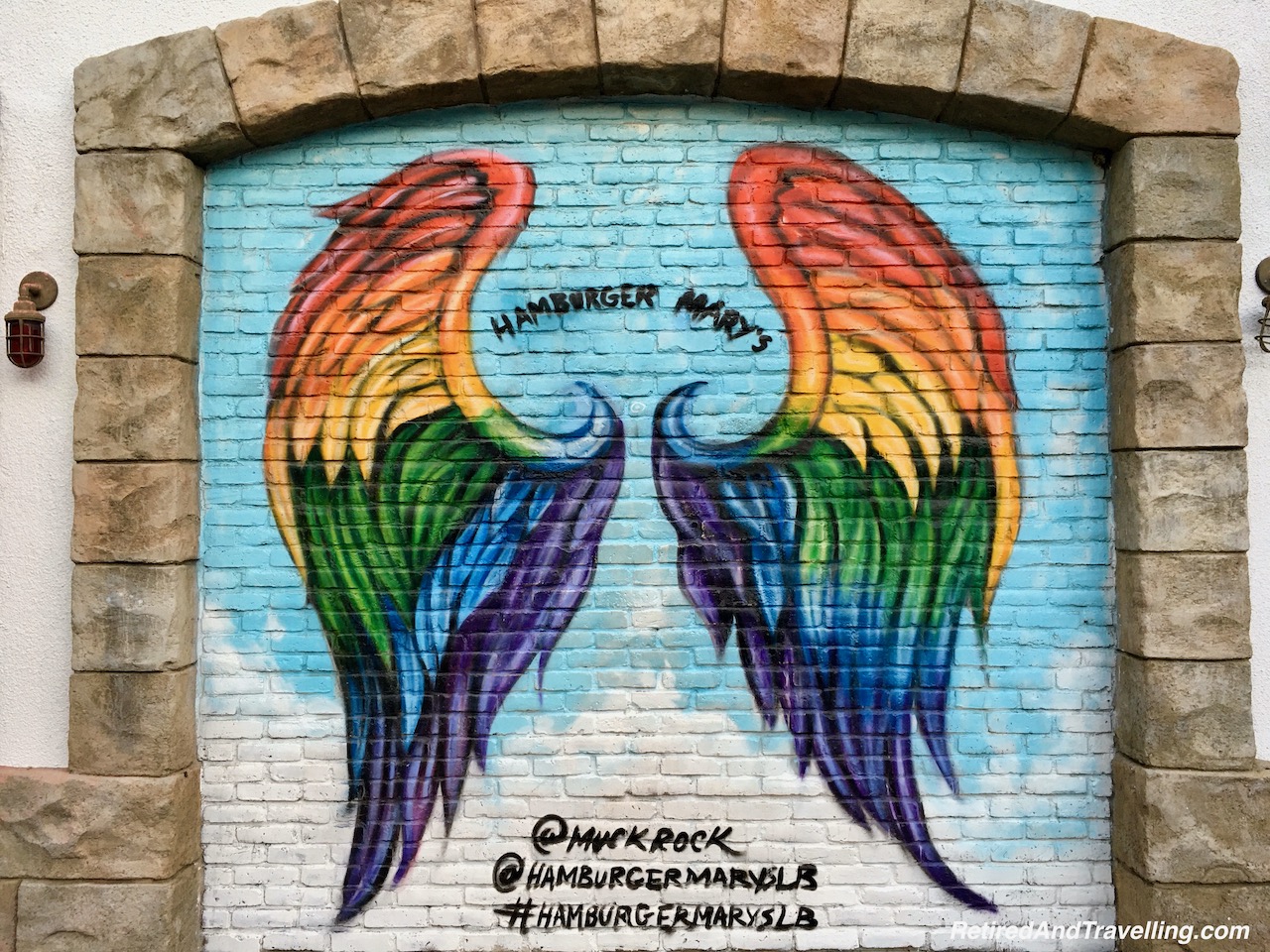 A blue tile mural told the history of Long Beach. This blue tile reminded us very much of the blue tile art used in Portugal to tell stories. 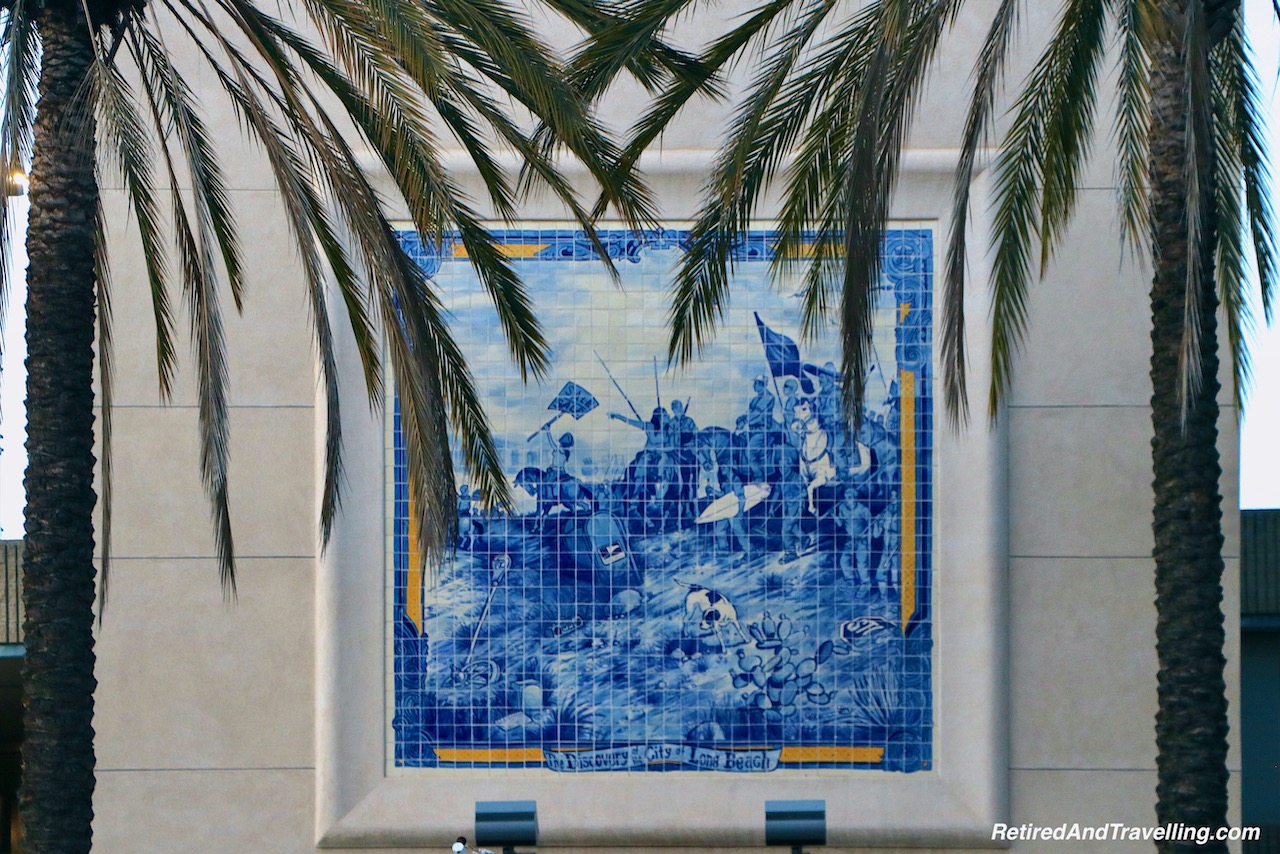 When you take a cruise from Long Beach, make sure to explore the city for street art. We found so many interesting pieces.

Long Beach In The Holiday Season

The city of Long Beach was decorated for the holiday season. Wreaths were on the light poles on the streets. A blow up Santa welcomed us to a local business. 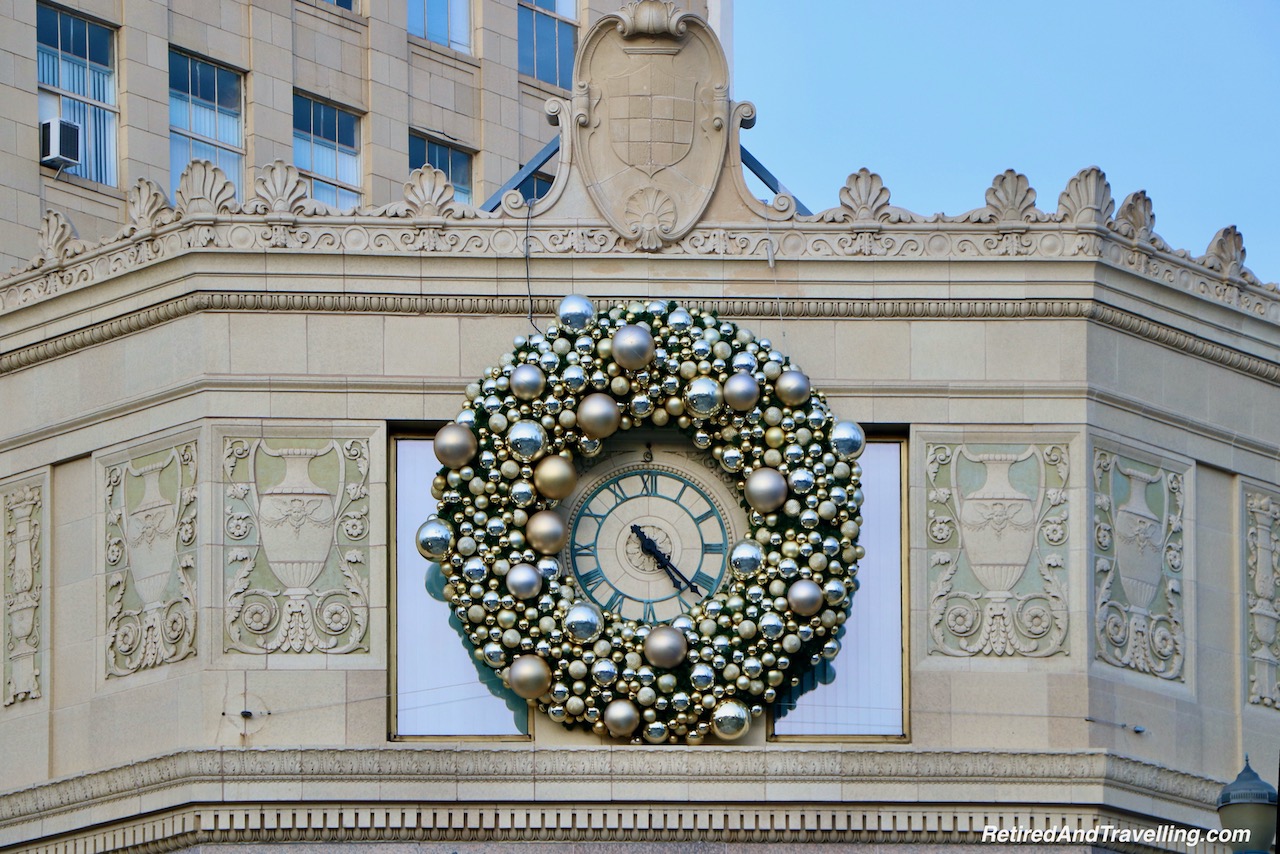 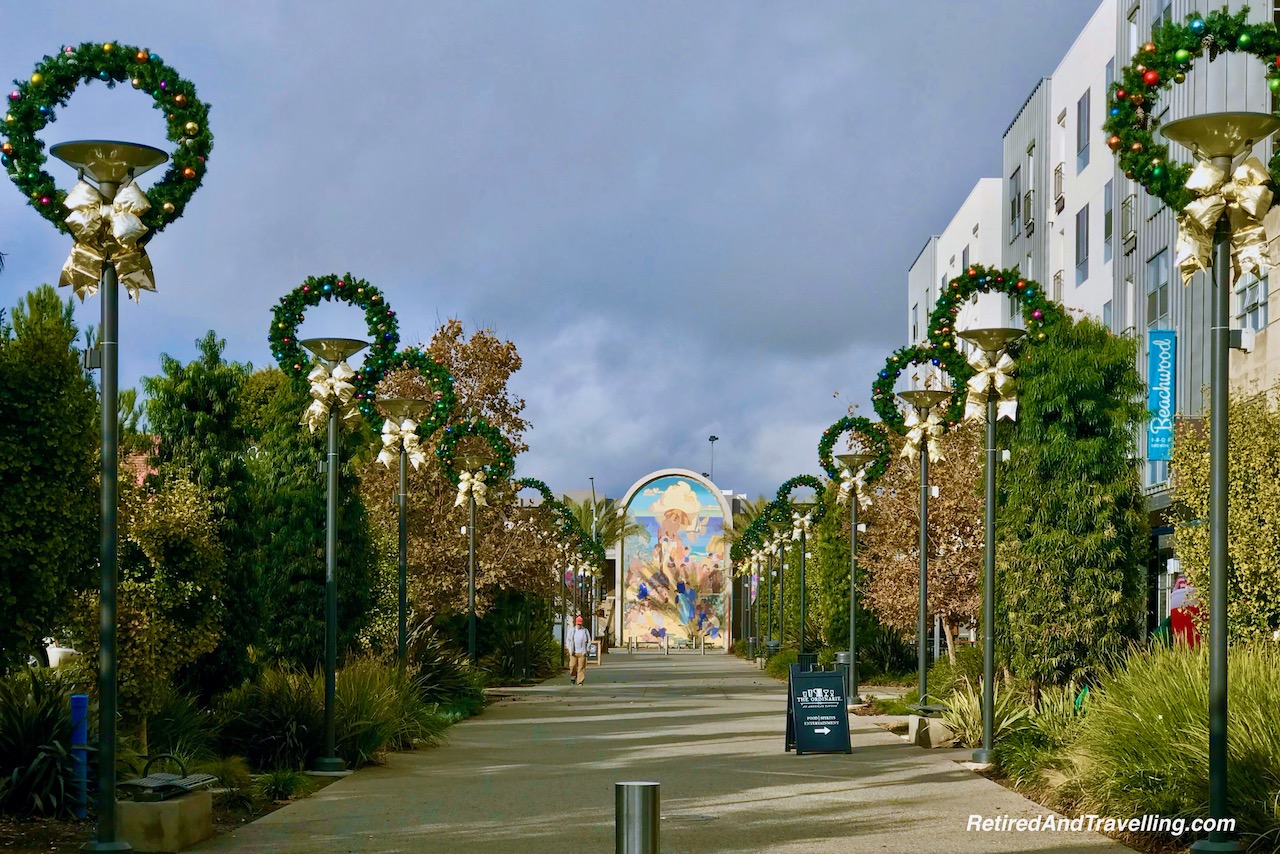 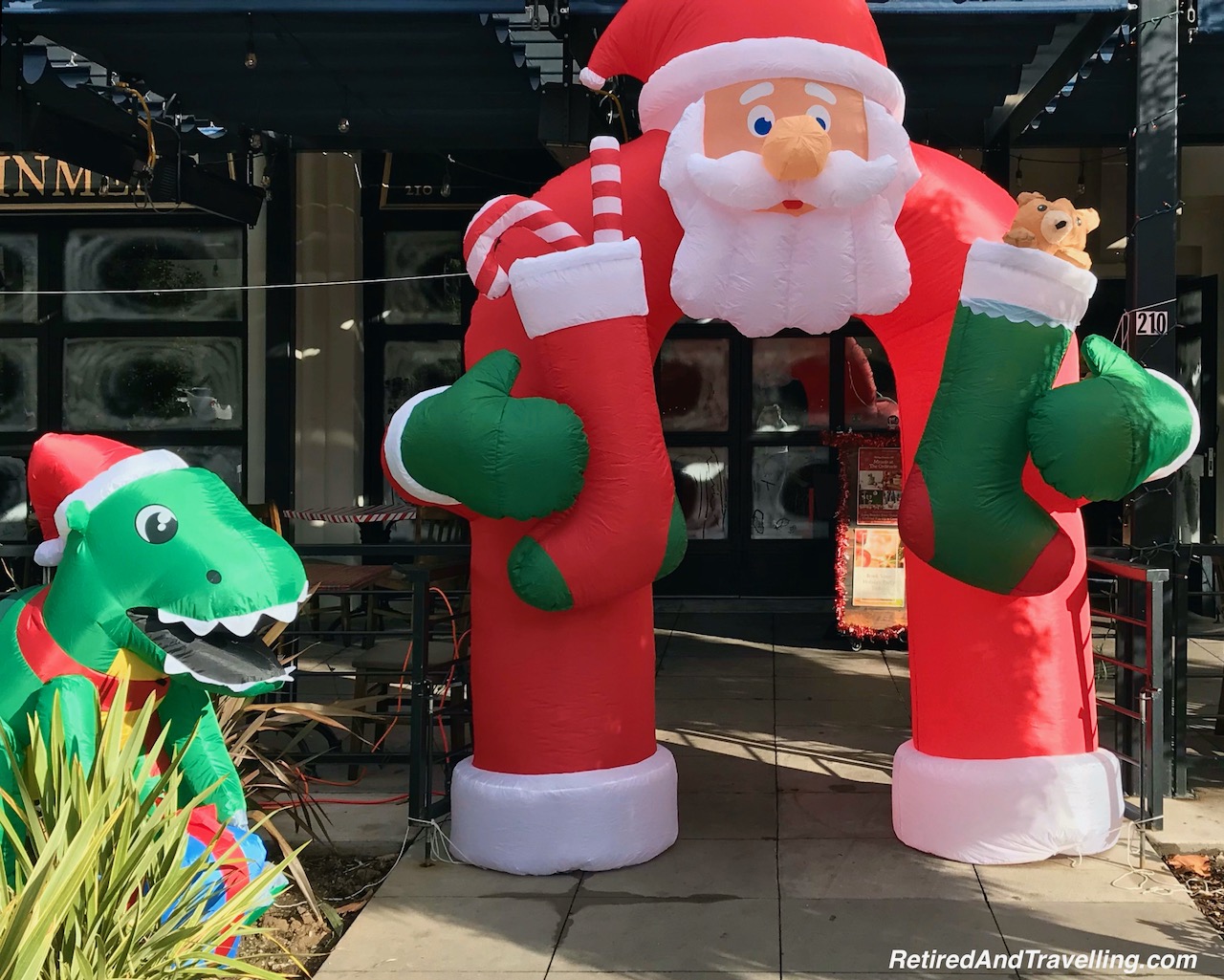 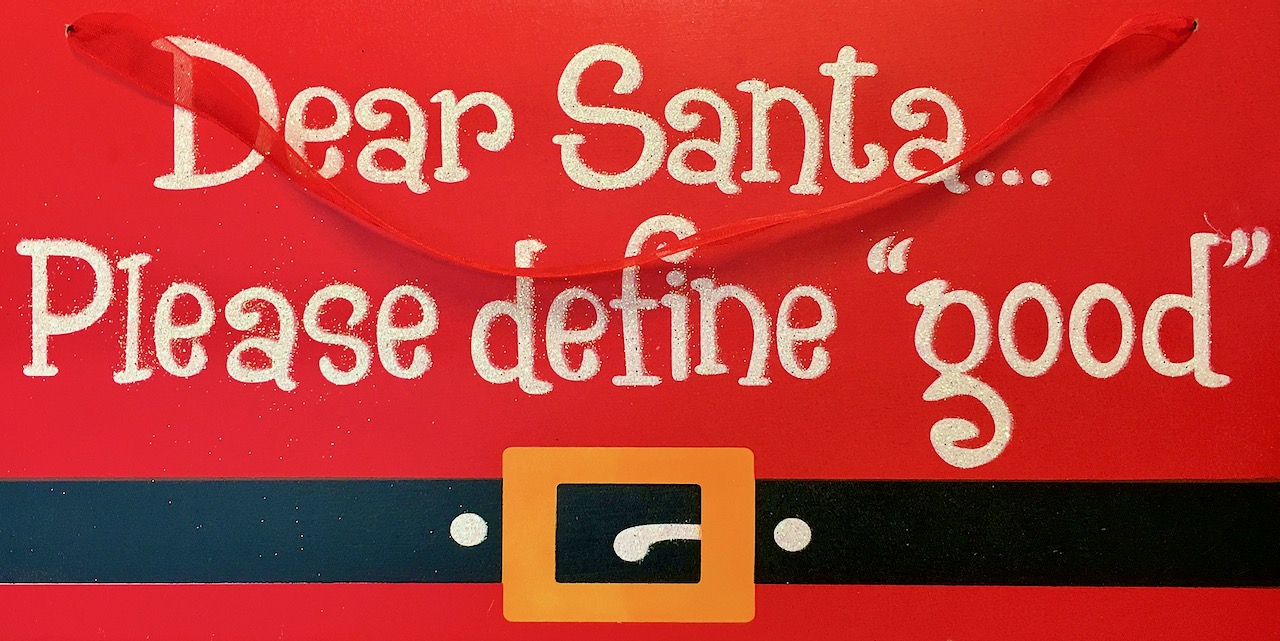 At night, the coloured lights drew us to the Long Beach Performing Art Centre building. The large Christmas tree and holiday lights were beautiful. And the fountain show added more touches of colour and movement. It was fun to watch. 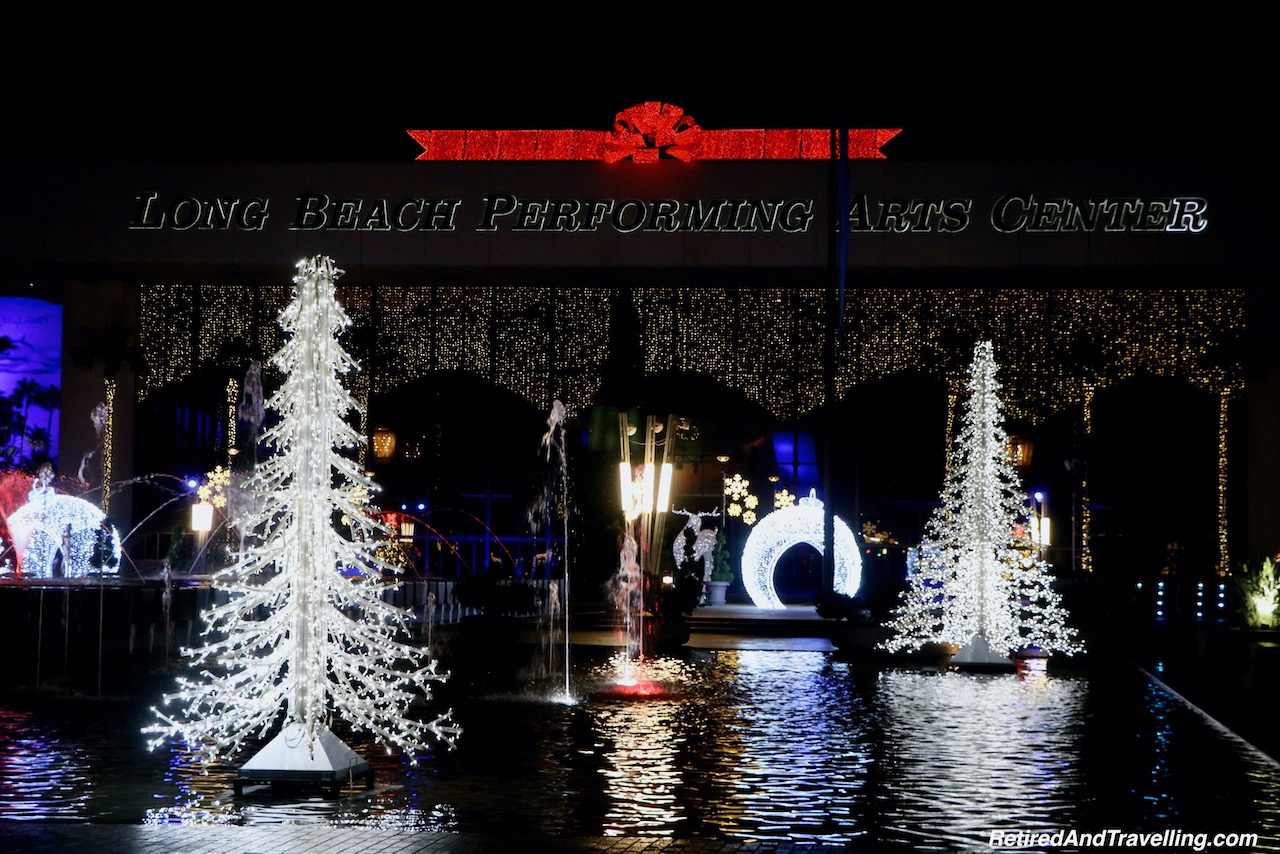 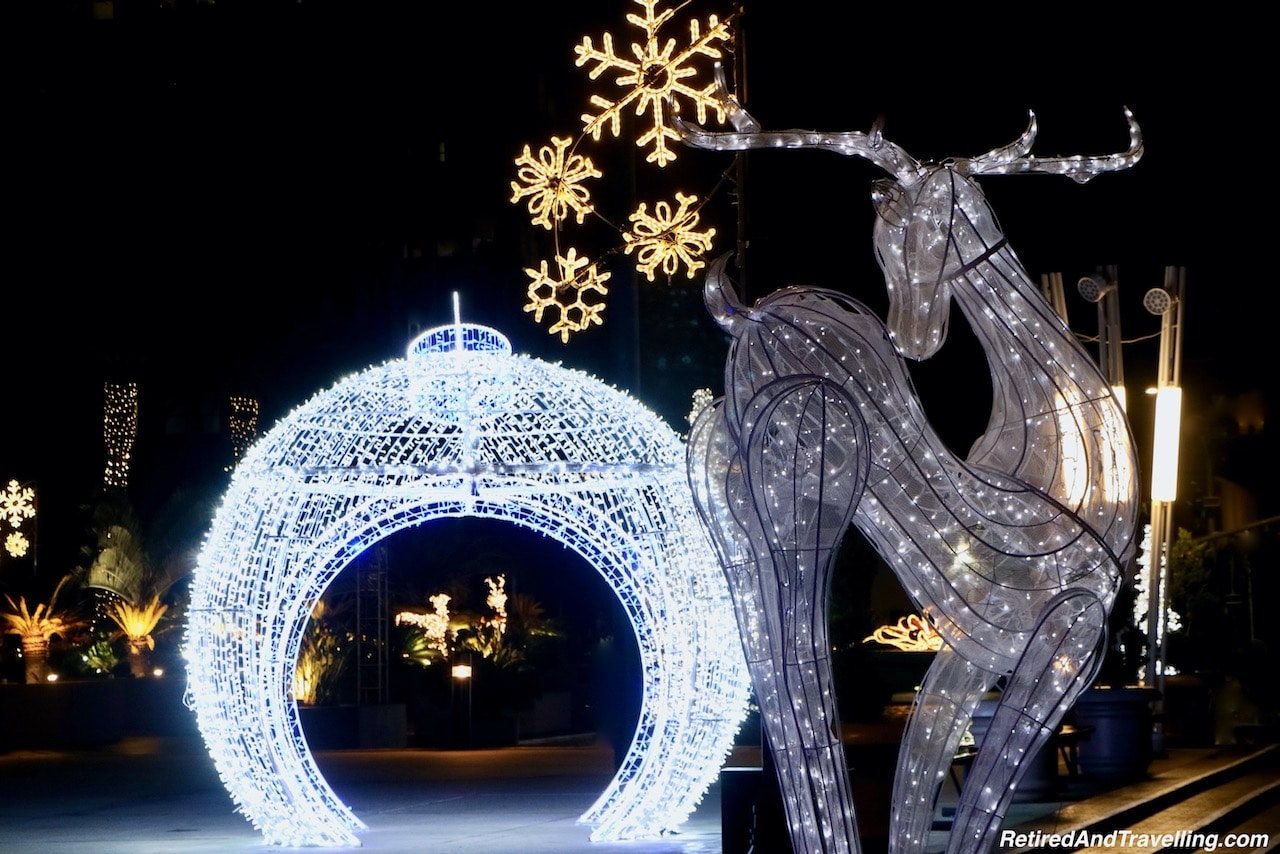 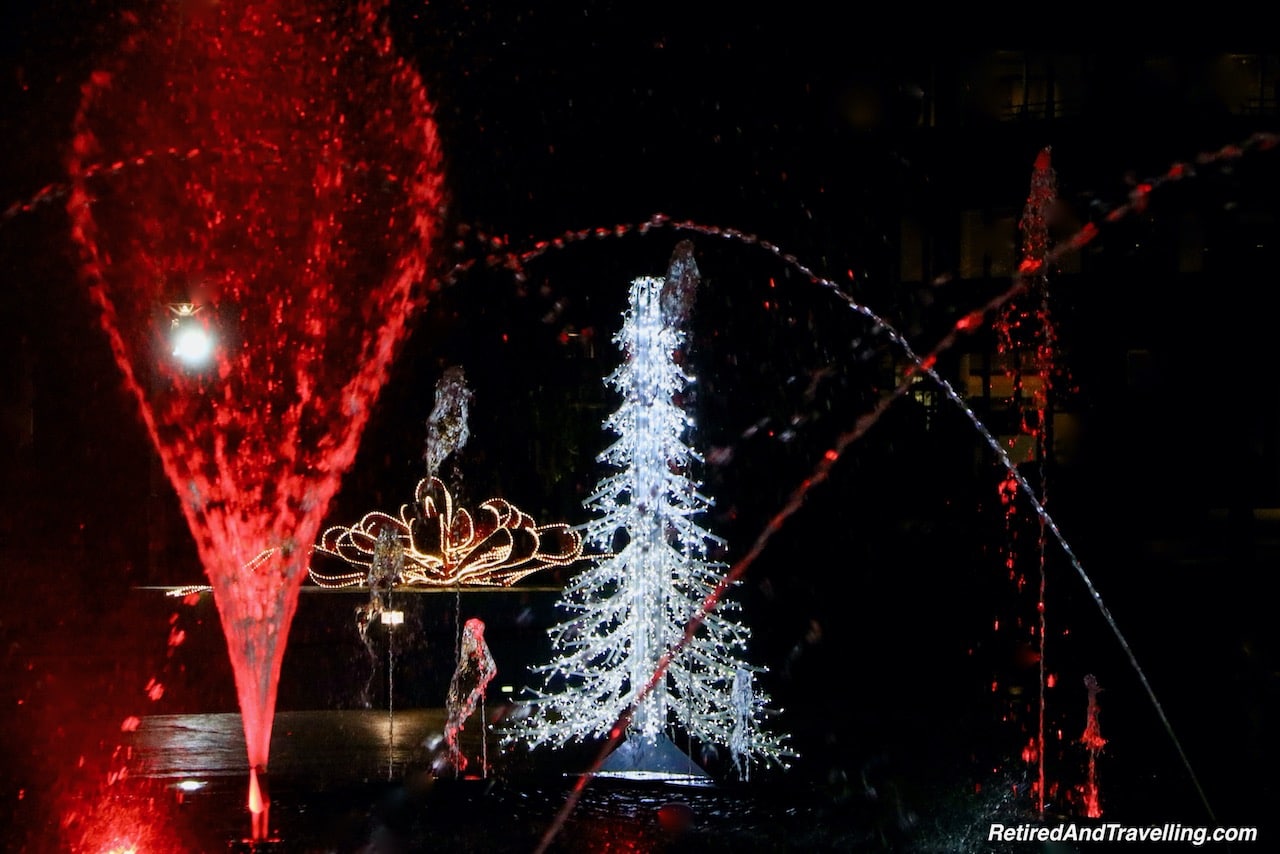 Heading To The Cruise Port

There were two cruise ports in Long Beach. The cruise port close to our hotel at Rainbow Harbour was the home base for Carnival Cruise Lines. On several days we saw ships in the port.

The LA World Cruise Centre was a bit further north in San Pedro. Most cruise lines docked in San Pedro. Our Oceania Cruises cruise from Long Beach in the holiday season left from Pier 93 in San Pedro. 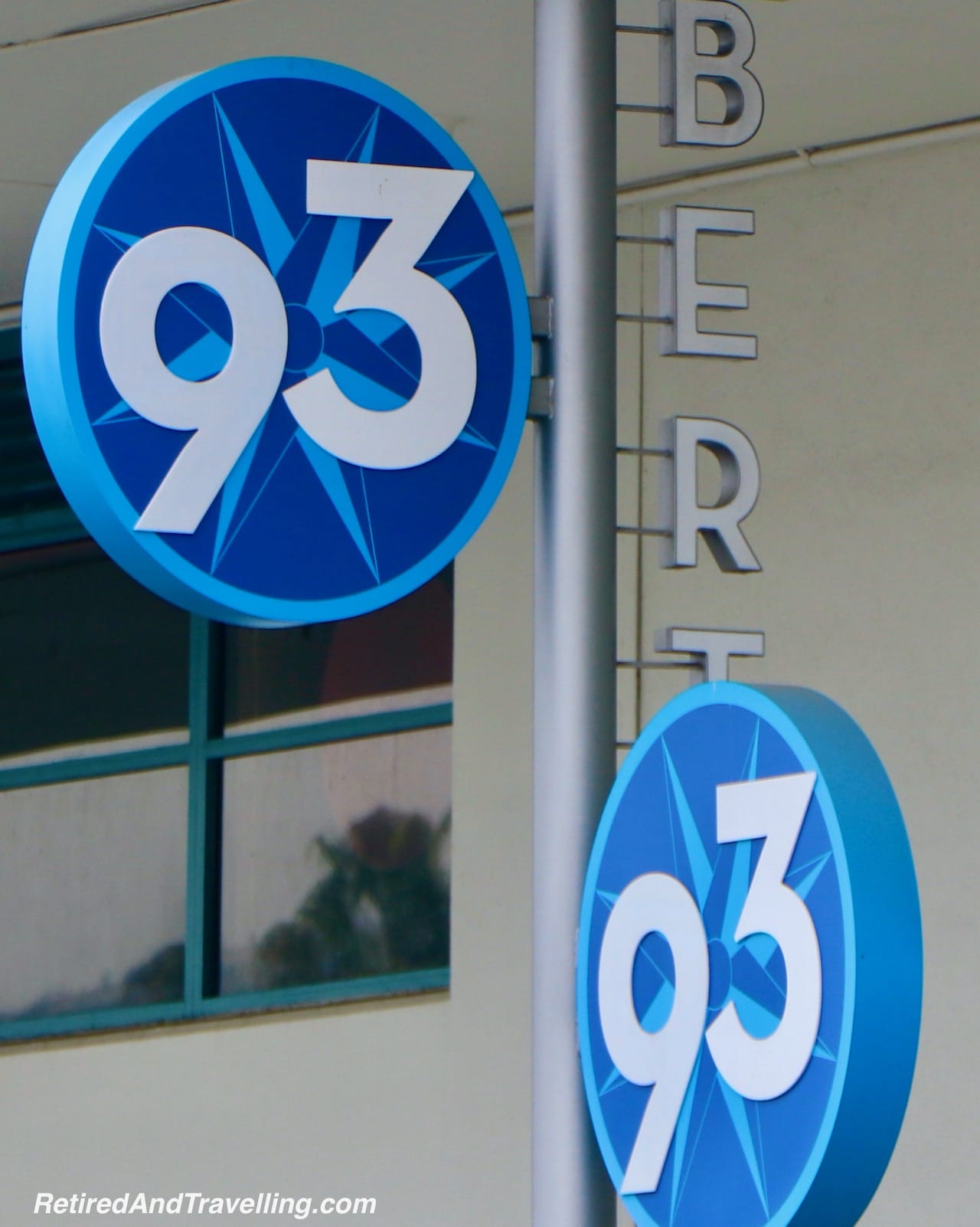 It was an easy Uber ride to get from downtown Long Beach to the cruise dock. When we returned to the port after our cruise, it was again easy to get an Uber to the airport.

Cruise From Long Beach In The Holiday Season

We enjoyed our short stay in Long Beach before our cruise along the California coast. There was much to see and do along the waterfront. Everywhere we looked we were delighted with the street art we found.

The first port on our cruise was on Catalina Island. We were excited to head out on a small boat to find playful dolphins and sea lions.

Have you done a cruise from Long Beach in the holiday season? Did you find it a great port to start from? 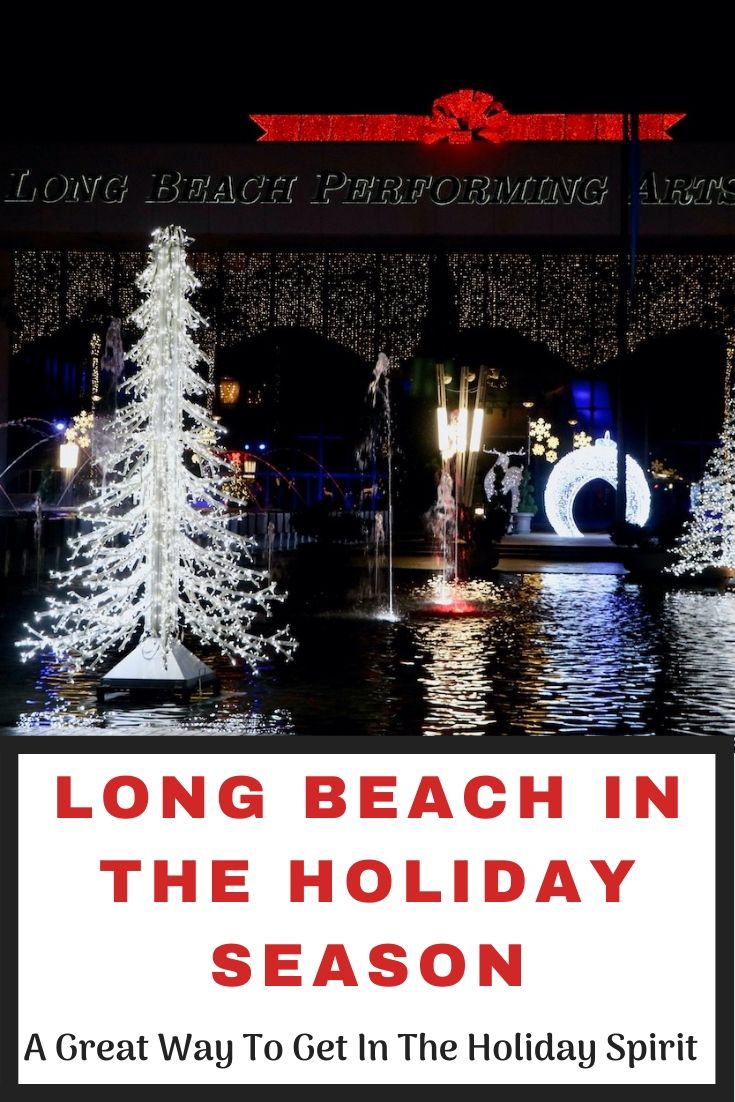 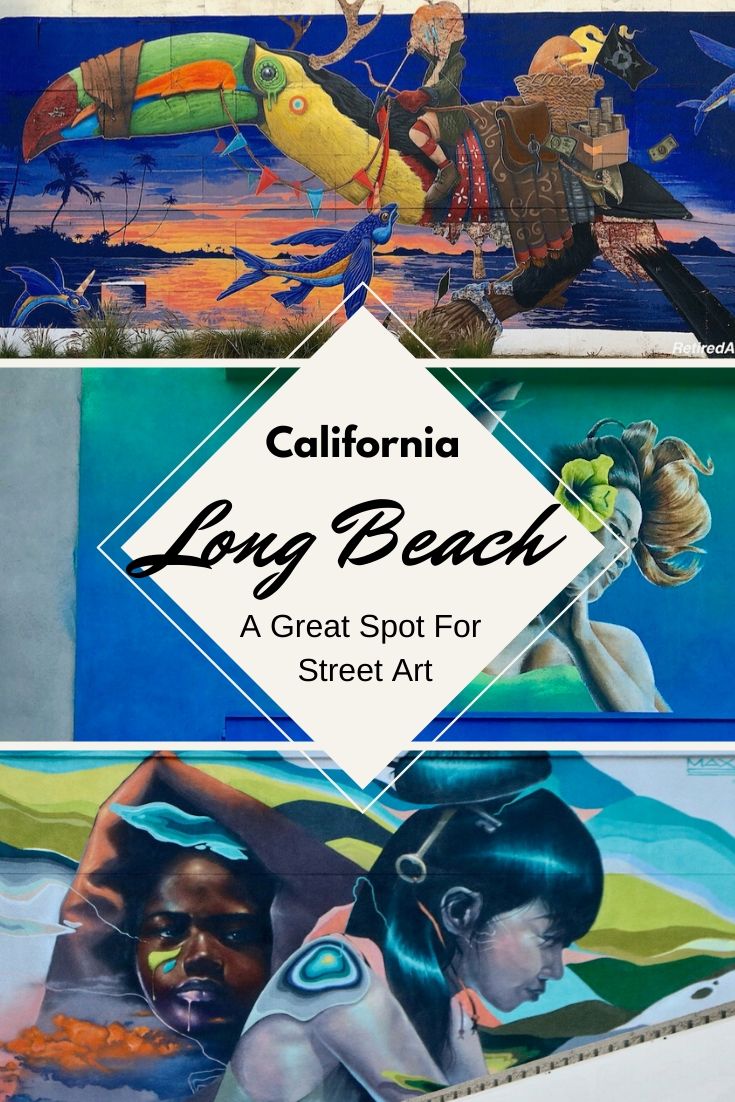 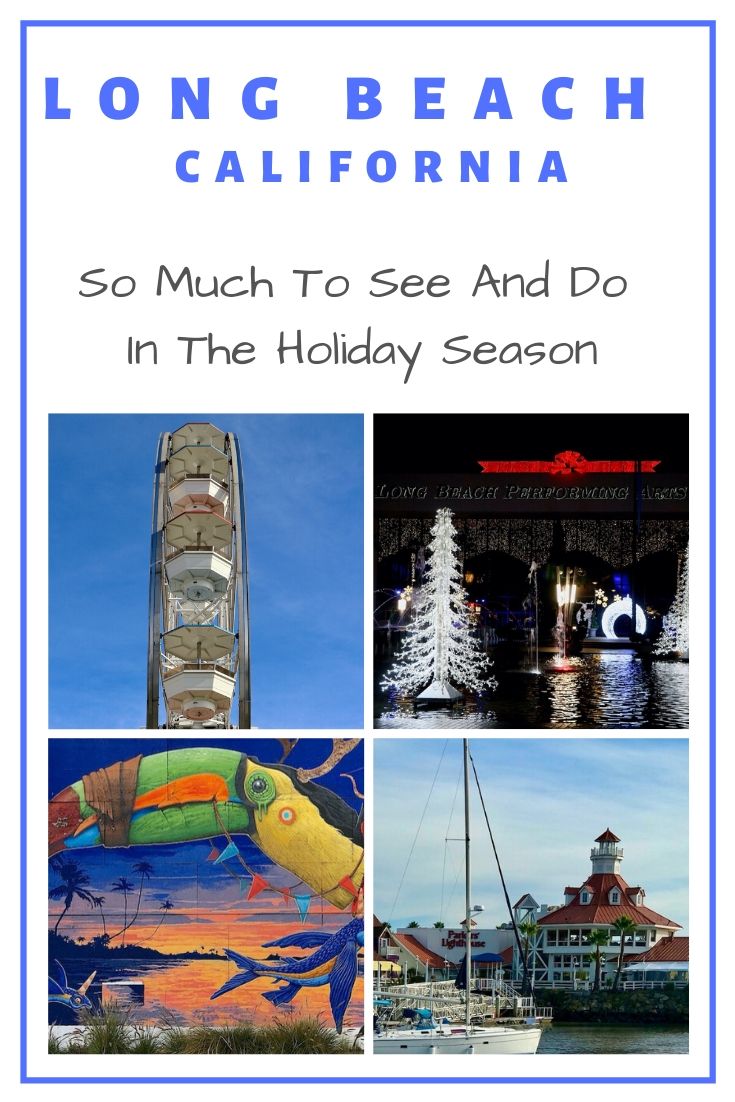