Santa Monica Outside LA But Close Enough To Visit

No trip down the west coast of the USA can be complete without seeing Los Angeles (LA).  When we looked for LA hotels, we debated being in the heart of the city (Beverly Hills, Hollywood, downtown) or staying by the water. We didn’t have a long LA set of “must do’s”.  So we opted to stay in Santa Monica outside LA.  We were in walking distance of the pier.  And an easy drive into the city when we wanted that experience.

I probably don’t need to say that we again selected Hwy 1 (or the Pacific Coast Highway “PCH”) for our driving day from Santa Barbara to Santa Monica. It was the “slow route”.  But it still took only a few hours. We stopped at vista points and we snapped pics of the Malibu coast.  We even wondered if we might see “Charlie” (of “Two and a Half Men” fame) as he hopped over his back deck to the sand. 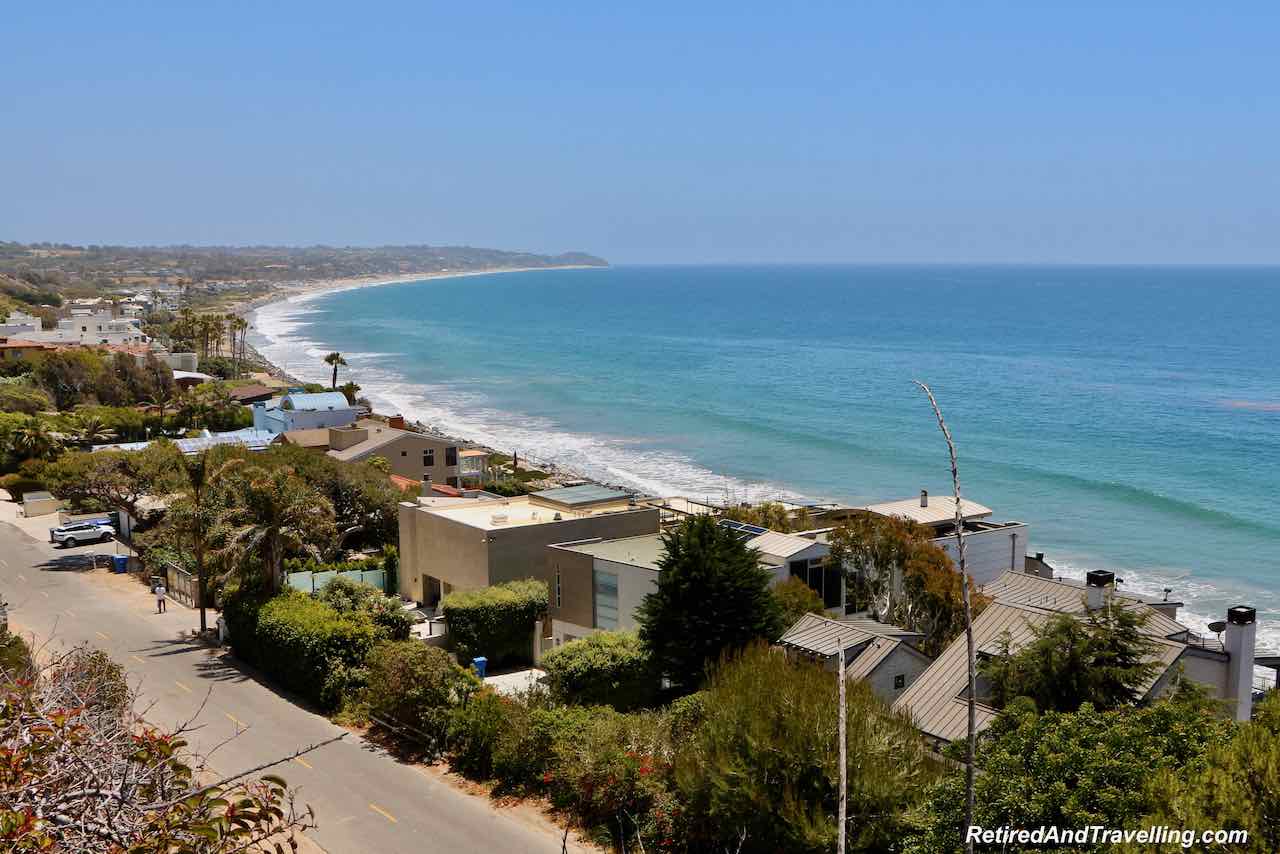 As we drove, we searched for a place for a seafood lunch in Malibu.  We found Malibu Seafood on the northbound side of Hwy 1 at the end of Malibu closest to LA. Coming from Santa Barbara, we parked on the roadside and run across the divided highway.  It was quite doable on a quiet Tuesday at 1:30.  But it might be taking your life in your hands on a busy weekend. 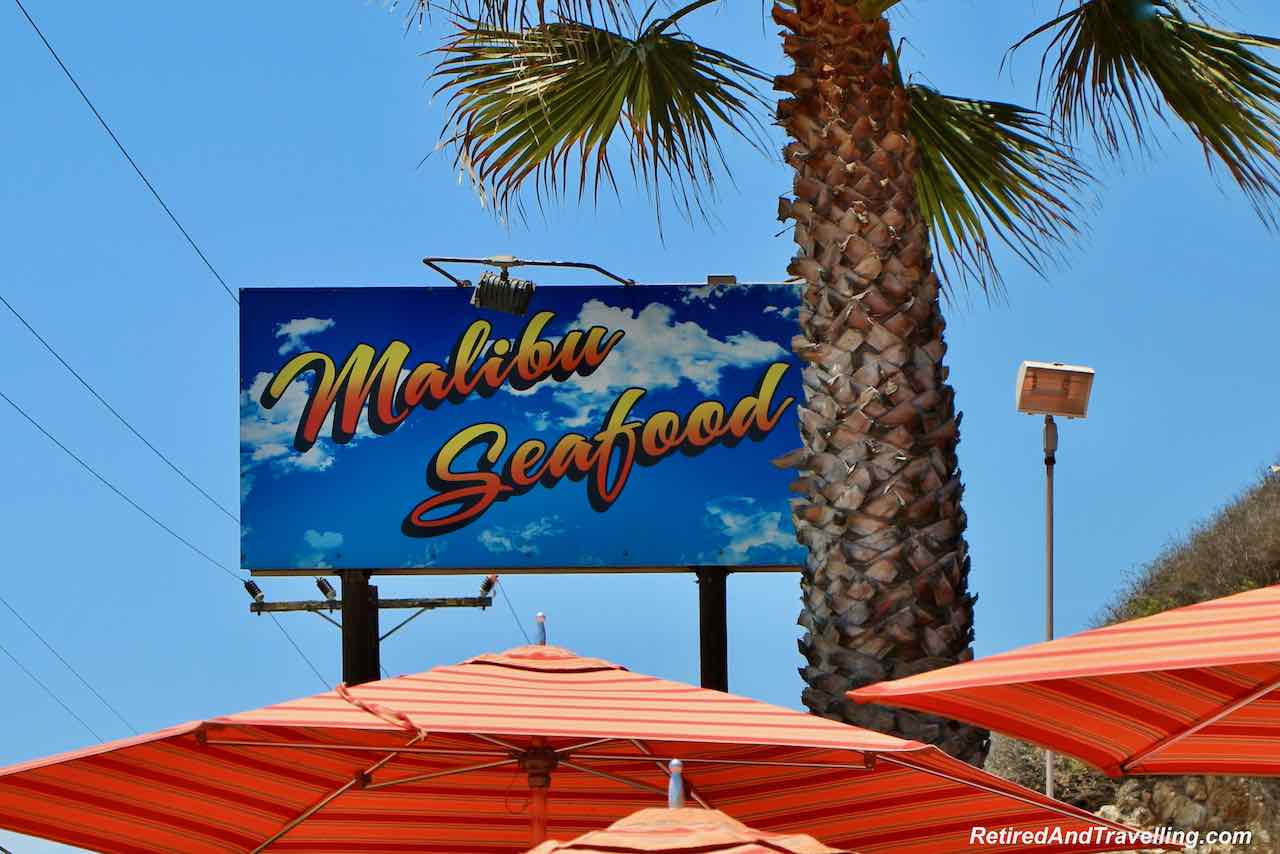 We didn’t stop when we went through Huntington Beach or Long Beach.  We thought we might return.  But we never made it back up that way again.

The Viceroy Hotel was our “splurge” hotel.  It was much more expensive that any other we stayed in.  That was partly because of its location close to the pier and partly because it was billed as a 4 star hotel.

Our parking costs in San Francisco had partially prepared us for the cost to keep our car in place for most of the 3 days we were there.  But it seemed that there were no real options if we wanted to be around the pier.

It was a short walk to the fun and excitement on the Santa Monica Pier. We strolled slowly and enjoyed the sun, the surf and the local colour. It was a cheesy, fun iconic thing to do but the people watching was great. 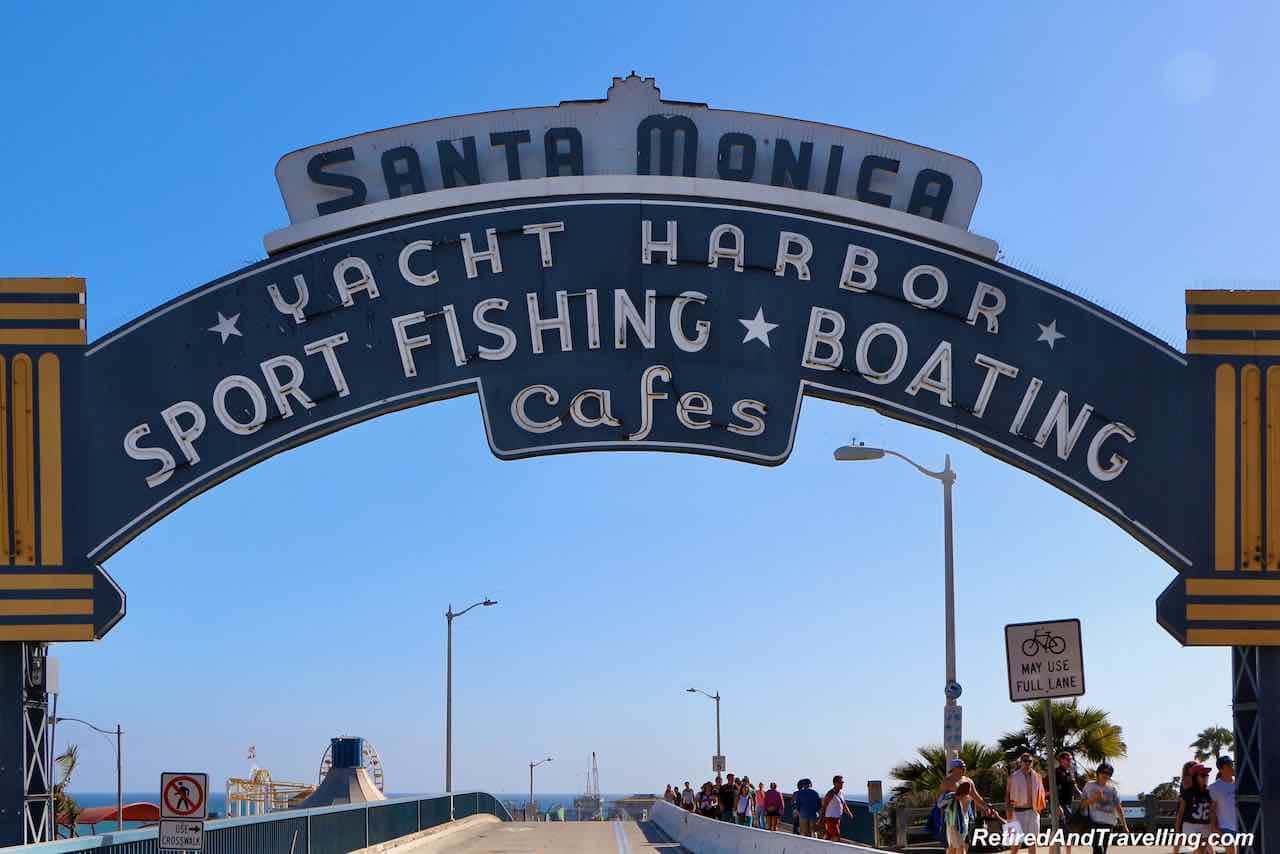 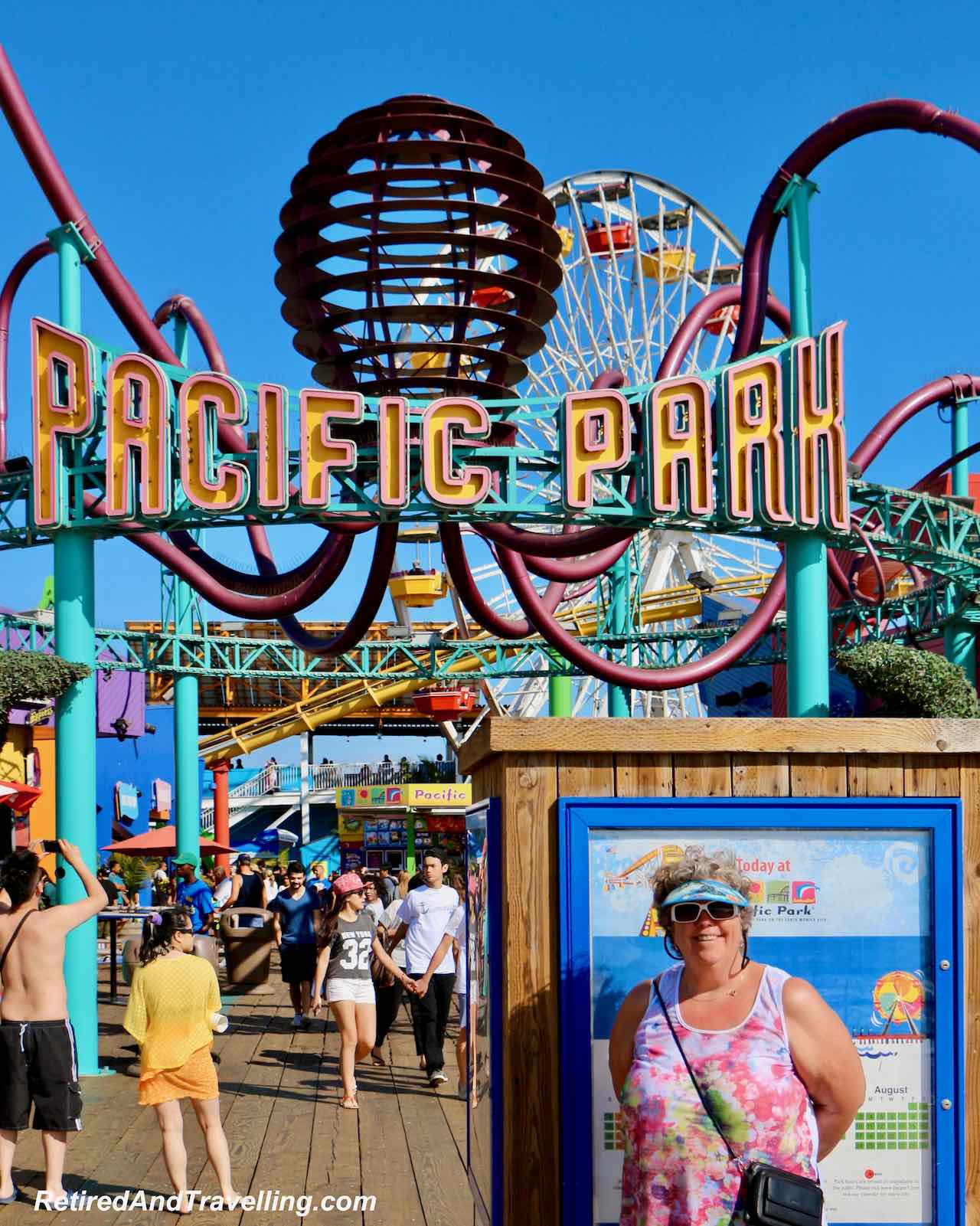 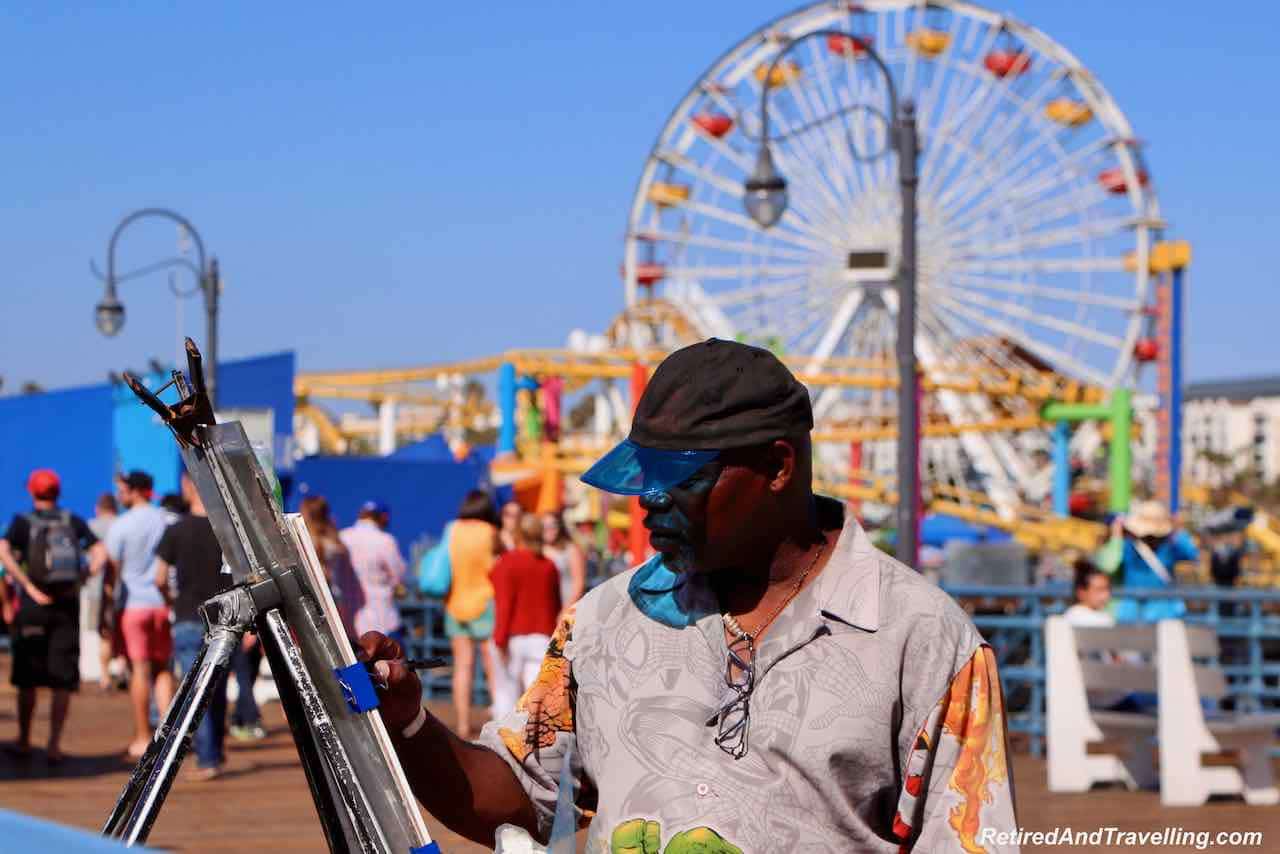 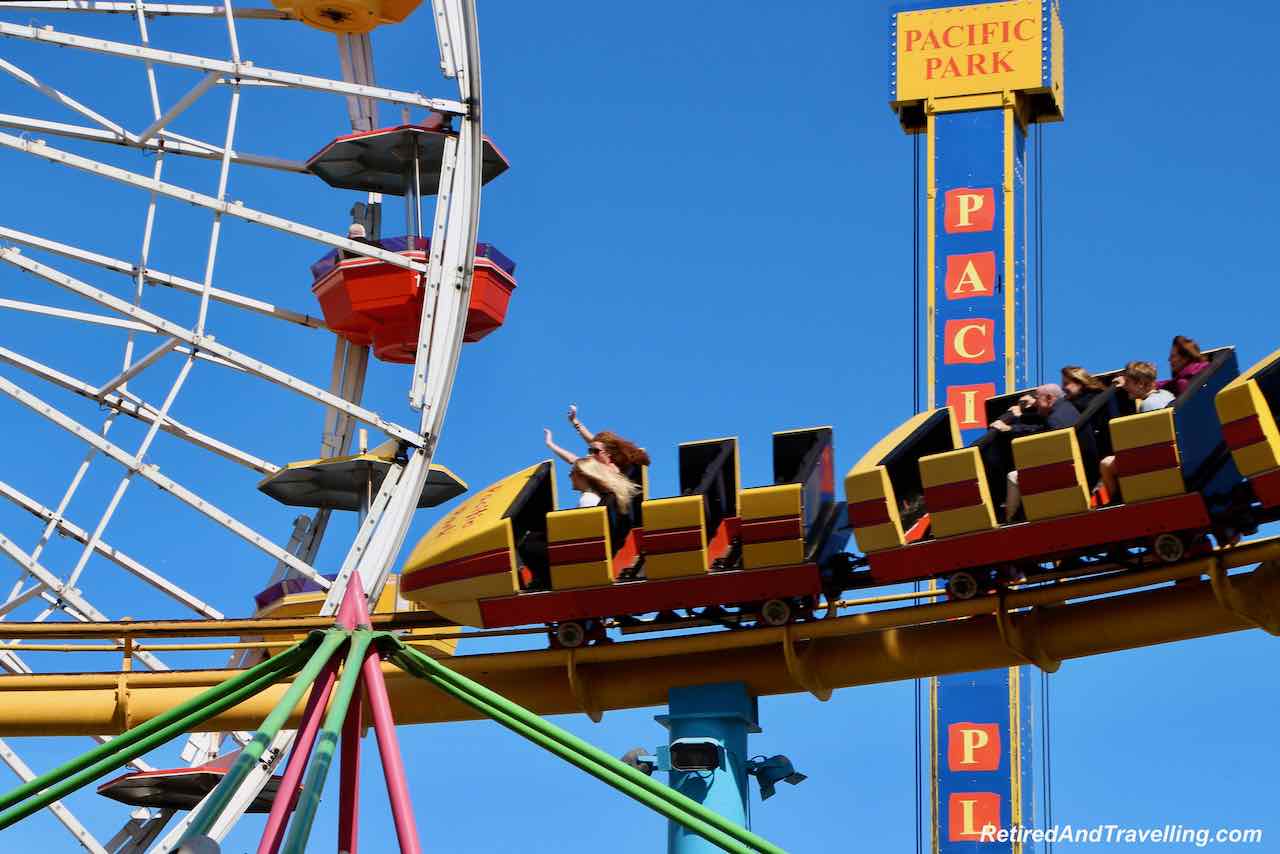 We Found Things To Do In Santa Monica

When we stayed in Santa Monica outside LA, there was lots to keep us entertained.

The beach seemed to go on forever in both directions. I had hoped to find surfers.  But the rolling waves were not really big enough while we were there. 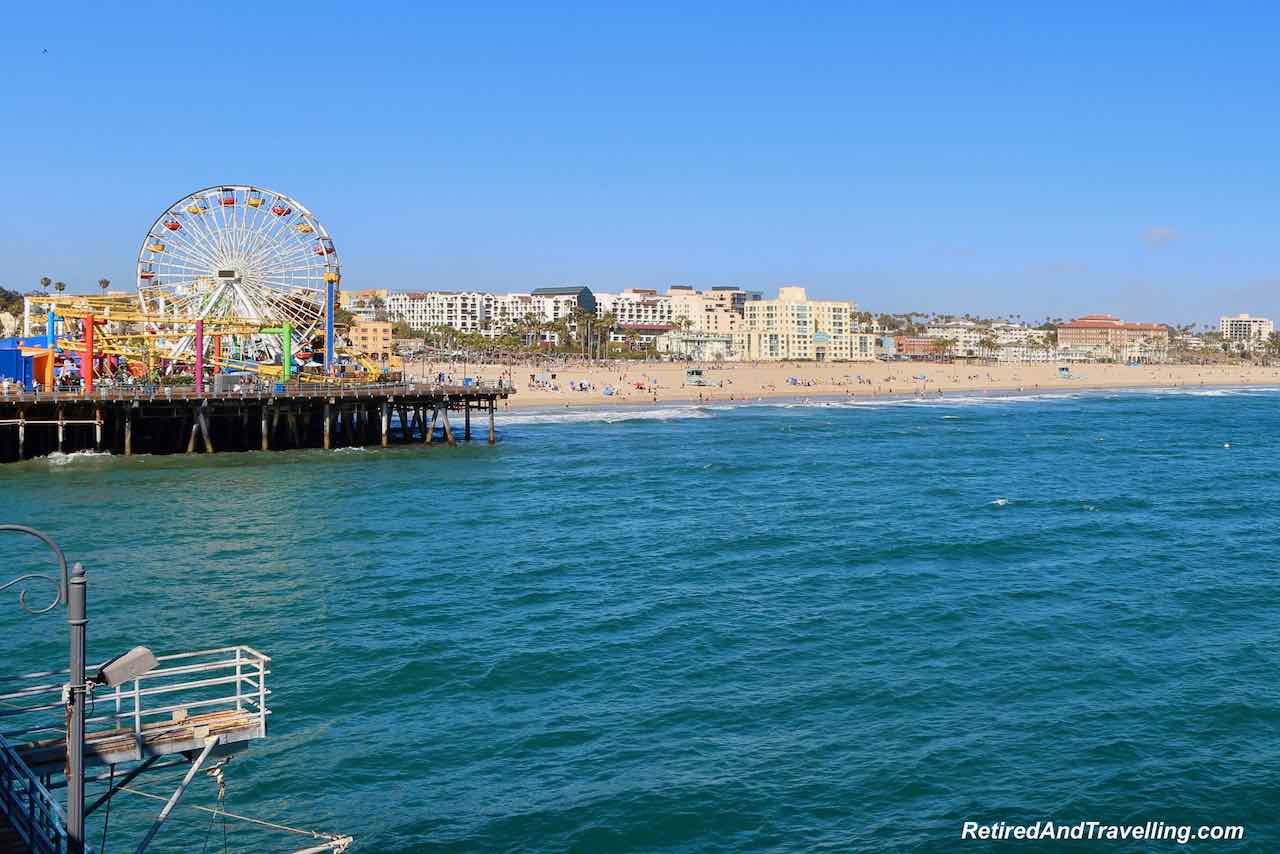 We were delighted when we found that we could experience dinner at the gourmet food trucks in the parking lot of the California Heritage a museum (Tuesday nights only). While there were lots of exotic choice, we stayed pretty white bread in our selections. It was quite an active spot.  People picnicked on the grass and enjoyed the blues wafting out from the restaurant beside the lot. 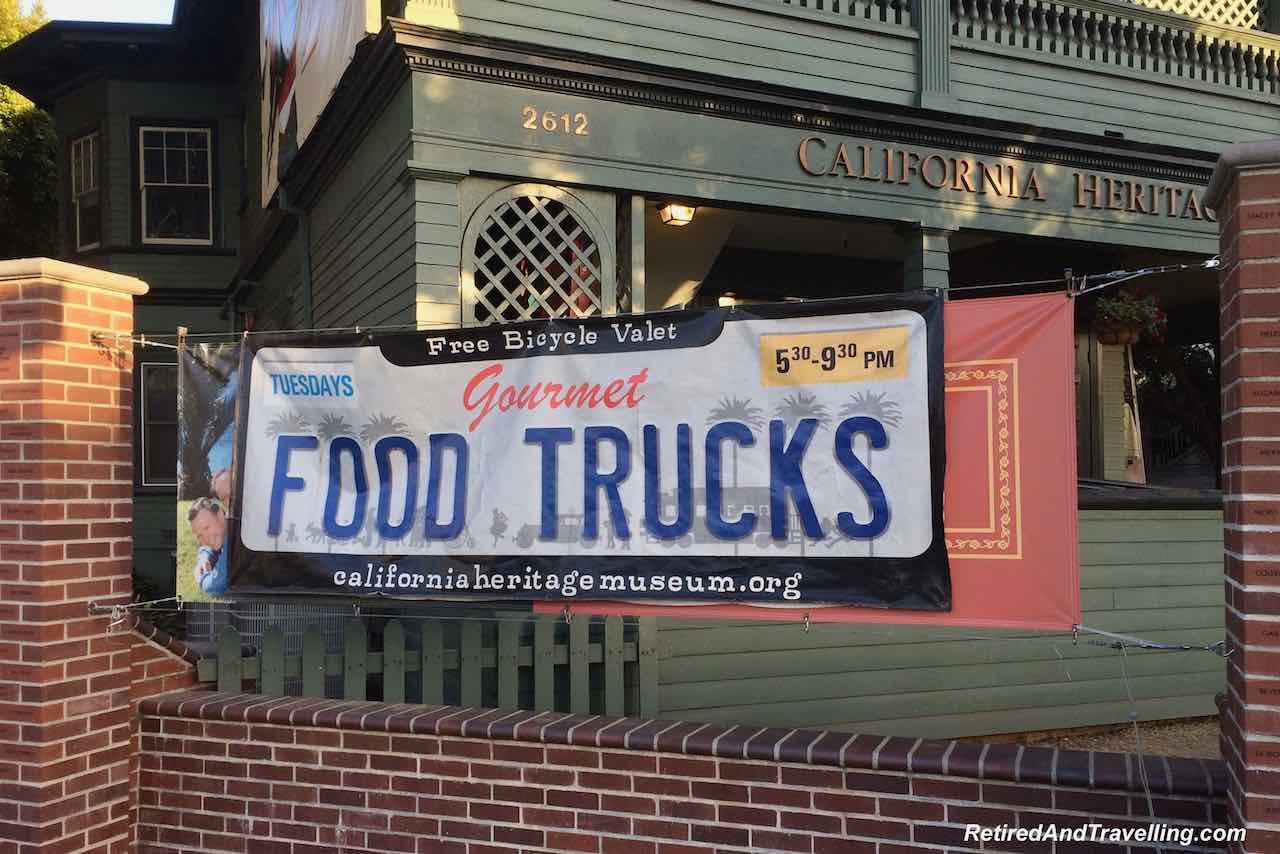 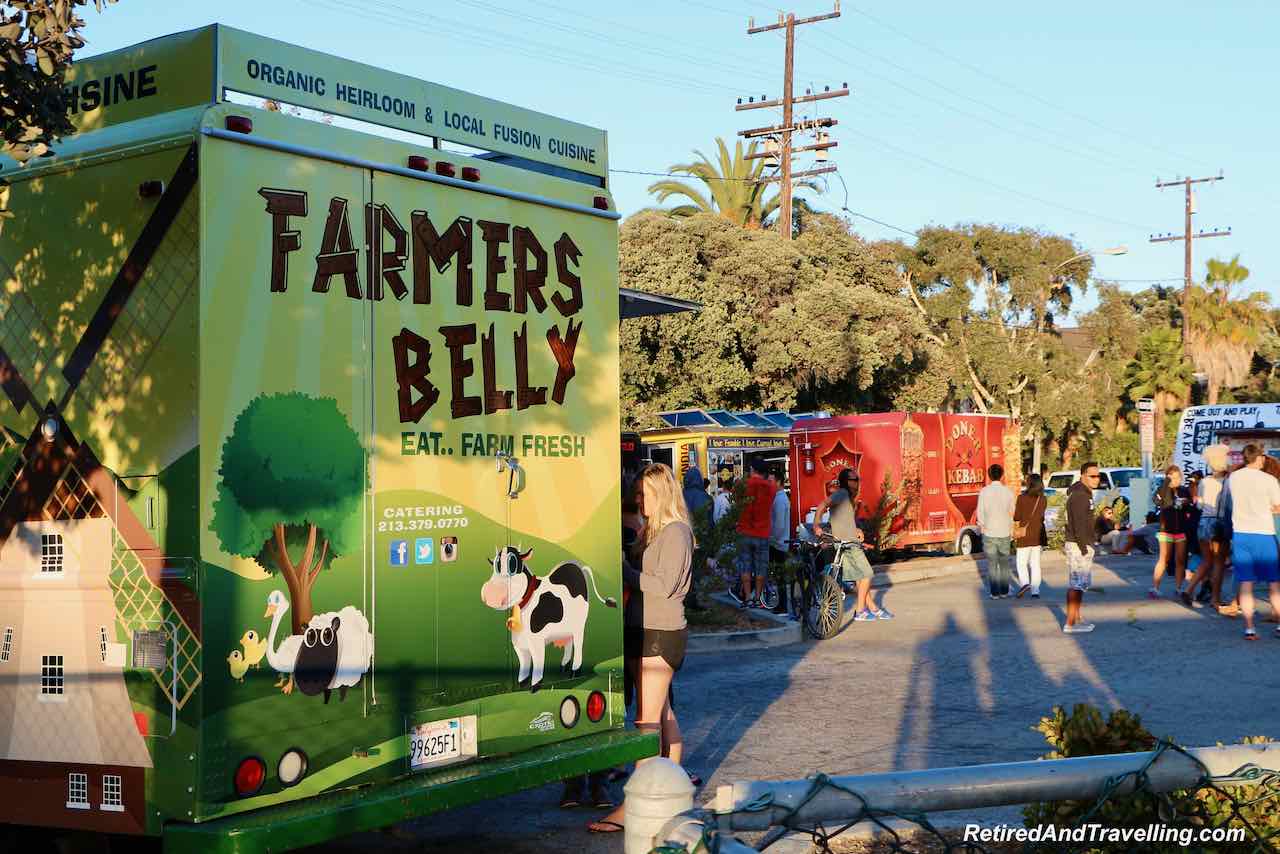 We finished dinner in time to return to walk along the water.  We saw the sun set behind the mountains.  And the amusement park lit up on the pier. 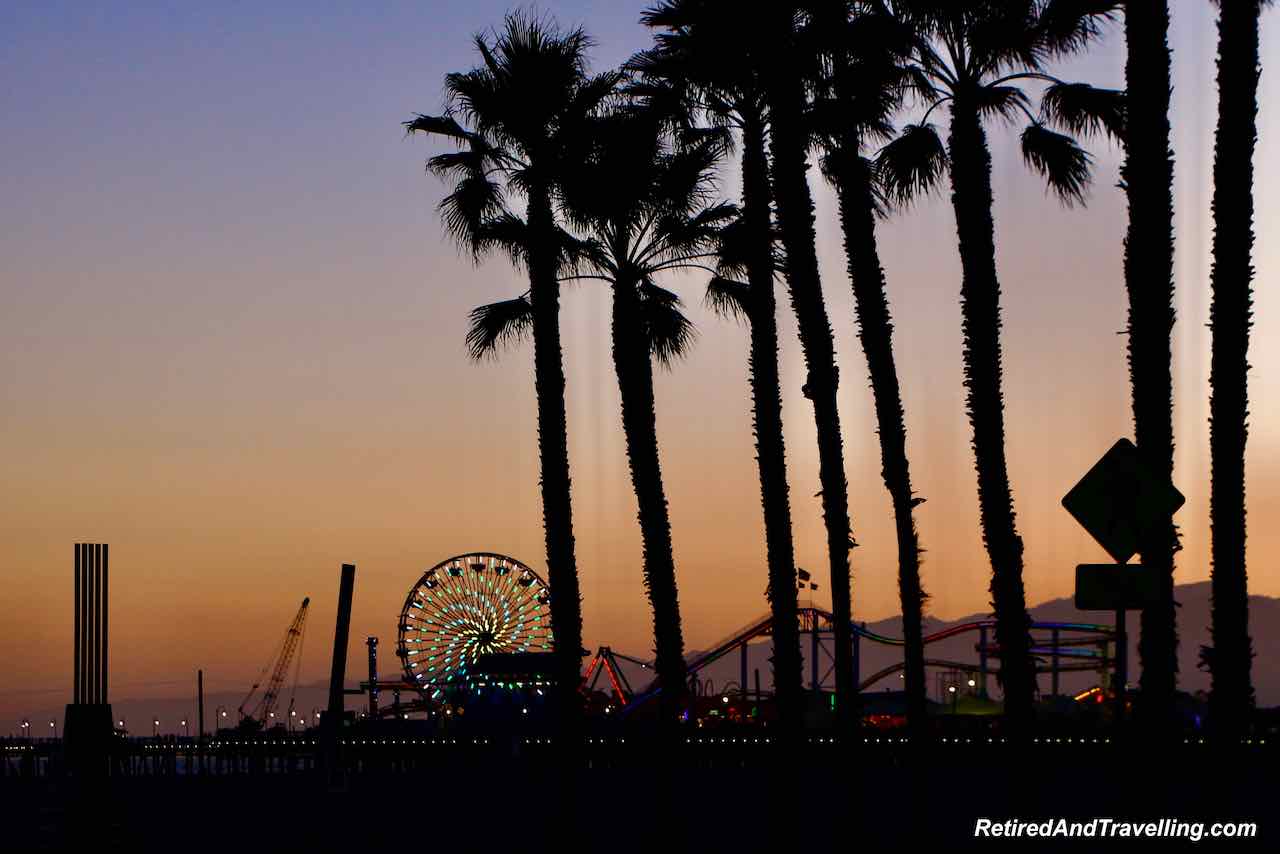 Biking To The Wild Side – Venice Beach

We had a blast bike riding in Santa Barbara.  So we reserved a designer bike at the hotel to ride along the beach to Venice Beach. They may have been designer bikes but they were very odd to ride.  So it would not be a long ride. Luckily there was lots to see as we walked the bikes back along the strip in Venice Beach. 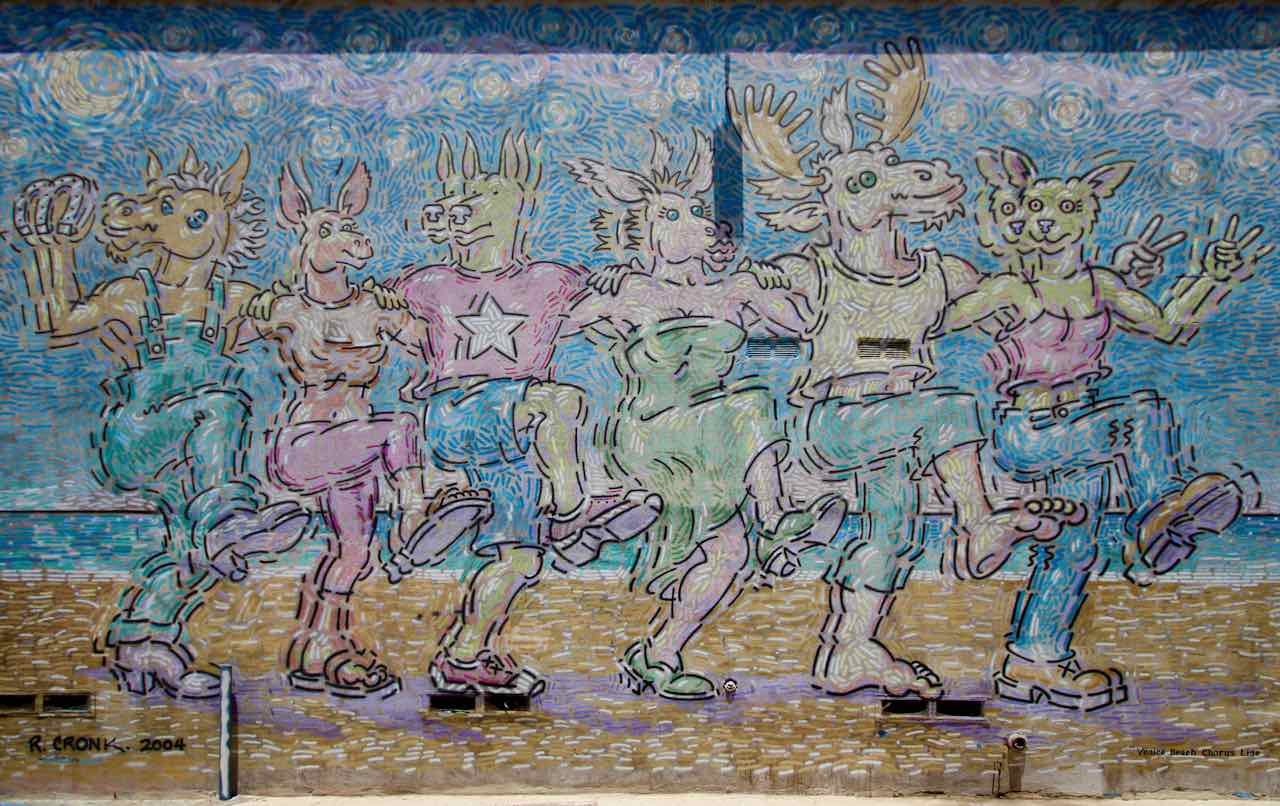 We kept our hand on our wallet and our eyes peeled and enjoyed the experience as we walked along the strip. Medical marijauna doctors popped up on every block that kept you legal.  But more shady deals happened as often. 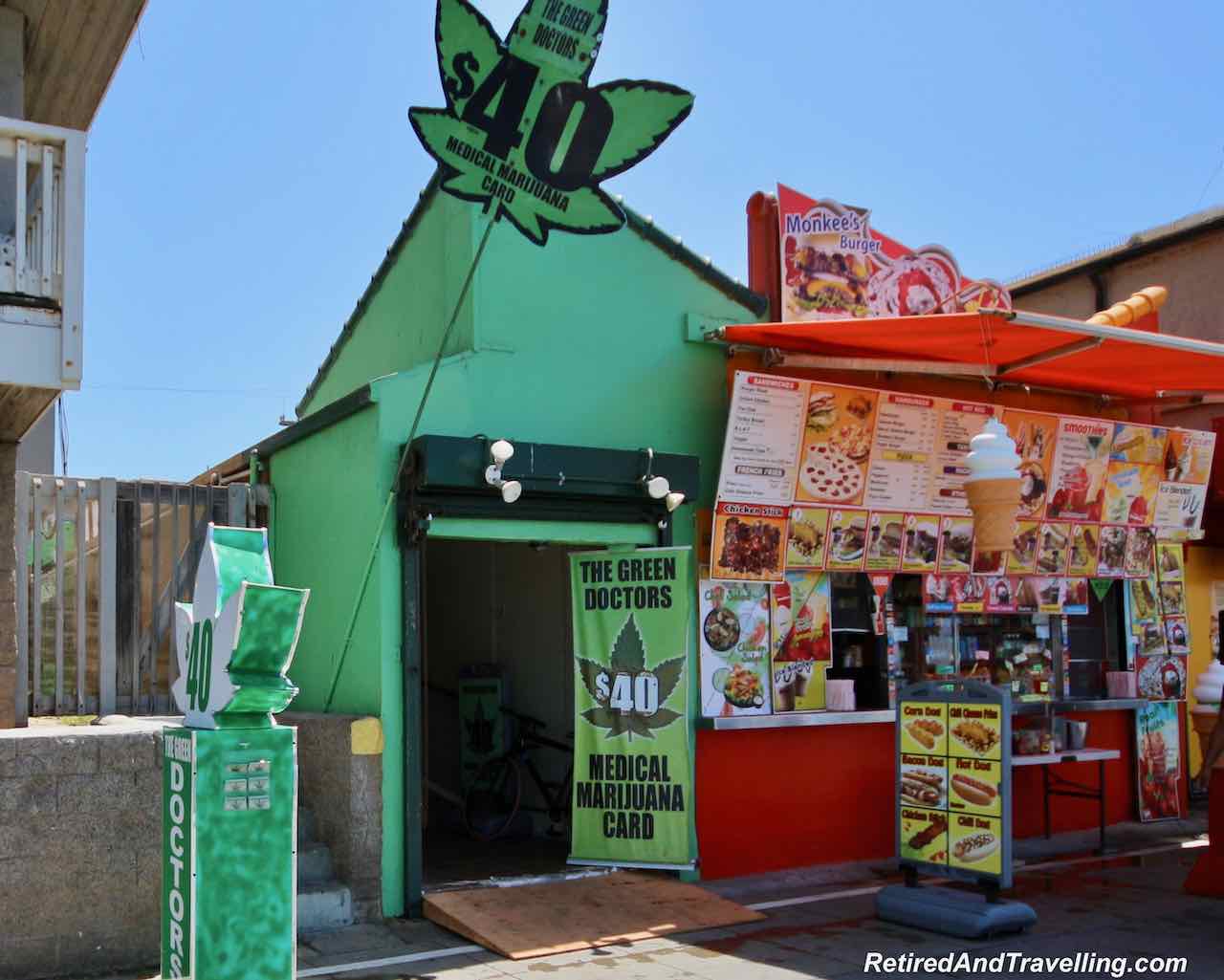 Tacky tourist stuff was found in every second store.  Several of the street people found innovative things to sell (belly rubs for the dog, pics with fake bar bells, etc). Muscle Beach was right in the middle with a workout ring.  And a promised bikini contest. It was disappointing at noon on a Wednesday, with no eye candy found anywhere. 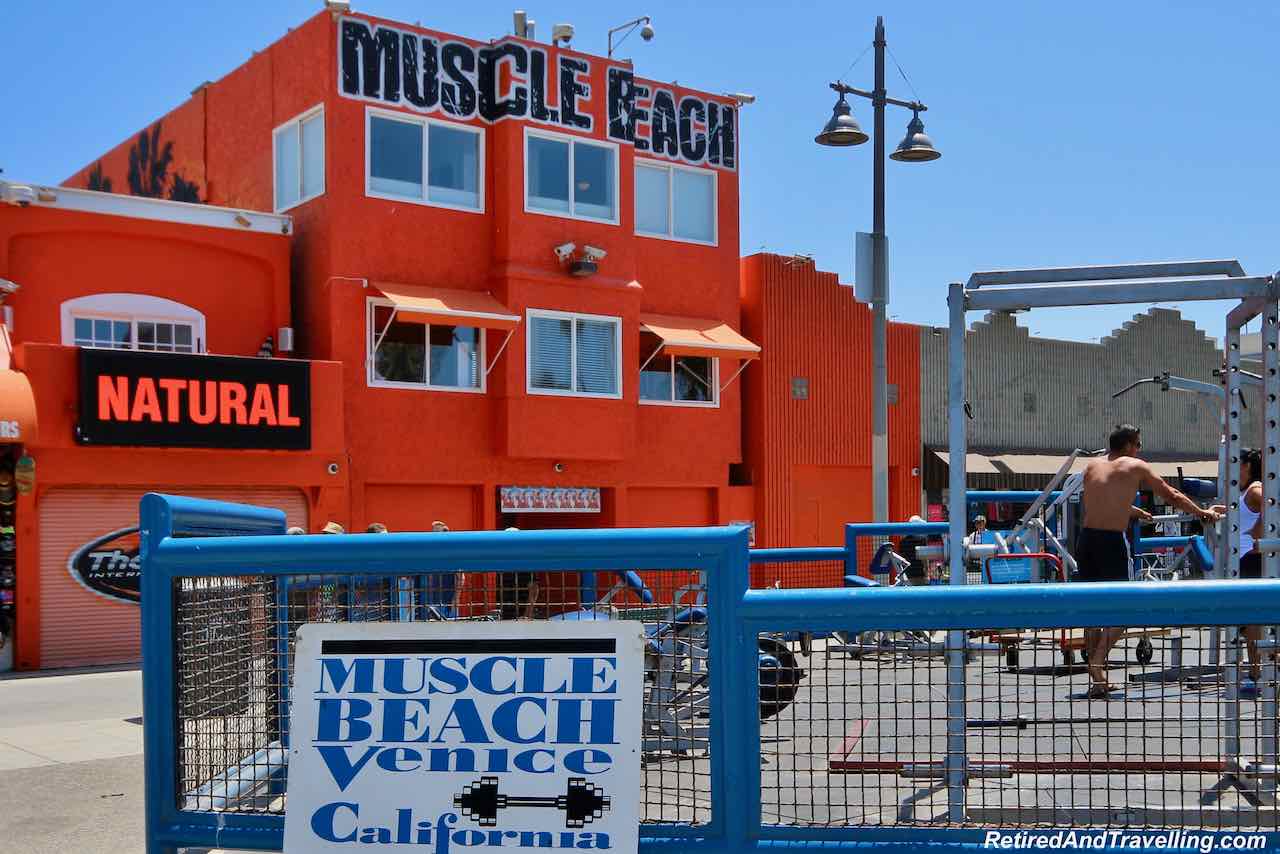 In Santa Monica outside LA, it was still an easy trip to see Hollywood.  Recovering the car in the afternoon, we played tourist and headed in the direction of Hollywood.  We were intent on seeing two iconic things – the Hollywood sign and Hollywood Bowl.

We navigated a meandering path and drove along all the familiar streets.  The signs for Hollywood & Vine, Sunset Boulevard, Melrose Avenue, La Brea, Mulholland Drive and Ventura Boulevard all seemed so familiar.

The road up to the Hollywood sign was closed.  But it was easy to find spots to get the picture. 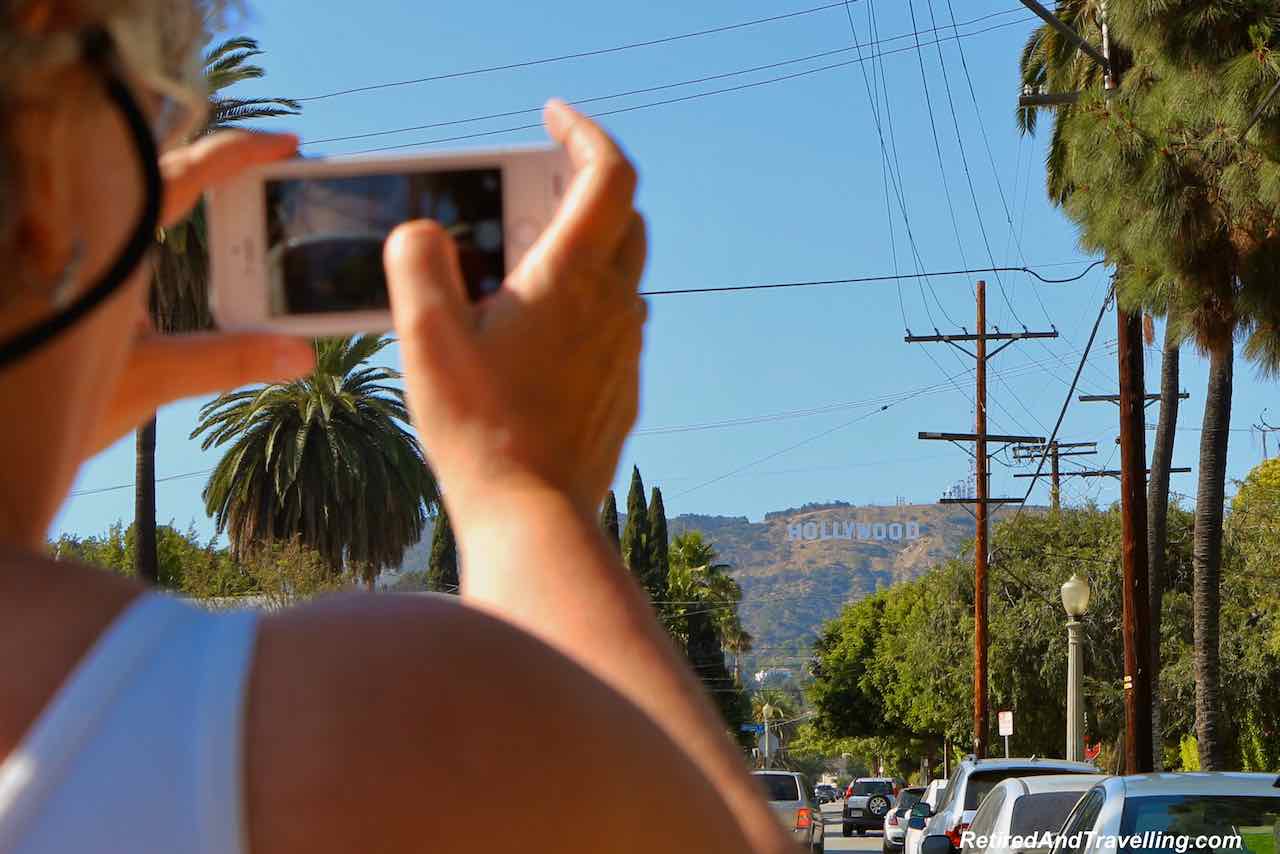 The Hollywood Bowl was open to tourists during the day.  When no show was on they will let you wander around. The venue was huge, holding over 18,000 people. It must be wild when a concert was on! 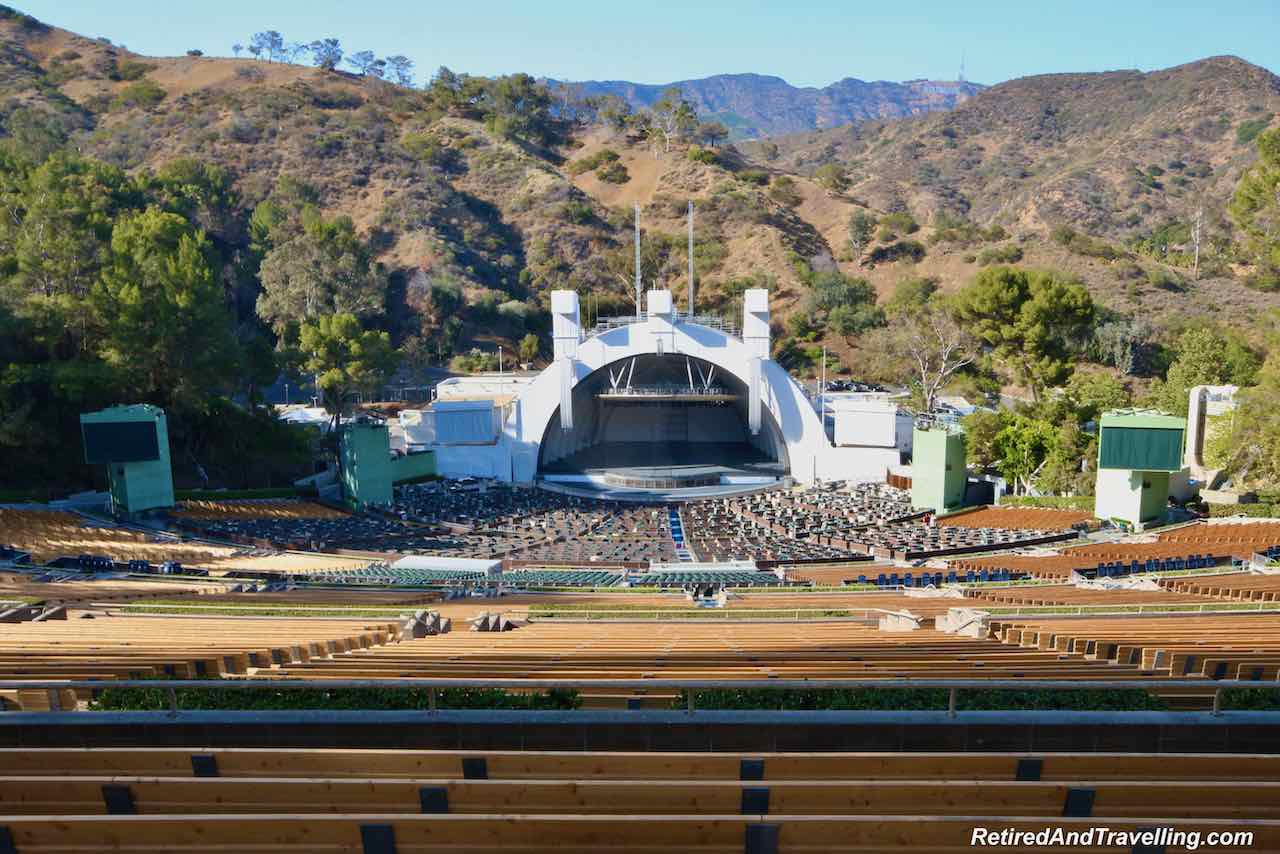 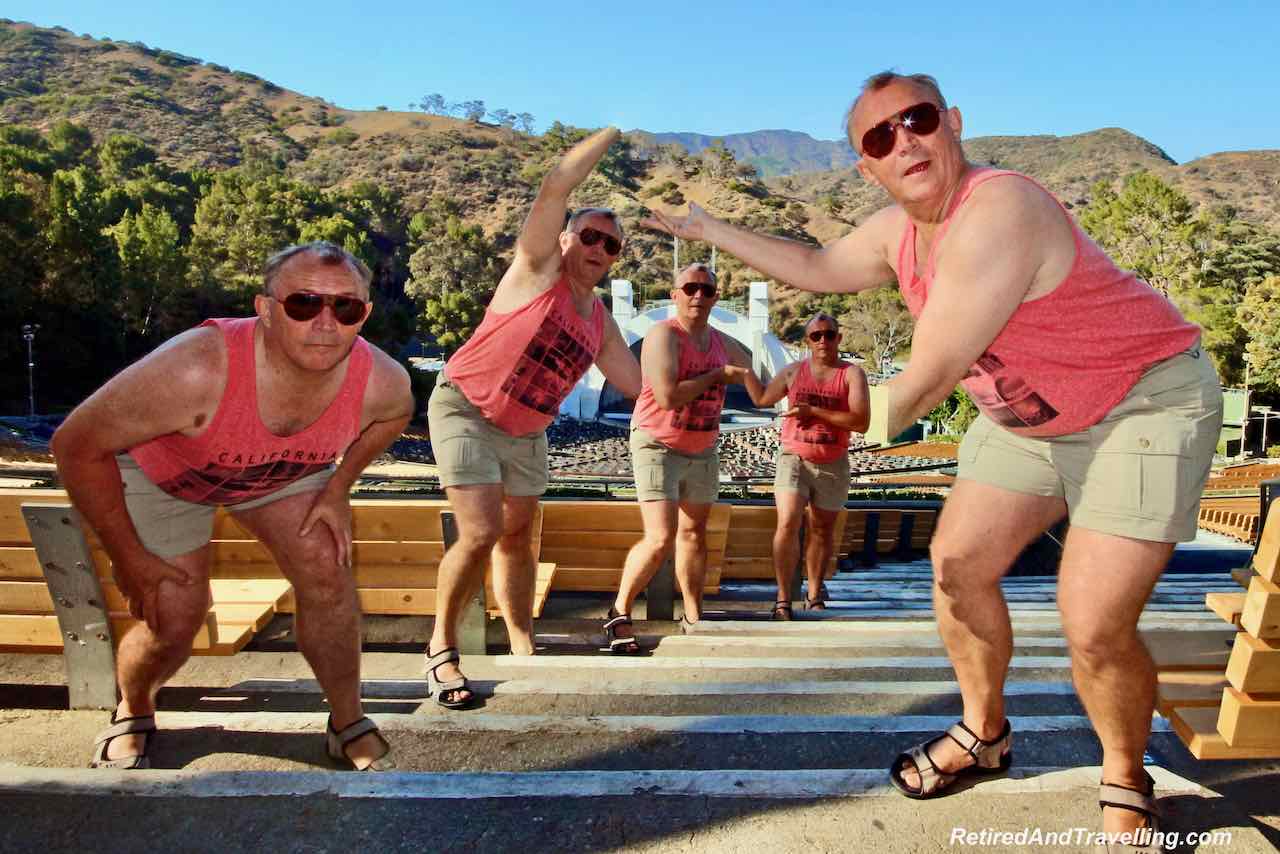 We were still undecided if we would be able to make it back for the opening night show. It you have the fortitude to walk up to the top sections, you can even see the Hollywood sign way off in the distance. David even did his own “happy dance” audition!

A Day in Downtown Santa Monica

In Santa Monica outside LA, we found all the shopping we could ever want!  Our final day was reserved to be a lazy day with some retail therapy.

When we finally got out, we headed for the short walk to the 3rd Street Promenade.  There were 3 blocks of mostly high end shopping.

We stumbled upon the large outdoor patio on the 3rd floor outside of Nordstom’s and by the food court. It offered a great combination of tables and comfy chairs with outdoor heaters for colder days. 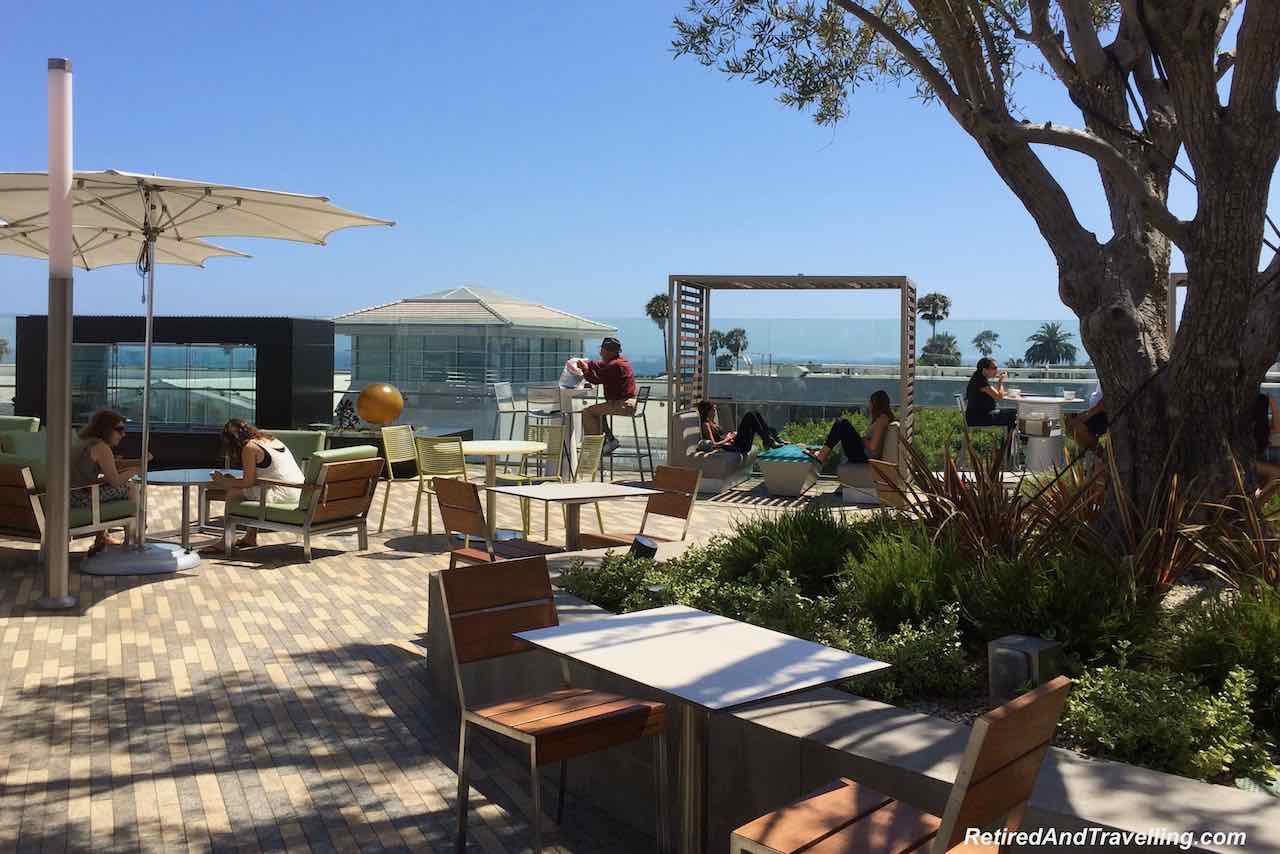 Our Hotel In Santa Monica

We enjoyed the experience of being close to the Santa Monica pier.  But the Viceroy Hotel would not likely make it on our return list.

While the bed was very good, the pillows were awful.  We quite shocked many of the guests as we marched in with pillows in hand. The fridge had to be emptied of expensive drinks and snacks so we could store our picnic supplies. And to add insult to injury they tried to charge us for bar fridge contents.

While the hotel coffee was very good, it was only available in the bar until about 10am. There was no in room coffee maker, which we really missed for our before bed tea.

The pool was nice and the hotel was generally quiet.  Until they held an event in the pool area that got louder each hour until it shut down at 10pm leaving my ears pounding. I was really glad we rejected the first room right over the pool.  Or I would have been insisting on an upgrade to the sea view to escape the party sounds. Our little 3 star hotel in Santa Barbara offered much more bang for the buck. 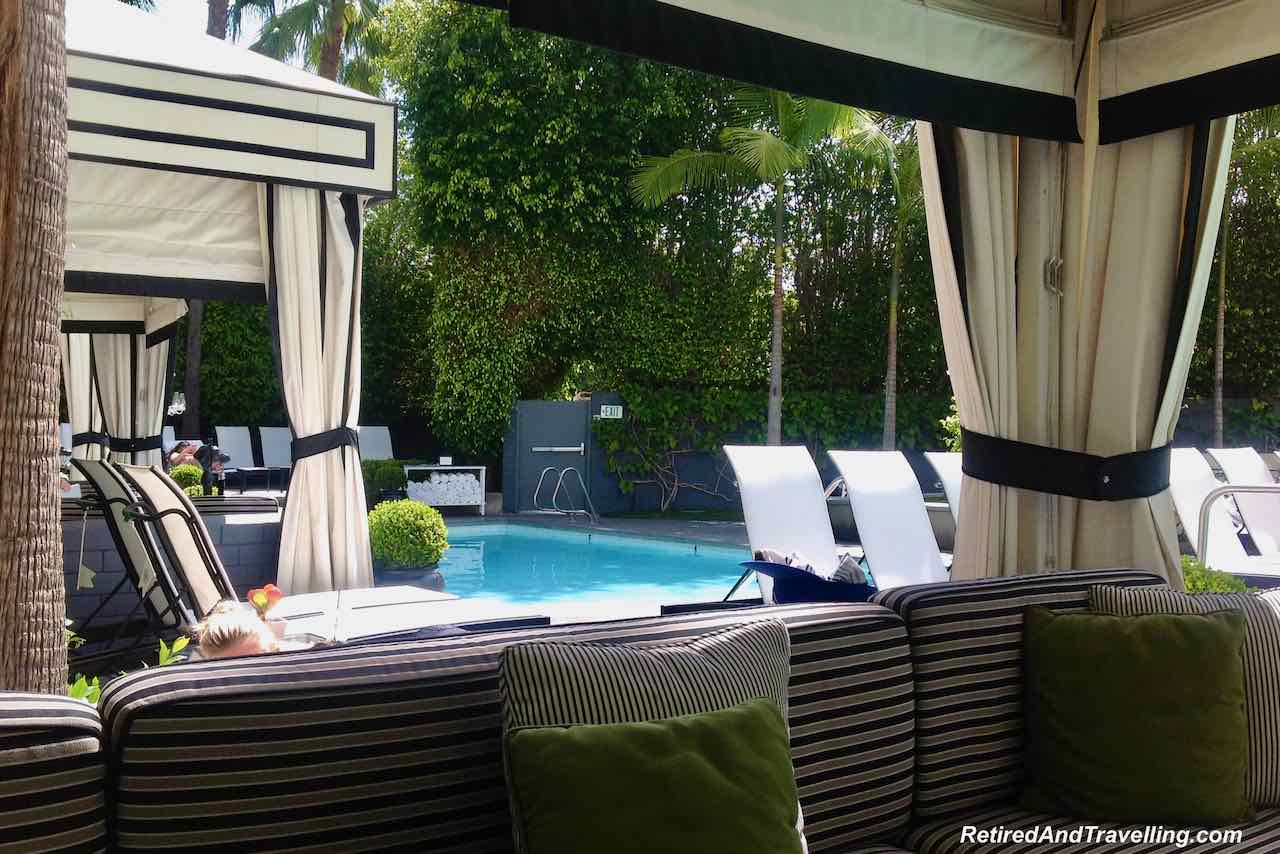 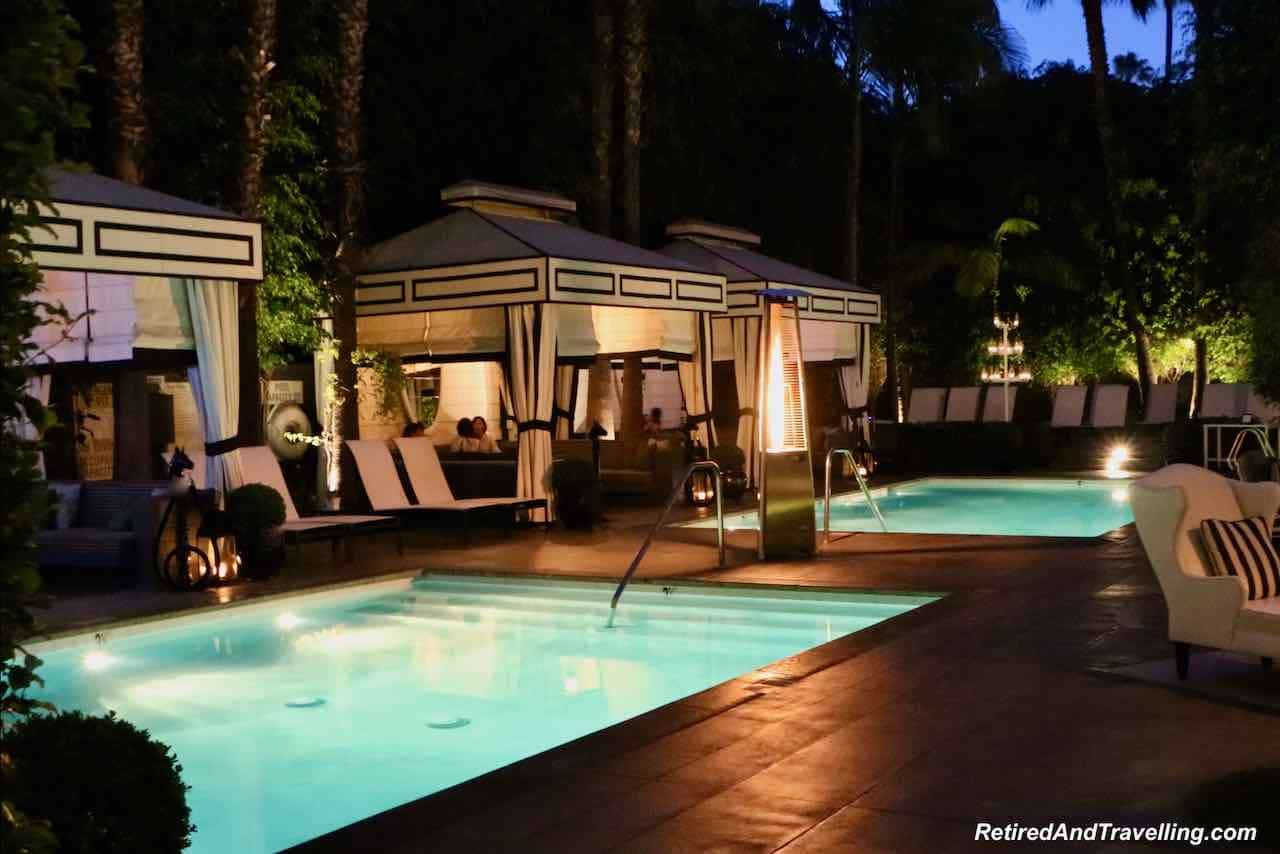 We ate at no place really of note when we were in Santa Monica outside LA.  We either ate on the run at a local joint or we picniced in our room. One of our best meals was salads from the salad bar at Whole Foods. It felt like we hadn’t had real veggies in weeks so we filled our boxes. David indulged in all the kale and beets he never got at home. And I filled my box with fresh strawberries and spinach.

A Short Stay In Santa Monica Outside LA

On our last night we picniced in our room on wine, cheese, fruit, nuts and chocolate.  We were content to not wander out for another walk. It was easy to pack since our trip was just a quick run across town to our next stay in Newport Beach.

Would you go back to Santa Monica outside LA? Wait until you hear how much more we enjoyed Newport Beach!   Tell us why we are wrong …. 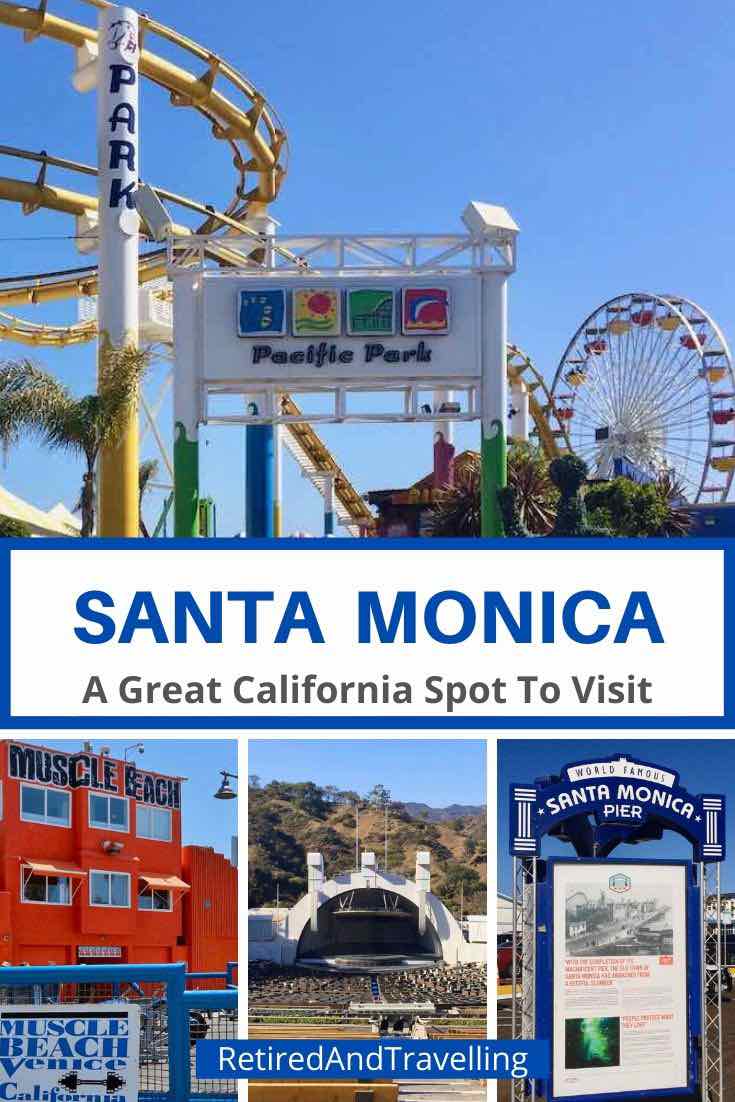 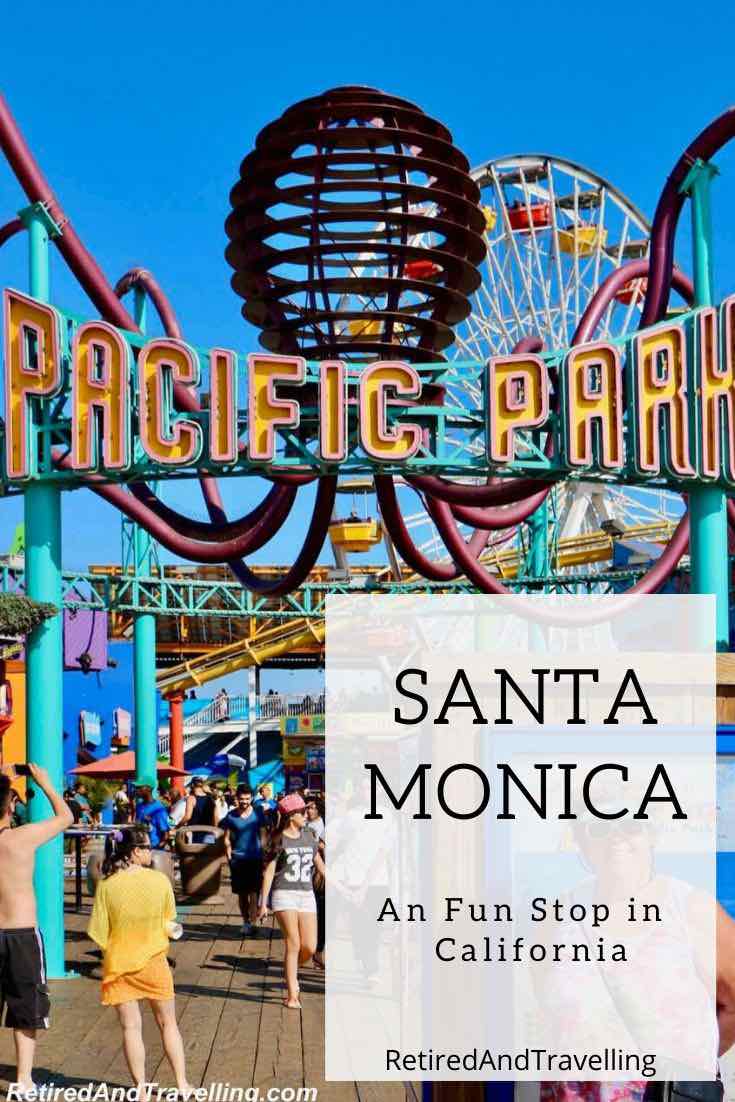 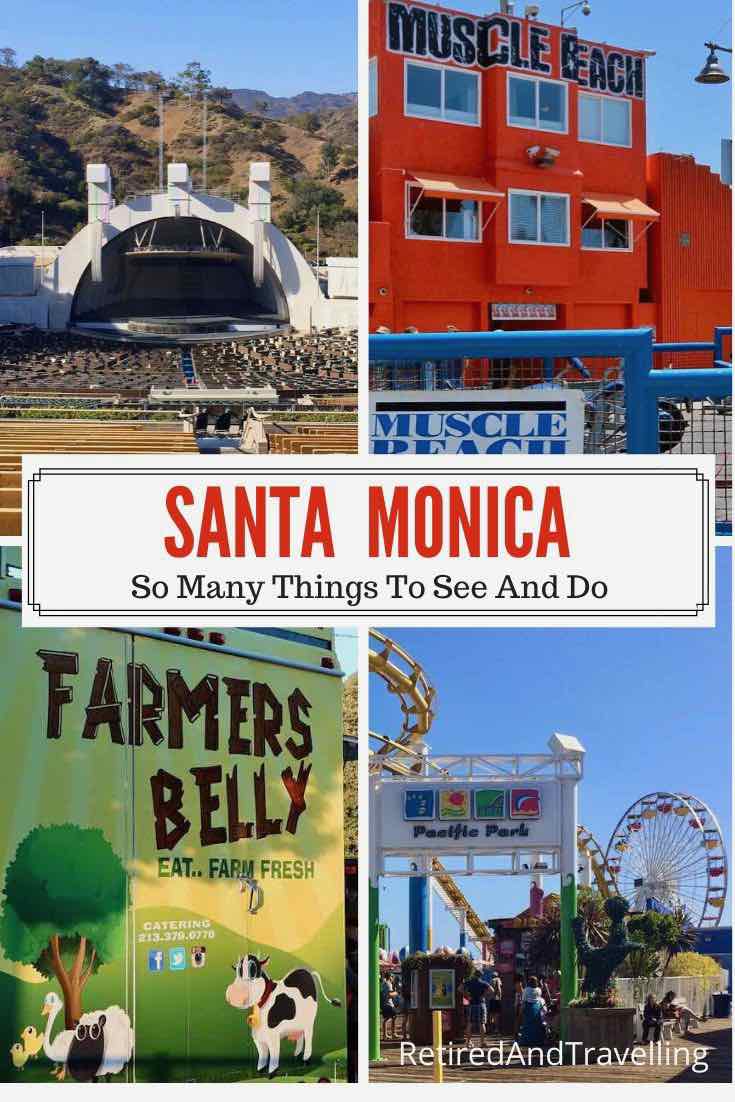