We Headed To The Yangtze River

We started our cruise of the Yangtze River with Viking Cruises in the river city of Wuhan. Our first stop for a day trip was in Jingzhou. But then we hit the upper reaches to cruise the Three Gorges on the Yangtze River for two days. We passed through such beautiful scenery as we traversed the gorges.

We did first one dam and lock. And then we visited the massive Three Gorges Dam. Our nighttime transit through the locks was beautiful. 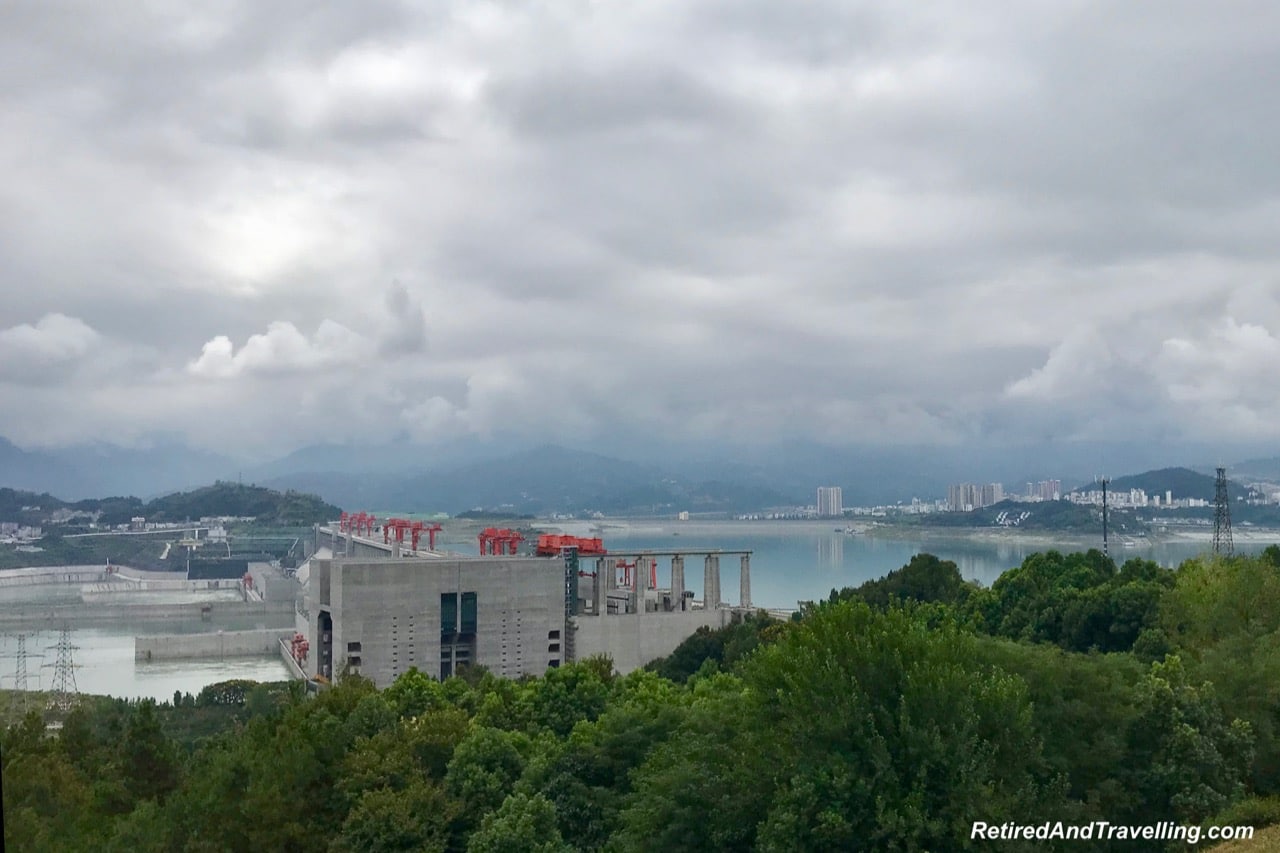 If you don’t cruise the Yangtze, make sure to visit and see the Three Gorges area.

Some of the most lovely scenery we passed on the whole cruise portion of our trip in China was through the Three Gorges on the Yangtze River. The first Xilang Gorge we travelled was the biggest. It was nearly 50 miles long and much wider than the other gorges. The river was wide and a mud coloured when we started out. Over the days, it grew greener and clearer. It was a busy water route. Boats of all kinds and sizes moved up and down the river. 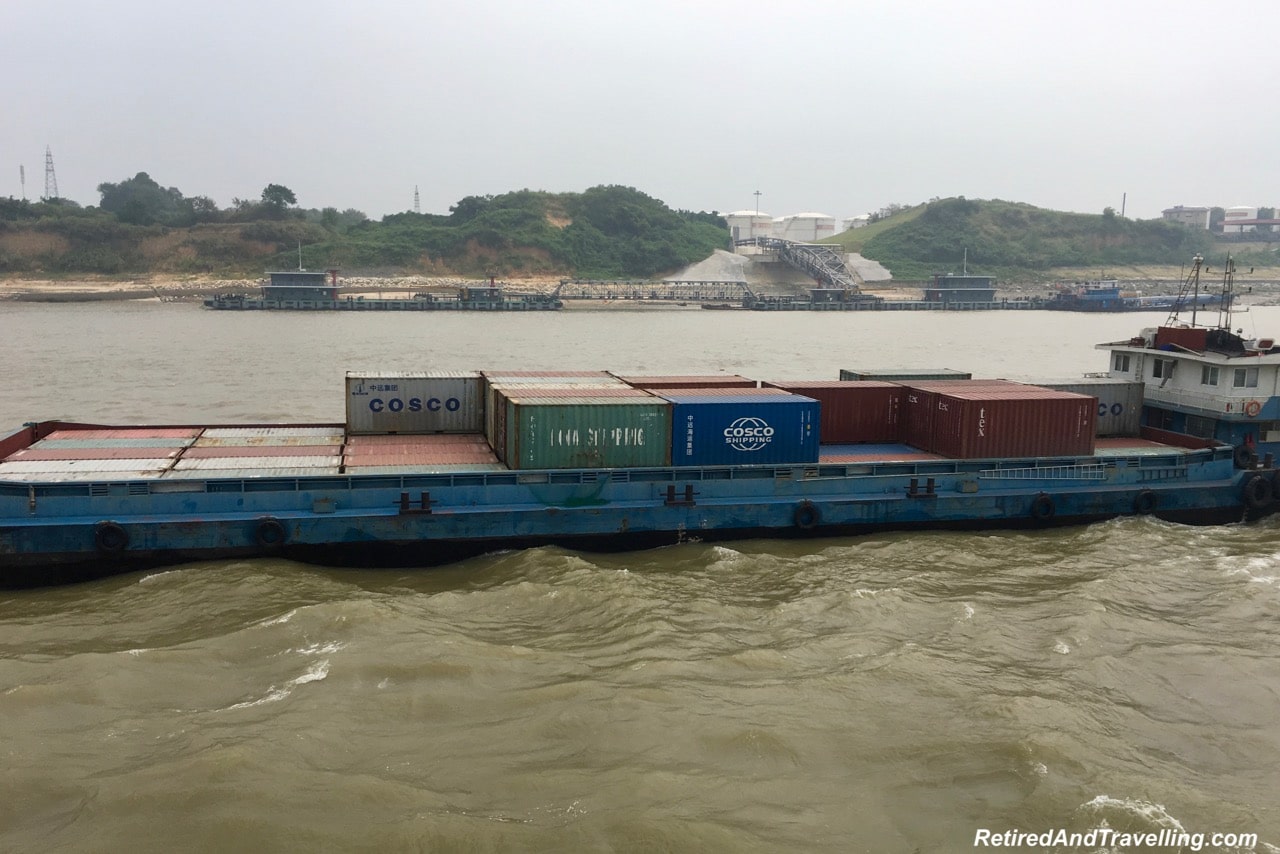 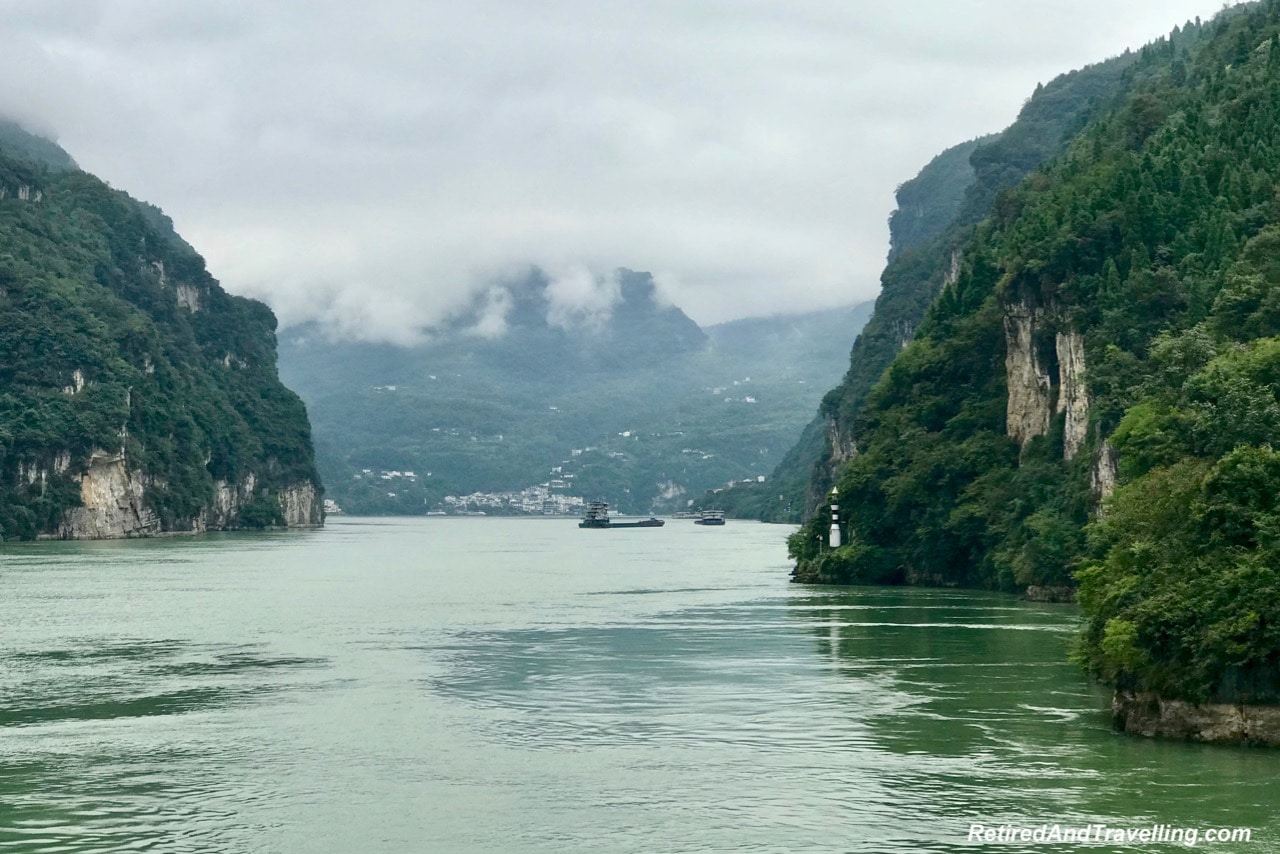 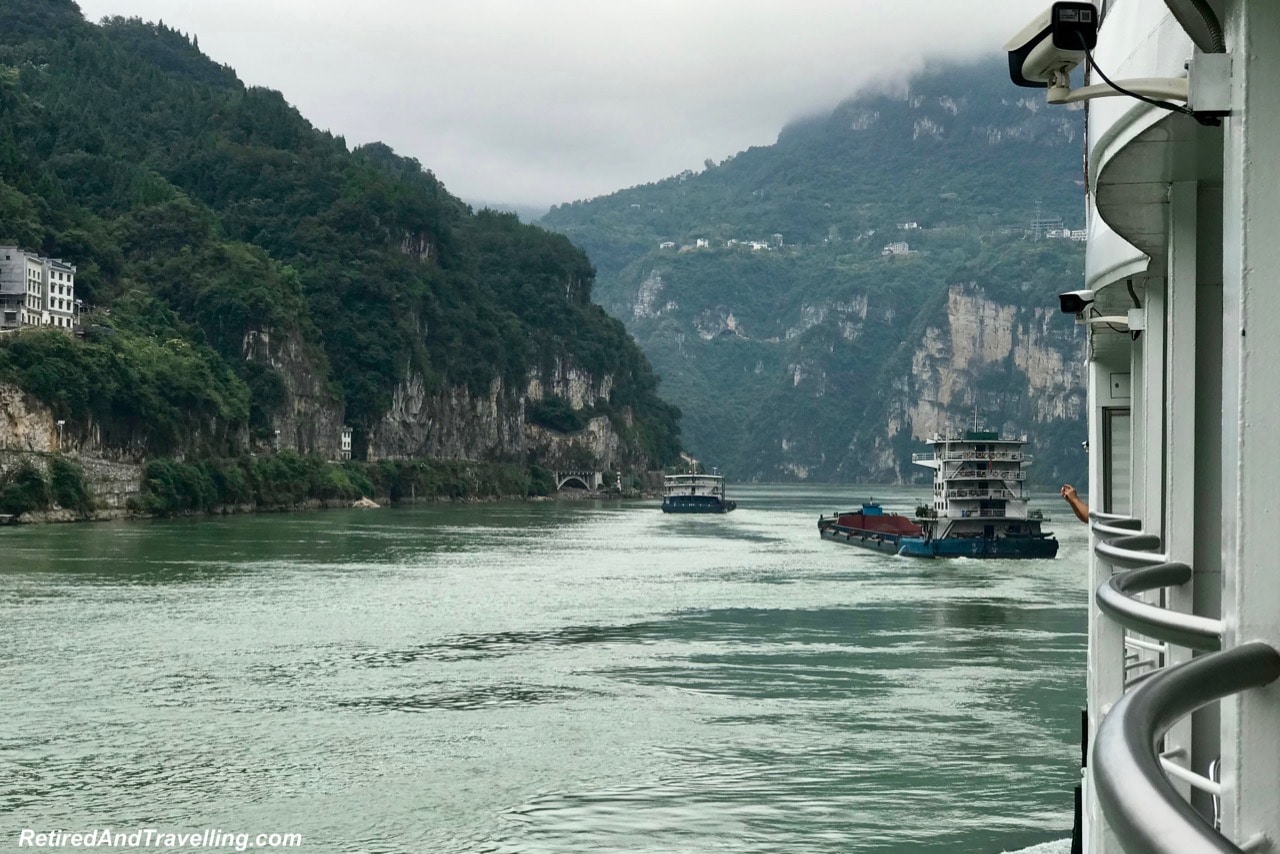 The scenery was very green and verdant. We saw the trees as they just started to turn colour. Interesting buildings showed up on the shore as we watched. Rock outcroppings stood out with the layers striated. We passed by small villages and local people on the water. 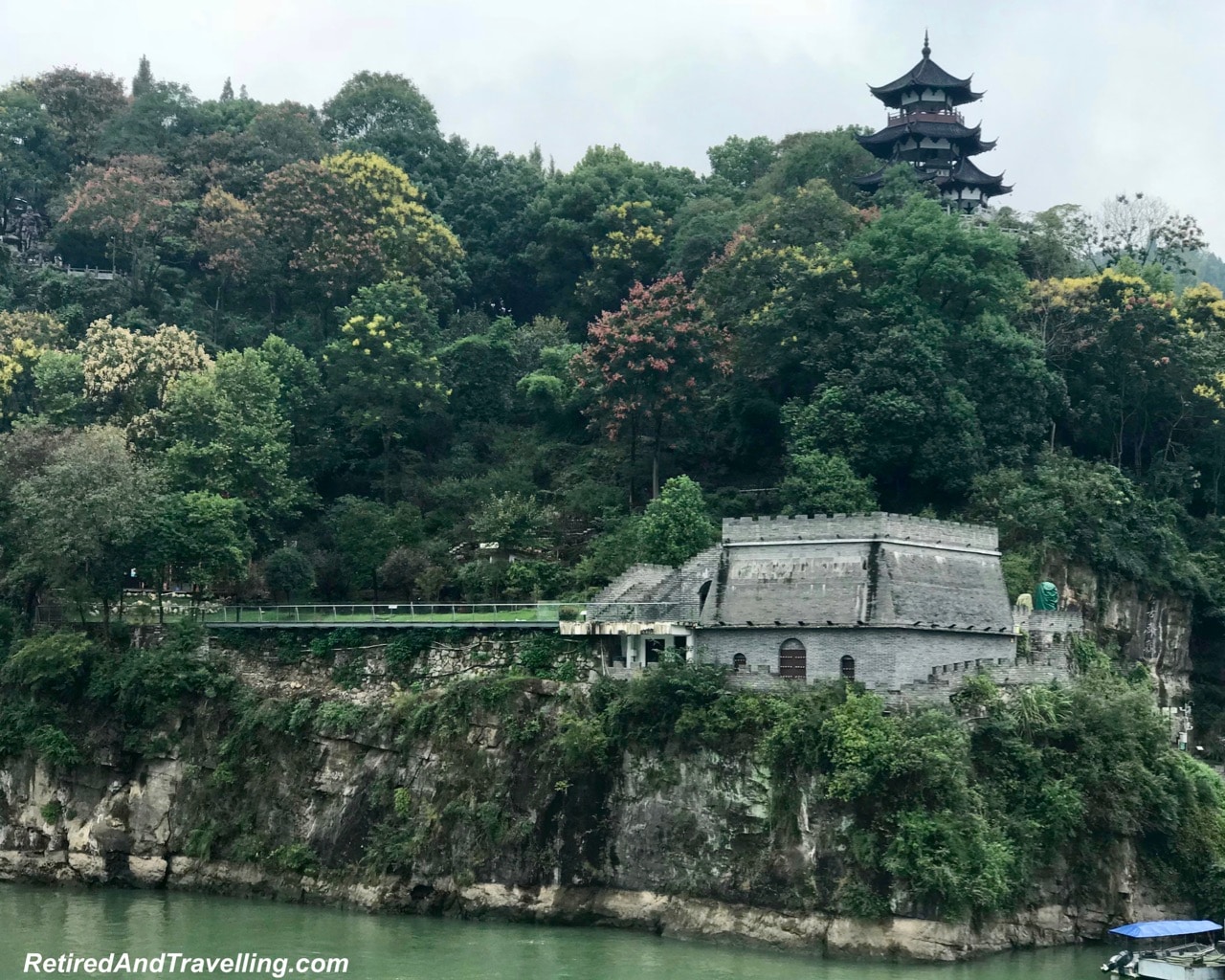 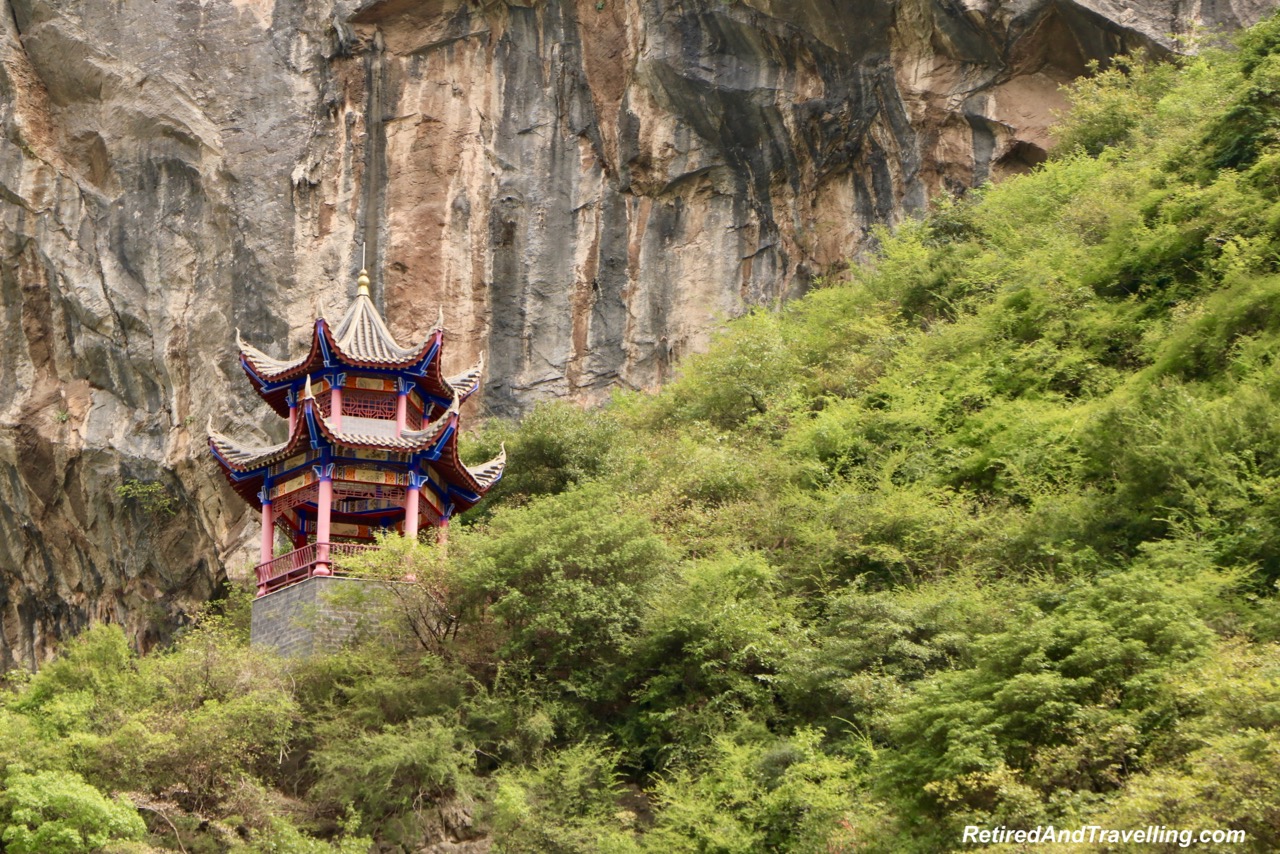 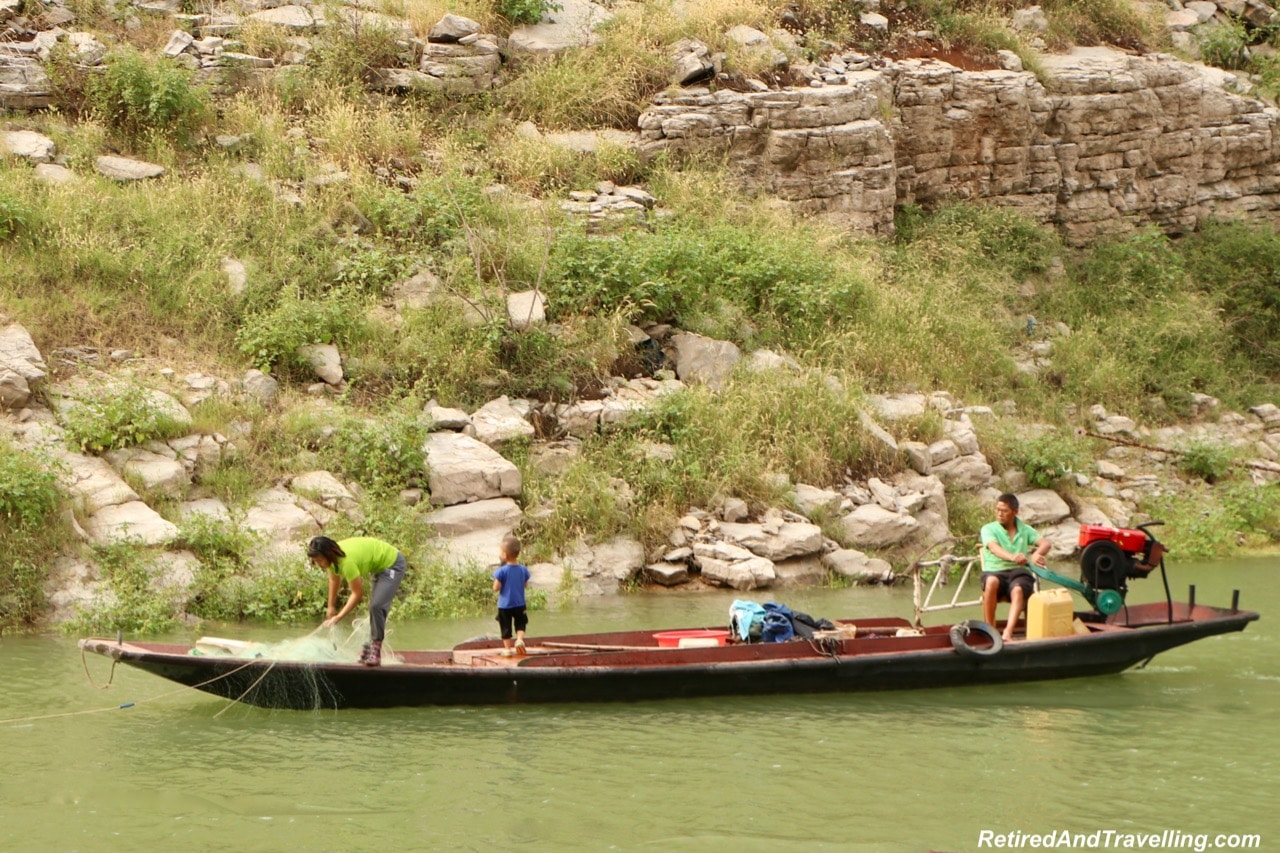 There was a river guide on the upper deck that narrated for us as we moved through the Three Gorges on the Yangtze River. We were told to watch for the section of the river where the pagodas covered the slopes of the rock. 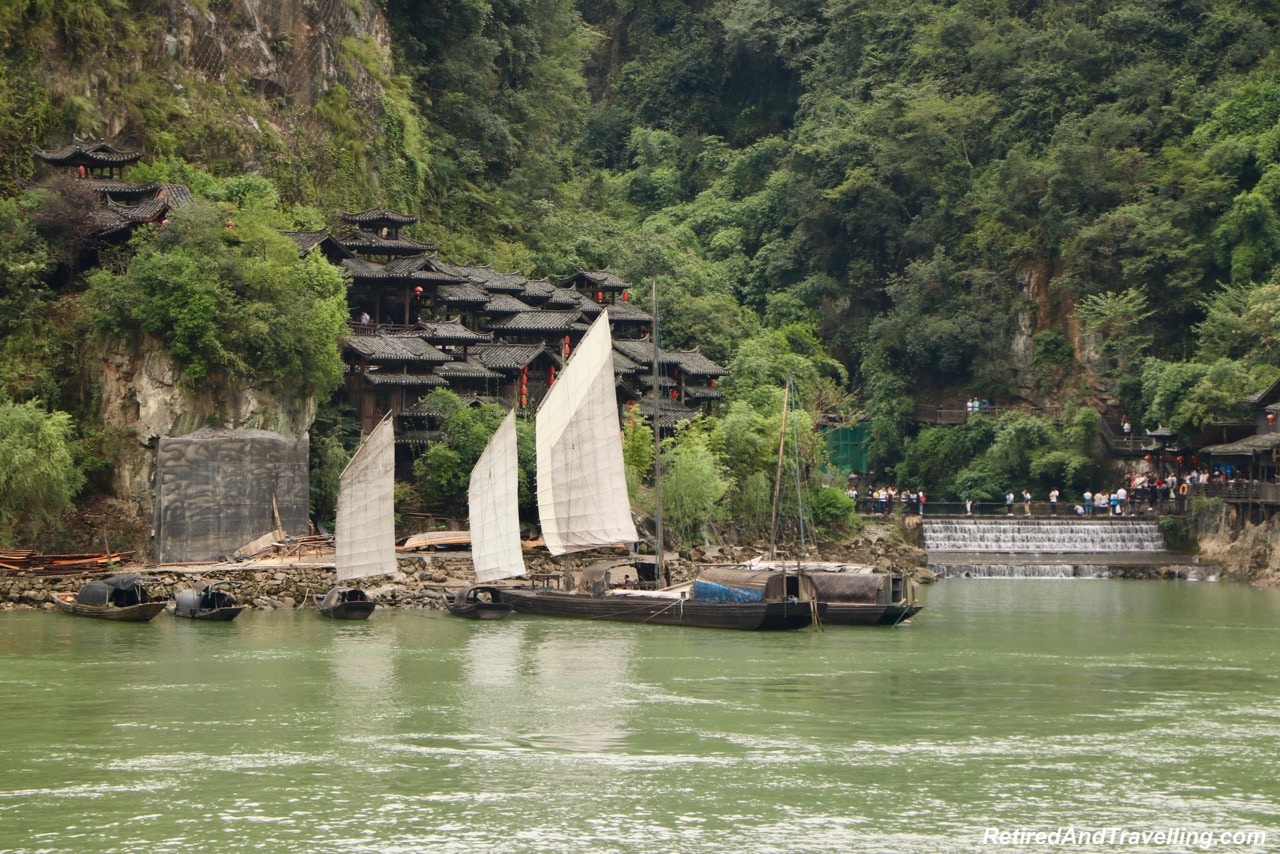 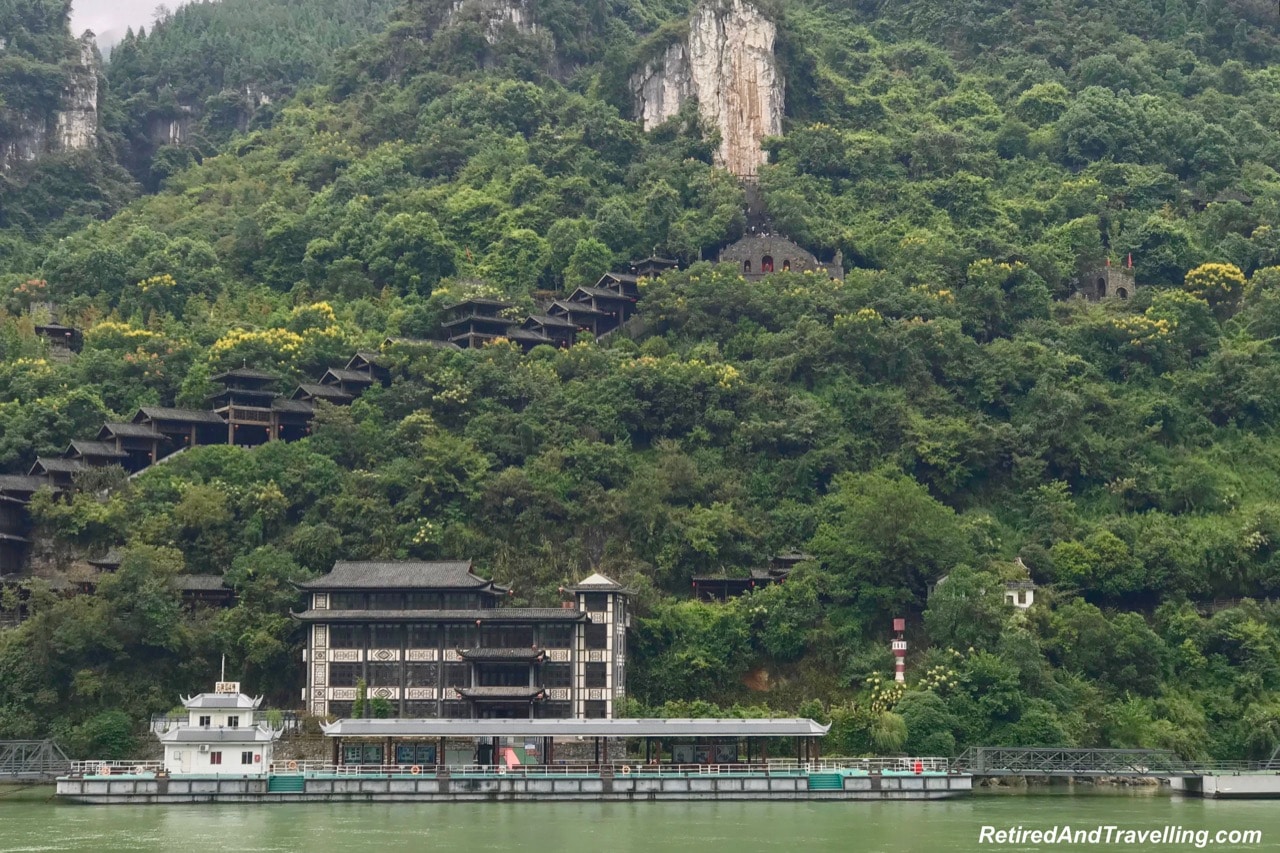 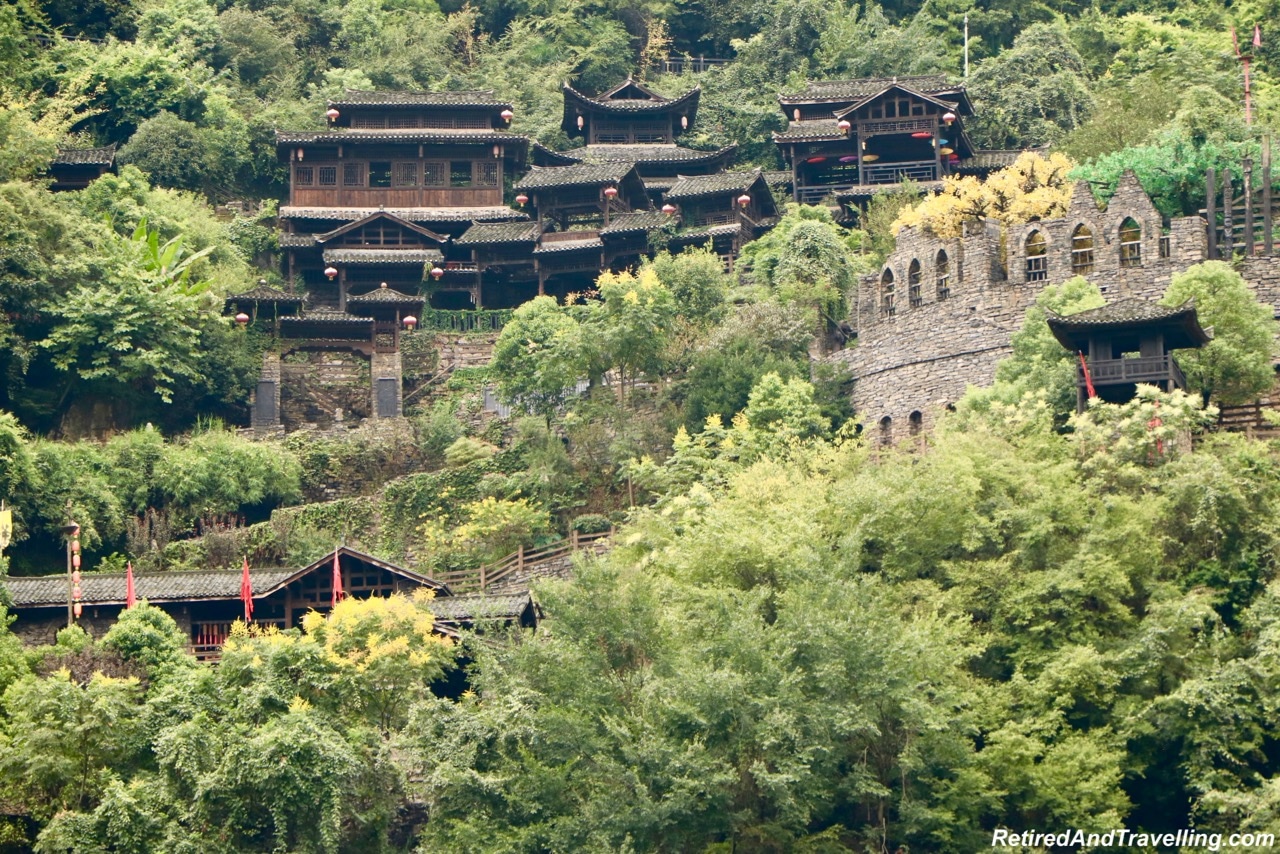 We finally hit the small town of Sandouping. At this point, we left the ship to visit the Three Gorges Dam.

Cruising Through The Wu Gorge On The Second Day

After our visit to the Three Gorges Dam, our trip along the Three Gorges on the Yangtze River was not yet done. We had two more gorges left. The Wu Gorge is also know as the “Witches” Gorge. It was 25 miles long. The sides provided us with views of towering peaks. The mist was heavy first thing in the morning. It took a few hours for the mist to leave the upper reaches. 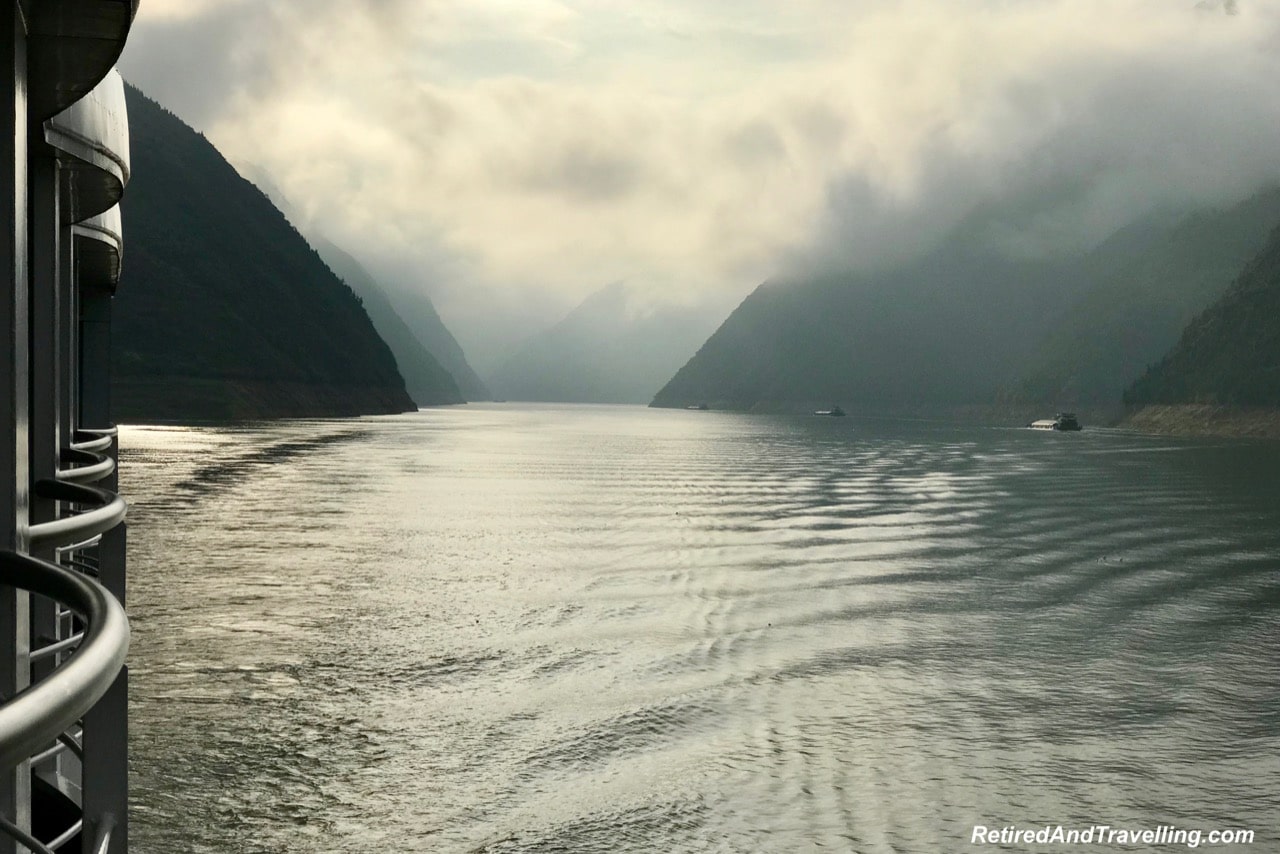 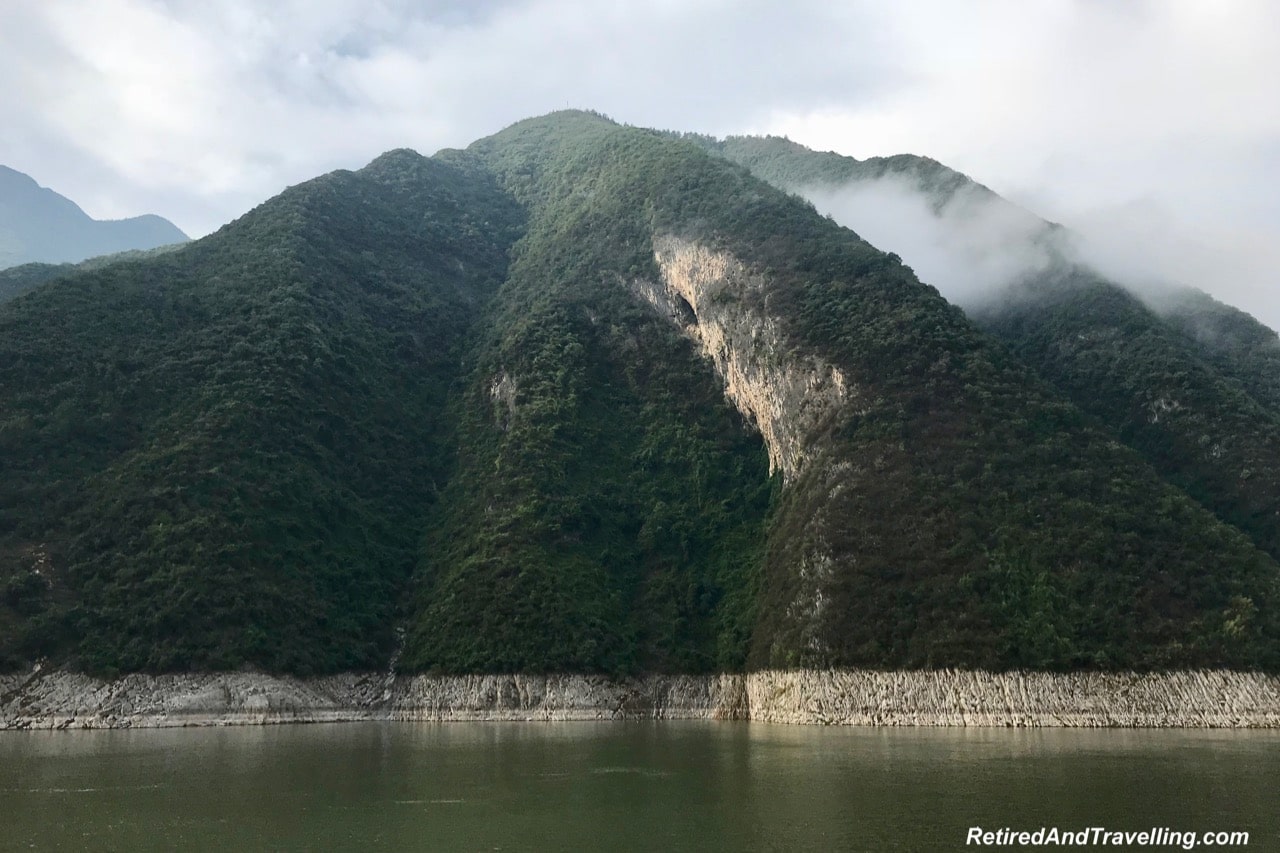 As the day warmed, most of the mist disappeared. The hills flattened out just a little. And we could see terraced fields going up. Every now and then there were goats on the rocks. 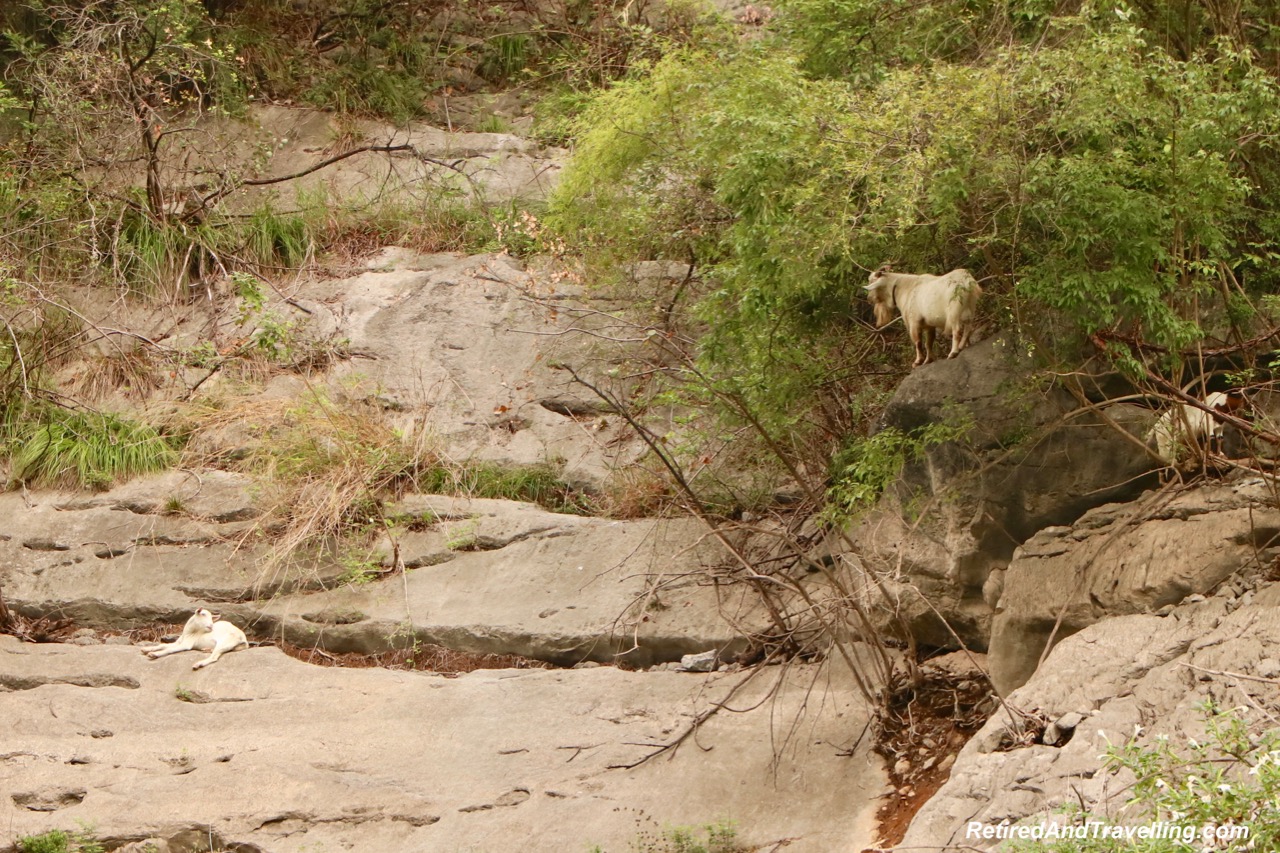 Most of the towns we saw were smaller towns up in the hills. At one point we passed the much larger city of Wushan. We got our first glimpse through the red arched bridge that crossed the river. We saw that all of the towns were relatively new. And figured these were all the new settlements created for the displaced locals. 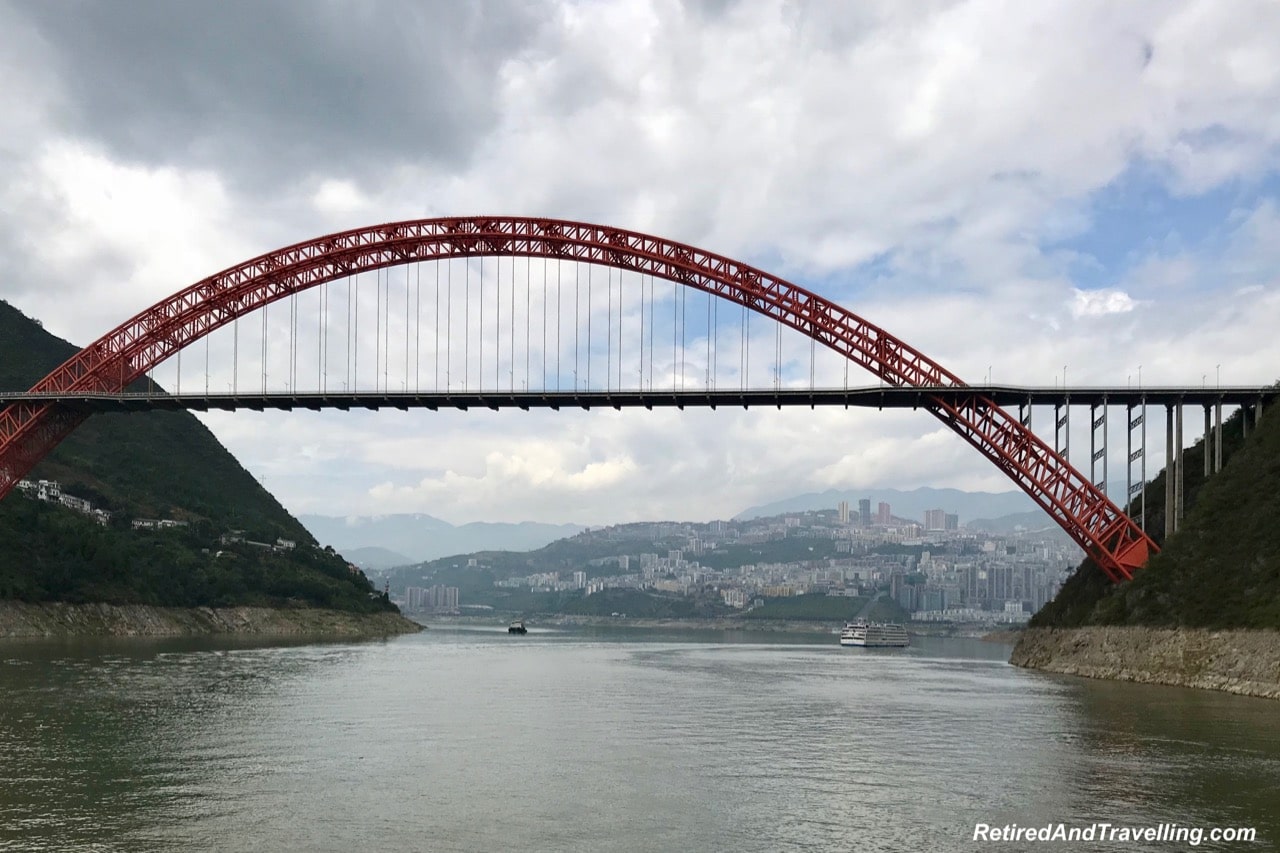 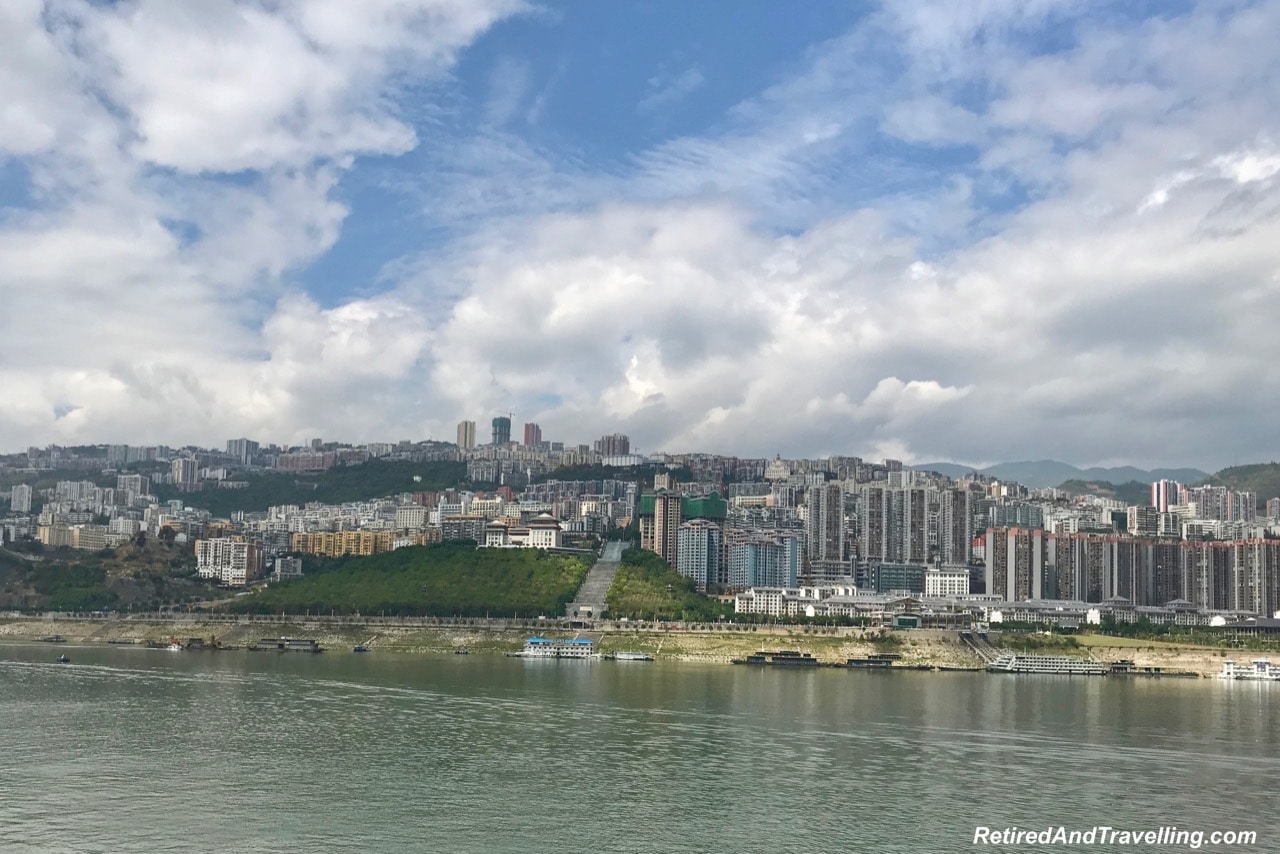 It was fascinating to see how the gorges changed as we cruised along the Three Gorges on the Yangtze River.

Finishing Up On The Qutang Gorge

The smallest and narrowest of the gorges was the Qutang Gorge (or the Kui Gorge) at about 5 miles long. Huge rock faces towered above us as we slowly move through. Our cruise ship took up a good part of the channel. 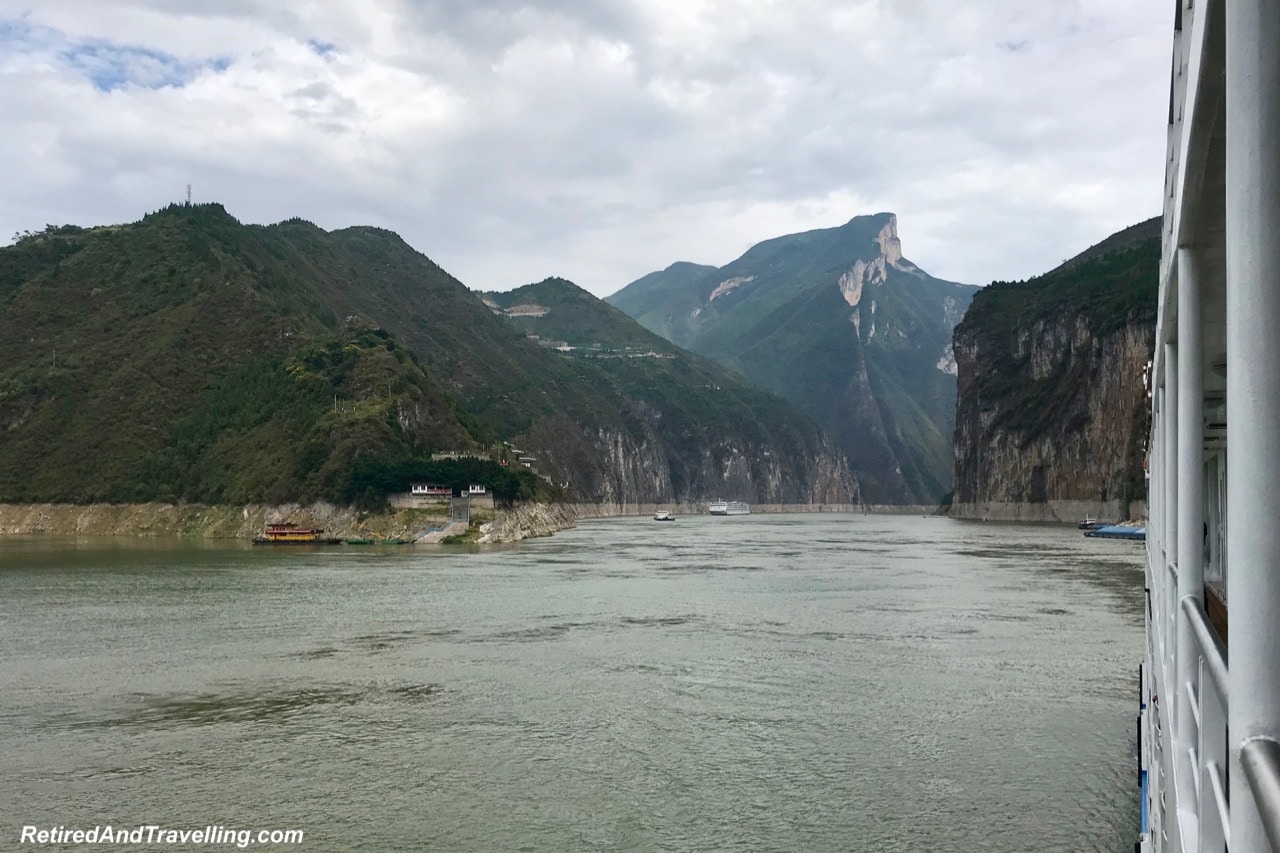 We spent much of our second day cruising through Three Gorges on the Yangtze River just watching the scenery go by. At times we sat on our balcony. At other times we went on the upper deck and listened to the local guide. 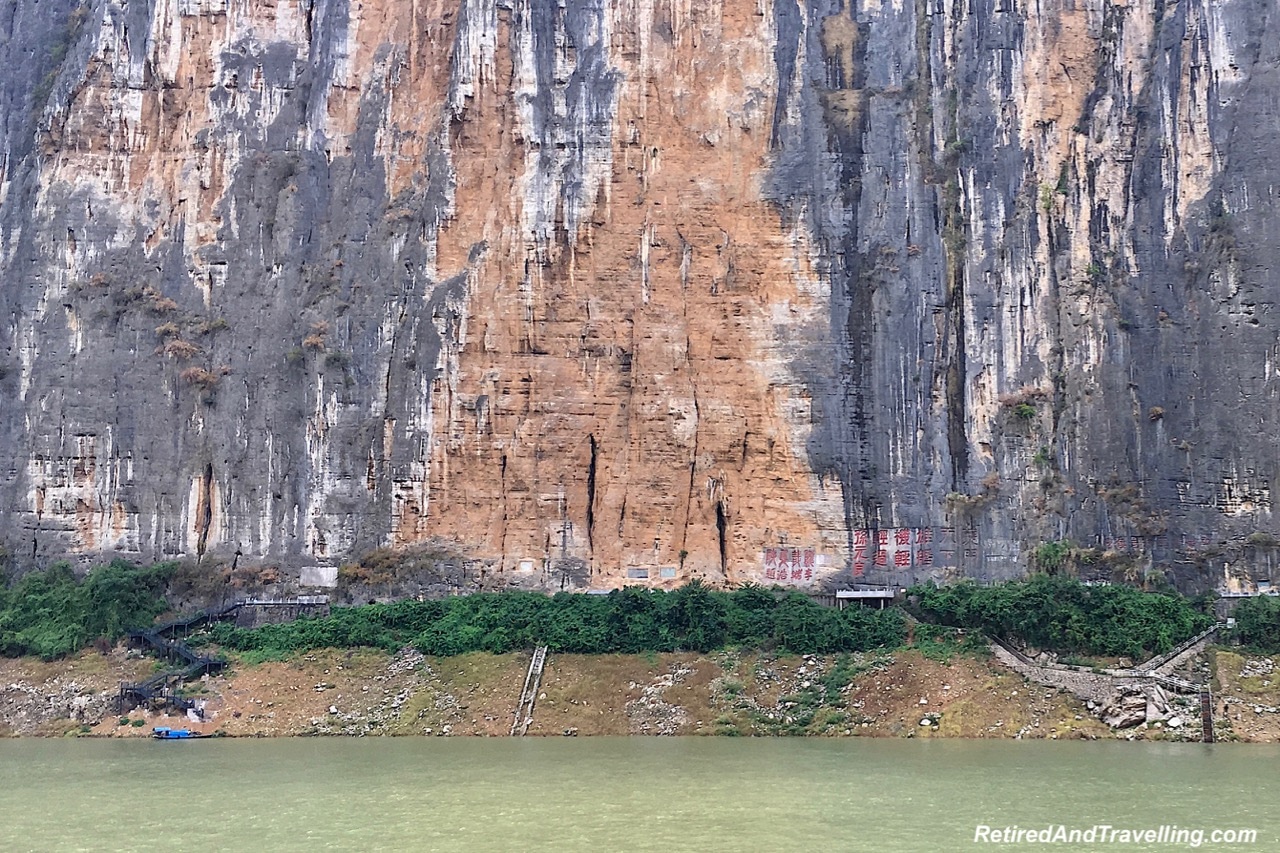 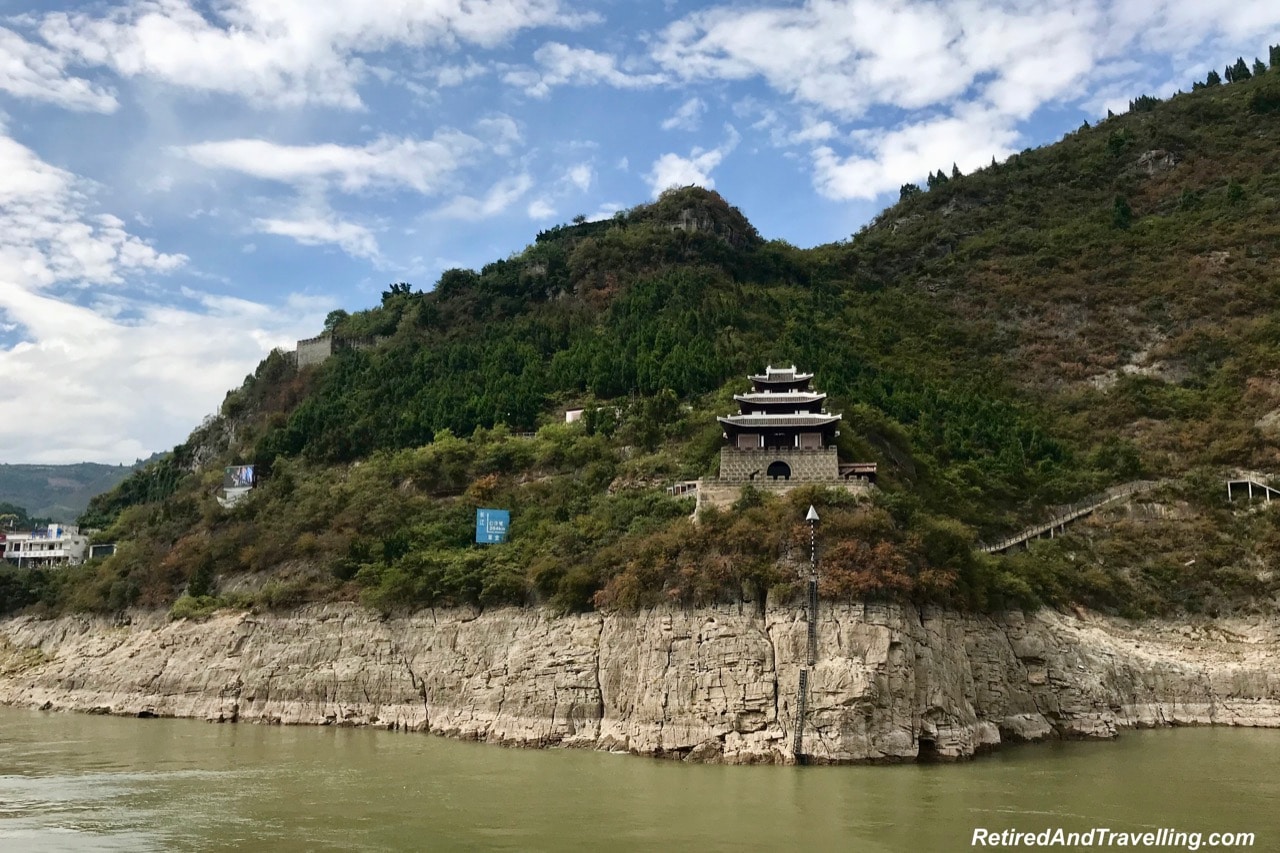 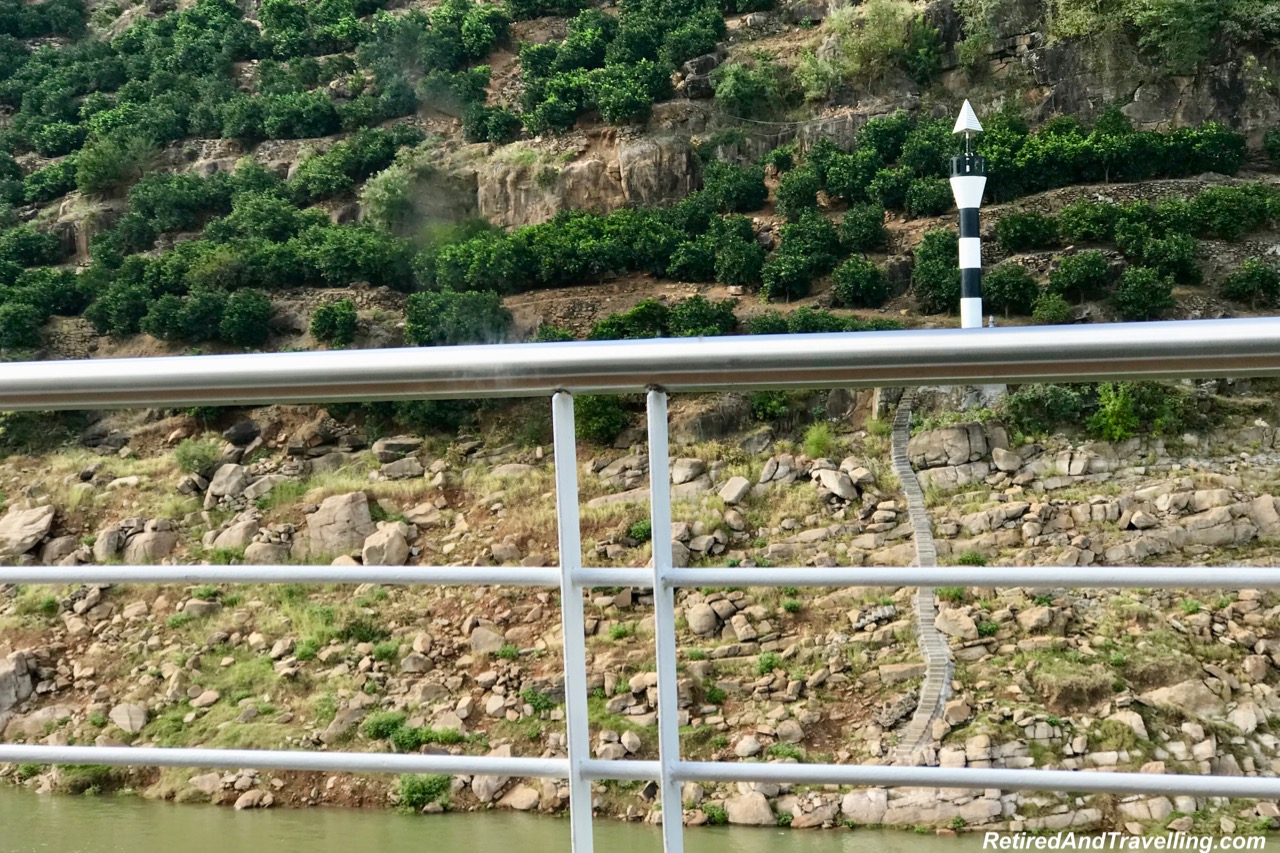 We enjoyed the last leg of the gorges as we cruised along the Three Gorges on the Yangtze River.

A Day Trip Through The Goddess Stream

Our excursion on the second day was a sampan trip up the Goddess Stream. It was possibly the most magical part of our cruise on the Yangtze River. We saw photos of this part of the gorge just bursting with red flowers. The flowers bloom in late October or November. At that time, it is also a little less wet. When we visited, there was just a little colour in the hills. But later in the fall would probably be the perfect time to plan a trip to explore the Three Gorges on the Yangtze River.

When we arrived at the dock, we tied up raft style with a ferry and another cruise ship and walked across the boats to get to shore. As we did the long walk to the sampans, we passed a large group of Chinese tourists coming the other way. Everyone shouted hello. We responded in Chinese. And once I was pulled aside so someone could take a selfie pic with me. 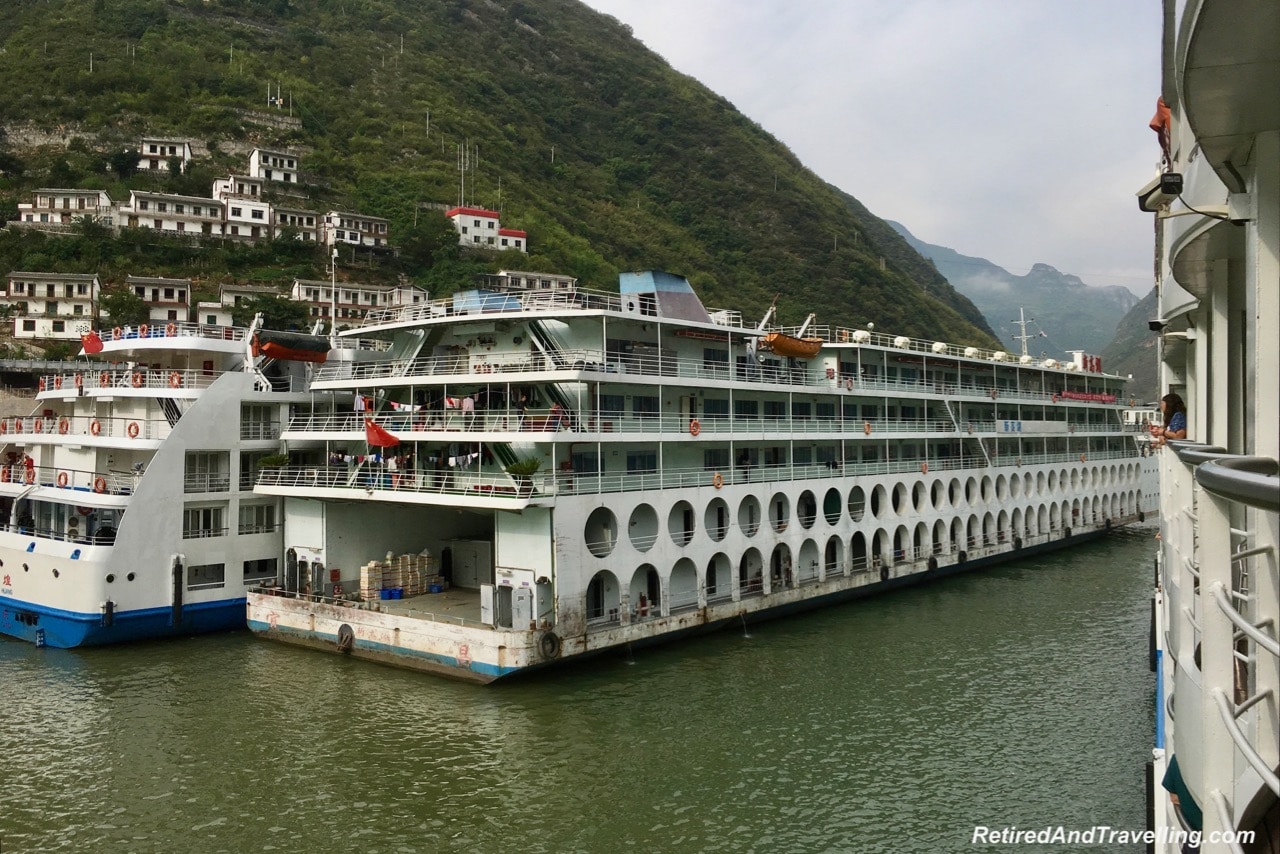 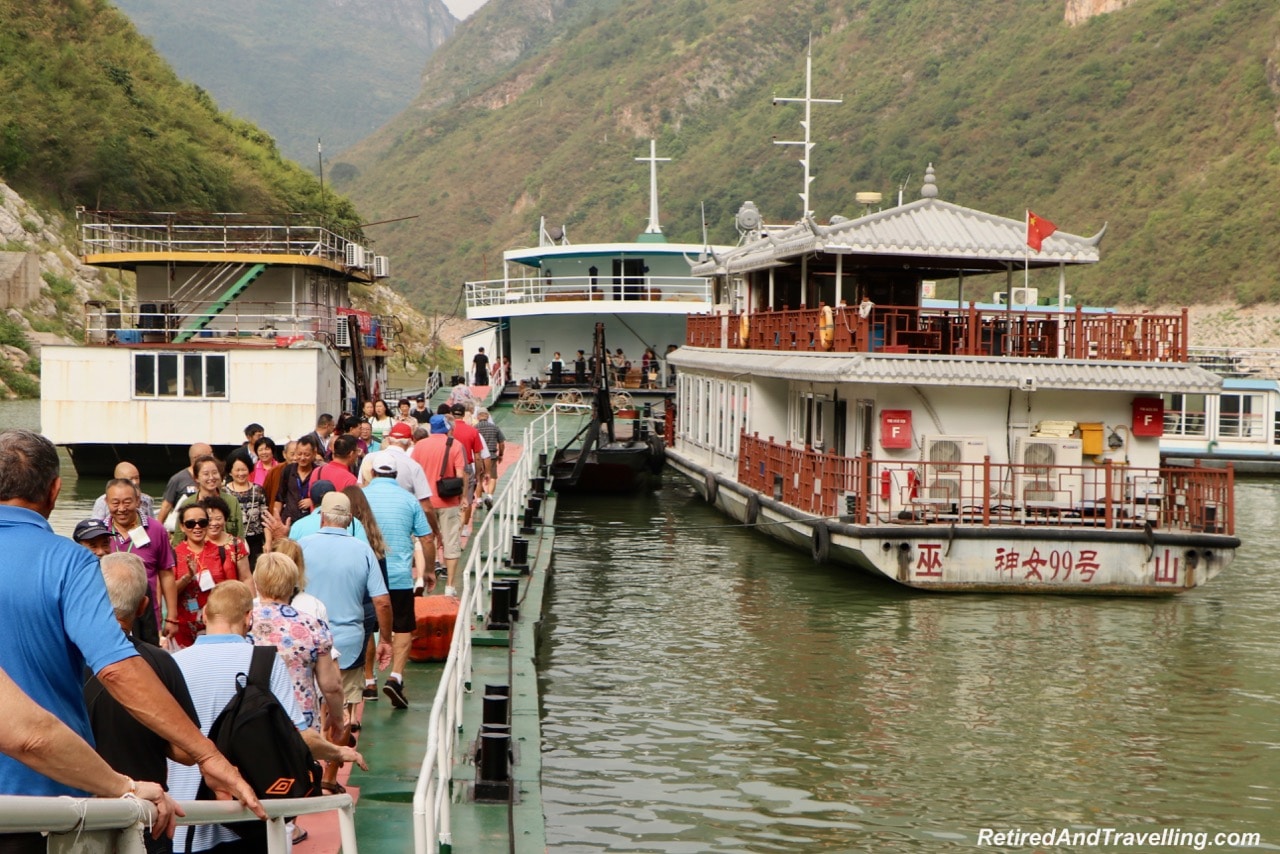 The sampan trip up the Goddess Stream was a popular attraction for all tourists that travel the Three Gorges on the Yangtze River. Later in the trip, we cruised on the Li River outside of Guilin. The scenery in the two gorge areas were strikingly similar.

A Sampan Trip Up The Goddess Stream

There was a huge set of sampan boats that had just returned. We boarded the boats in groups of 20. There was a good-sized area inside that was covered. And a small back deck that took about 8 people comfortably. We settled in and off we went. 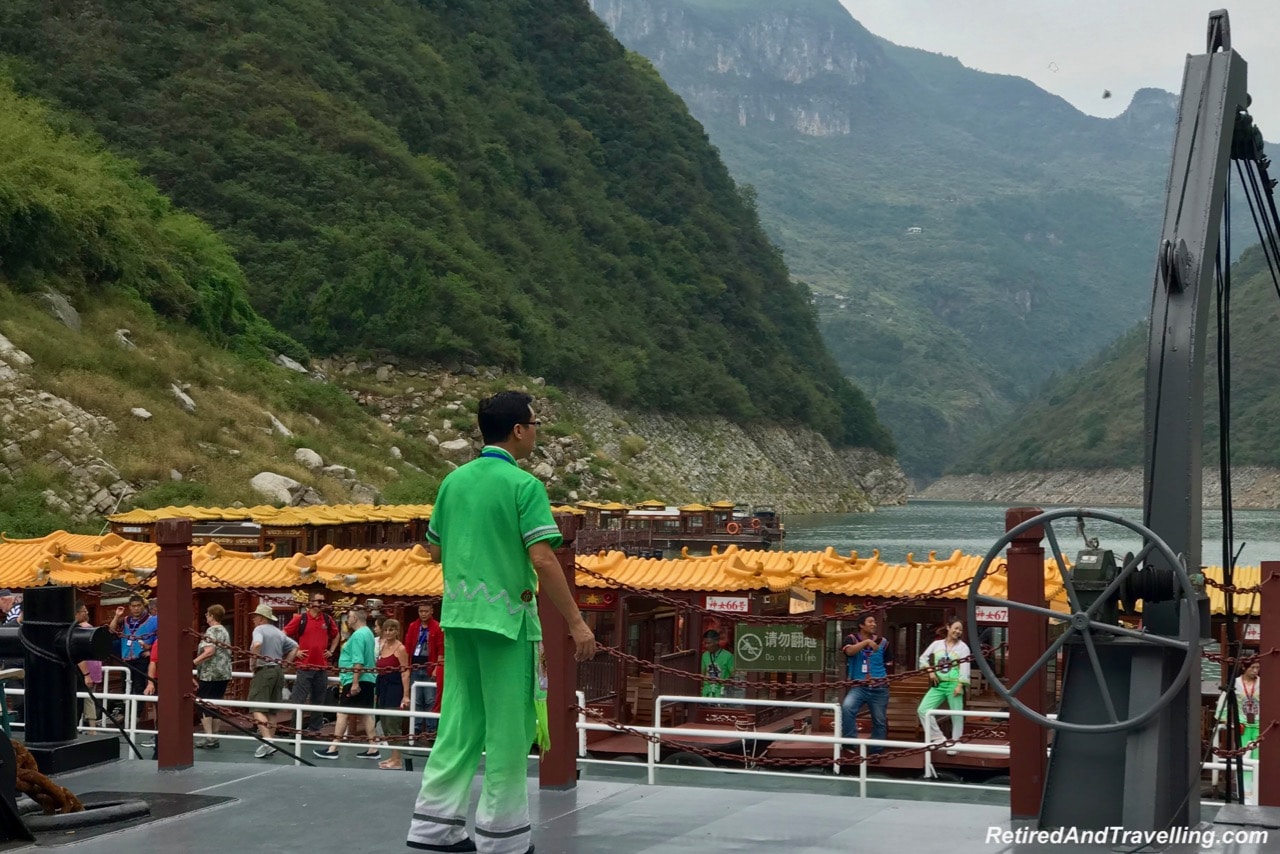 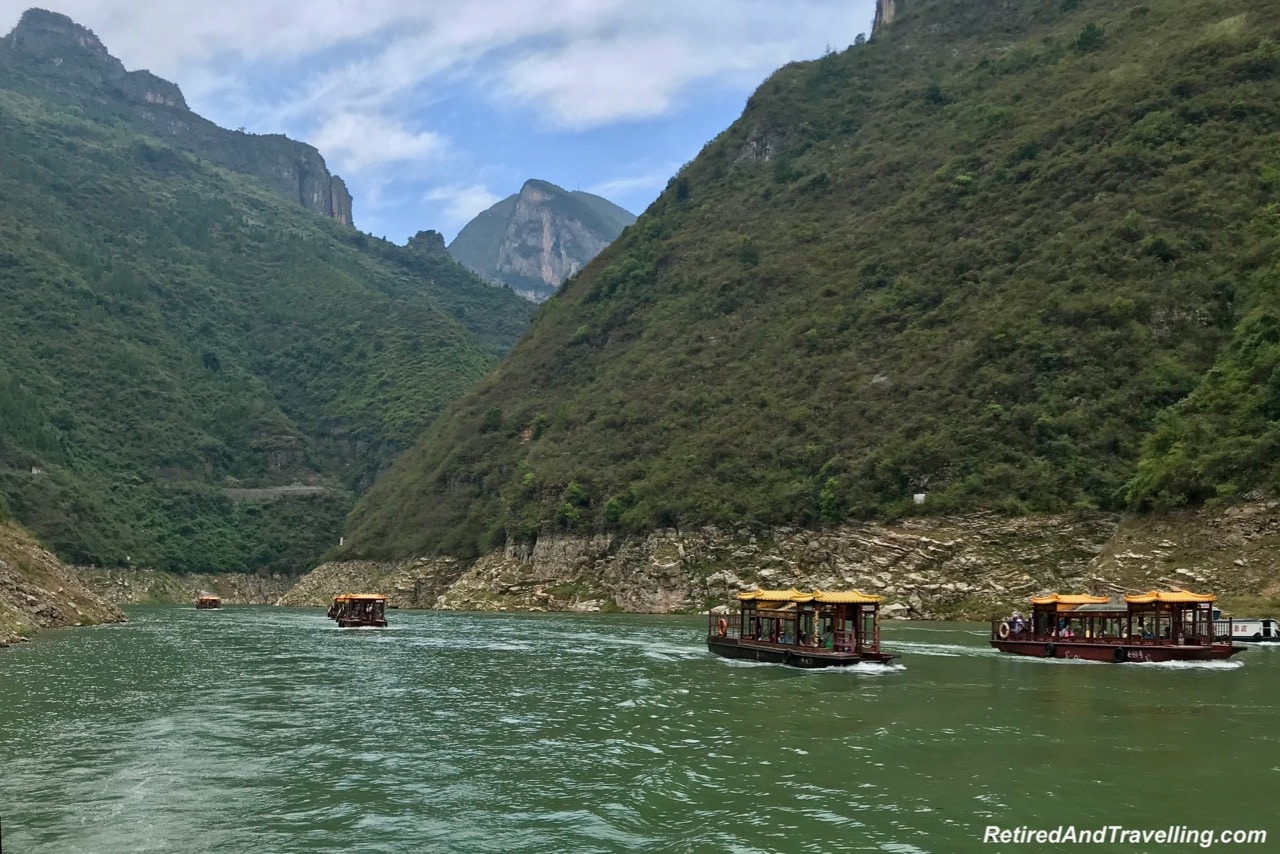 Our heads swivelled as we slowly went up the narrow channel. In most parts of the channel, the sampans vied for position or cruised two abreast. At the very end, the channel was so narrow and shallow, the boats had to go single file. Everyone turned around at this point and headed back. At one point there was a big traffic jam of boats. That is the kind of traffic jam I don’t mind! 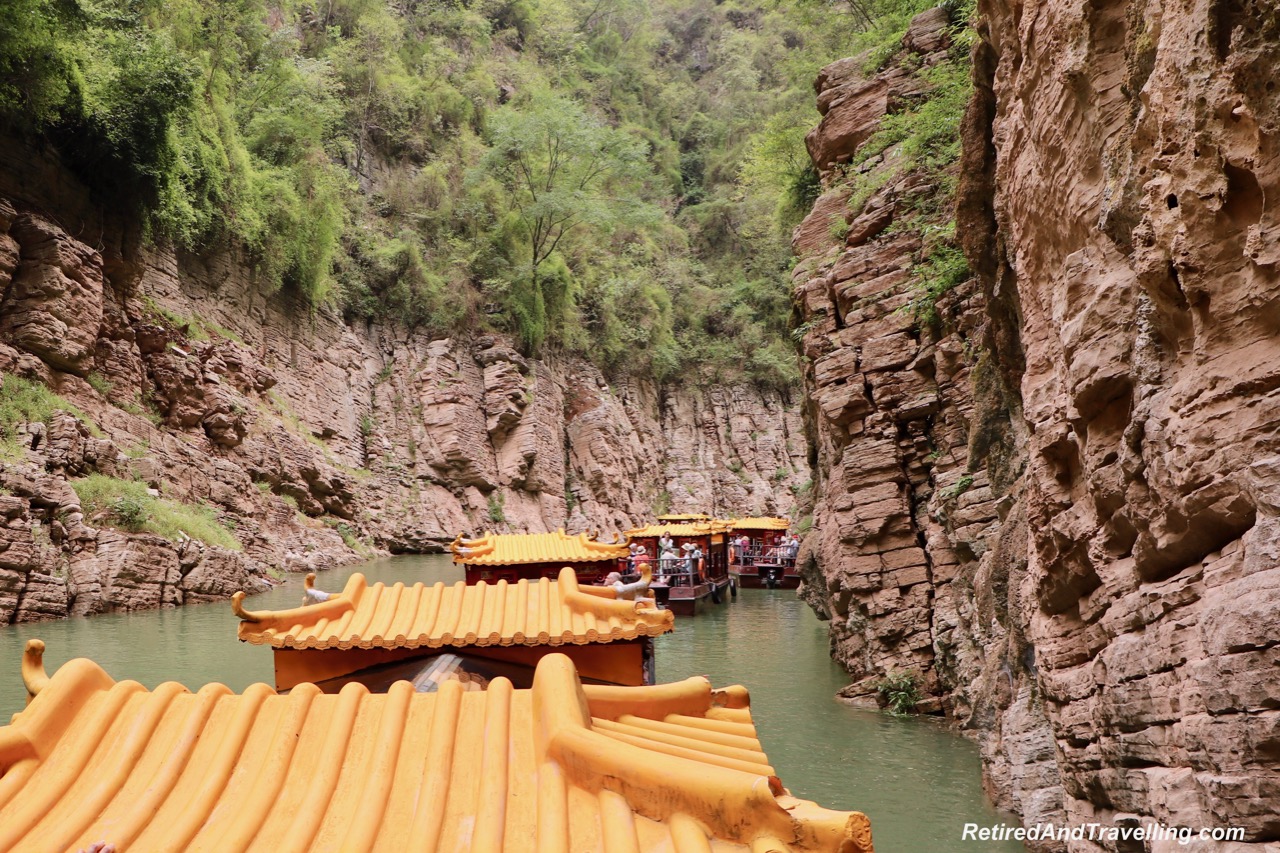 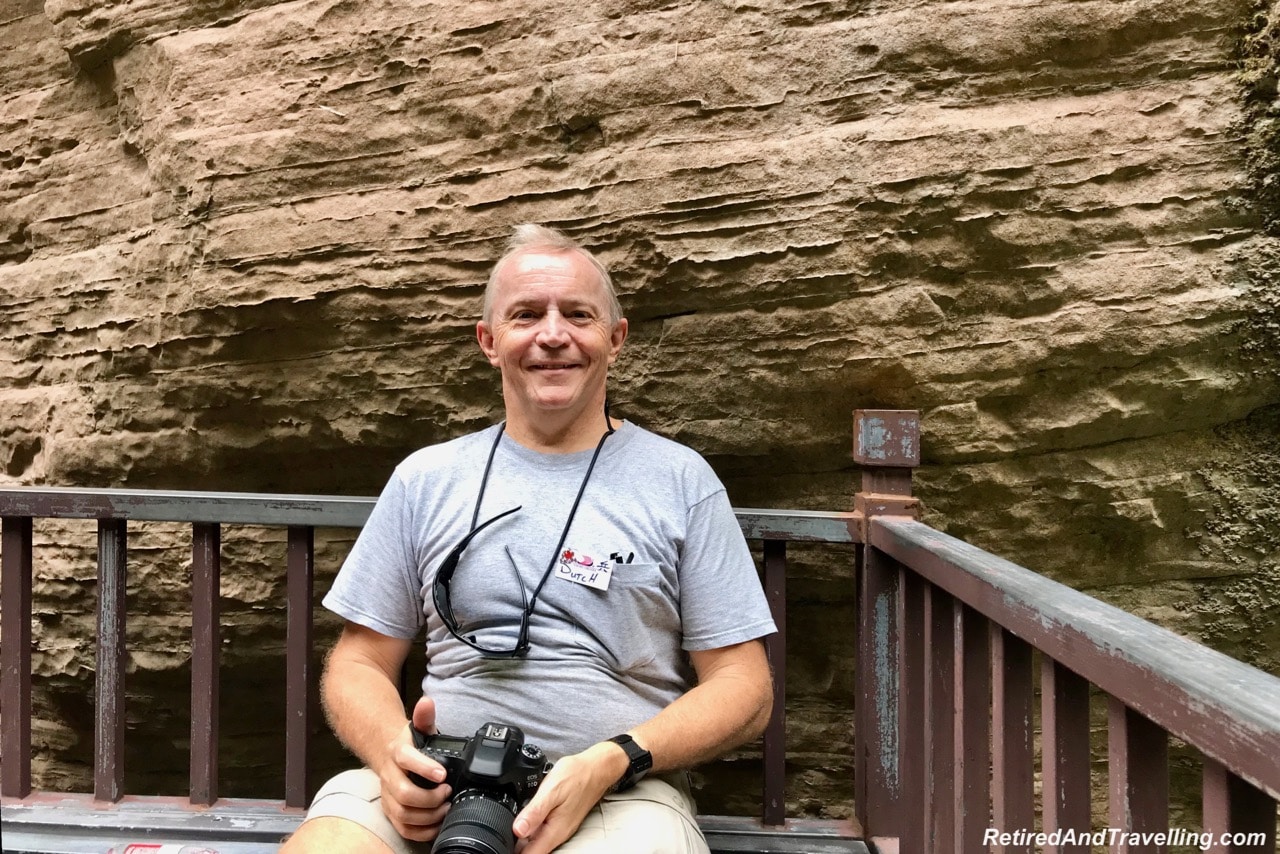 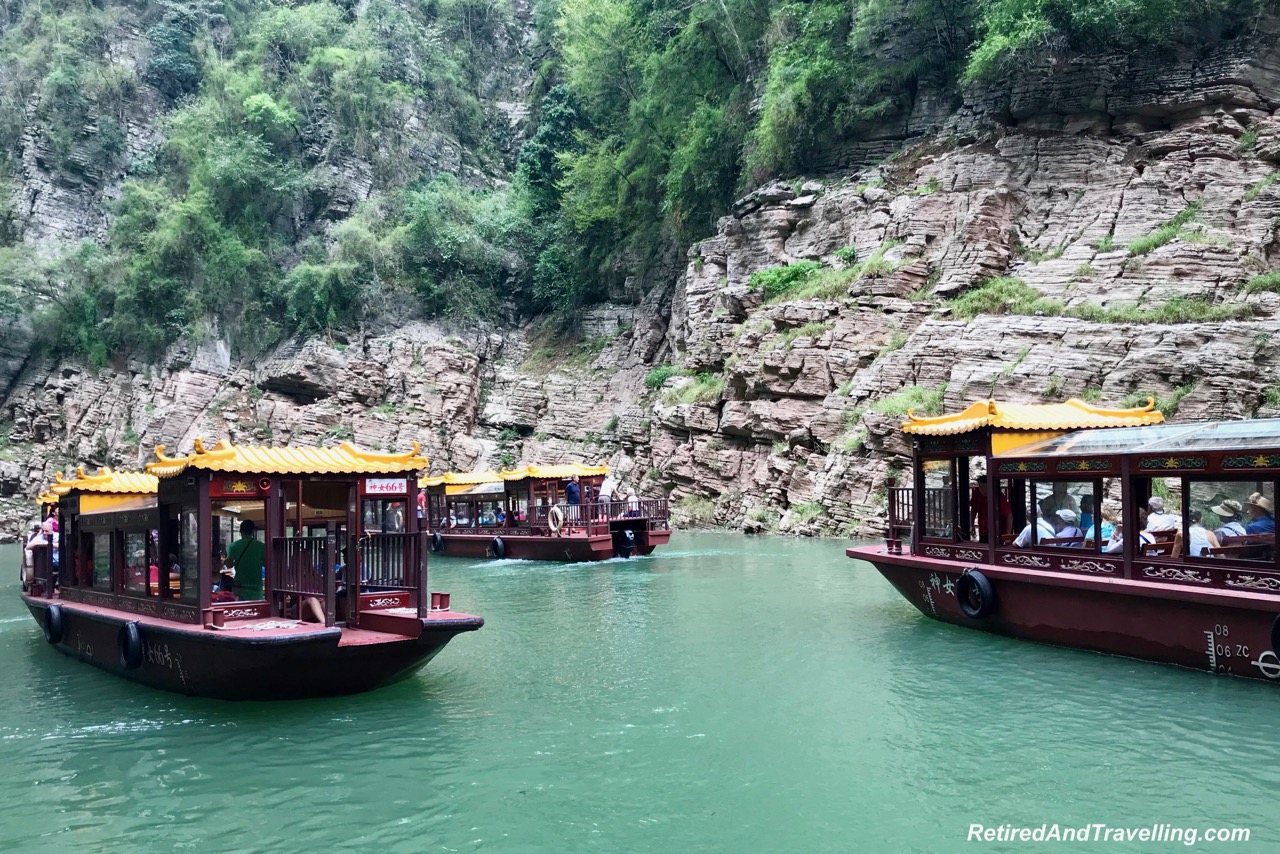 Everywhere we looked we saw cliffs that towered above us. The main part of the channel was over 240 feet deep. We imagined that the rock faces under the water matched the rock above. The rock geek in me just kept snapping pics. 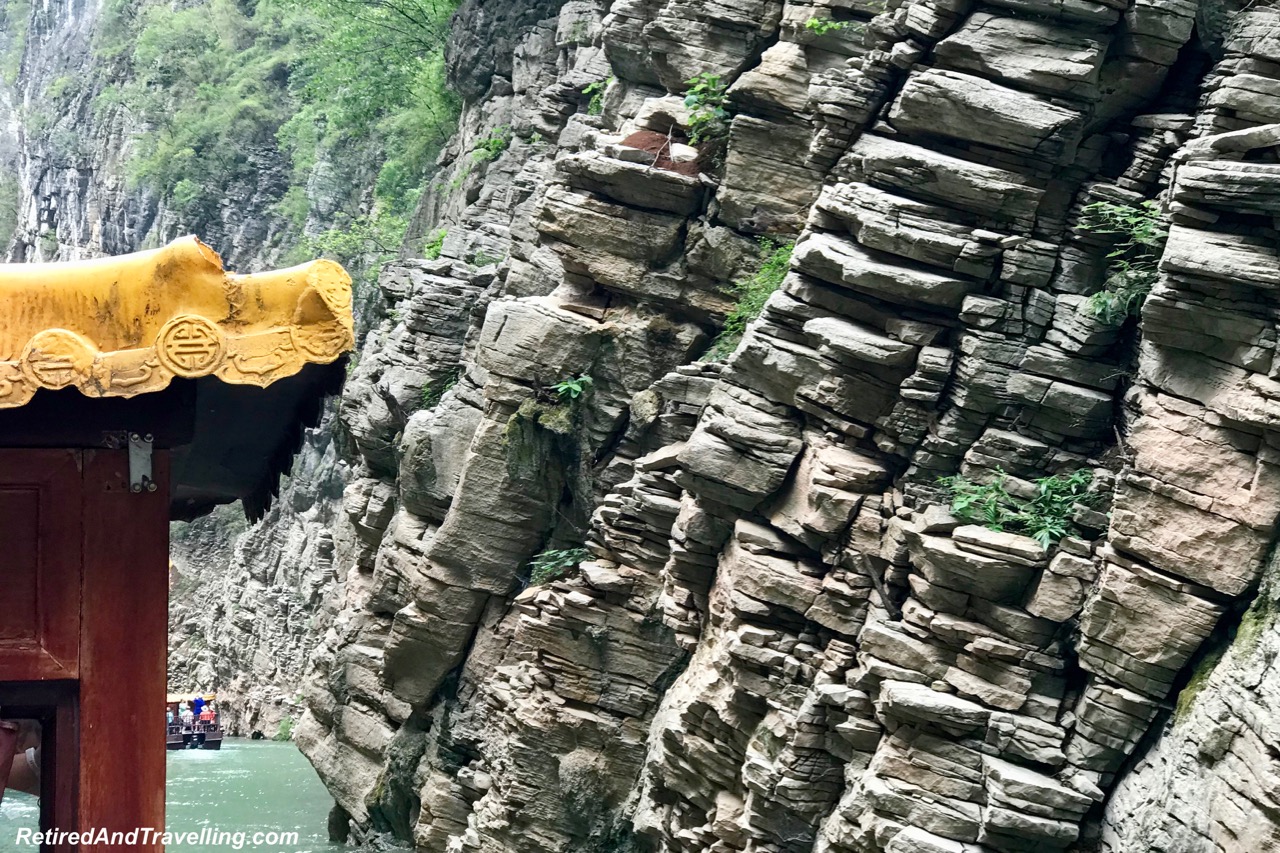 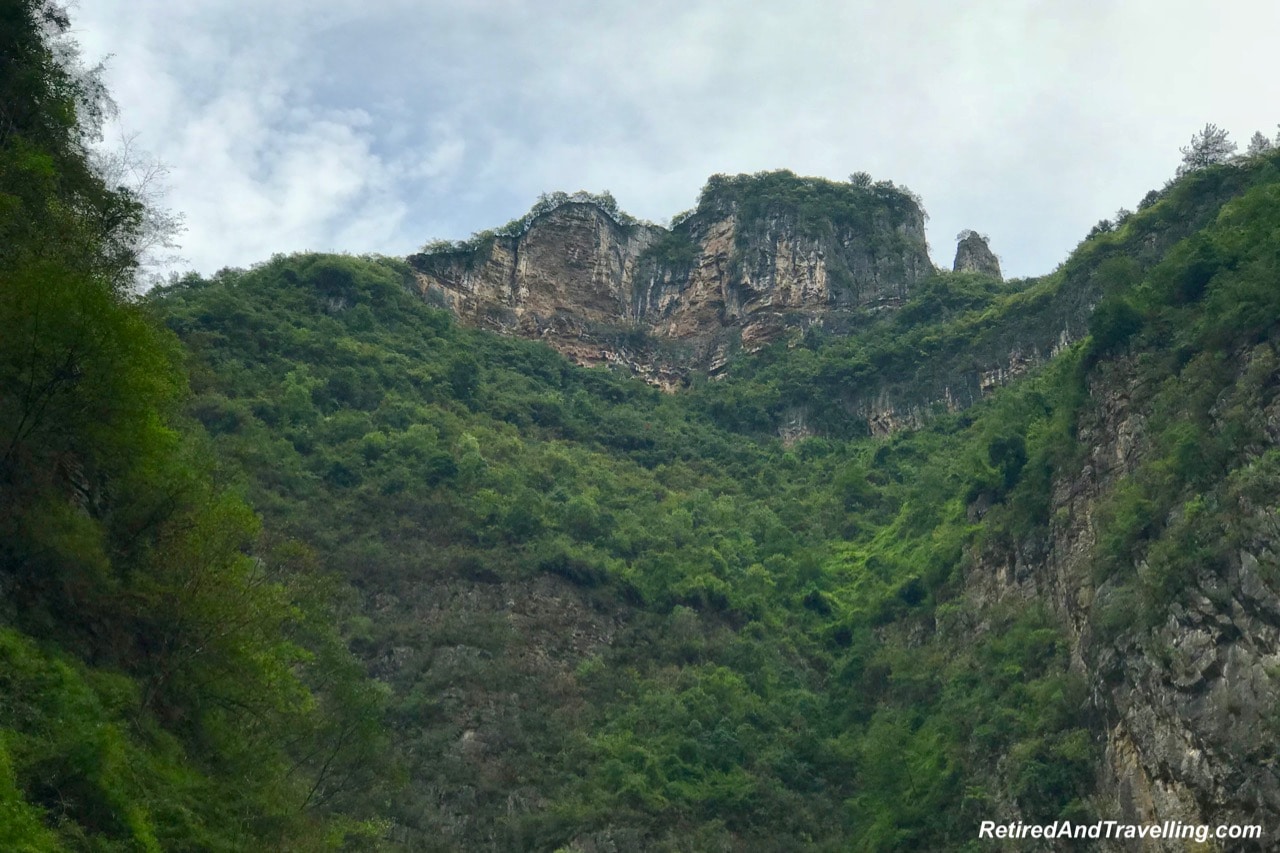 It was truly a great trip along the Goddess Stream. It might have been nicer as a private tour rather than in a conga line of sampans. But it was still a great way to spend a few hours and get a little closer to the water.

If you are not doing a cruise on the Yangtze River, you can still visit the Three Gorges as a day trip. It is definitely worth a day trip. I am not sure if you can do the Three Gorges Dam and Goddess Stream excursion in the same day trip. If not, you may need to plan to stay in this area for a little longer to enjoy both treats.

We got lucky and had ok weather for our two days in the Three Gorges on the Yangtze River. But when we talked to people, it seemed that a bit later in the fall would be better than mid-September. Consider planning your visit just a little bit later.

Did you explore the Three Gorges on the Yangtze River? What was the highlight of your trip? 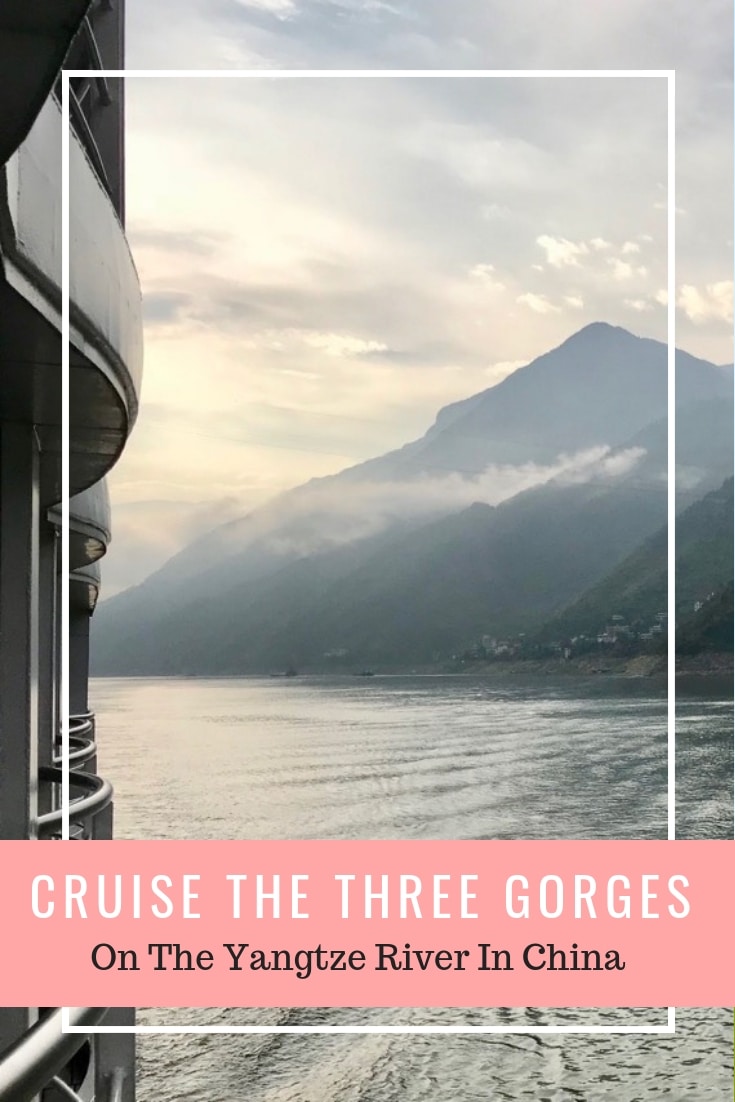 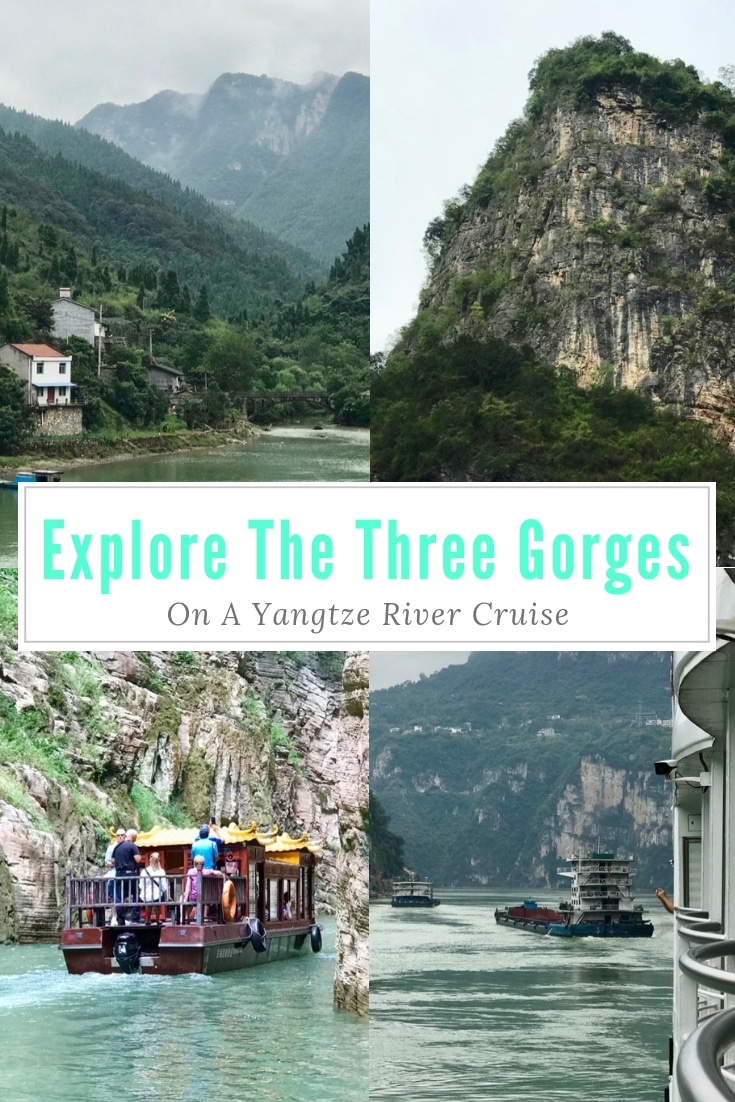