We Headed To The Yangtze River

A Quick Tour Of Wuhan

From the airport we took a bus to downtown Wuhan. Wuhan is the largest city in central China and a major transportation hub. The uprising that sparked the end of China’s Quin dynasty began in Wuhan. Streets and buildings throughout this city had names that included the word “shouyi” which means “revolution”.

Wuhan is yet another river city in China. We continued to marvel at the bridges built to cross the rivers. While most were very similar suspension bridges, every now and then we saw something a little bit different. 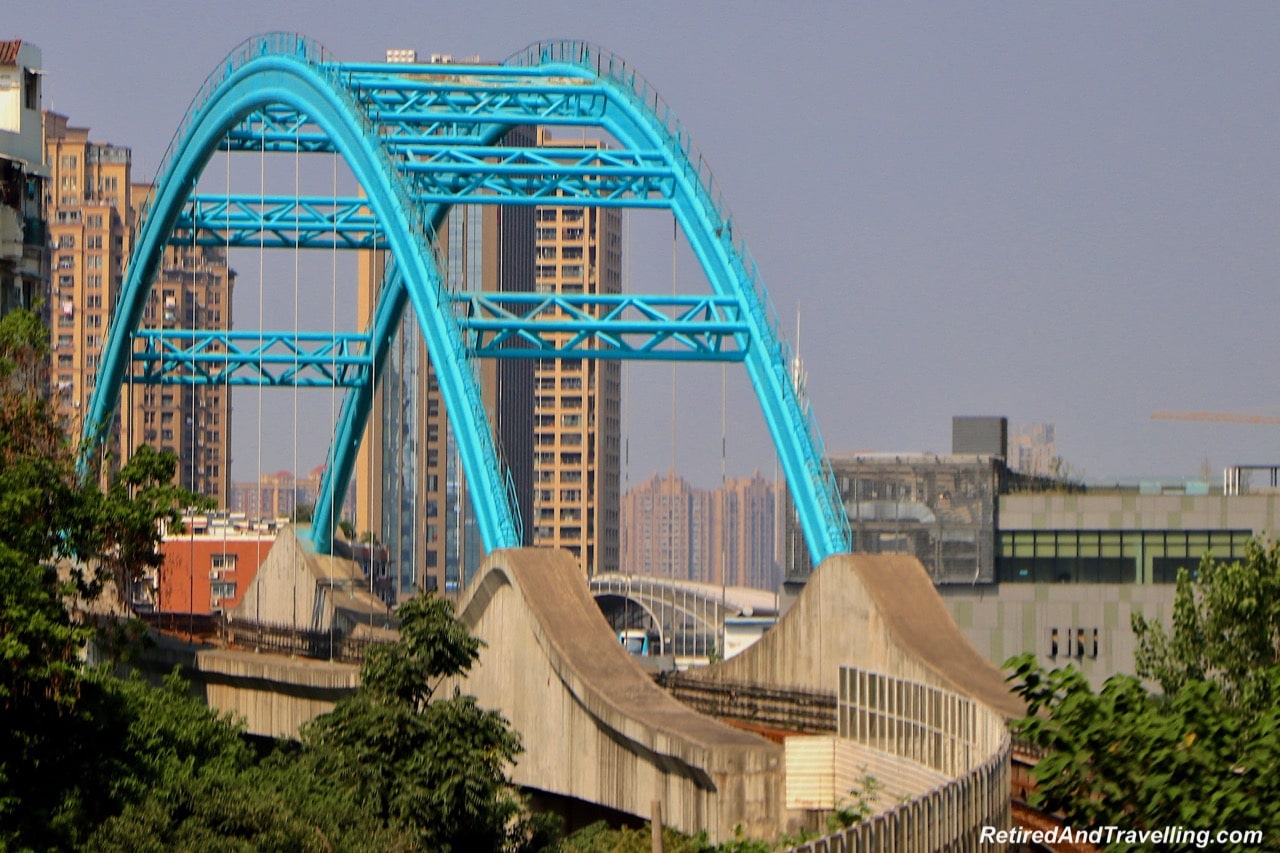 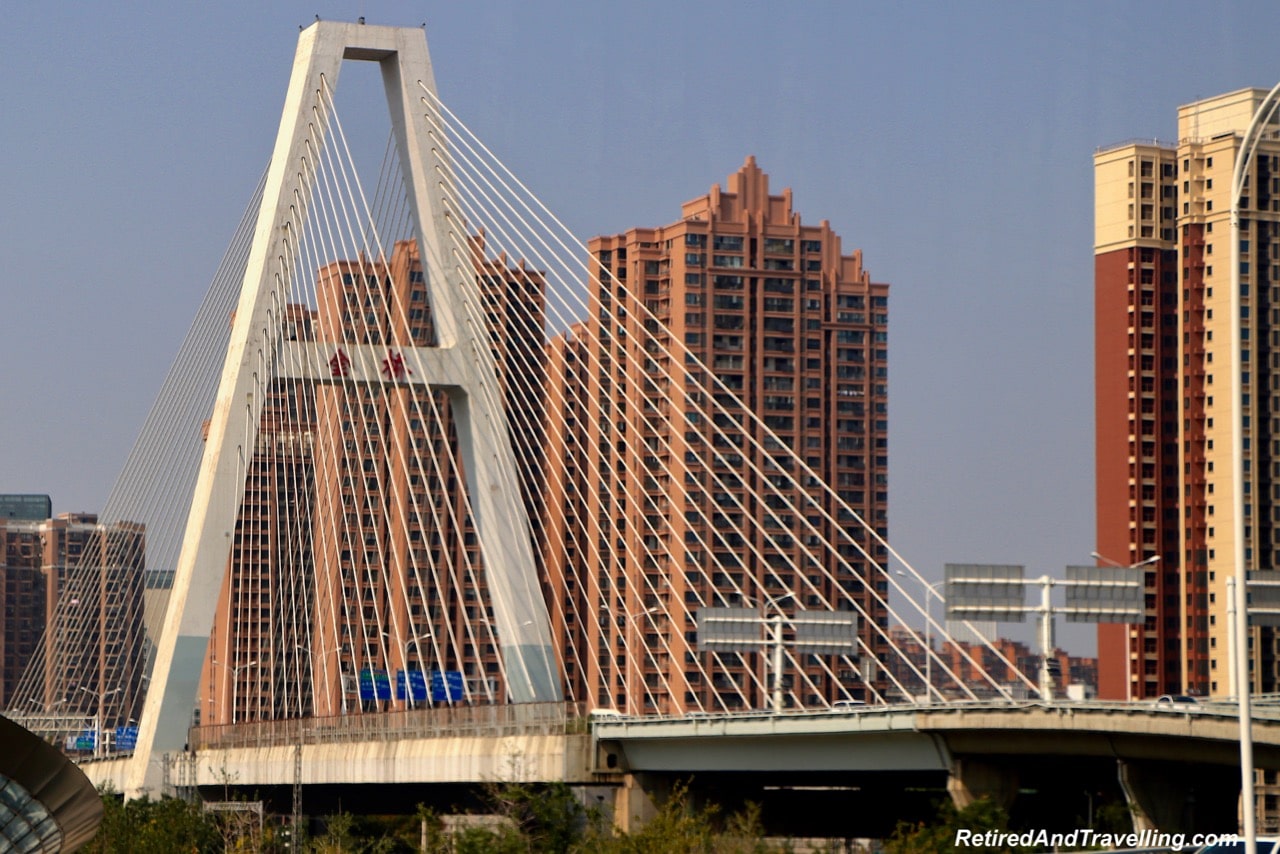 We saw a little of the city as we drove through. But we had one stop for the day.

Marquis Yi of Zeng Exhibit At The Hubei Provincial Museum

Our tour for the day was a short stop at the Hubei Provincial Museum. 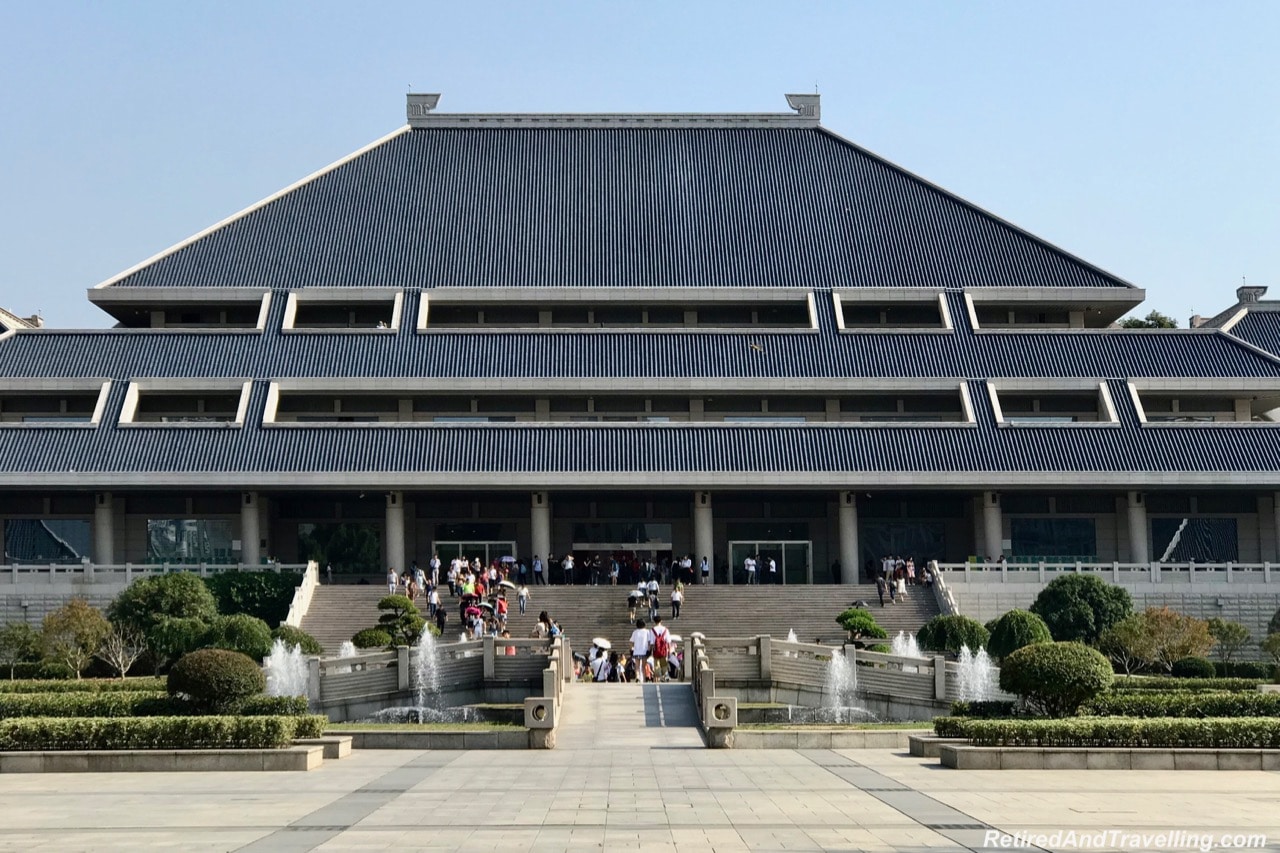 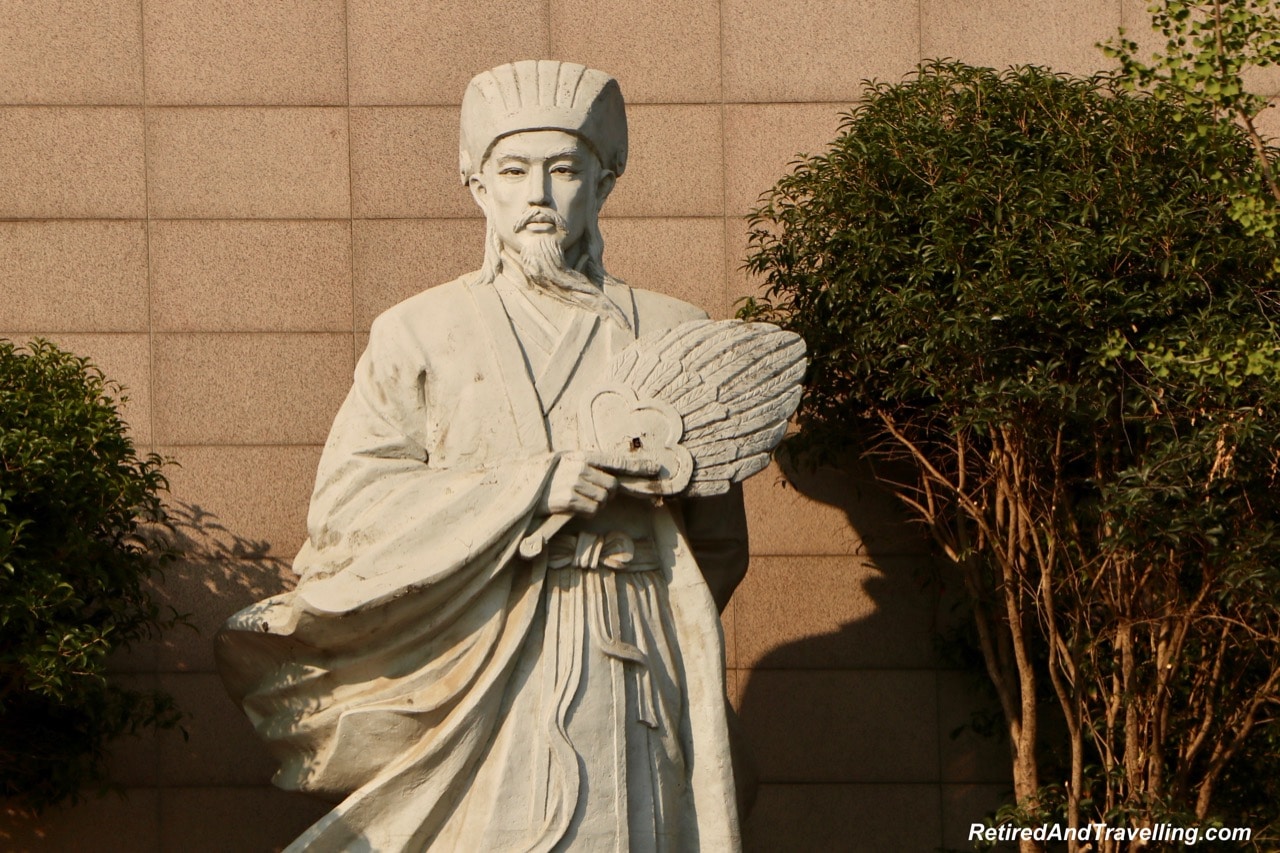 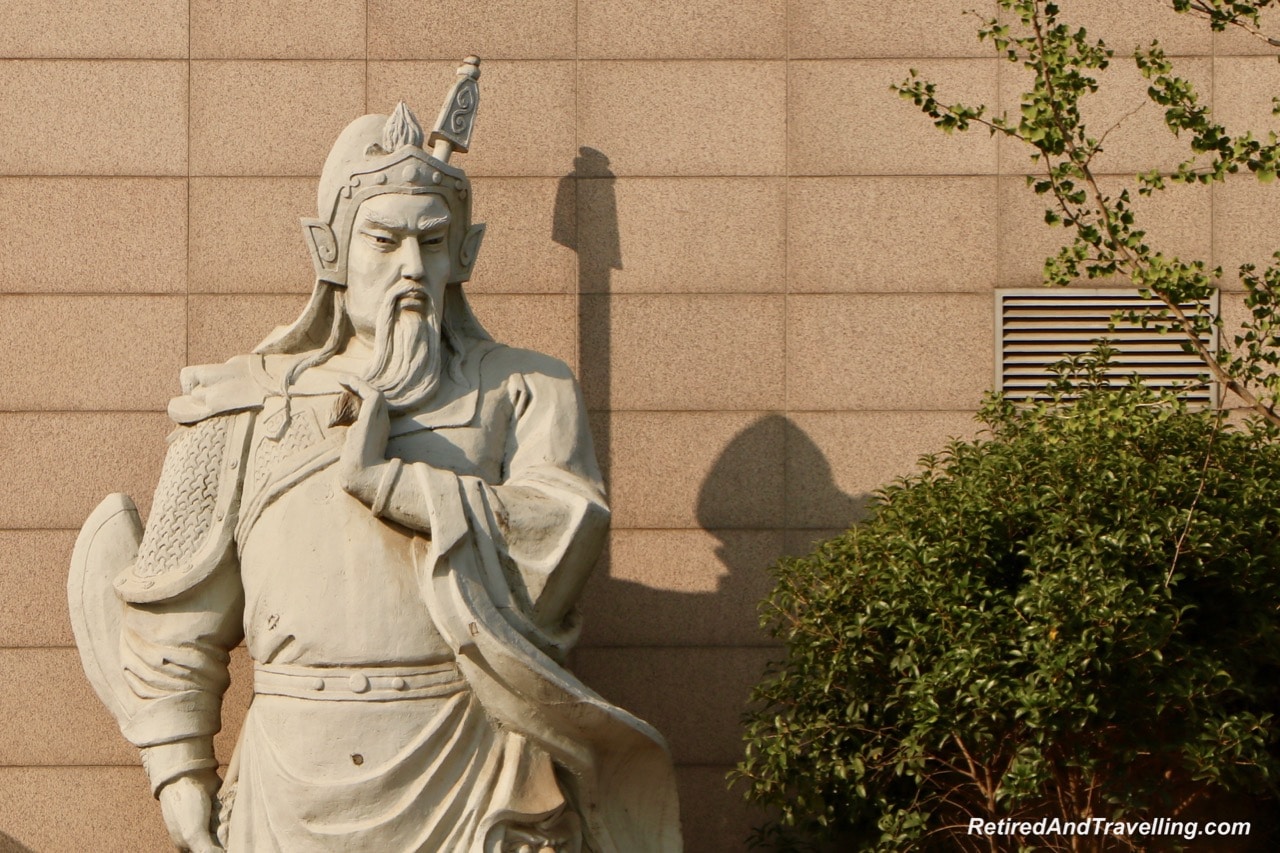 As we walked around, we saw the ancient bronze work from the tomb of Marquis Yi of Zeng. There was an interesting collection of bronze cooking dishes, wine vessels and even what might be the first refrigerator. 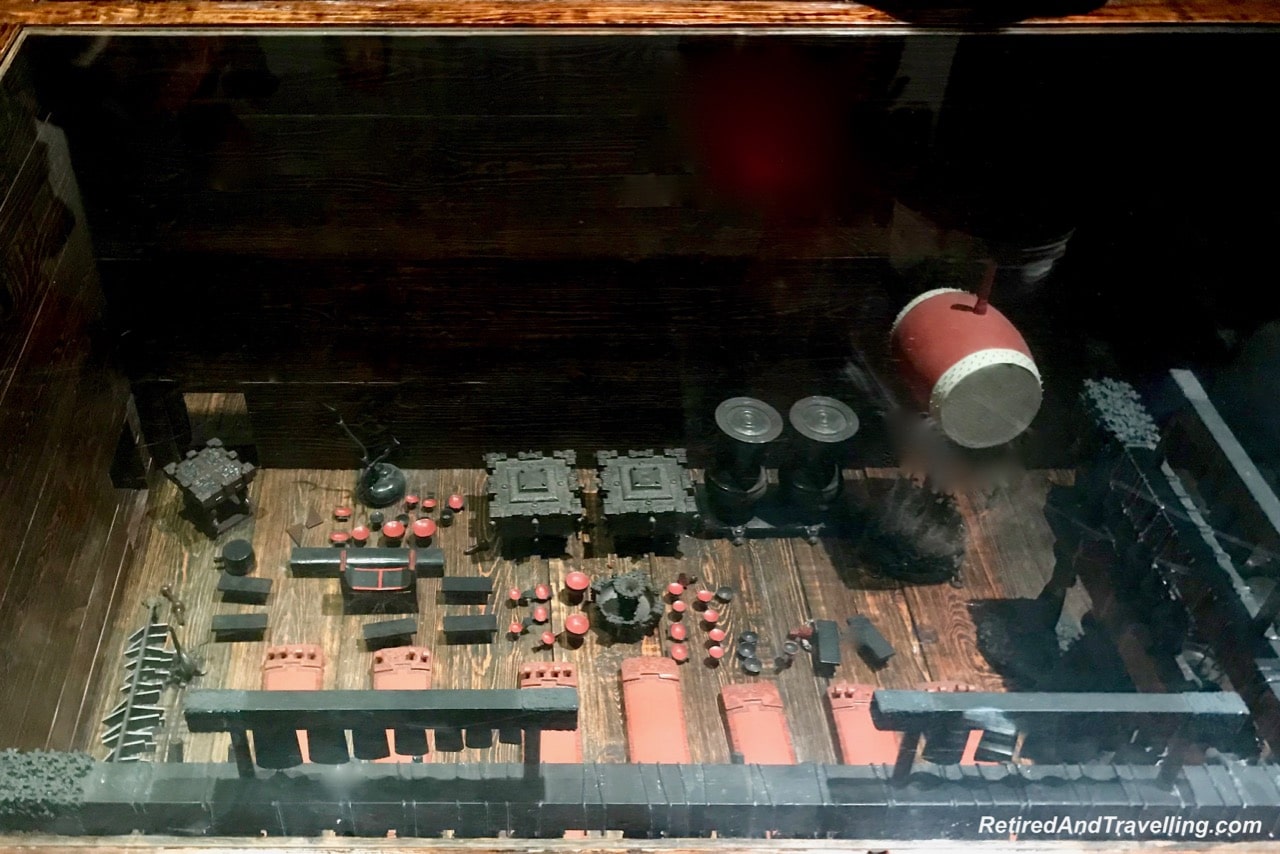 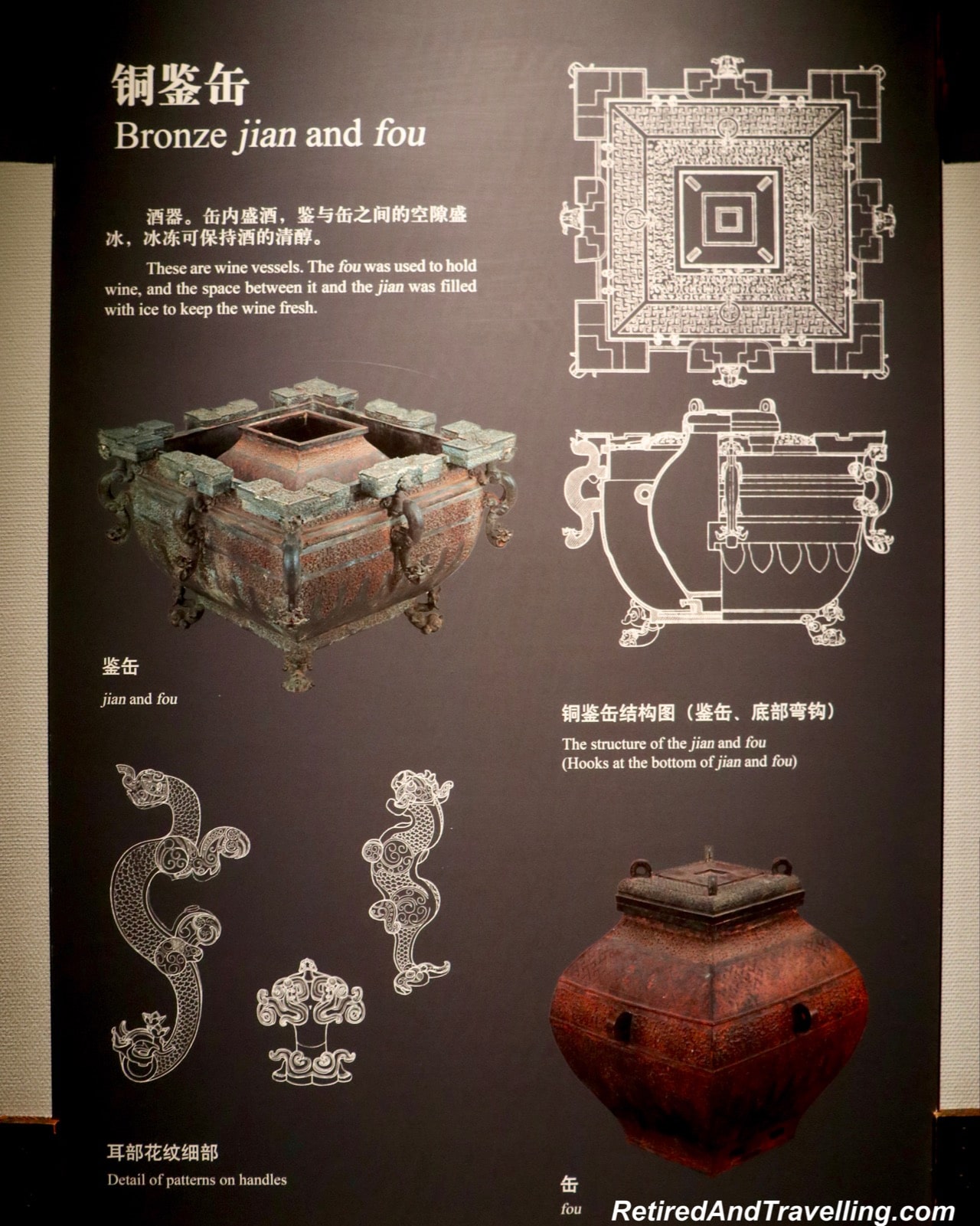 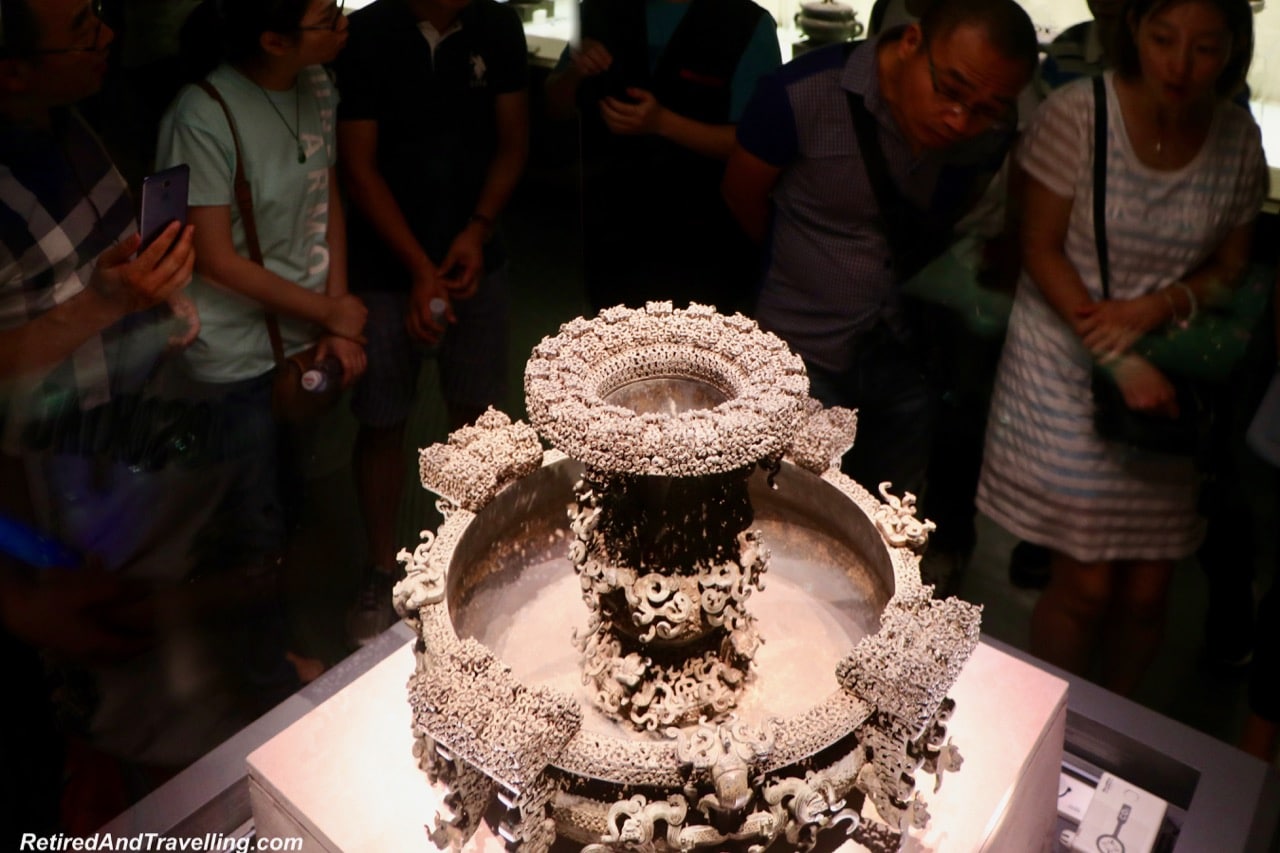 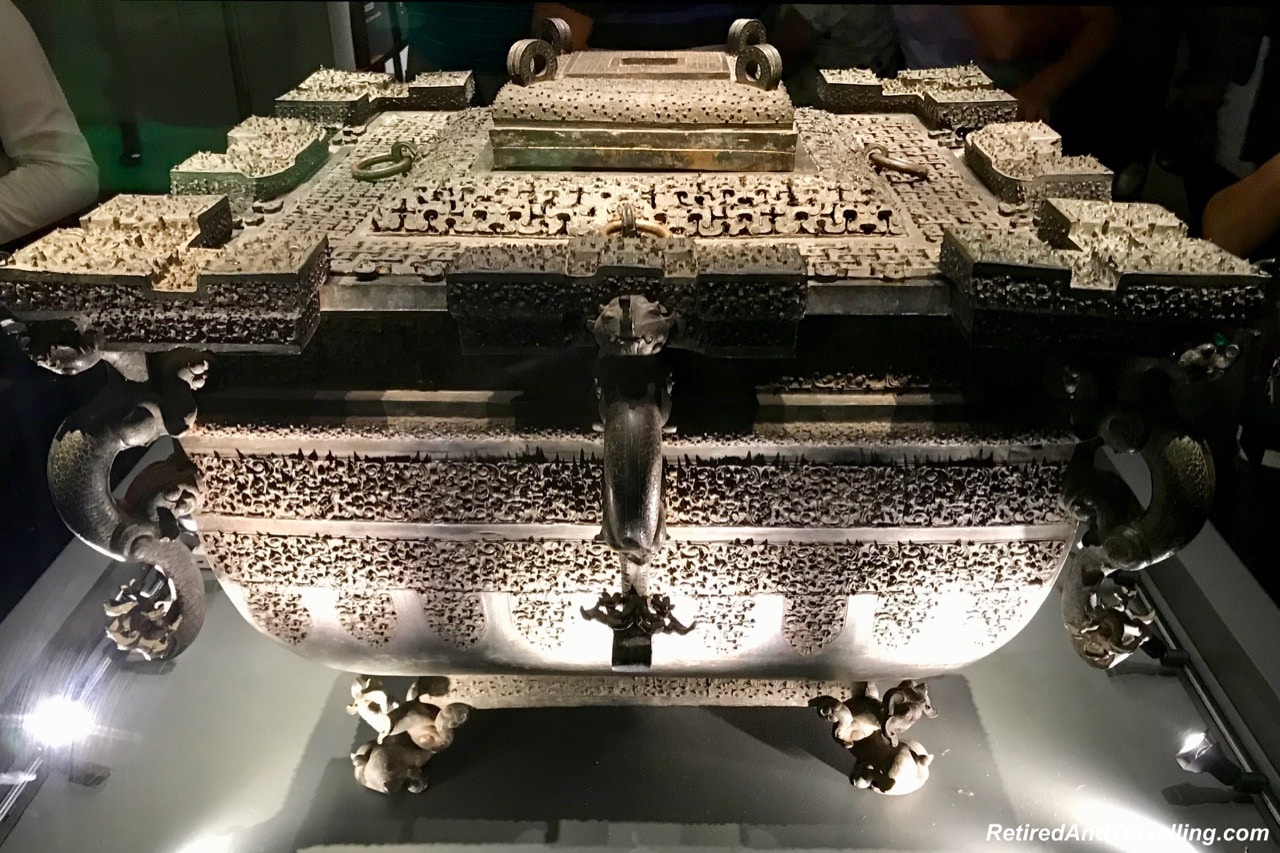 A small section showed off gold and jade jewellery. In another display case we saw a wooden lacquer mandarin duck. And on the way out we stopped to see the warrior and horse. 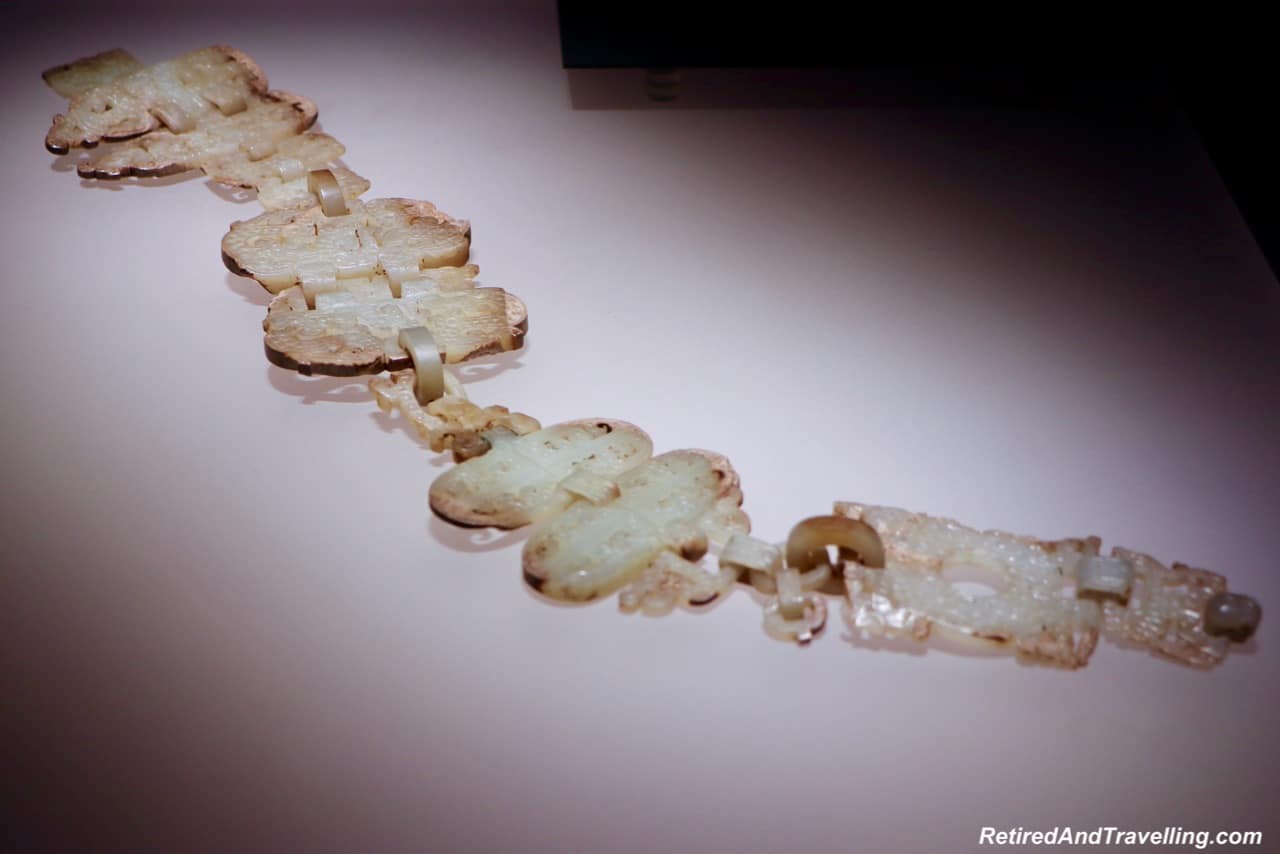 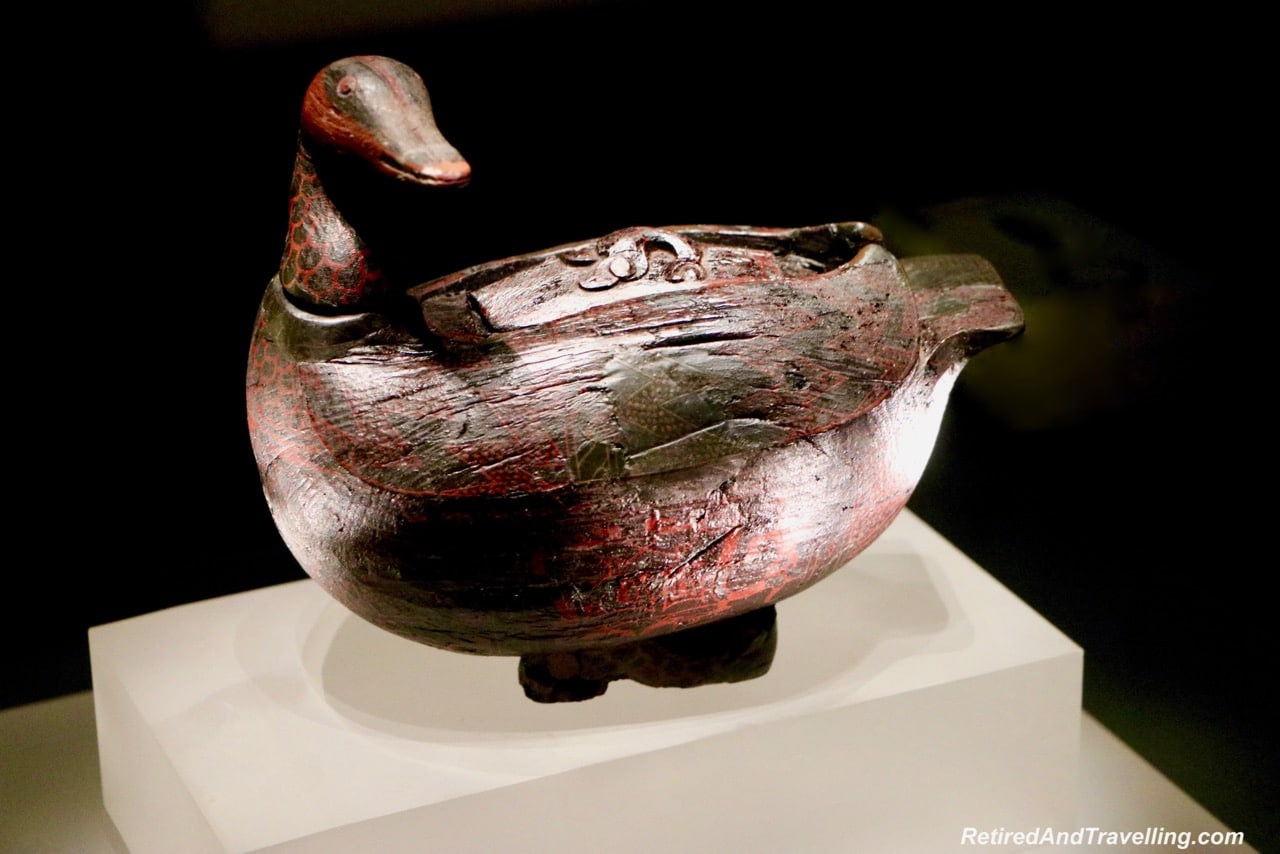 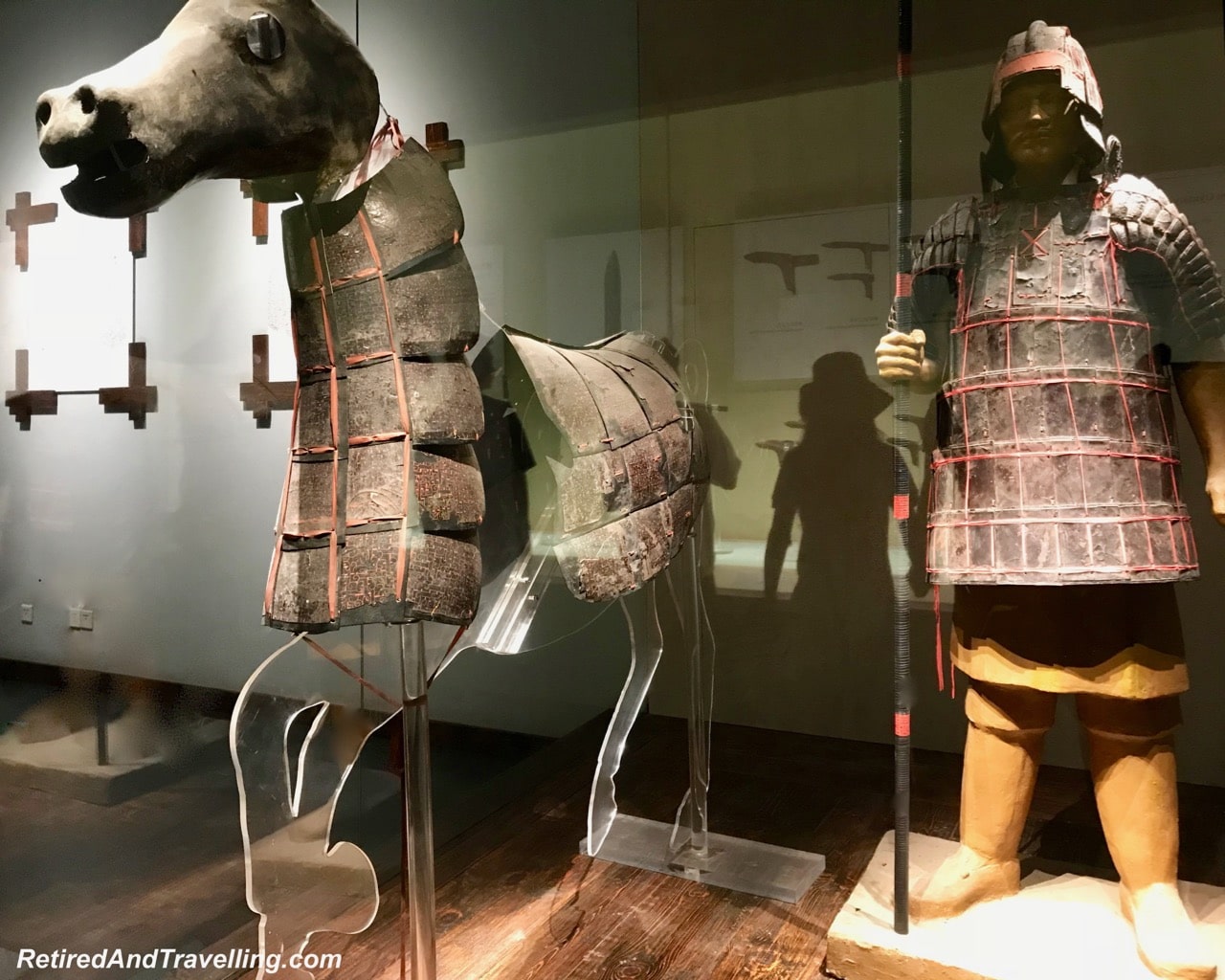 If you start your cruise in Wuhan on the Yangtze River, plan a visit to the Hubei Provincial Museum.

There was a large selection of the museum for the musical instruments in the time of the Marquis Yi of Zeng. 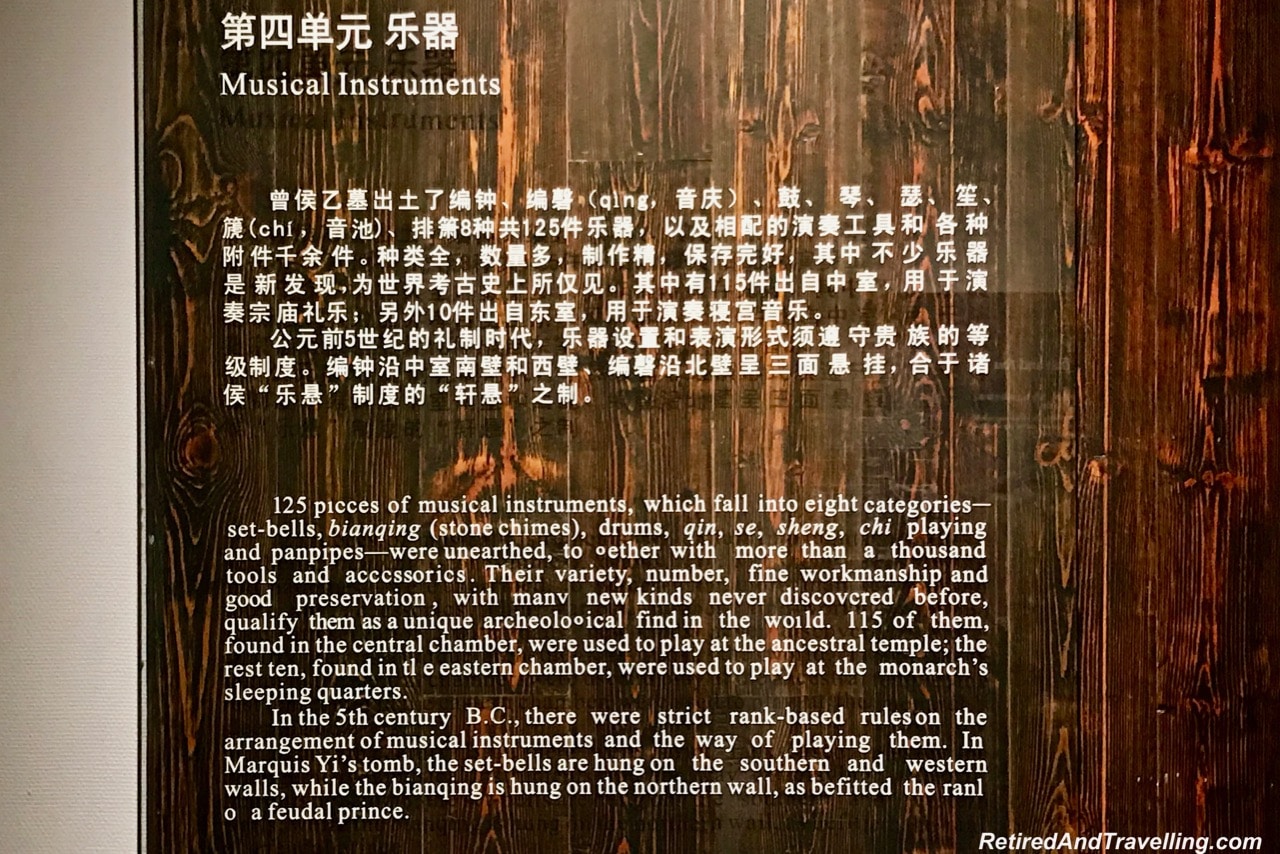 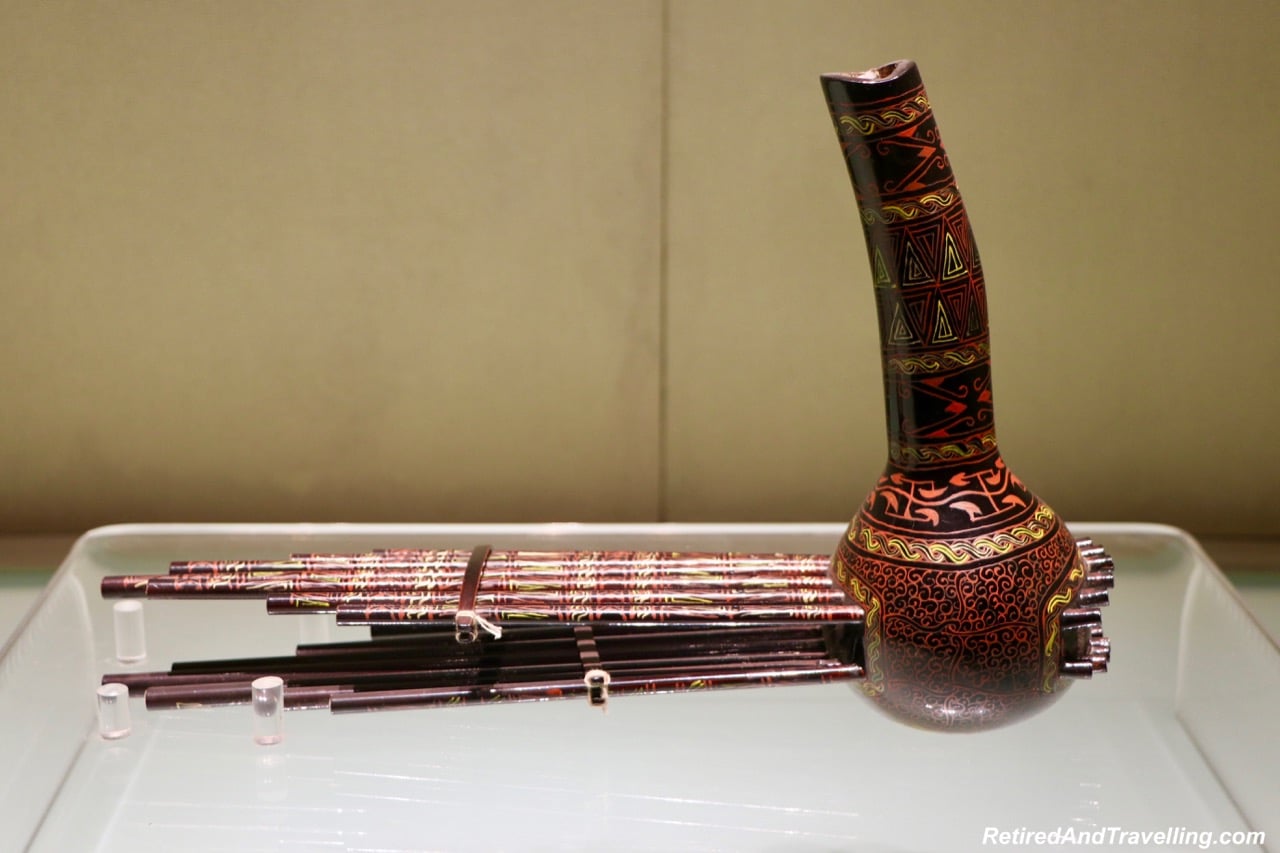 But the most famous relic at the museum were the 64 bianzhong (bell chimes) that were discovered in the tomb. These bells were created in the period from 475 to 211 BC. The 64 bells are bronze and in different sizes and shapes (from 8 inches and 5 pounds to over 5 feet high and 448 pounds). The bells cover five octaves. The fine detail in the carvings on the bells kept us entranced as we walked around all sides of the bells. 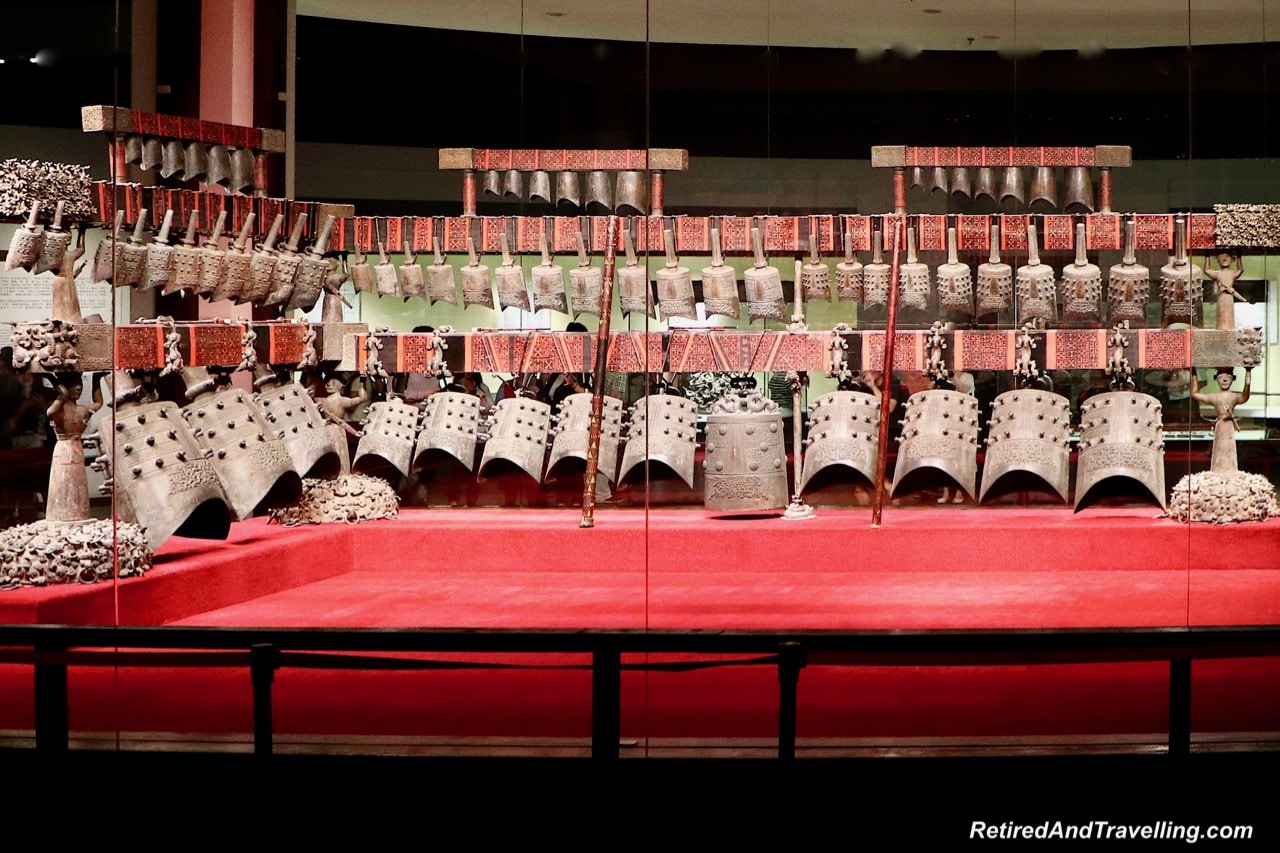 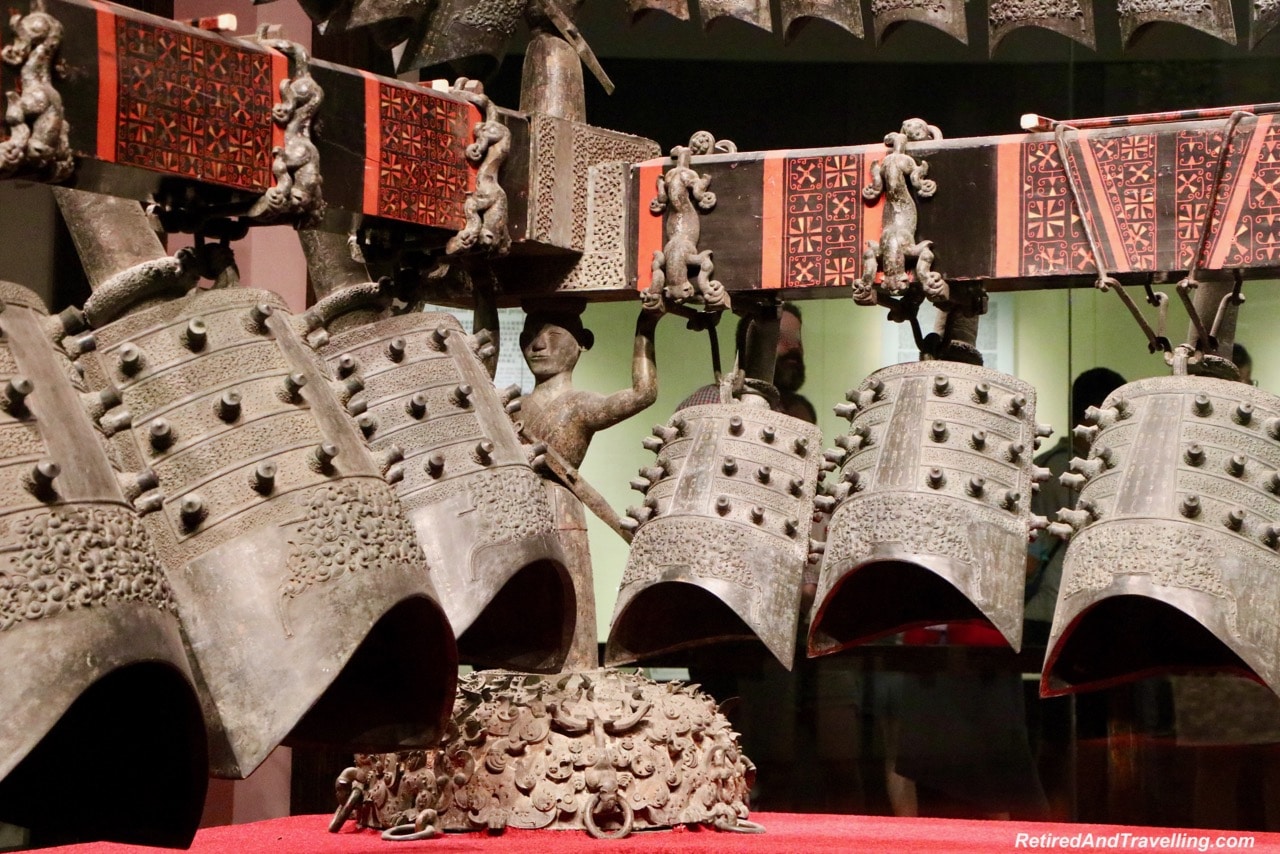 If you visit the Hubei Provincial Museum in Wuhan on the Yangtze River, you will be amazed by the bell chimes.

We Enjoyed A Live Performance

There was one more treat schedule for us! We attended a live performance by musicians dressed in traditional garb. They played on a replica of the bell chimes and several other traditional Chinese instruments. The actual bells are only played for important ceremonies. But the replicas gave us the opportunity to hear the wide range of sounds the bell chimes made. 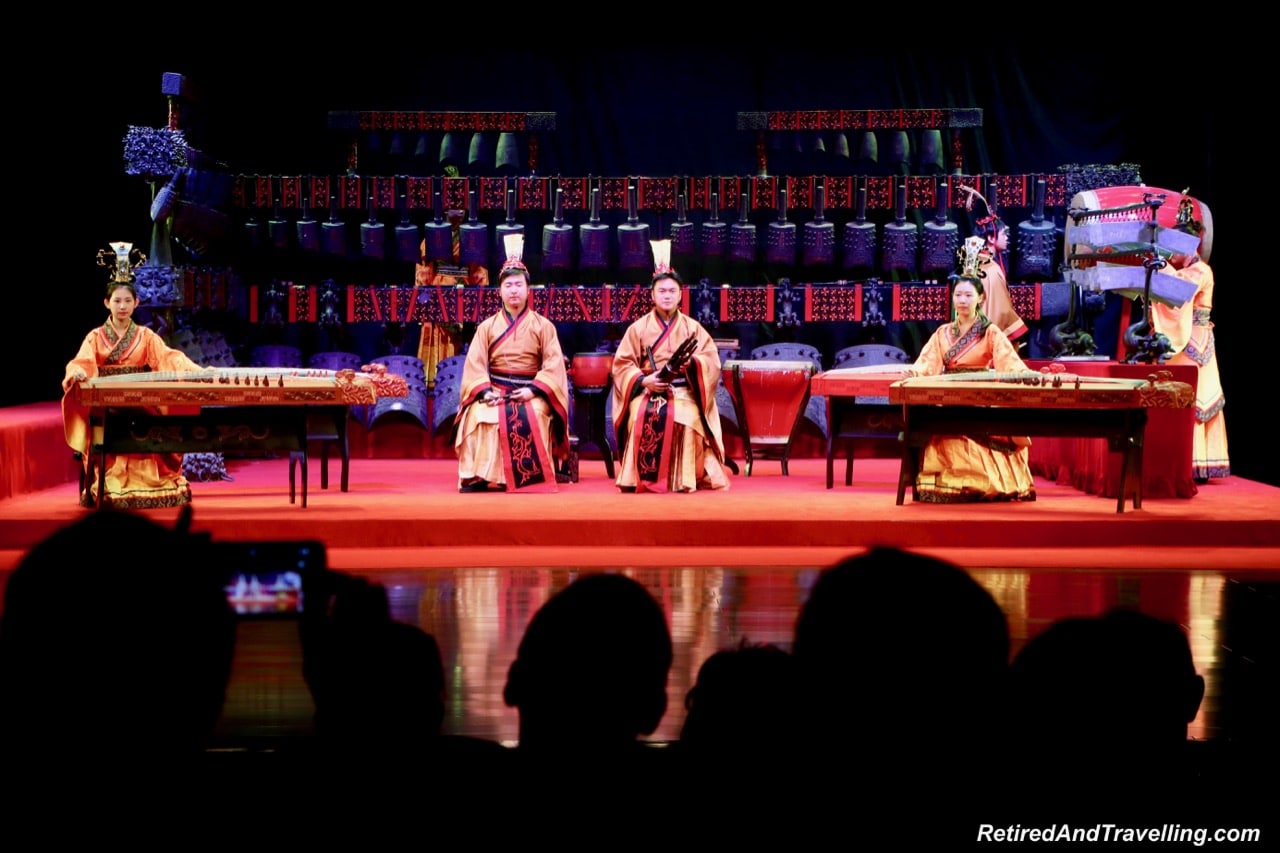 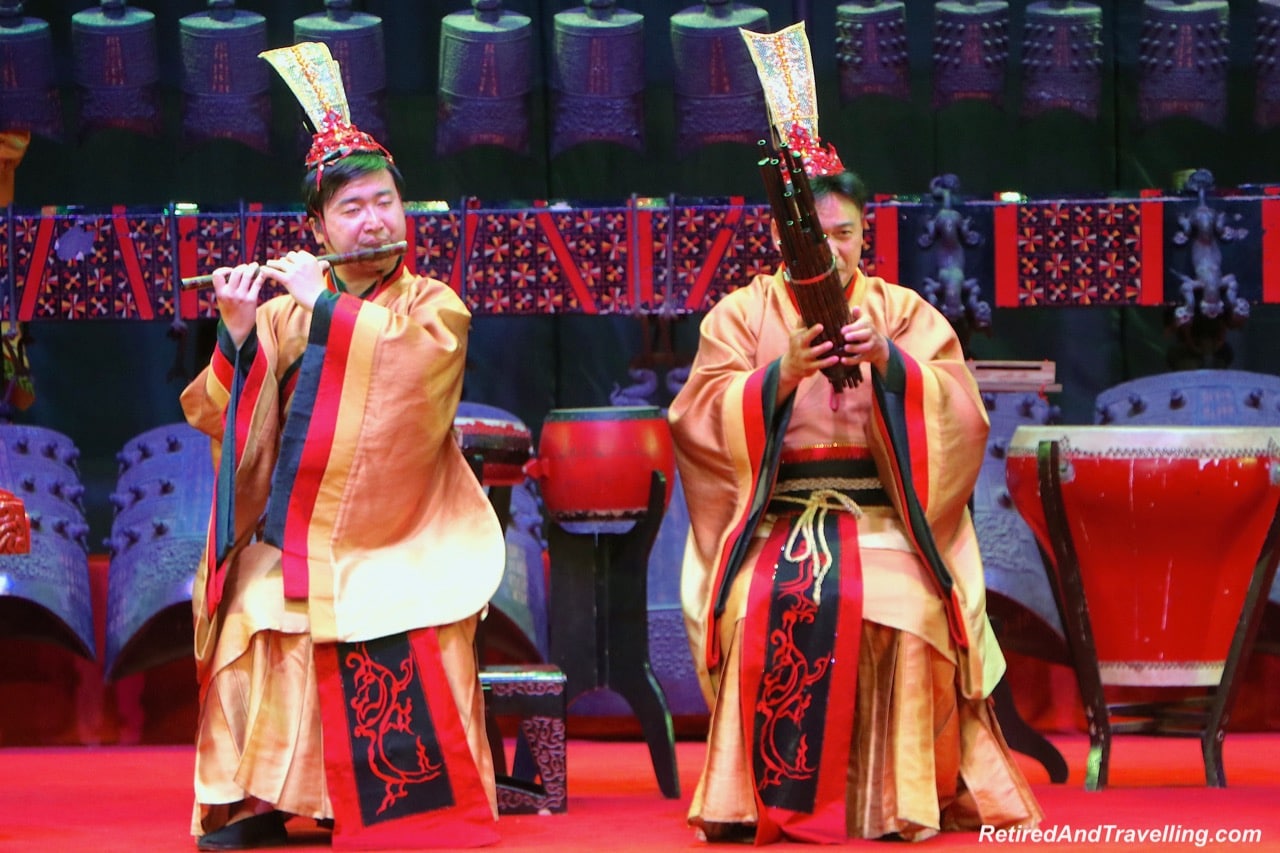 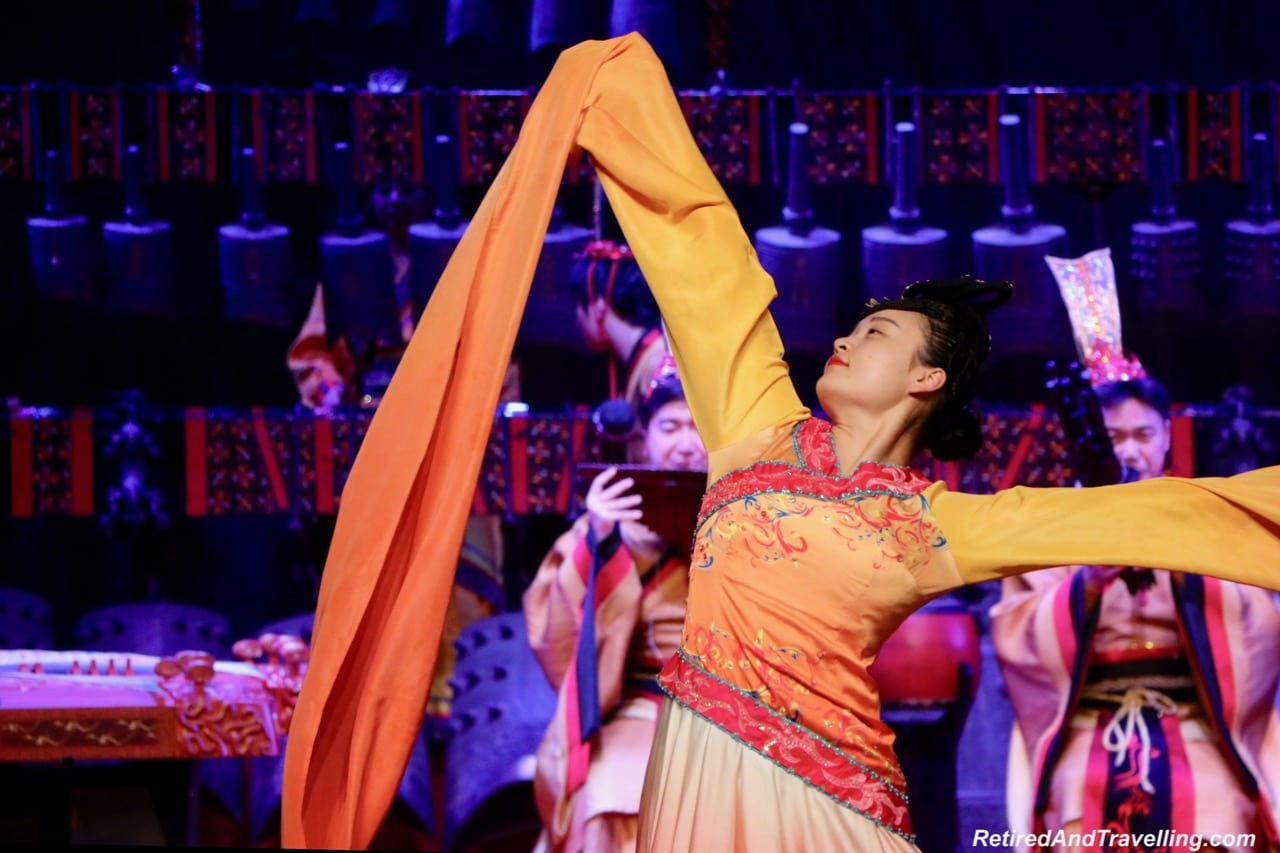 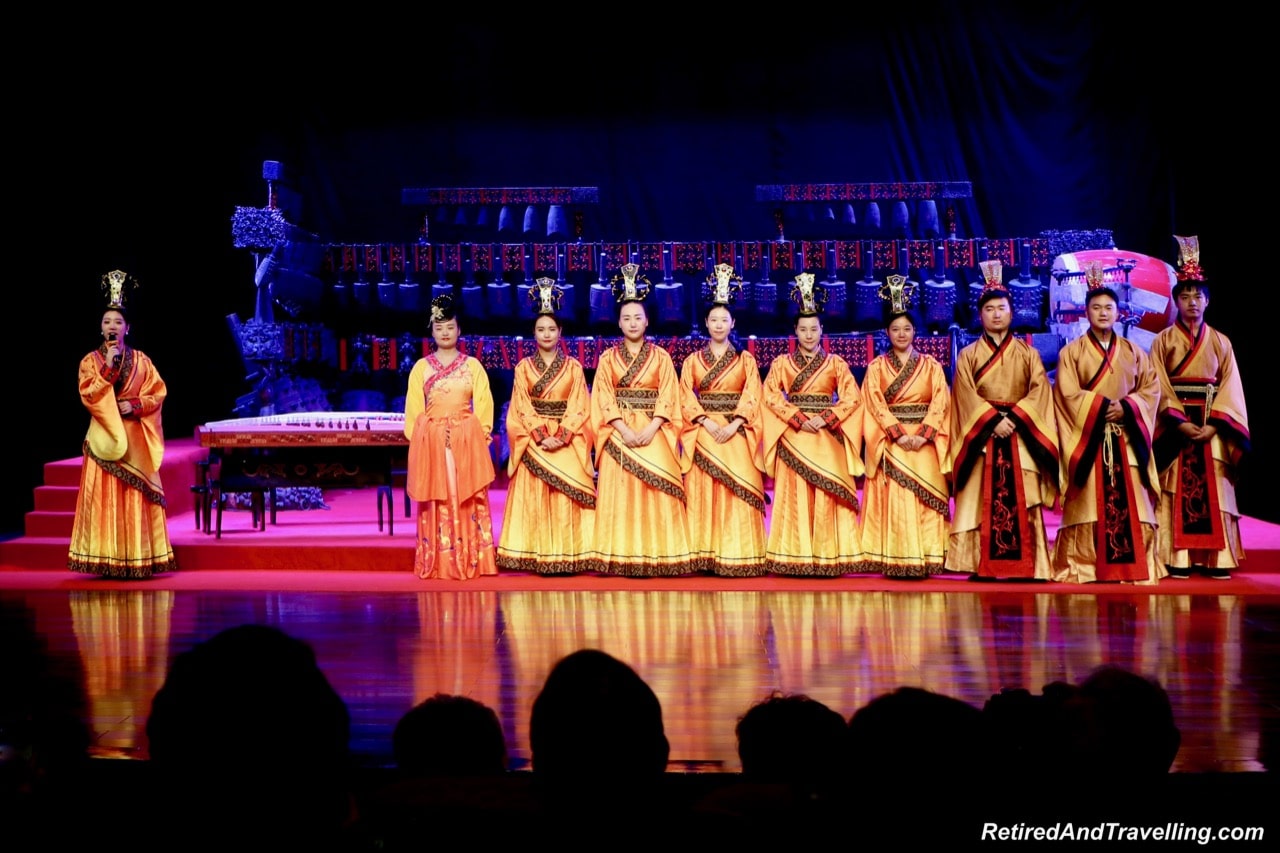 It was amazing that an instrument designed over 2,000 years ago could produce so many different sounds. The traditional Chinese music was played so beautifully. But we were also treated to a number of more modern tunes as well. Seeing this ancient Chinese performance was a great way to begin our cruise in Wuhan on the Yangtze River.

A Great Send Off From Wuhan

The bus took us to the cruise port. We boarded the Viking Emerald ship in Wuhan to cruise the Yangtze River in China with Viking Cruises. 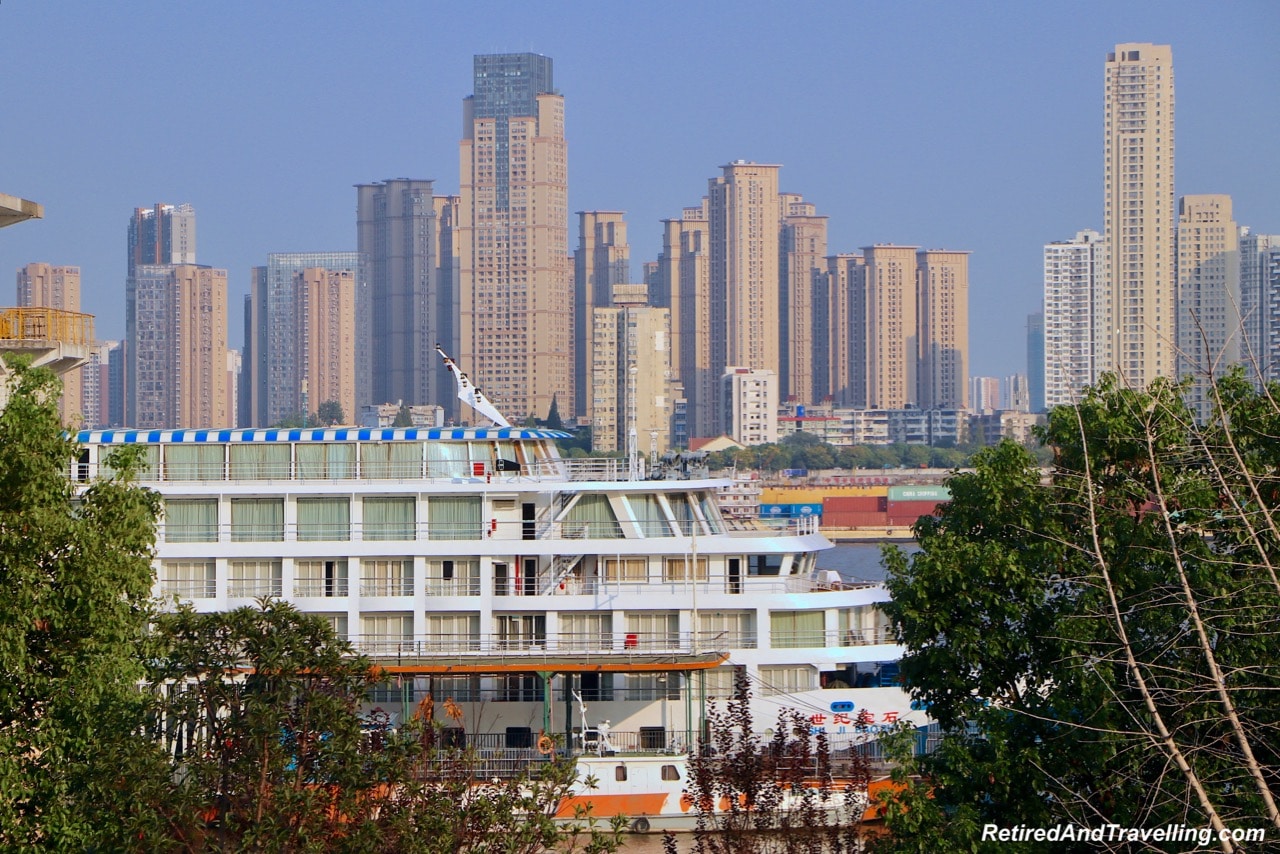 Both sides of the river were lined with massive skyscrapers. Wuhan has been called the “Chicago of China”. We certainly loved when we explored the architecture of Chicago. The Greenland Centre building was under construction. The Shanghai Tower in Shanghai is currently the tallest building in China. But the Greenland Centre will be even taller. This competition for taller and more interesting buildings reminded us so much of our visit to Dubai. 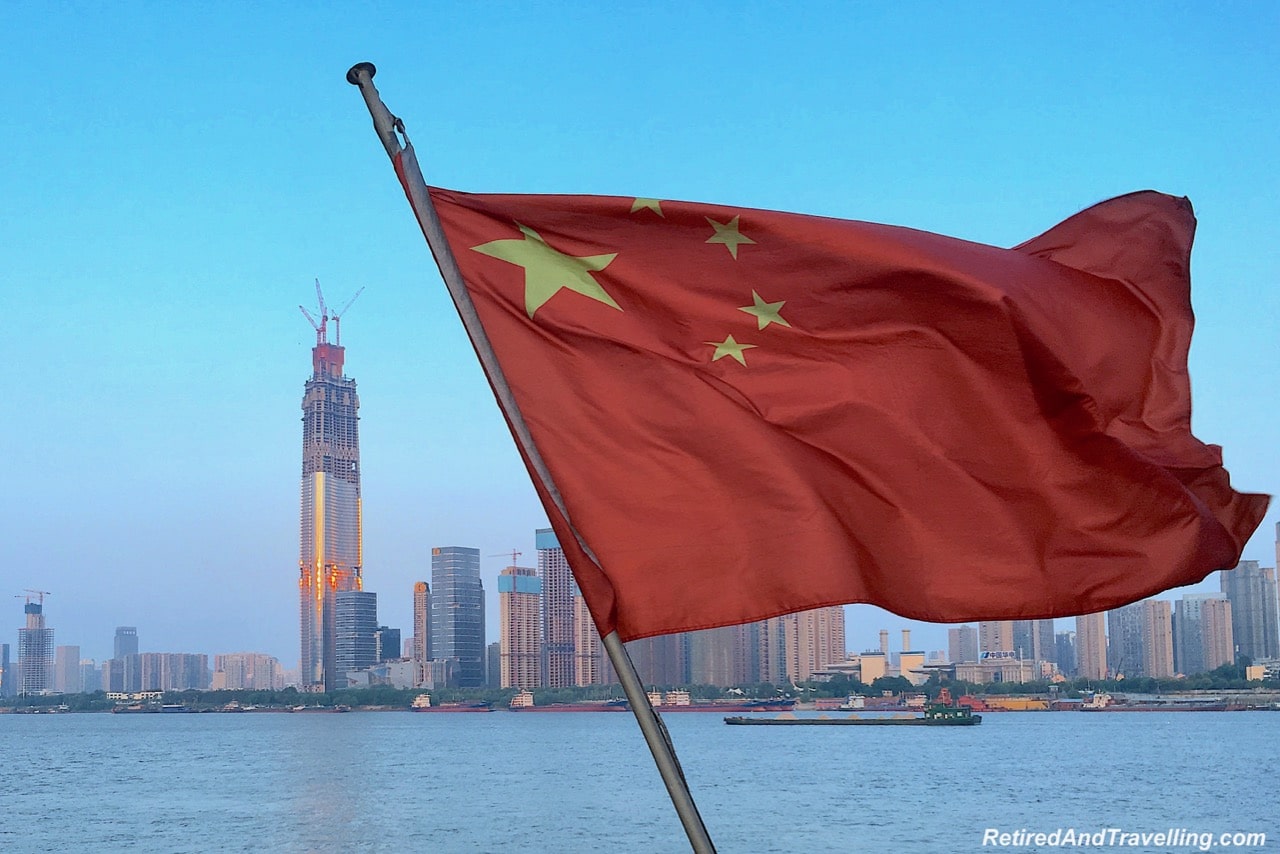 We watched as the sun set over the buildings of Wuhan! 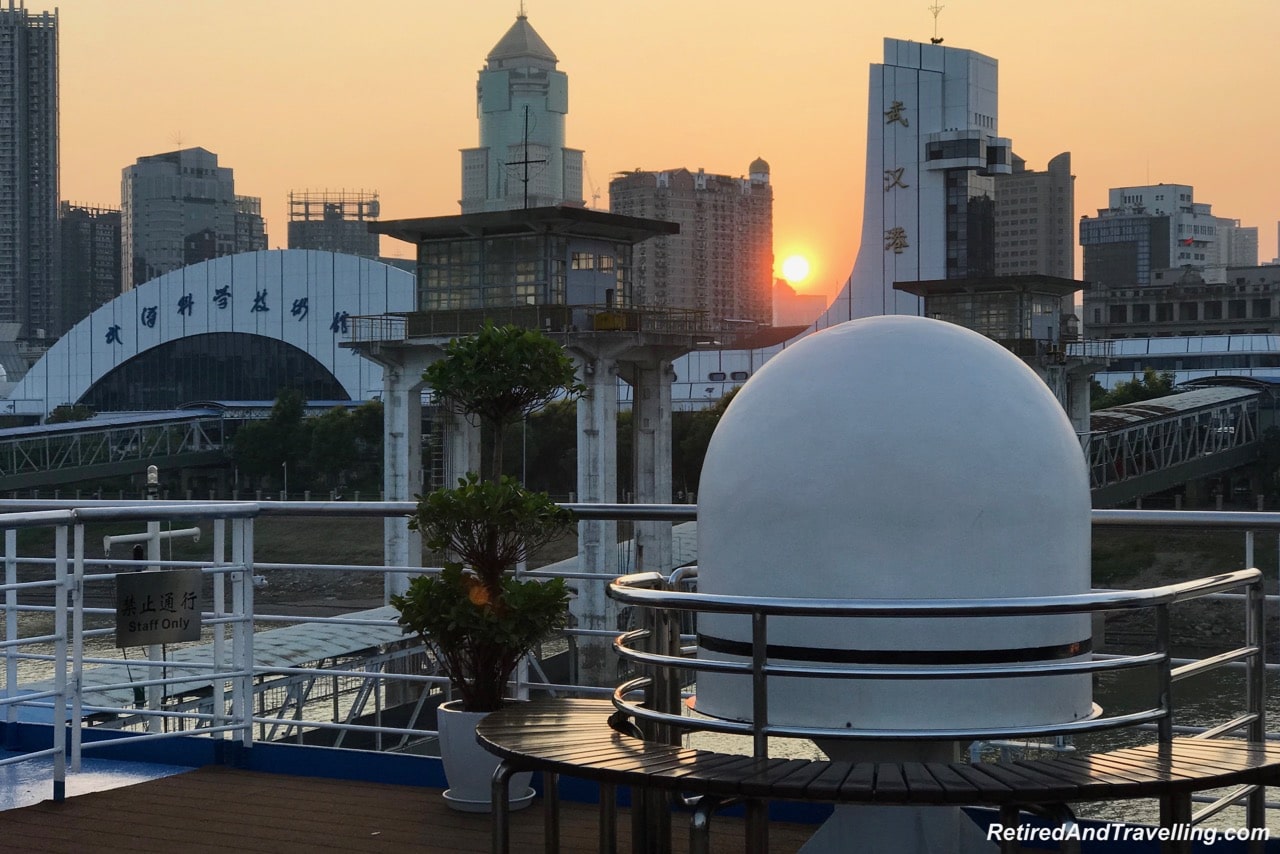 More Of The Great Night Light Shows Of China

We got the first taste of night light shows on our visit to Shanghai. The night light show in Wuhan did not disappoint. It was spectacular and covered both banks of the Yangtze River. Neon lights changed colour and created colourful shapes on virtually all buildings along the shore. 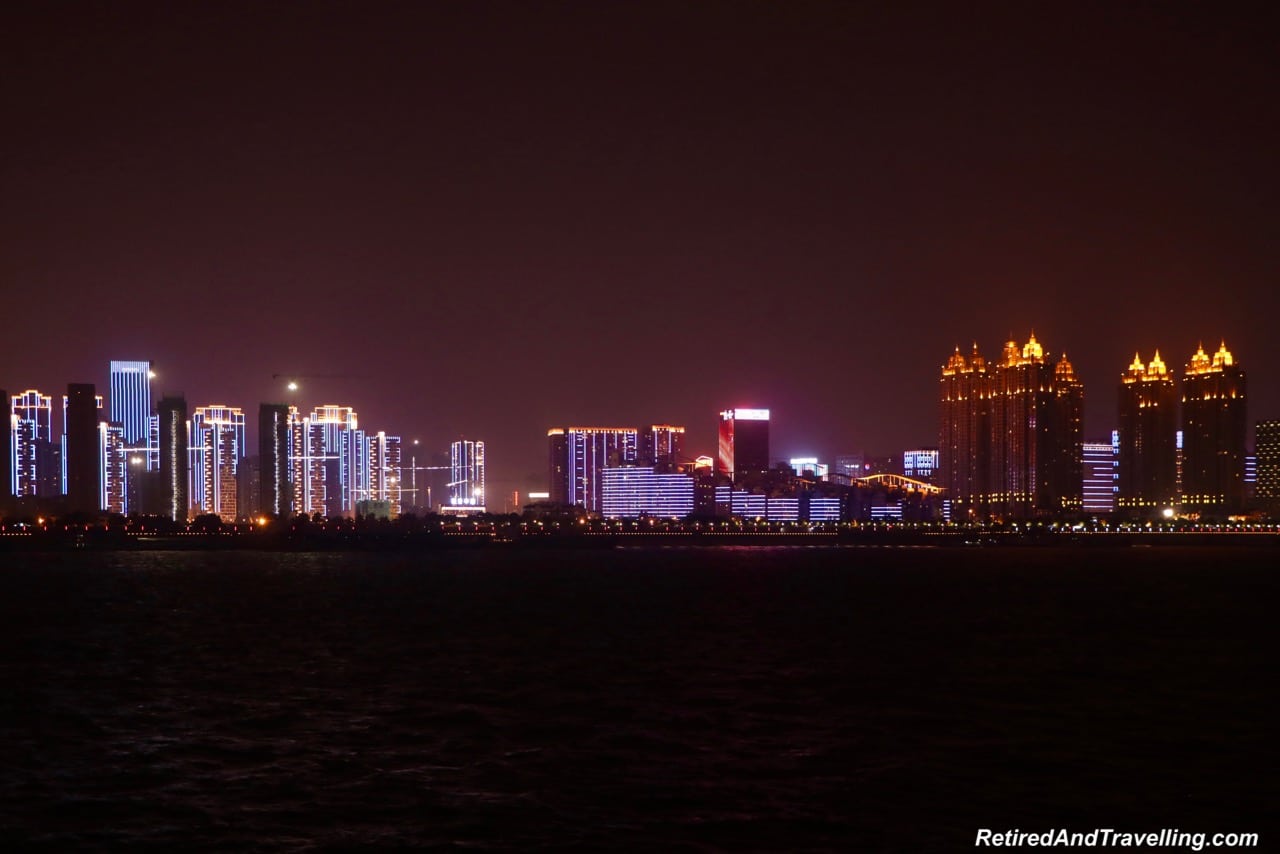 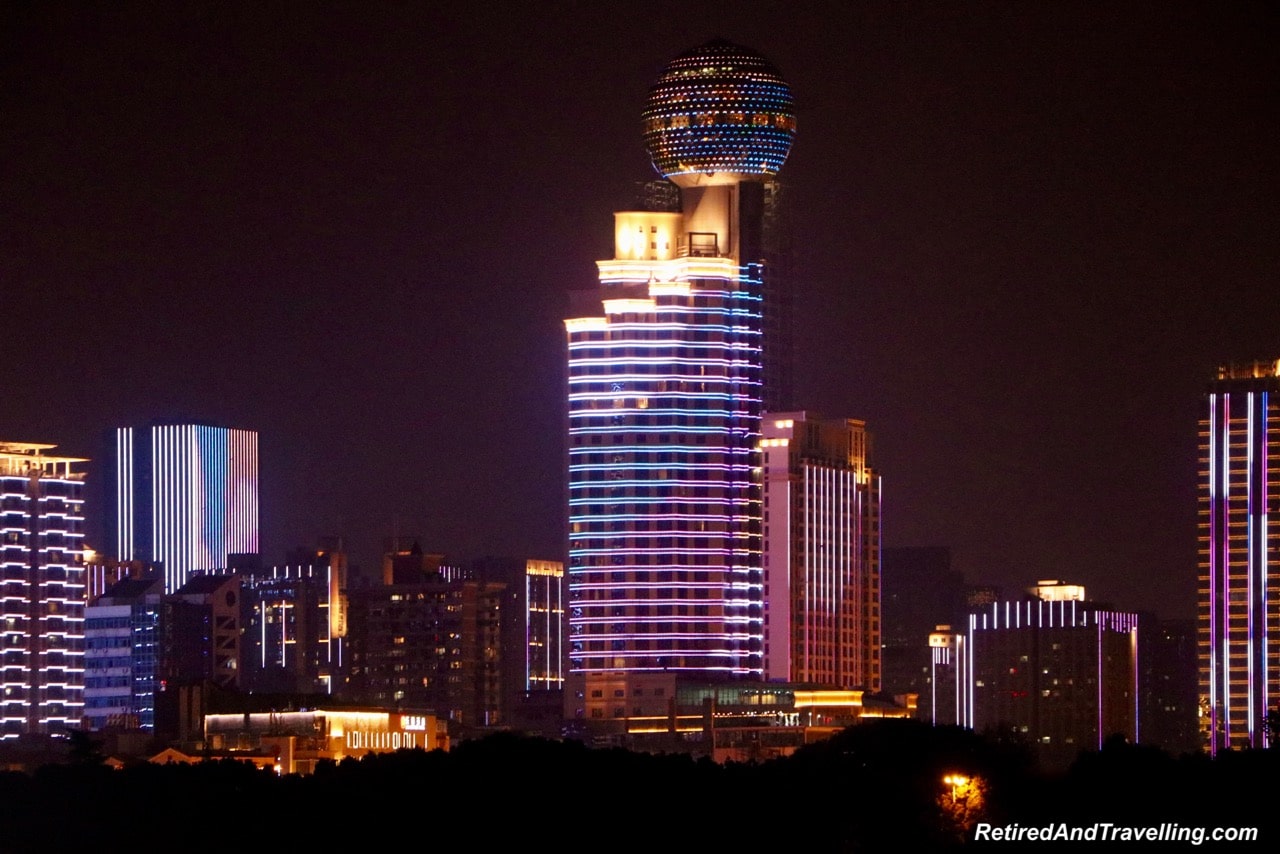 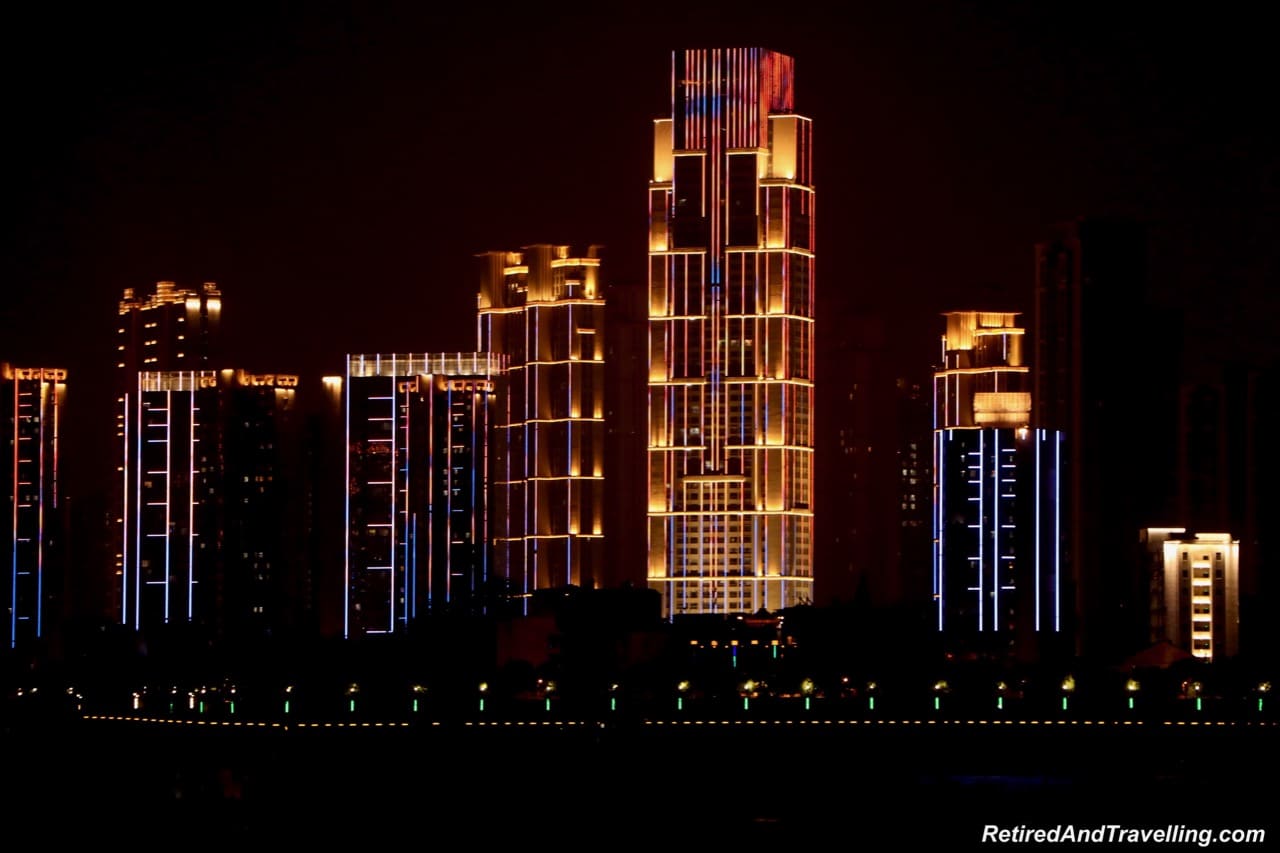 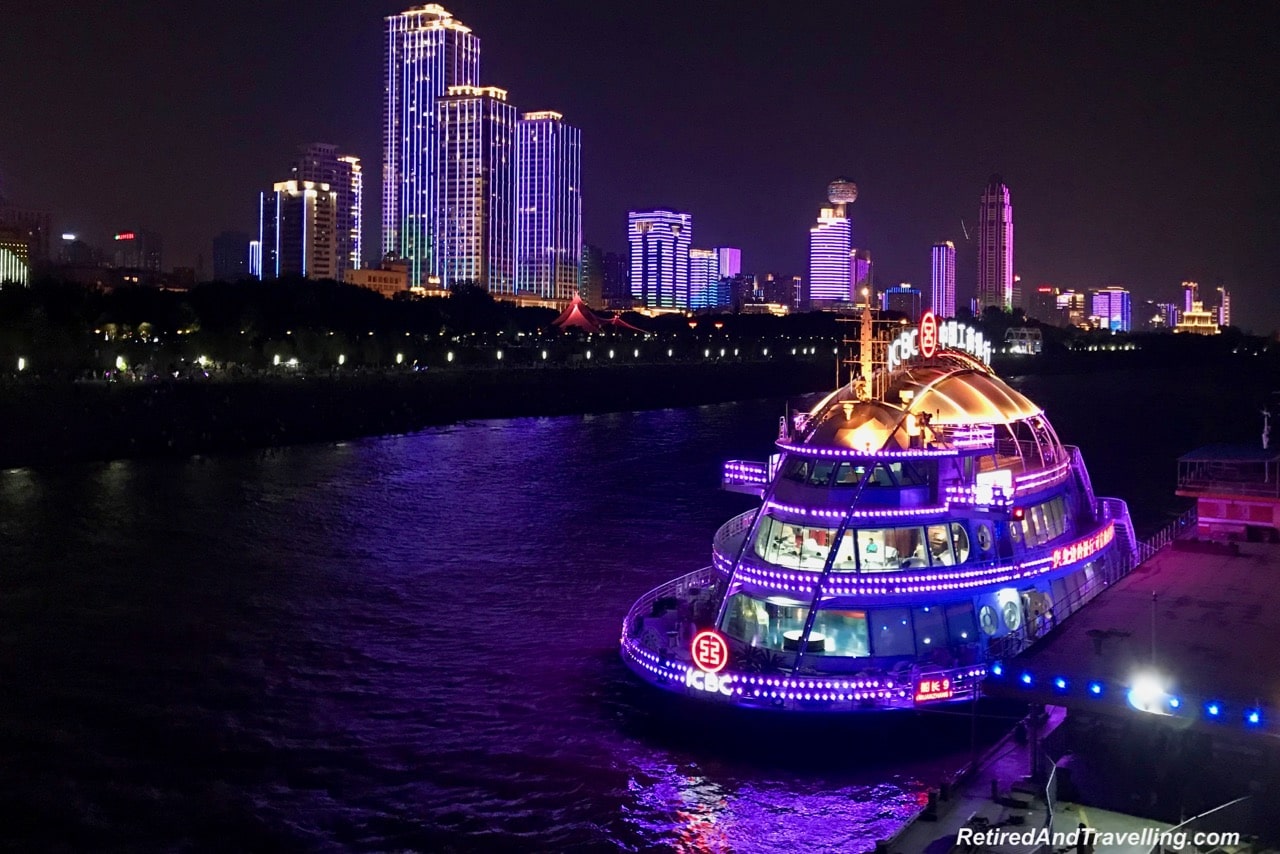 The night light show in Wuhan was a great sight to send us off on our cruise. This is definitely a sight not to miss in Wuhan on the Yangtze River.

We Started Our Cruise In Wuhan On The Yangtze River

We enjoyed our week in Shanghai. But we were excited when we reached Wuhan on the Yangtze River. It was time to start our river cruise in China with Viking Cruises.

But we loved the chance to spend a little time in Wuhan. A visit to the Hubei Provincial Museum to see the Marquis Yi of Zeng exhibit was a great treat. It was amazing to see the 64 bell chimes made over 2,000 years ago. And it was a treat to get a musical display to hear what these bells and other traditional instruments sounded like.

A sunset and then a great night lights show was a great send off to cruise the Yangtze River with Viking Cruises.

Did you start your cruise in Wuhan on the Yangtze River in China? Did you get a chance to explore the city and maybe see the Marquis Yi of Zeng exhibit? 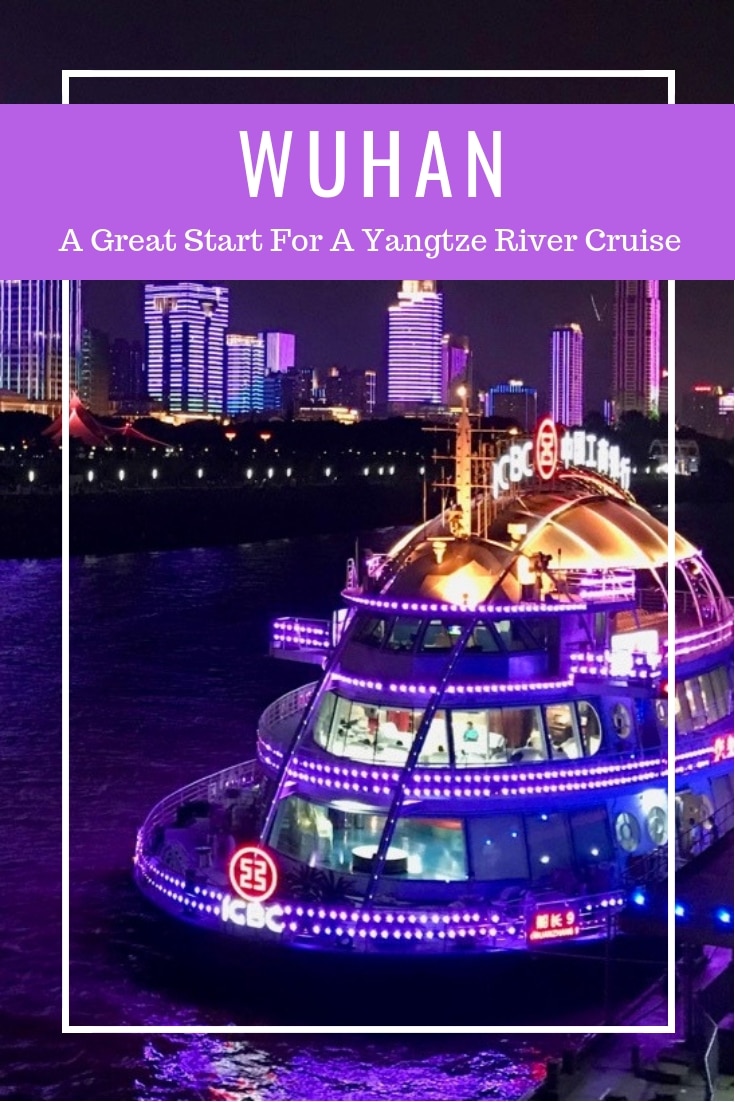 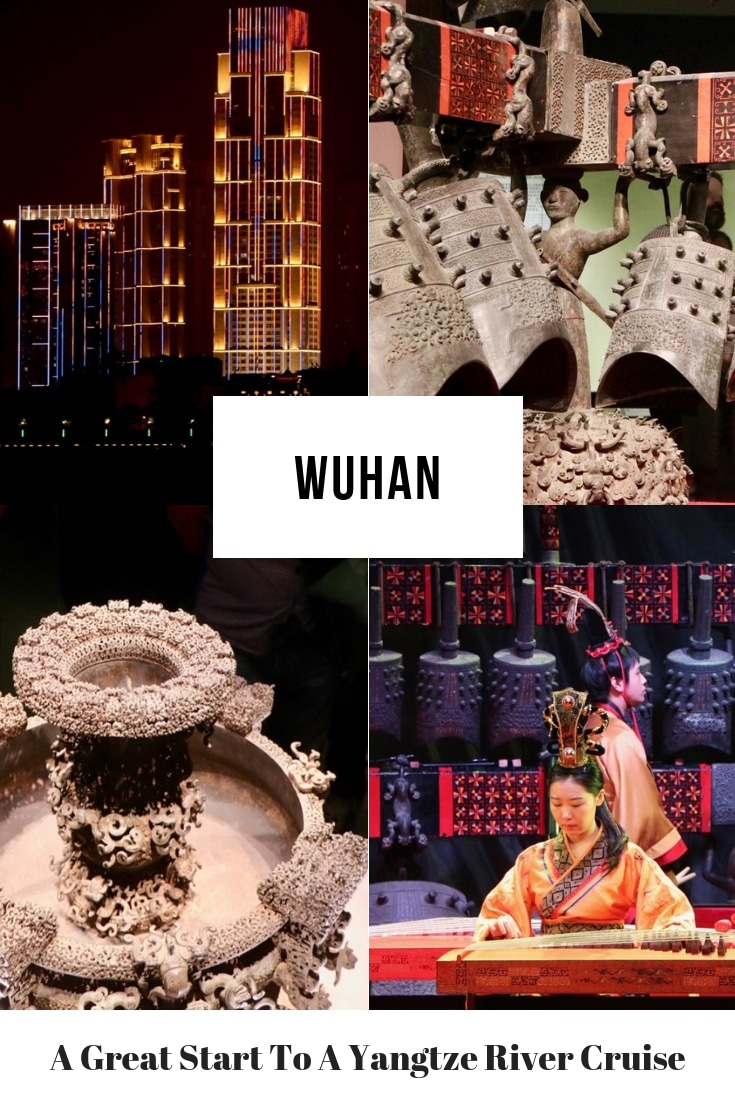