We Headed For The Hoodoos At Bryce Canyon National Park

We found so much more than just hoodoos at Bryce Canyon National Park. When we finished our stay in Moab in Utah, we travelled along Scenic Byway 24 and through Capital Reef National Park. Along the way we got our first view of hoodoos. But it was definitely not the last.

When we drove through the Bryce Canyon National Park, we stopped at many of the viewpoints. There were vast vistas, we hiked to see a beautiful arch and of course we saw the amphitheater of hoodoos. So many things to see in one day.

After a one night stop in Richfield, we headed down Utah state highway 89 to Bryce Canyon National Park. By 9am, we reached the rock arch before the turnoff into the park. Even this early, there was a lineup to get into the park in early October. 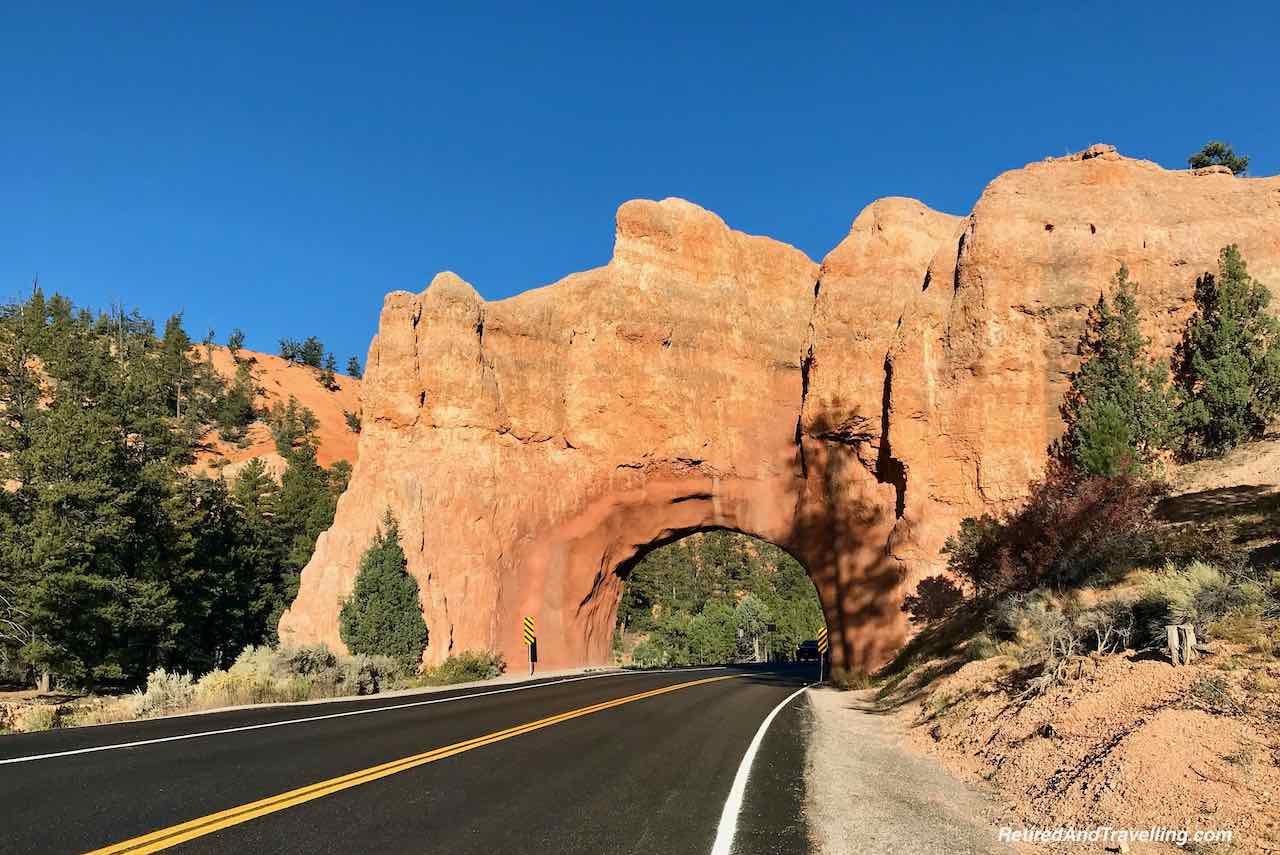 We stopped briefly in the Visitors Centre. It was interesting to see the posters that explained how the formations in this area were created. Most people know Bryce Canyon for the hoodoo formations. These thin spires of rock are created when a pinnacle of rock eroded over time. Different types of rock eroded at different rates and created the different shapes and colours. We saw similar formations when we visited the Goblins Valley state park. 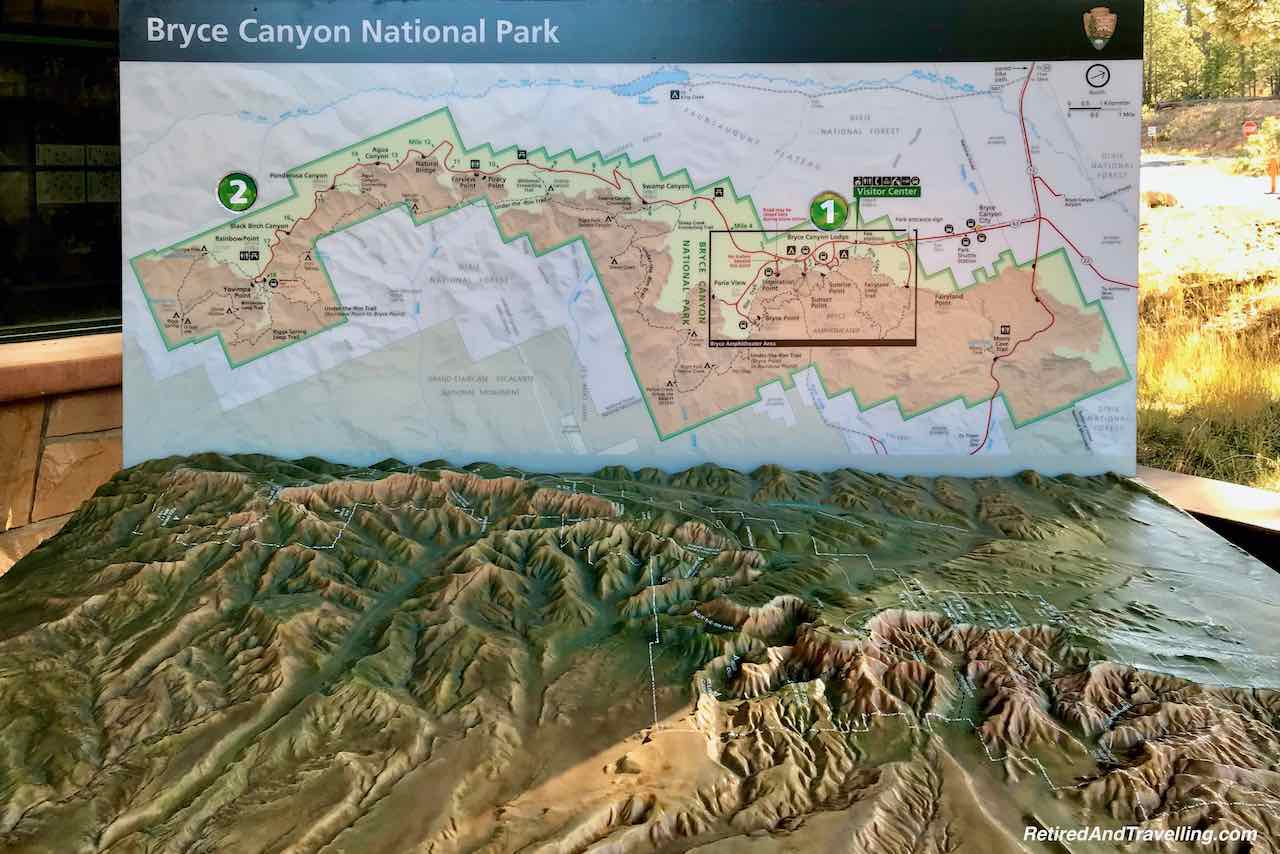 On our visit to the Utah National Parks, we spent a lot of time at high altitudes. This park took us up over 9,000 feet. We were surprised to learn that this was higher than Machu Picchu. There were warnings about altitude sickness in the Visitors Centre. Being aware of the altitude was certainly something we learned with on our visit to Utah and Arizona. But the altitude sure gave us great blue skies!

There was a shuttle bus that took people around to the viewpoints in the park. Unlike on our visit to Zion National Park, the shuttle bus was not mandatory. We chose to drive the scenic path and gave ourselves more flexibility. But when the park was very busy, the shuttle was easier than finding parking.

With our map in hand, we headed off to explore the hoodoos at Bryce Canyon National Park.

Our First Stop At Bryce Point

We headed into the park and made the turn that took us towards Bryce Point. We figured that this was the perfect place to get our first view of the hoodoos at Bryce Canyon National Park.

It was a short walk along a paved path to get to the viewpoint. The view out was indeed a stunning vista. Everywhere we looked there were hoodoos. In the distance we saw red hills that had not yet eroded. With his zoom lens, David studied the details. 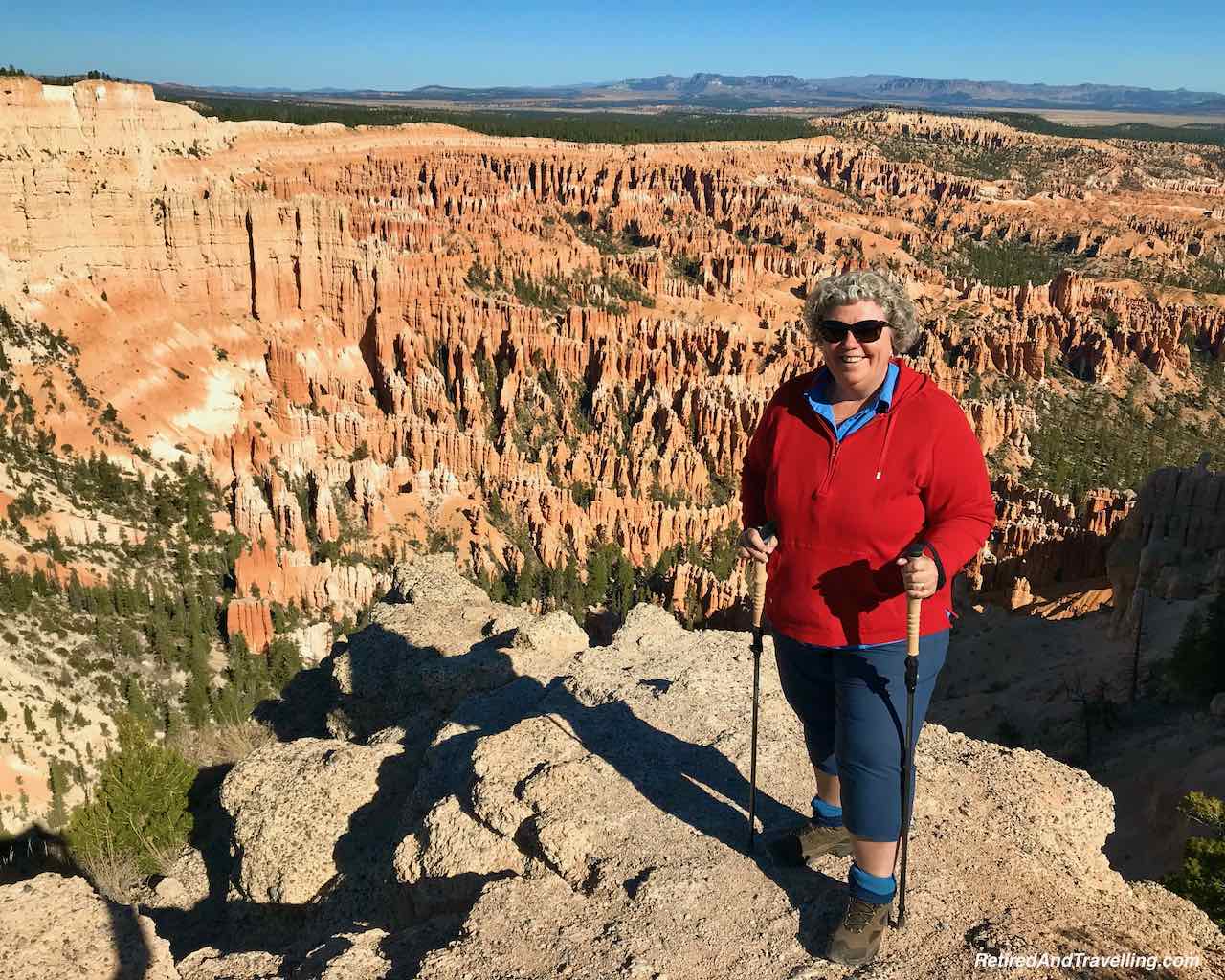 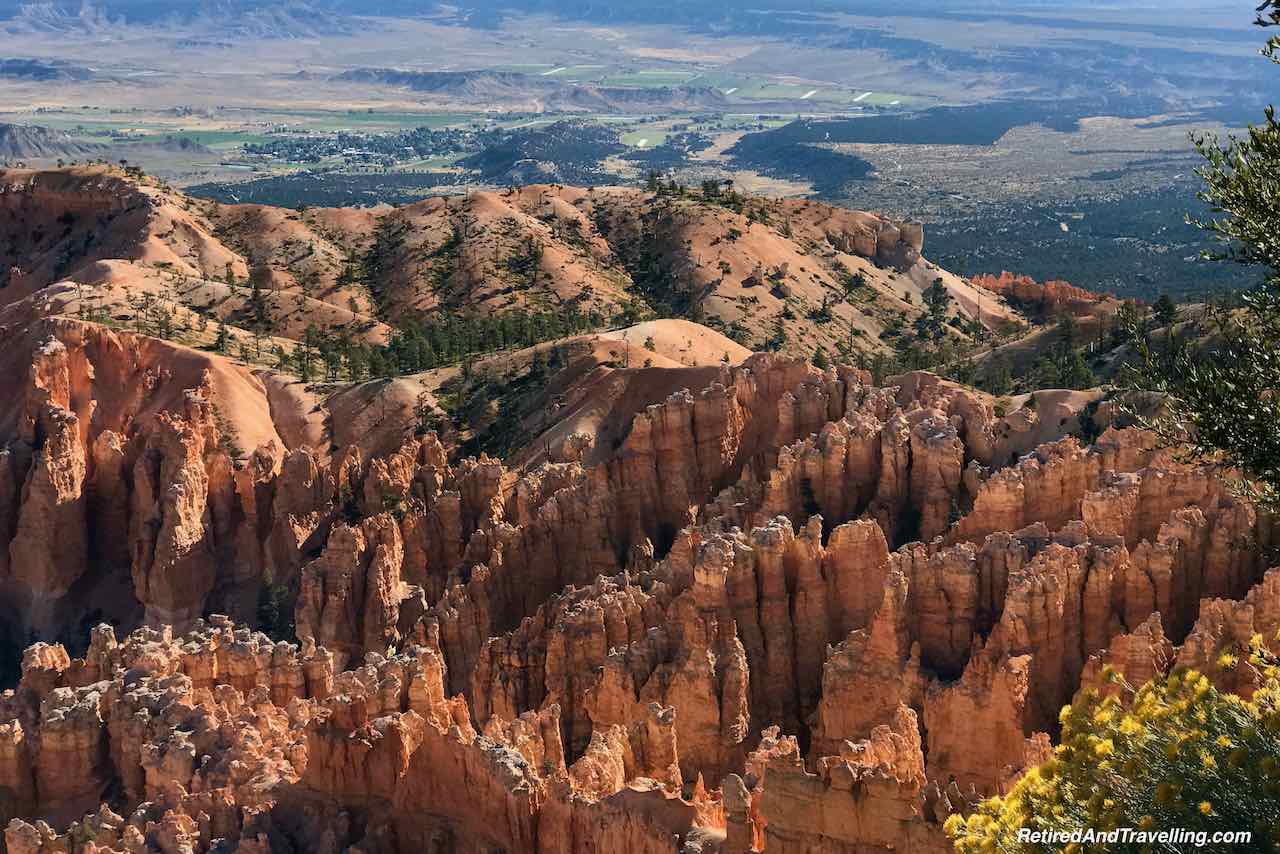 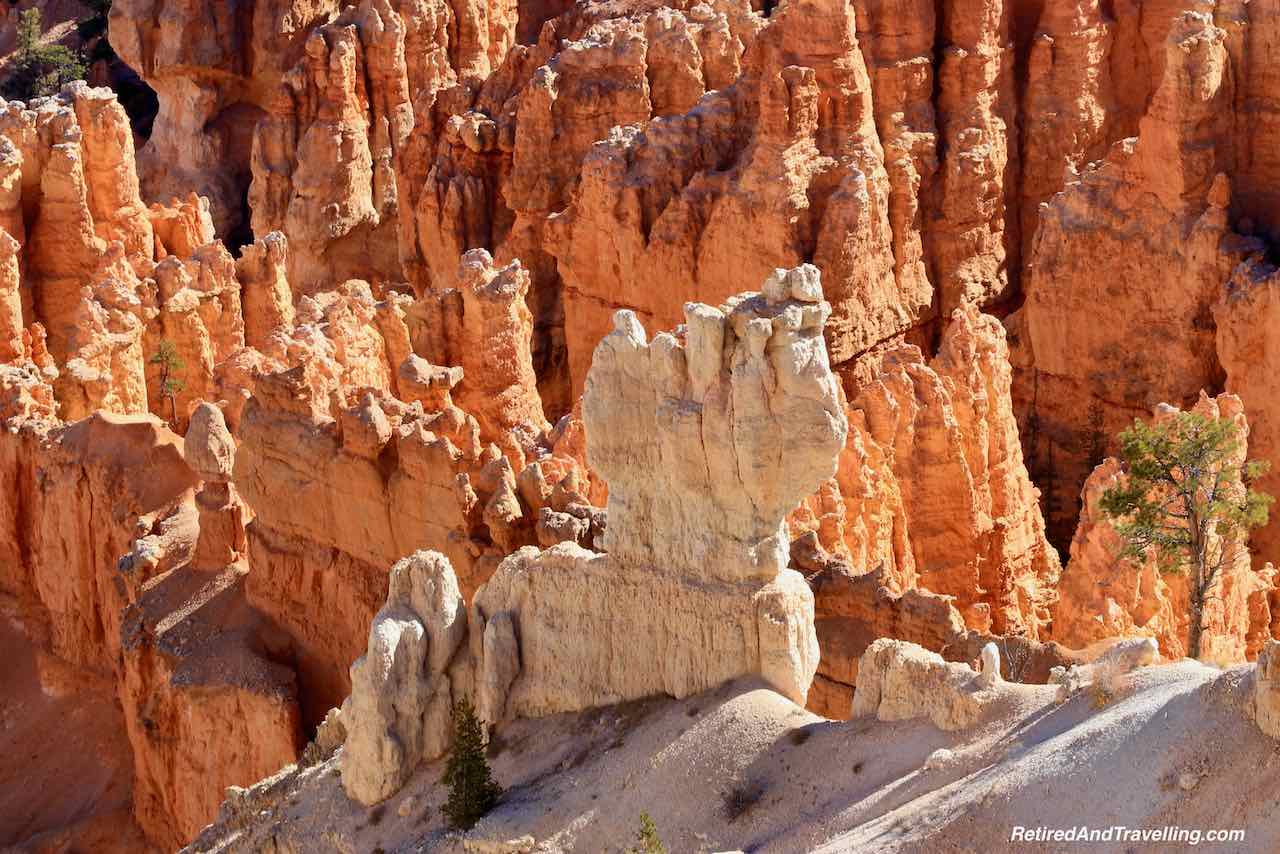 In some directions the rock was a much lighter colour. We saw the early erosion starting to form the hoodoos. 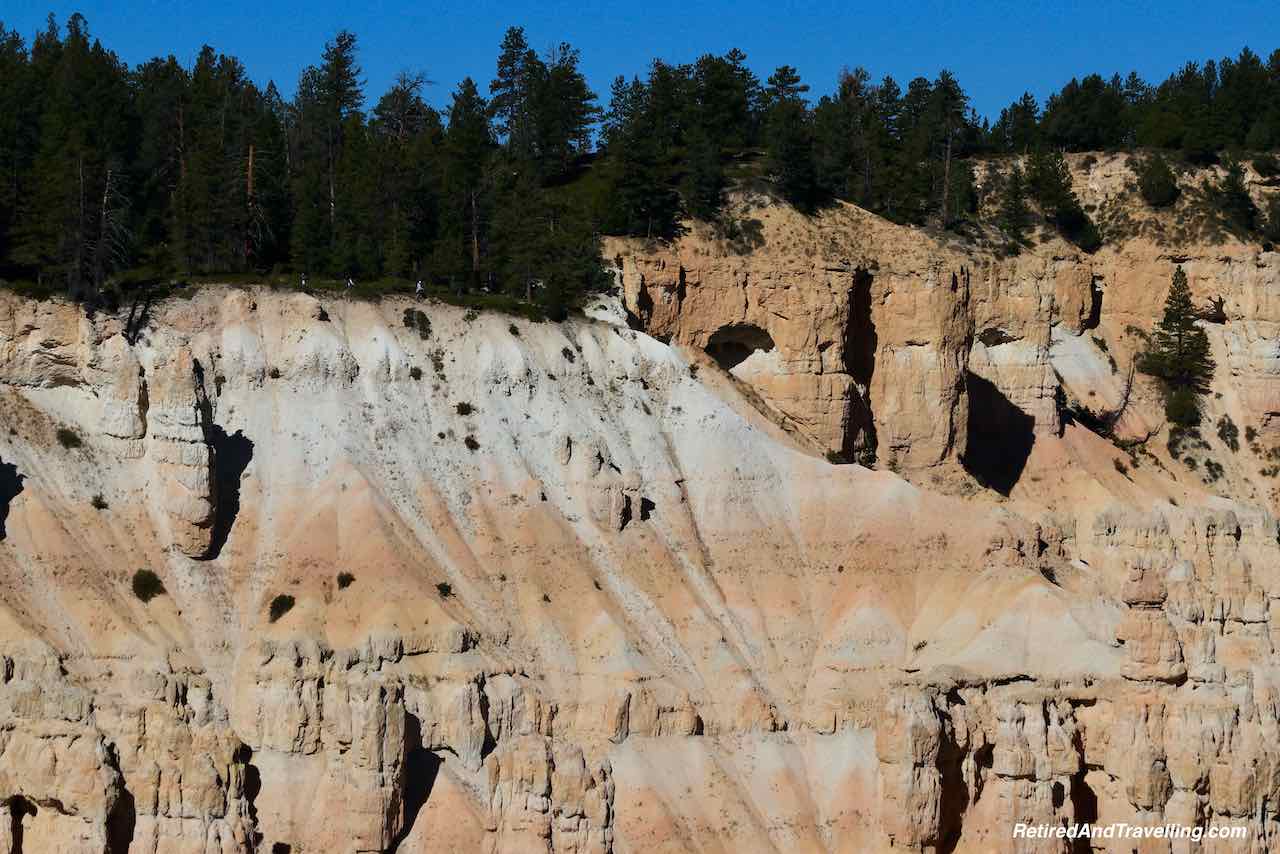 This first view was a stunning reminder of why we visited Bryce Canyon. And we knew there was so much more to see.

The Far End Of The Scenic Route At Rainbow Point

We studied the map and plotted the rest of our route for the day. Our next point was at the last stop on the scenic route. And we worked our way back from there. We parked at Rainbow Point and headed out for our next vista. 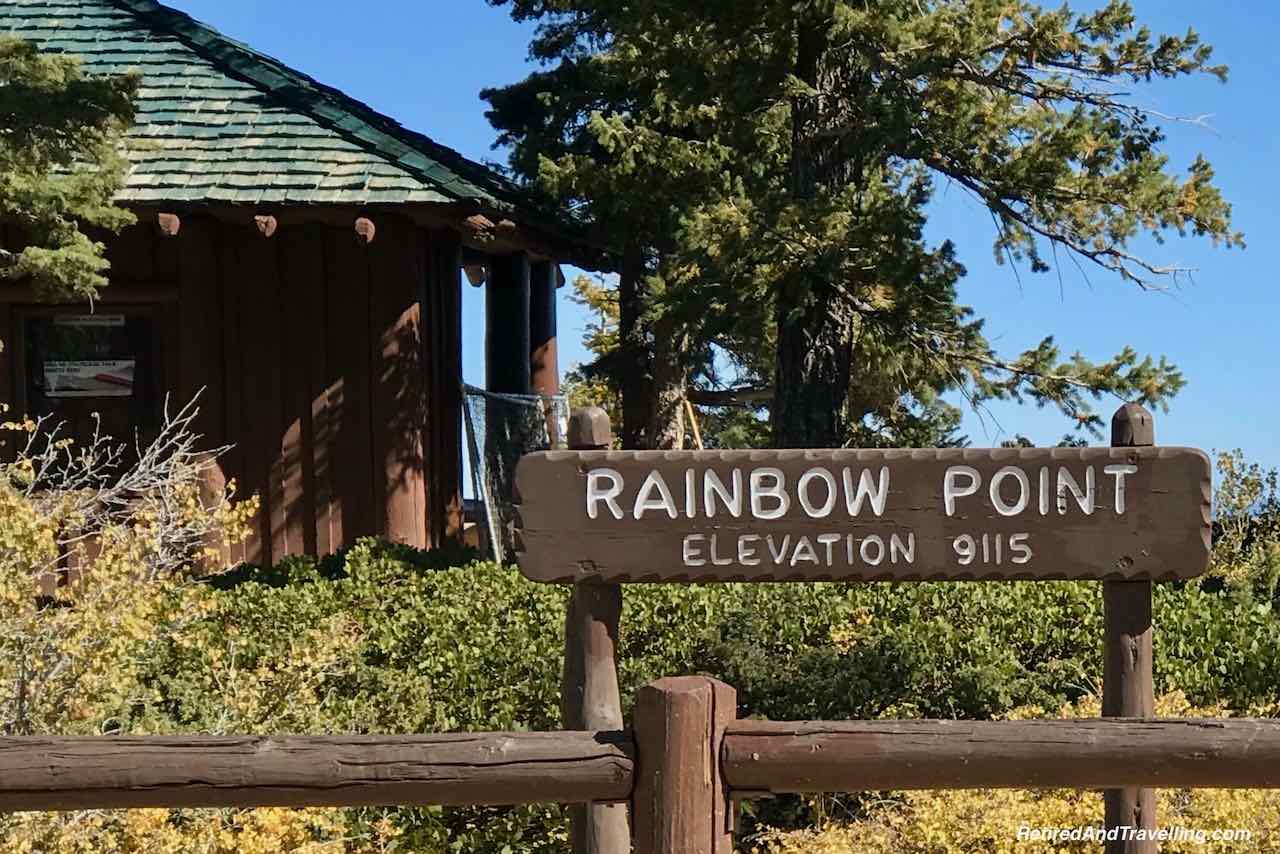 The view was a bit different here. We still saw the red rock and hoodoos. But spread before us was a wider vista of low rolling hills covered in green trees. 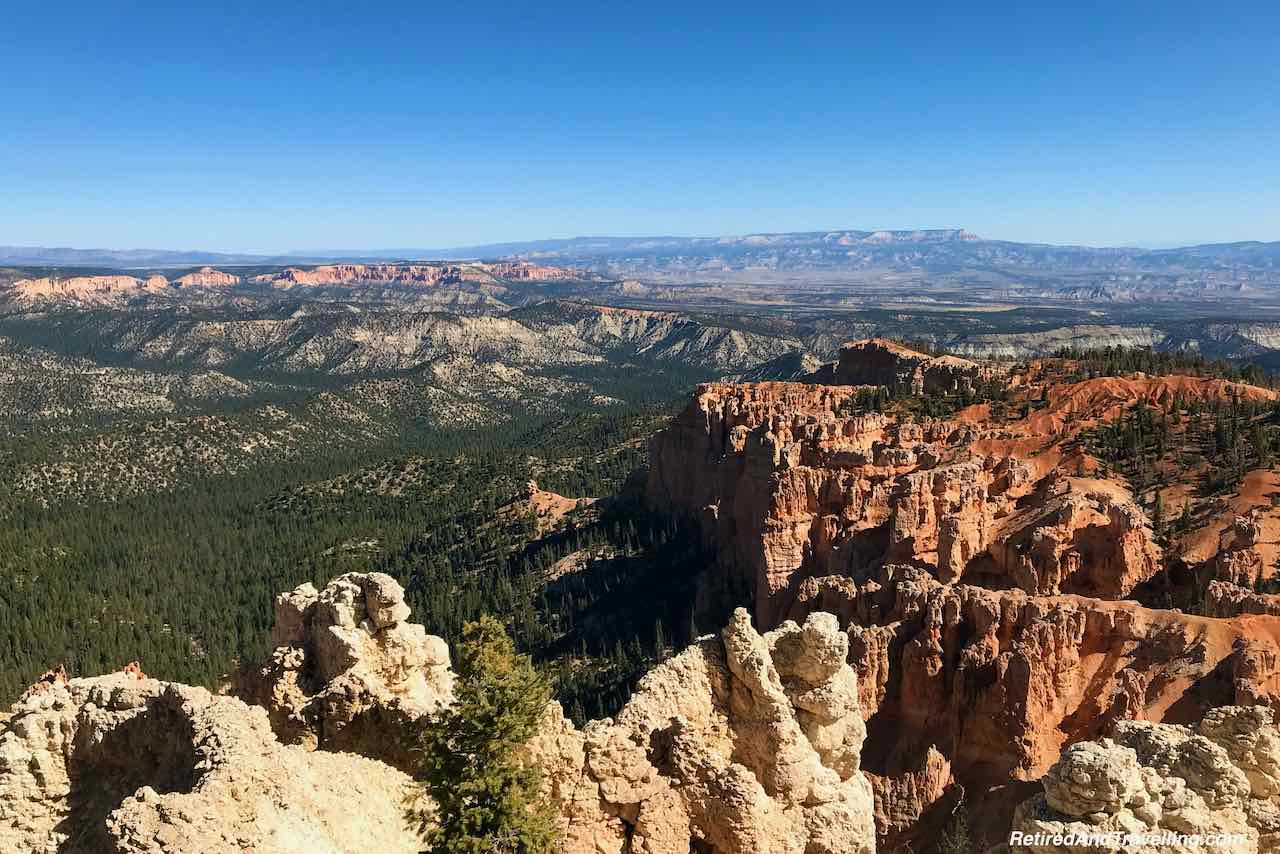 From Rainbow Point, we walked around the Bristlecone Loop Trail. Part of the trail wound though the woods. Parts of the path were along edge. I was glad I had my hiking poles with me. Below us were the longer hiking paths for Under the Rim Trail and the Riggs Spring Loop Trail. We did not have time to take these longer hikes on this visit to Bryce Canyon. 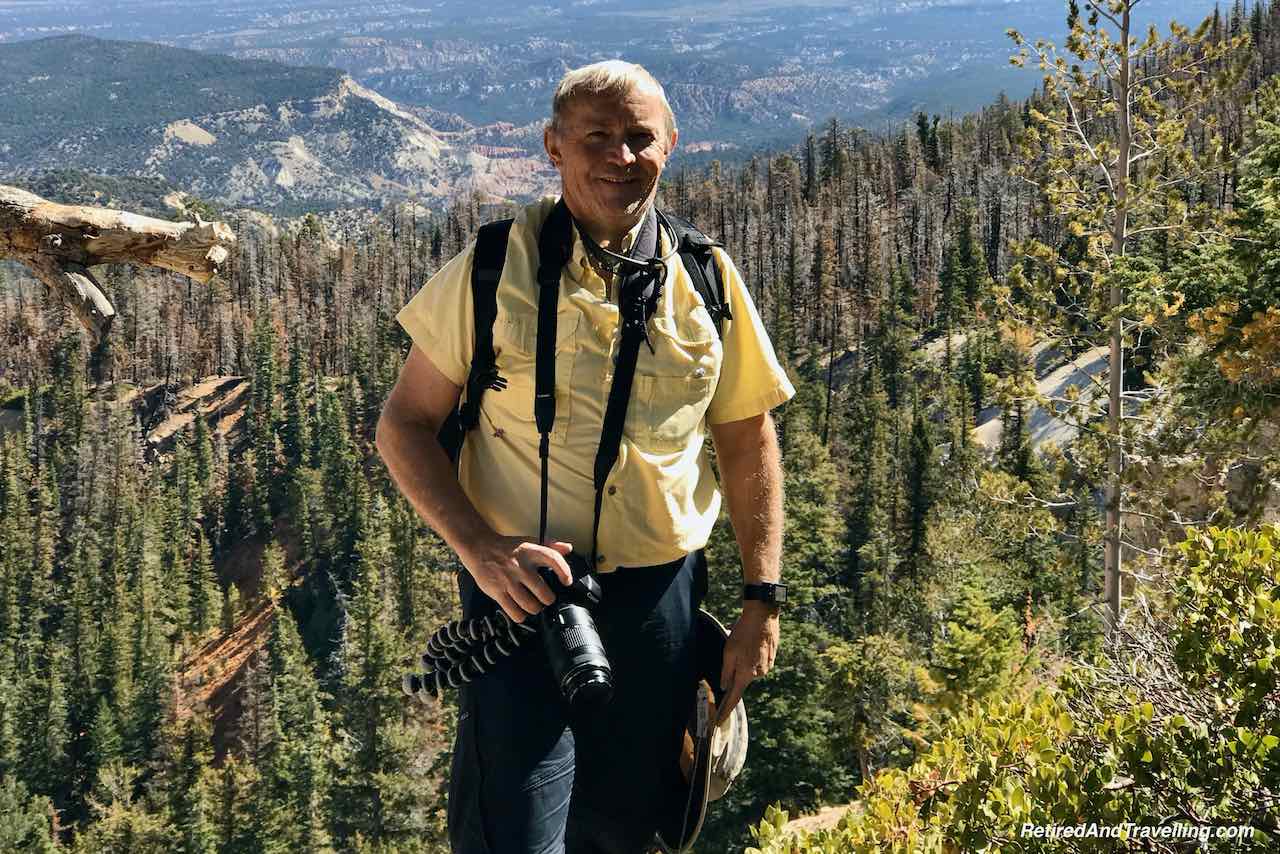 At the end we reached Yovimpa Point. We stopped to look back along the ridge of red rock towards Rainbow Point. 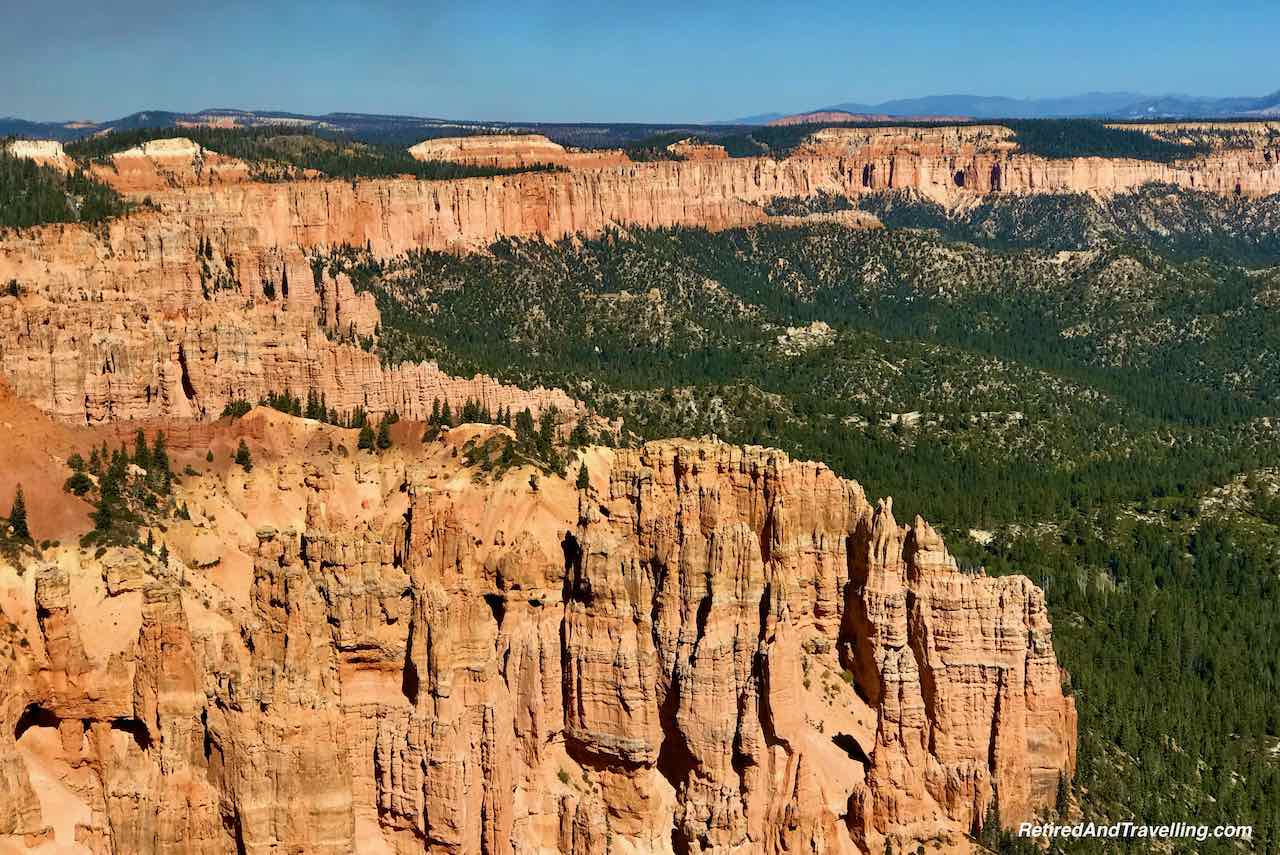 It was interesting to see more than just hoodoos at Bryce Canyon National Park on this stop.

We pulled in at the Black Birch Canyon viewpoint. This provided another view out over the green rolling hills. When we walked to the sides, we got a view of the sharp red rock hoodoos. 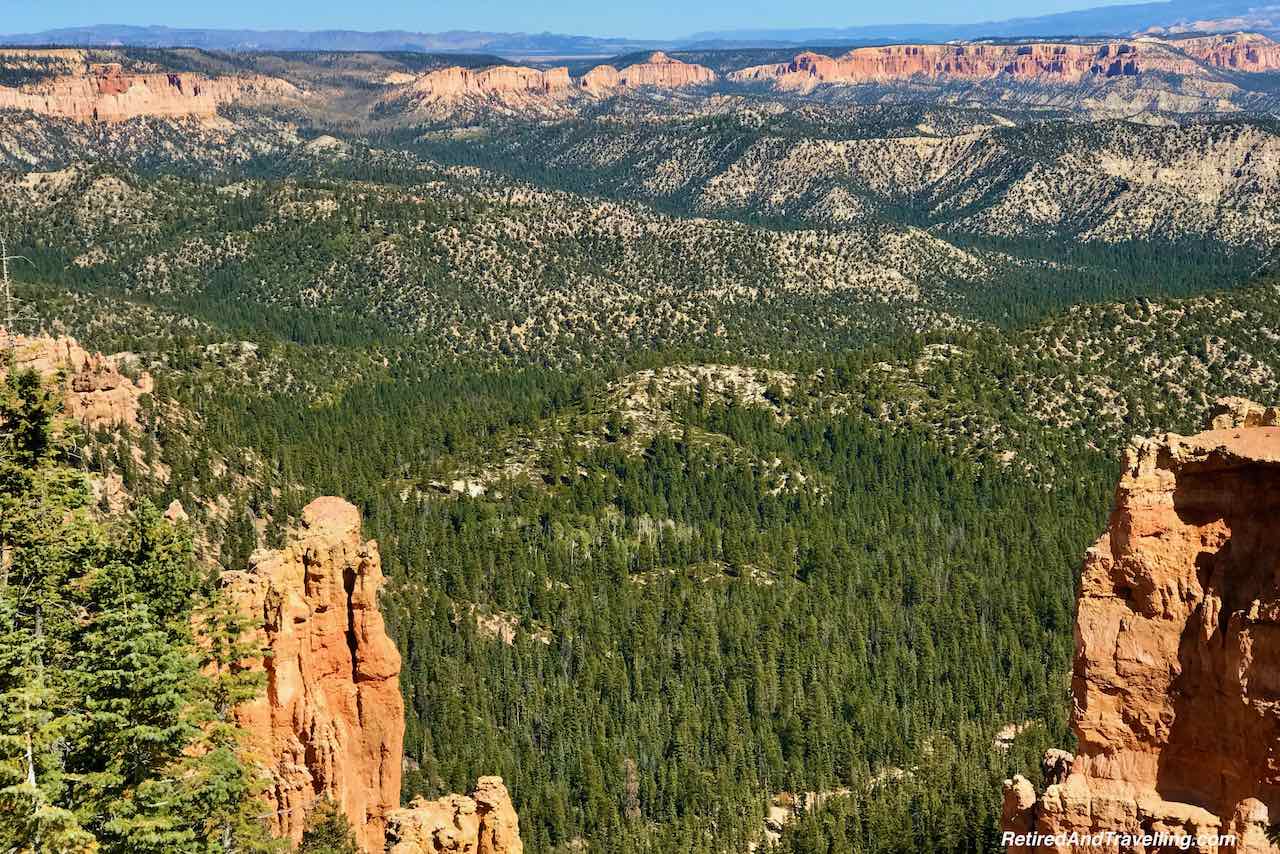 Ponderosa Point provided us with a view down the red rock canyon walls. We saw the early stages of weathering that would create the individual pinnacles. 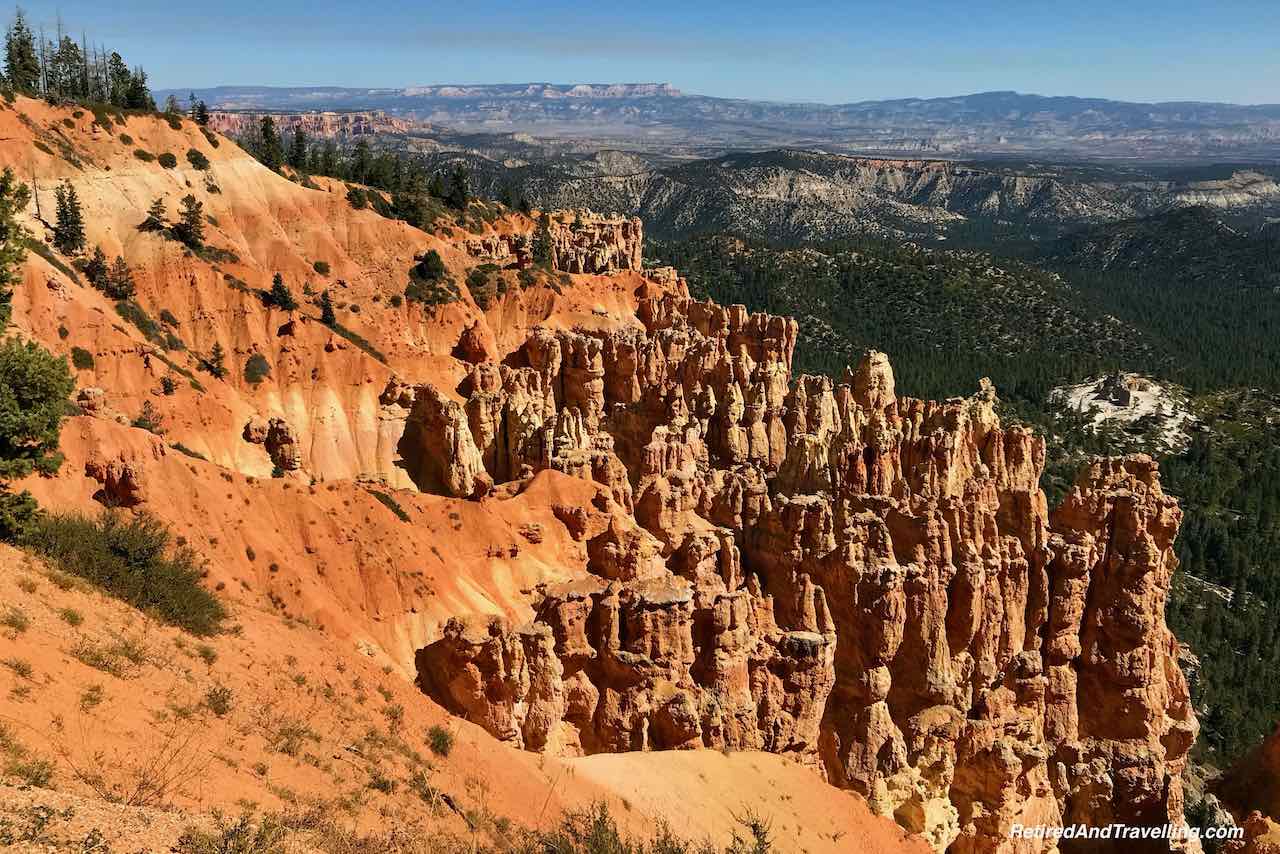 Agua Canyon showed us some interesting rock formations. Walls of pinnacles forming and individual hoodoos caught our eye. The individual ones reminded us of the fun formations we found when we visited Goblins Valley on our trip to Capitol Reef National Park. 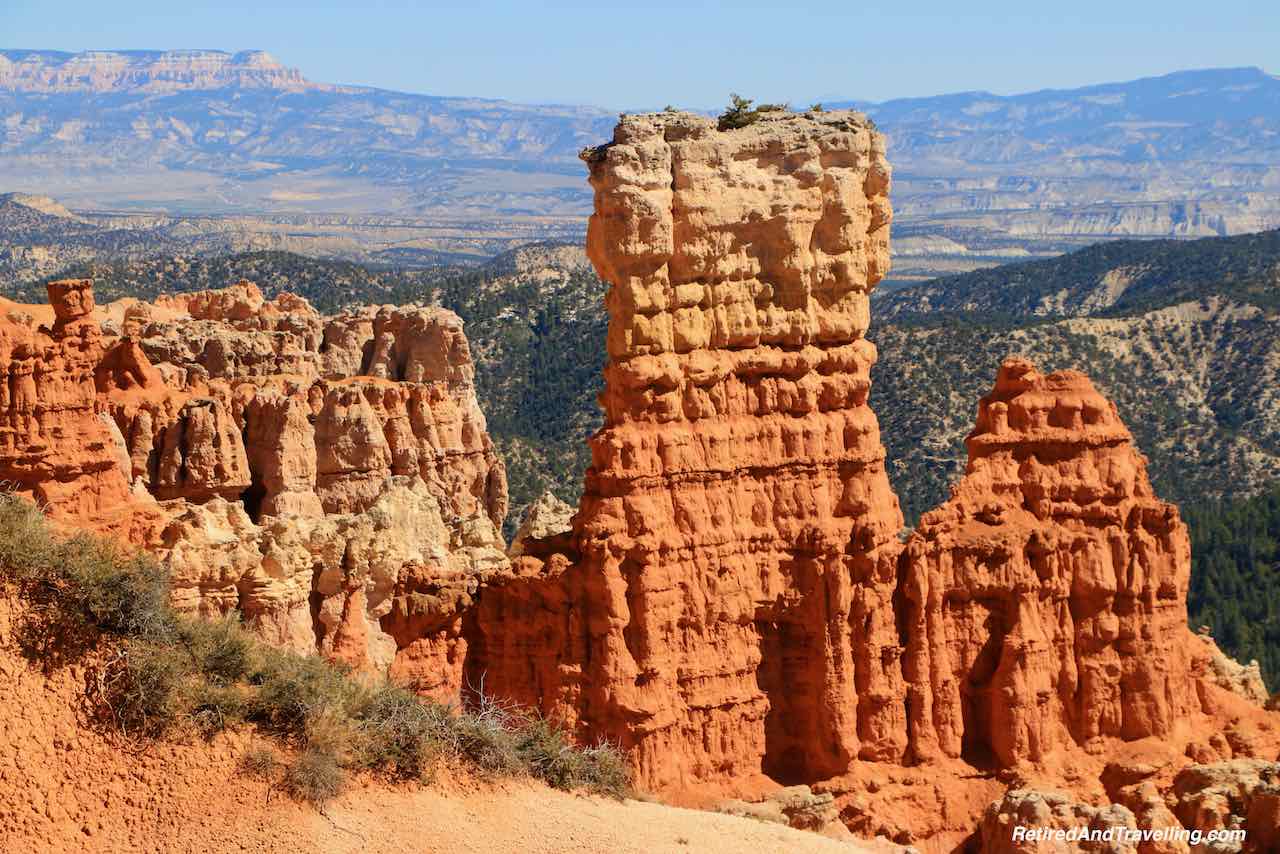 At the next stop, we took out our hiking poles for a short walk across the rocky surface to see the Natural Bridge. We saw so many amazing arches when we visited Arches National Park. So we did not want to miss this one at Bryce Canyon. 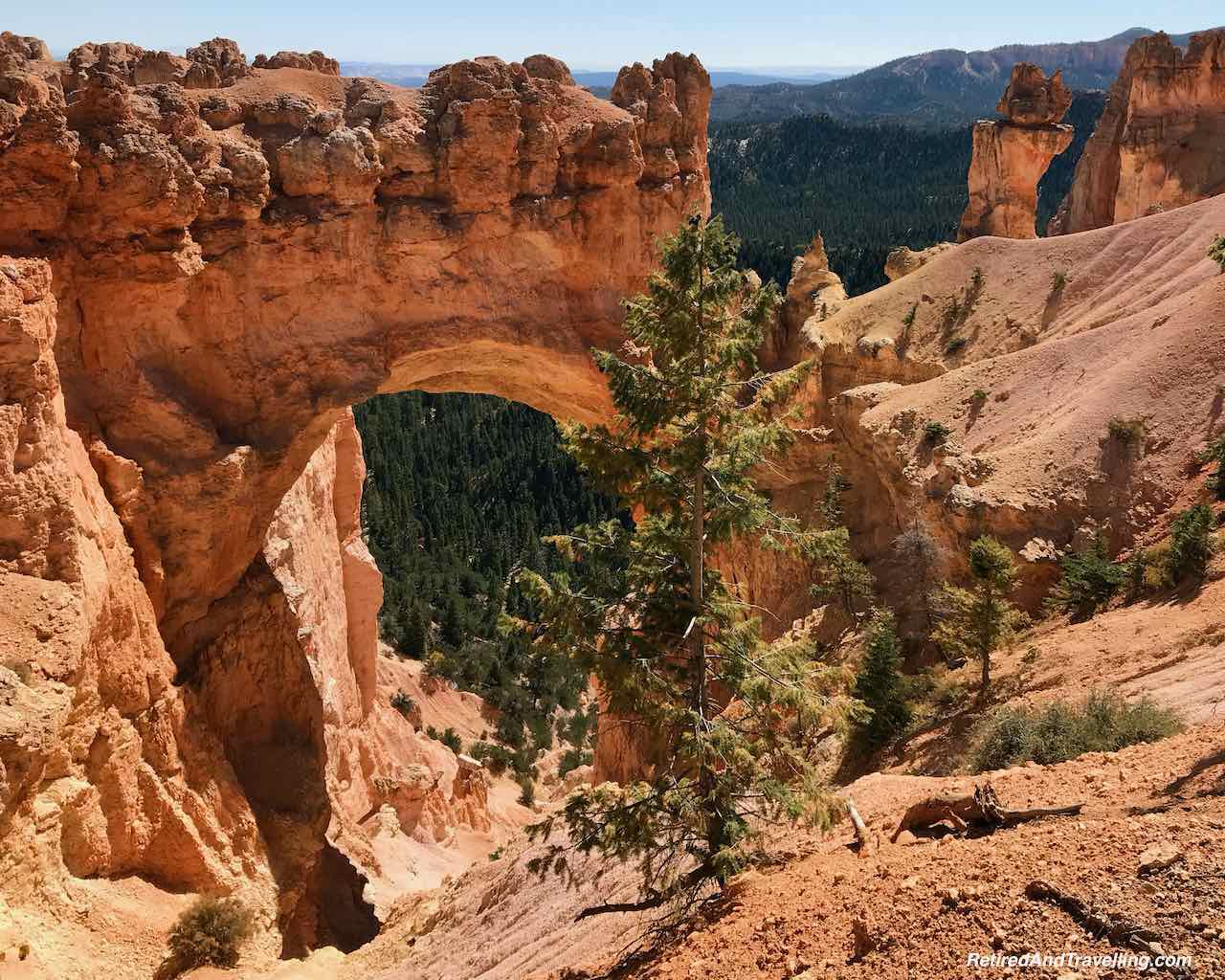 Each of the viewpoints on the scenic drive in Bryce Canyon provided fascinating vistas. We got to see the hoodoos up close. But we saw so much more than just hoodoos at Bryce Canyon National Park.

A Break For Lunch

We packed snacks to get us through a morning break. But by lunch we were ready for a real meal. We headed to the Bryce Lodge.

When we originally planned our visit to Bryce Canyon National Park, we really wanted to stay in the park. But we learned a lesson about leaving the planning too late. There was nothing available when we visited in October even with a month’s notice. But we wanted to check out the Bryce Lodge for a return visit. It would be perfect to stay in the park and walk for sunrise and sunset views.

We passed by the souvenir shops. The large wood building had options for both a quick or a sit-down meal. We opted to take a rest and eat a healthy lunch. I craved a salad with all the trimmings. But David wanted the bison burger. It was easy to get a seat. And the food arrived quickly. 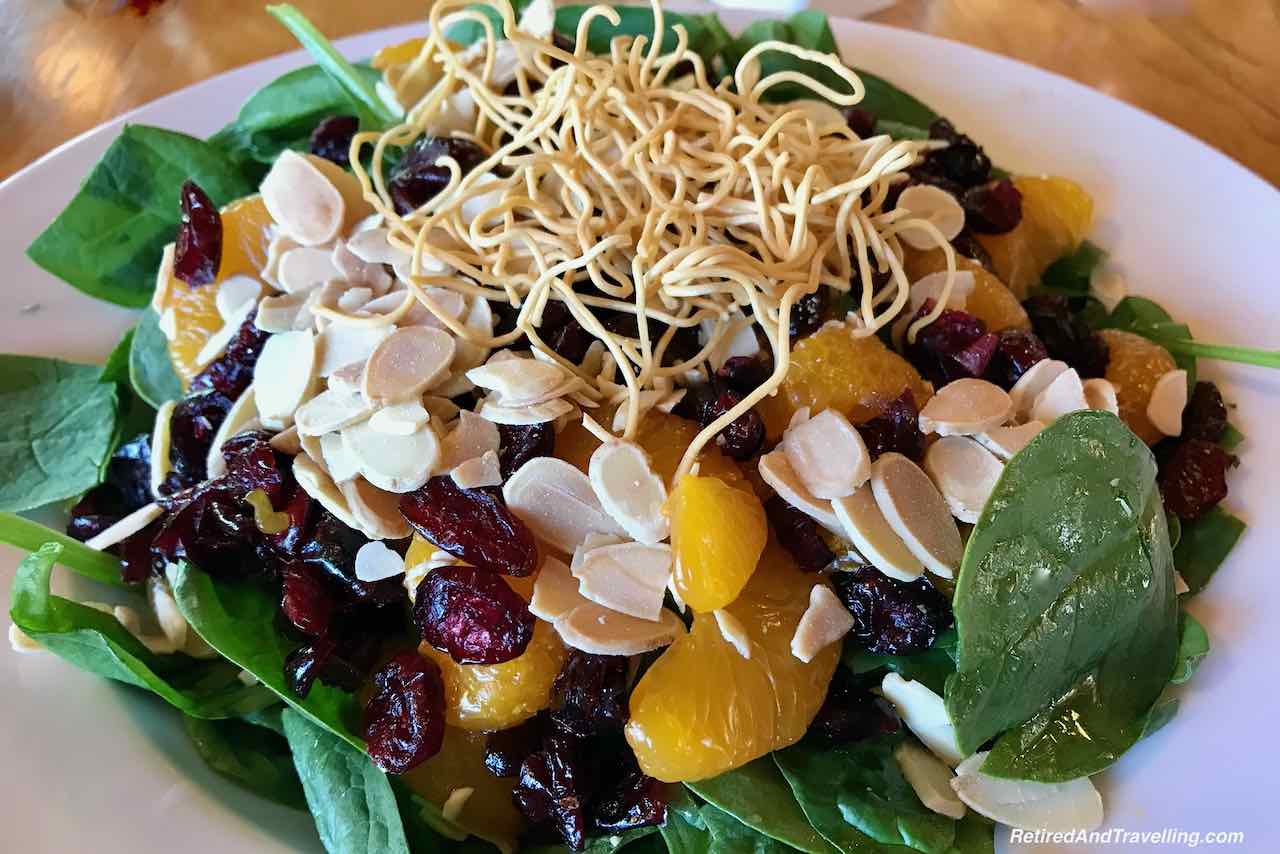 The Bryce Lodge was a shuttle stop so easy to move around the park from this spot. There are several paths that leave from this spot with awesome views.

The Hoodoo Amphitheatre at Inspiration Point Was The Last Stop

We left Inspiration Point as our last stop. We walked to the observation point and simply stared. This amphitheatre of hoodoos was the classic view of Bryce Canyon we came for. 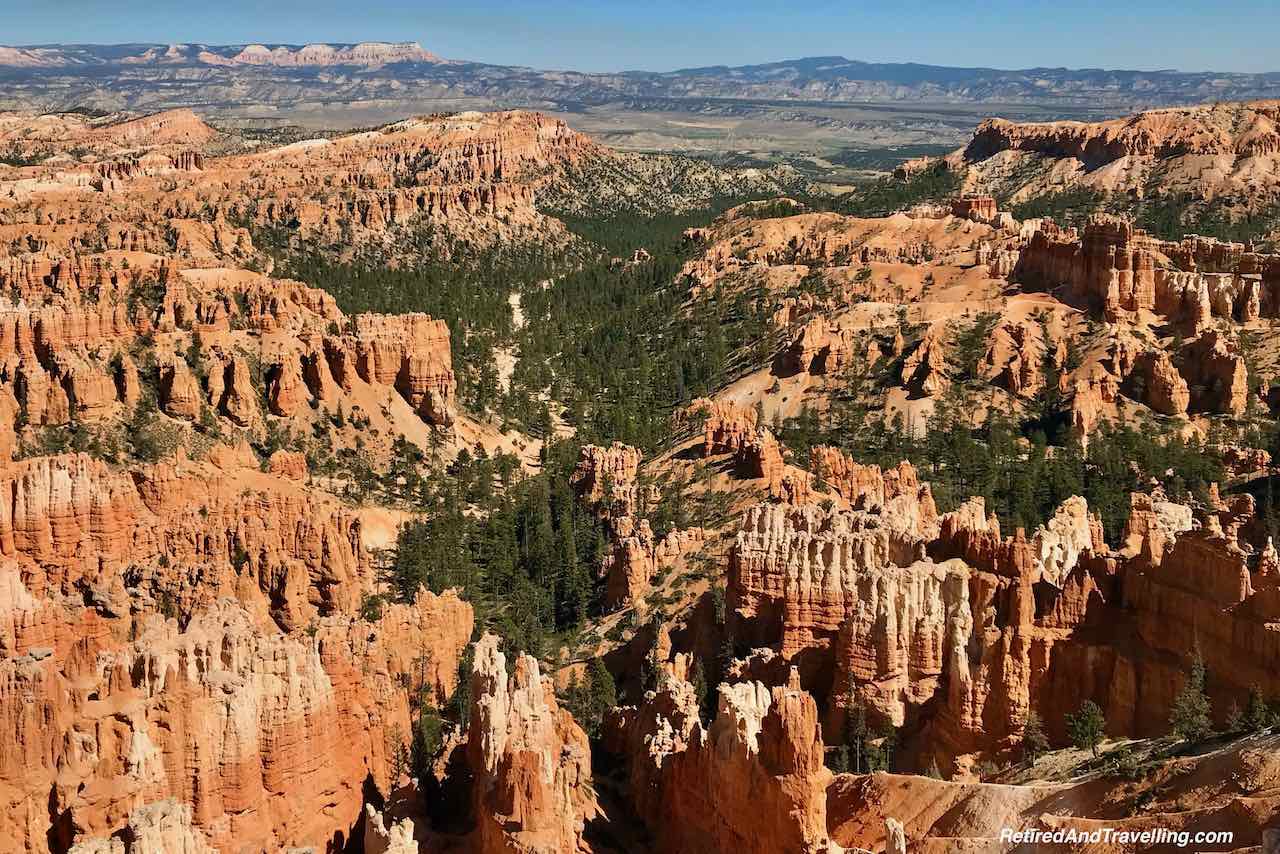 When we looked closely we found interesting rock formations. One feature looked like a castle or parthenon. 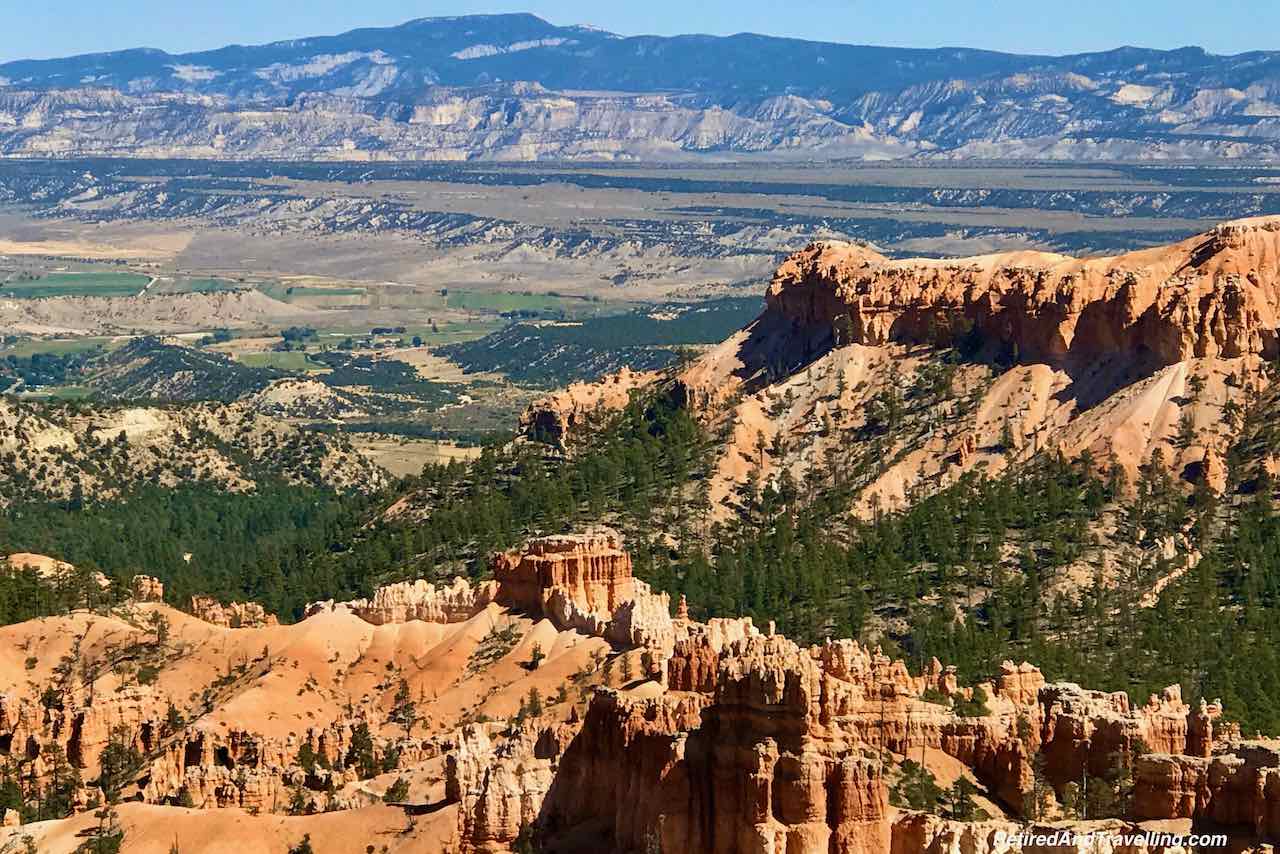 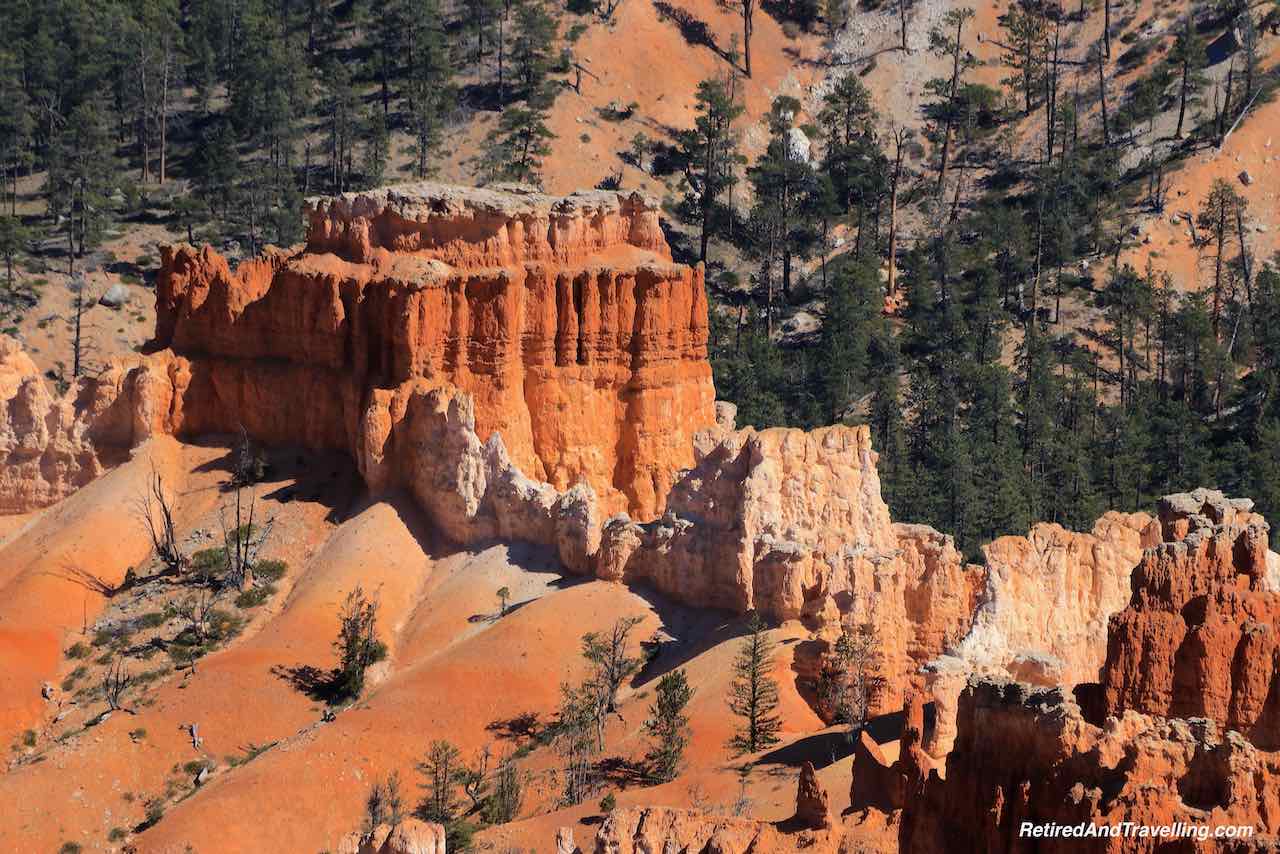 We walked out along the path for a different perspective. Not a walk for someone afraid of heights! A look back showed us the viewpoint high over the centre canyon. But it was the view of the rows and rows of hoodoos that drew our attention. And the variegated colours on the plateau in the distance. 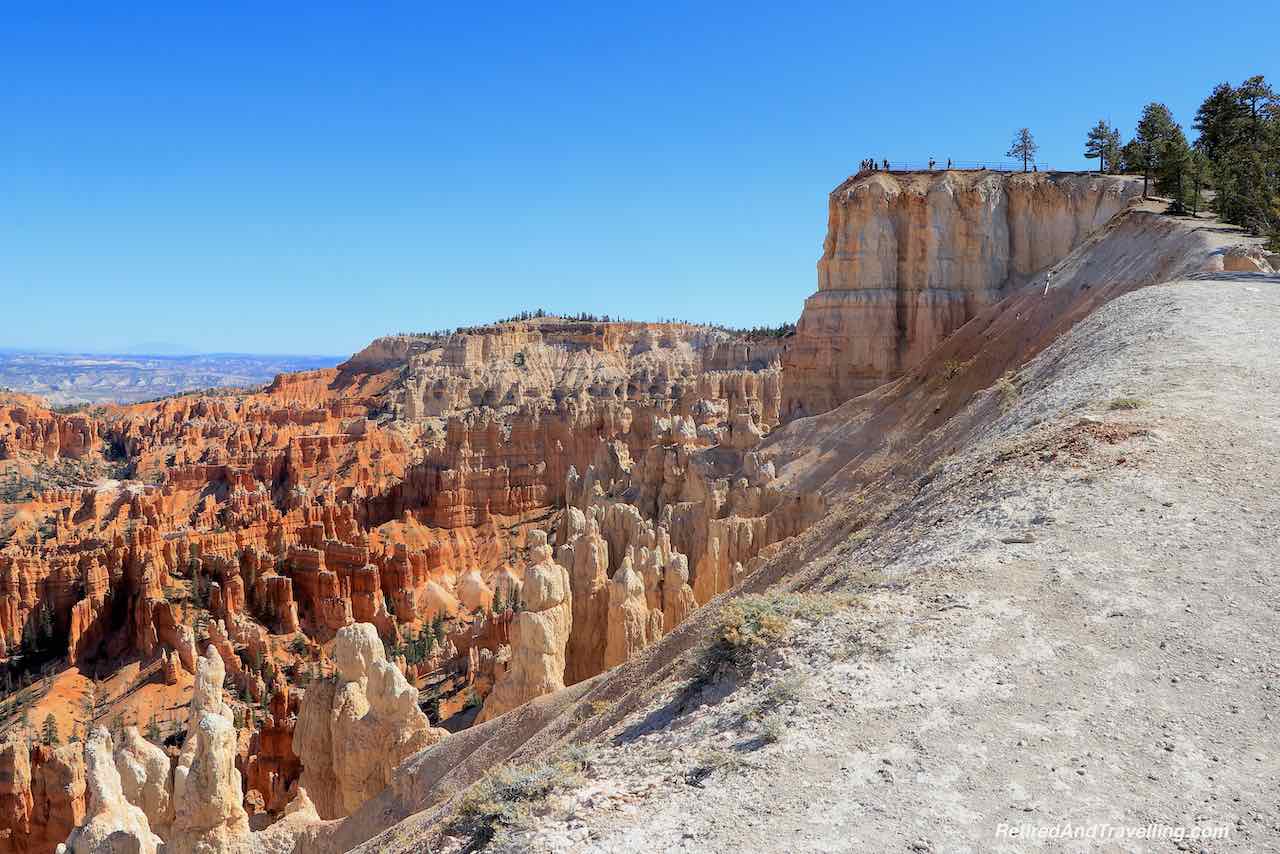 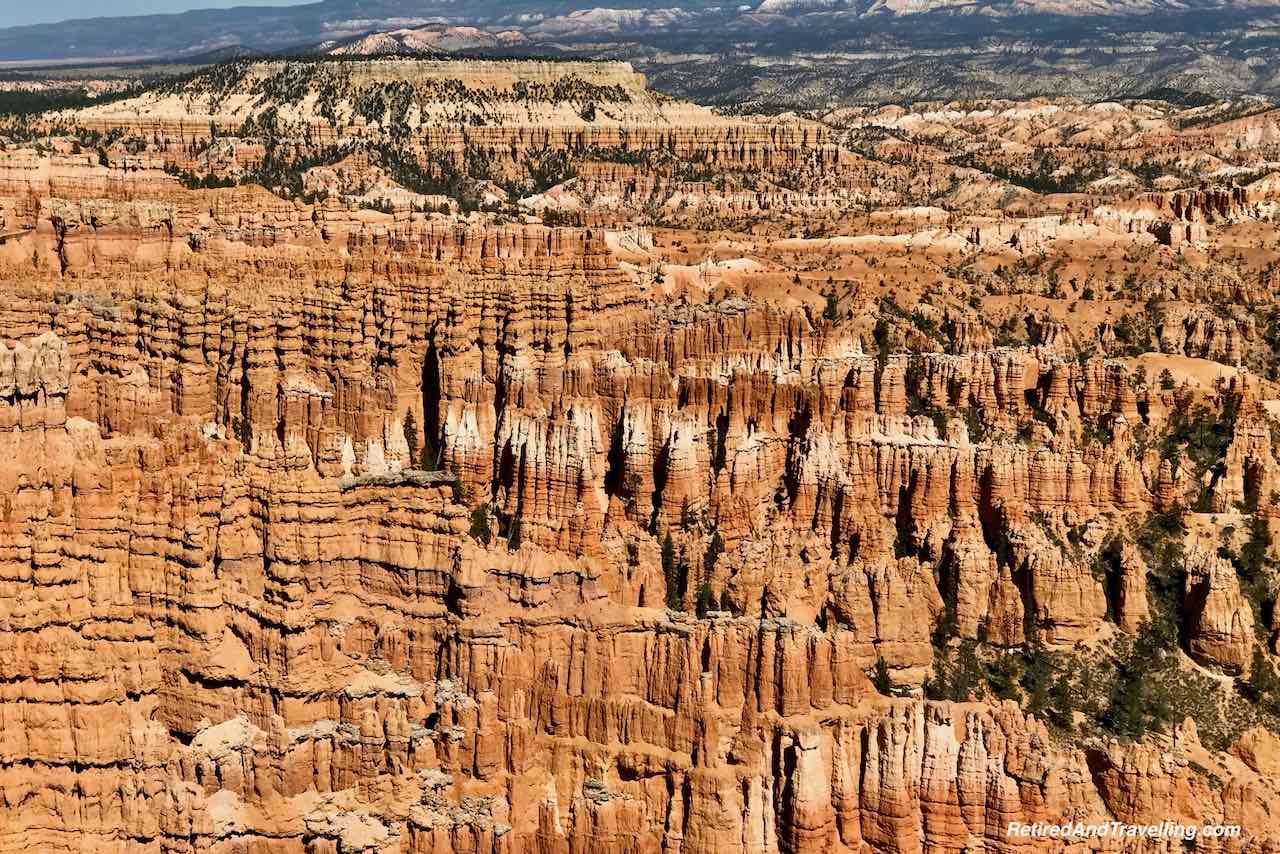 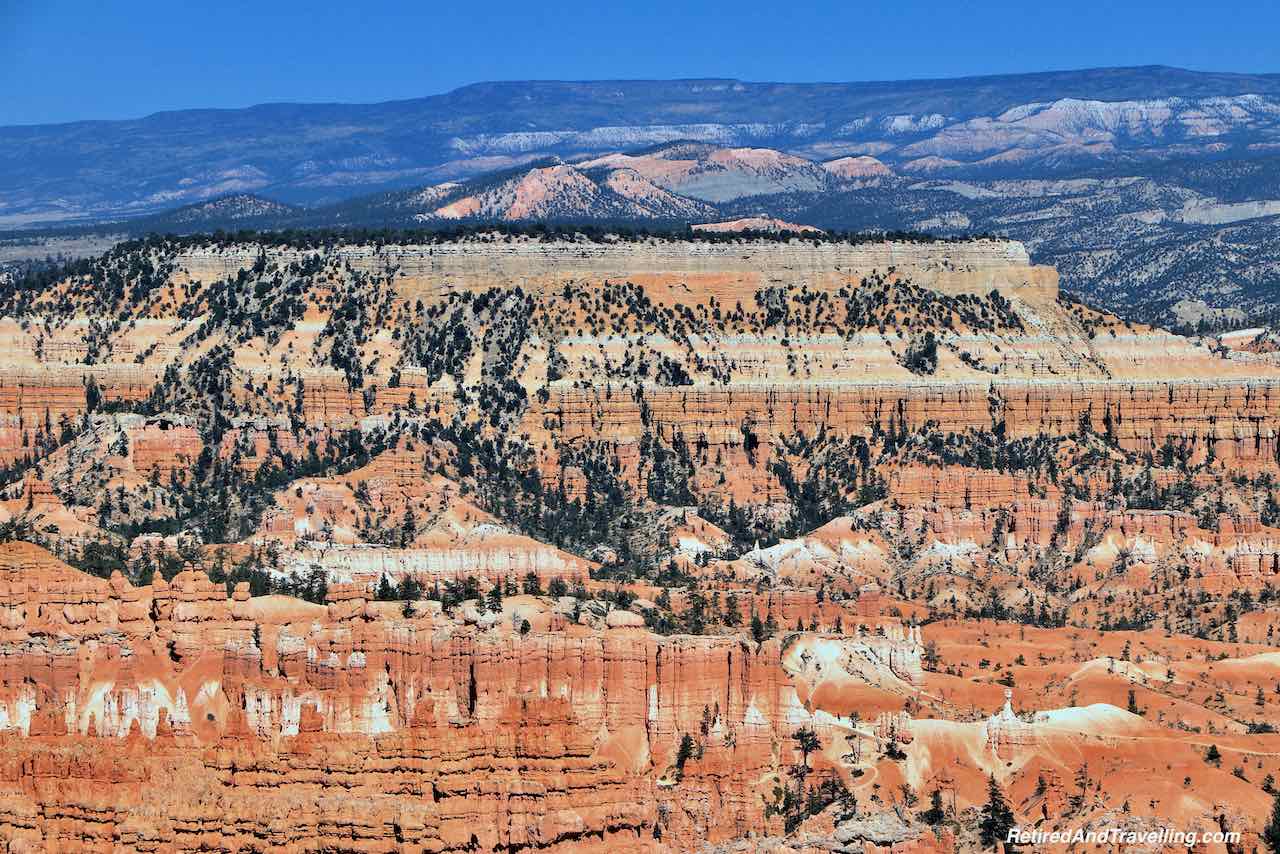 What a sight to leave for our last stop. We got the iconic view of the hoodoos at Bryce Canyon National Park. It was an image we would not forget!

It was a great day on our tour of the Utah National Parks. We got so much more than just hoodoos at Bryce Canyon National Park. Our scenic drive took us to all the great vistas from major viewpoints along the scenic road.

There was a little hiking at the viewpoints to get to the better views. But you don’t really need to be a hiker to see the beauty of Bryce Canyon. But if you want to hike, there were several longer hikes that got you closer to the rock formations.

When we left Bryce Canyon, we got more hoodoo views along highway 89 as we headed south. Our next stop was for 2 days to enjoy some time hiking in Zion National Park. 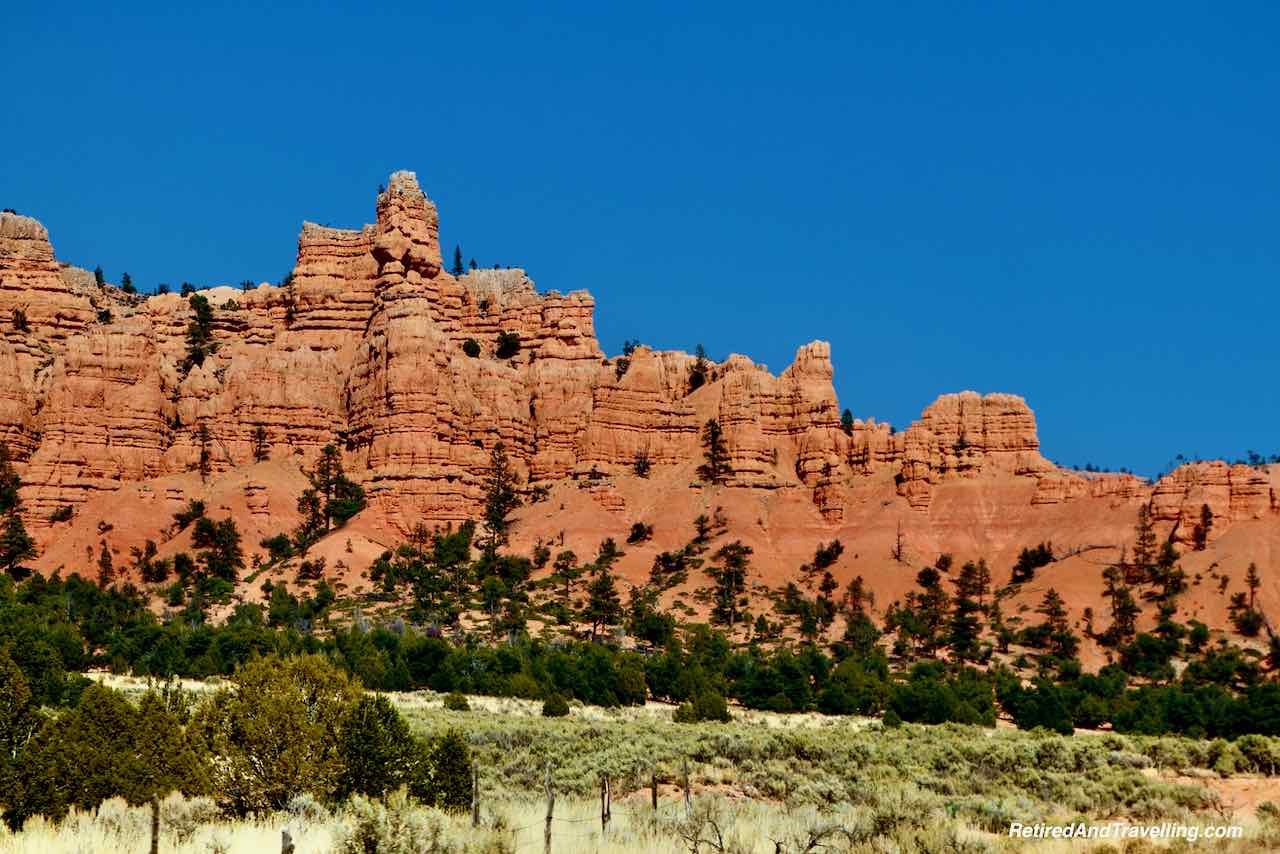 Did you see the hoodoos at Bryce Canyon National Park? Did you have a favourite viewpoint? 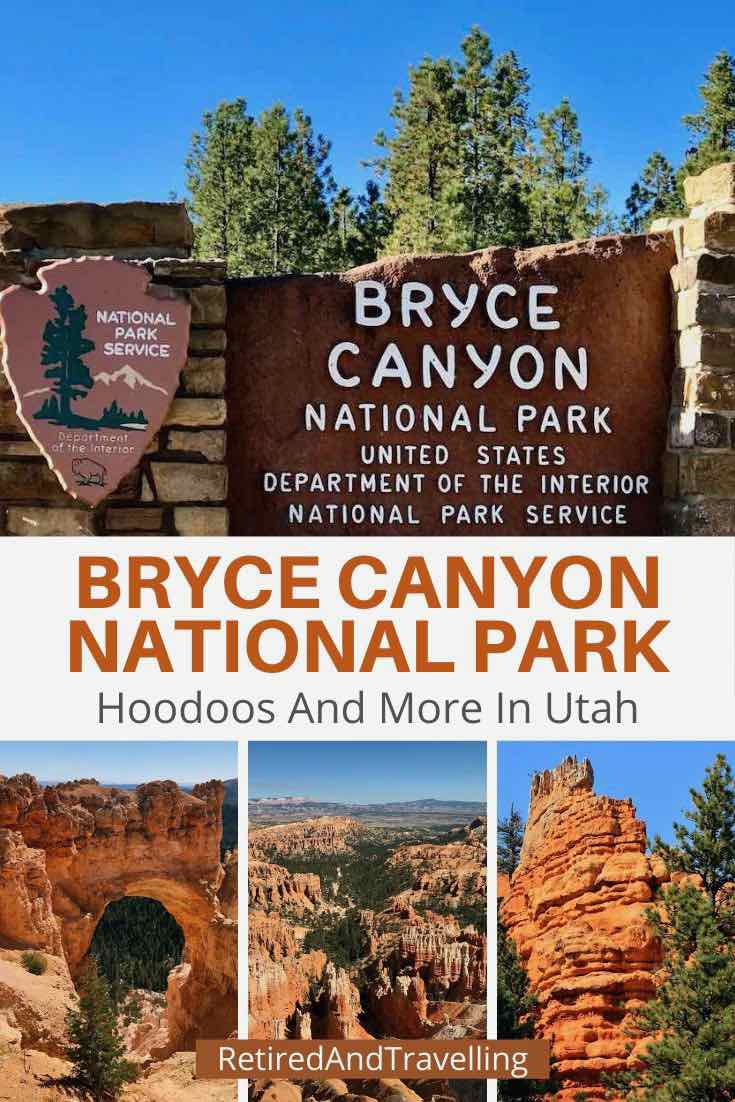 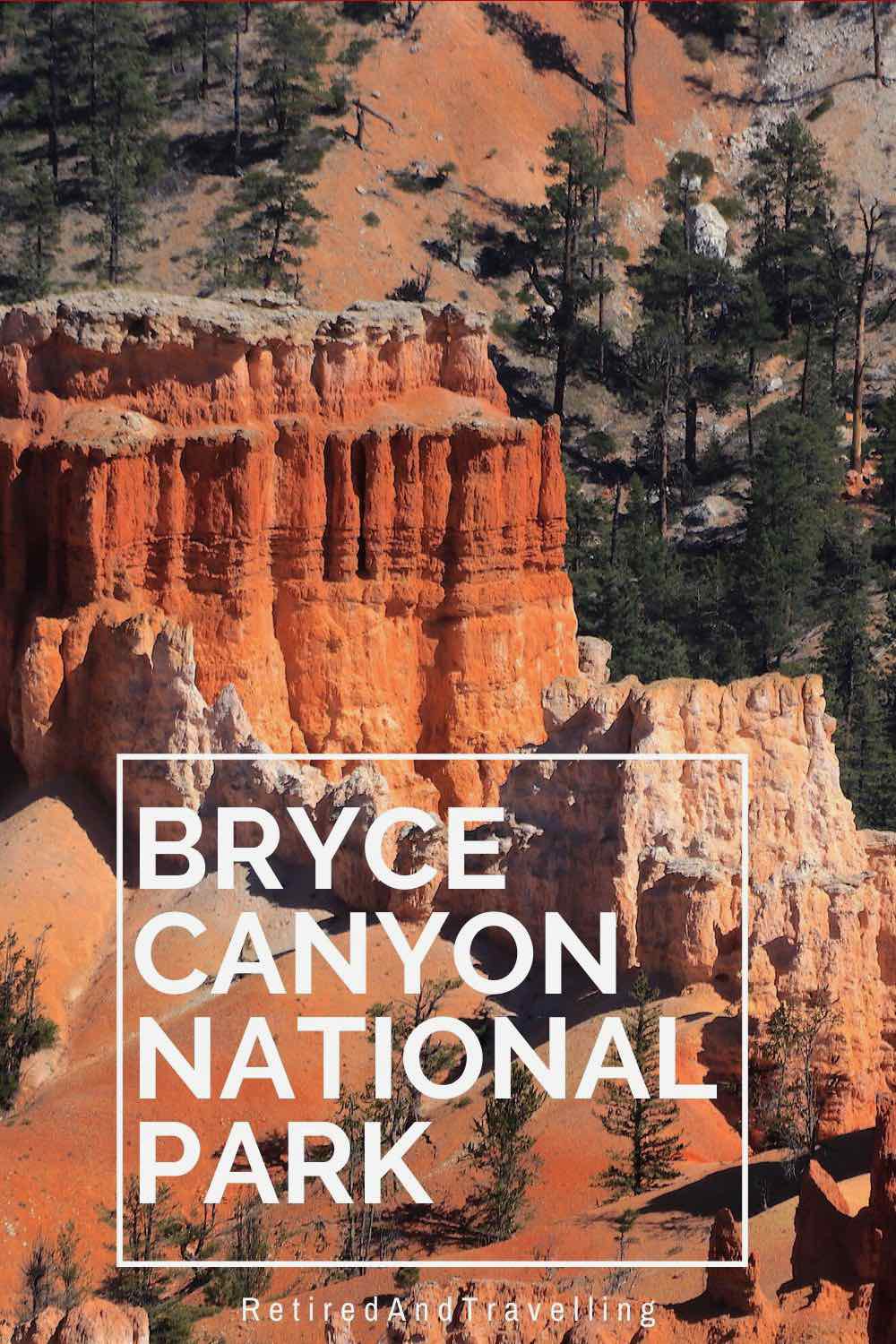 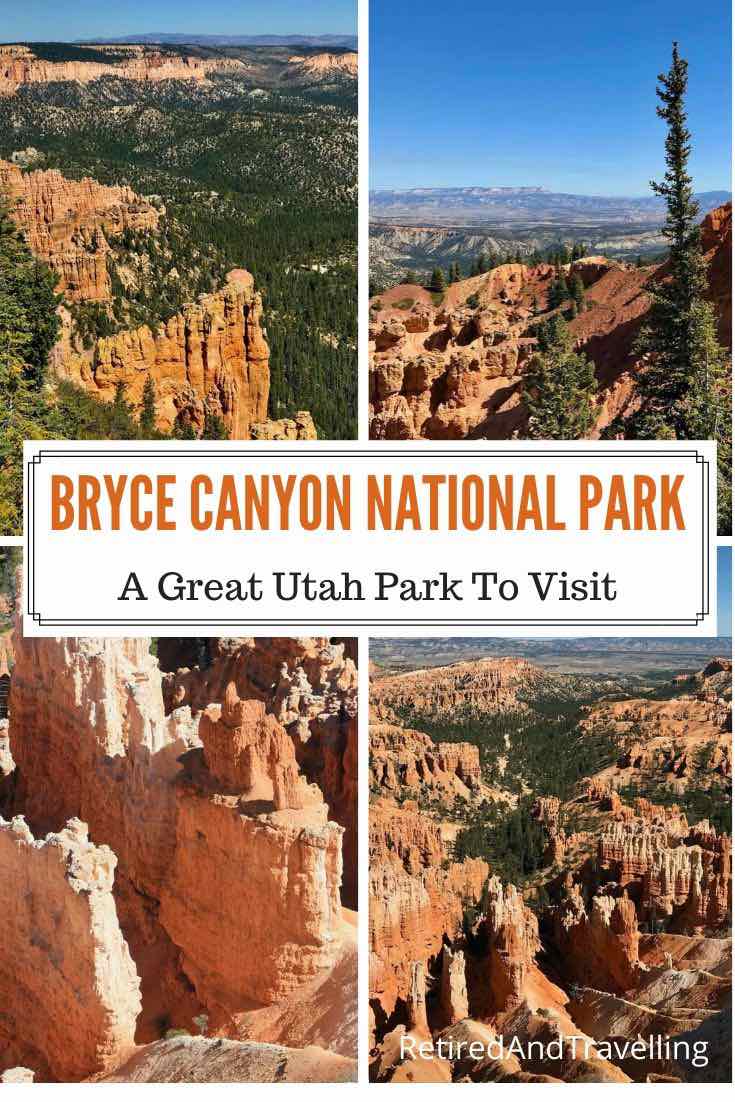