The original plan for transit from Nice to Avignon on this 3 week tour of France was a leisurely drive along the coastline.  But was reconsidered given our experiences with the continuing rain and clogged traffic on coastal roads. We missed the Verdun Gorge route on our trip through the mountains to Nice.

So we decided to detour back north through the mountains for this travel day. After all, after the beach, where else would you want to be on a rainy day than on twisty turny mountain roads?

Starting in Grasse on Way to the Verdun Gorge Route

We made our first stop for café in the old town of Grasse. It was renowned for its perfume factories. But we decided to pass on that tour.  Even it it was the only way we would find lavender on this trip (other than as sachets).

Grasse was an old medieval town.  It sat on the rock side with winding cobbled streets and a castle / fortress in the town. 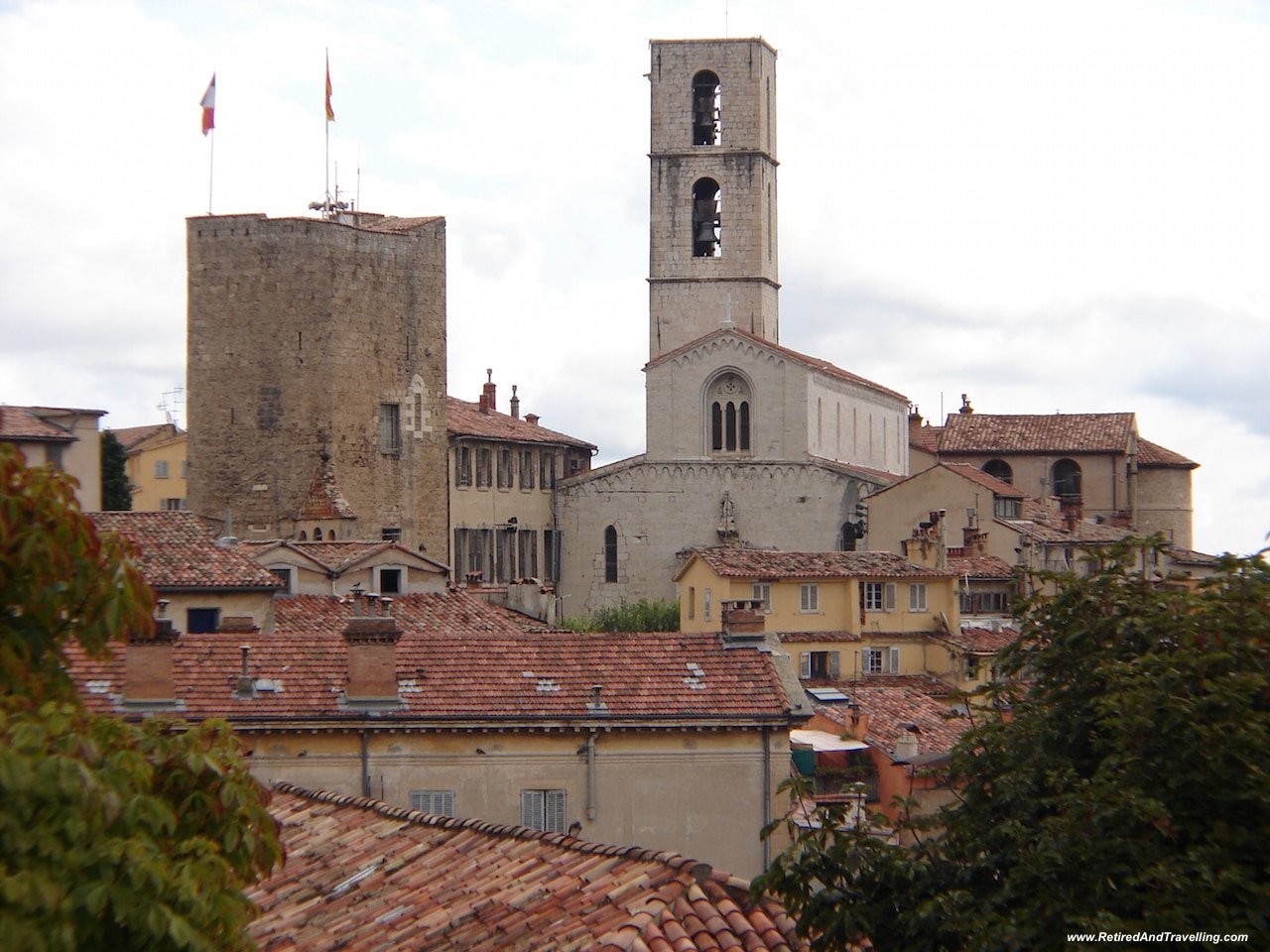 There were several quite interesting pieces of public statuary that caught our eye as we drove through! 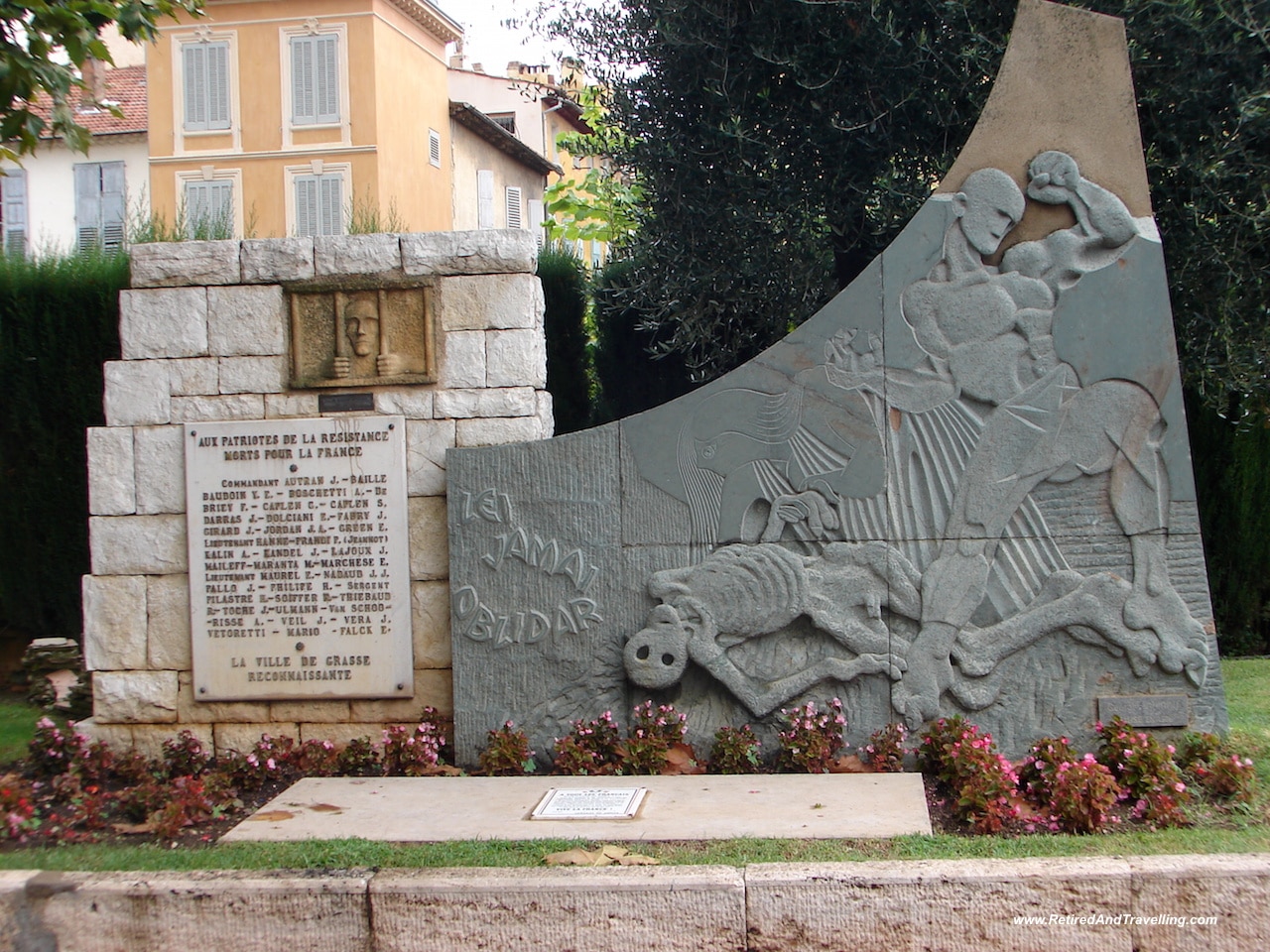 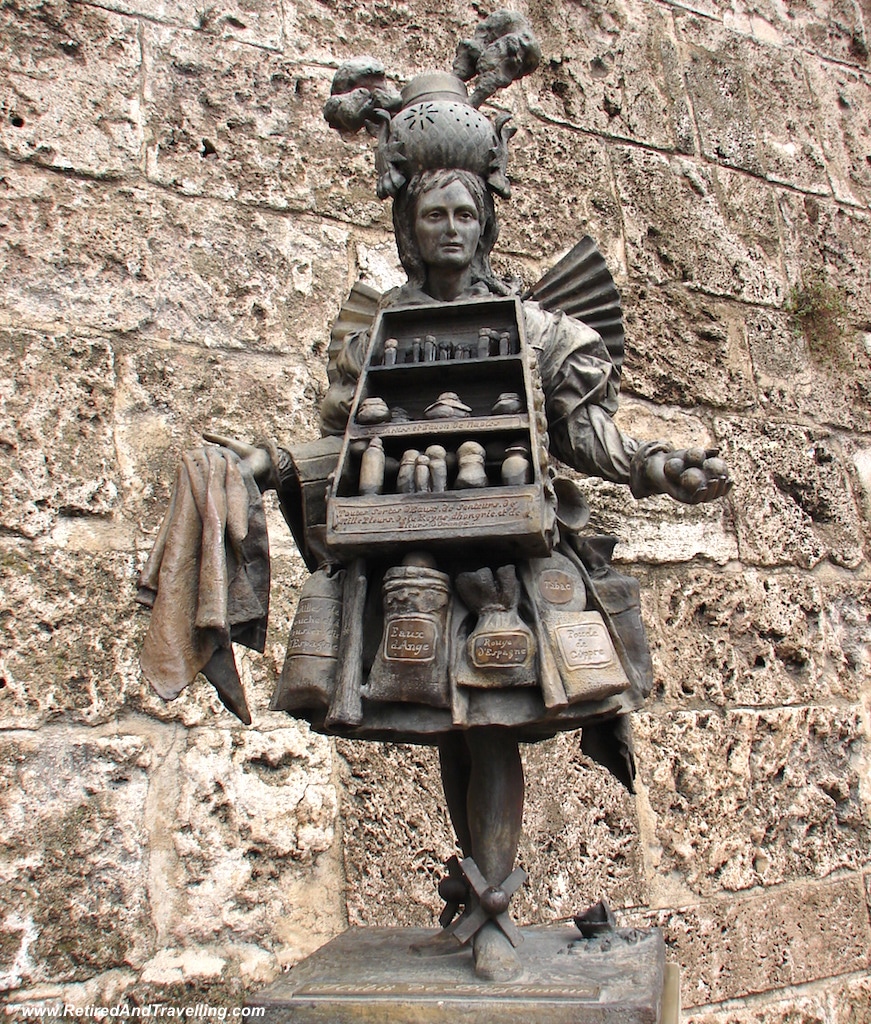 It was a short eat and pic stop.  We knew our mountain trip on Verdun Gorge route in the rain would be even slower than our previous experience as we travelled through the French Alps from Annecy.

Back Into The Mountains Through the Verdun Gorge Route

Our route took us north to Castellane and then we left the main road. We were soon forced to make a decision on whether we wanted to travel on the left or right bank of the Verdun Gorge route.

At that point we didn’t have a good map.  So it was a bit of a coin flip. I initially wanted to be on the side of Pt Sublime to be at the summit.  But we ended up on the other bank and followed mostly the top edge of the Verdun Gorge. 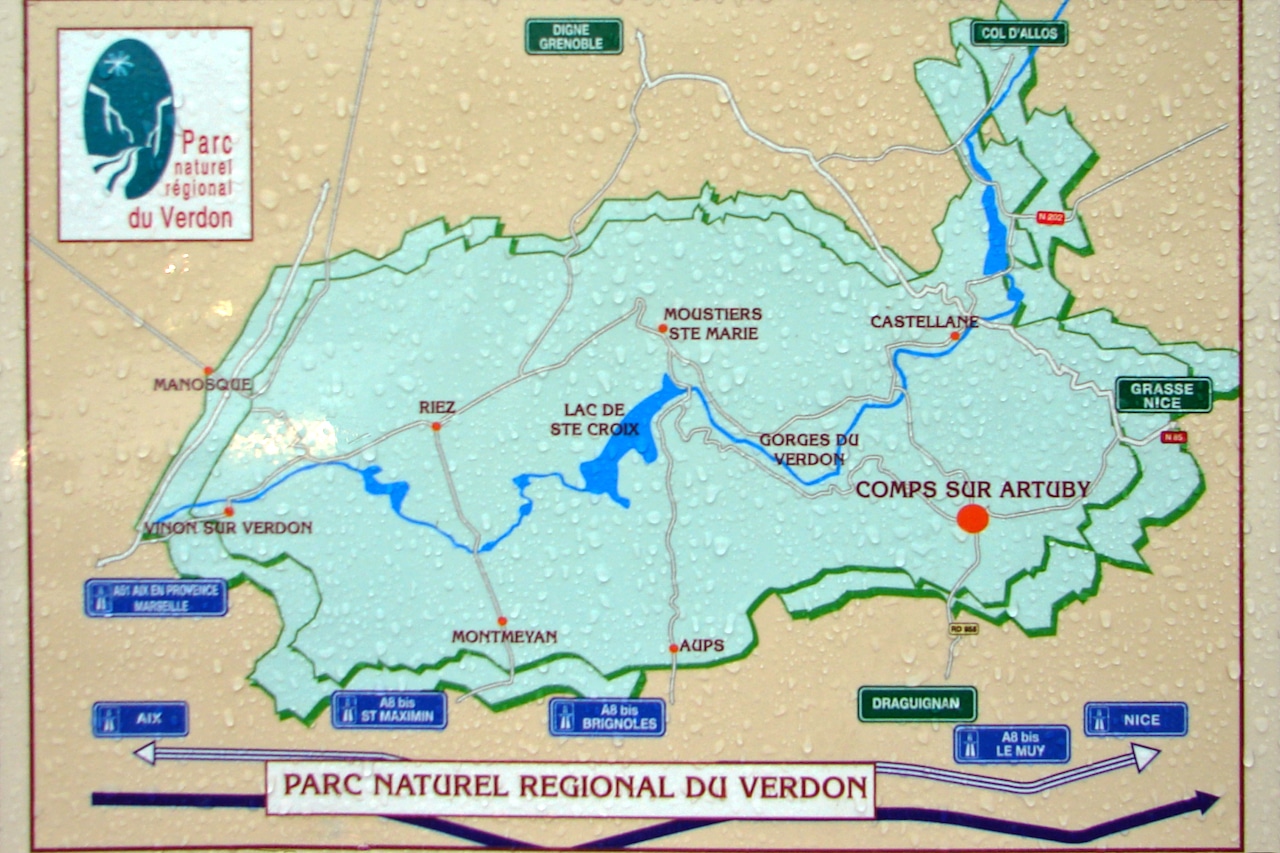 The Verdun Gorge route roads were wet.  They slowed us down.  But we had lots of stops in drizzle to take in the amazing views of the gorge, valleys in cloud, bridges spanning drops. At one point we drove thru low clouds. Occasionally we hit a valley but most of the drive hugged the edge of the gorge. 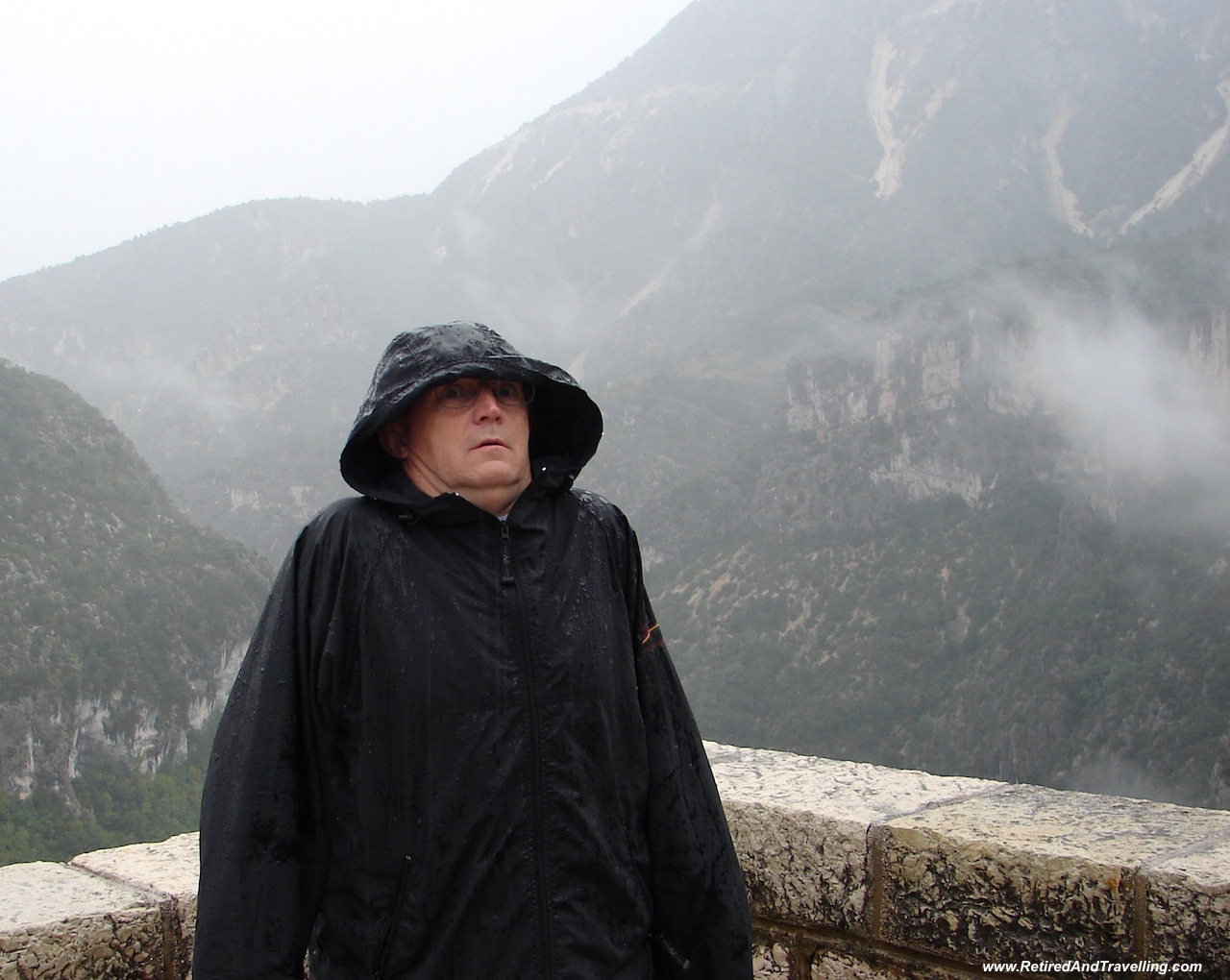 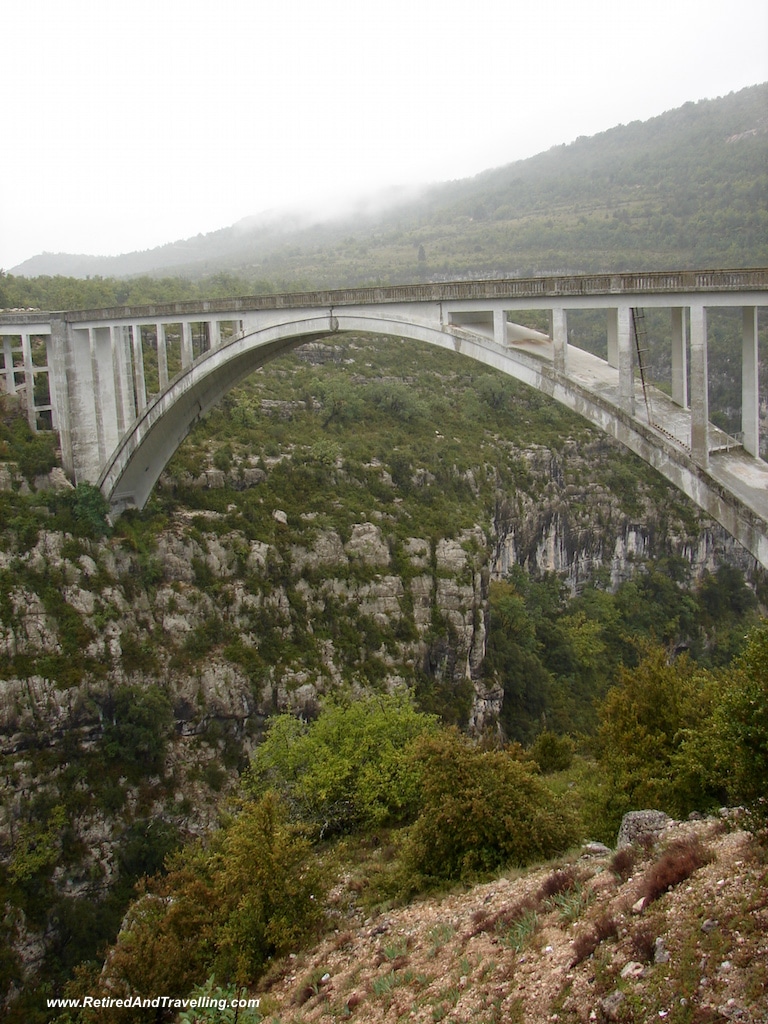 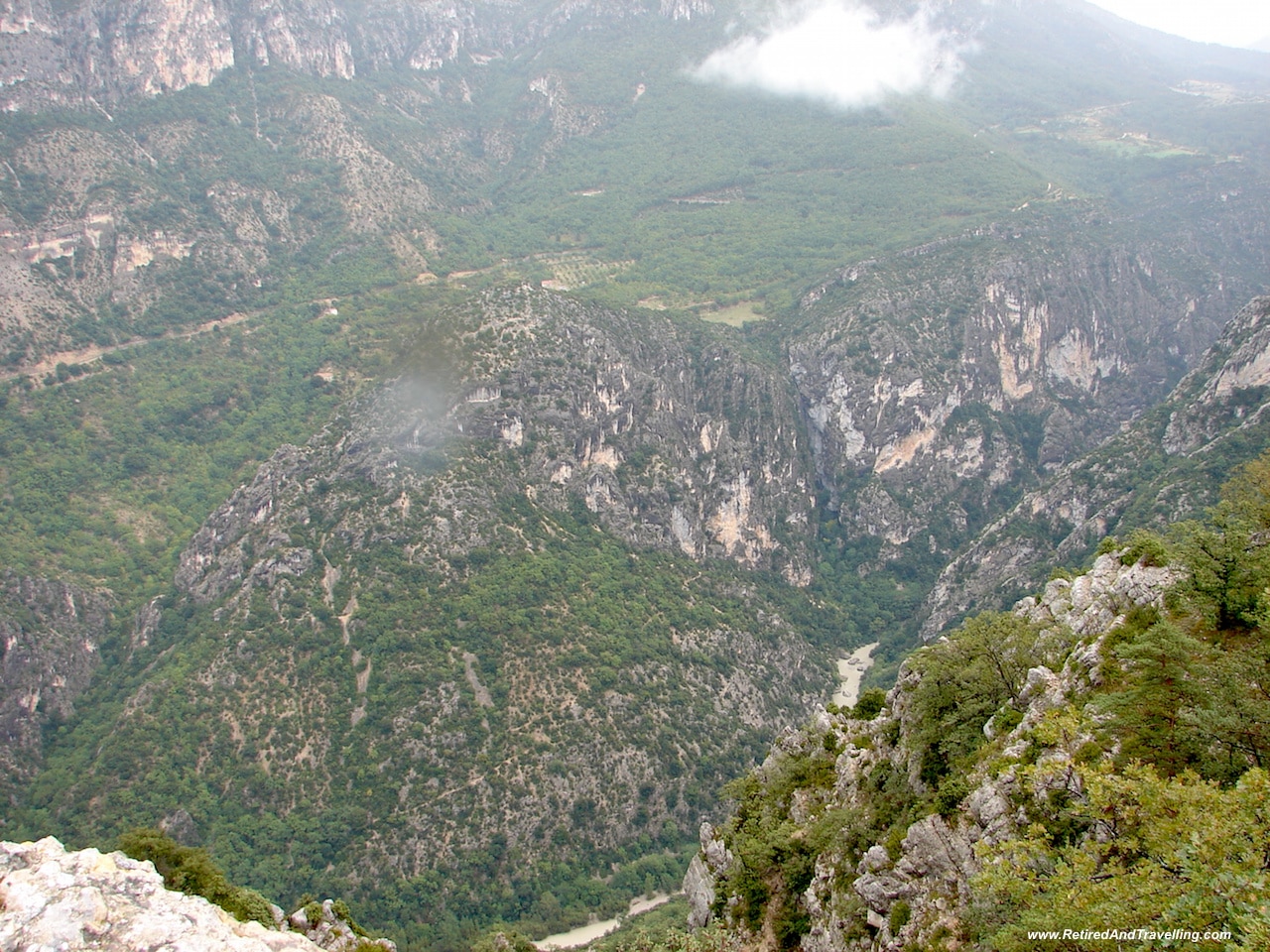 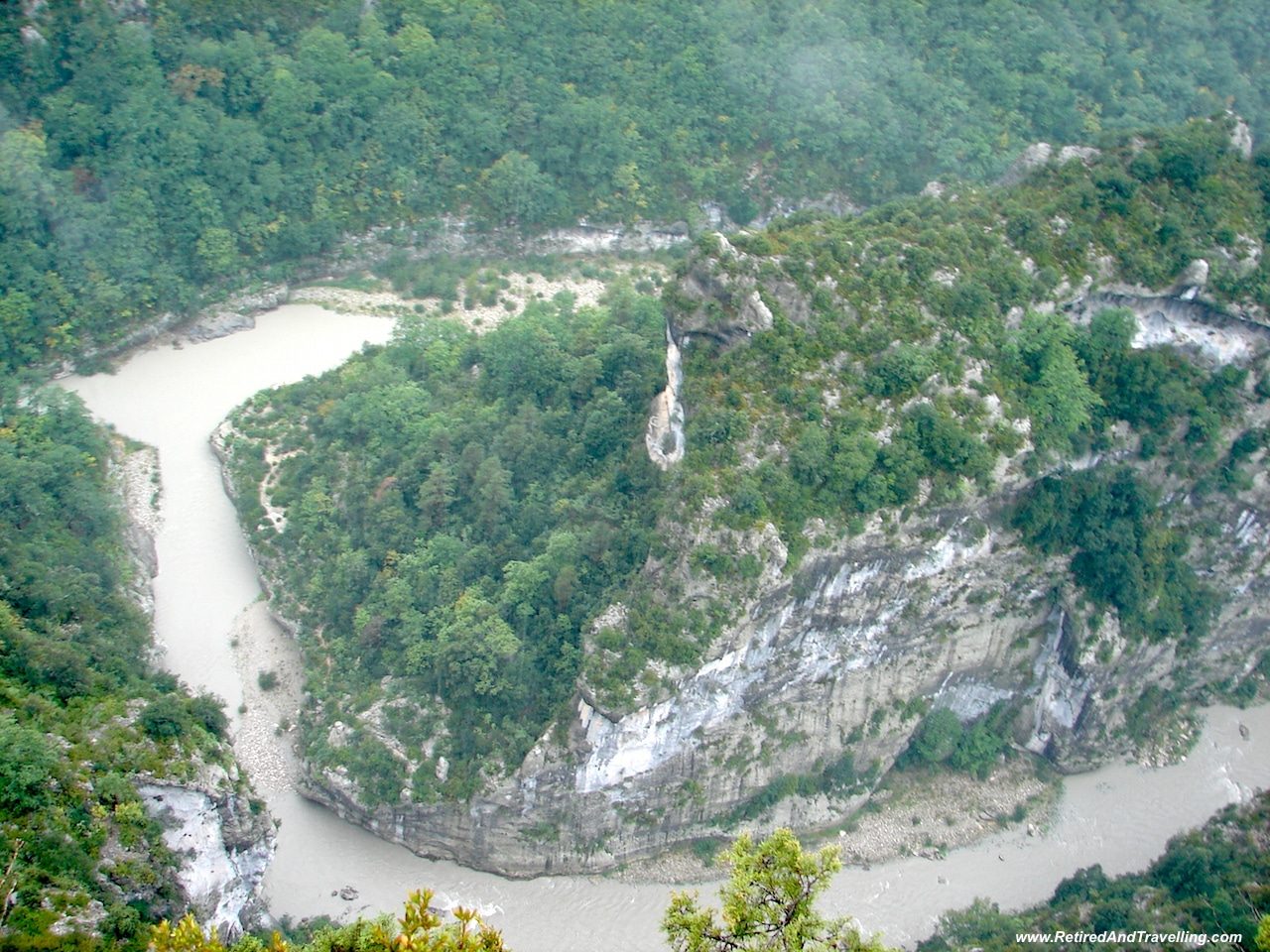 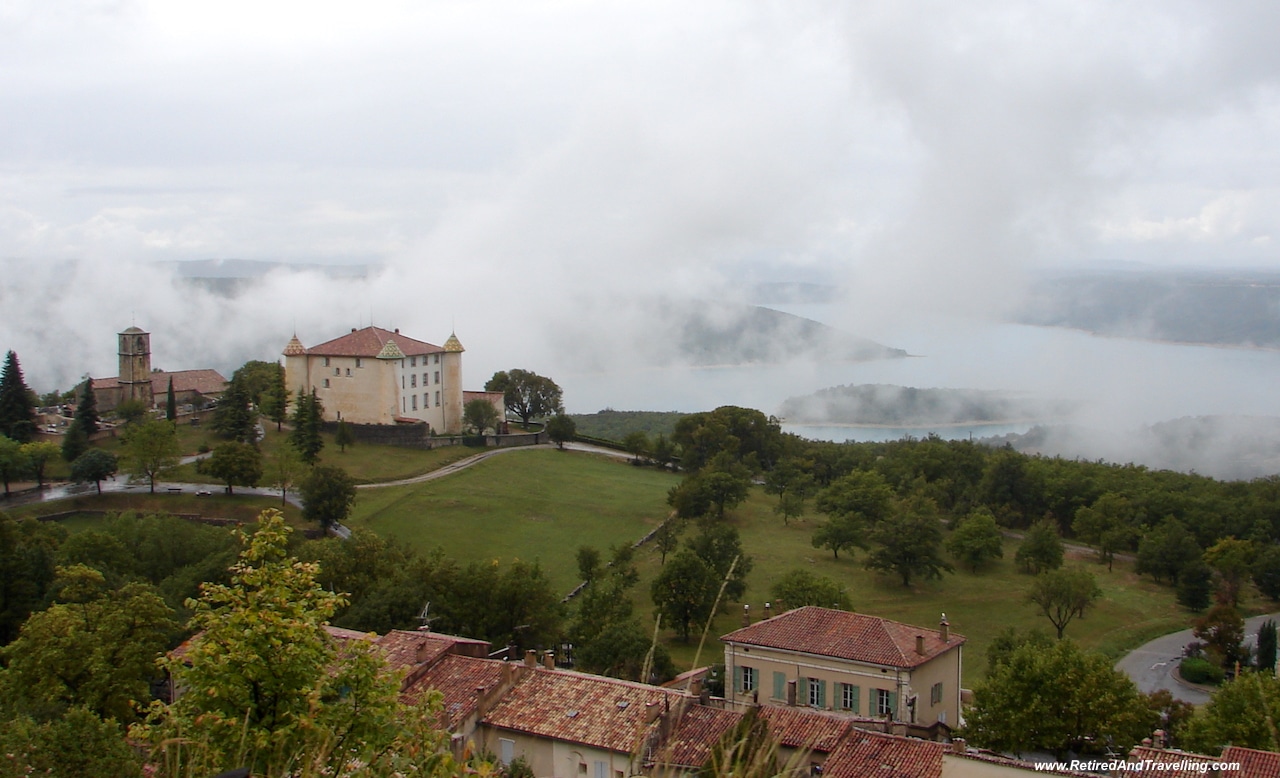 It was clear that the rivers along the Verdun Gorge route were to be taken seriously in flood season. The rivers looked relatively tame as we passed.  But the signs made it clear that this was not always the case. 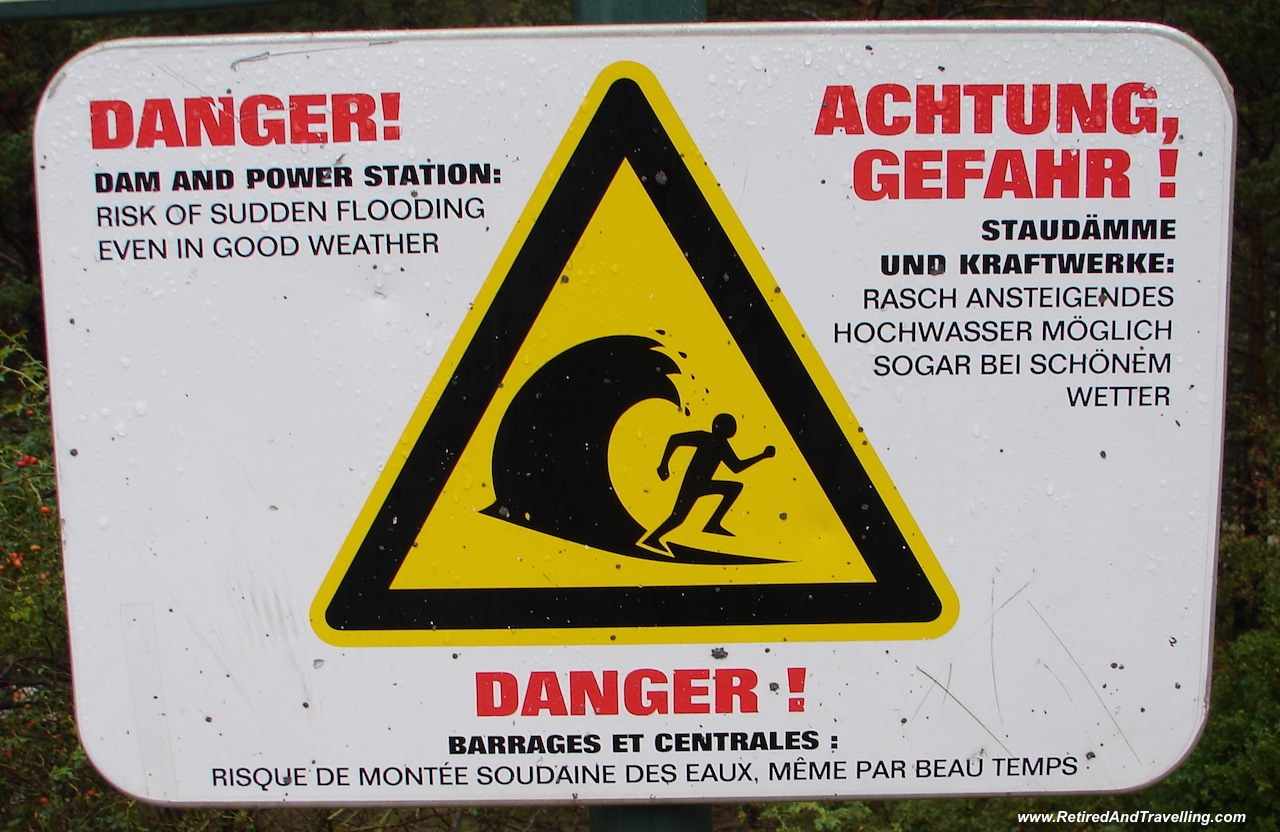 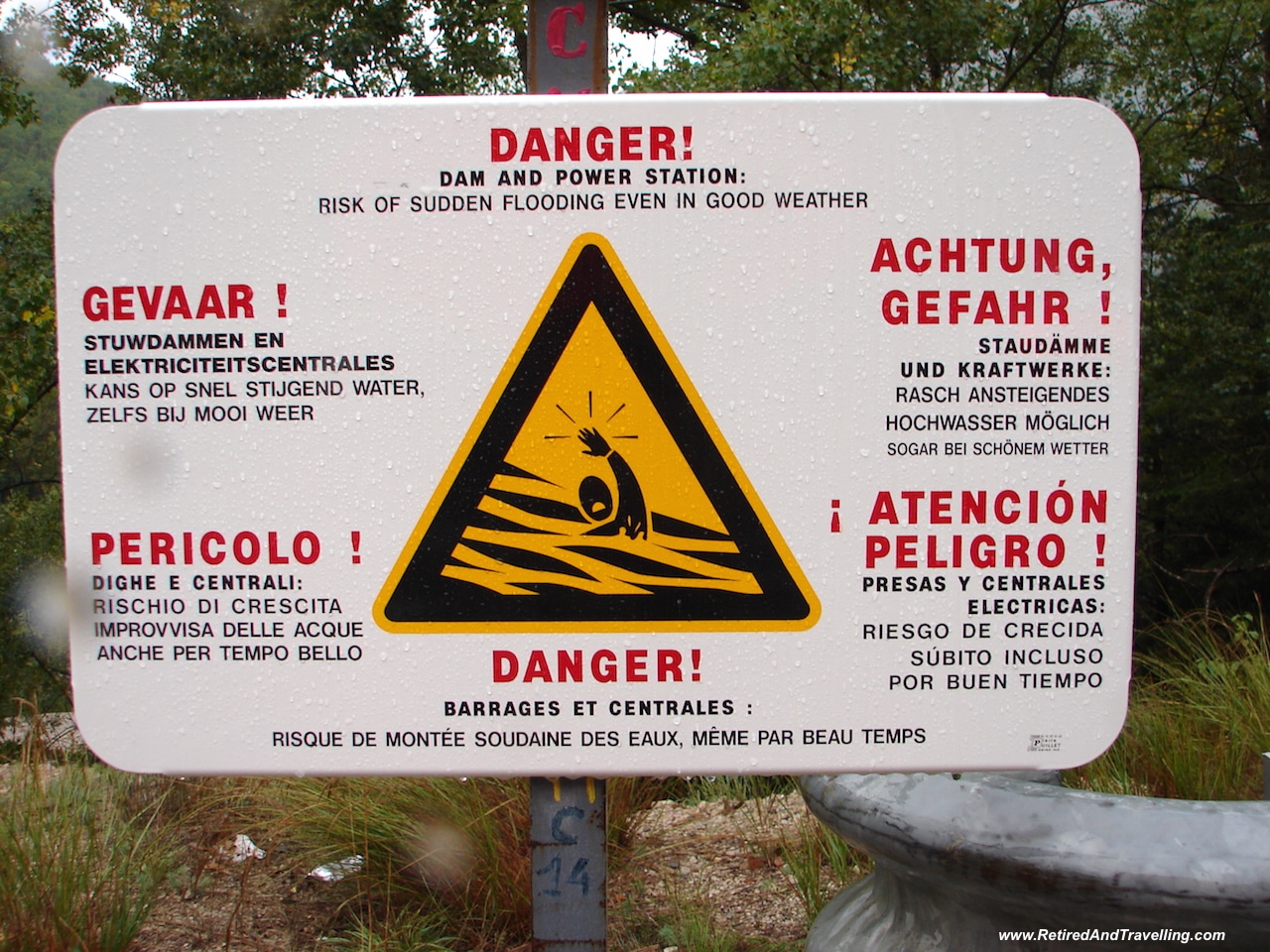 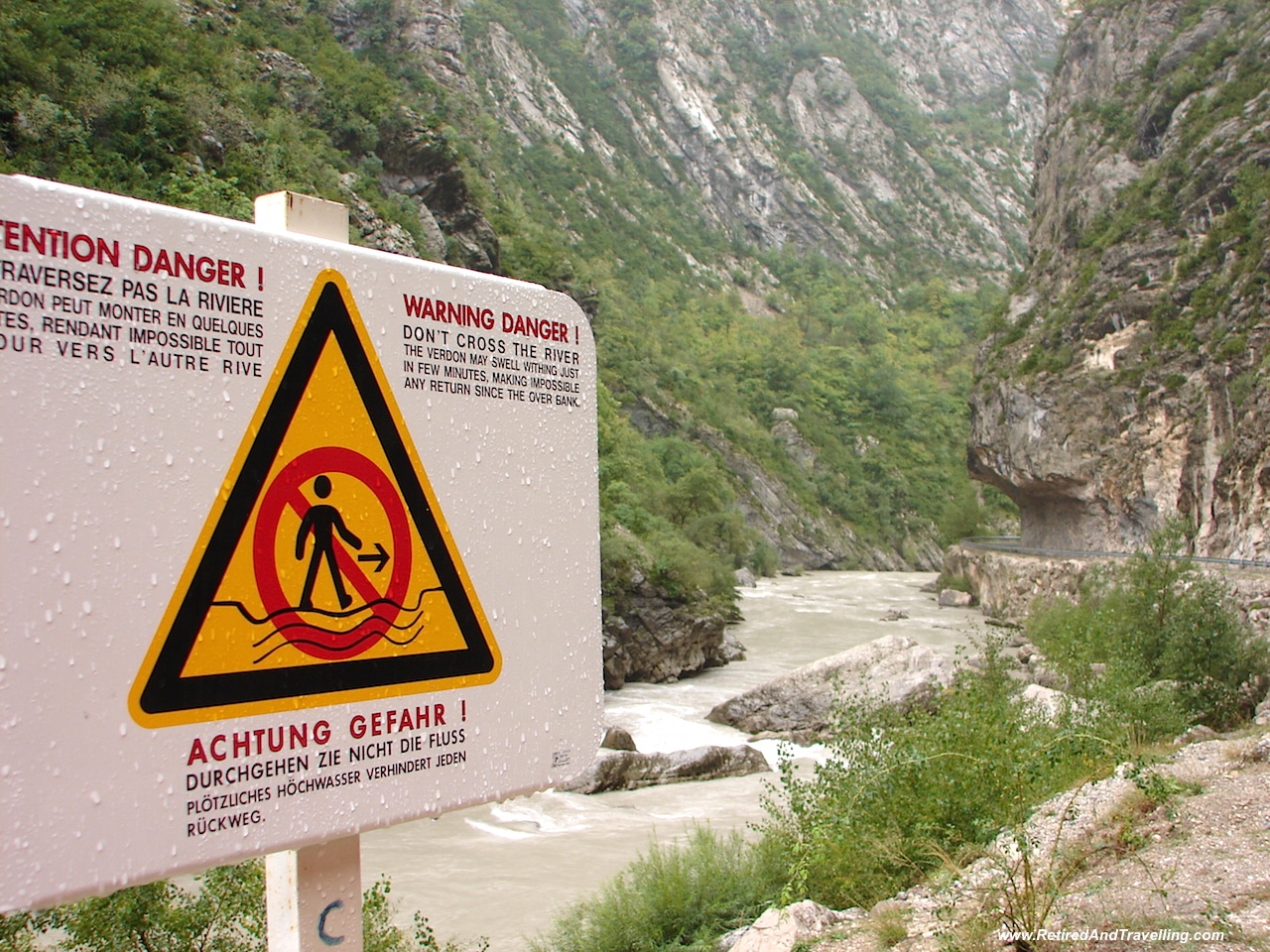 We played tag with a Polish tour bus. Each of us stopped at different points along the Verdun Gorge route. At one point we caught it, trailed by a long train of bright red Ferrari’s that must have been out on some mountain excursion. We heard the growling engines as they held the cars in check behind the slow bus in a “no pass” zone. 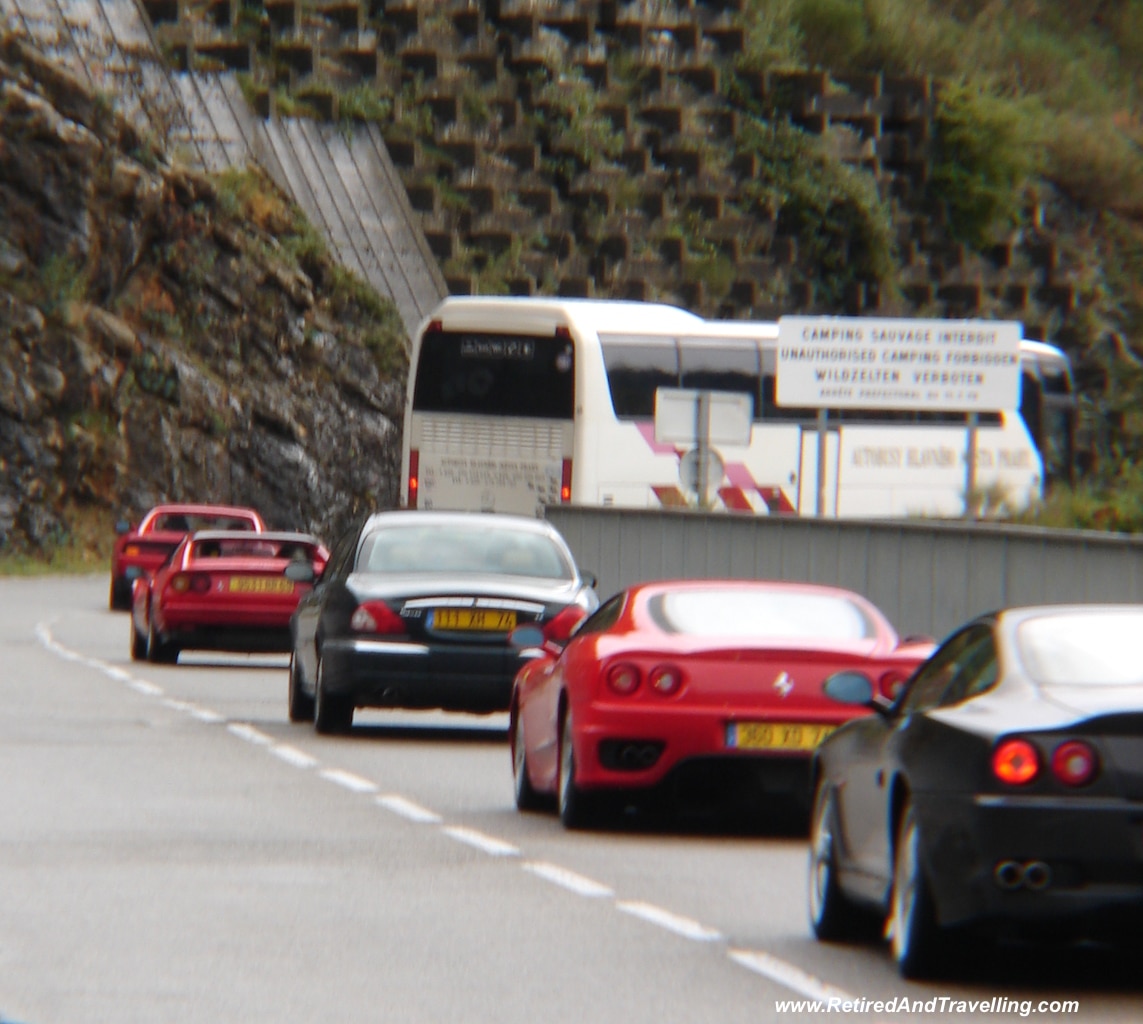 As we came to the end of the Verdun Gorge route we came upon a bright turquoise lake (Lac de Ste Croix).  We took pics from the bridge with the gorge on one side and lake and valley on the other. Lunch was a stop at a local brasserie in Aiguines. 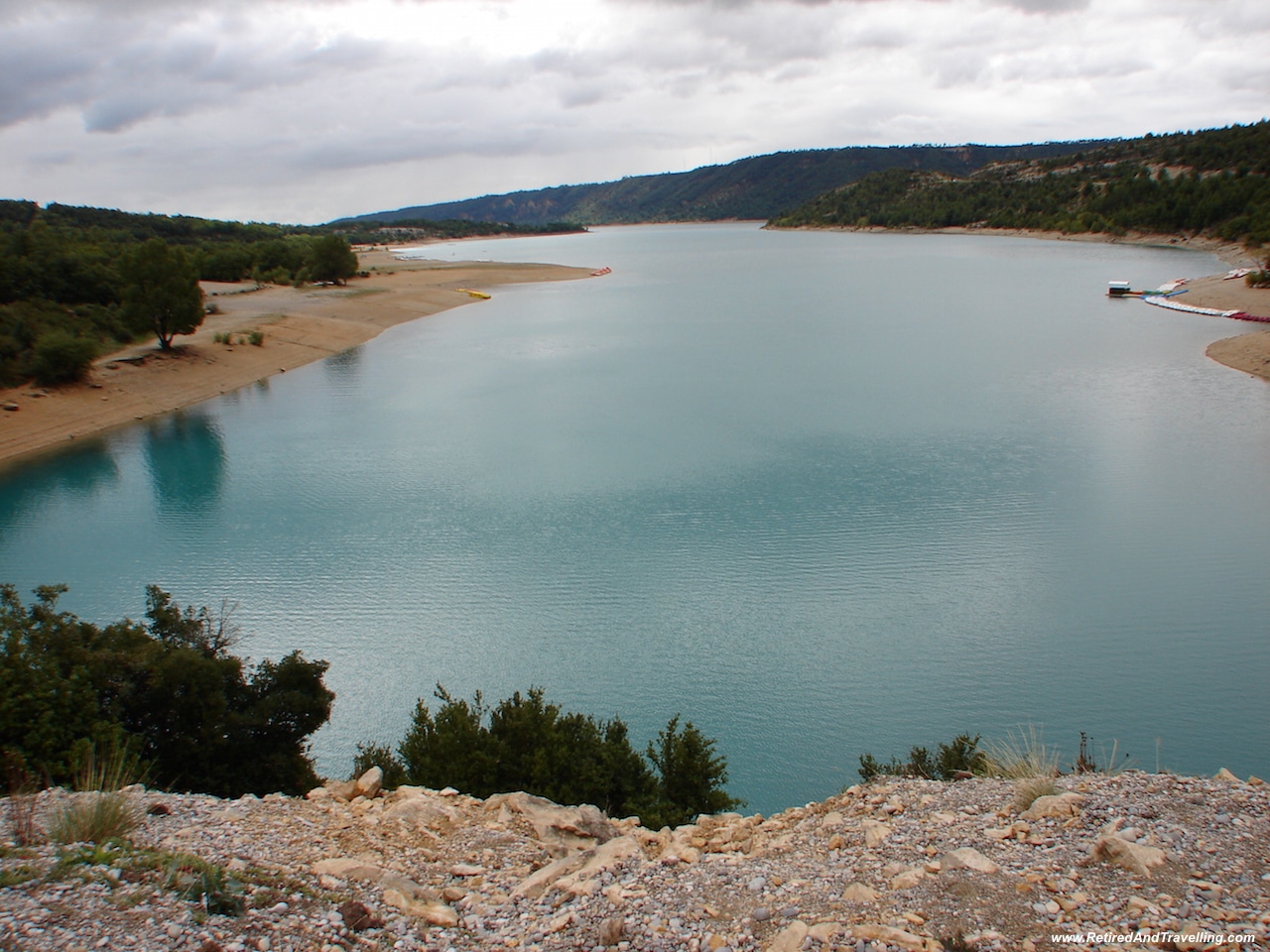 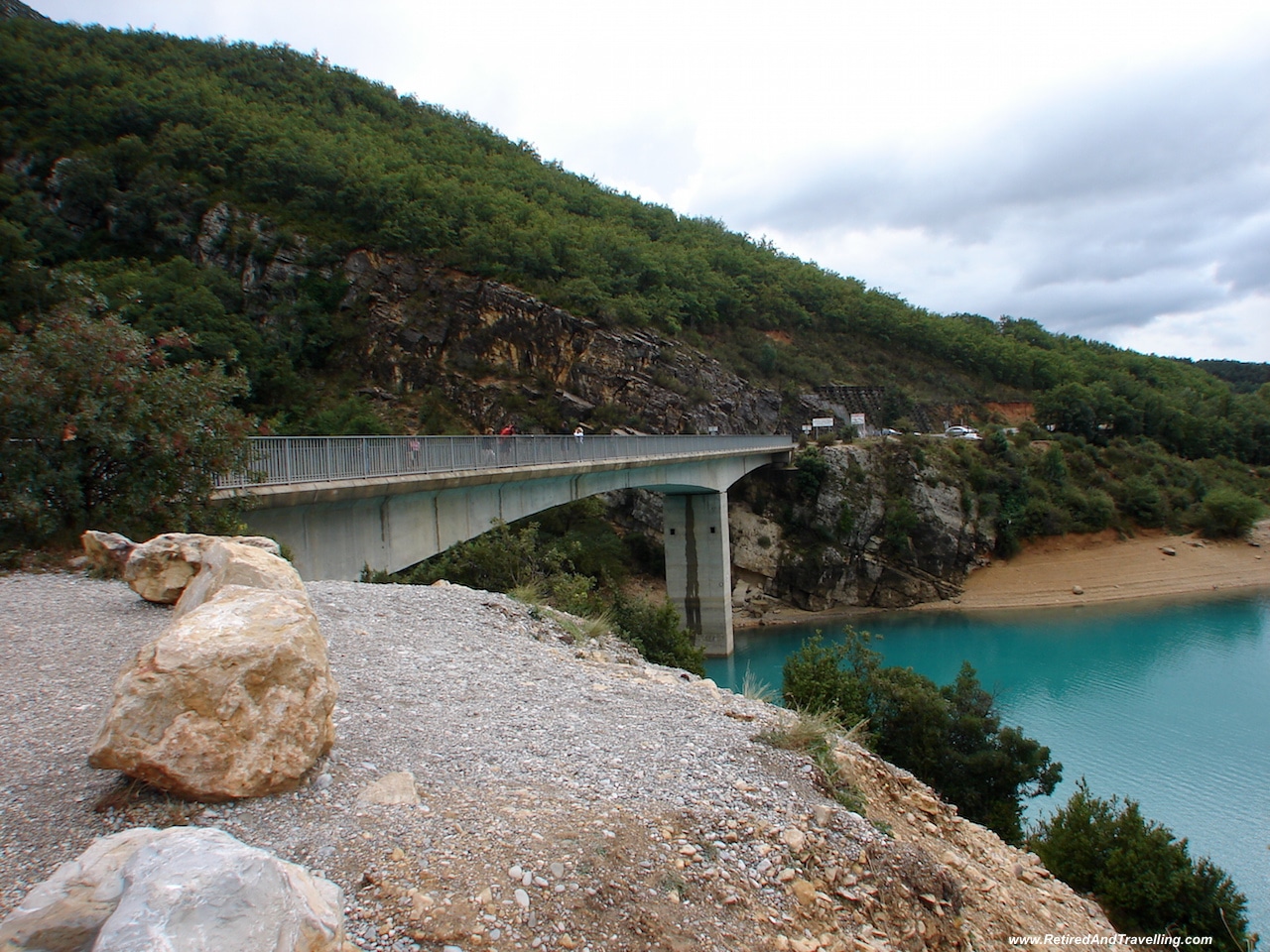 The Route to Avignon

It took us 5 hours along the Verdun Gorge route from Castellane through the gorge.  When we looked at the map, Avignon looked further away than when we had started. We plotted a couple of local routes.  But finally decided to take the faster (if not more direct) Autoroute thru Aix En Provence and into Avignon. 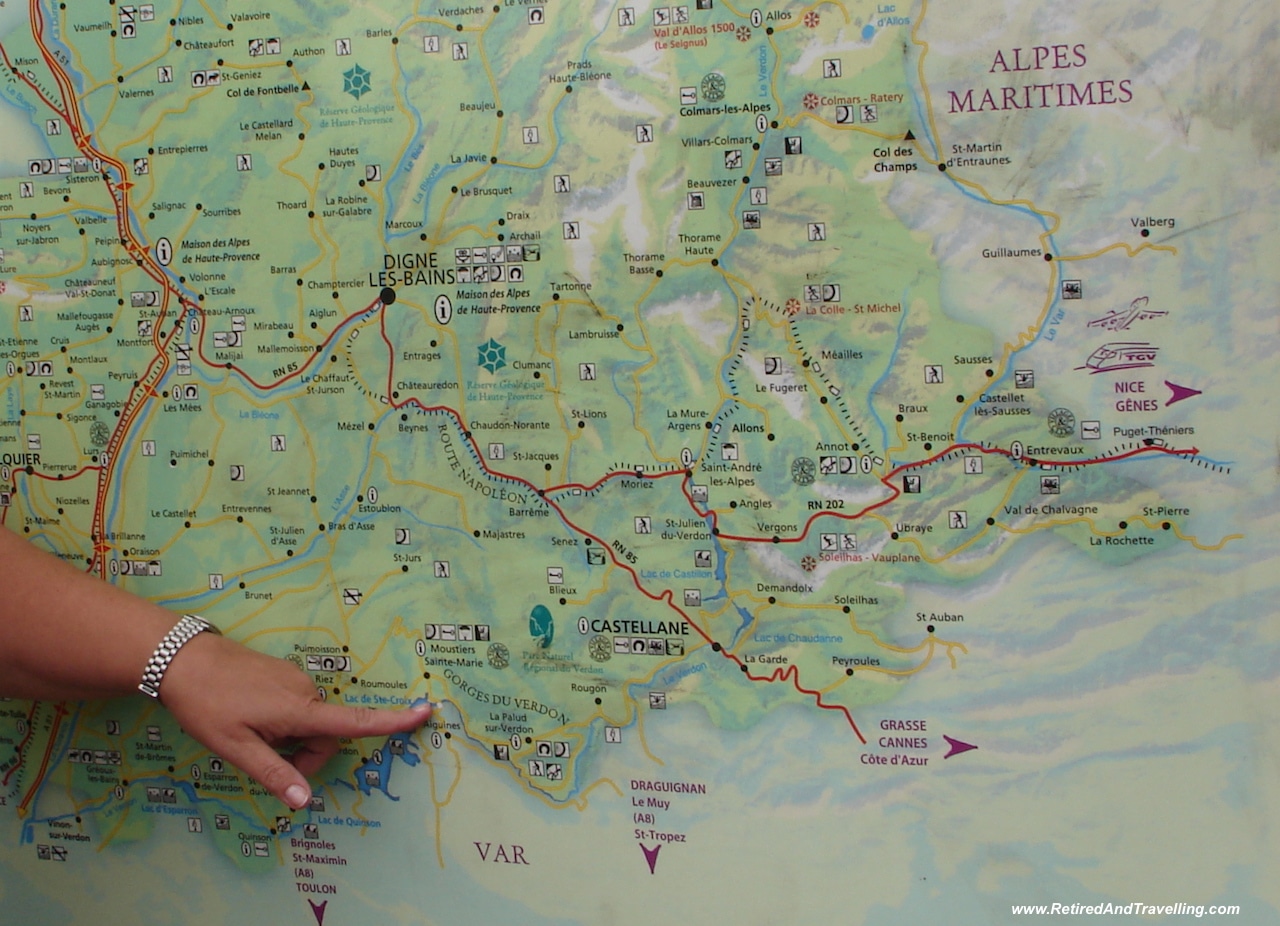 Our instructions to get to the hotel assumed an Autoroute entrance.  But they were so confusing we needed all the help we could get. We managed to get ourselves to old Avignon and to the Pont du Avignon.  So that we at least had a major landmark to navigate by.

Unfortunately getting on the bridge to cross the river to our hotel would be a failure on the first pass – much to David’s disgust. Instead we doubled back through the cobbled streets of the old city, navigating very narrow streets, stalled cars and oblivious pedestrians.

David’s sense of direction and driving a little like a local finally got us up on the bridge. Across the bridge was Les Angles and we easily found our hotel from there on the main drag.

A Great Drive Along The Verdun Gorge Route

The Verdun Gorge route was certainly not the most direct path to get us from Nice to Avignon! But it did provide some great scenery along the way.

Have you travelled the Verdun Gorge route? Did you travel when the rivers were flooding? Was the other side by Pt Sublime a much better route? 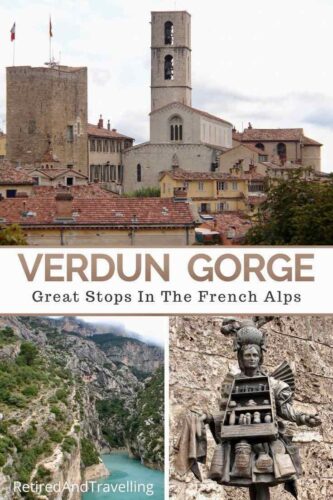 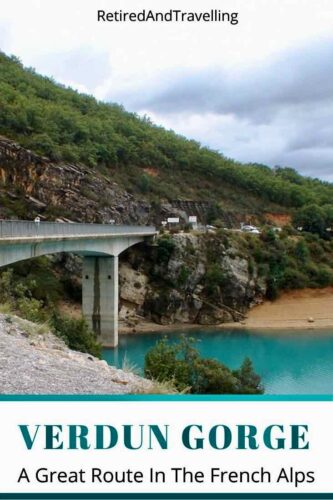 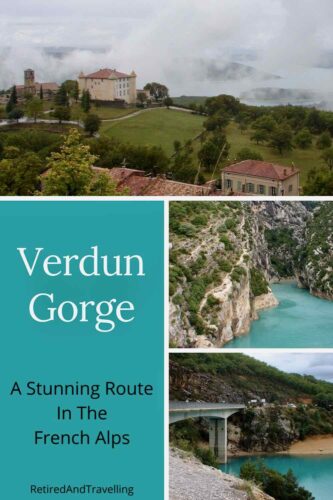