We had seen the most amazing sights in Agra. We started our day with a sunrise trip to the Taj Mahal. From there we were amazed with the beauty we found in the Red Fort. But no cruise ship excursion was ever complete without a stop for shopping. We would find more beauty in the artistry at the Kohinoor Museum!

This stop was billed as a retail therapy fix for our cruise ship group. We generally don’t shop very much when we travel. We have downsized. Our children don’t want more stuff. We would have skipped the stop at Kohinoor Jewellers but we were intrigued by the non-shopping opportunity.

The Kohinoor Family had a long history with the Mughals in India. They moved into the old walled city of Mughal Agra in 1857. The business is currently operated by the fifth generation. The family was a great connoisseur of gems, jewellery and art. Original new jewellery is still produced by the family.

But this stop was not all about shopping! The Kohinoor Museum houses an exquisite private collection of needle and thread. They have an impressive collection of three dimensional handcrafted embroidery and precious artifacts. The art is displayed in a sound and light show. There is no admission charge.

When we entered we got a guided tour of some amazing embroidery pieces. We learned about the technique for creating 3D embroidery art. Pieces are embroidered in cotton threads over and over until the required thickness and movement is achieved. Threads are blended to get new colours. Some of the threads are actually gold. This was our first taste of the artistry at the Kohinoor Museum.

Outside of the museum there were pieces made by students of the artist Sheikh Shams Uddin. These are available to buy but do not match the artistry of the pieces created by the master in the museum.

The Artistry at the Kohinoor Museum

After we saw the commercial pieces we went into the dark museum to see the priceless pieces owned by the family. None of the pieces were for sale. Each piece was unveiled and lighted in sequence so we could focus on the artistry at the Kohinoor Museum. We were not allowed to take photos of most pieces. But the photos we were allowed to take could not possibly demonstrate the awesome artistry we saw.

The first piece lighted was a dress adorned with gold thread embroidery embedded with semi-precious stones. We were told that this piece took the artist 4,170 days to complete. There are 23 wildlife scenes all created by hand. There are fighting cocks in brilliant colours. This took Shams 1,475 days to complete. A stalking Indian tiger required 620 days.

We next saw the amazing Jesus and sheep piece created by the artist Shams. It took 6,570 days to finish. It was created as separate pieces and stitched together.

Both the peacock and flower pieces that we saw were brilliantly coloured three dimensional pieces. If you looked closely you could see the jewels embroidered in.

We were able to take pictures of the piece created as an elaborate tribute to the wife of Emperor Shan Jahan after she died in childbirth in 1631. The Taj Mahal was depicted by Shams in the brilliant white colour of the Taj Mahal in the middle of the day.

And Then The Shopping Began

Totally awed, we then took the escalator to the jewellery store. We were told that we could get a high quality gems at reasonable prices (discounted only by the 8% tax). Before we were let loose in the store, we were shown a Mogul period necklace with a giant emerald. It is a good thing that green is not my colour!

As we wandered from counter to counter, we received some education on gems. We were not really tempted. But many others emptied their wallets. Since the guide got his commission on the sales, he let people wander and shop far longer than we expected. Because we ran so late, we did not visit the place to see the inlay work being created. This is a vanishing art in India. Unfortunately, we also lost a chance to get lunch before we started the long drive back to Delhi.

So Much Artistry Is On Display in Agra

We had seen so much beauty on our trip to Agra. First we saw the colourful display of light at the Taj Mahal at sunset and sunrise. Then we toured the vast expanse and beauty of the palaces at the Red Fort. Despite the very long stop at the Kohinoor shop, we were glad to have been able to see the artistry at the Kohinoor Museum. We would never look at embroidery in quite the same way again! Had we been in the market for jewellery, there was a great selection. Certainly, many people walked away quite happy with their purchases.

Have you seen the artistry at the Kohinoor Museum? Did you have a favourite embroidery piece in the museum? Did you buy jewellery? 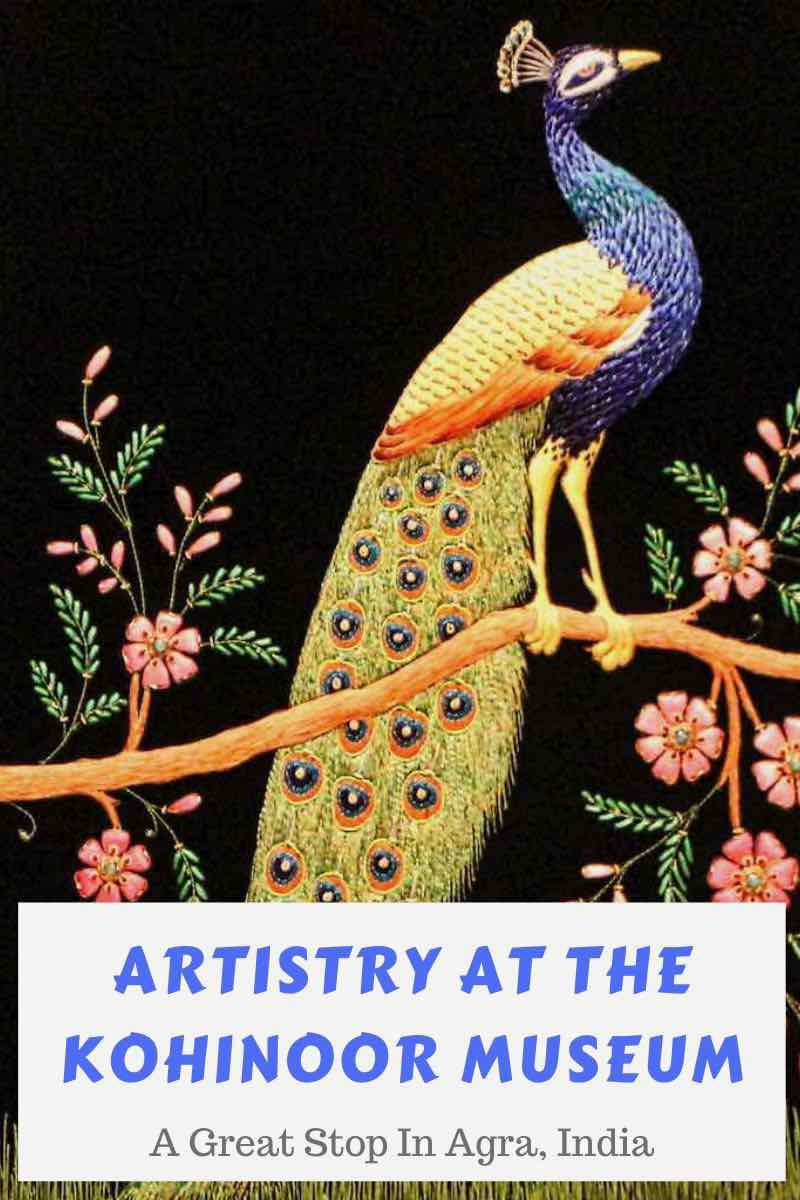 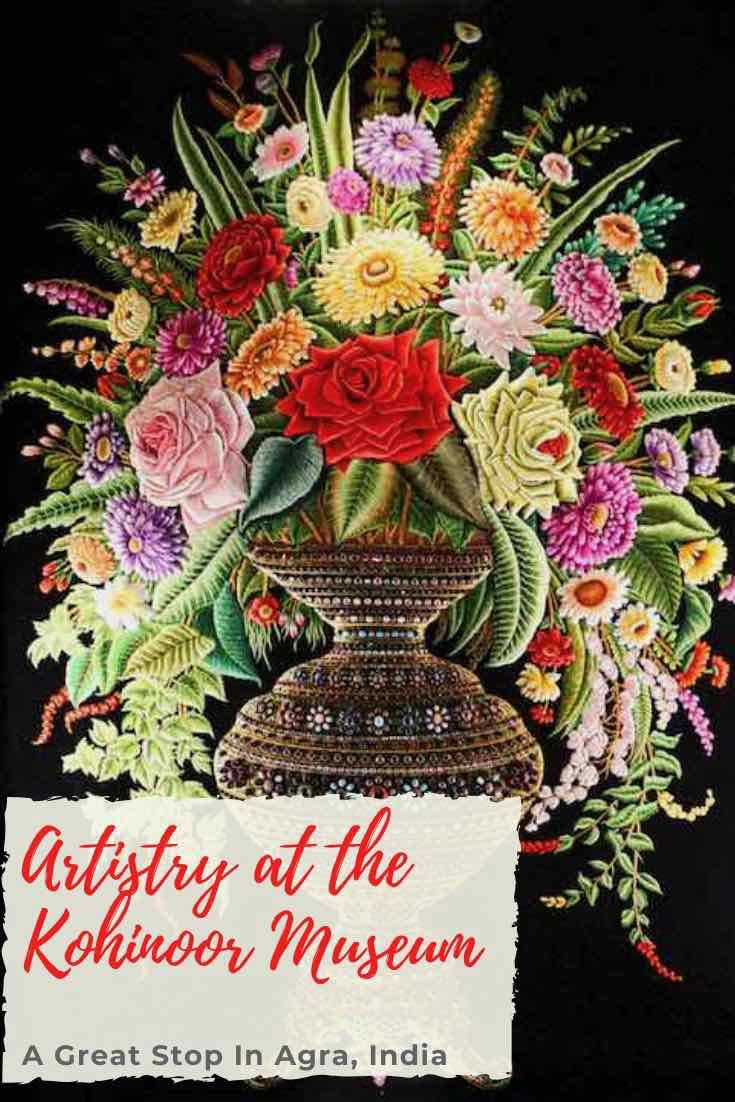