Starting A Cruise In Miami

We were off on our next 10 week adventure. The first leg was a short 3 hour hop to Miami for a few days. This would let me unthaw from the Toronto winter. One of the big advantages of starting a cruise in Miami was the lack of jet lag. This meant we could hit the ground running and still be relaxed when we began our cruise.

The trip from the Miami airport to the Intercontinental Miami reminded me why Uber has become so popular. We walked half the airport until we found a cab stop that would actually pick up passengers. When we got in, the rolled down windows should have been the first clue. The filthy cab with no air conditioning was not the way to start our vacation! The driver didn’t even get out to unload our luggage when we pulled in at the hotel. 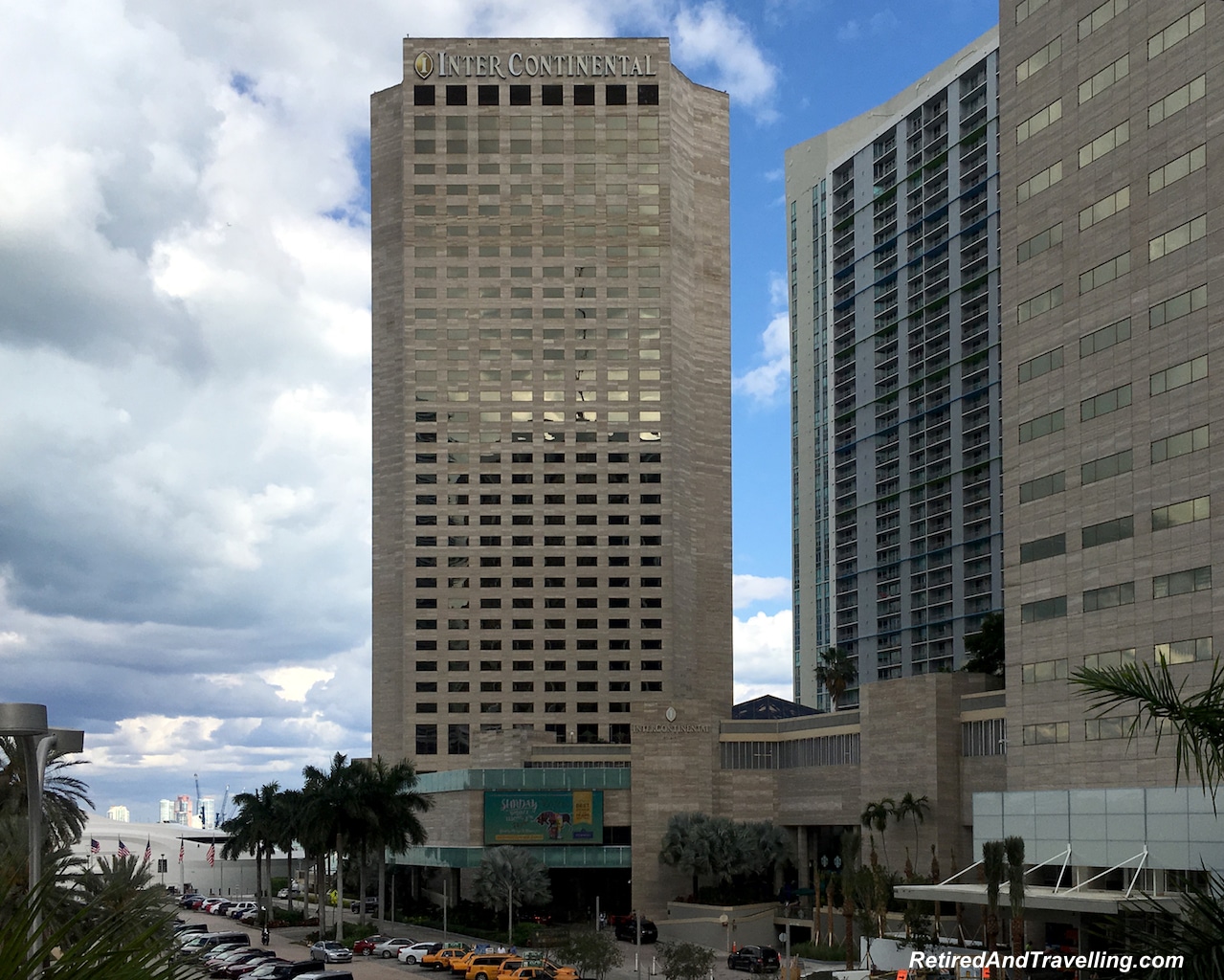 We went immediately to the concierge lounge on the 29th floor to check in. IHG is one of the hotel chains where we have consolidated our loyalty points and our Ambassador Platinum status got us an awesome upgrade. Our suite was bigger than our condo at home! We have been spoiled with great suites in both Bali and Thailand on previous trips!

Checking Out Our Temporary Home

We dropped our bags in the foyer of our suite, between the two bathrooms. Yes, guests would have their own bathroom! The bedroom was totally separate from the living room and both where huge. 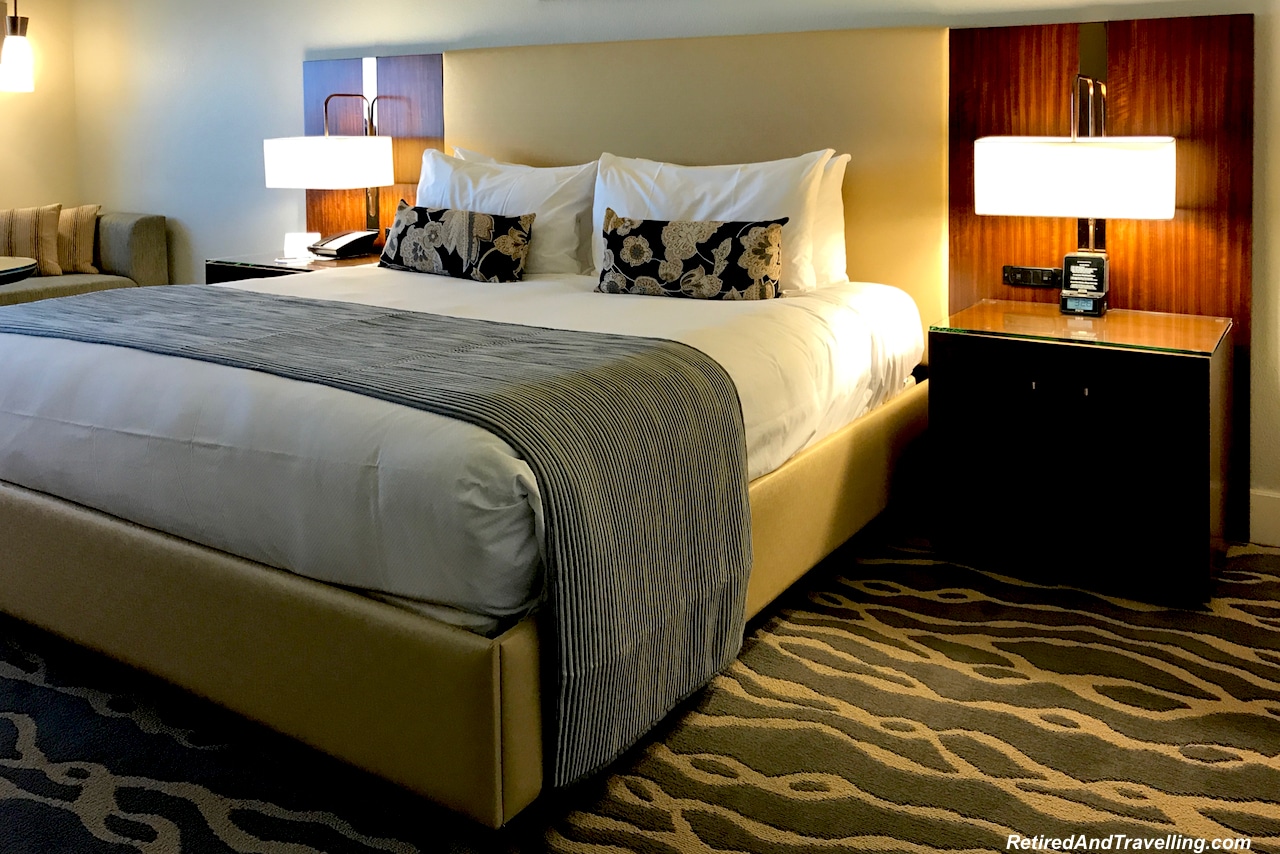 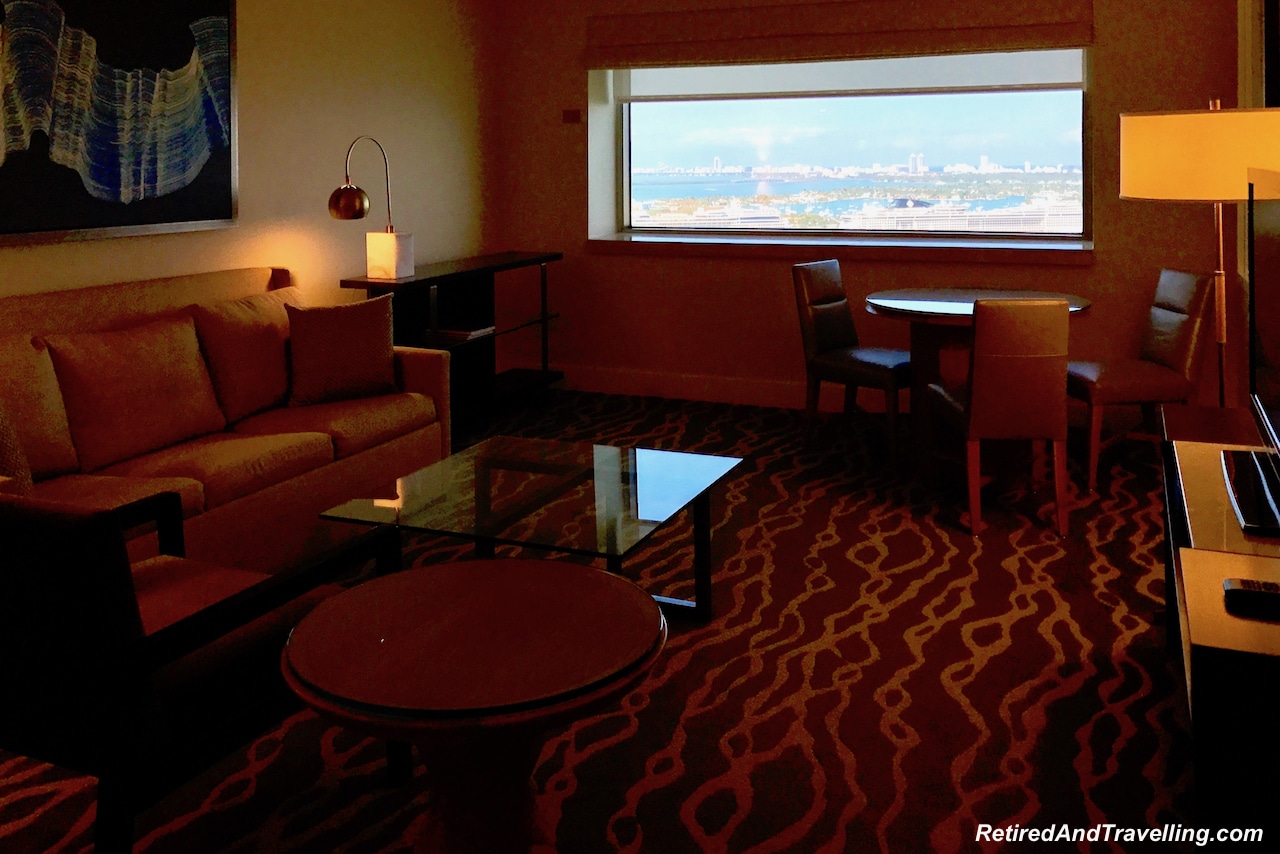 Each room had a window that overlooked the Miami harbour. We never tired of our view! It was a teaser that we would soon be starting a cruise with Oceania Cruises in Miami. 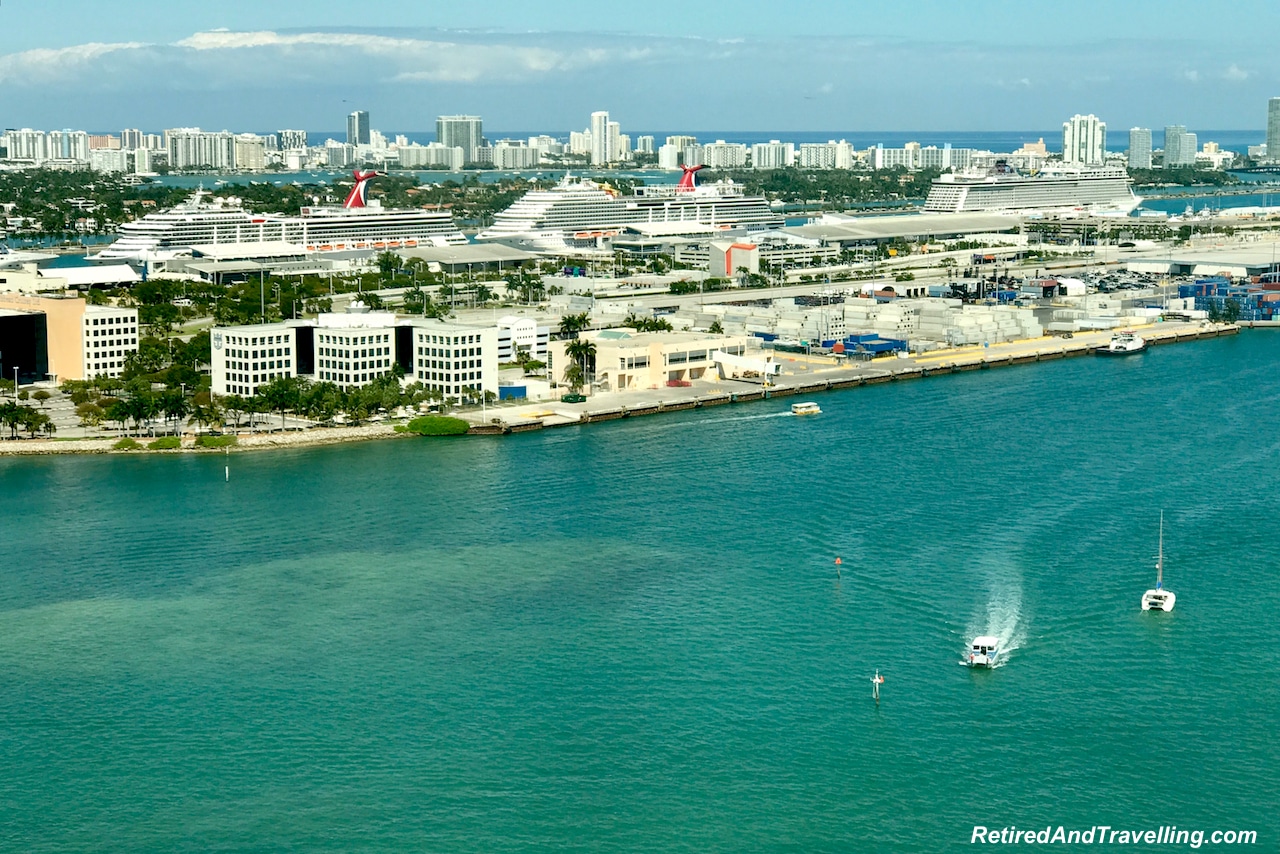 We arrived in Miami shortly after my birthday. Champagne and a birthday treat greeted us. Such a nice touch! 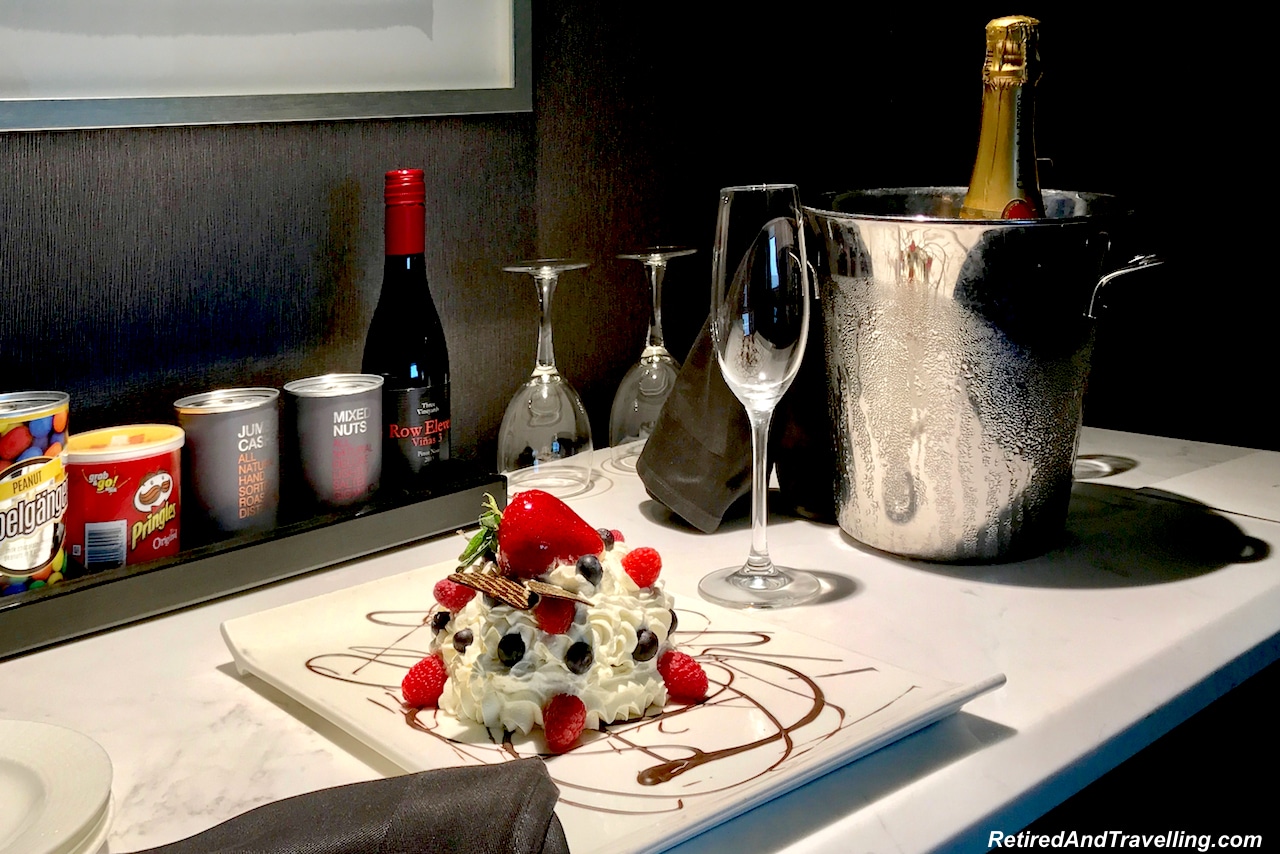 Even with such a big room, we did spend some time in the lounge. We still had some trip planning to do so it was nice to sit in the lounge with a cappuccino and high speed internet. Breakfast was served in the lounge. In the early evening, we got drinks and appetizers in the lounge. It was a great way to start our next adventure. 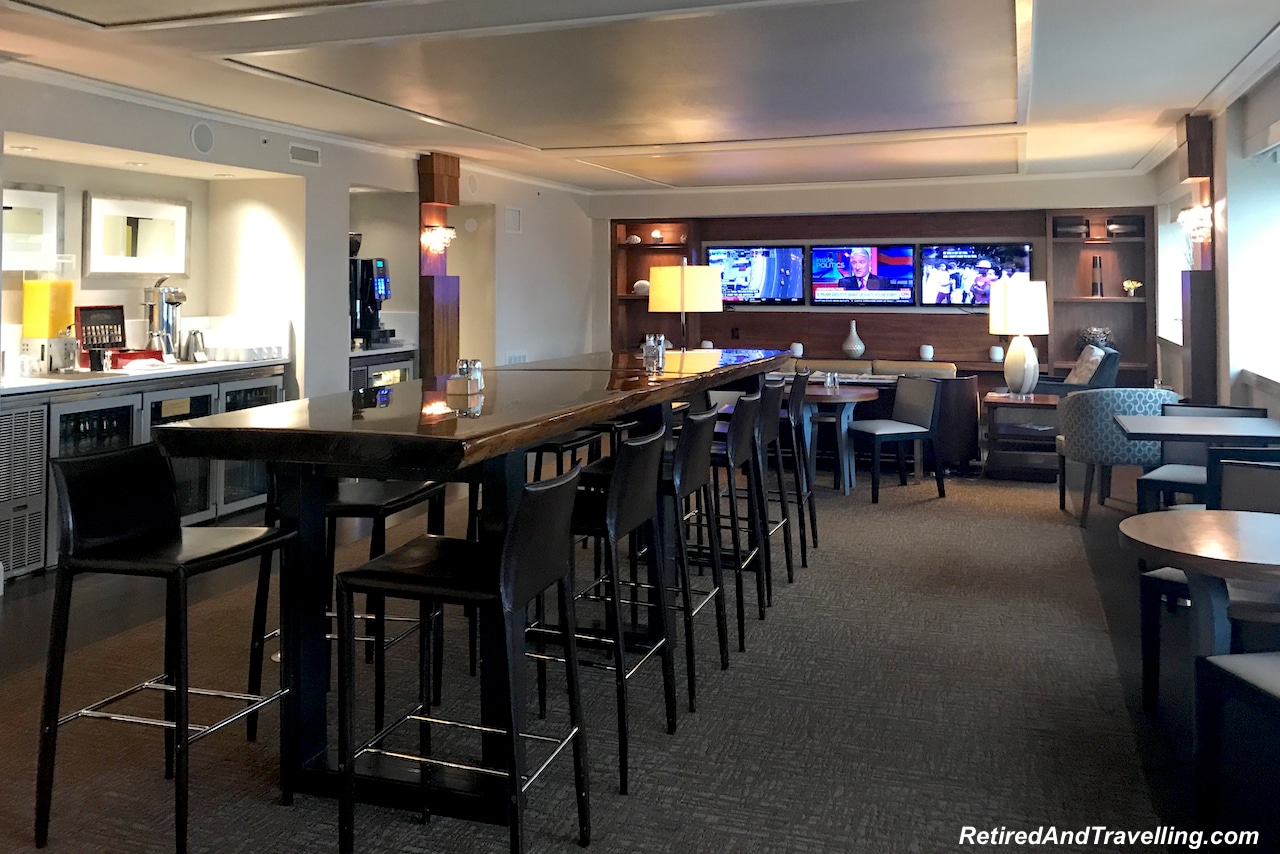 Lots of Ways To Get Around Miami

Our hotel was right on the waterfront. From there we could walk into downtown or along the harbour. The Bayside Park was right there. The Seafair megayacht was docked by our hotel. It hosts special events but nothing was happening the weekend we were in town. 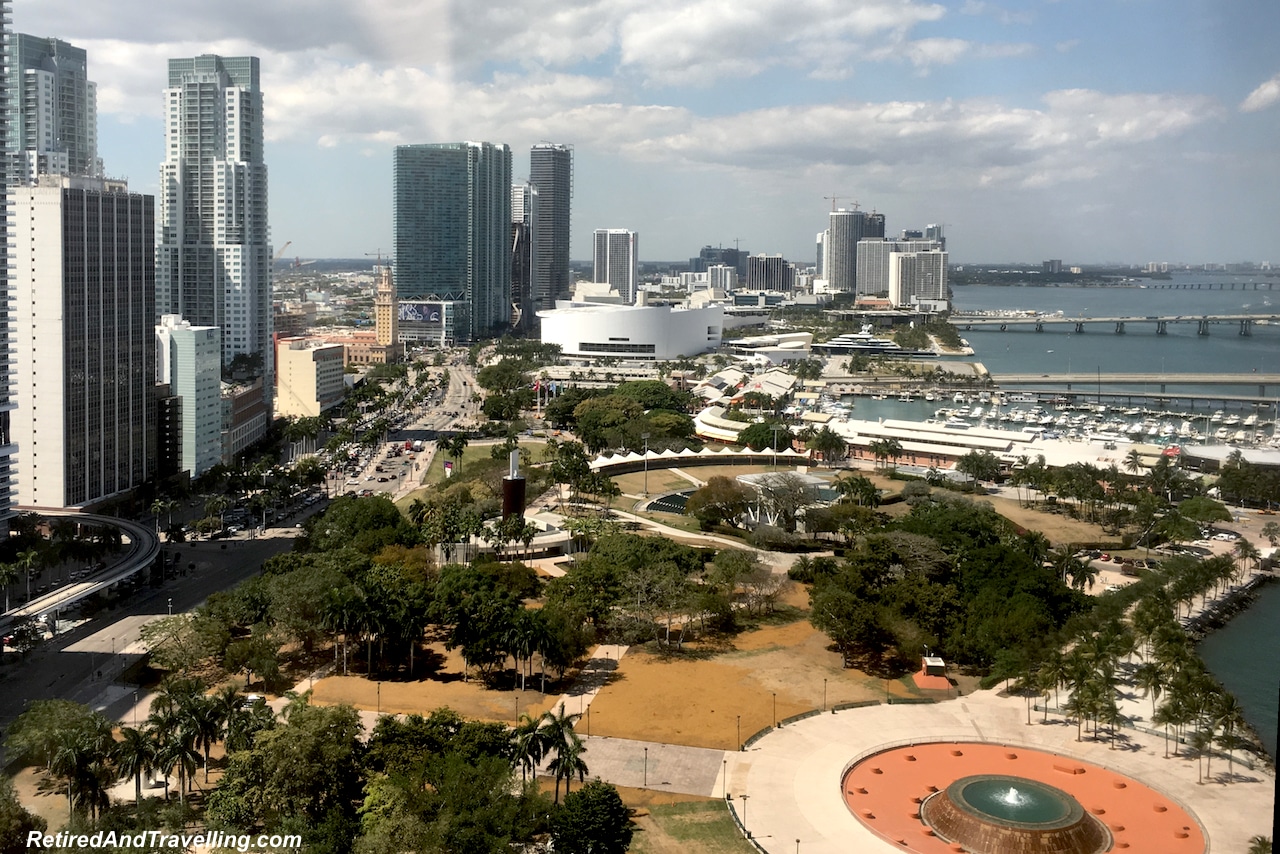 We used the city bus to head out to South Beach. Since we were only in town for a few days we didn’t get a pass or an app to pay. We just made sure to have $2.25 in cash for each trip. There is also a free people mover that travels around the downtown area. The Metromover monorail ran on rubber wheels on a track high above the street. 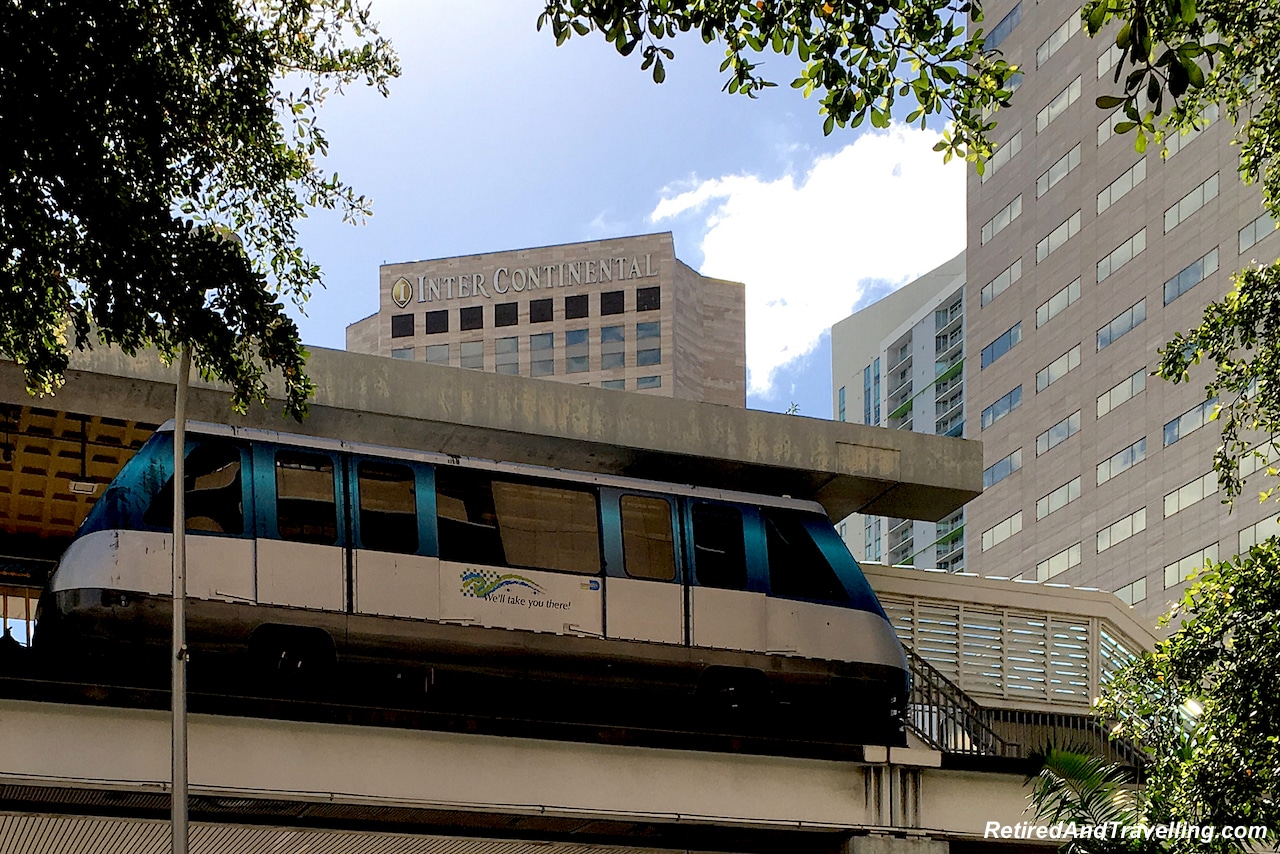 We transferred to this on our return from South beach, just to try it out. The ride gave us a bit of a sightseeing tour. 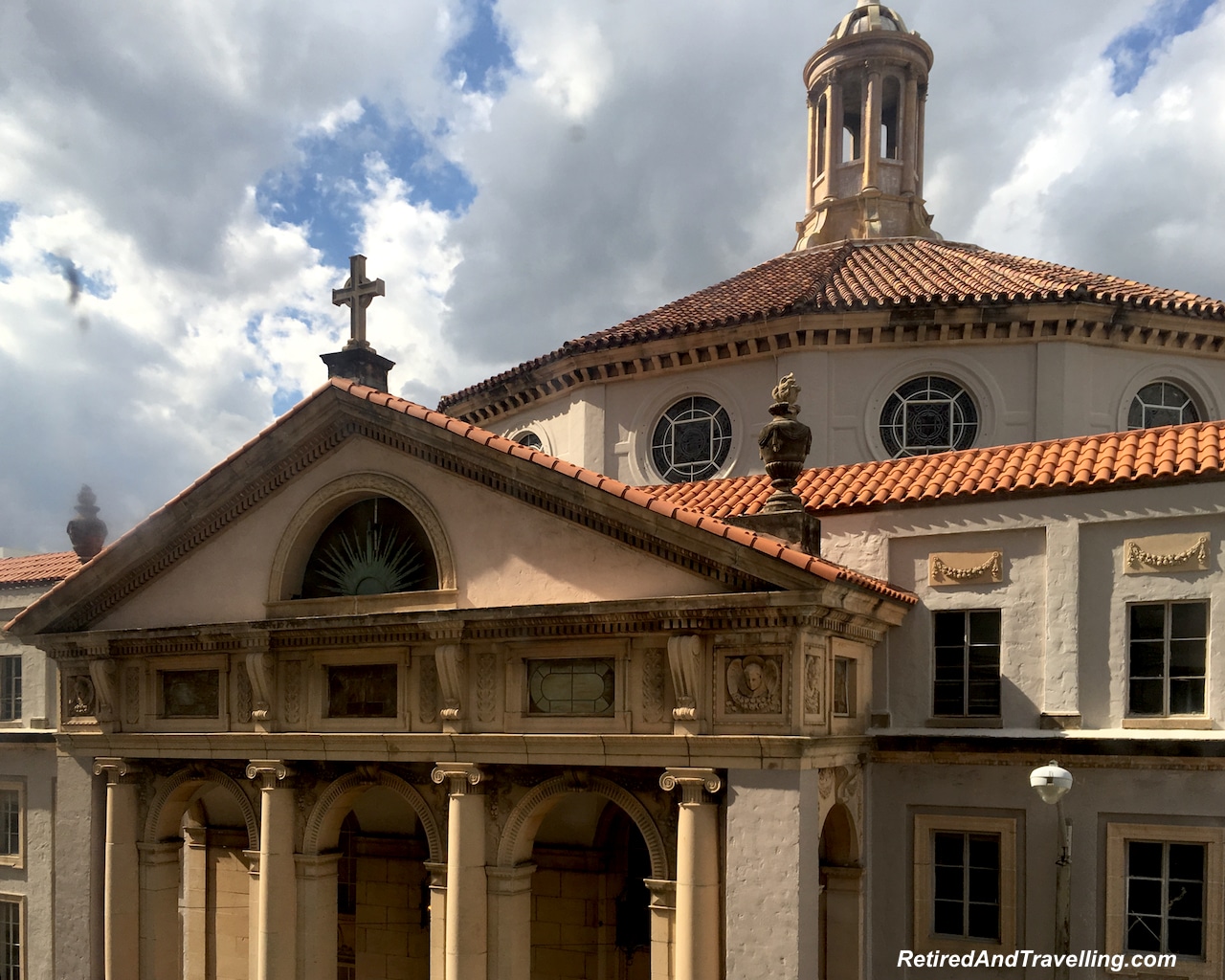 There are several free trolley routes if you want to hop on and hop off for free. The last time we were starting a cruise in Miami, we used the free trolley from the cruise ship port into downtown. But there are other routes that you should check out. 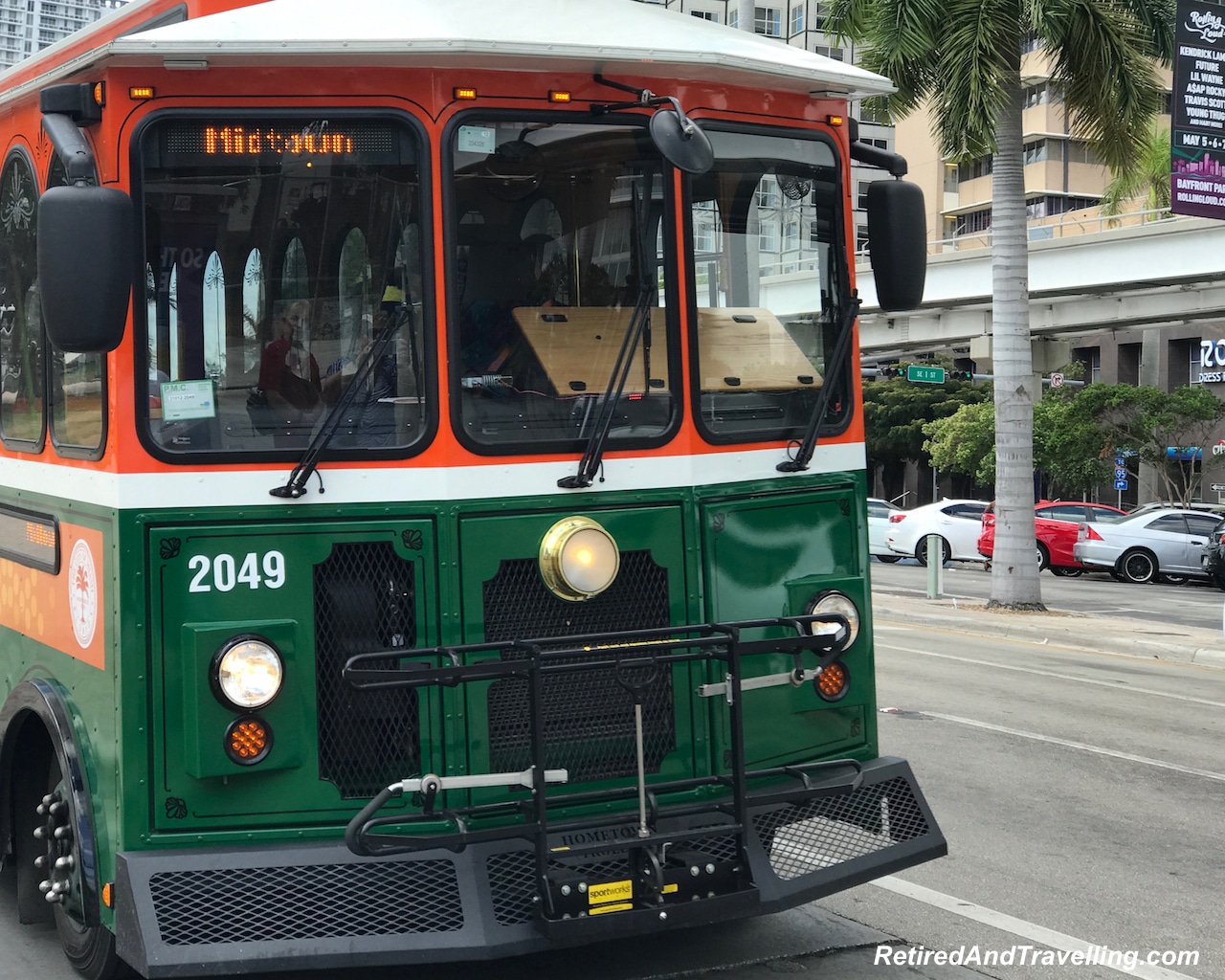 We were sure there would be water taxis to get between downtown and South Beach, but we did not find them. With water all around, you can be sure there are water options for travel.

There used to be time when Canadians shopped in the U.S. with abandon. The prices were good and the Canadian dollar was much higher than the U.S. dollar. None of that is currently true. We found prices in Miami to be high. Most things were the same as the Canadian price but in U.S. dollars. When we added in about 30% exchange rate, we were not shopping for anything but essentials!

This trip was 10 weeks long. Normally we would have packed to cover the variety of types of travel we would do. This means not packing light. But we had a problem on this trip. We were hopping to the Azores in Portugal for 10 days. The weight allowances for the flights between islands were very small. This meant packing from home to the baggage limits we would hit in the Azores.

While we could plan for a little drop in weight through the month before we headed to the Azores, we needed to be very careful. But paring down the packing meant a shopping trip in Miami for a few essentials. Unfortunately, David’s hard drive crashed just before we left, so he got to indulge his geeky self with a visit to Best Buy for a new hard drive.

We did get to shop for consumable items before starting a cruise in Miami. In this case it was wine and champagne to take on our cruise. Occasionally we like to indulge with a drink on the balcony of our cabin! The first two liquor stores in downtown Miami did not offer anything interesting. But when we hit the big store, we got to see the wide variety of U.S. shopping. There was a great choice of wines and I even found rosé wine gummy bears! 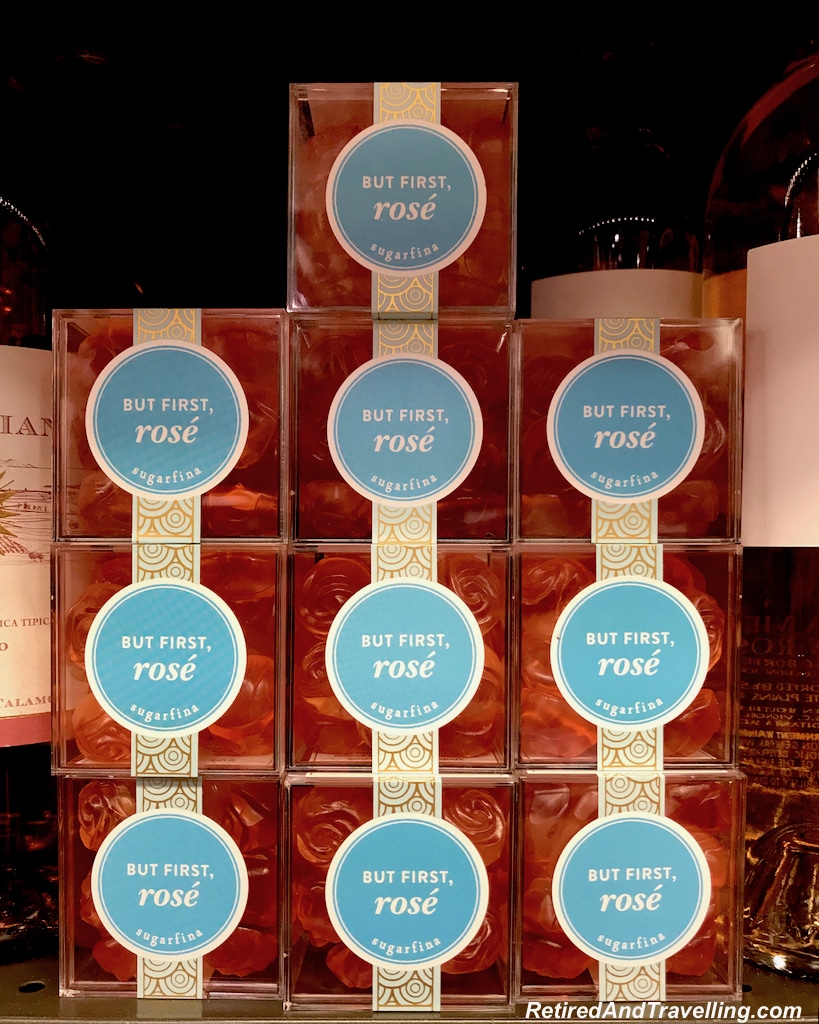 Our one excursion before staring a cruise in Miami this time was a visit to South Beach. 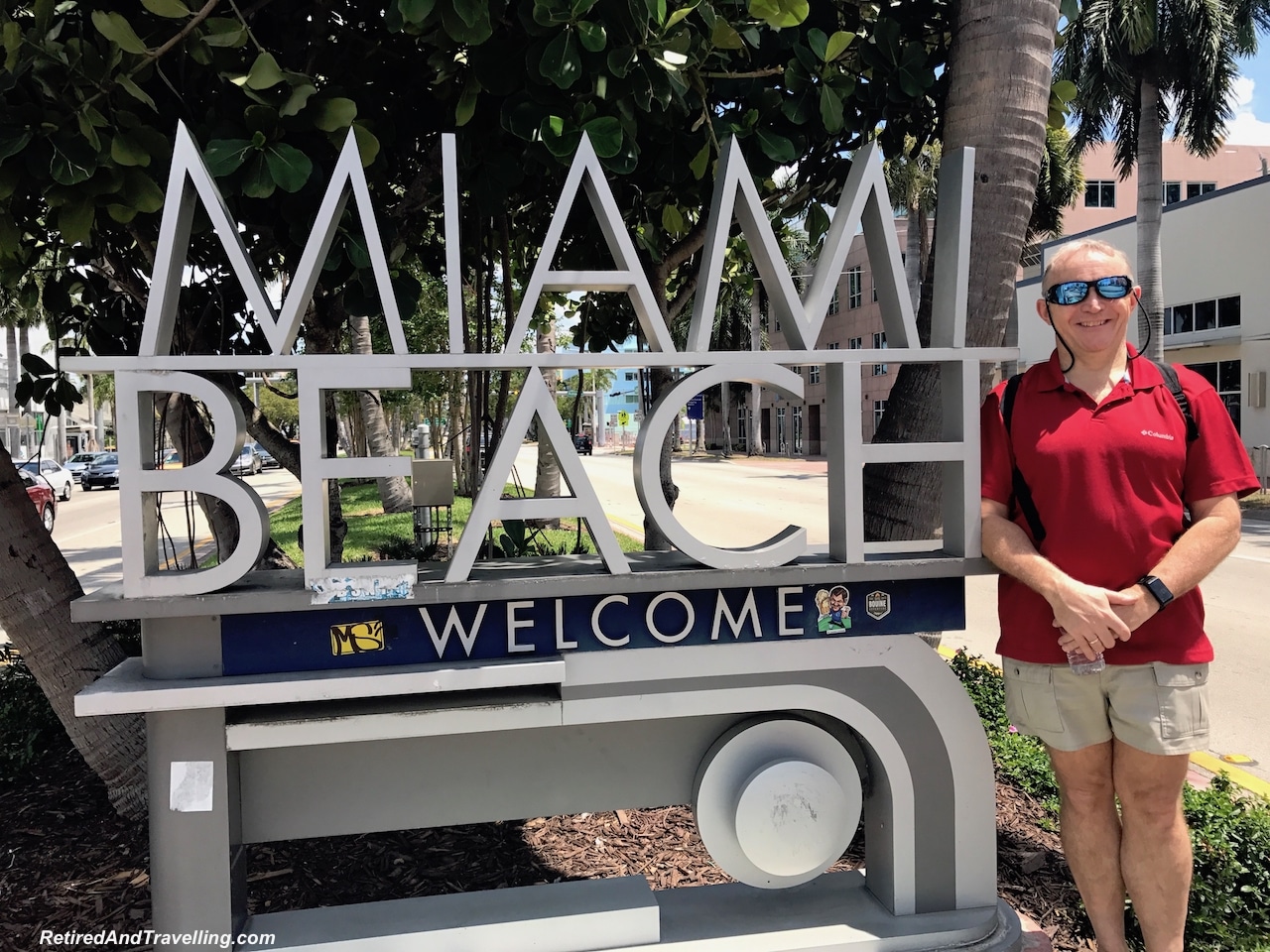 After our shopping expedition at Best Buy, we headed for the waterfront path. We could look at the cruise ships all lined up in the port. We were not the only ones starting a cruise in Miami! Boats continually went up and down the waterway. The drones were down because the winds were too high. 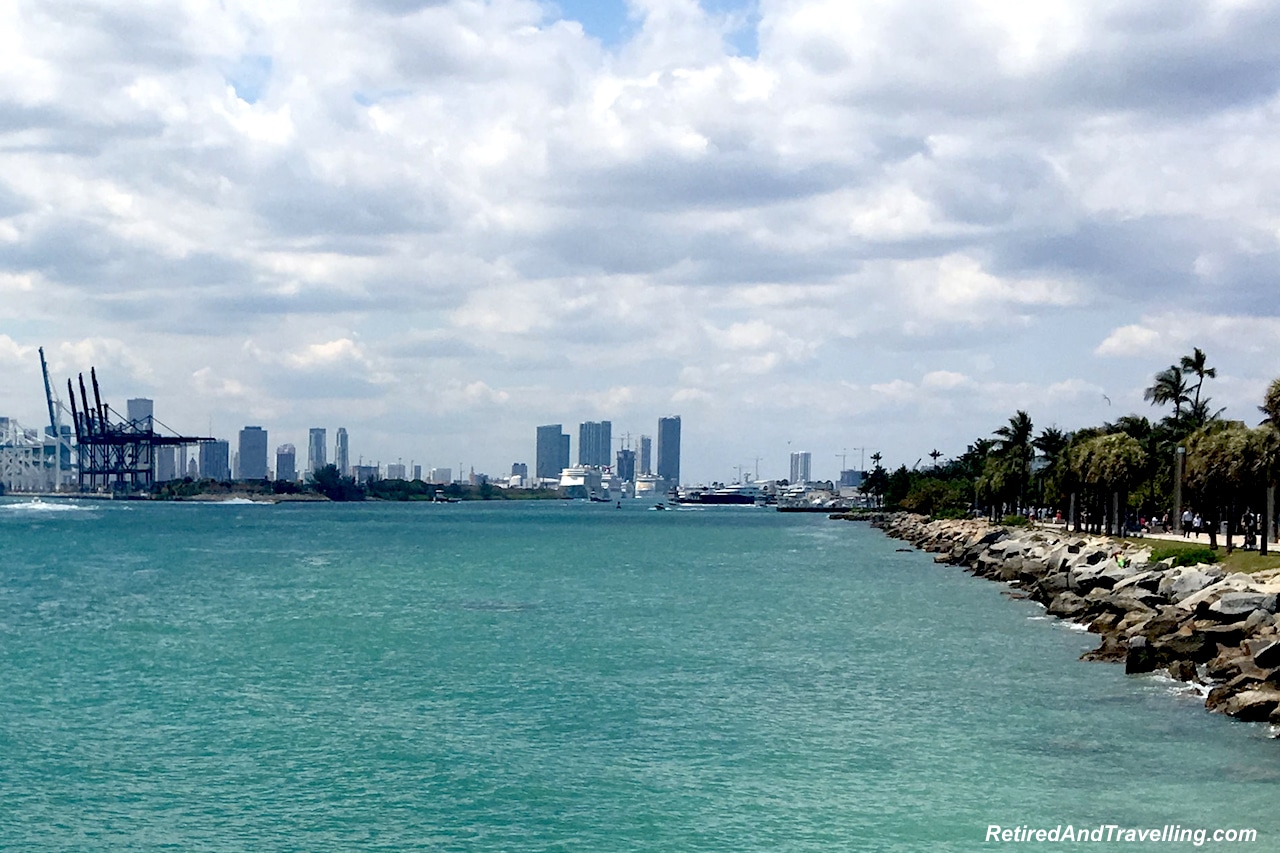 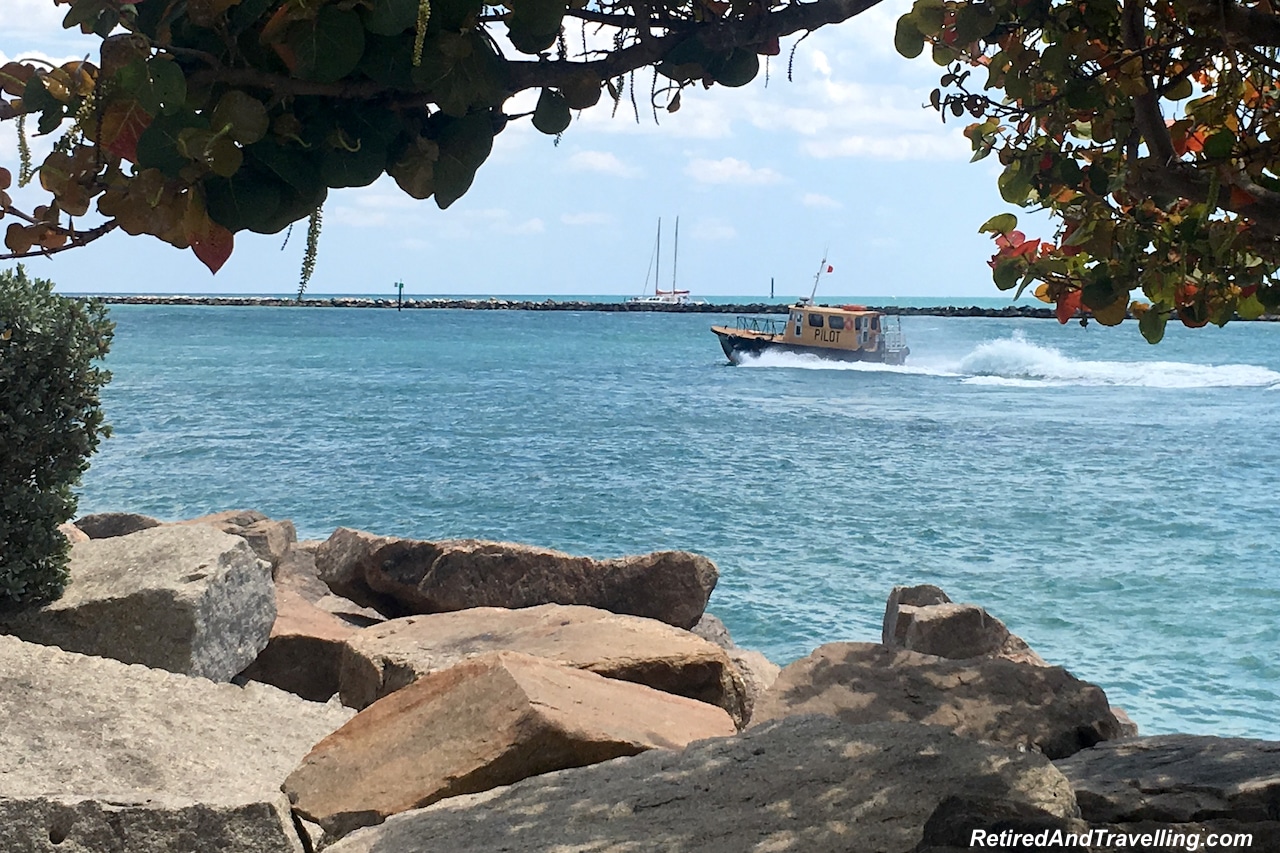 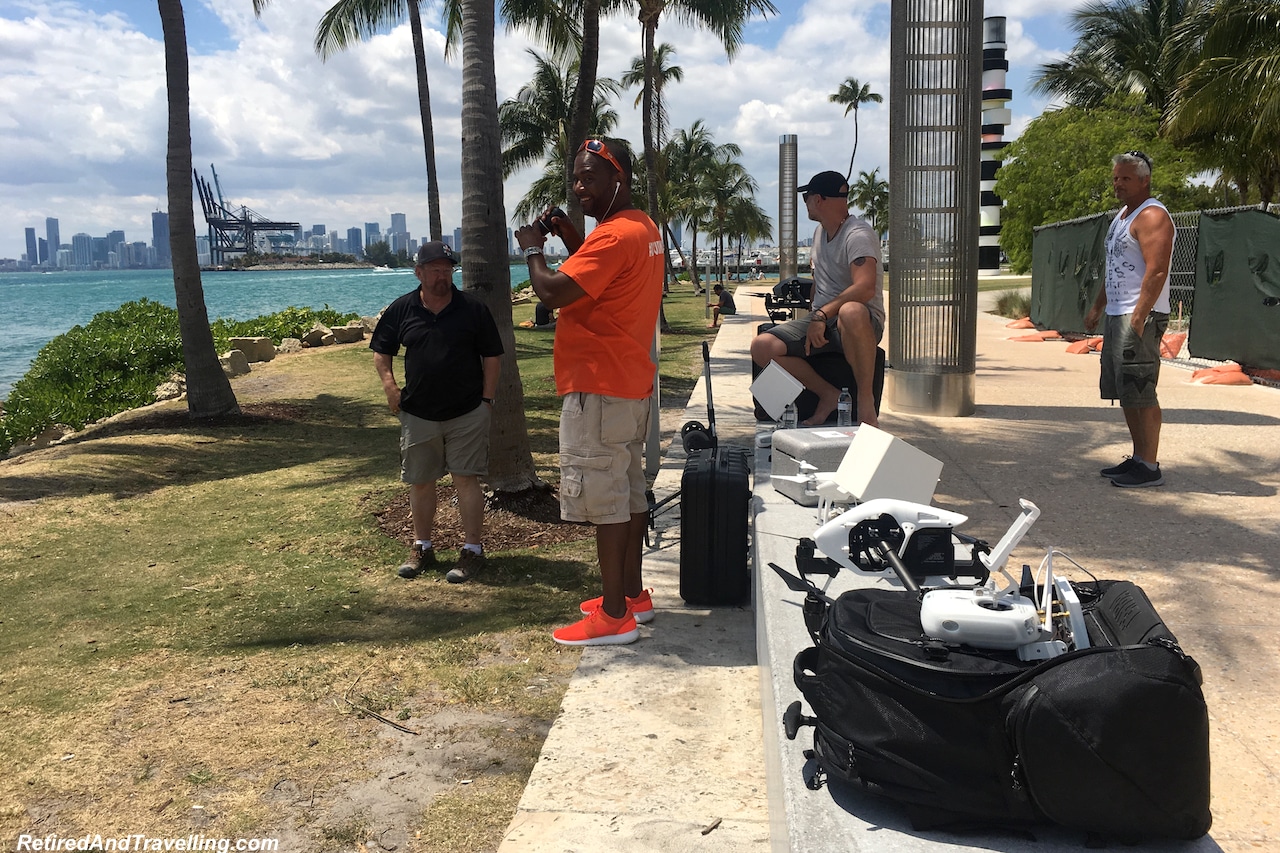 We stopped for a break by the Obstinate Lighthouse statue. We remembered passing this on our last trip out of the Miami harbour. 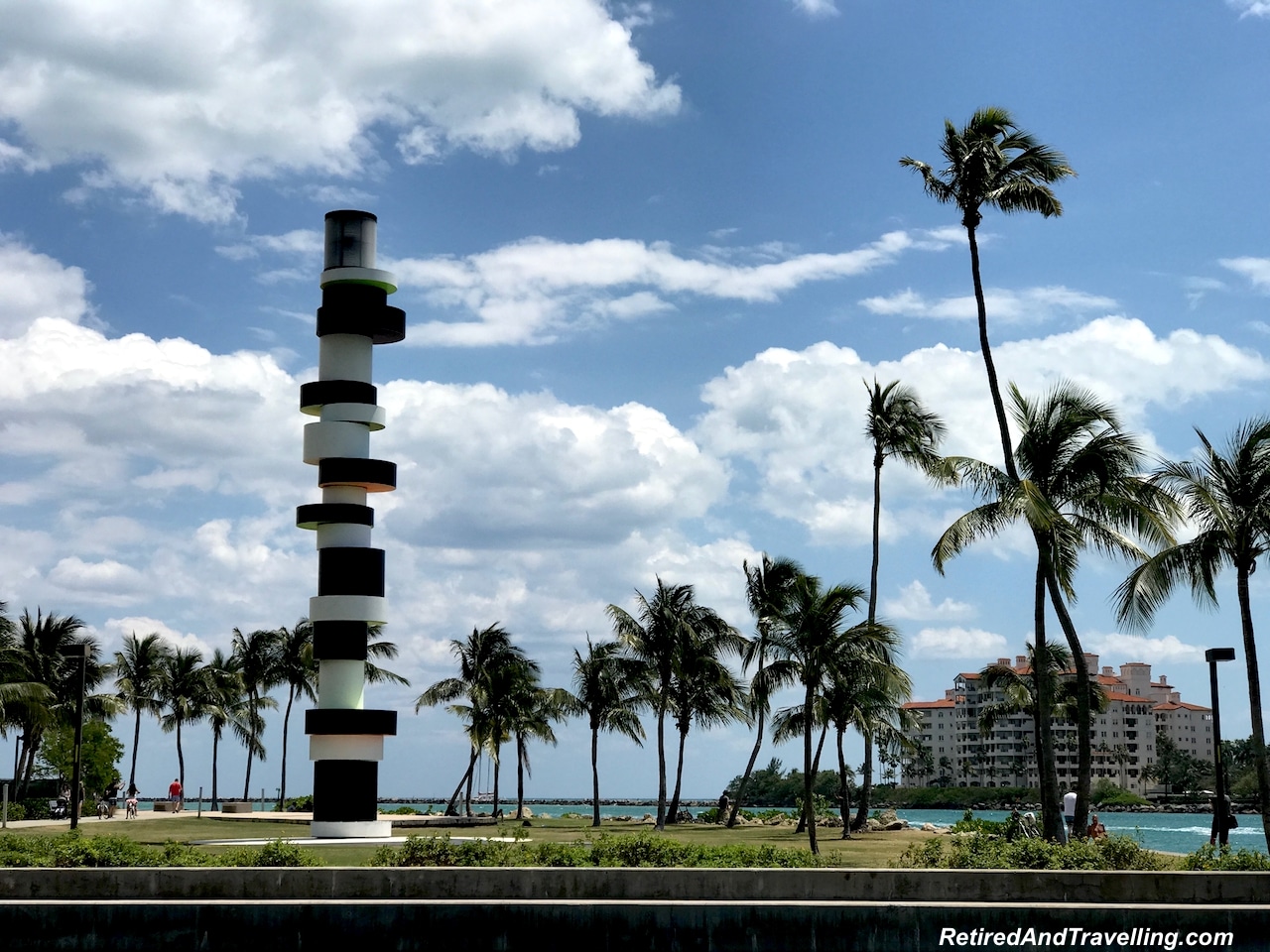 It was time to stop for a drink along the waterway. The only restaurant right on the waterway was the Smith and Wollensky Restaurant. There were a few tables right by the water and others that overlooked the waterway. But we were not the only ones looking for a table! 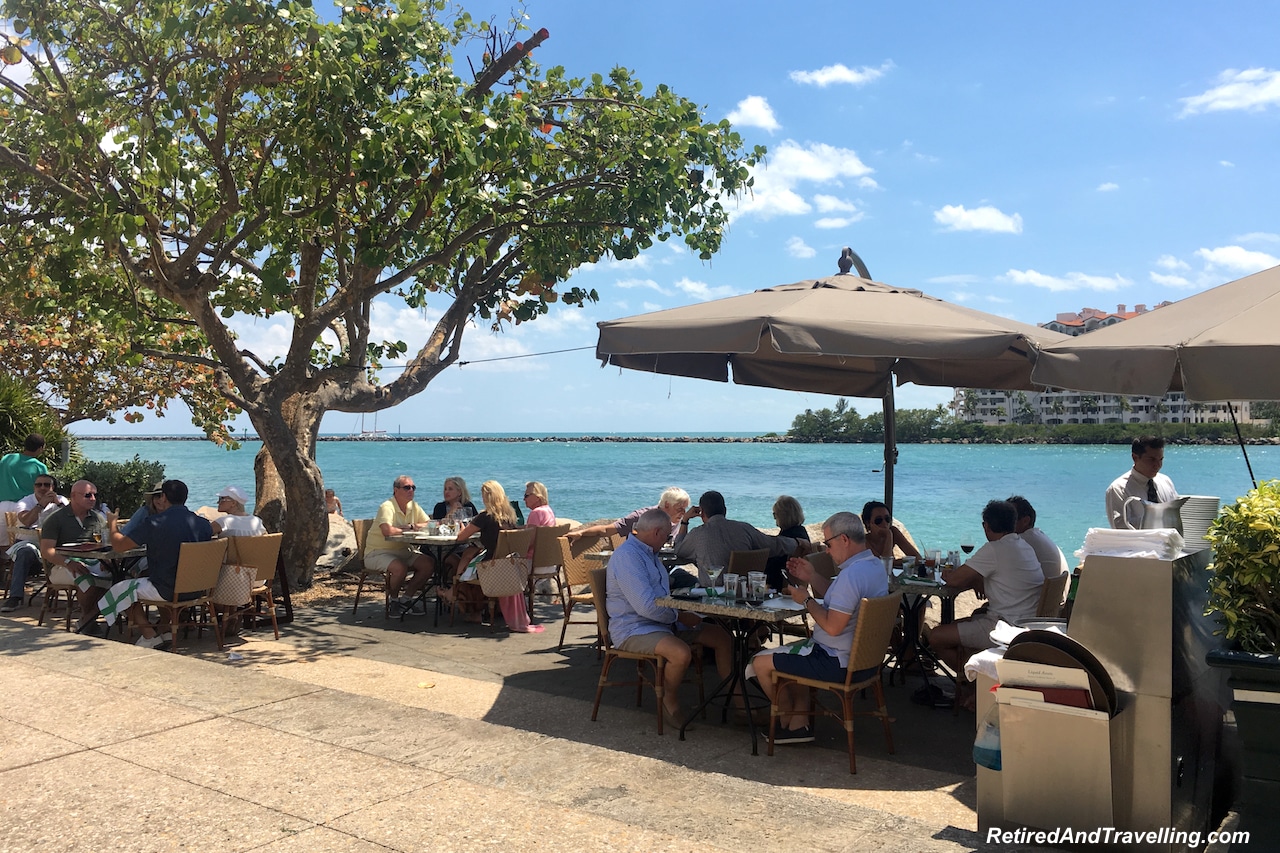 Finding the Beach at South Point

We walked until we hit South Pointe Park Pier. From this point we looked back along the waterway in one direction and over the beach in the other direction. It was a popular spot, but as usual, a little patience gave us a good shot of this landmark spot. 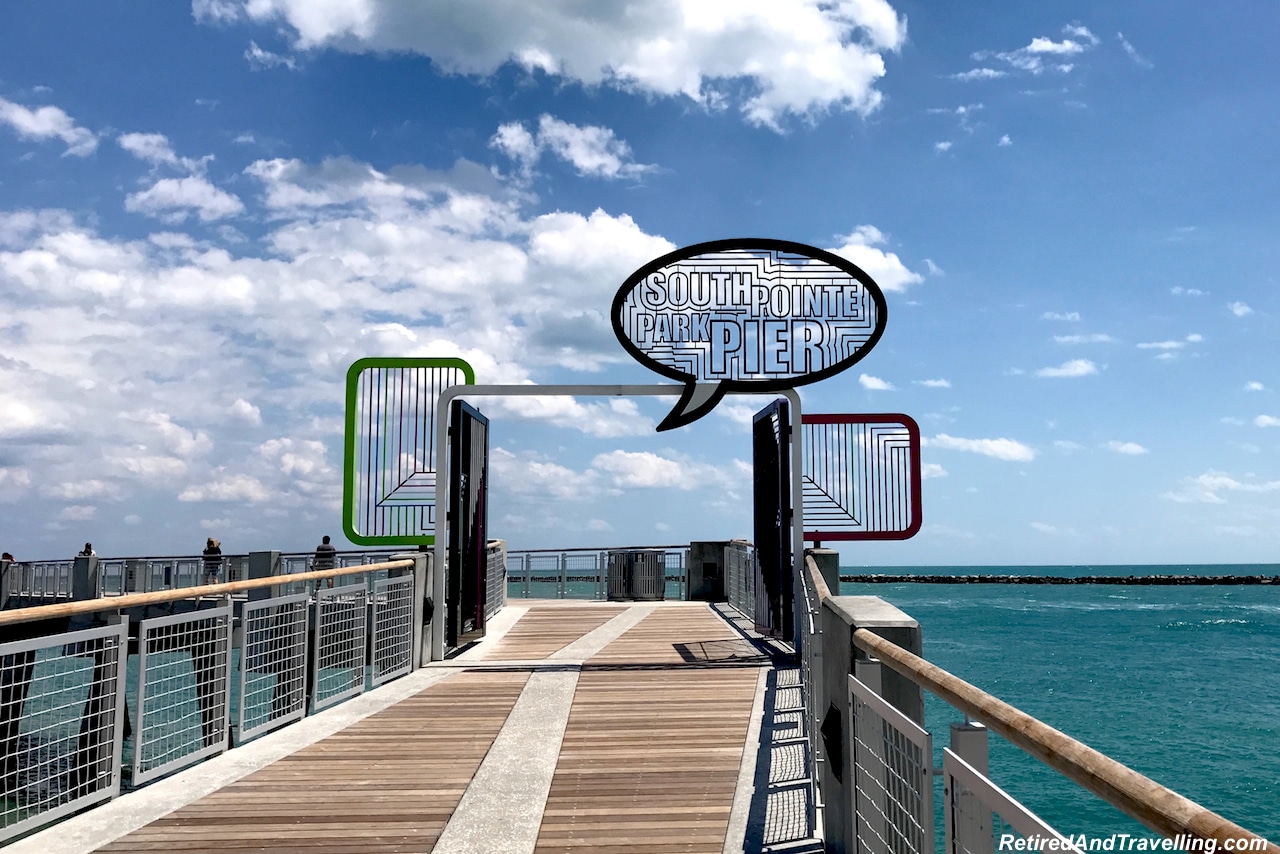 It was Sunday and the beach was full. The waves rolled in slowly. The families enjoyed a day in the sun. 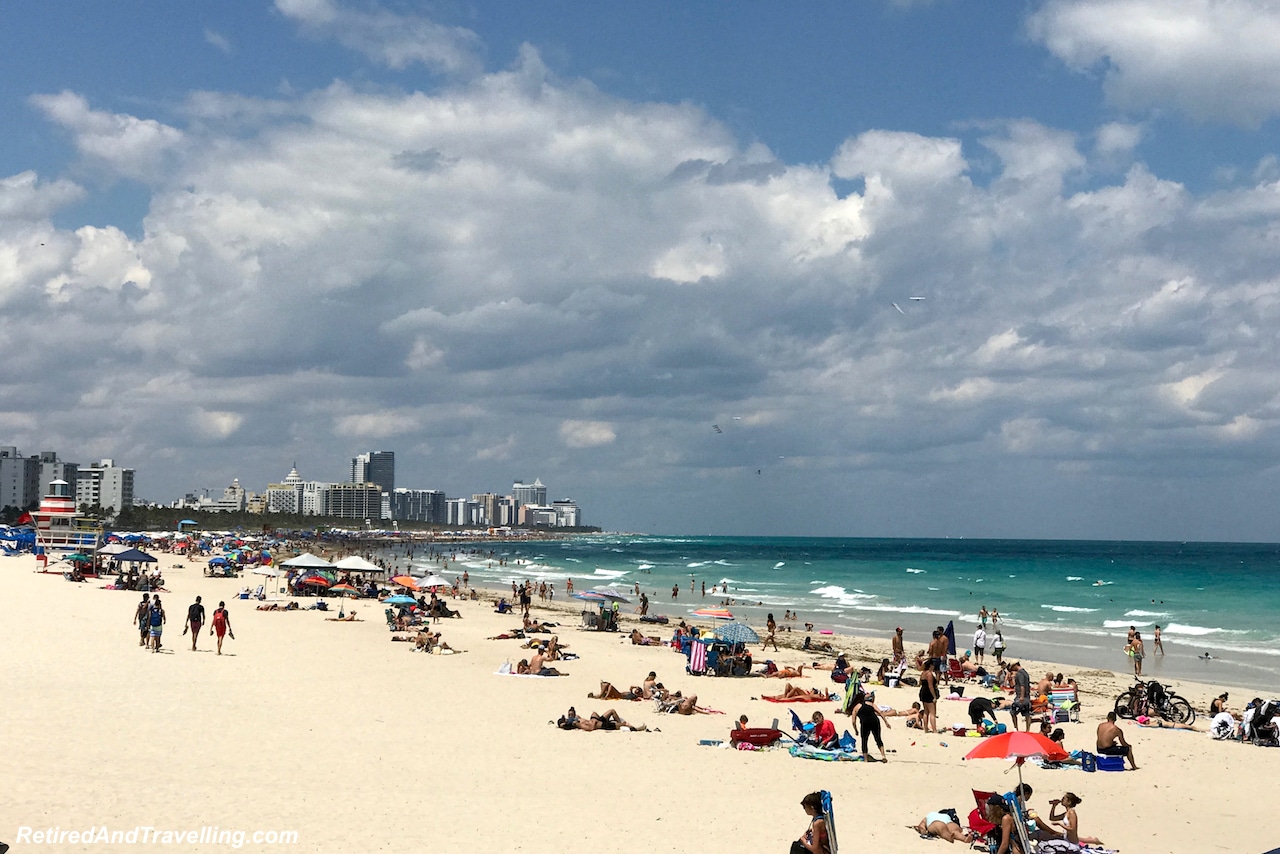 We began the slow walk back from the beach. We wished we had taken the rental bikes! 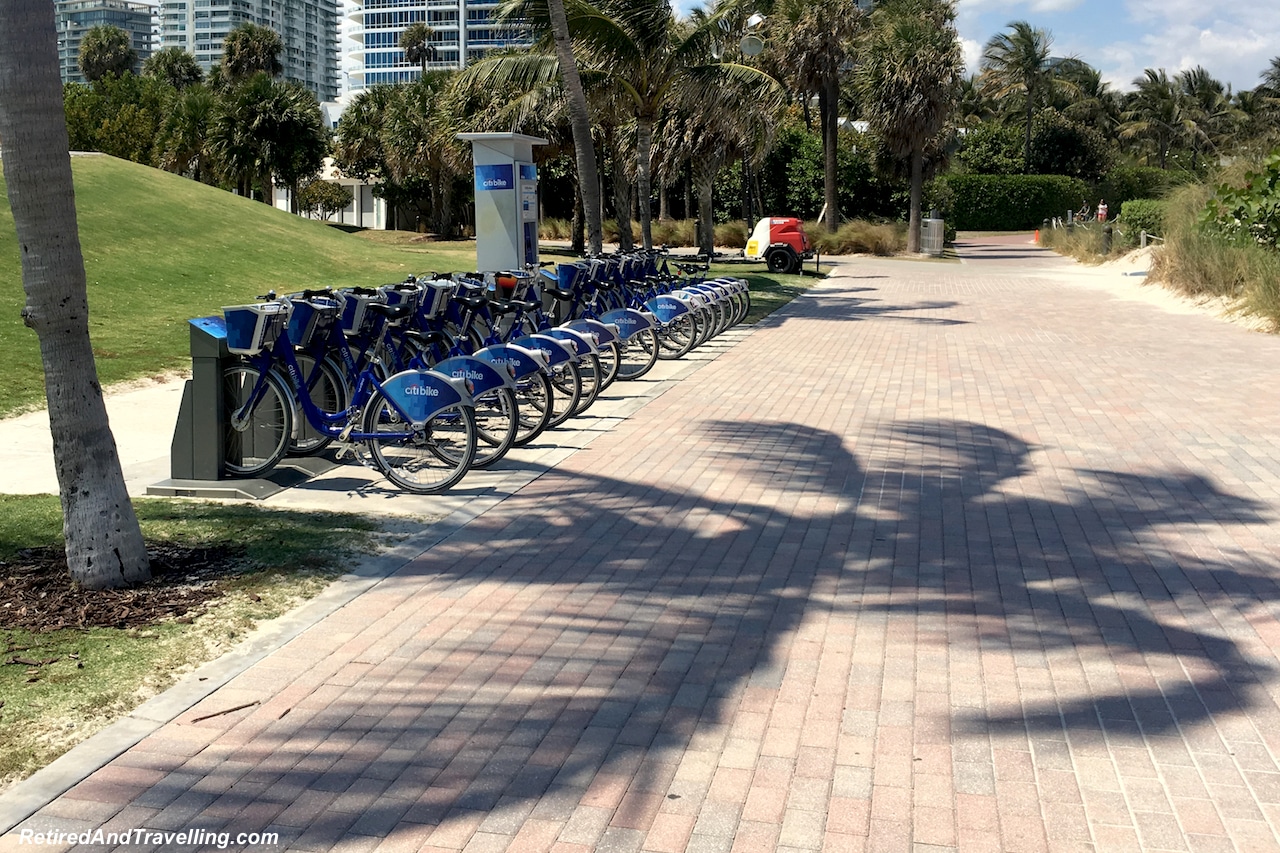 The Sights of South Beach

As we wandered around South Beach, we saw interesting buildings. We laughed at the building with the palm trees and cactus on the roof. We were not in Toronto any more! The buildings were colourful and one was even decorated as art. Courtyards were in bloom and we saw orchids that grew on a tree. 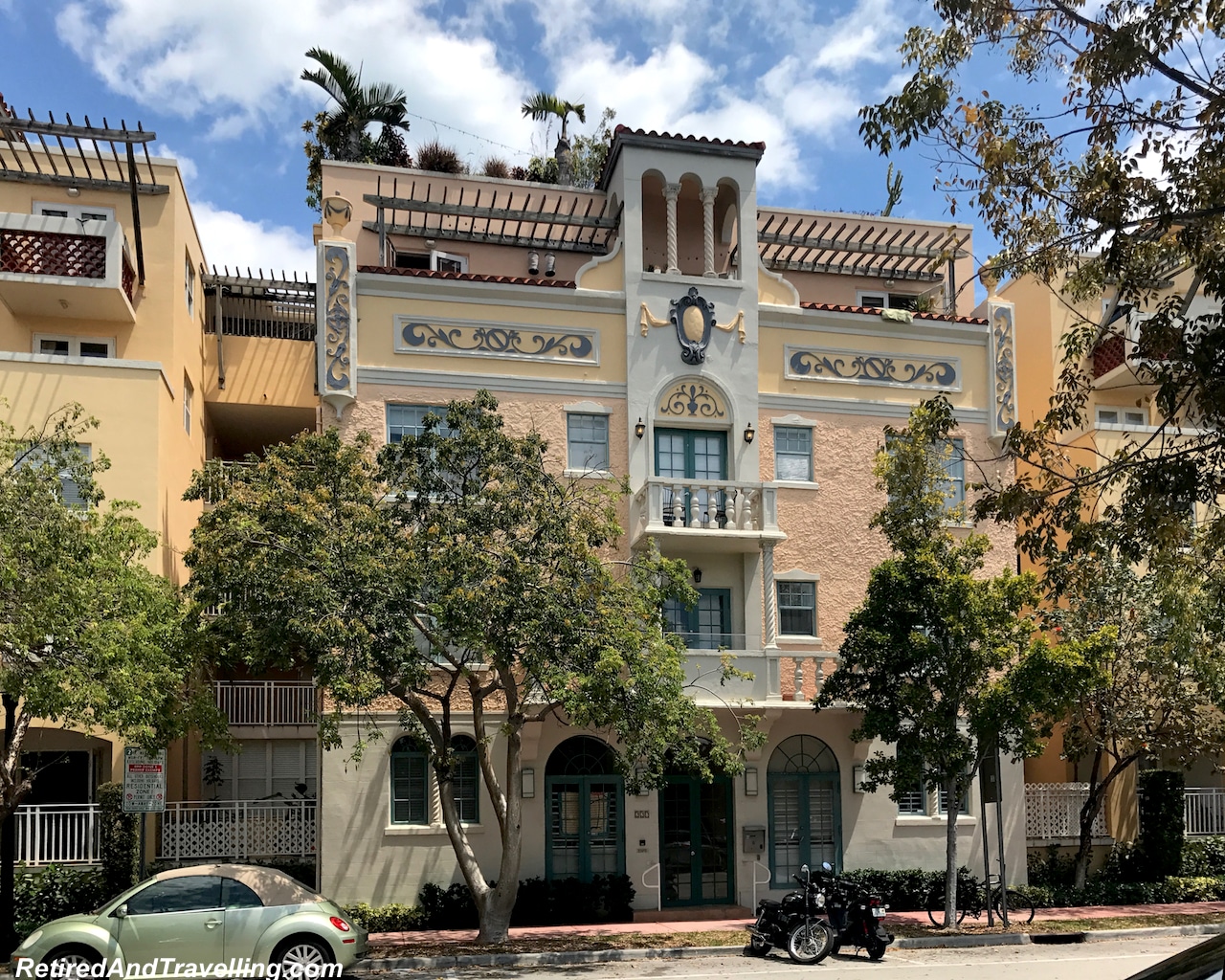 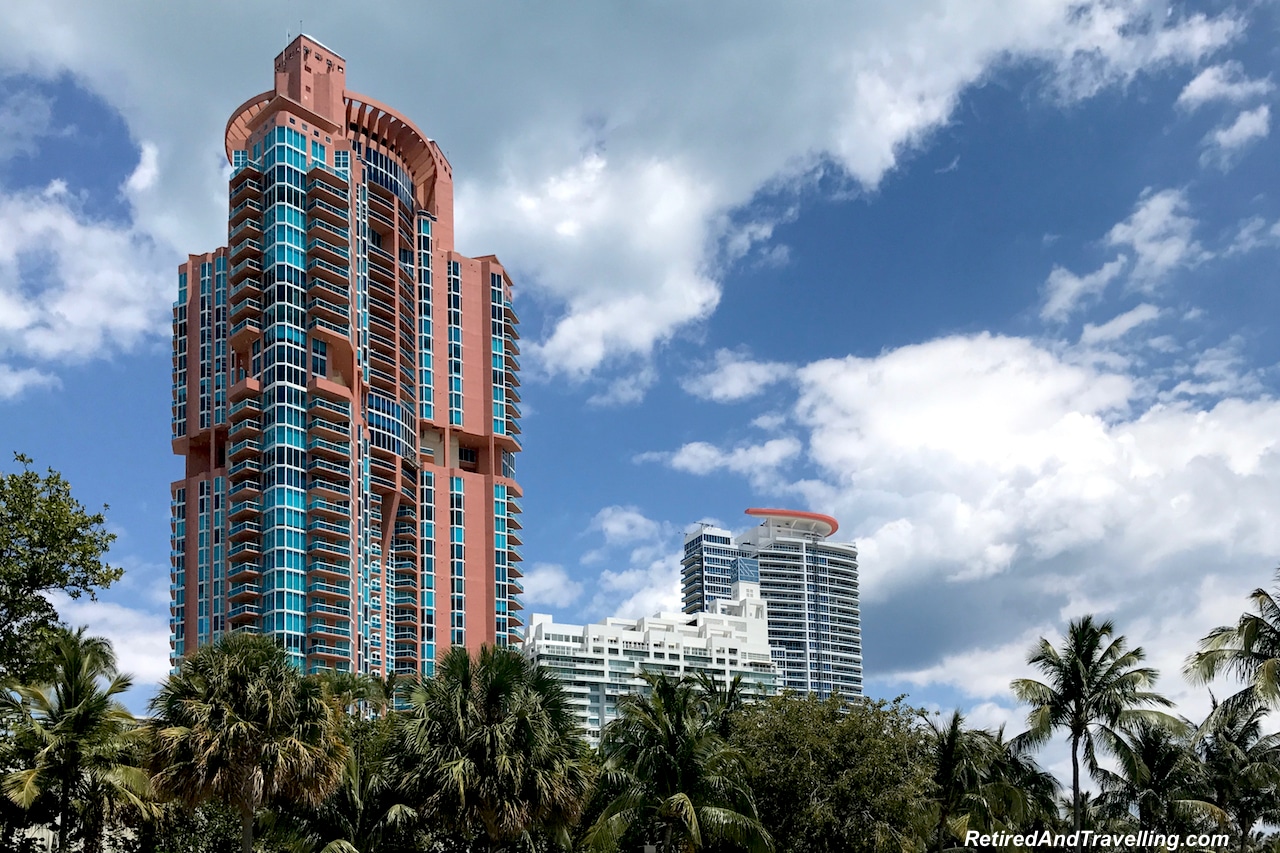 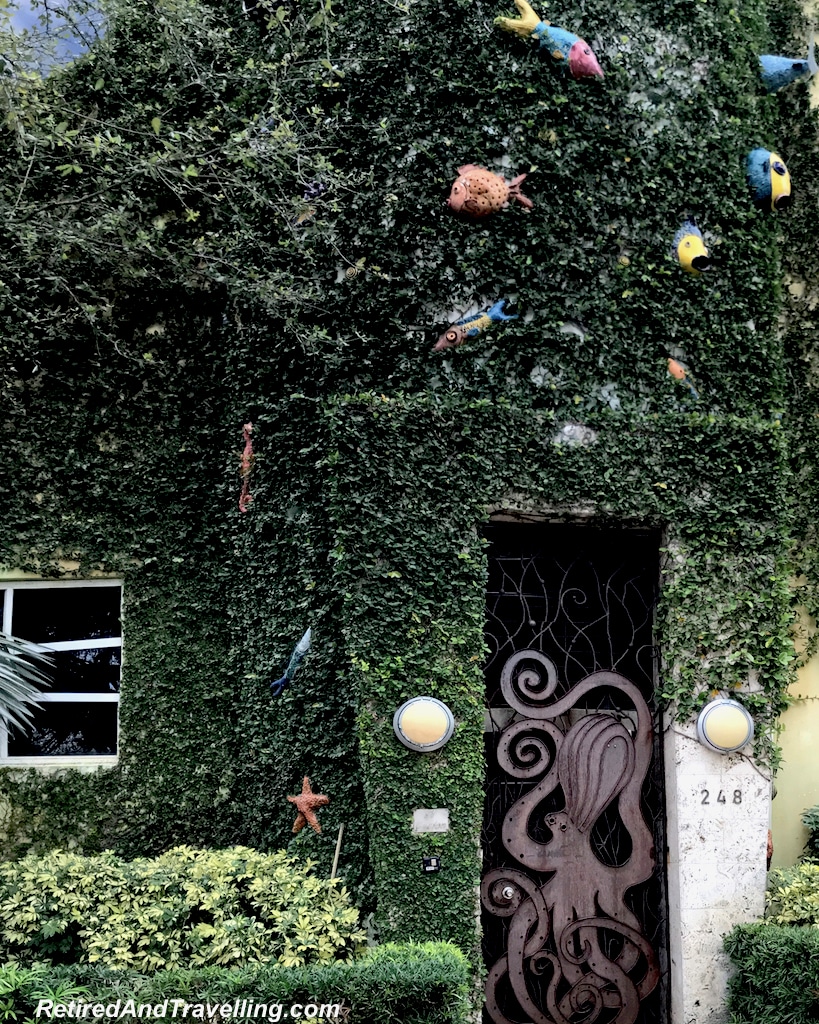 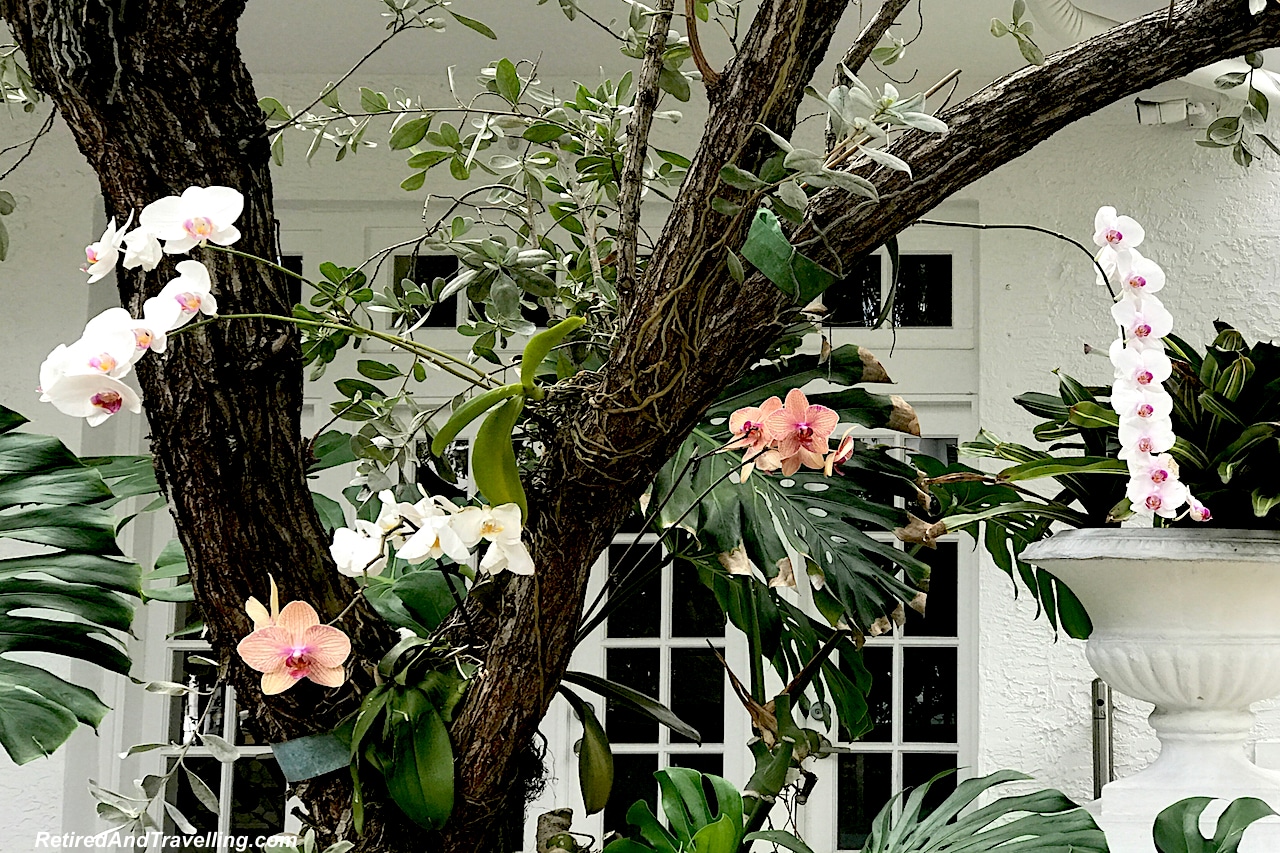 Enjoying South Beach was a great thing to do before starting a cruise in Miami.

Starting A Cruise In Miami

As the sun set over Miami, we could sip our evening cocktail and watch the sun sink below the buildings of Miami. 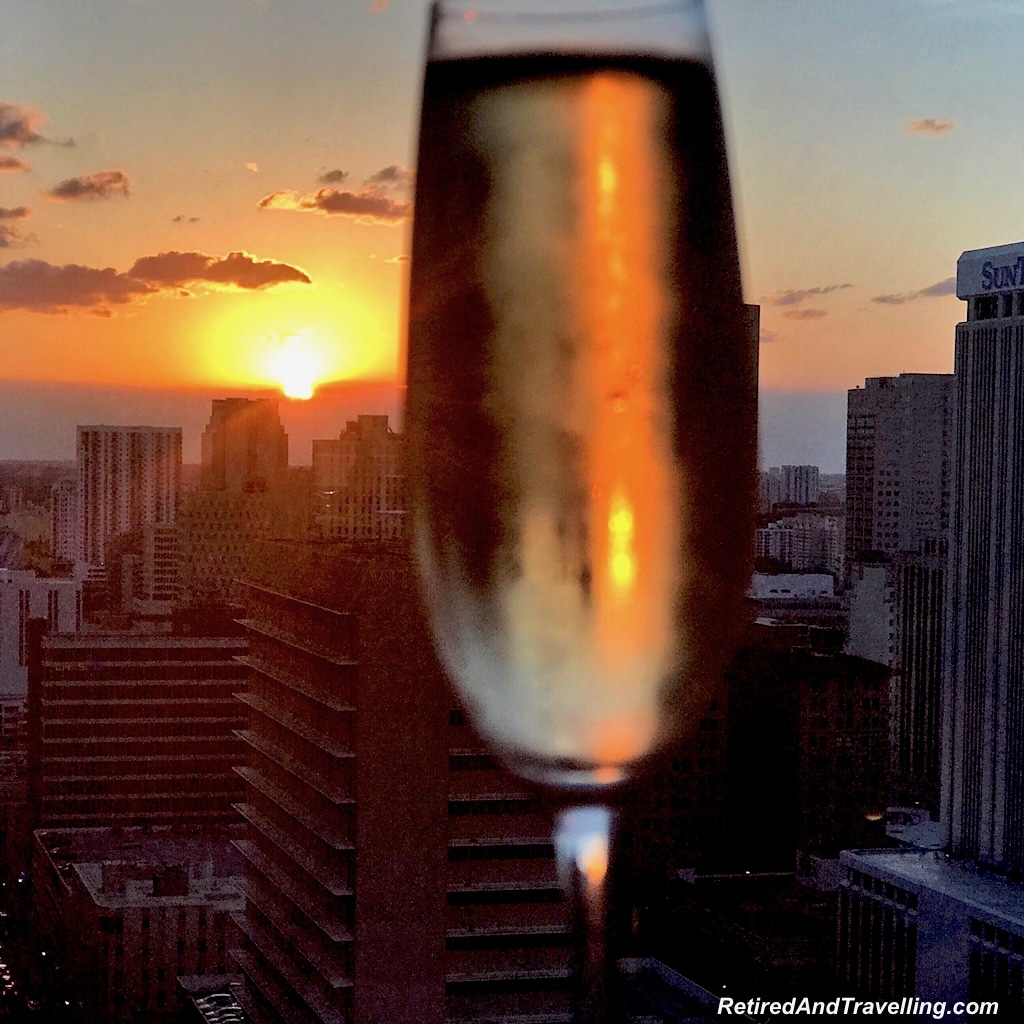 In the morning, we could look out over the harbour and watch the sun come up. Starting a cruise in Miami meant that we could watch from our room as our cruise ship came into the harbour. 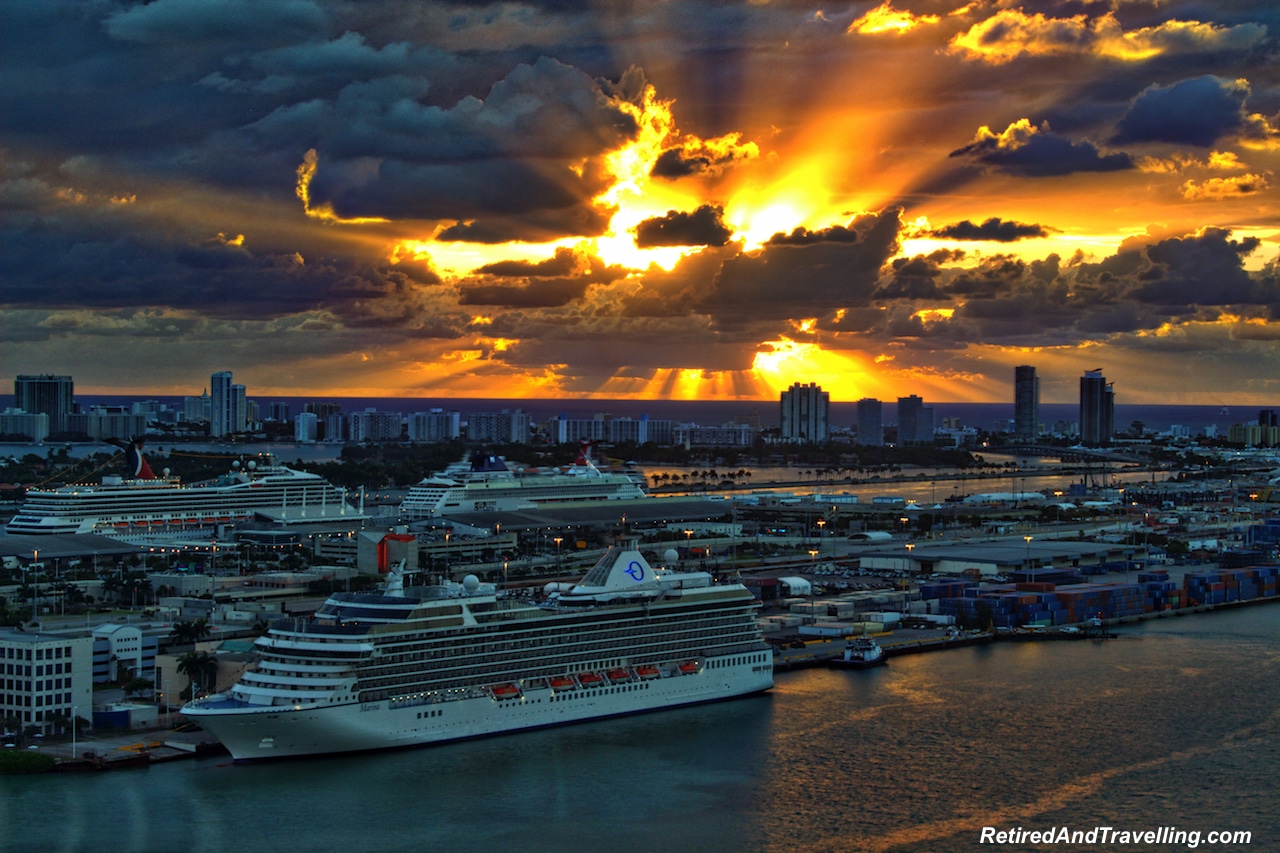 We finished the last of our travel planning while we still had high speed internet. The ship turned over the passengers and was ready for us to board by mid-day. 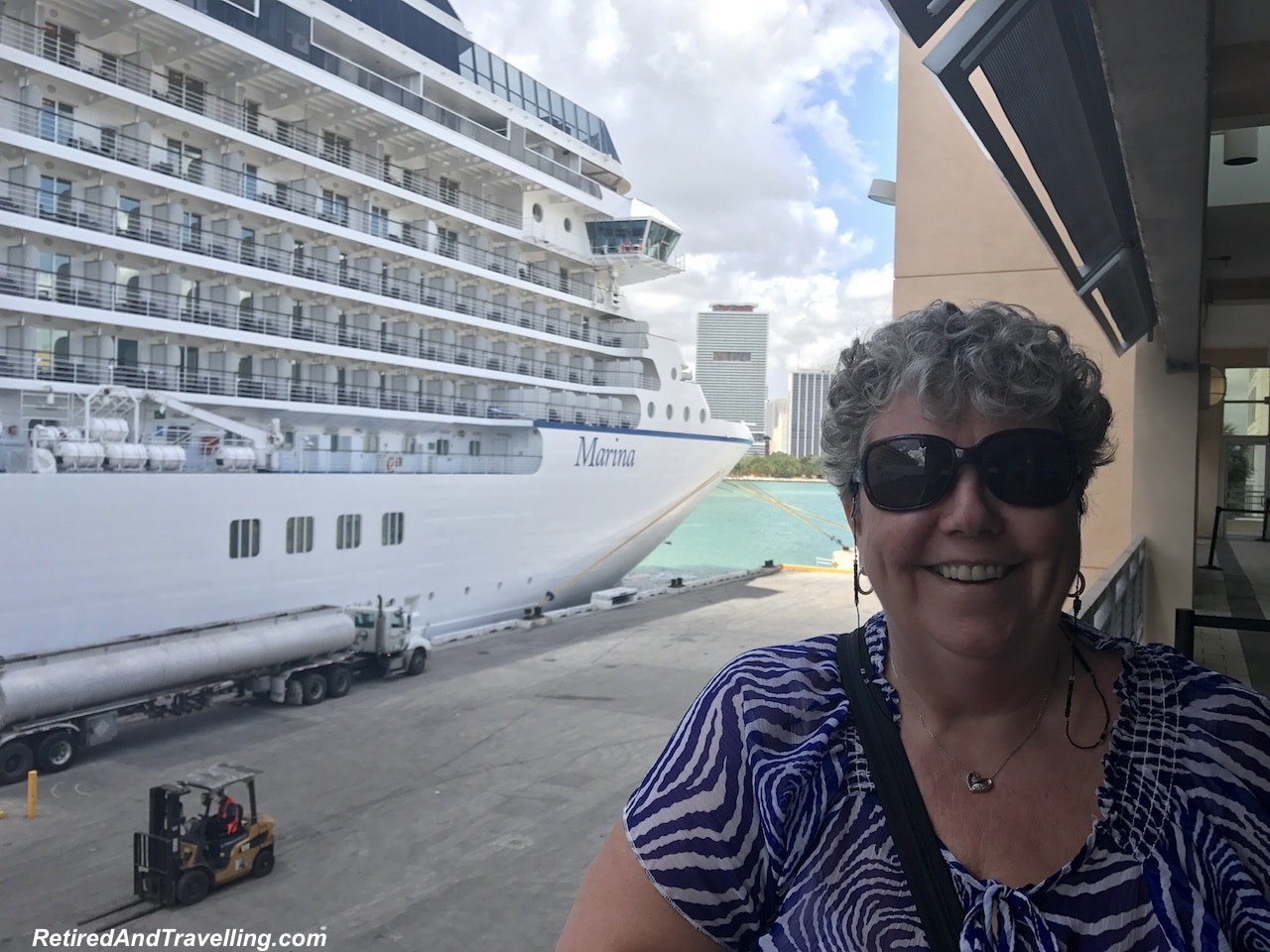 And then we were off for the next leg of our adventure. We had two days at sea to get our sea legs. Our first port was Puerto Rico. This was a return visit for us to San Juan. We were looking forward to exploring on our own.

What is your favourite thing to do when starting a cruise in Miami? 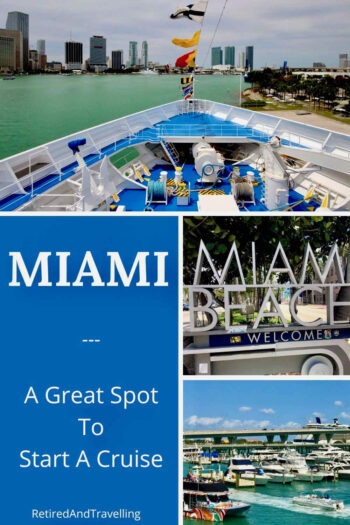 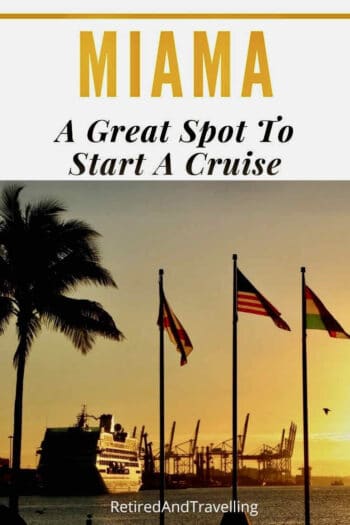