A Most Surprising Cruise Stop In Tasiilaq Greenland

The best laid plans don’t always materialize. Weather issues derailed the entire itinerary originally planned for Greenland on our Nordic cruise. Our surprise cruise stop in Tasiilaq, Greenland offered us a view of the small and charming town.

This town used to be called Ammassalik and was the most populated town on the east side of Greenland. But we were sure they did not know what hit them when our cruise ship arrived with little warning!

The cruise ship left the port of Isafjordur in Northern Iceland for Greenland. We were so surprised to find that the seas were calm and the sun shone bright. The ship seemed to have slowed down so we wondered what was up. But we enjoyed the sunshine and flat waters well north of the Arctic Circle. 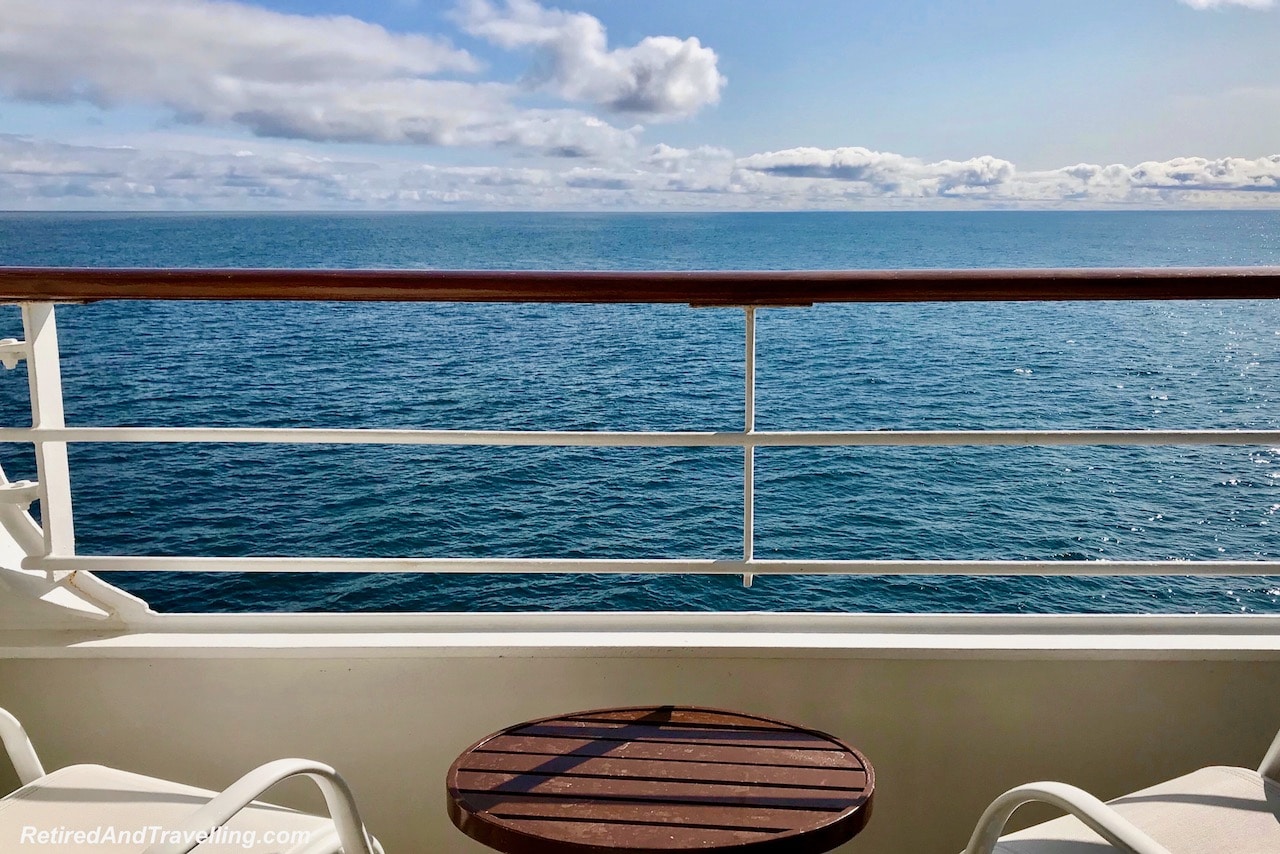 We soon learned why we were loitering in place. When the Captain did his update we got a surprise. Bad storms developed around the south end of Greenland. These high seas made it hard for the radar to detect icebergs. And after much discussion, Oceania Cruises decided to change our Greenland plans.

On the original plan, we cruised through the fjord at the south end of Greenland. And then went up the west side of Greenland for stops in Paamiut and Qaqortoq. Instead we sat and wallowed at sea for a day, so slow we almost bobbed like a cork. And then headed for a cruise stop in Tasiilaq on the East coast of Greenland.

Changes in cruise itineraries are subject to the vagaries of nature and sometimes politics. Our cruise ports around Cuba at Christmas one year were entirely changed when we reversed direction to avoid a major storm. We missed the chance to see the pyramids in Egypt when the ship could not get insurance to land in Cairo. Luckily we spent two great days in Luxor and saw some great Egyptian sights. This would not be the last time our cruise itineraries would change.

The one upside of the change in plans was that we got three full days in Reykjavik, Iceland. Not a bad consolation prize on a cruise through the Nordic countries.

We Sailed Into Greenland In The Fog 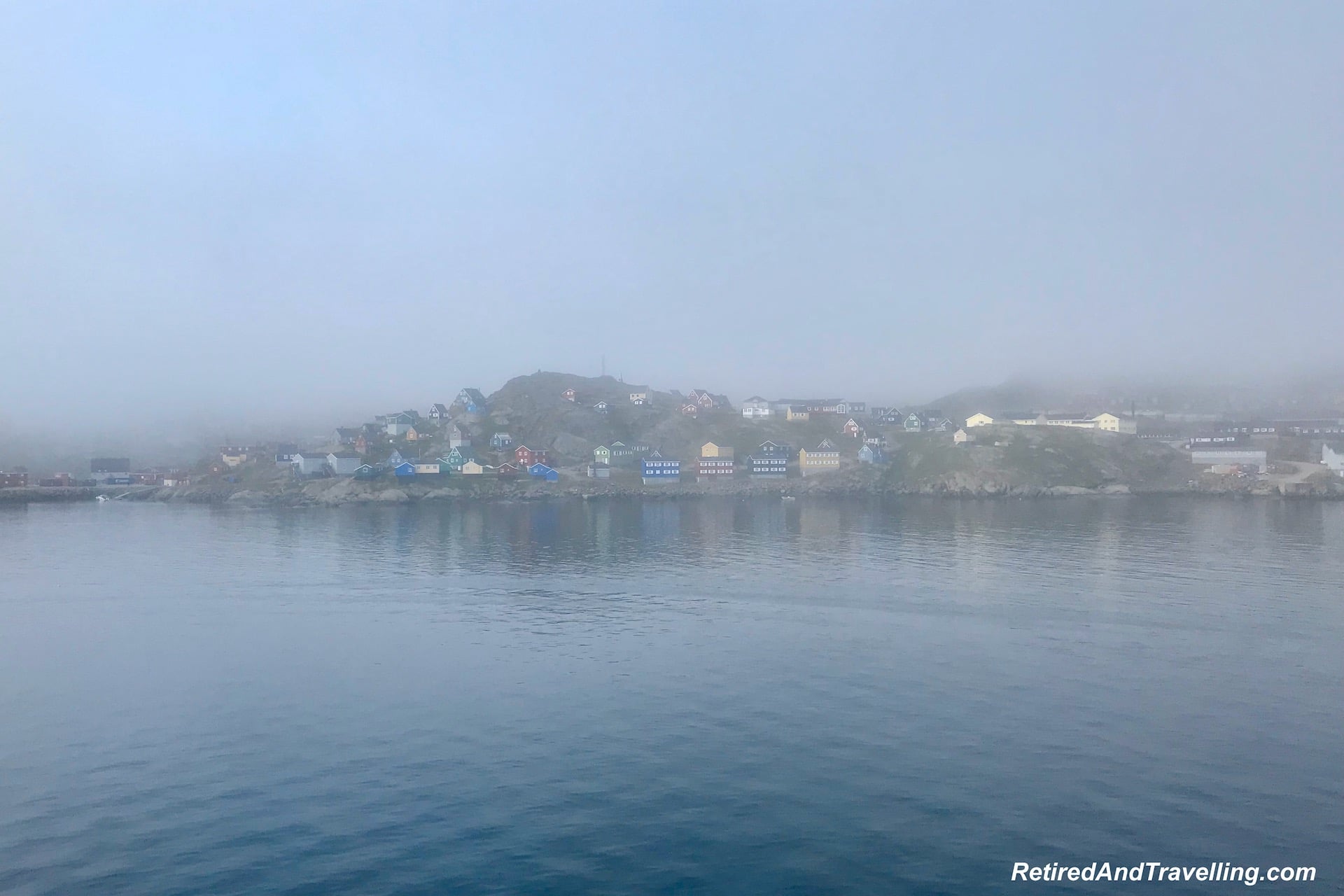 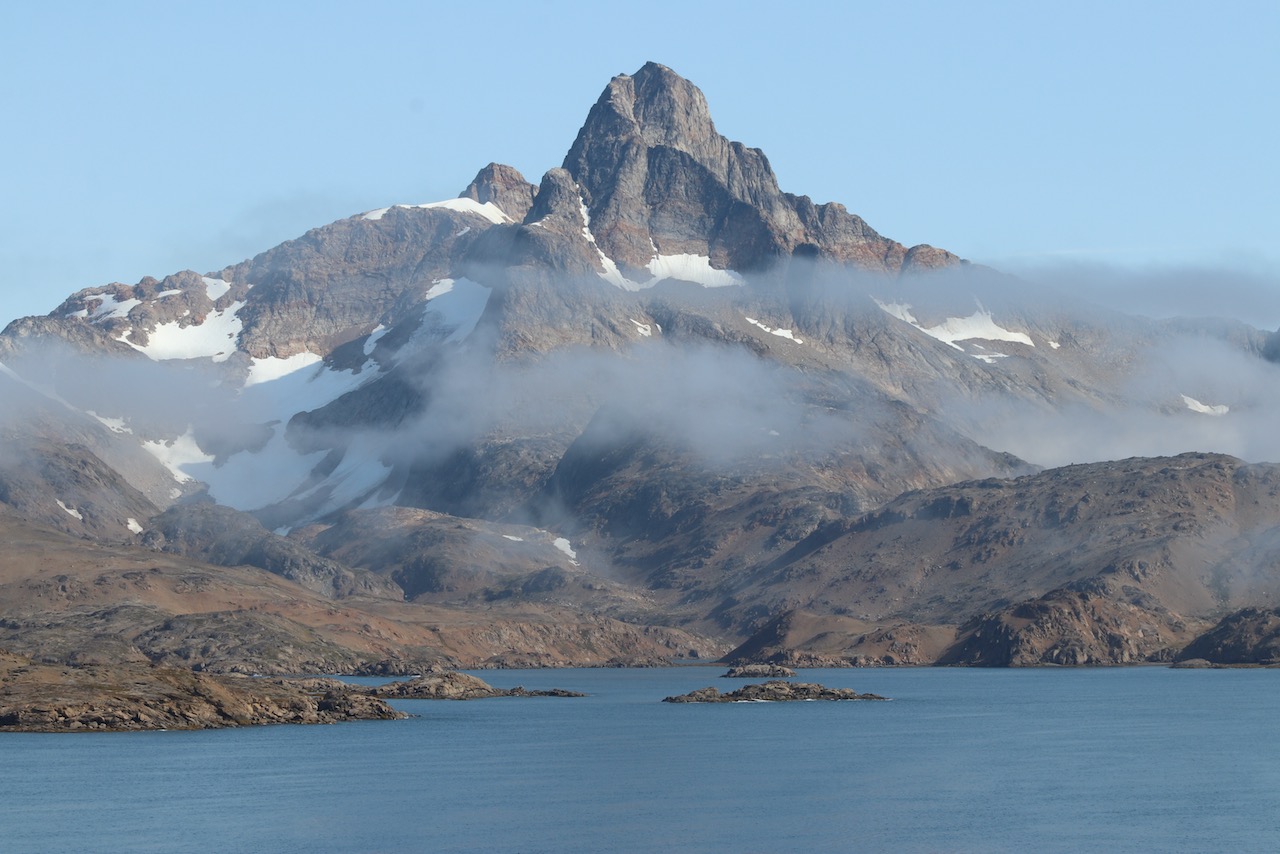 On our cruise to Alaska, we had our first close encounter with icebergs. But Greenland was the first real icebergs we saw on this cruise through the Nordic countries. Much like clouds, we were amused to look for shapes in the ice. I was pretty sure that one of the icebergs was shaped like a perfect seahorse. Or maybe a camel? And the other iceberg reminded us of the Merlions in Singapore. What do you see? 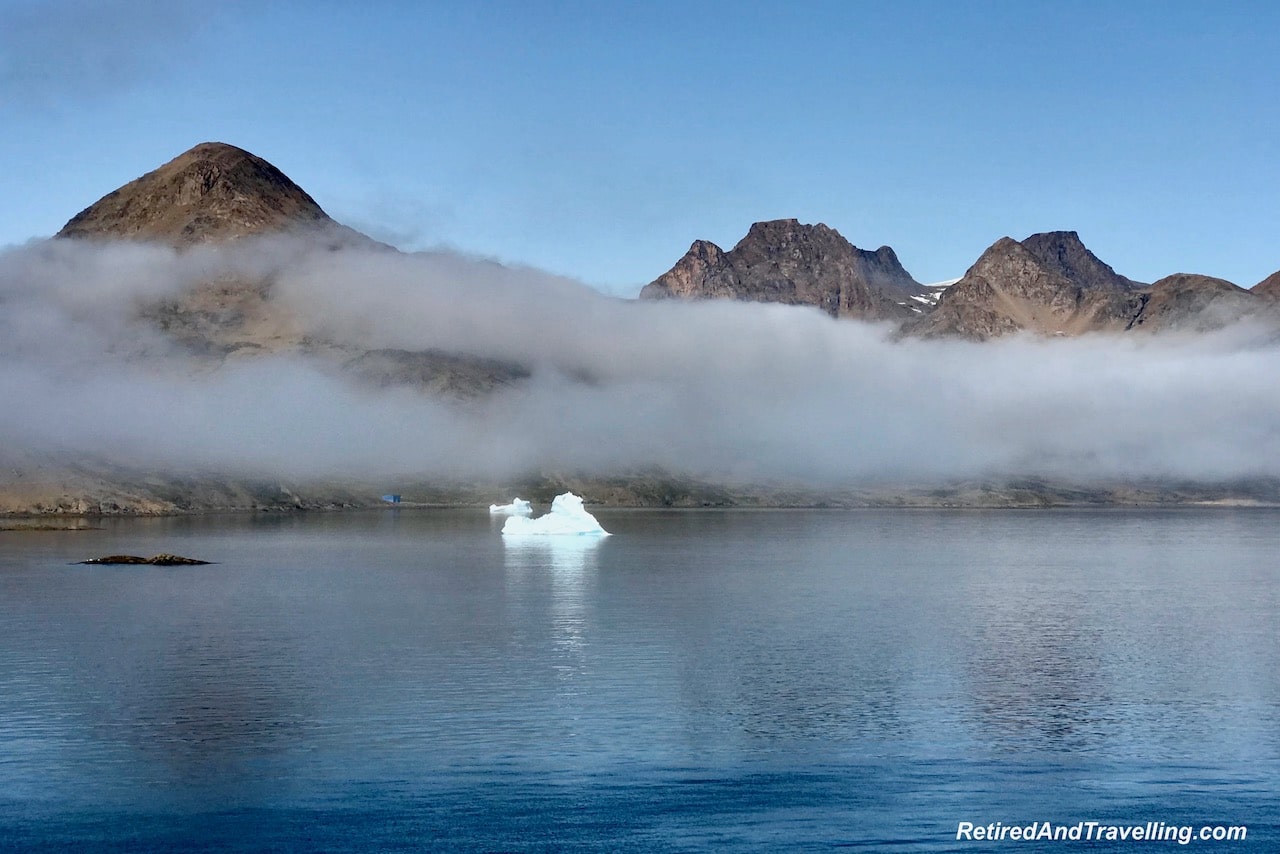 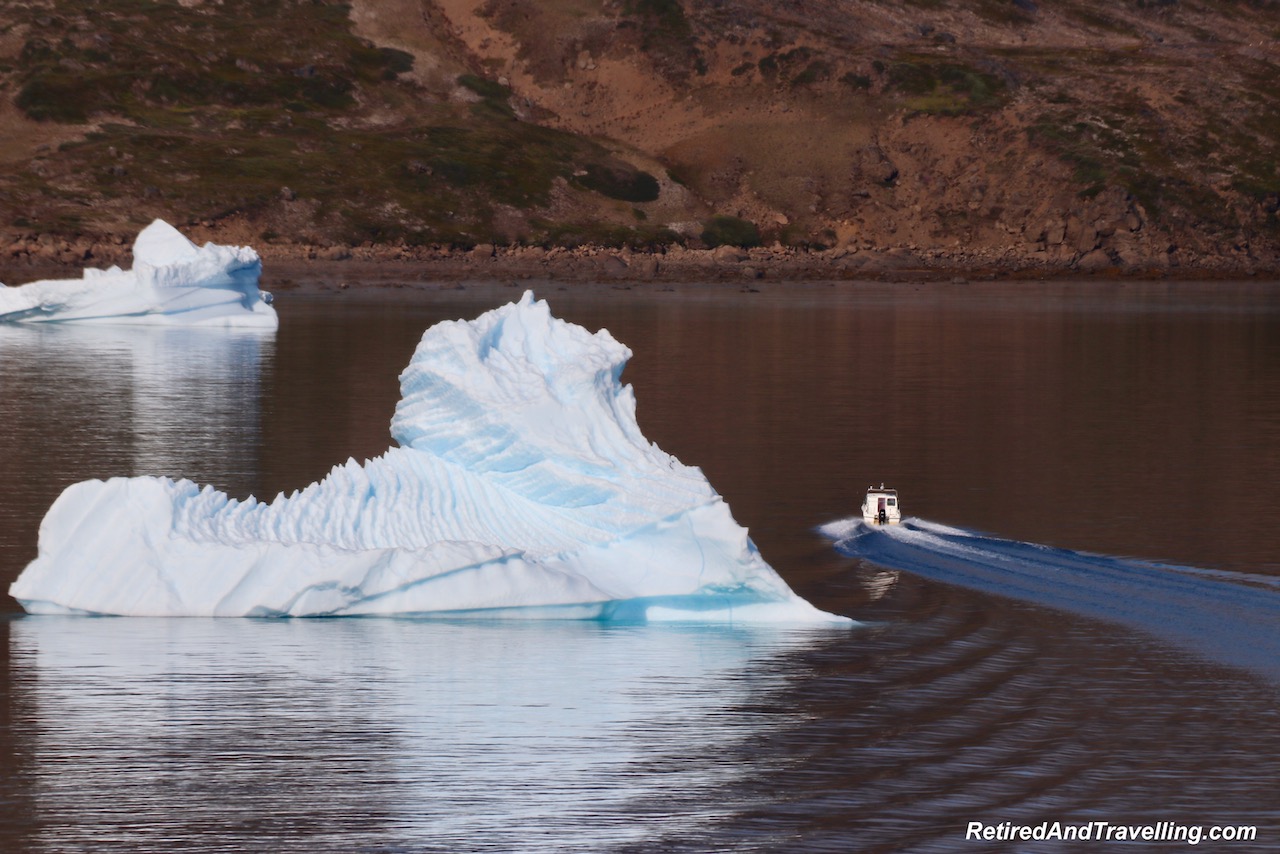 Tasiilaq was far too small a town for our cruise ship to dock. So we anchored in the bay. The tender boats went in while the fog was still thick to get things prepared for us before we descended on this very small town. Oceania Cruises did a good job of scrambling to get us a spot to visit in Greenland when our other cruise ports were cancelled. But I was not sure if another cruise ship had ever landed in this town. 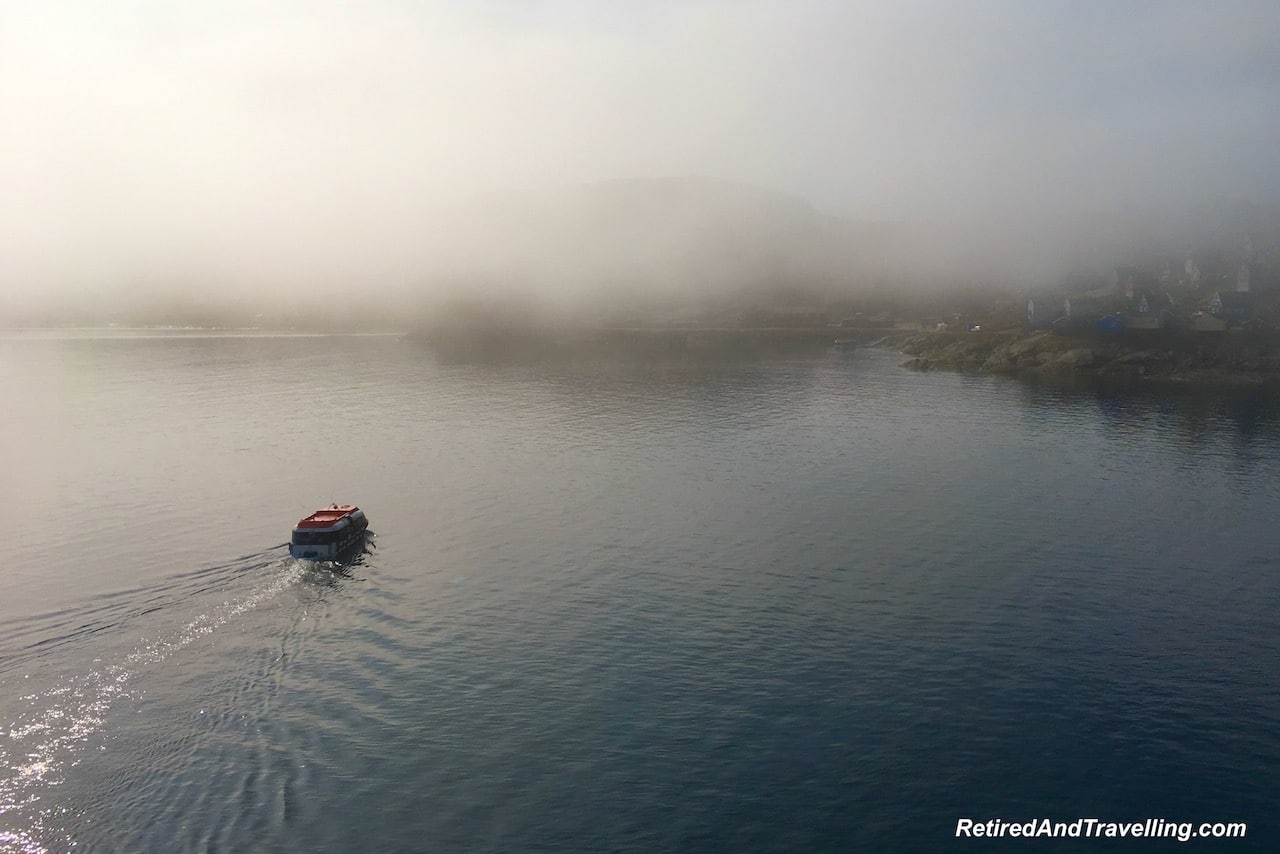 We were not the only ones surprised by a cruise stop in Tasiilaq Greenland!

The Colourful Port Town Of Tasiilaq

There were no formal cruise excursions available in Tasiilaq. So we took our time and waited for the tender boats to become less full before we headed into town. As we approached the shore, we got a close up view of the colourful port town. 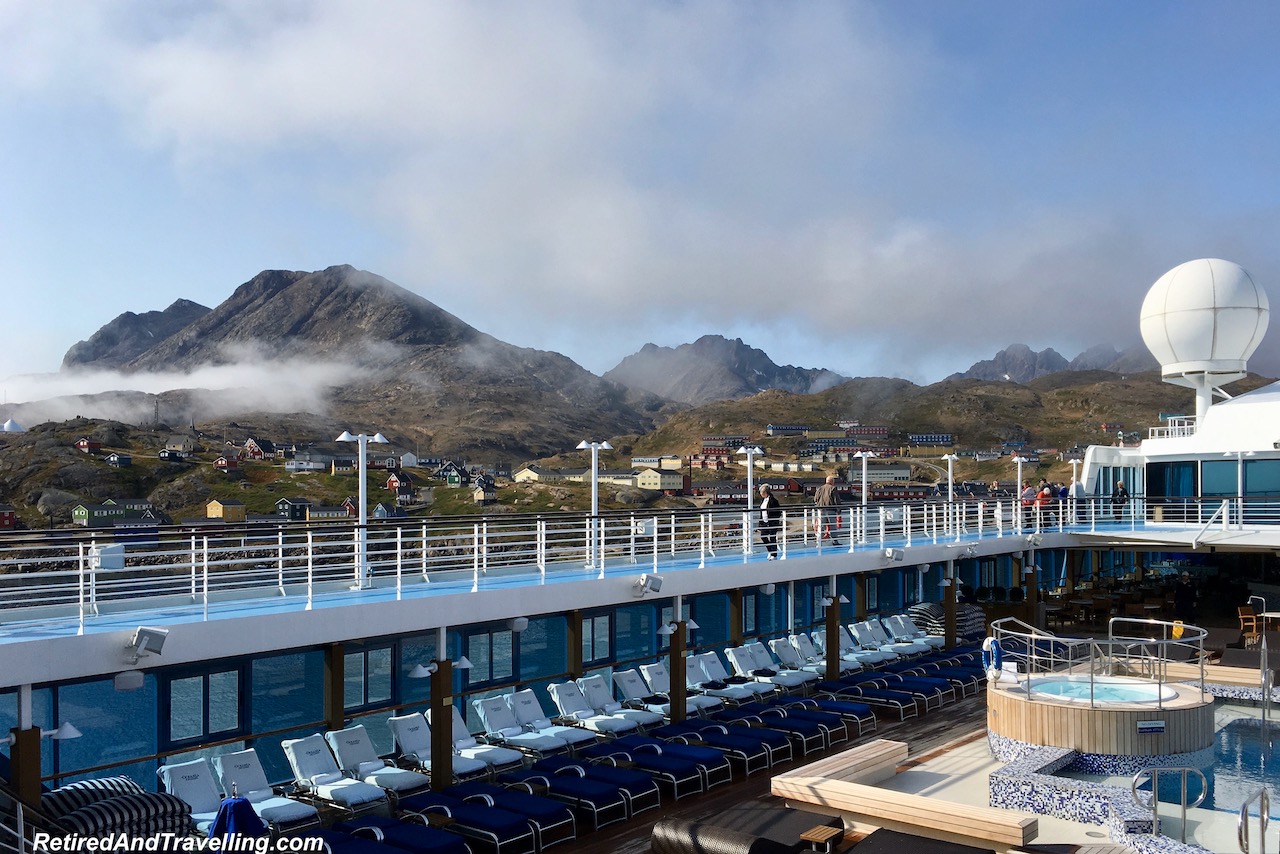 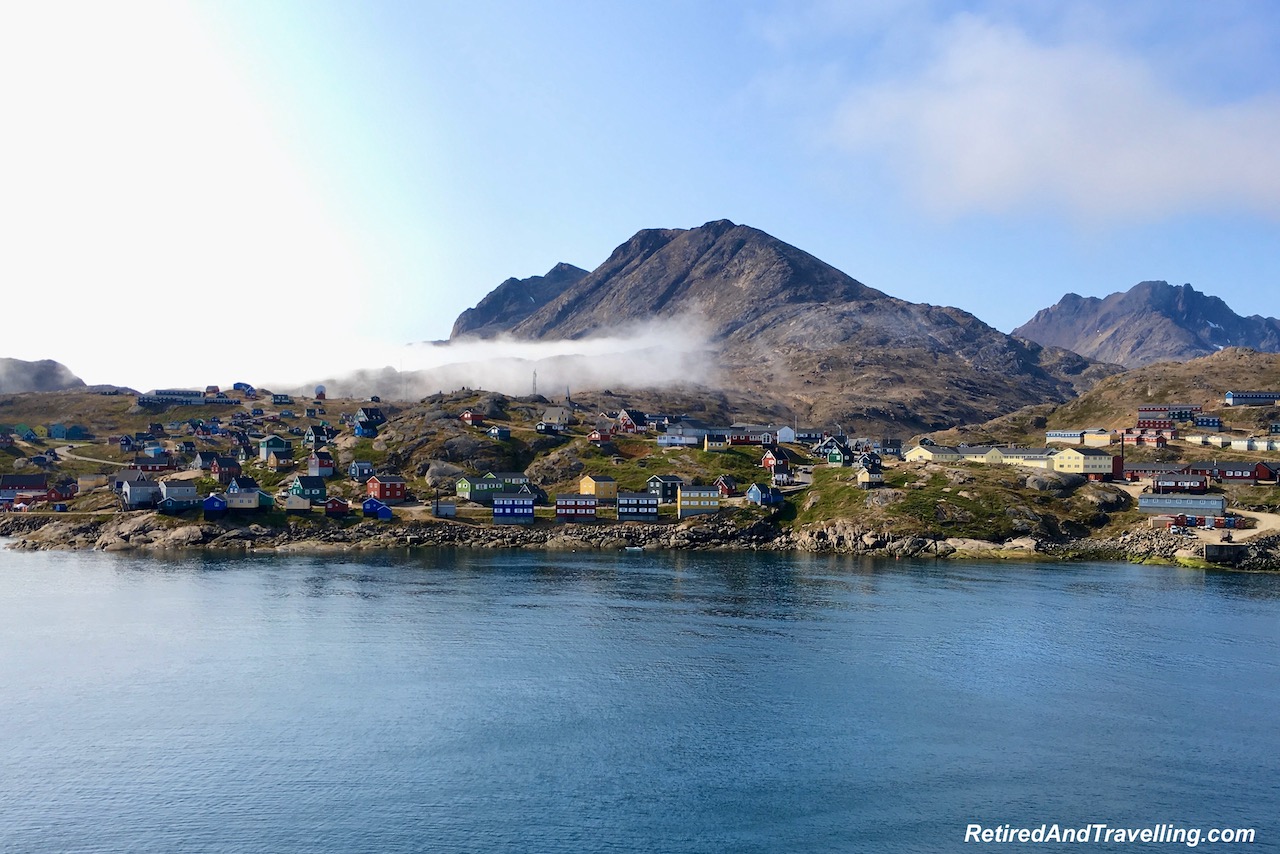 We headed off up the hills and explored this lovely small town. The colourful houses were everywhere as we walked up and up. We saw yards littered with both traditional wooden sleds and snowmobiles. Fish dried on lines at many houses. 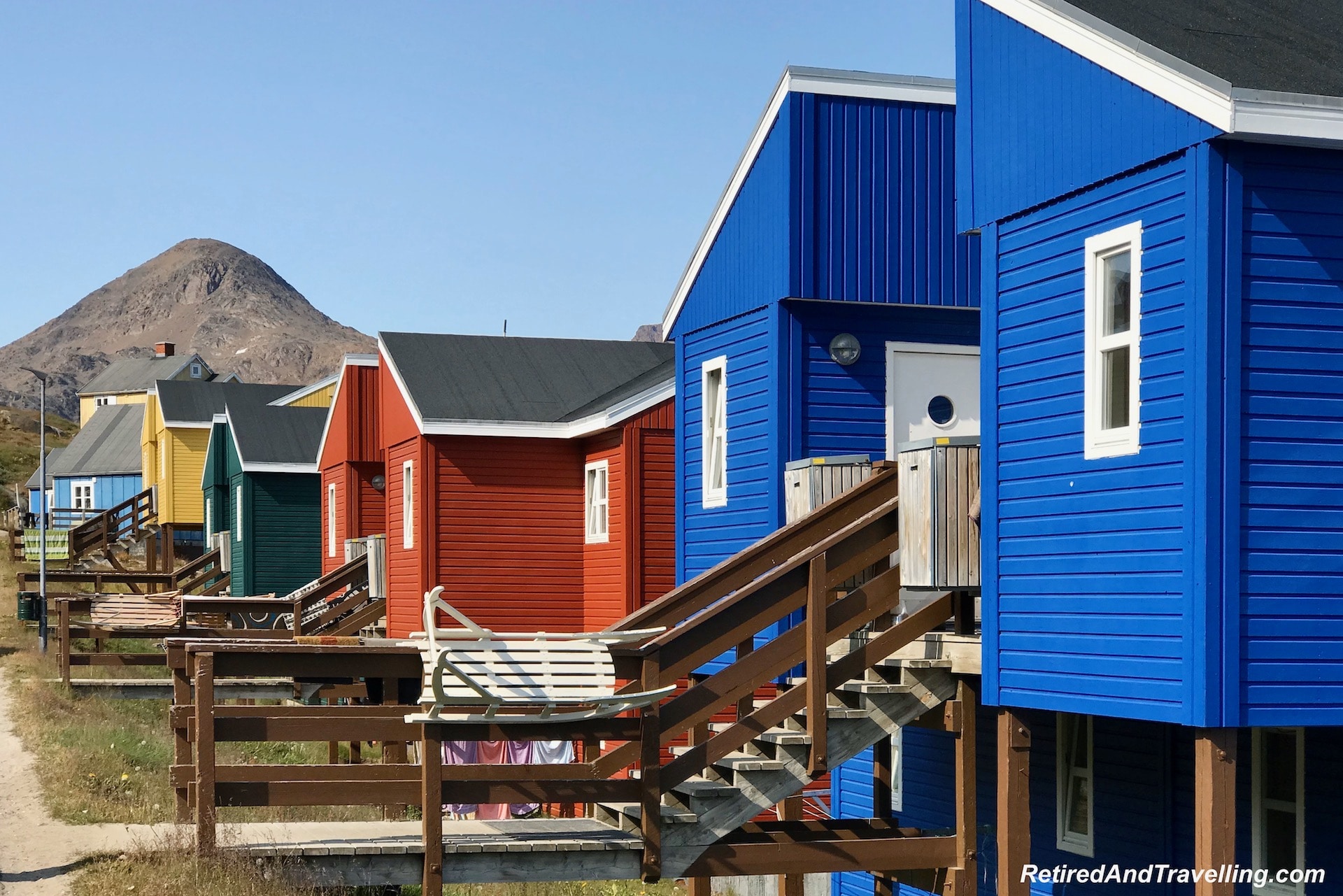 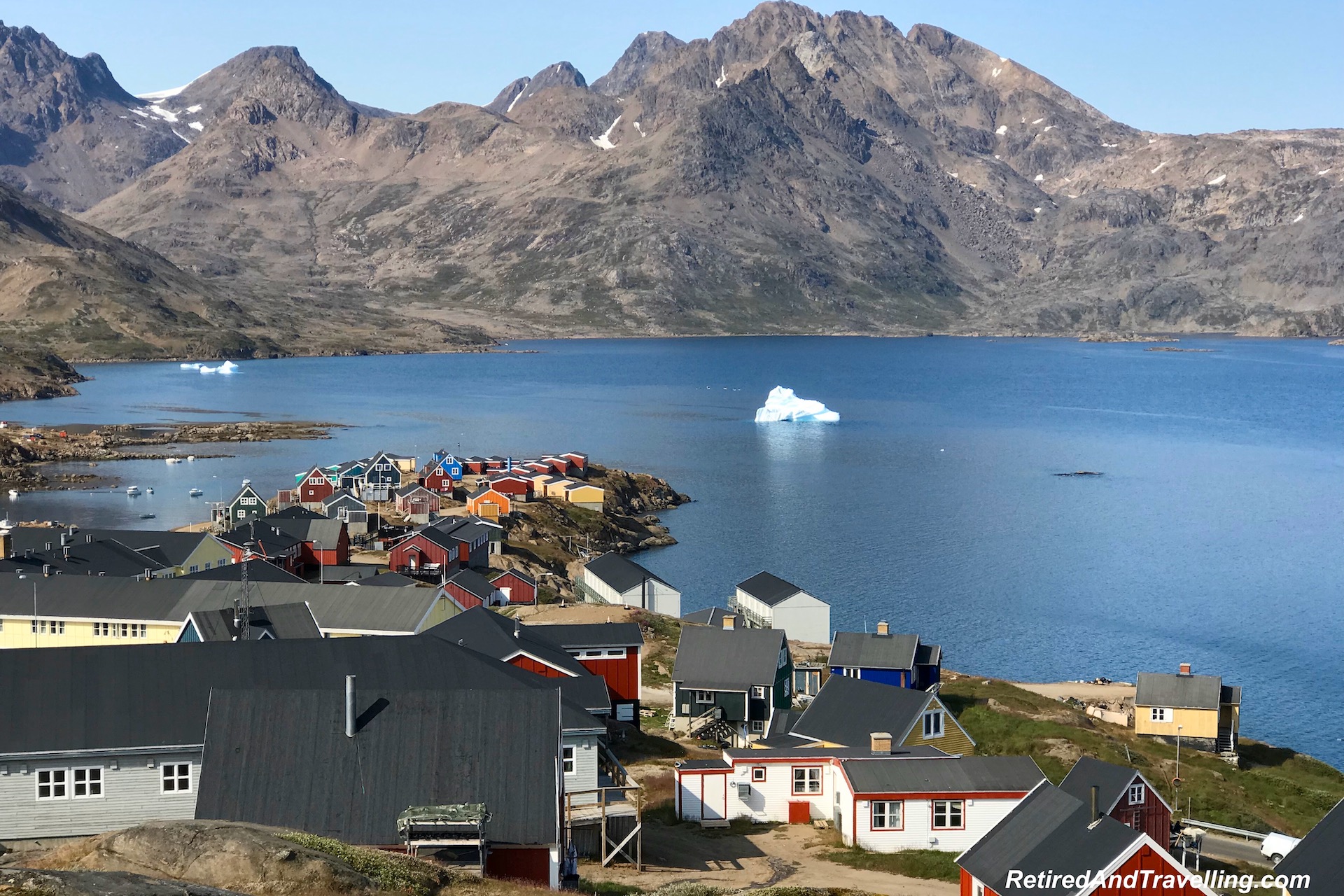 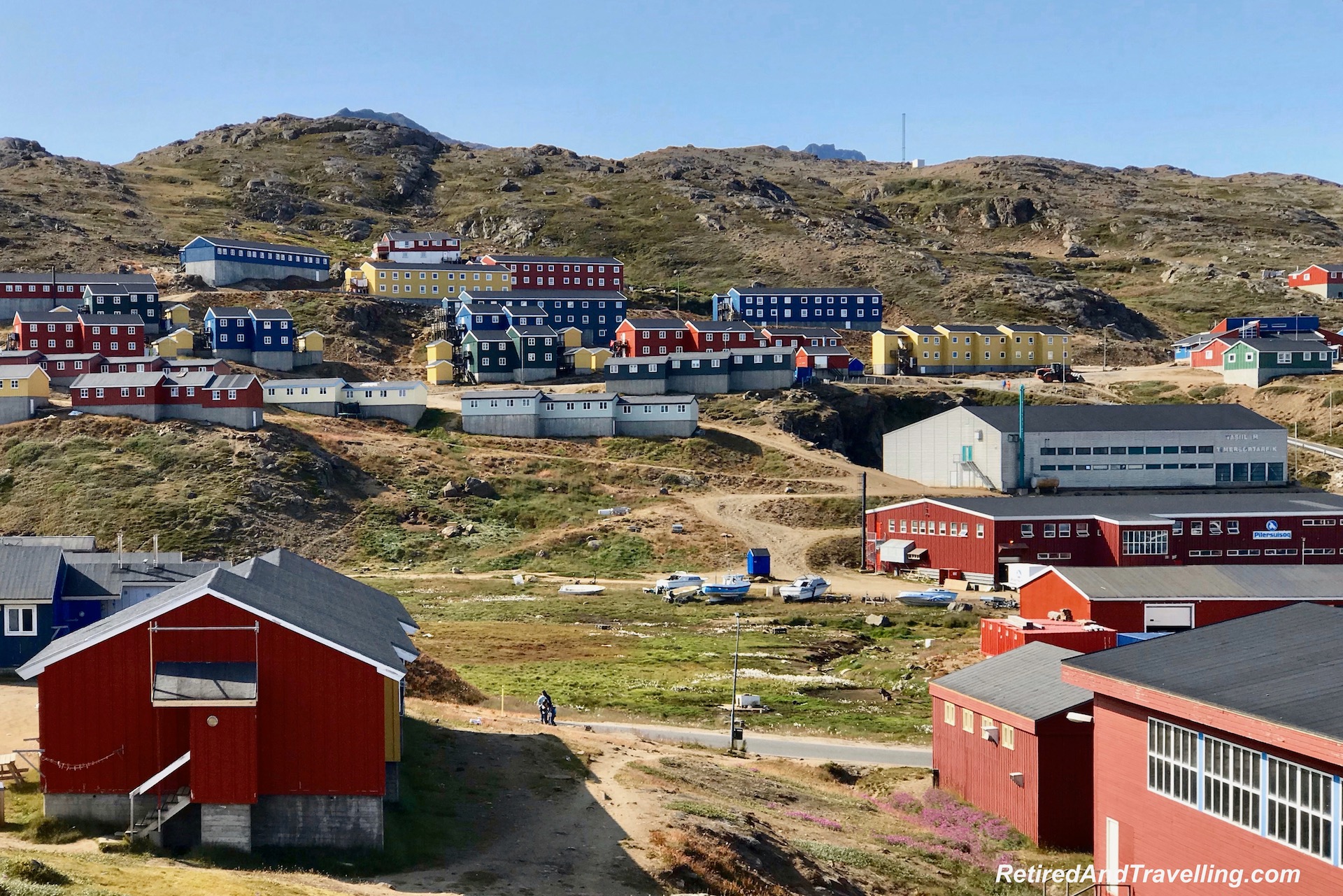 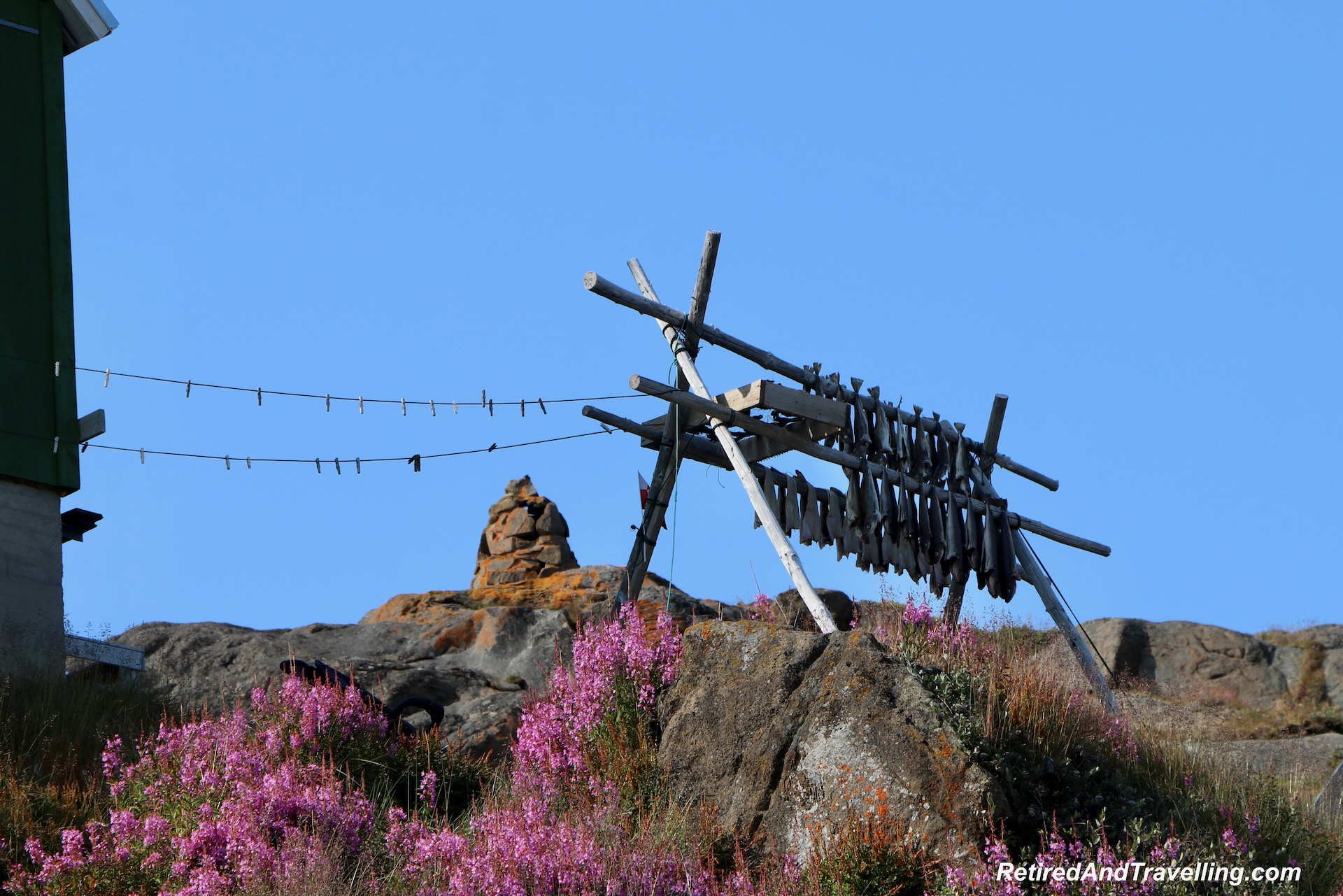 When we reached the top of the hill, we looked out over our Nautica cruise ship in port. The mountains were a beautiful backdrop to this scene. 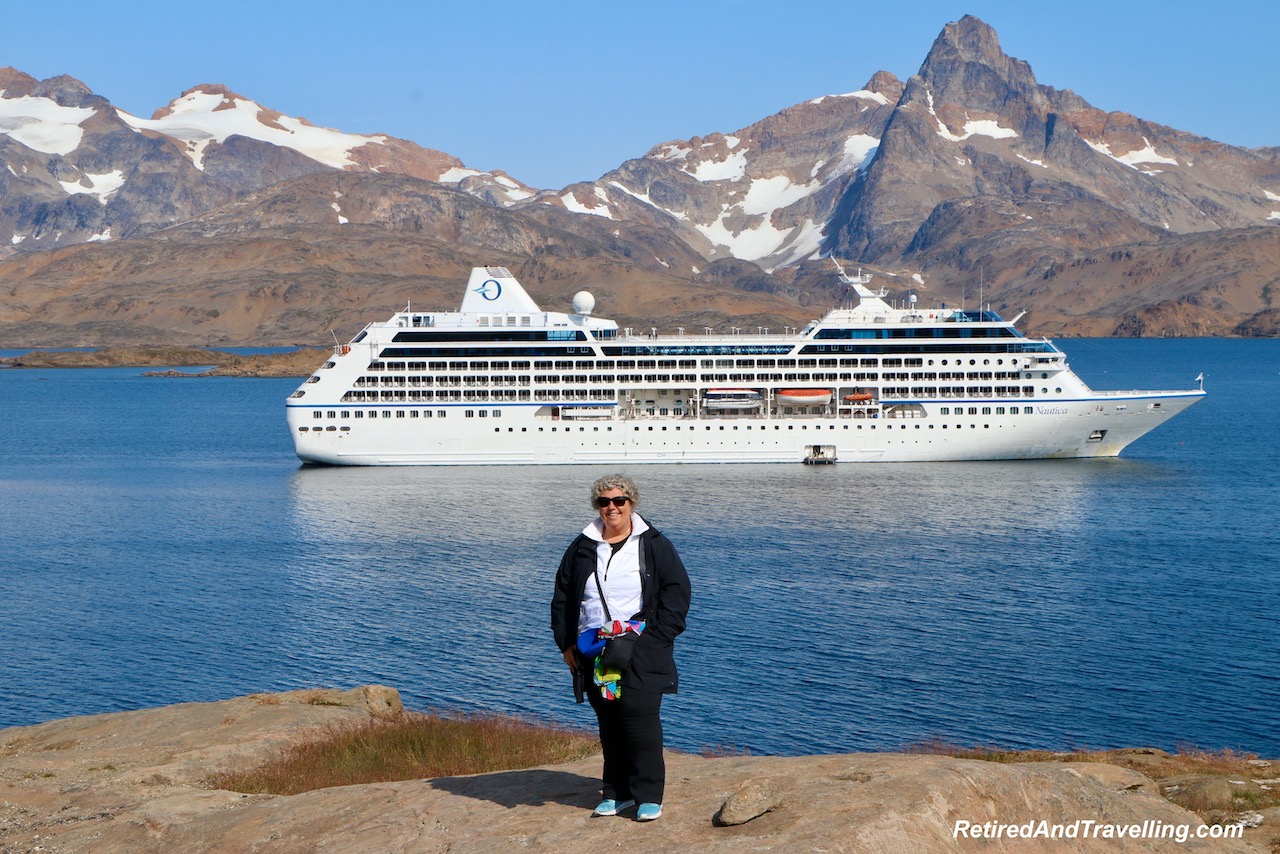 We smiled at locals that passed us by. We were sure they had no idea why 600 passengers plus crew suddenly wandered in town. But we were delighted with our first view of this surprise cruise stop in Tasiilaq.

Climbing For A Panoramic View Above Town

We climbed the hills towards the small church in town. Beside the church we saw a large rock. And people climbing up to the top for a panoramic view. 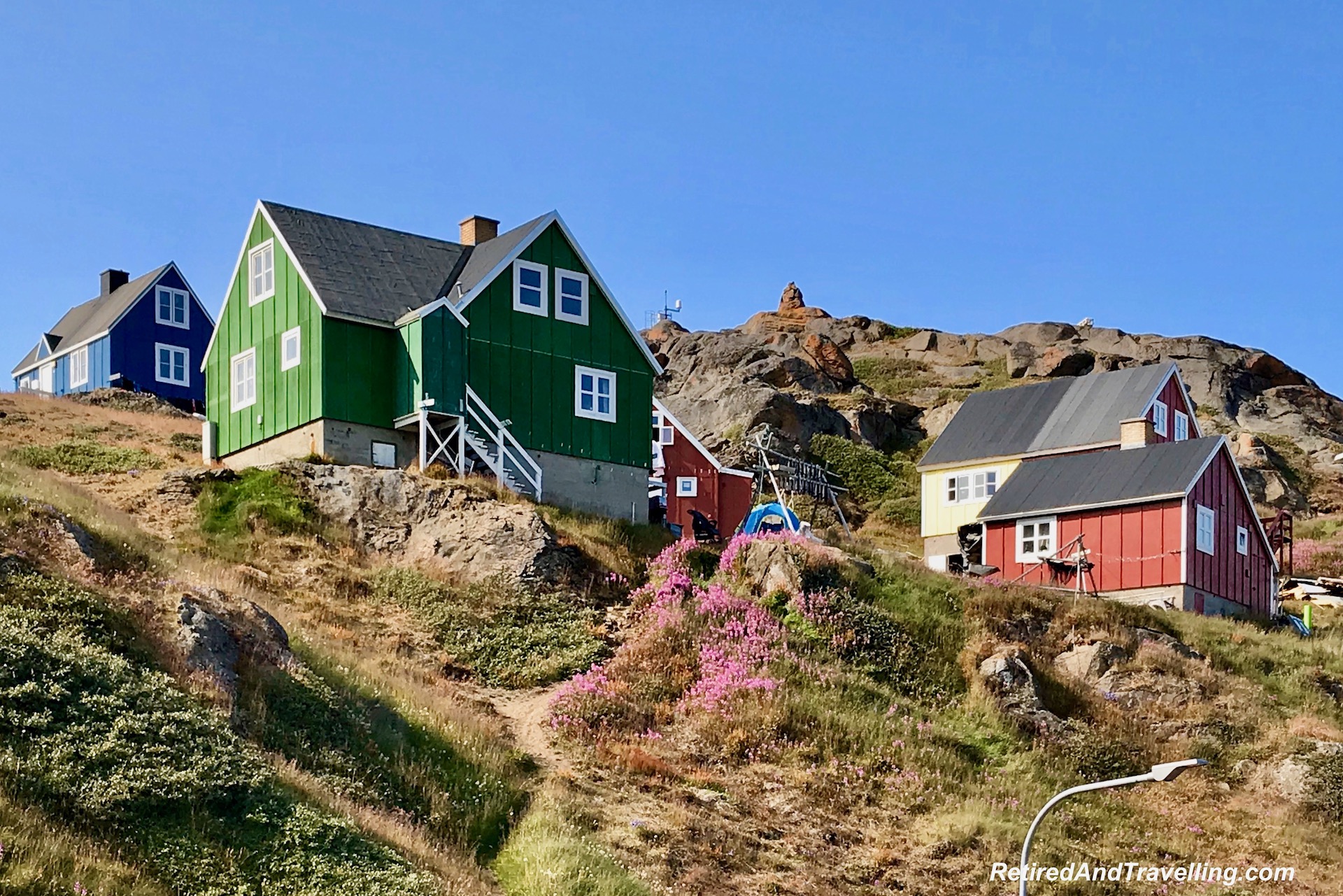 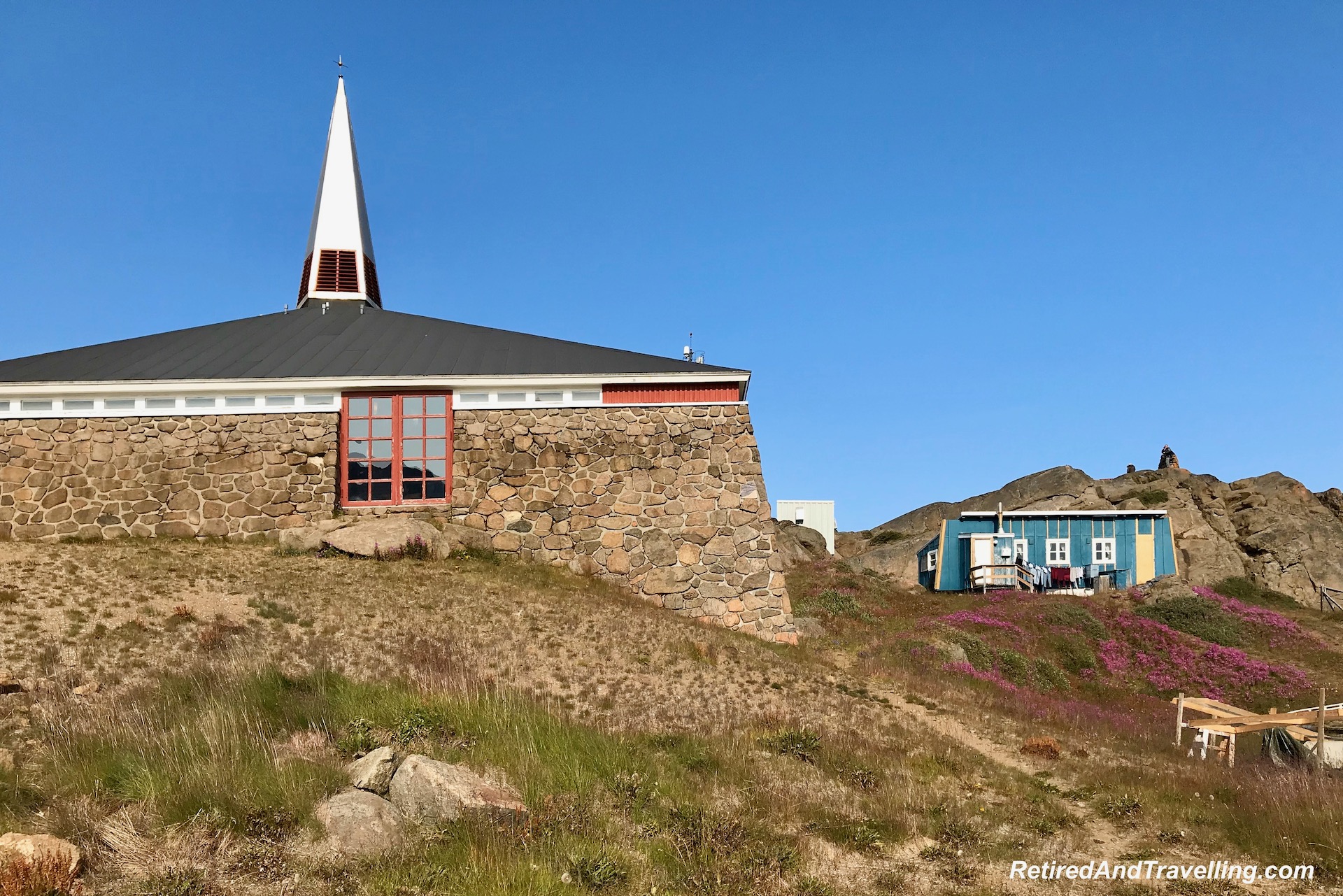 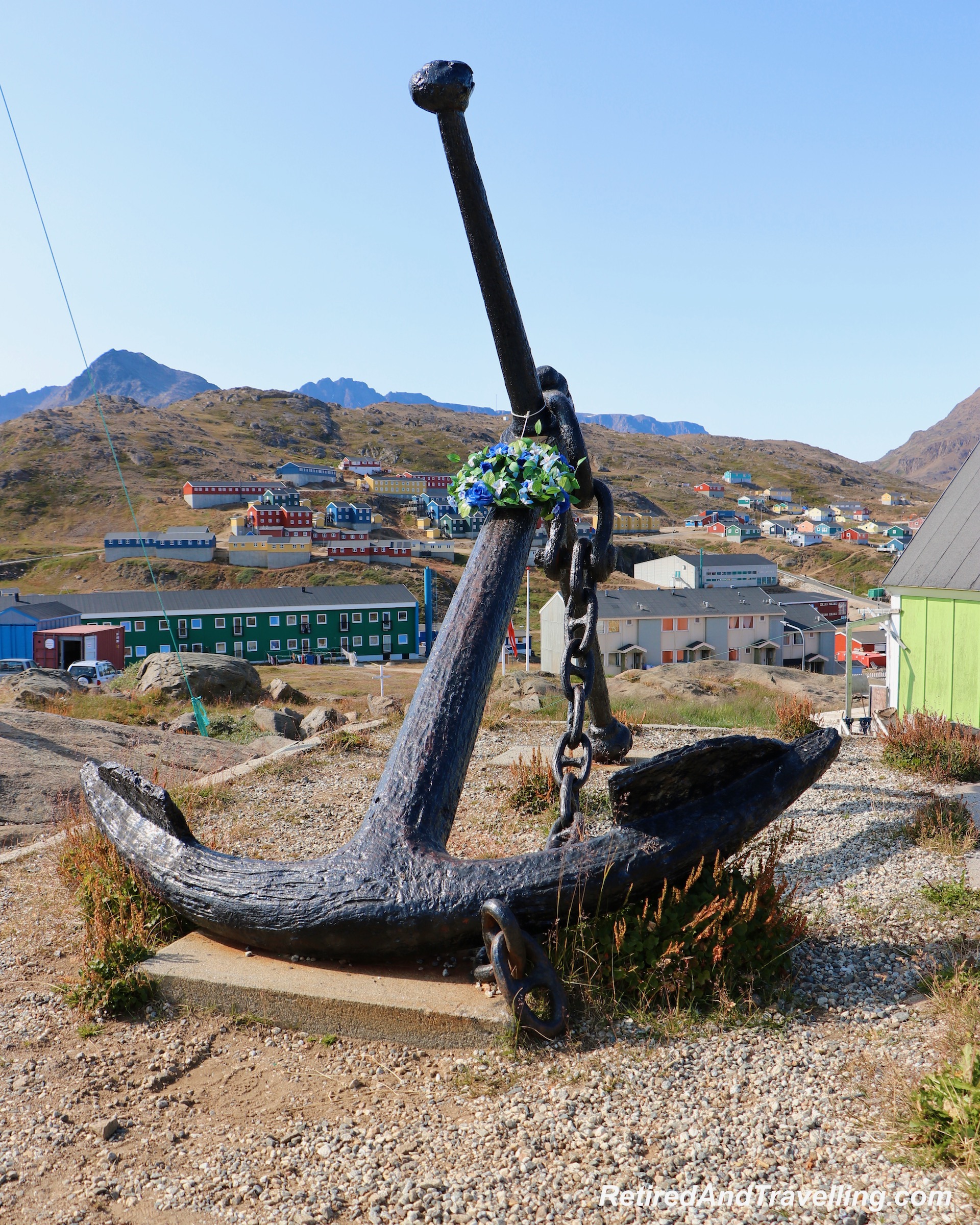 David quickly scrambled up the rock. But I was a bit more hesitant and scouted out the easiest way up. I was not going to miss this viewpoint. 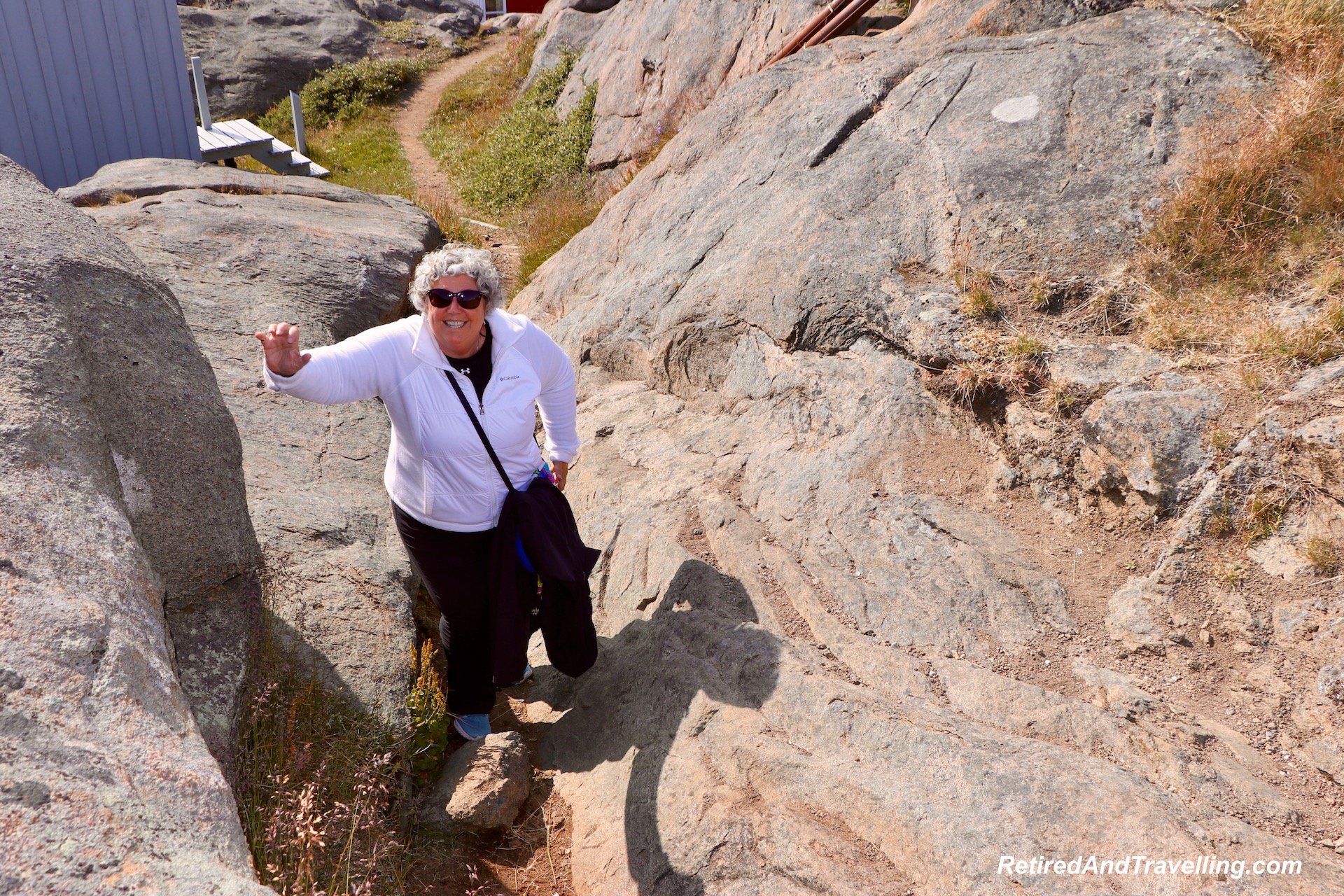 At the top, there was a bench and a rock cairn. People wandered from side to side and enjoyed the views. There was a great view of the whole town from this point. 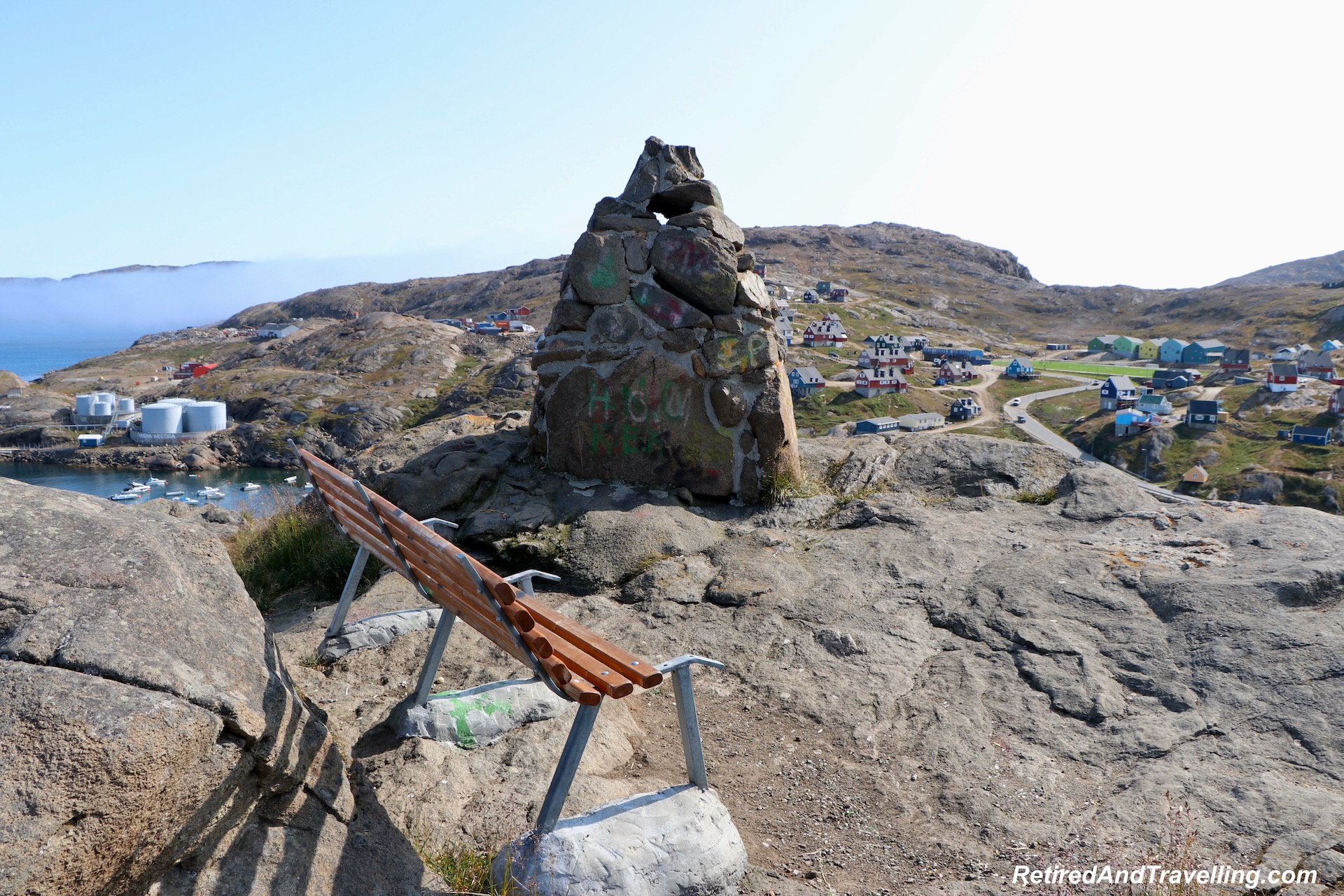 It was definitely worth the climb to get such an amazing view of Tasiilaq.

Stopping In Spots Around Tasiilaq

Before we headed down the hill, we went inside the church. It was a simple interior. But we were interested to find a boat hanging from the ceiling. We first encountered this tribute to the fishing industry when we visited the Faroe Islands. 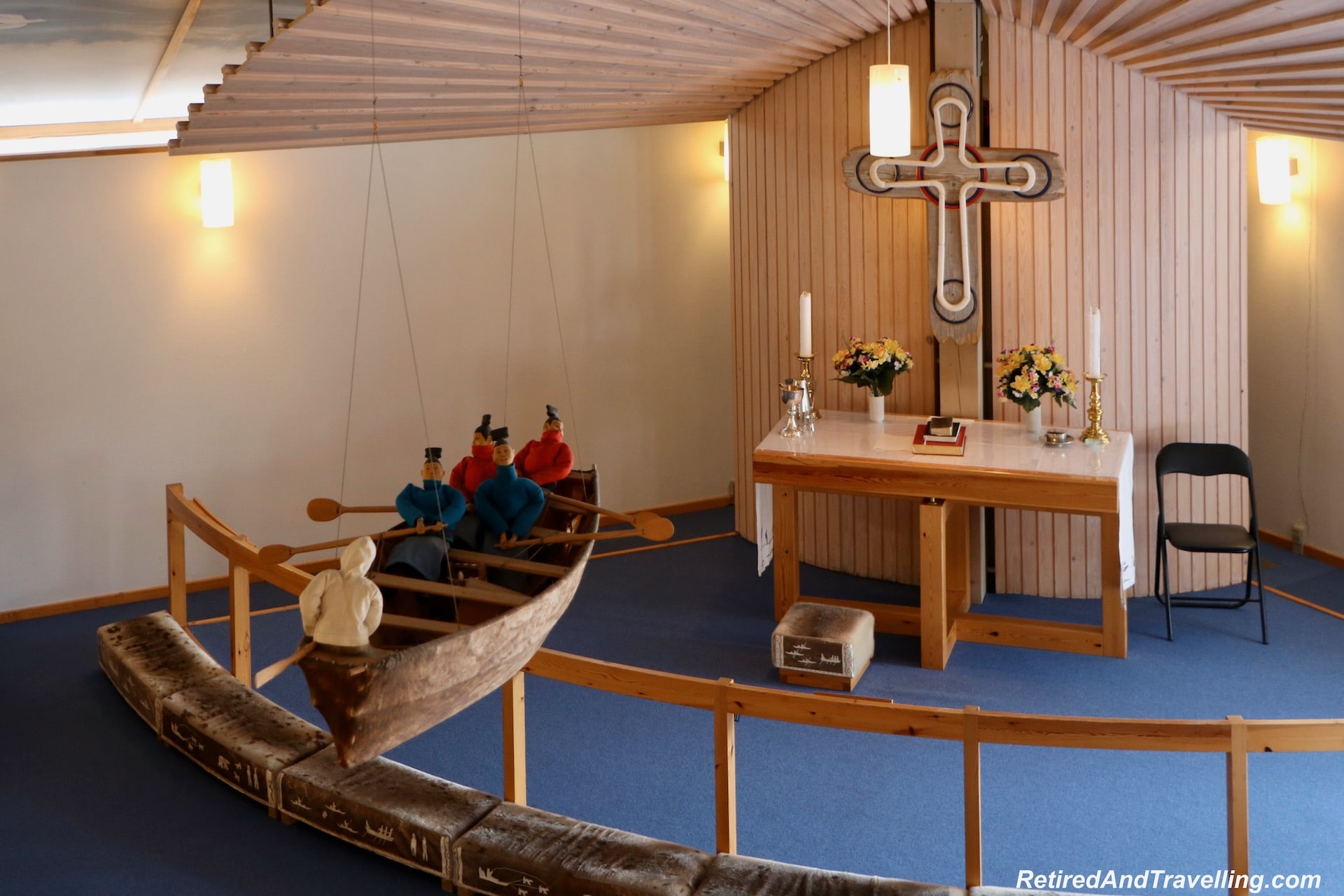 As we walked down the hill we saw the local tourist information centre. Outside the building was an interesting sign that pointed in all directions. It was amusing to look at what places were pointed to from Greenland. 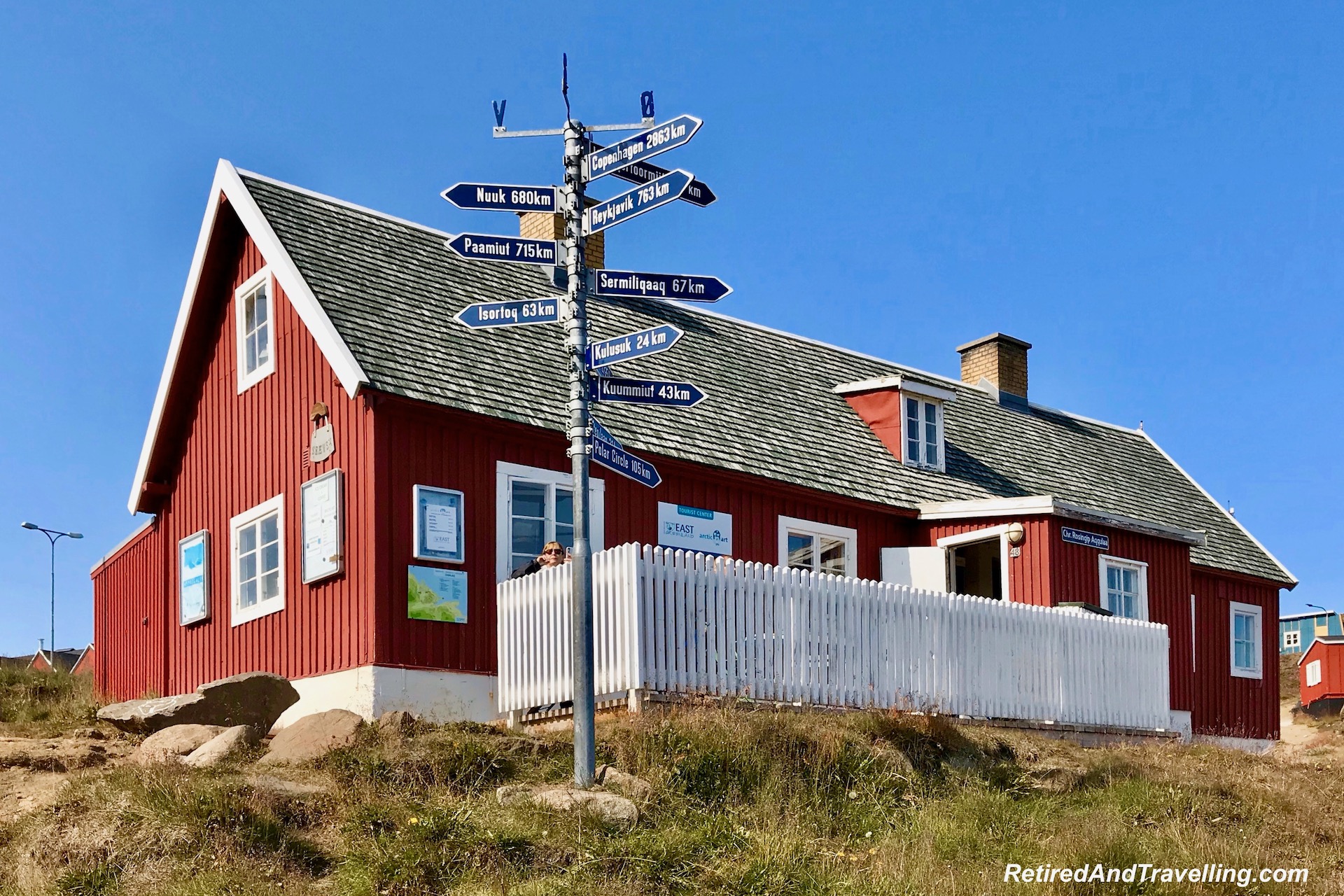 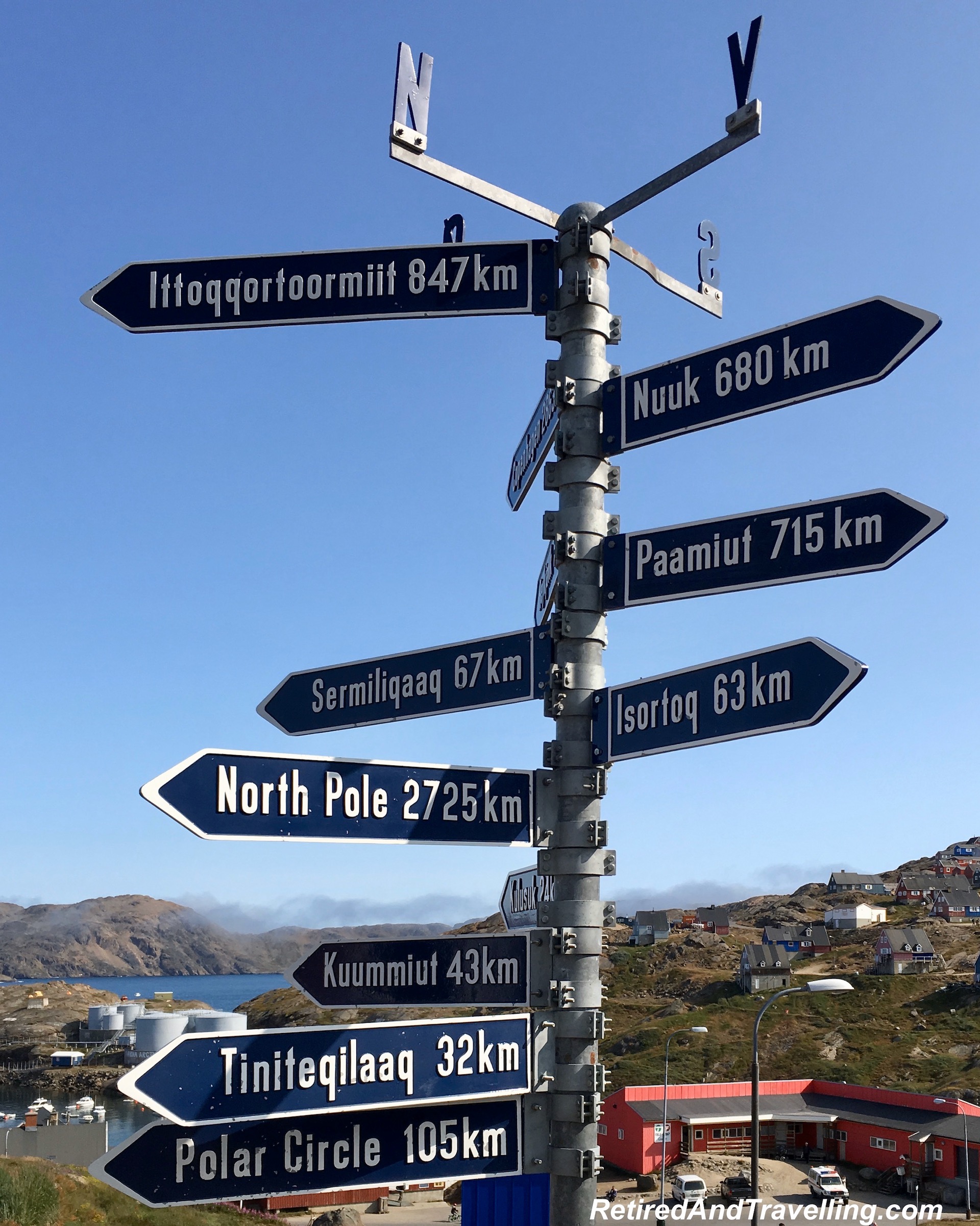 A mural adorned the side of a building. It showed scenes of life in this northern community. At the bottom of the hill we came to the inner harbour. And found it filled with fishing boats back from the early morning runs. 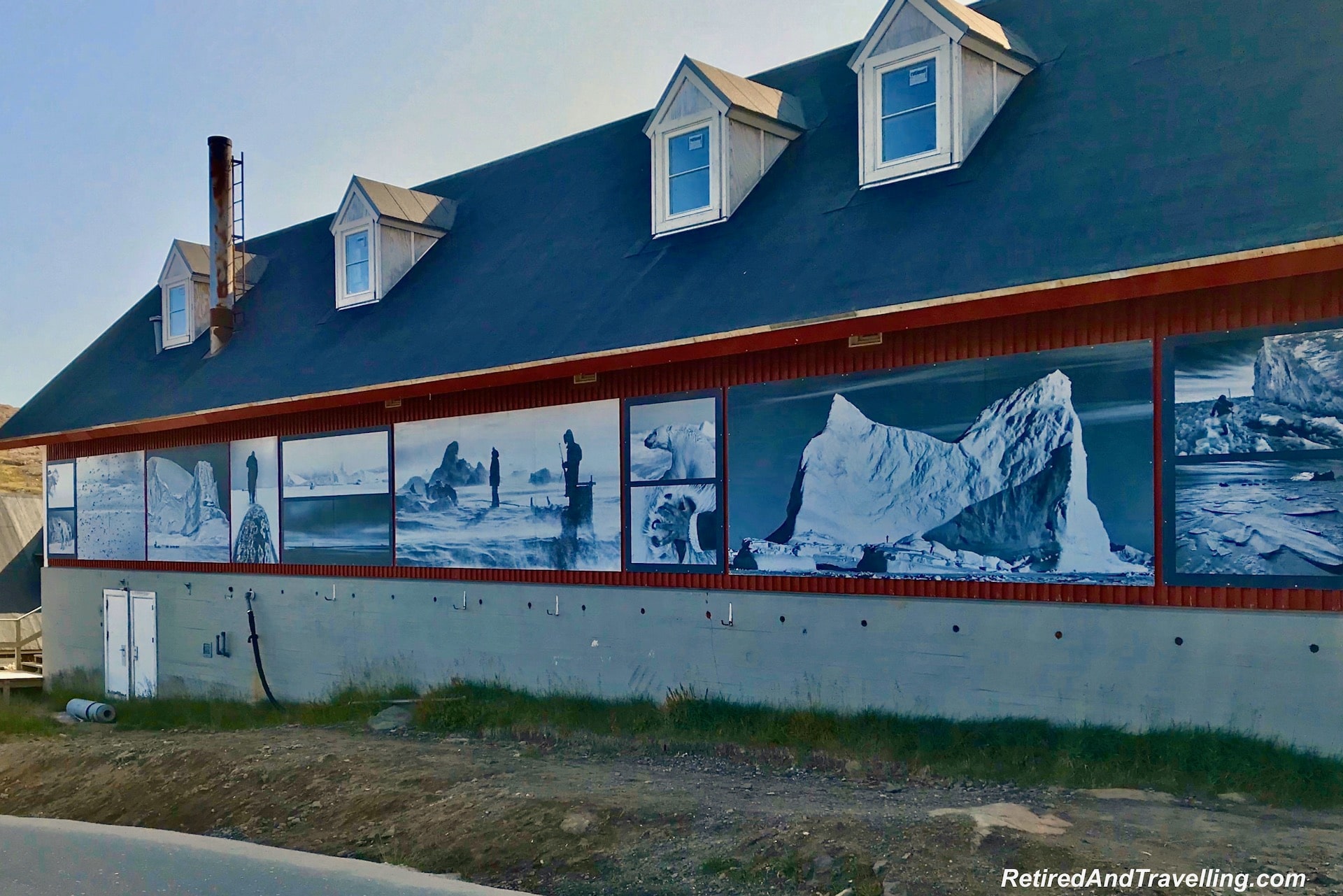 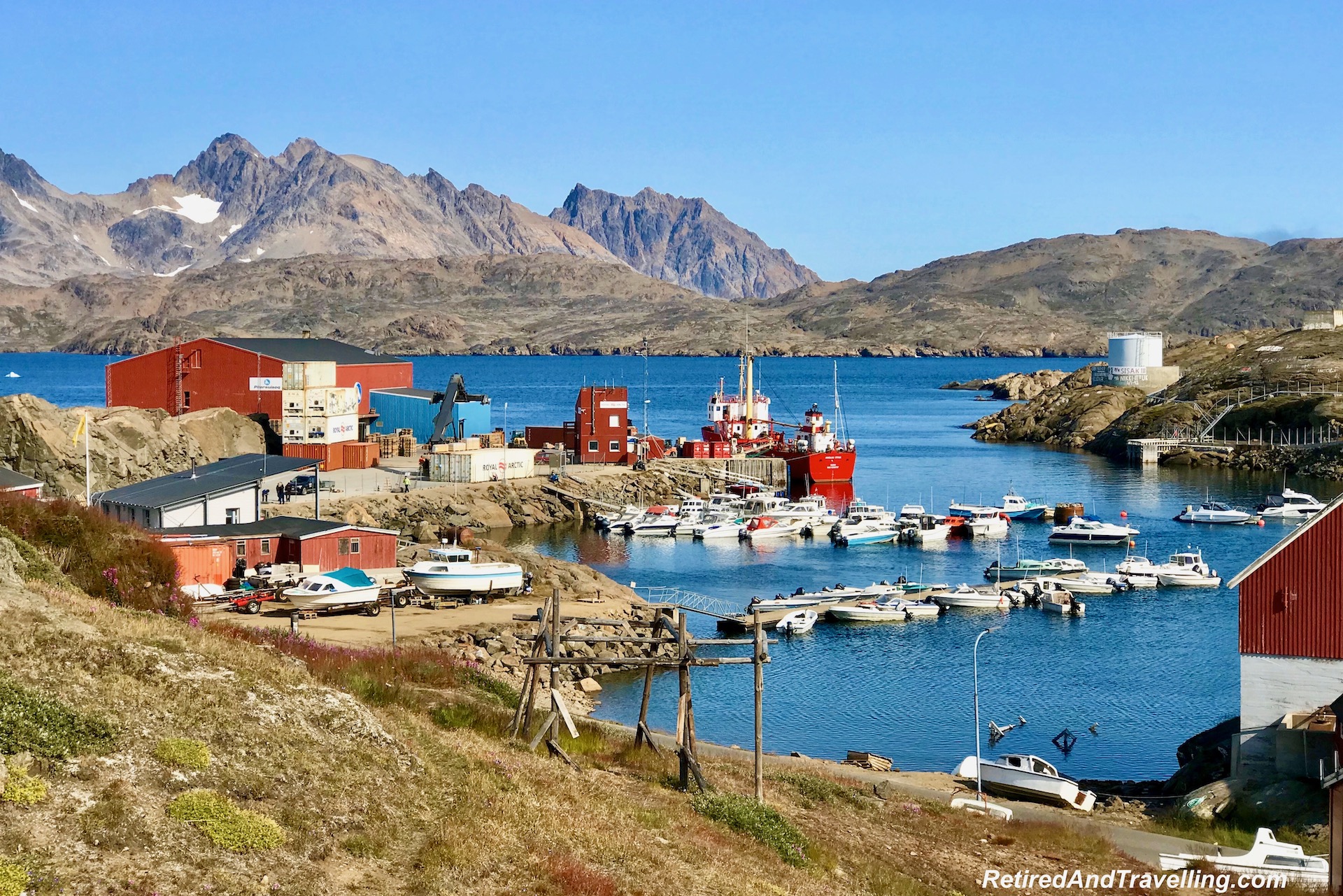 The last stop on our walk through Tasiilaq was at the local museum built into the side of a hill. We did not have time to go inside. But we walked around the local native art sculpture that stood on this site. 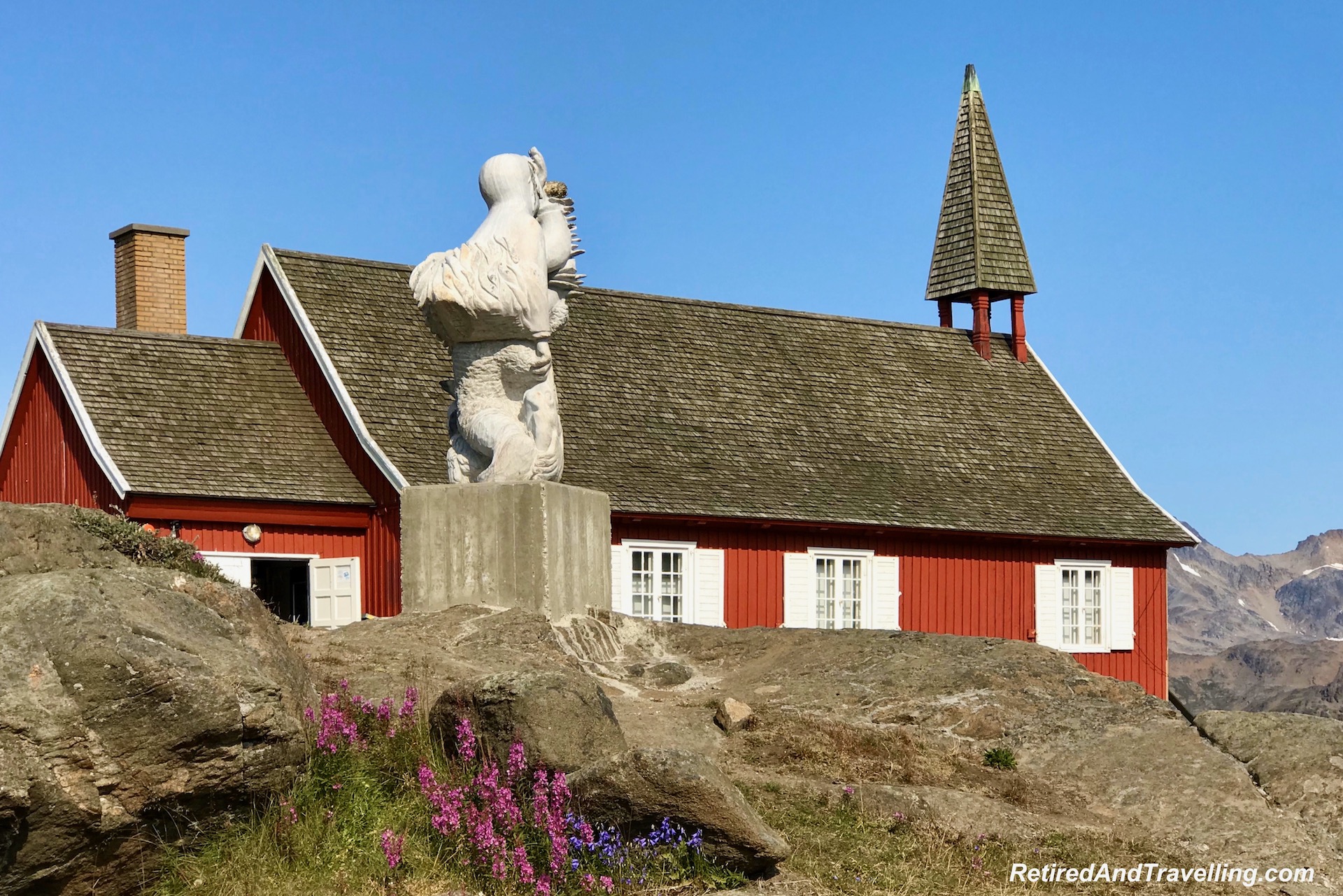 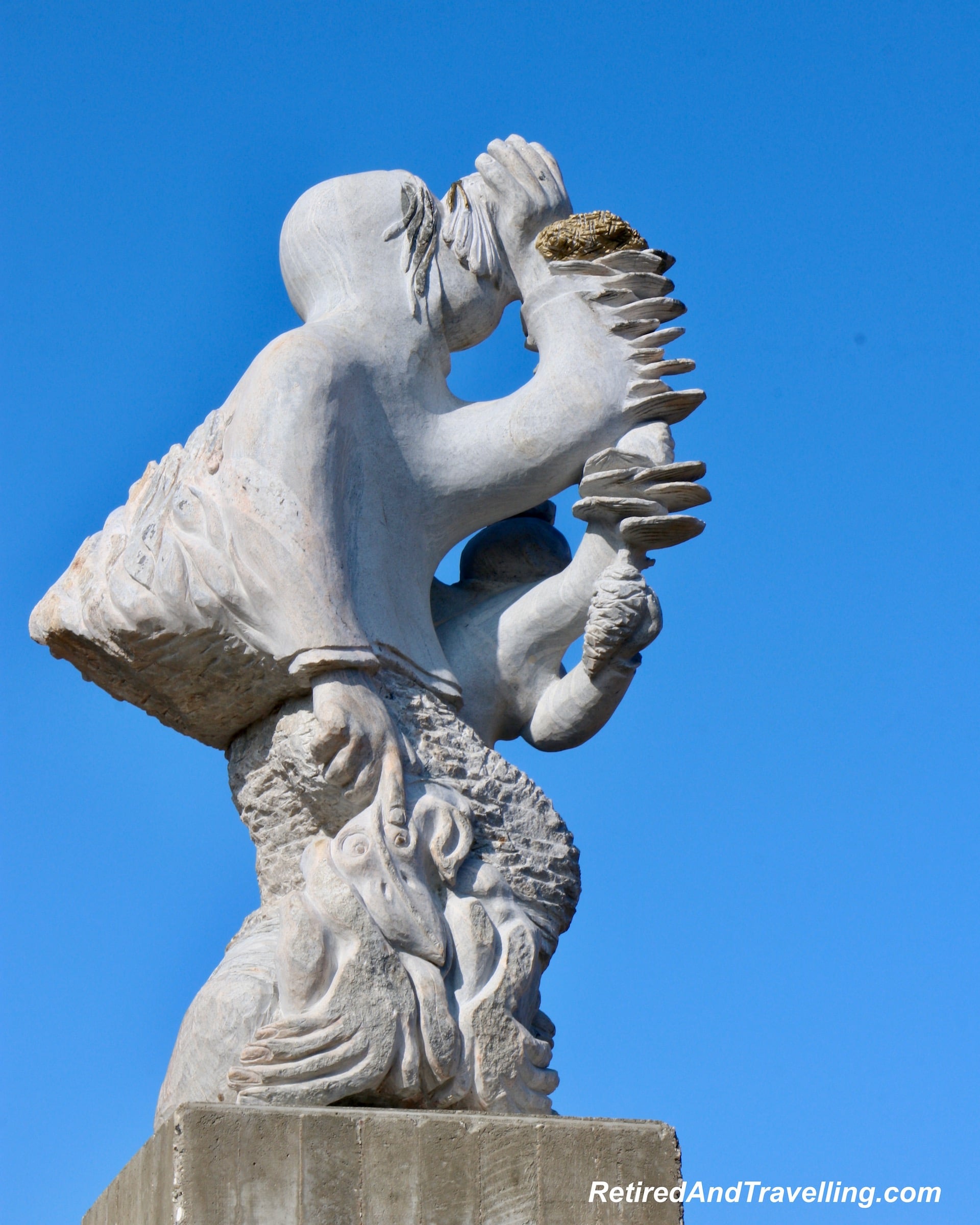 We went full circle around the small town of Tasiilaq and were back at the cruise tender dock. It was a short ride back to the ship after our surprise cruise stop in Tasiilaq. 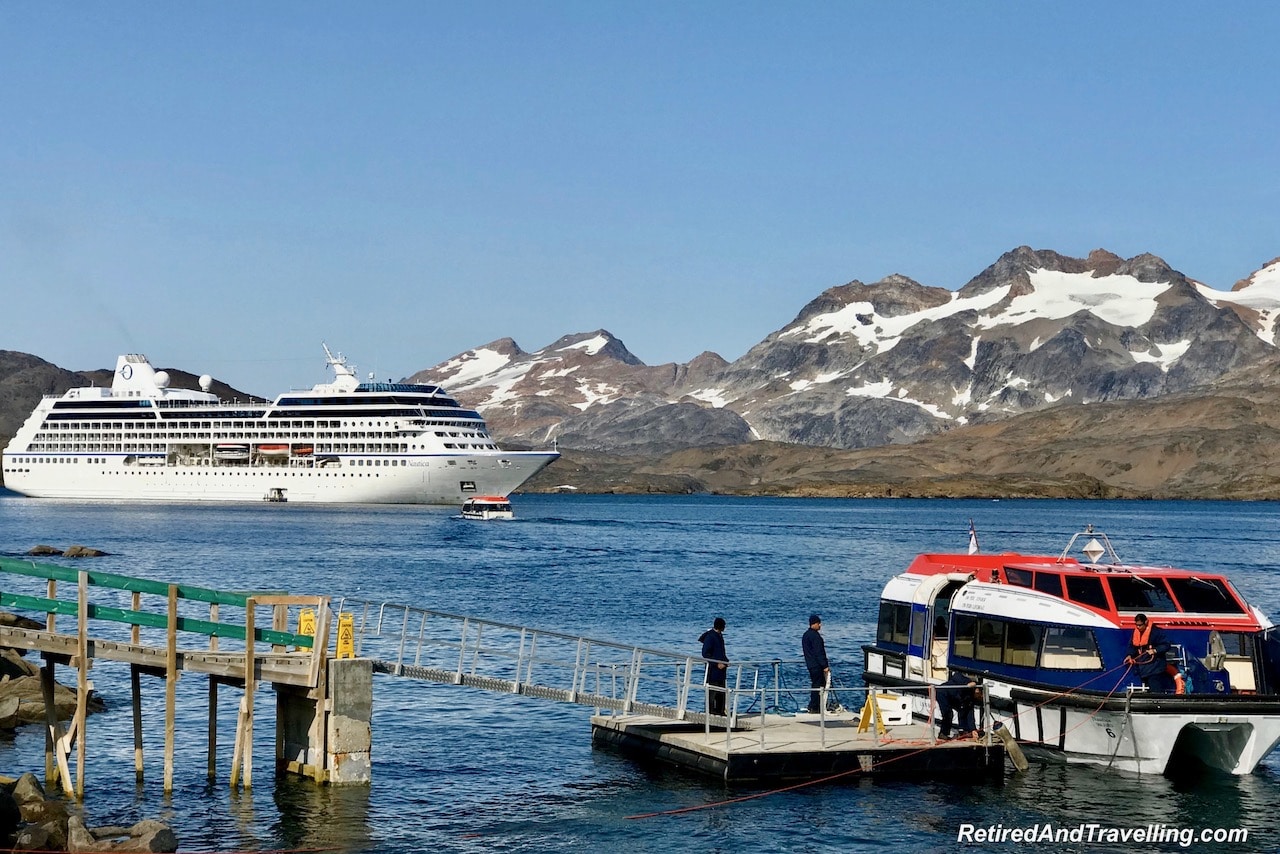 We were definitely disappointed when the whole of our original Greenland cruise itinerary was removed. We really looked forward to the trip through the fjords. And the ports on the west side of Greenland.

But our surprise cruise stop in Tasiilaq provided us with a charming view of a small town in Greenland. I suspect that it was similar to one on our original itinerary. We definitely wished there had been time for excursions away from the port town.

The other upside to the change in cruise itinerary was that we added 2 full days to our next stop in Reykjavik. And we definitely made the most of that extra time.

Have you done a cruise stop in Tasiilaq? Or visited another part of Greenland? If we re-plan a visit to Greenland, what do we need on our “must see” list? 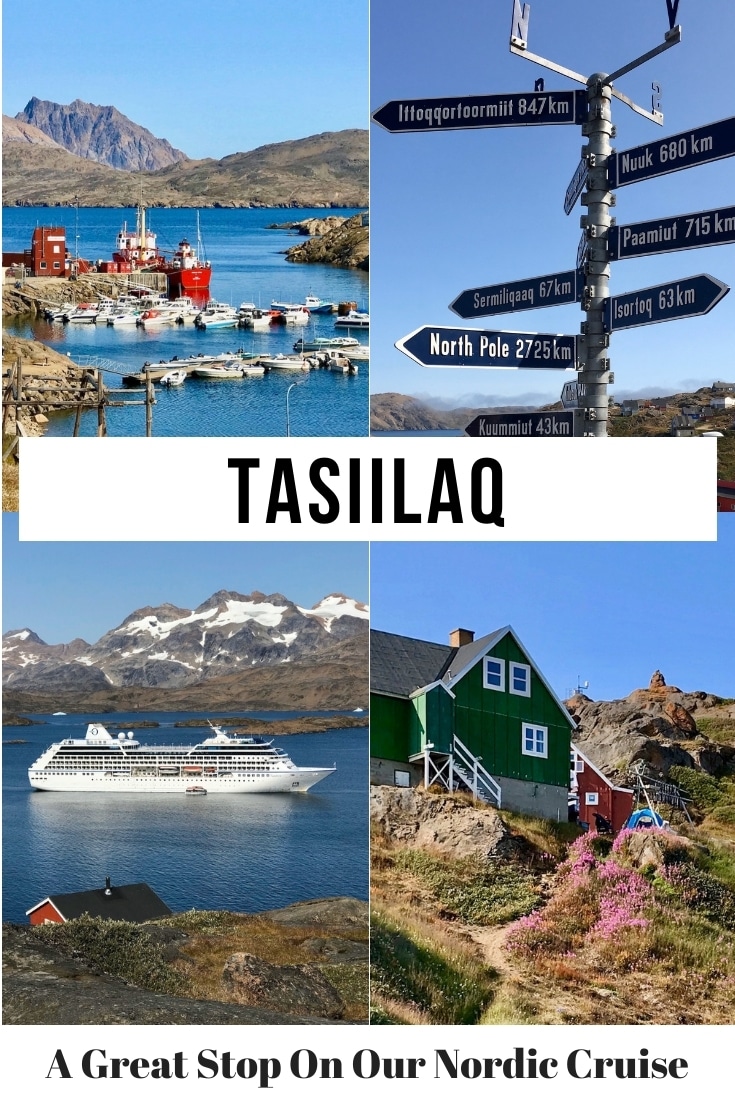 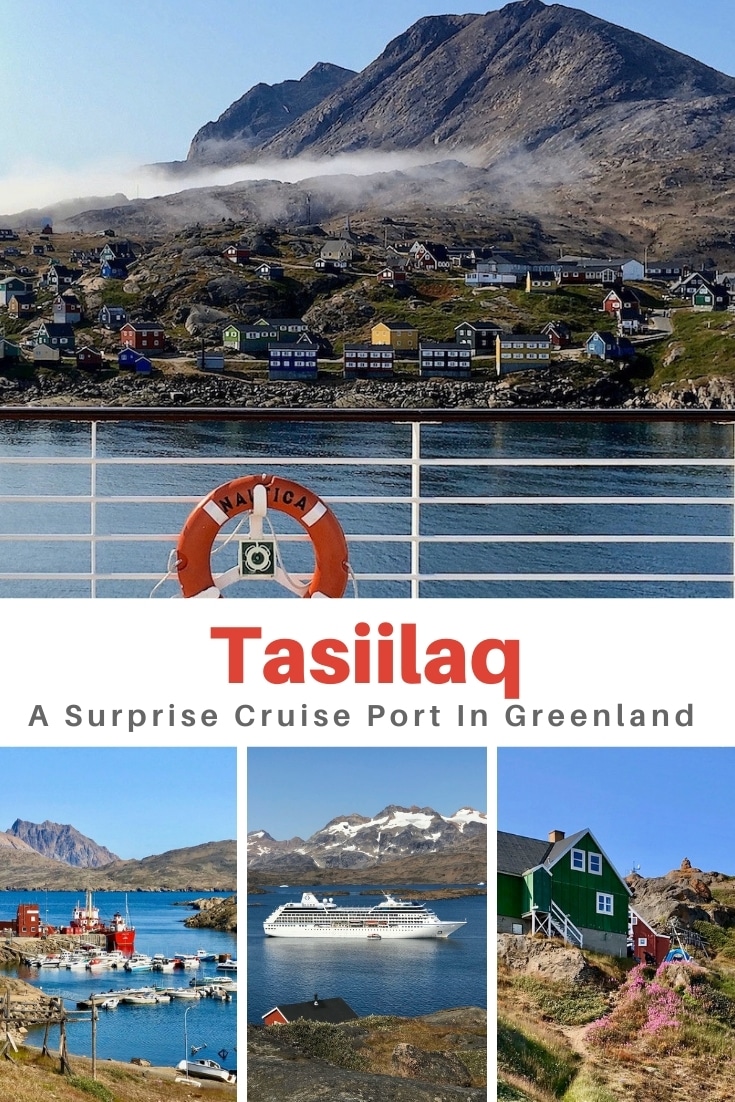