Check In At Vancouver, BC

Check in at the train station in Vancouver was quick and relatively painless. We went thru passport control in Vancouver.  But the train stopped again at the border while customs agents came on board and checked documents.

The carry on baggage limits were generous and might have allowed us to keep our bigger bags with us.  But we took advantage of the baggage check and kept only our small rolling bags with us.  Baggage pickup in Seattle was inside the station.  The wait was reasonable enough to not act as a deterrent for the second leg of our train trip.

When we saw the food onboard the Amtrak Cascades, we really wished we had taken the hint and went to Tim Hortons before boarding in Vancouver.
Most of the food was pre-packaged and plastic wrapped.  Having been spoiled with good coffee in Vancouver, the train coffee was undrinkable. The young guys found no issues with the bottled beer.  There was strict enforcement of not carrying fruit into the US.  So we had to throw away a bag of apples (that probably came from the US originally). Unfortunately, my protein bars were in the bag I checked.
The dining car had seating if we wanted a break from our seat.  On our second trip, we planned ahead and brought food with us.

Working On The Train

The wifi onboard the Amtrak Cascades was a nice surprise.  We got caught up mail and tweets.  Although it was not good enough to continue downloading my movie.
The overhead monitors displayed the progress on the route, although they were not showing the 300 km per hour speeds we got used to on trains in Europe.
We like to travel by business class on trains in Canada.  So we considered business class on the Amtrak Cascades.  But we found the coach seats to be comfortable.  Although next time I will be more careful and pick a seat on the water side.  There were some great sights along the path we travelled.
The nice thing about train travel was we could easily get up and move around. Most passengers were respectful of others, keeping conversations quiet and headphones on.

We Enjoyed Our Travels On The Amtrak Cascades

Overall, both legs of our Amtrak Cascades train travel were great. Compared to train travel in Canada, the fares were really inexpensive.  It beat driving for the first legs of our 5 week trek down the west coast.
We will definitely consider this again!  One year we would like to consider a train pass for a longer cross country trip.
Have you travelled the west coast on Amtrak Cascades?
PIN To Pinterest: 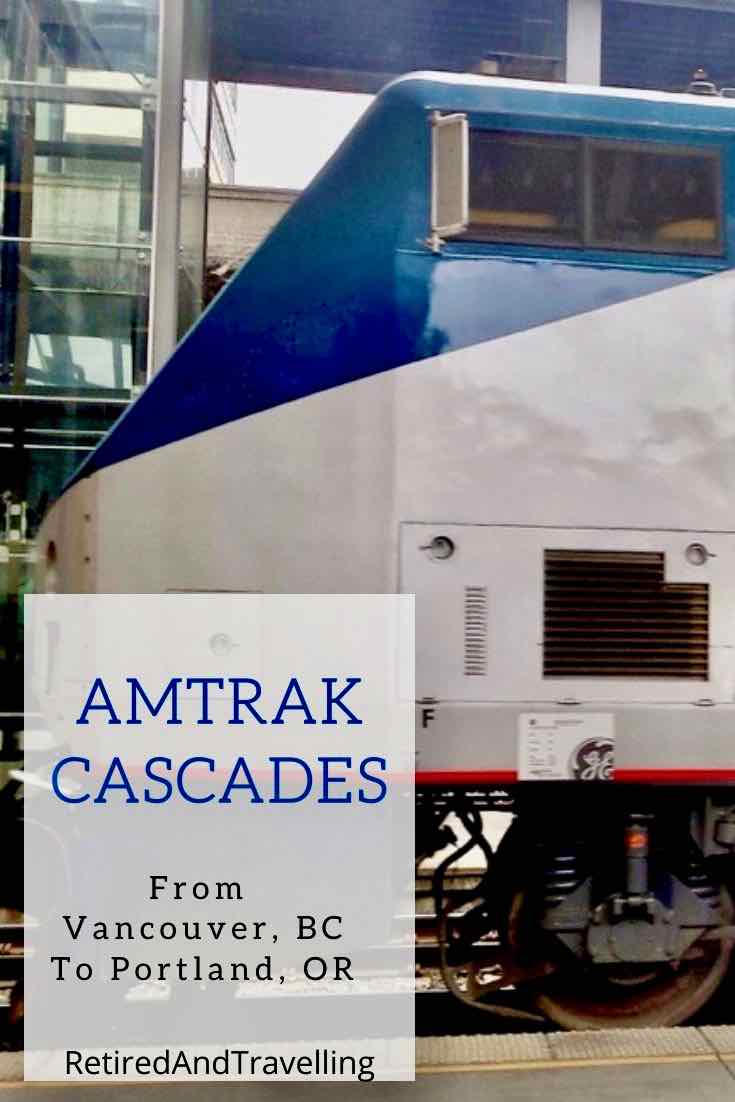