After touring through Yellowstone Park on our national park tour, the next place on the hit list was the Grand Canyon. While we planned to see both the north and south rims of the Grand Canyon, we were blown away by the Grand Canyon North Rim surprise!

Leaving Jackson we travelled up over the Grand Tetons and hit I-15 for our run south. Leaving WY we entered Utah. Our route took us through the almost fully interconnected cities of Ogden, Salt Lake City and Provo.

As we travelled down I-15 we followed the flight path we took on our recent visit to Albuquerque, NM for the Balloon Fiesta. The distinctive land features we saw from the air were visible as we drove and snapped pictures. We started to see the red earth and distinctive layering of the soil that sharpened as we hit the Grand Canyon. 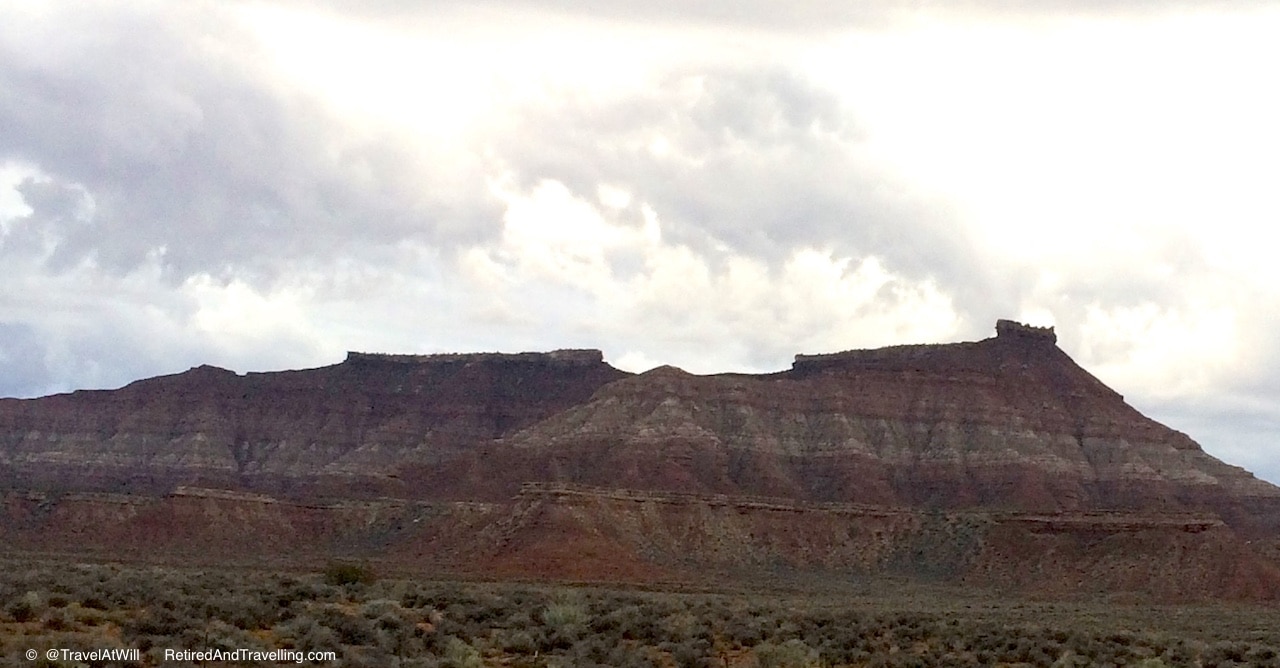 The plan was to stay in Cedar City, UT for the night before we pushed on to Arizona and the Grand Canyon. We had our first road trip panic moment when our car key fob started sending “low battery” alarms. Every time we stopped that day we were worried that the car would not start again. A little internet research showed us how to change the battery. And as soon as we hit Cedar City we went battery shopping. We breathed a sigh of relief once the alarm light went out.

Most people only get to see the Grand Canyon South Rim from the Skywalk glass observation floor at Grand Canyon West in the Hualapai Indian Reservation (an easy drive from Las Vegas). But we planned for the full tour. In doing the planning, I was sure that I wanted to start with the North Rim. Even though only 10% of people visit this side of the Grand Canyon. Little did we know that the Grand Canyon North Rim surprise would prove to spoil us for the rest of the Grand Canyon tour. If you are interested in grand canyon tours you might want to visit somewhere like Tour4Fun for more information.

As the rain drenched us heading into Cedar City, we wondered about the weather for our Grand Canyon visit the next day. The warmer fall would keep the roads open on both the north and south sides. But rain and visibility was another issue. When the rain stopped that night, we thought we were safe to sit on the patio for a really great Italian pizza at Centro Pizza. But had to retreat inside to eat.

Multiple weather sources suggested that we would see rain and maybe thunderstorms for our day at the north rim. But we might be ok if we arrived earlier in the day. Hustling out of the hotel by 7am proved to be the right decision. Had we really been trying to do as many national parks as possible, we would have planned to visit both Bryce and Zion National parks in Utah. I have seen a lot of amazing photos of both of these awesome places. But on this trip we passed them by.

It was an easy drive to get us to Jacob Lake and the turnoff to the Grand Canyon park north rim entrance. After a quick snack and bathroom break we were ready to move on. We were still trying to beat the weather. 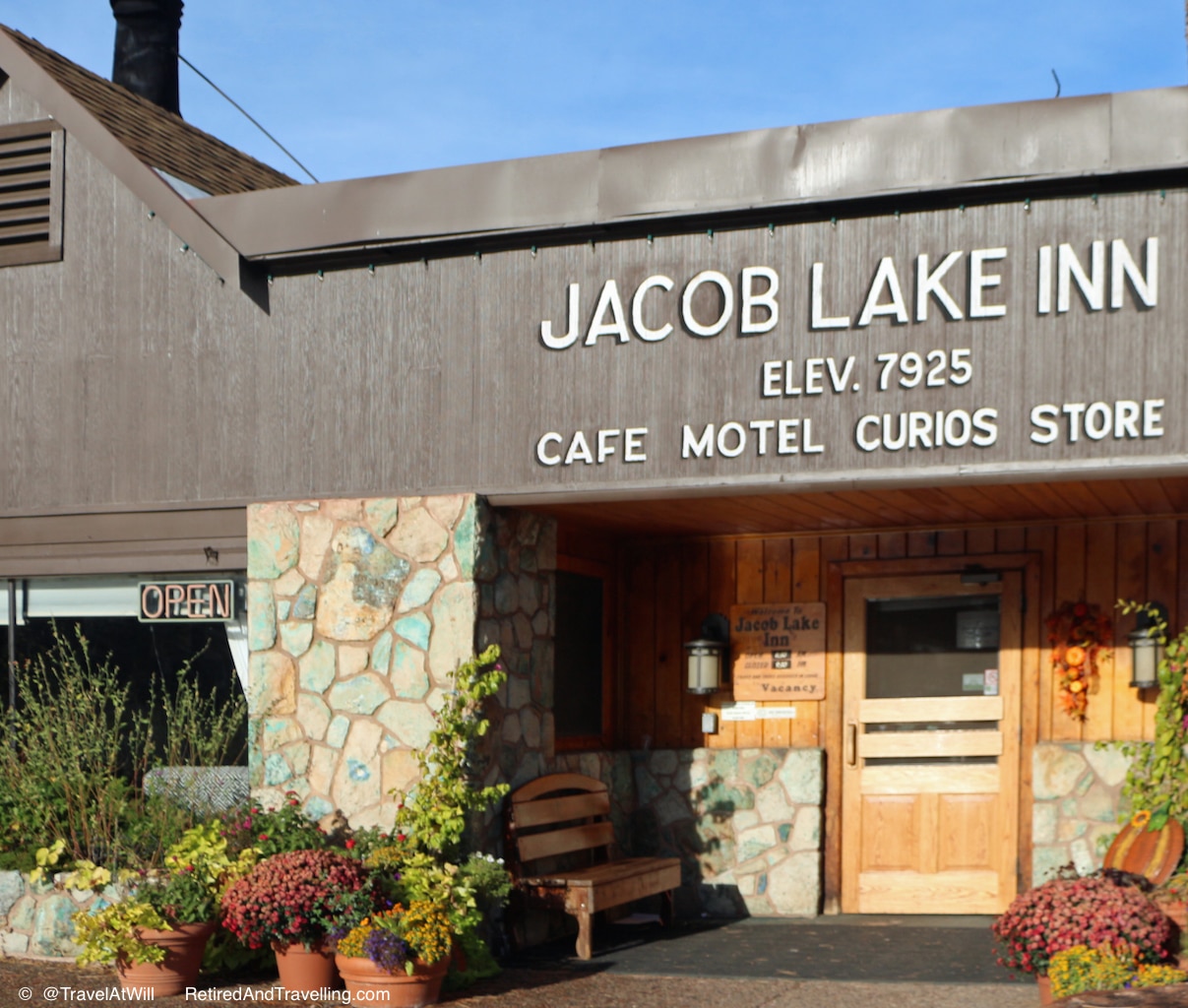 Entering the park, it was still another hour to the North Rim Visitor Centre. Despite there being several road signs about wildlife, we saw no buffalo and no other animals. We saw large tracts that showed signs of massive forest fires that had raged. It was late fall and while there was still some colour in the trees, as we went higher the trees were quite barren. 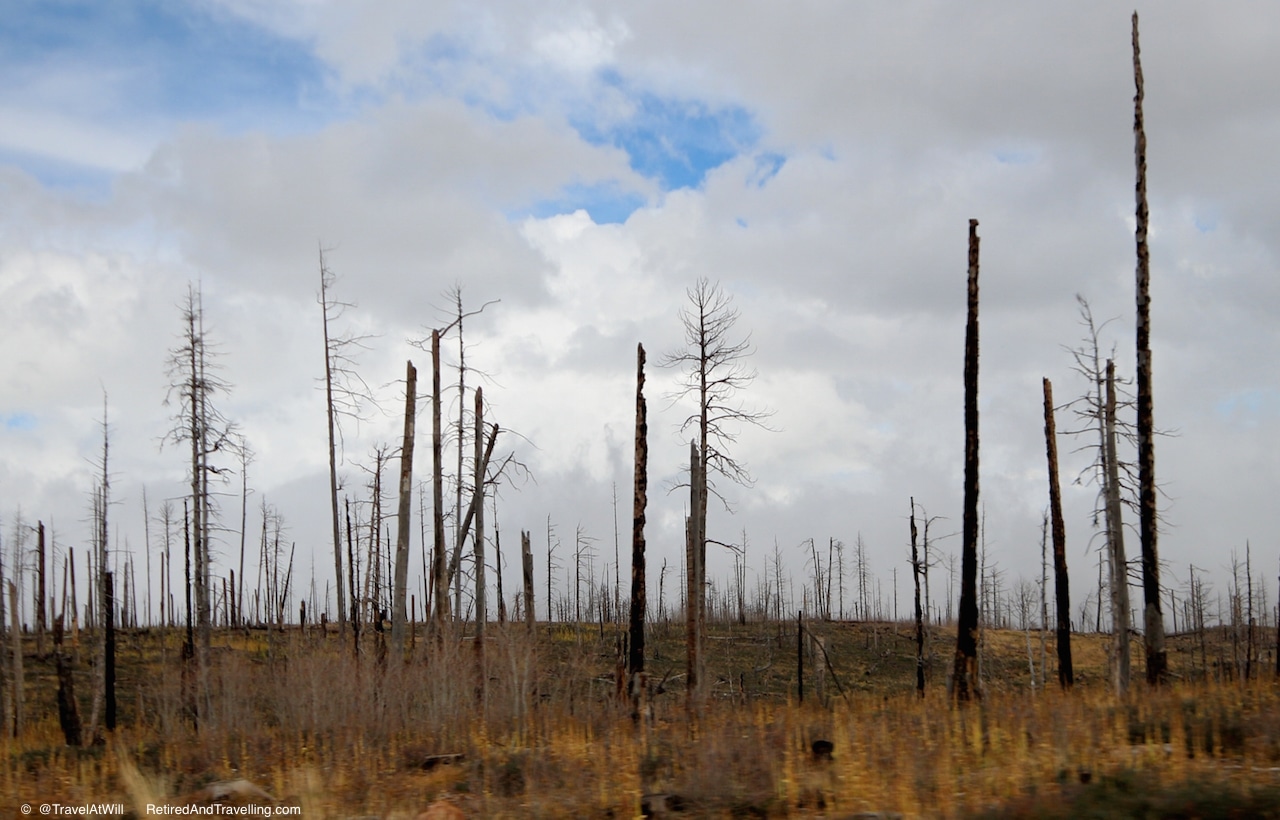 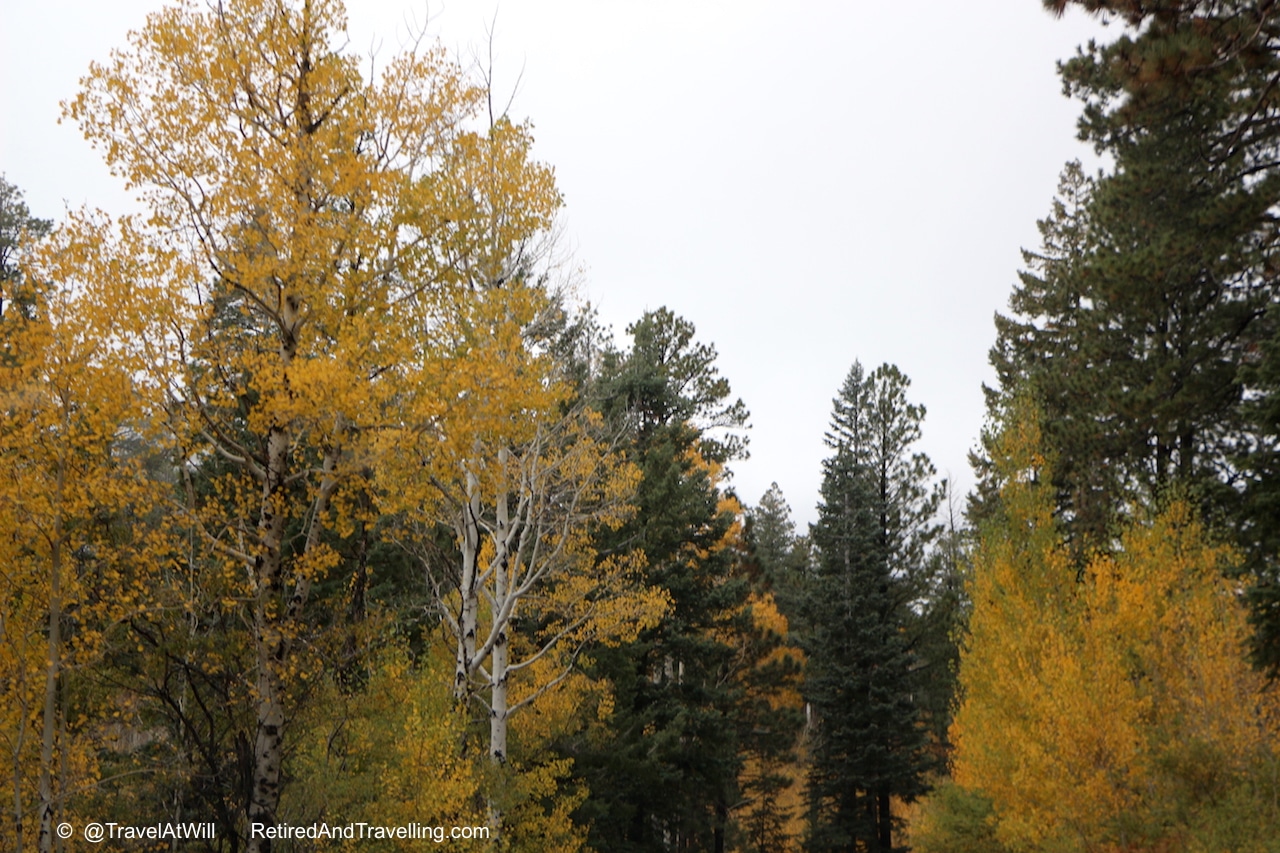 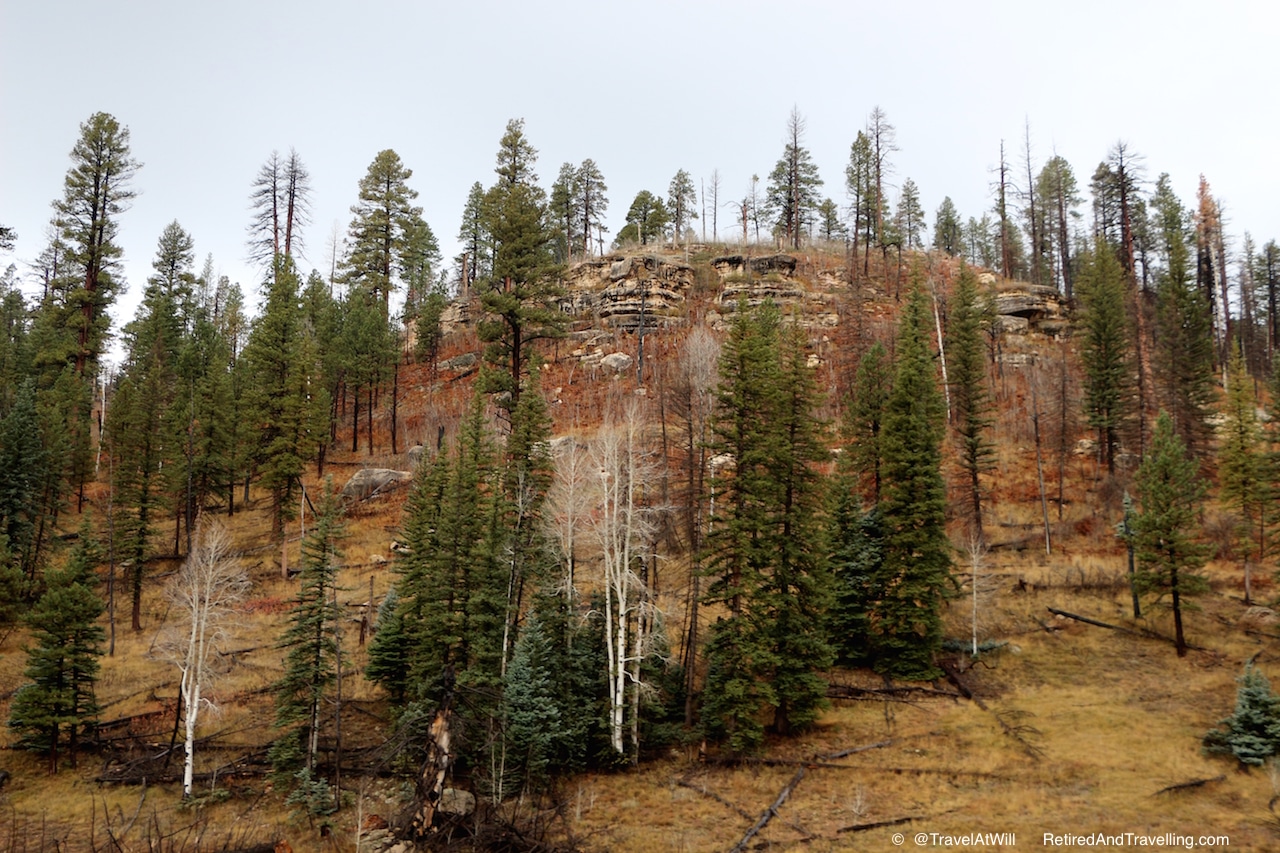 It was quiet when we reached the North Rim Visitor Centre. There were few visitors and what looked like empty lodge cottages. We looked at the map of the North Rim and decided that we would try to get to all the observation points on this visit. We hoped to see it all before the weather set in. It was quite a different Grand Canyon North Rim surprise at each of our stops. 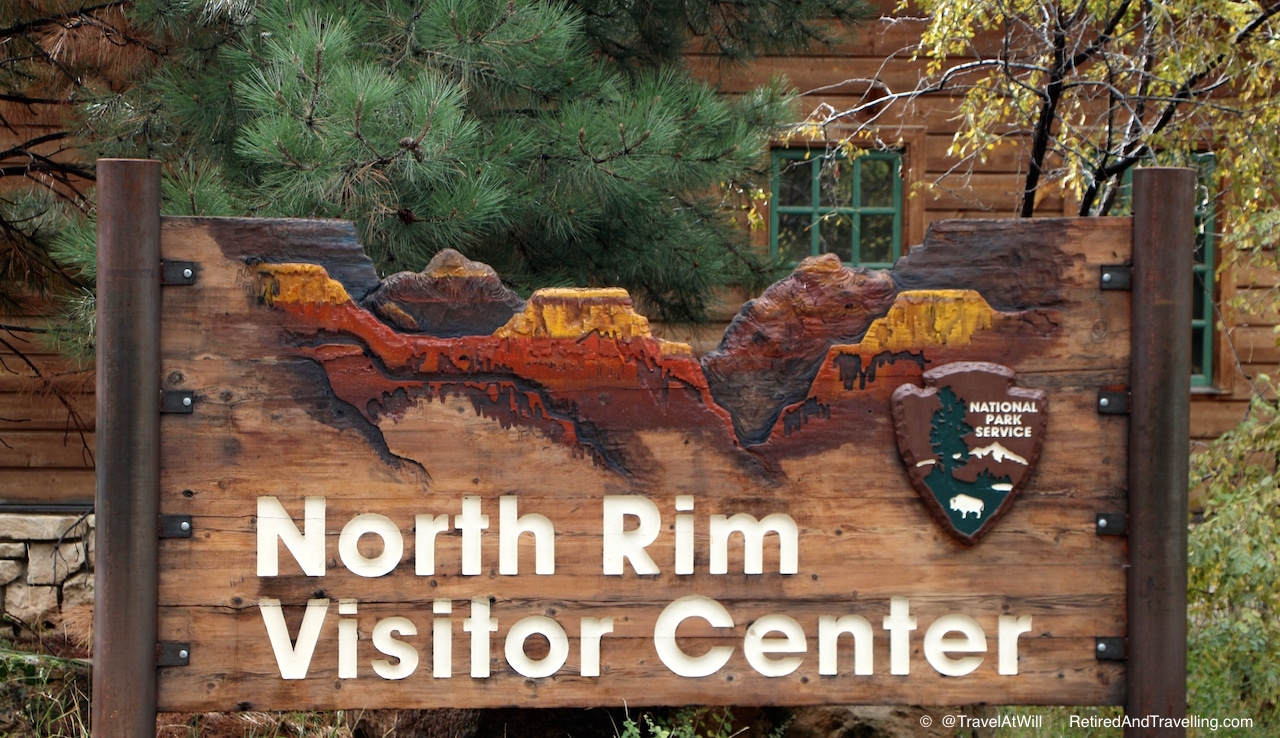 Our First View Of The North Rim

The main path to the rim was easy to find. While I had seen pictures of and we had recently flown over the Grand Canyon, I was not prepared for the steep cliffs. There was such amazing geology that lay in front of us. This first view was just a taste test of what was to come! 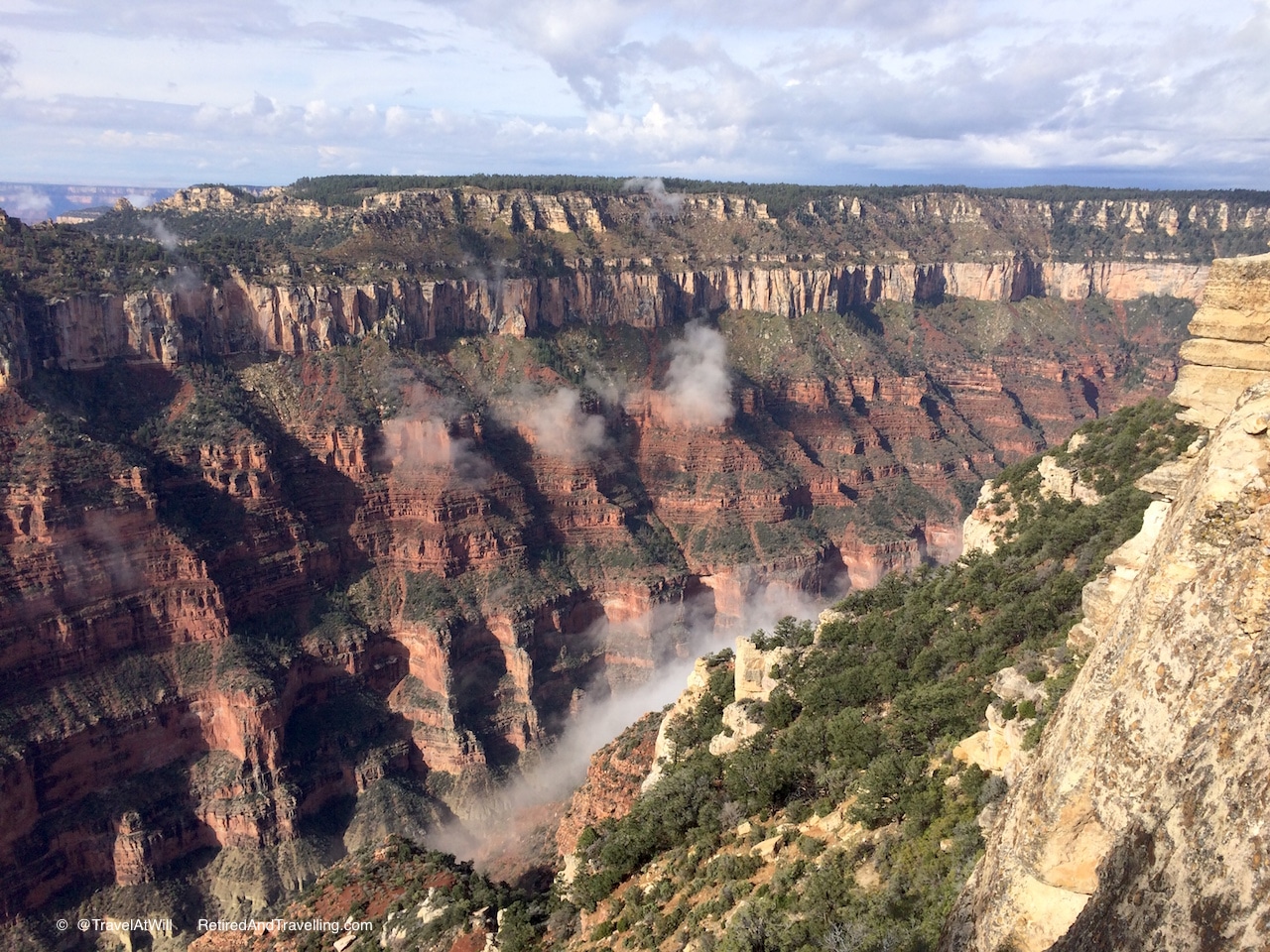 We easily found the path to get our first view of the north rim. And then headed off on the longer path that took us out to Bright Angel Point. As the path went steadily down I was worried about the effort it would take to climb back up at this altitude. A huffing and puffing man coming back from the view point stopped to tell us that the trek was worth it. So I proceeded on, comforted by knowing that I could stop as I needed on the return trip. 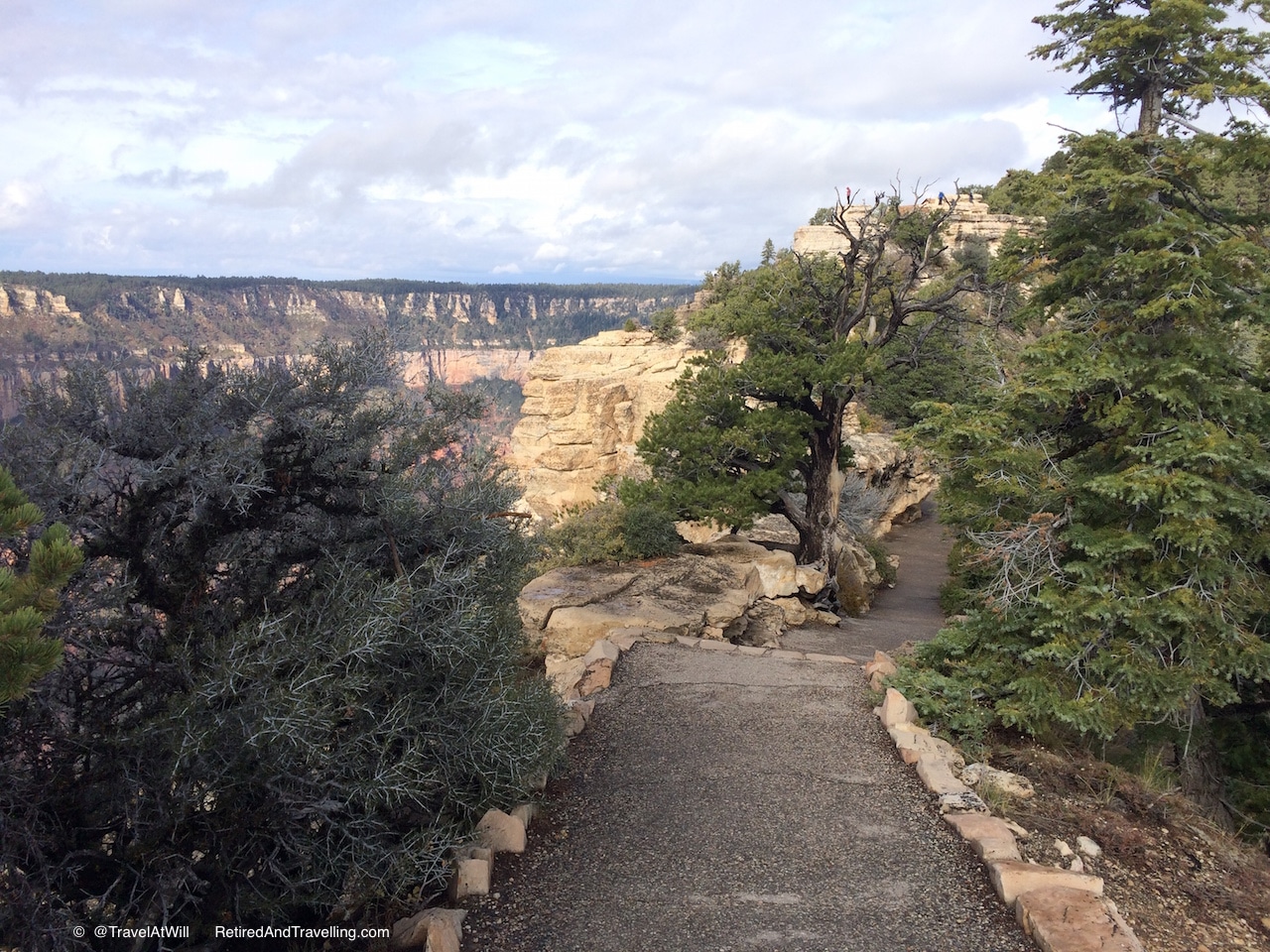 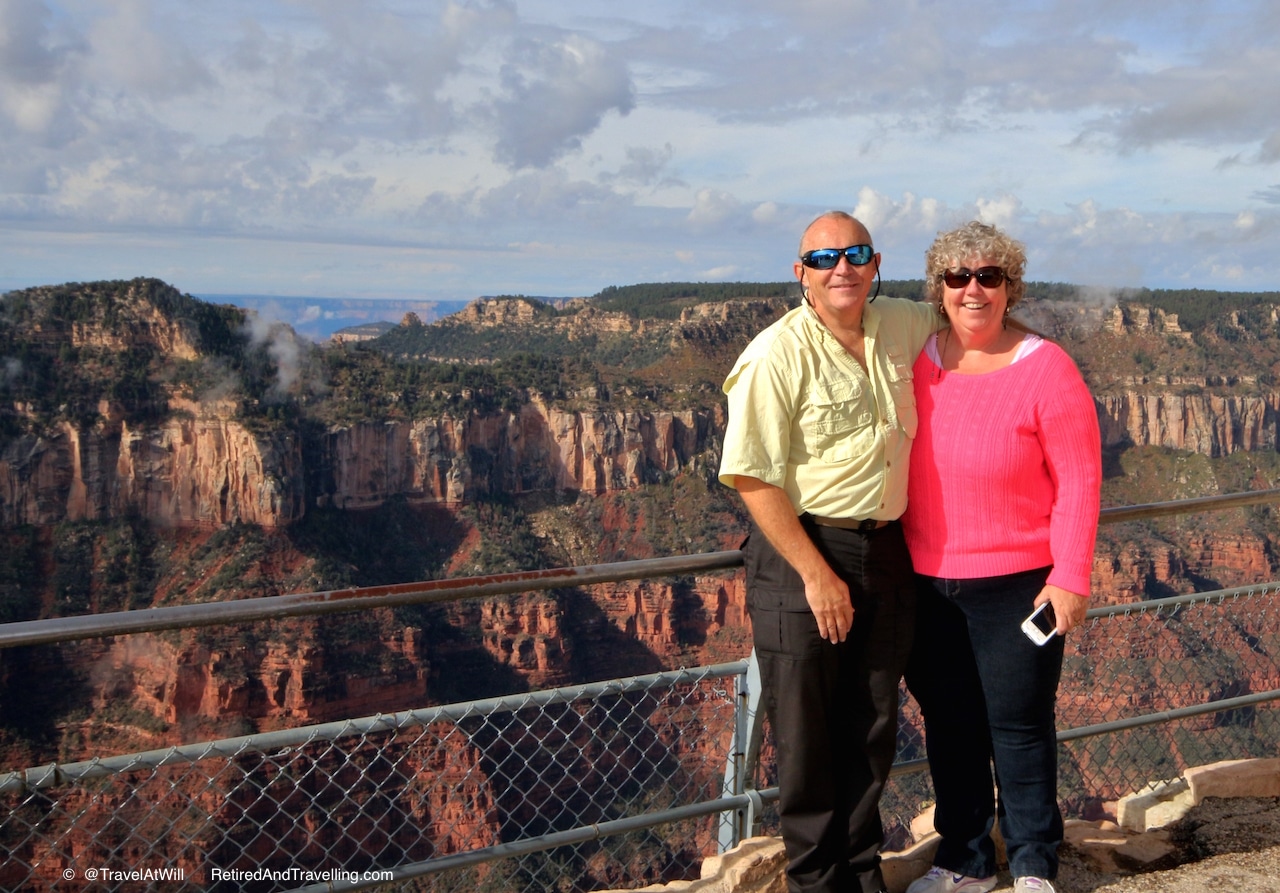 The views from all of the observation points at this stop were great. We got a taste of the brilliant rock colours of the Grand Canyon. And an equally interesting view of the clouds or fog as it rolled around the peaks. 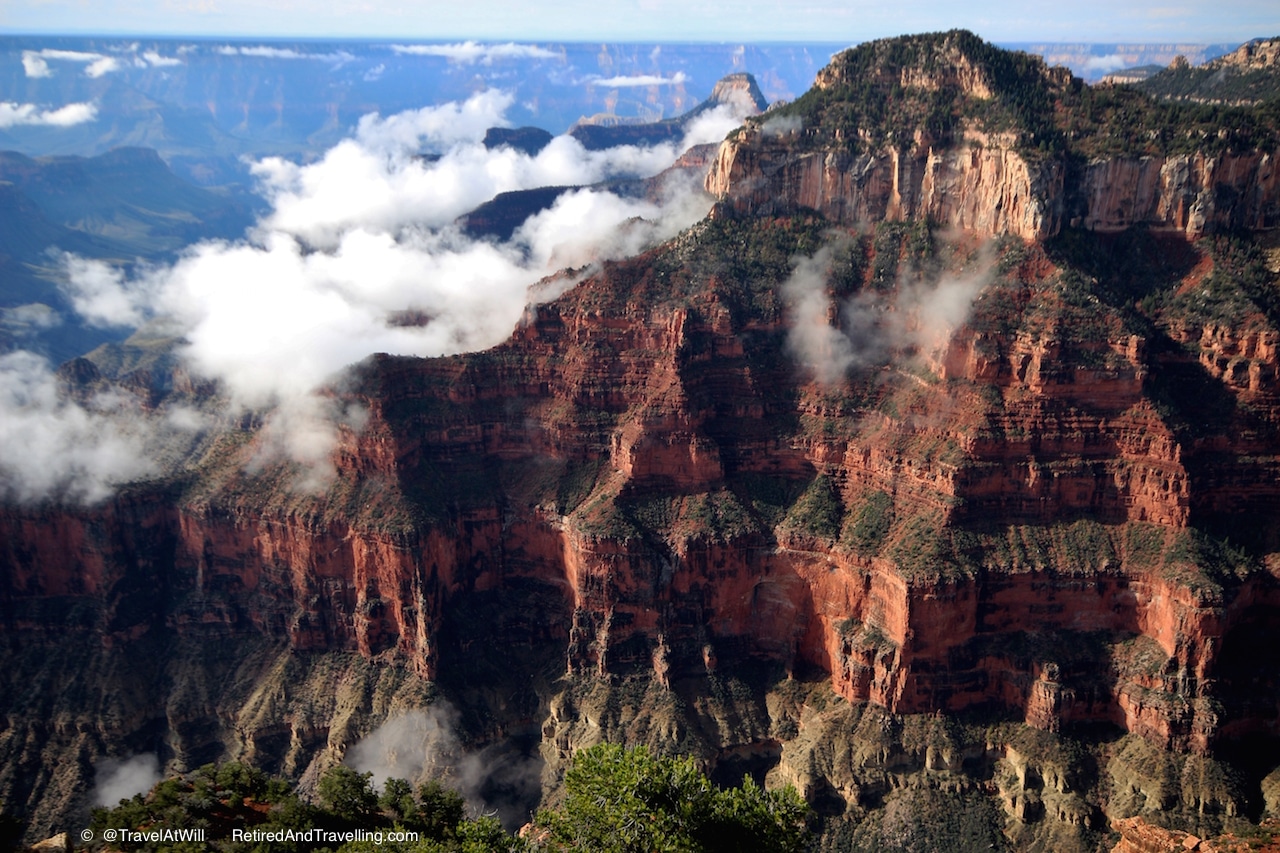 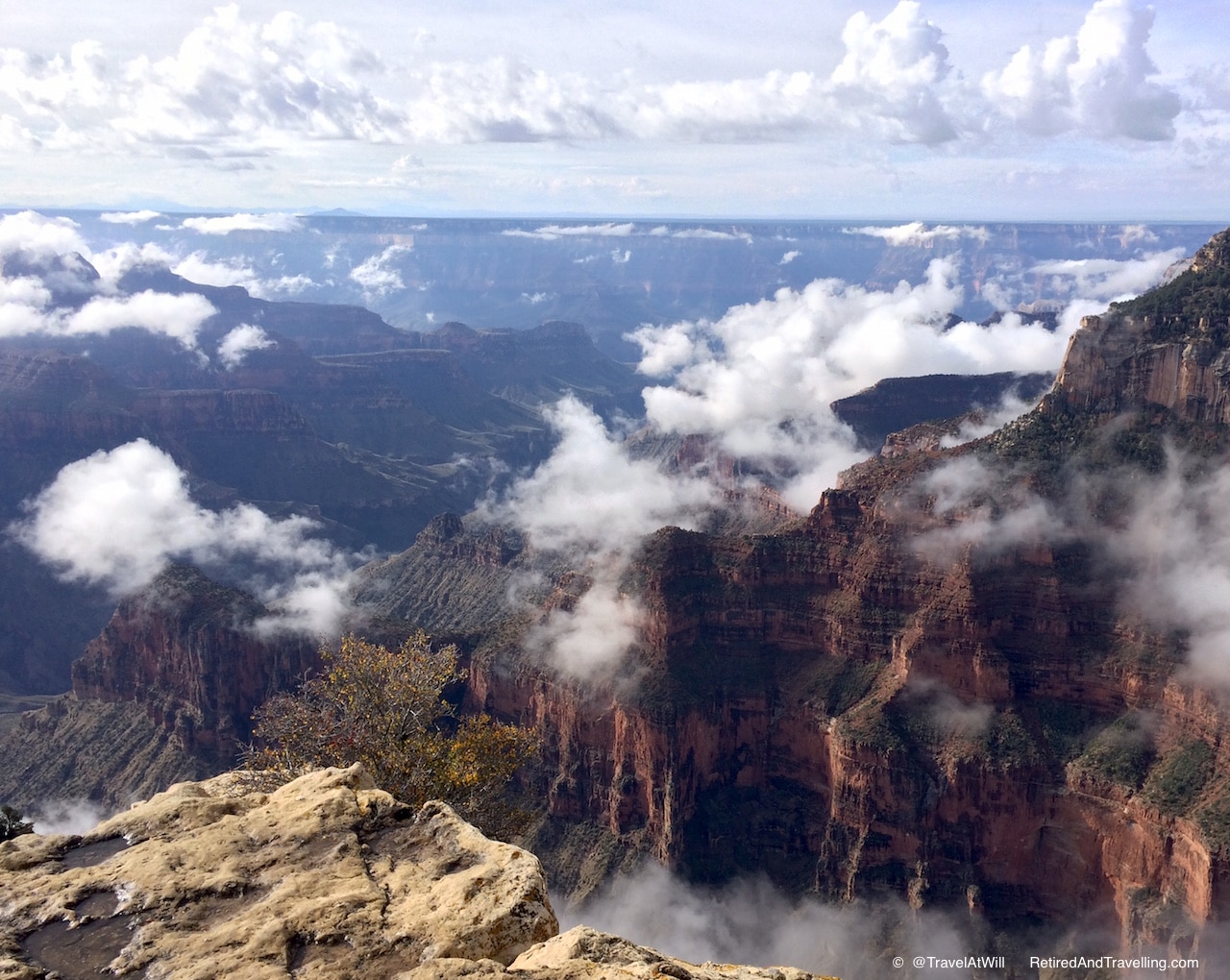 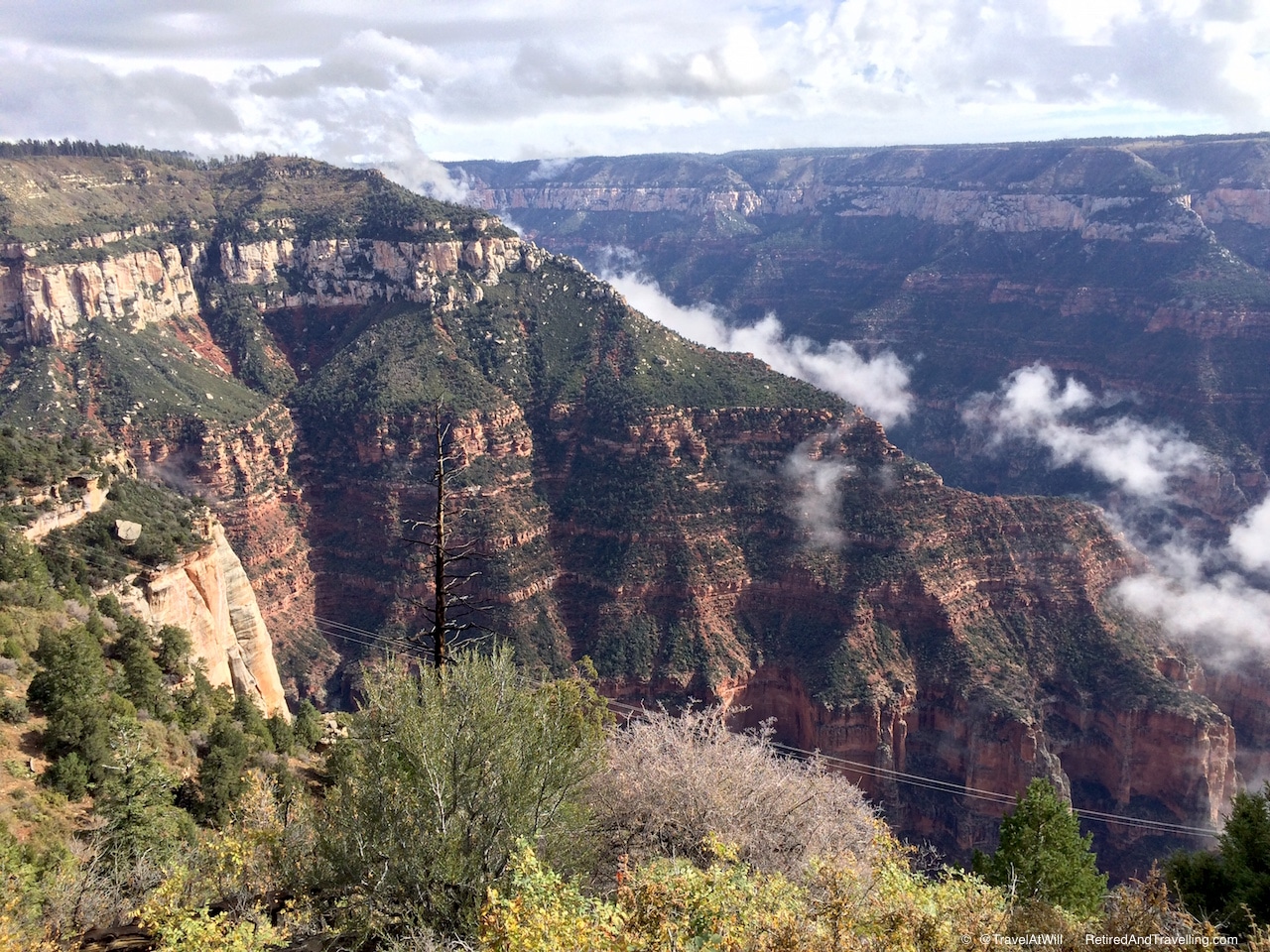 Our first view certainly proved to be a Grand Canyon North Rim Surprise!

Not wanting to miss a thing on this north side of the Grand Canyon, we headed off for a longer drive to climb to Point Imperial. As we drove steadily higher, we came in and out of patches of fog. And we were not sure if it would be worth the trip. 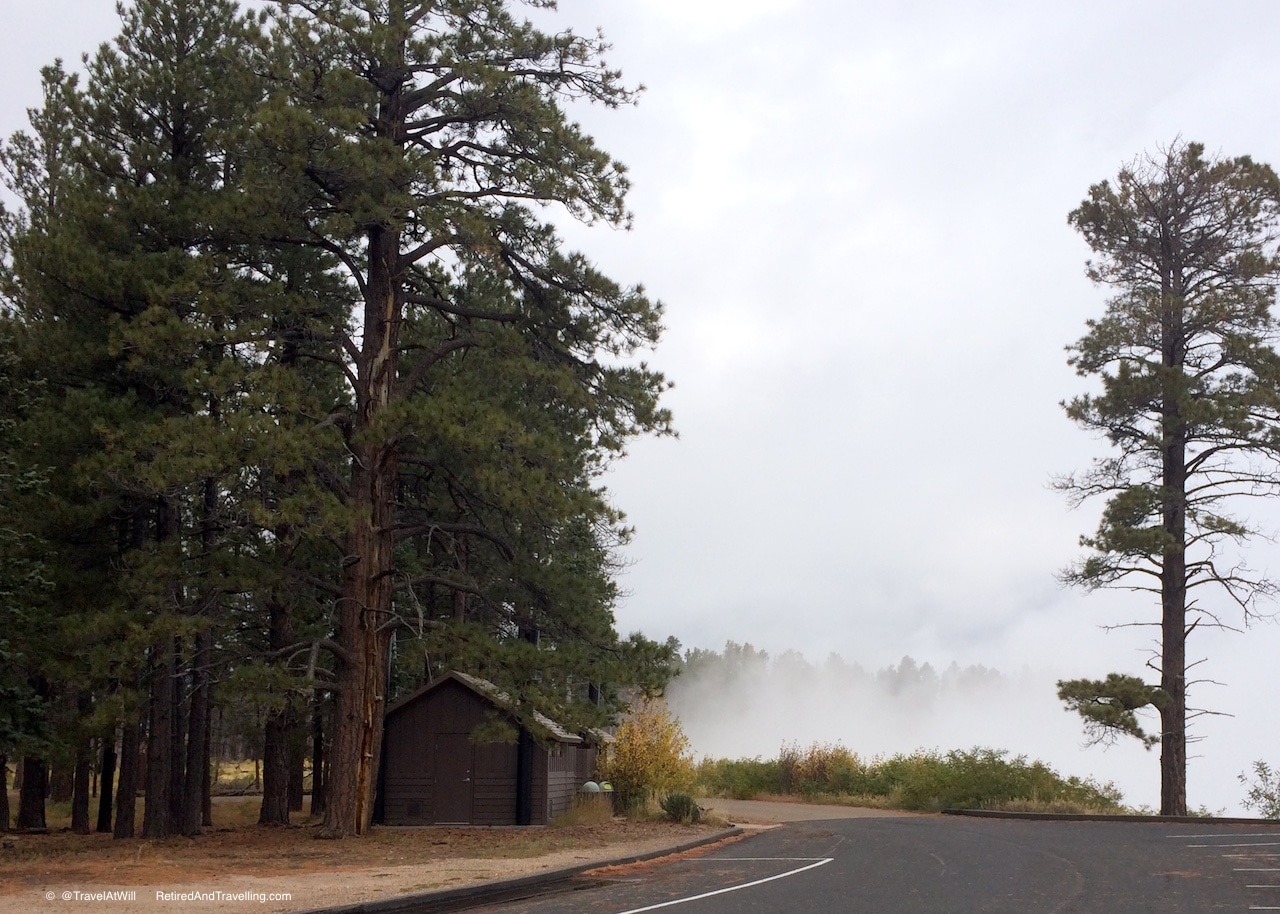 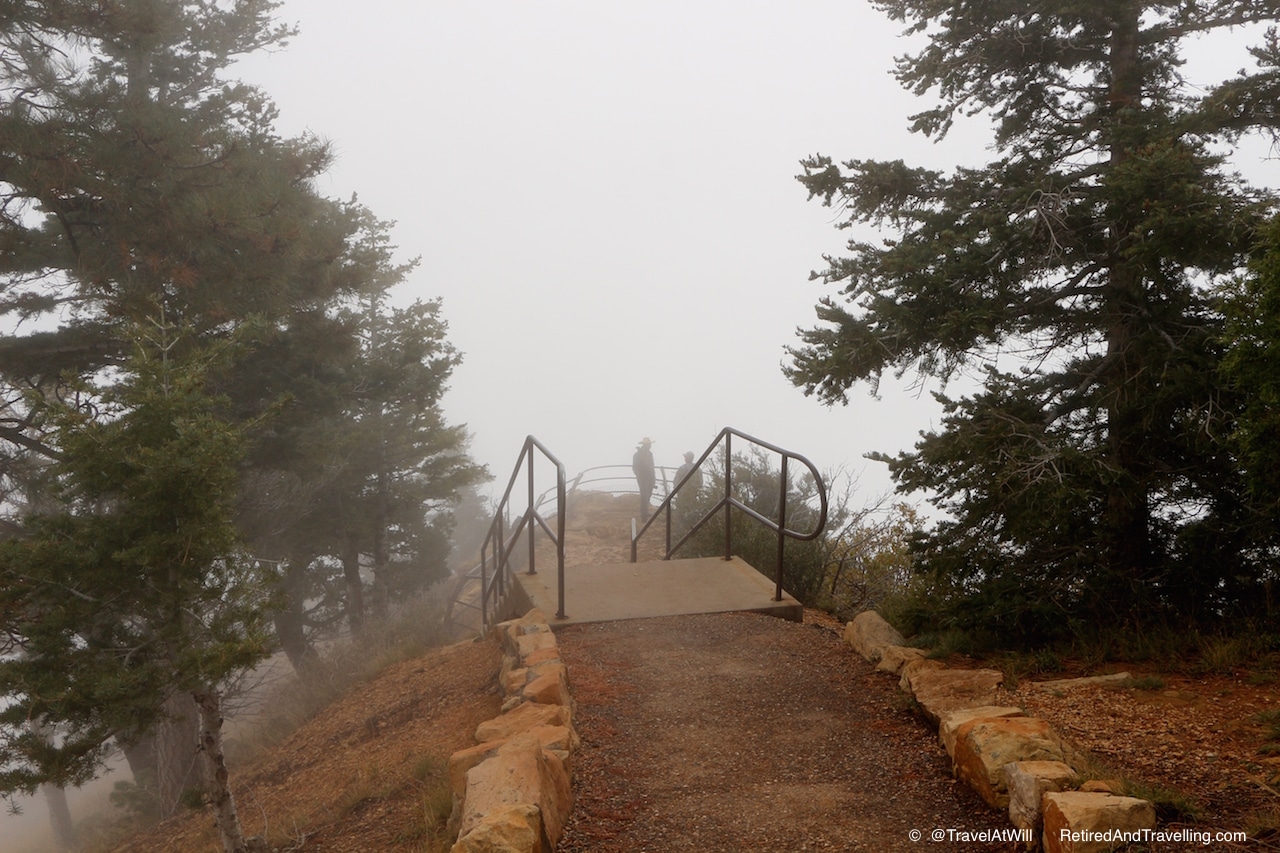 Once parked, we looked out and saw nothing but cloud. If we stood still we could see just the tip of one peak in the clouds. 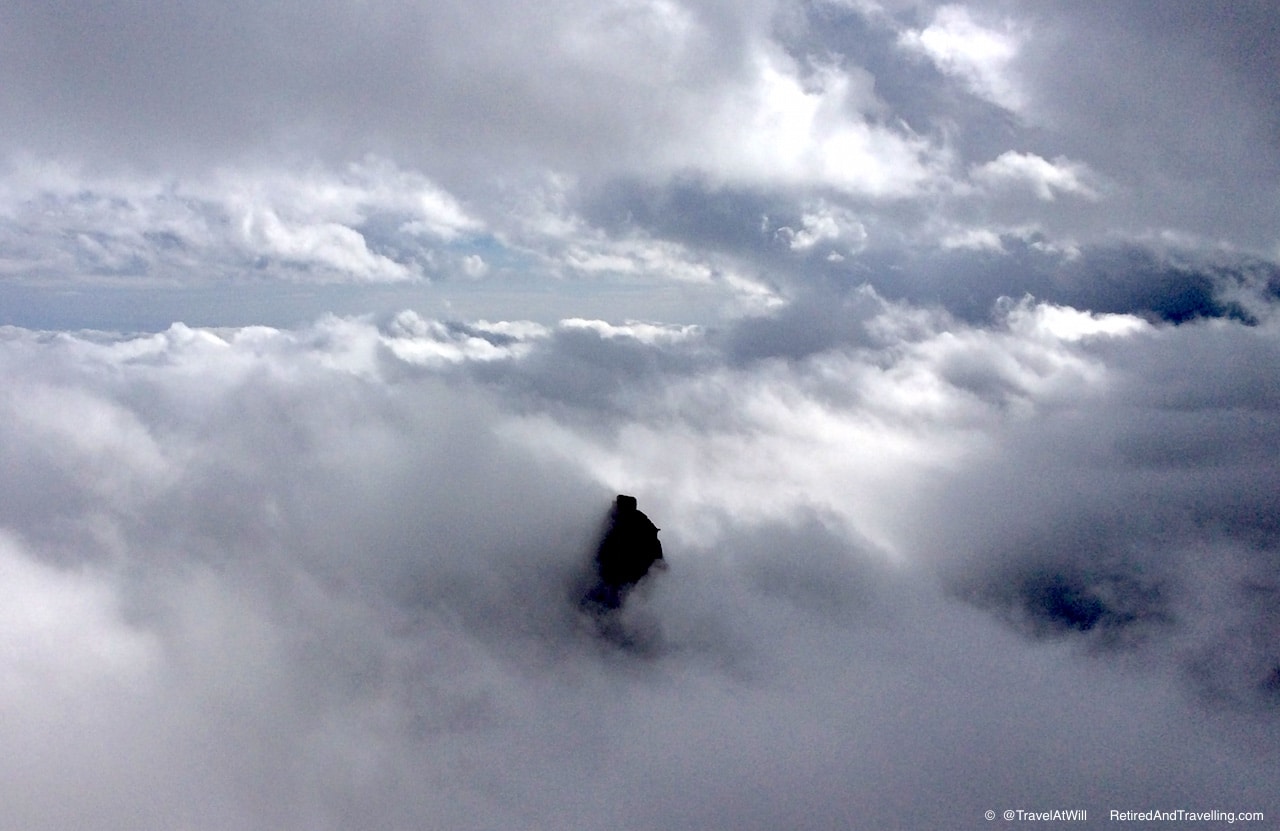 As we waited, we saw the cloud swirling in and out of the valley. And hoped to see more of the view from this highest point on the north rim. 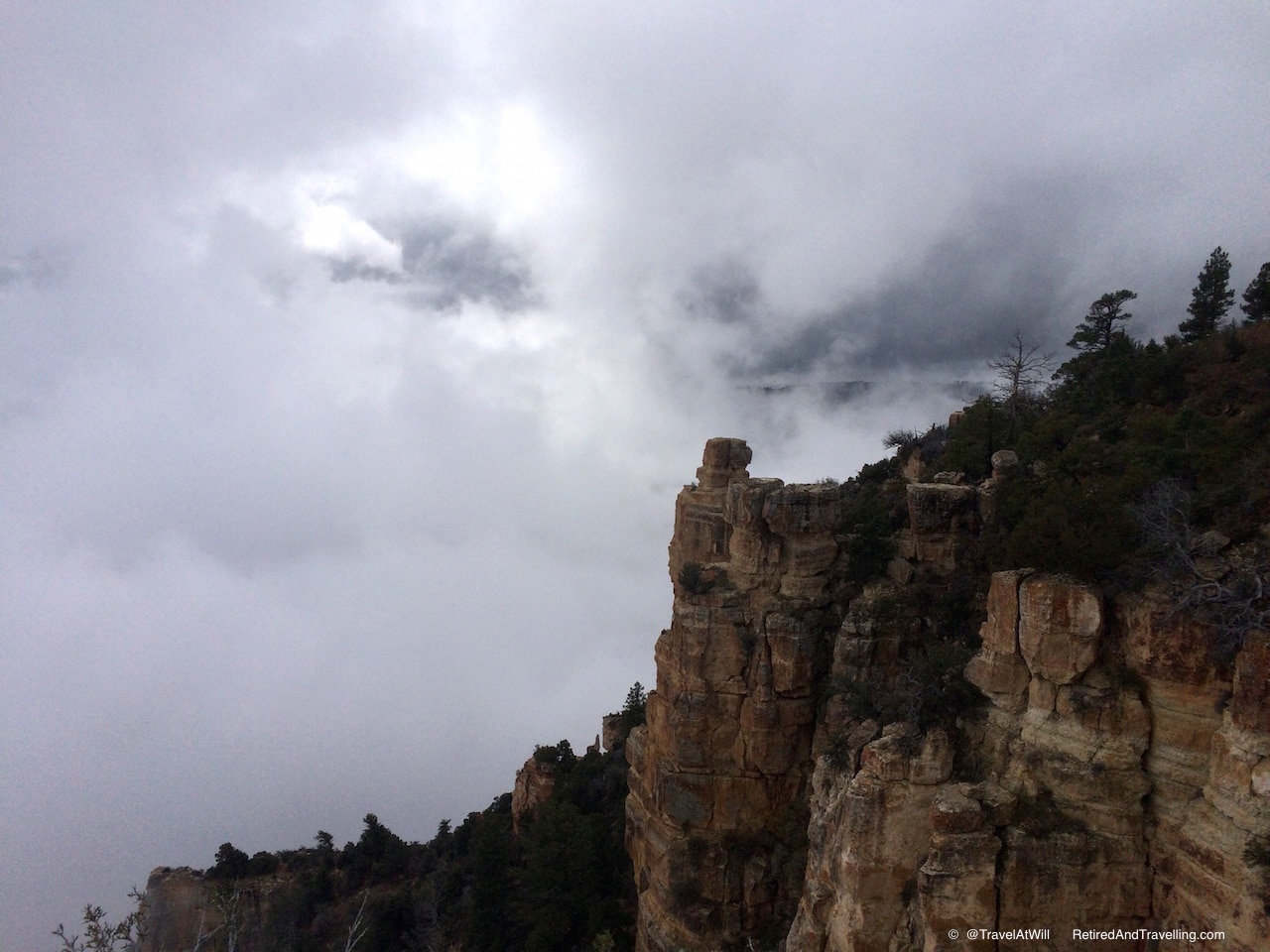 But not deterred, we headed off deeper into the park to Cape Royal. Getting out we were worried that the fog would again steal our view. 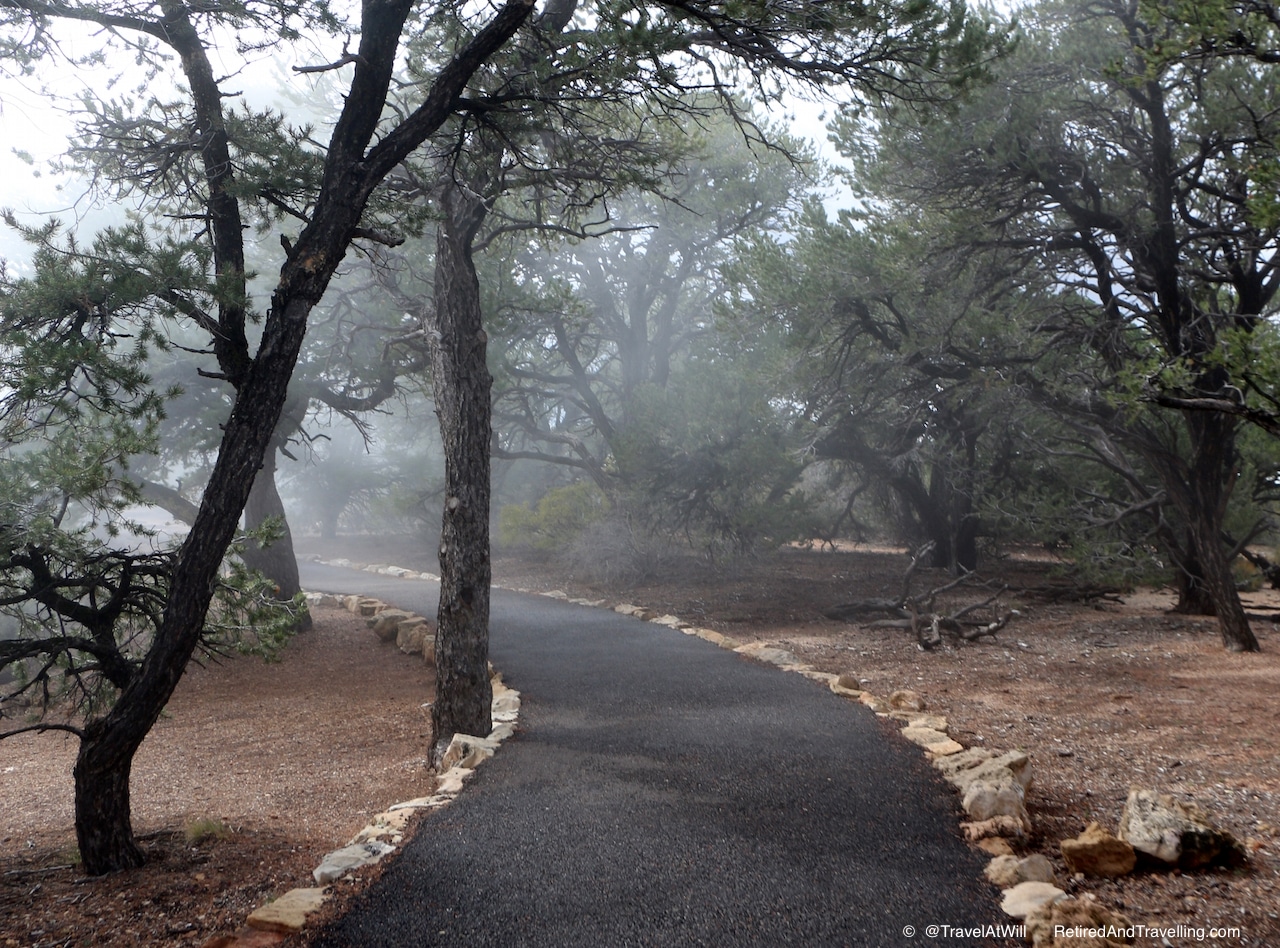 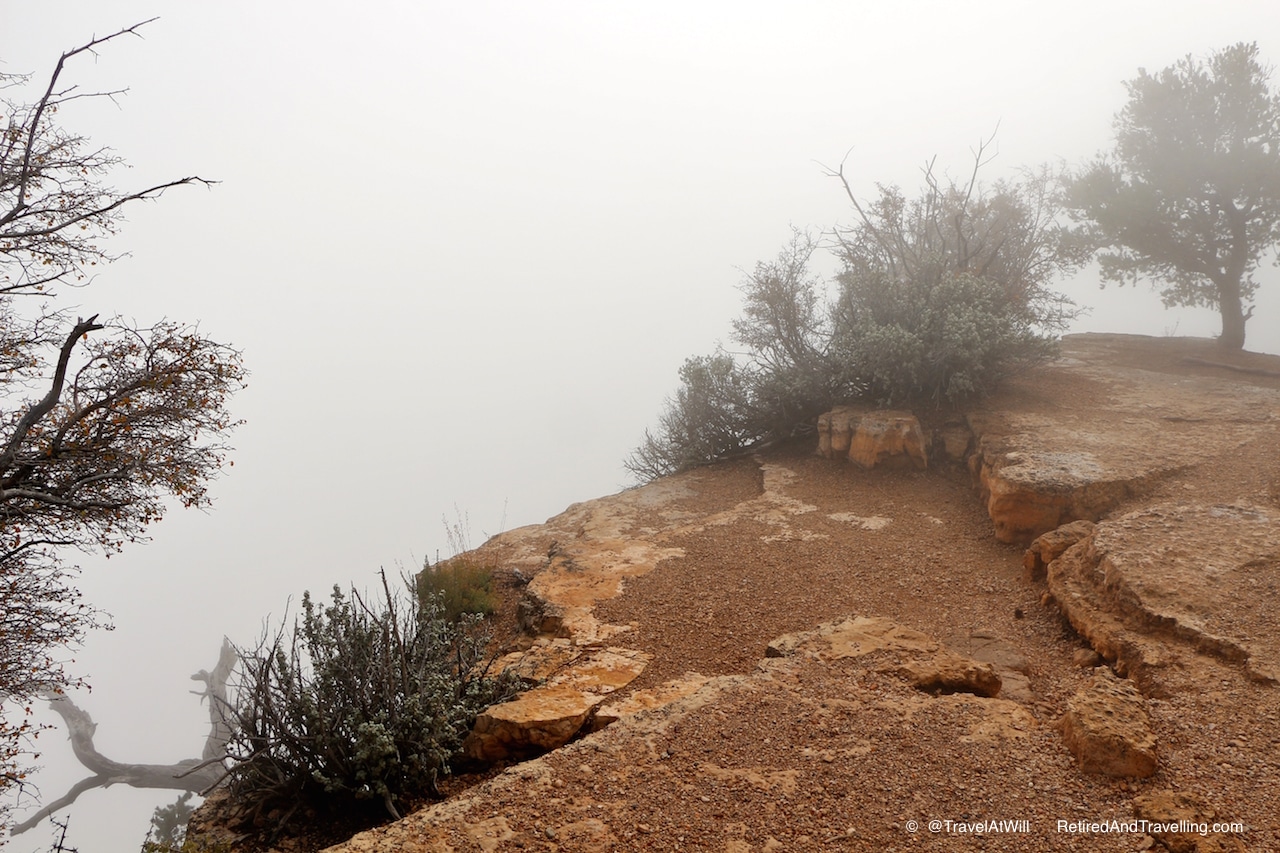 But we set off along the trail, pointed at the place where we saw blue sky. We were not disappointed. From several points we saw different views of the sharp steep rocks on this north rim. The colours of the Grand Canyon shone bright when the sun peaked from behind the clouds. 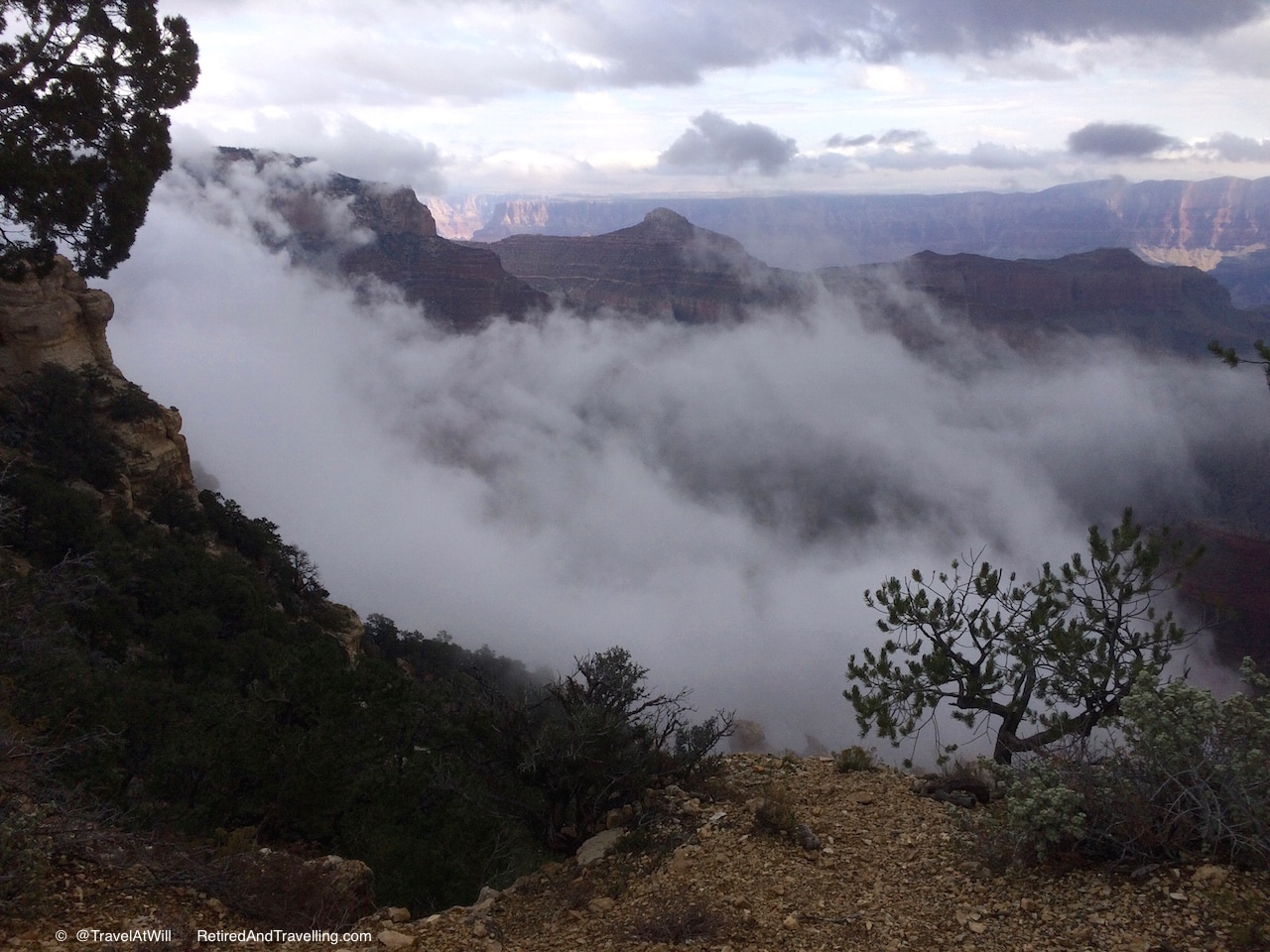 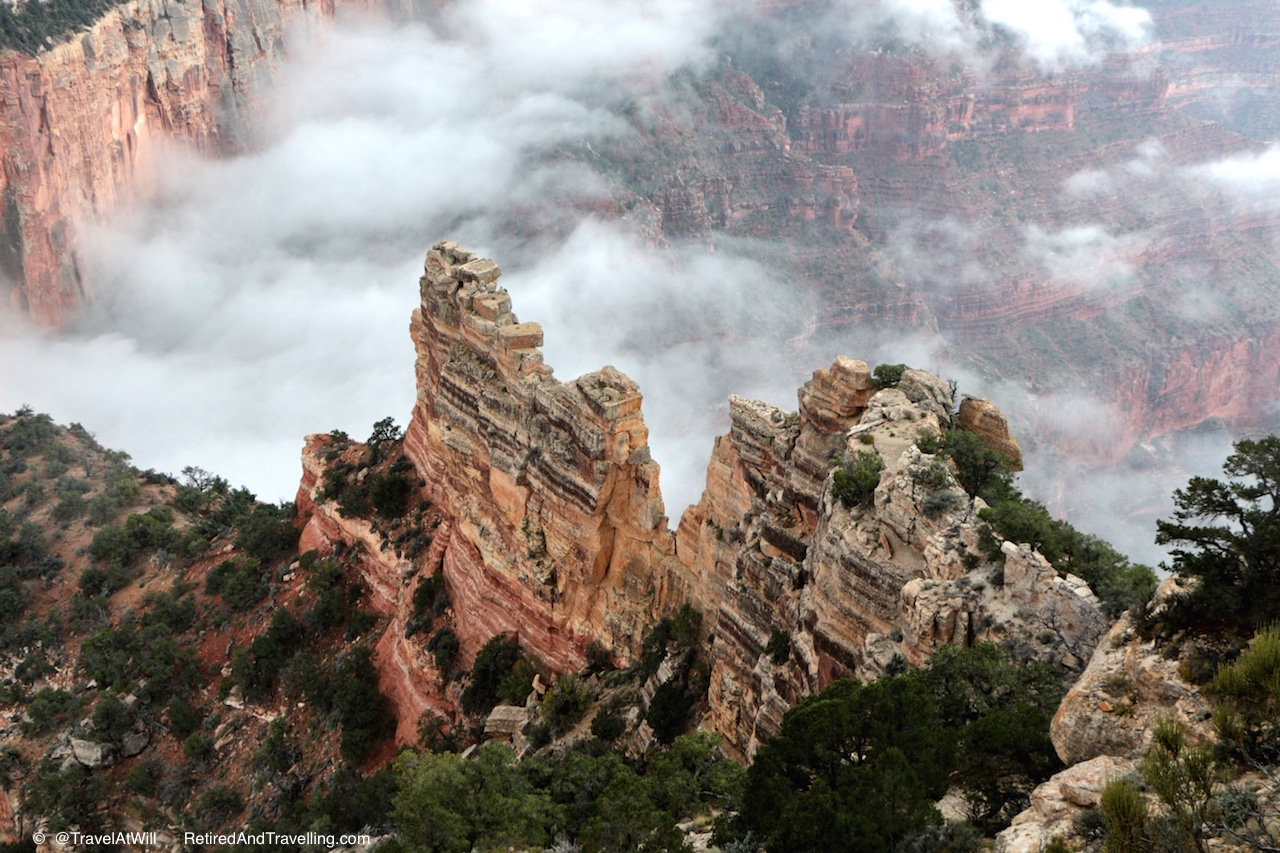 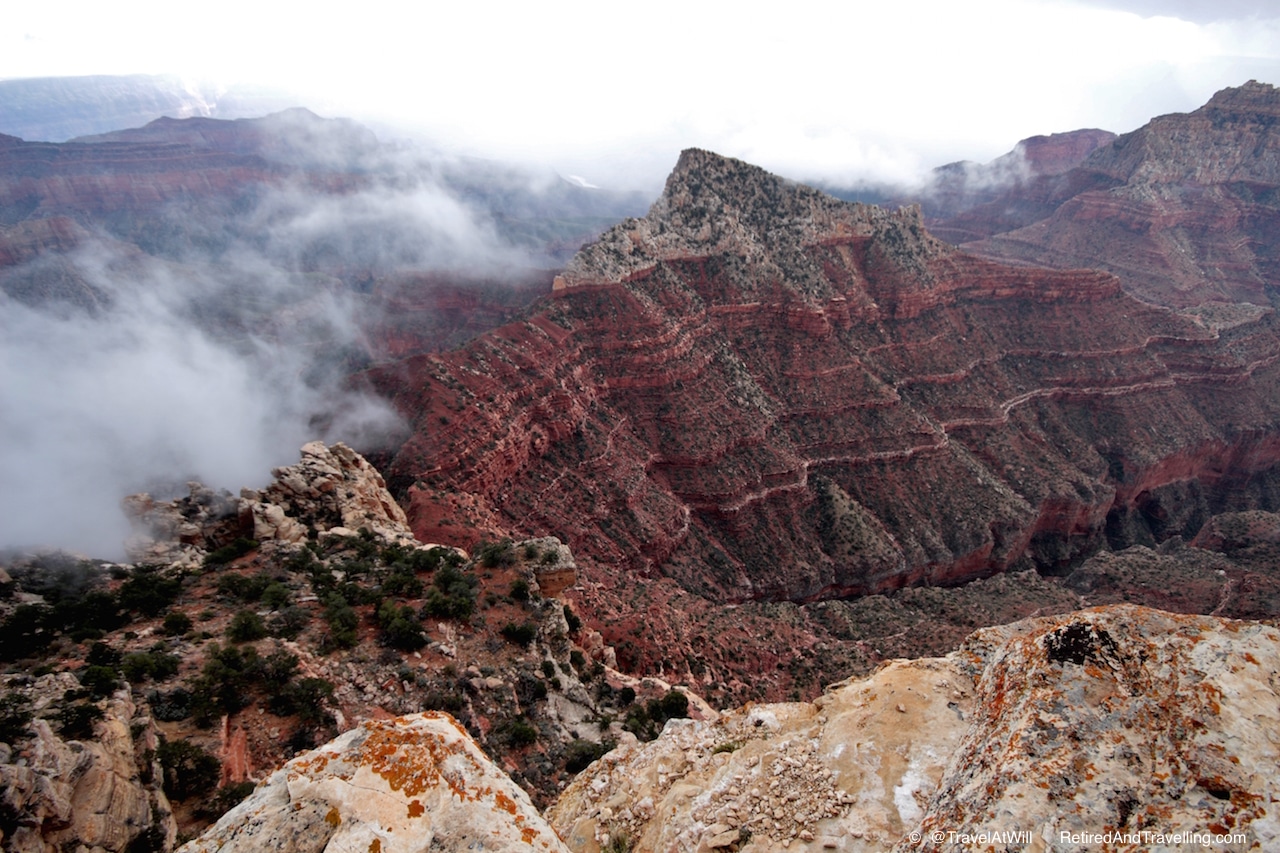 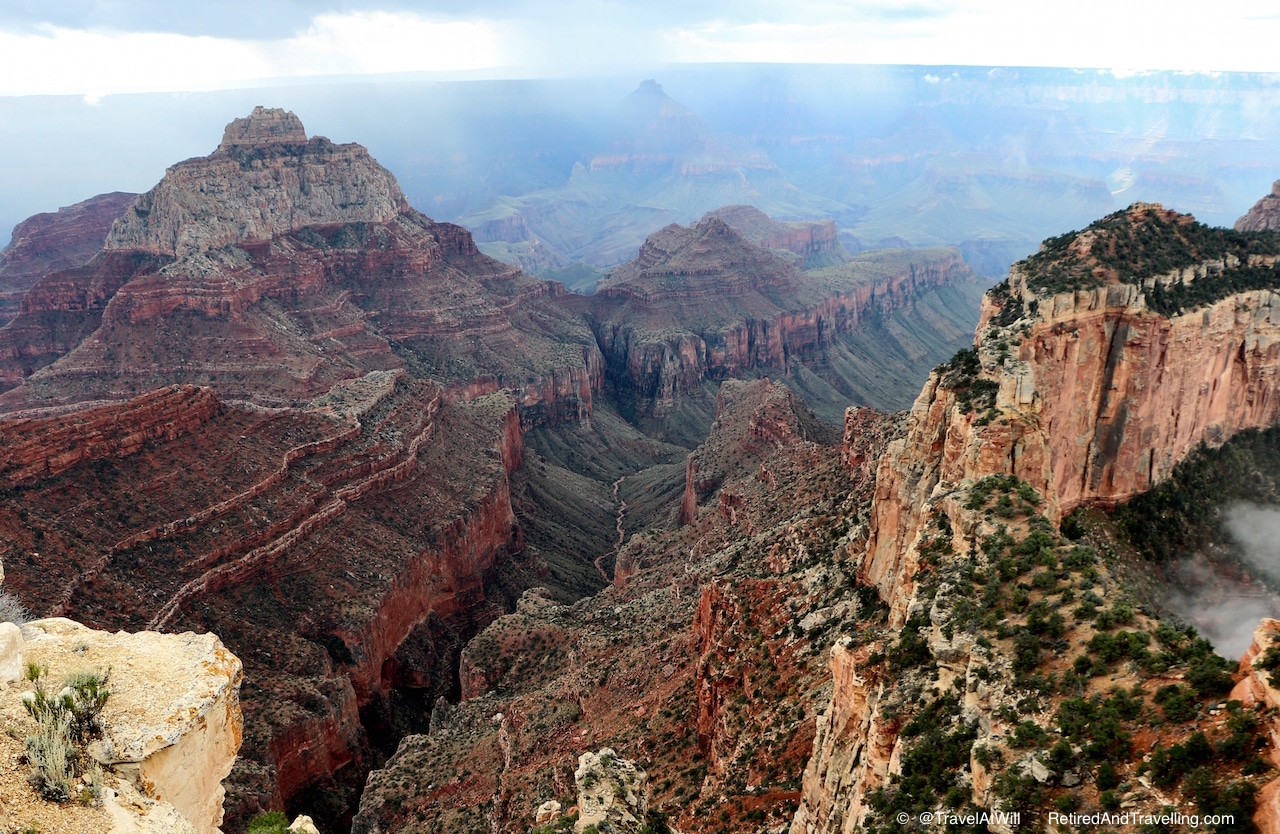 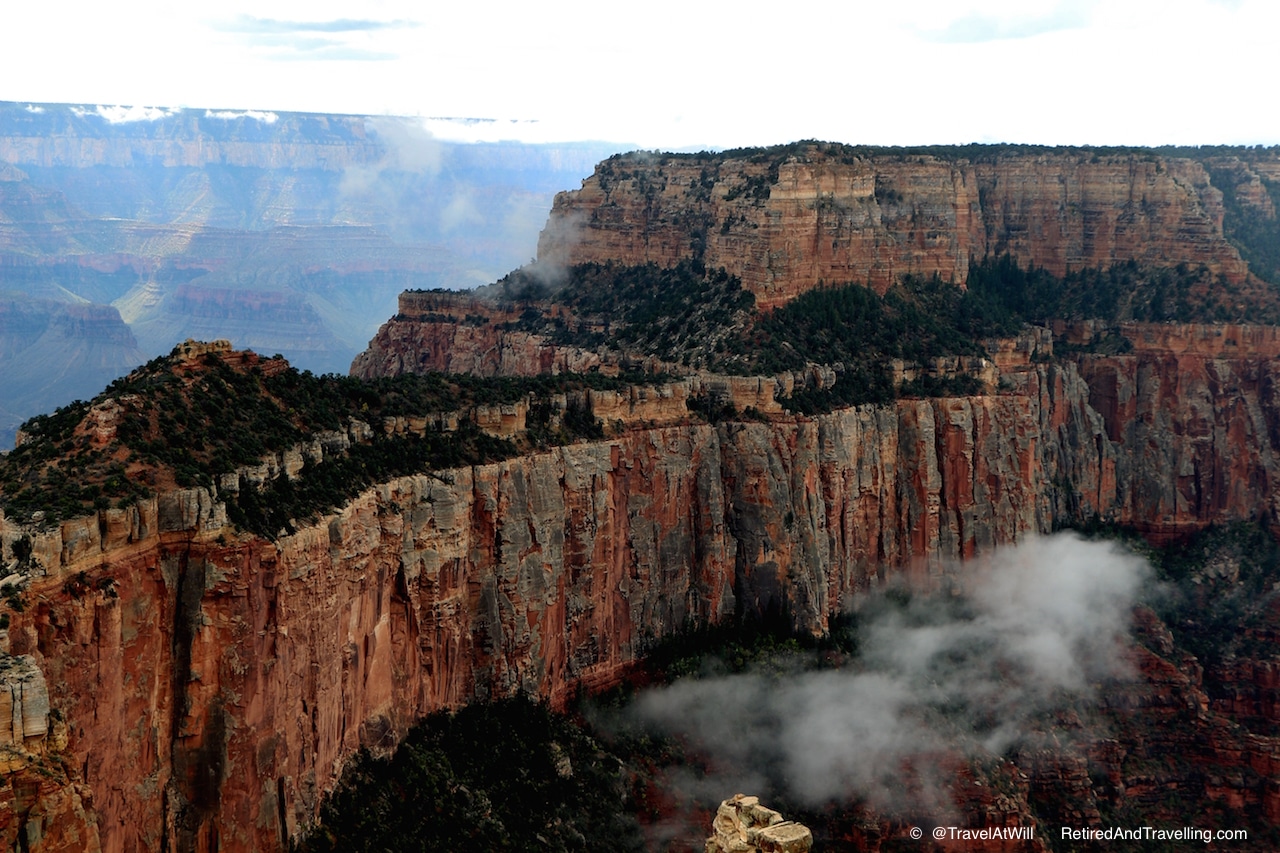 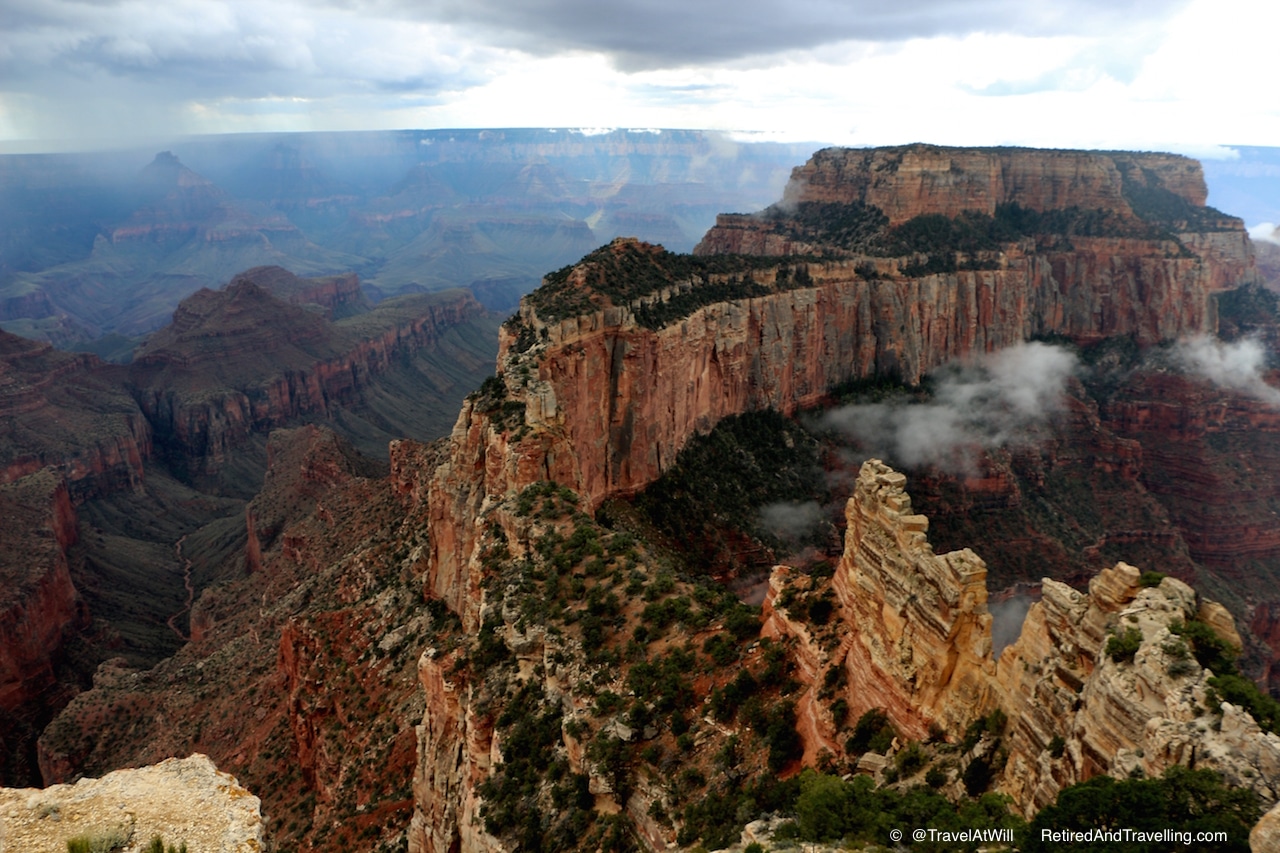 From two different points, far down below in the sharp valleys we saw the Columbia River. 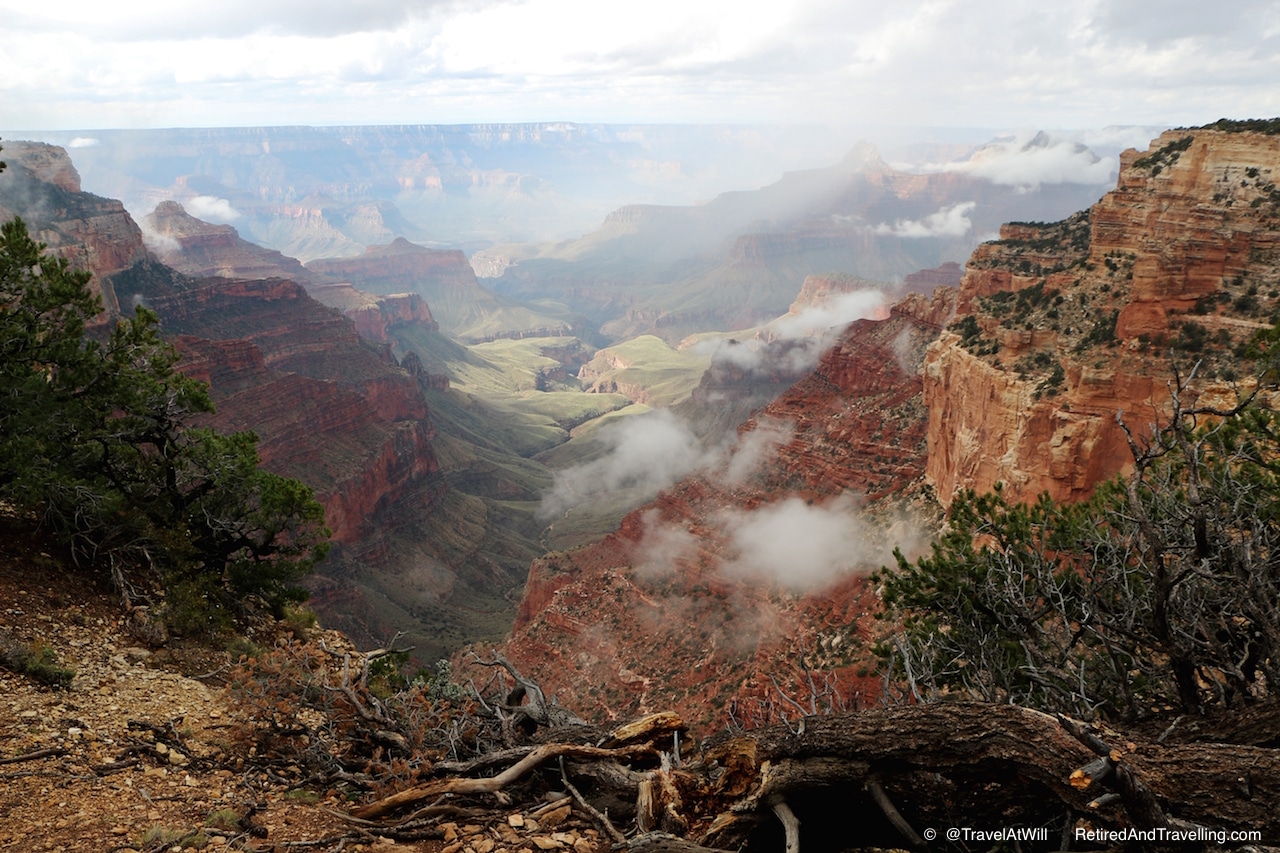 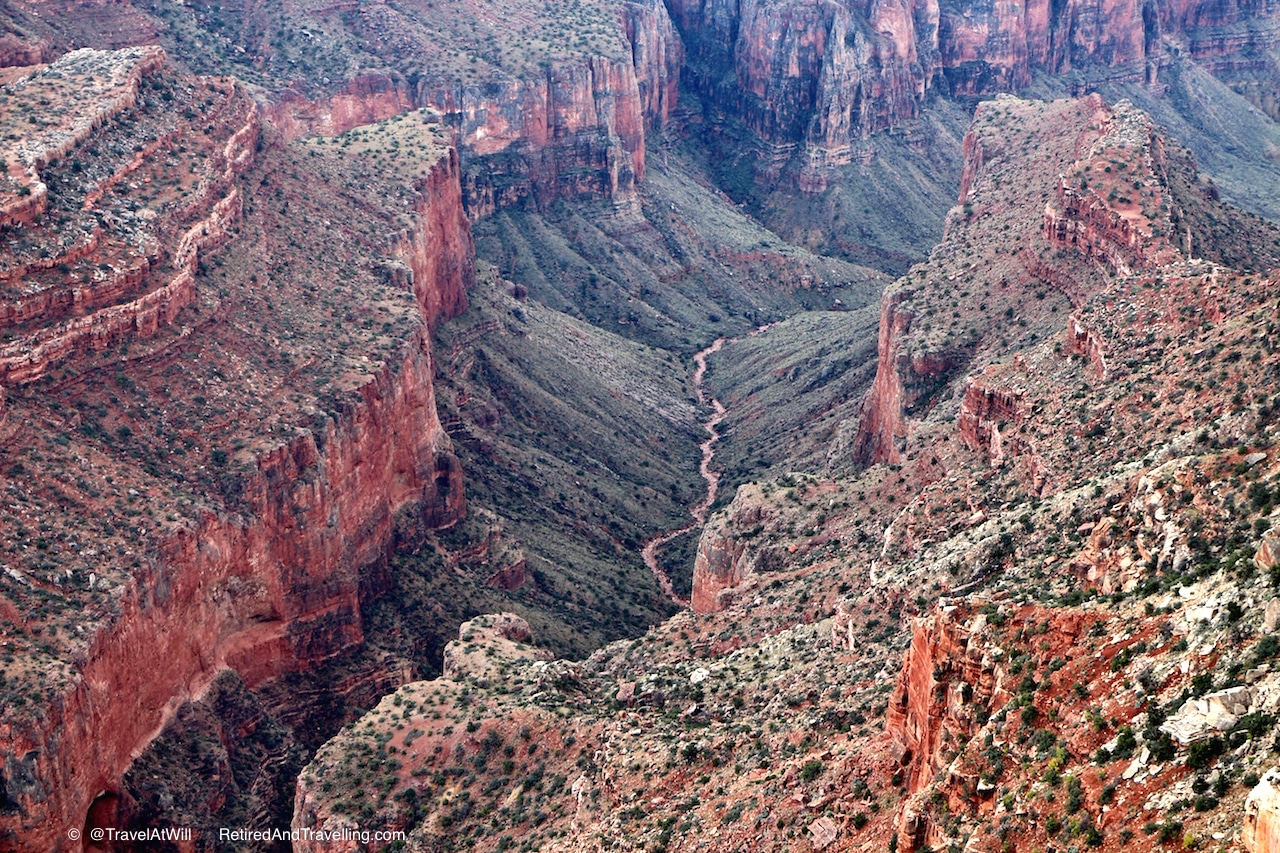 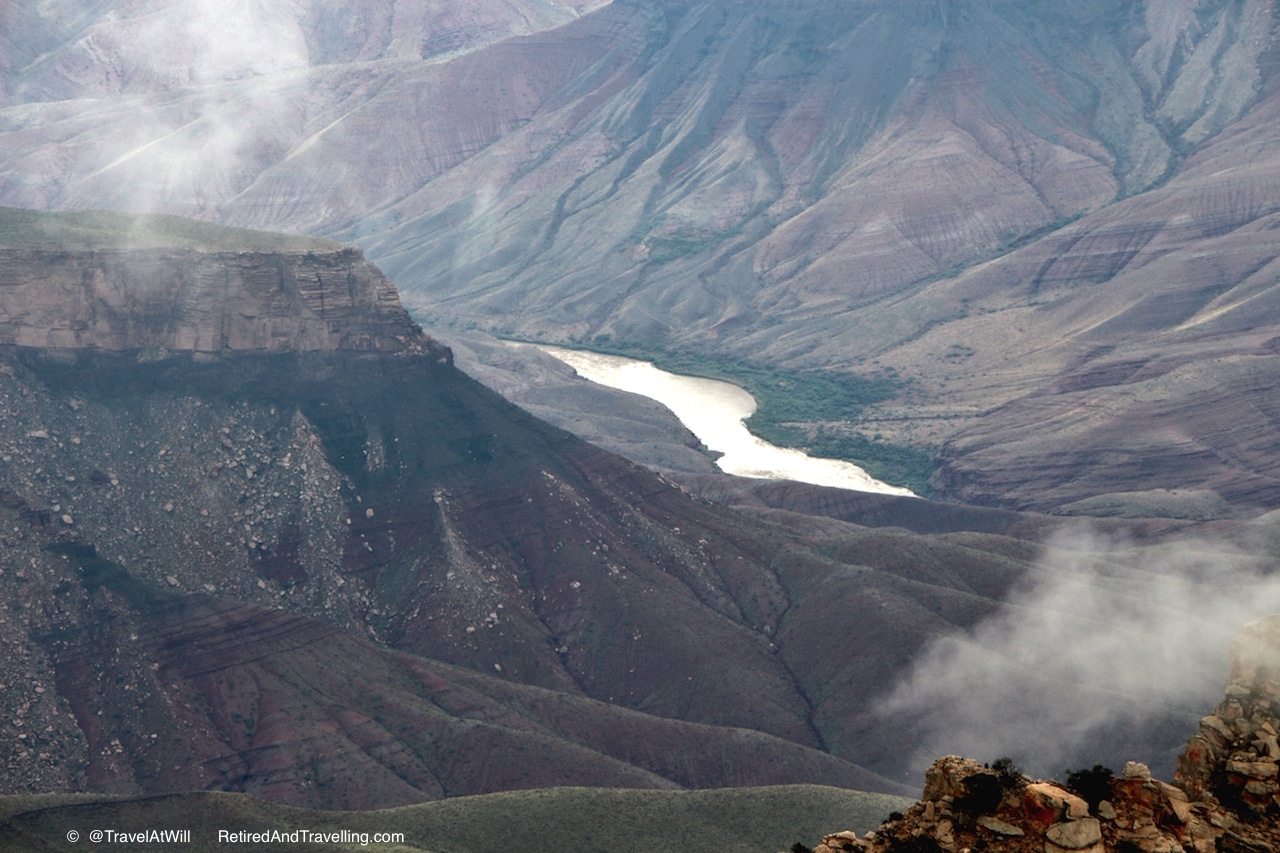 Everywhere we looked we were amazed and glad we started with this Grand Canyon North Rim Surprise! We left totally in awe, fully believing that starting here was the right idea. And worth the extra detour that so many people do not make. While the weather was not totally bright and sunny, we got some interesting views of the north rim as the clouds moved in and out.

We headed for the 5+ hour drive to get to the Grand Canyon South Rim. It was a good thing that we had planned to stay over night! 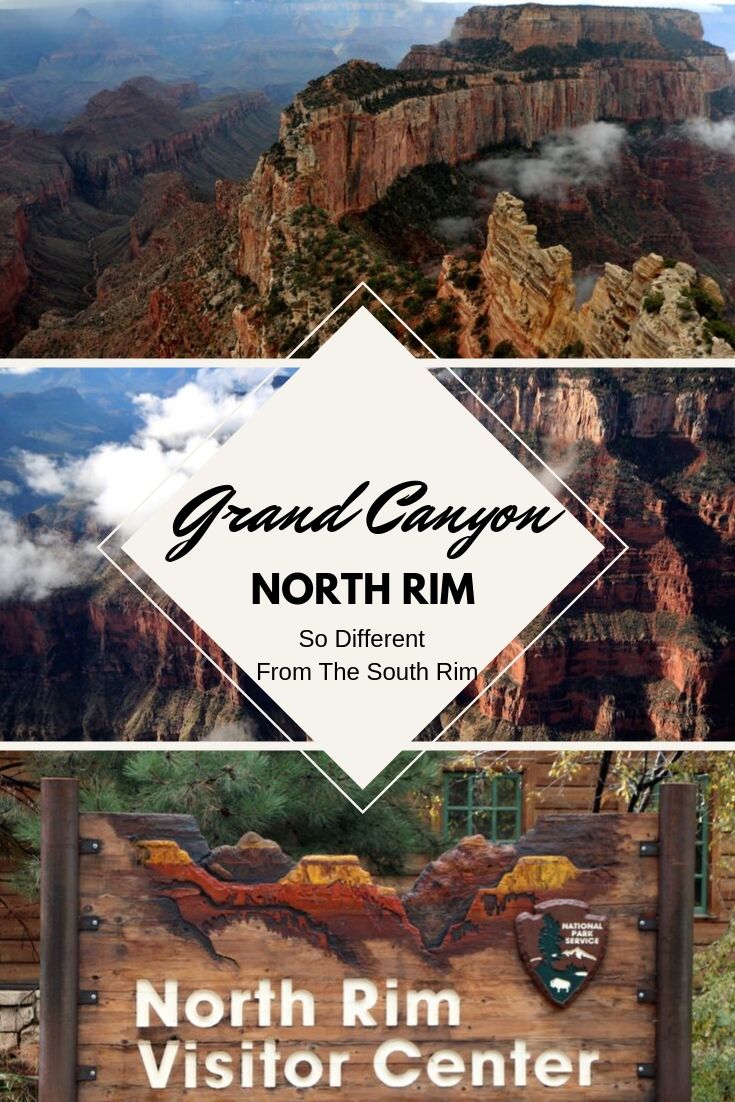 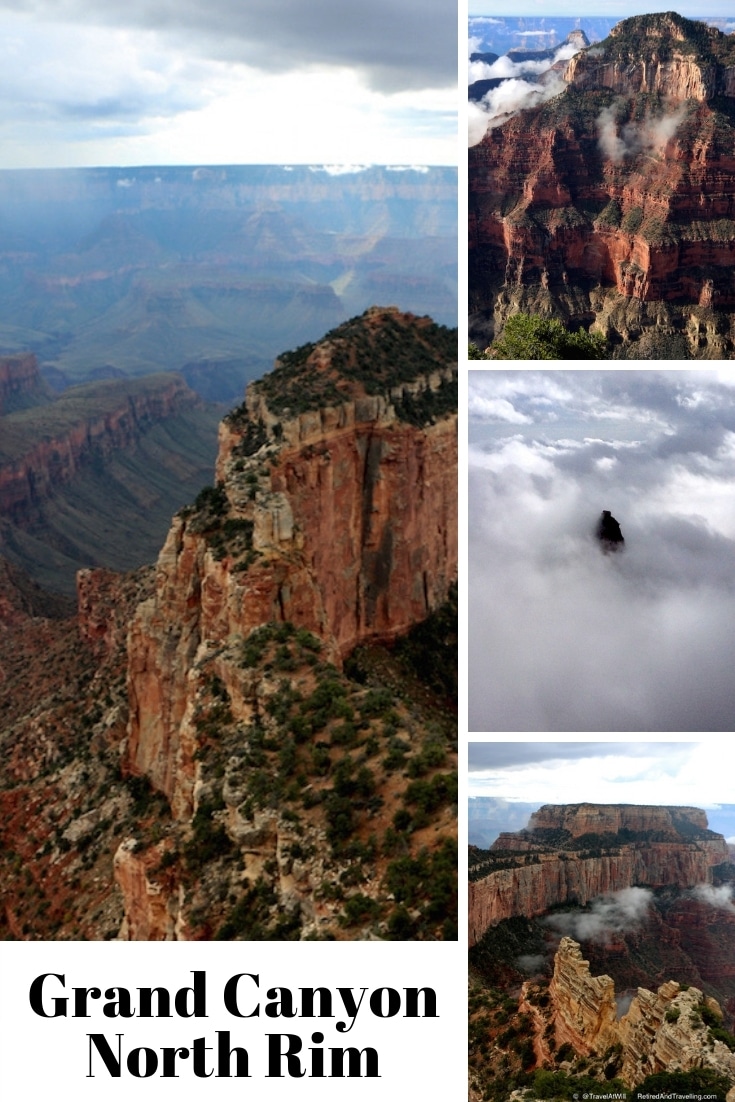