We planned to take a day to explore the coastline south of Pescara and see how coastal forts protect the Adriatic Coast as far as Vieste in Puglia. After we finished our week in Pescara, we were headed to Lecce in Puglia for our next stop.

The drive to Lecce was long.  So we knew we would not take the more scenic route along the coast the whole way. This day trip south ensured we experienced the slower coast trip. Our hotel concierge, waxed poetic about the coast and the things to see. He gave David driving directions and stop suggestions.

For our second stop on the Adriatic coast, we originally booked a hotel in the beach town of Francavilla Al Mare. We checked out where we might have landed if we had not cancelled the hotel in Francavilla for a place in Pescara with real air conditioning. This was not quite as deserted as we had found Igea Marina.  But the hotel north of the train tracks on the far end of town may not have been ideal. I guess that happens occasionally when picking hotels from the internet.

Continuing down the coastal road brought back memories of the June trip we did along the US west coast.  We stopped a few times and looked at the beach along the shore road.  But we had a few specific stops targeted for this trip –  Ortona, Termoli and Ischitella.

We were off to see how the coastal forts protect the Adriatic Coast.  Winding our way up the hill got us to Ortona, the first town on our list. We found a beautifully restored castle fortress that prominently stood guard over the town. 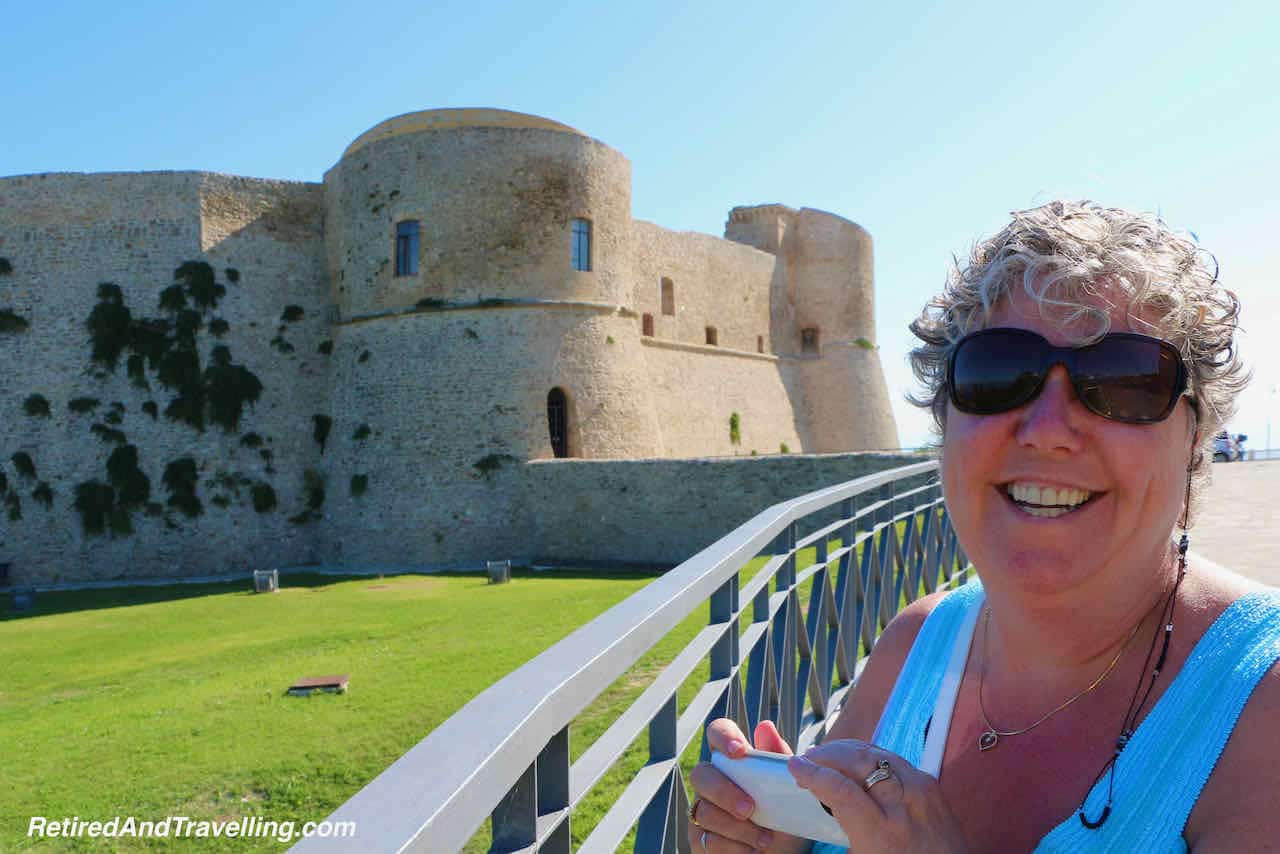 Climbing to each of the four corner towers, we saw how the port could be defended. The panoramic views went down the coast almost to Pescara.  On the other side we saw the busy working port. We marvelled at how clear and blue the water got as we moved each step further south. 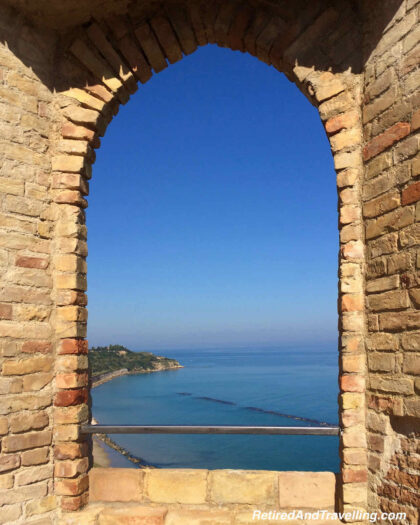 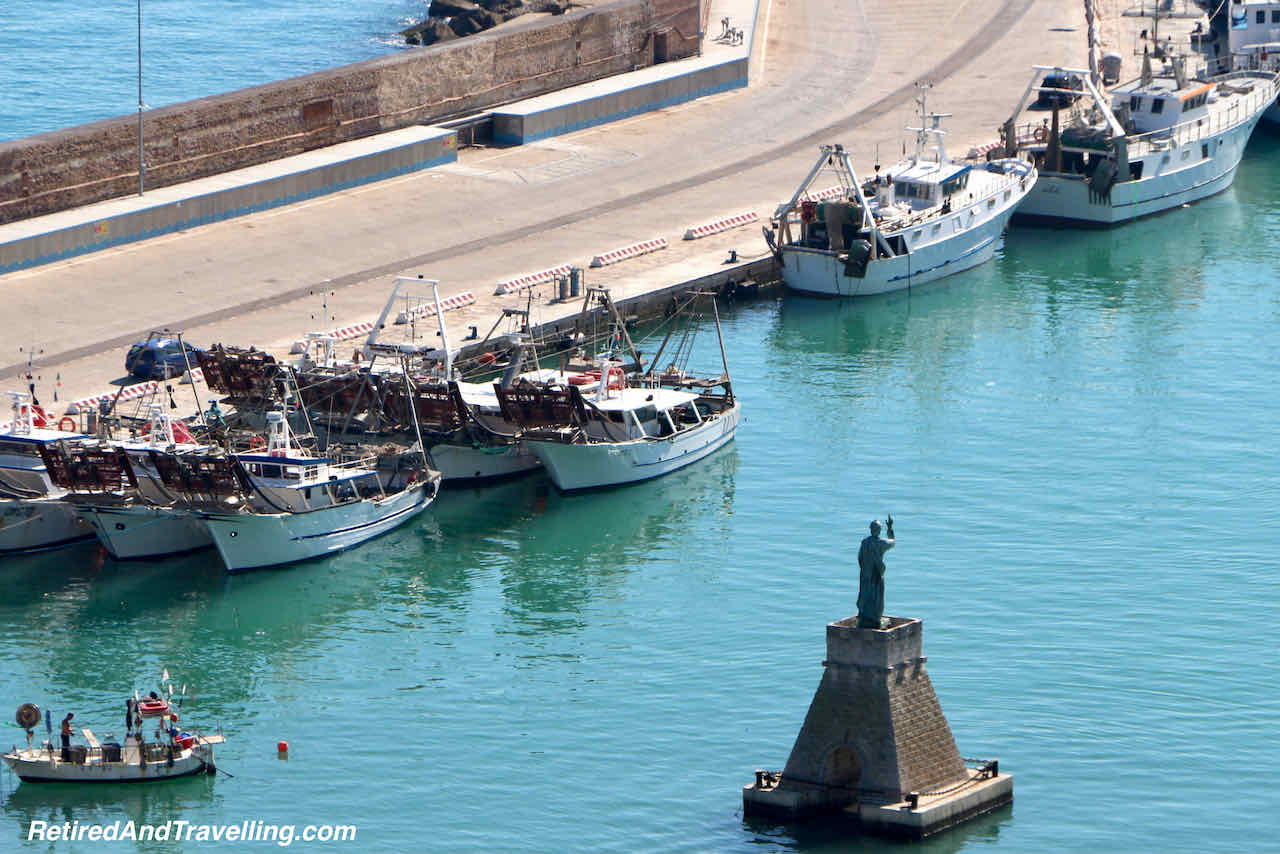 Moving into town we found the Cattedrale di San Tommaso. From the outside this church looked newer.  When we went inside we found a plaque that talked about the restoration. Like many of the other towns along this shore of Italy, many of the older sites suffered extensive damage in WW2 or in one of many major earthquakes. We really had not appreciated how widespread and catastrophic the earthquakes in Italy had been. 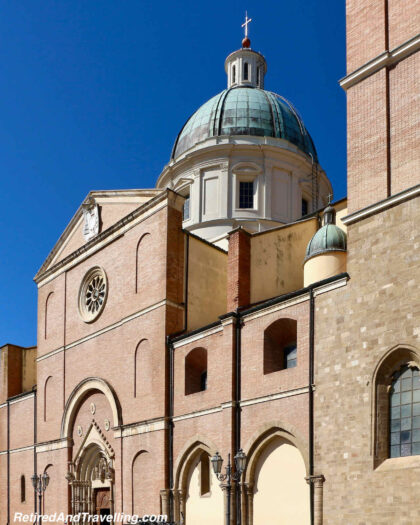 This church was surprisingly beautiful inside and included a separate tomb area for the Apostle Tommaso. Several of the stained glass windows were simple and stark but striking. 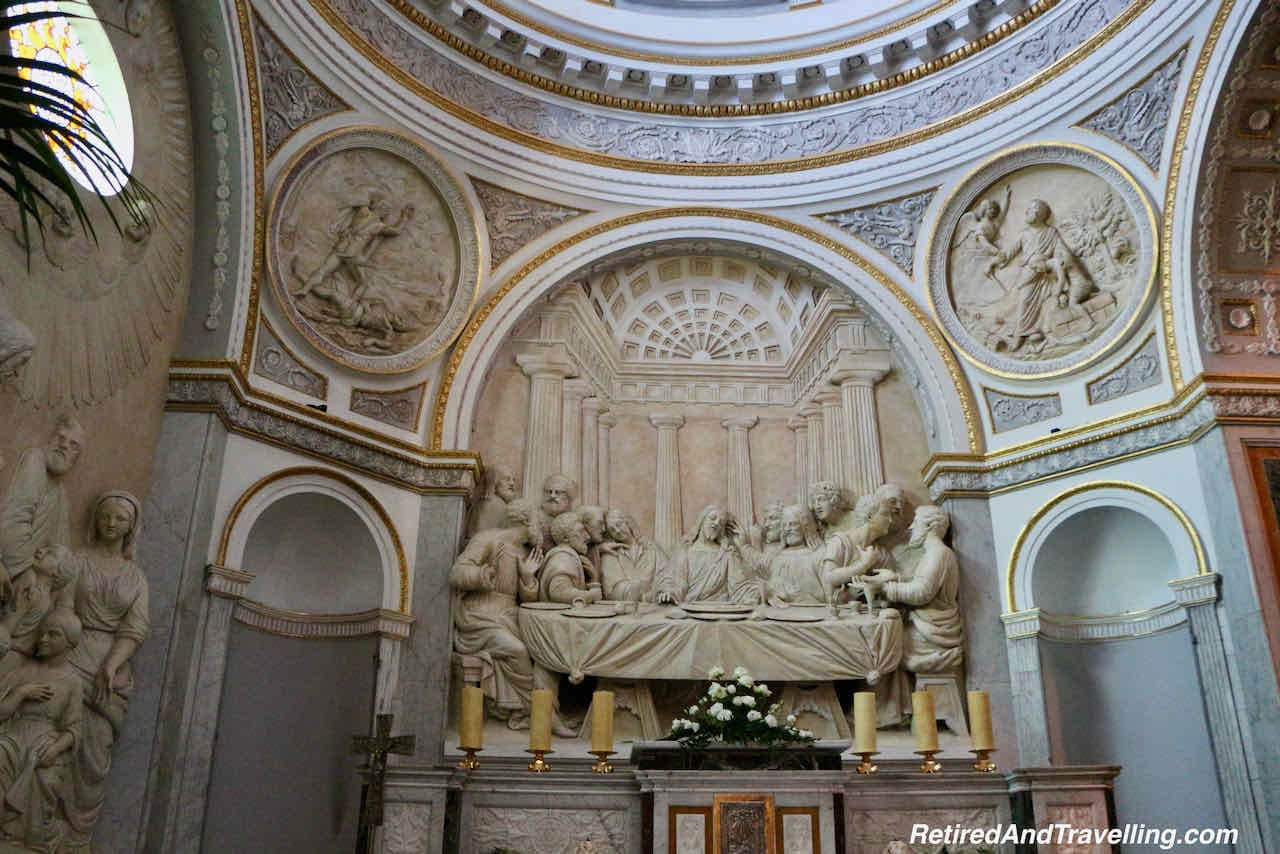 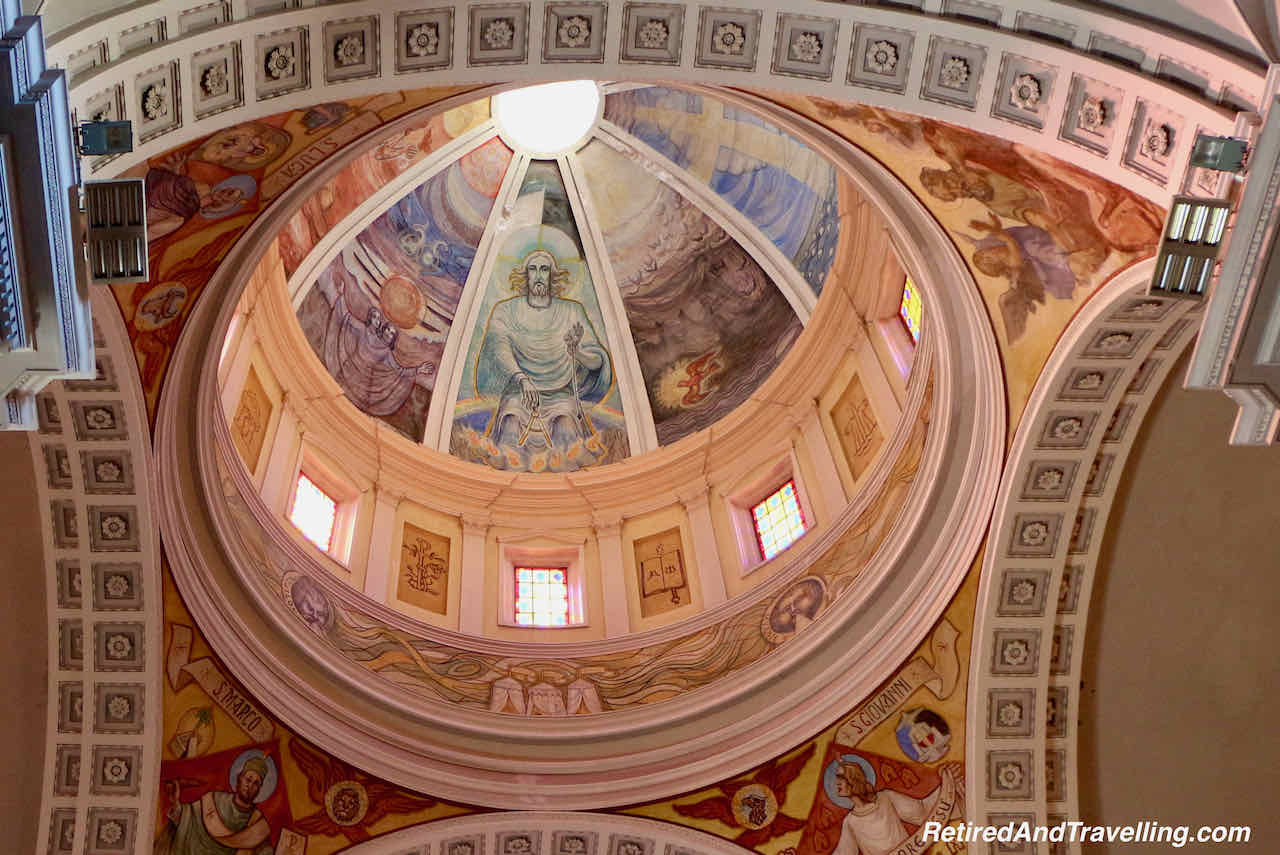 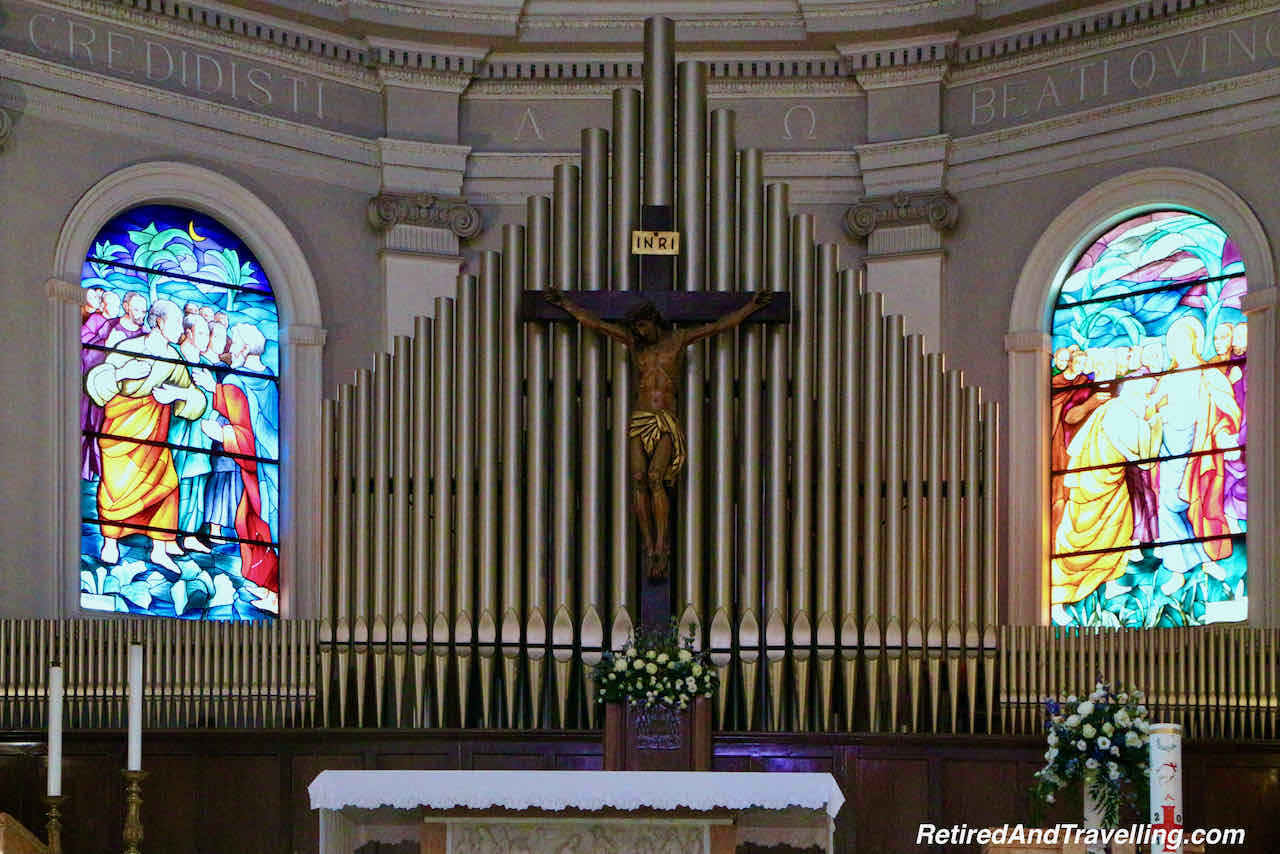 Another Canadian War Memorial In Ortona

As we headed back to the car, we saw yet another Government of Canada plaque and statue.  We got our first taste of the Canadian presence in this part of Italy when we visited Rimini on our stay in Igea Marina.  This memorial represented the battle to reclaim Ortona. There was also apparently a large cemetery in Ortona with buried Canadians that we missed. This was a common stop for people visiting ancestors. 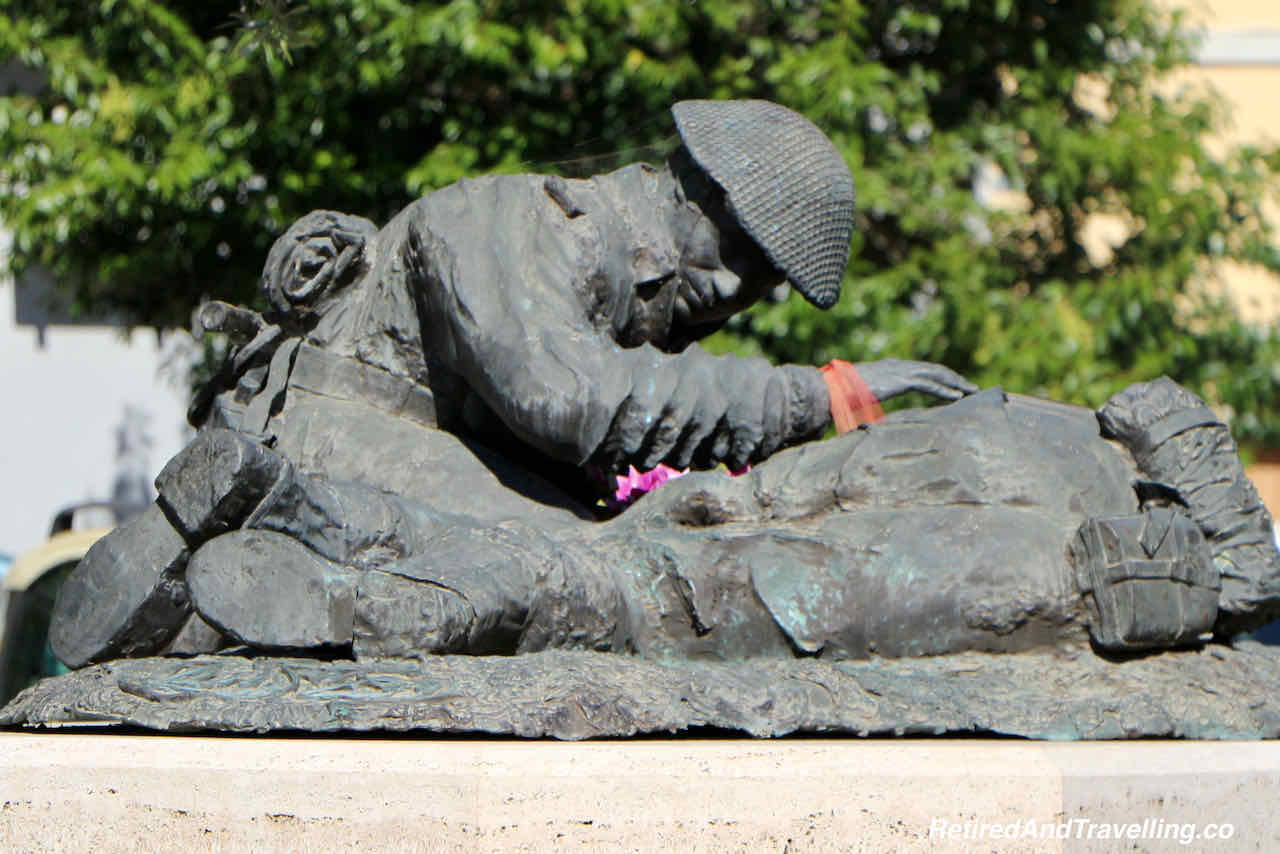 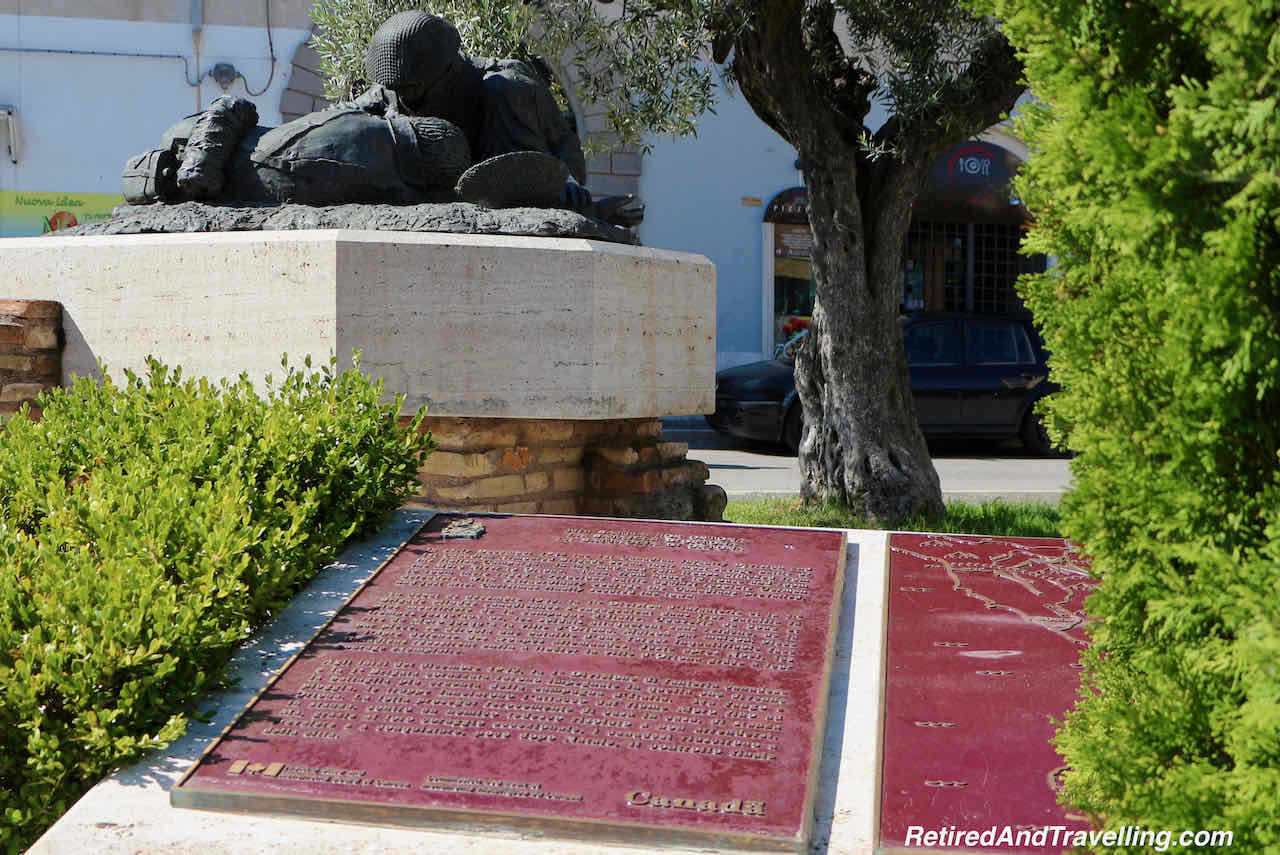 Termoli By The Sea

This first stop along the coast road took well over 2 hours. At this rate we would not get far! So we decided to hop on the autoroute and made some progress down the coast. We left the province of Abruzzo and entered the province of Molise.  Soon  we hit our next target destination Termoli.

This exit presented us with our first toll booth trial. With no FastPass, we needed to find the line for cash.  At this toll booth over lunch hour there appeared to be no option for us to exit. Since the FastPass lanes had gates, we would not even have been able to go through and hope a toll (with a car rental company userous handling fee tacked on) showed up at some future date on our credit card. We pulled over to ponder and finally pulled into a cash booth with a red light. This apparently woke up the one toll operator who finally came out and loudly told us he would open to take our cash.

We wound our way up again and found yet one more hilltop fort.  This fort had some walls, two corners and one main gate still standing. 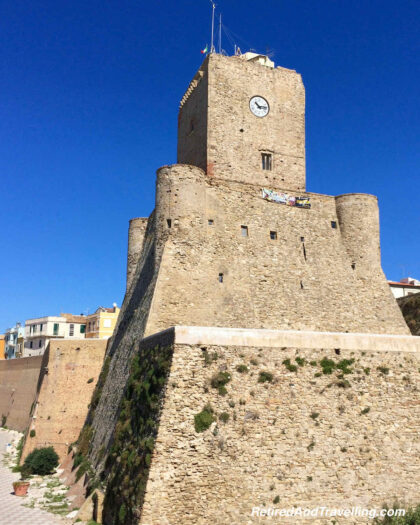 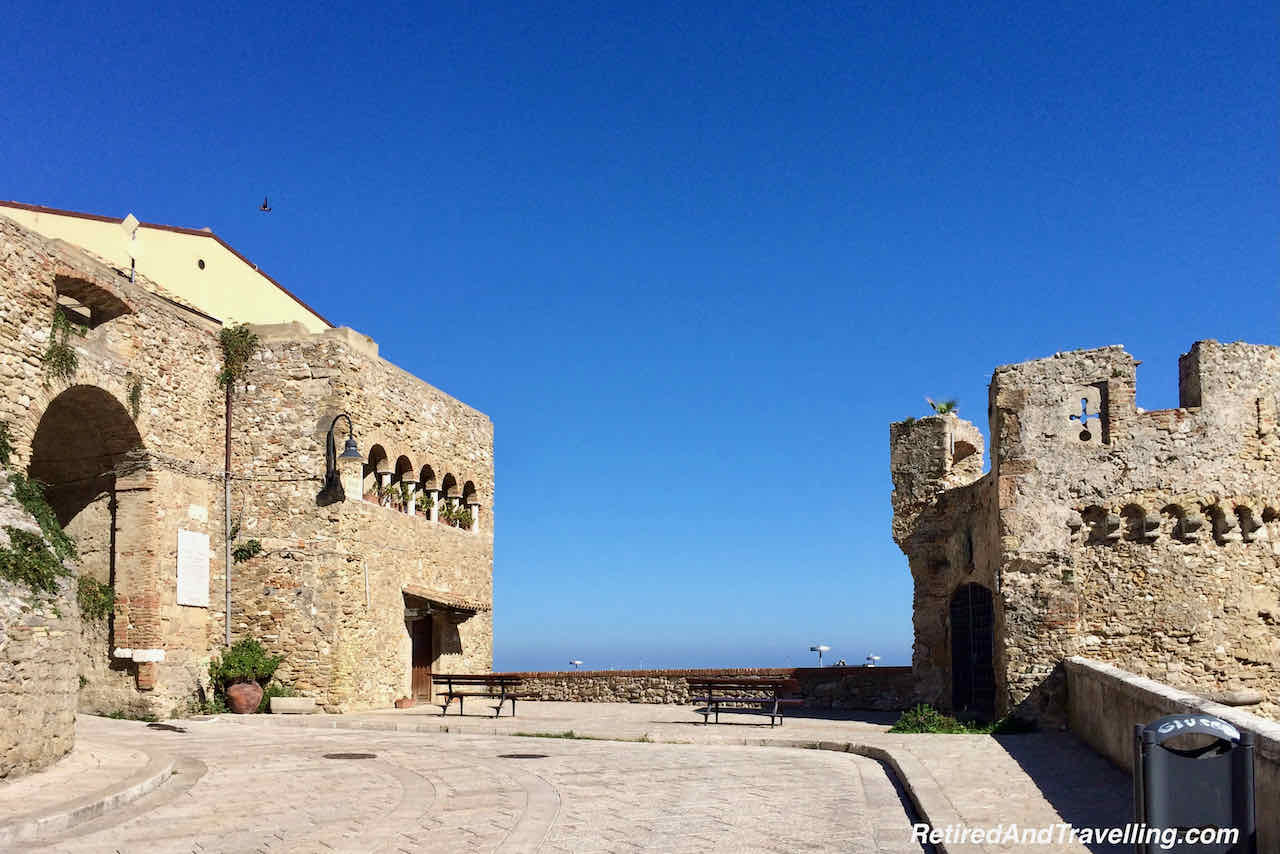 Inside this fort we found the small old town with houses and the obligatory church in the Piazza Duomo. The old church was stone with carvings and an impressive relief copper door.  It was not open when we visited.  So we got no idea of what beauty we missed inside. 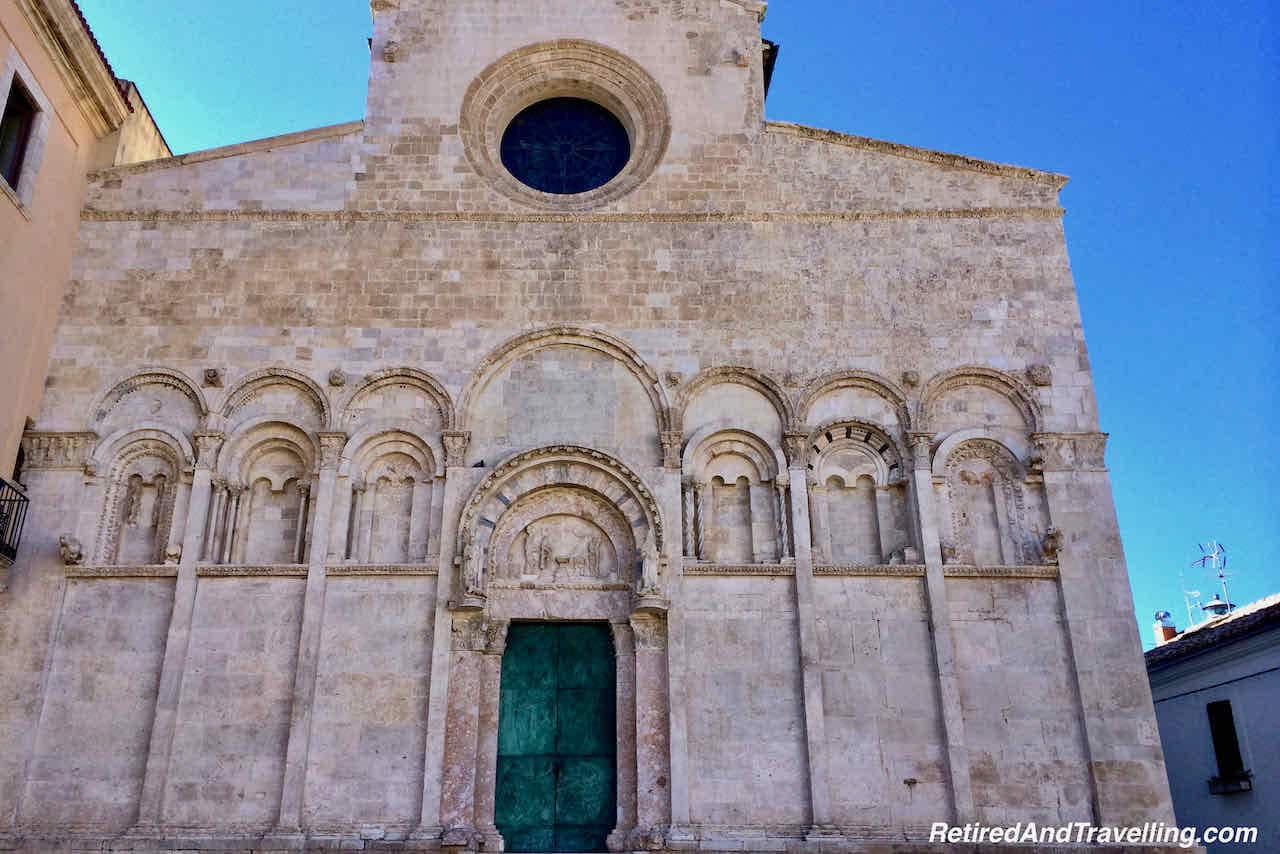 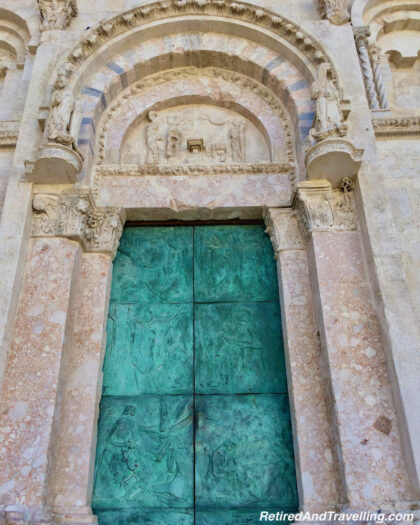 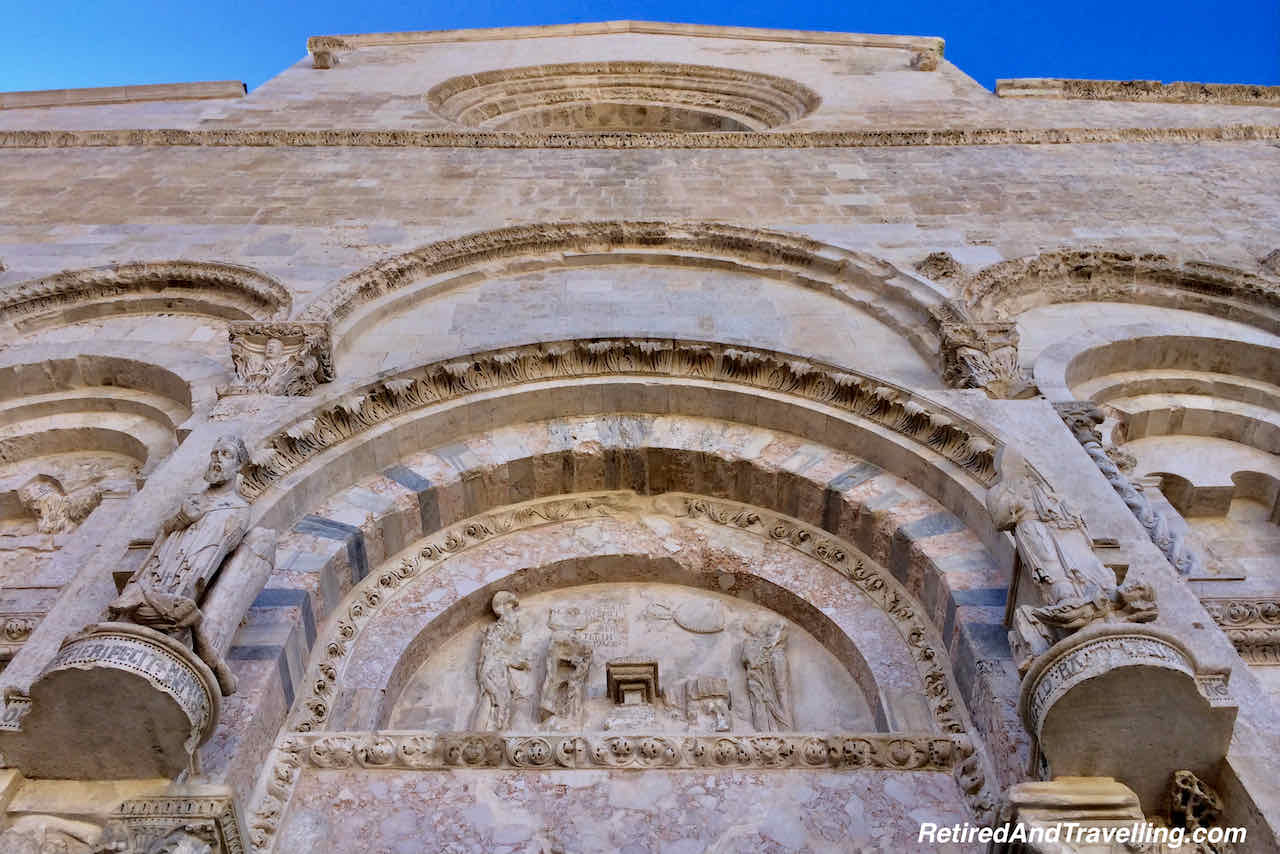 From high on the walls looked out to the beach and the interesting fishing shacks on extended platforms. The water looked inviting.  David was sure it would be great scuba diving along the walls of the fortress. 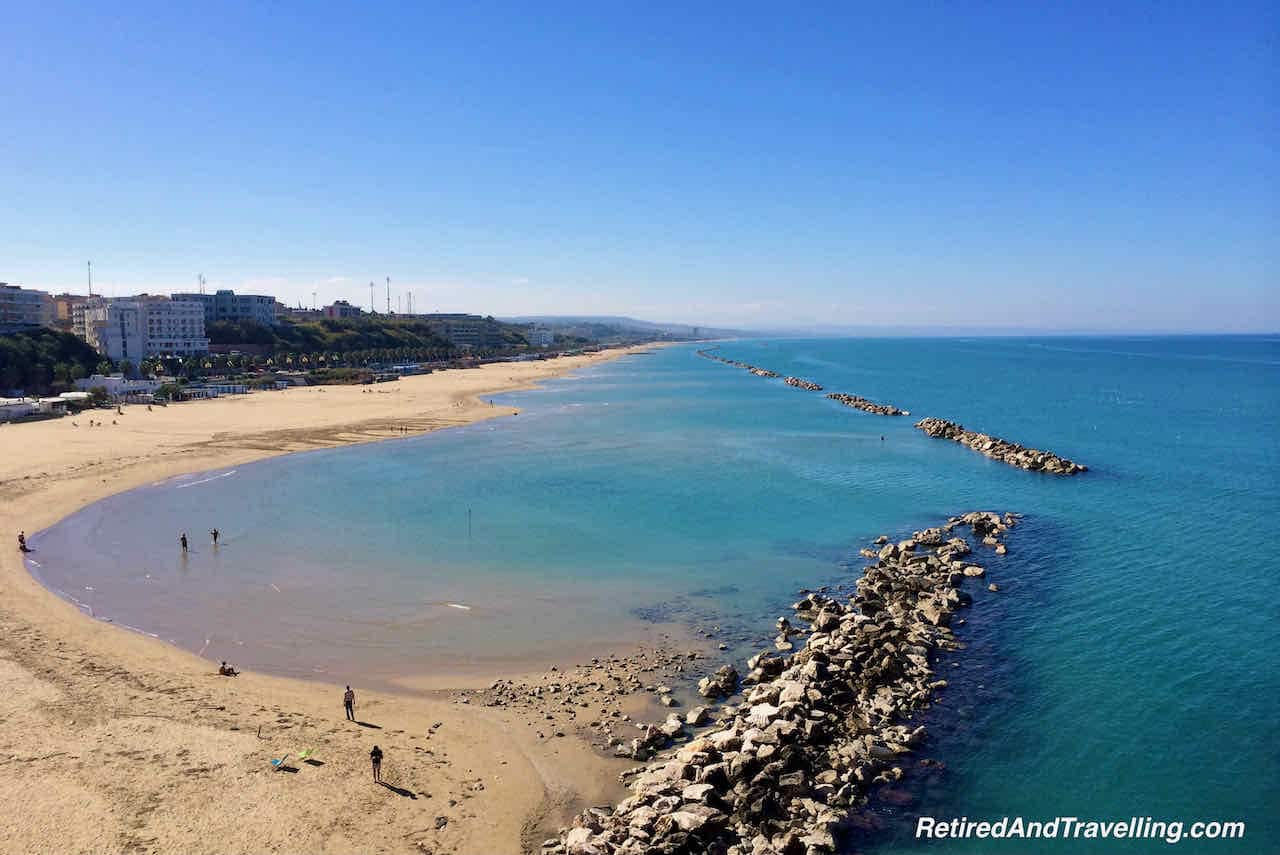 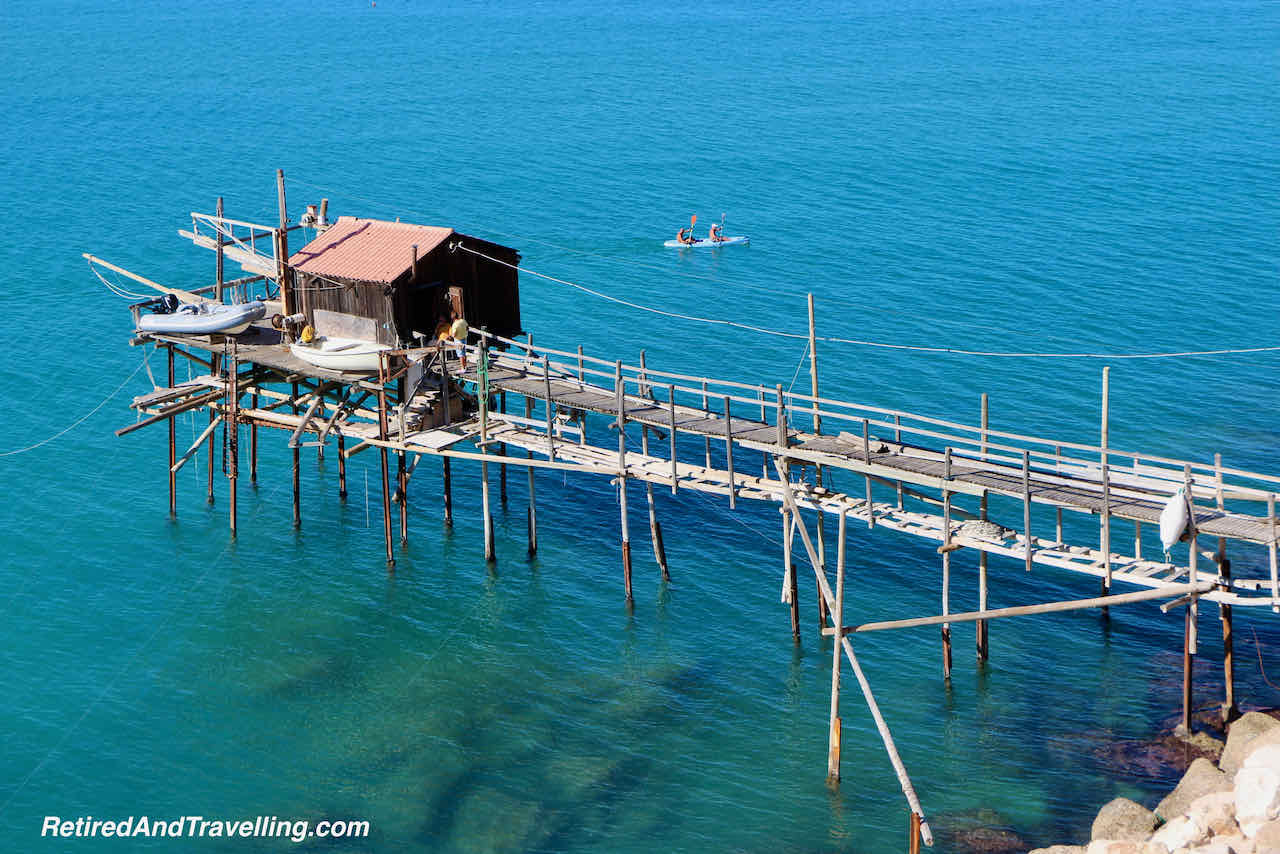 Along this road we came across the most unusual sight. We were a bit confused when we saw the first young girl sitting on the side of the road in one of the pullout areas. As we continued we passed single and small groups of girls.  Some wore small tops and just their panties.  Then the light went on. These girls sold themselves to the truckers and farm workers that came along the road. This went on for miles and miles.

As we drove along we saw quite widespread use of windmills on the hills and valleys.  But we were surprised with the little visible use of solar power.

The fields in the plains of the two lakes (Lesina and Varano) looked rich and red. But as we continued south and started to climb, the climate appeared more and more desert-like.  Giant cactus plants bore bright red fruit stood at the side of the road. We also started to see white towns built on the sides of the hills.

We originally optimistically planned to visit Vieste on the peninsula before we headed back towards Foggia and the interstate.  But when we hit the signs for Rodi Garganico we knew we would take a quick stop and then retrace our steps before darkness descended.

As we approached Rodi we saw a town high on a hill and on a whim I suggested we turn in that direction. David did not believe the road would go all the way to the top.  But we soon discovered the switchbacks in the trees indeed got us to the top and Ischitella. 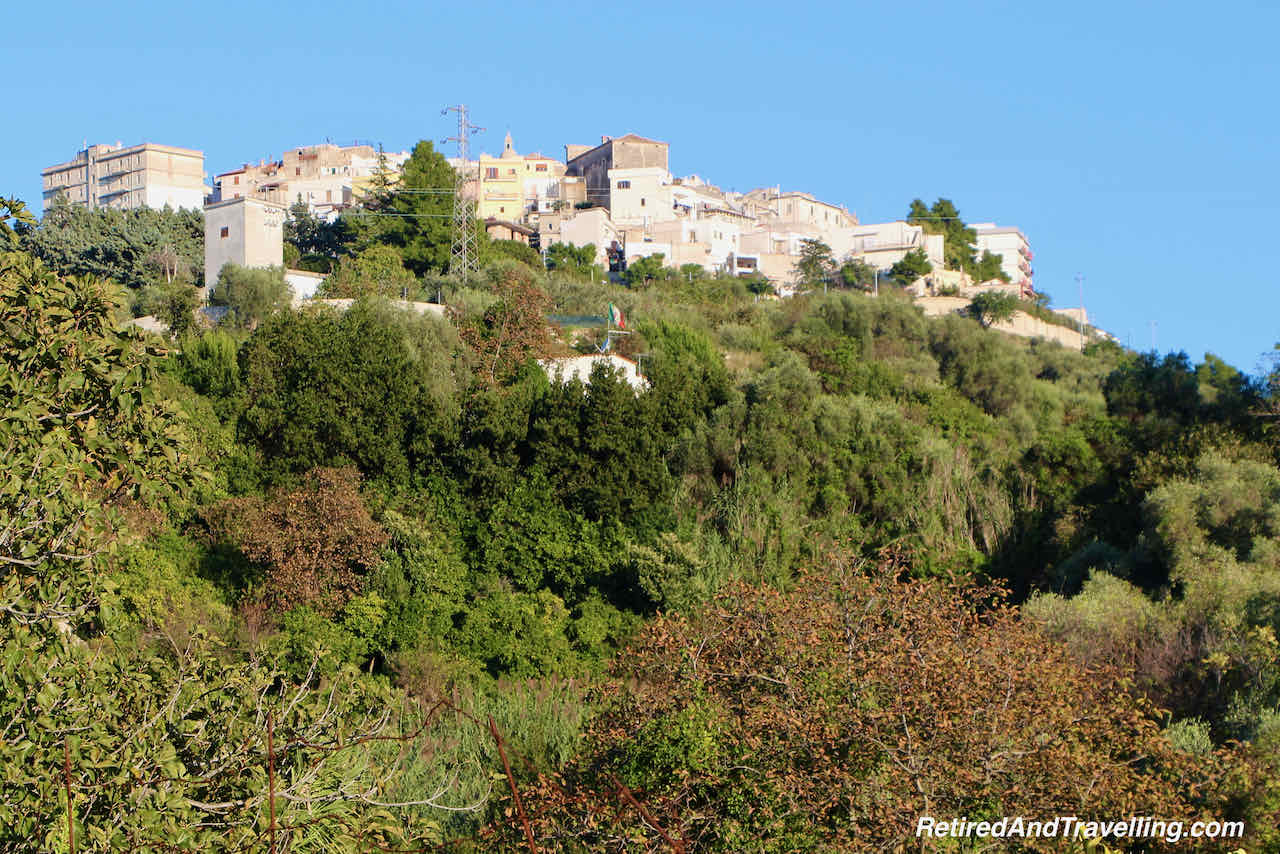 We found the town of Ischitella virtually untouched by tourism. As we went through the switchback road in the town, the locals looked out at us with curiosity. Parked, we wandered through groups of mostly men huddled in small groups. The few older buildings we saw had no signs of restoration and we found no typical town map that pointed out key sights. This was probably a good thing as we were kinda overwhelmed with all that we already was that day. We took our panoramic pictures of the countryside and had a quick stop in the local bakery.  Then we were on our way back down the switchbacks before we lost all light. 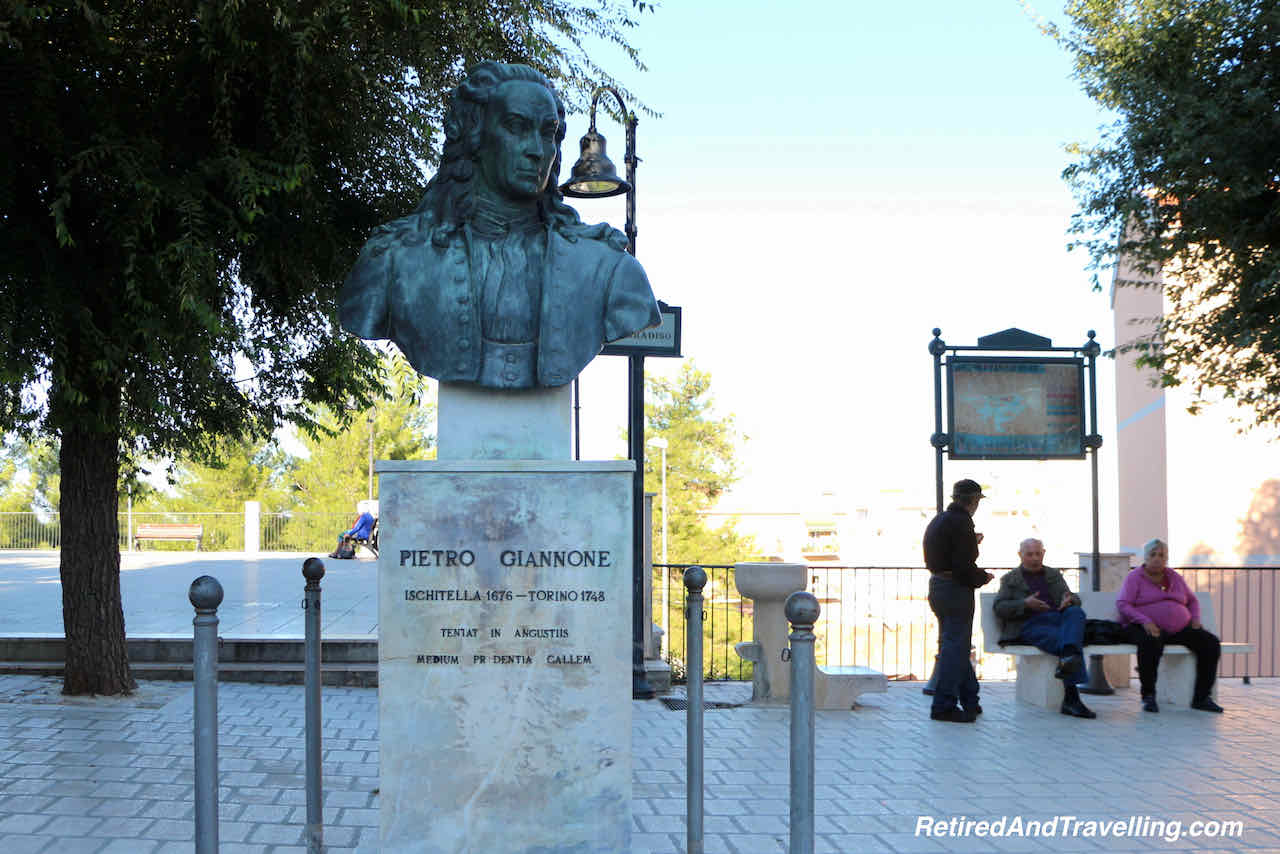 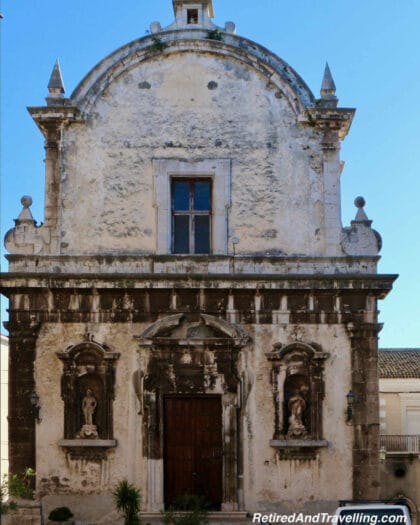 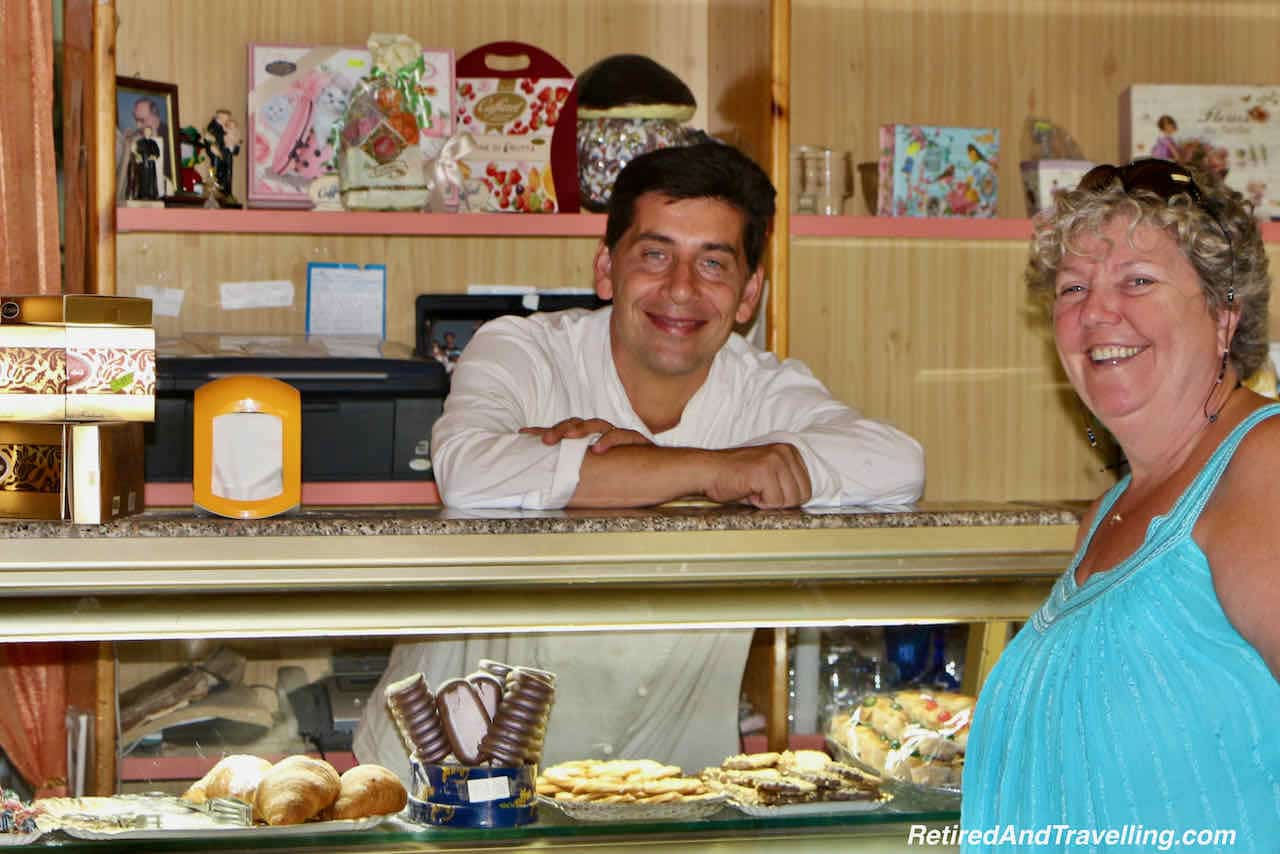 It was a lovely drive back through Puglia as the sun set and reflected off the ocean. The trip back along the interstate was still a couple of hours.  It was mostly uneventful after we got gas with the car almost on fumes.

We stumbled with numb butts back to the hotel in Pescara and scrounged our picnic supplies for food. We went nowhere else that night.

Where did you go when you explored the Adriatic coast of Italy?  Did you see the coastal forts protect the Adriatic Coast? 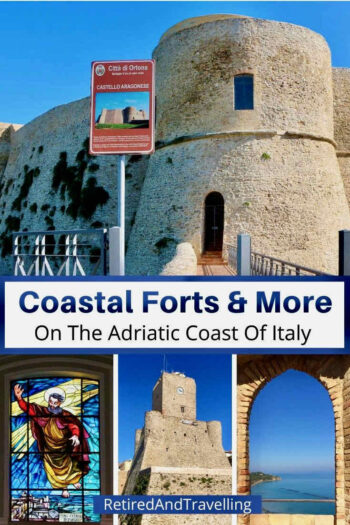 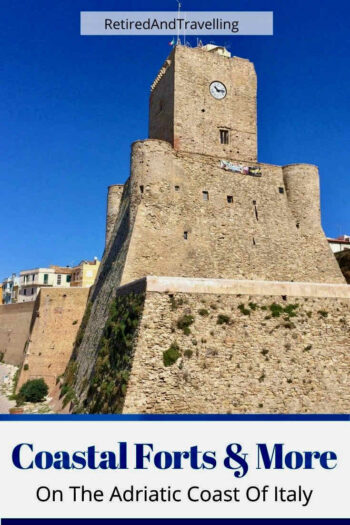 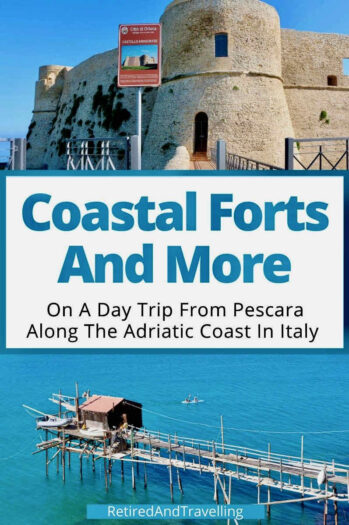