Visiting The Abruzzo Hill Towns Of Sulmona and Scanno

To tour around the Abruzzo region in Italy, we rented a car to visit the hill towns of Abruzzo – Sulmona and Scanno.  Every stop we made on our visit to Italy, we planned to get a car.  But have been lulled into the ease of train and bus travel. While that got us almost everywhere, we knew we were missing poking our heads into places as we wandered off the main routes.

David pre-booked our Europcar and found almost no premium for dropping off at another town.  So we booked the car for 2 weeks with pickup in Pescara and a drop off in Sorrento. We did not have to haul bags between the next 3 stops. Picking up the car was a breeze. We got no pushback when we declined the long page of extra insurance offered in Italy.  We used our home car insurance with extra credit card coverage instead.

Heading Into The Hills

Picking up our mid sized green Nissan, we were a little disappointed that we didn’t get a bright orange Panda.  We navigated successfully out of the train station and were on our way. I anticipated a few fights about navigation.  But figured we would live through it. David’s weird loss of his navigation sense since landing in Europe continued to plague us.

We decided to head into the mountains on the smaller local SS5 road.  But after two consecutive missed turns sent us in a circle and back to the A25 autoroute, we figured that maybe someone was telling us something. We stayed on the autoroute until we got away from the coast a bit.
Exiting the autoroute around Popoli, we reconnected with the local SS5 route again.  The signs clearly now pointed to Sulmona and Scanno. We debated stopping in Popoli.  But now being about 90 minutes behind where we planned to be, we continued on.
Everywhere we looked we saw the tall mountains around us.  Large barren rocks jutted up and mountain tops were hidden in clouds. We were in the land of hill towns.  Small hamlets were tucked up on the hills or built right into the hill.  We saw these hill towns again when we visited Ostuni in the Puglia region. 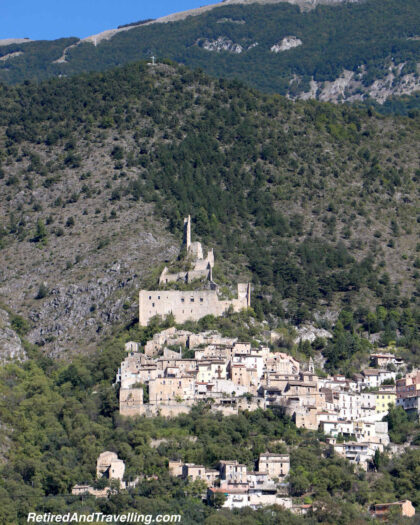 We followed the GPS into the heart of Sulmona and headed for the IAT tourist information spot. We found the IAT marker for the tourist information only as we headed back to the car after our visit of the town. Virtually all towns we visited in Italy had tourist offices.  But it was almost always hard to actually figure out which building they were housed in.

It was a quiet town for the few hours we wandered.  We were sure this was evidence of the real slowdown that happened during siesta time. Picking a scenic spot across from a church, we watched the little traffic that strolled past. 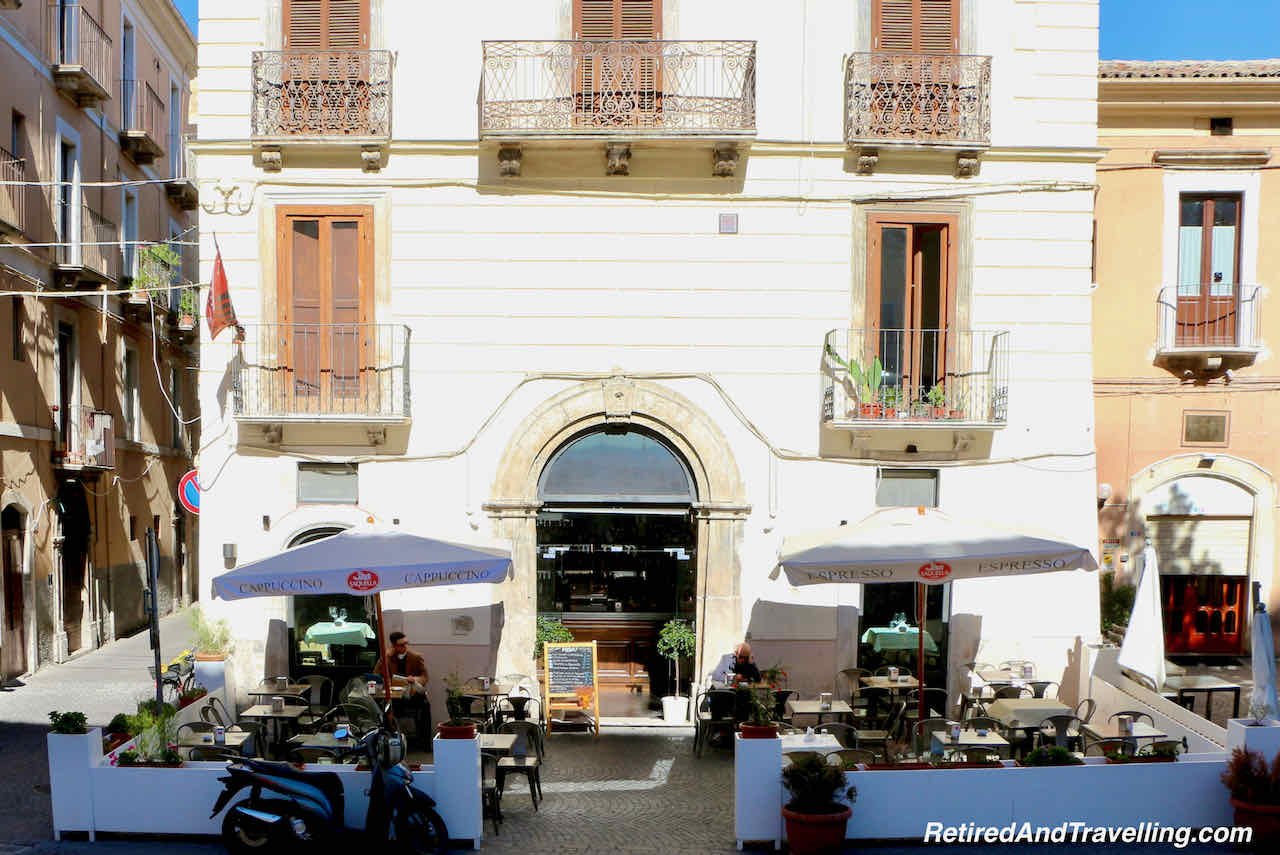 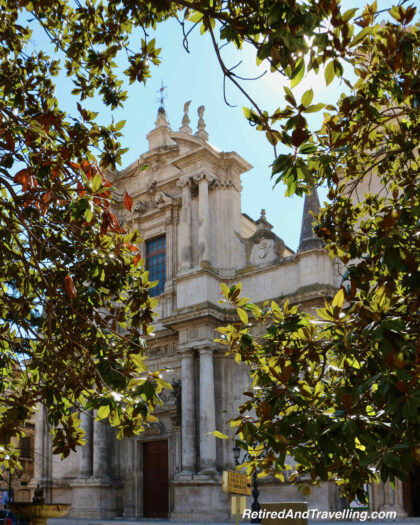 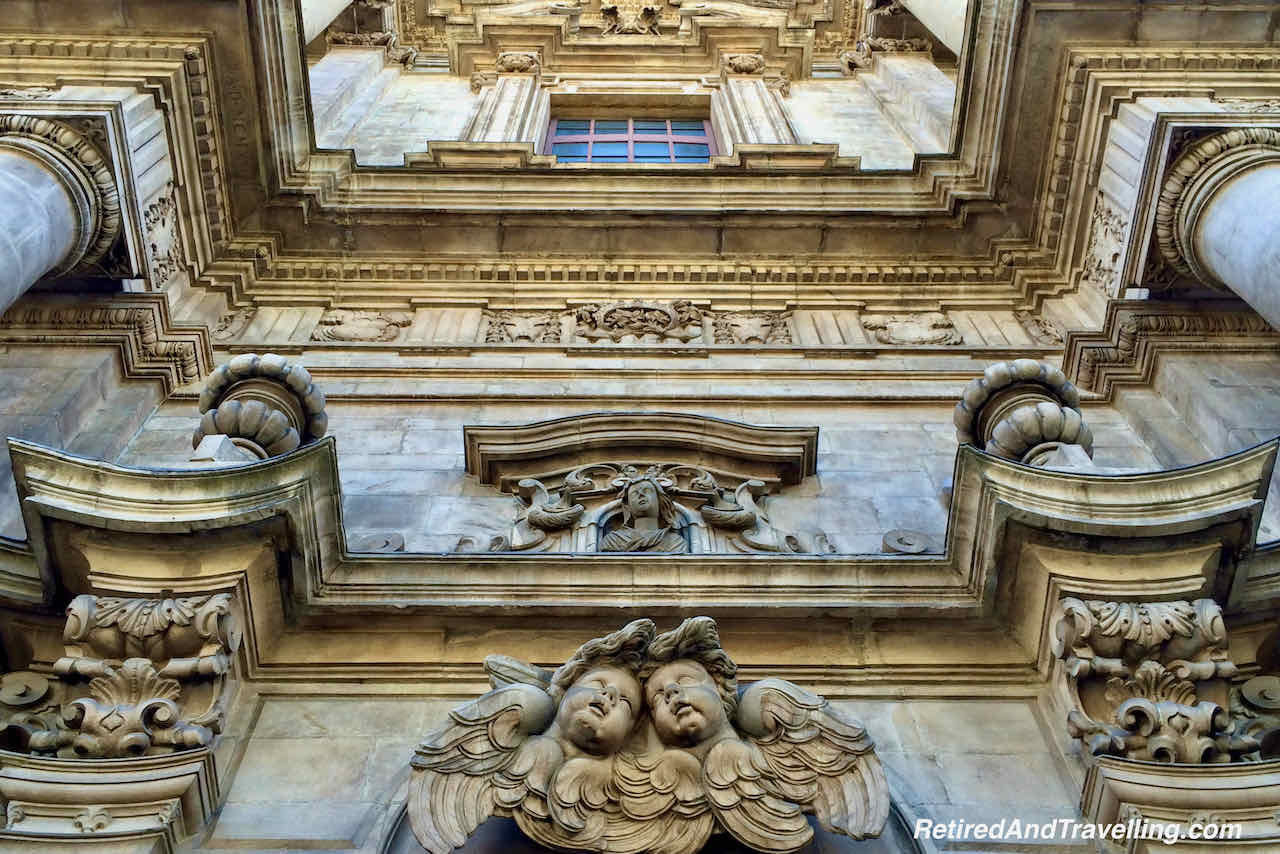 After a good lunch we strolled around and looked at the town sites.  They were picturesque against the backdrop of the mountains in the distance. 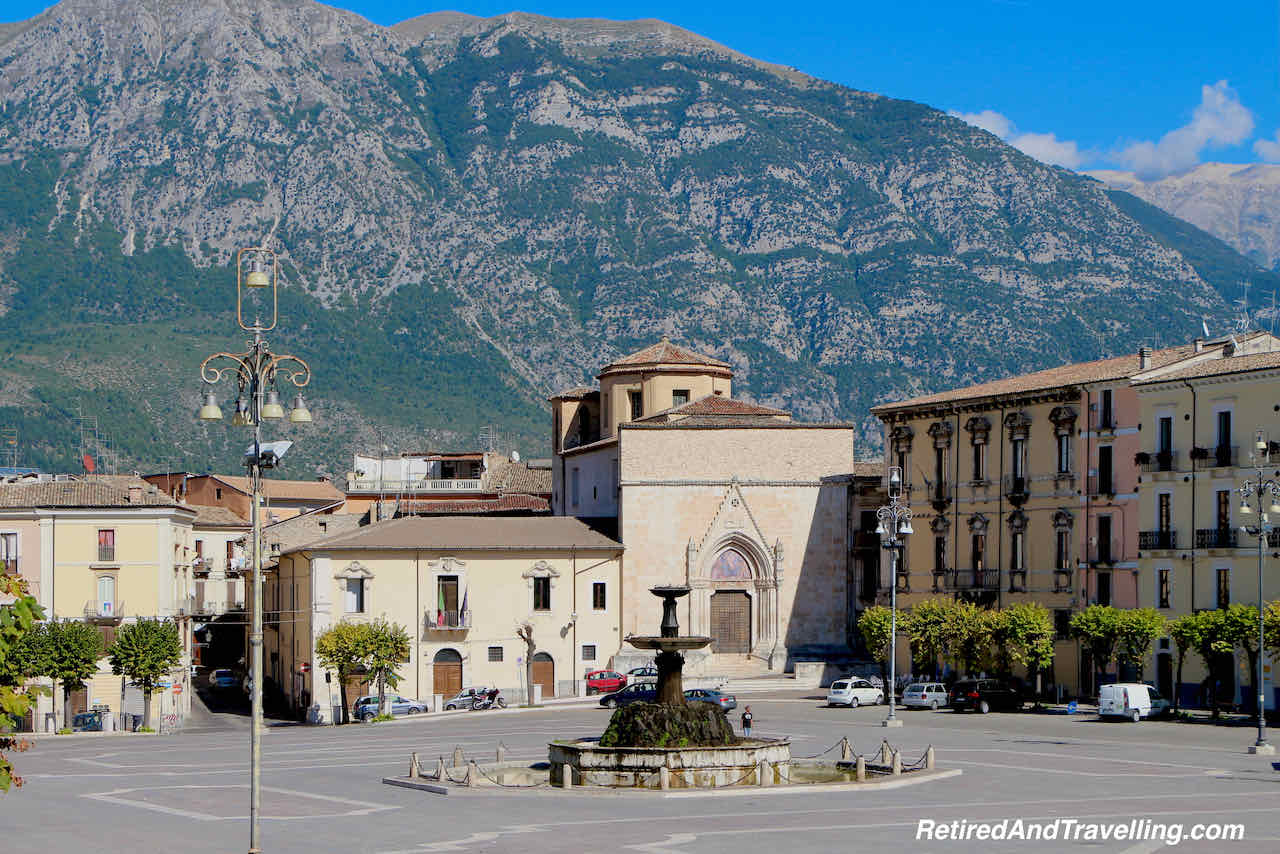 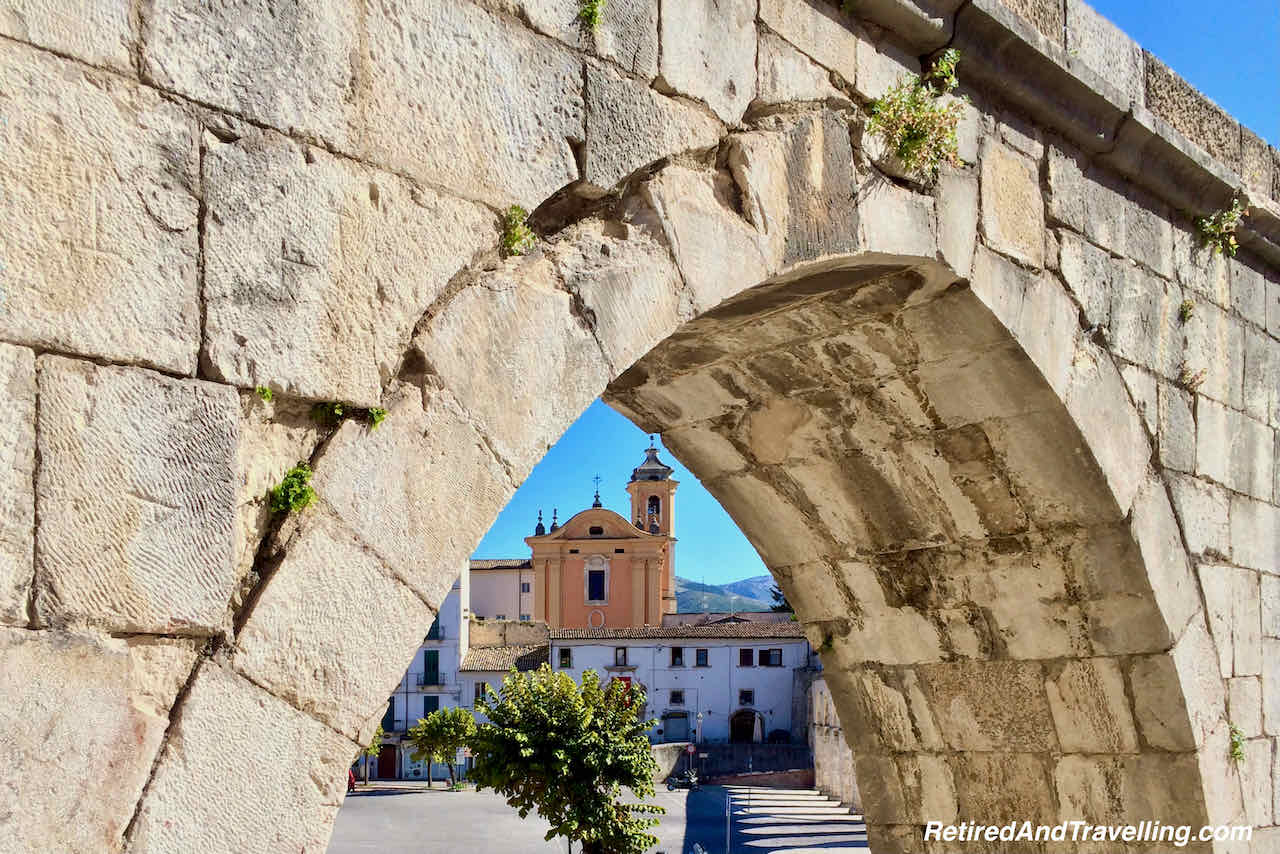 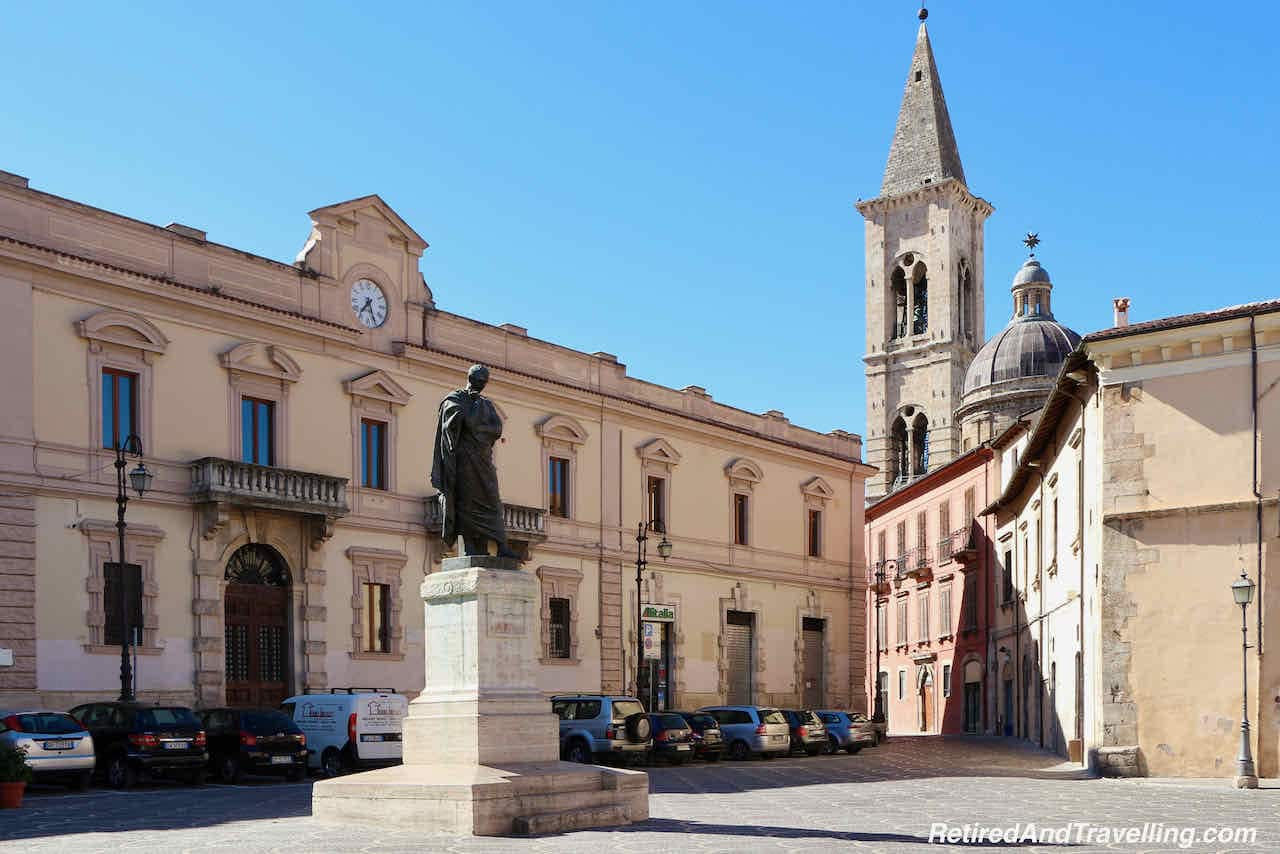 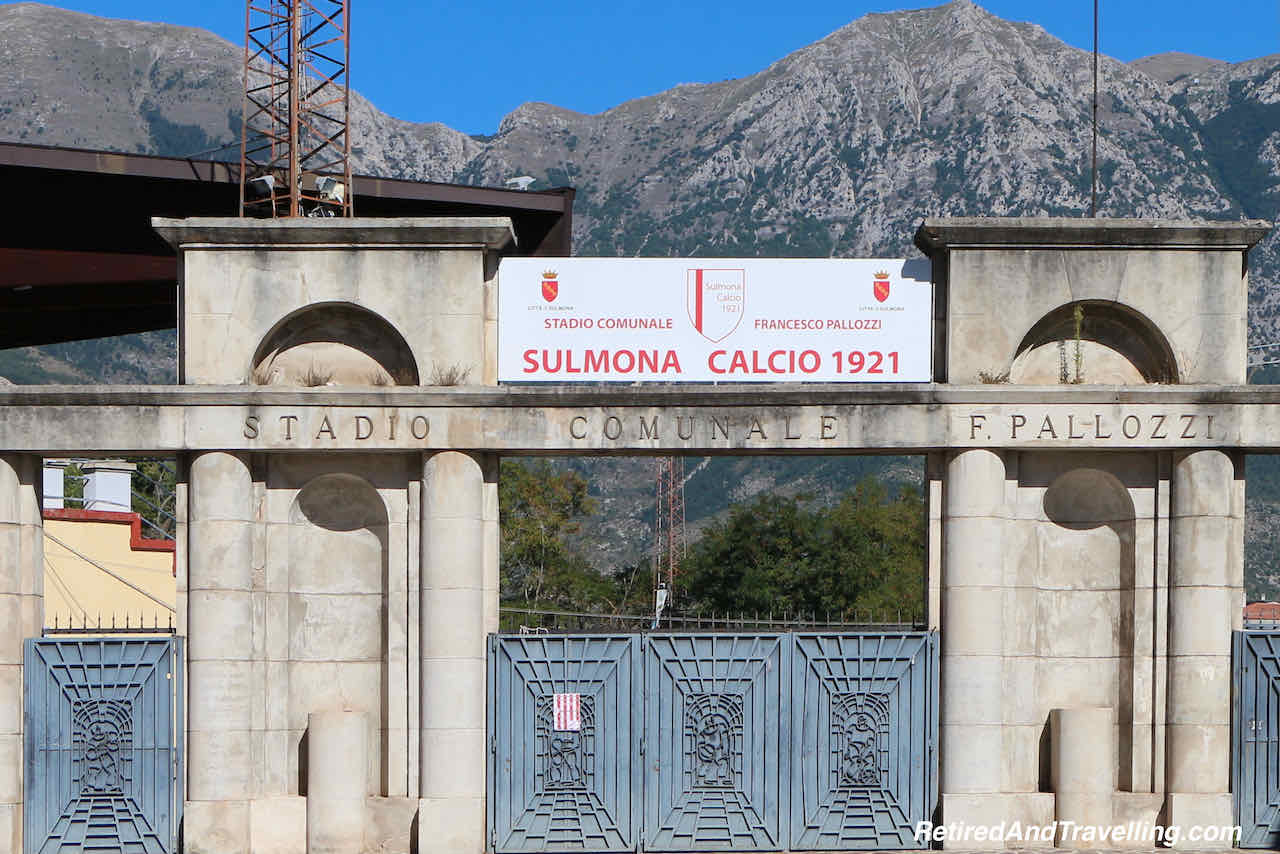 We had been told to be sure to get some “confetti“, local candy covered almonds. Little did we know that this would be such an art form.  We even found confetti displayed as brightly coloured flowers. We made sure to buy our bag of samples! 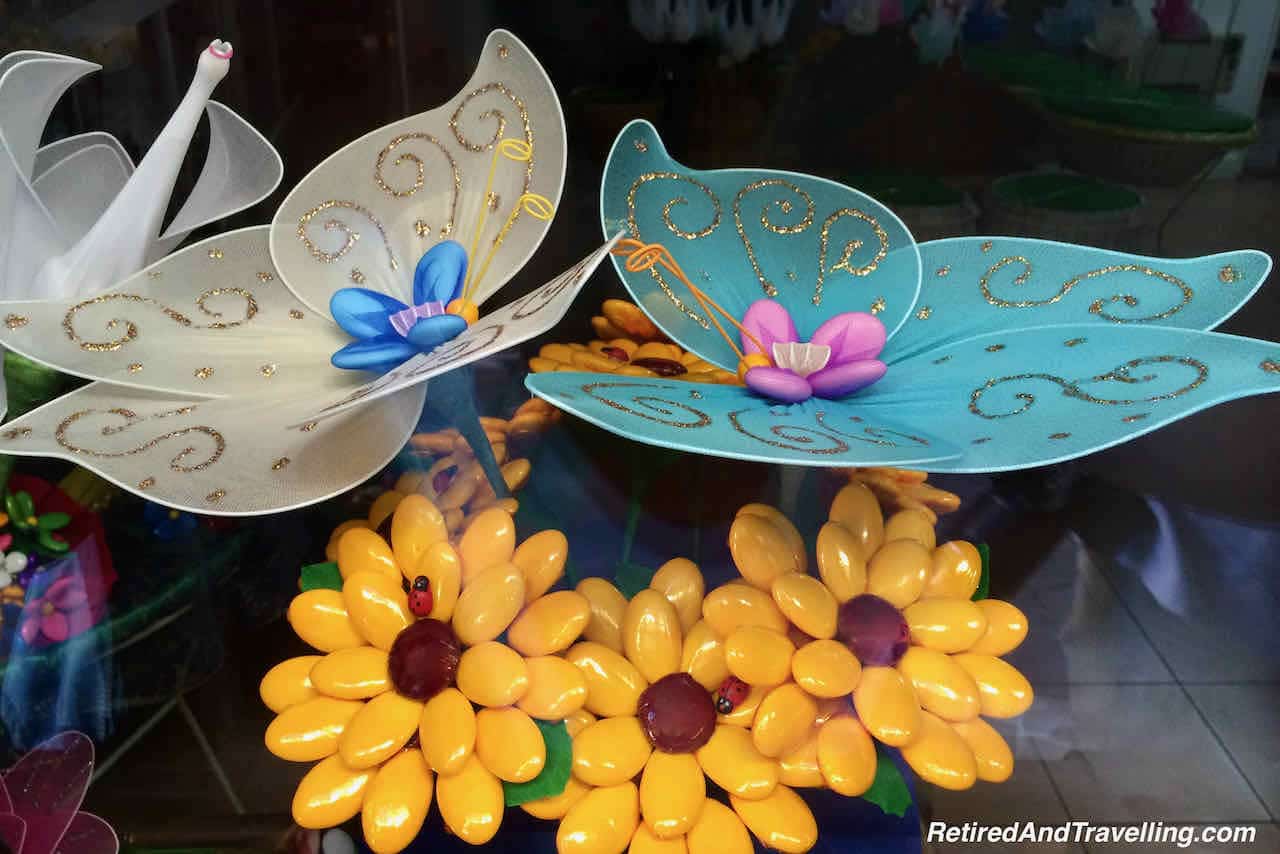 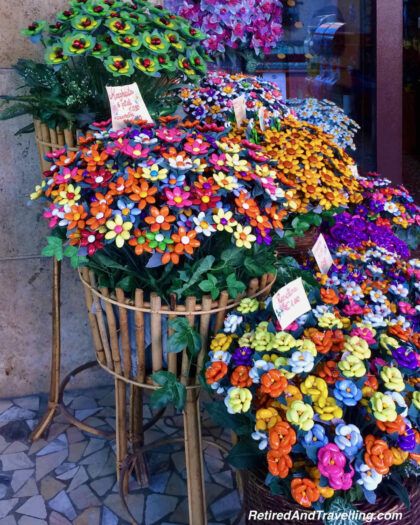 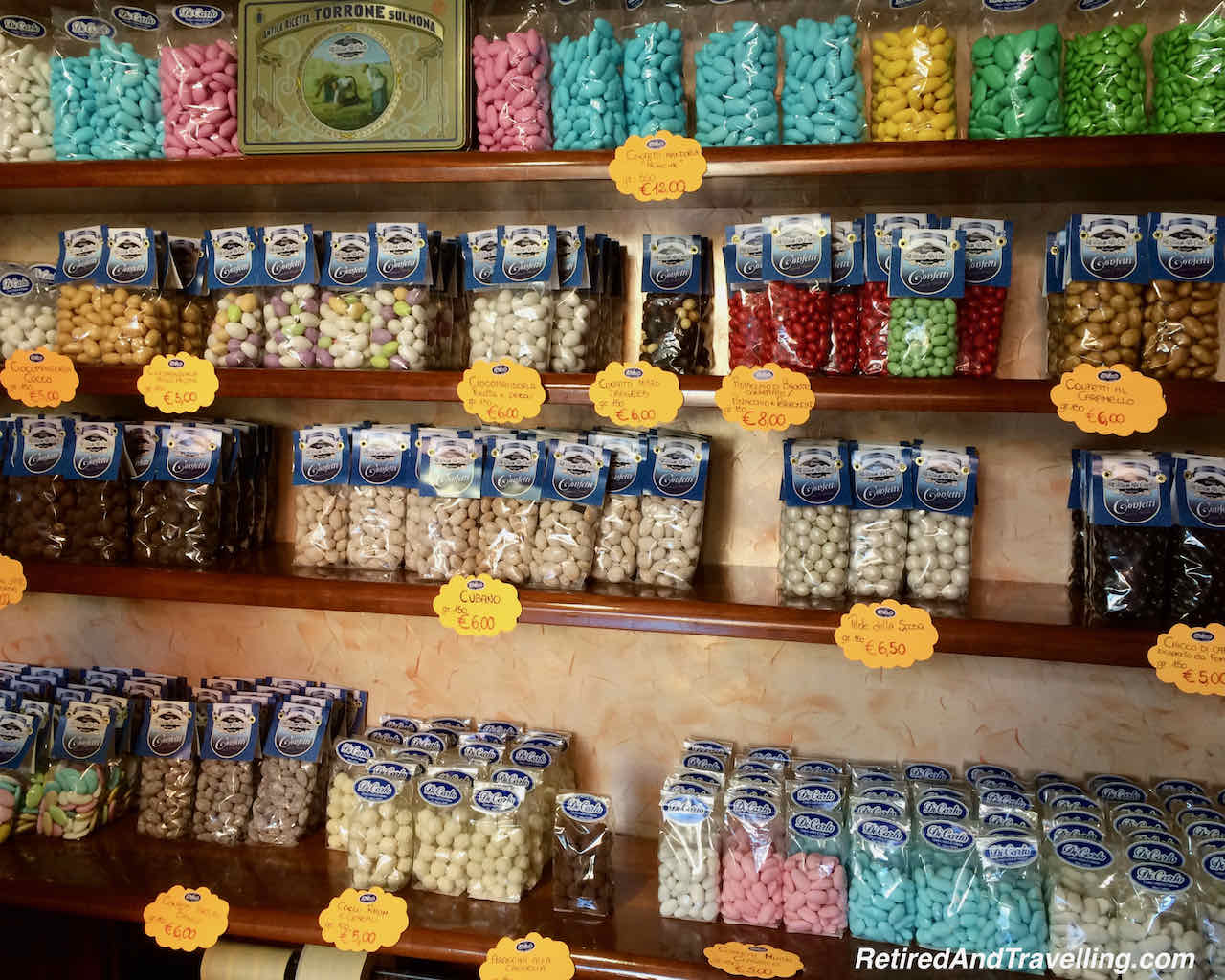 On To Scanno In The Abruzzo Hills

Leaving Sulmona, we continued to meander the hills along the narrow twisty roads. Having experienced the roads along the Amalfi Coast and our recent 4 weeks along USA’s West Coast PCH, we took the curves with barely a second thought. A few spots were single lane, including through one small tunnel.  But we remained undaunted. The only thing that had us wondering was the sign that warned of flooding.  It was apparently for release of flood dams? We were not sure what warning we might get if they decided it was time to open a sluice gate somewhere. 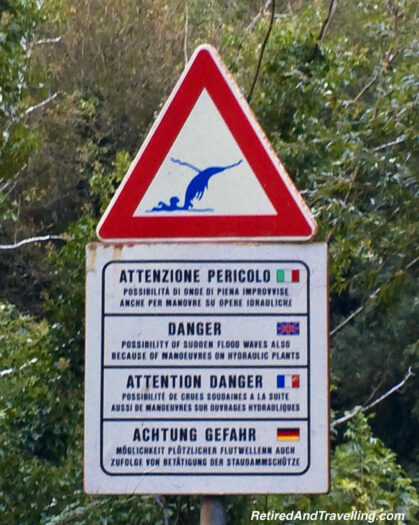 We stopped at two lakes (Lago di San Domenico and then finally at Lago di Scanno) and enjoyed the look of the emerald water.  But we were not tempted to put our toes in the mountain lakes. 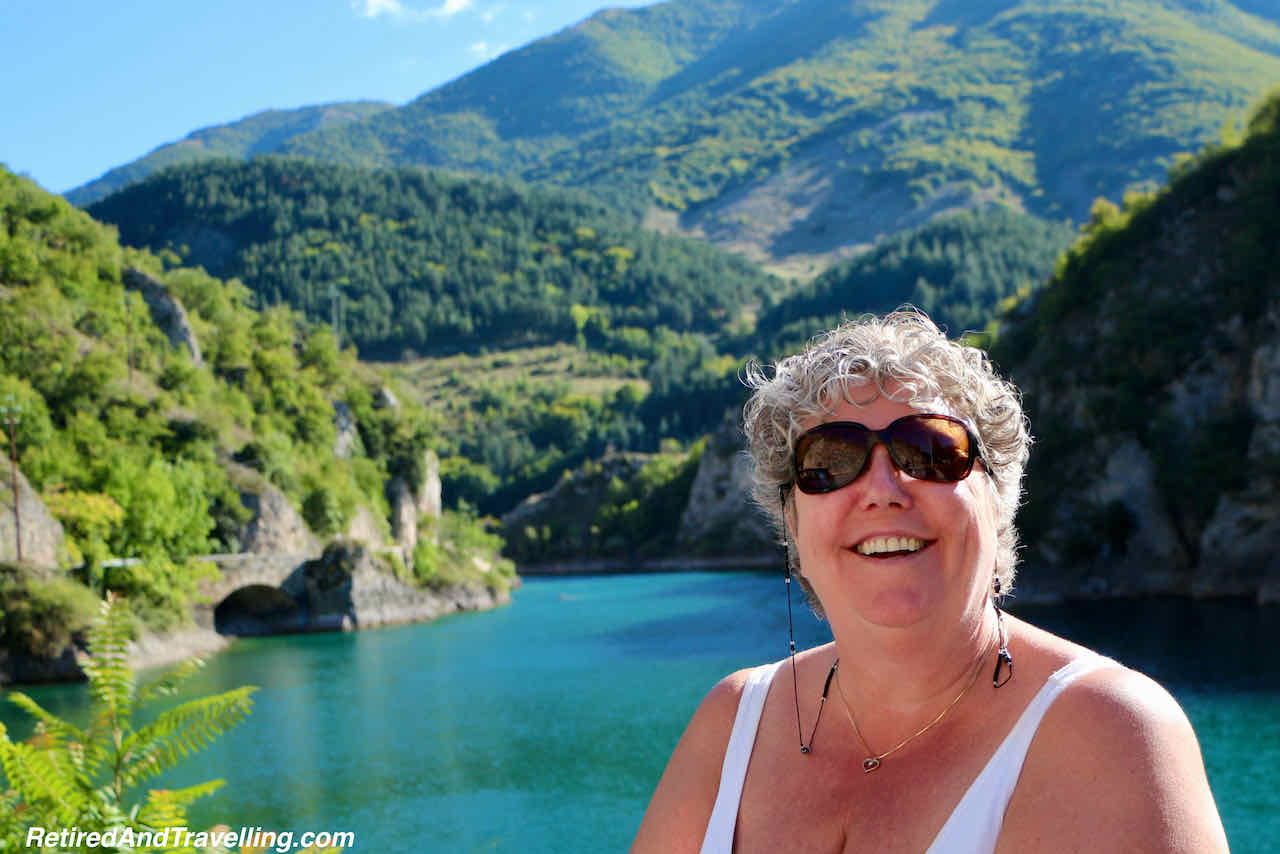 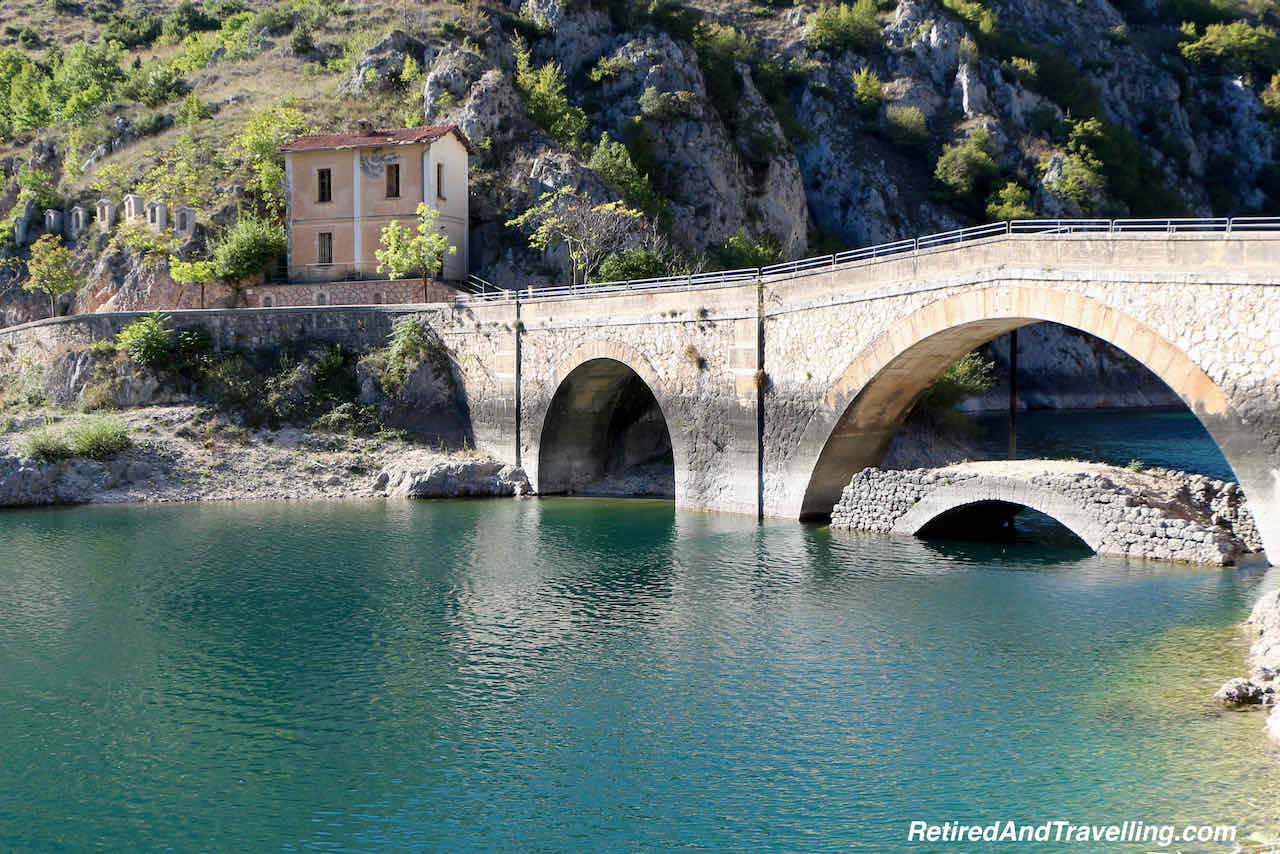 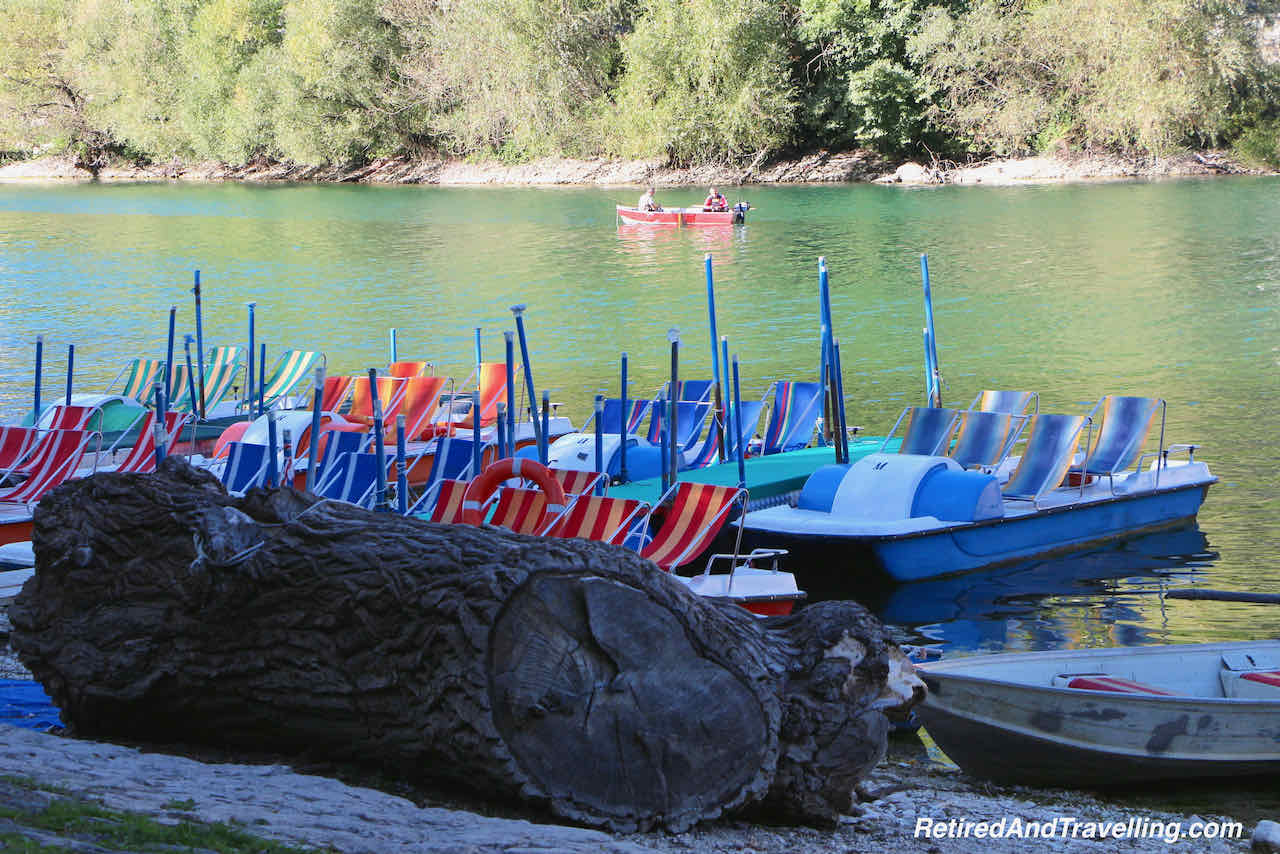 Arriving in our final target destination of Scanno, we parked and wandered around the little town.  We went up and down the hilly streets. It was a quaint little town that sported the Italian colours in banners around the town. The locals looked at us everywhere we went. Perhaps it was less of a tourist stop or maybe they were used to tour groups. 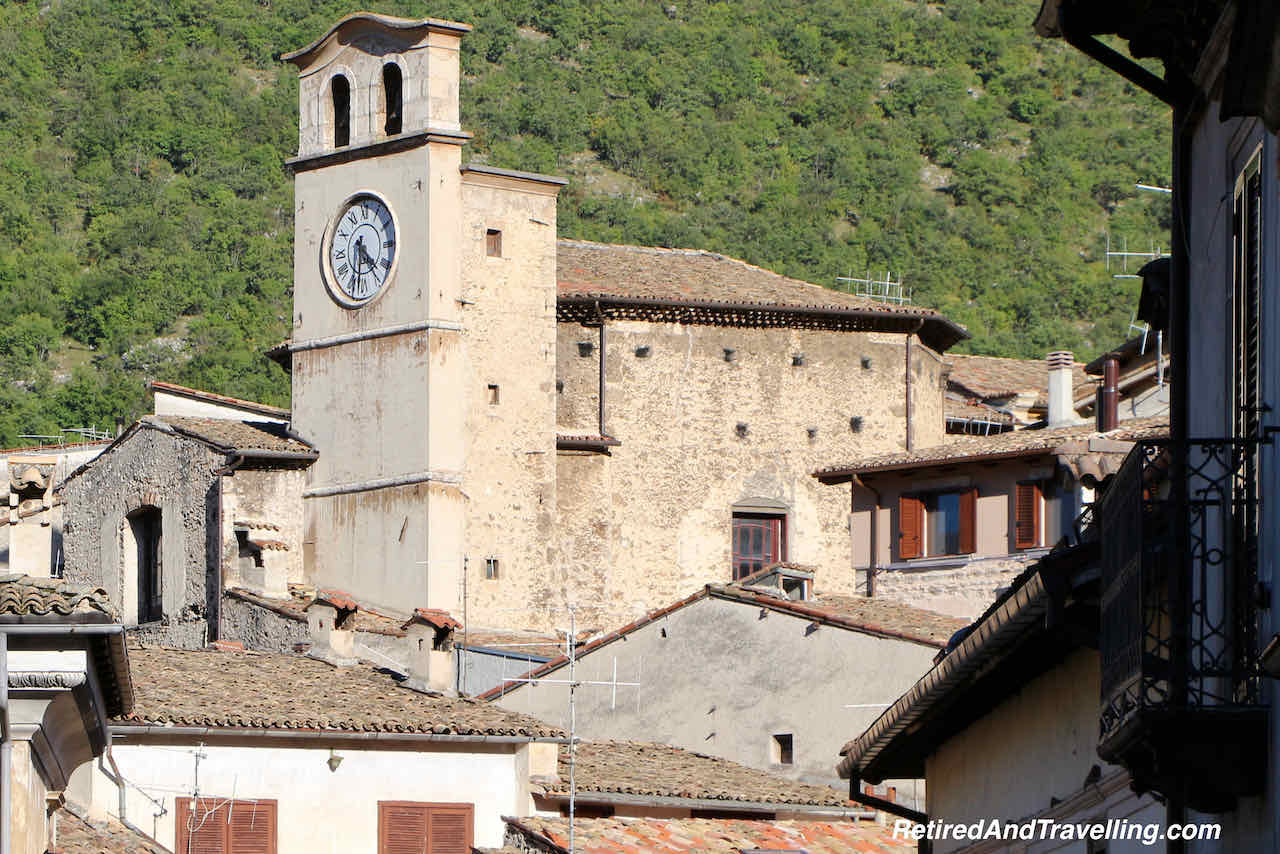 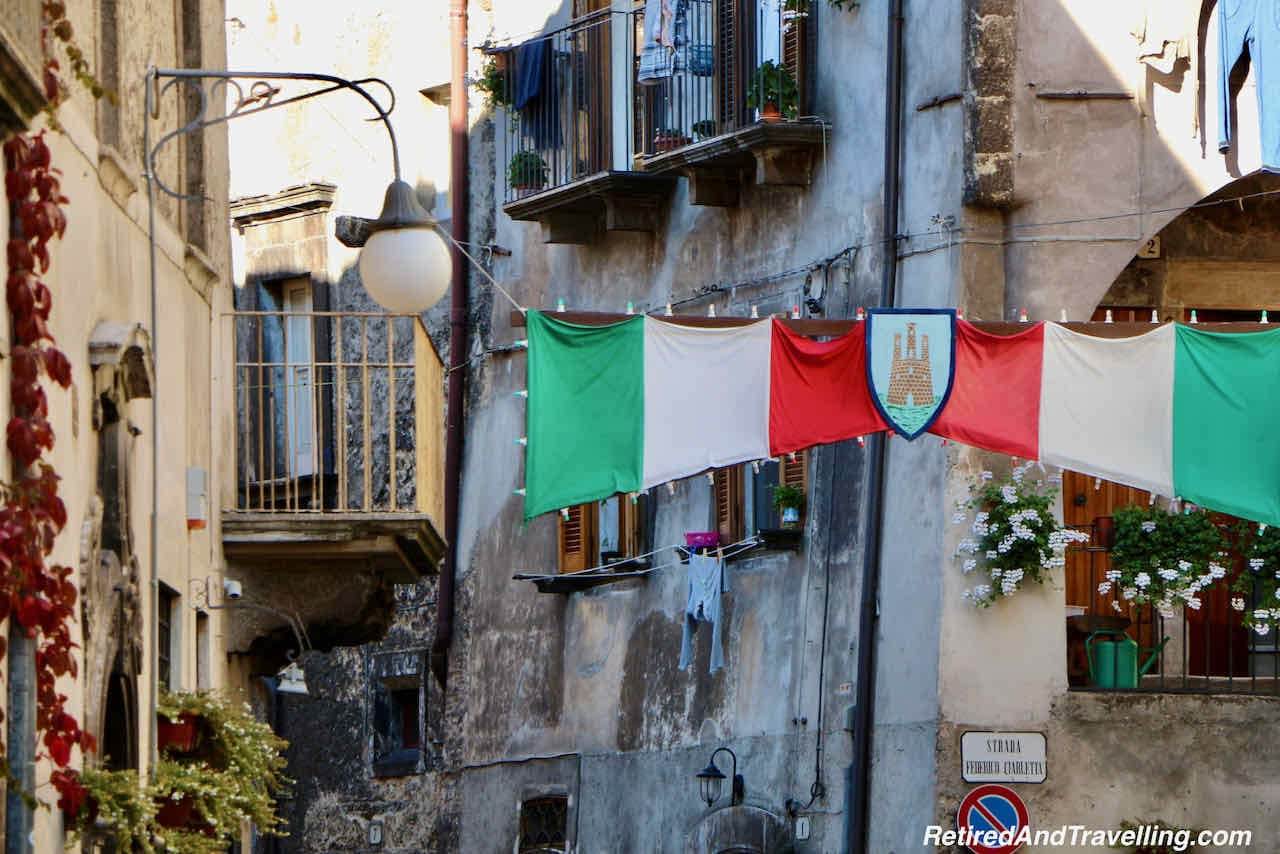 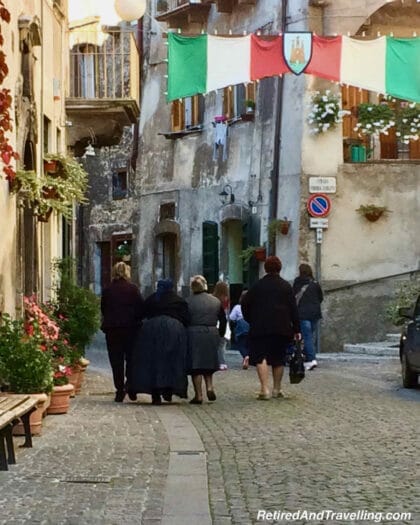 This did not deter us as we poked around finding a store that specialized in liquorice.  This was David’s new addiction. Taste testing a variety, David finally left with a bottle of local Liquirizia (a digestive served best ice cold). 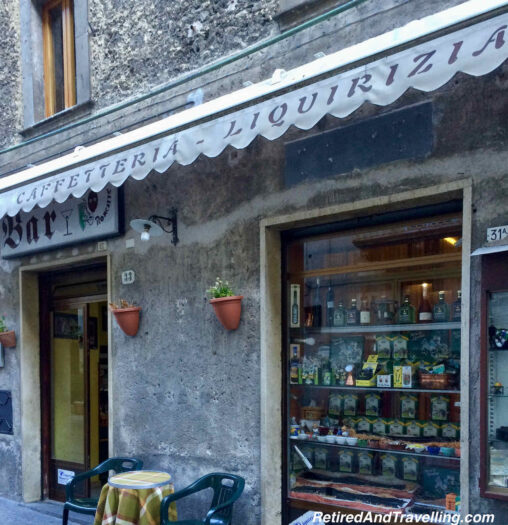 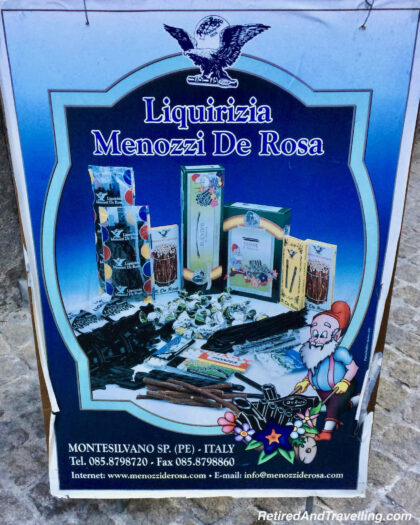 While many restaurants offered Lemoncello after dinner, David was always quick to ask if he could have Liquirizia instead. Locals were surprised by this request.  They said that “only Italians drink Liquirizia”. David proved them wrong over and over again!

Heading Back From Sulmona And Scanno To Pescara

By this time, much of the valleys were in shadow as the sun sunk. We passed a few hill and valley towns that I wanted to photograph when we were on the way in.  But passed them by.  And unfortunately they looked much less interesting when they were fully in the shadows. We stopped a few times for pics but they were much less interesting shots.  It was a good lesson to always take the pic when you see it! 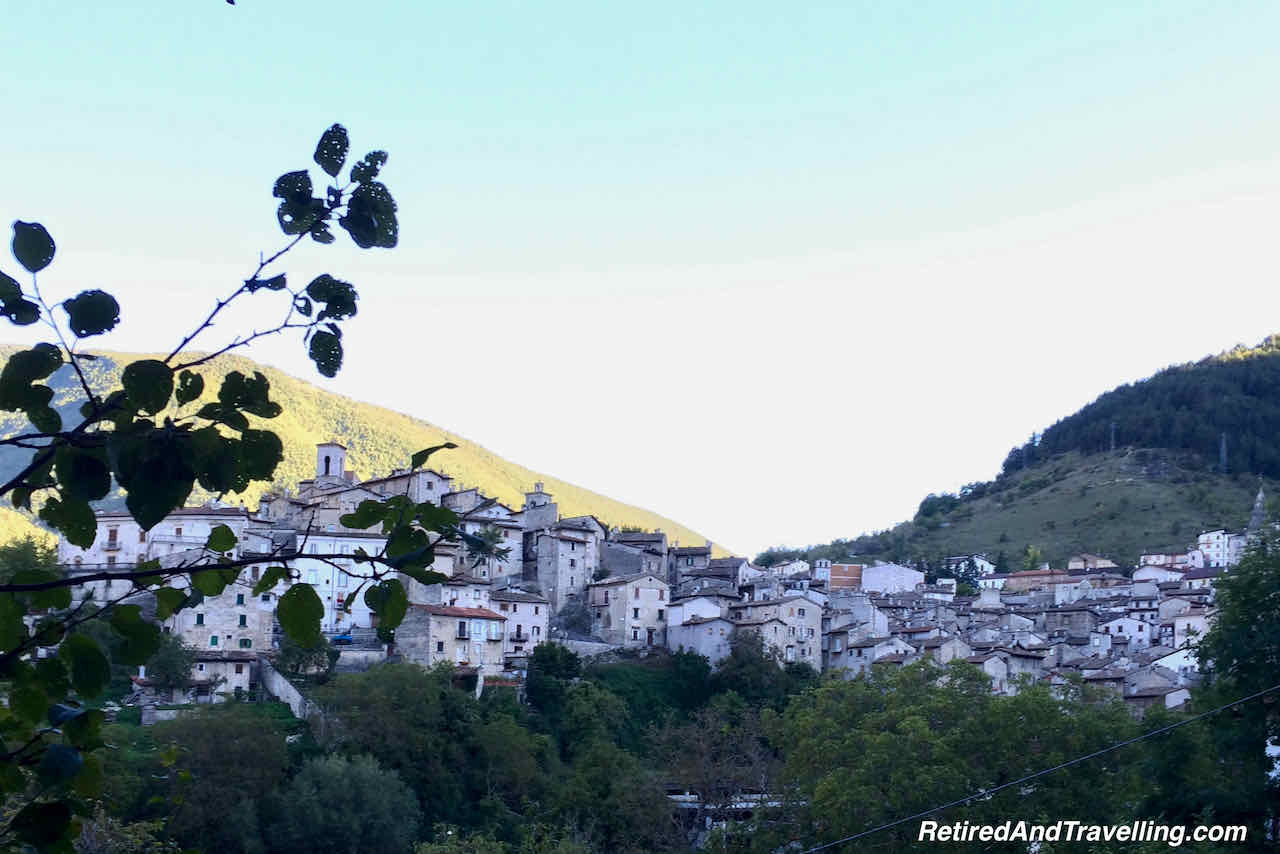 Hitting the first autoroute sign, we opted for the fast way home. It was time to head back to Pescara for the day.  It was a great day visiting the hill towns of Abruzzo – Sulmona and Scanno.

What was the first Abruzzo hill town you visited?  Did you visit Sulmona and Scanno in Abruzzo? Watch our blog to see all the rest we visited! 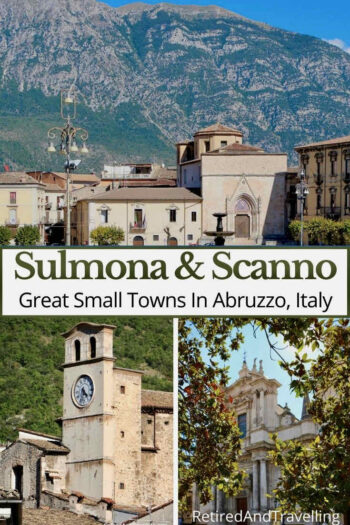 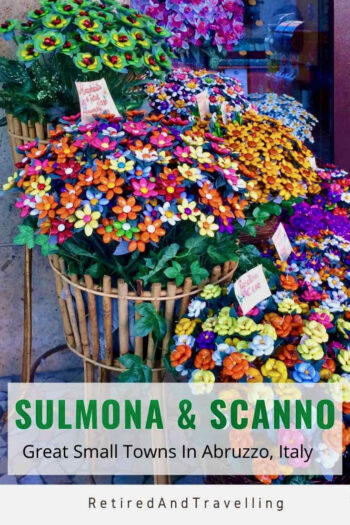 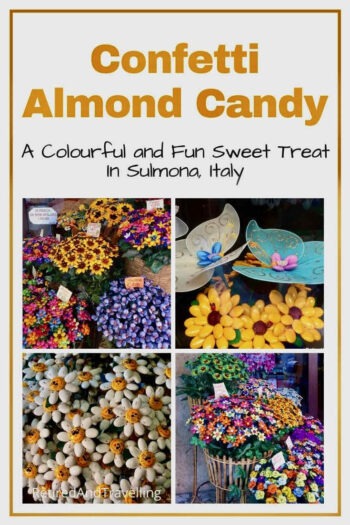