Our First Visit To St Kitts

The first port on our Windstar cruise to the Caribbean was St Kitts. This was a new port for us. When we looked at the excursions offered by the ship, we got excited at the prospect of doing a zipline ride in St Kitts.

The ship was anchored in the bay outside of Basseterre. We had a good view of the island as we came in. It was a classic volcanic island with the dormant volcano covered in clouds on one end. Black volcanic sand could be seen on the shore. As we got close, the typical colourful tropical houses were visible. 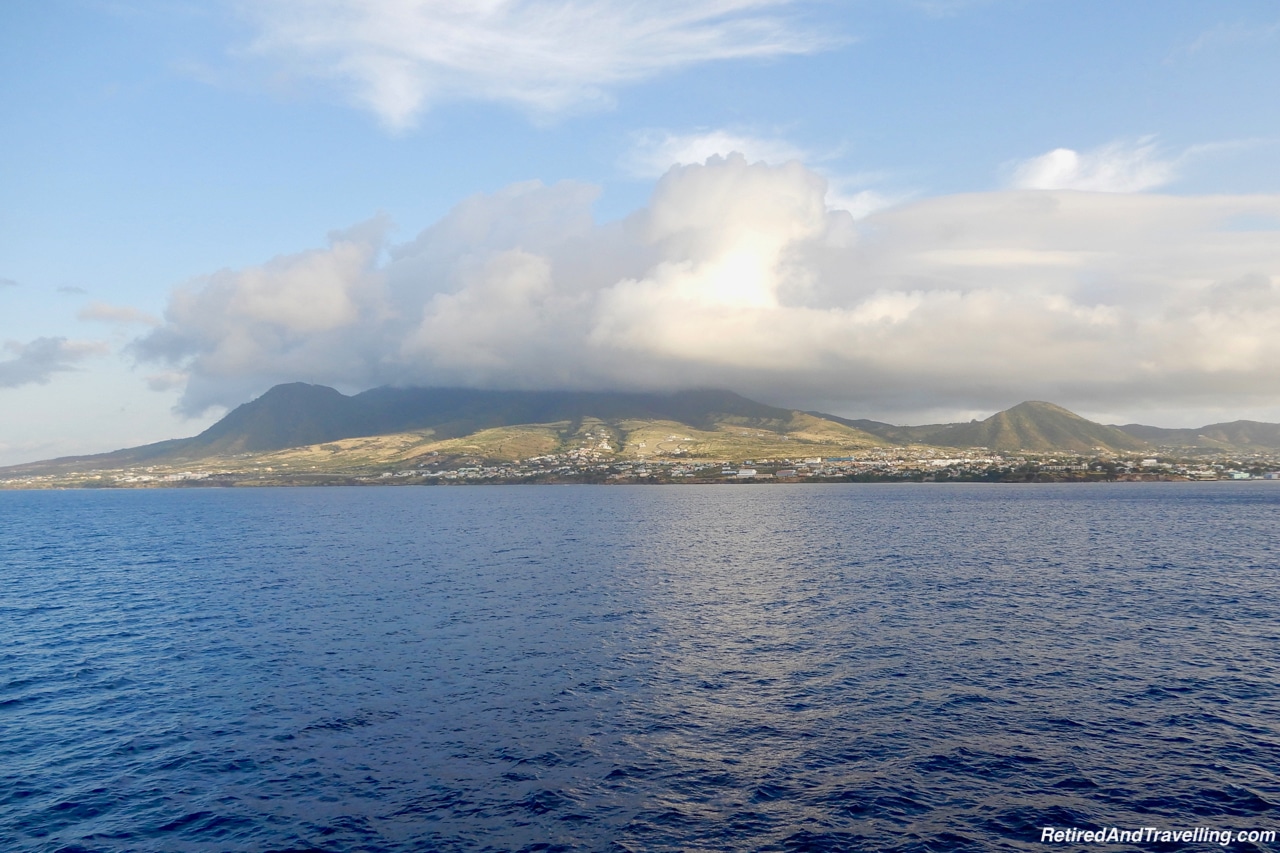 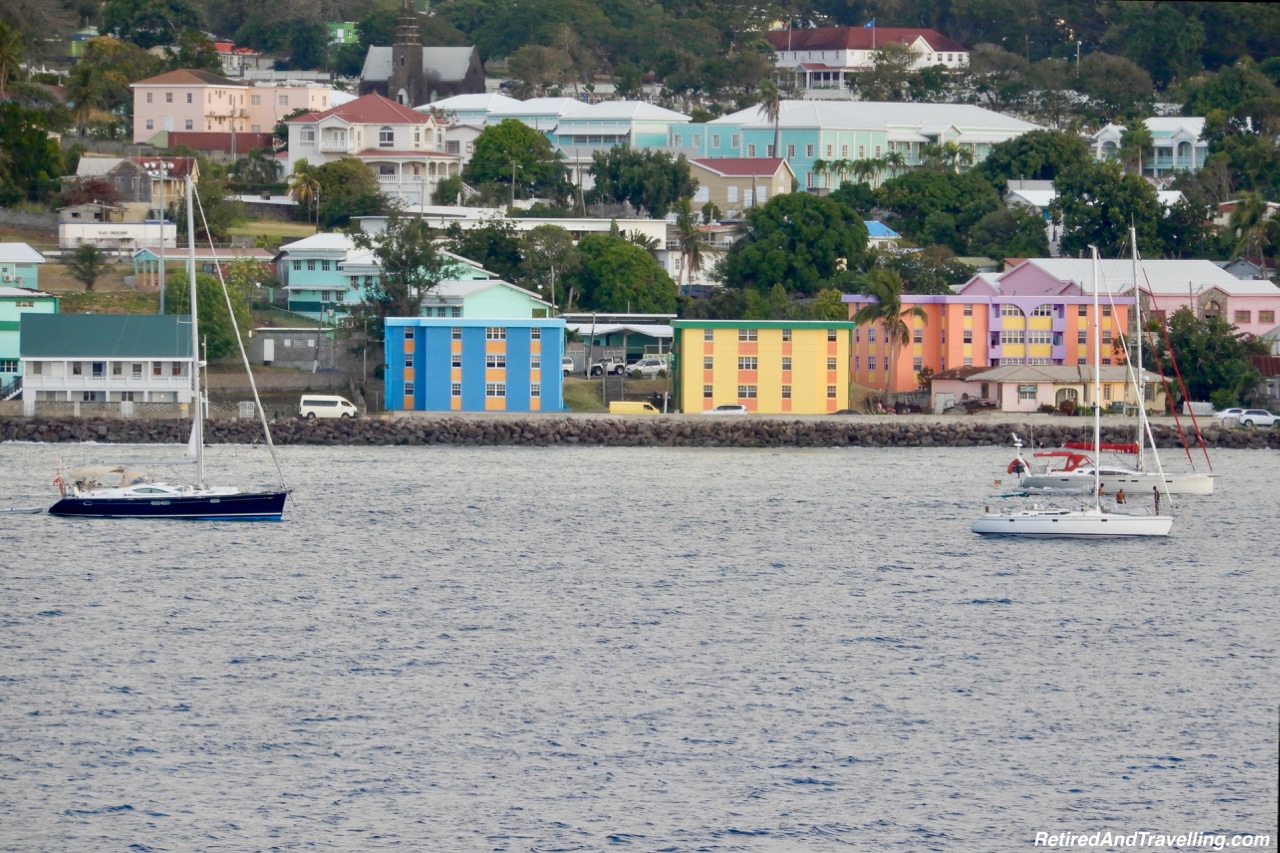 This was our first experience with tendering on the Windstar cruise. Even though the tender boat took only a maximum of 25 people at a time, we were the 3rd boat out and it was a short 10 minutes to the dock. Our driver picked up the 7 of us that were doing a zipline in St Kitts. 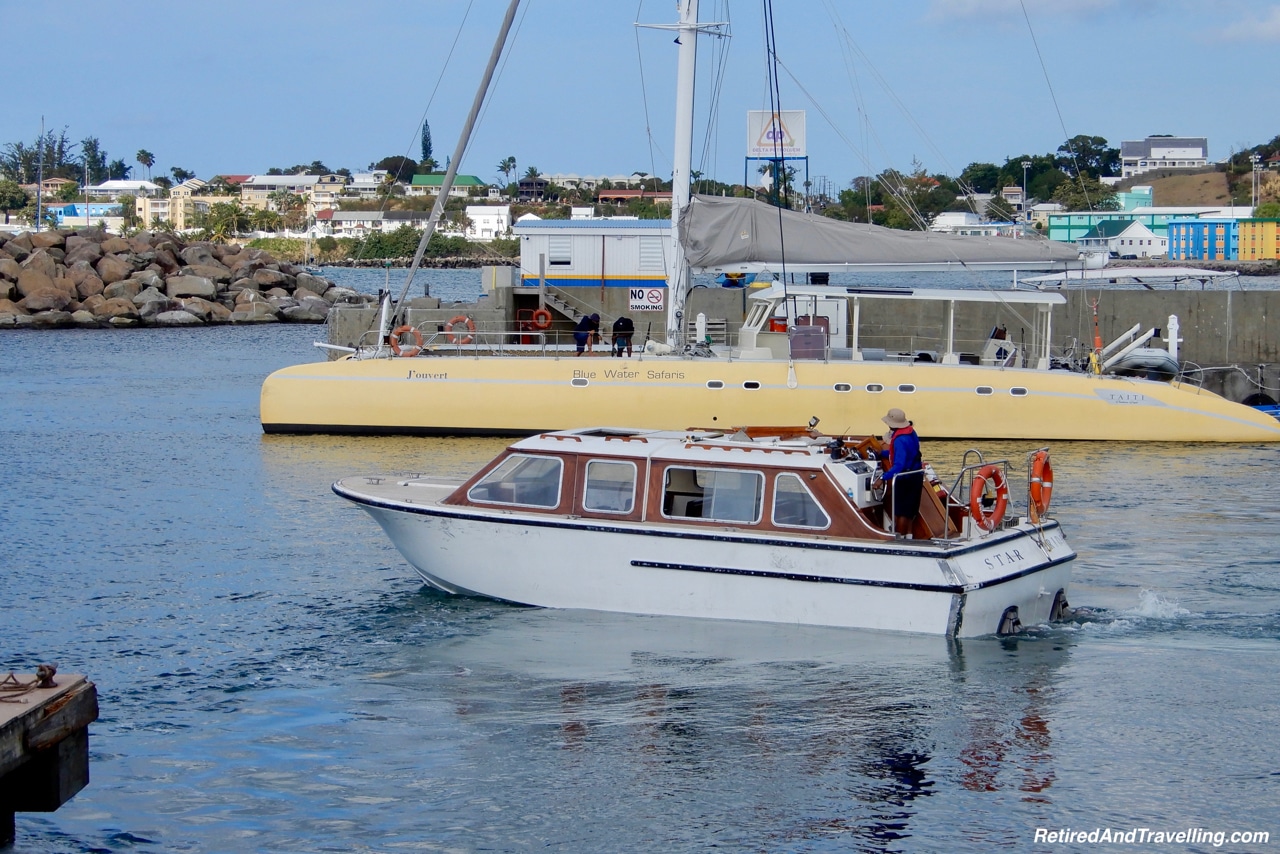 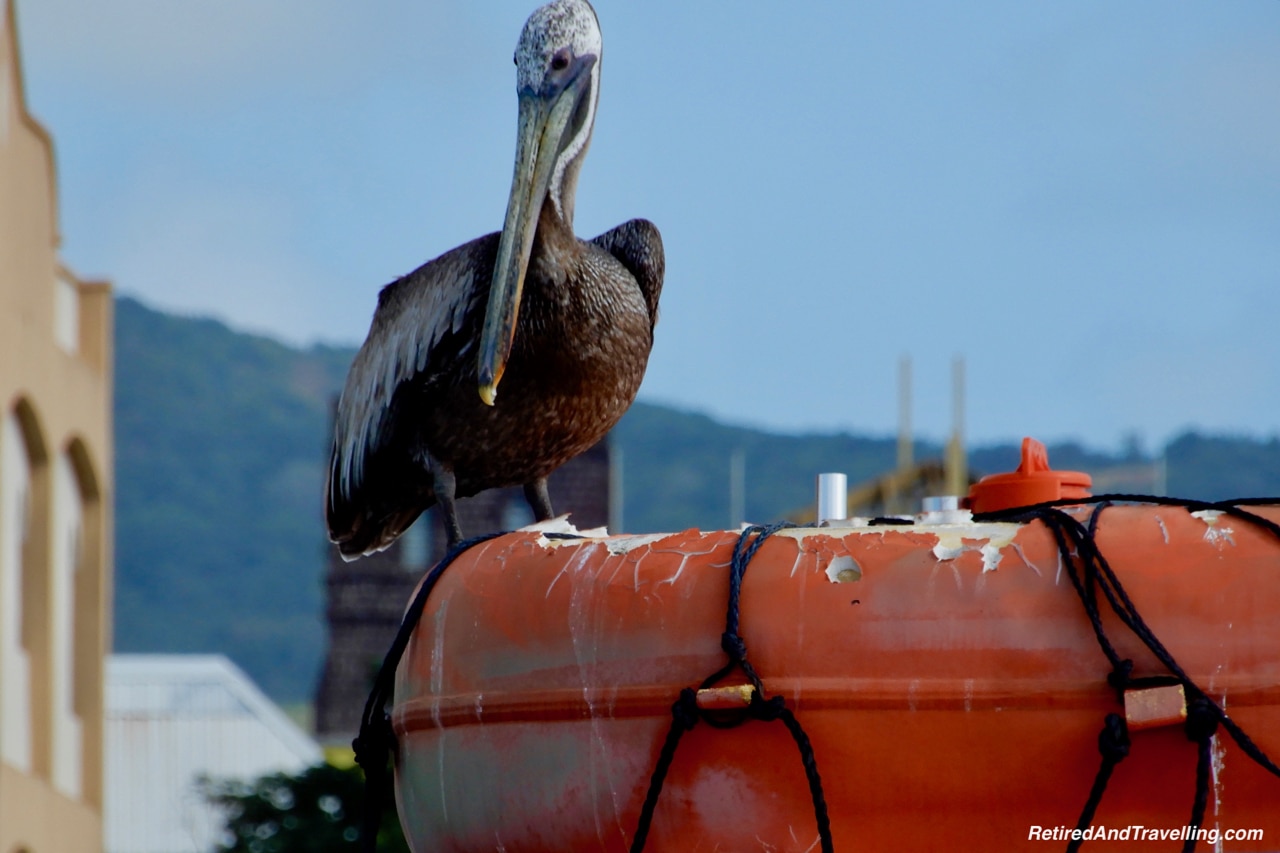 Heading To The Sky Safari Zipline Base

It was about 6 miles to get from the dock to the Sky Safari zipline ride in St Kitts. But it felt much longer. Our driver did a good job of providing information on the island of St Kitts. He dealt with the questions flung at him as we drove.

We turned off the main road and went up the small road into the zipline facility. The first step was to sign away all our rights on the liability sheet. We were weighed in and all given the green light to proceed. Our great guides for this adventure Plastic and Dilly Dilly introduced themselves. They kept us psyched through the adventure and were continually pulling our legs. The monkeys really do not give you a speeding ticket if you travelled too fast!

Next we got our gear. This was a unique zipline ride in St Kitts. We were outfitted with a helmet and a harness that you could sit in. Everyone was issued a pulley mechanism that would then be attached to the lines. Several times we moved our pulleys from spot to spot.

We were taken to the first trial run and given our instructions. When we rode the zipline we could lean back and not really hold on. As we approached the end, we needed to slow our ride down. Hands up on the top, legs up and spread and leaned back we were supposed to slow down. A giant spring then caught you and dissipated the forward motion. 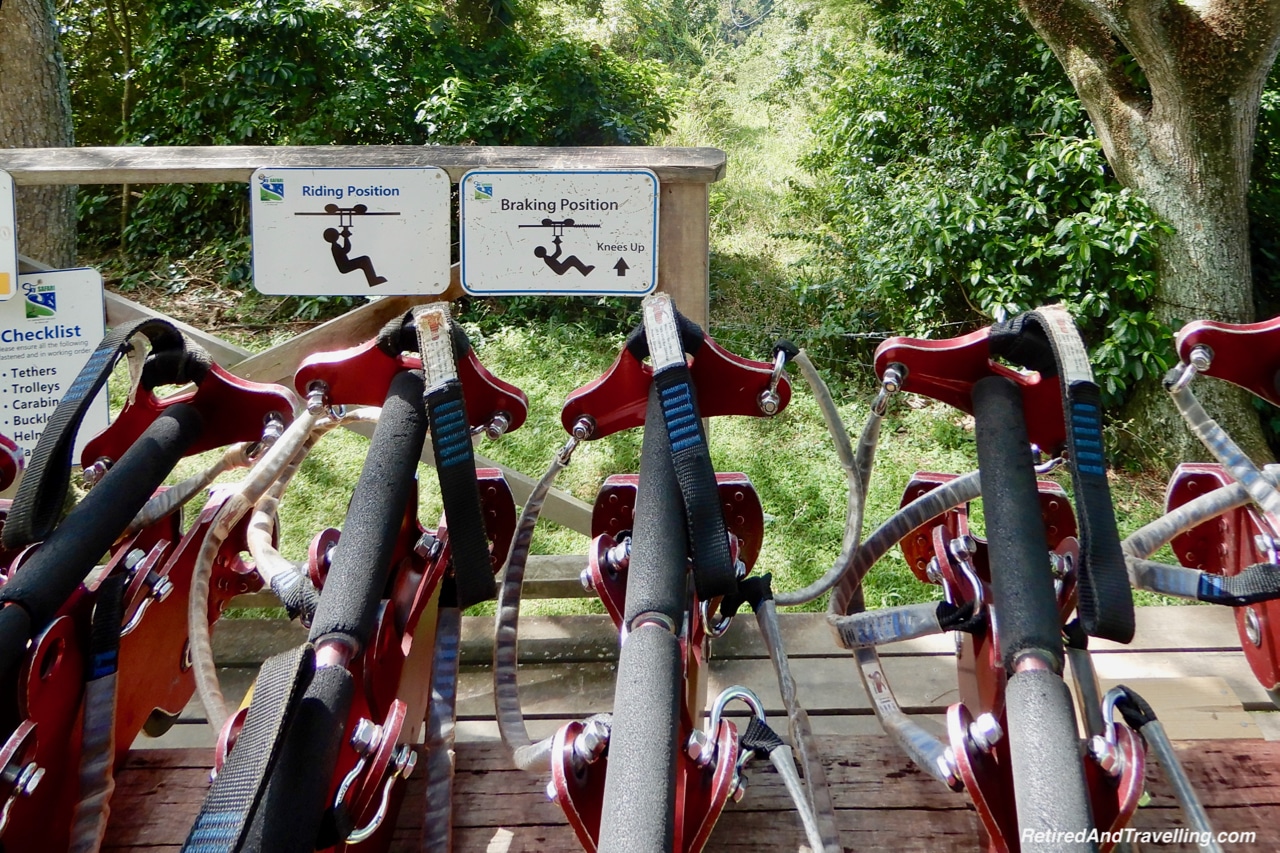 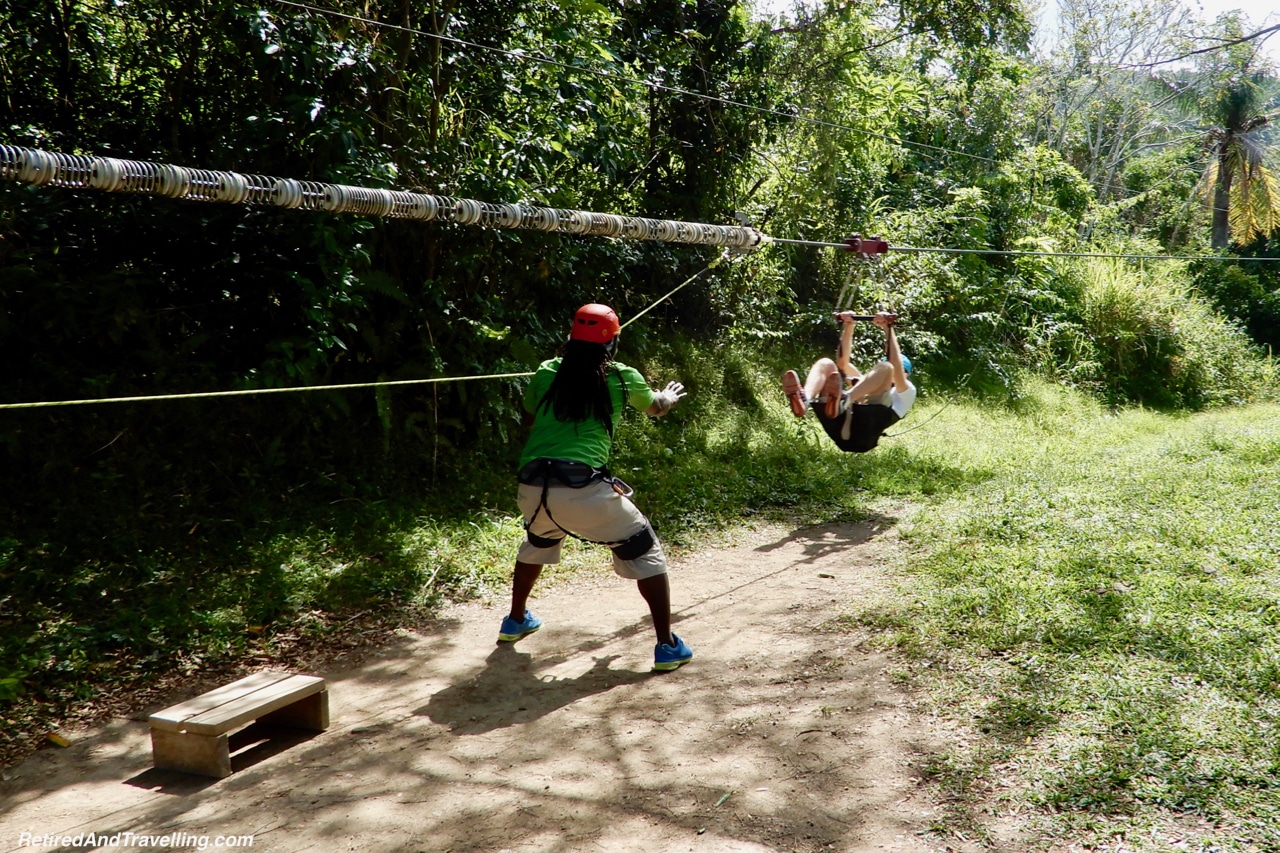 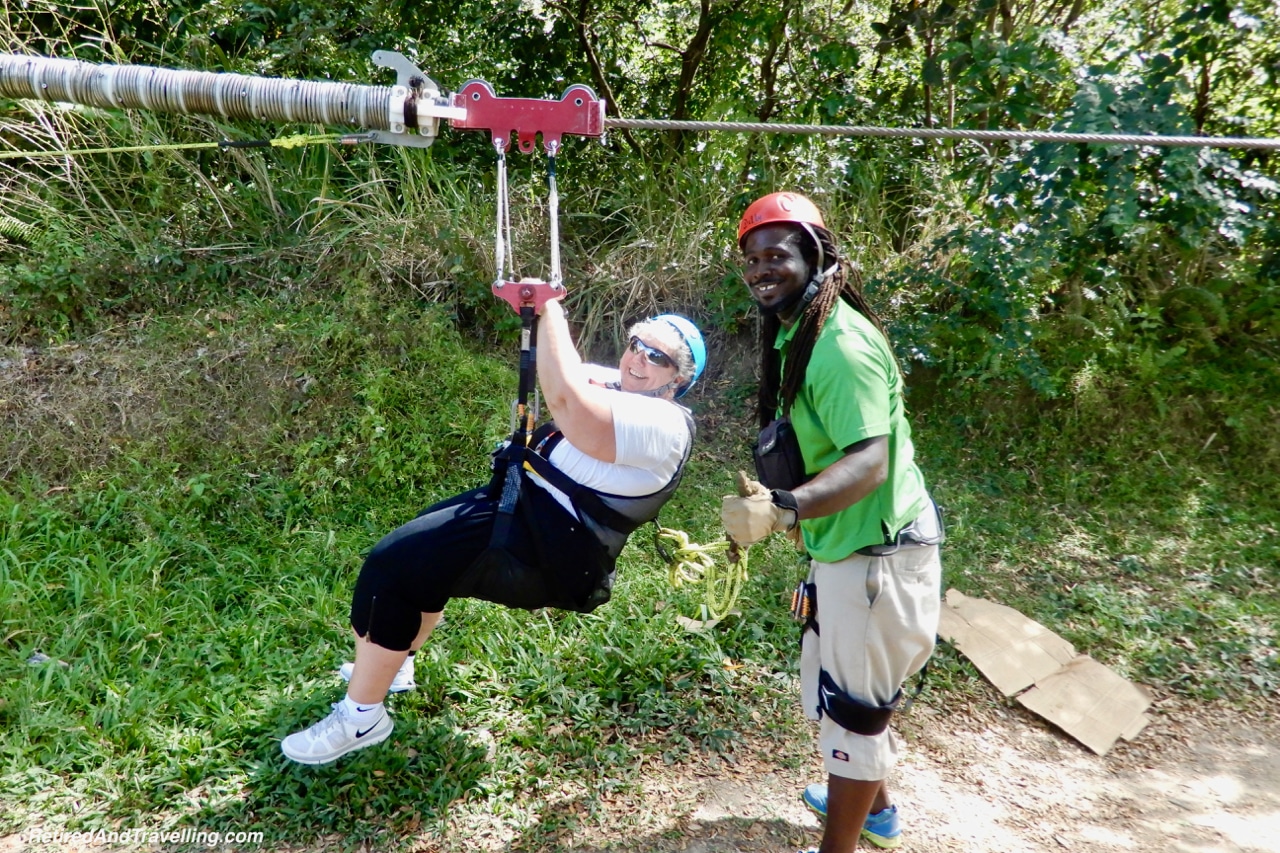 The first two brave souls got up on the platform for the first ride. It was a short ride, barely down hill. It was meant to give you a sense of the ride and stopping. David went before me so that he could catch the look on my face. 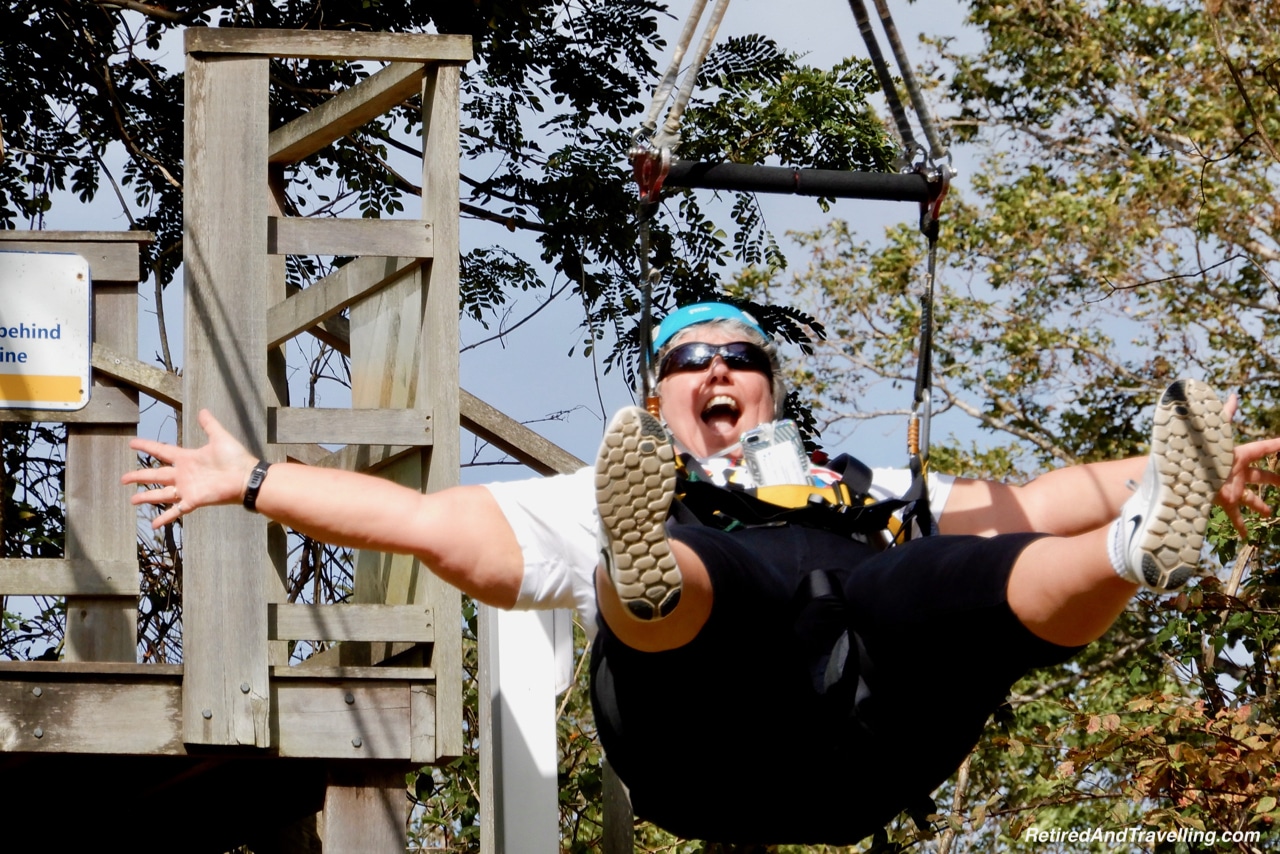 Everyone made it across the first run. And nobody decided to back out.

We boarded an old truck to get up the hill to the first major zipline run. The ride up the hill was bumpy and probably worse than any of the zipline runs. The first zipline run was a long one out high over the tree tops. We soared away, arms wide open. But I may have been having too much fun on that first run. I was not slowed down enough and got a big bounce when I hit the springs. For all other runs I made sure to slow down. 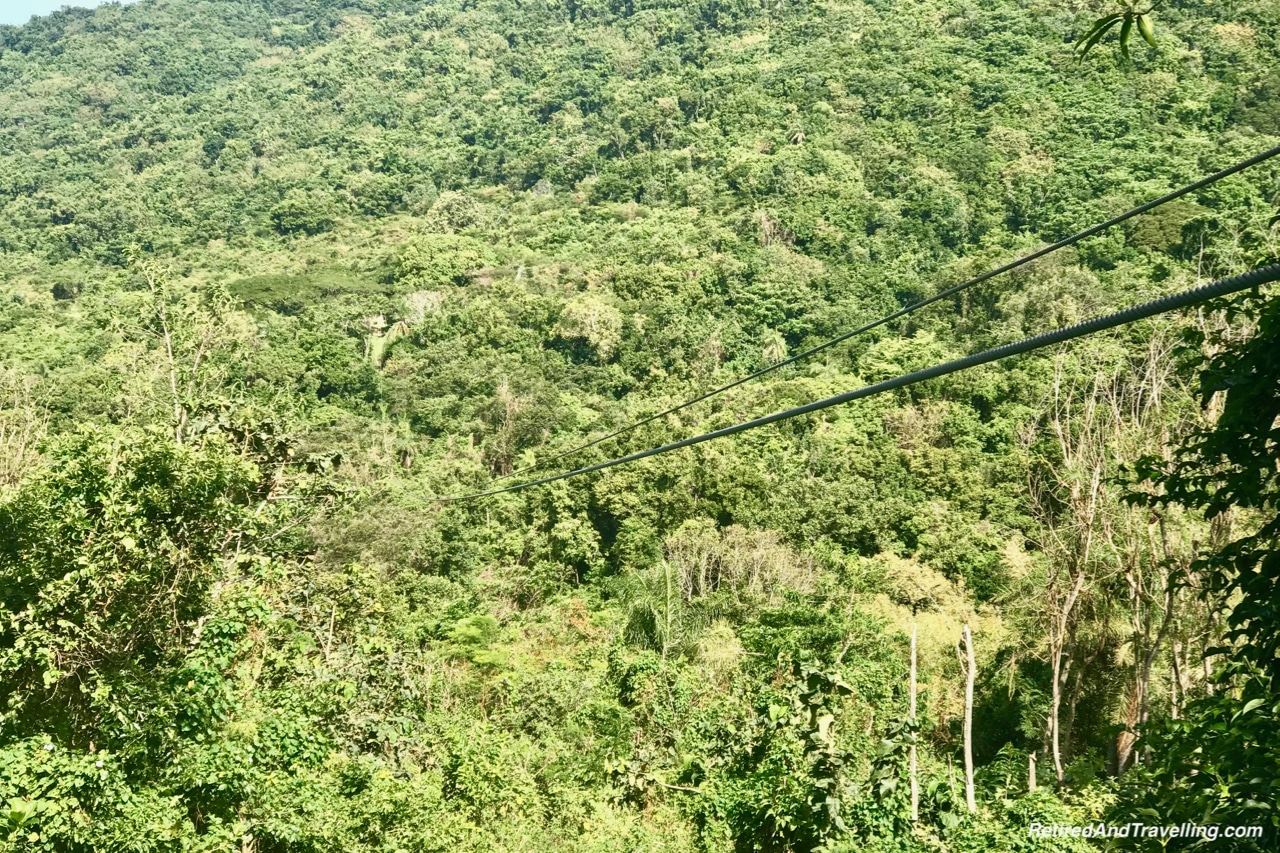 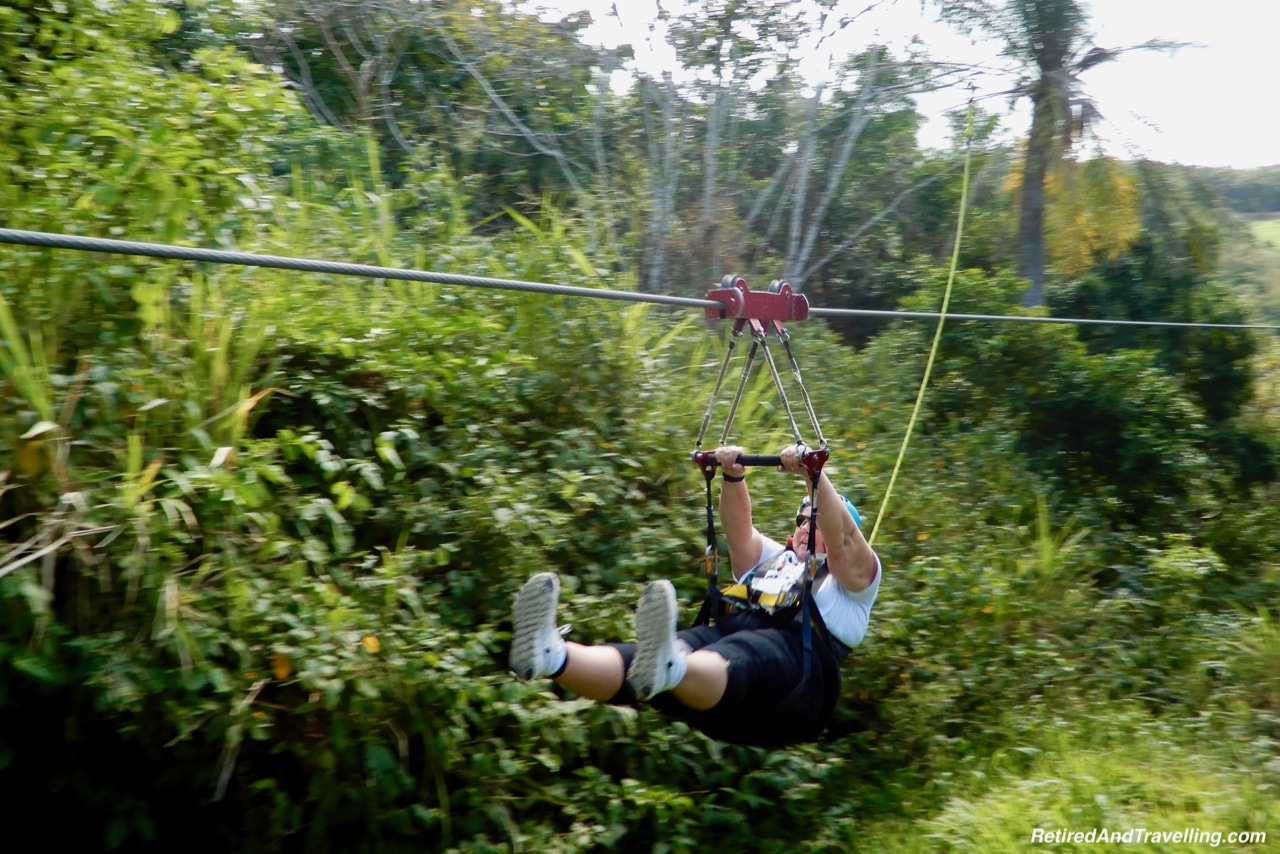 The second high run was a shorter line but faster. We hooted and hollered down the run. We then walked a short distance for the next run. I caught David as he shot off into the wild. 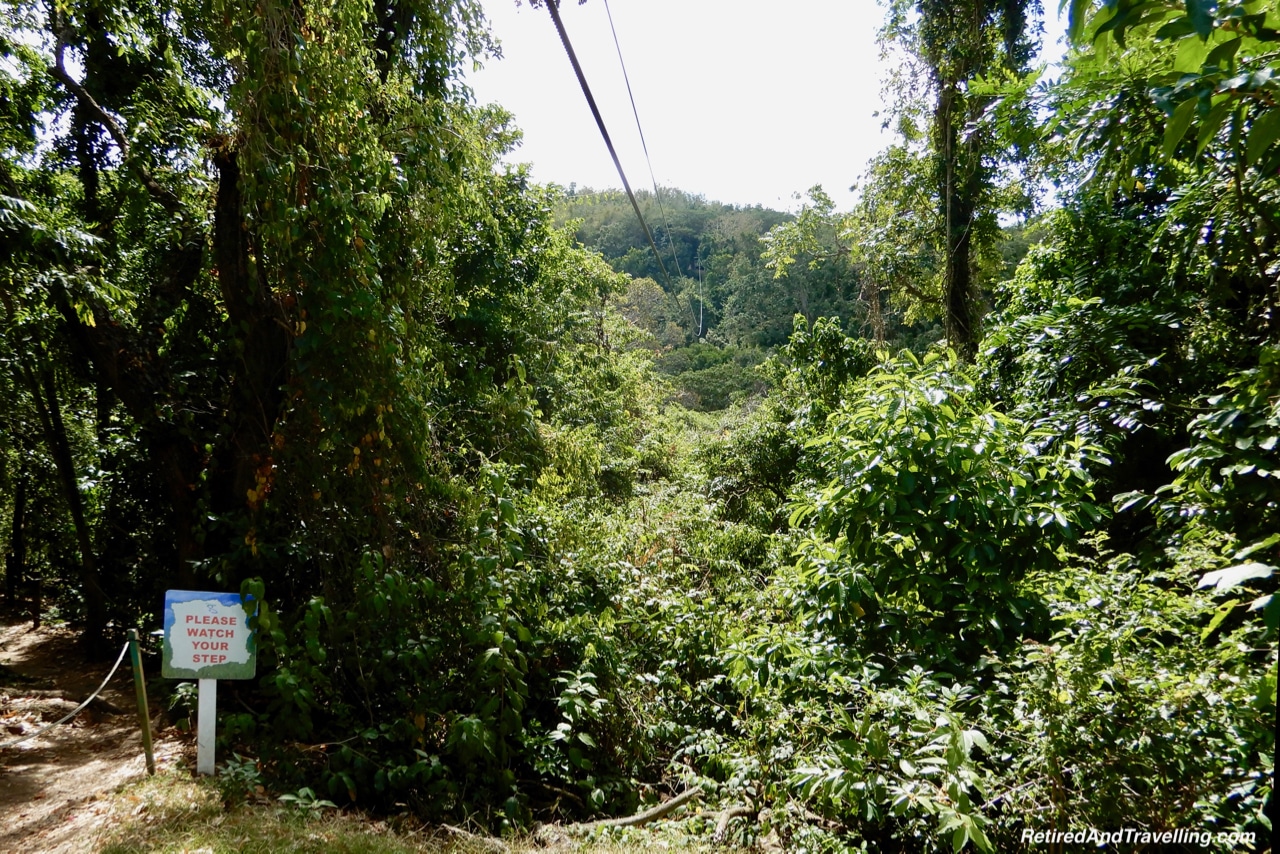 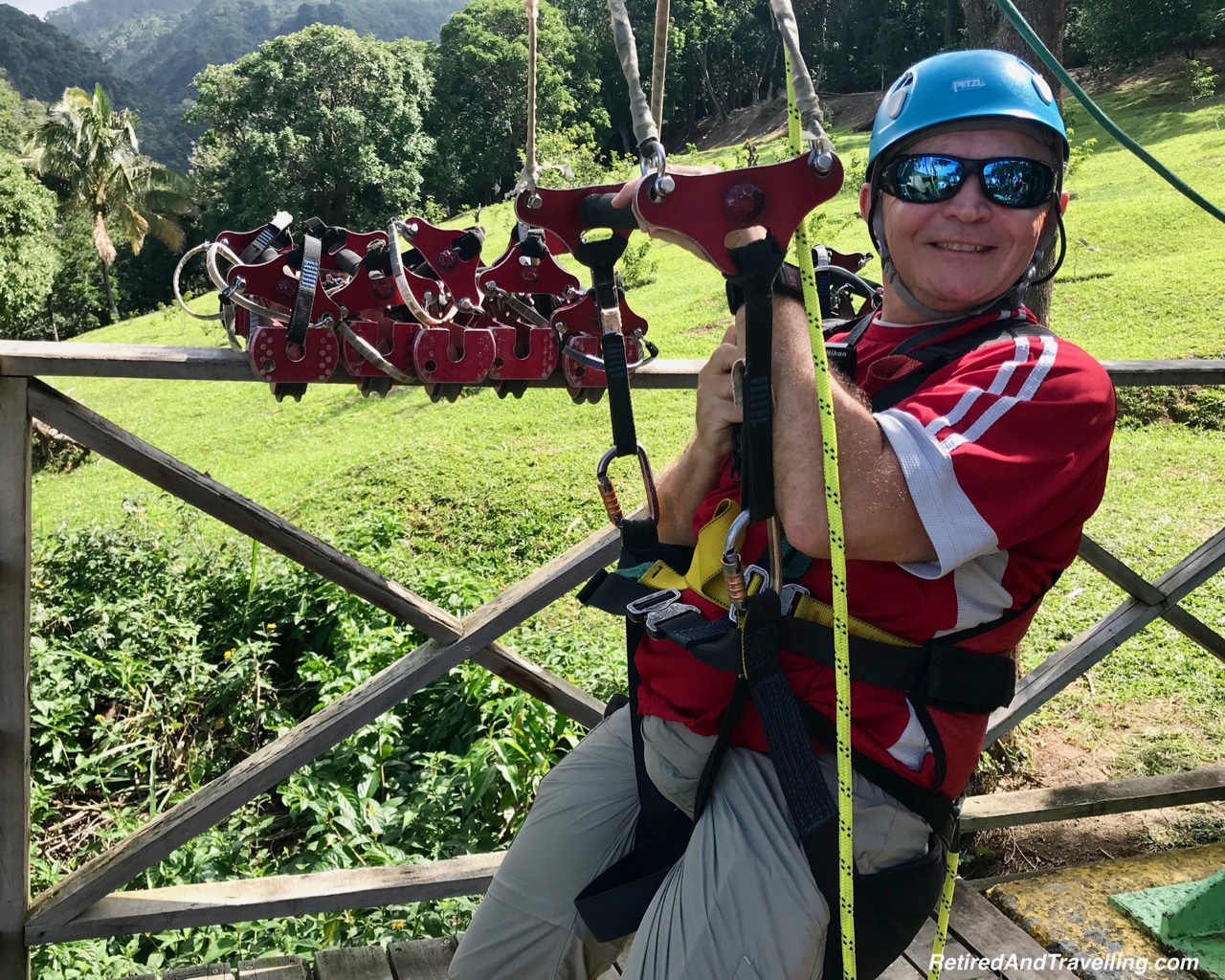 For our final run, we had a hike through the rainforest first. Along the way our guides gave us information about the local fauna. The last zipline was a double. David and I went at the same time. 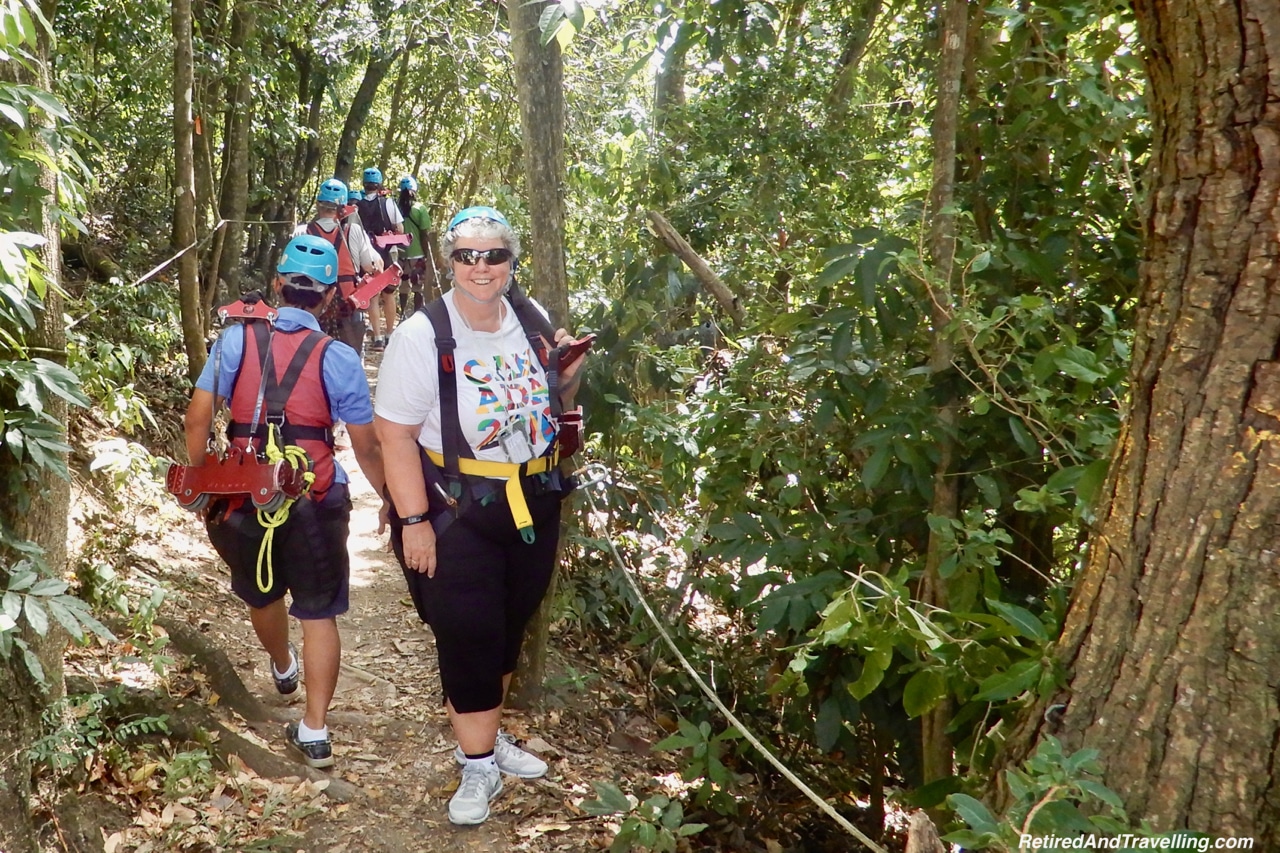 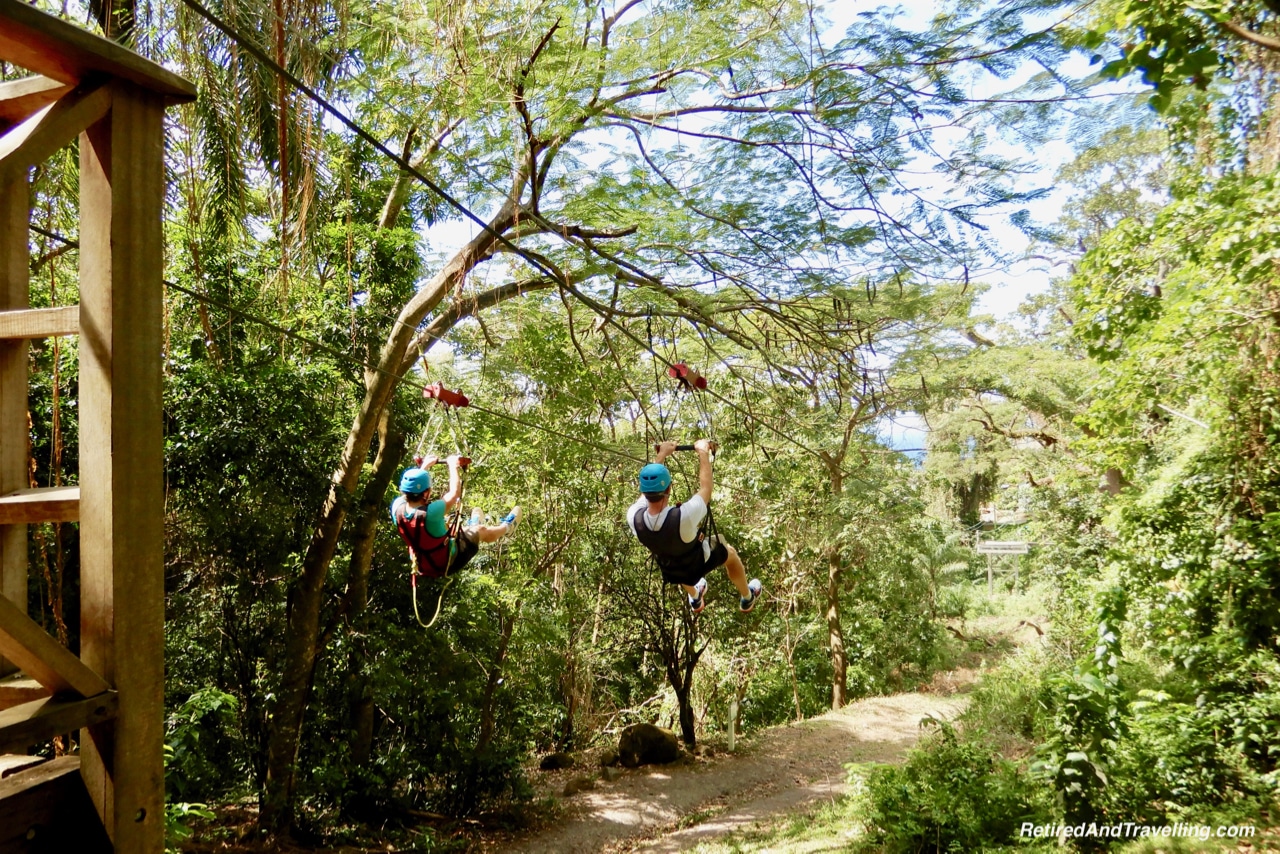 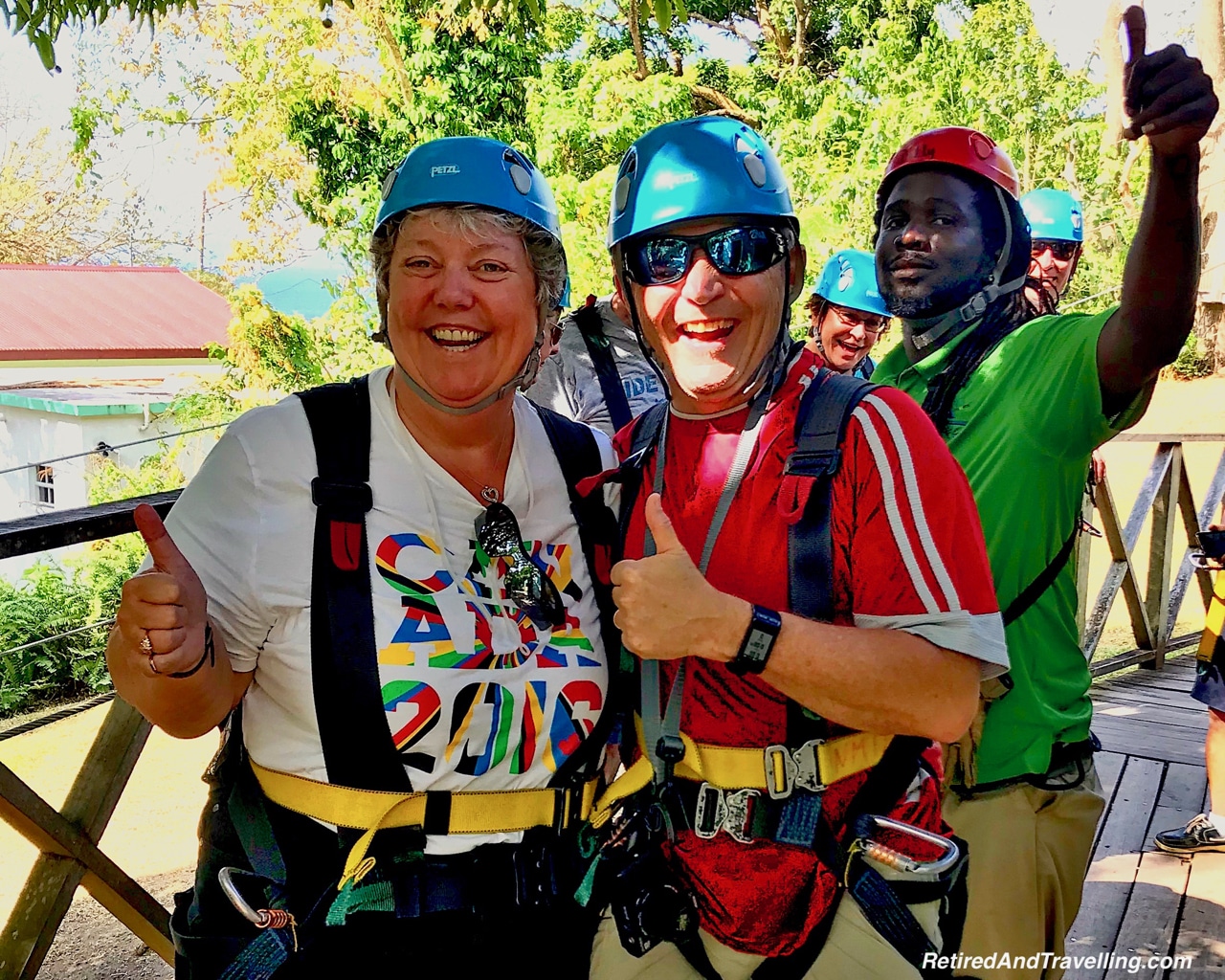 David’s watch kept track of our elevation changes during the rides. It was fun to look at it when we were done. We had such a blast doing the zipline ride in St Kitts. It was the first time for me and a great way to start. 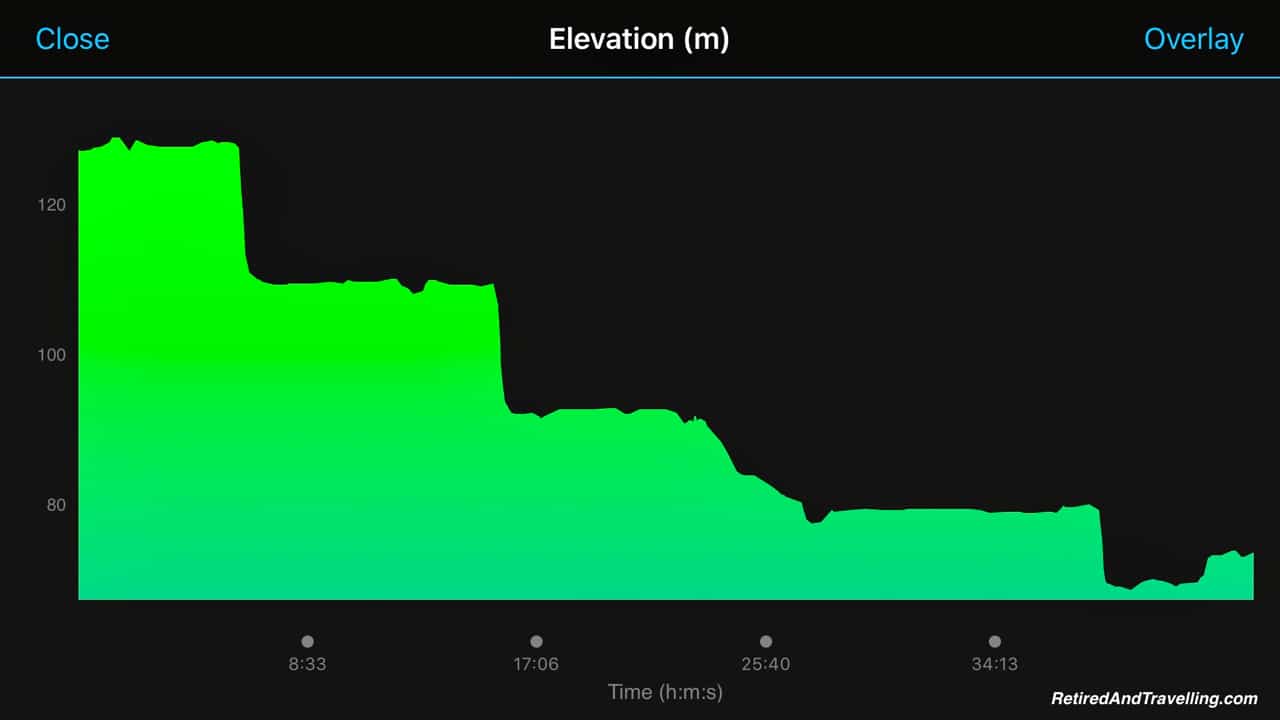 A Tour Of The Plantation

Once we turned back our gear, our guides took us for another walk through the former Wingfield Estates sugar plantation. Sugar cane is no longer processed on the island. But the chimneys and production equipment from this former time were seen everywhere. 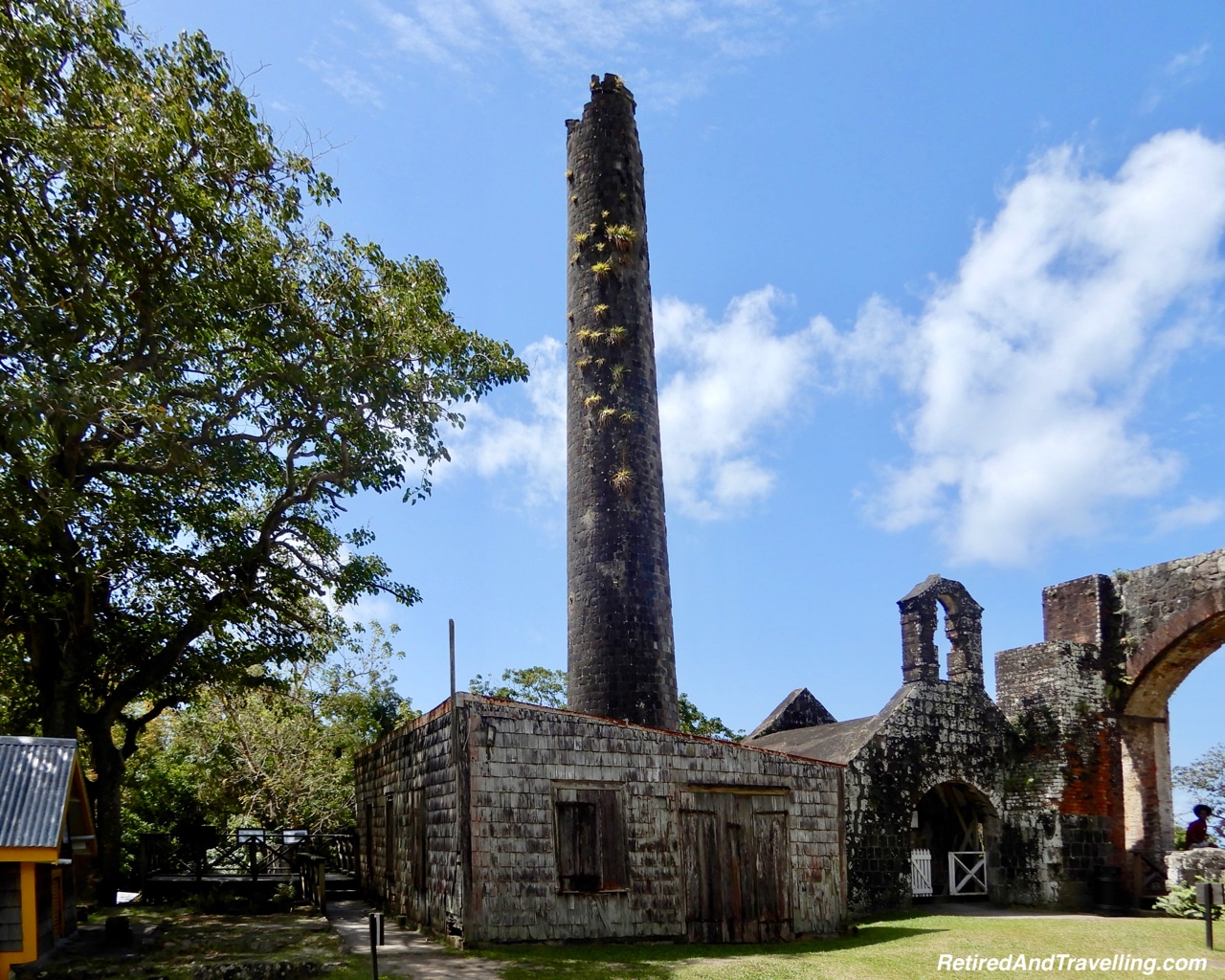 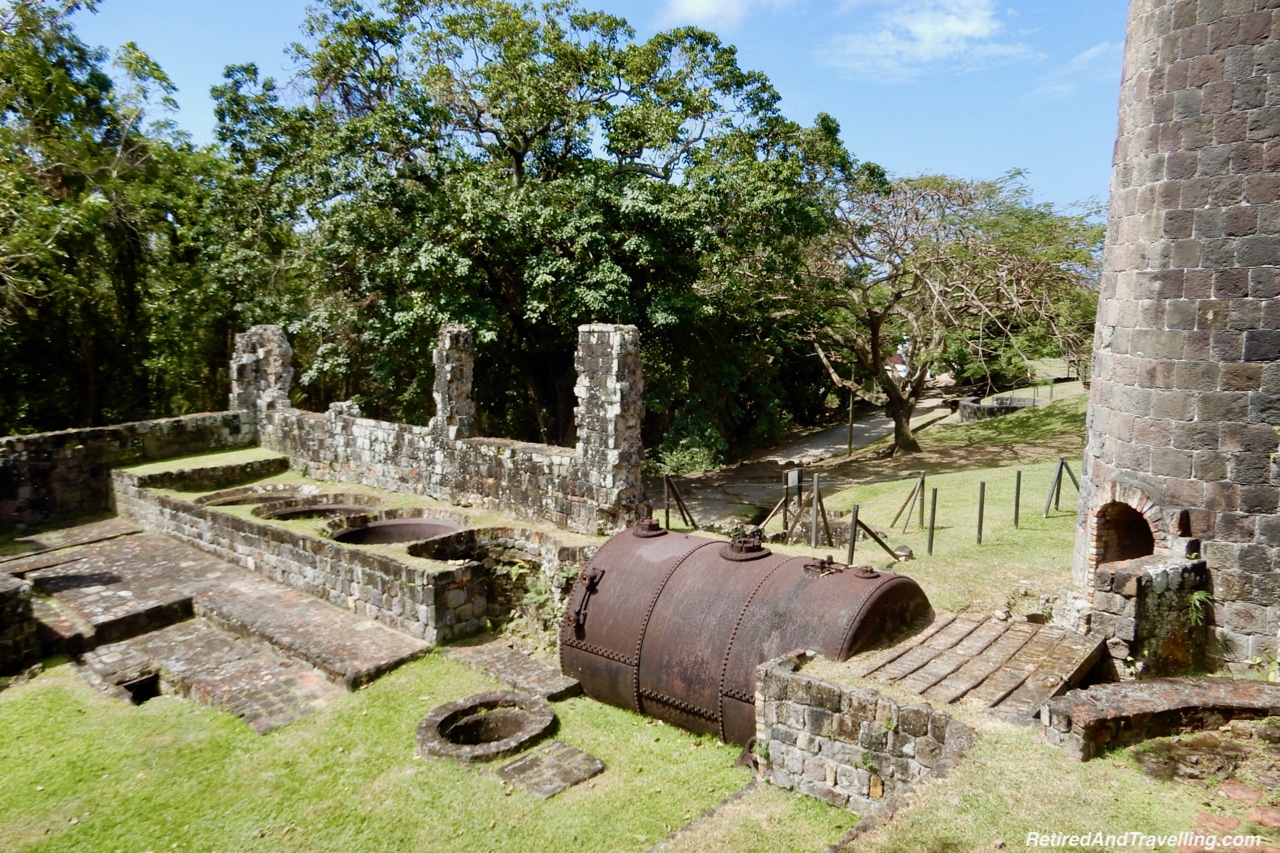 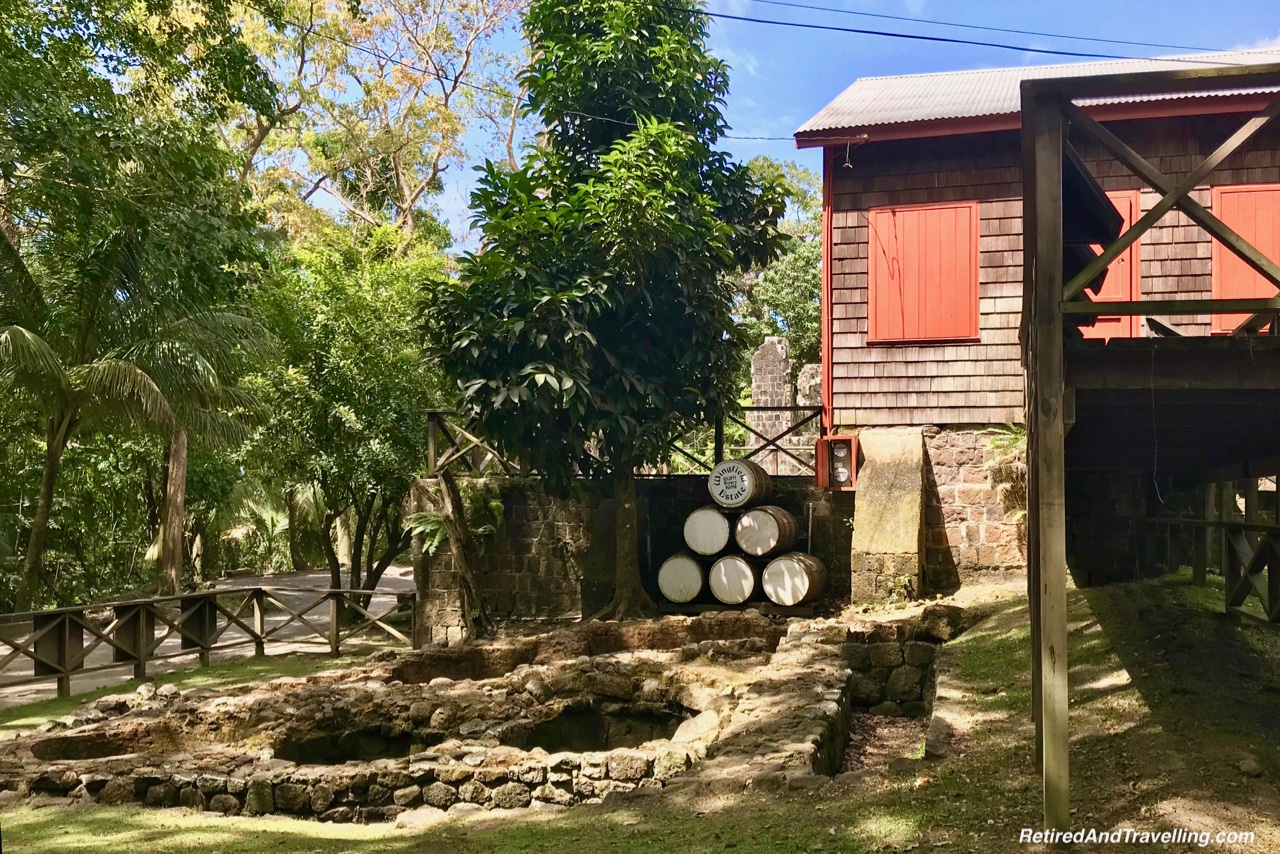 We did not see monkeys on any of the zipline runs. But as we walked through the plantation, two monkeys were spotted high in the trees. We were not sure who was watching who. 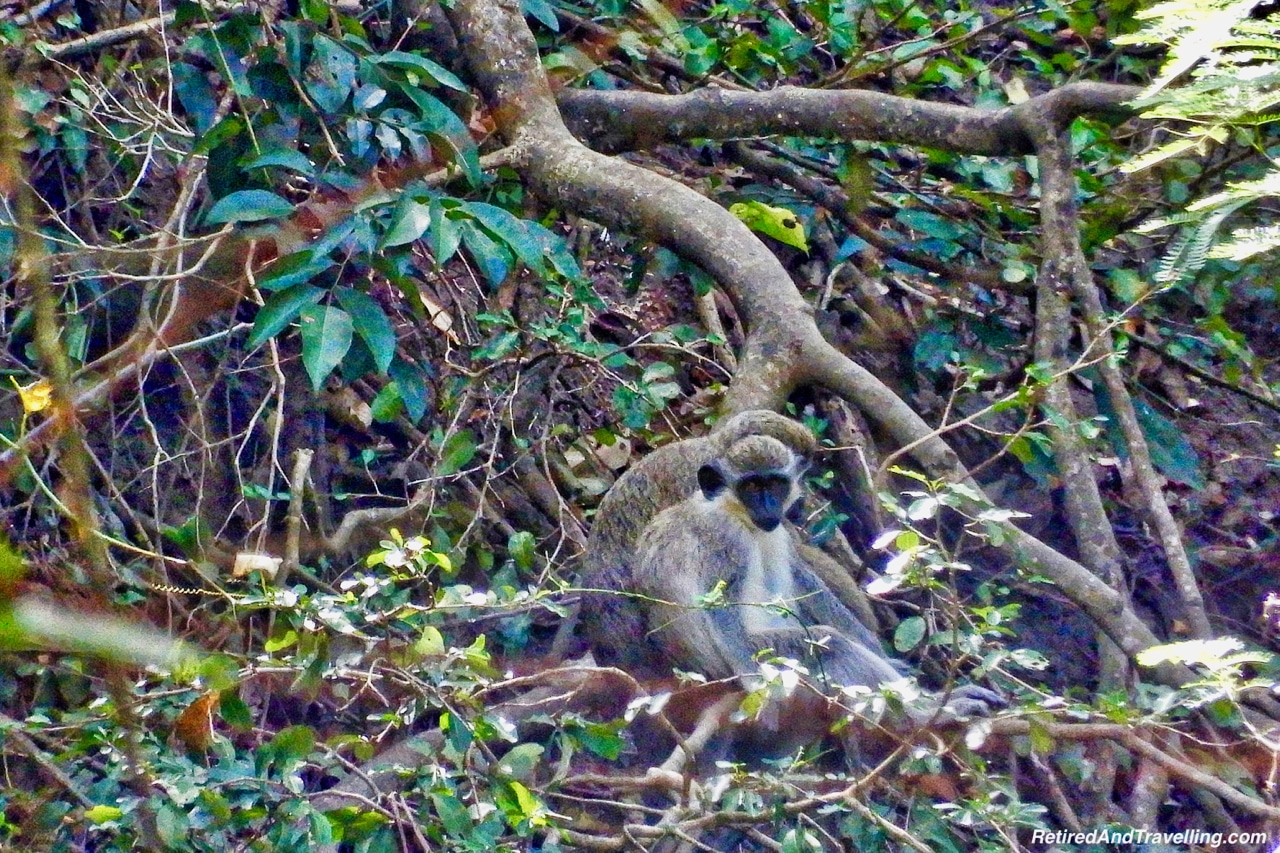 We walked up to the viewpoint out to sea. The grounds were well manicured with flowers and fountains. There was an enormous old tree in the garden, complete with words of wisdom. 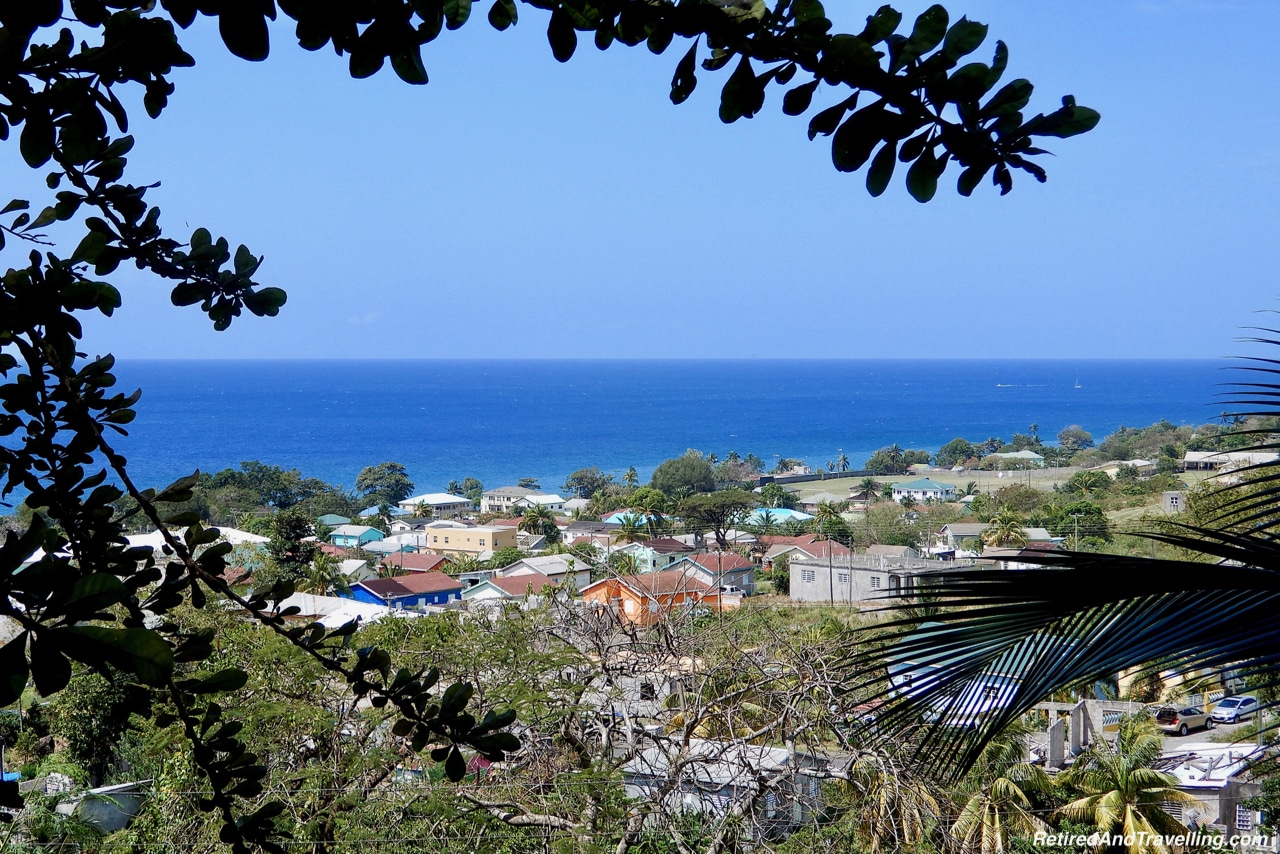 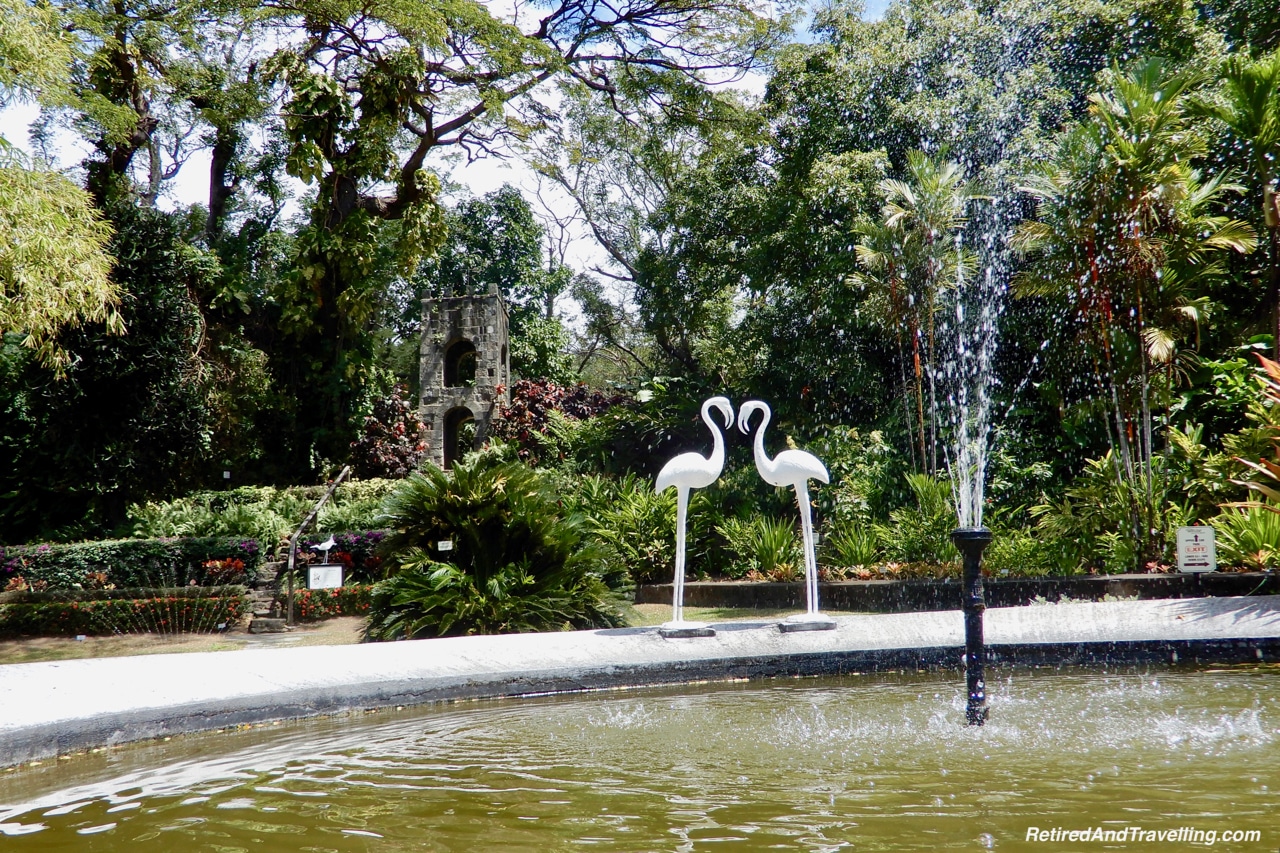 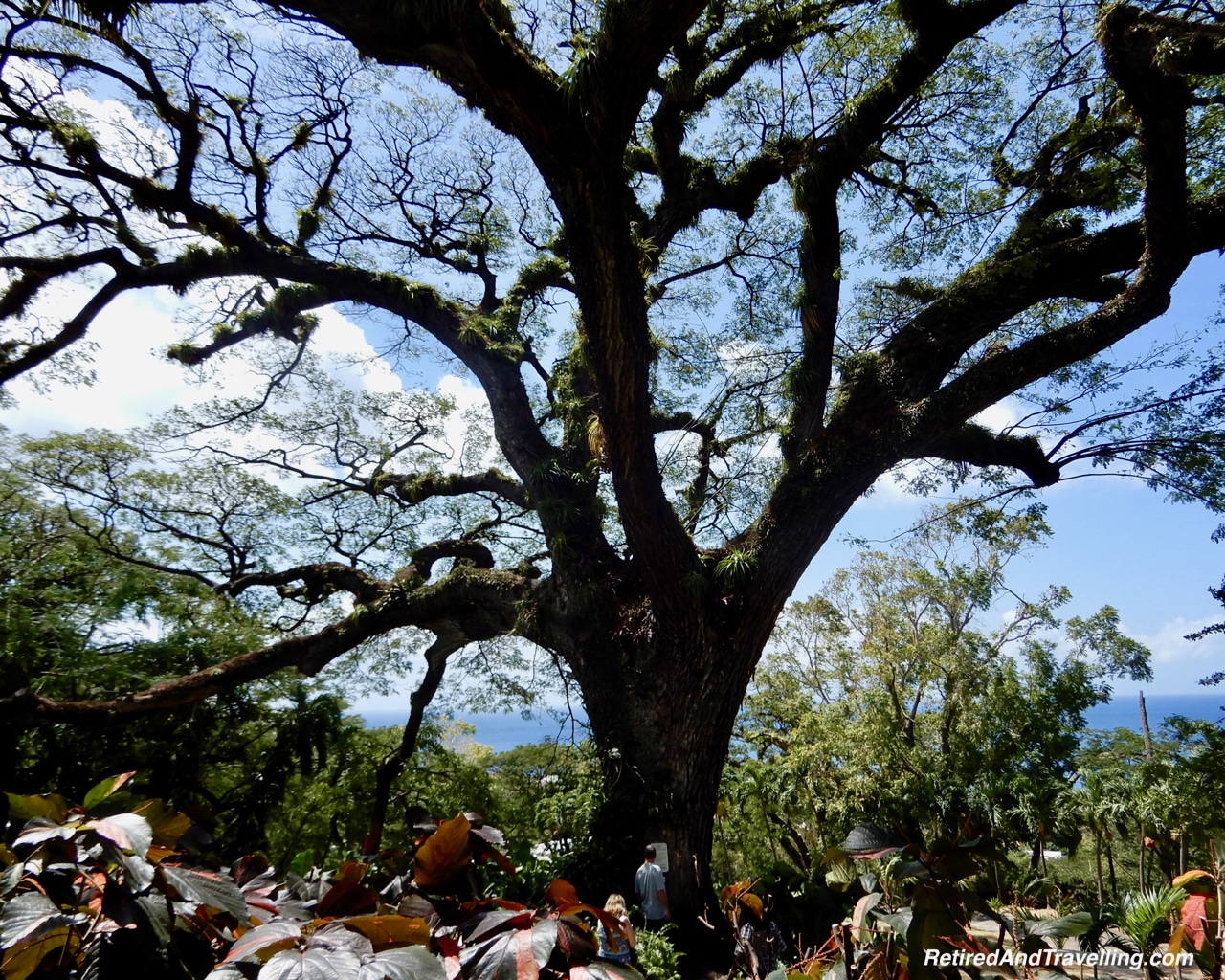 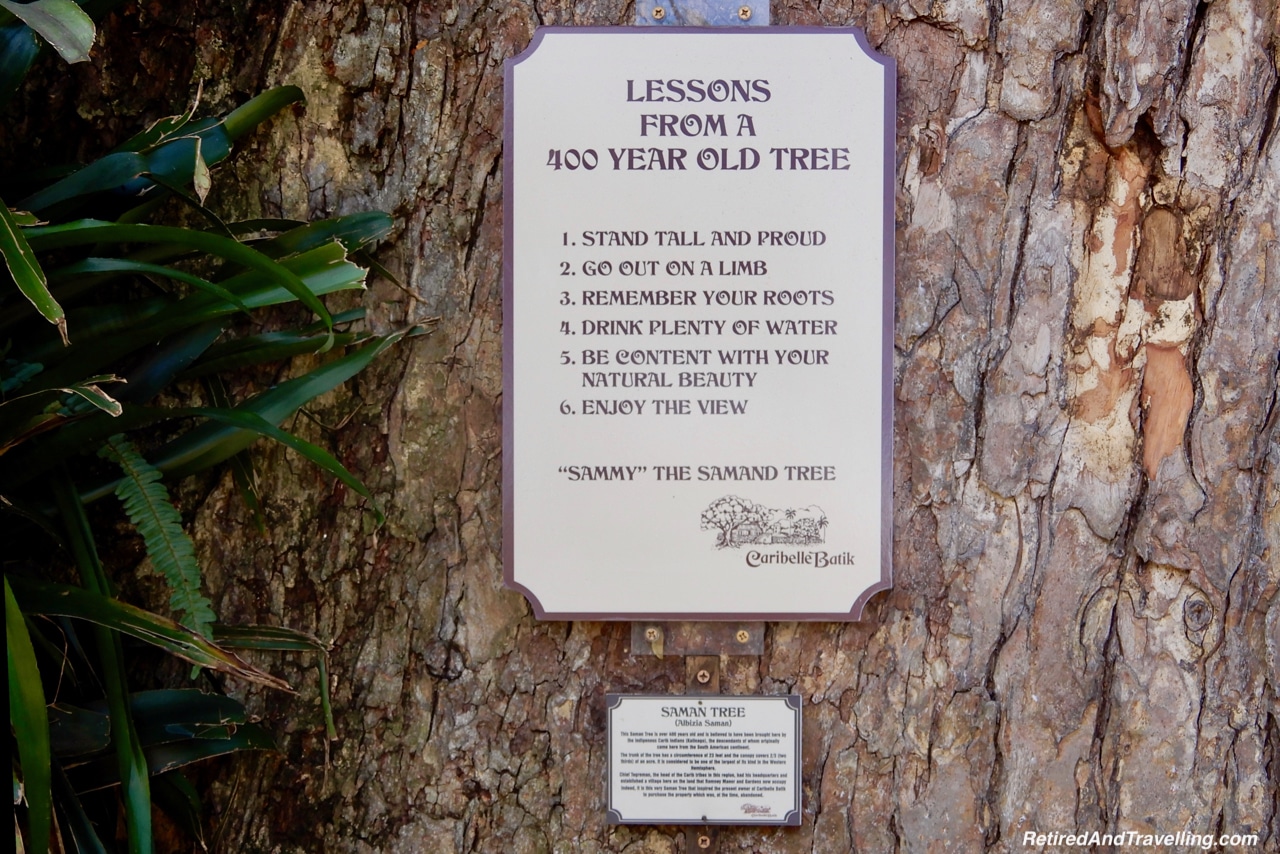 We kept walking to the gift shop. No excursions was ever complete without a stop to shop. We got a quick demonstration of the making of batik. There were some gorgeous pieces in the store. 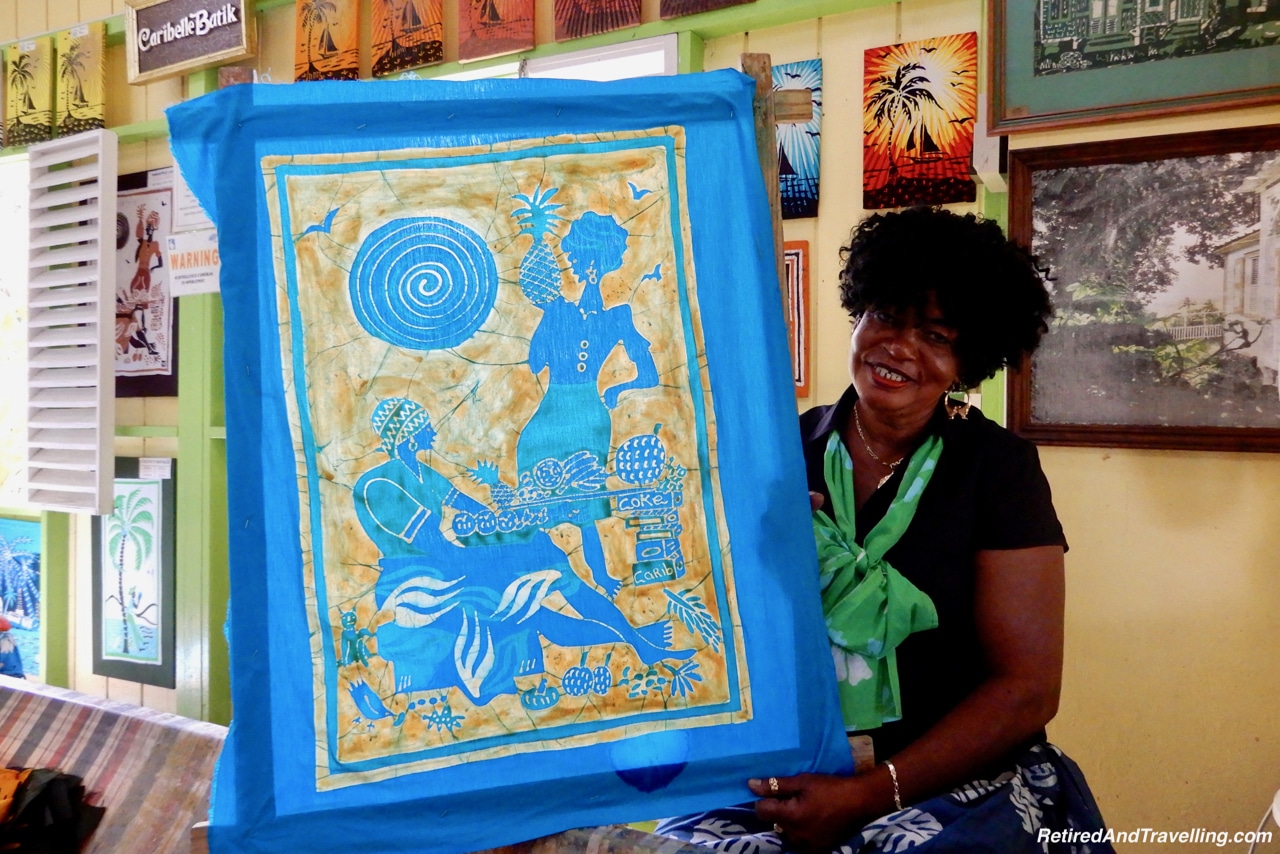 A rest stop let us cool down before we got back in the van. We would have loved a cold beer, but that was not on our carb friendly diet. We were a much more subdued crowd on our ride back to the port. It had been a very fun morning on our zipline ride in St Kitts. And we were all ready for lunch.

A Short Walk In Basseterre

After we ate and relaxed a little, we headed back out in the tender for a short walk around the town. Other people on our tender headed out in search of a beer bargain. They could get 3 beers for $5. But there was no beer for us on our low carb diet. 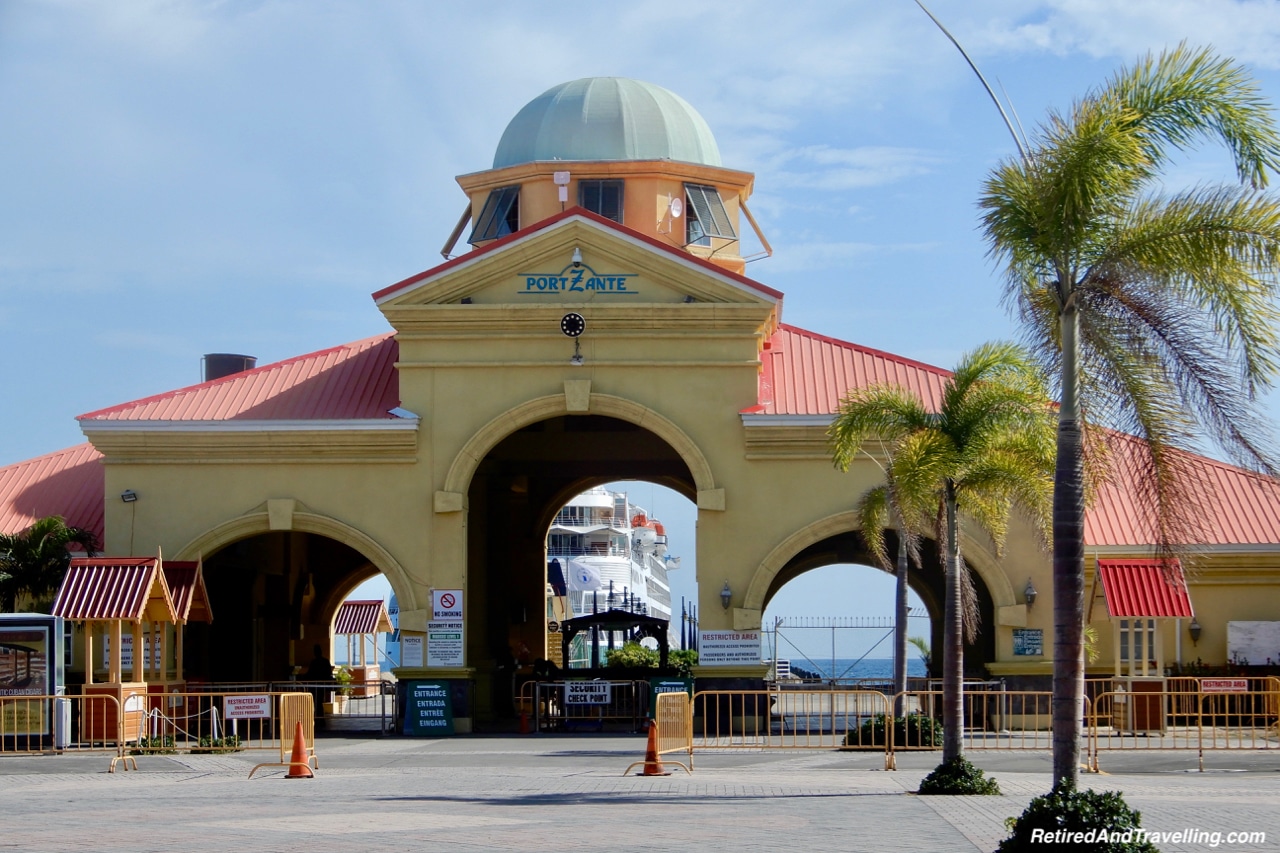 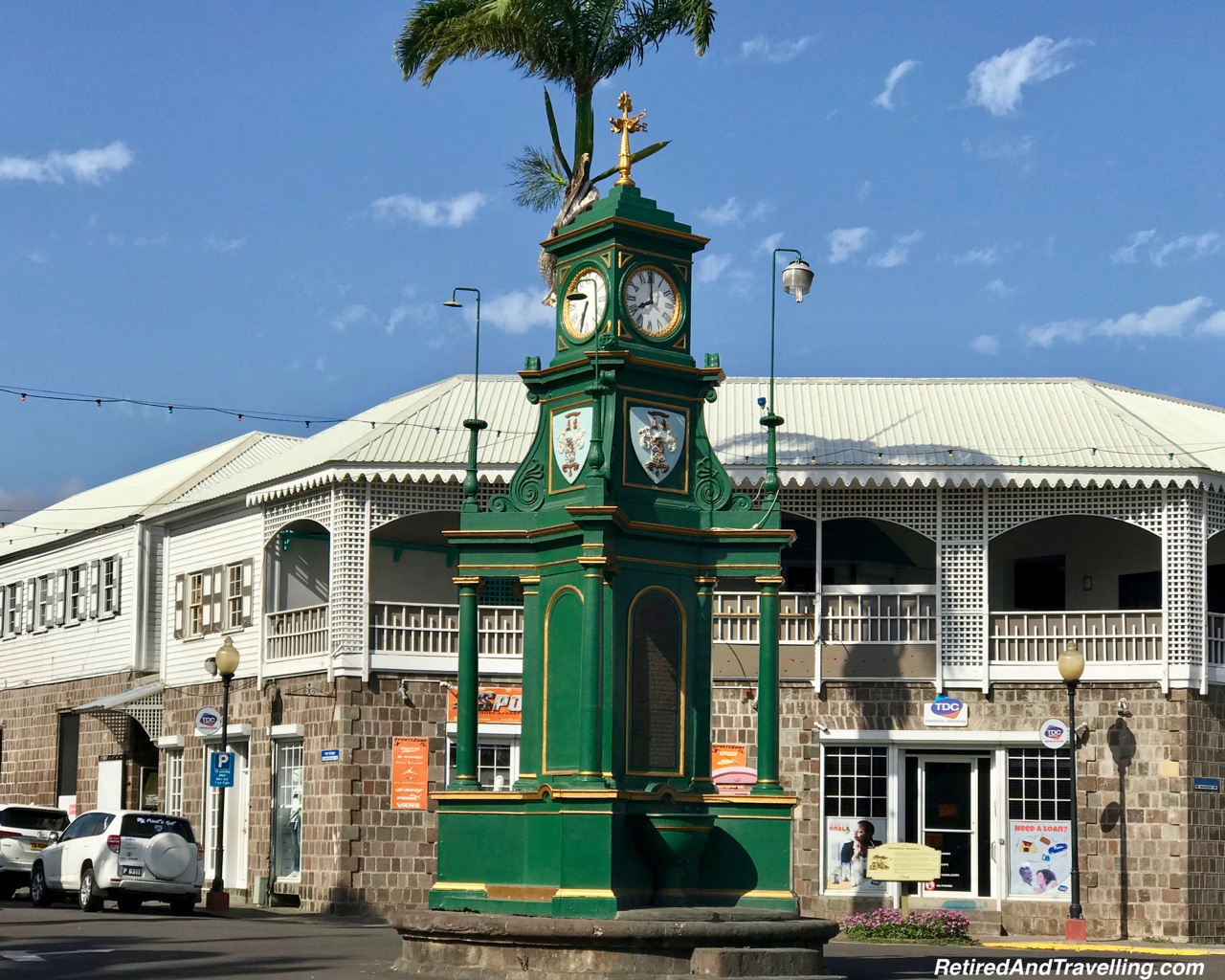 We had pinned a coffee shop on our offline maps and that was our target. A full hot and cold coffee menu met with our needs. And they had free wifi. This was the first cruise we had ever done without free wifi onboard the cruise ship. The cost to buy internet onboard the ship was prohibitively high. I carried both my international SIM and hotspot. Between the two devices, I could theoretically get connected in 7 of the 8 islands that we visited. Only St Barts had no coverage. But in most places, we were anchored out in the bay, often not a the main town or biggest island. So in reality, we ended up disconnected for days on end.

We sipped our drinks slowly and got caught up on the urgent emails that had accumulated in the two days we had no internet service. I was so far behind in my social media streams that I didn’t even try to catch up on the slow cafe speeds. I did not even attempt to try to address work on my blog. It would take me several days to recover when I finally got back home.

We caught the shuttle back to the ship before dinner.

A Great Adventure On Our Zipline Ride In St Kitts

We were so glad that we decided to do a zipline ride in St Kitts. It was a great place for our very first zipline. The runs were good and we really liked the sling seats. I particularly was glad that I did not have to do the braking with my hands. Our guides for the zipline ride in St Kitts were great and made every minute fun. We would definitely recommend this excursion if you visit St. Kitts.

Our next adventure planned for our Windstar Caribbean cruise was to scuba dive in Grenada.  From the top of the trees to the bottom of the seas!

Have you done a zipline ride in St Kitts? What did we miss by spending the morning flying high? 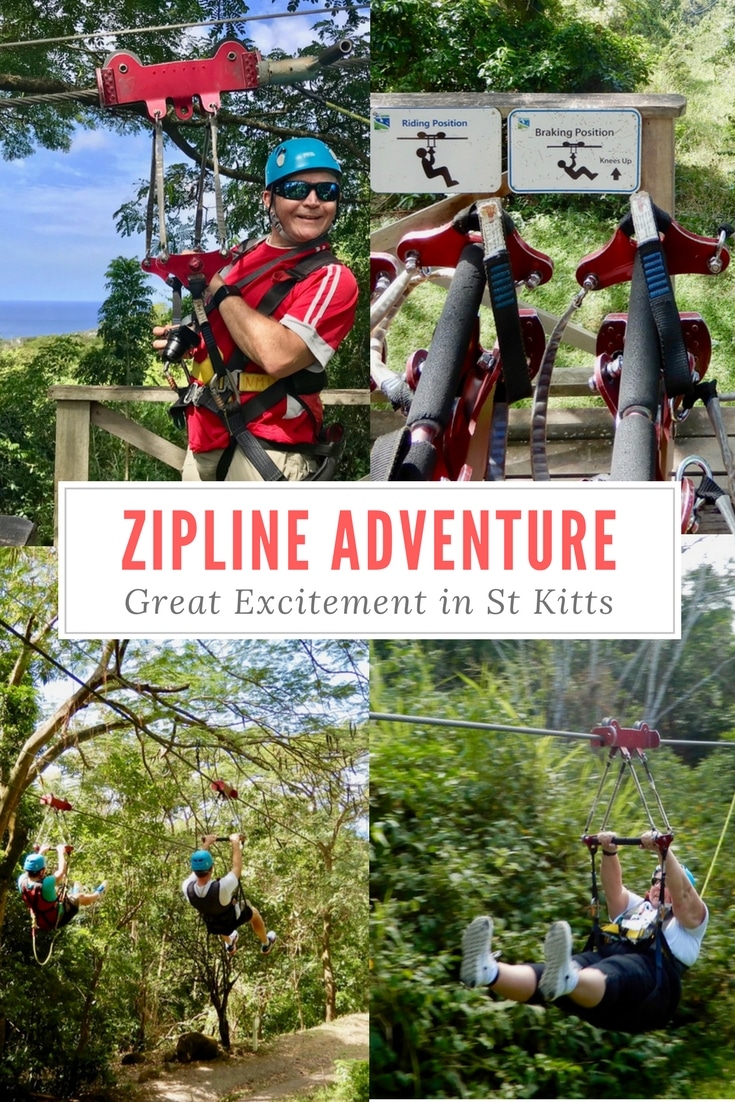