Snorkelling Out The Back Door on Cable Beach In Nassau

We were back in sunny and hot Bahamas in July. We are fortunate to have a great friend with a condo on Cable Beach that has a pool at the back and a wide expanse of white sand beach. The waters are crystal blue outside the front patio. We can indulge our water baby selves whenever we want. Having spent all of February in Nassau, we were excited to see the near shore artificial reef . It is located on the breakwater and we wondered how it had developed since our last trip. This would determine how much snorkelling we would do close to home. Or how much we would head off to great snorkelling spots around the rest of New Providence Island. When we found that we could snorkel with turtles right off our beach, we stayed close to home!

Walking along the beach we could see shapes moving in the water. David initially thought they were just buried debris. But after we went snorkelling we would know that below the water outside our door was a varied and active sea life. We could snorkel with turtles and rays!

I needed my thin 1mm skin for cold protection in February. I was still wearing it in July for sun protection. Snorkelling was a good part of our daily exercise. We often stayed out in the water swimming for close to 90 minutes. The tourists on the nearby Breezes resort on Cable Beach would sit on the beach and in the water for most of all day. But I did not want to become unrecognizable from a cooked lobster. One day we even saw a small boat pulled up on our stretch of beach. This might be a good option for us if we wanted to pay for a trip out to the nearby Sandals island.

All geared up, we headed out from the beach. The target was the rock breakwater in front of the new Baha Mar Resort development. 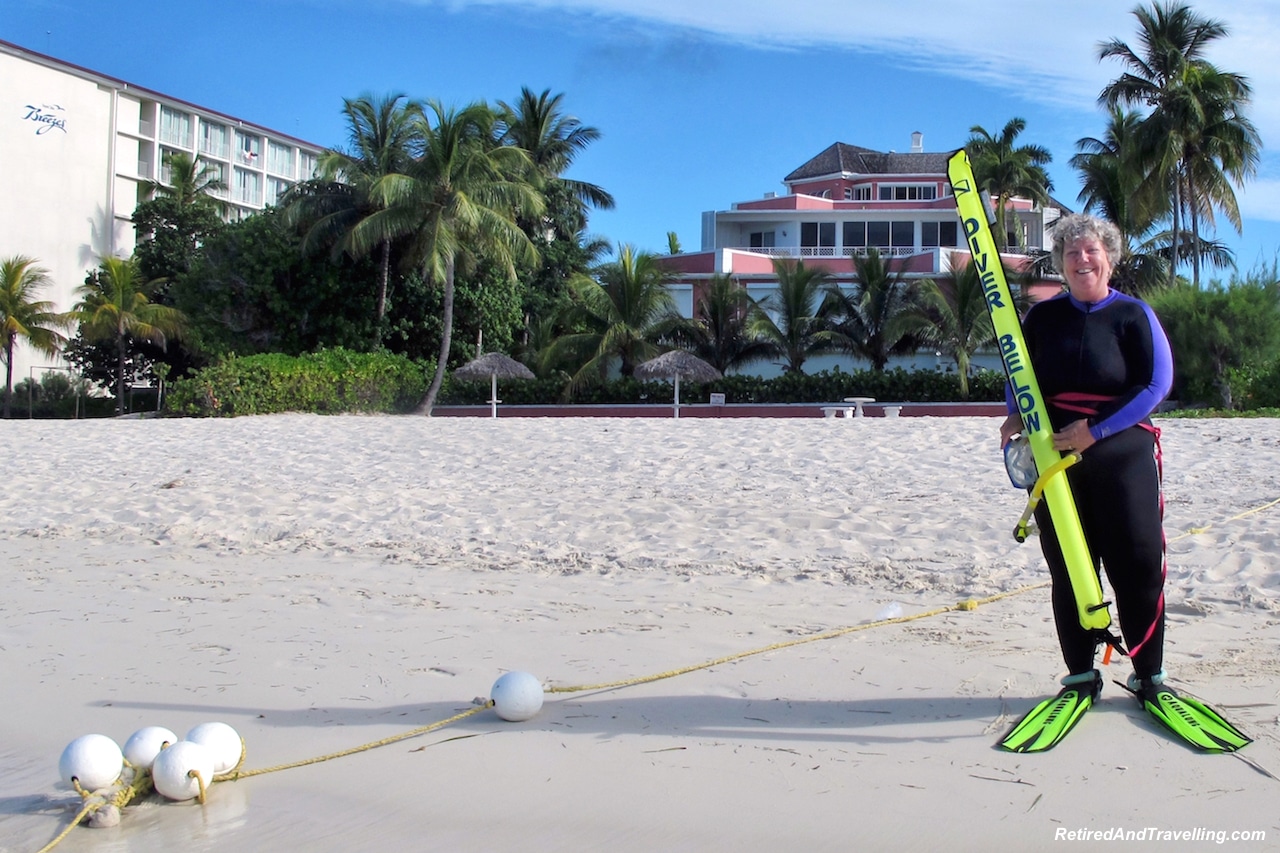 The waters were crystal clear on most days and offered great visibility. After only a few minutes, we saw our first green sea turtle. It was startled by our approach and swam off complete with remoras attached. David chased him for a while to get a good shot in case this was a fluke. We should not have worried. 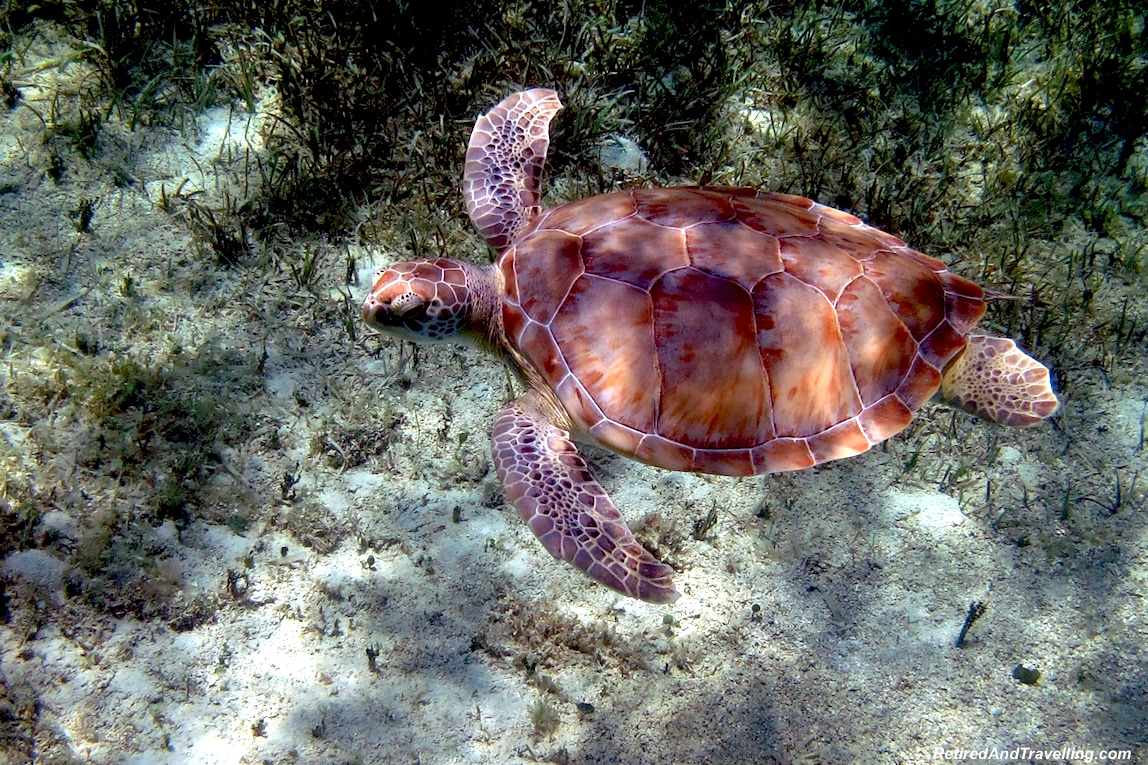 During the course of 10 days, we could snorkel with turtles almost every time we went out. Sometimes they were alone with their remoras stowaways. And sometimes they travelled in pairs. 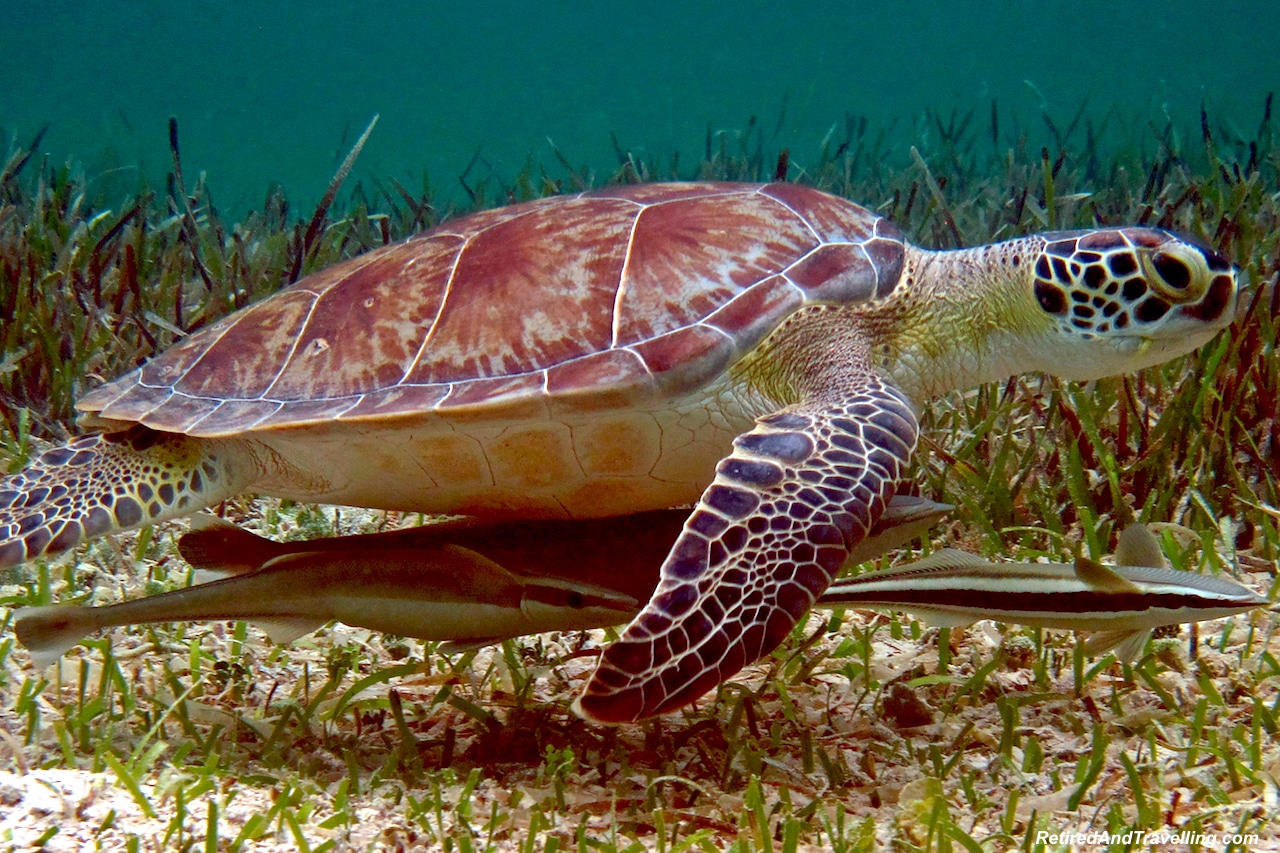 Finding Rays When We Snorkelled

The turtles got us excited. But we were also delighted to find that the rays had come back to this part of Cable Beach. In February, we caught sight of a huge spotted eagle ray circling the Baha Mar pier. But that was the only ray that we saw.

On this trip, we saw several smaller rays in different places. Once we were able to sit back and watch a Spotted Eagle Ray beat its head into the water over and over again. Apparently it did this to try to get at some food buried under the sand. 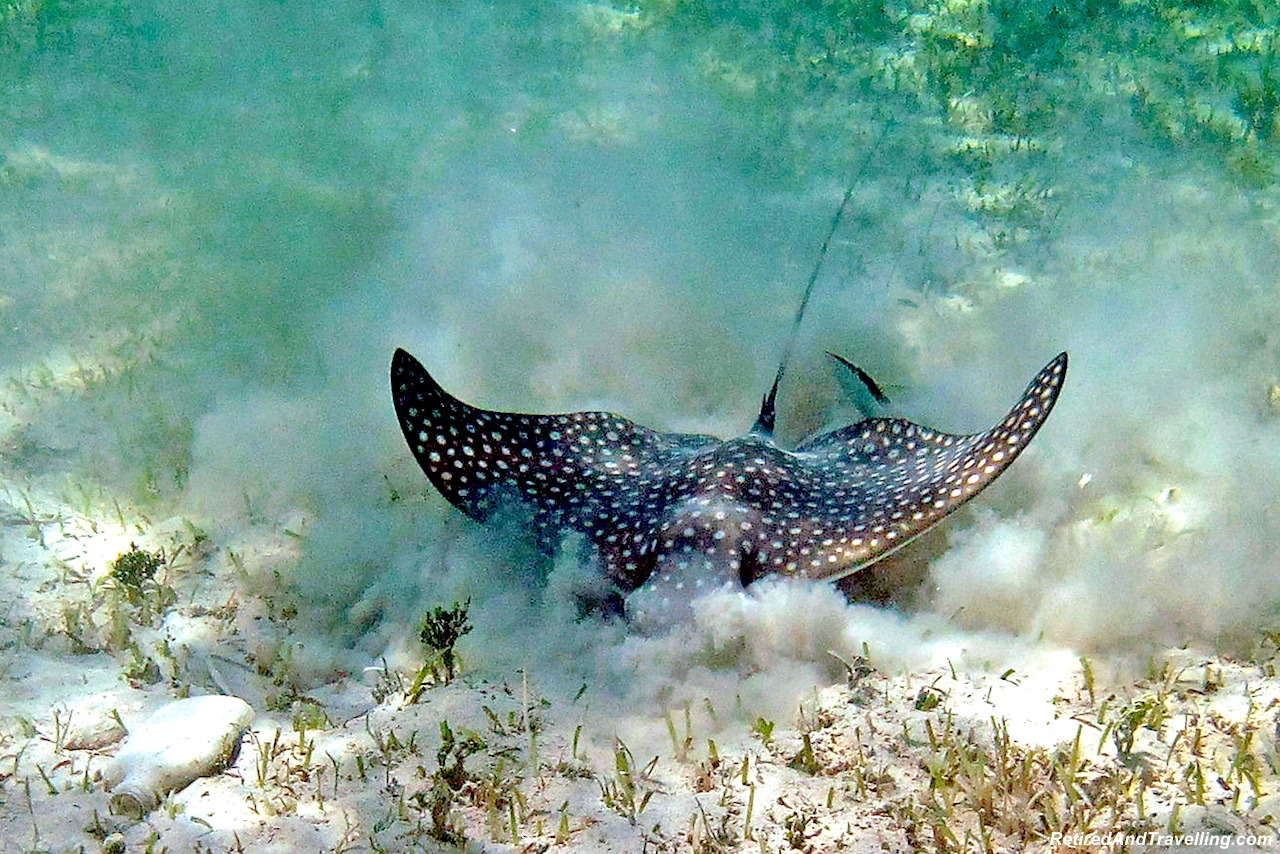 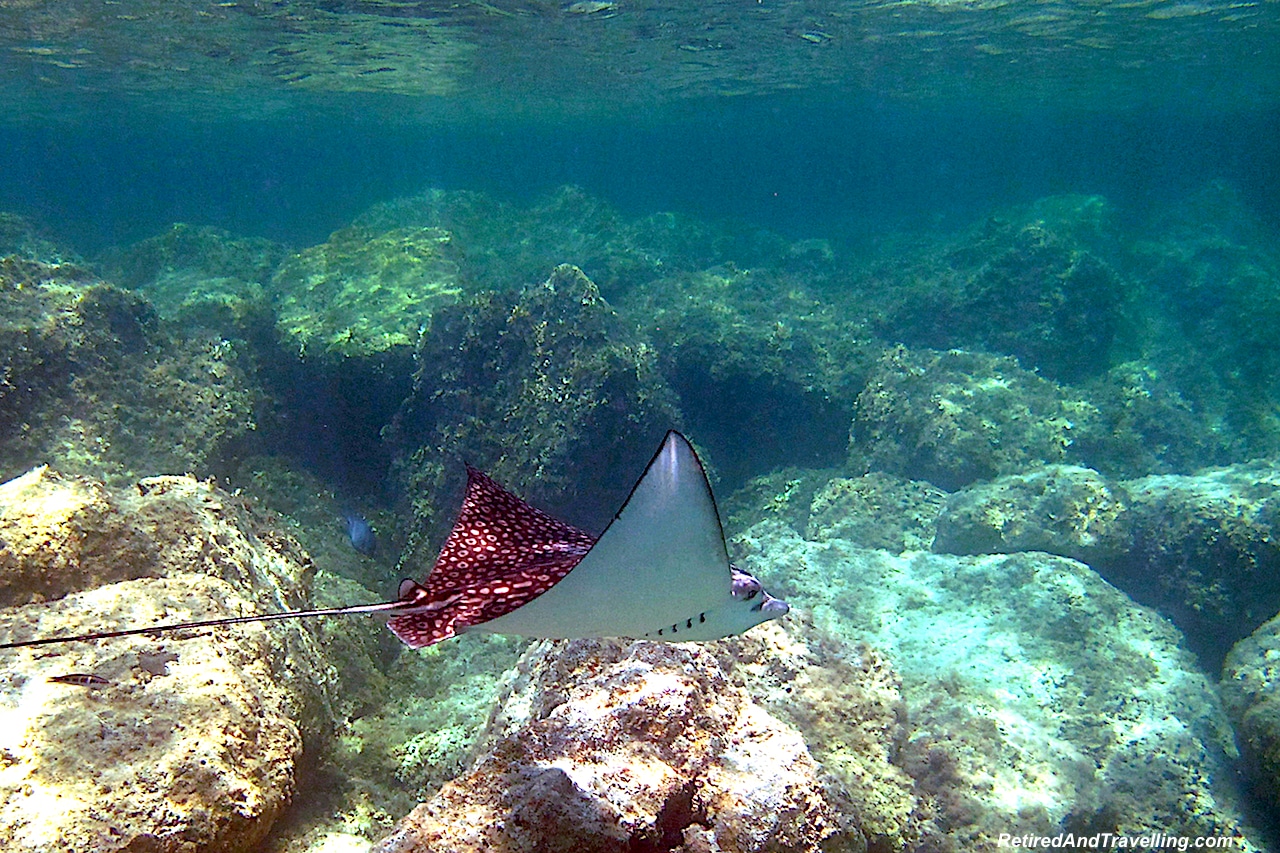 When swimming out by the rocks, I saw a Southern Stingray head my way. I was able to get David’s attention with the underwater camera before it scuttled off. Swimming back towards the beach we paused to watch a Yellow Stingray. 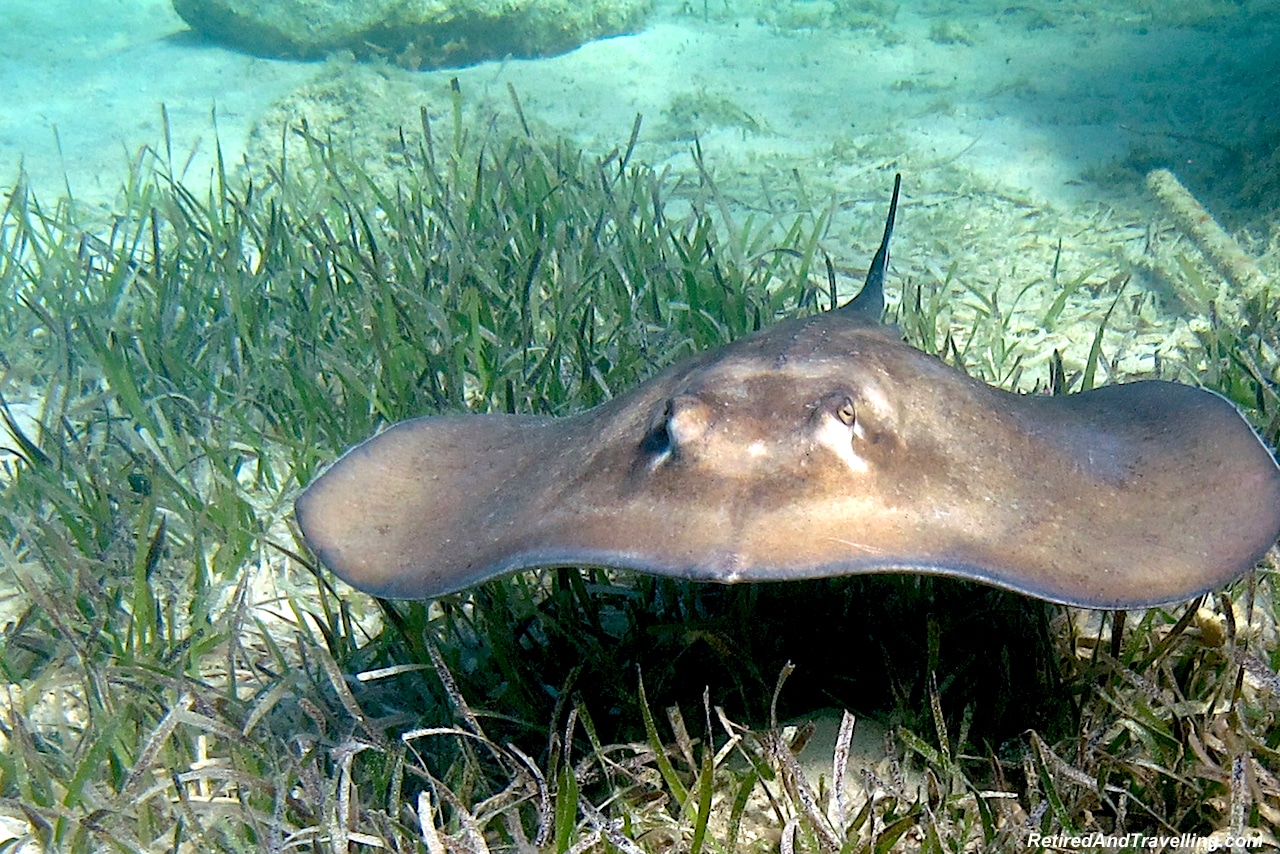 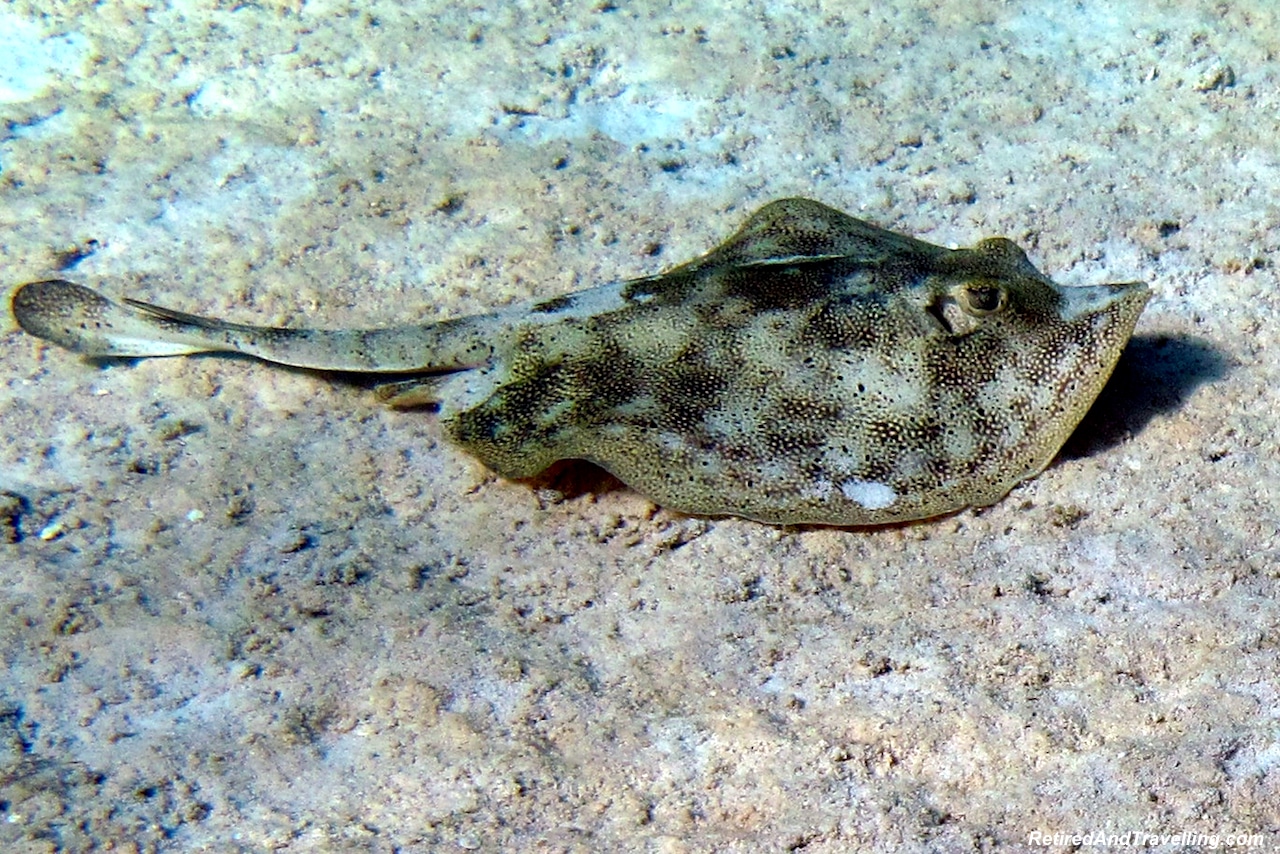 When you snorkel with turtles you may find other exciting things to see!

When we snorkelled in February we found that most of the fish were much smaller in size. But when we reached the rock breakwater we found that either the fish had grown a lot or larger schools of fish had now found this new home. If you snorkelled very slowly you could drift along with schools of fish as they moved in amongst the rocks and out onto the sand and weed sea floor. 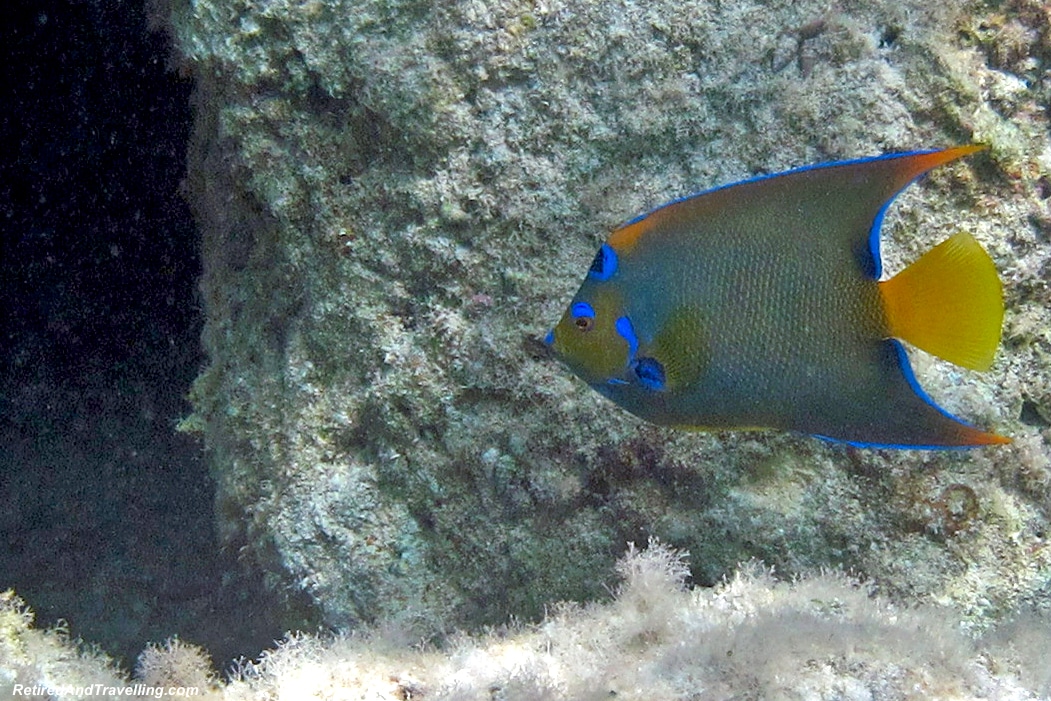 David would often get much closer to the rocks to see the fish that were much warier and kept themselves tucked away. 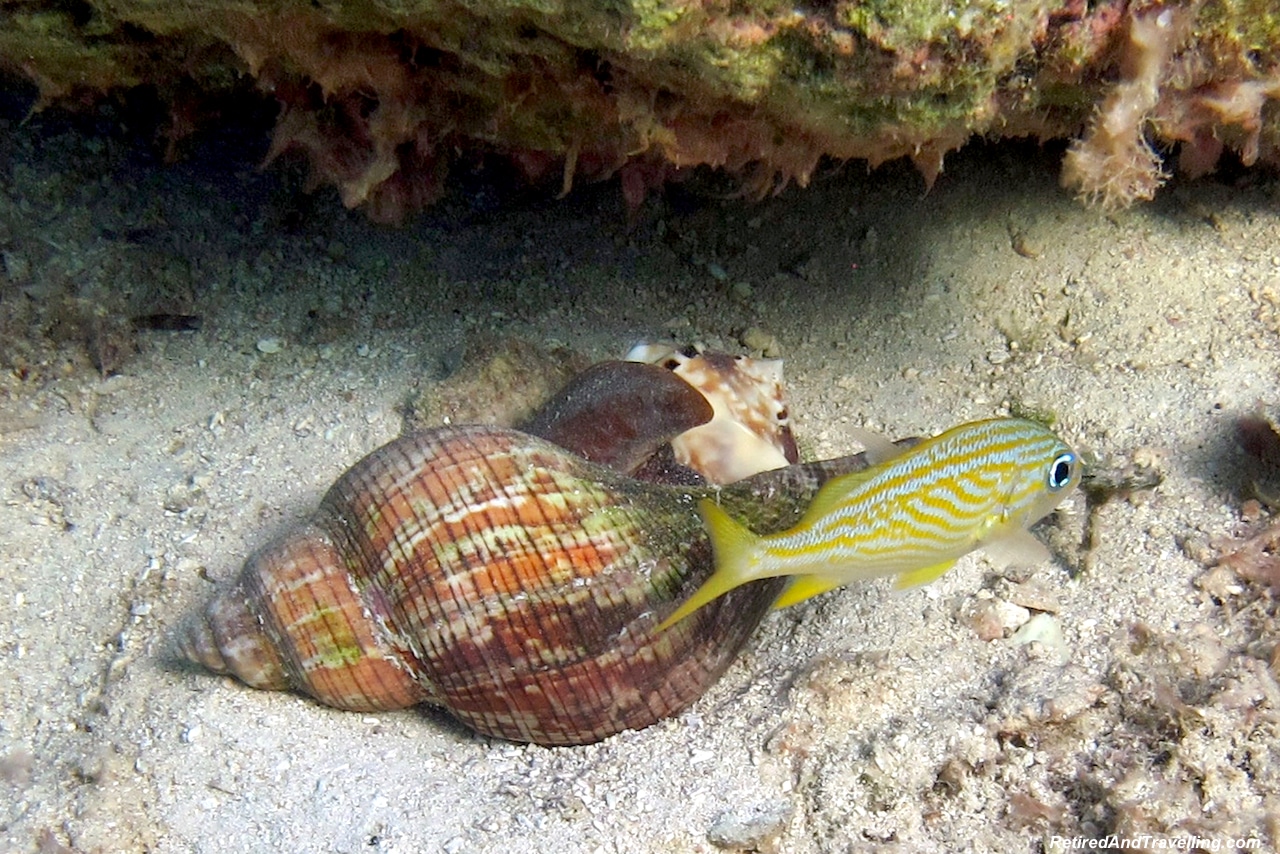 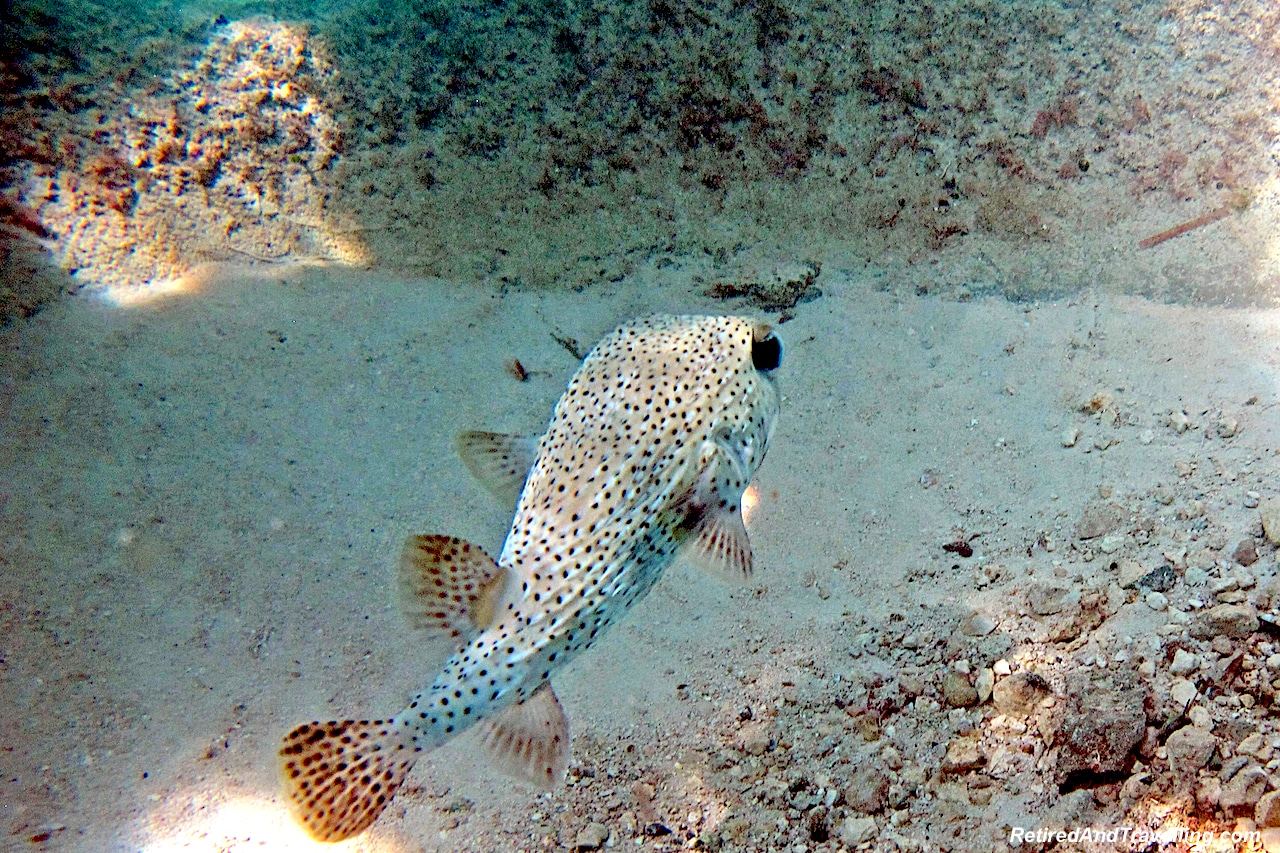 One day we saw a smaller caribbean lobster hiding in the rocks. But the next time we went out we saw a giant lobster who was not at all daunted by David as he set up to take his picture. 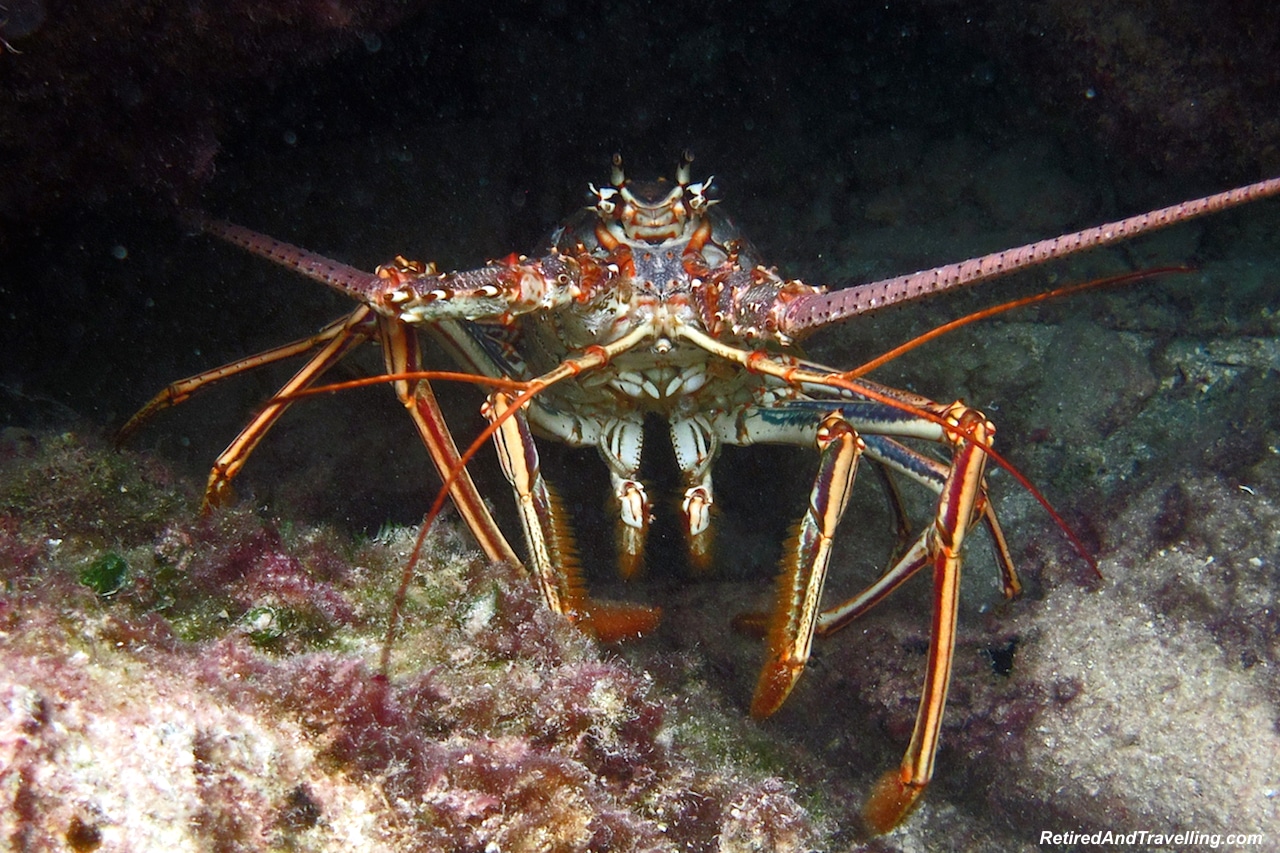 Along the sea bottom you could see Star Fish in a broad palette of colours. 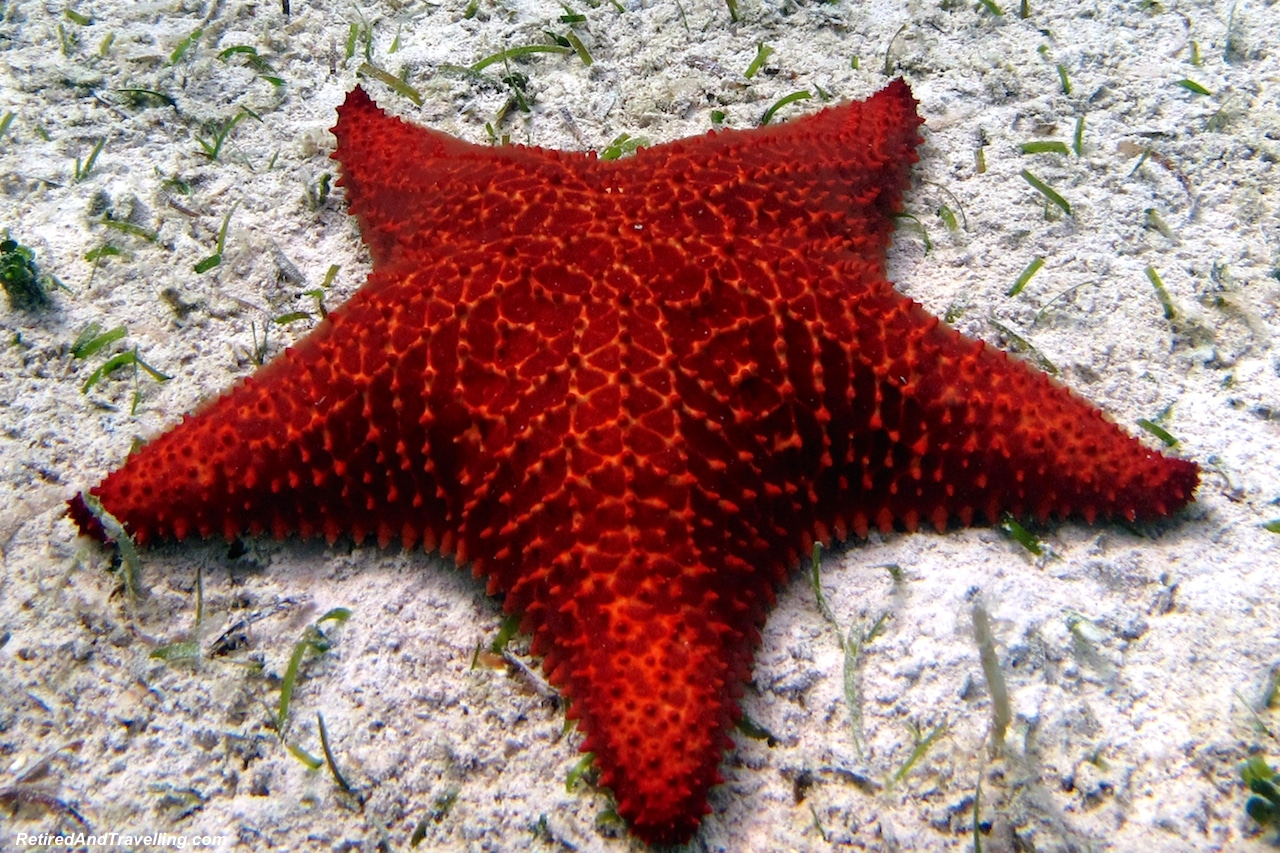 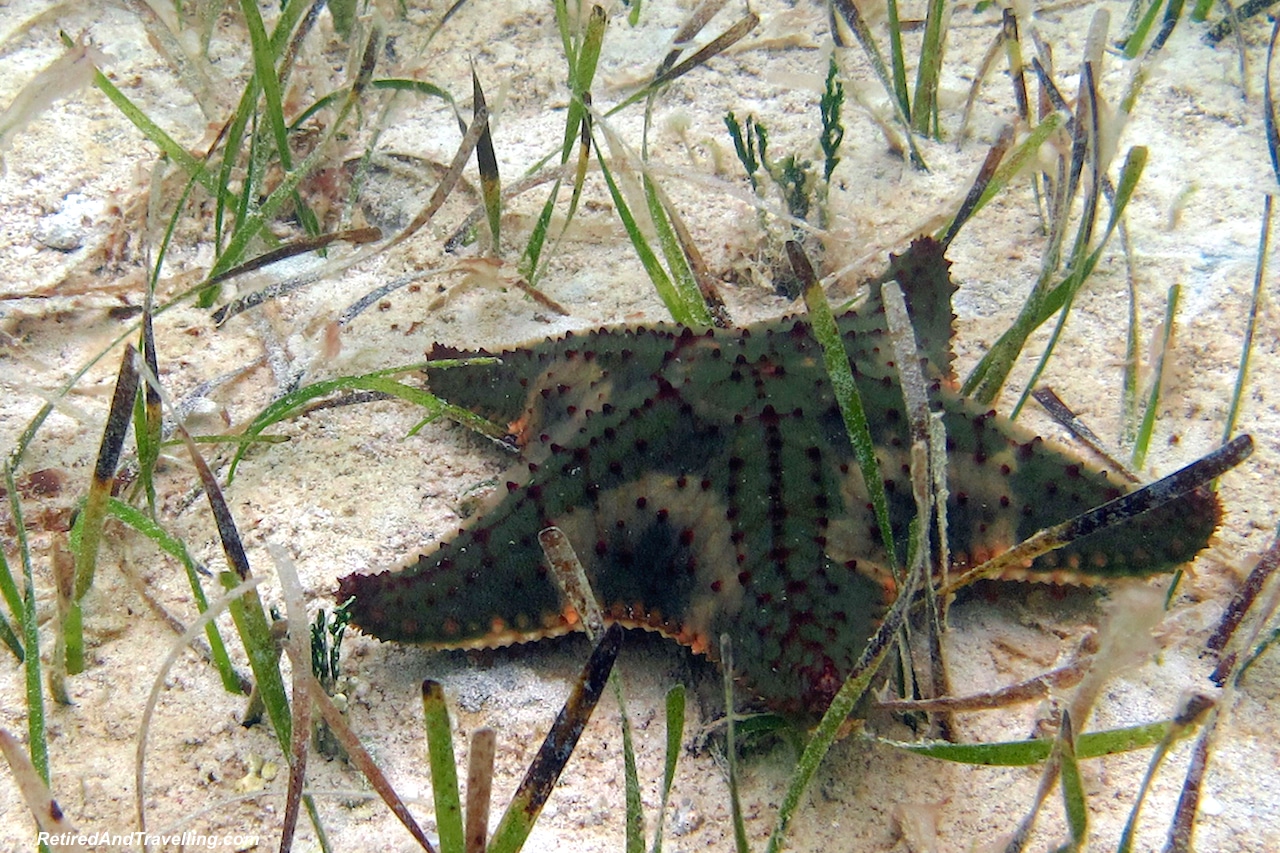 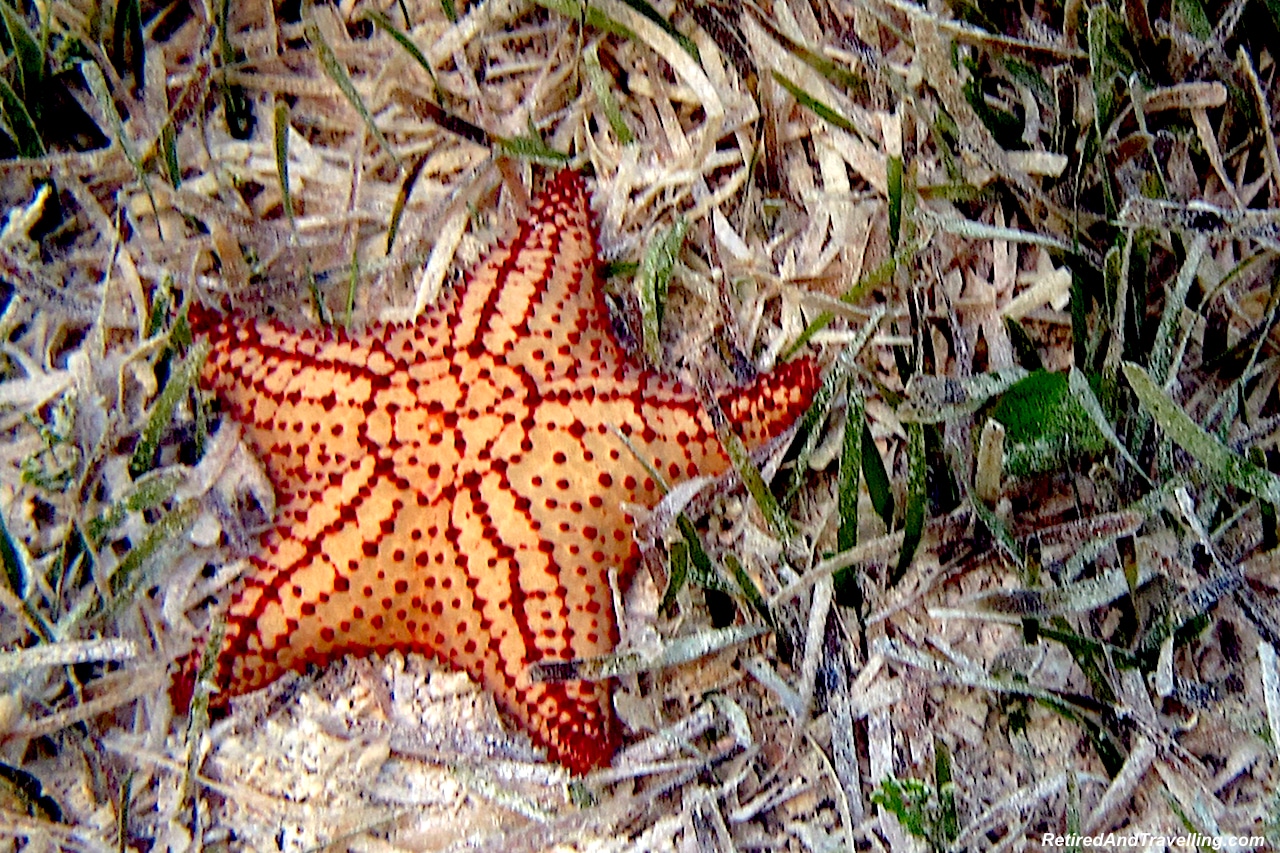 We found that the sea life along the coast and by the rock breakwater to be quite active and plentiful. But we we were disappointed when we returned to the artificial reef being cultivated in front of Baha Mar. 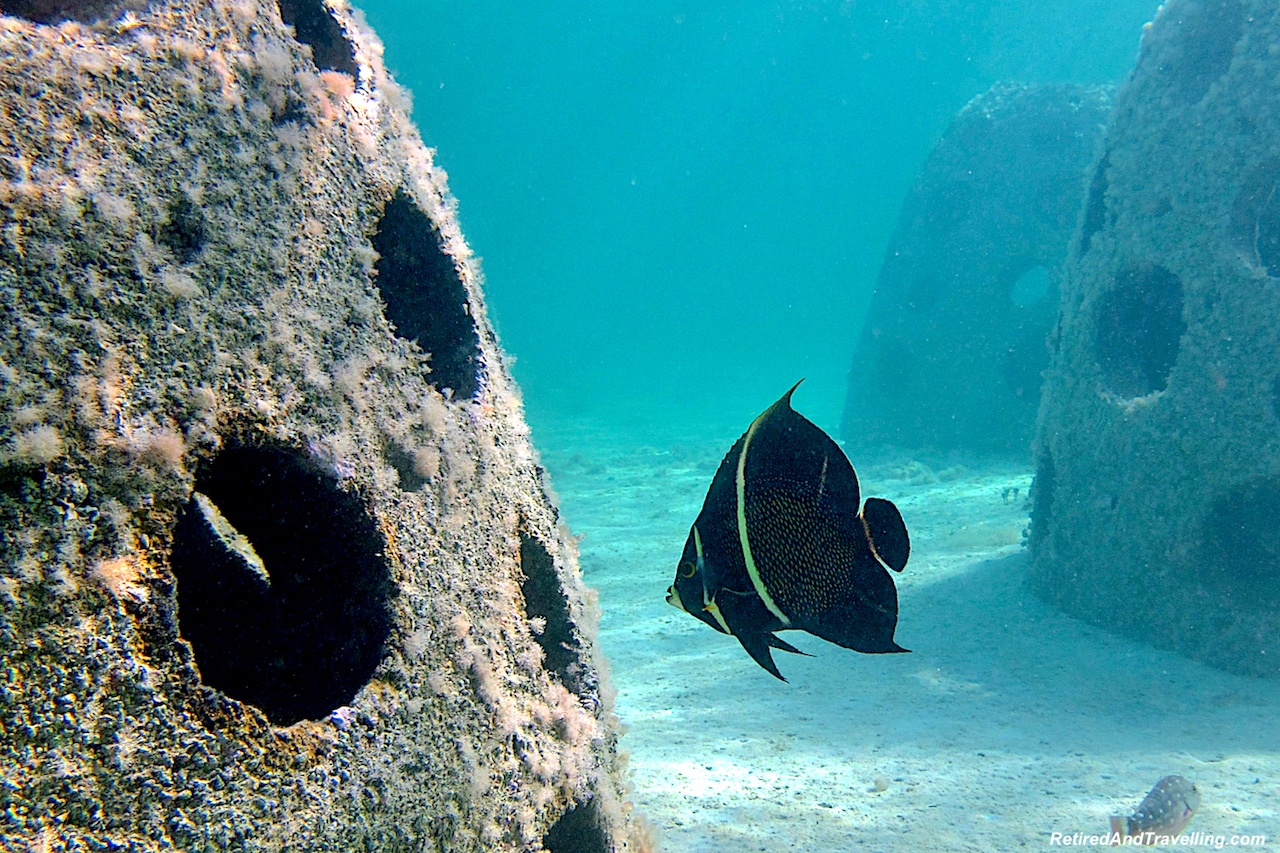 The fish balls and antlers had very little growth on them. There were even fewer, small fish than we had seen on our previous visit. We still remain hopeful that the eco reef will draw even more sea life back to the Cable Beach waters.

Snorkel With Turtles and So Much More

We have done a lot of scuba diving and not seen the sea life that we saw on snorkelling adventures on Cable Beach, Nassau. There have never been this many turtles or rays. Don’t hesitate to head into the water with your snorkel and mask. Swim slowly, stay off the bottom sand to keep the visibility clean and the sea life will come to you! We look forward to our next visit to Bahamas!

Did you snorkel with turtles on Cable Beach? Did you see something we missed? 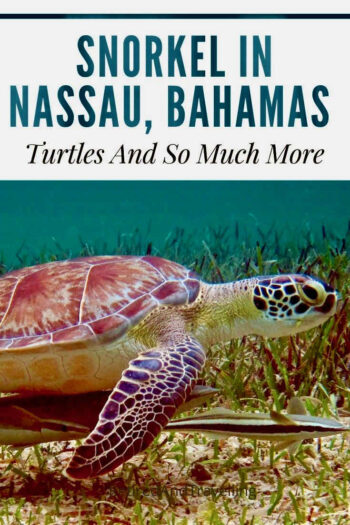 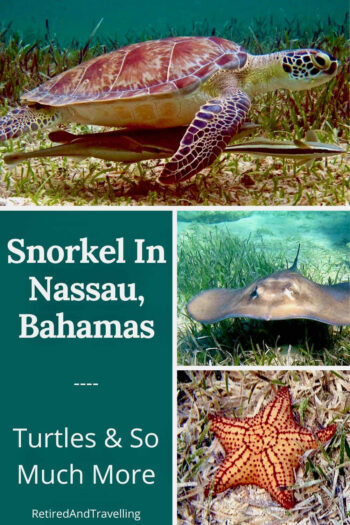