We left Yachats on the Oregon coast to travel the Northern California coast to Napa.

The first night we booked a stop on the northern California coast.  Most queries about where to stop suggested that Eureka was the logical choice.  It was the biggest town we hit on the coast.  And there were options for shopping and dining.

Since we planned to arrive late from the long drive down the coast,  a Comfort Inn would be ok for this one quick stop.  It was located on the far side of town.  So was easy for a very early 7:30 departure to try to get to Napa early.

That was the plan anyway!  But many days on our travels along the west coast ended up much longer than we planned.

The first planned detour was through the Avenue of the Giants to see yet more big redwood trees on the Northern California coast to Napa.  We rejected each opportunity to get back on Hwy 101 until the end.  At each exit, we were sure that around the next bend there would be just a little bigger tree.

Of course, after doing this long redwood detour (almost 90 minutes), we then drove through countless other redwood forests.  Although none with quite as big trees. 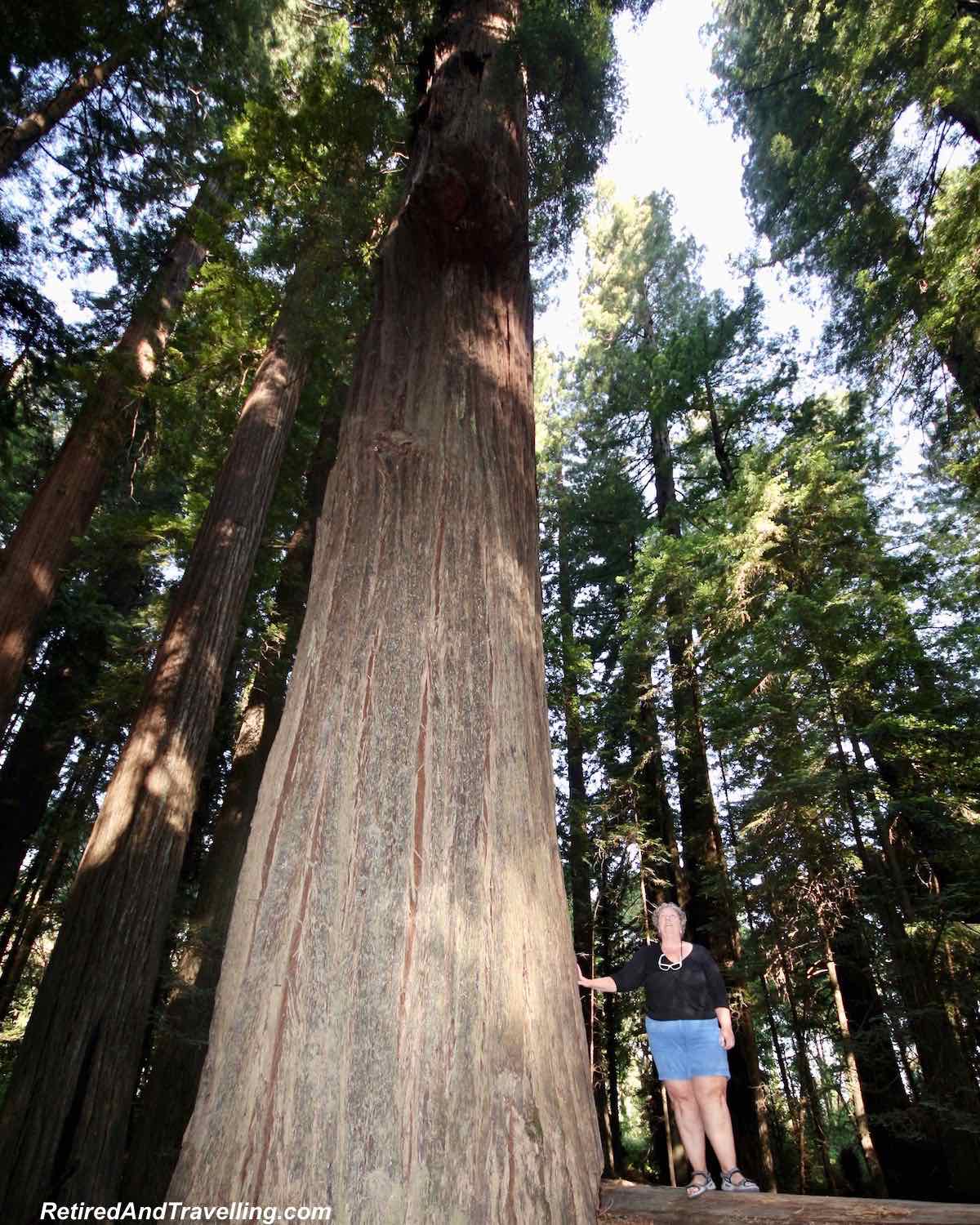 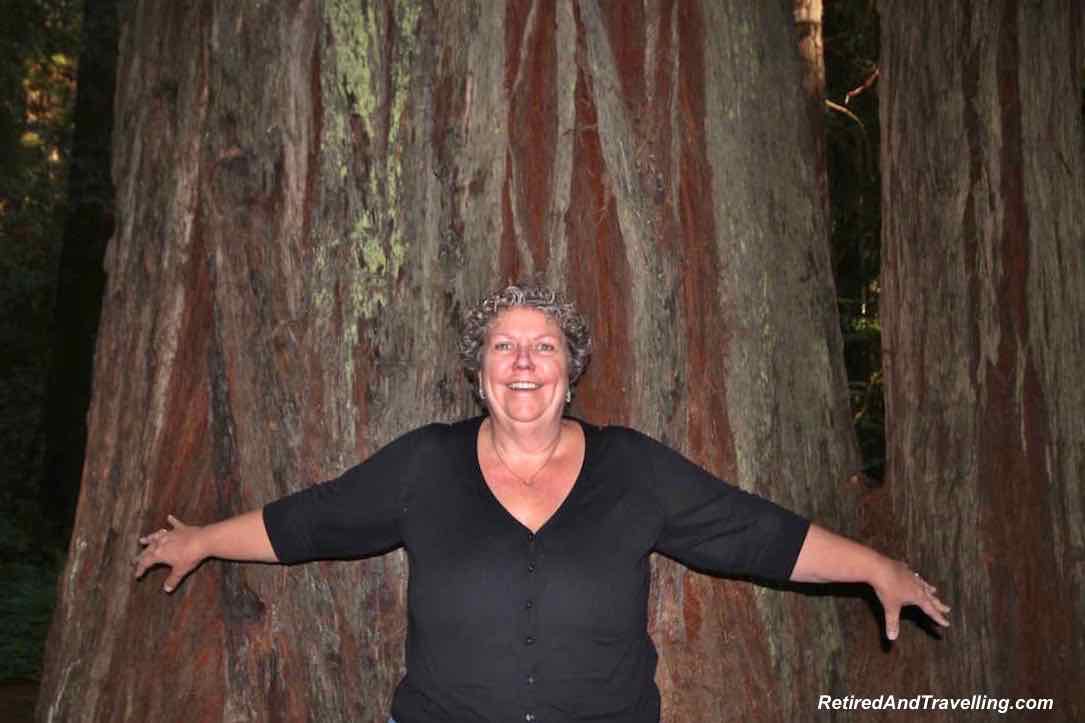 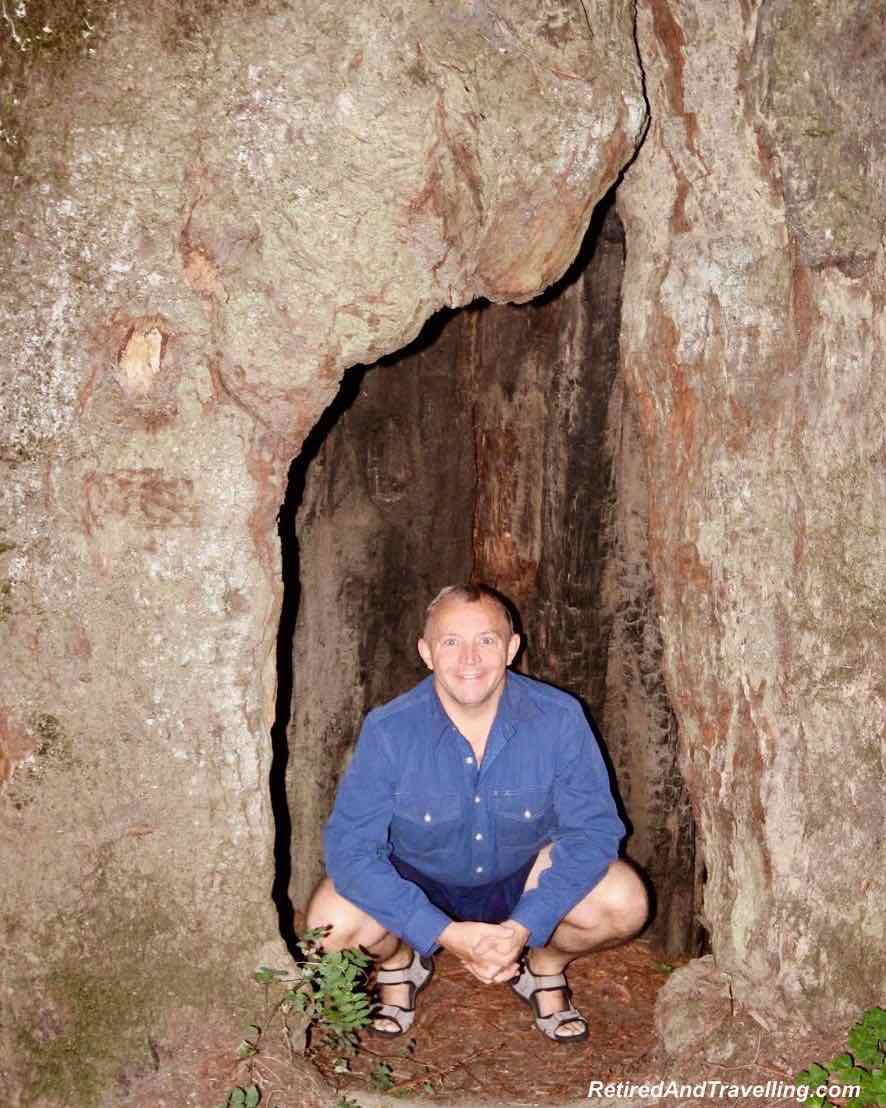 Through The Mountains To The Northern California Coast

We joined Hwy 101 again and made time once again.  I made the mistake of letting David look at the map.  He figured we were still early.  And wouldn’t it be nice to head over to Hwy 1 on the coast.

Route 208 on the map looked quite short.  But we were sure with all the twisty turns that we traveled 3 to 4 times the “as the crow flies” distance.  It was a wild roller coaster ride through forest and up and down mountains.  The speed limit posted was 55 in most places.  But it was really “55 if you dare”.  The switchbacks had slower speed postings but even those suggested speeds were too high.

We figure we averaged 30 mph through this route.  The same proved true when we were on the coast after we left our stay in Carmel and Monterey.  If you do the coast road or cross the mountains, plan for much more time!! 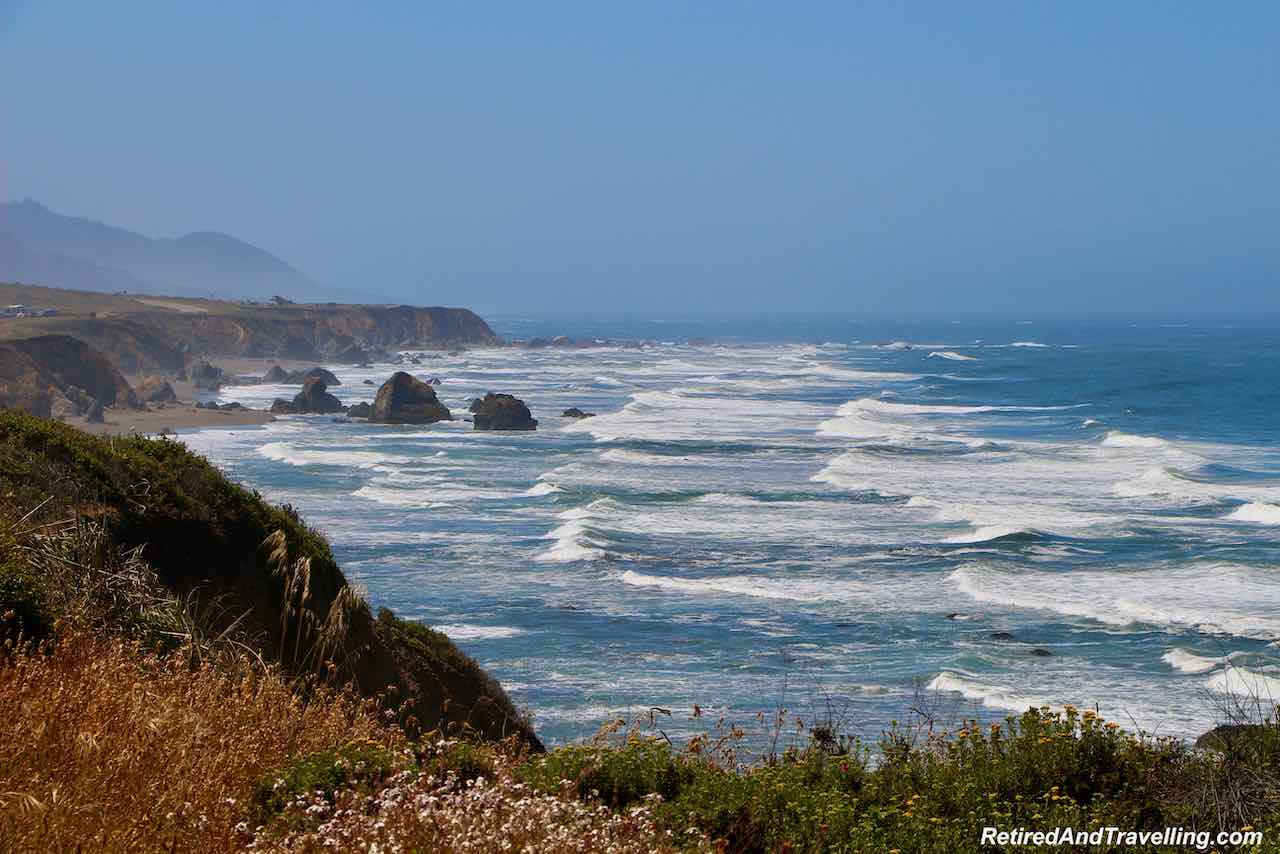 Emerging unscathed around Fort Bragg we travelled for a short while on the coast before it was time again to head inland for Napa.

Hwy 128 seemed the logical route to get from the Northern California coast to Napa.  But the first part went through yet another redwood forest and mountains.  Our arms got a good workout.  We only wished we had a small sports car to really enjoy the drive.

When we got to the valley, it was clear that we had entered wine country.  Terraced grape arbours lined the road.  They went up into the hills as far as you could see.  When we stopped, we were hit by a wall of very hot air.  What a difference being off the coast made!

At Hwy 101, we joined Hwy 29 and drove through first the Sonoma valley.  And then into the Napa Valley, hitting first St Helena and then Napa.  It was a great drive through the wine country.  We would have missed it we took a more direct route.  Of course, it meant that we did not hit the Napa Inn until dinner time again!

A Weekend In Napa

The suggestions we got from the host at the Napa Inn were good.  We got great recommendations for dinner.  And an awesome recommendation to use Platypus Tours for a smaller wine tour on our second day.

With 4 wineries under our belt from the wine tour, we stopped in one final one (Artesia) on our way out of town.  This one was recommended by other Napa Inn guests for the great views (since it was up on a hill, quite remote from town).

After our weekend in Napa, we set the GPS for San Francisco .  We made corrections to the route to make sure we crossed the Golden Gate Bridge.  And off we headed for our next stop.

If I didn’t say it yet – get a good portable GPS (we use a Magellan one) to take when you travel.  The one we bought had Canada and US maps.  But also major countries in Europe.  Even if we did not drive, we used it to help us navigate when we walked and didn’t have cell service to use our phone map apps.

Comfort Inn (Eureka)
This was a basic hotel with an ok room.  The one treat it did have was a hot tub for the sore butts that came from a very long, tense drive.  Breakfast was included and did include some protein (and no hard boiled eggs).
Napa Inn (Napa)

The Napa Inn host was great with good customer service skills.  They had some great suggestions for both places to eat and things to do. 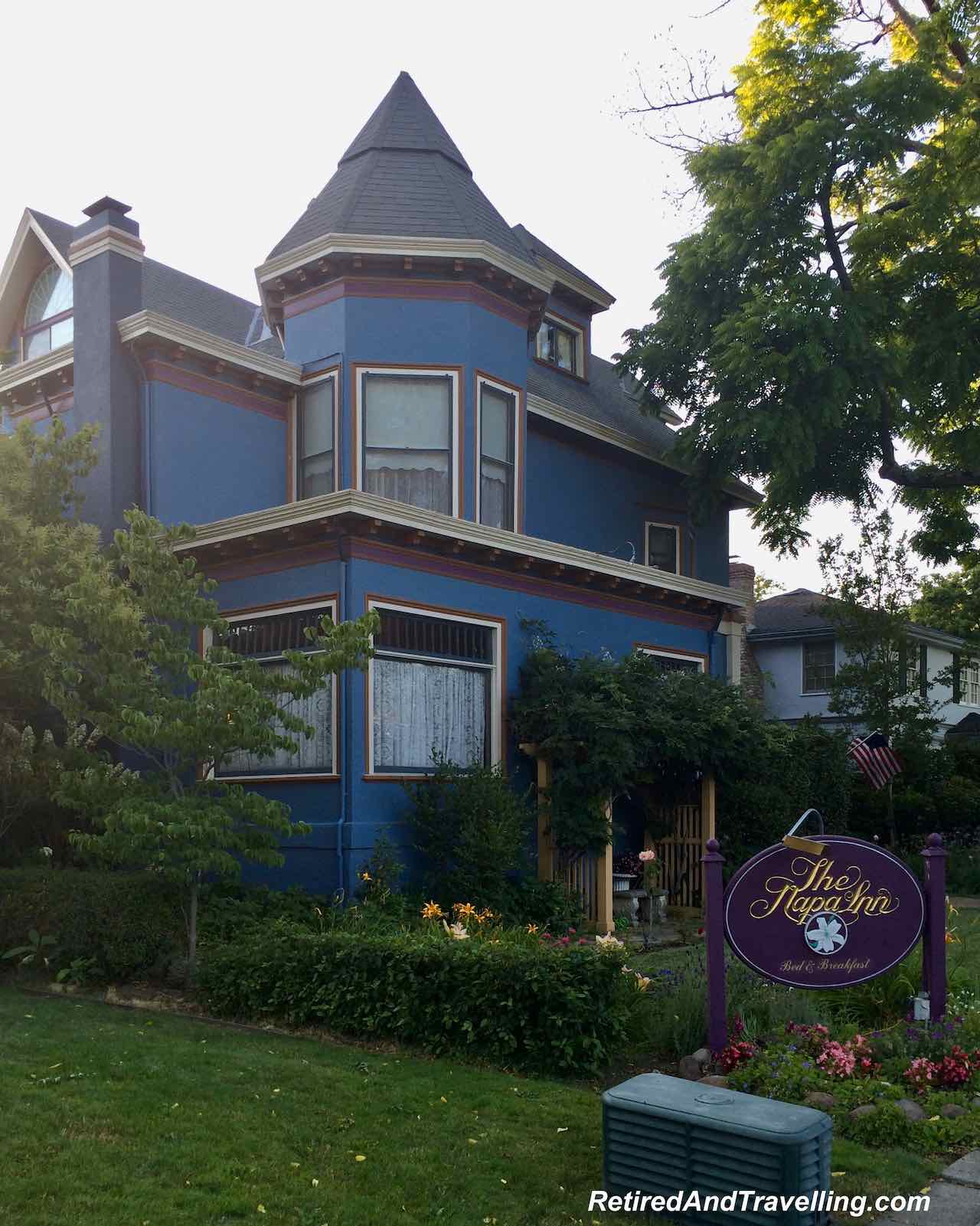 We had selected a bit larger room.  So it had lots of space for us. The bed was very good. But the pillows again were not.  It was a good thing we brought out own pillows.

The common area was also large and a good place to read or use iPads.  It was  especially good when it was time for wine or cookies.  Breakfast was good – with fruit to start before a hot entree.

It was an easy walk into town and there were even places within stumbling distance after the wine tour.

Things To Do in Napa

Recommended by the Napa Inn, Platypus Tours was a great choice for a small group tour.  There were only 12 people on our little bus.  The hostess Greta was a great guide.  She took us to some of her favourite family owned wineries.  And even served lunch at one of the winery stops.  The grape vines had started to bloom with little green grapes nestled under the leaves. 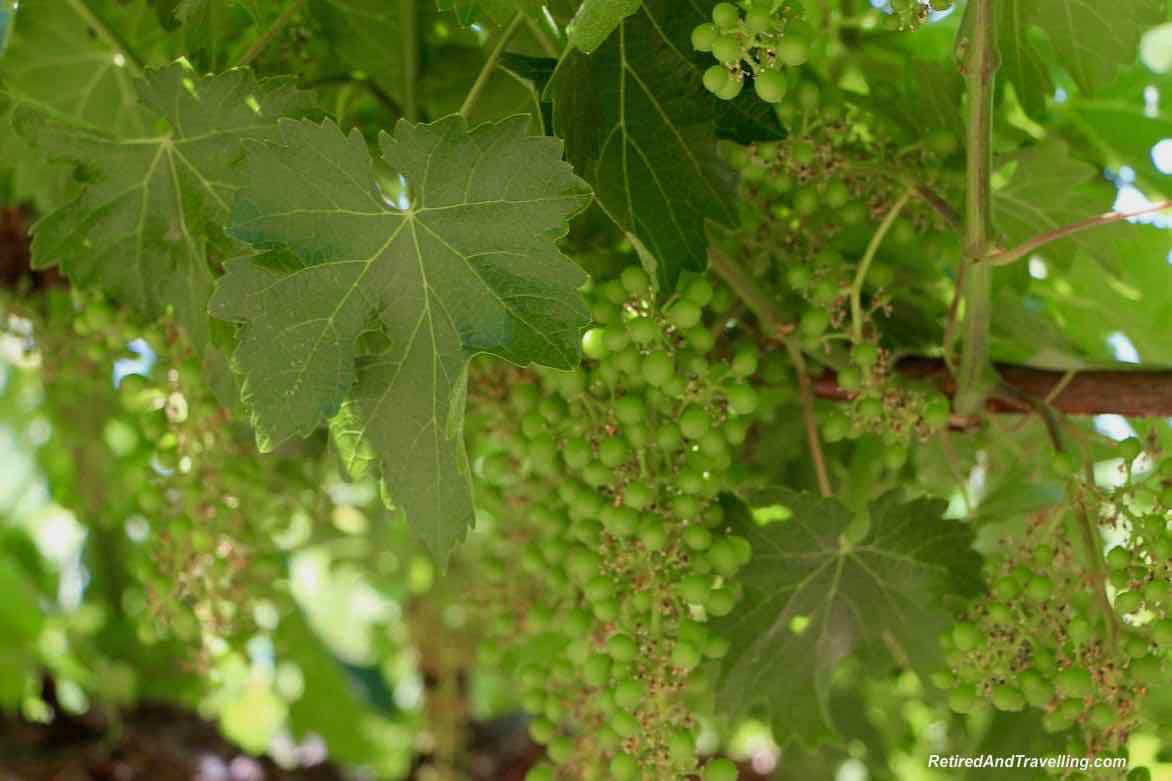 The first stop at Hopper Creek introduced us to Darren.  He provided us with a great wine tasting education and entertainment too.  We all tried to apply his knowledge as we moved through the other wineries.  But forgot too much as the wine flowed. 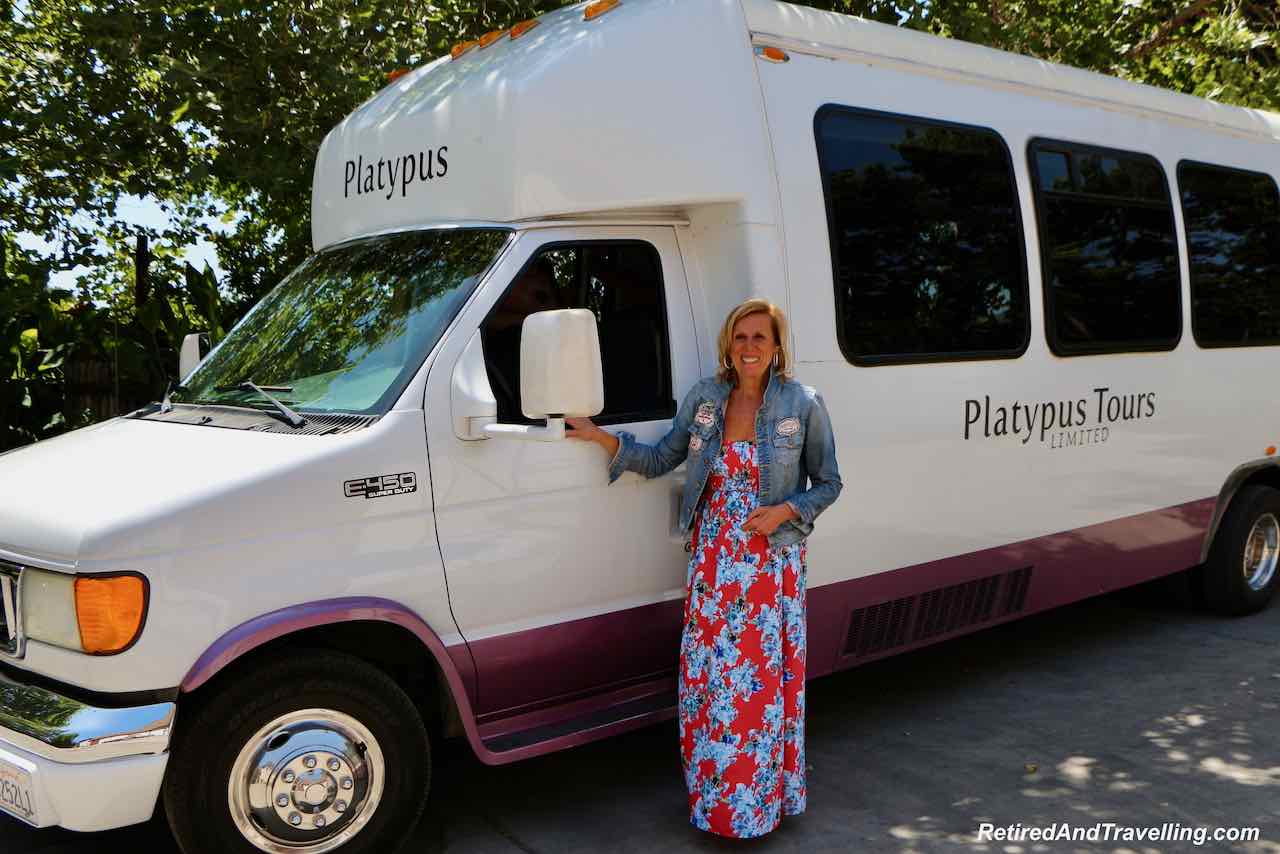 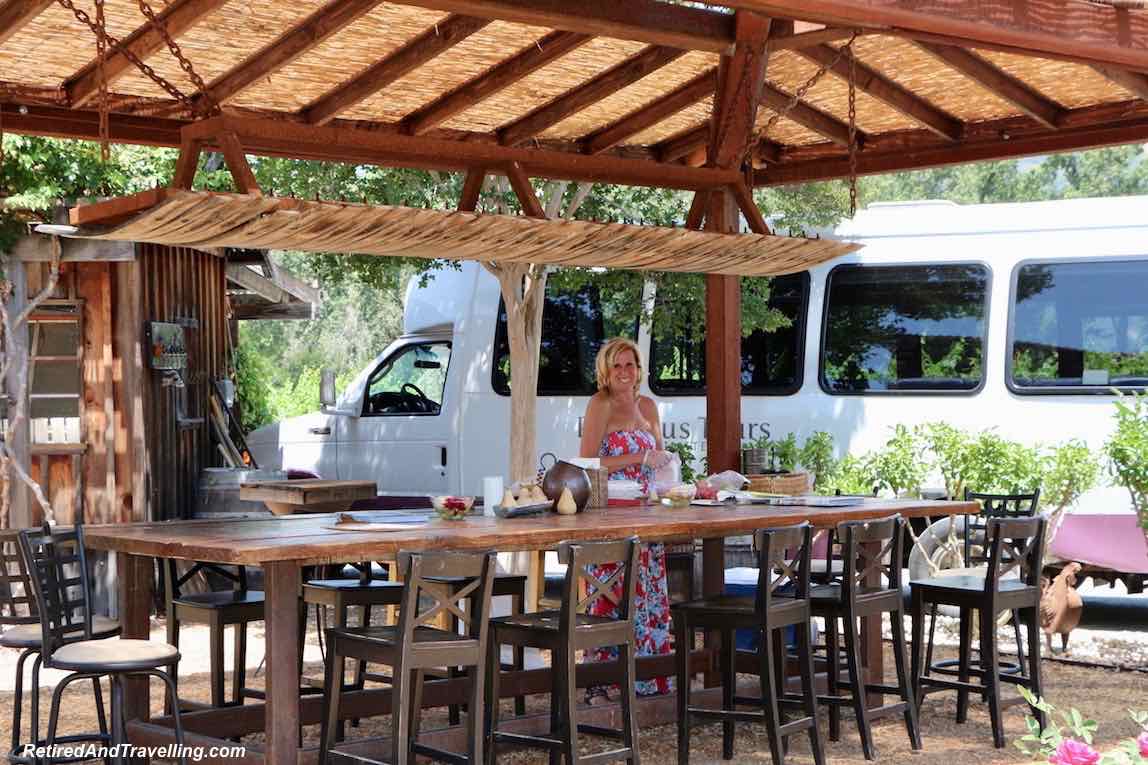 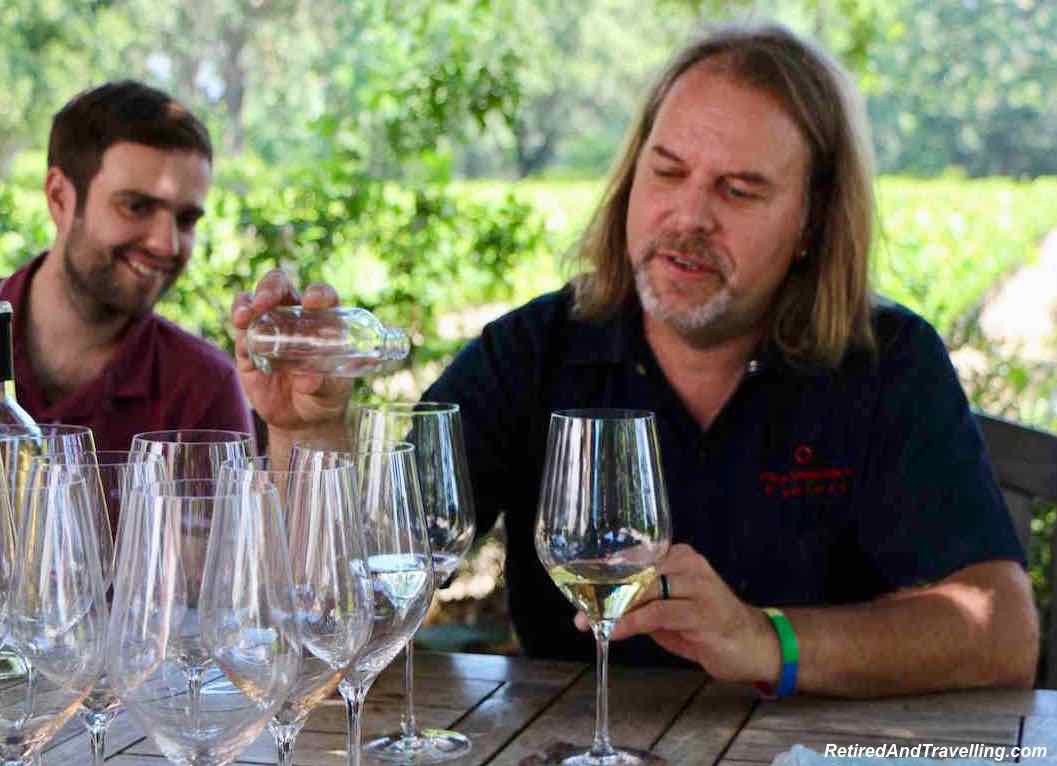 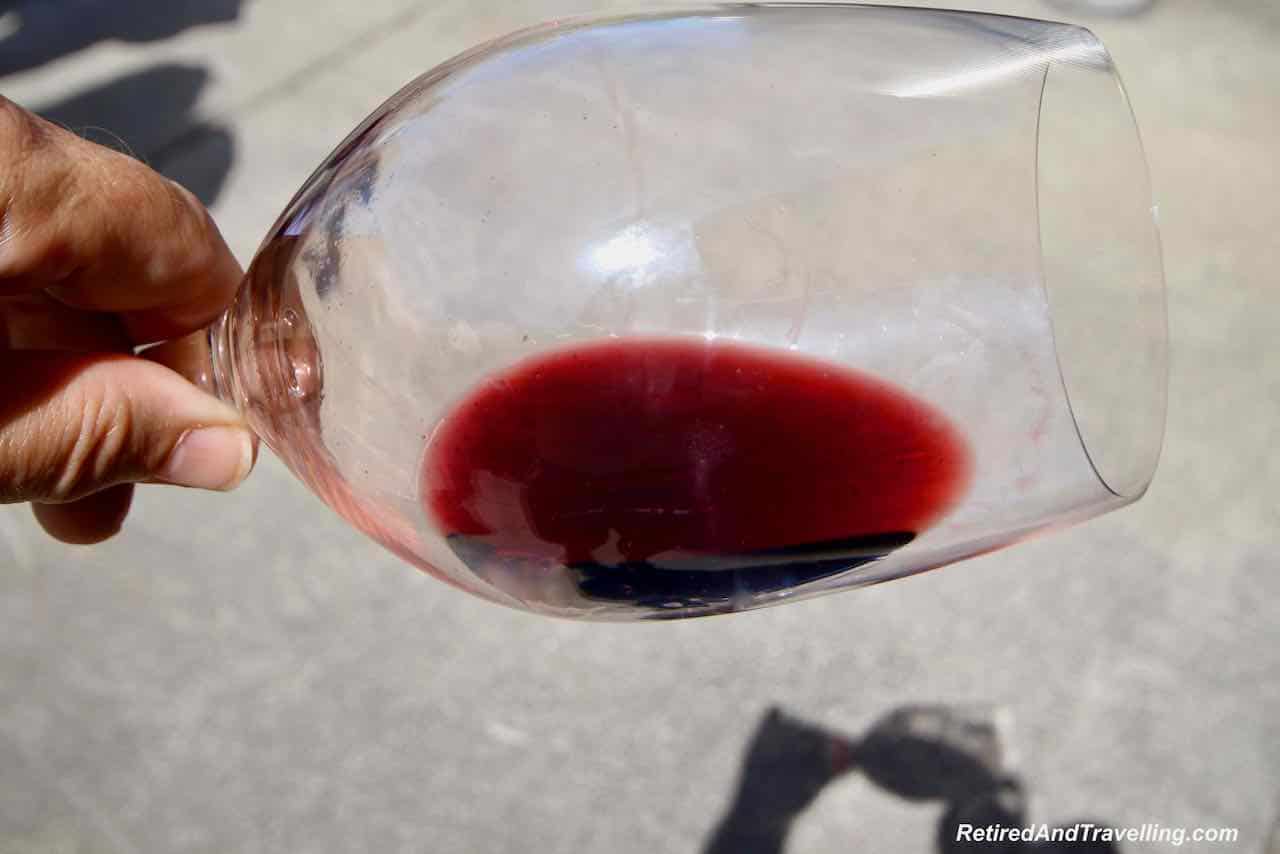 The second stop at Tudal Winery gave us a chance to see the fields and wine processing.  And sample some more wines. 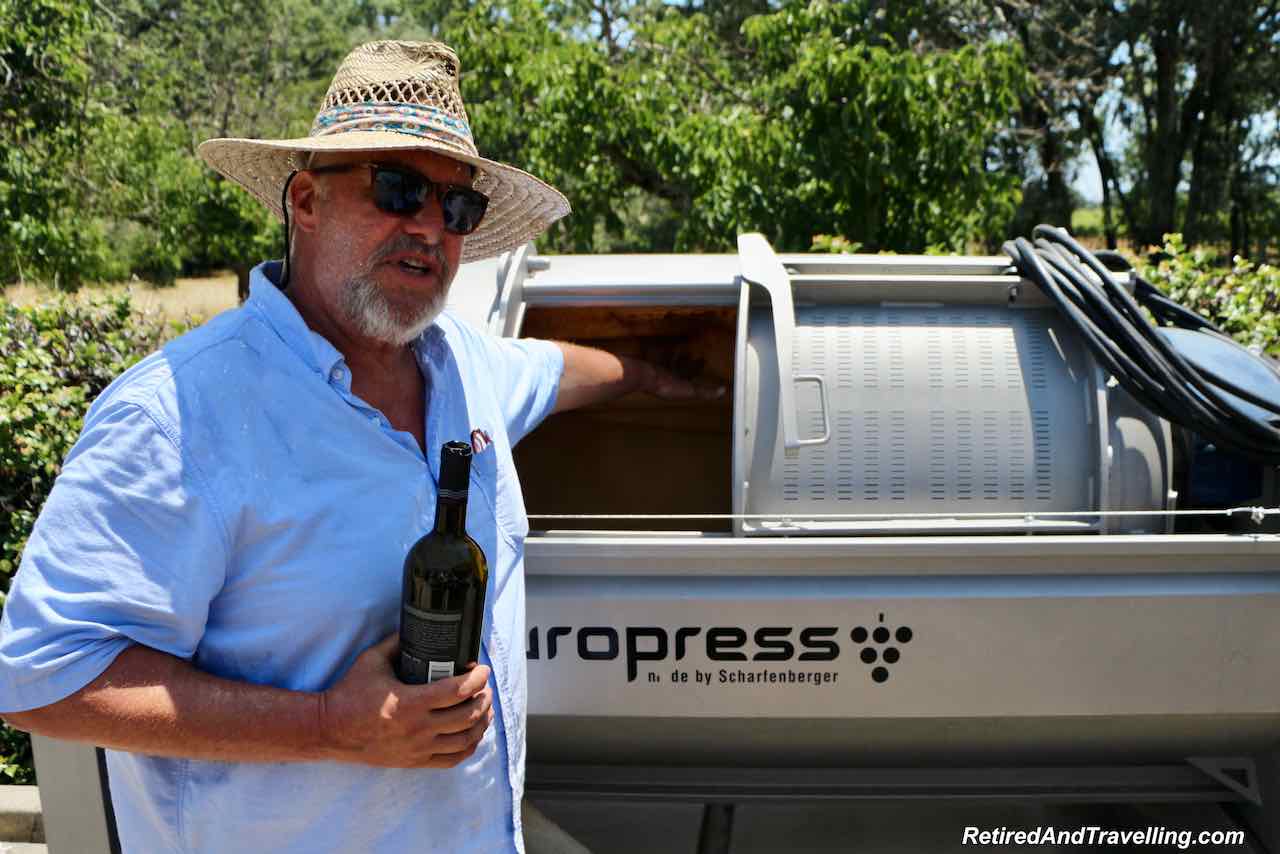 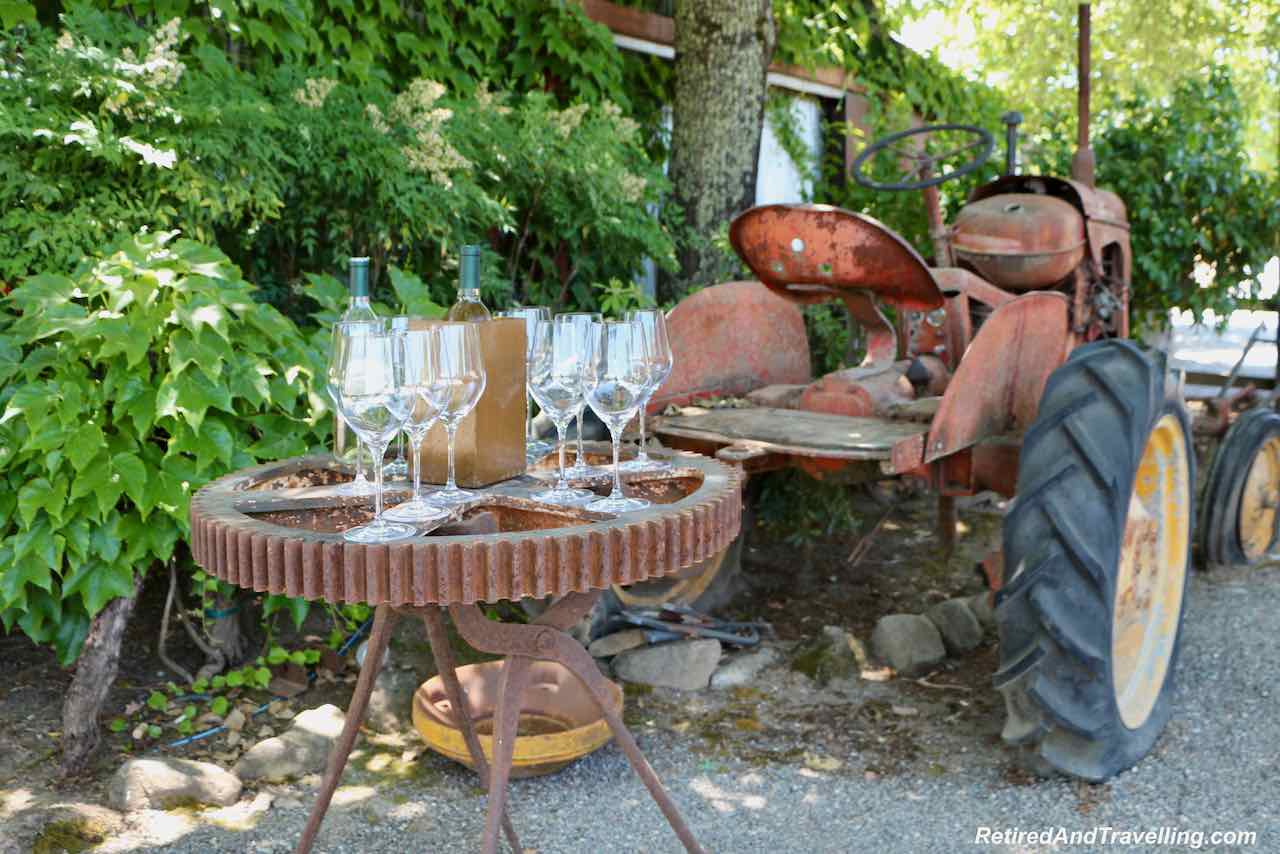 The 4 wineries offered a wide variety of wine with generous pours and discounted tasting fees.  We bought 4 bottles of wine.  One very expensive one was a gift for my best friend.

The Artesia Winery was recommended to us by another guest at the Napa Inn for the views.  Located outside of town, we followed the GPS to this not very well marked winery.  We were surprised to see how many people had found it.  But then there was a chocolate pairing scheduled that morning.  We didn’t try any wine (since we were driving).  But we wandered around the site and took in the great views from all sides. 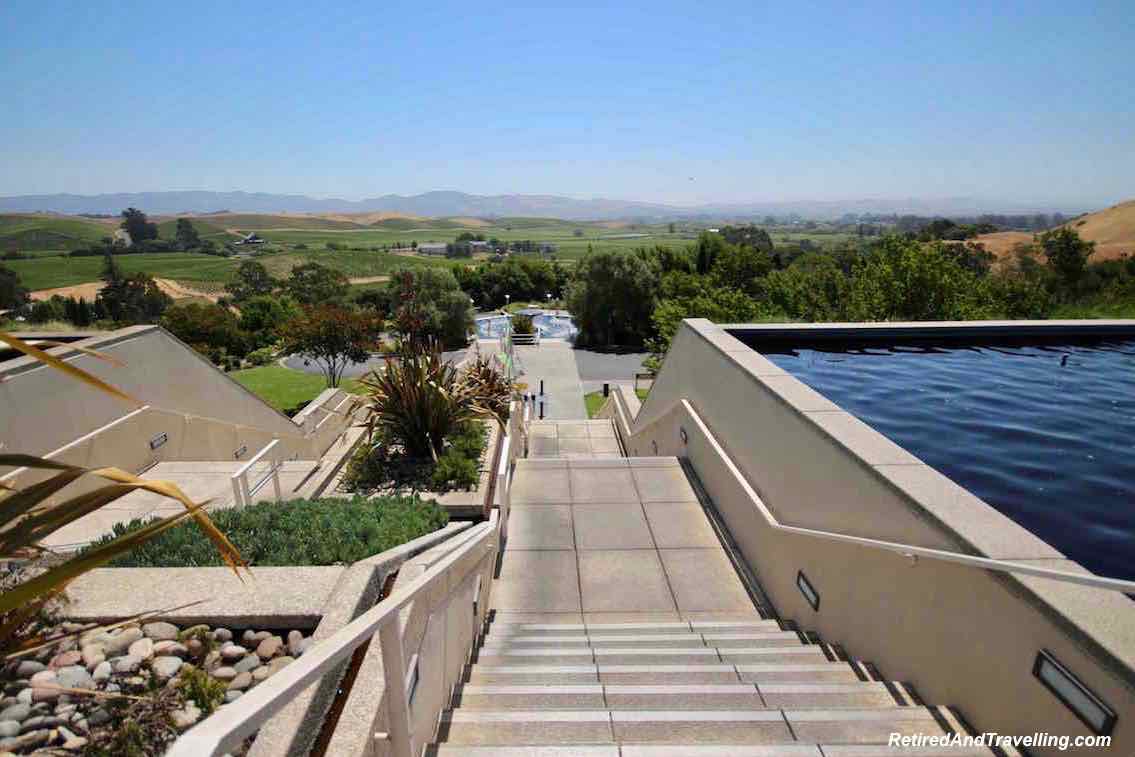 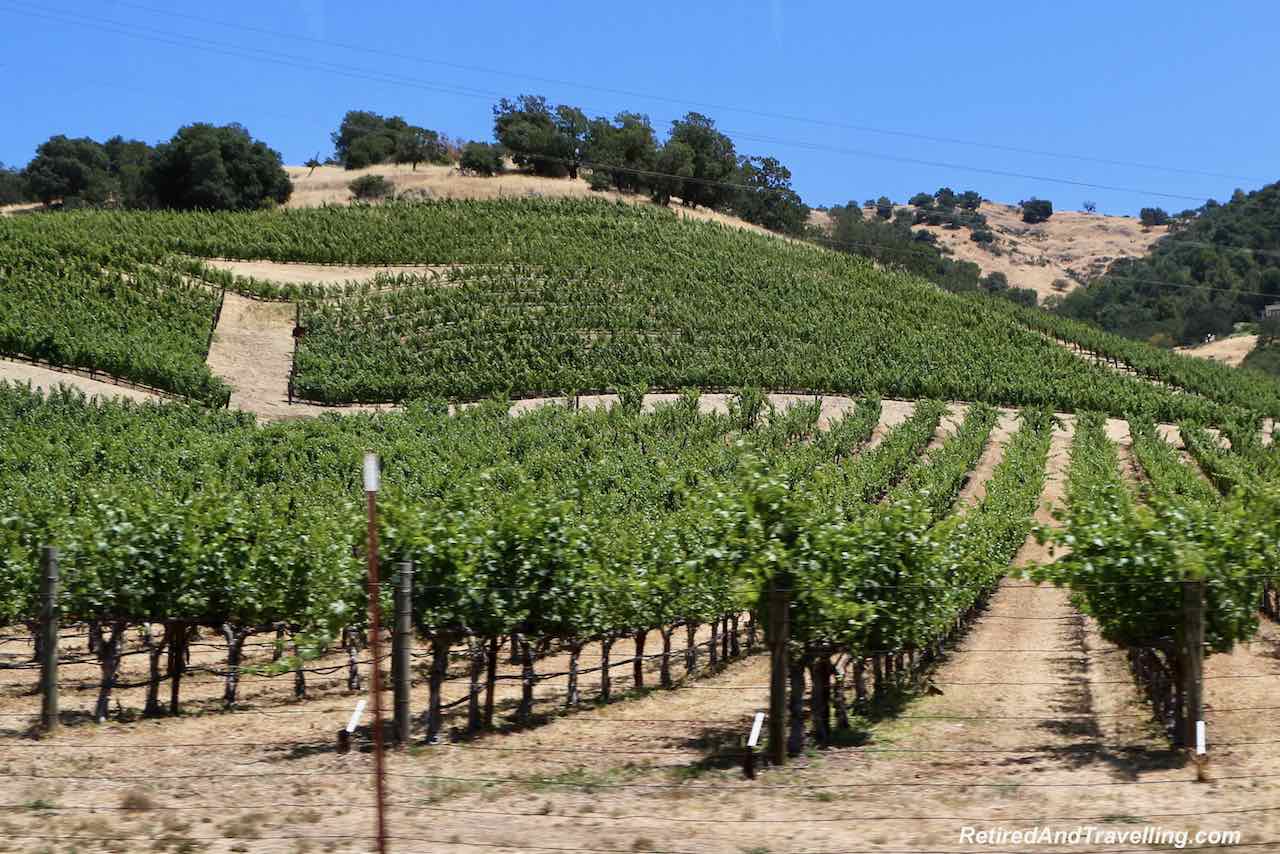 Places To Eat In Northern California

Marie Callender’s (Eureka)
A chain restaurant attached to one of the chain hotels was ok when we looked for a quick dinner.  The big surprise was the amazing home baked pie (which they were apparently famous for).  They offered full pies to take home.  And while tempted, the calorie count for each slice was a major deterrent.

We stumbled in after our wine tour. Both of us were very hungry and we needed to soak up the wine left in our system.  We both ordered entrees but the burgers were so big we barely made it thru half before we slowed right down.  Our thoughts of dessert disappeared.

A Great Trip Along The Northern California Coast To Napa

We headed south along the California coast and spent some time on the northern rugged coast.  Coastal views and giant redwood forests were great attractions.  We really could have spent more time.

It was a great drive from the coast through wine country to our stay in Napa.  We enjoyed our stay and our tour with Platypus Tours.  But we really only got a small taste of Napa.  Napa was a place we returned to many times.

From Napa we headed south to stay in San Francisco.

Have you travelled along the Northern California coast to Napa?  Where did you stop along the way? 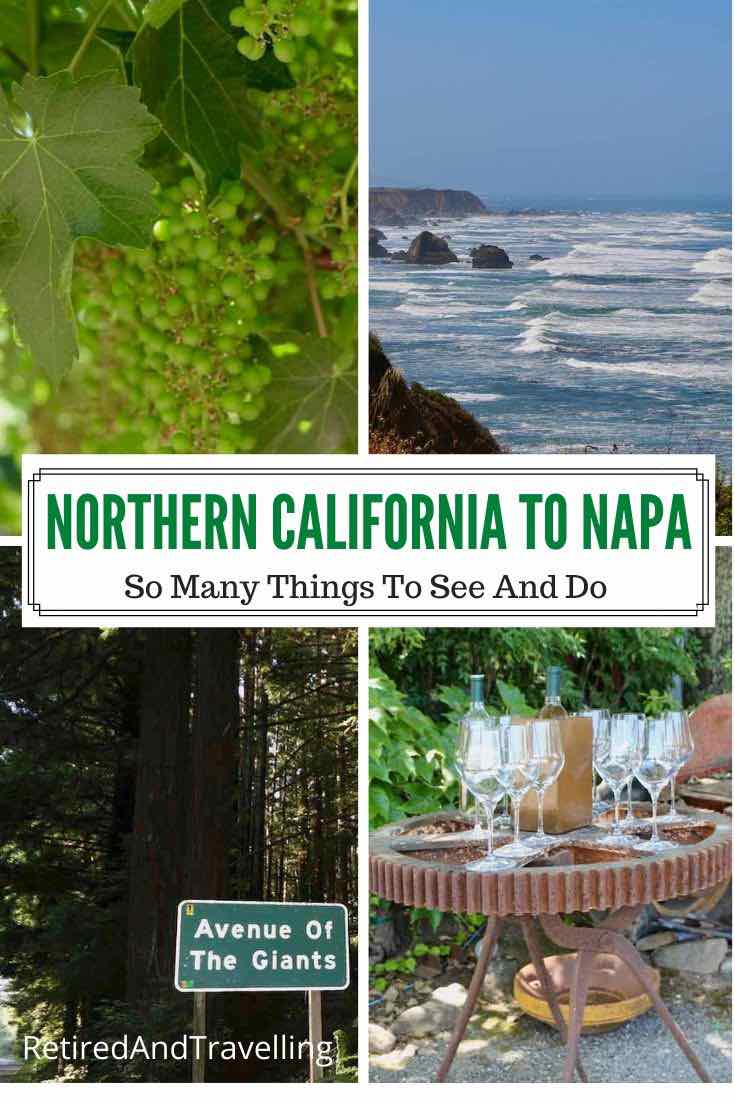 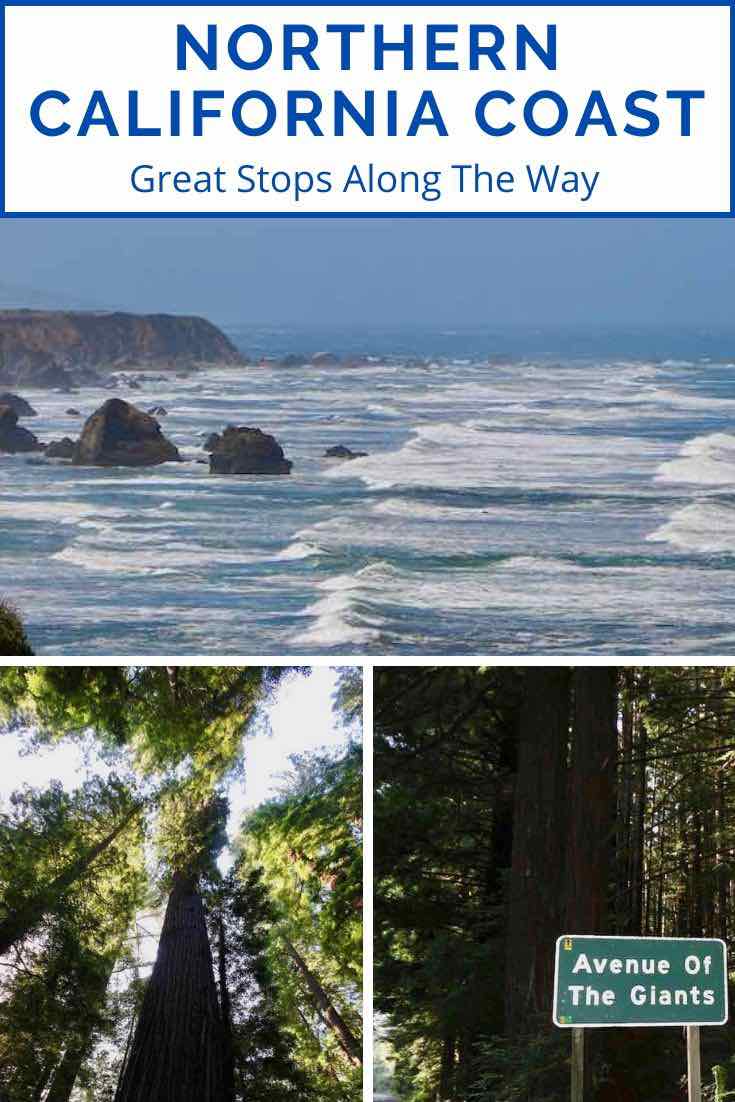 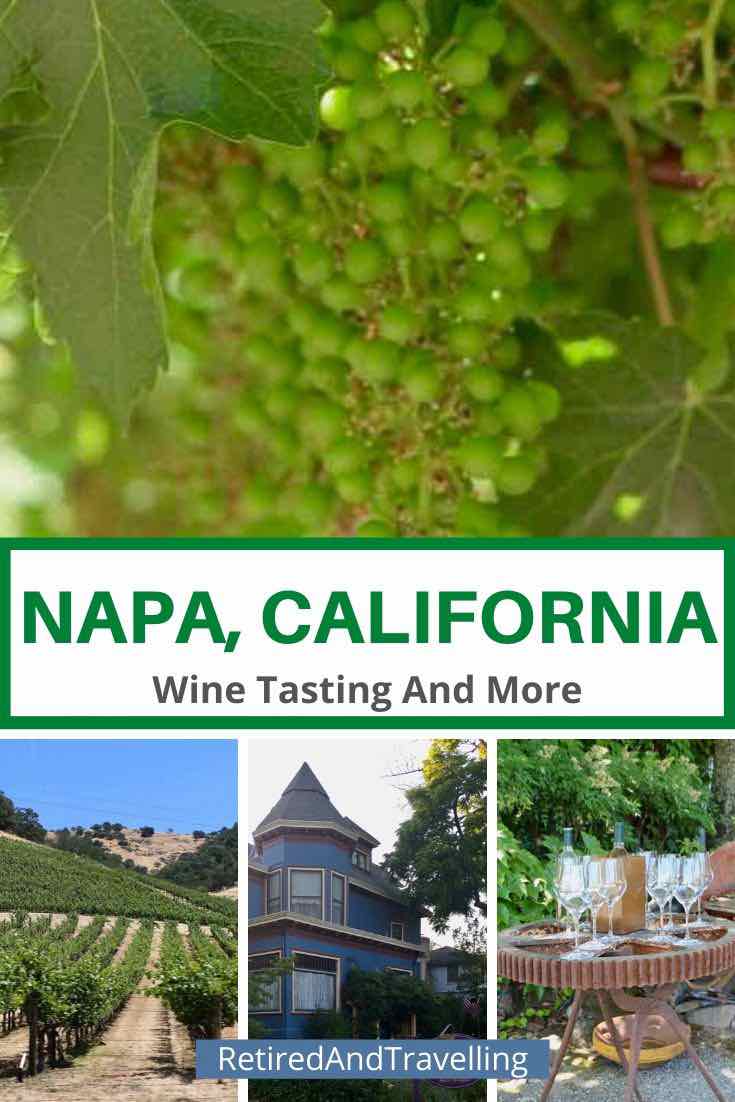 We would love if you could share this!
27
27
Shares

A Rainforest Excursion in Ketchikan, Alaska

Enjoying A Rainforest Excursion in Ketchikan We left Seattle and spent one day cruising with Oceania Cruises up the Inside Passage along the coast of British Columbia in Canada. The first port on our Alaska […]

We would love if you could share this!
80
80
Shares

Day Trip Along The Sunshine Coast In BC

A Great Day On The Sunshine Coast In BC There were so many great day trips to take when we visited the Vancouver area on a road trip around BC. It was an easy ferry […]