Balloons of All Shapes Create The Albuquerque Balloon Fiesta Colour

While visiting Vancouver for the fall, we snuck in a side trip to Albuquerque. The Albuquerque Balloon Fiesta had been on my “list” forever. I had seen pictures and videos of this amazing festival but there is no way that you can really imagine what it is like to have 600 balloons all launch from the small area that is the Balloon Fiesta field. Let me try to share some of the wonder of what we saw, but I am sure this will just be a taste test that will add this trip to your list!

If you want to see it all you need to get up very early and be ready on the field before the sun is up to see the first glow as the balloons light up. Dawn Patrol kicks off the day with the U.S. flag overhead as the anthem is sung. 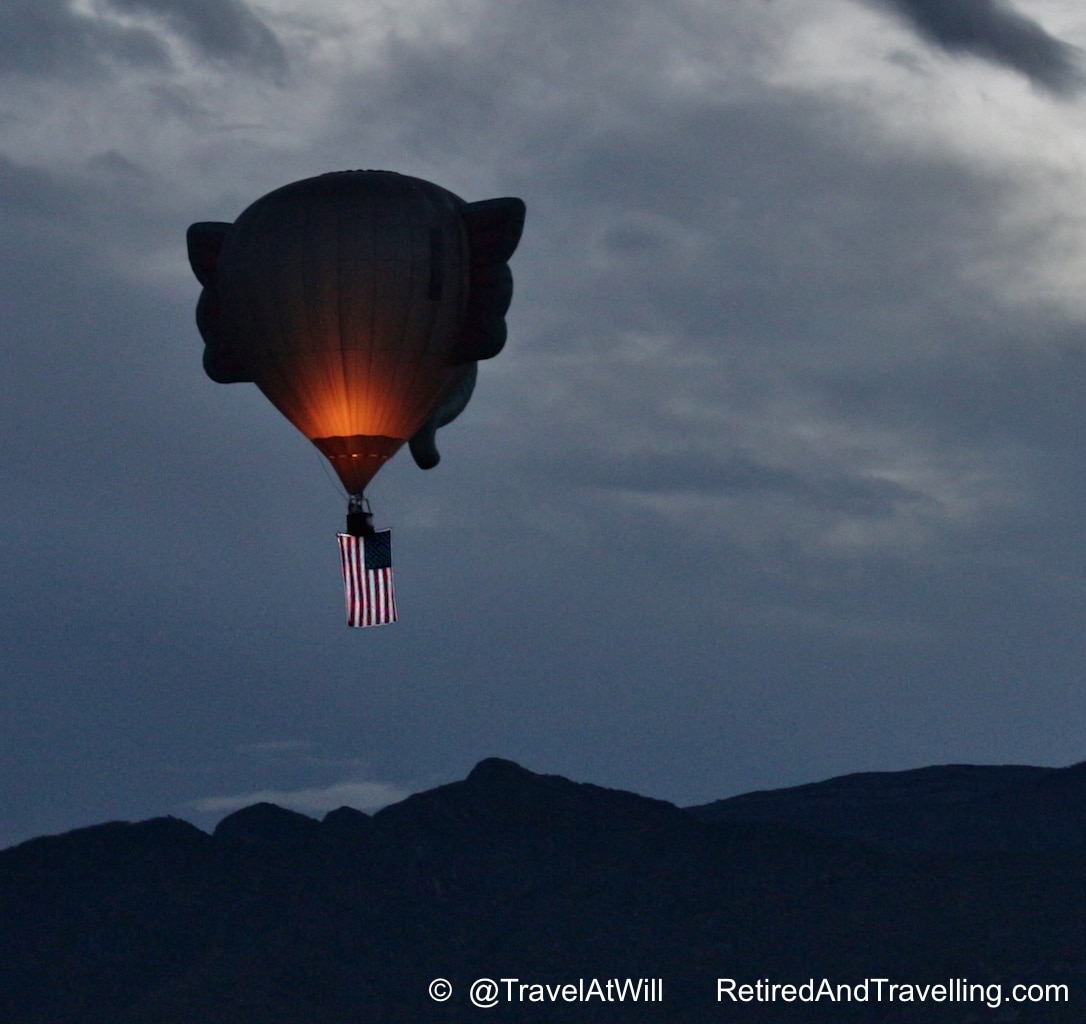 When the sun rose, you could see the field absolutely covered with balloons preparing for the Mass Ascension. As the balloons are filled you can see them popping up one by one. Kids of all ages watched in rapt attention. 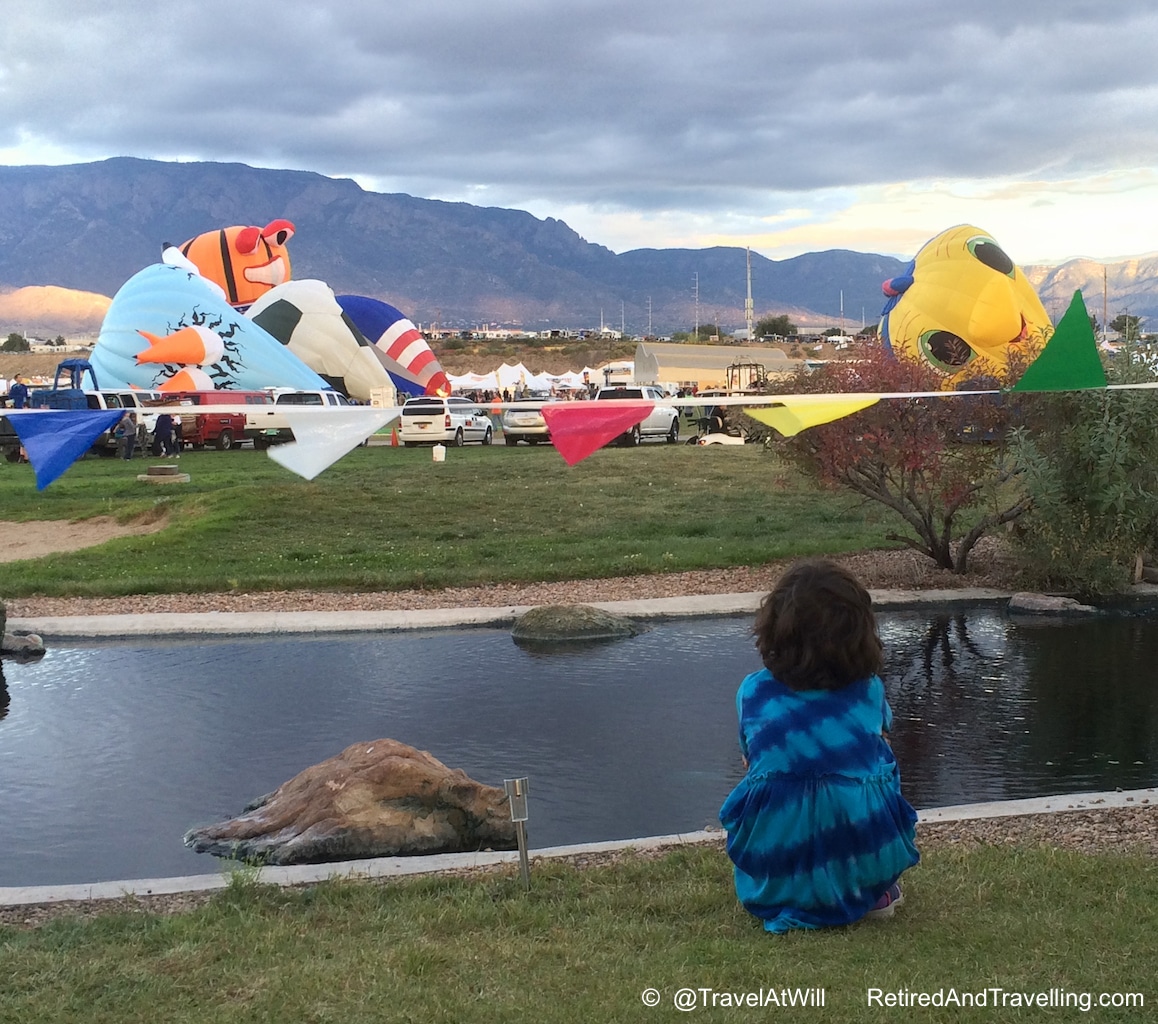 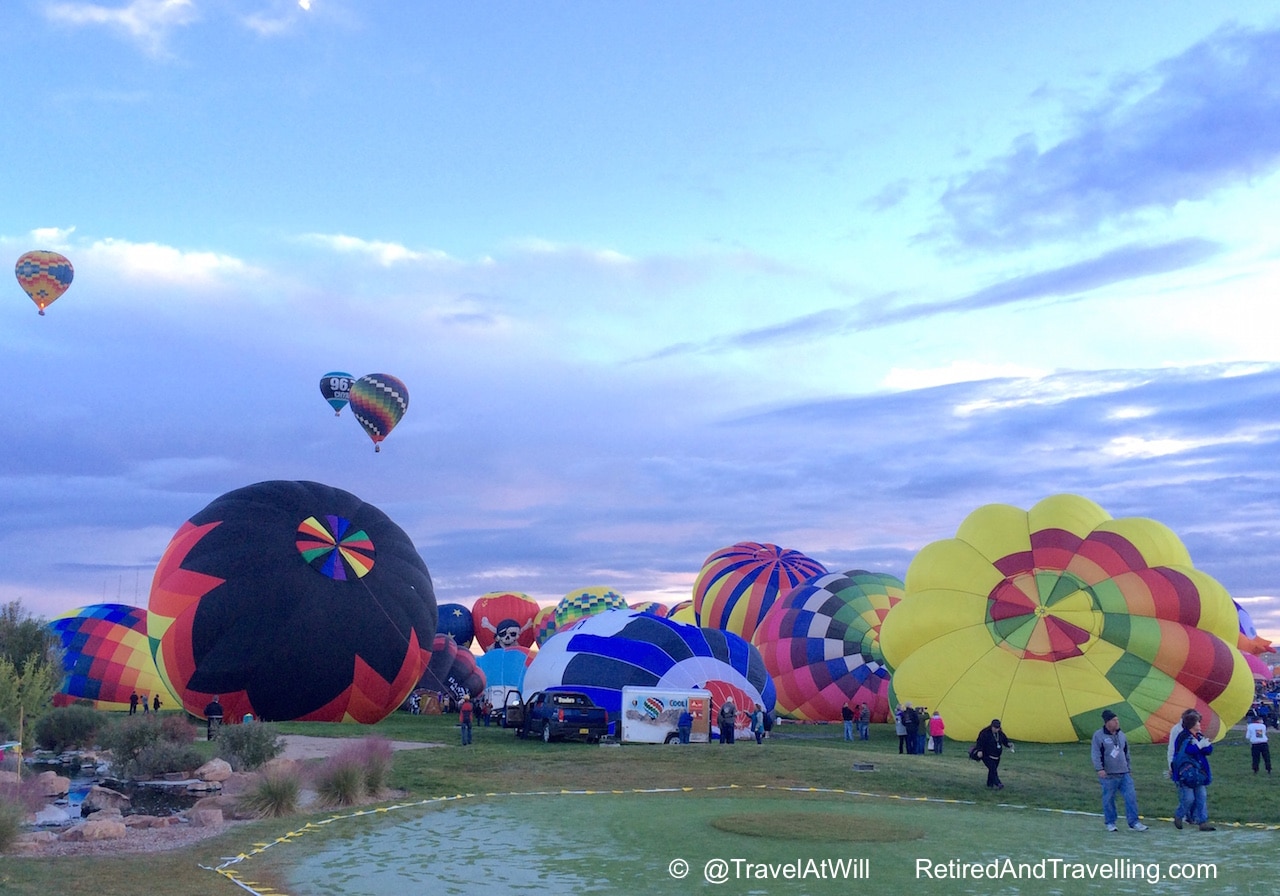 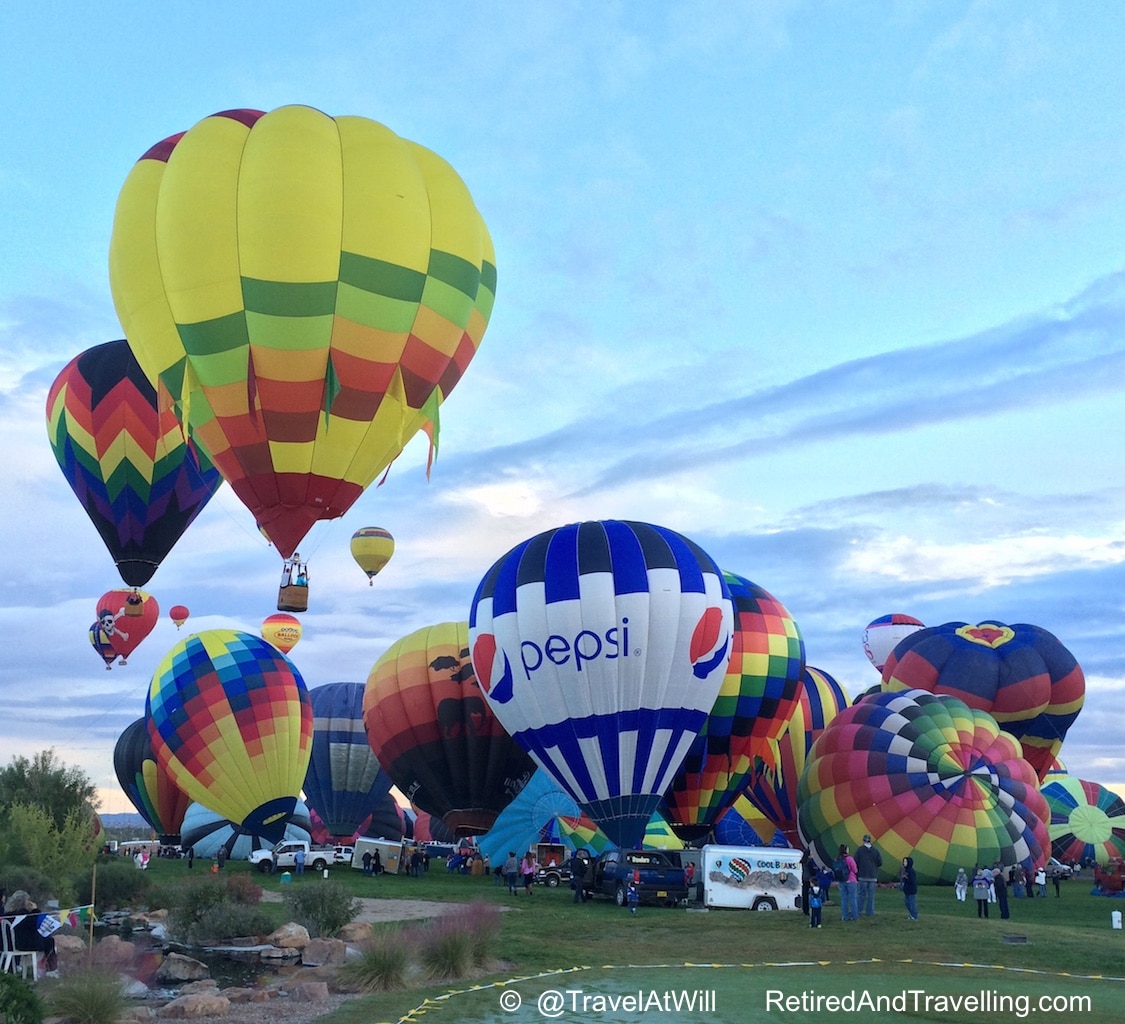 As the balloons became vertical, you finally got a great view of the field of people gathered in under the rising balloons. This is one of the rare ballooning events that let people get this close to the balloons as they are filled and launched. People scrambled quickly to get out of the way when “Balloon up” was heard. 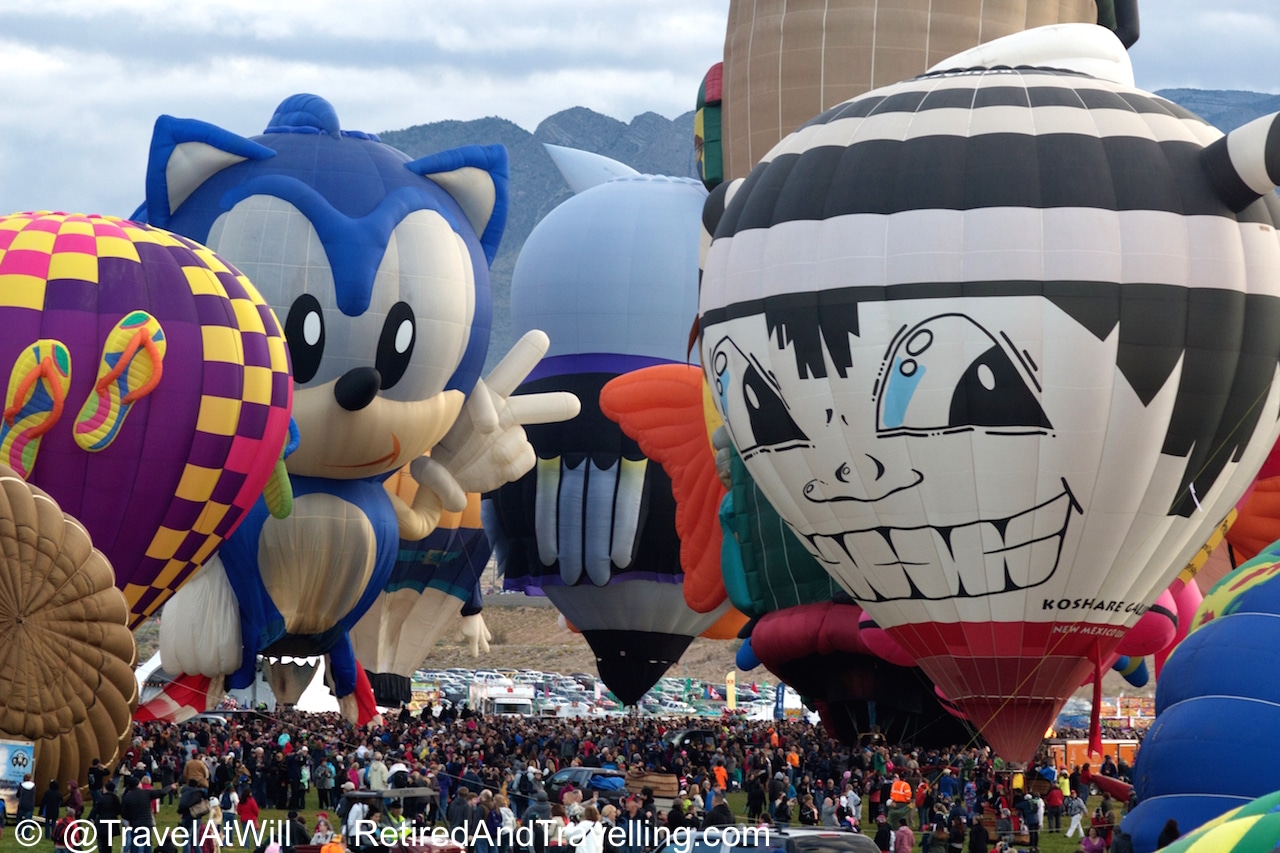 What Is Your Favourite Special Shape?

While there are regular shaped colourful balloons (called envelopes) and sponsor balloons, the most popular attraction was the special shape balloons. It seemed like they were playing together as they filled and jostled for ground space before launching into the sky. 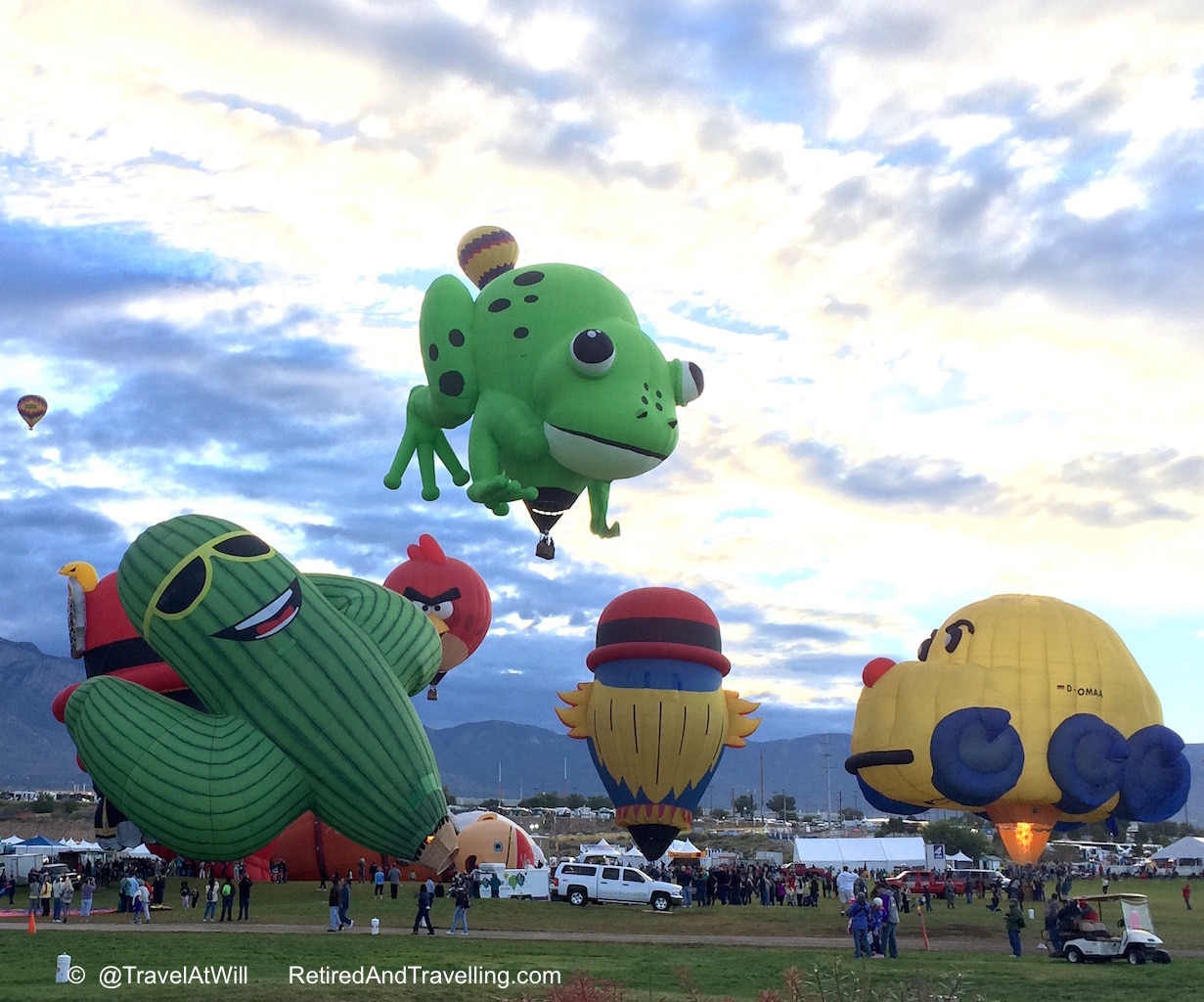 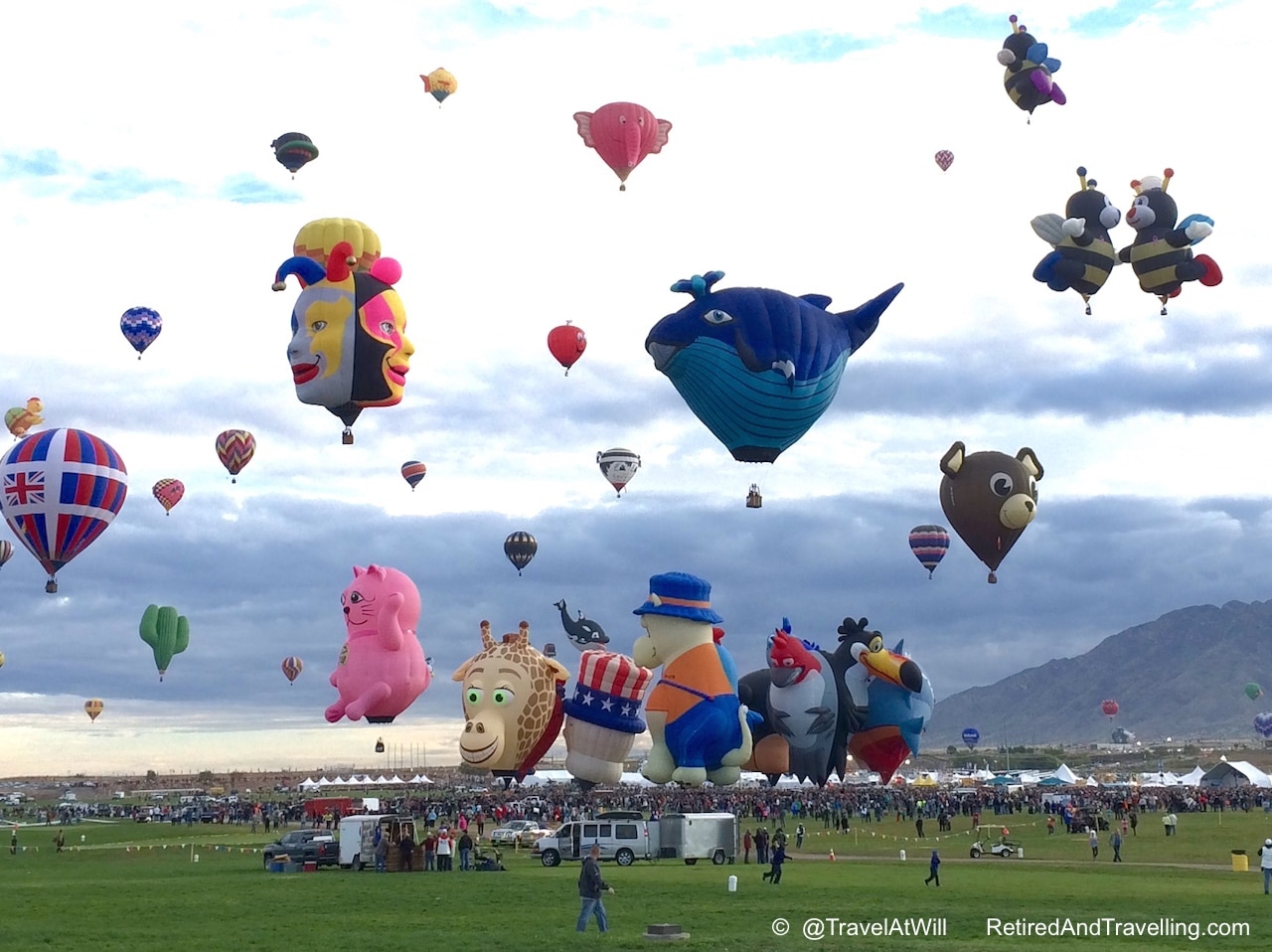 It seemed that everyone had a favourite shape. You could hear people all over the field as they spotted first one and then another. 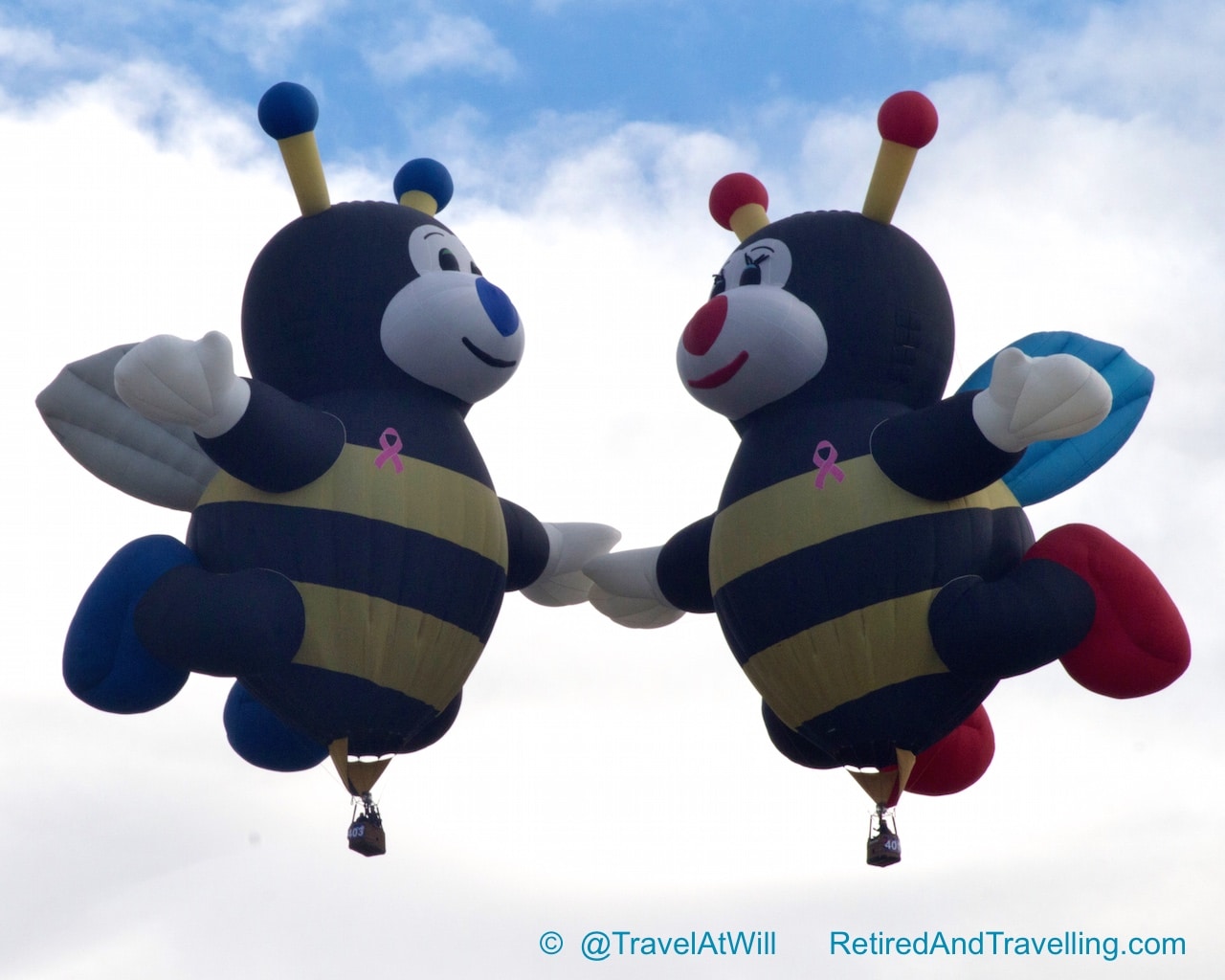 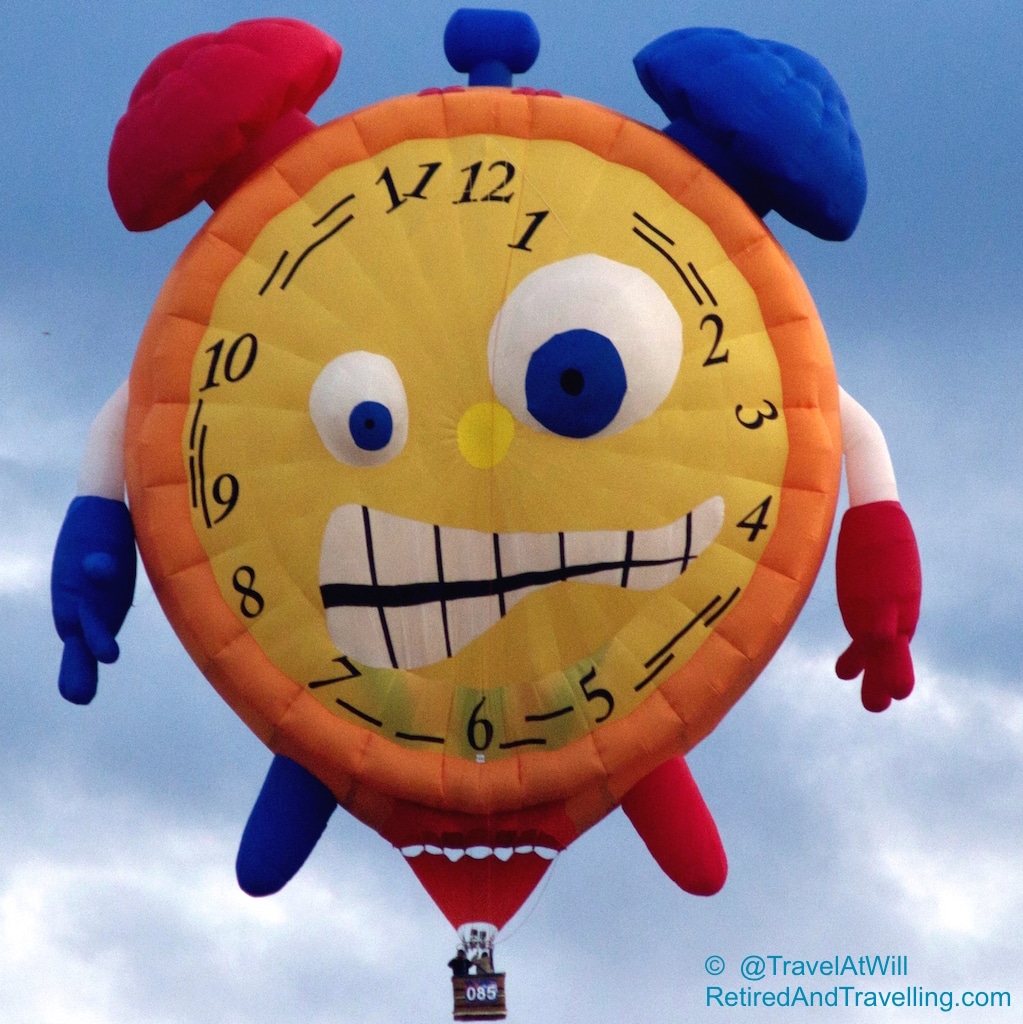 As the balloons cleared above the field, you could see the sky fill with balloons and float with the wind. Sometimes they would touch or “kiss” but generally there seemed to be a orderly progression across the sky. 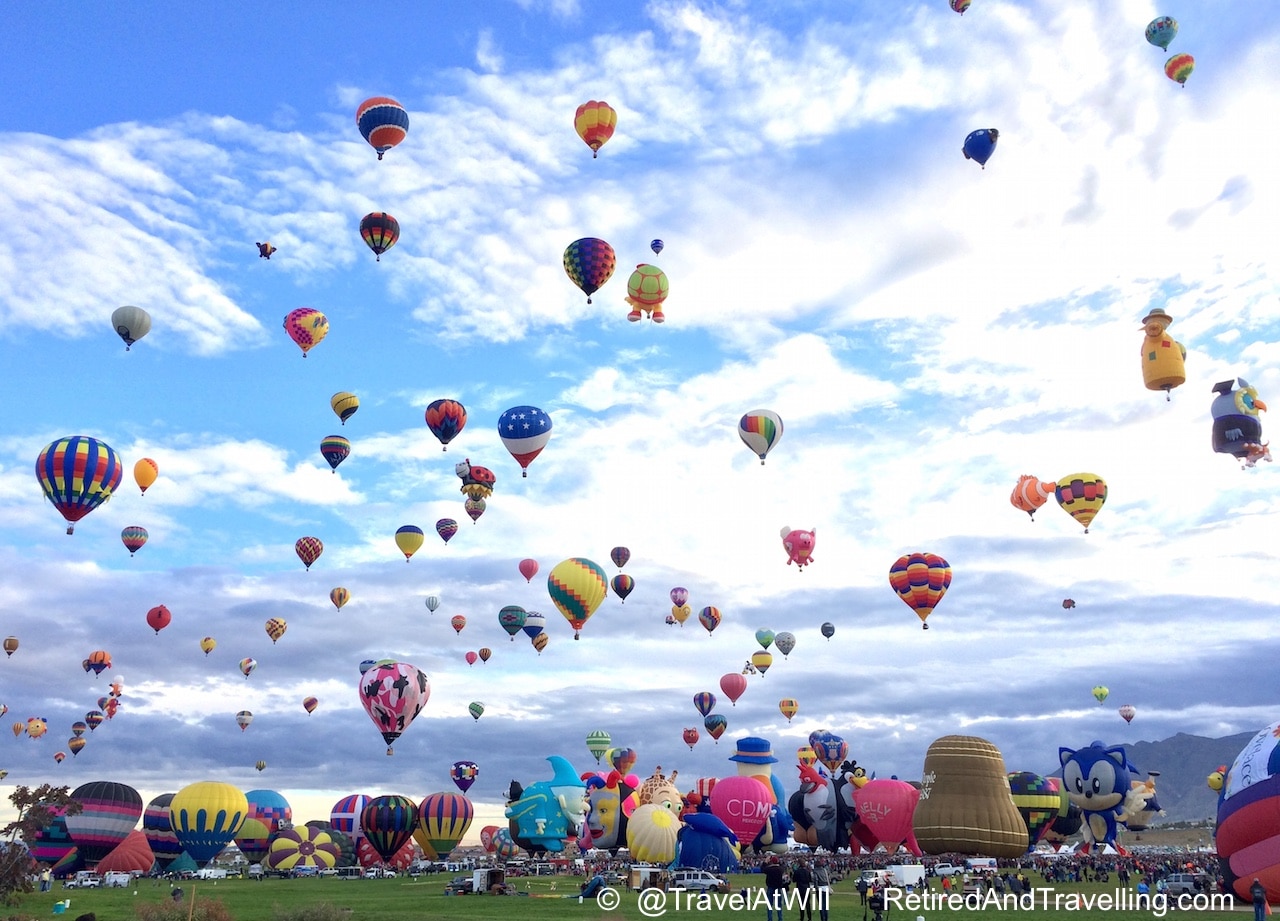 We had splurged on Gondola Club tickets that gave us very special close seating, a buffet and an open bar. Making the most of our trip, we got these tickets for both a Morning Ascension and for the evening Glowdeo. From this great spot, we had a close up view to watch the full show unfold in front of us and sometimes right overhead. 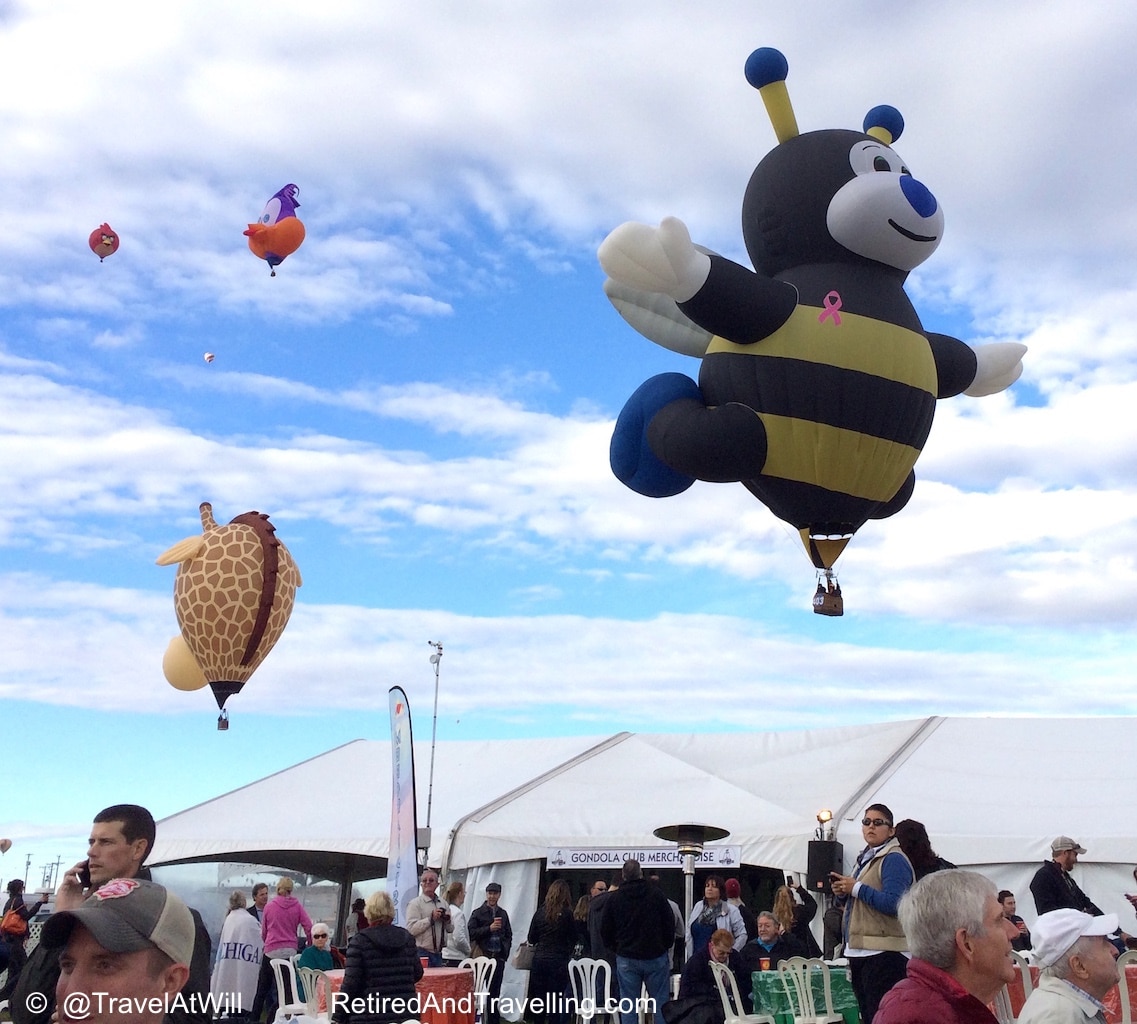 If you did not buy tickets to get on the Balloon Fiesta grounds, there were a number of great spots close to the field where you could catch sight of the balloons, especially after they were all launched. This gave you a good broad perspective and with a good zoom lens or binoculars you could check out your favourite balloons. 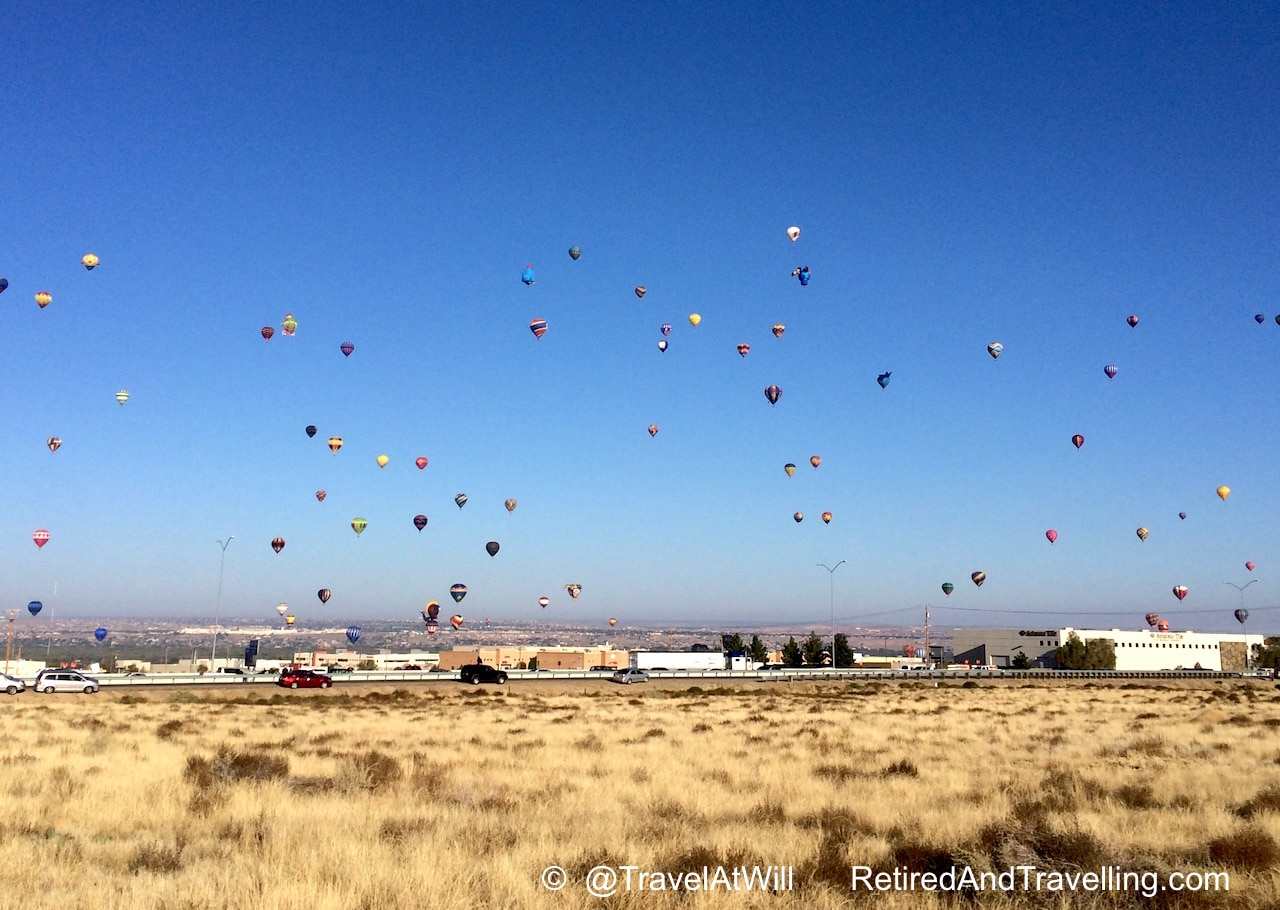 If you stayed in a hotel close to the grounds, you could even sit in the parking lot and get a far distance view of the balloons. It appeared that you could see balloons coming down everywhere! 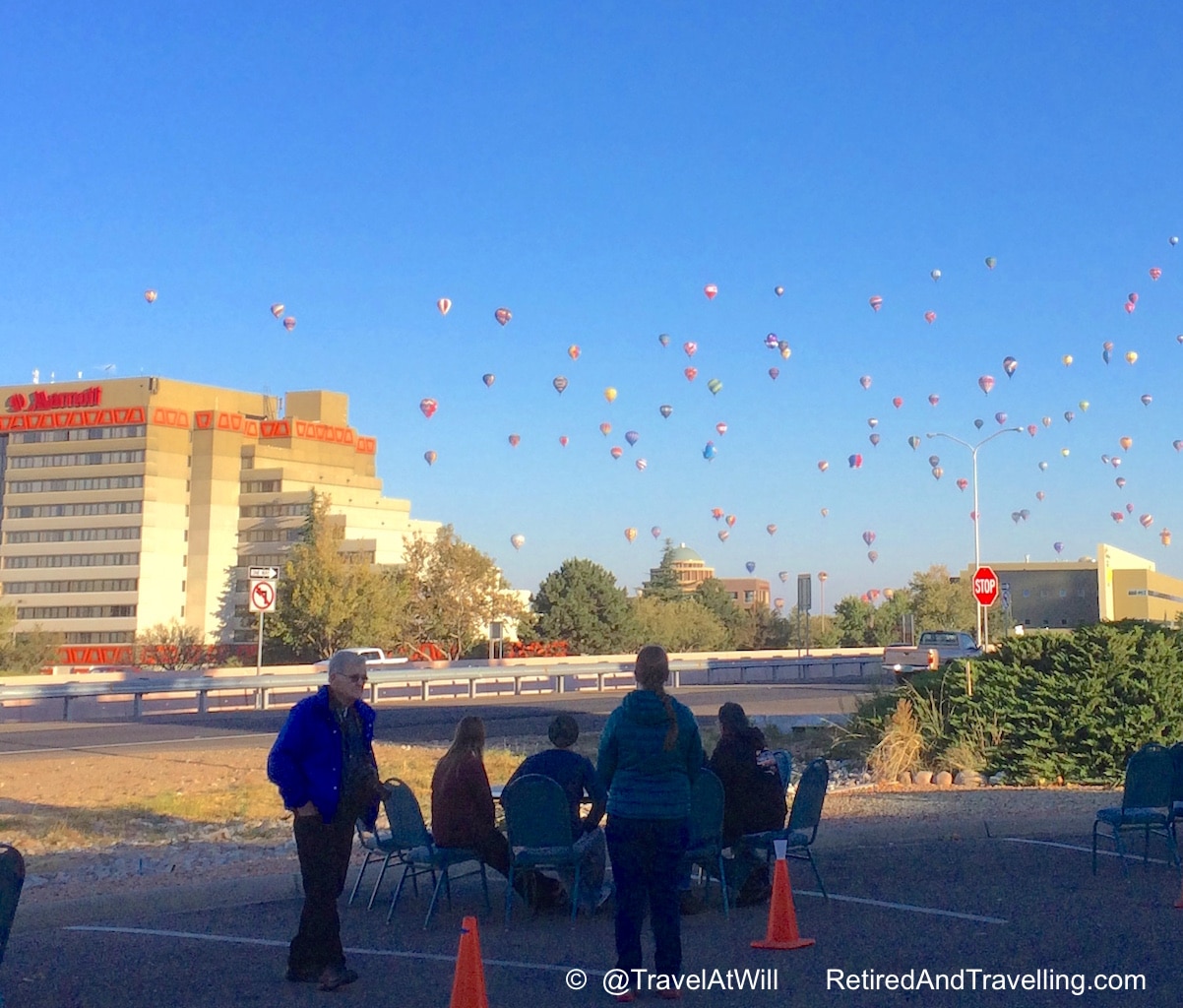 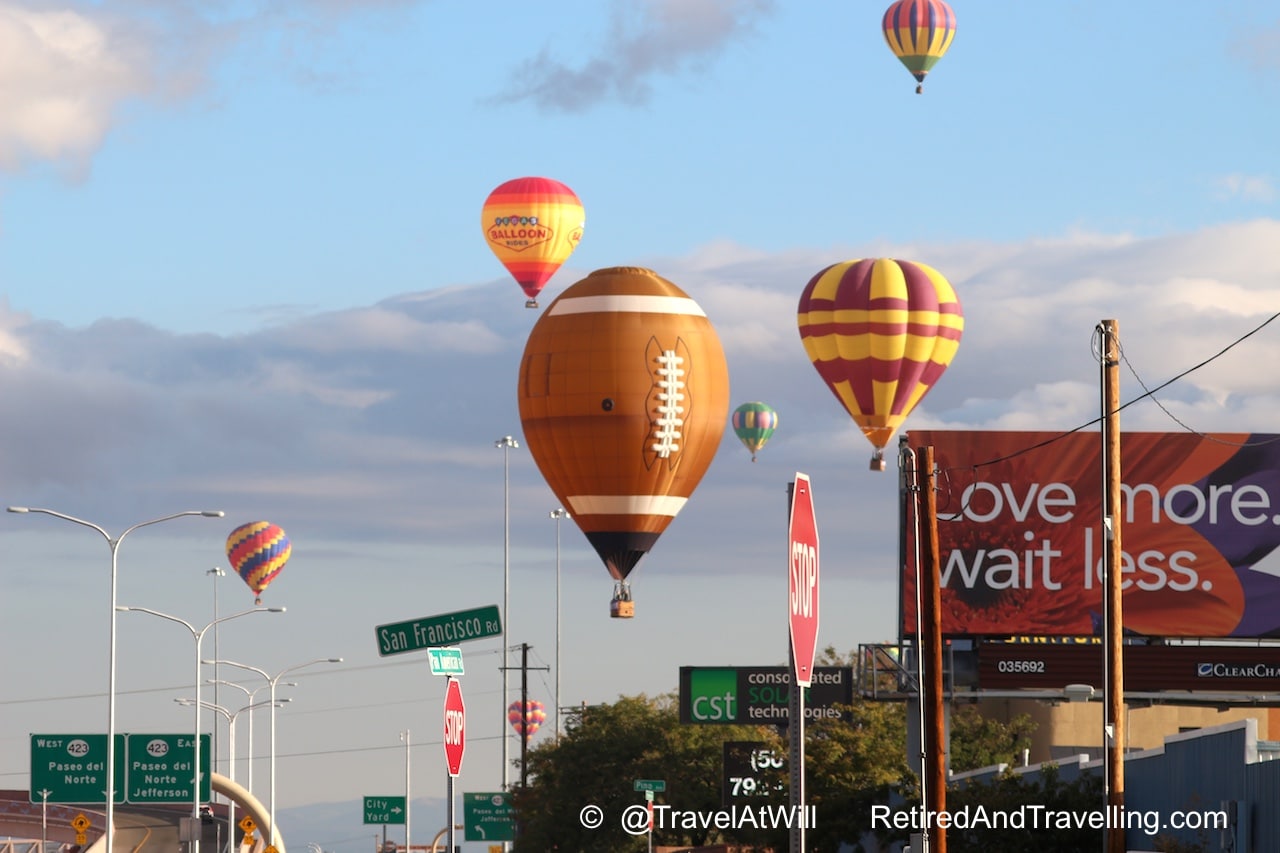 Magic At the Special Shapes Glowdeo

While seeing the Balloons for Mass Ascension was a treat, make sure you get tickets for the evening “Glowdeo”. We were lucky enough to be there on the night they did the Special Shapes Glowdeo.

As dark fell, the flames where shot into the balloons to make them “glow”. While it was a magical sight to see them from a distance, it was wild to walk around under the glowing balloons. Several times they tried to time the lighting to get a mass of balloons all glowing together. 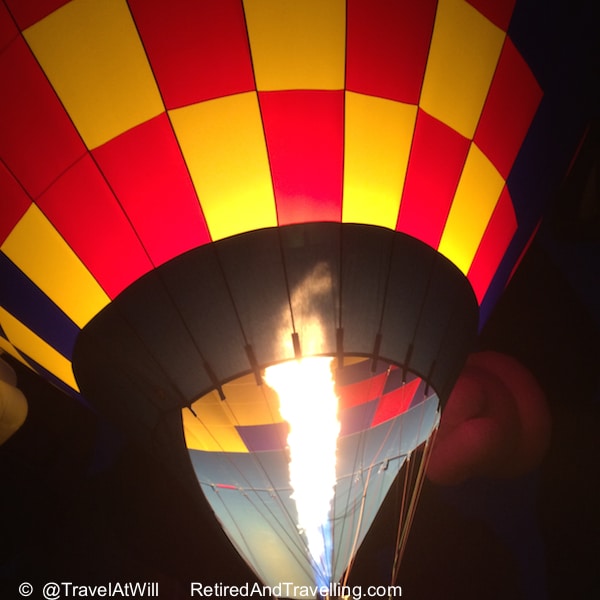 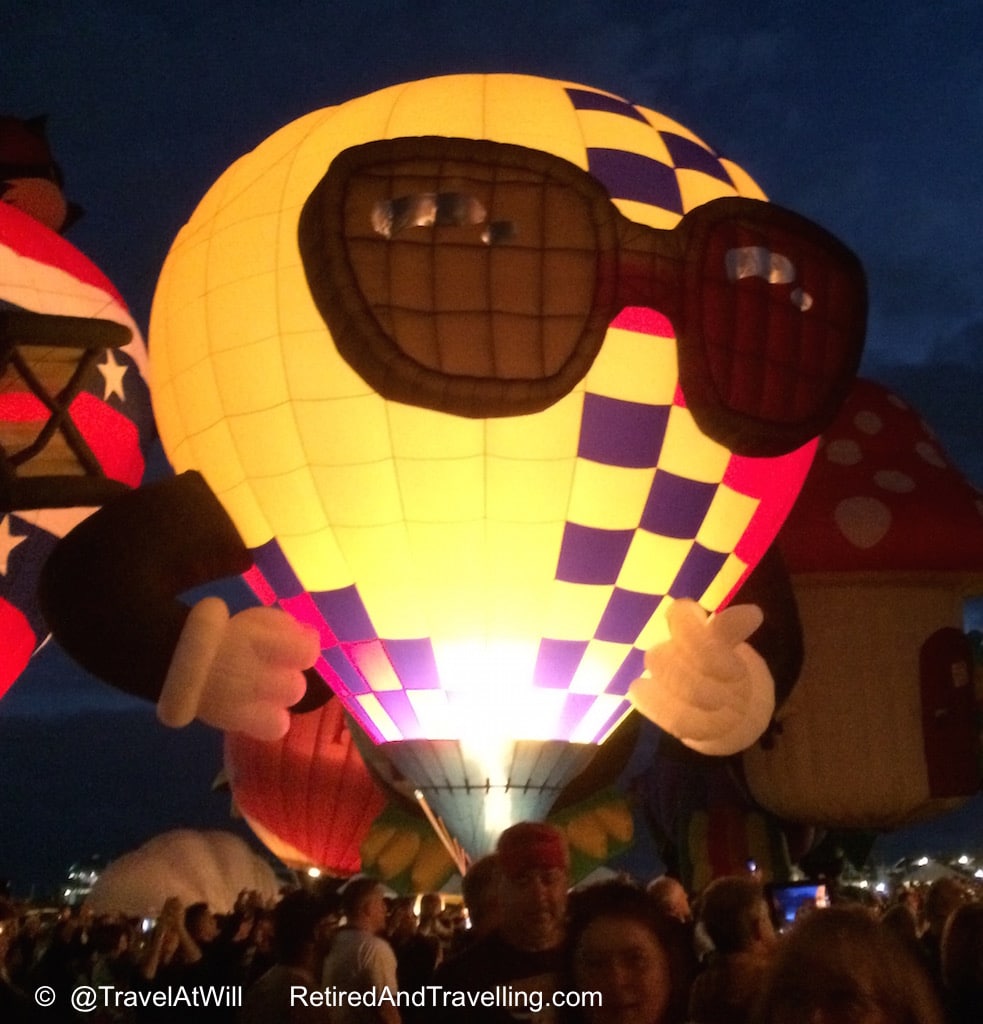 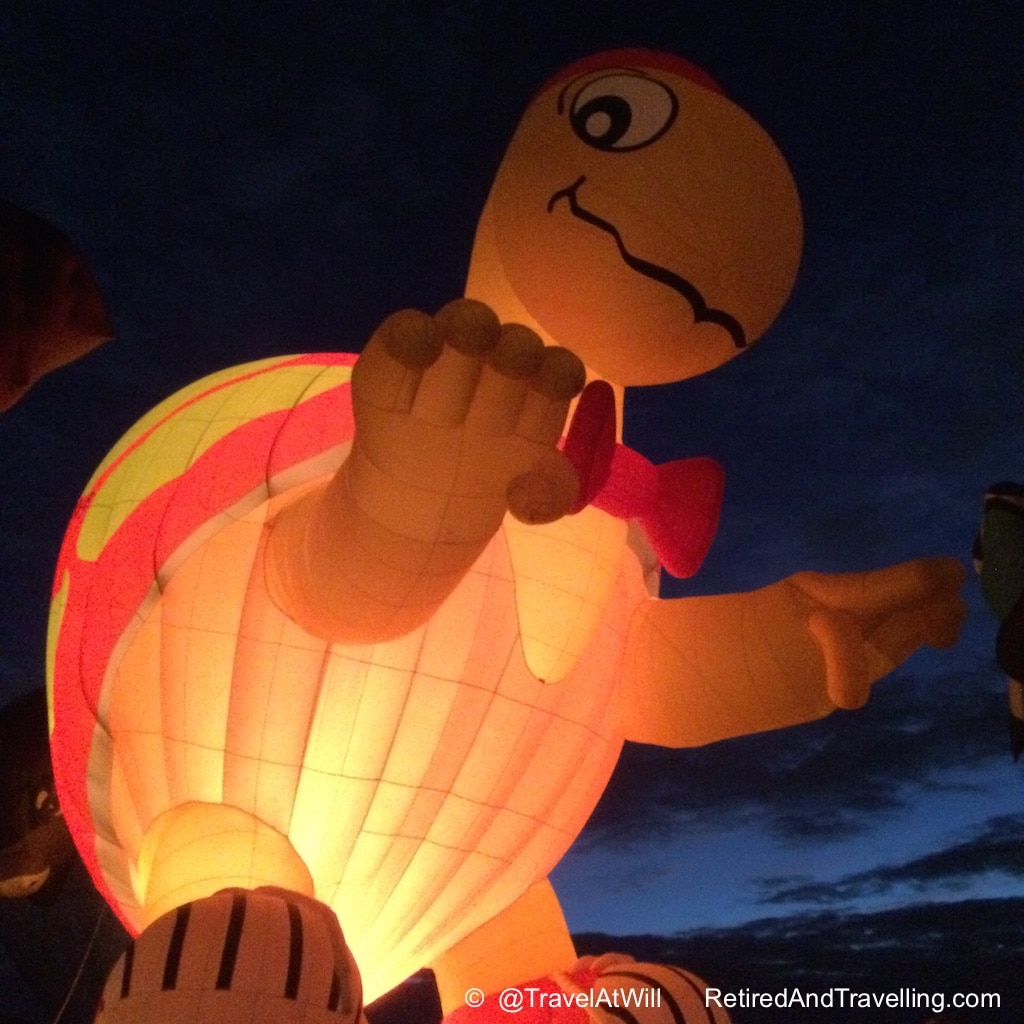 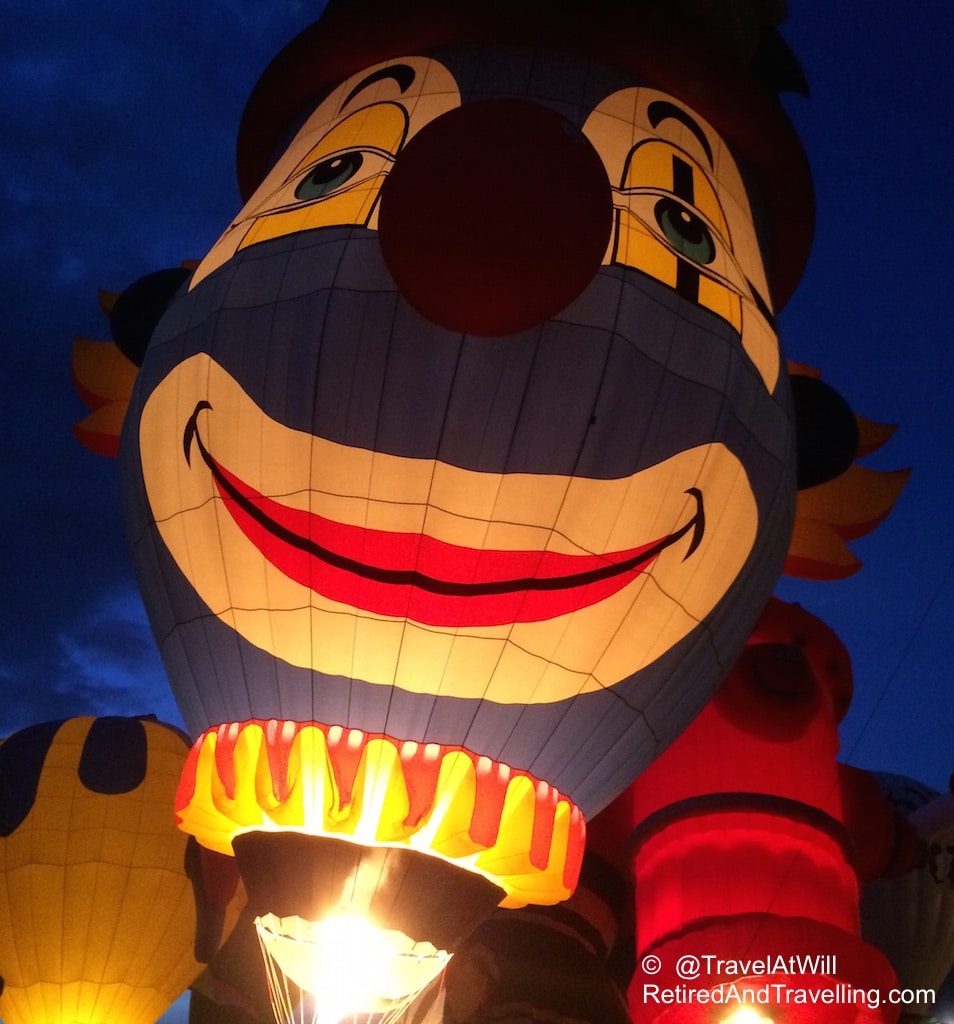 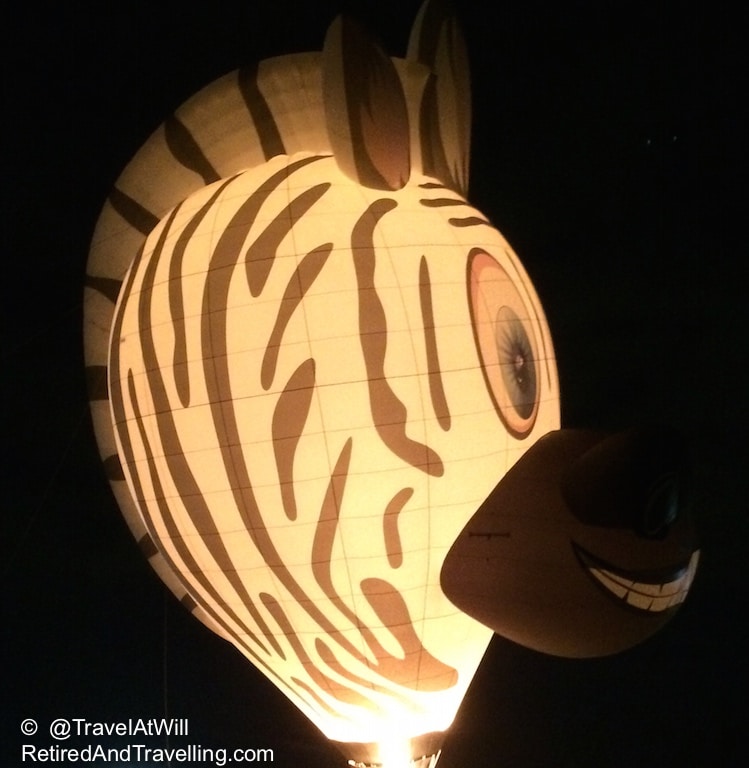 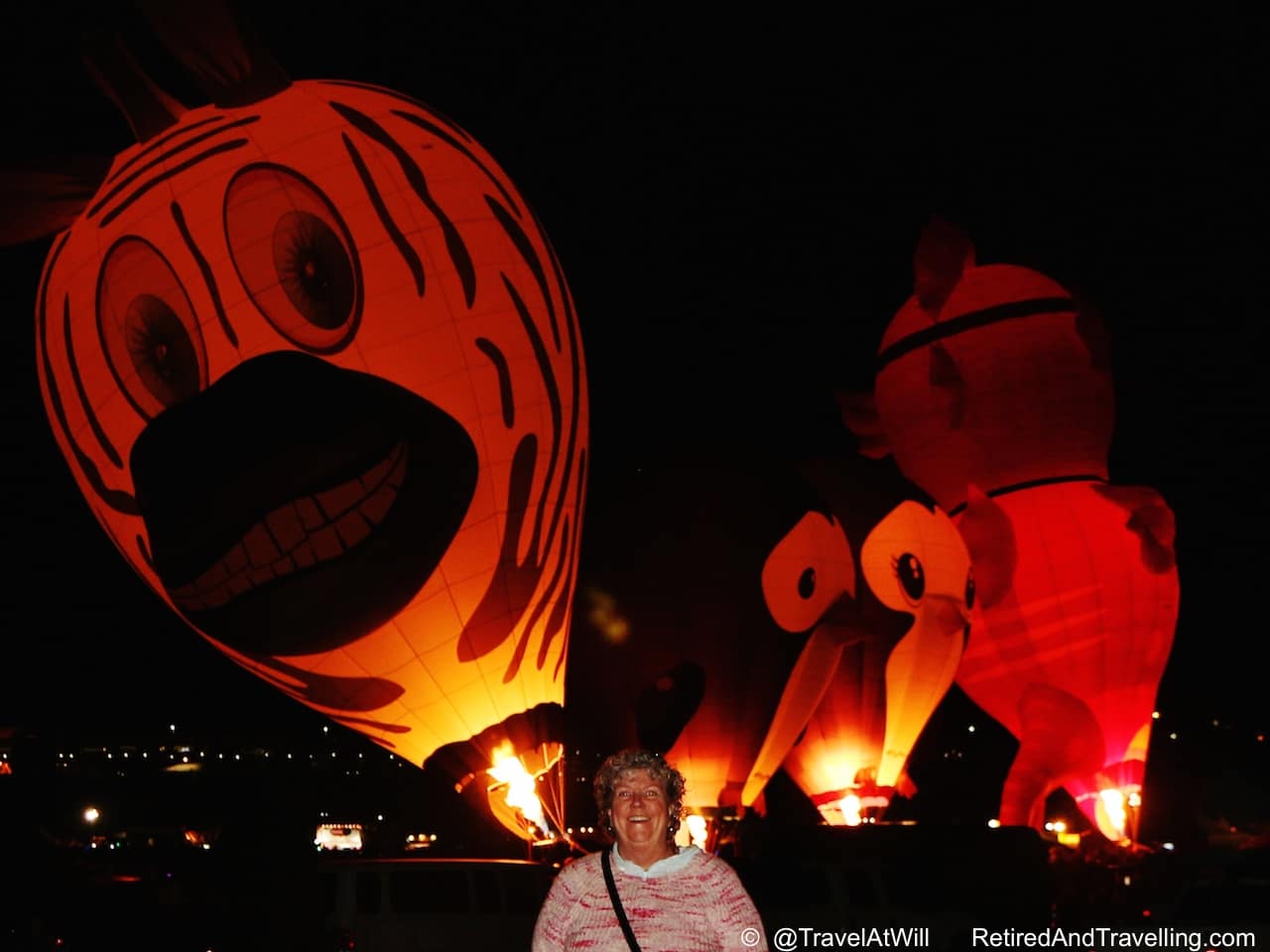 Ending A Perfect Day With A Bang

When full darkness had fallen, the fireworks show began. There were fireworks at a couple of different locations ringing the field and you could watch the displays move around the field. It was a long, bright and colourful way to end a Balloon Fiesta day! 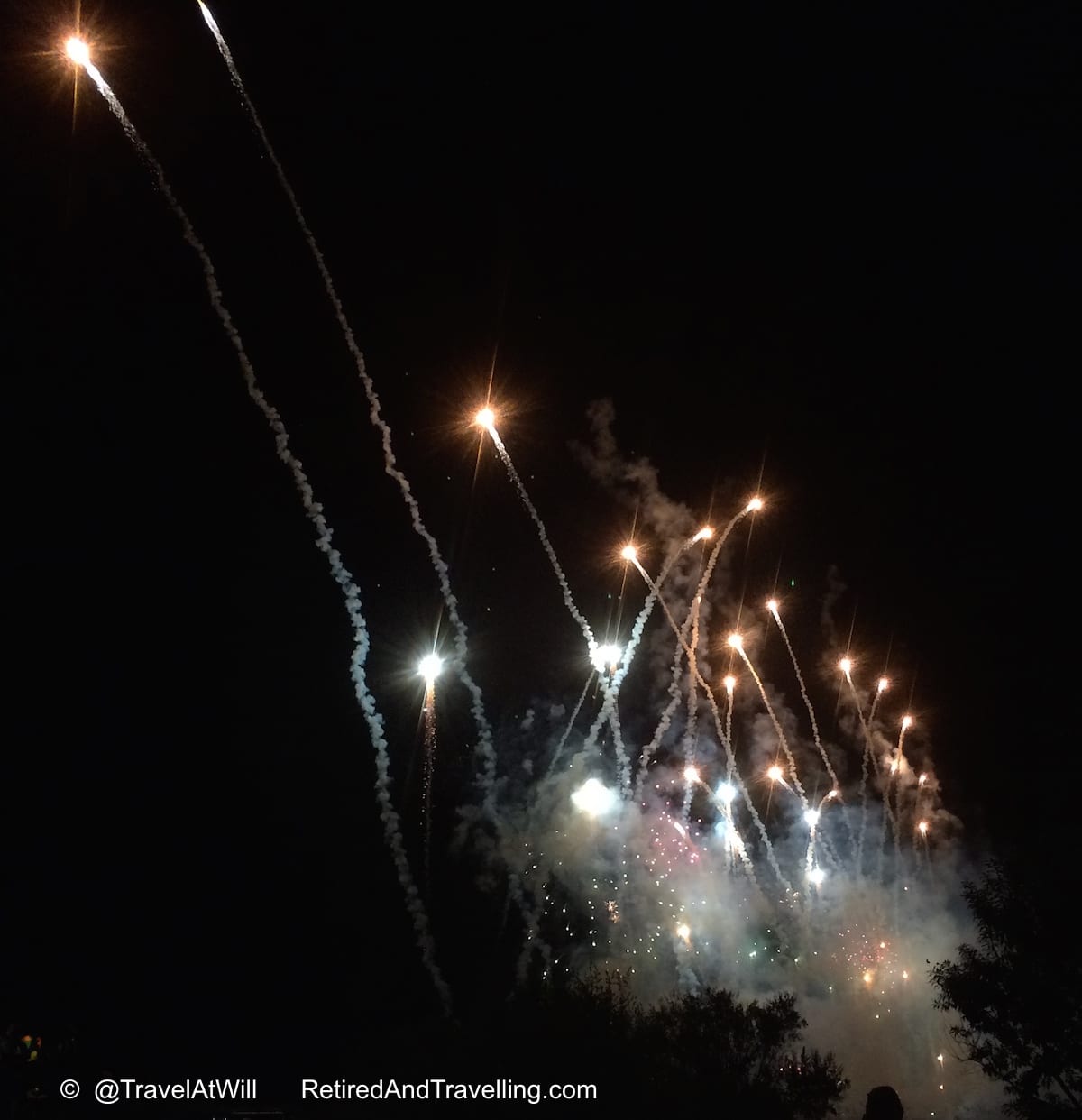 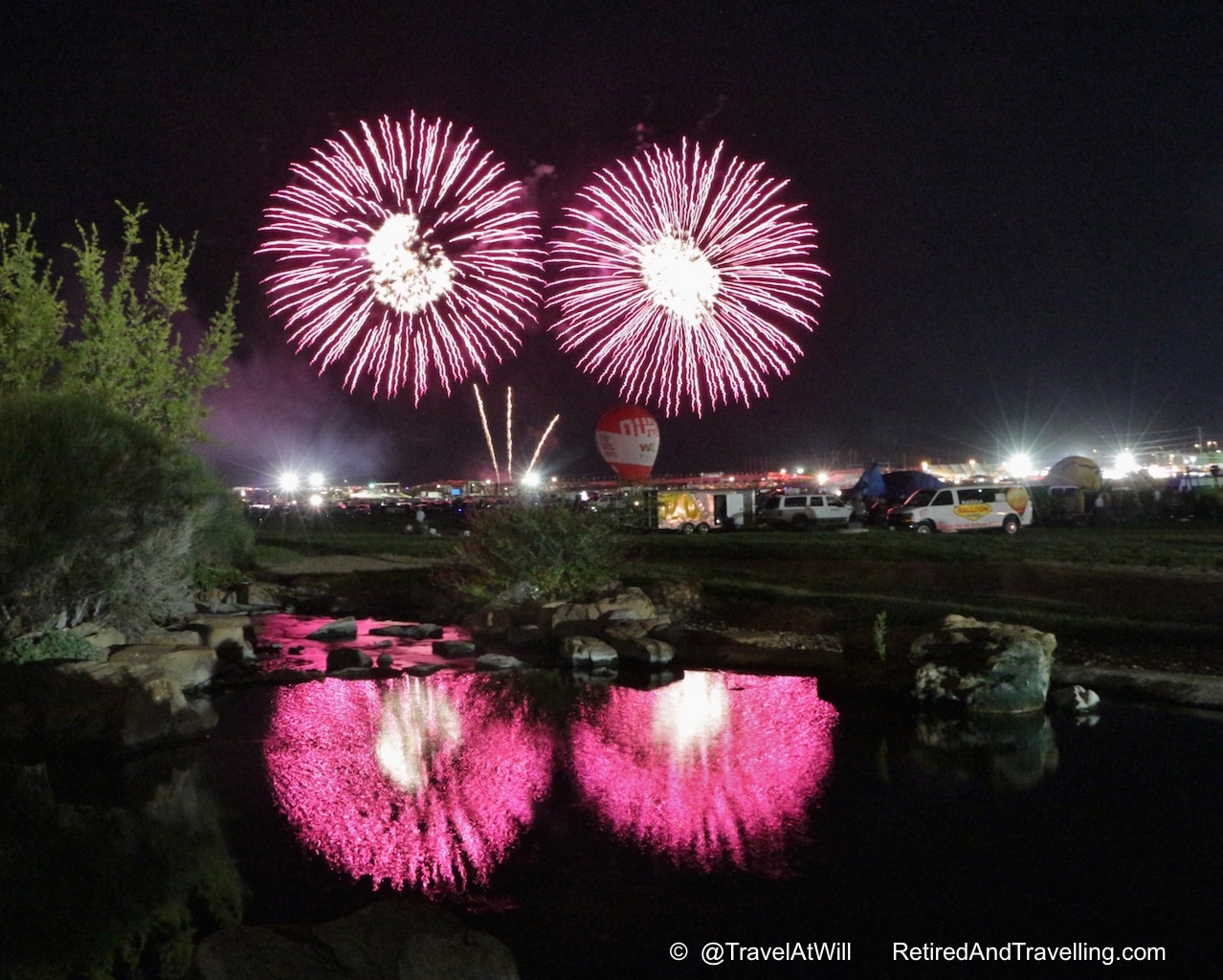 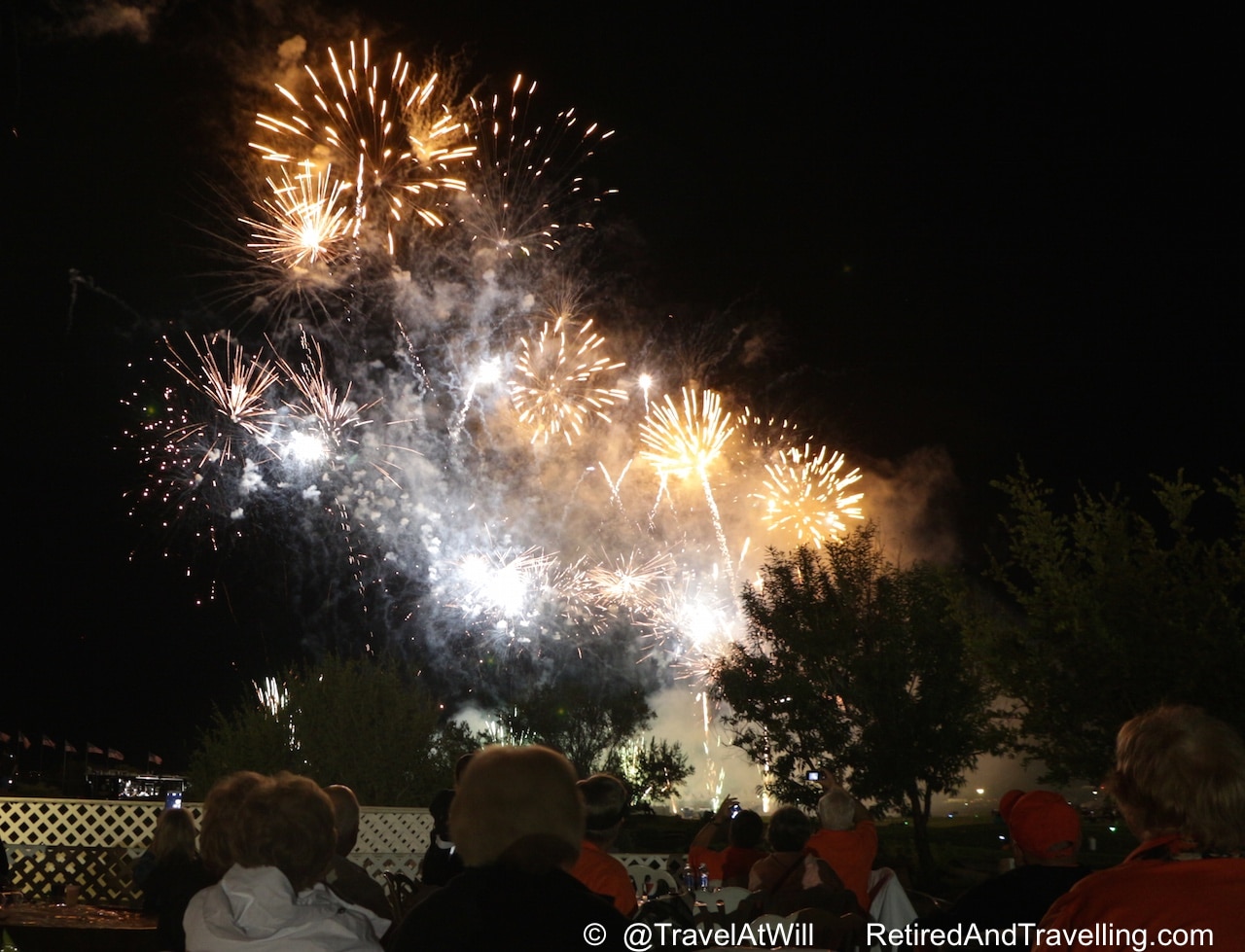 The Albuquerque Balloon Fiesta was a colourful and fun event for kids of all ages. When you visit Albuquerque, you should look at visiting during the Balloon Fiesta.  While you may see pictures of this, there is nothing like seeing it in person, especially on the field up close with the balloons. This whet our appetite for bigger than life exhibits and our coming trip to see the Spokane Chinese Lantern Festival.

Have you experienced the Albuquerque Balloon Fiesta colour? Did you go right down into the field with the balloons? Do you have a favourite special shape? 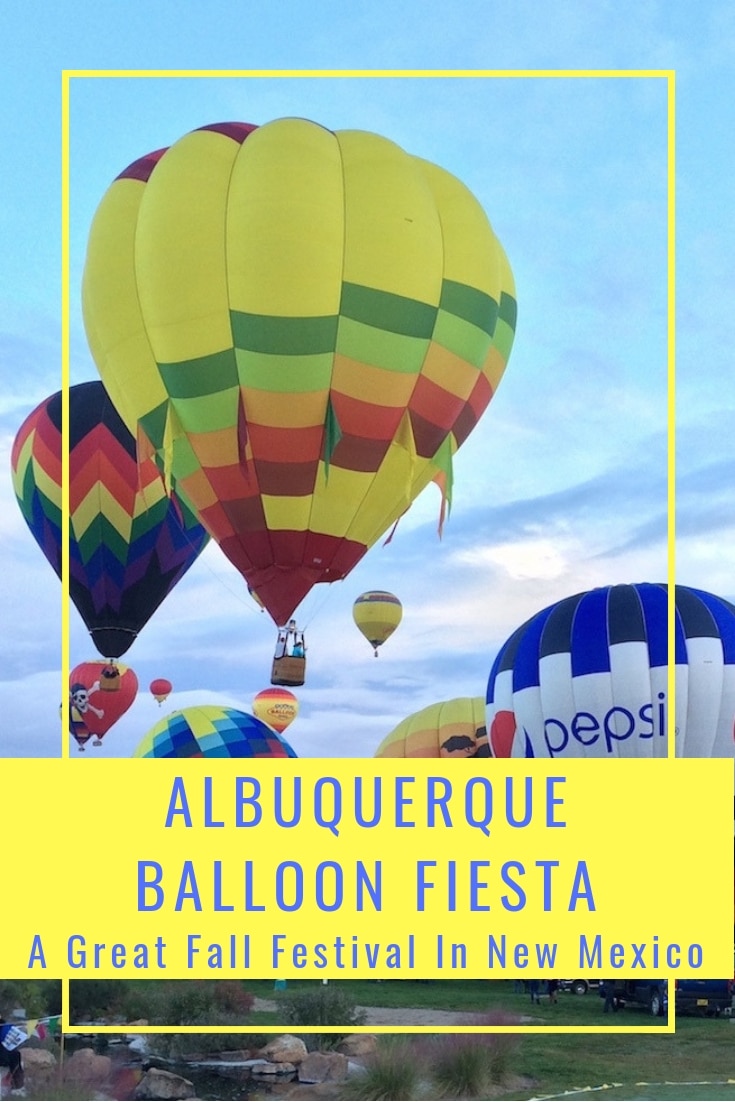 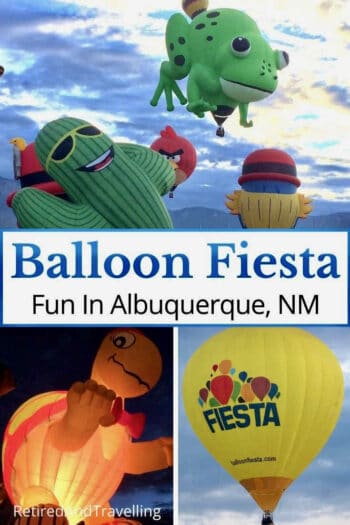 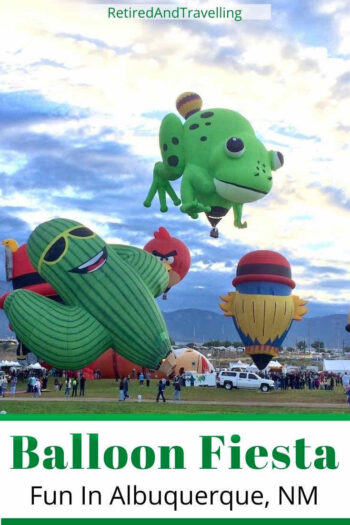 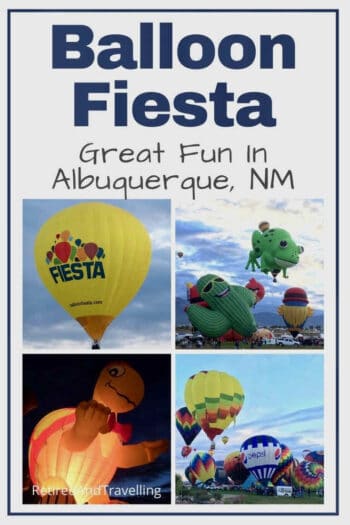