We were happy to leave Bangkok and the smoggy heat for a week to head to the Krabi beaches. Our short stop in Bangkok and our busy 3 days in Singapore had left us wanting a lazy beach retreat. The first stop would be a week in Krabi at Ao Nang Beach. We would then take the ferry to Phuket and Patong Beach for 2 days before returning to Bangkok on our way home.

Our  beach stay was for only 9 days, so I was determined to fly with less baggage. We re-packed our bags, being realistic about how much clothes we really needed in 36°C temperatures. This allowed us to check our 2 large bags at the airport in Bangkok (BKK). At 100THB per day per bag (about $3.50CAN), it was far cheaper than paying for excess baggage and carting a whole bunch of extra stuff. Yes – this was yet another lesson on how bad I had packed for this trip!

There were over 20 options per day to fly from Bangkok to the Krabi beaches. We finally decided to fly Thai Air since they flew from BKK Airport. This would make it easier when we came back to Bangkok BKK for our final departure. There are no shortage of reasonably priced options to fly around Thailand.

Our son Nick on his early visit to Thailand chose to use buses and ferries to get around. When he returned to Thailand later in his trip, he realized how much faster and not much more expensive it was to travel by air. Of course, he was travelling with a knapsack and had much less baggage issues than we did.

Getting To Ao Nang and The Krabi Beaches

It was a quick flight from Bangkok to Krabi. We saw a little of the countryside as we flew in. 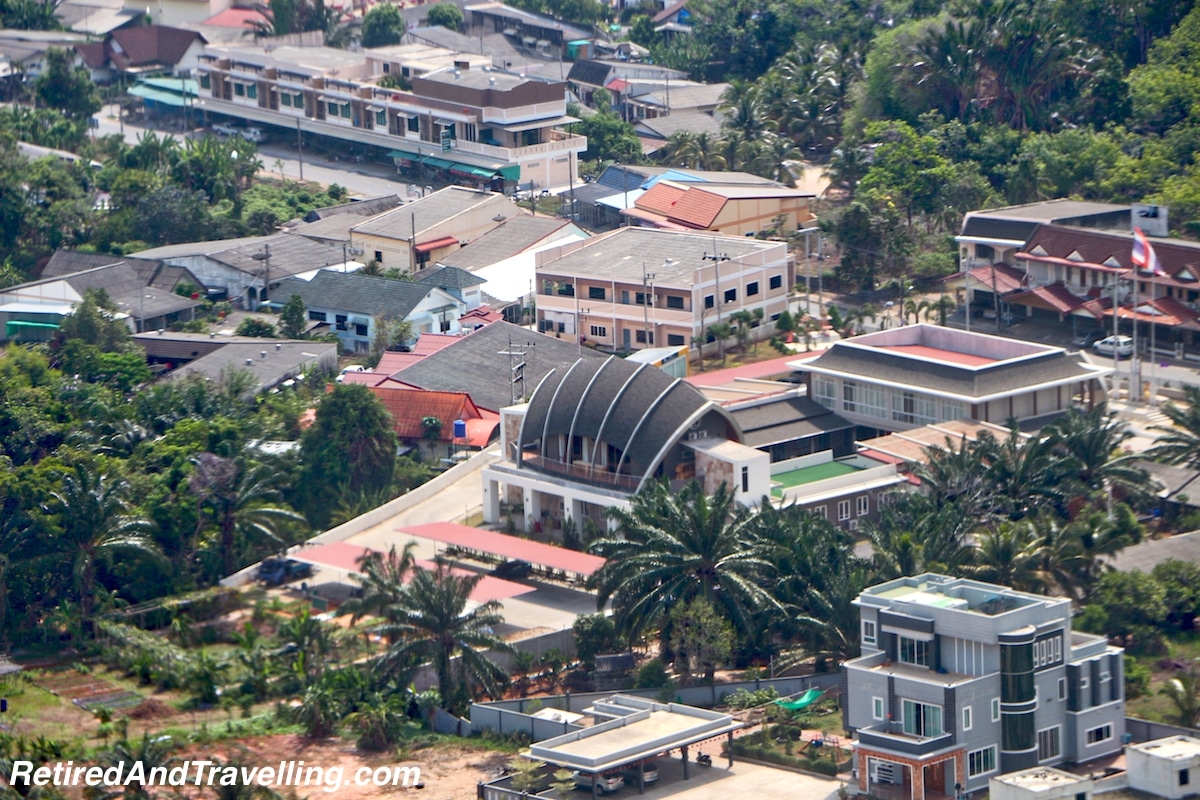 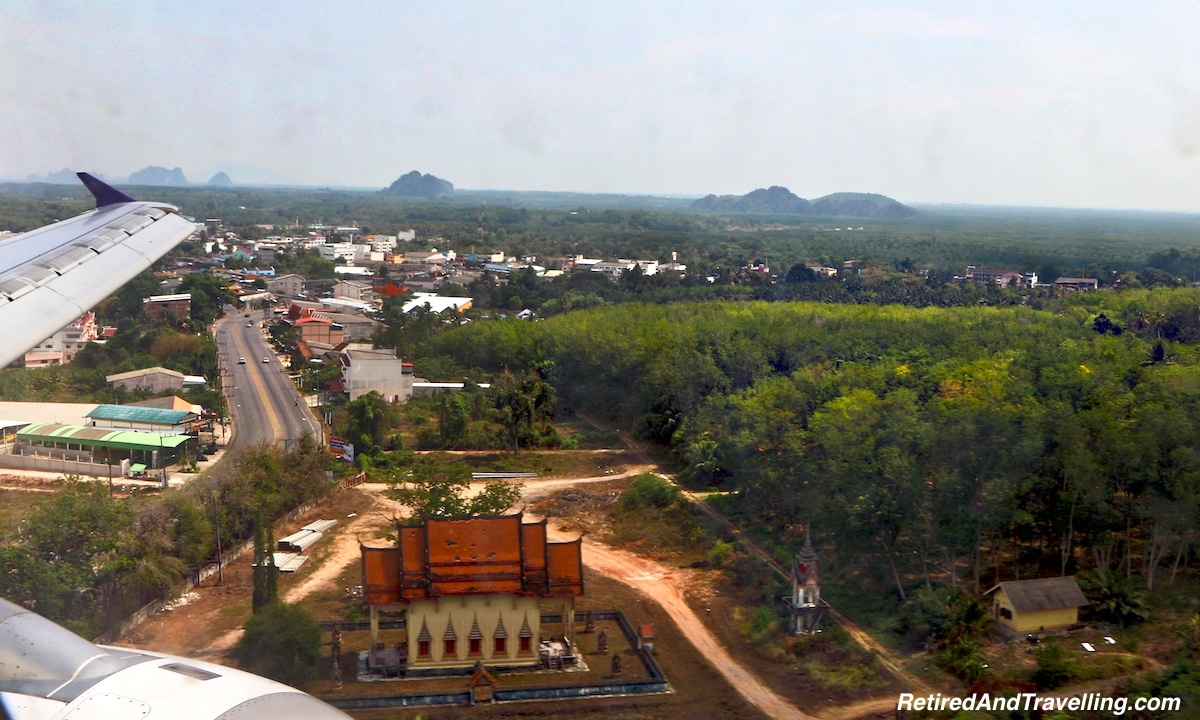 Landing in Krabi City, we chose to use the taxi counter to book a taxi rather than haggling with taxi vendors at the front of the airport. There is usually a slight premium to getting your taxi this way but then we found transportation to be generally very expensive if you were in any way a captive audience.

A Drive To The Krabi Beaches

We drove through a rainstorm on our 30 minute trip to the Ao Nang area of Krabi beaches. We had hoped that maybe the rain would knock down the humidity level and clear the incessant haze from the sky. But that was not the case. For our whole week on the Krabi beaches, there was a haze over the sky and the rocks far in the distance remained blurred. We kept being told that the weather would break soon, but not while we were there. 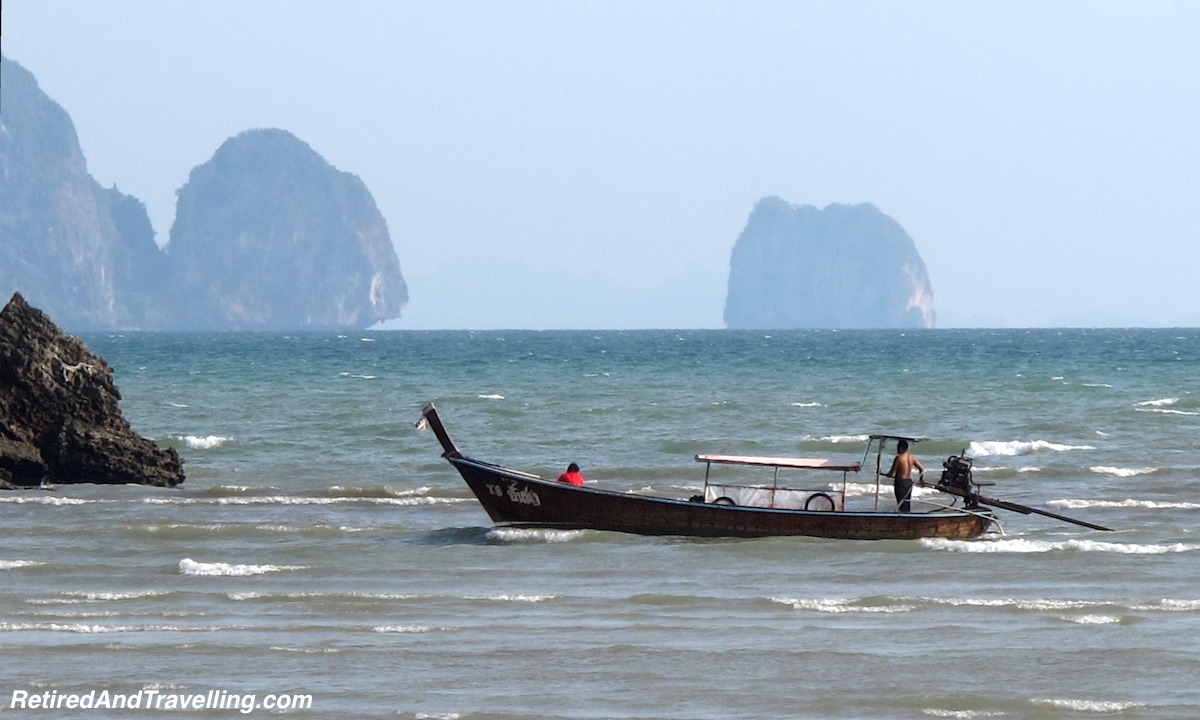 Arriving at the Holiday Inn Resort at Ao Nang Beach, we were greeted and immediately presented with our cold cloth. I think this came to be my favourite custom in SE Asia. The ice cold wet cloths, gently scented with local flowers, could instantly revive me. We had enjoyed this tradition on our stay in Bali and I got spoiled almost every time I sat down at this resort on the Krabi beaches with a cooling cloth.

I was sick most of the time we were at the Krabi beaches. In Bangkok, I had barely recovered from my lower respiratory tract infection when both David and I were hit with travellers belly. Arriving in Krabi, this kept us close to the hotel. We were less interested in tours to the outer islands on long-tail boat trips with no bathroom in sight. David recovered more quickly, probably because my first round of antibiotics likely left my digestive tract more open to invasion. But if I needed to laze and relax for a week, I couldn’t have been at a better resort!

There were many things to do around Ao Nang Beach for the week of our stay.

At the Holiday Inn Krabi Resort we enjoyed a lazy time while pampered by excellent customer service. 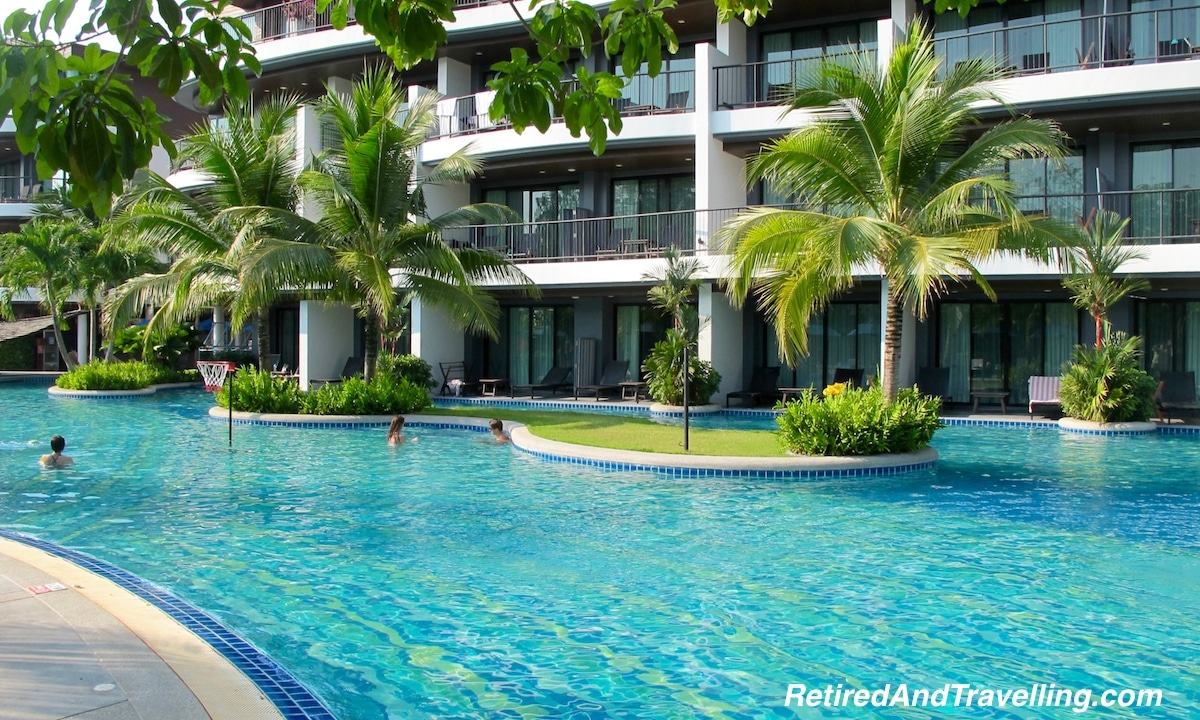 Our awesome penthouse suite on the top floor even had a private pool and an outdoor shower! 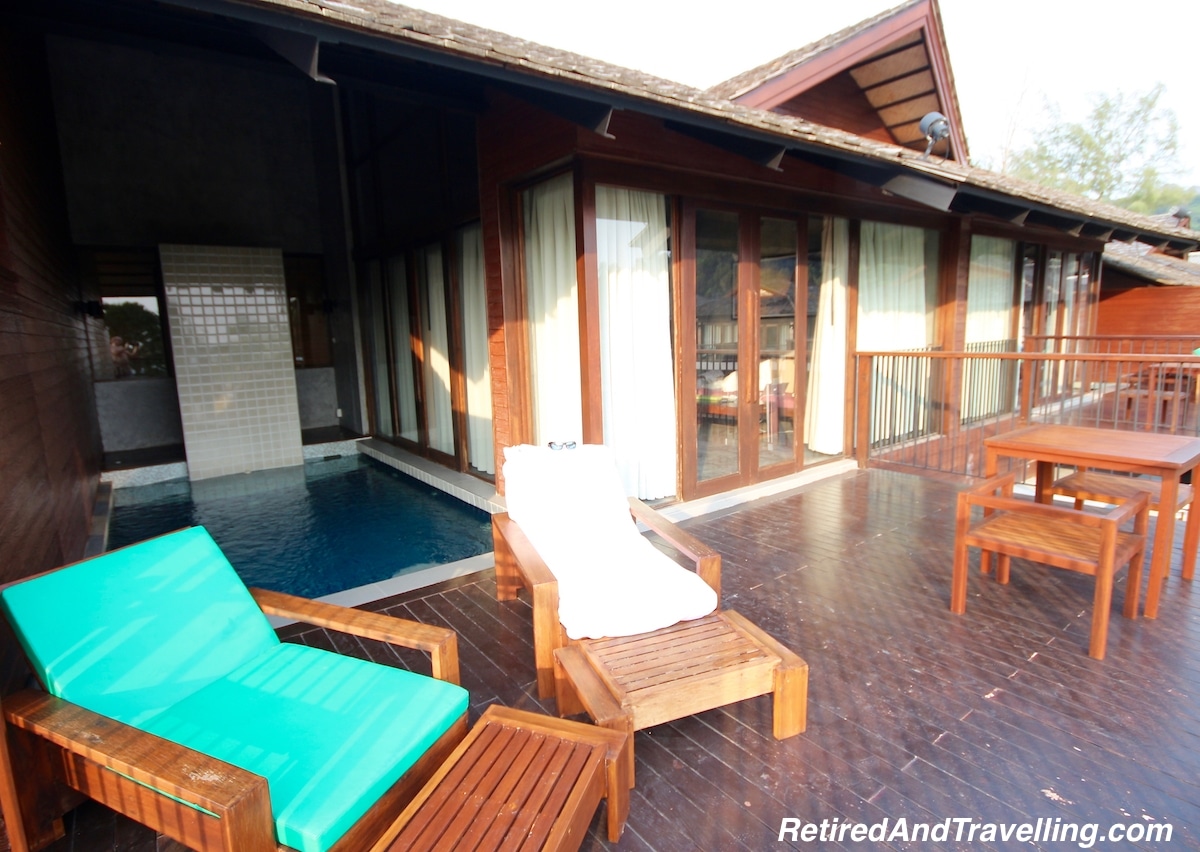 The beaches are sandy and shallow. The long stretches of beach encourage long beach walks or just settling down for the sunset. 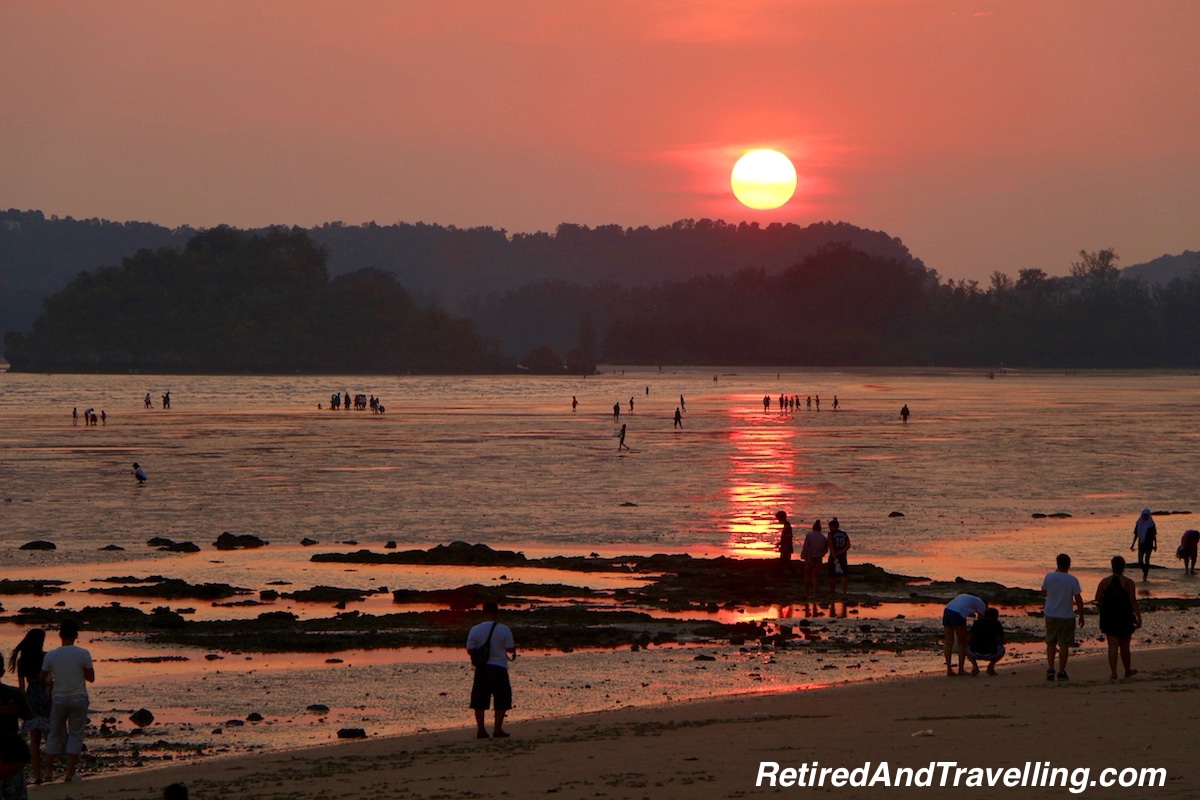 The long-tail boats can pull right up to shore. They offer an easy option to wander by water to other beaches near by. 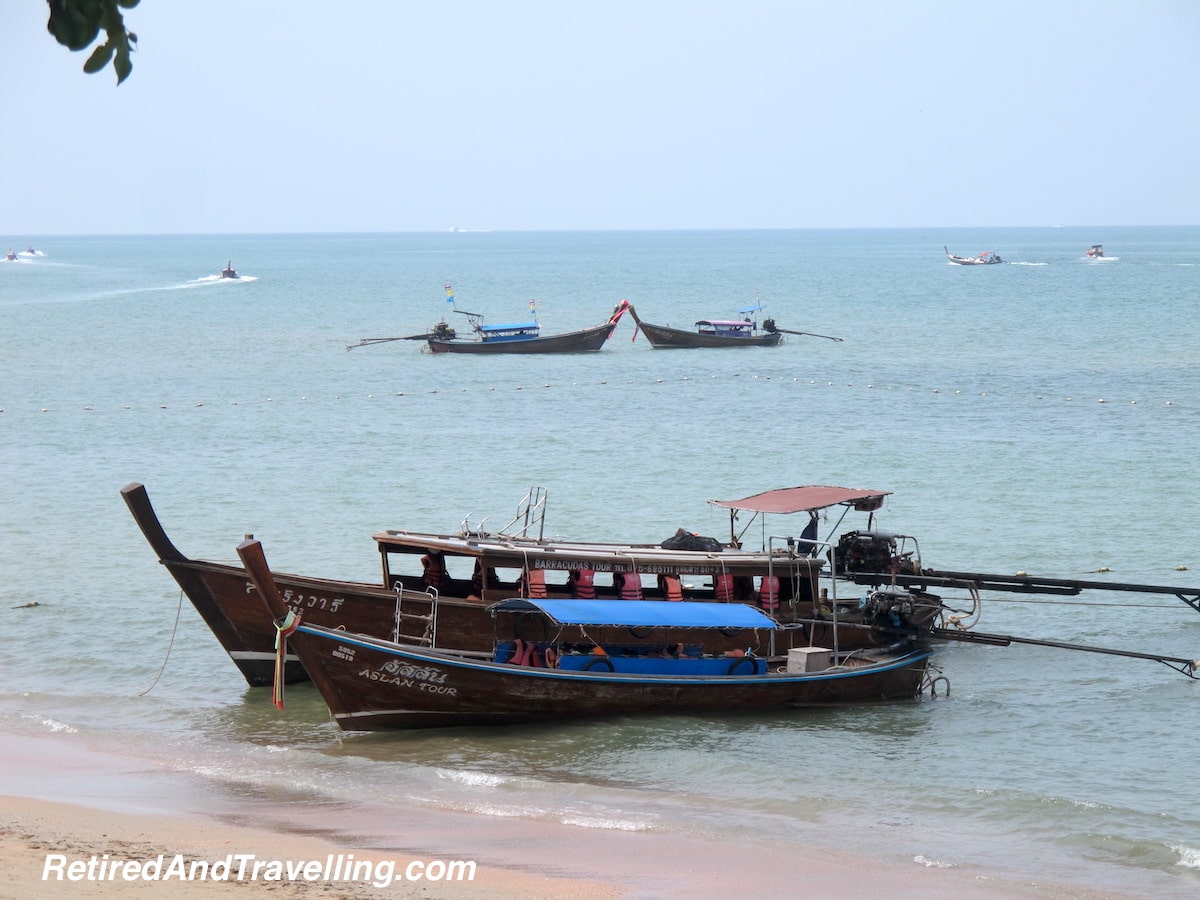 A favourite day trip will take you by long-tail boat to Tonsai or Railay Beach. You will find great sand beaches, lots of beach bars and get awesome views of the limestone cliffs. 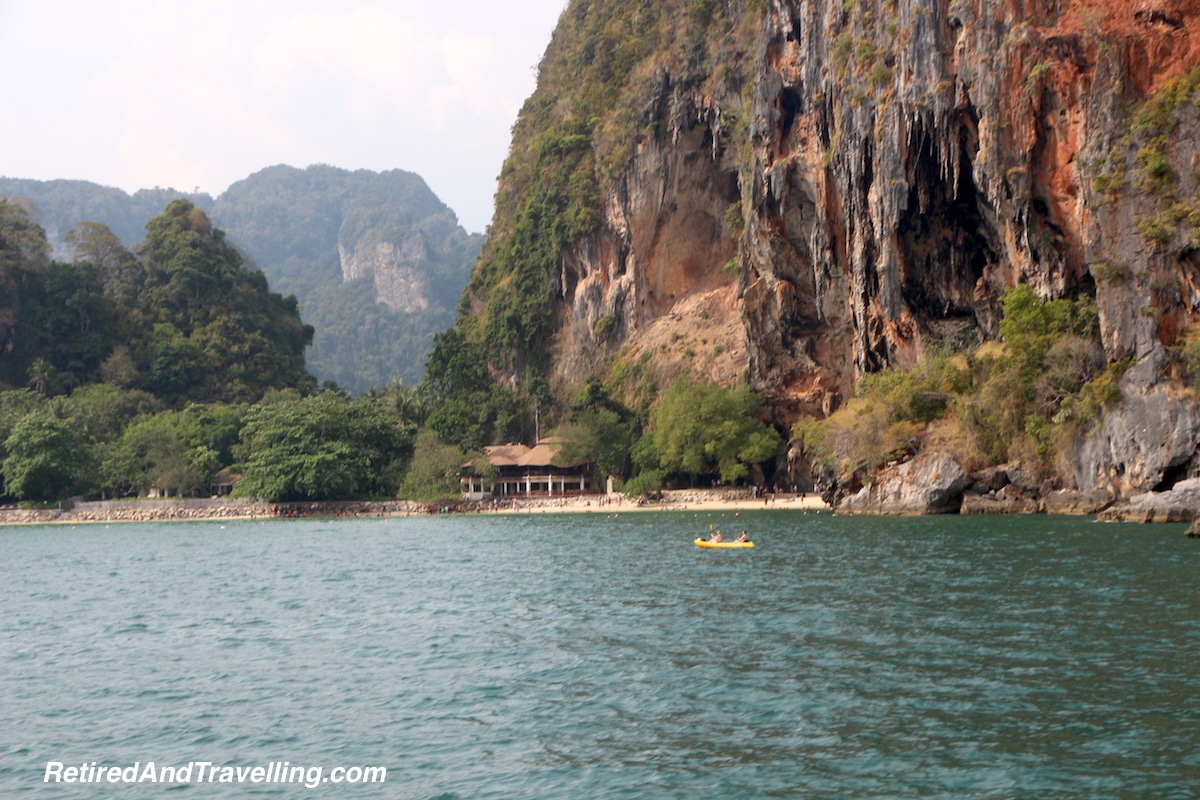 Walking along the beach road you could find a variety of different restaurants and stores. Don’t miss the fried ice cream! 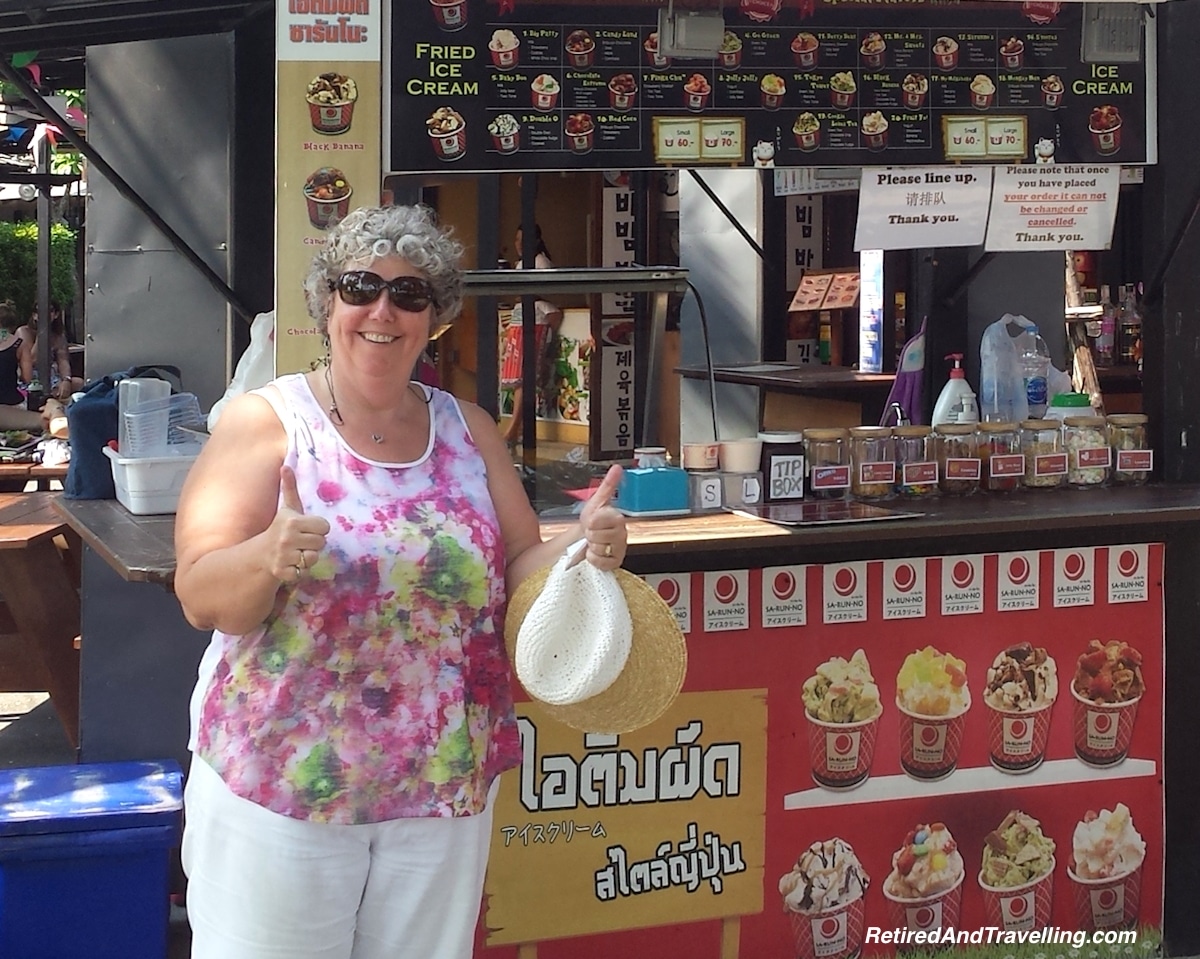 There were a wide variety of tours that could be booked to sites around the Krabi beaches area. Some of the tours were land based but there were also a large number that could be found by boat.

Our son Nick arrived in Krabi while we were still there. He visited us in our luxury suite with his travelling buddy Matt. They enjoyed sipping their beers as they sat in our personal pool. 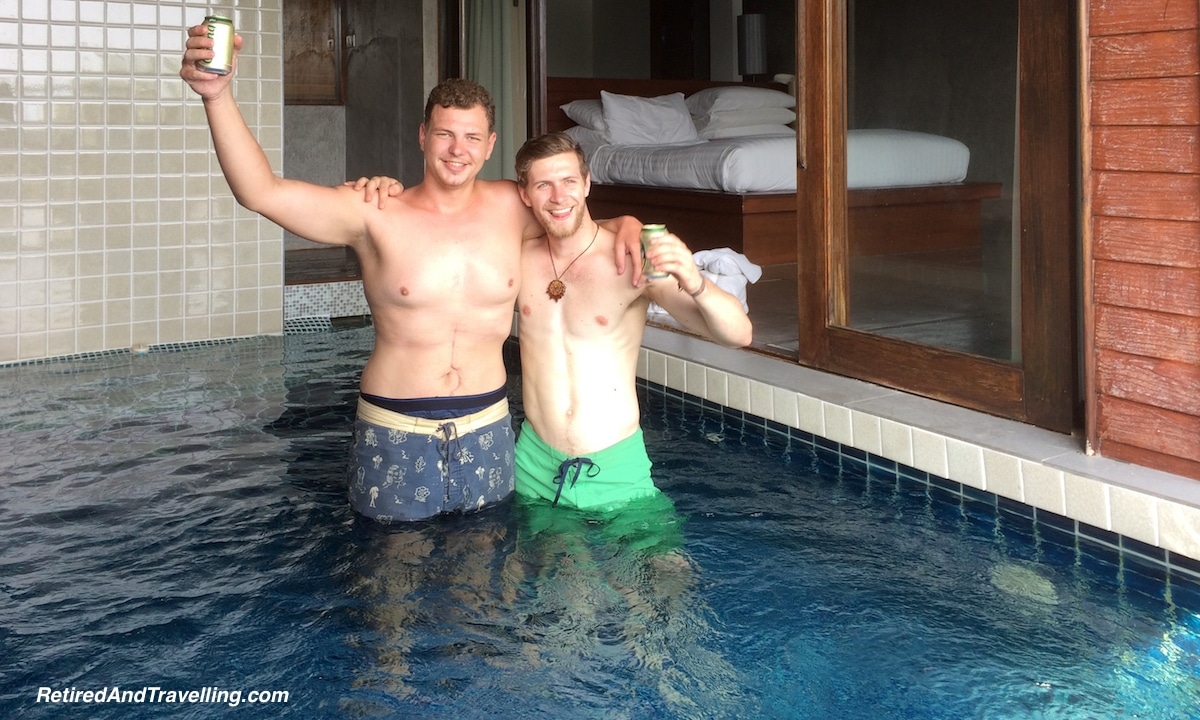 They took one day to laze with us before heading off to continue their much more adventurous exploration of Thailand. We waved goodbye as they headed off in their scooters. They would see the things we had missed! 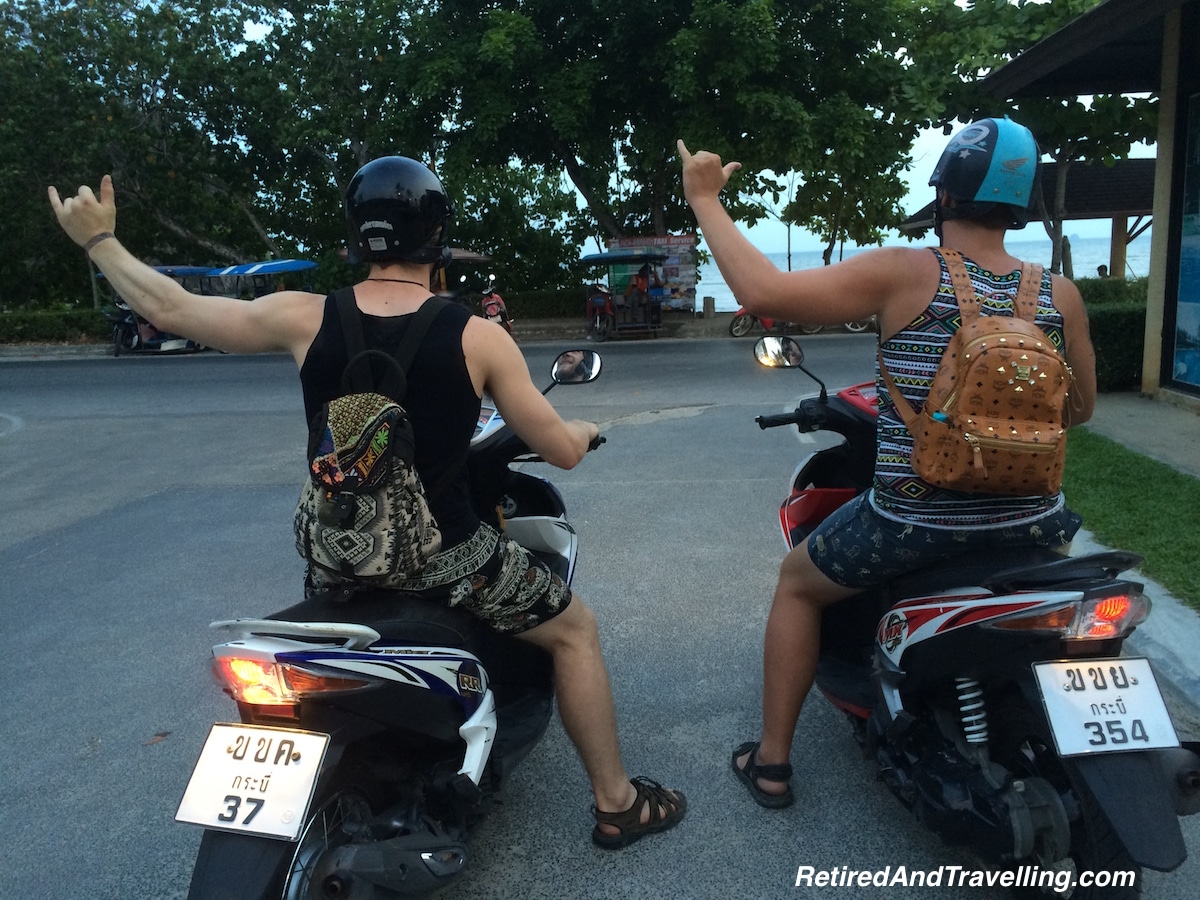 When we were ready to leave we headed to the small port right in Ao Nang Beach. We could catch the Phuket Ferry there and about 2 hours later arrive in Phuket.

We figured this would be a much more interesting way to make the transit. The locals tend to use the bus when they travel between the Krabi beaches and Phuket. Flying seemed like it would take so much longer. 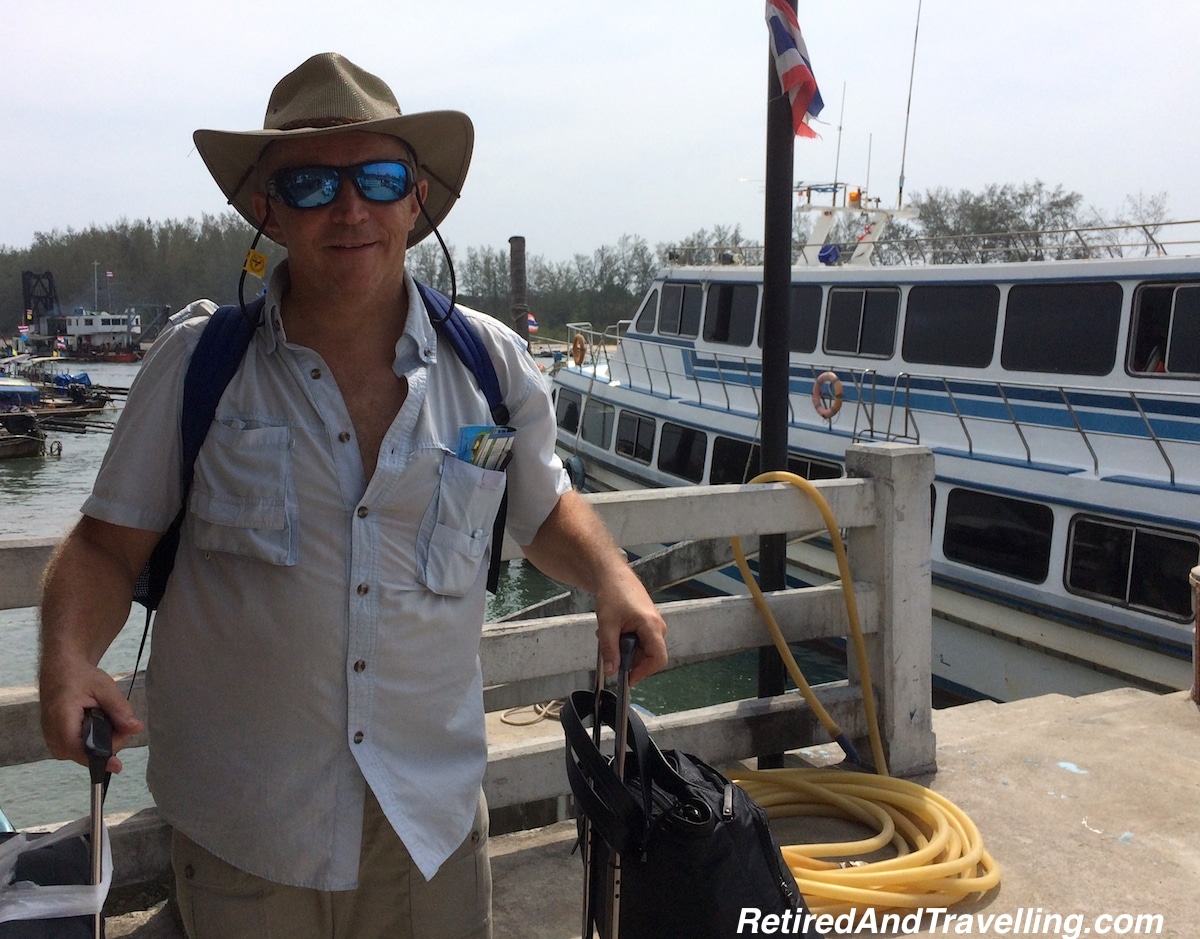 The ferry was a simple “bus” but it did have air conditioning, a toilet and deck room for luggage. There was a mix of people using the ferry for day trips or for transit between destination points. The ferry stopped at both Railay West and East beaches. Since there is no real dock at either spot, the passengers were moved to the ferry either in long-tail boats or a small cruiser. 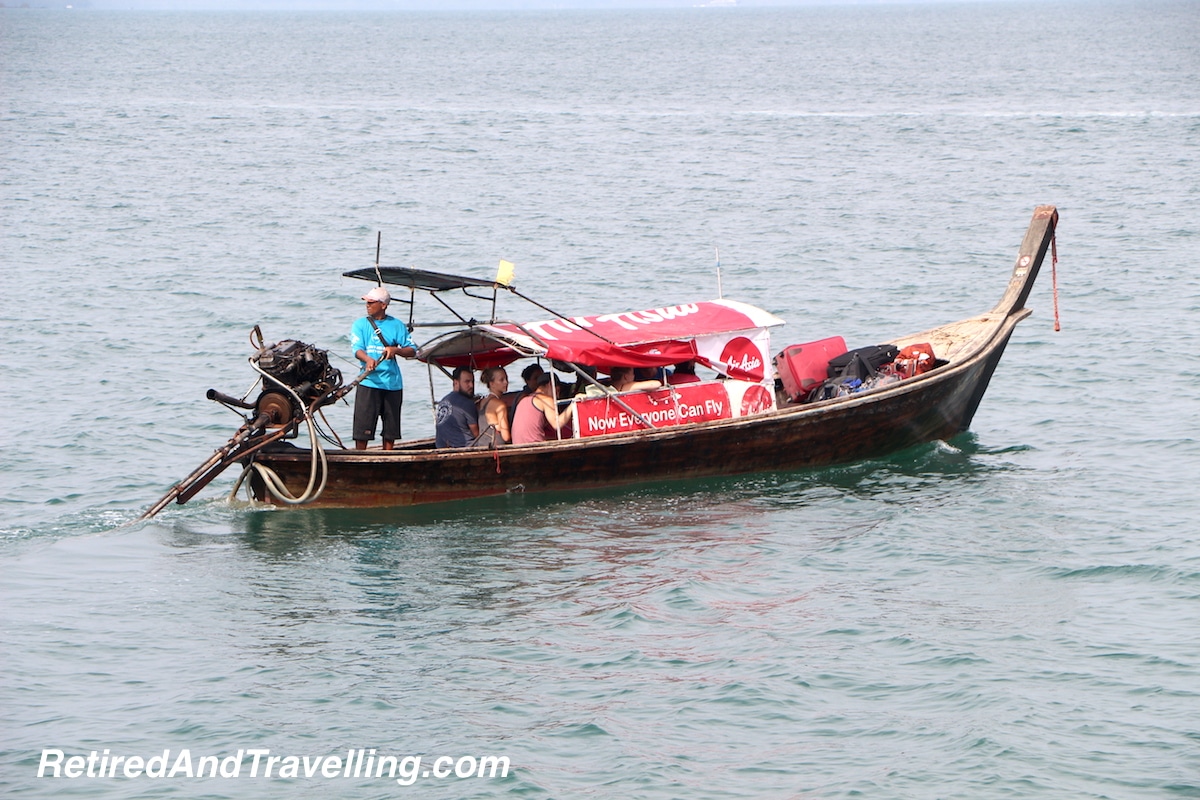 Once everyone was loaded we began the slow crossing of the channel. David had checked the marine weather in advance and found flat seas projected. I am not sure I would really want to be on that ferry in bad sea weather.

Leaving Railay Beach we cruised close to a few other islands before we headed out. We would not see anything very interesting until the land at Phuket started to show up.

It was clear that Phuket would be a much more populated area. We could see multi-storied buildings along the shore. It was a busy port with a wide assortment of new, old, commercial and recreational boats. 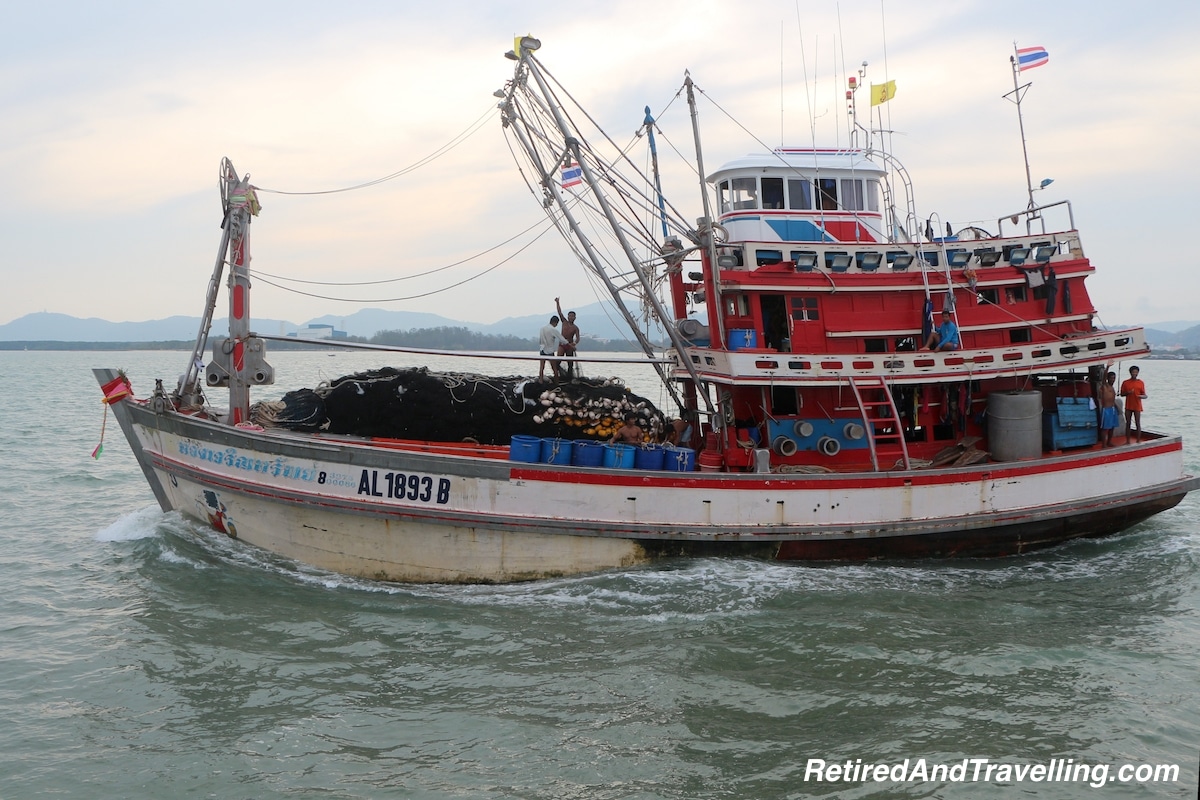 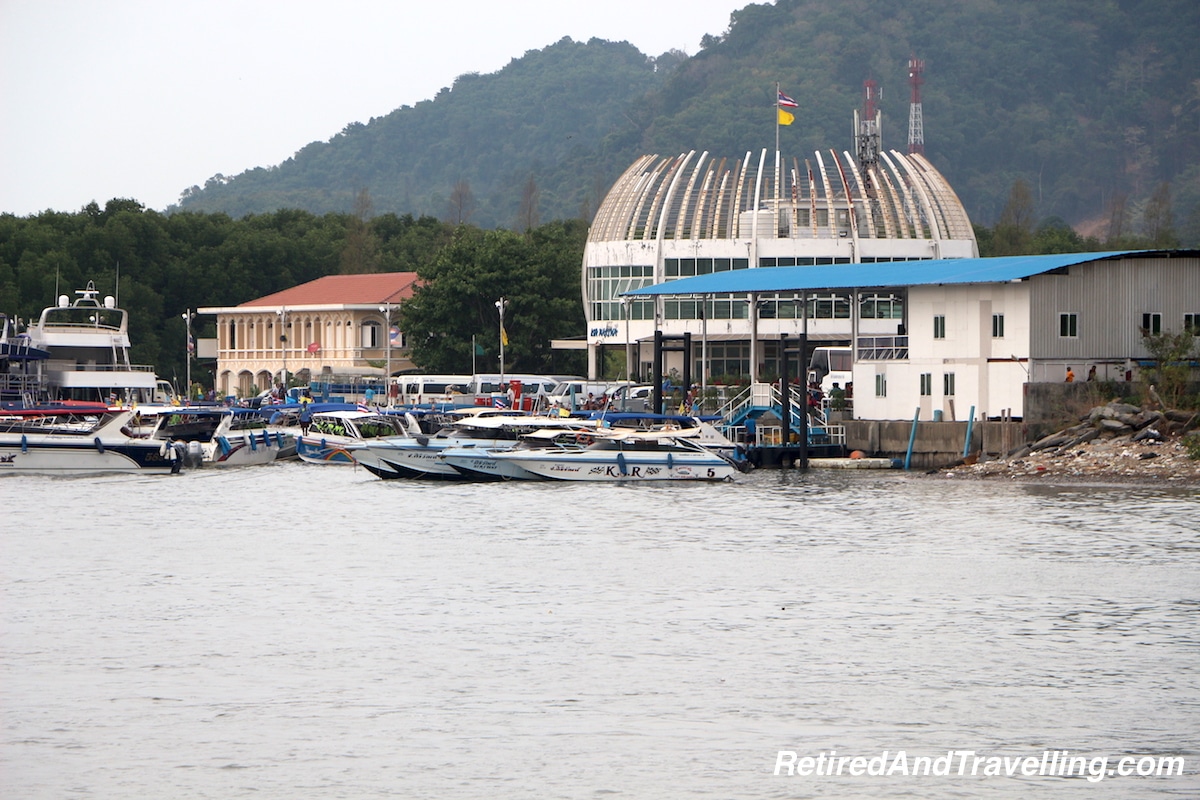 While the town may have been bigger than Ao Nang, the dock landing felt much like we were still in a small backwater. The ferry tied up beside two other boats moored at the dock. The passengers then had to carry their luggage from boat to boat to get to dock. Not exactly a major port!

We had pre-booked our taxi from the ferry dock at Rassada Pier to Patong Beach. We really did not want to be haggling for a ride across the island. As we hit the exit, we could see the taxi driver holding a card with our name on it. We were on our way to Patong Beach in Phuket for 2 days!

A Great Week On The Krabi Beaches

It had been a lazy week on the Krabi beaches. We didn’t see as much as we wanted to. But we did learn how easy it was to move about Thailand . And the great variety of tourist things that were available in the Krabi beaches area. We would look forward to exploring more the next time we were in Thailand.

Did you visit the Krabi beaches? Did you stay in the area or did you come in for a day visit? What was your favourite day trip from Krabi? 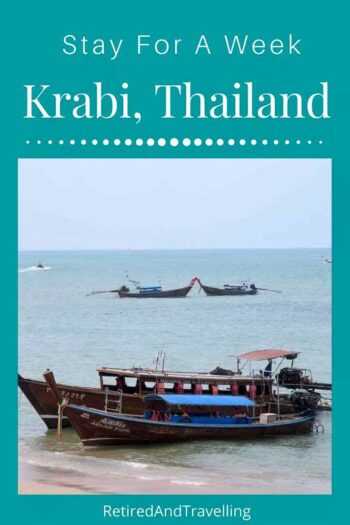 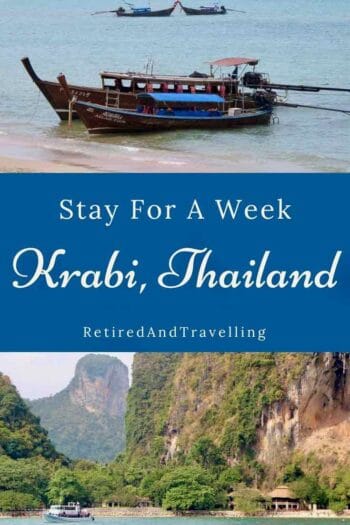