The Road To Explore Jerusalem

On our first day in Israel we visited Masada and the Dead Sea. As we travelled along the smaller roads in the Jordon Rift, we passed several signs pointing to Jerusalem. On our second day, we set off to explore Jerusalem. This trip we stuck mostly to the highways.

Travelling along, we still stopped several times for checkpoints. The “life saving separation fence” ran along the road in many places. Behind the fence we saw Palestinian settlements high in the hills. The political situation was in a quiet period. The barbed wire and machine gun manned checkpoints remind you how fragile peace is. 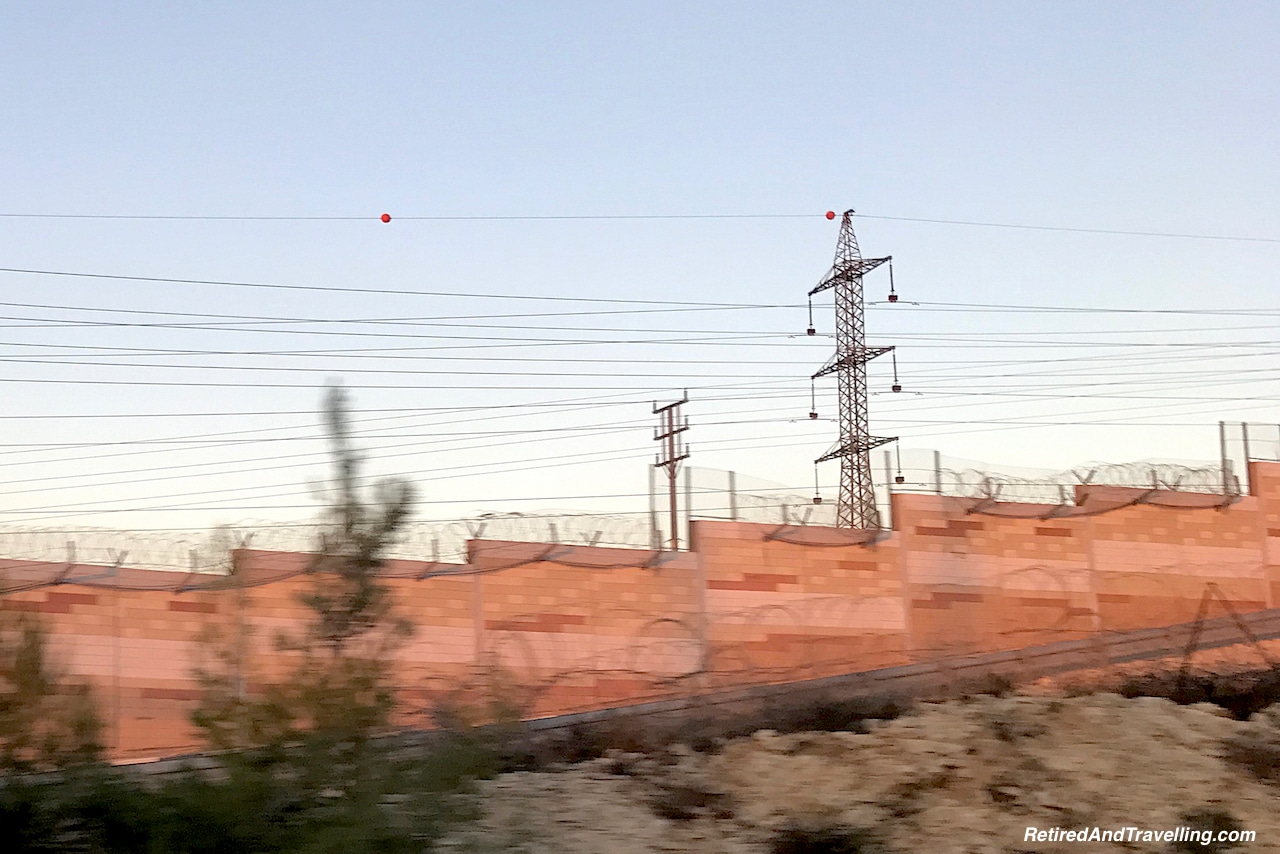 Our rest stop was at a gas station celebrating Elvis. There were statues everywhere. Even the bathrooms were decorated with Elvis faces. Maybe that was the entertainment you got for the $1 paid for 2 people to use the bathroom. We were an early bus into the stop but when we came out, the queue was up the stairs and out the front door. They were printing money. An unusual start to our visit to explore Jerusalem. 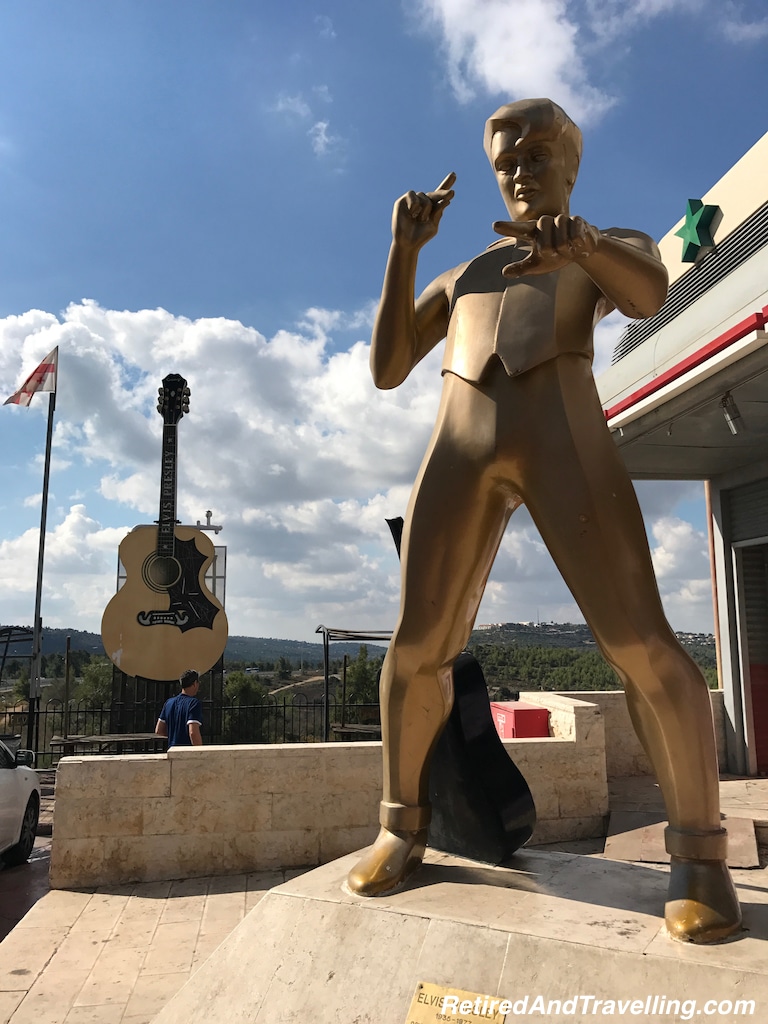 Jerusalem is the Religious Centre

Jerusalem is the holiest city in Judaism, contains a number of significant ancient Christian sites and is considered the third holiest city in Islam. It contains key sites of religious significance – Temple Mount, the Western Wall, Church of the Holy Sepulchre, Dome of the Rock and al-Aqsa Mosque. The old walled city is divided into 4 quarters – the Armenian, Christian, Jewish and Muslim sectors. Our guide hustled us through much of this as we walked to explore Jerusalem.

The old city is located high above the surrounding valleys and dry riverbeds at 2,500 feet high. Our first stop was at Mt Olives with a panoramic view over Jerusalem. It seemed fitting that the tour groups would hear the call for prayer as we stood on the mountain. The gold reflections from the Dome of the Rock shone in the early morning sunshine. 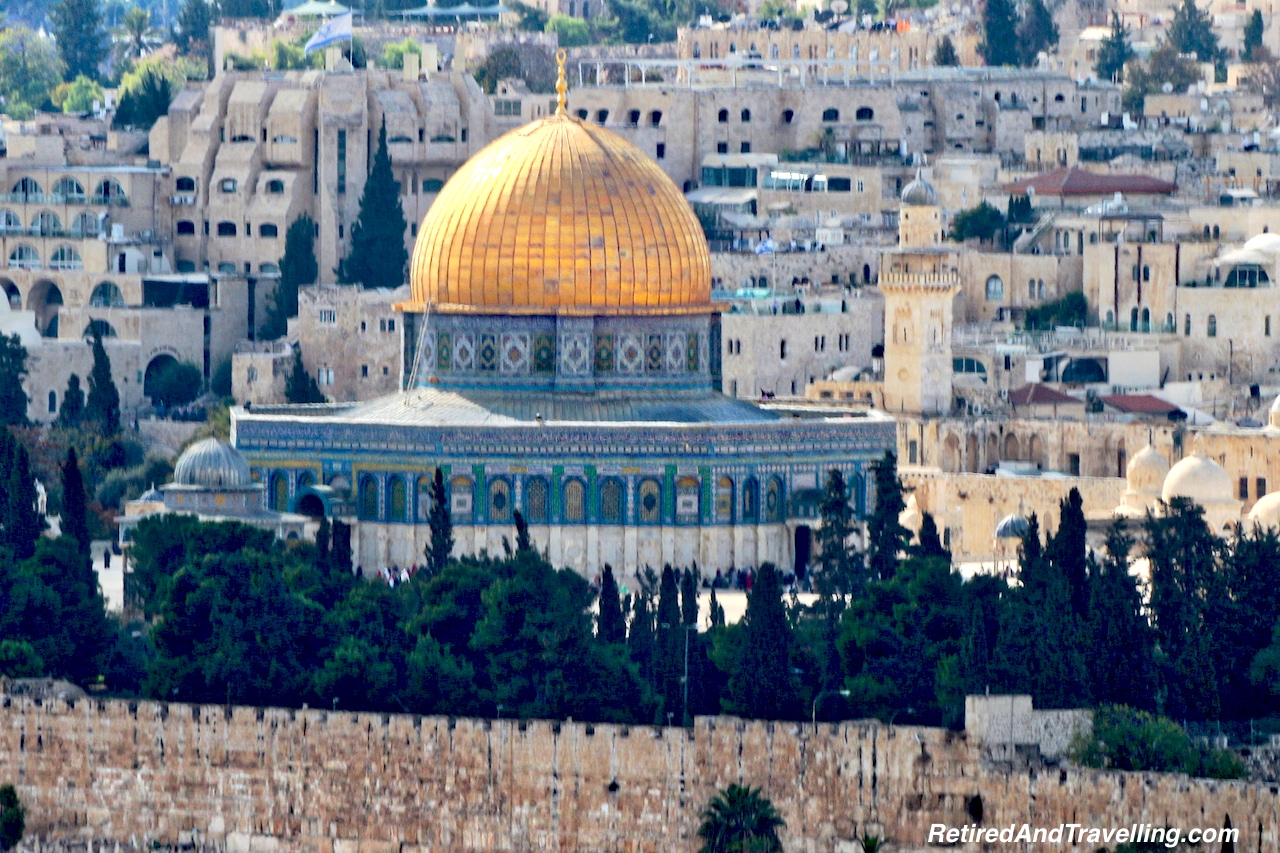 Our guide travelled with a trumpet. Many times he used this to call us to order. On top of Mt Olive he played us a soulful rendition of “Hallelujah”. When he was done he had someone read section 122 from the Book of Psalms. We had a moment to pause and reflect. 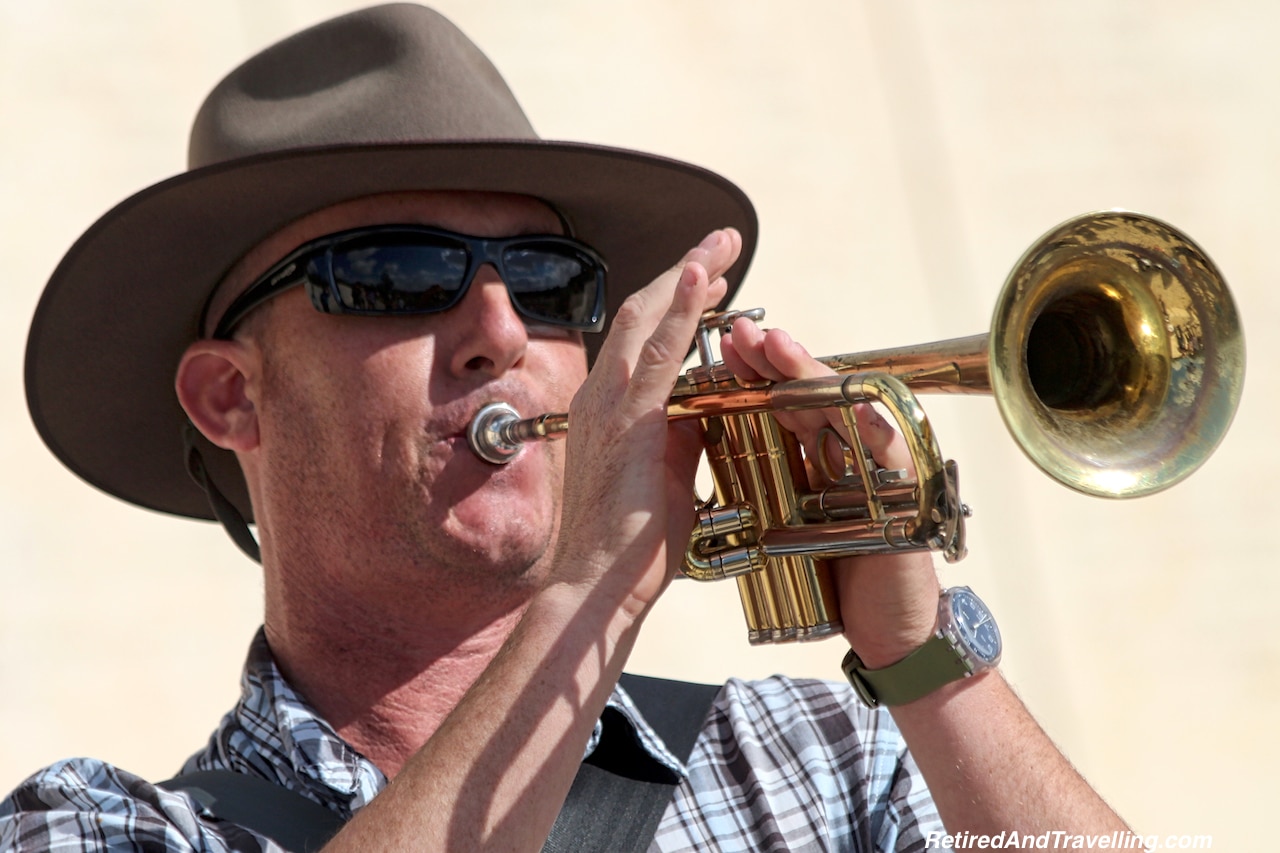 Starting in the Christian Quarter

We entered the walled old city to explore Jerusalem at the Tower of David. Our walk began through the narrow alleys of the Christian quarter. 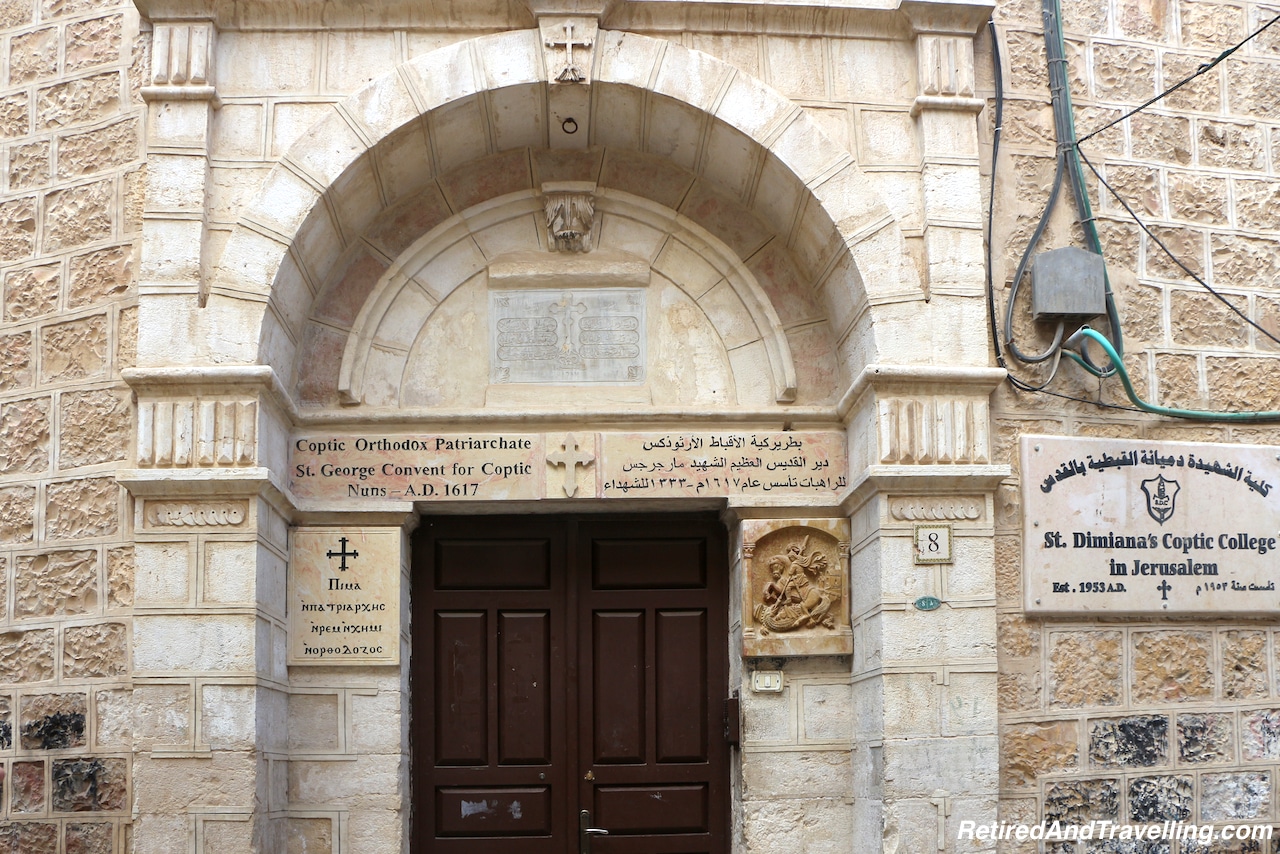 The first stop was at The Church of the Holy Sepulchre. This church is the site where Jesus was both crucified and buried. Archeologists and historians agree that this church was the actual site. Many of the other stations of the cross within Jerusalem are deemed to be less authentic. The church is located about 2,300 feet west of the Dome of the Rock. 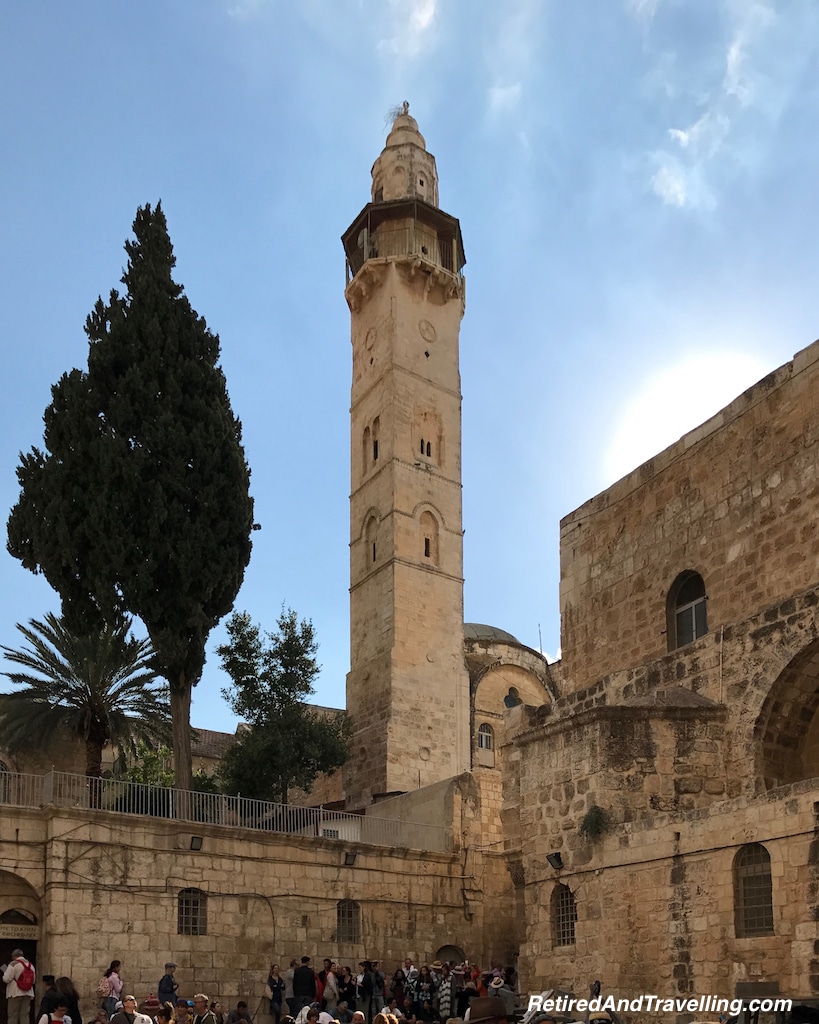 The Most Holy of Sites

Our guide continued to try and get us to our various stops at quiet ebb points. Even at a quieter moment, the Church of the Holy Sepulchre was packed with both tourists and the devout pilgrims. This would be an important stop on our tour to explore Jerusalem. Everyone pushed and trampled for their chance to touch one of the sacred relics. 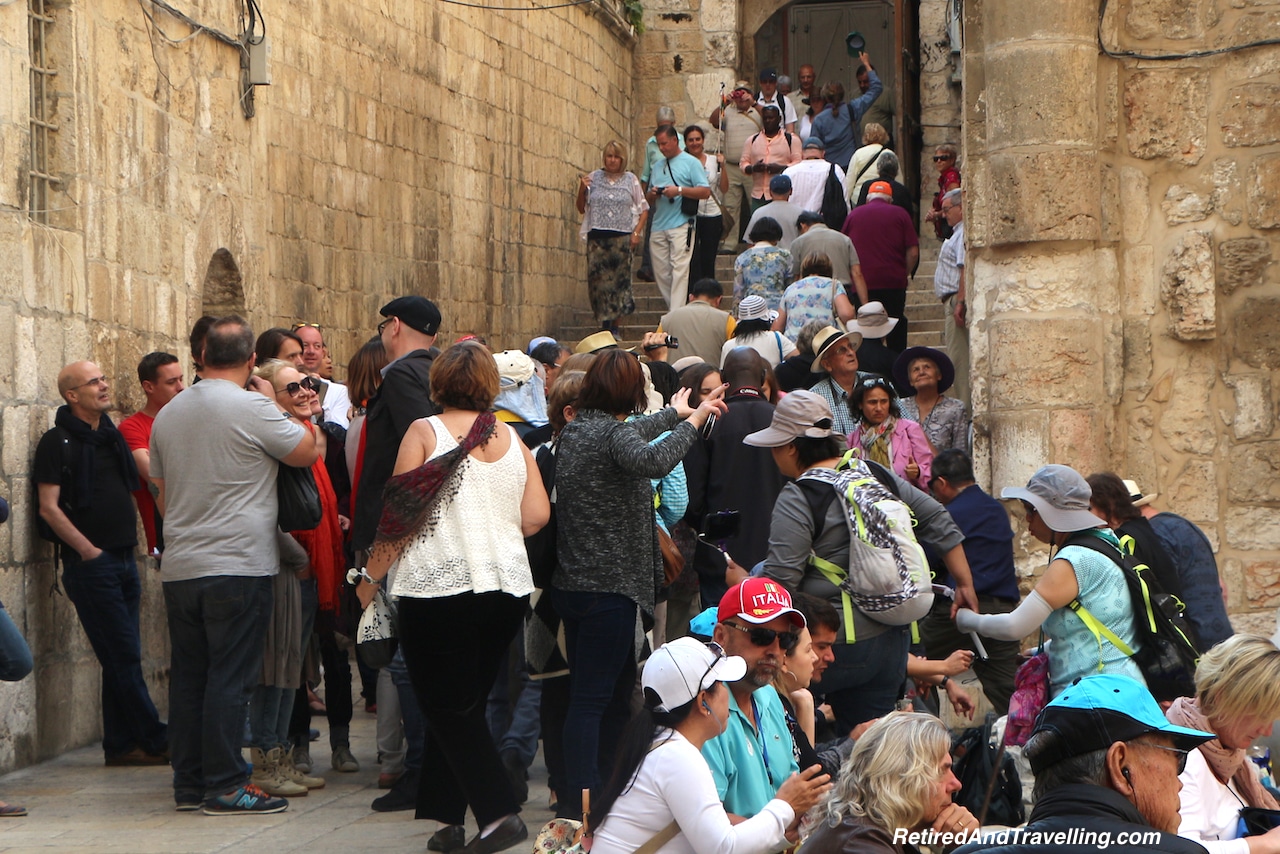 The devout were prostrating themselves and had brought items to place on the Stone of Anointing to soak up the myrrh (the place where Jesus’ body was prepared for burial). We were not quite sure about the woman who put her sunglasses on the stone to be blessed. 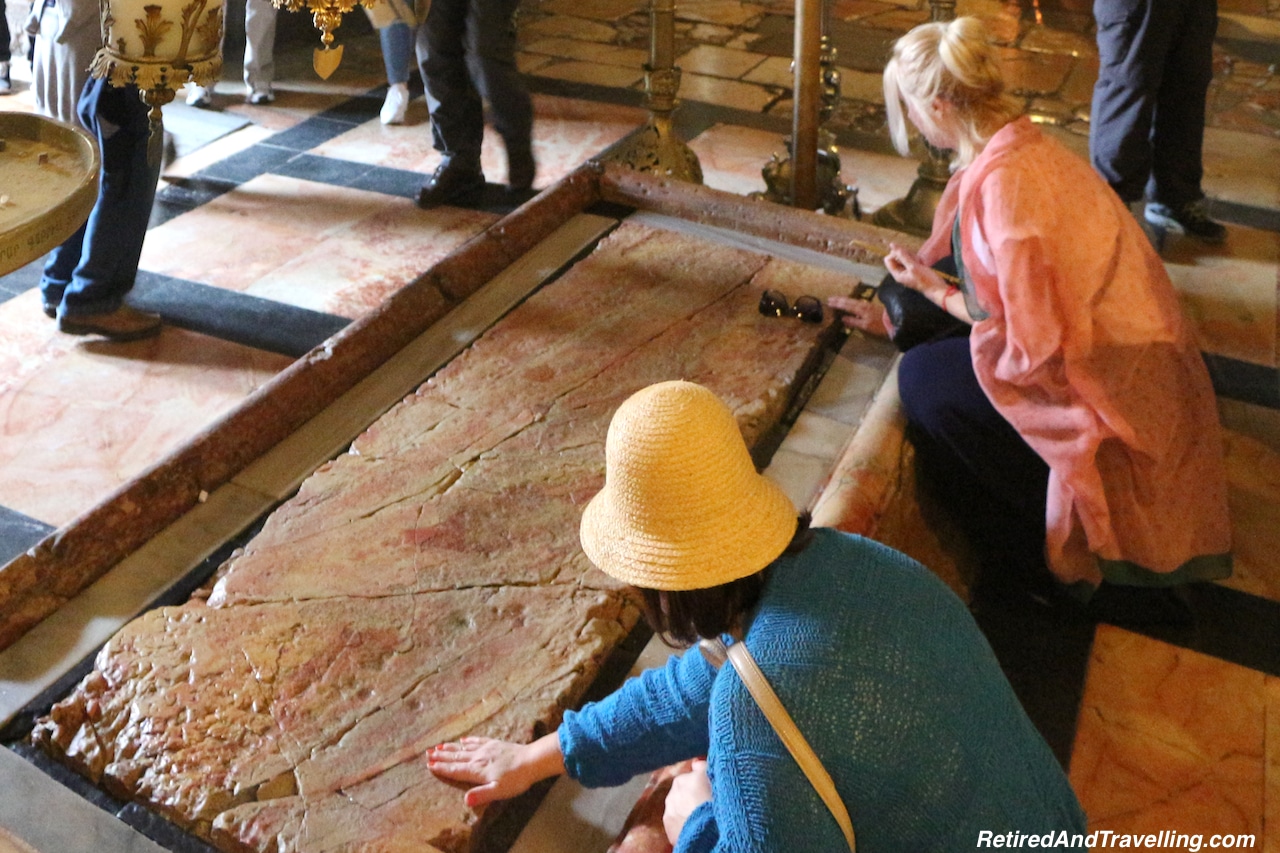 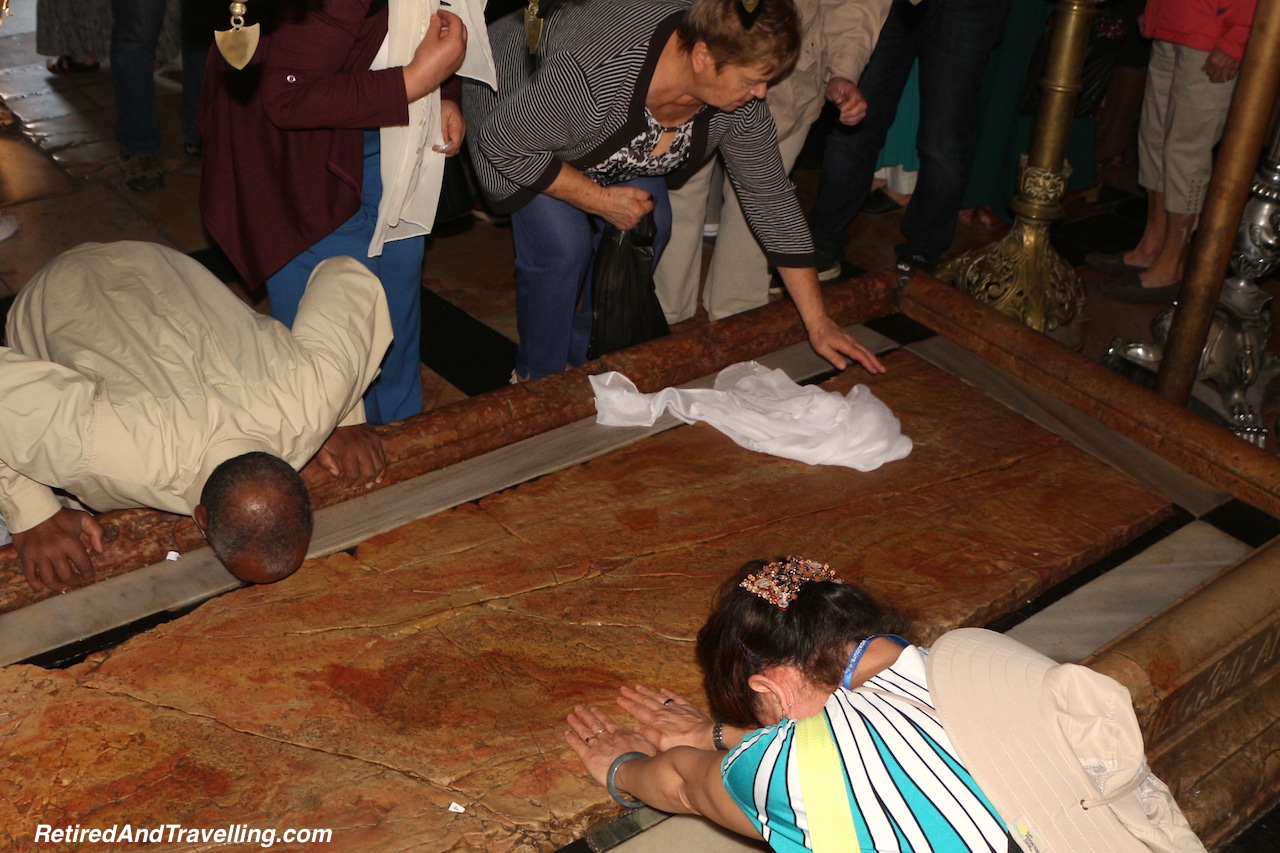 One wall included a complete mosaic that showed various images of Jesus’ final days. The mosaic roof in one part of the chapel reminded me of ancient Byzantine mosaics in the Italian city of Ravenna. 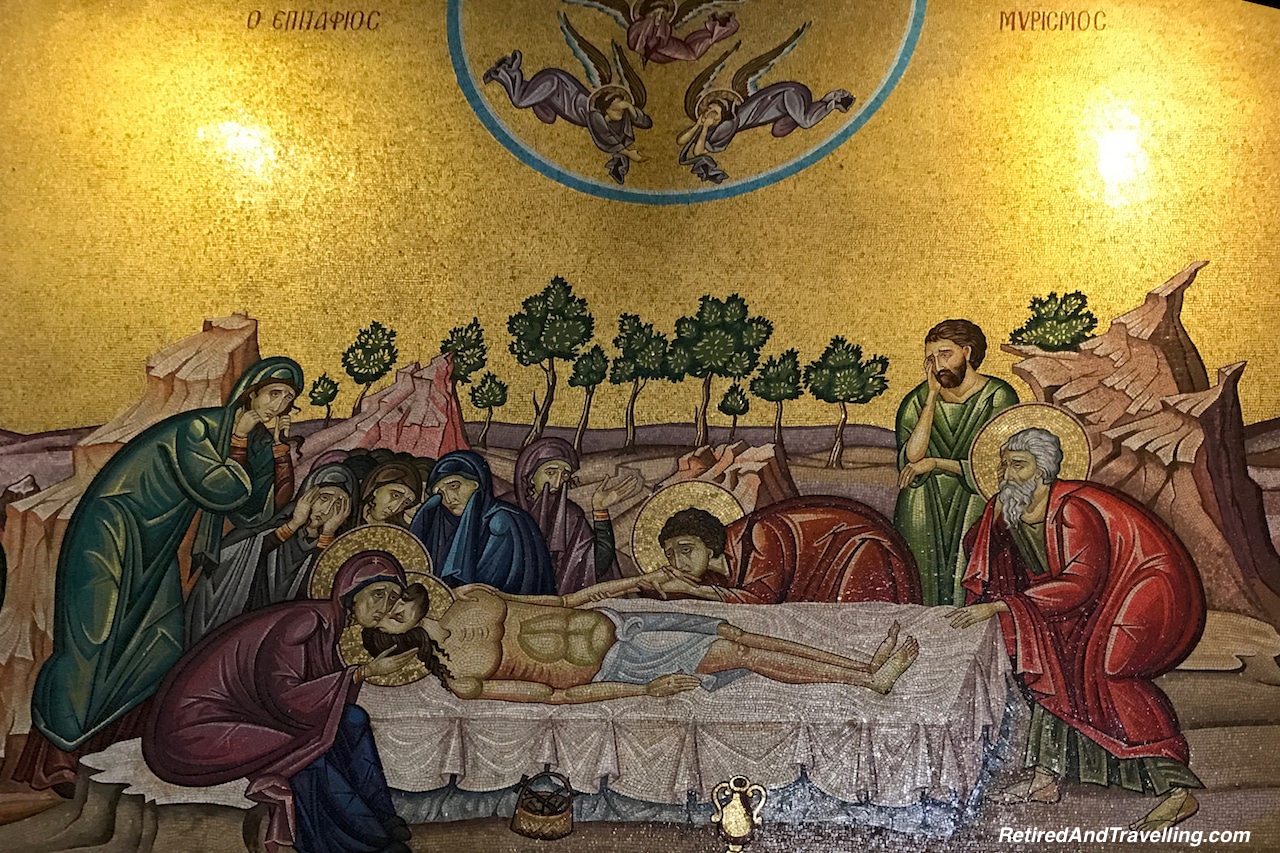 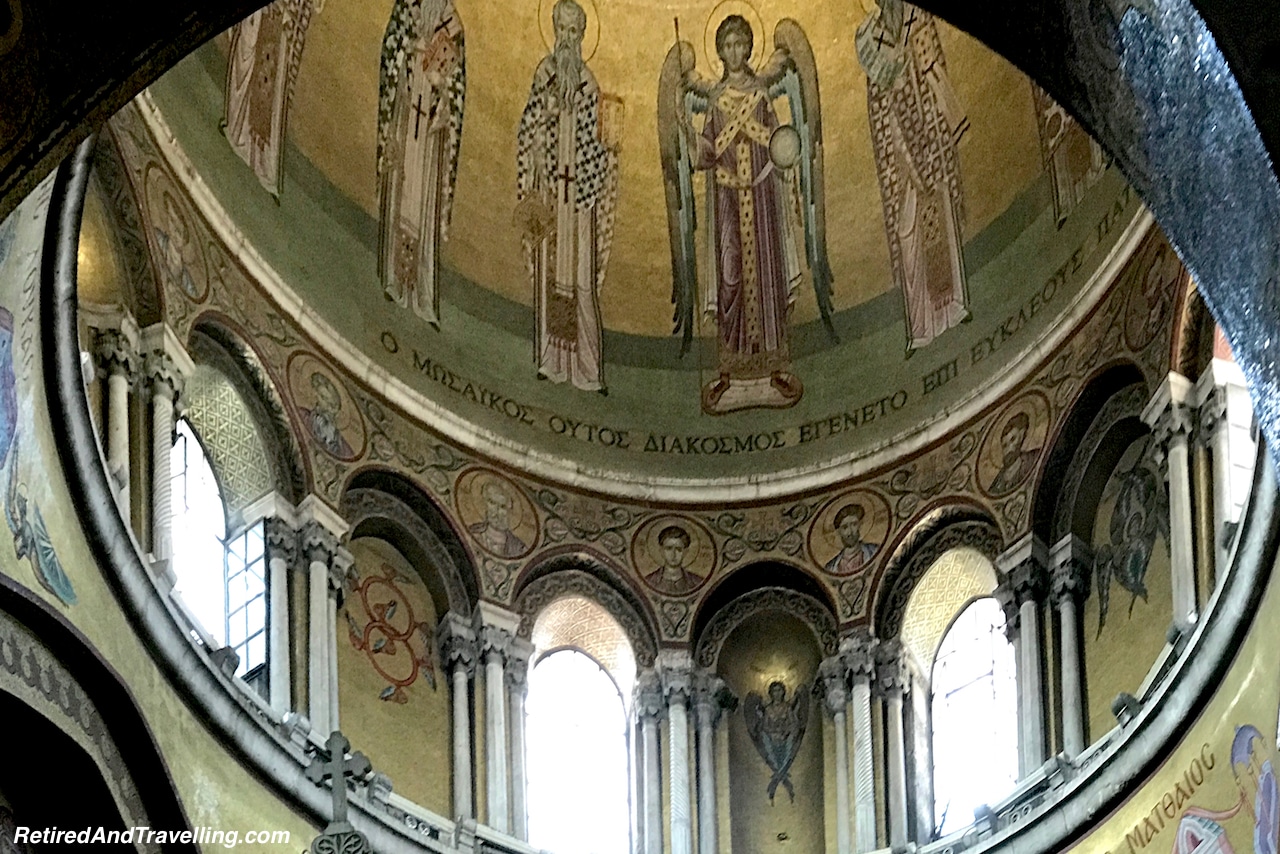 While parts of the church were stark in decoration, other areas were ornate and decorated. The devout lined up to pray at the alter. 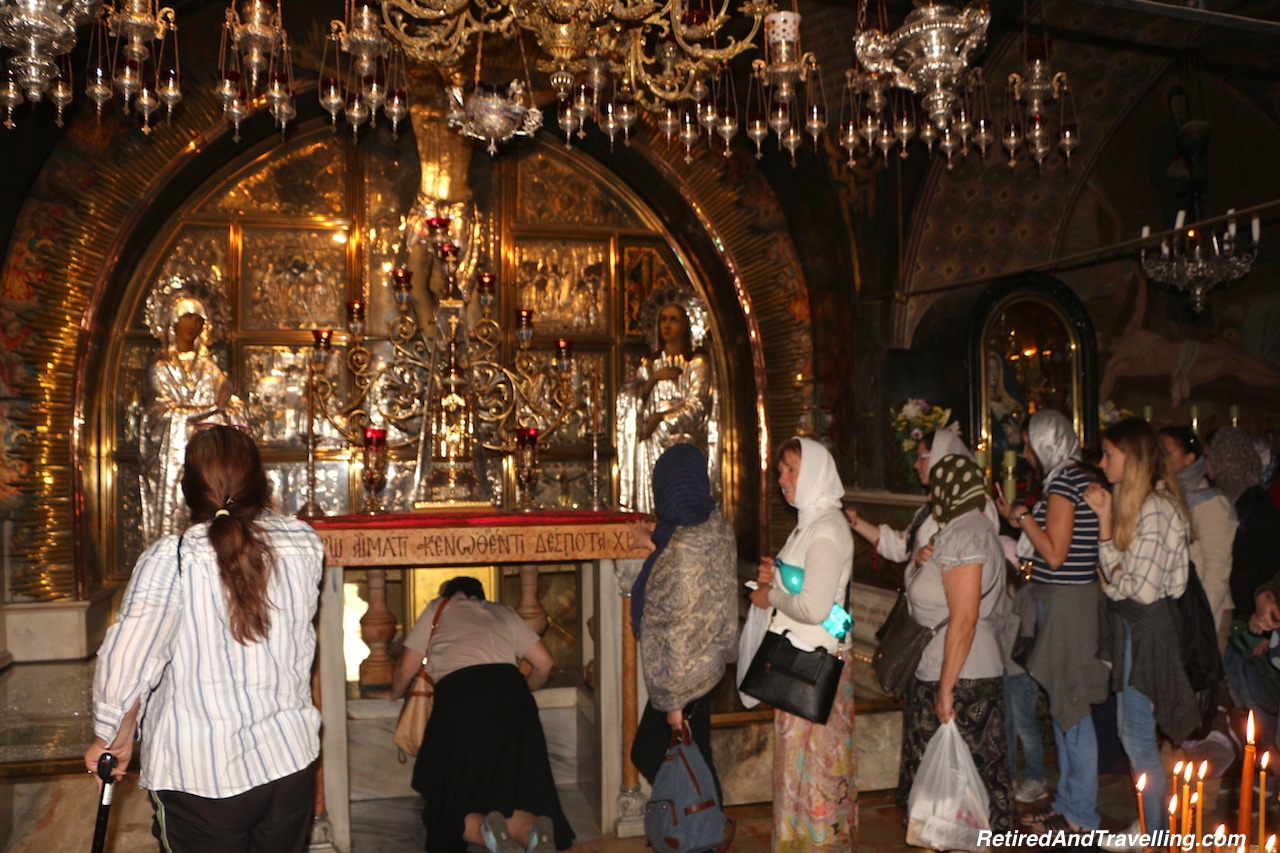 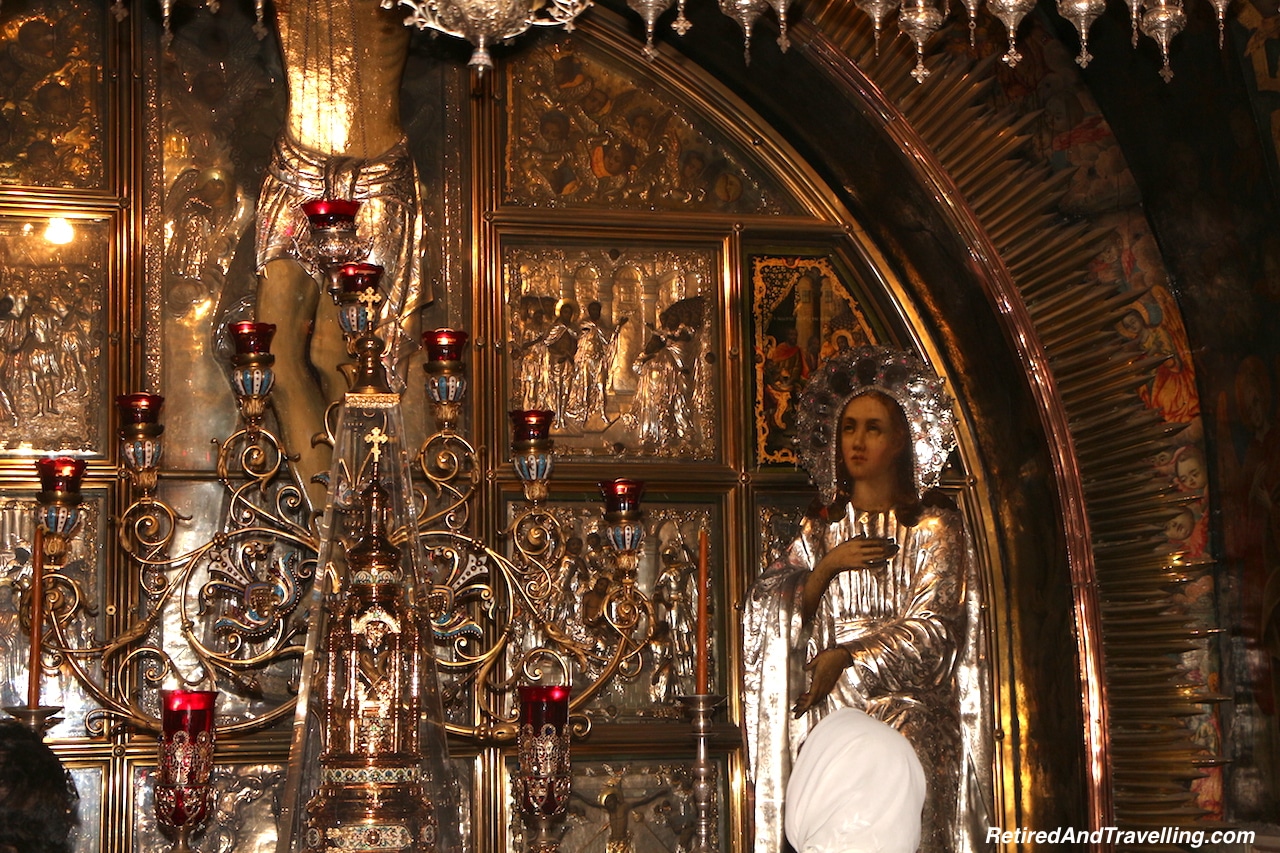 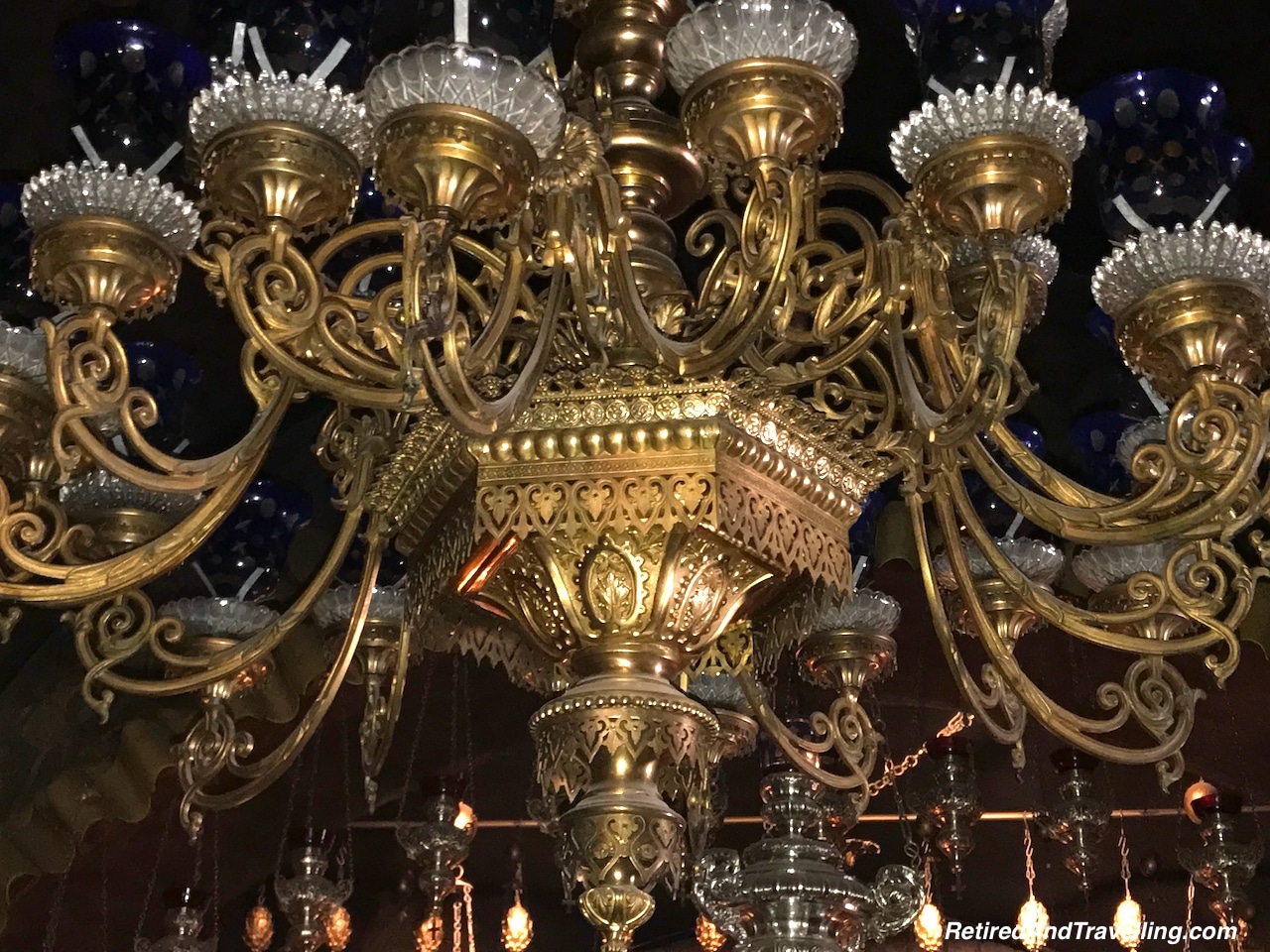 There was a very long line to go in and worship at Jesus’ tomb. Our guide warned that we did not have time to wait in this line. We were given 15 minutes to wander on our own before we would meet him outside.

Following the Stations of the Cross in Jerusalem

We walked on the edge of the Armenian quarter through to the Jewish quarter. Up and down narrow cobblestone alleys, we followed what claimed to be the stations of the cross. These stations of the cross represented the journey of Jesus as he walked to his crucifixtion. The stations were recognized with roman numbers on the side of the walls. 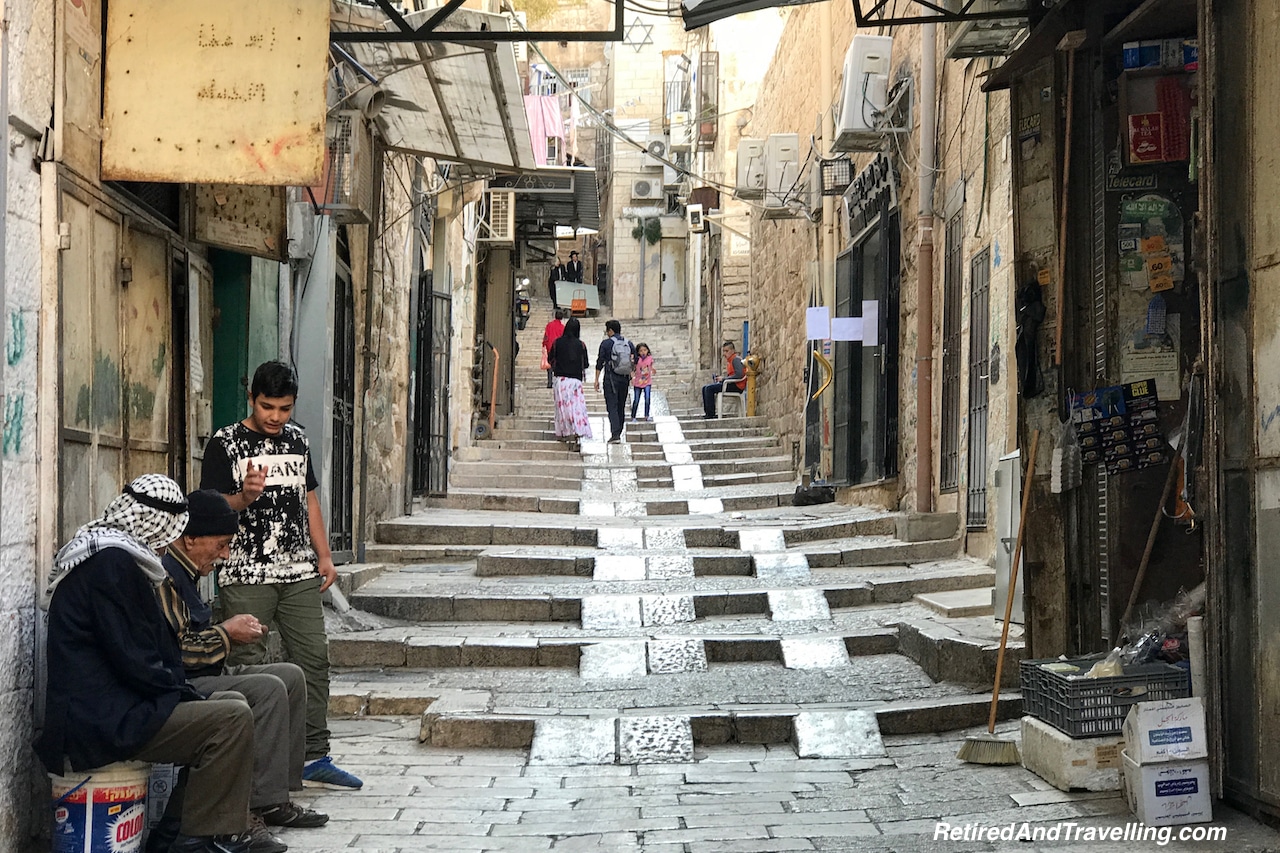 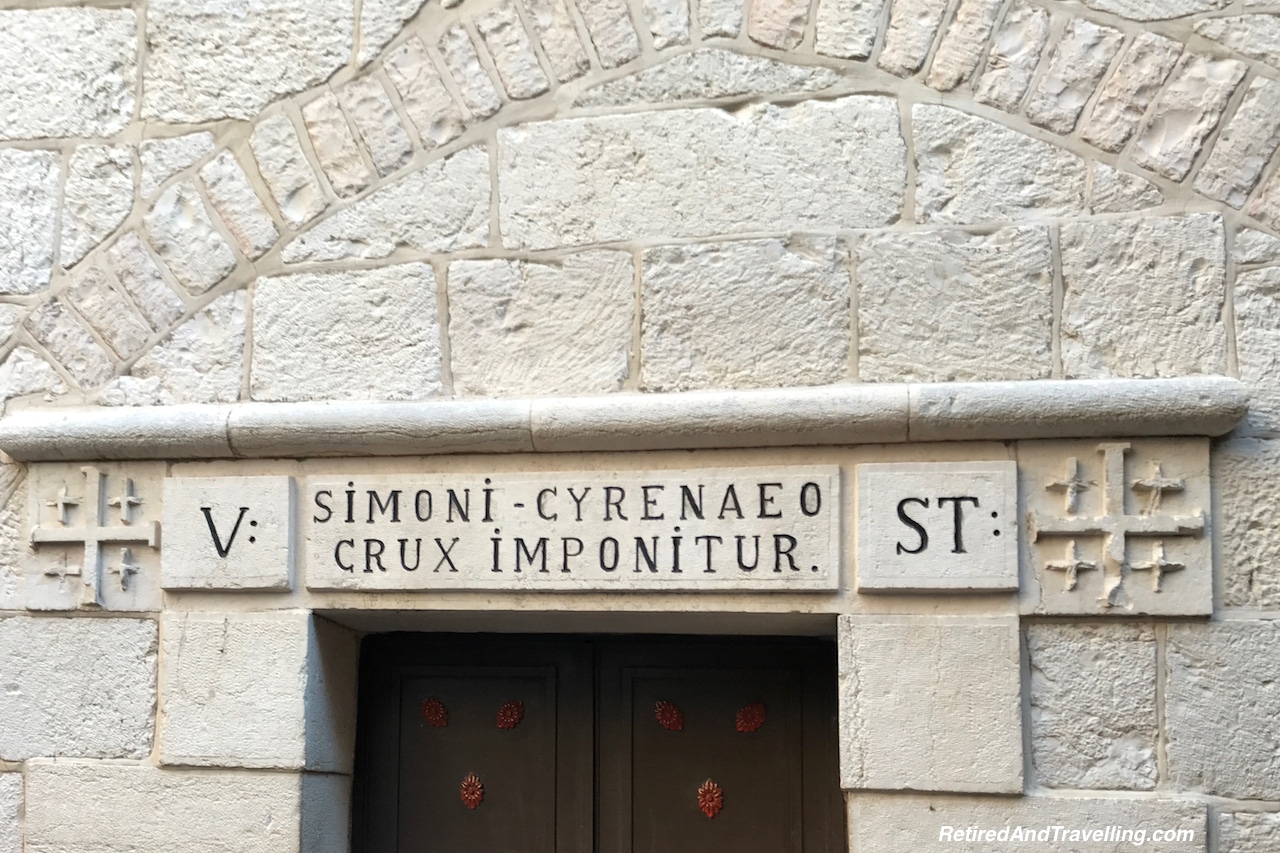 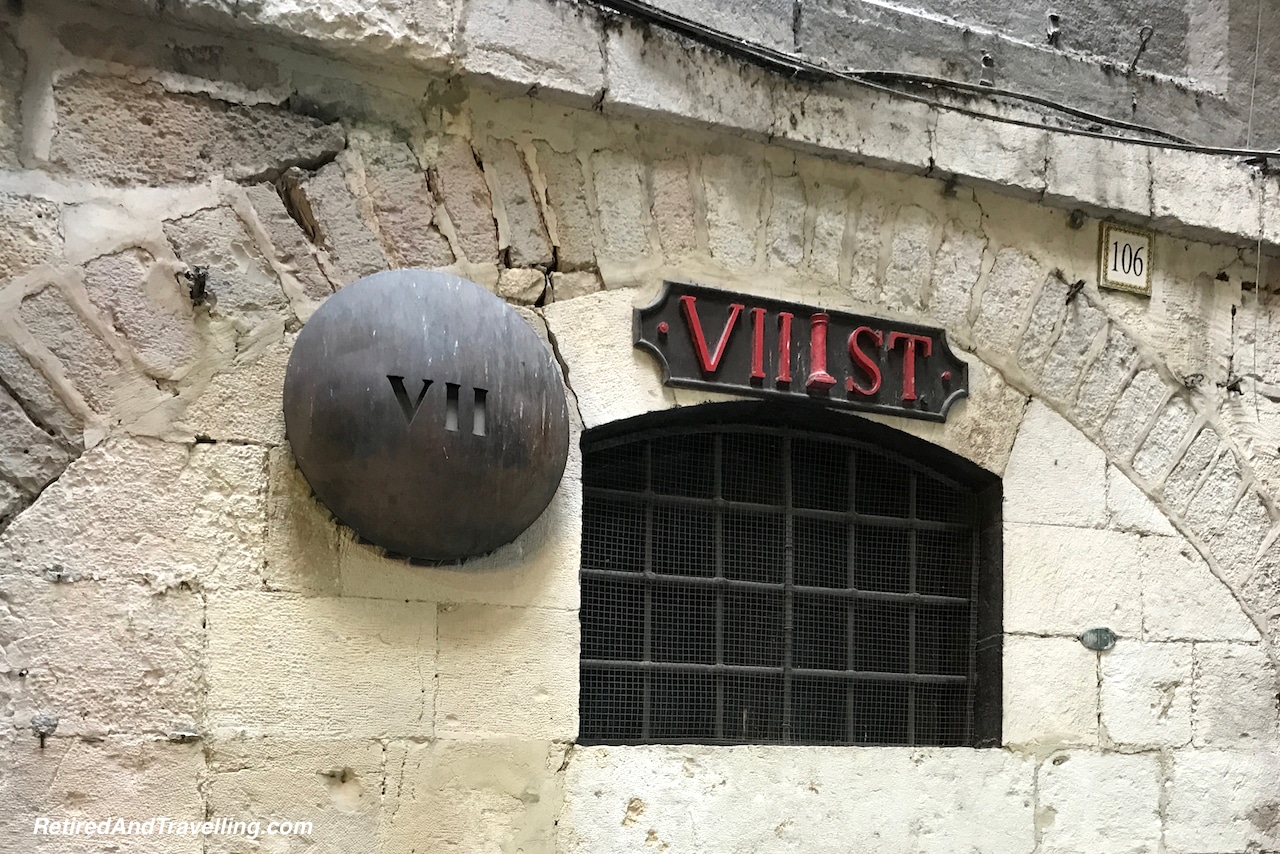 We didn’t see all of the stations of the cross as we set out to explore Jerusalem. But we saw quite a few on our journey.

When the streets got crowded, we watched for pickpockets (“seagulls”). In many places we needed to be firm but polite to fend off the hawkers. With tourism numbers so low in the middle east, everyone was eager to sell you something.

Having been warned about buying from street vendors, our guide stopped at an approved shopping point. It was a bit disconcerting when the store door was closed behind us and we were required to sit through a sales pitch before we could wander around. We must admit to being a bit surprised at the range of things that were stamped with “Jerusalem”. It seemed a bit sacrilegious to use bottle openers as a reminder of this most holy city. 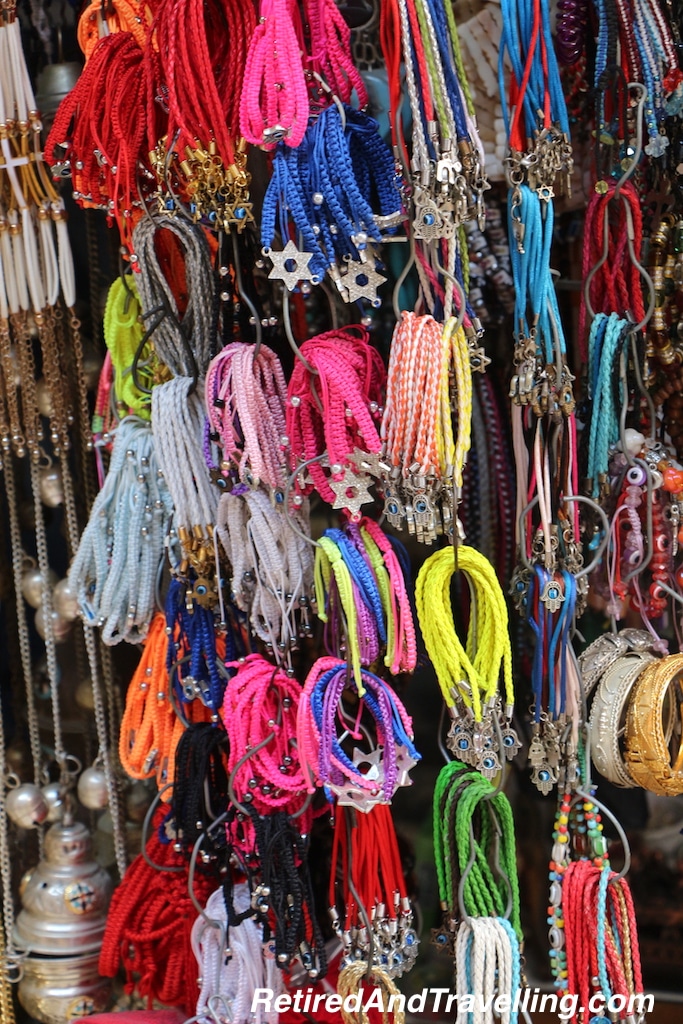 The stores in the alleys sold a wide range of trinkets and local colourful fabrics. As we walked, we saw displays of fruit and spices. There were cafes in caves that looked inviting. 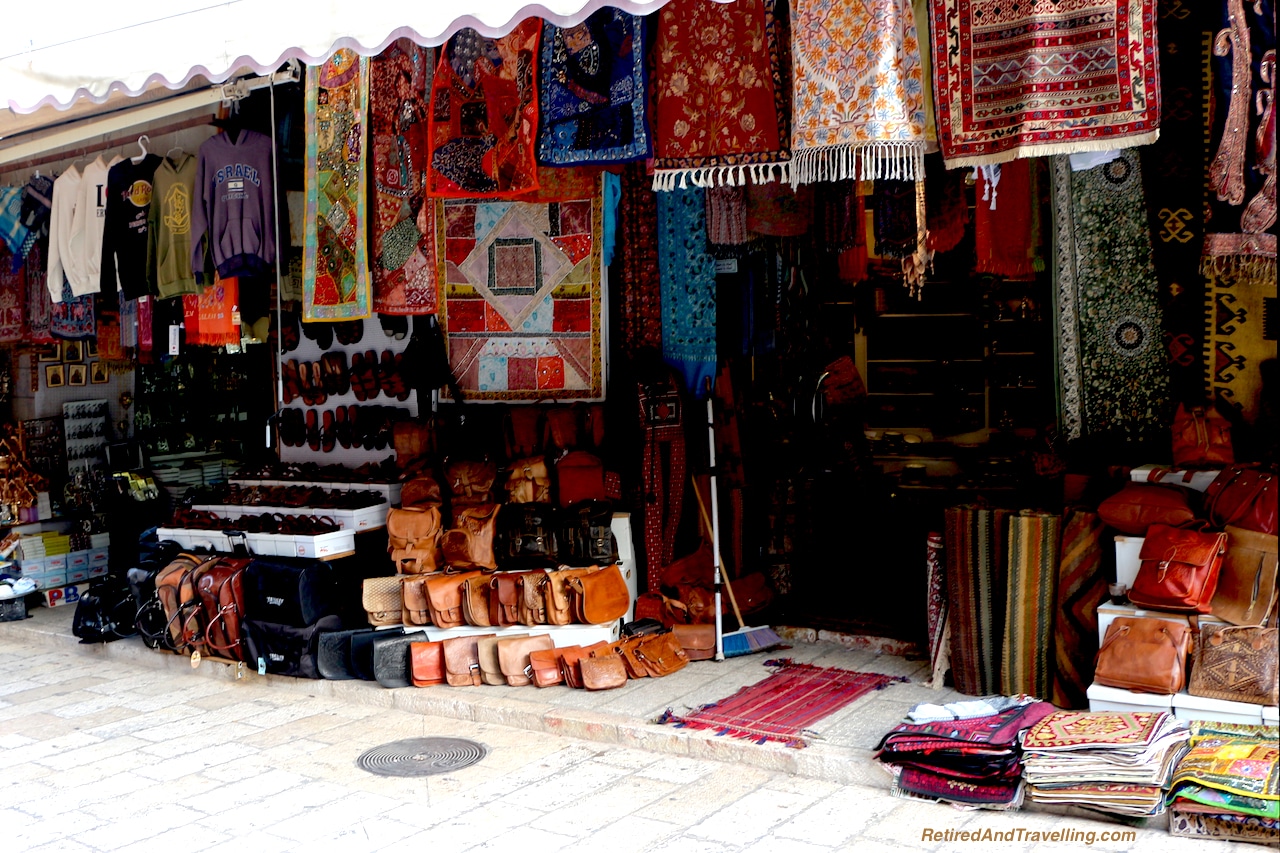 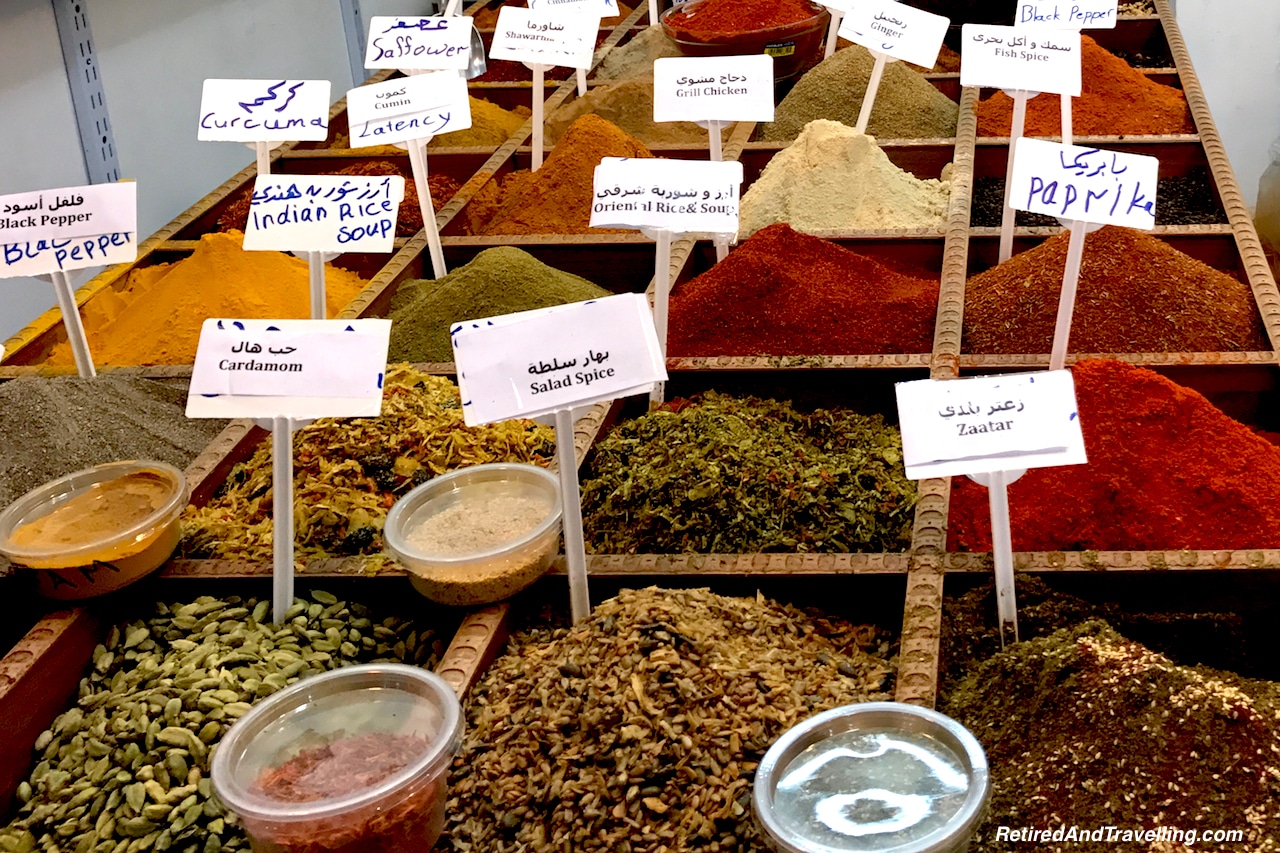 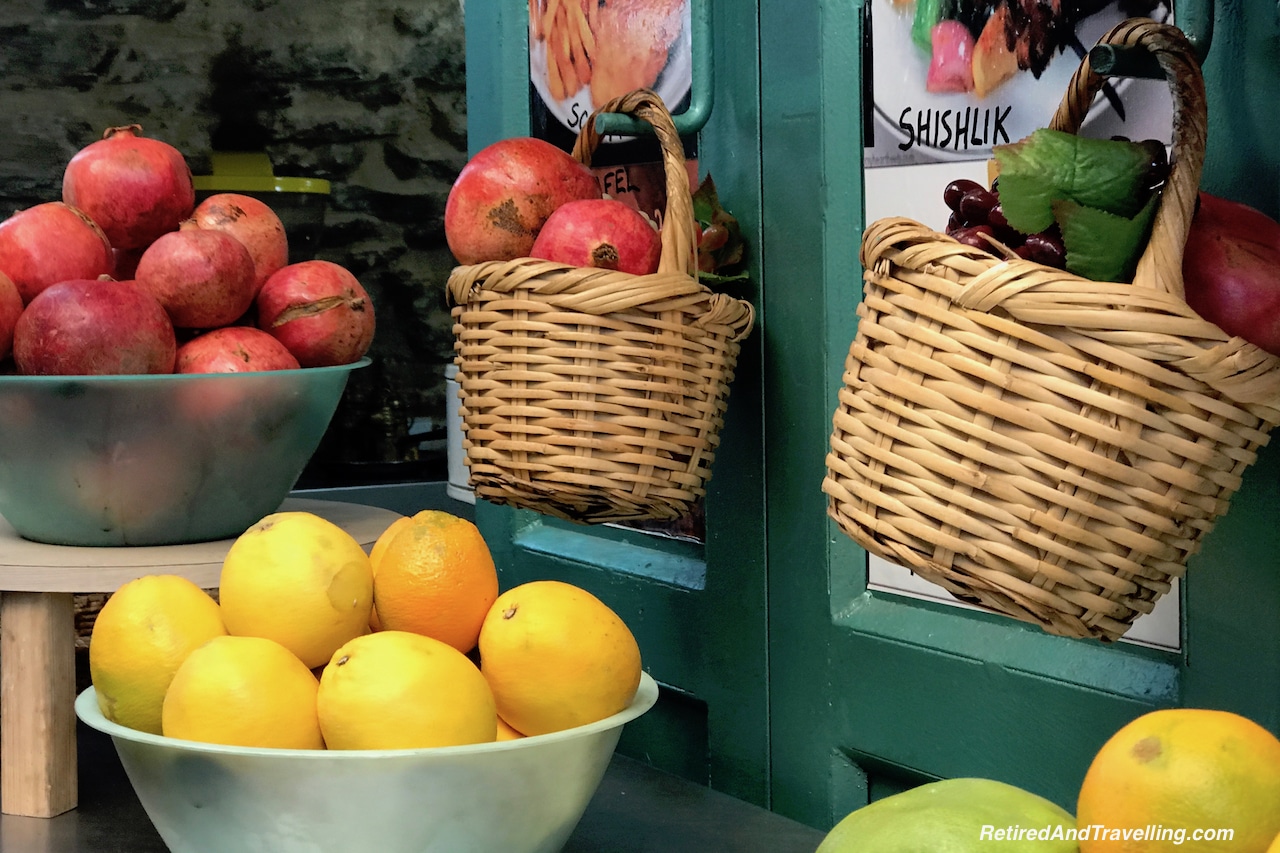 But we were marching on, quite to the dismay of many who struggled to keep up 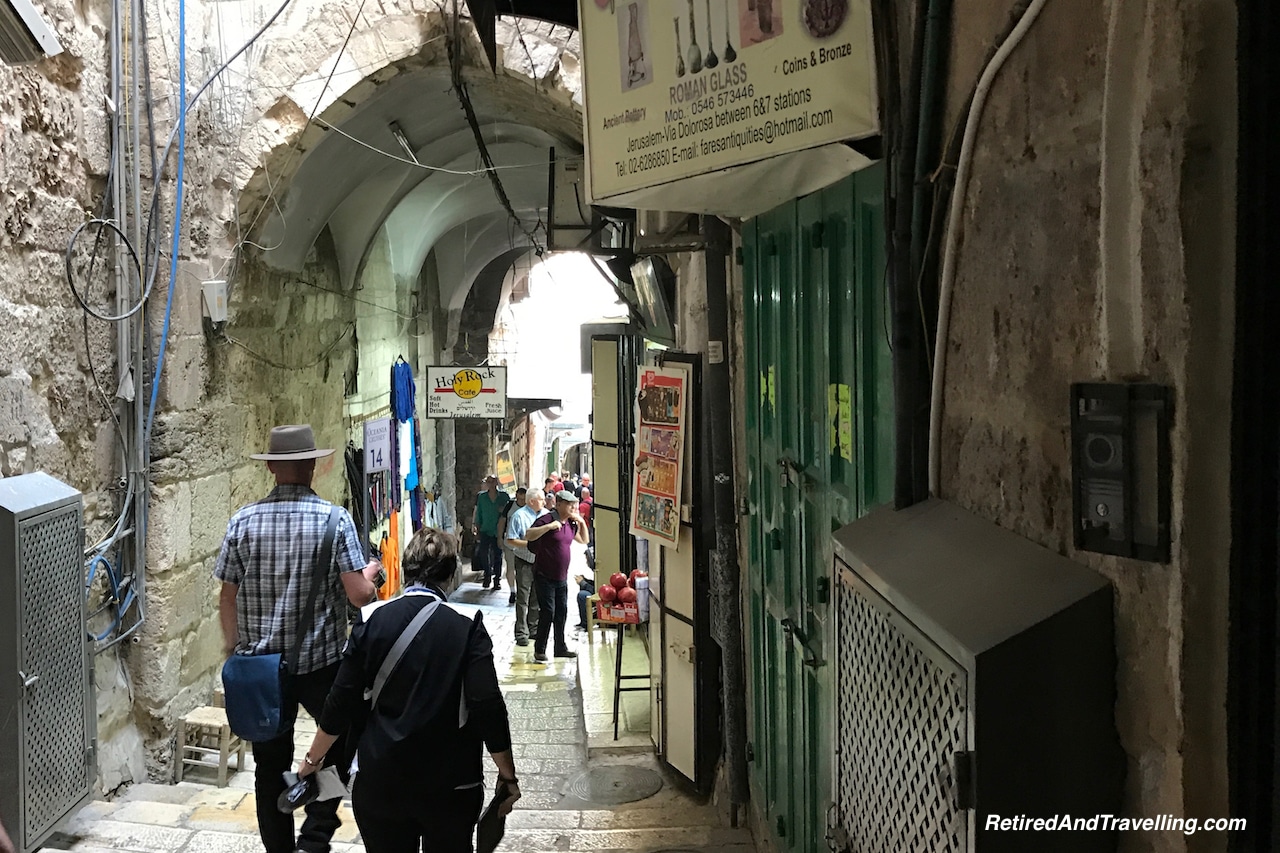 Worshippers At The Western Wall

Our final stopping point as we walked to explore Jerusalem was the Western Wall. It was a large area with separate spots for men and women. The men’s section was larger and included a small synagogue. People went to the wall with small pieces of paper to leave in a nook in the wall. They left their prayers behind to be answered. 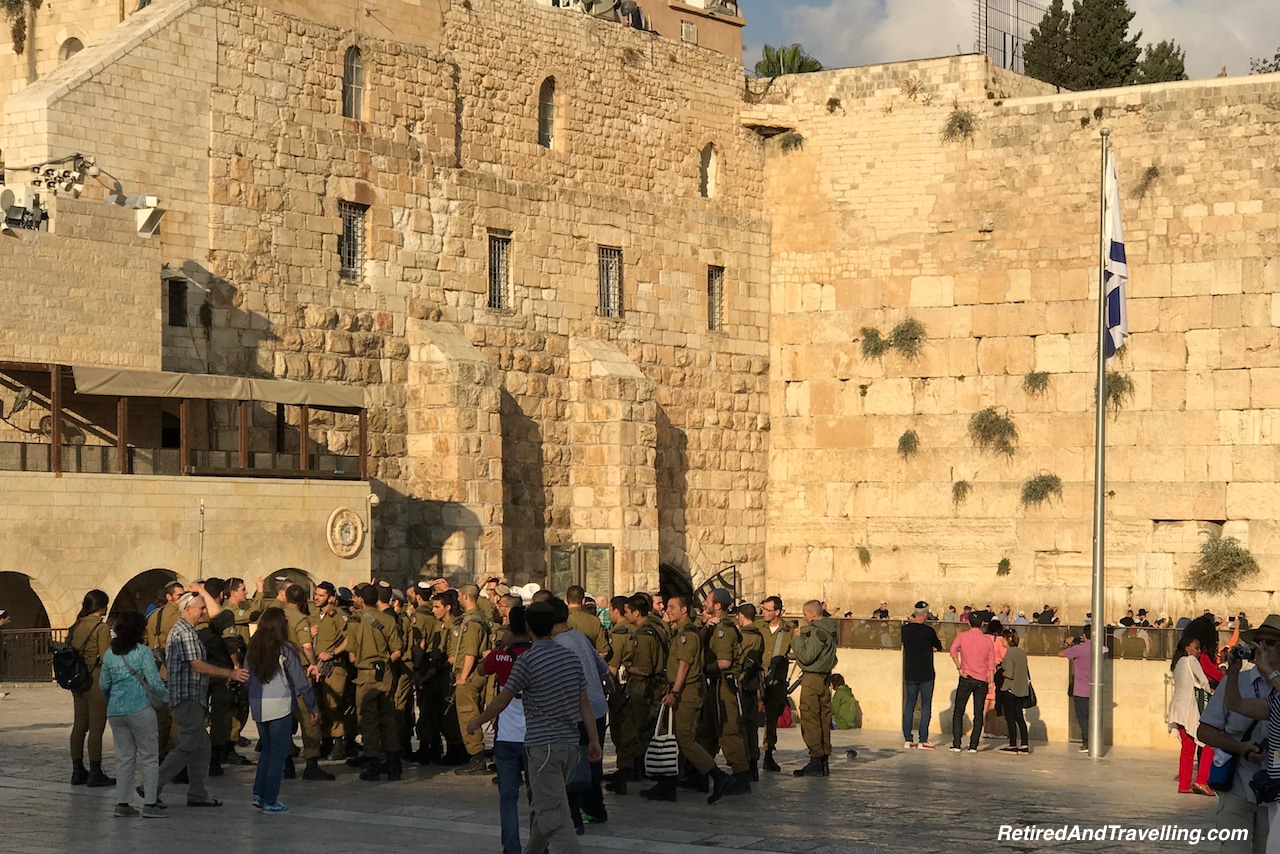 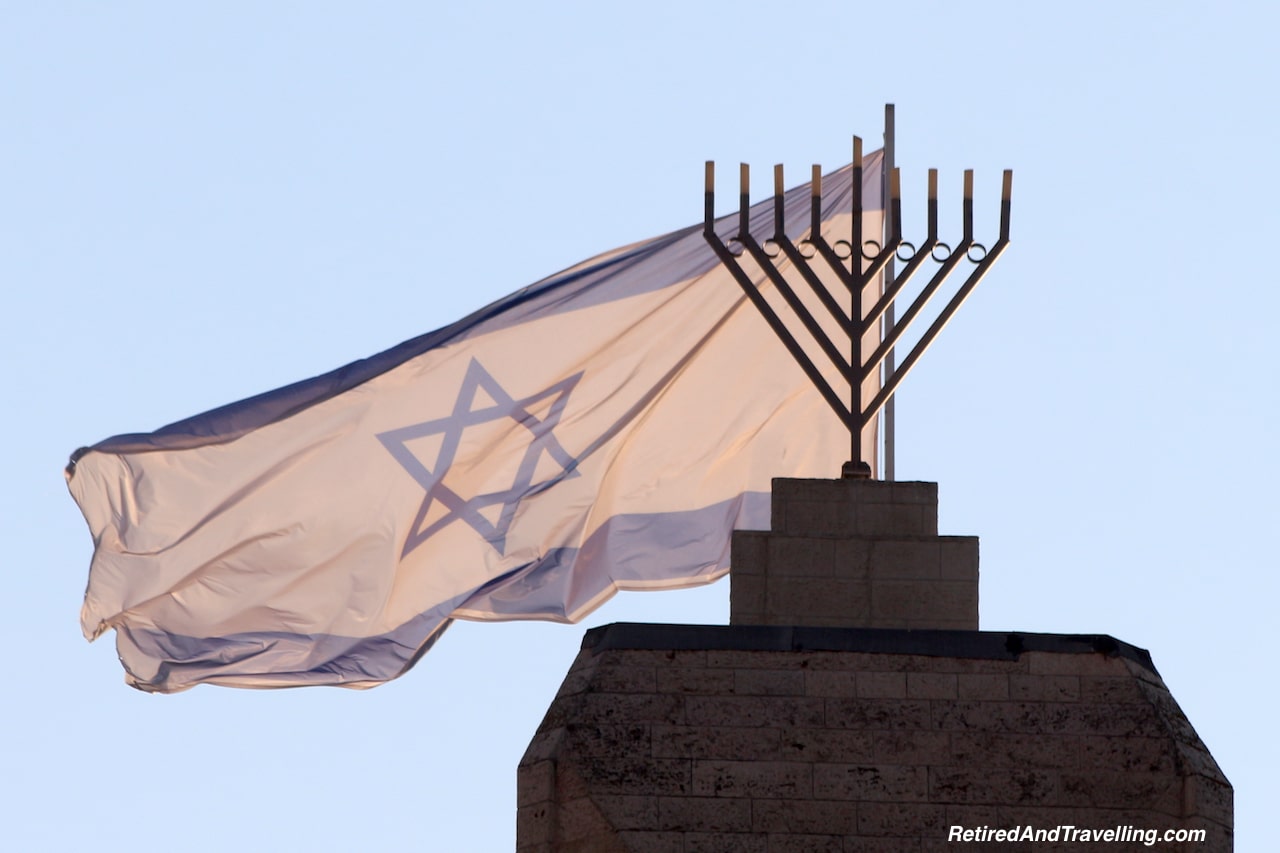 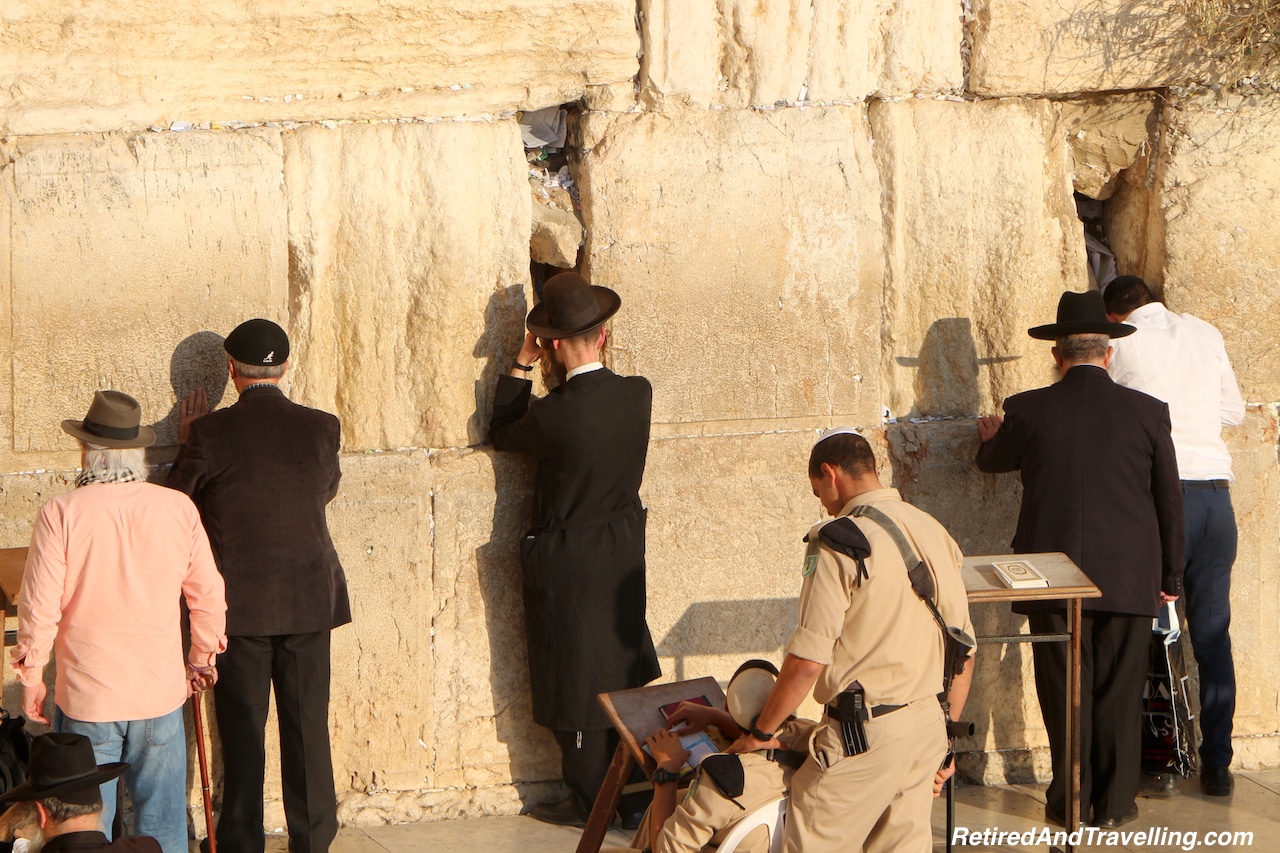 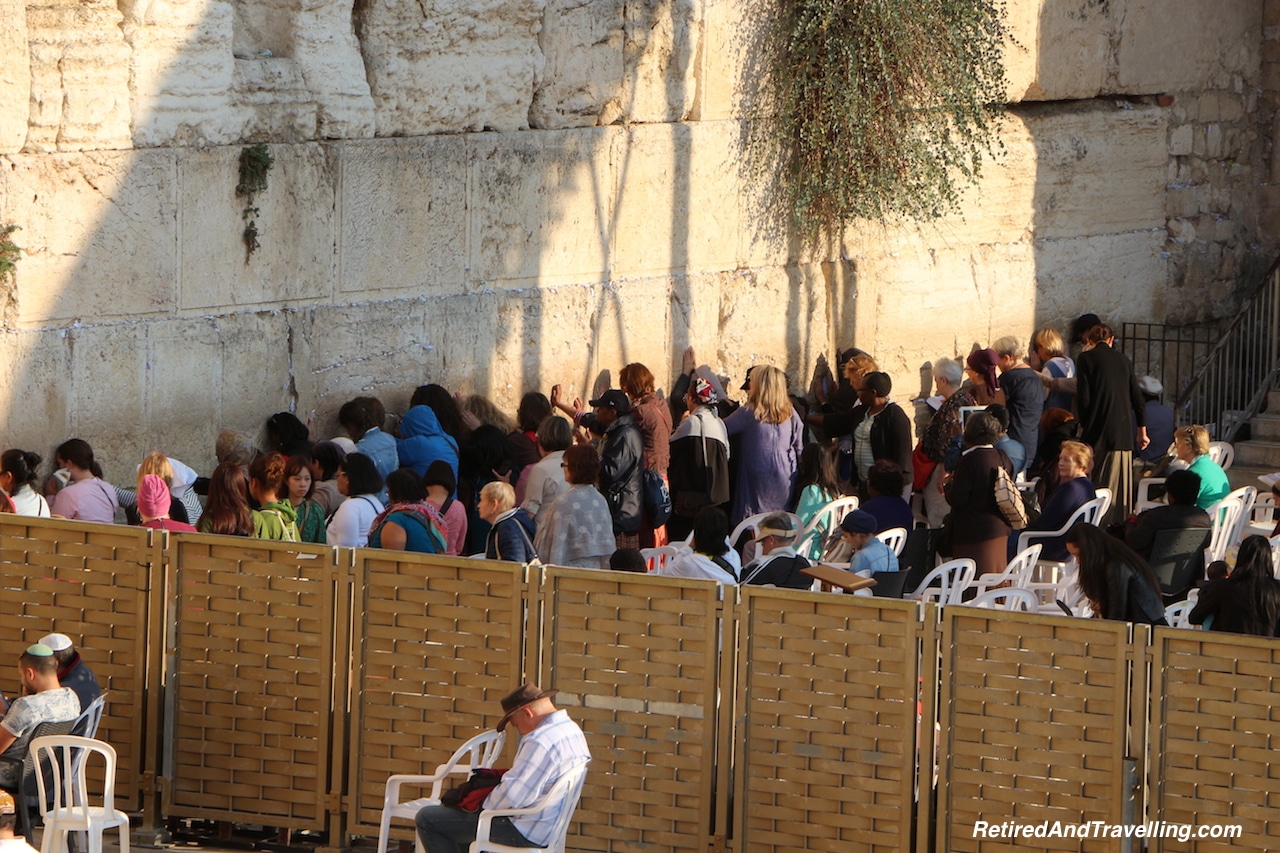 As we left, we caught a view out over the jewish cemetery with the El Aqtza Mosque in the distance. On the horizon we saw Mt Olive, where we had started our day. 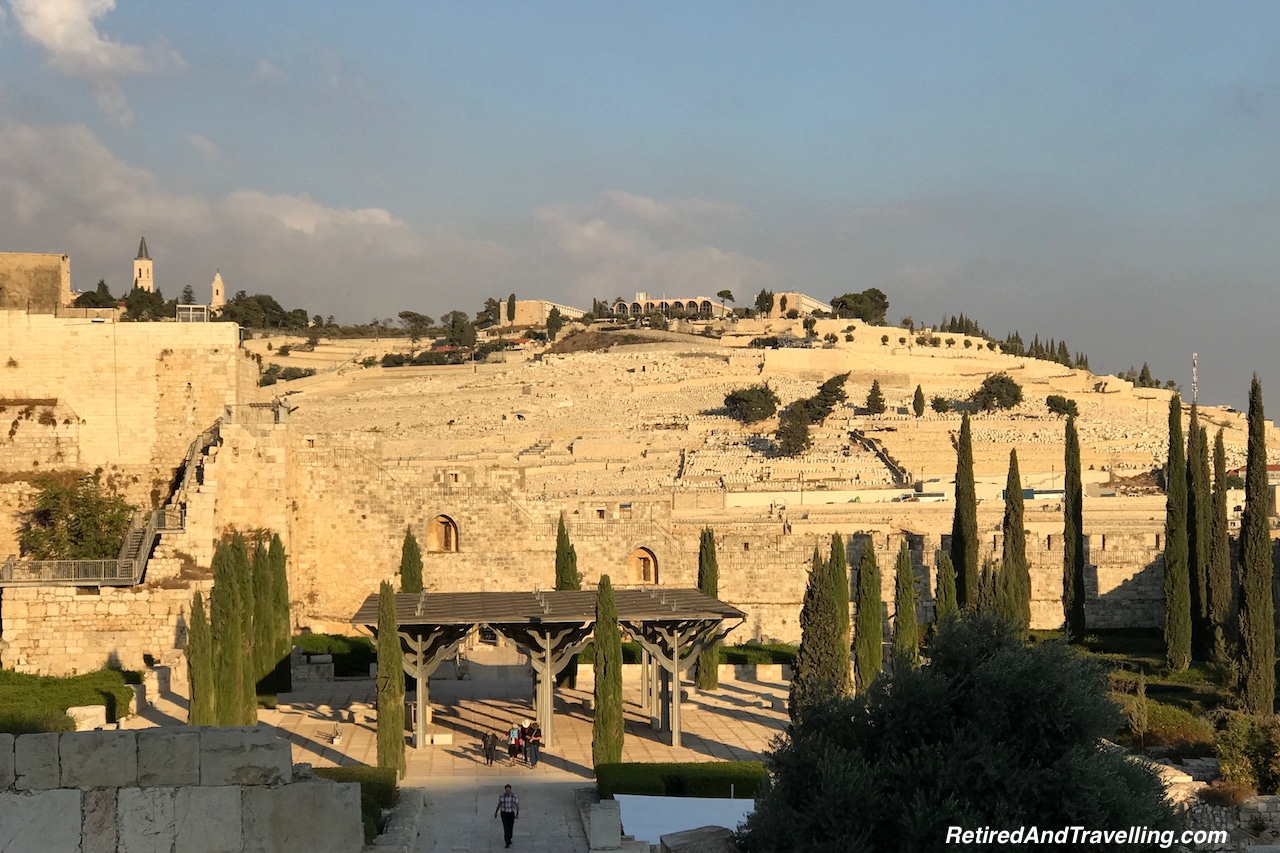 Exiting by Dung Gate, we saw a group of young Israeli soldiers playing with some children. We were told that the soldiers were encouraged to interact with the people. I was not sure I was going to be approaching any of the gun-toting soldiers for a game of soccer! 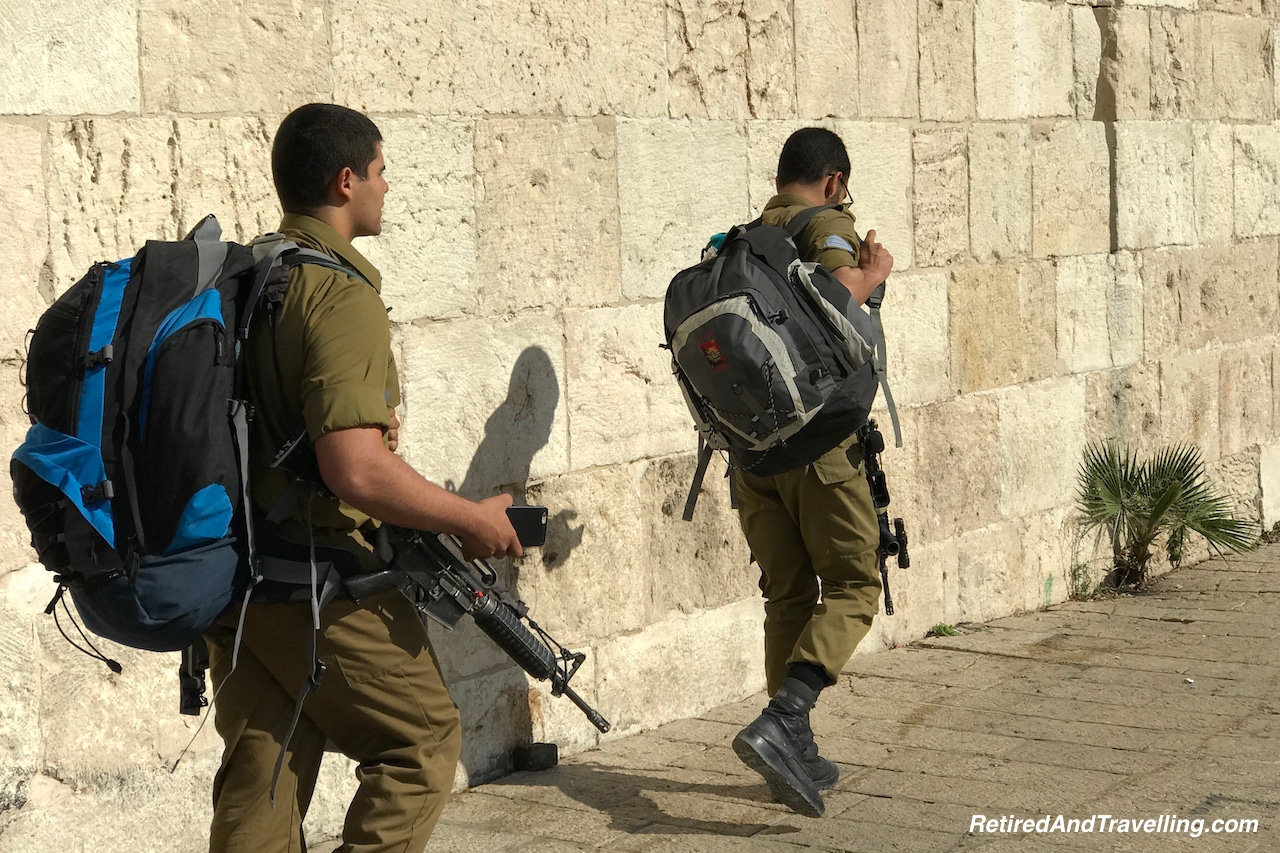 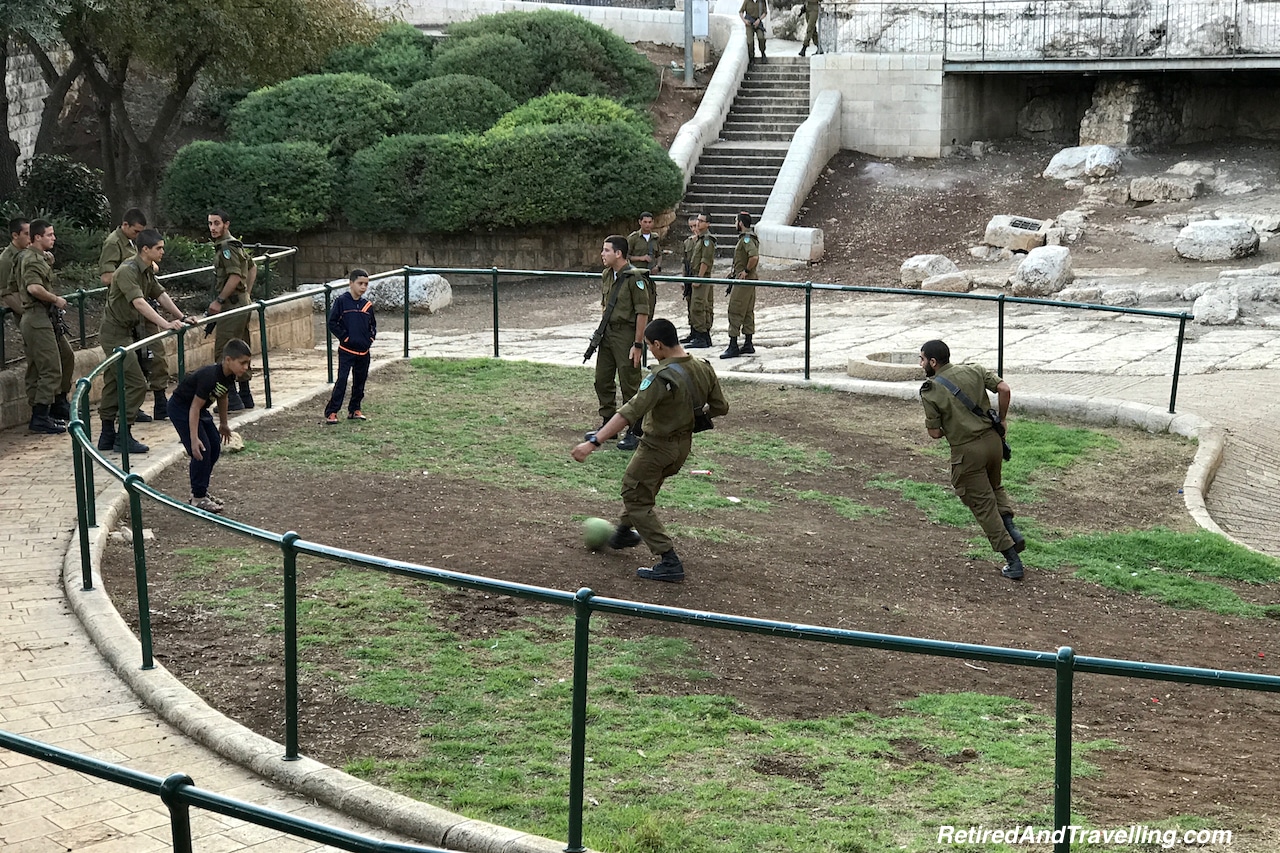 Heading Back To Haifa

On the bus ride out, the driver took us past other tourist spots – the museum, House of Parliament and the Senate. He encouraged us to return to Israel and to explore Jerusalem to see how much more there was to see.

If I were more religious, I am sure the crowded sites and commercialization might make it hard to find a moment of peace and revelation. I did find it odd that the sites of Jesus’ crucifixion and burial were all inside a church and not out in an open space.

The checkpoints and military presence were everywhere, whether it was heading to explore Jerusalem or taking the road to Masada and the Dead Sea. Seeing guns slung over shoulders took a little getting used to. I am sure this deterrent helped to keep things quiet. I was glad to have visited when we did.

Have you had the chance to explore Jerusalem? What sites inside or outside of Jerusalem should be on a tour list? Did you feel safe when you visited?

An Alaska Cruise From Seattle In July

Starting Our Alaska Cruise From Seattle Our Alaska cruise from Seattle in July was for 7 days. We considered flying between Toronto and Vancouver. It was a short hop between Vancouver and Seattle. But when […]

7 Things To Do In Muscat

Our First Stop in Oman There are lots of things to see and do in Oman. We just scratched the surface on our cruise visits. If you are looking for things to do in Muscat, […]