Singapore by Night Gives You A Different Perspective

We often try to look for special things to do in a city at night. When you visit Sydney, you need to see the Sydney Opera House all lit up after dark. When in Bangkok, we did a night river cruise to see that city all lit up. We had enjoyed our visit of Singapore by day but we were so glad we added a night tour onto the hop-on-hop-off ticket. For a mere $10 addition, we would get our money’s worth and more. It gave us a totally different perspective of Singapore by night. 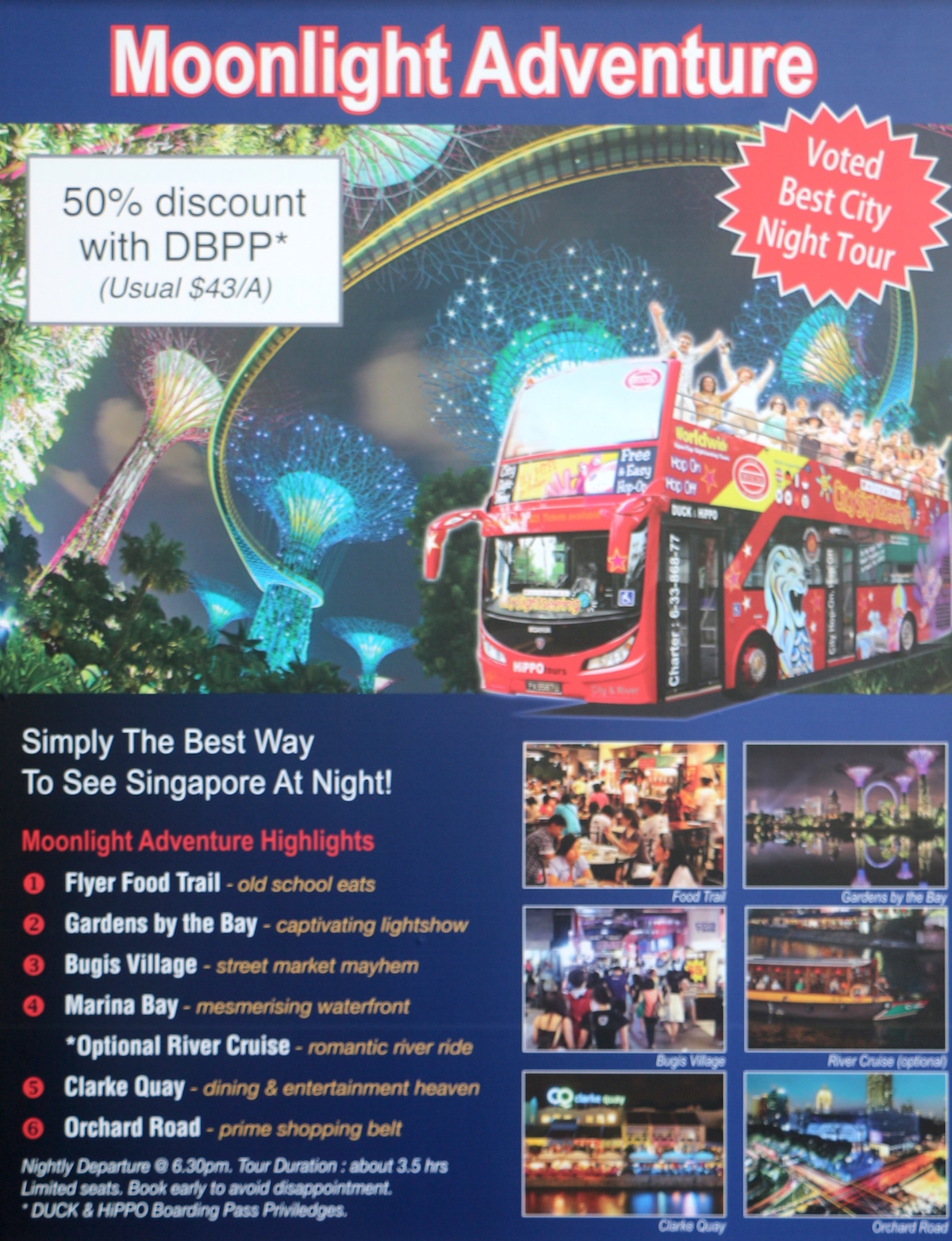 Our night tour lady was an energetic demon who herded us from spot to spot, repeating our pick up time every time we stopped until she was sure she would not be to blame if we missed the bus when it was time to leave.

The first stop on our Singapore by night tour was at a local food market. We were given a voucher for $5 towards our dinner (returning 50% of what we paid for the night tour!). Many people were able to get a great dinner for just $5, while a few had to top up a few dollars if they ate and drank. There was a good selection of local foods and we ate well. 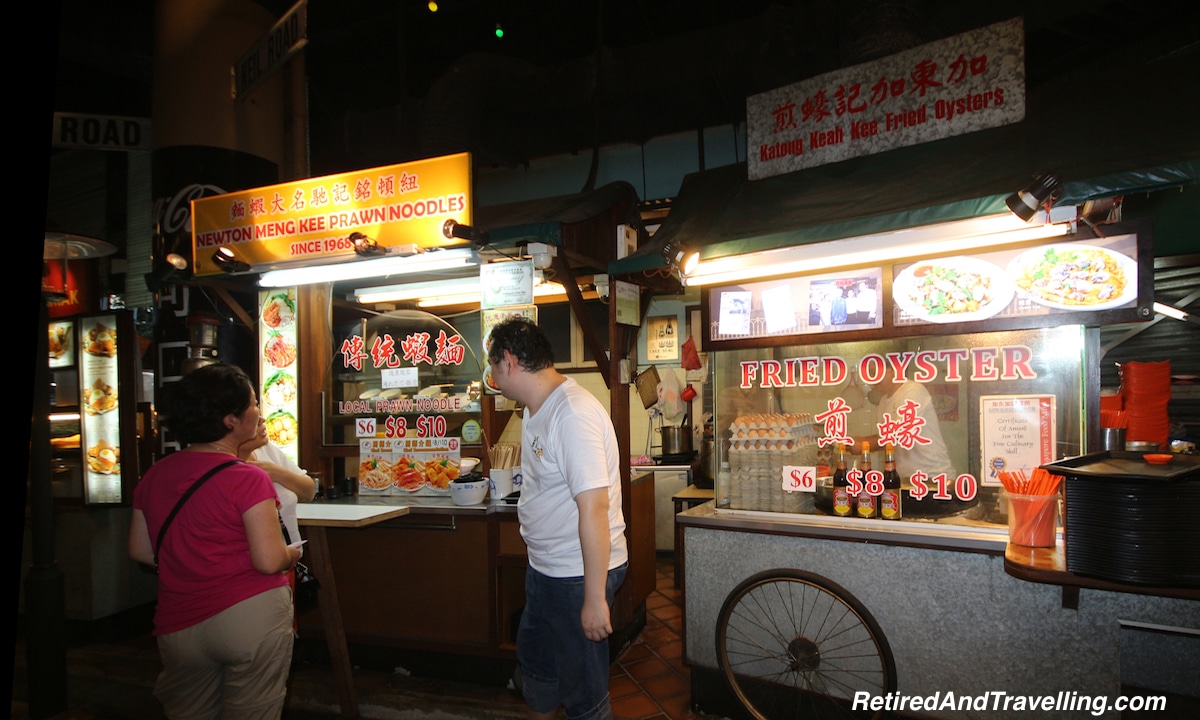 We made a later stop at the Bugis market. This is a large market filled with rows and rows of shops. While there are a few food stalls, most of the stalls are selling other goods. You could bargain for almost anything you were in the market for. We wandered to see the wide array of both local and tourist goods, not really needing anything but enjoying the experience. 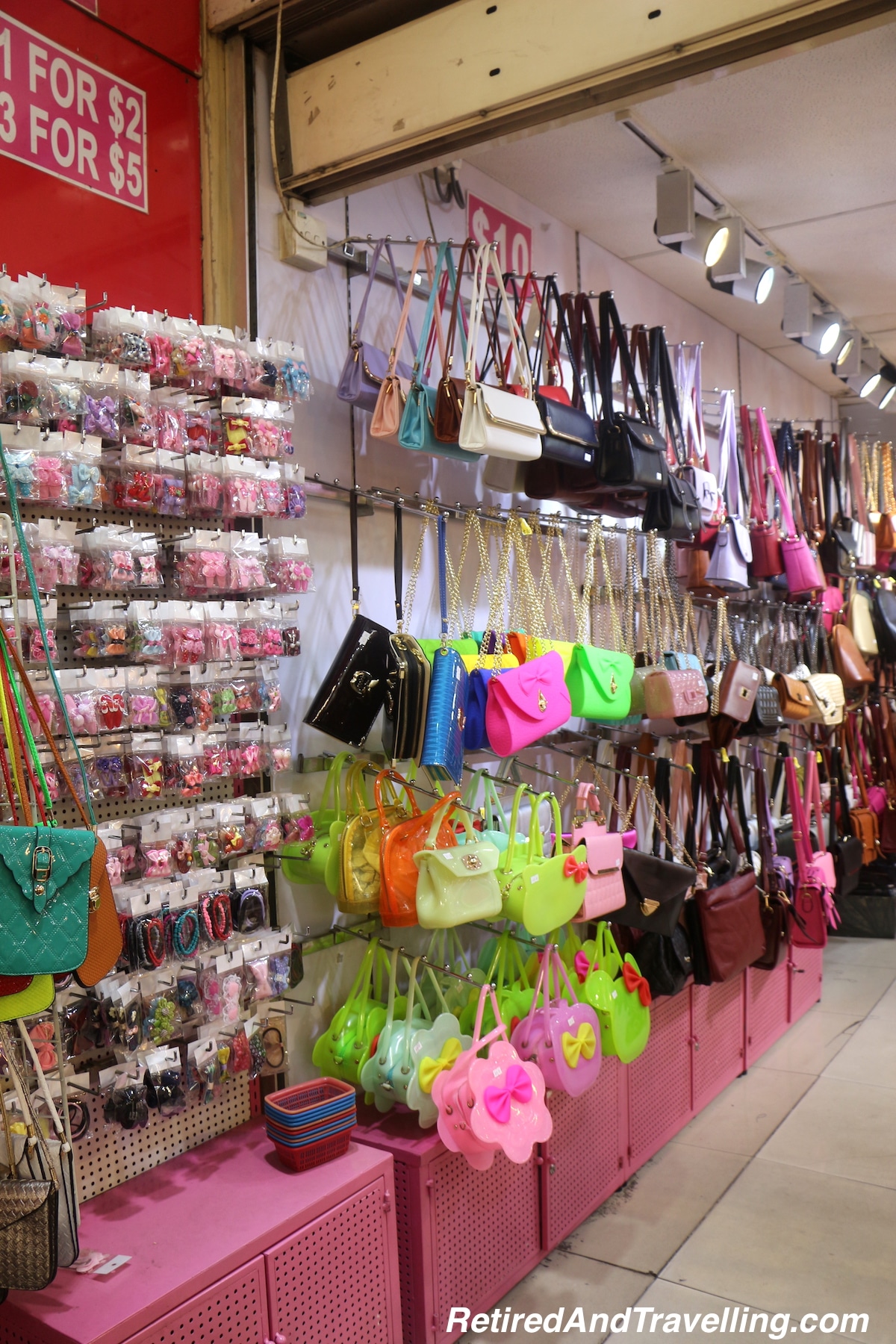 Durian (the “stinky fruit”) is sold all over SE Asia and this market had durian fruit and various things made with durian. We were glad that nobody chose to bring that back on the bus. It is so bad that many places we found in SE Asia, specifically prohibited durian being consumed on their premises. 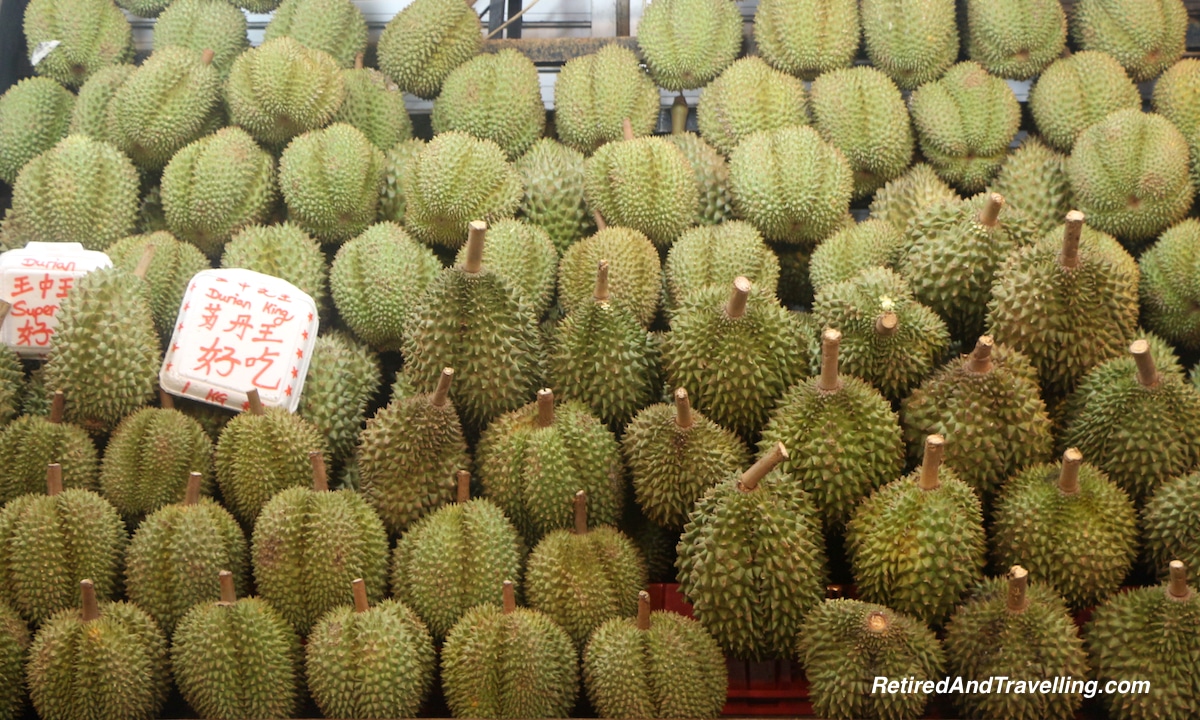 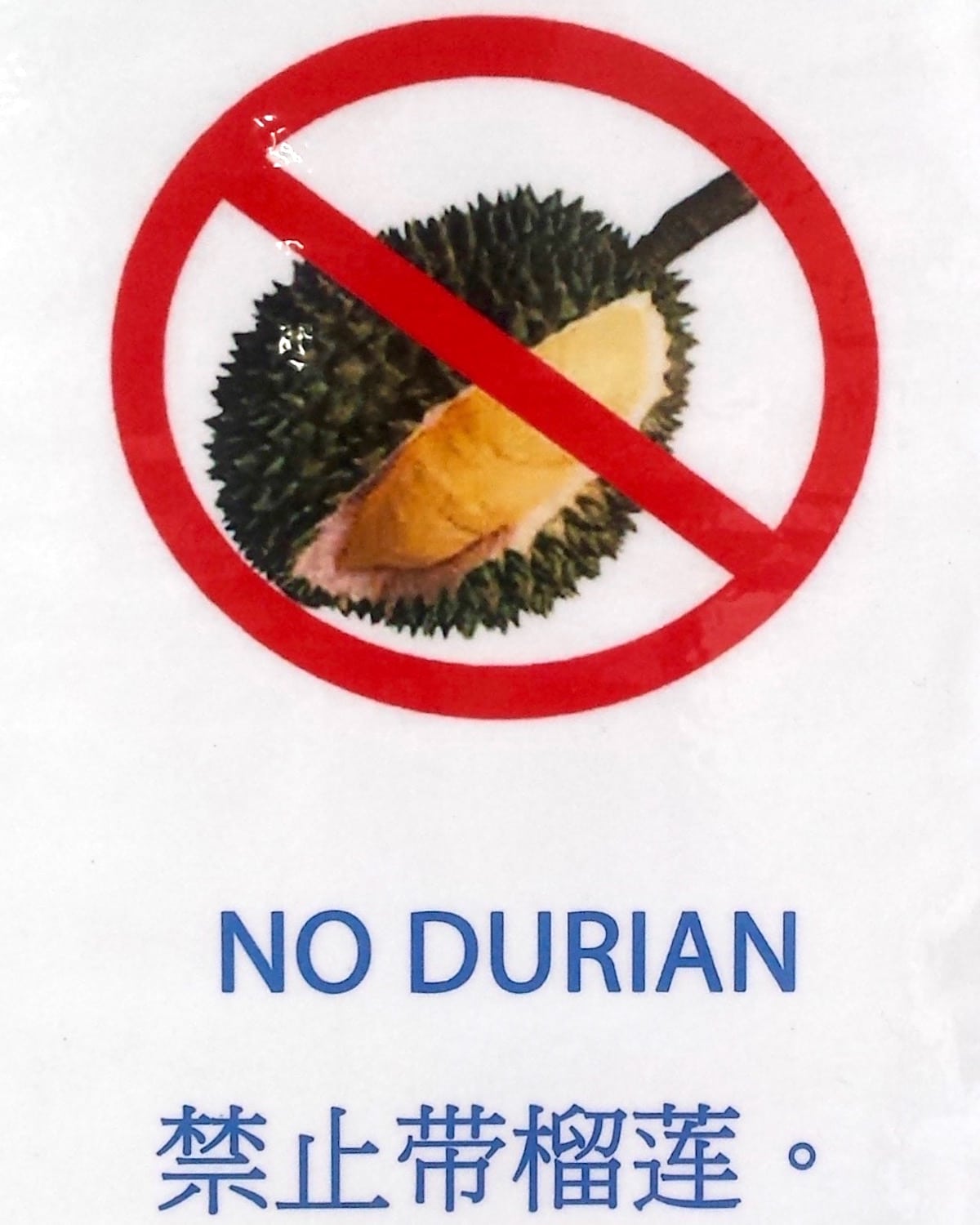 Gardens by the Bay

Singapore has been called the Garden City. You can find trees and flowers almost everywhere you go. But to see the largest glass greenhouse, visit the Gardens by the Bay. While the greenhouse is a major draw, the Singapore Supertree Grove is a “must see” on any Singapore itinerary. During the day you might find the Supertree Grove to be interesting. 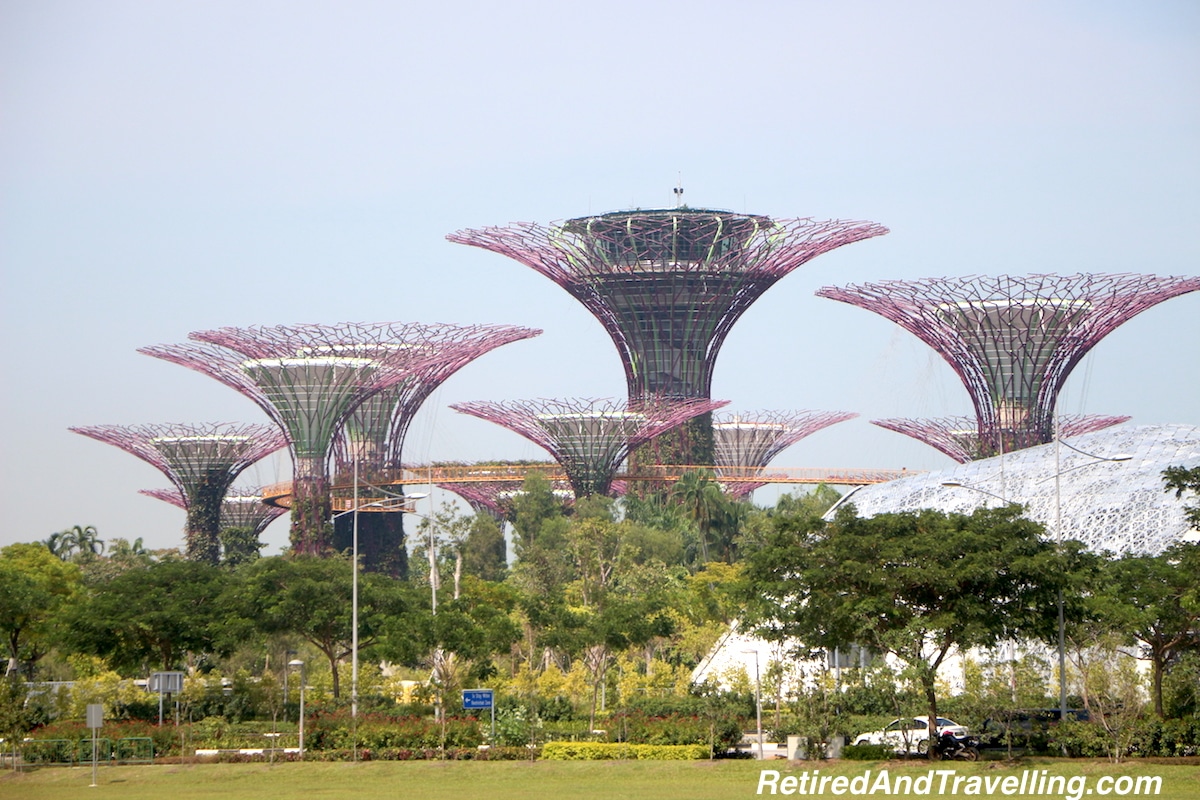 But when touring Singapore by night, you can’t miss out on the magical light show at the Gardens by the Bay. The Supertree Grove had started to glow as we arrived and tried to get an initial set of pictures. We weren’t left to dawdle too long before we where moved along. 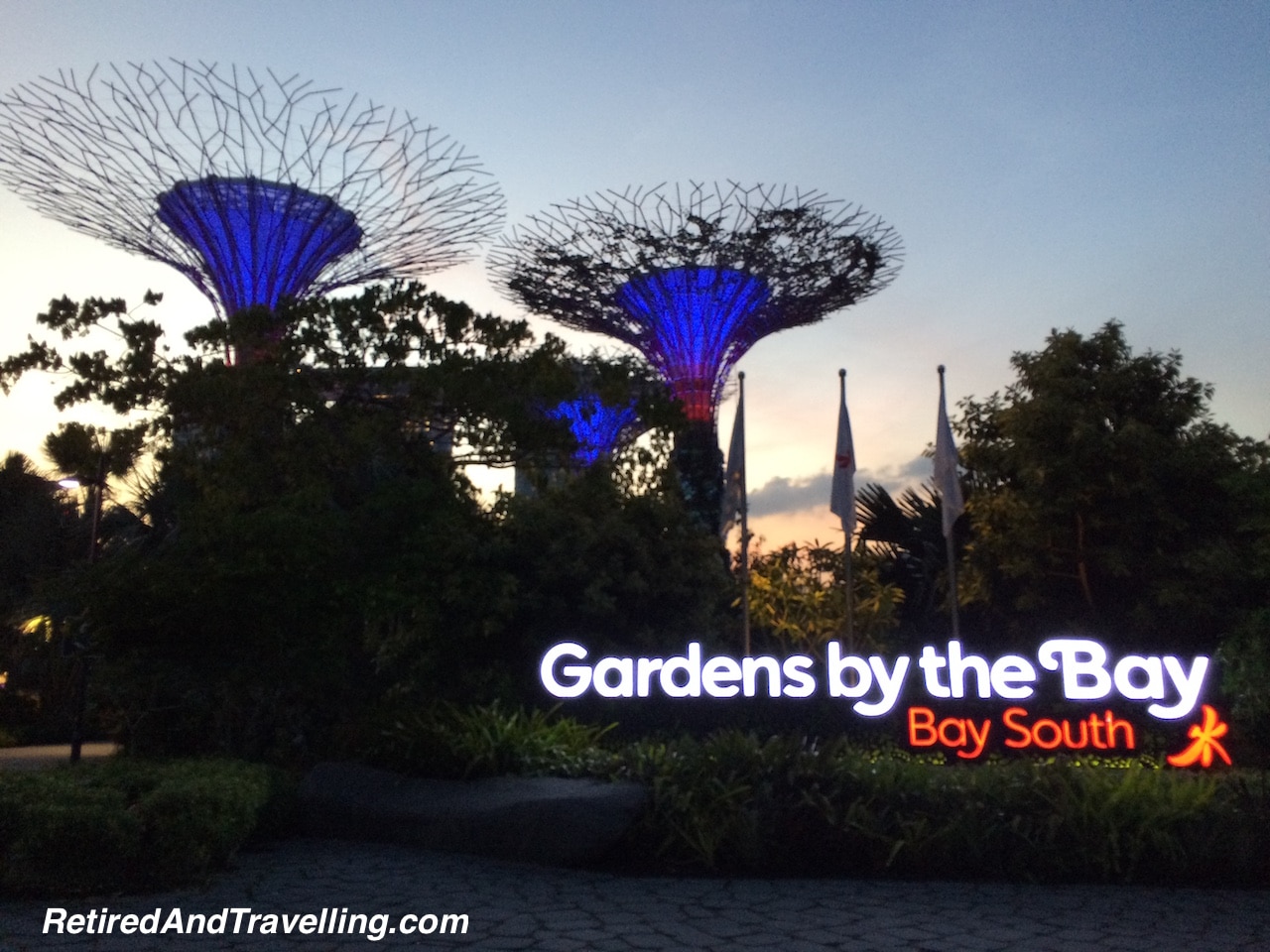 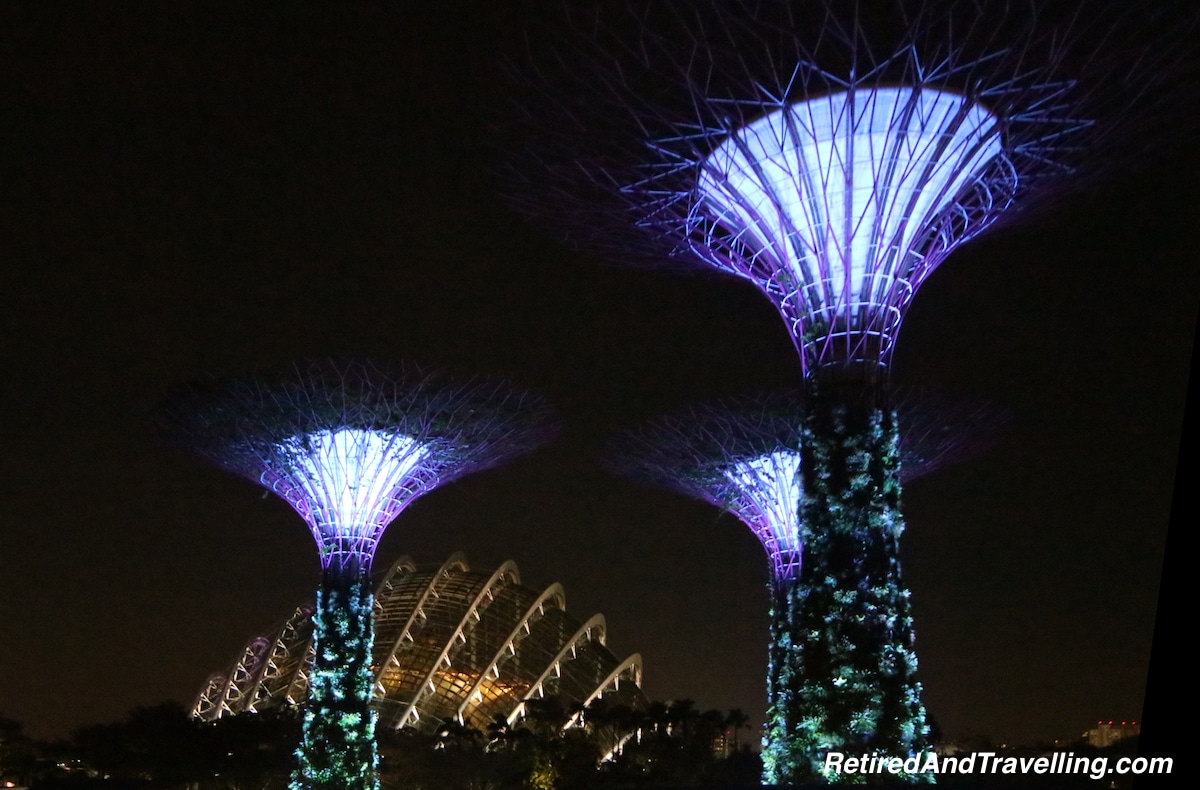 Light Show Delight at the Gardens by the Bay

Herded inside, we were told where the best spot would be to see the show. David set up his camera on his monopod and Nick found a spot to lay down and look up at the show. The Supertree Grove glowed around us and slowly came to life in a rainbow of colours. 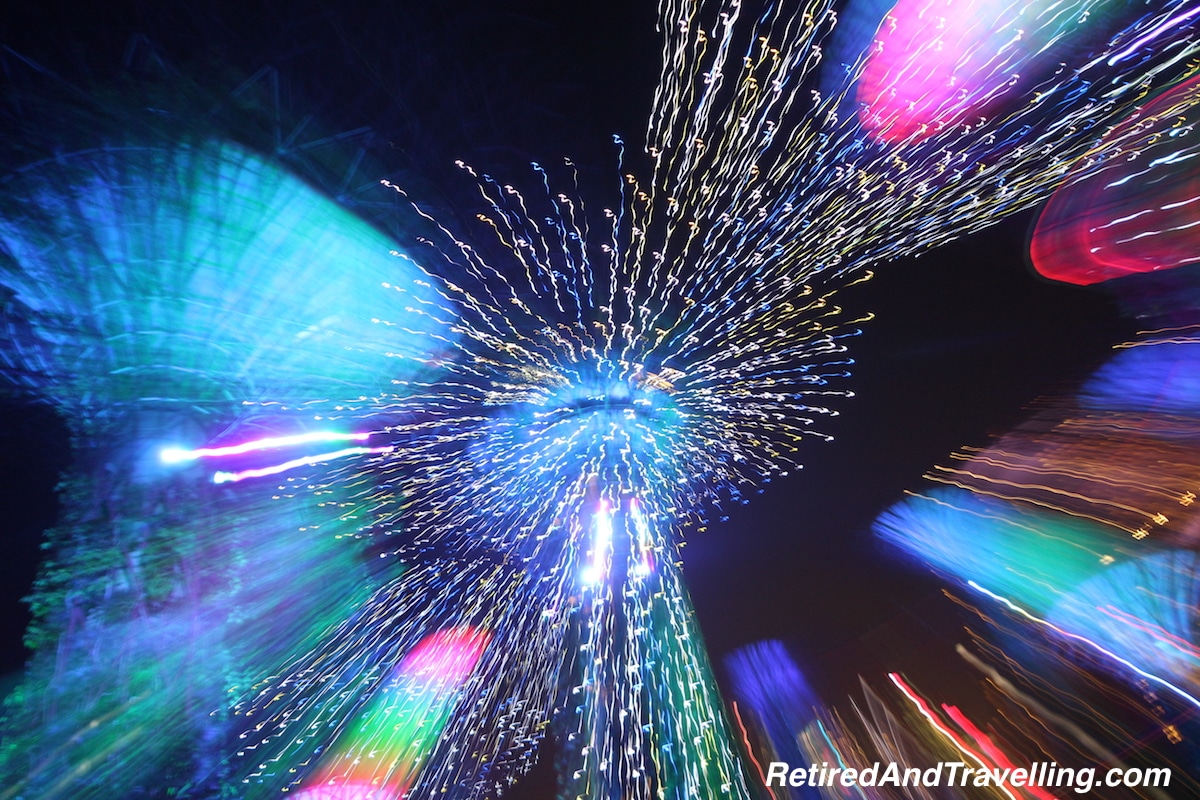 The musical sets included a broad range of music from pop to classical to the Phantom of the Opera music. It proved to be an awesome entertaining light show set to sound. 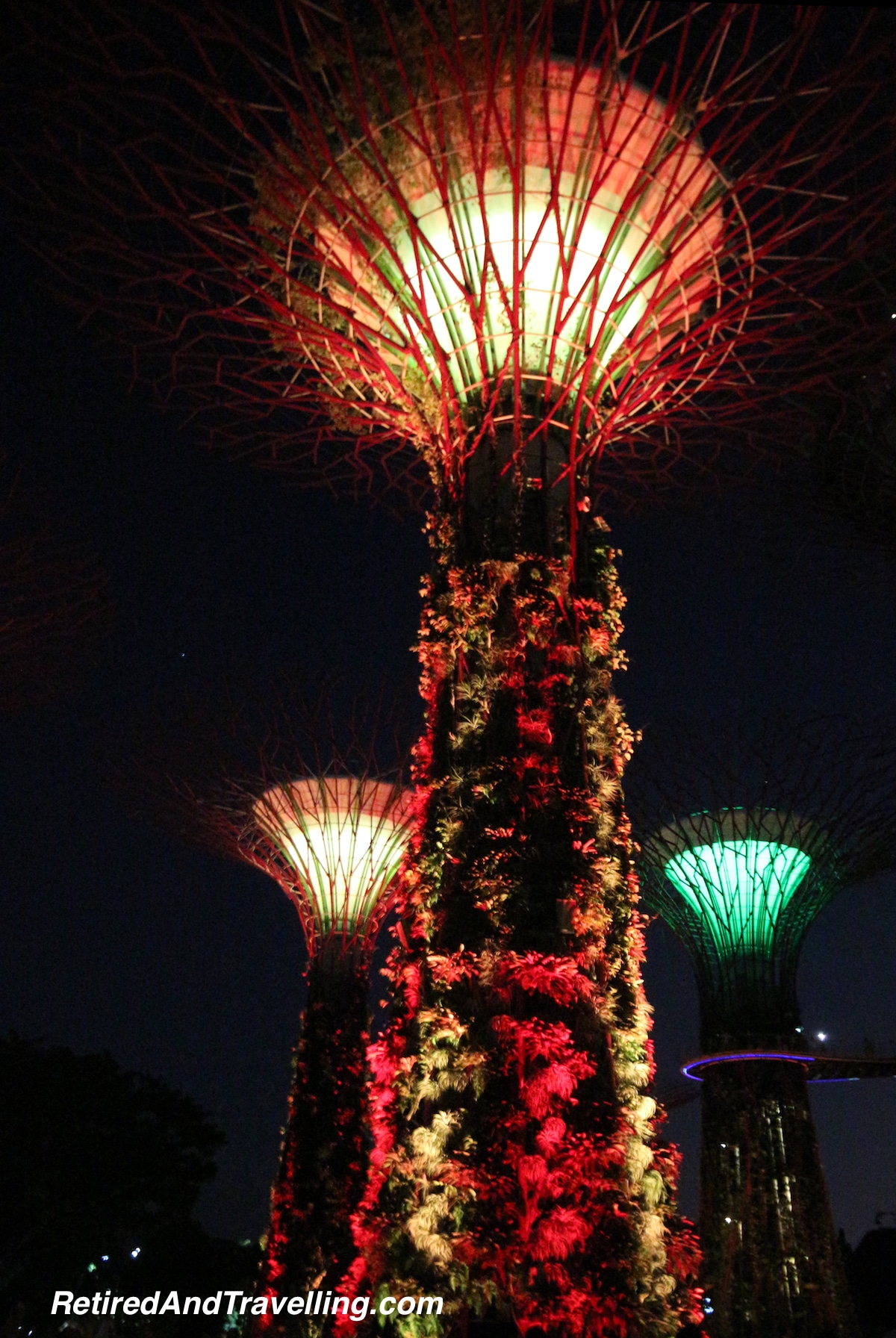 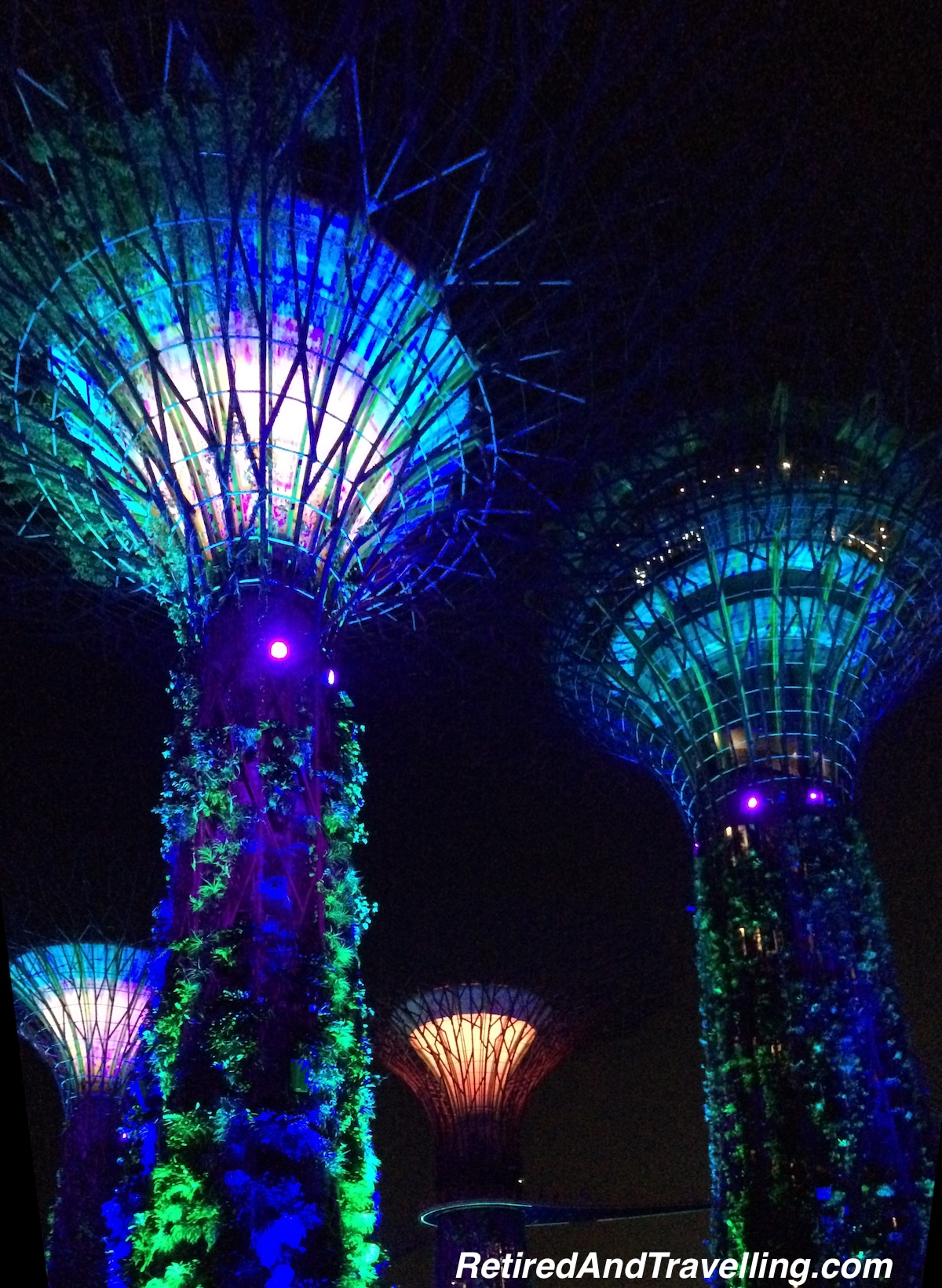 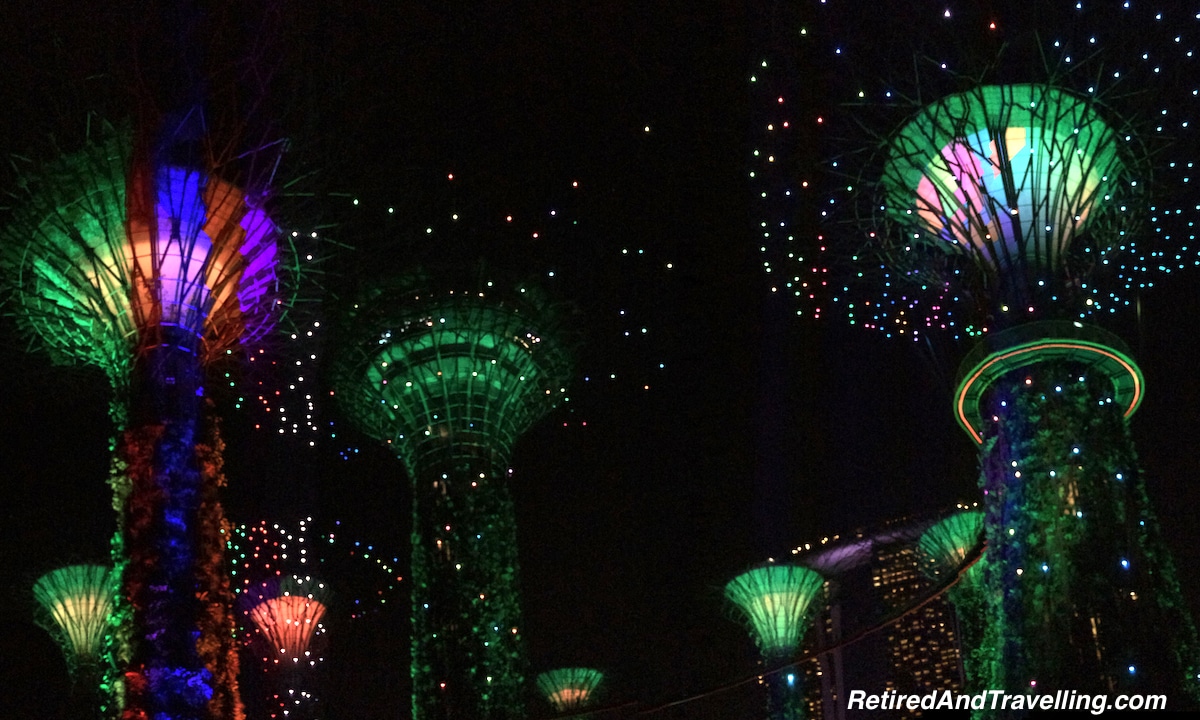 The show lasted almost 30 minutes and this show seen up close from the front row would have been worth the price of our night tour ticket had that been the only stop. If you want to see the video, make sure you check out:

This was a magical view of Singapore by night! But we were not yet done.

Singapore Skyline All Lit Up

The next stop on the tour gave us a chance to walk along the bay at night and take pictures of the Marina Bay Sands and the downtown financial district all lit up. Most of us had tried to get good pictures of the Singapore by night scene from the moving bus so it was great to stop and be able to frame just the right night picture. 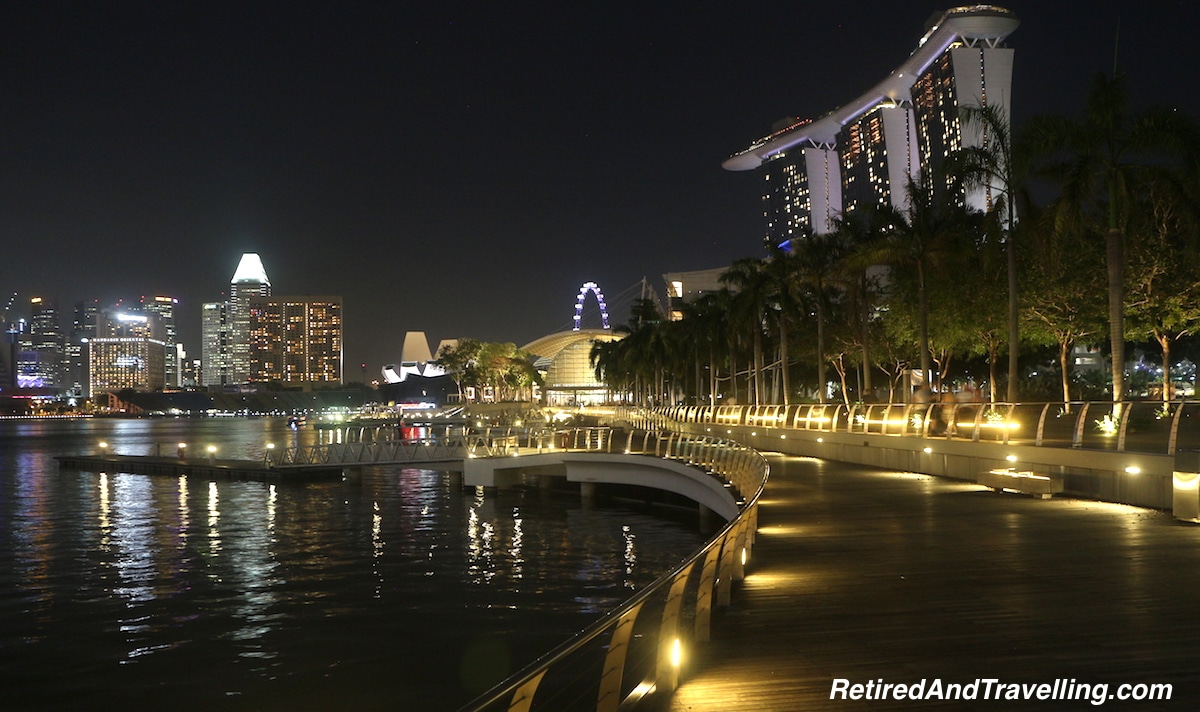 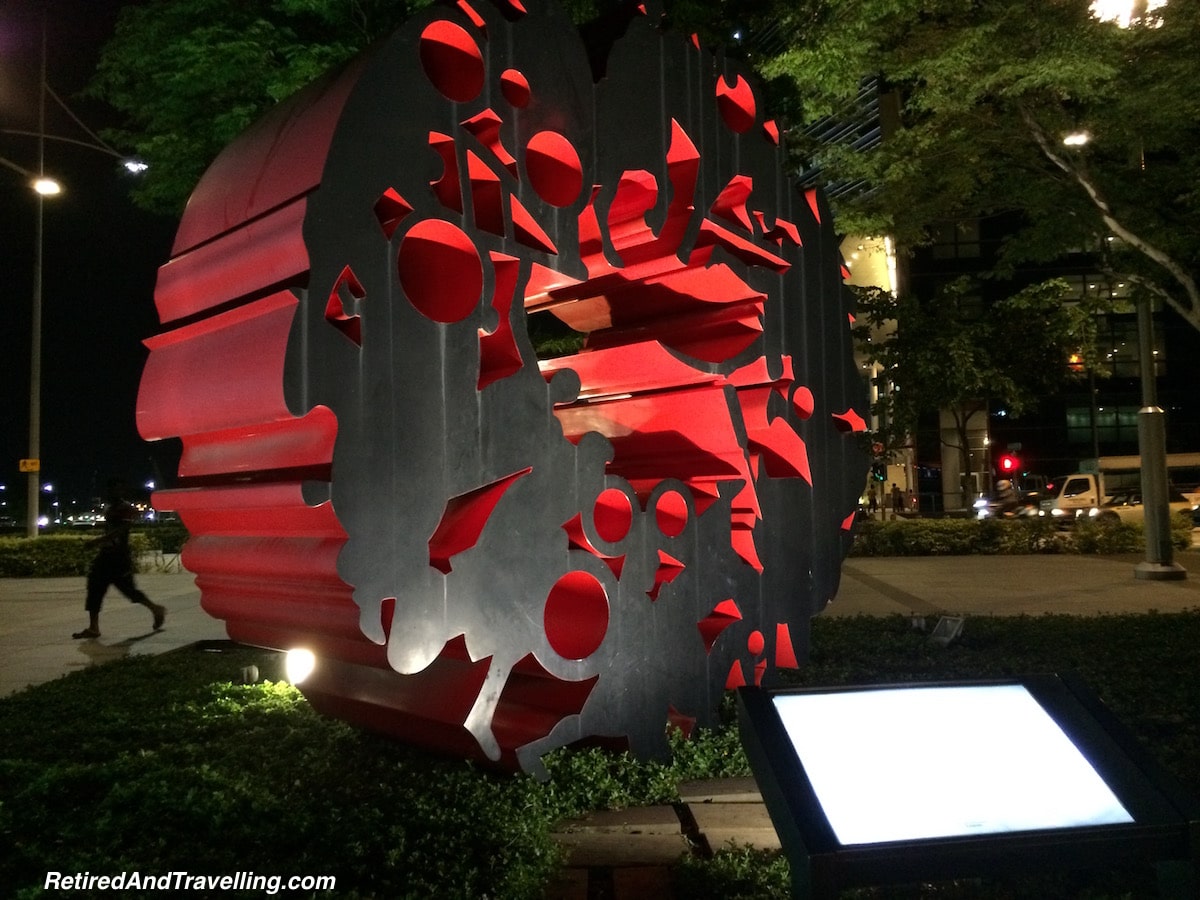 The bus continued its ride around town with our guide repeating many of the tidbits of local knowledge and Singapore site information that we had heard on our day tour.

The bus made two stops to let people off closer to their hotels rather than having them go back downtown to the bus terminus. Luckily we were able to get off near Clarke Quay for a quick walk back to the hotel. I would absolutely suggest that you add a night tour to your list of things to do in Singapore. It was certainly a bargain when added for $10 to a hop-on-hop-off bus ticket.

So Much Fun To See Singapore By Night

There is so much to see when you visit Singapore. But we were delighted with our Singapore by night tour. I am not sure if you can book this tour without adding it on to a hop-on-hop-off ticket but there are surely other night tours of Singapore. If you don’t find a tour, you can head out on your own after dark to see Singapore by night. We would strongly recommend that you go to see the great light show set to music at the Gardens by the Bay and try to get right under the lights. It will be worth the visit!

Did you enjoy exploring Singapore by night? Did you take a tour or wander on your own? What was your favourite night sight? 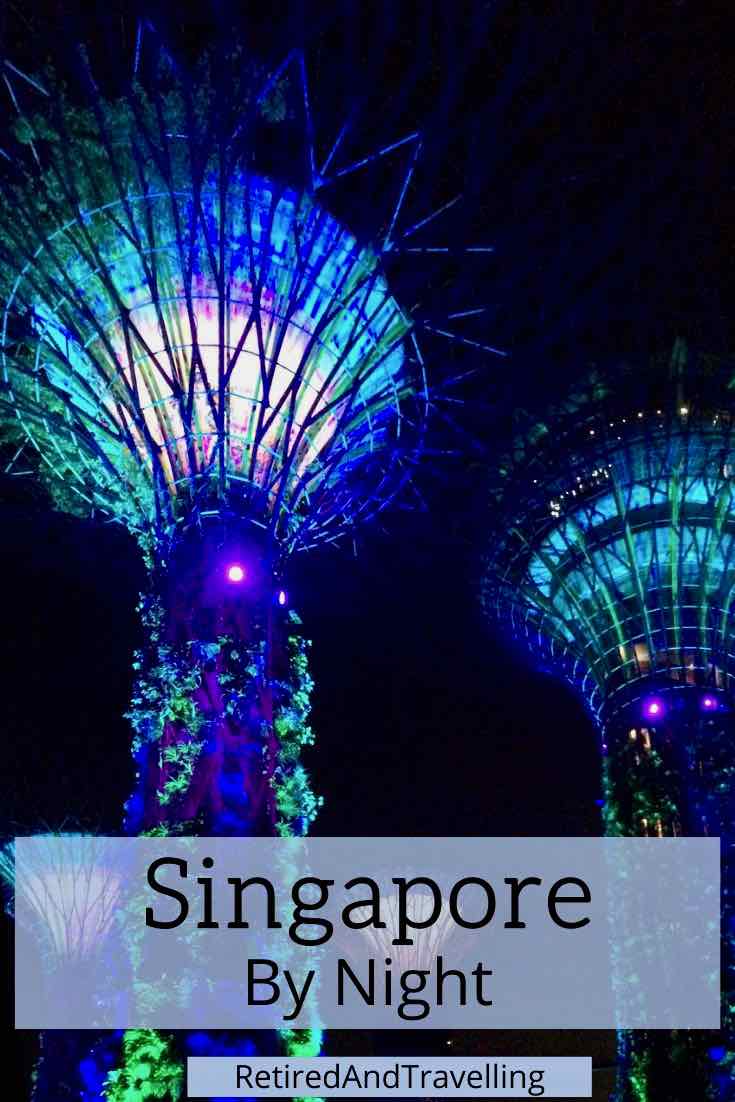 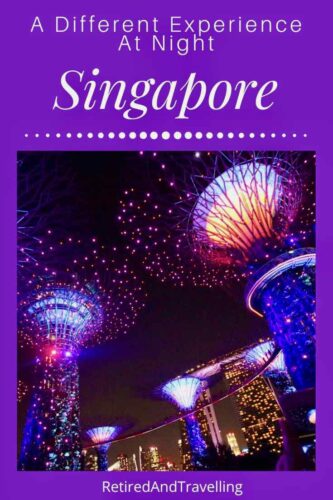 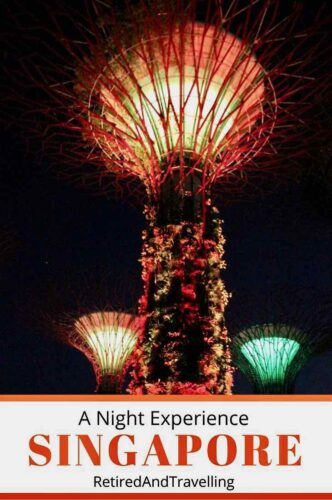