When you live in Canada, by February many of us are desperate to escape and head for warmer spots. When we left for Nassau, the forecast for Toronto was -28°C before wind chill (or -18°F). Last year we headed back to Cuba for two weeks. We came home a week early after getting terribly sick. But that is another tale. It made for a very long Canadian winter! This year we were eager to see the changing face of Nassau in the Bahamas.

My best friend Rob has a large condo in Nassau, Bahamas. He regularly offers it to us but we had not been down for 5 years. When he suggested we head down this year, we were ready and willing.

The week before we were to leave for Bahamas, Toronto finally got some snow that stayed around. We were counting sleeps. Bahamas is a short direct flight from Toronto, so even the crowded, noisy plane and seats at the back of the bus could be tolerated. 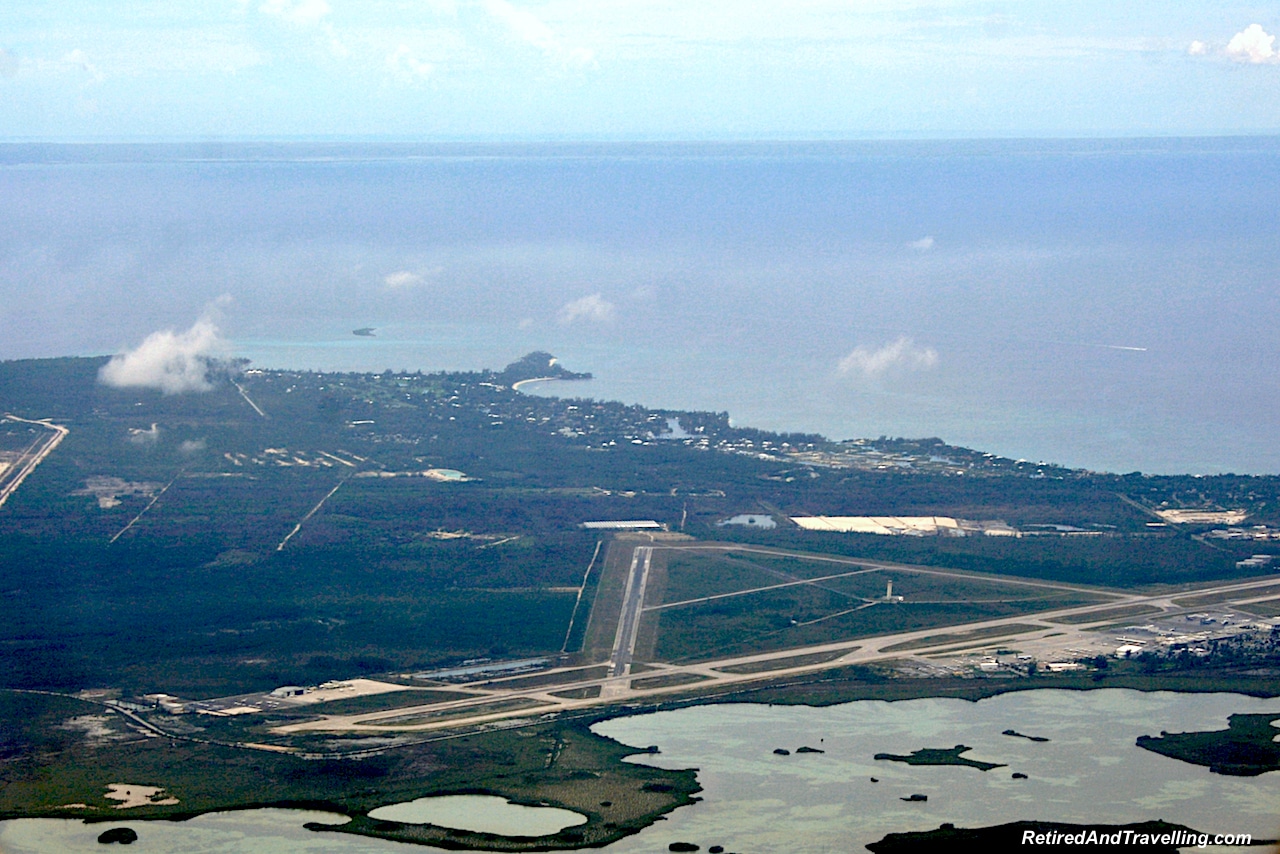 The first sign of the changing face of Nassau we saw was the growth and polish of the airport. The Lynden Pindling International Airport is the gateway airport for The Bahamas. It was renamed in 2006 for the first Prime Minister of the Commonwealth of the Bahamas. While outdated and at capacity in 2008, major redevelopment has happened in 3 phases since that time. The new terminal to serve all non-US international destinations cost about $83.5million.

I had been travelling to Nassau for a long, long time and still remembered the days of deplaning to the tarmac. Larger jets now all get a proper gate. Even if WestJet gets the furthest gate in Nassau as it does in most Canadian airports. The walkways are all now inside and air conditioned. Passport control is located in a large holding area. Live Bahamian music played to get us in the Caribbean mood.

An Easier Route To The Airport

Once you pick up your bags, don’t bother to look for carts. There are none that we could see. But there is a long line of porters just waiting to take your bags if you really can’t manage to roll them. This time we almost had to get help. The extra scuba dive bag required one more hand than we had. Yes – that does mean we had 4 other bags, even if 2 were rolling carry-ons! 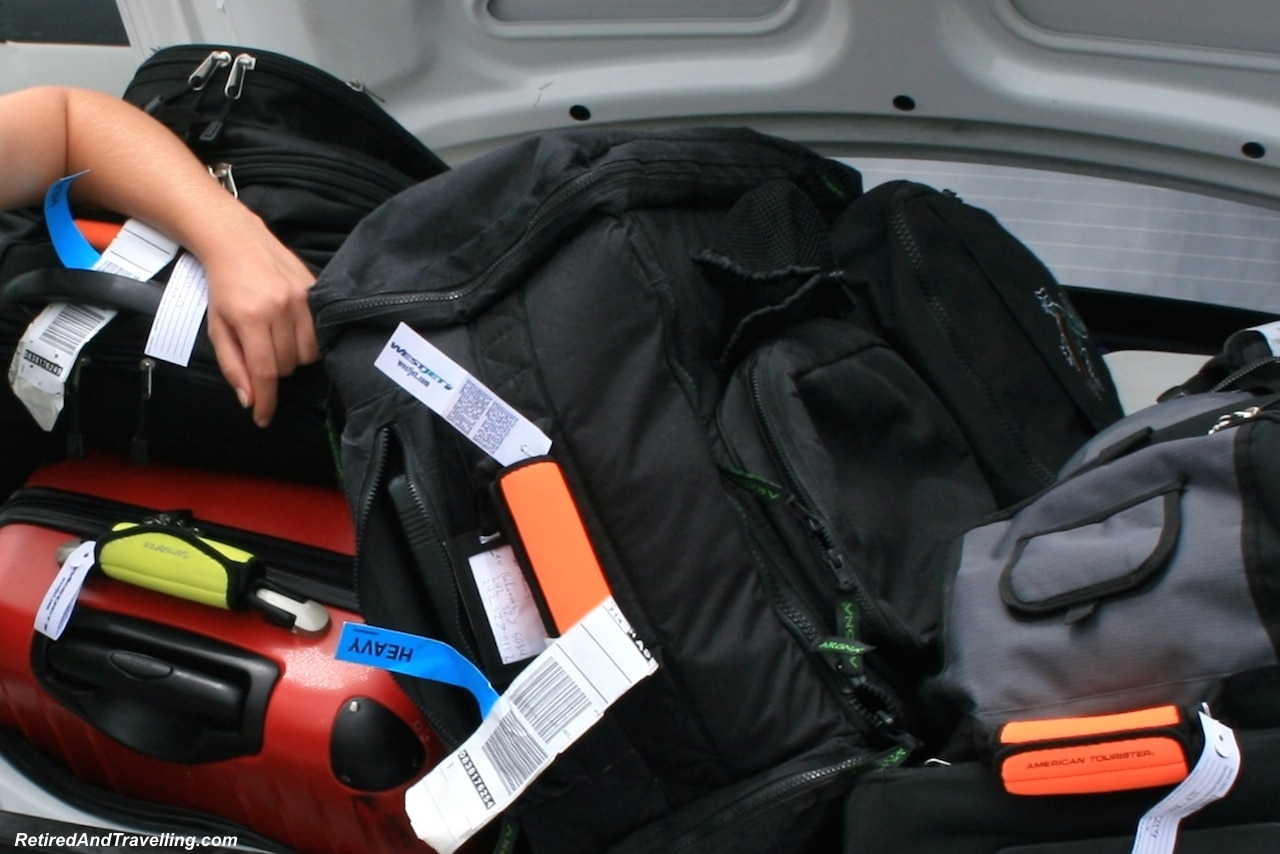 We exited the baggage area to be swept up in a big hug by Derrick. He very kindly said we hadn’t changed in the 5 years we were away. Derrick is my friend’s driver and generally in charge of the condo. Not only did he whisk us from the airport but he stocked the condo with food, poured us champagne while we caught up and then told us he was on call while we visited. My friend knows how to spoil us!

Each time we have been back, the roads have gotten bigger and better. On early trips to Nassau, I remember a scenic tour from the airport along the shore beyond the private gated community at Lyford Cay. The new divided highway from the airport to Cable Beach made the trip fast and easy. This was a great improvement in this changing face of Nassau !

I have been travelling to Cable Beach for over 20 years. Other than in the heart of hurricane season, Nassau is a great escape from Toronto. Friends were surprised when we even visited in July . But we will take guaranteed hot, sunny days over the potential of a wet, gloomy week in cottage country north of Toronto.

Cable Beach has always offered a great beach getaway. It is a short bus or taxi ride into the downtown area or out to Paradise Island. Even as the resorts on the strip became shabbier we stayed in this area. But we did head out to Paradise Island and Atlantis more and more. Staying at my friend’s condo isolated us from the general decline in the area.

We hadn’t gone far along the new highway before we could see in the distance the transformation of the Cable Beach skyline. Hearing about the changing face of Nassau vicariously from my friend Rob did not really prepare me.

When we visited in 2015. the new Baha Mar super resort (budgeted at $3.5 billion) was not yet open. It’s shape was unmistakable. It was being sold as the “New Riviera” and would finally open in 2017. In 2015, the hotel and condo tower shells were up. The parking lots and grounds were in progress. 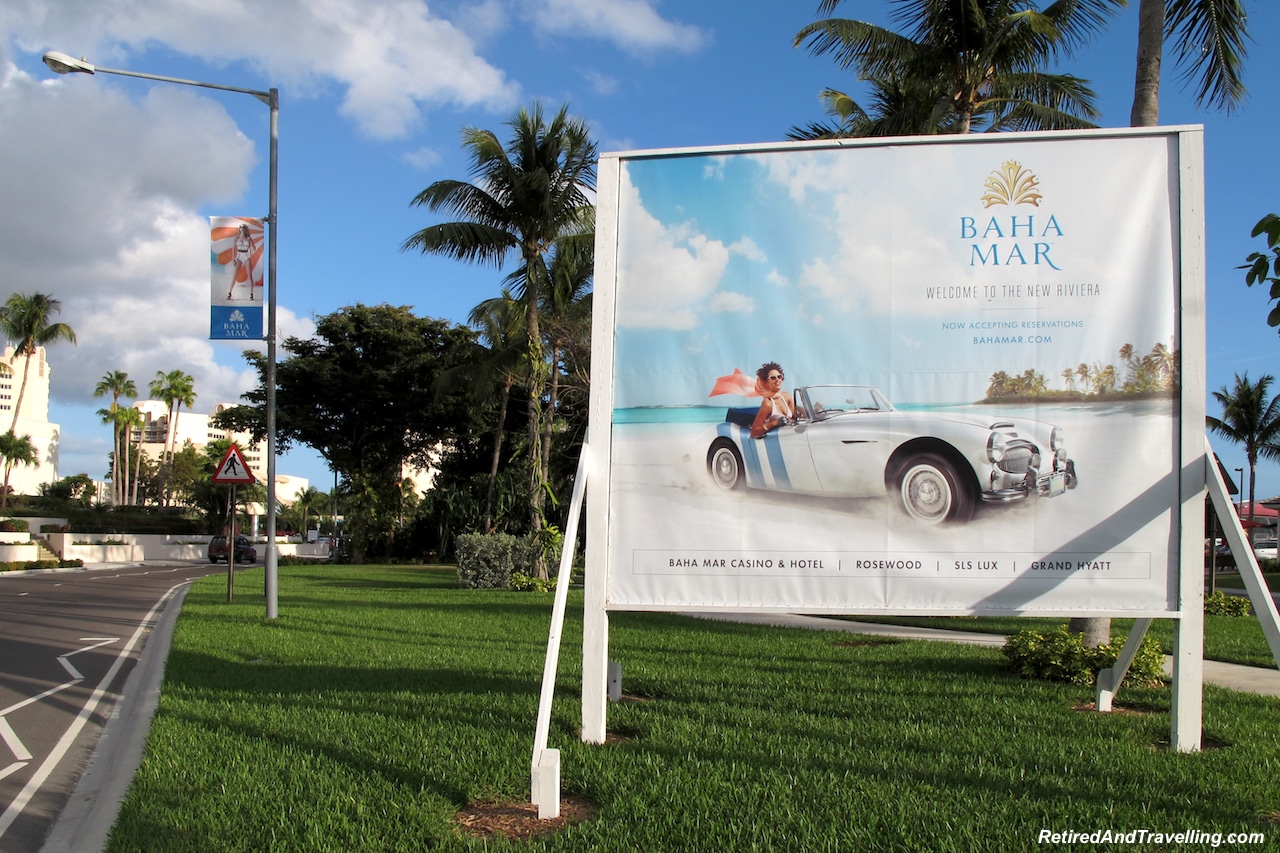 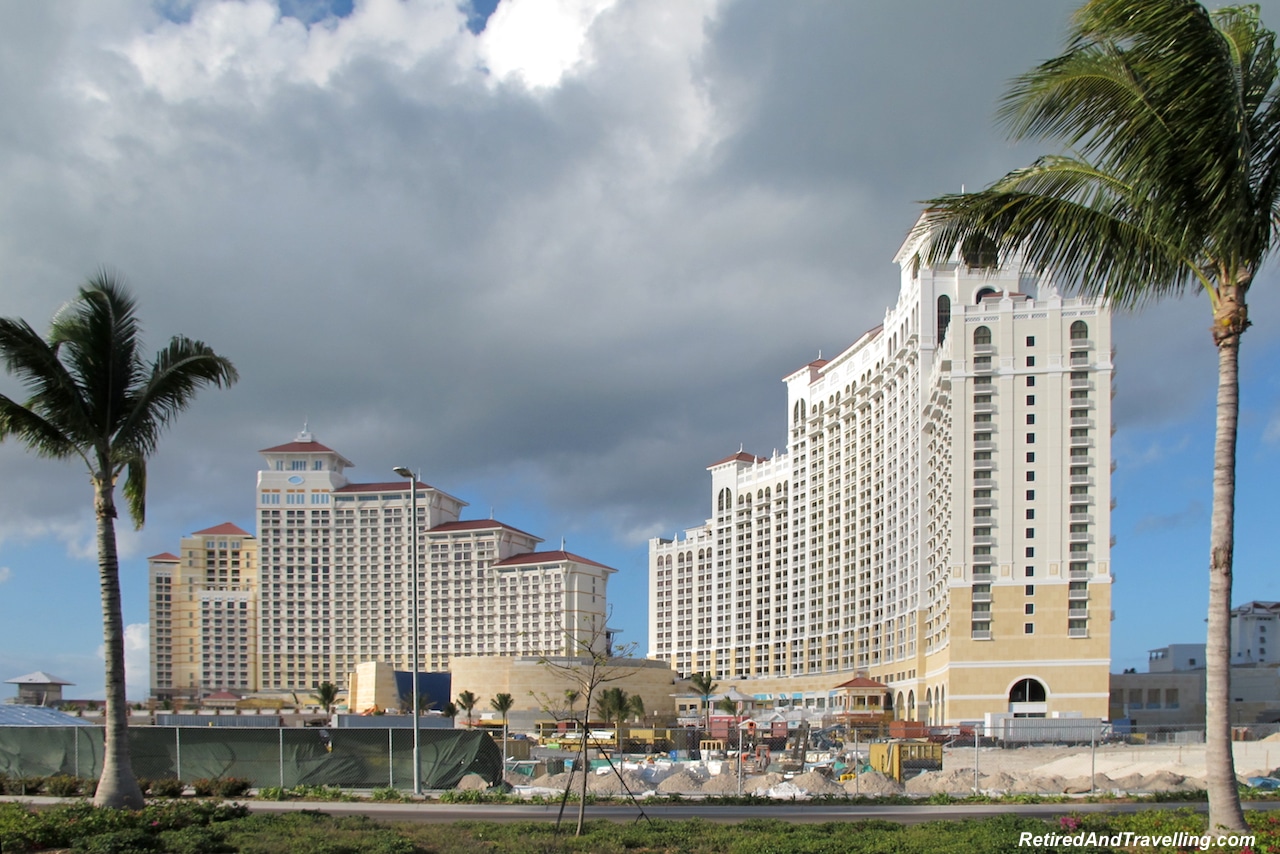 West Bay Street has been re-routed to go around the entire property. This includes the absorbed property of the Crystal Palace Casino and the renovated Melia hotel (formerly the Sheraton). With access limited to the entire site during construction, it was a long walk along the road to get to the access point for the little that was open when we visited. We got to see much of the changing face of Nassau as we walked.

Walking on the side of the road across from the resort provided us with a meandering path through the grass. There were various benches, seating areas and a conch shell tree. The path was cement with creative “art” embedded at regular intervals. 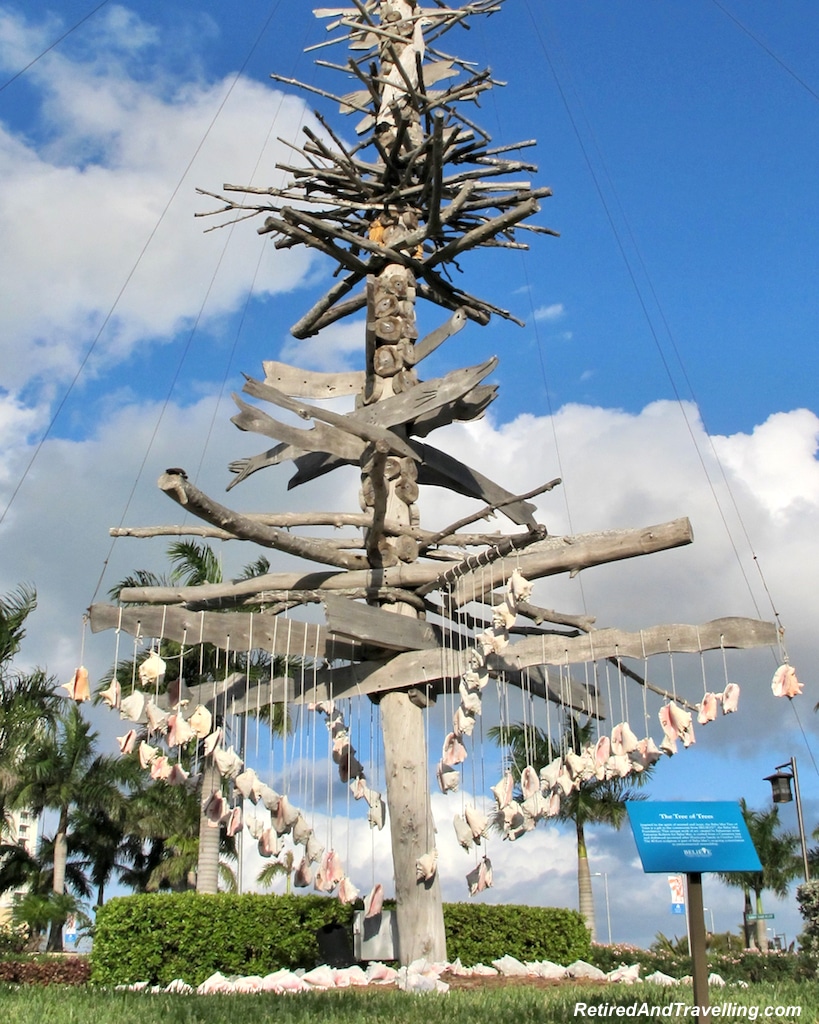 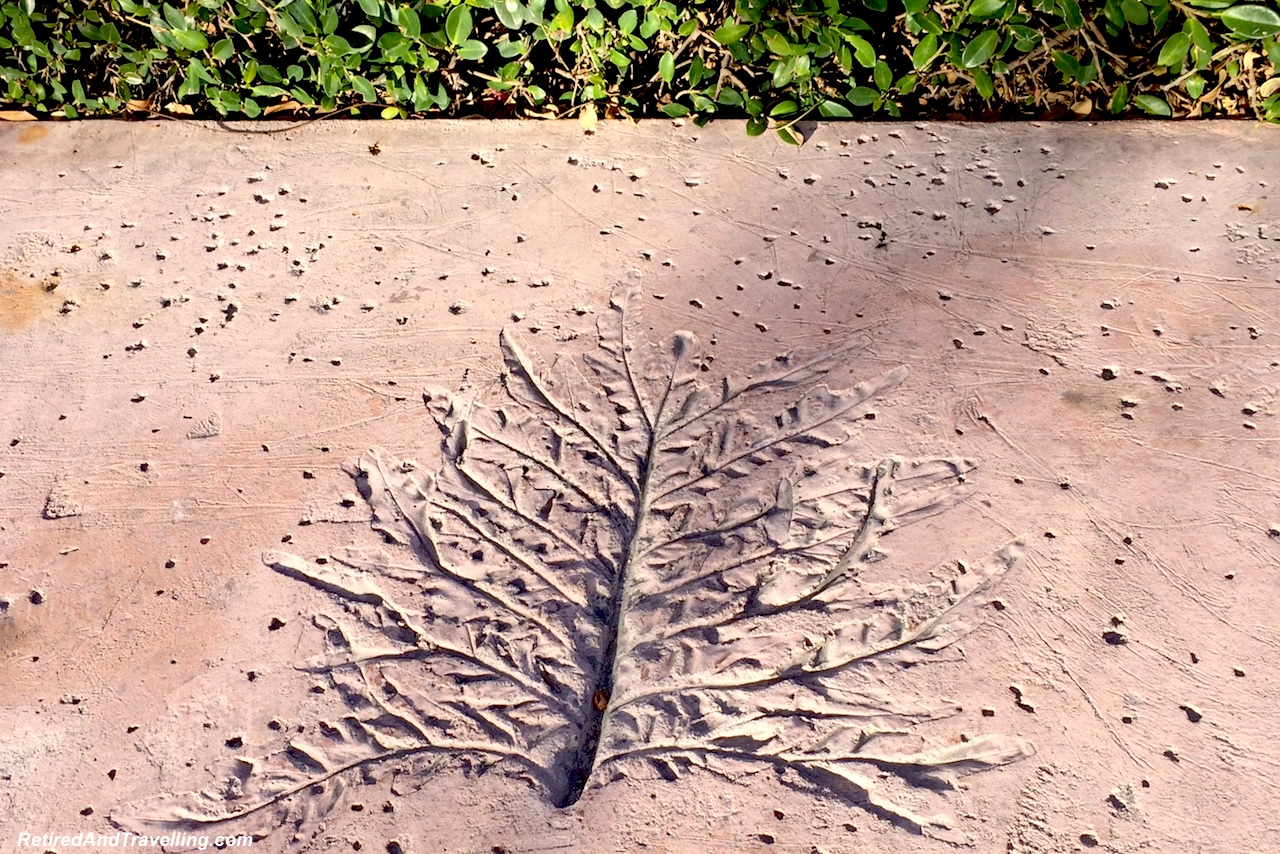 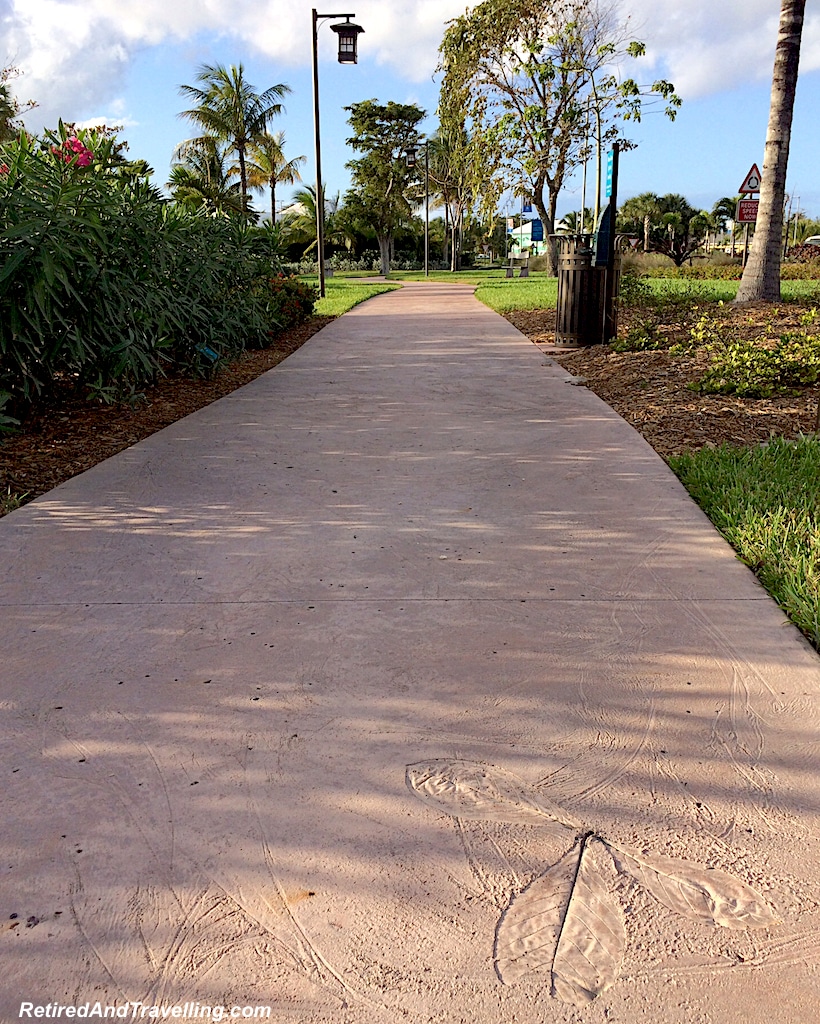 You could also see the vastly expanded golf courses built for the resort. It spreads along West Bay Street. There are underground tunnels and bridges to keep the golf carts off the roads. It is said that this will be the best golf course on the island when it opens. I am sure that Tiger Woods would want to dispute this with his Albany Resort and Golf Course built a few years ago.

Living Beside The Baha Mar

Our condo was right beside this new BaHa Mar resort and my friend watched it grow. The only thing marring the shoreline is the old dilapidated shell of the old Rock ’n Roll bar that remains standing between our condo and the new resort. We wondered if they had held out too long for a better price. But it appears that selling this piece of land may be challenging due to some concern about the rightful ownership. For the time being, everyone will have to ignore this eyesore.

All beaches are free in Bahamas. We easily walked along the beach from our place, past the new resort and finished up at the Starbucks or bars at the Melia. Walking along the newly created beach, we could see the calmer waters created by the new breakwater. A long pier jutted out into the sea protecting the new eco reef that had been created. 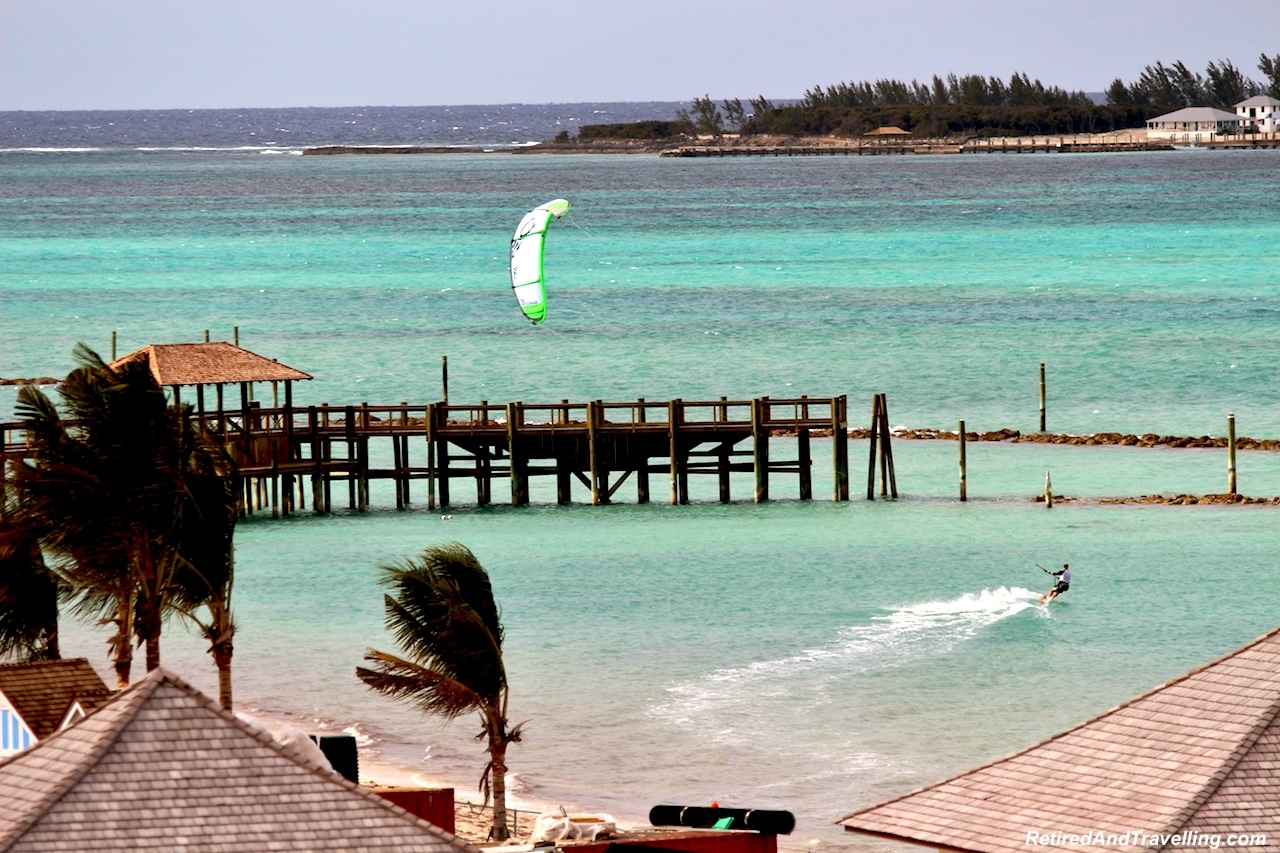 The Face Of Nassau Is Changing

When the BaHa Mar resort developer moved West Bay Street, they moved the banks out to the new street. The local Bahamian bank is there as well as the Caribbean branch of Canada’s Scotiabank. When we walked the long loop around the resort property, we finally came to the new and improved straw market. While the buildings have been gentrified, the local shop owners practiced their sales pitches just the same way. But we were not buying on day 1. Bypassing the daiquiri bar by the straw market, we went in search of the Starbucks in the Melia. A girl needs a reward after the long 4,000 step walk!

The face of Nassau is changing. New developments are centred at Cable Beach rather than around Paradise Island. The developments around the Atlantis property continue to expand but no longer with the same impact on the skyline.

We noted that the commercial container port has been moved out of downtown. It was likely done to make room for the increased cruise ship berths. There is talk that this will also mean new condo development in the port area.

The Baha Mar Resort Will Bring People Back To Cable Beach

The locals we talked with were happy with the new infrastructure and increased tourism forecasts. But there was some worry that progress will come with a cost. Some merchants we met in the Cable Bay area were planning to expand. They hoped to capture some of the new visitors when they wander off the new resort complex or move into the new condo development further up the Cable Beach coast. The face of Nassau will continue to change.

At the condo we can hear construction noise during the day as the workers hurry to finish. Last night we could see the light from arc-welding still in progress on the buildings. Soon that construction noise will be replaced with the sound of happy vacationers. The changing face of Nassau will draw them in!

It will be nice to have the Cable Beach strip back open for business. There will be a lot of new options for food and entertainment. And employment for the locals! We hope to be able to avoid the long drive in downtown traffic to get to the casino at Atlantis.

Once I get a chance to visit the new Baha Mar facility – you can check back here for a more thorough review!
Maybe we will be lucky enough to be among the first to visit, when we stop in Nassau port on our Caribbean cruise this April.

Do you plan to visit the Baha Mar Resort? What do you think of the changing face of Nassau? 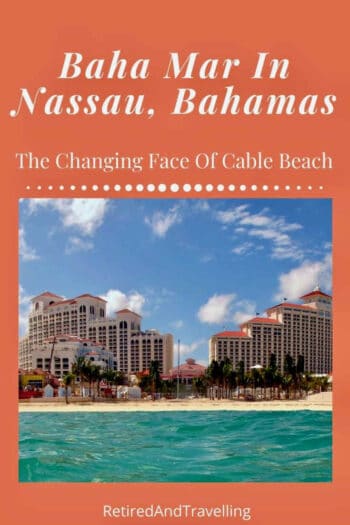 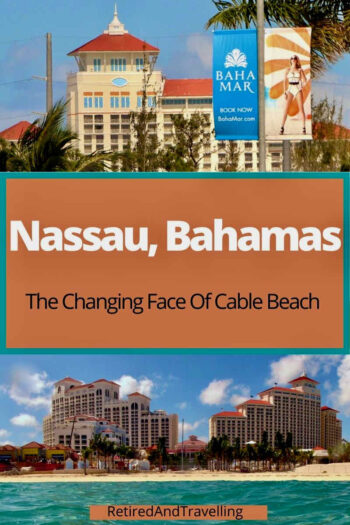