Top Toronto Festivals Can Be Found Throughout The Year

Scrolling through the TV channels in the wasteland that is summer tv, we stumbled across a Rogers Cable show listing their view of the top Toronto festivals.  We have done all of these over the years except #9 and #10 and agree they are worth putting on the calendar.

We have not done either one of these.  Sorry!

You can find live outdoor music entertainment all over Toronto in the summer.  One of our top Toronto festivals is the Toronto Beaches Jazz Festival.  For 9 days, a broad set of Jazz concerts can be found in the east end of downtown in various venues.  The festival culminates in 3 nights of pure street entertainment.  With Queen Street East closed off for 17 blocks, you can find performers set up almost side by side along the whole road – alternating in who is playing to limit as much as possible the bleed-over of sound from one band to the next.
While this festival started as a “jazz” festival, today you will find a wide range of performers although jazz in all of its infinite varieties is well represented. 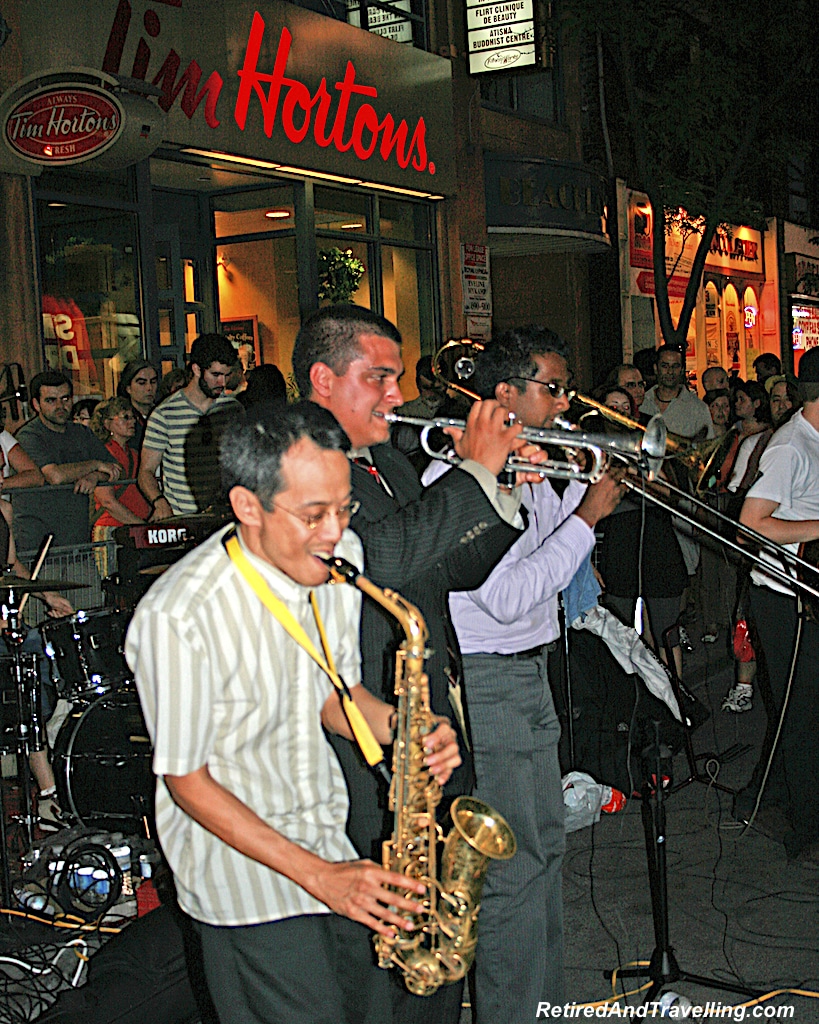 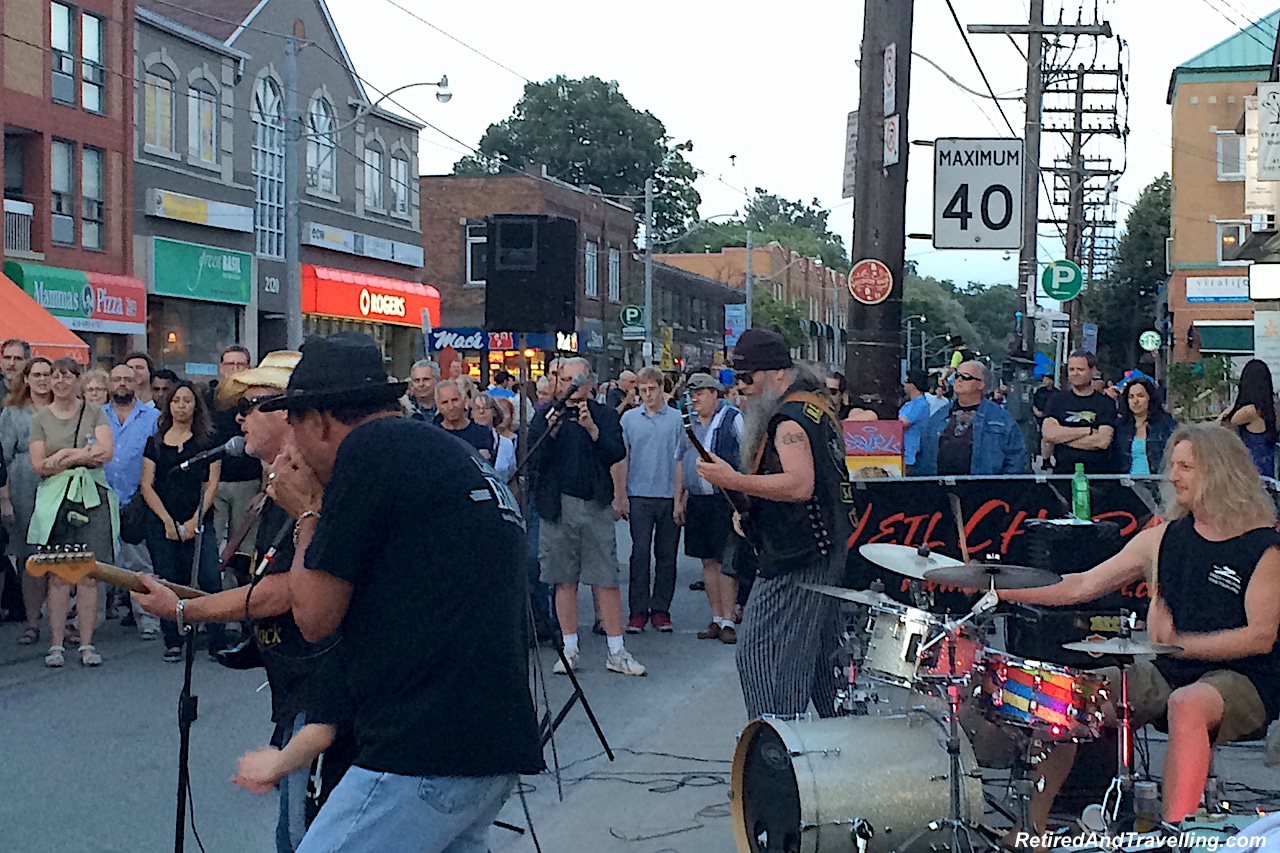 If you are going to miss the Beaches Jazz Festival check out the dates for the TD Toronto Jazz Festival.  Held usually just before the Beaches festival, this one combines a variety of outside and inside venues over 2 weeks.  The outside venues are more close to the centre of downtown Toronto with the inside venues around the downtown area.  No matter which jazz festival you pick, you will not be disappointed.

Buskerfest is an international festival devoted to buskers.  It brings out performers with wide ranging skills – fitting their bodies inside incredibly small spaces, juggling, fire eating, walking on stilts and so on.  The entrance fee all goes to charity (not to pay the entertainers) so the performances survive on good donations from happy visitors.It is great entertainment through the evening and into dark.  There are generally one or two spectaculars put on after dark (check the schedule).  These are always worth waiting around for. 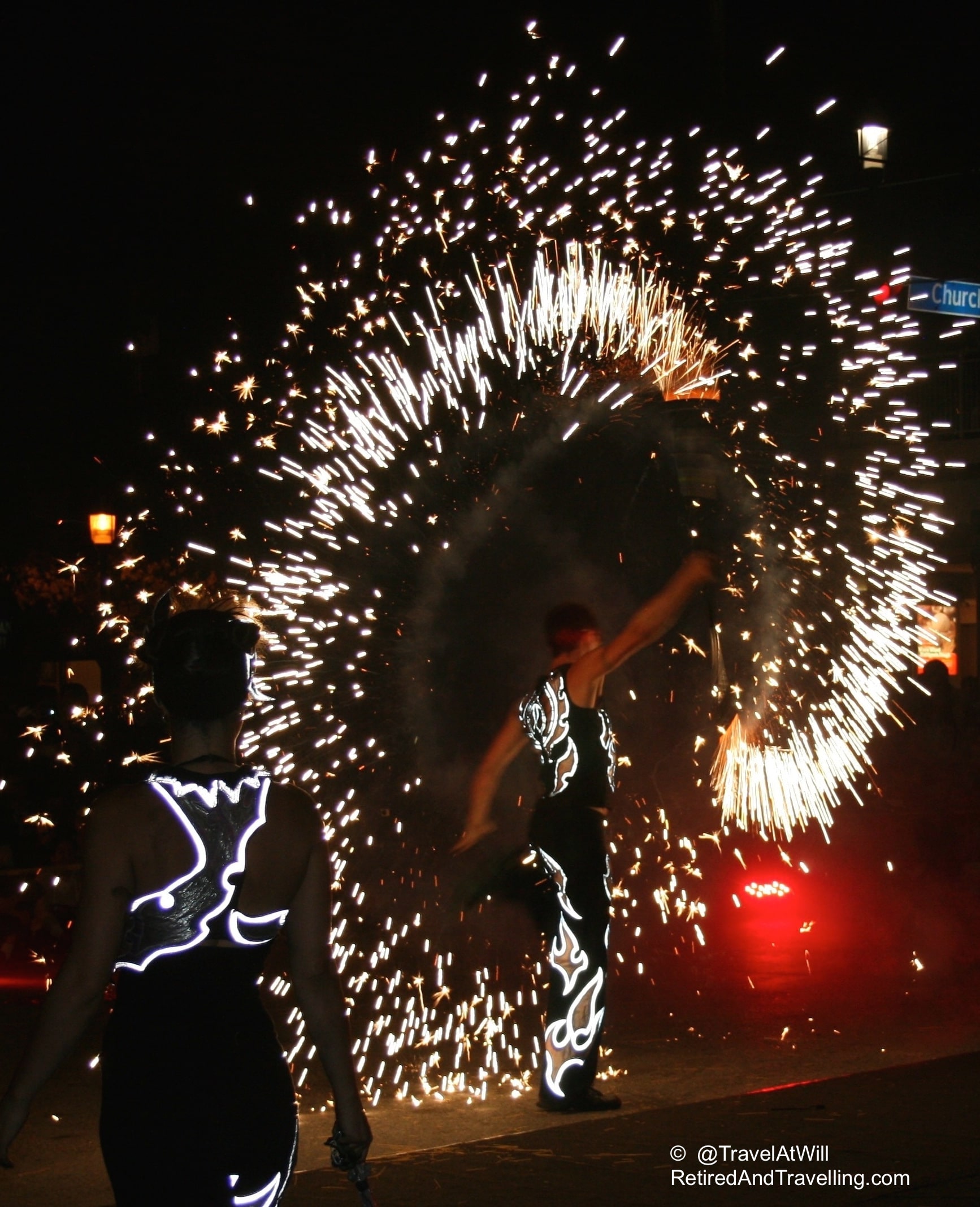 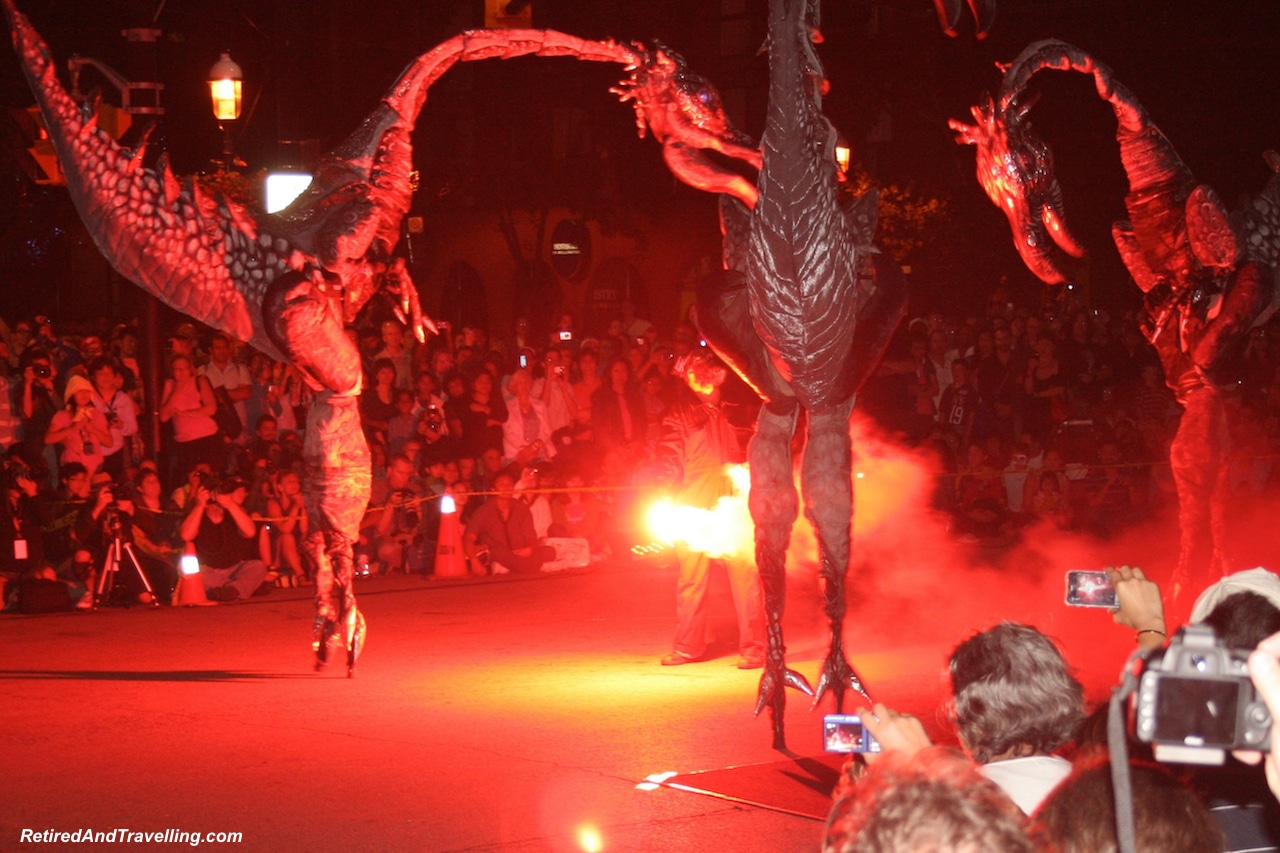 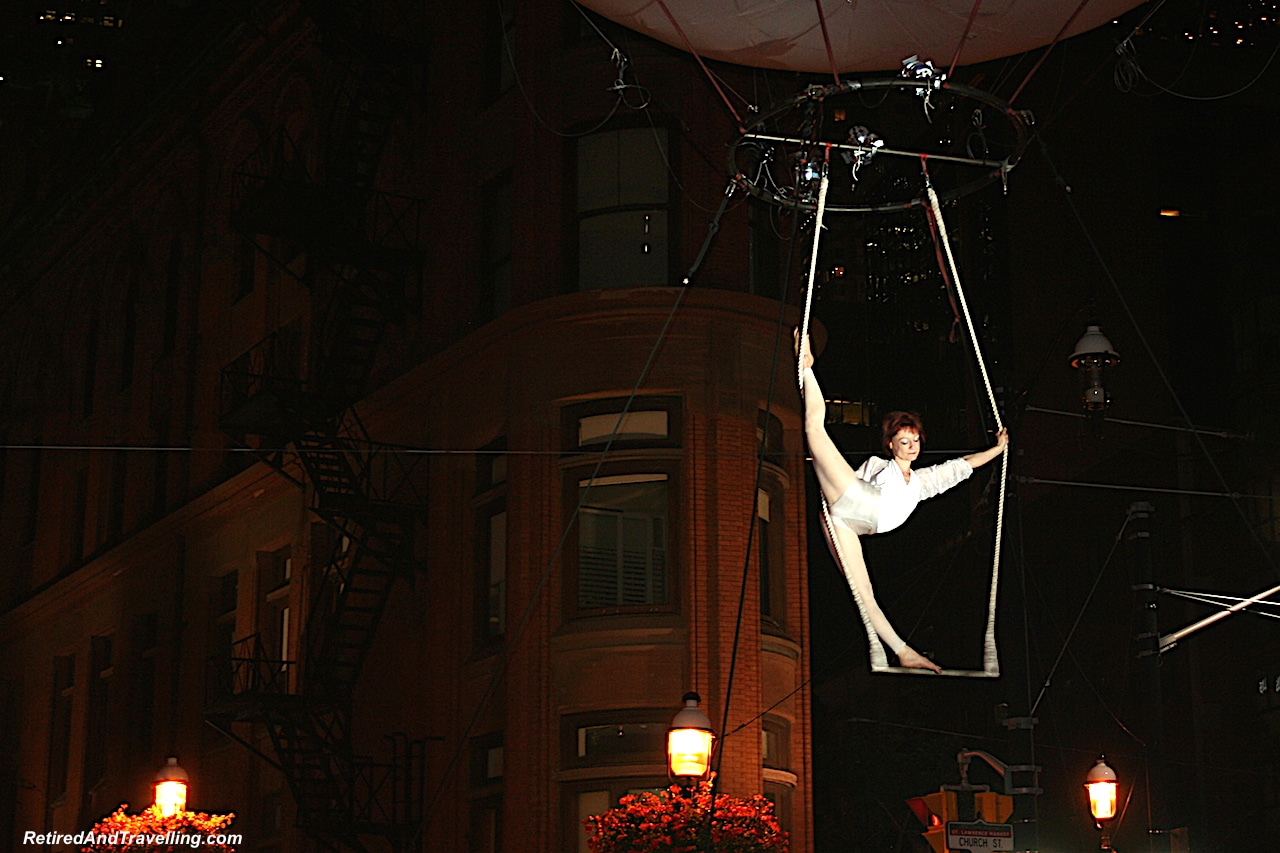 #6 – Toronto Nuit Blanche (in the winter, a fun all night arts exhibition throughout the city and its streets)

Before the city of Toronto gets too cold to run around in at night, Nuit Blanche offers at chance to explore the area of West Queen to see the outdoor art exhibits.  Art galleries in the area open their doors to provide additional displays and there are always lots of options in this part of town for good dining before or after your art crawl.

Pride Week is an opportunity for the Toronto LGBTQ+ community to celebrate.  As in all other major cities, Pride Week culminates in the Pride Day Parade.  We were late comers to this festive event but found it to be great entertainment in addition to a real statement about how far this community has come in general acceptance in Toronto.  The last time we went, we took our then 19 year old son – to open his eyes.  We have no pictures because he did not want this recorded!  But he walked away with a better appreciation for the community and somewhat surprised at how open minded we were.  It is always interesting to see your children start to see you as people and not just as straight, boring “mom and dad”.  Consider this for your top Toronto festivals list.

#4 – Taste of the Danforth (early August)

The Taste of the Danforth has grown from hosting 5,000 to over 1.5million visitors over the 3 days when they close Danforth Street for 17 blocks to host this annual festival.  While it originally focused mostly on food booths, it has grown to become a celebration of both Greek heritage and the broader multicultural nature of Toronto.  If you are into good local food, put this one on your top Toronto festivals list. 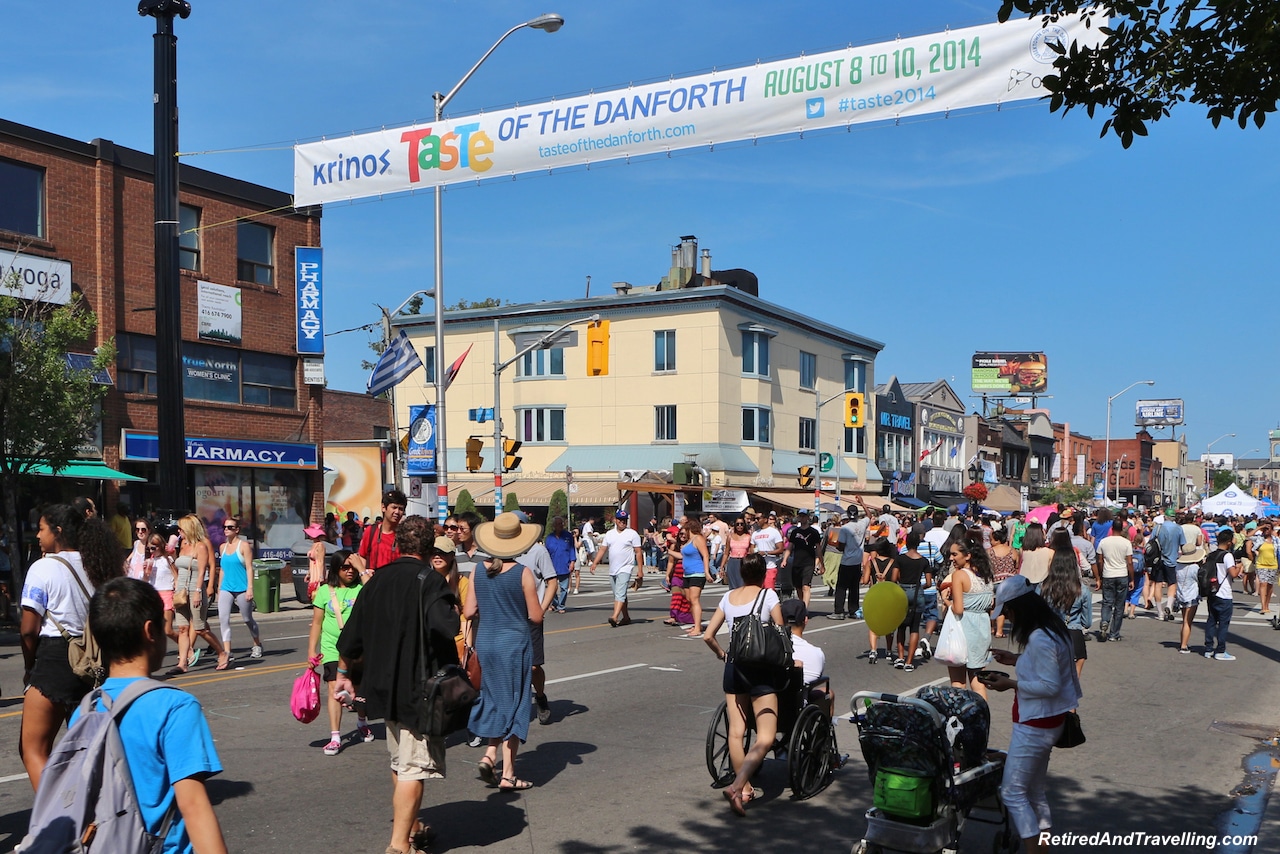 There are 3 main stages along Danforth that offer a wide variety of entertainment over the 3 days – from belly dancing to various kinds of music.  There is entertainment for everyone of all ages. 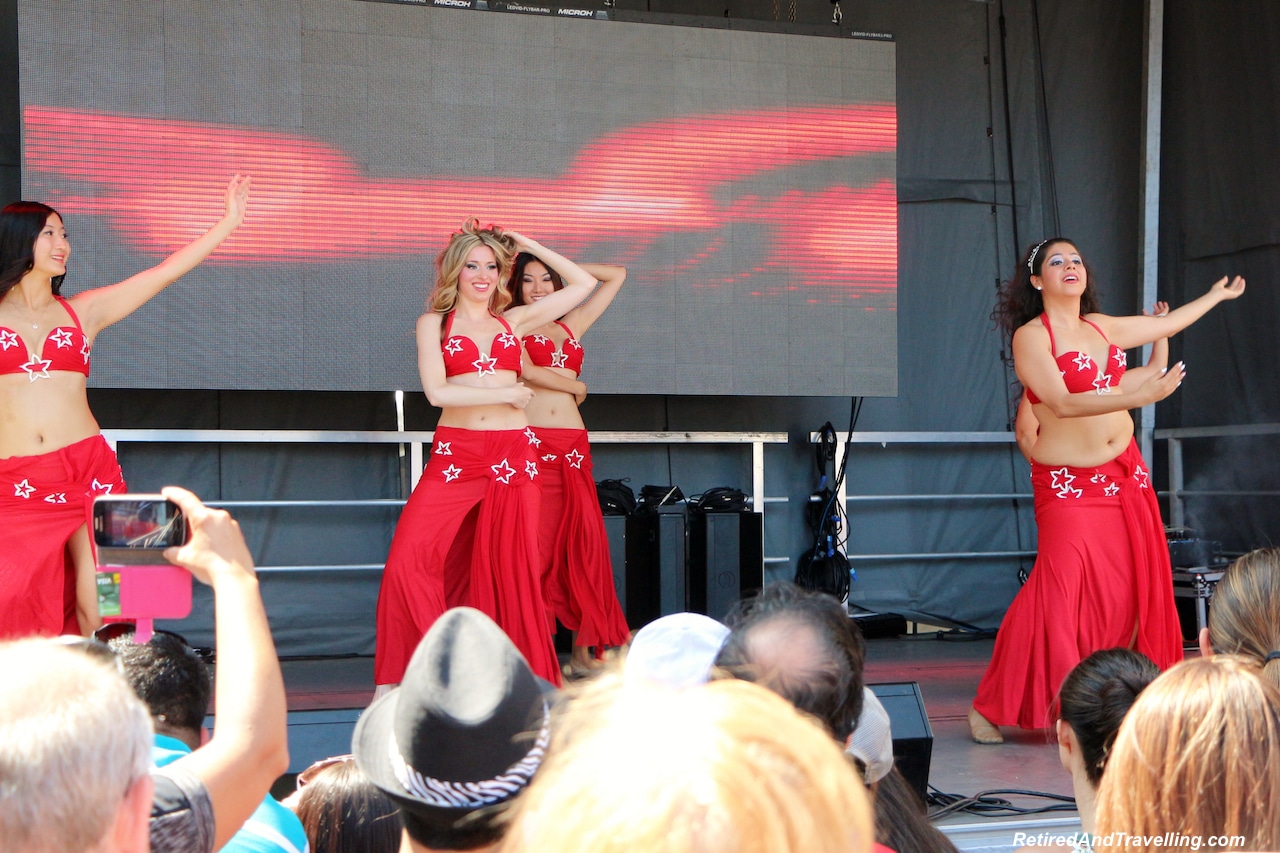 The festival was initiated as a celebration of food and food remains a big part of the “Taste” of the Danforth.  While Greek food is probably the predominant food you will find, there is something to tempt just about everyone.  Most of the food is served in front of participating restaurants as a way to tempt you to return if this was not already a favourite food stomping ground for you. 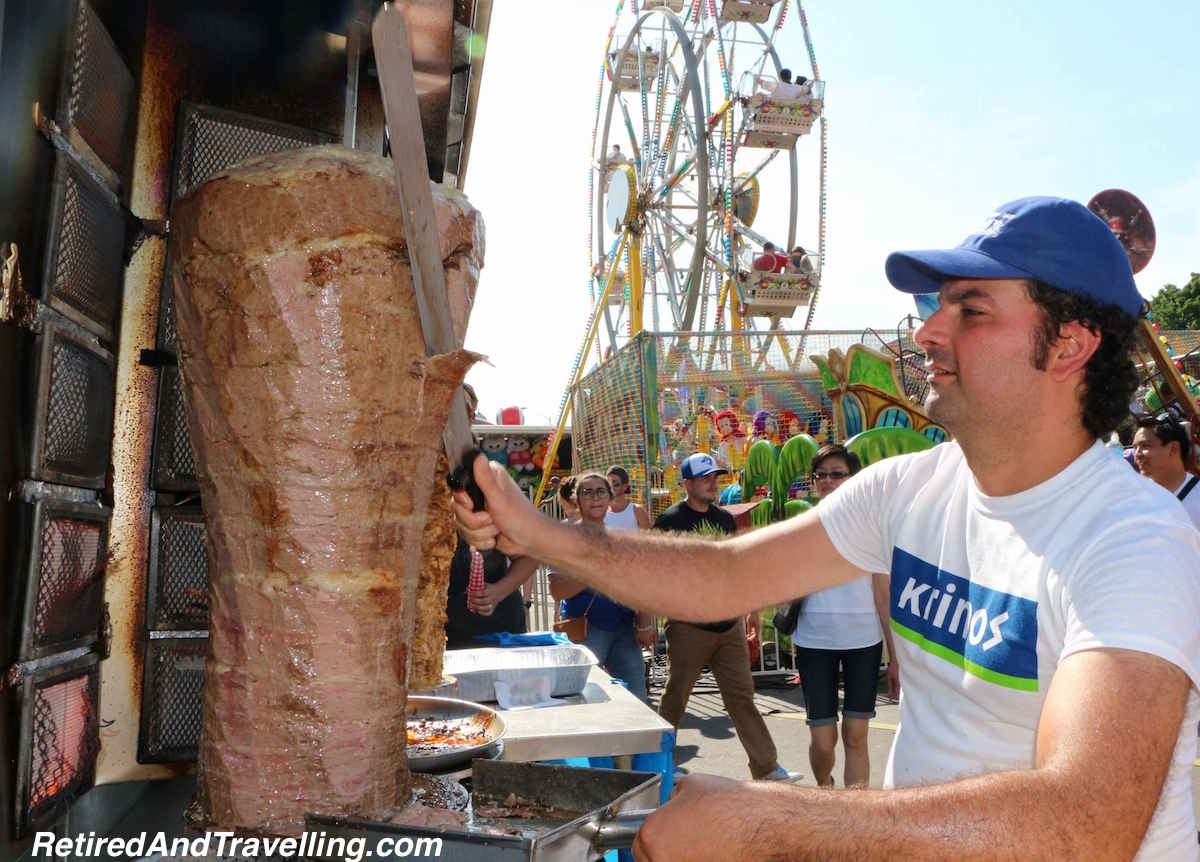 Carabana celebrations happen for weeks.  While the big party is held on the Toronto Islands, there is as much of a party that surrounds the Carabana parade to close the festival. 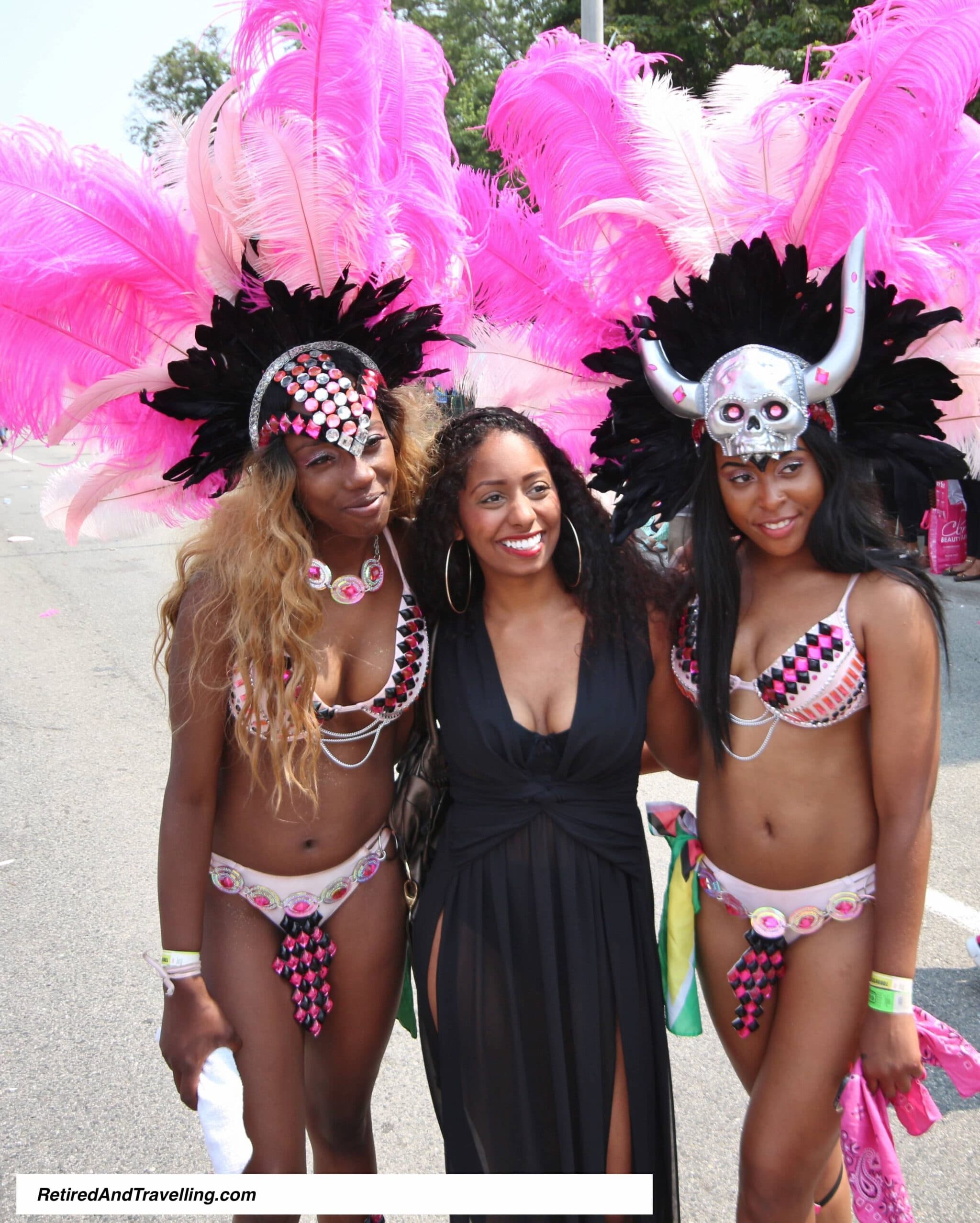 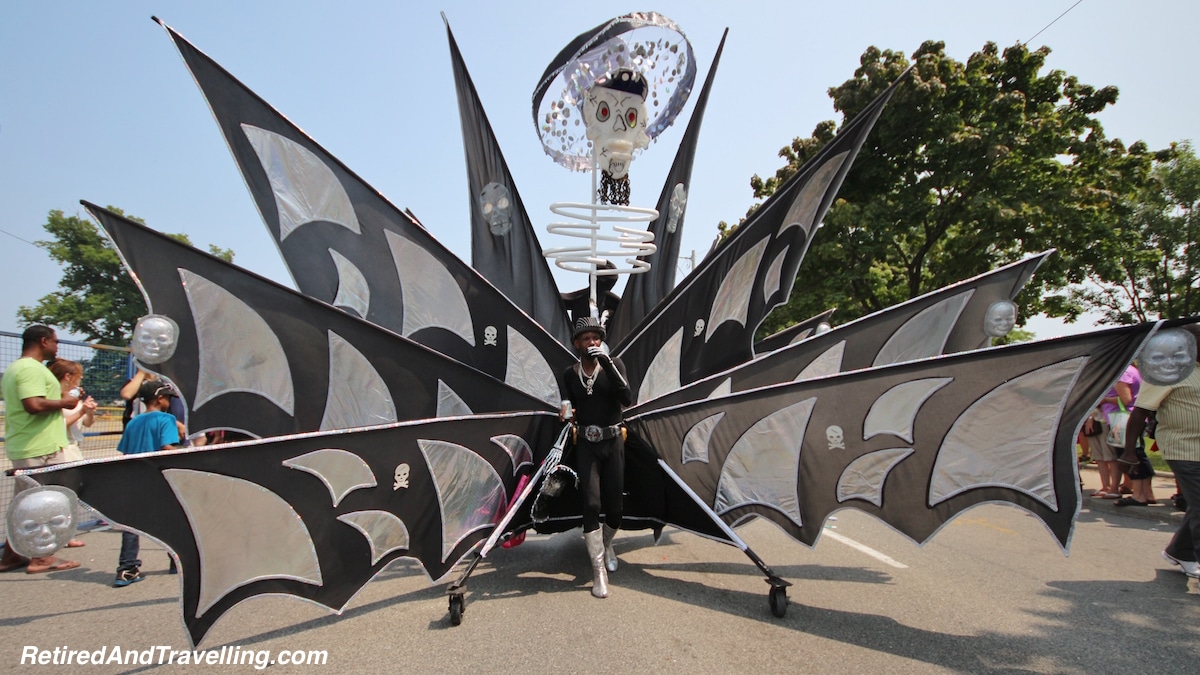 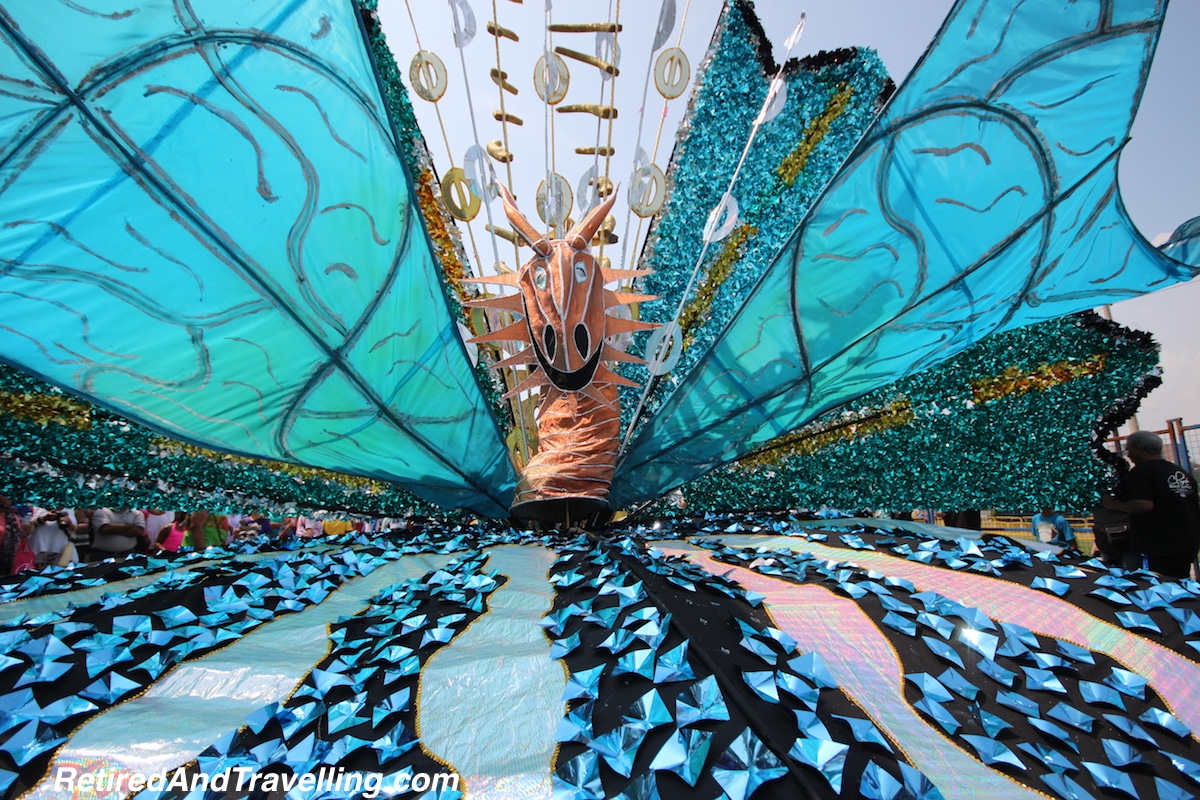 With crowds lined up along the whole parade route, there are lots of opportunities for the spectators to get in the spirit. 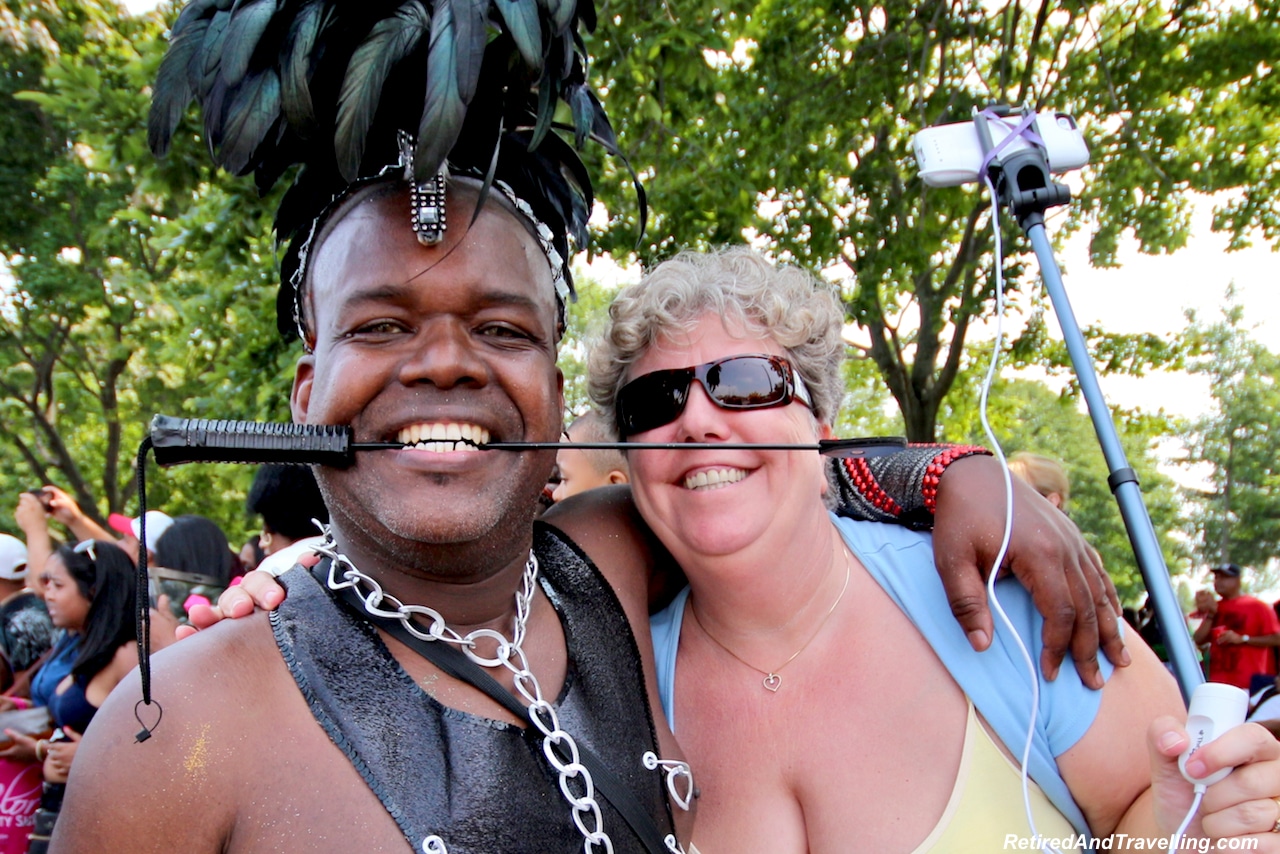 David attended the very first TIFF held in Toronto (yes – he is that old)!  TIFF is held in September.  We are generally away travelling in September so we have not attended in recent years.  It is a great time to see the new films and to spot stars wandering about Yorkville!

#1 – CNE (in August, culminating with the Air Show on Labour Day weekend)

A visit to the Canadian National Exhibition (CNE) is Toronto’s signal that the summer is coming to an end.  As a kid, this was the only amusement park game in town.  We knew that after “the Ex”, we would be back to school.  They built the huge new amusement park at Canada’s Wonderland (open all summer).

The Toronto CNE rides and games still draw big crowds for kids of all ages.  The expanded indoor space provides lots of room for exhibits and special shows.The Food Building has always been a big draw offering a chance to sample a broad variety of food.  And traditional fair food can be found everywhere you look.There are definitely great reasons to visit the CNE. 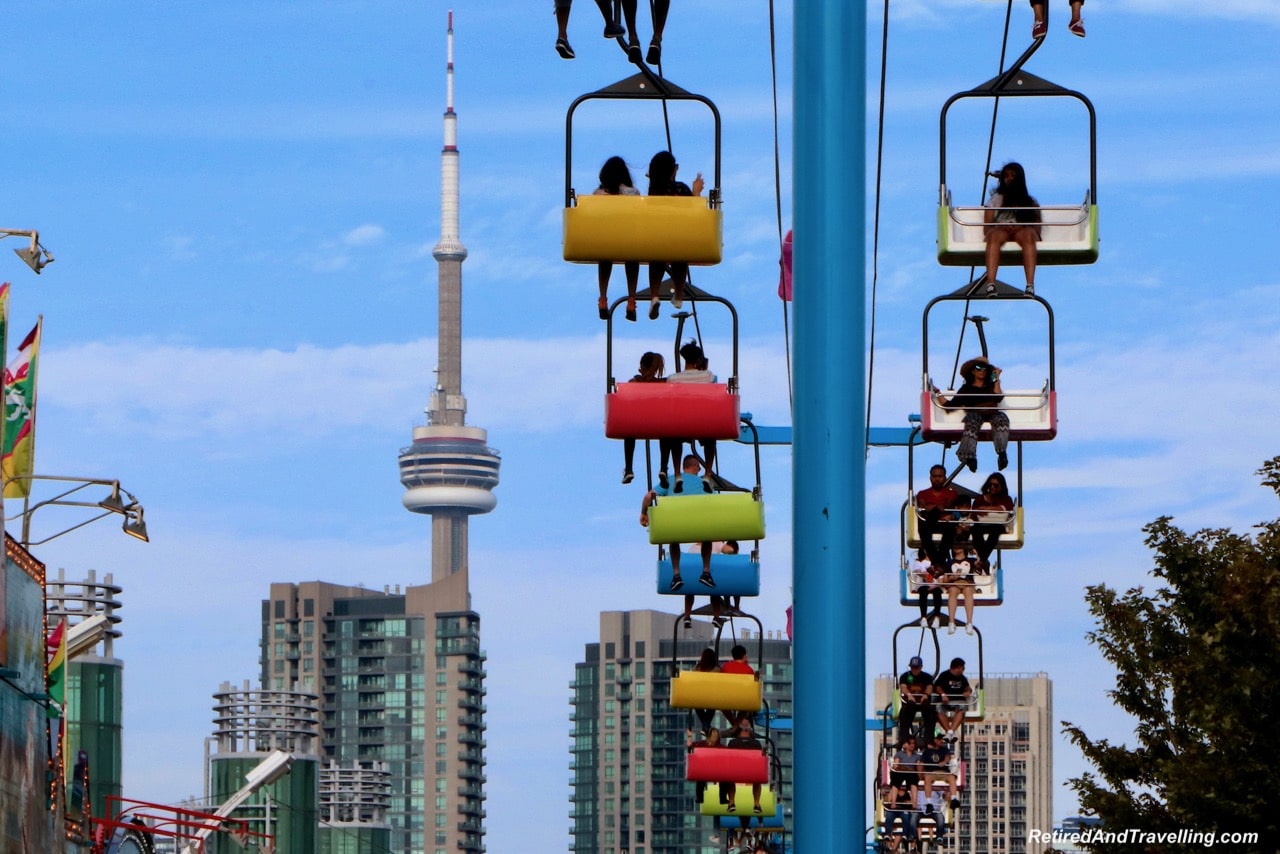 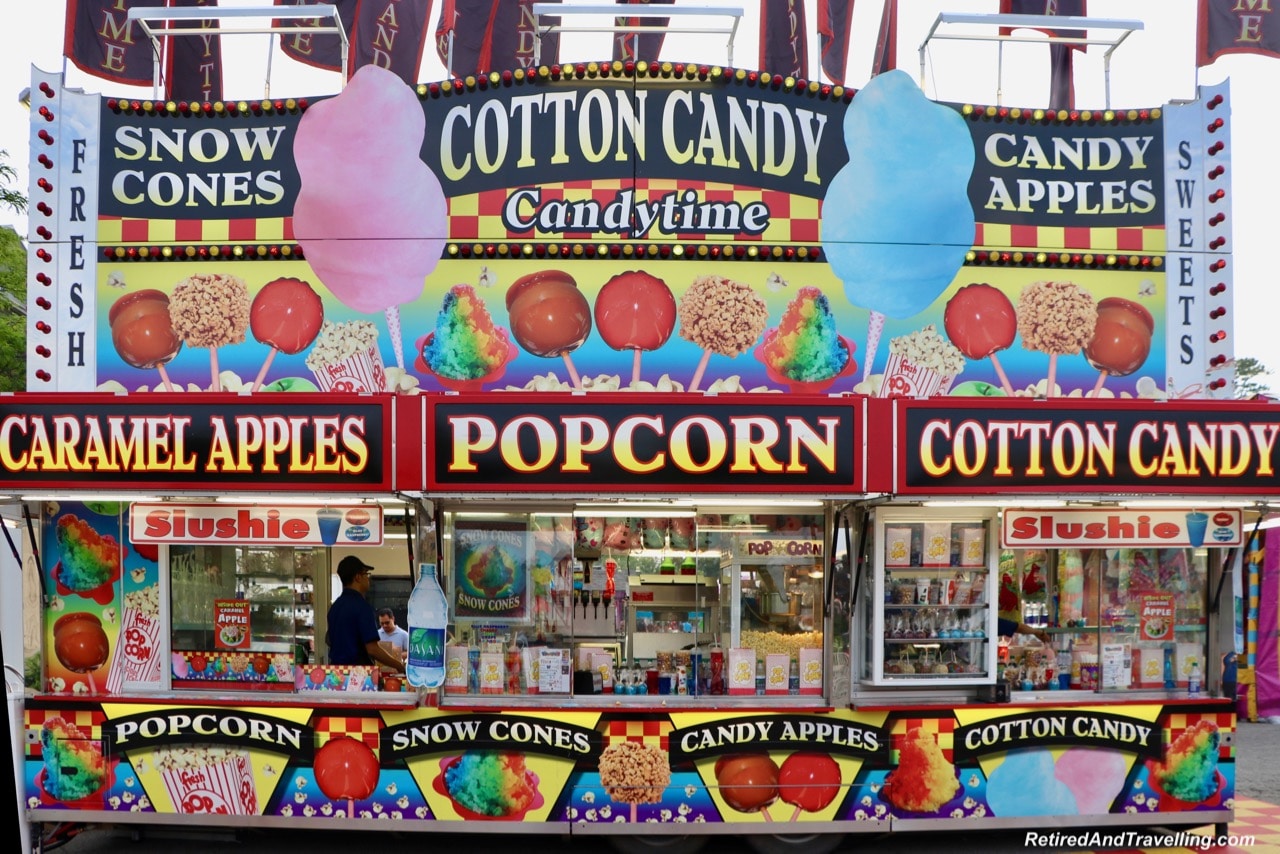 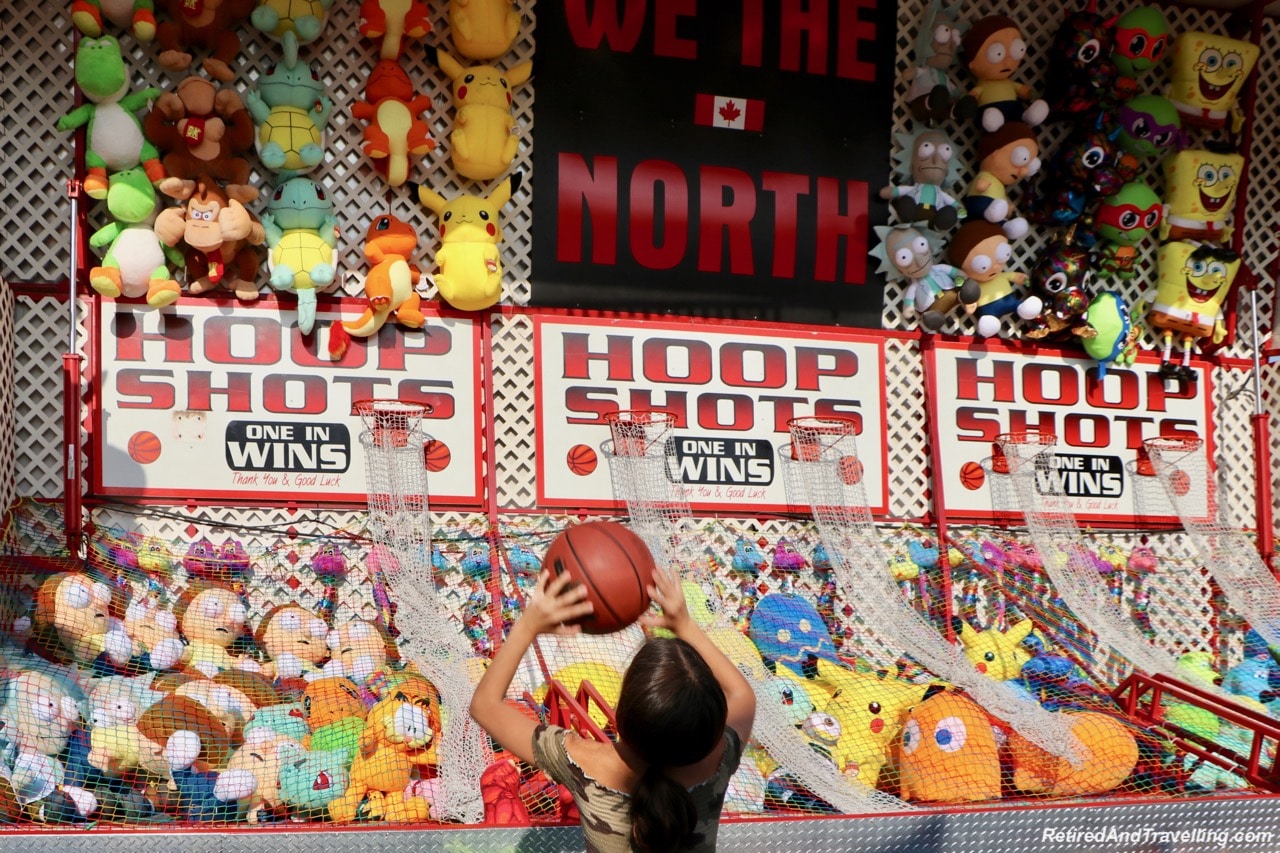 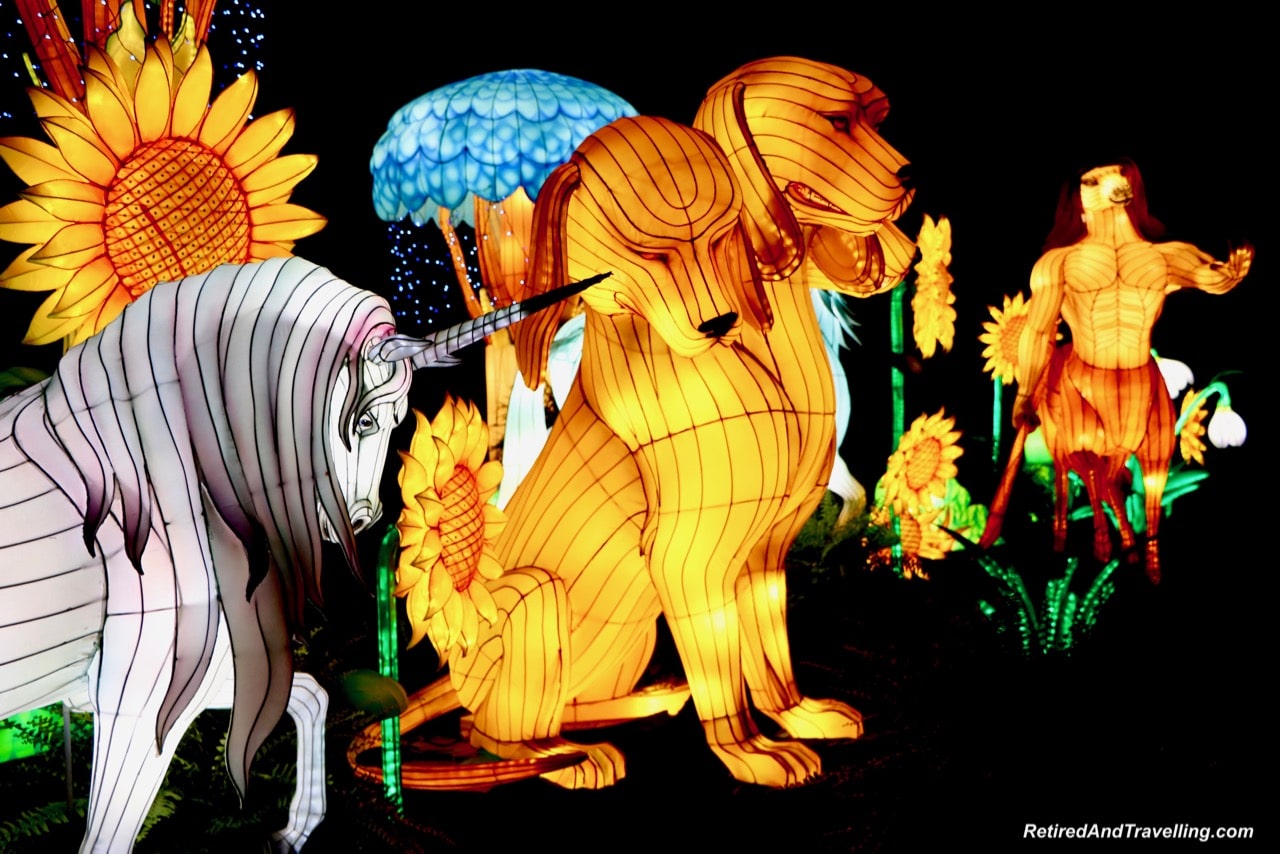 We like to go back to the Toronto CNE to see what is new.And to remember our childhood past.  But the annual big Toronto Airshow at the CNE is still a big draw.  From our condo on the lake, we can easily bicycle along the lakeshore for a view.  Or we can head up to the 47th floor roof terrace and feel even closer to the planes!  The sound of fighter jets still makes my blood soar! 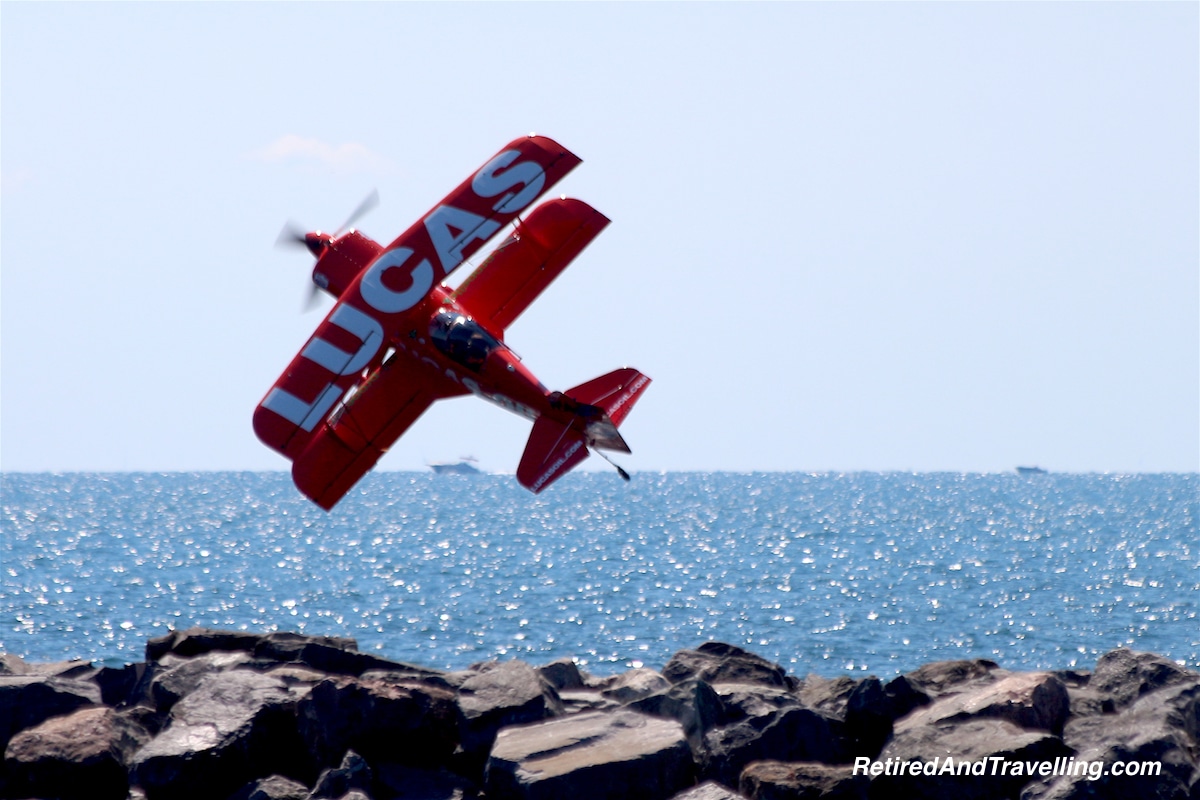 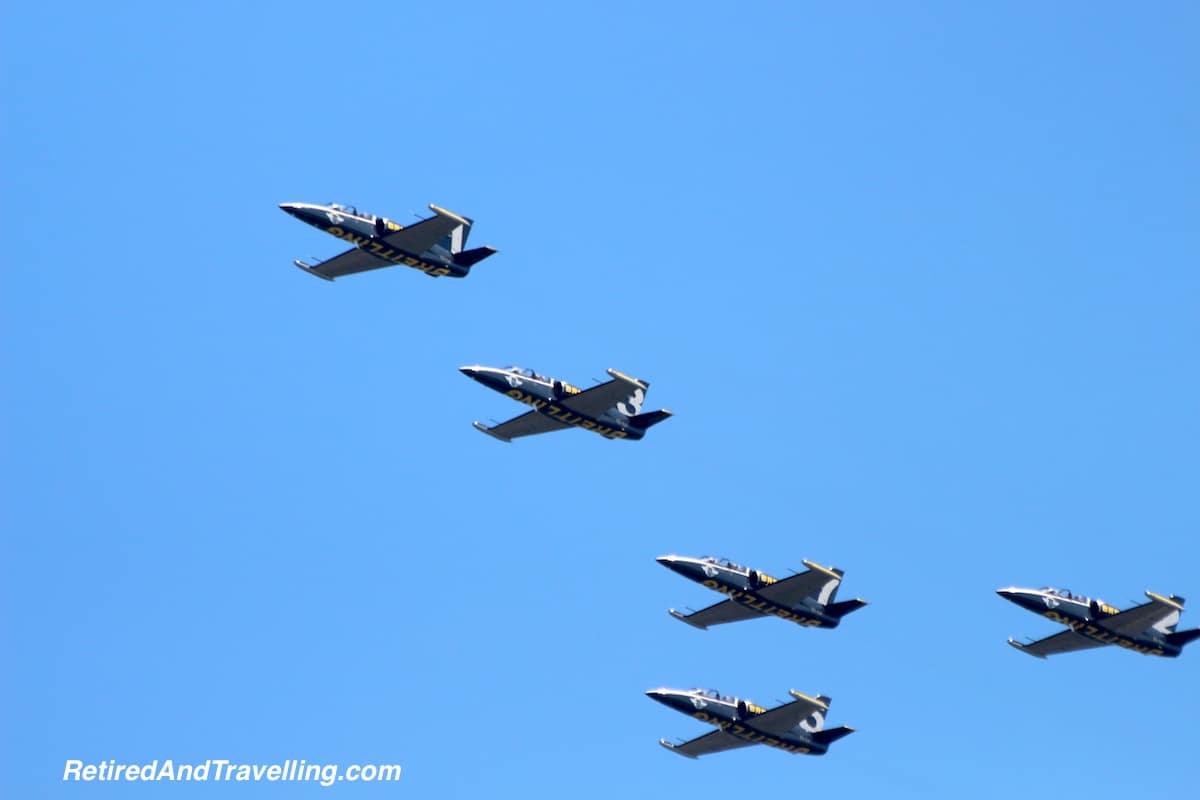 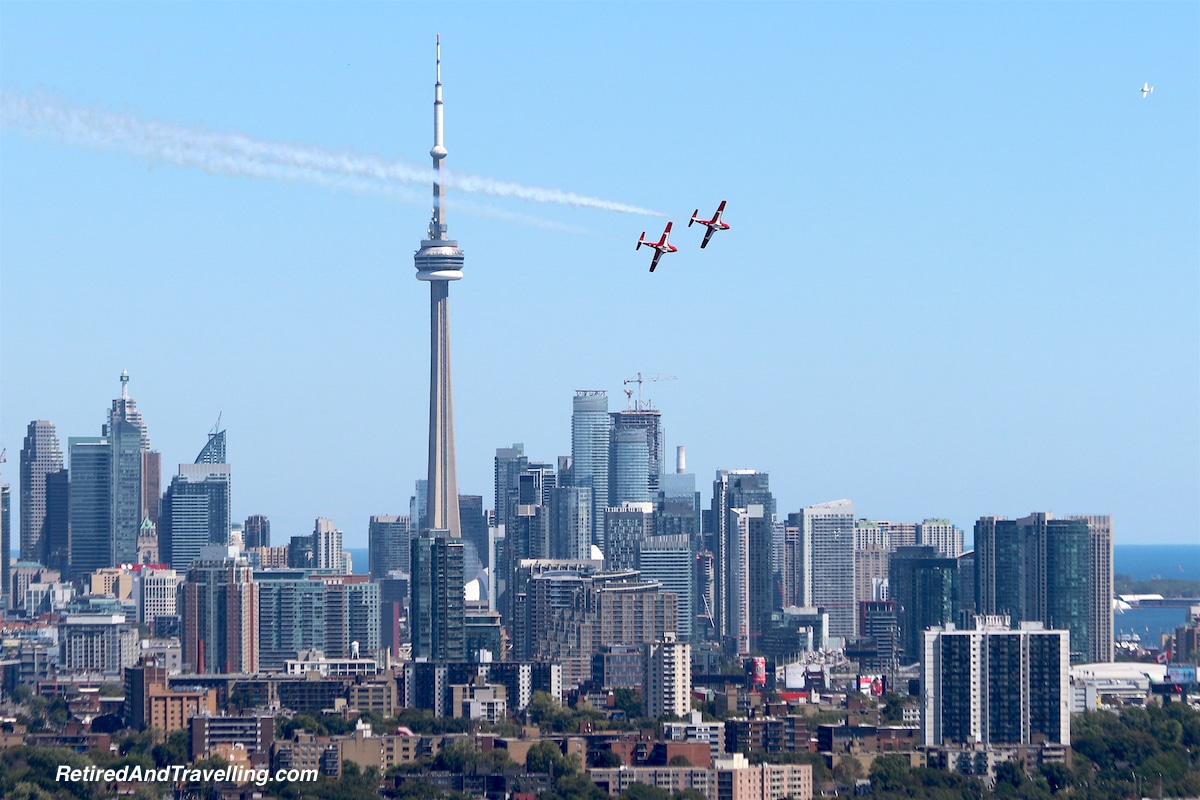 So Many Things To Do In Toronto

One of my favourite things to do in Toronto is the Honda Indy.  I love the vroom vroom roar of the engines – almost as much as the sonic boom of the fighter jets!  A few years ago, David took our two then-teenage boys to the pre-race festivities.  They saw a bit of the warmup runs but were more interested in looking at the cars and the girls!  In time they might even develop an interest in the real car race! 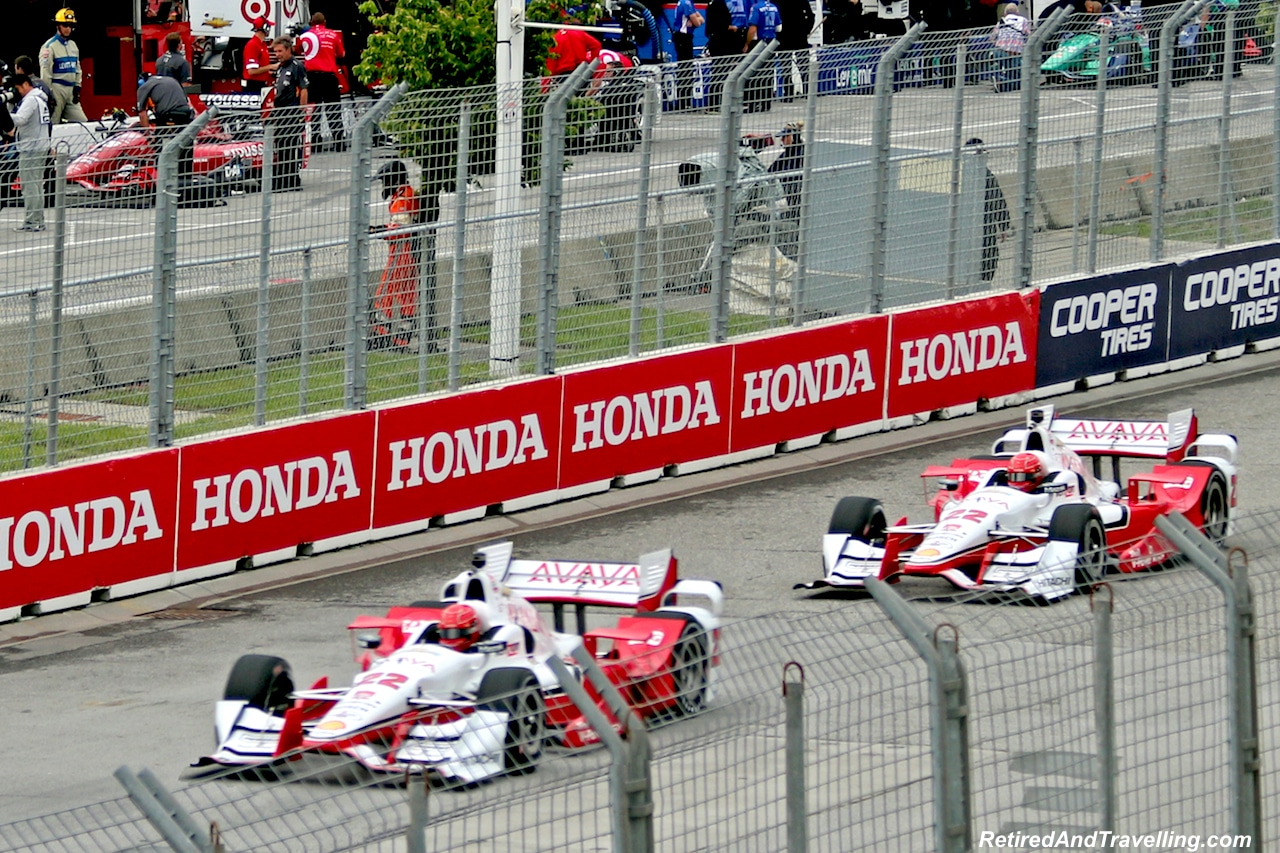 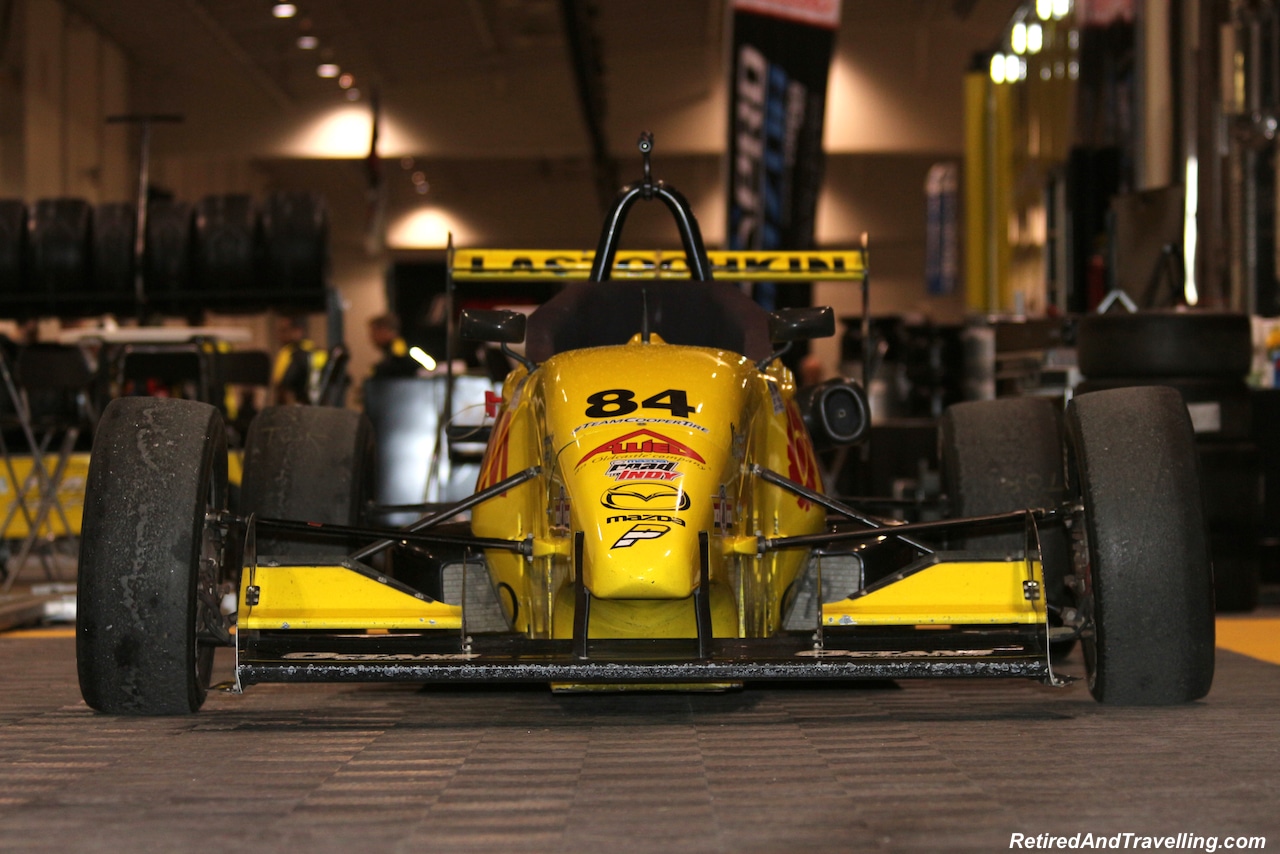 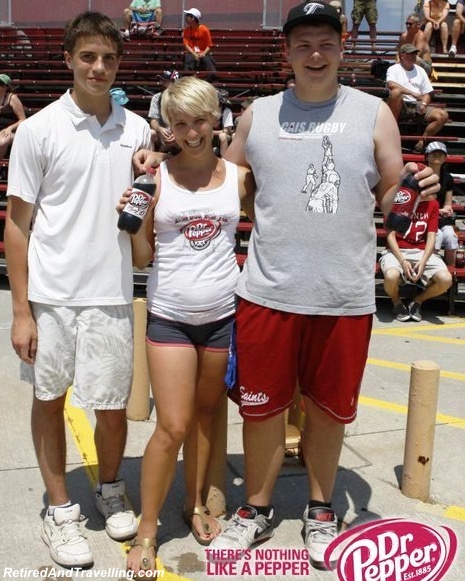 We will blog as many of the top Toronto festivals as we are in town for!  Luckily we live downtown by the lake so many are within biking distance.  There are many other Toronto things to do that aren’t on the list.  Plan a long visit to Toronto or plan to return often!

Did I miss any you would add to the  top Toronto festivals list? 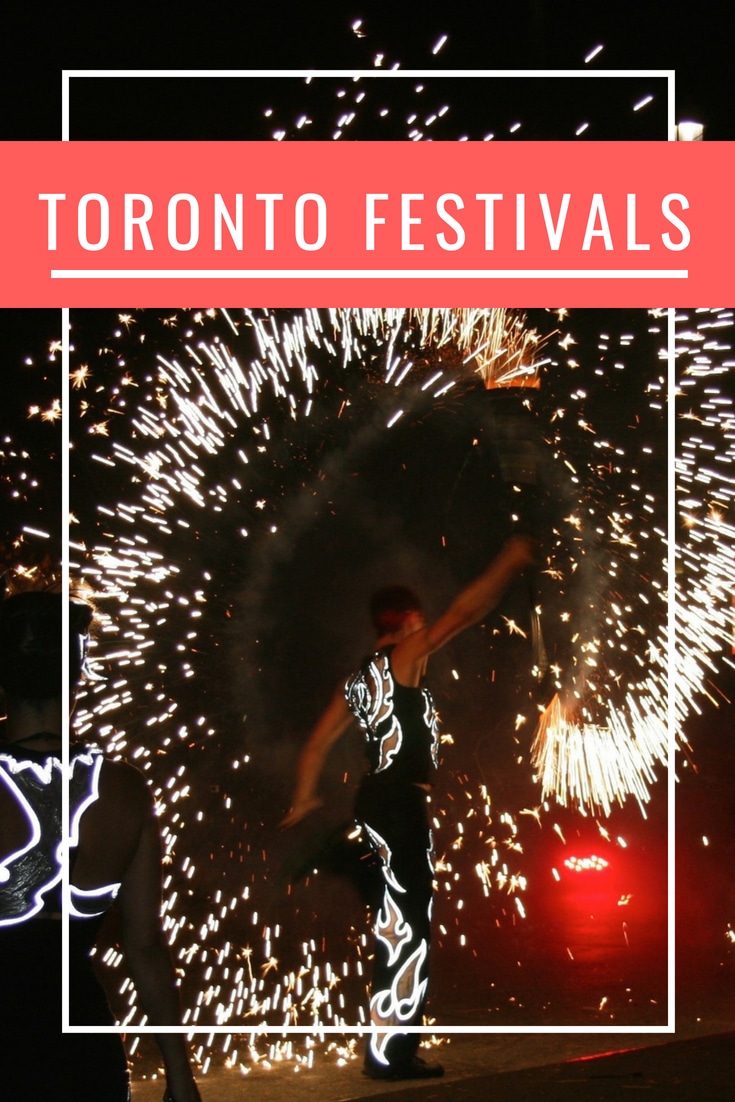 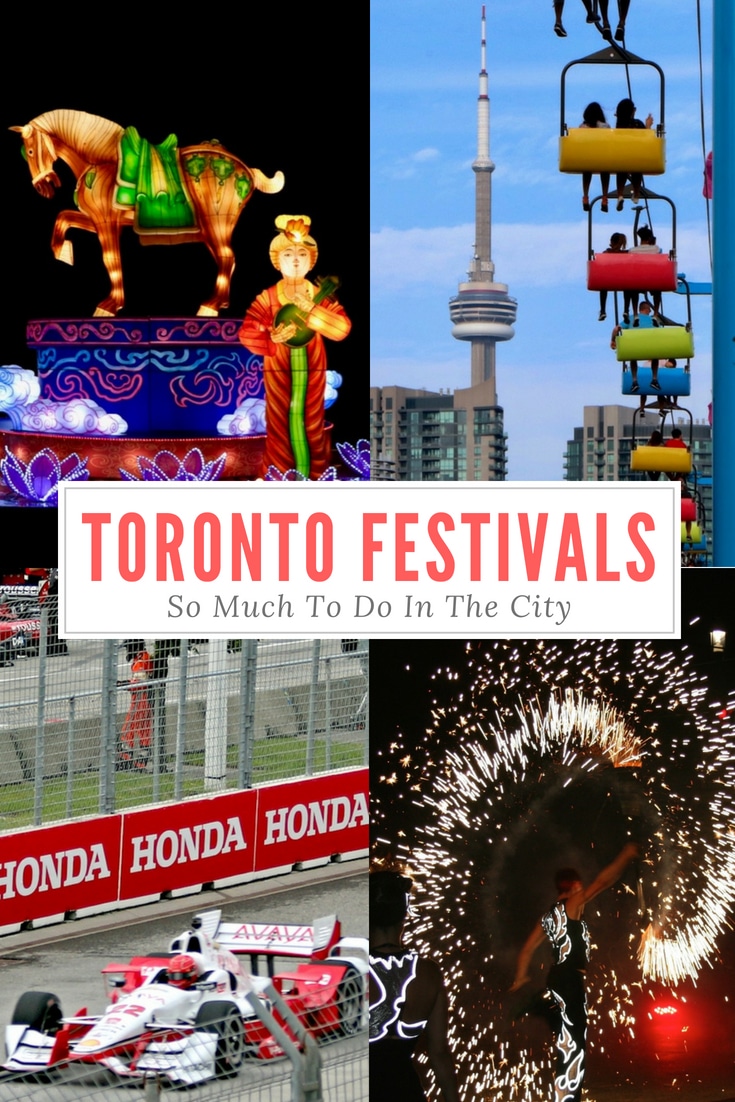