On the last day of our Caribbean cruise, we enjoyed a fun beach day at Great Stirrup Cay. There were lots of fun activities available for this port stop. But we were happy we chose to relax on the vast sand beach with a great view of the Caribbean Sea. When we needed some water fun, we donned our snorkel gear. It was interesting as we explored the underwater sculpture garden.

On our travels to the Caribbean, we spent lots of time in the Bahamas. So we were excited when we planned our Caribbean cruise and saw a new Bahamas destination on the Itinerary. When we did some research about Great Stirrup Cay, we quickly learned that this was a private island exclusive to Norwegian Cruise Line guests. And since Oceania Cruises was part of the Norwegian group, we got access to this port stop.

Norwegian purchased the island from the Belcher Oil Company in 1977 and developed it into a private island for their cruise ship passengers. We learned it was the first uninhabited island ever to be turned into a private cruise port. But given how long it was around, we were surprised we had not yet visited Great Stirrup Cay on our many Caribbean Cruises with Oceania.

Great Stirrup Cay is a small island in the Berry Islands. Like many of the Bahamian islands, it was formed by tectonic and glacial shifting. The island was originally a coral reef under the water. Much of this coral structure was visible today and this porous rock explained why there were no rivers or lakes on these islands.

We learned that Great Stirrup Cay was not always an unoccupied island. In 1492 the Spanish arrived on the island. The British came after the Spanish around 1600. And then the well protected coves brought pirates. The island provided safe harbours for pirate vessels that plundered Spanish gold ships as they returned from South America.

The pirates kept these islands while the British moved to Nassau and the larger islands. But they were ultimately abandoned. Only to be re-purposed for holiday fun! We were certainly excited to spend a fun beach day at Great Stirrup Cay.

For such a small spot, we were surprised at the number of ship excursions available for our beach day at Great Stirrup Cay. On the island, snorkelling and kayaks were offered. The snorkelling fee just provided the snorkel gear. We packed our own snorkel gear for this trip so we could enjoy the many opportunities for water fun in the Caribbean on this cruise. We did not want to commit to kayaking time, so we hoped we might rent a kayak once we got to the island.

The big attraction on the beach at Great Stirrup Cay was the zipline. There were a series of three flights starting 130 feet above ground from a replica lighthouse and the experience lasted about an hour. The first zip-line was 100 feet long. The second zip-line was longer at 600 feet and the final zip at 600 feet long took you back to ground level. 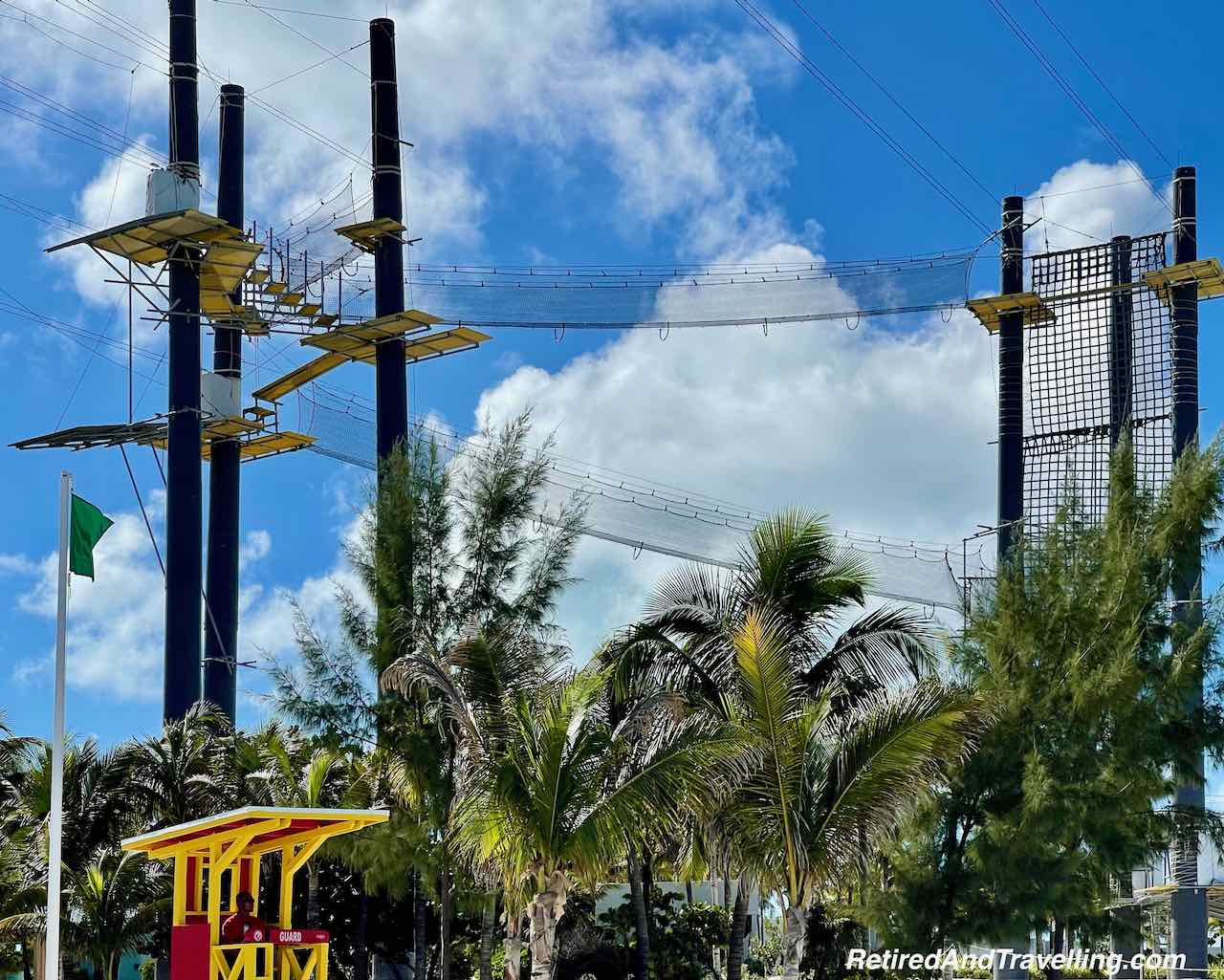 There were also excursions that took people off the Great Stirrup Cay island. A speedboat excursion went to Stingray City for a swim with huge southern stingrays. There was also another trip to swim with the pigs. When we stayed on Exuma one year, we enjoyed a fun trip to swim with pigs. So we passed on that trip.

We were ready for some beach time. So we booked no excursions for Great Stirrup Cay and planned to enjoy the beach and crystal blue waters.

Arriving For Our Beach Day At Great Stirrup Cay

We were quite excited to have a deserted island just for the passengers on the Oceania Cruises Marina ship. We sat on our balcony as the the island came into view. So we were quite surprised when we saw a large ship tied up to a dock on the island in front of us. We saw the Royal Caribbean logo on the ship and quickly determined that this island was CocoCay (once called “Little Strirup Island”). 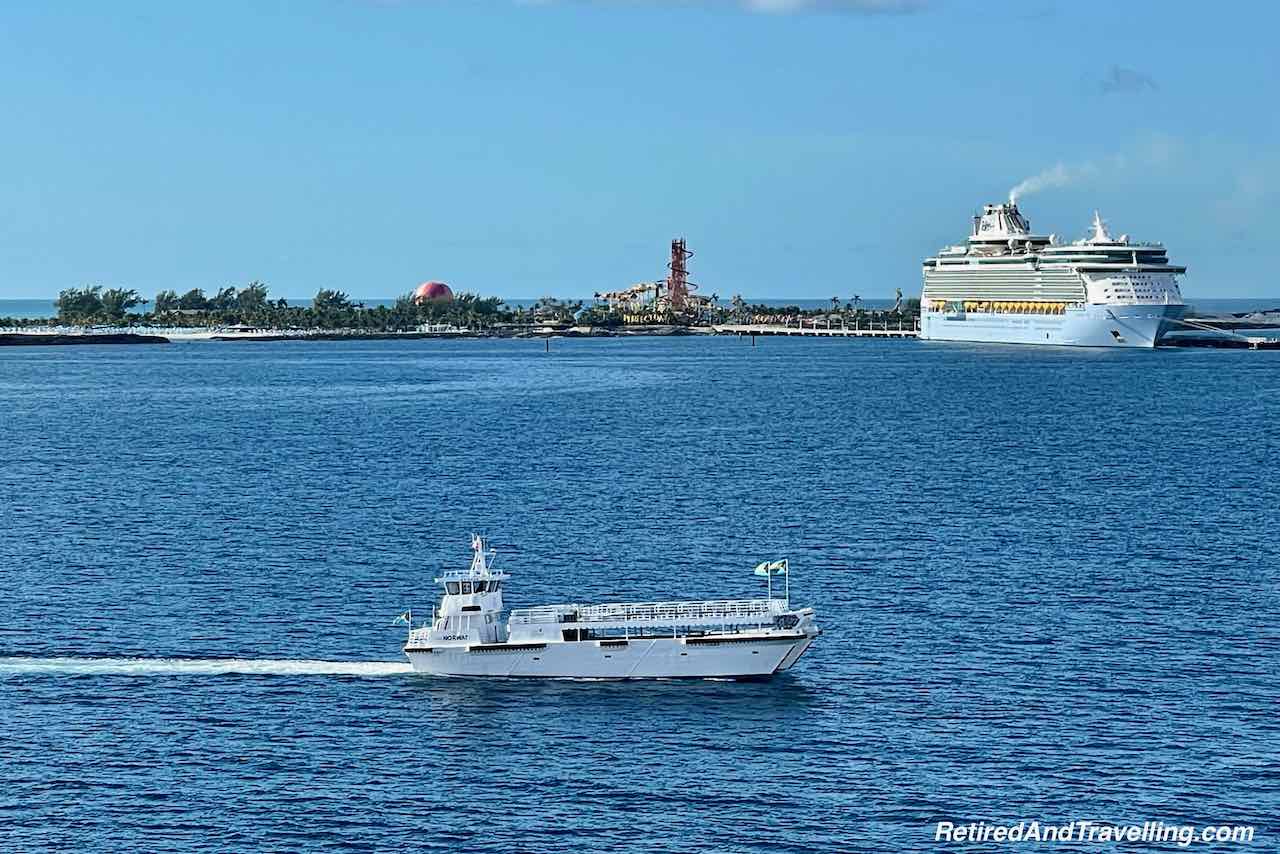 CocoCay was the island privately owned by Royal Caribbean for its cruisers. Not only did it have a dock, but it also looked like there was much to do on the island. We learned the island had the tallest waterslide in North America! But that stop was not for this trip. When our ship turned, we saw Great Stirrup Cay right beside CocoCay.

We were prepared to be tendered to shore. But when a flotilla of boats headed towards our ship, we were happy when these bigger boats eased some of the constraints of tender transfers. 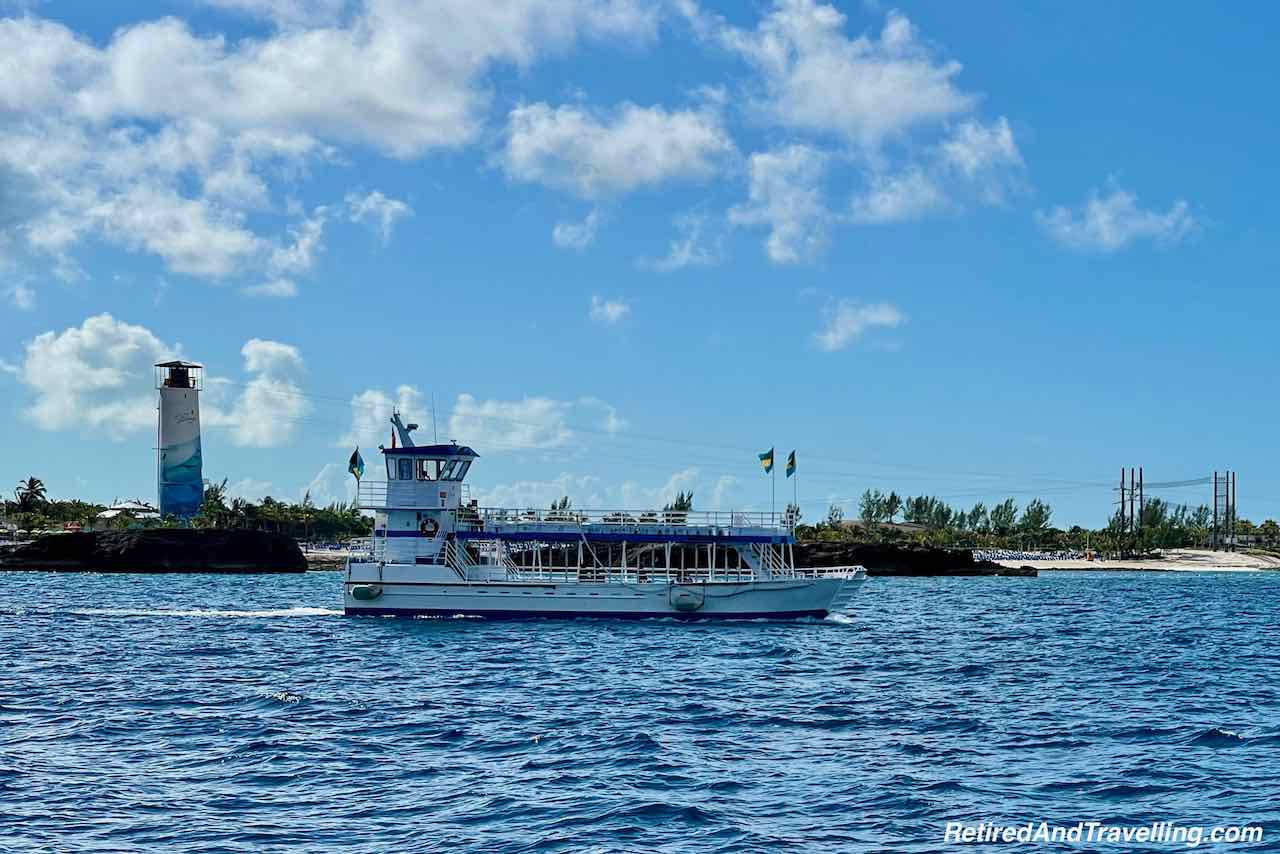 It was not long before we jumped on a boat and headed for our fun beach day at Great Stirrup Cay.

The boat trip was short and we soon arrived and headed along the path. It was strange to pose in front of the Christmas tree while palm trees towered above. 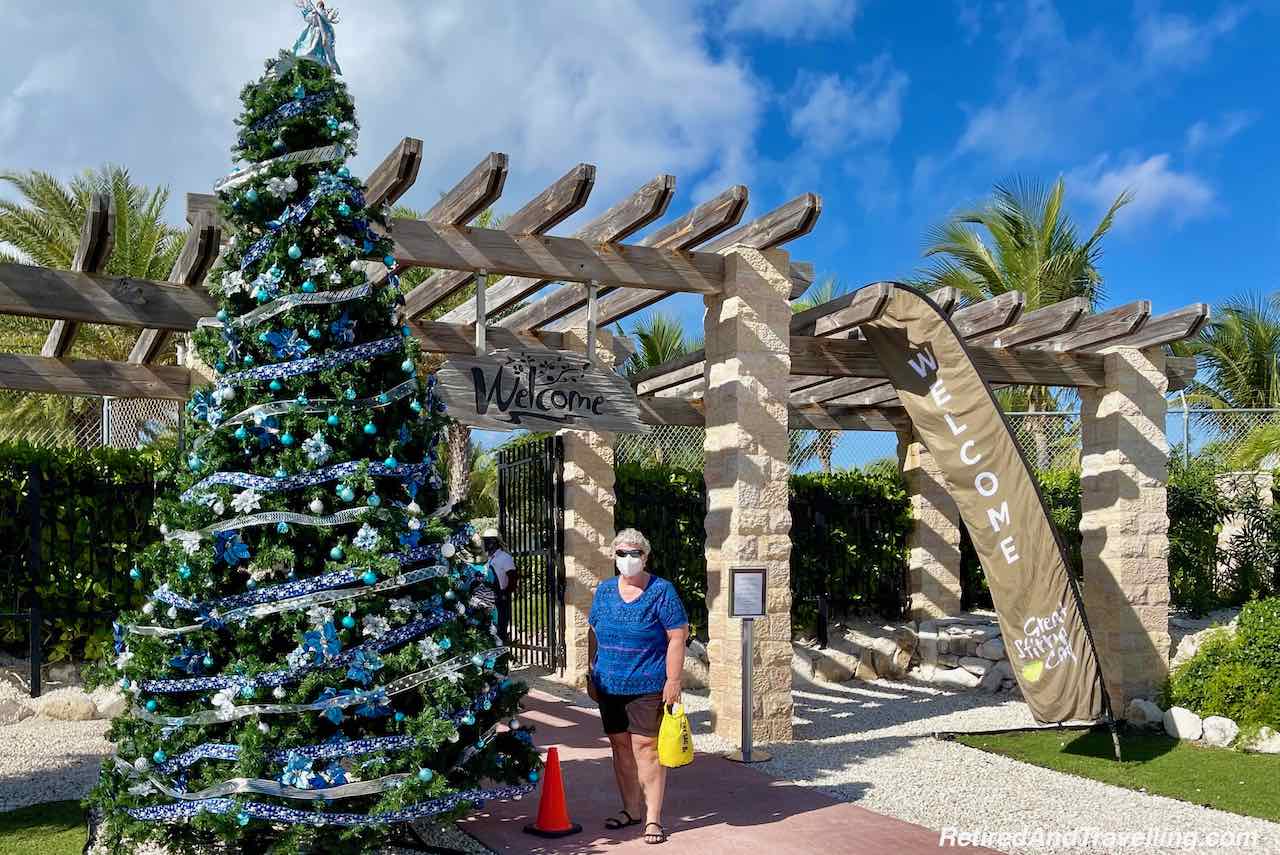 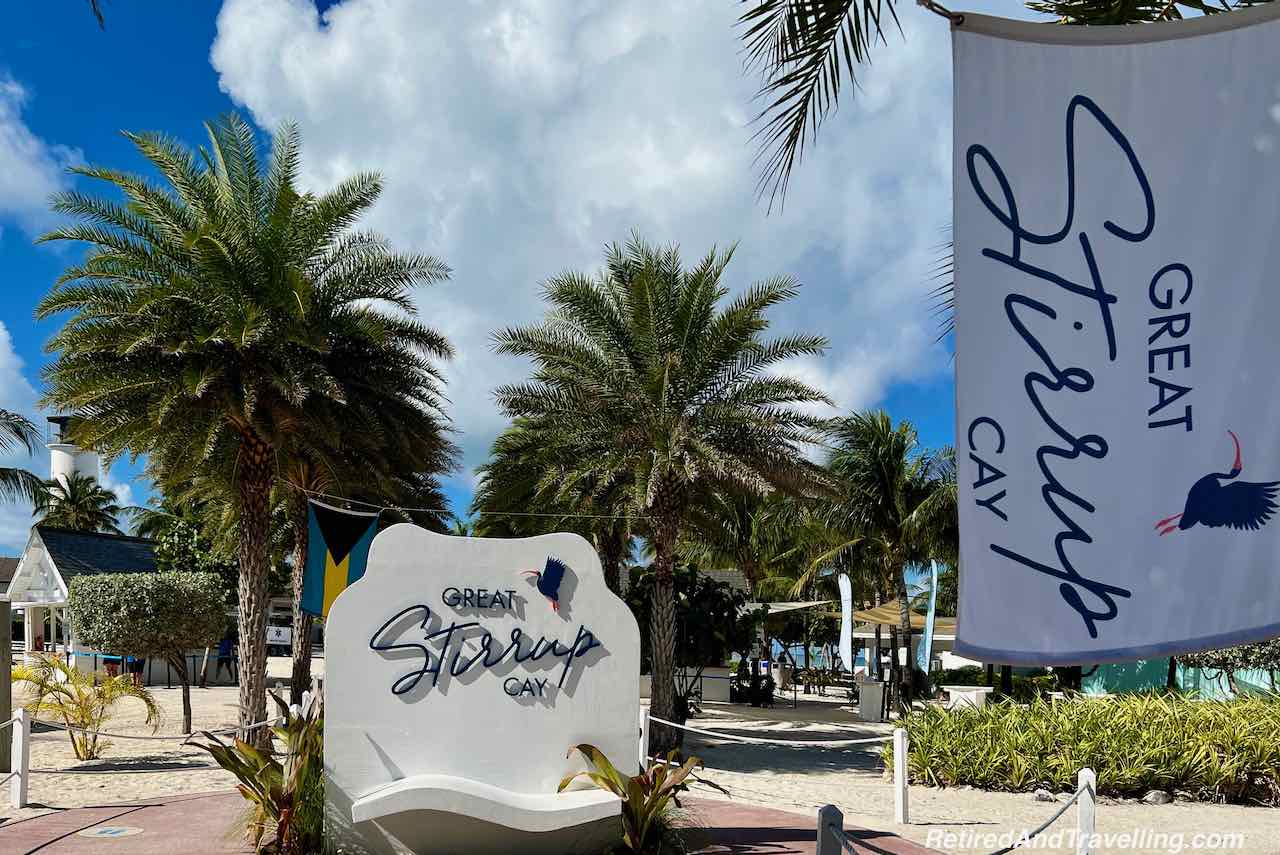 The Great Stirrup Cay replica lighthouse towered over the beach. It was the launch pad for the zipline. The lighthouse was modelled after the real lighthouse on the island that was built in 1863 by Imperial Lighthouse Service. That lighthouse was no longer manned after it was fully automated and solar powered. 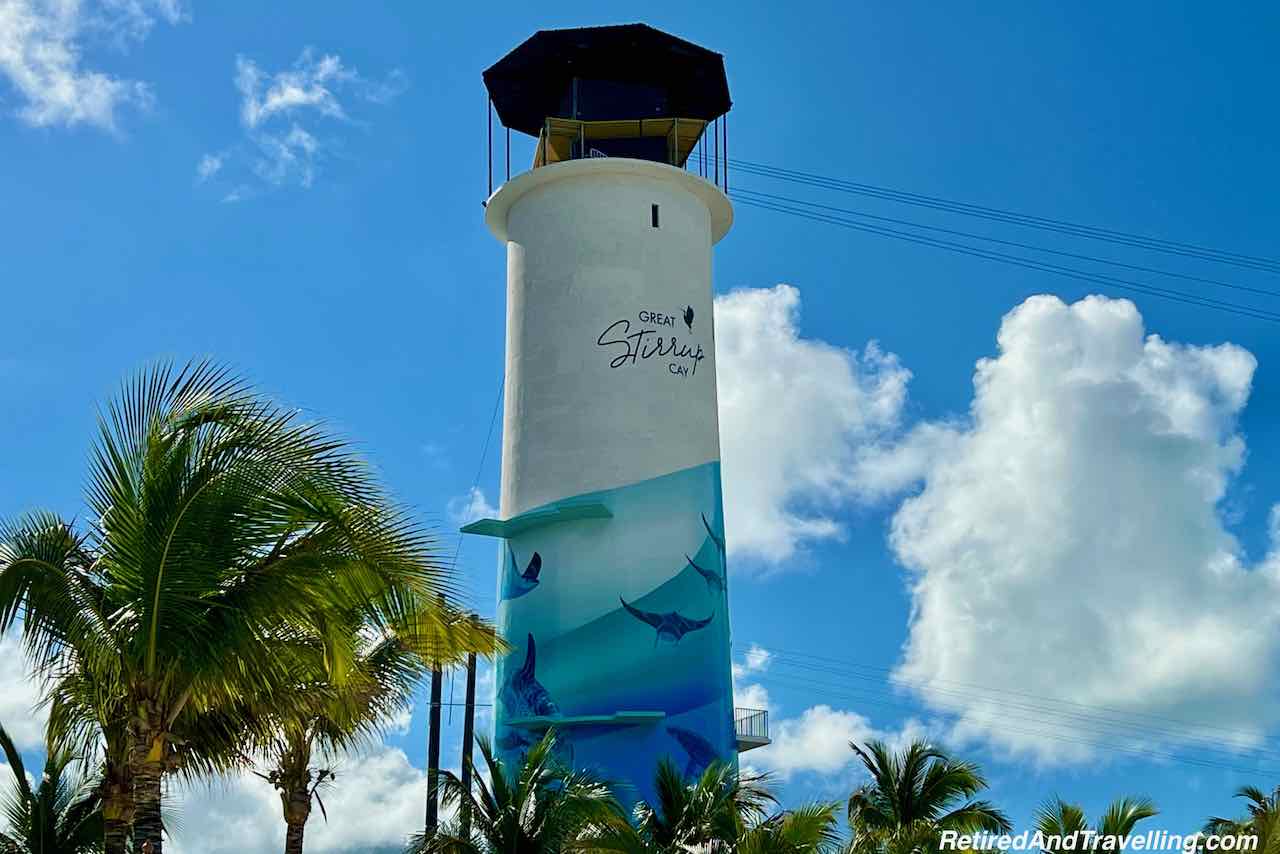 As we got closer to the lighthouse, we saw bright and colourful marine wildlife painted on the tower. This masterpiece created by Guy Harvey included sea turtles, manta rays, dolphins, and more. 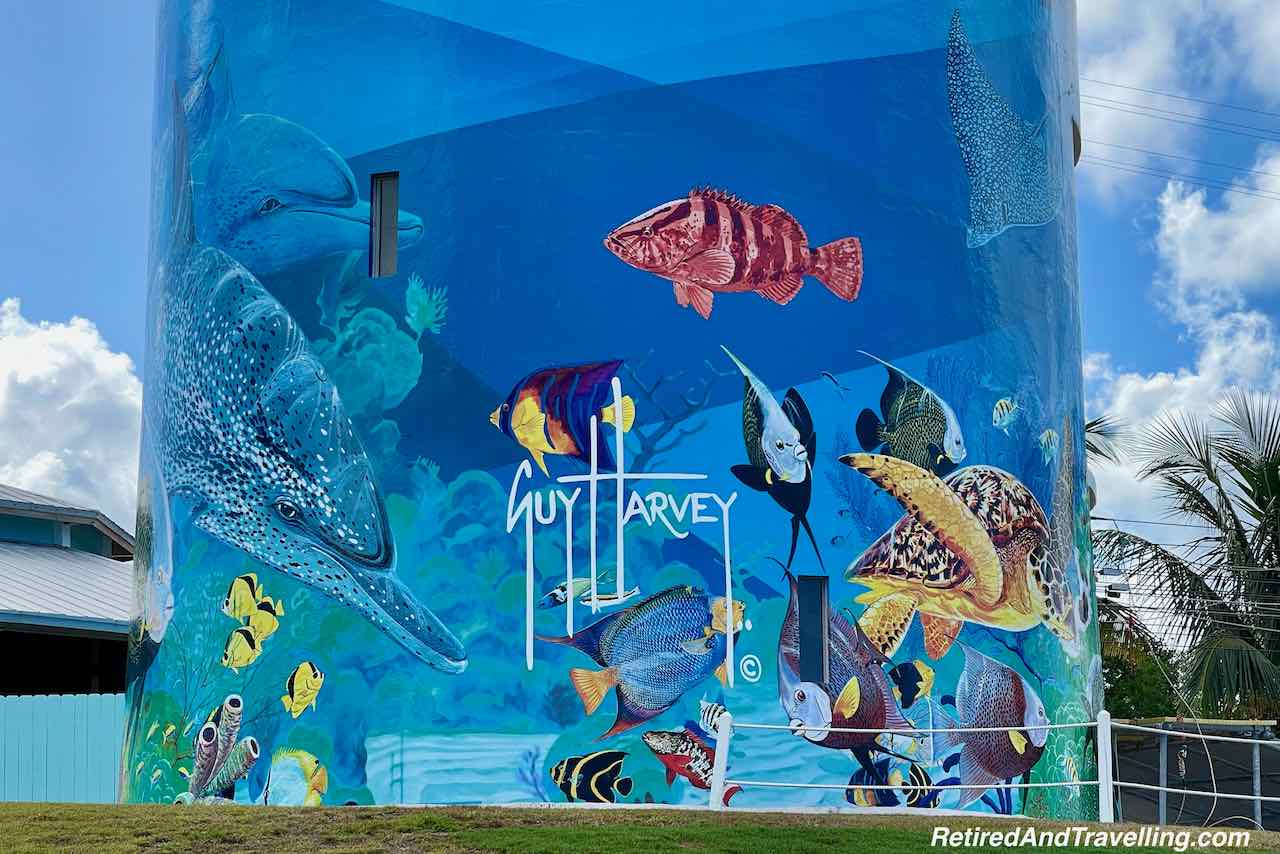 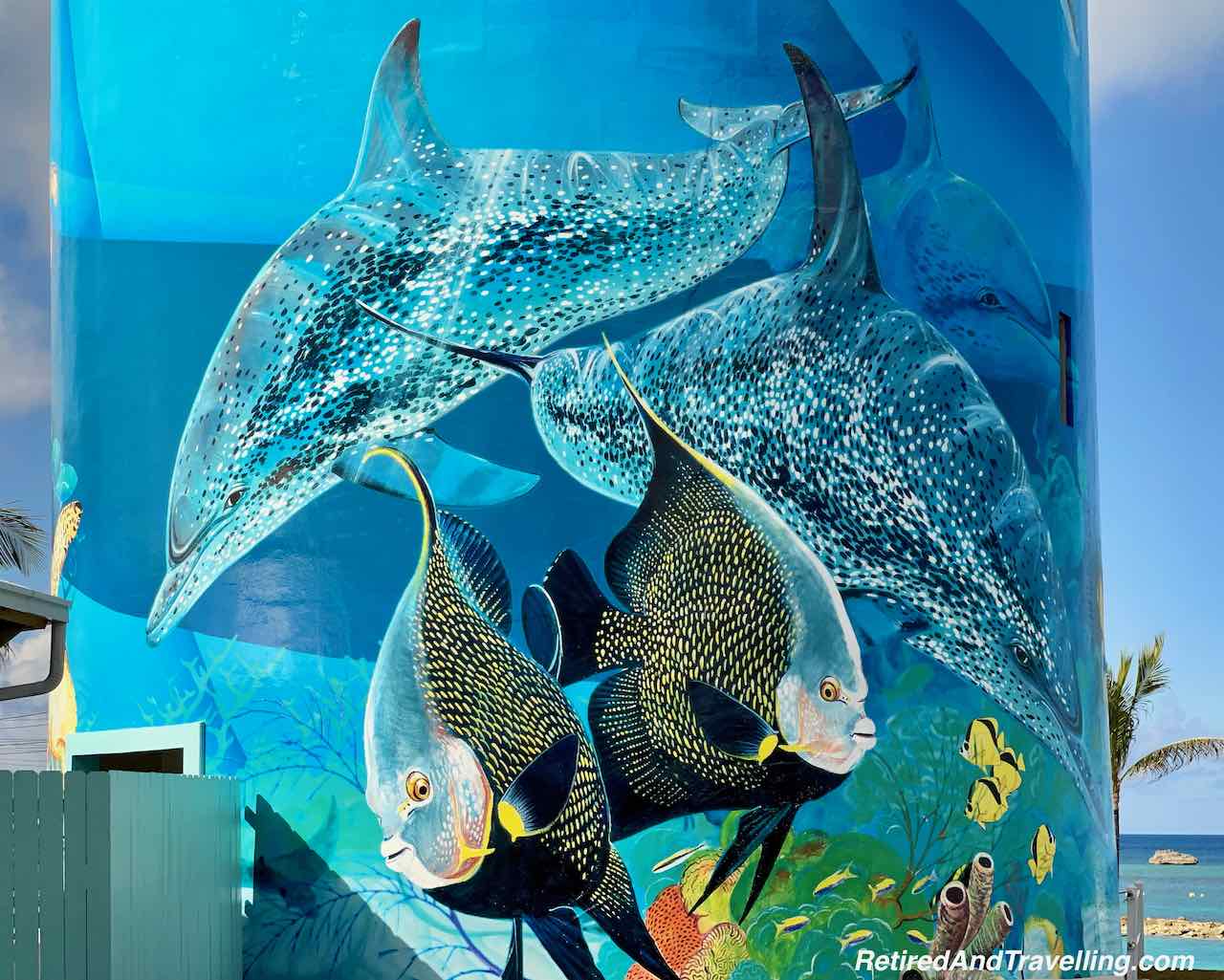 We found a pair of lounge chairs and settled down for our fun beach day at Great Stirrup Cay.

With only our smaller ship at Great Stirrup Cay, the vast beach area looked almost empty. The sand stretched out in both directions with rows and rows of lounge chairs. 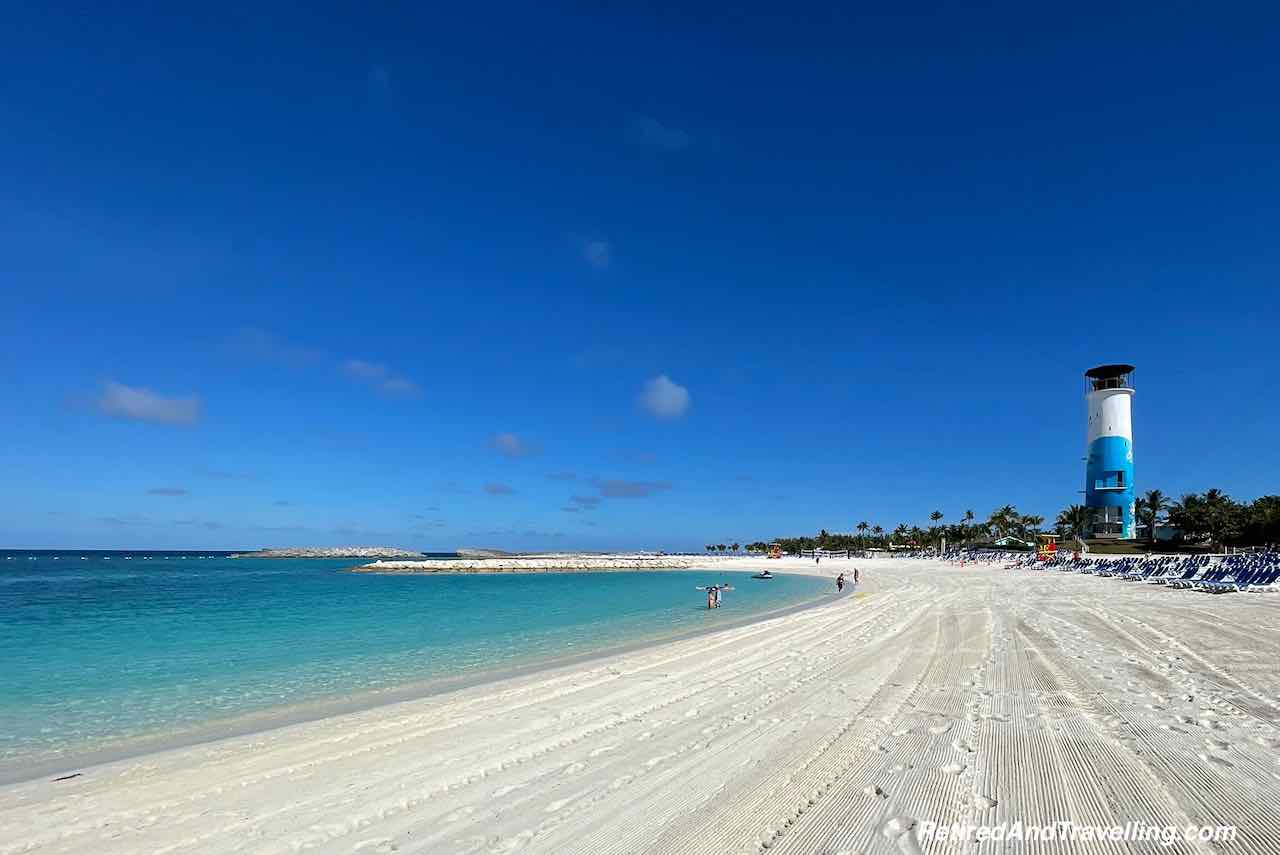 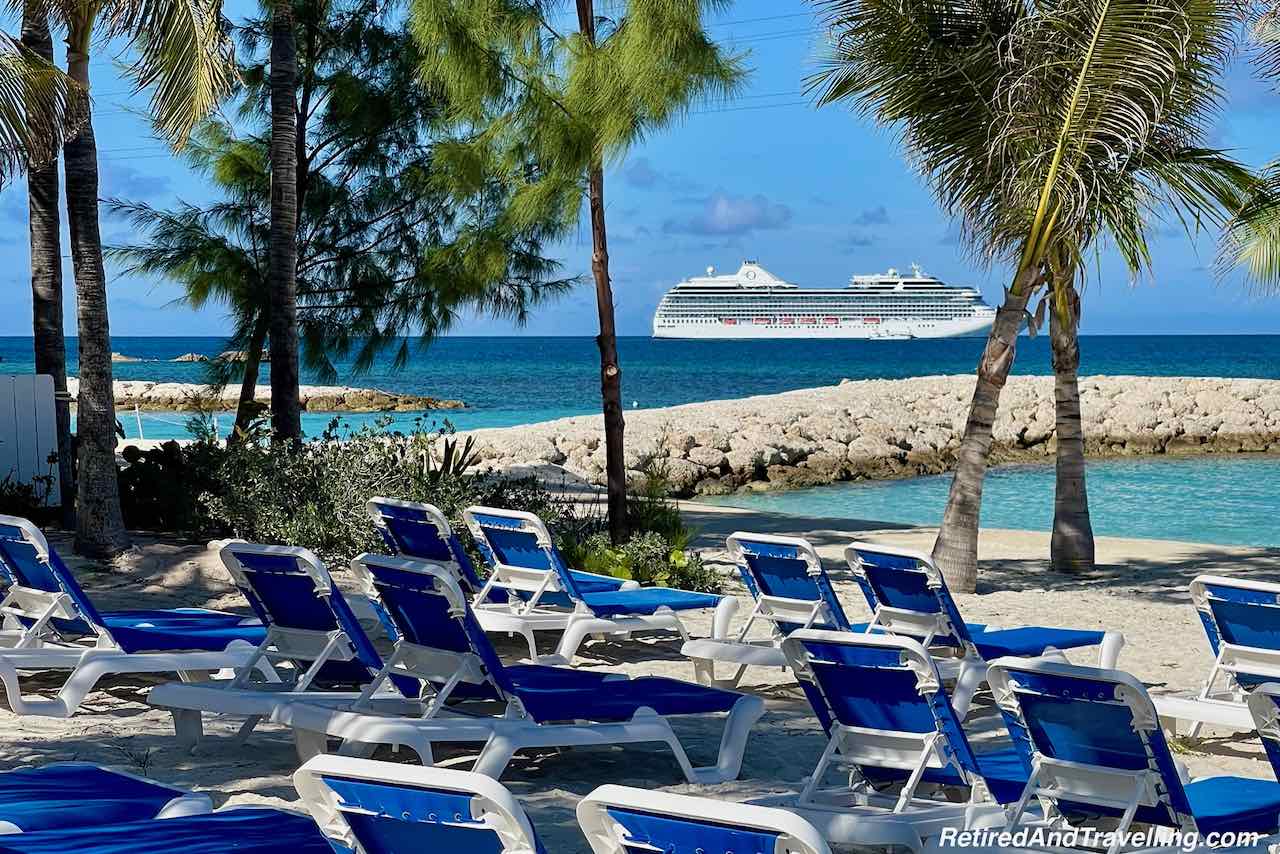 We had no trouble finding a spot that was not crowded and had some shade too. One of the excursion packages actually provided access to the luxury cabanas on the island. This was great for small groups and families of 8-10 guests. There were only three cabanas rented during our stay. The cabanas had a front porch and comfortable furnishings. But the empty beach was perfect for us!

Right beside where we settled we saw the Bacardi sign on the beach bar. It had a sign that welcomed the Oceania Cruises passengers. We were reminded before we left the cruise ship to take our ship access card. We needed no money to get some cold beers since we just charged them directly to our cruise cabin. 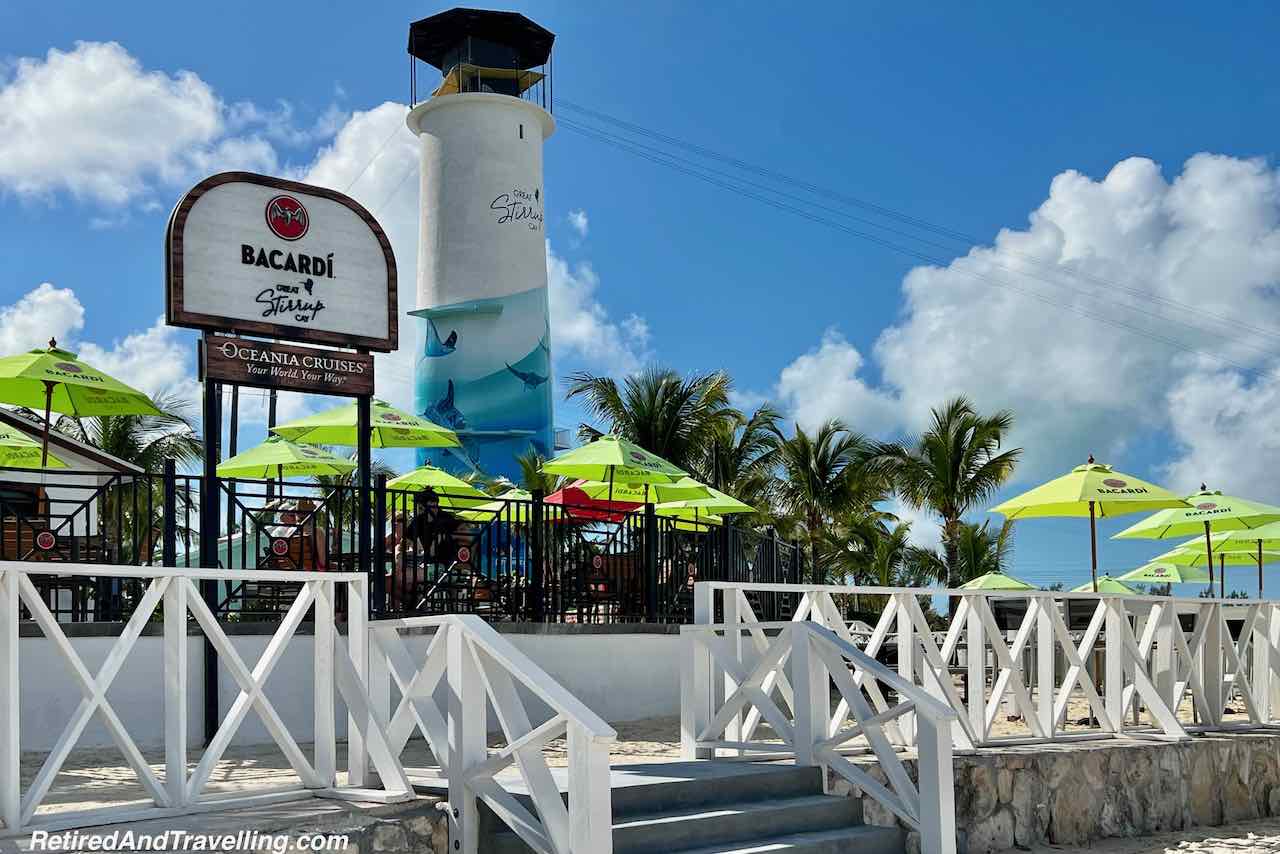 There was a large buffet restaurant on the island and the lunch was covered in our cruise. The line ups were really long most of the lunch hour. So we finally decided to eat back on the ship. After all, we had the best cuisine at sea on the ship!

We always loved when we found interesting things underwater. On a visit to the Caribbean island of Grenada, we explored the Grenada underwater sculpture garden. Earlier on this trip, we snorkelled in St Maarten and found ship wrecks and an underwater helicopter. When we heard there were sculptures under the water at Great Stirrup Cay, we wanted to head underwater.

The beach was very long and there were several different rocky areas in the water. So we talked to the beach staff and found out where the underwater sculpture garden was. Of course they were at the other end of the beach from the quiet spot we picked to lounge. We debated walking the beach to enter the water closer to the sculptures. But ultimately decided a long swim was much better for us. 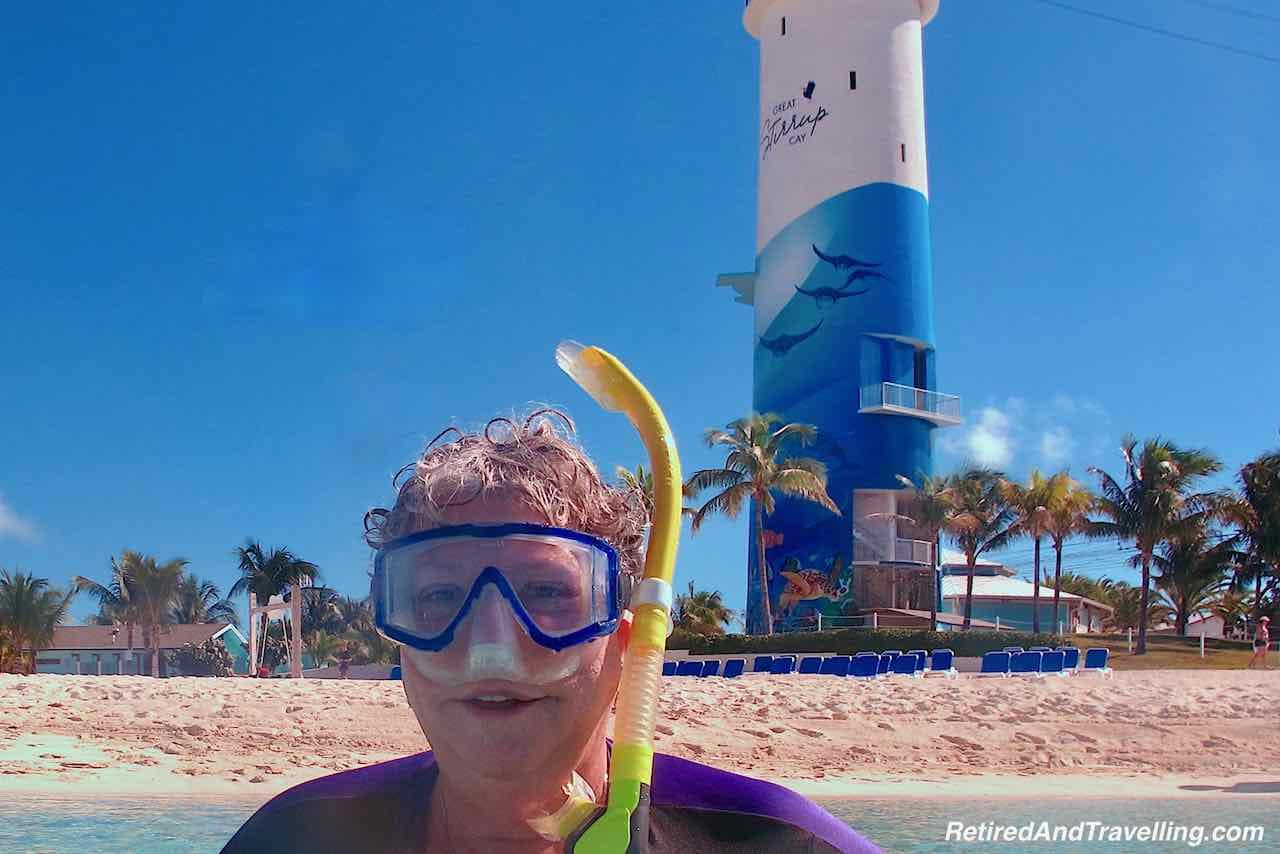 We entered the water and slowly swam out along the rocks. Small schools of fish entertained us. 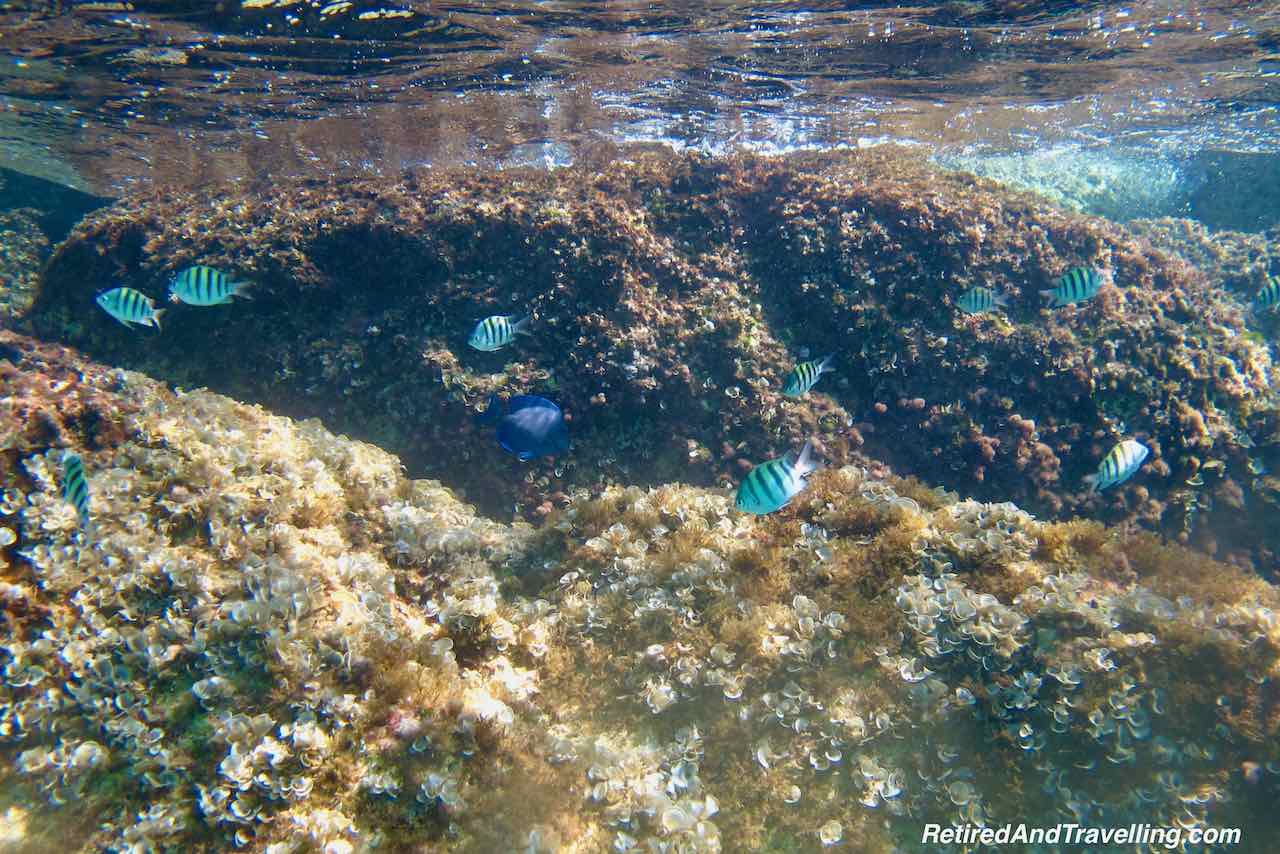 Snorkelling Around The Underwater Sculptures

Once bored with the rocks and the fish, we headed across the bay towards the rocks where we were told the underwater sculpture garden was located. This is officially called the Sir Nicholas Nuttall Coral Reef Sculpture Garden. But we did not have a map nor a list of things to look for.

As we swam around, we found a number of Bahamian-themed artworks and statues under the water. We saw sculptures of fish and other things we could not really define. 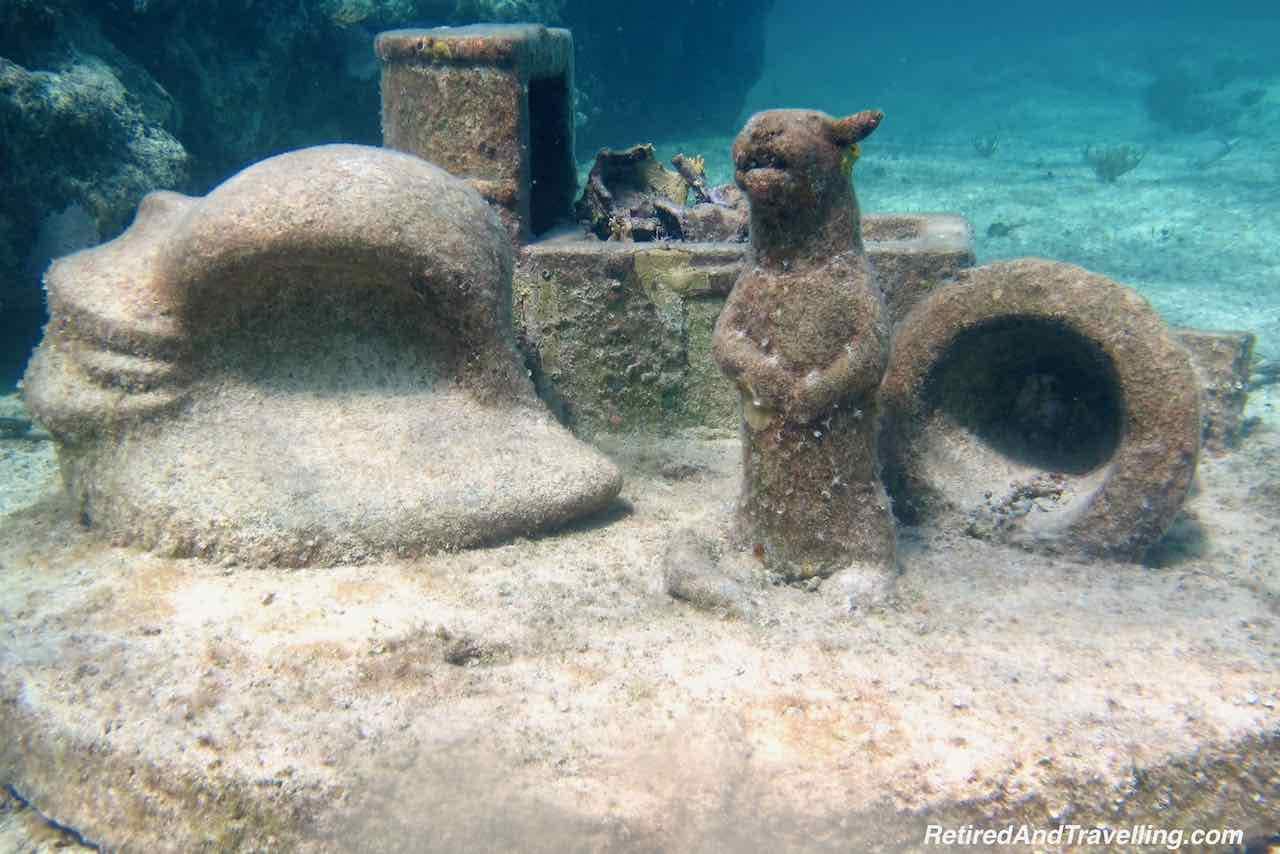 Mermaids under the sea called to us. And the octopus arms were frozen in time. What looked like a sculpture of a broken piano drew in the fish. 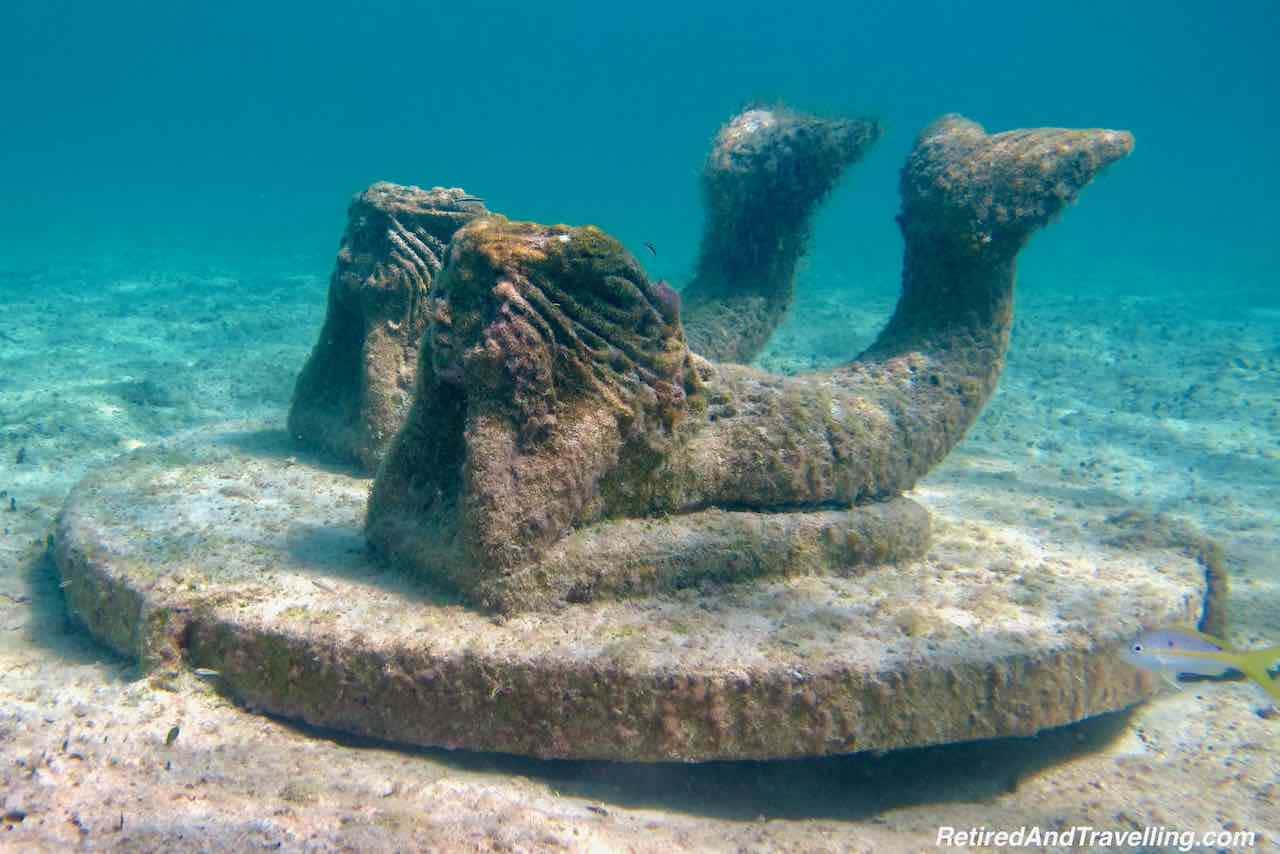 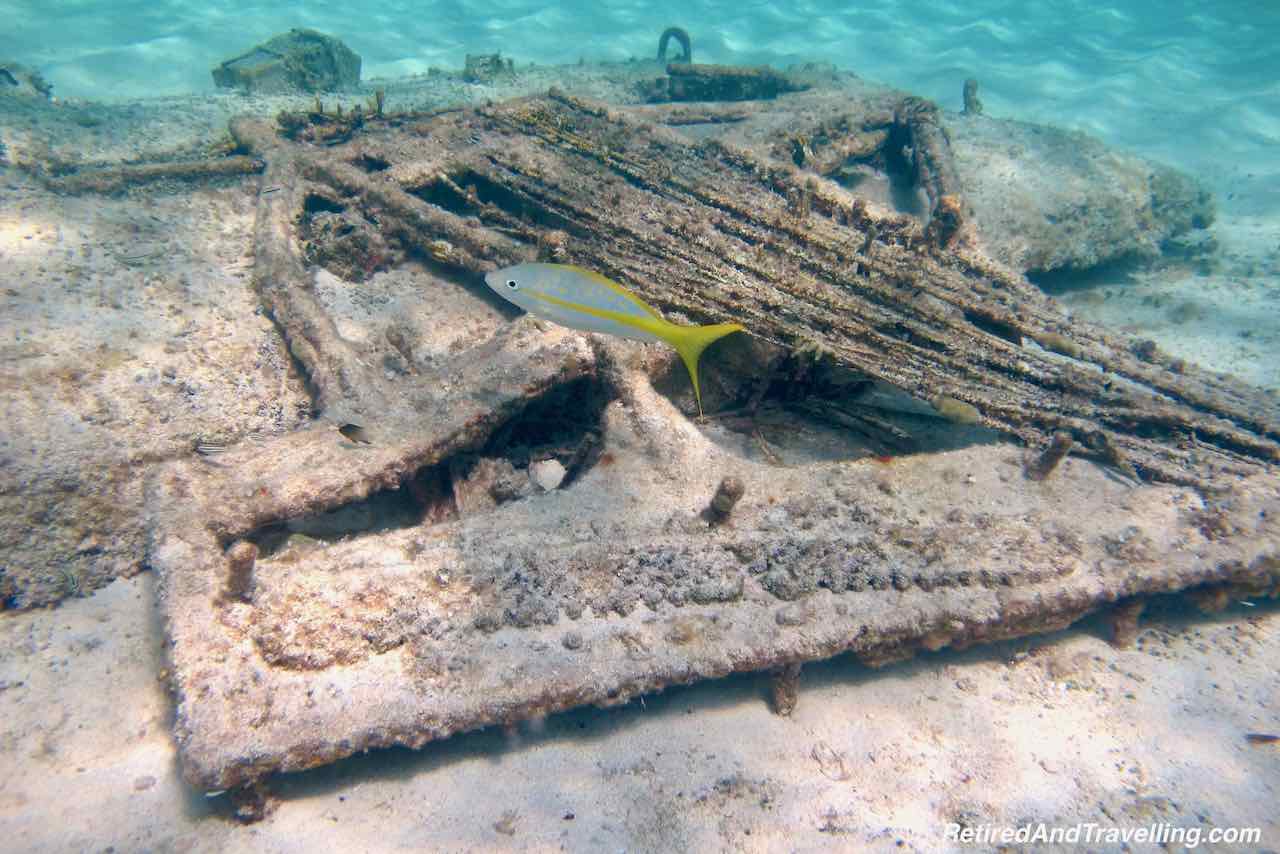 We spent a bit of time as we swam around the underwater skull and what might have been a chest of treasure. We suspected this harkened back to the pirate days of this island. 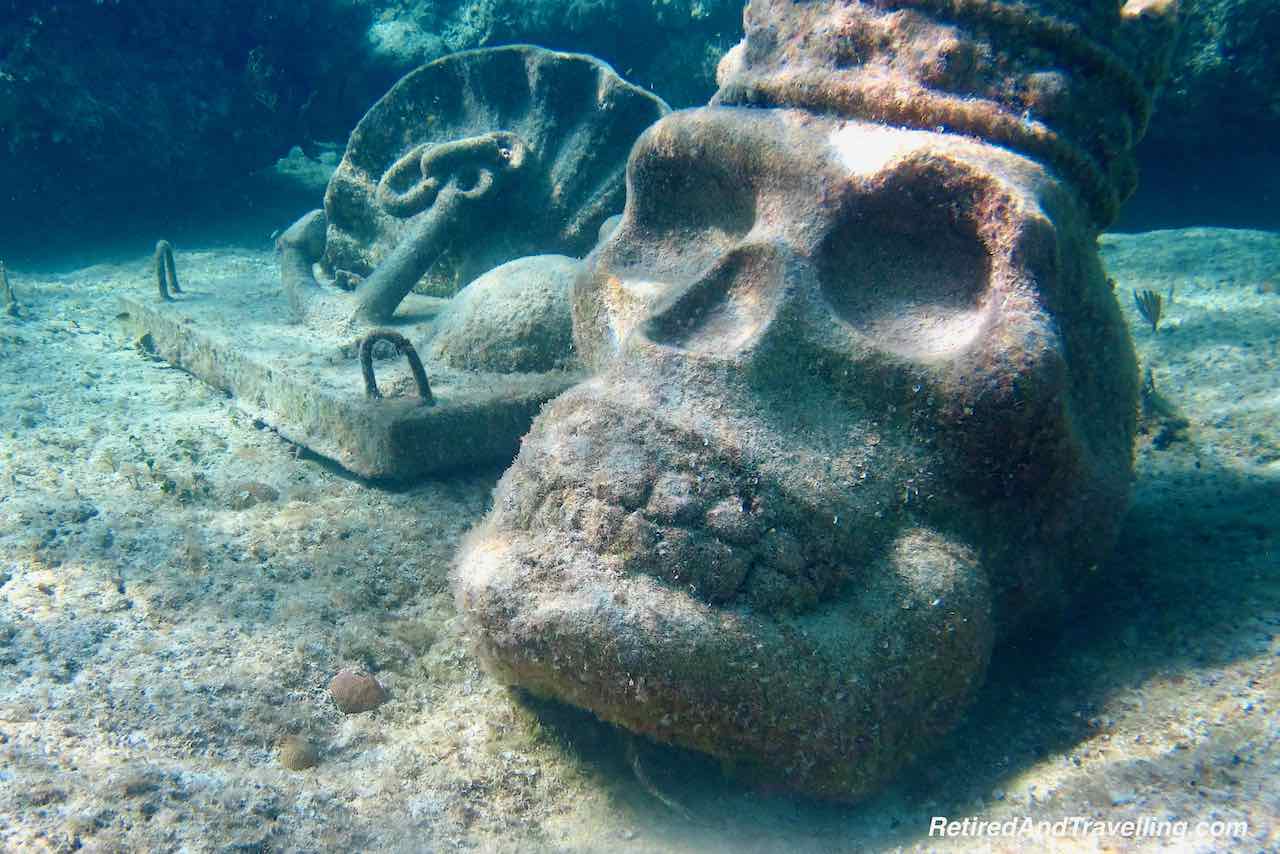 It was a lot of fun as we slowly swam along and saw yet another sculpture materialize in the water below us. But we had no idea how many of the total underwater treasures we saw.

When we were waterlogged, we turned back for the long swim back. But we sure enjoyed our snorkelling time on the beach day at Great Stirrup Cay.

A Fun Beach Day At Great Stirrup Cay In Bahamas

After many hours at the beach, we finally headed back to the ship. We re-traced out path and boarded one of the boats for the short ferry back. 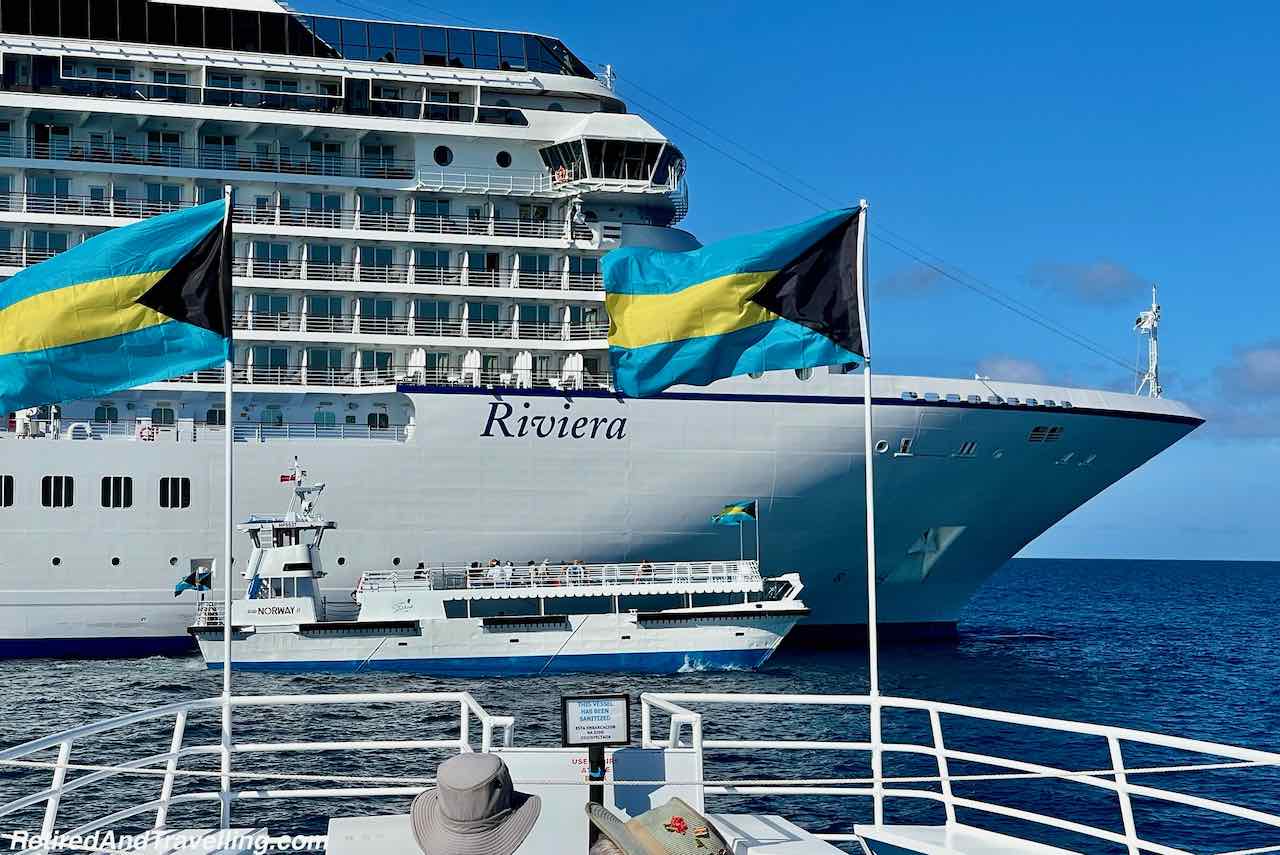 We originally planned to stay on board and not visit Great Stirrup Cay. On this Caribbean cruise, sometimes we loved having the ship quite empty. But we were so glad we went ashore and enjoyed such a fun beach day at Great Stirrup Cay. It was the last day on our cruise and the last chance to enjoy the hot weather before we head home to winter in Toronto. A relaxing way to finish our trip.

Have you enjoyed a beach day at Great Stirrup Cay in Bahamas? How did you spend your day? 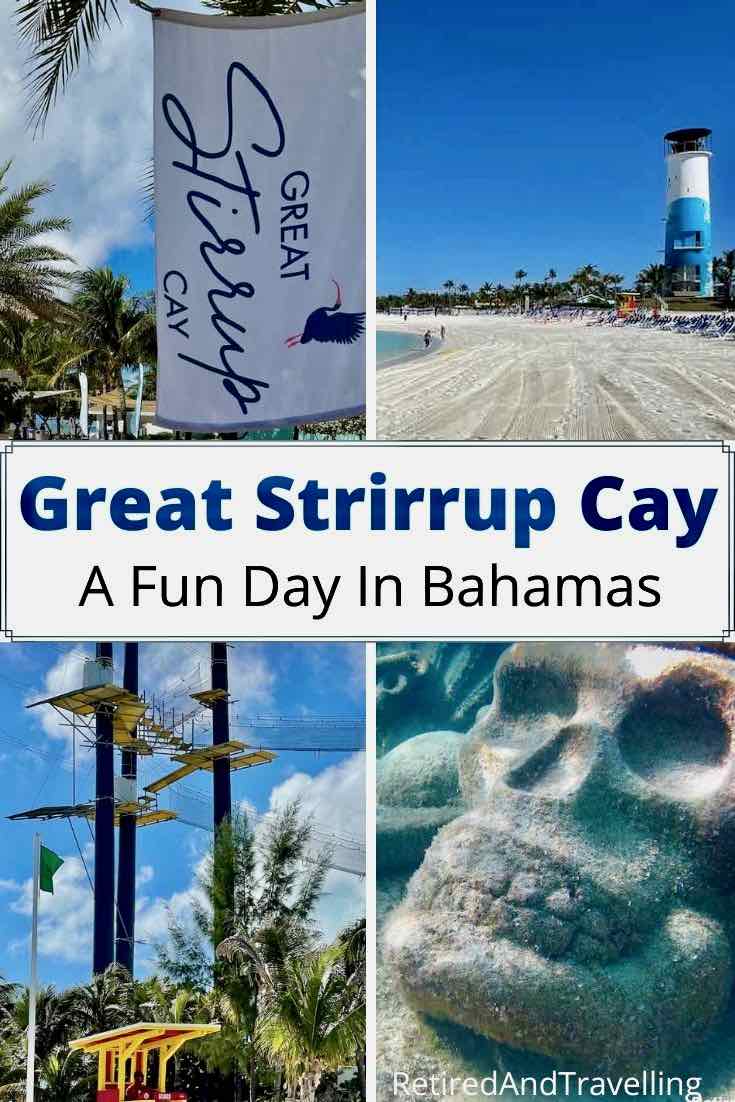 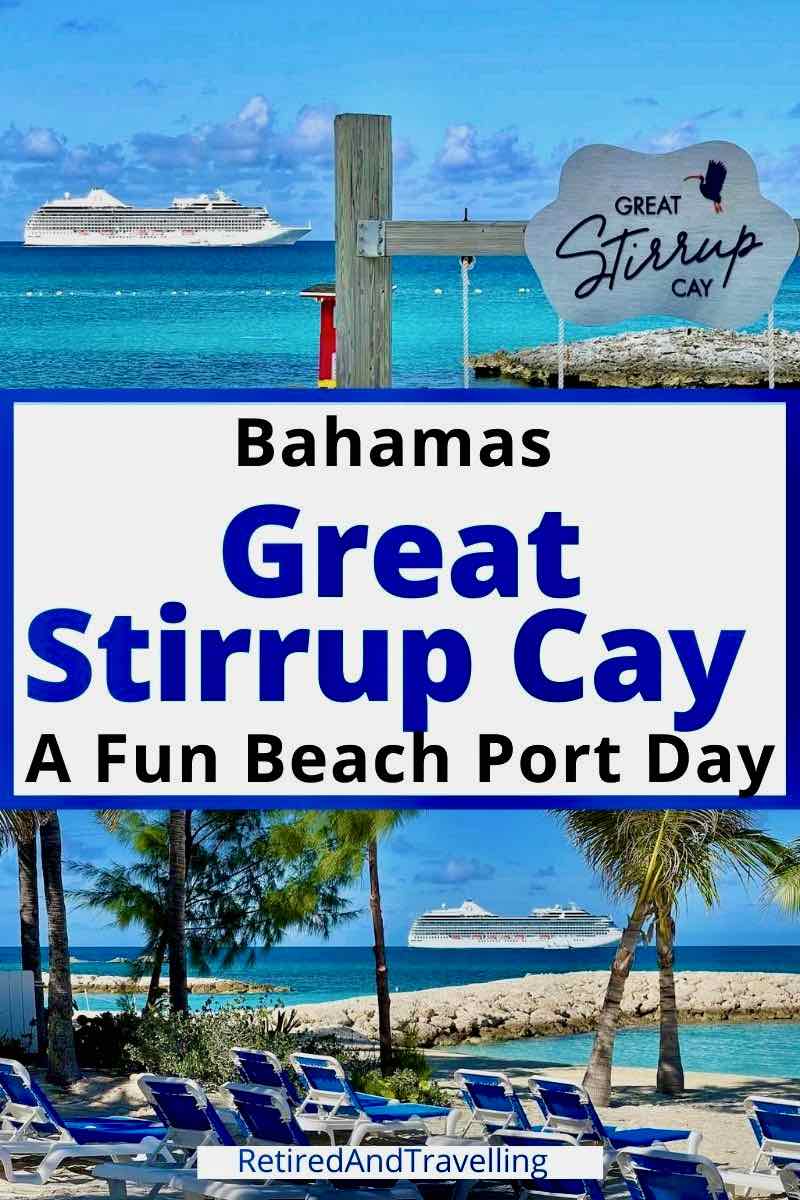 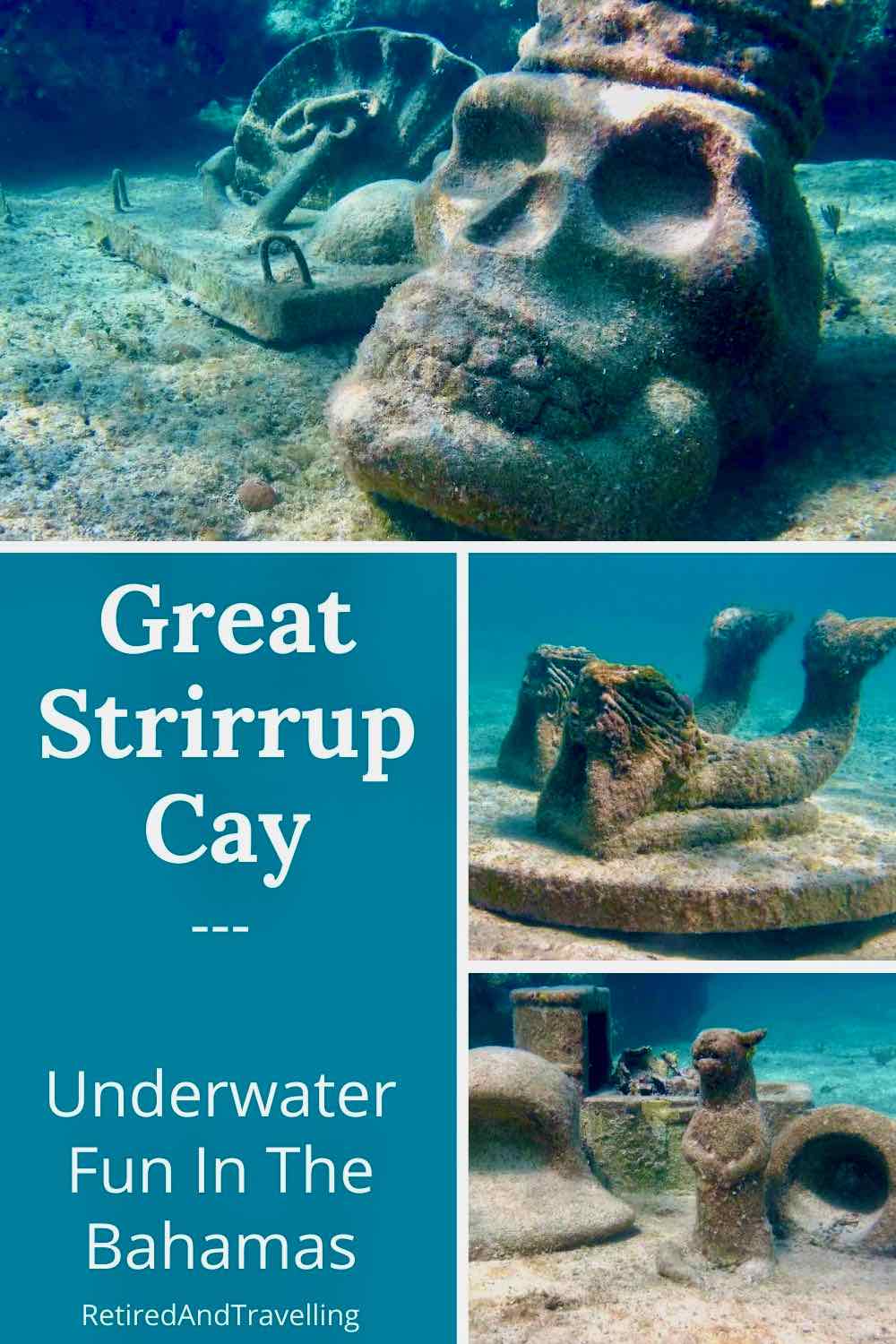 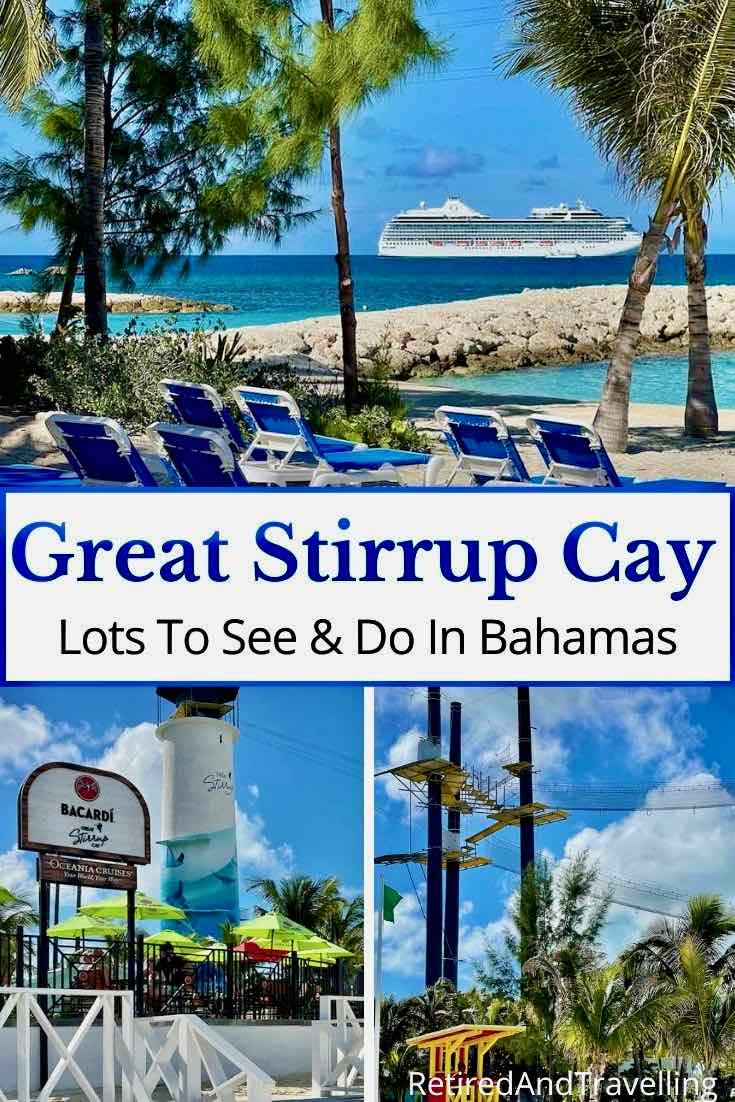 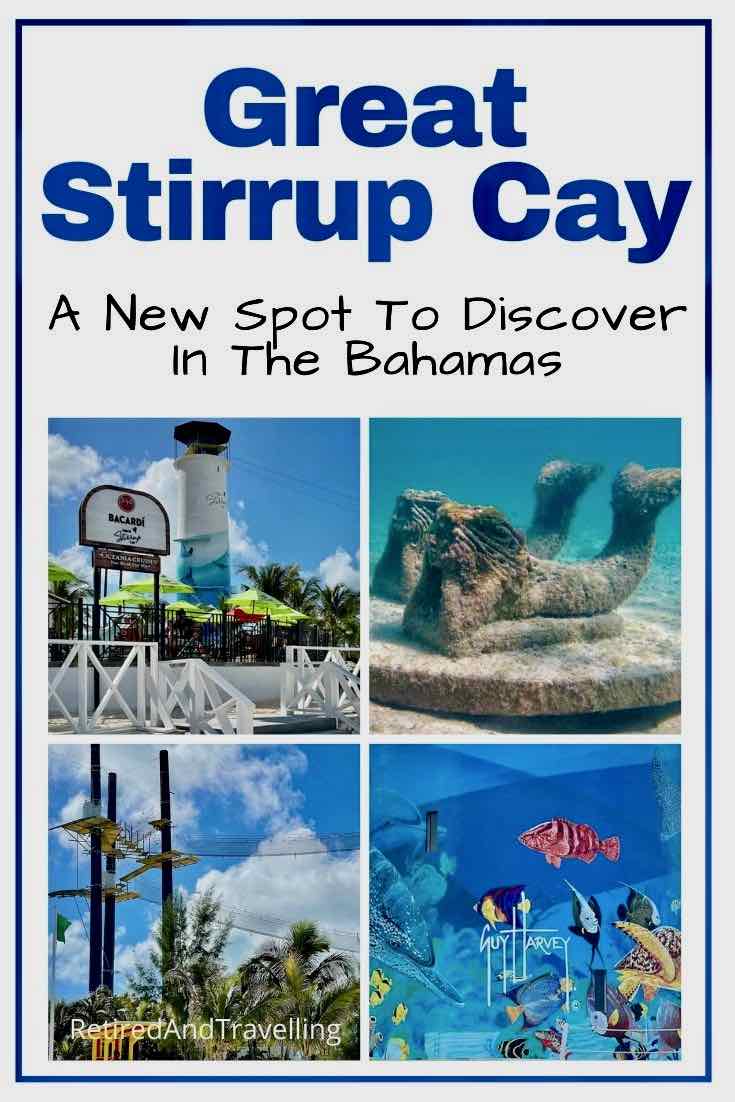