See The Tribute To The Pharaohs at Luxor Temple

There are two massive temples on the east bank of the Nile River in Luxor.  They were a great introduction to our view of the temples and tombs of Egypt!  We had the chance to explore the Karnak Temple day and night. This temple was built by Pharaoh Ramses II and was used to worship Amun-Ra . The second temple we toured on the east bank gave us a chance to see the pharaohs at Luxor Temple.

The Luxor Temple was originally built during the reign of Amenophis III and was then expanded by Ramses II. Ramses II added a statue of himself and two obelisks. Only one obelisk remains today. The matching one is now on display in Paris. This temple rebuilt and expanded by Alexander the Great, the Romans and then a mosque was added by the Muslims.

The Luxor Temple plays a key part in the annual Opet Festival. One ancient story suggests that Amun paraded from there down the Avenue of the Sphinxes towards the Karnak Temple. Once there, a celebration of fertility was performed with the goddess Mut.

Avenue of the Sphinxes

In ancient times, the Avenue of the Sphinxes joined the Luxor Temple to the Karnak Temple. Today, only the sections at each of the temples is intact. 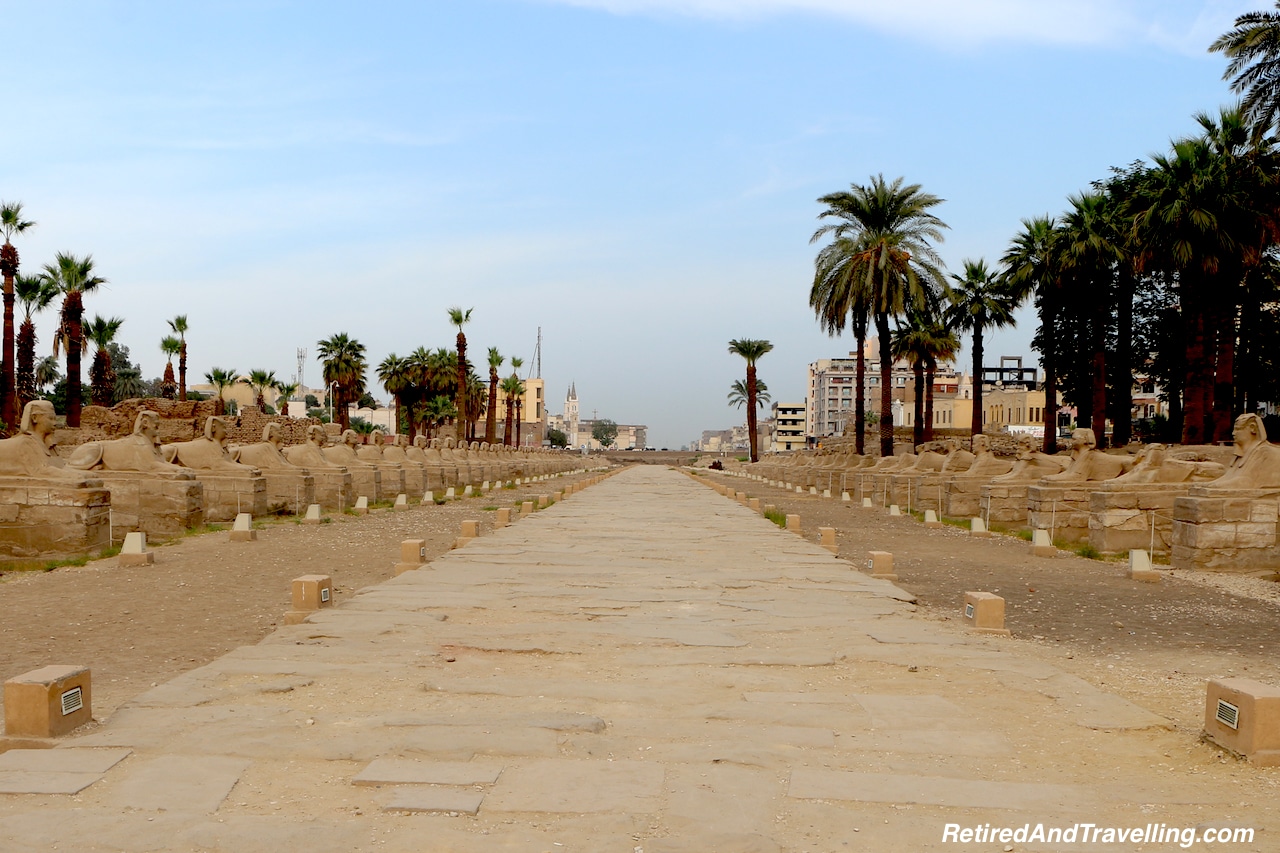 While the Sphinxes at the Karnak Temple had ram heads, the ones at the Luxor were traditional with human heads atop lion bodies. These Sphinxes also did not have the body of Amun-Ra under the head. 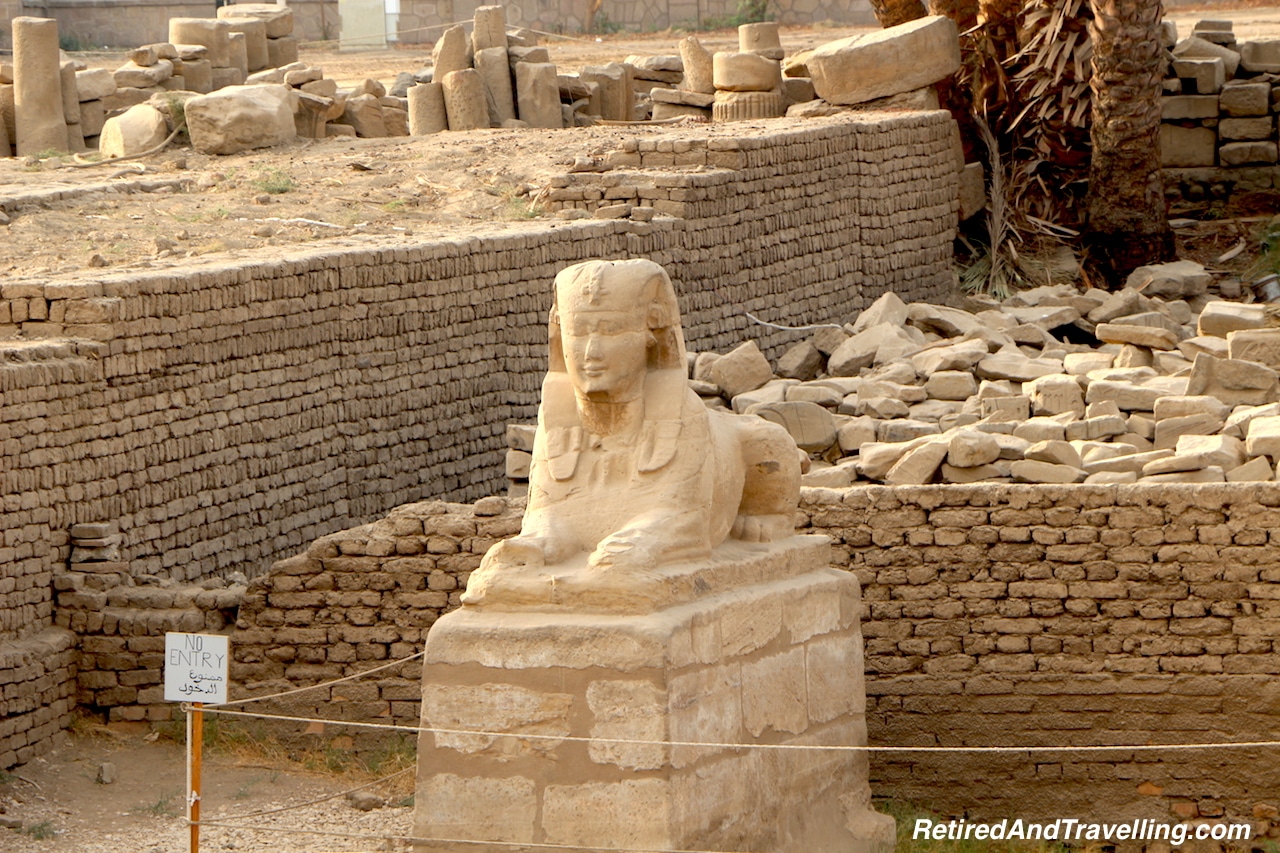 As you approach the Luxor Temple, you get a great view of the east and west pylons. This is the first view you will get of the tribute to the pharaohs at Luxor Temple. The single remaining obelisk stands tall. The building front is not perfectly symmetrical, so the missing obelisk is is not immediately noticed. As you approach the temple, you realize how massive this first portal is. 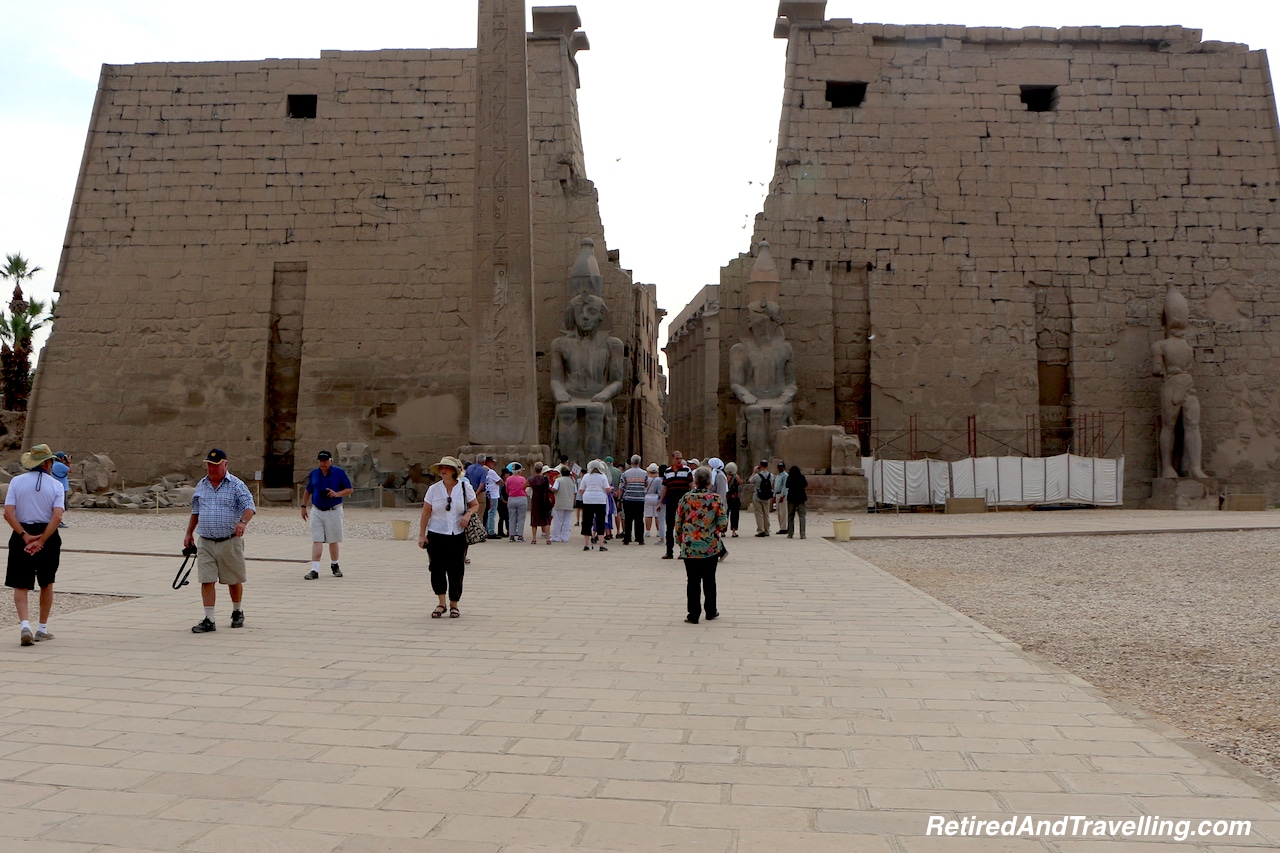 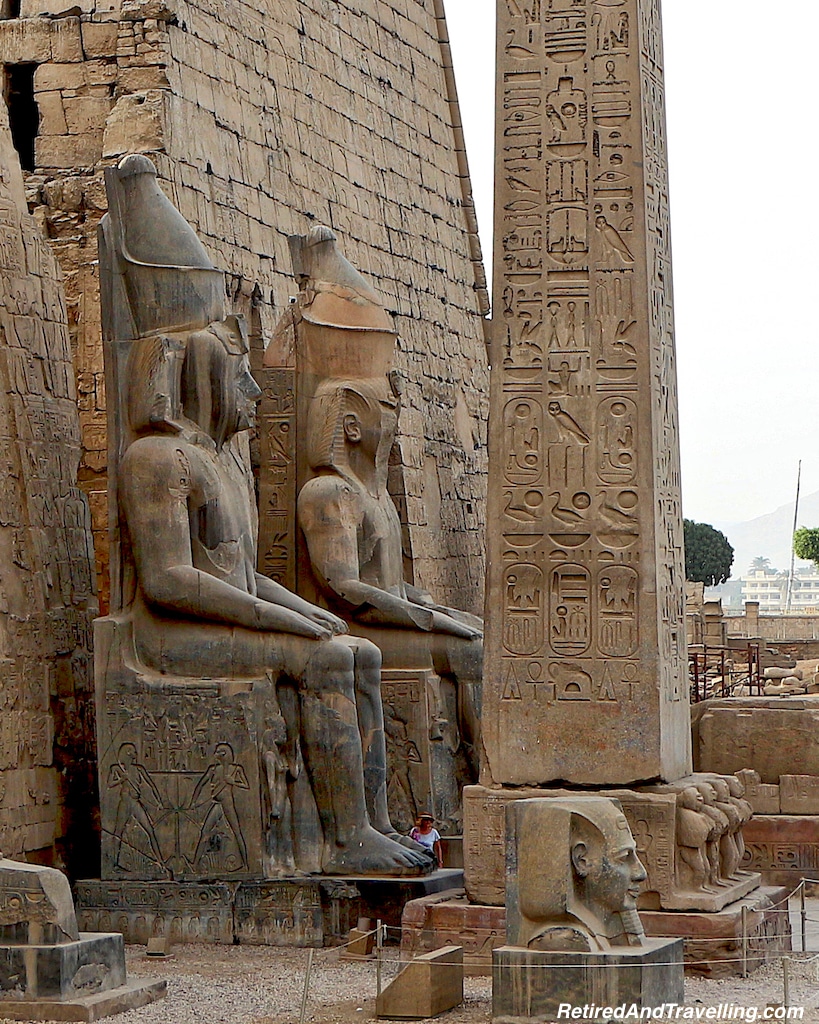 Once up close you can see the bust of Ramses II, just one of the pharaohs of Luxor Temple. 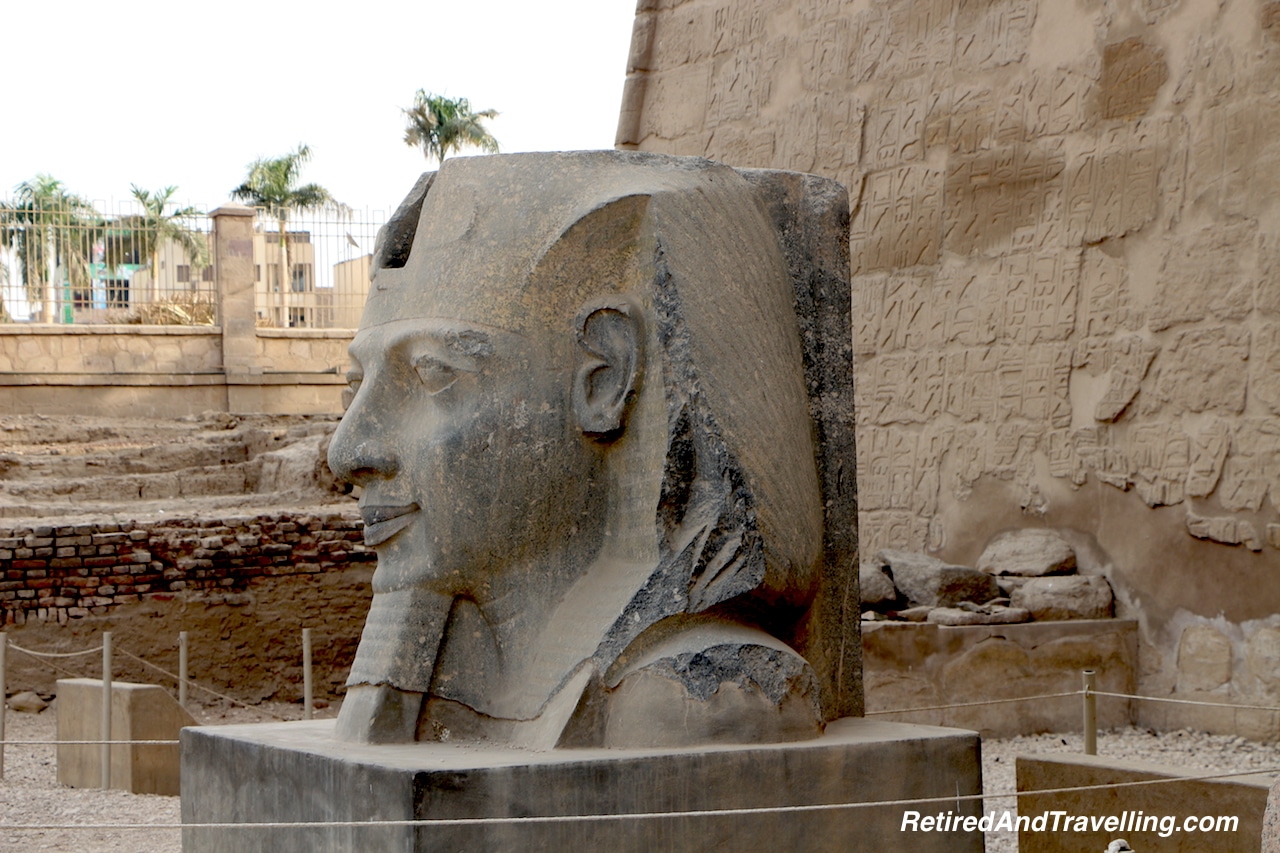 Off to the left hand side you can see the remains of the Thecia Church. 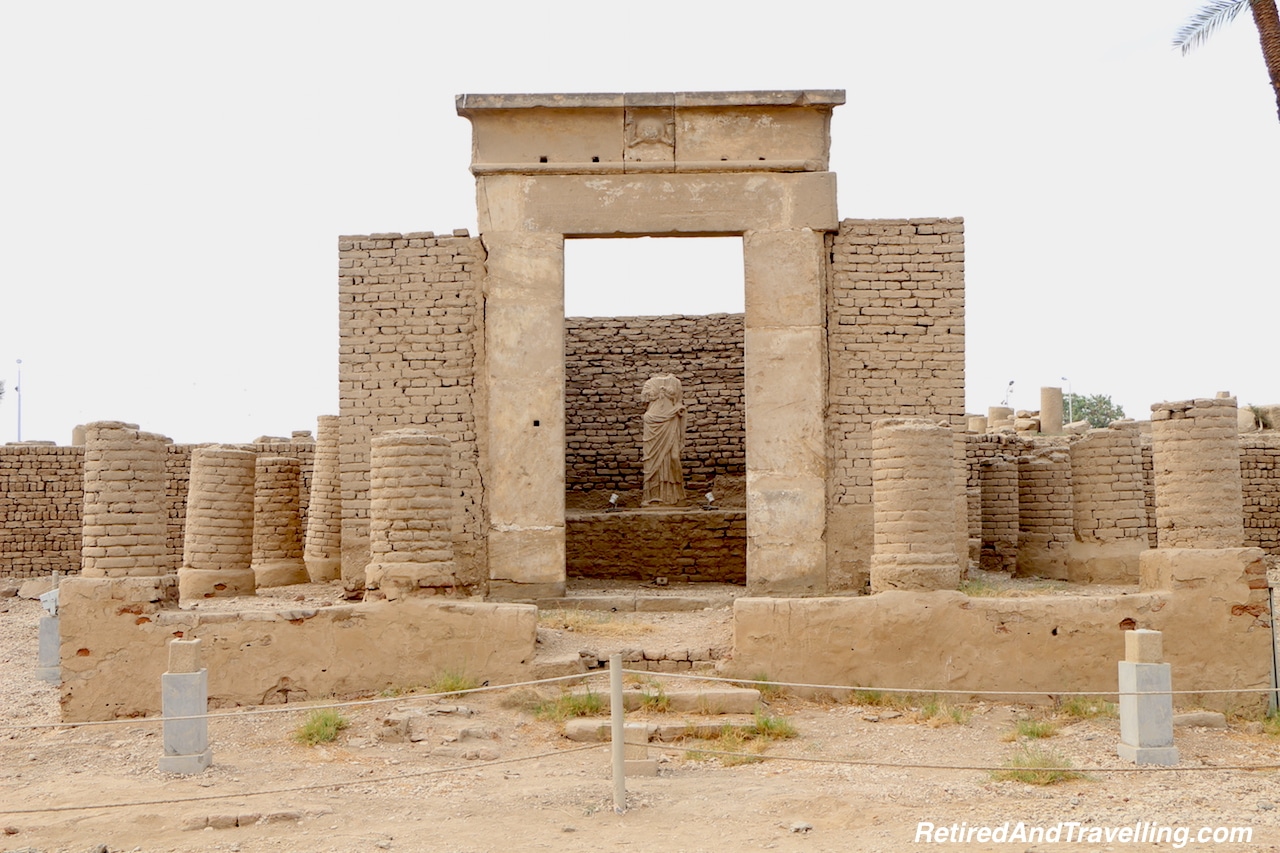 Strolling With the Pharaohs

As we entered the Ramses II Court, we could see the start of a long series of statues for the pharaohs at Luxor Temple. Statues were placed alternating with the columns. If you looked very close, you would again find the very small statue of the queen at the feet. The “little woman” was in her place! 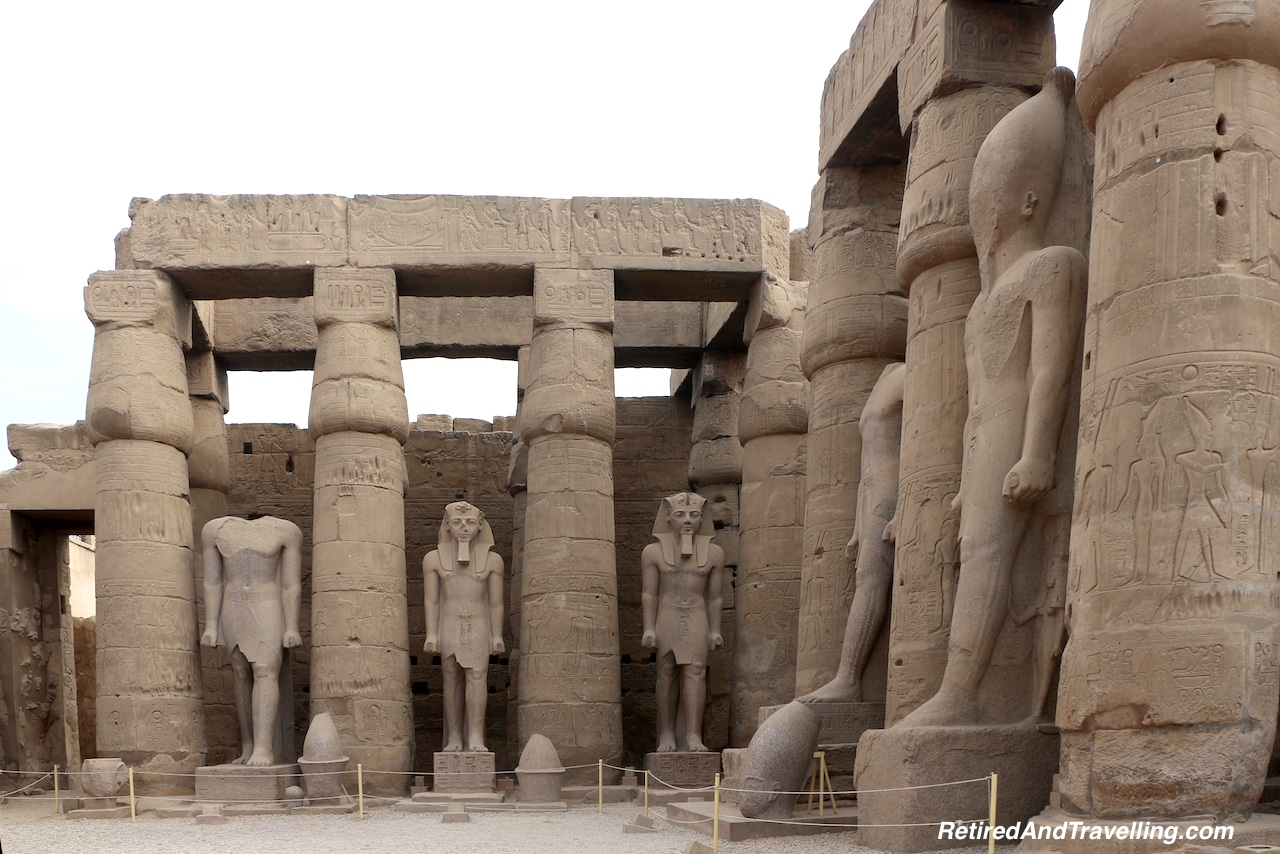 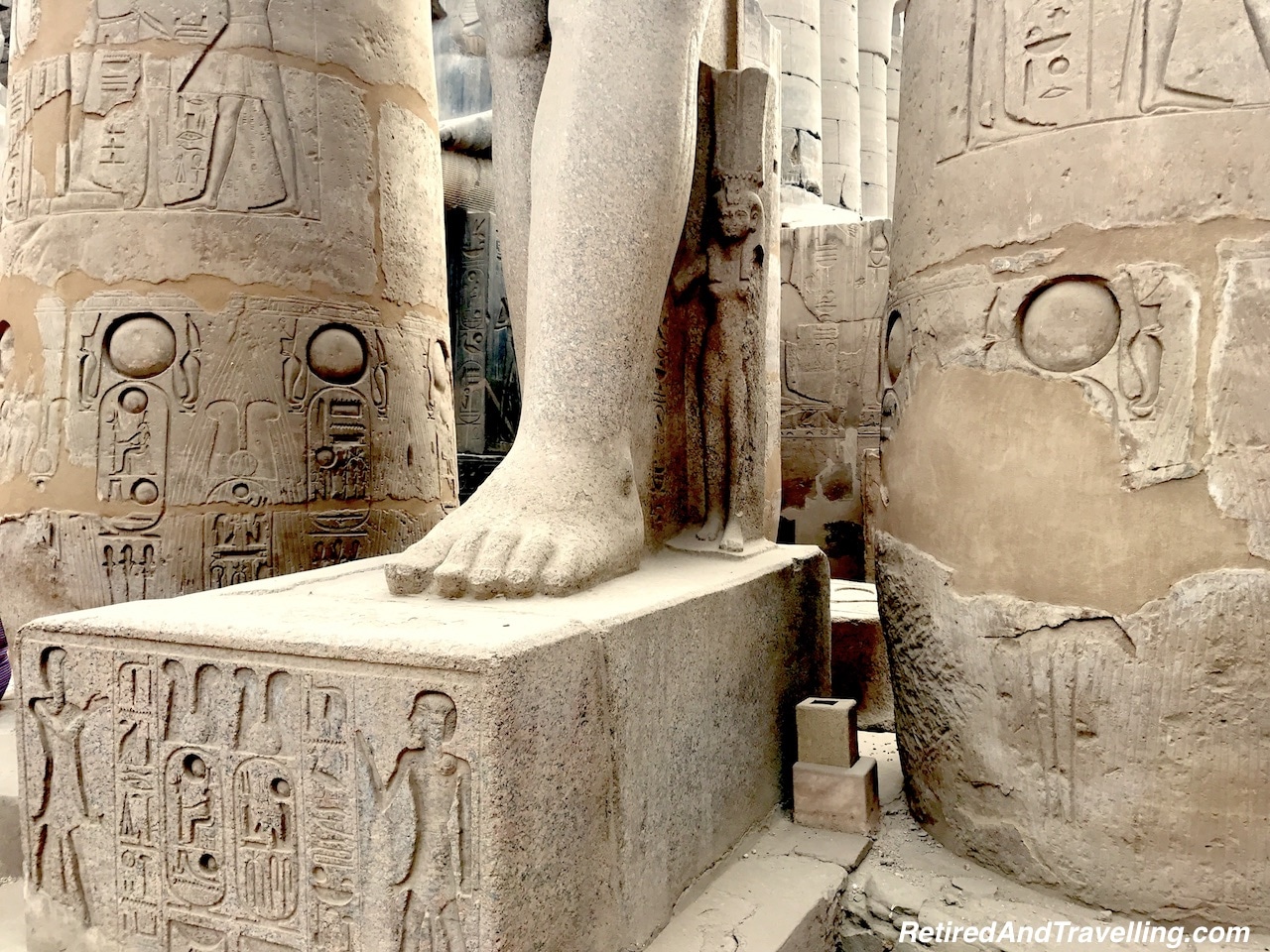 At the end of the room we found more large statues of Ramses II seated. One of the statues was almost intact. You could see the detail in the carvings including the little queen at his feet again. 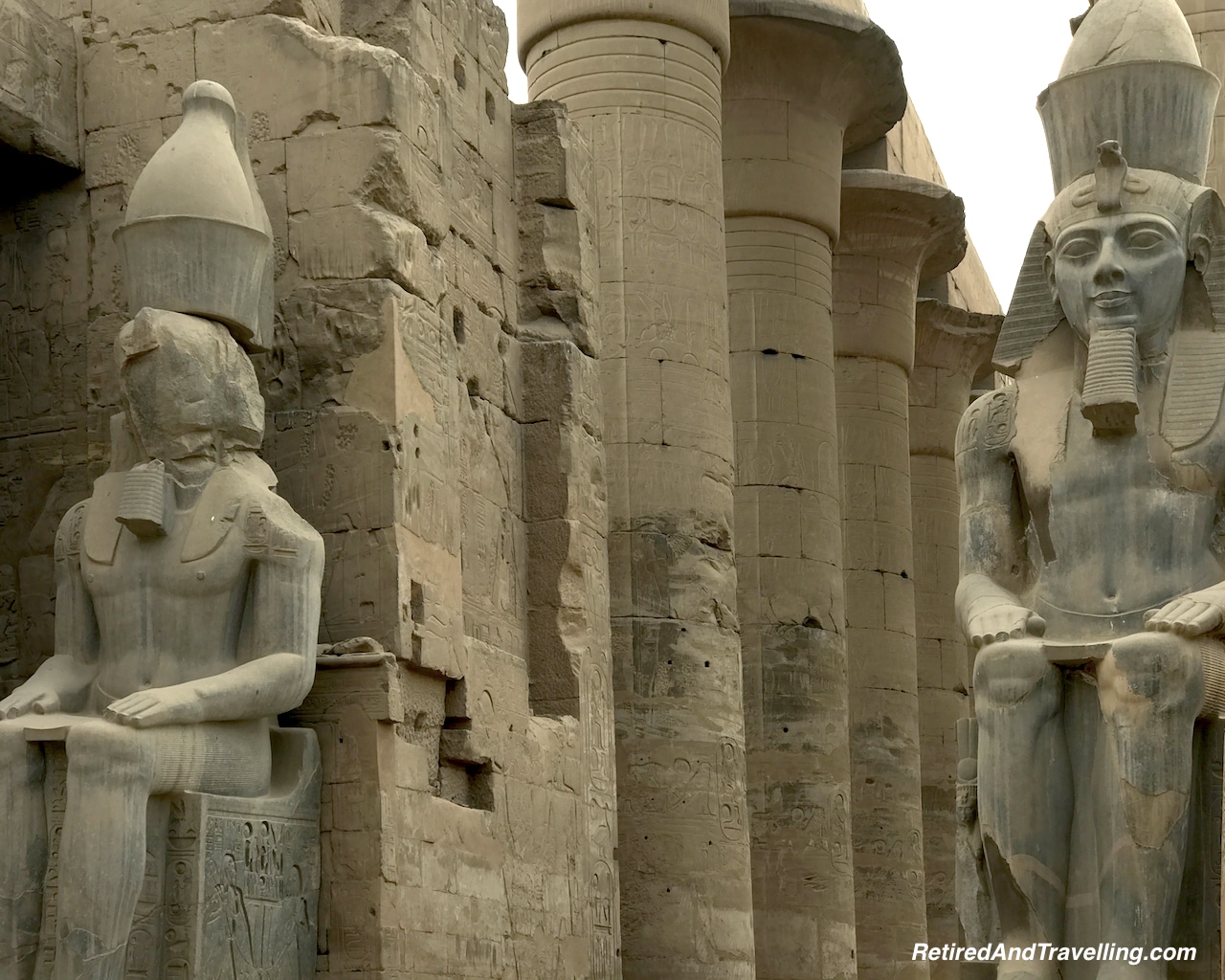 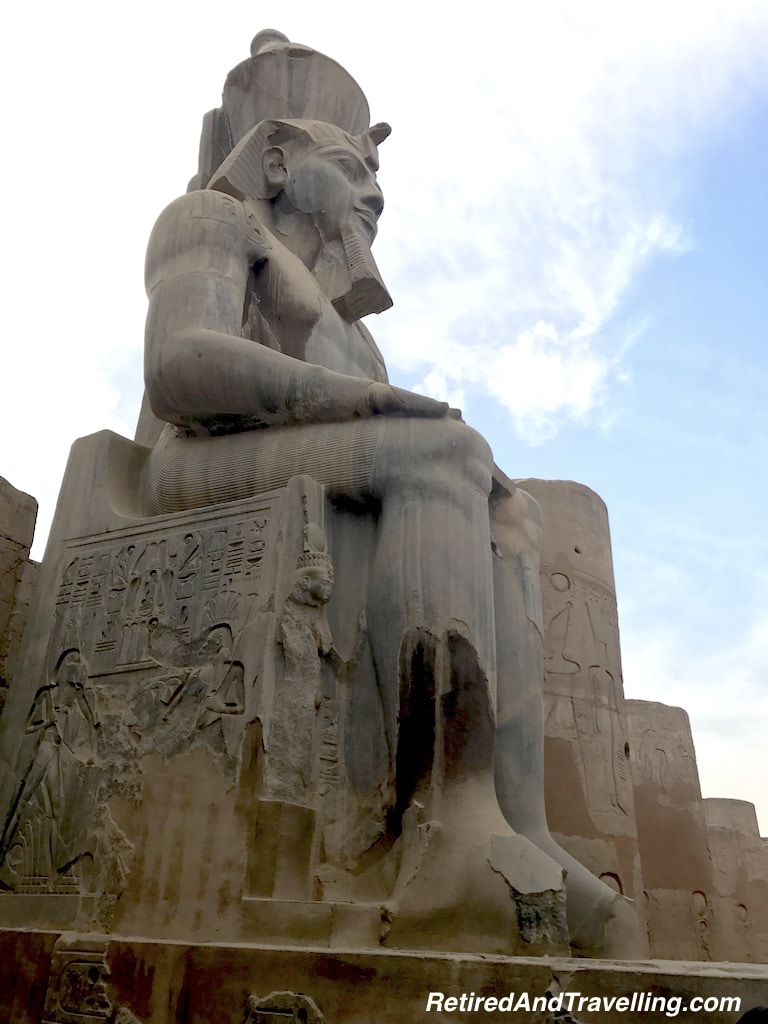 If you wandered further into the temple, you would eventually find a statue with the queen seated beside the pharaoh. 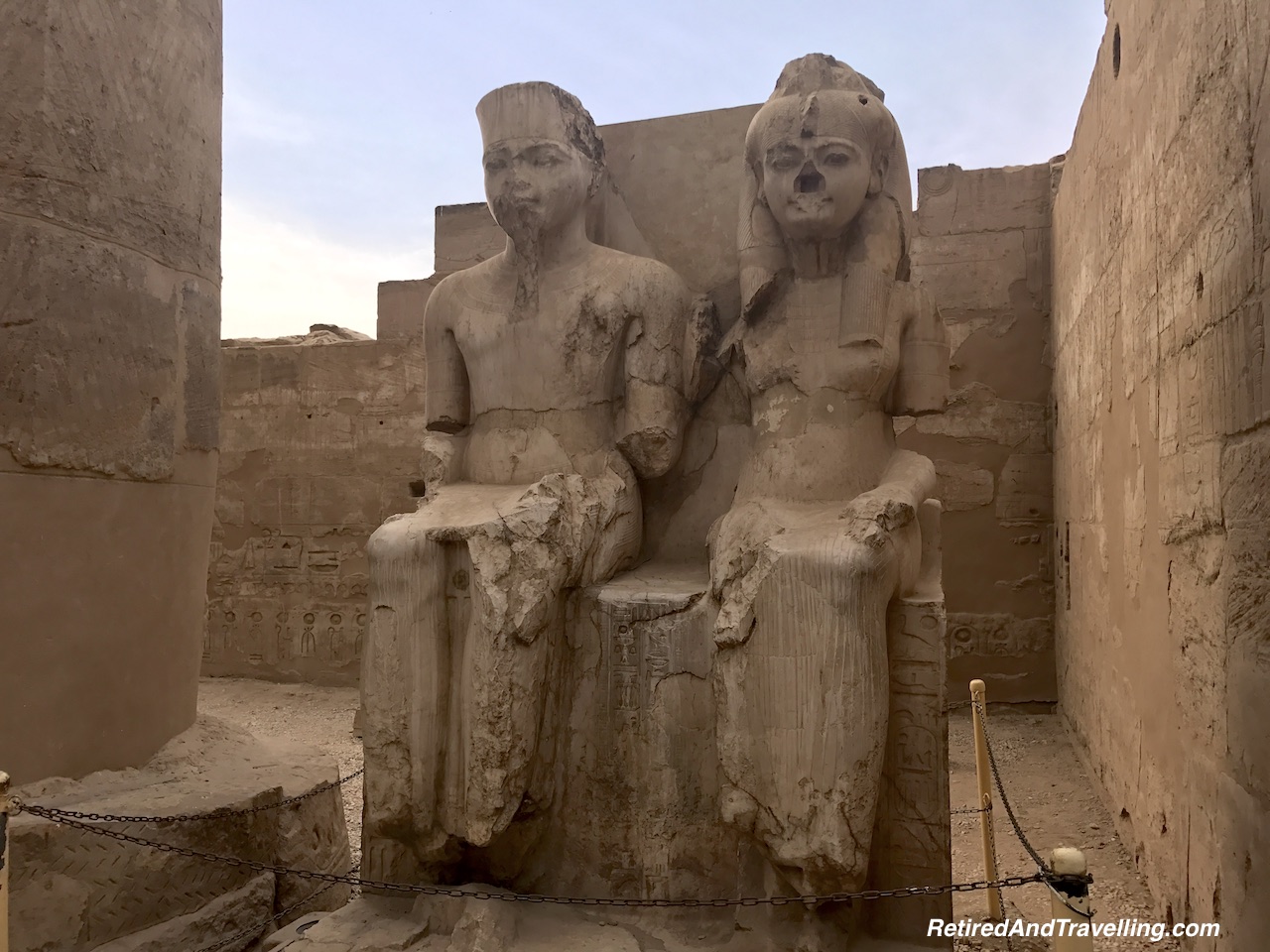 A History of Many Rulers

While most of this temple provided an insight into the ancient pharaohs at Luxor Temple, you could also see remnants of the various nations that had used this temple over the years. The Abu El-Haggag Mosque stands high above the ruins. It is a reminder of the time when the Muslims used this site. 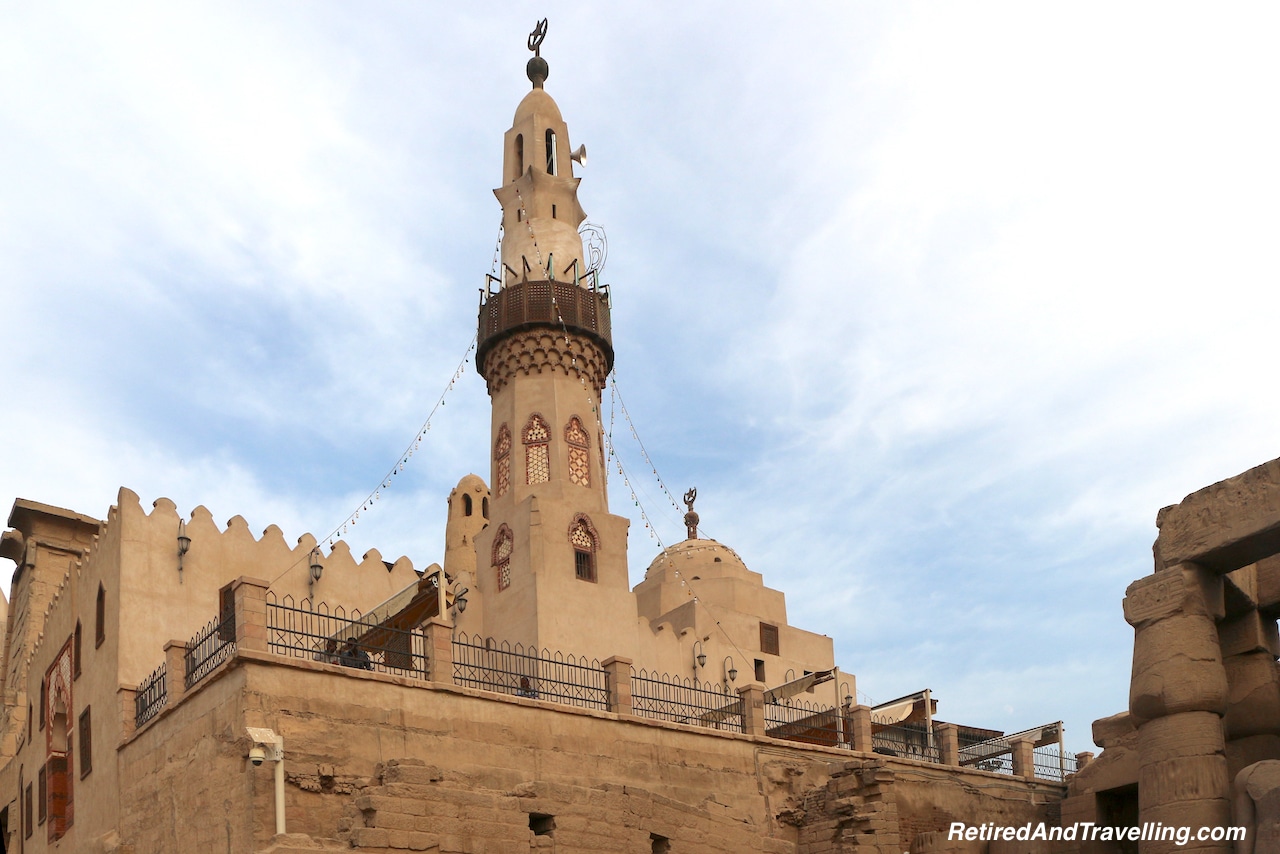 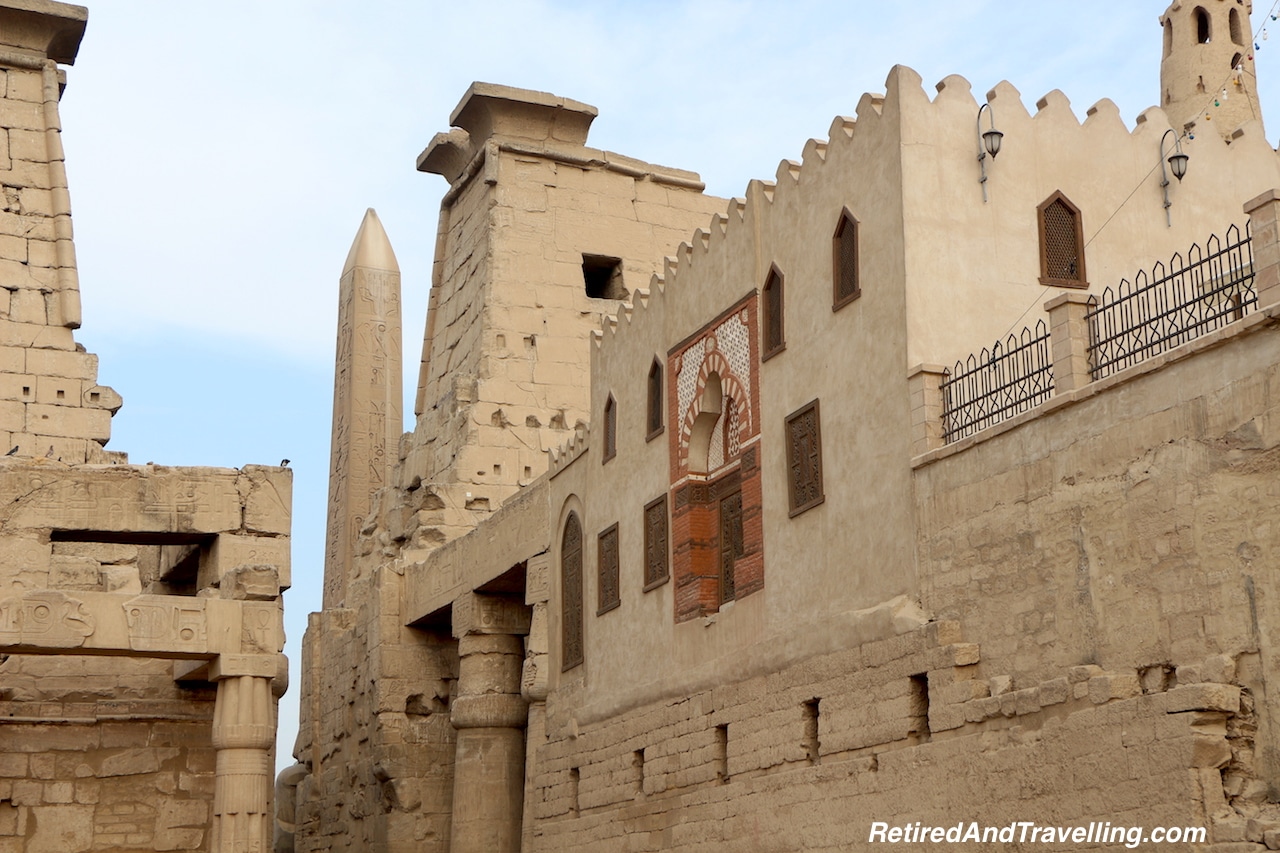 The Stories of the Pharaohs

When you reach the end you will enter the Amun Sanctuary. The walls were covered with the stories of Amun and the pharaohs at Luxor Temple. 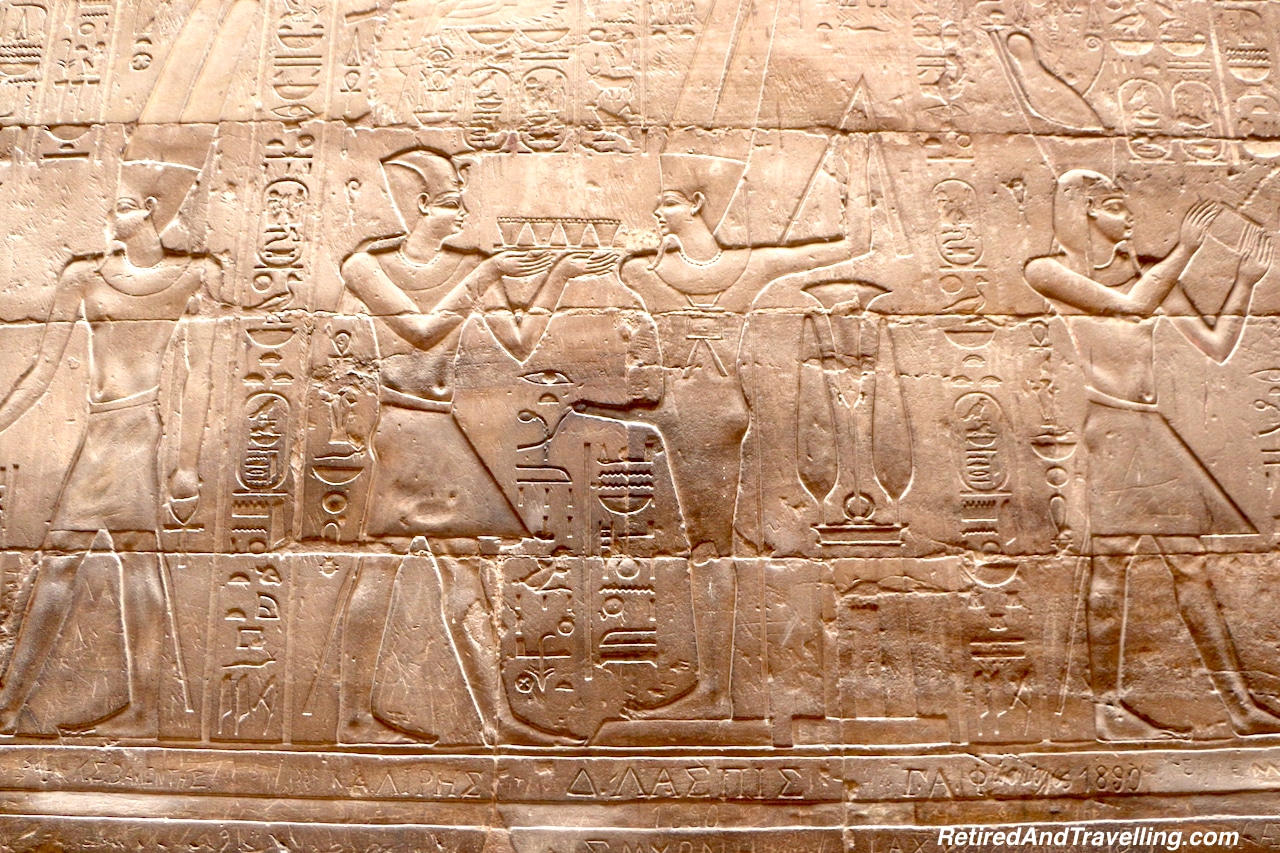 And in this last dark corner, you could see remnants of the brilliant colour that must have covered much of the walls. 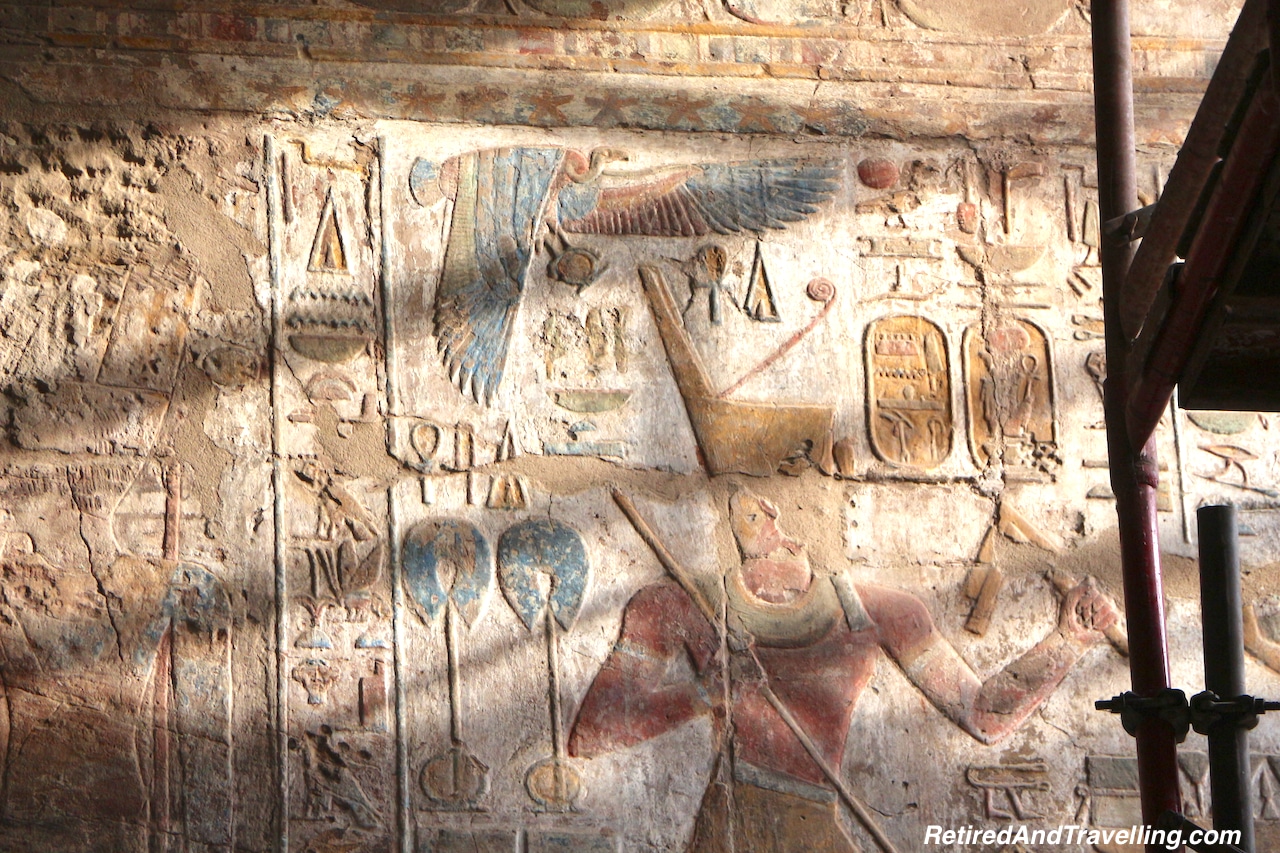 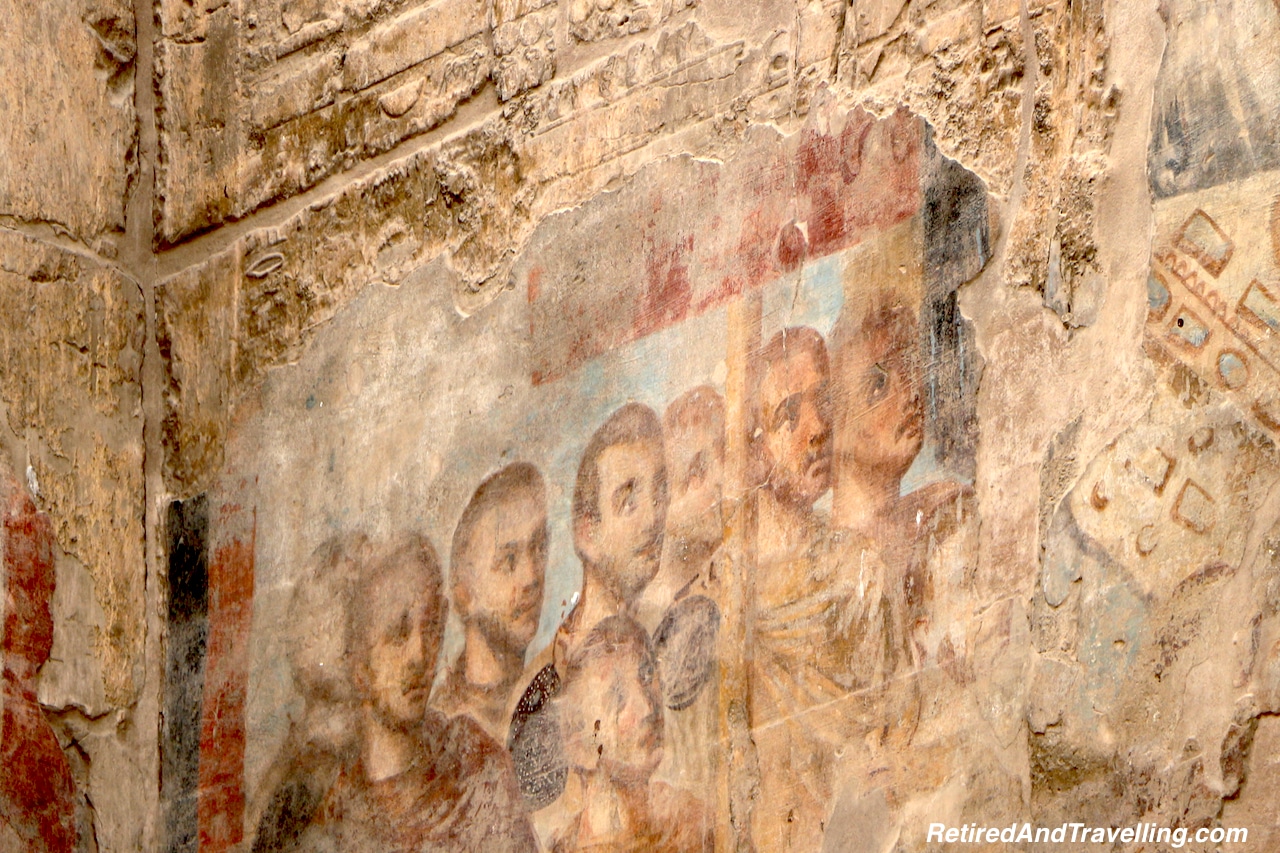 It is great to be able to walk through this outdoor museum. Being open to the elements has taken its toll as each year more of this amazing history decays. But if you look closely you will find all kinds of gems and hints about the life of this interesting time in history. This was truly a tribute to the pharaohs at Luxor Temple.

We were glad to have the opportunity to visit this temple at the same time as we visited the Karnak temple. It was a great introduction to our tour of the temples and tombs of Egypt.

Did you tour this tribute to the pharaohs at Luxor Temple? What part of the temple intrigued you the most?