A Fun Afternoon With A Sake Tasting At Sea

We had a busy schedule when we cruised in Japan with Windstar Cruises. We finished our visit to Hiroshima and had some time at sea. And there is always a lot to do on a cruise ship when you are at sea. We love to try food and drink activities on these lazier days. We enjoyed Italian wine tasting when we did a transatlantic cruise. On this Japan cruise, we just had to do a sake tasting at sea. 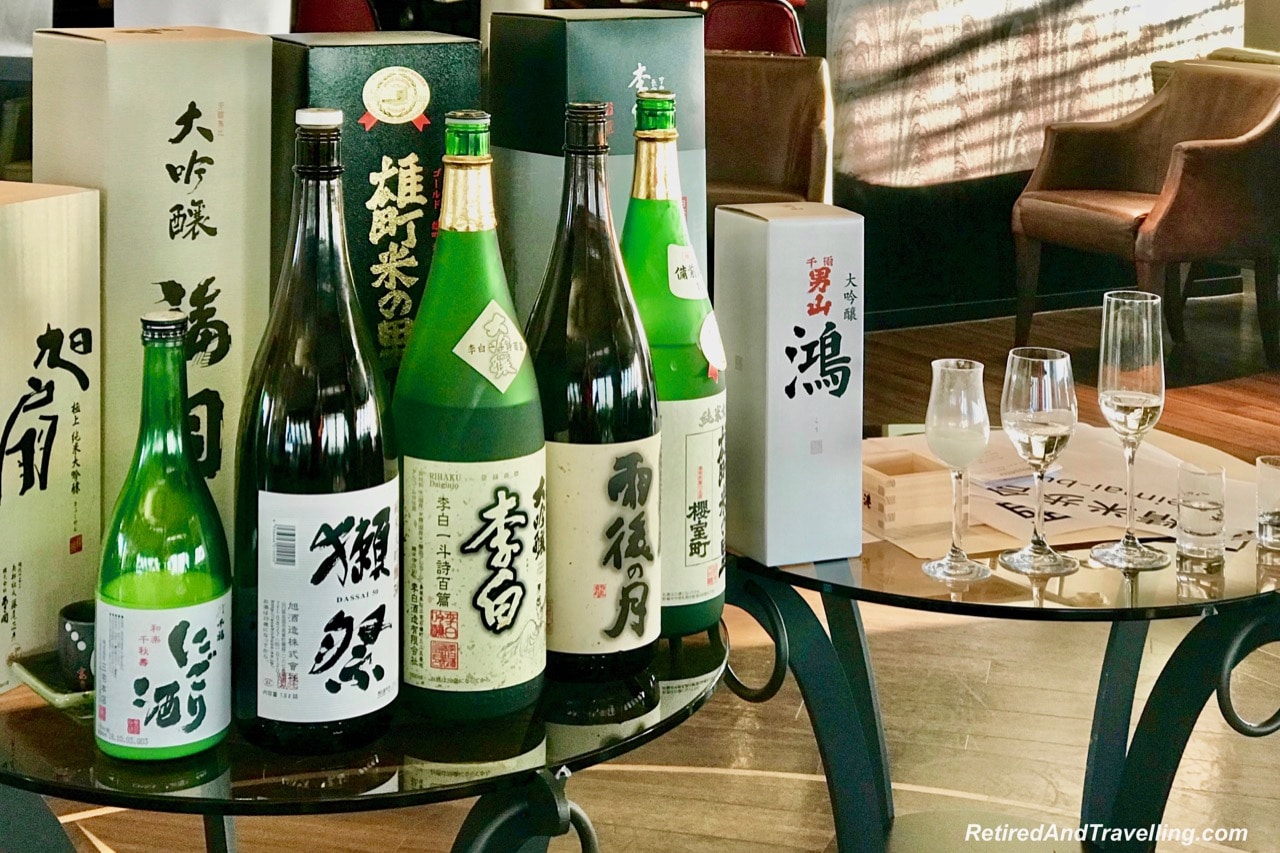 James, the GM on our Windstar Legend ship, was a big sake expert. He wanted to teach us all that he knew on this sake tasting at sea. 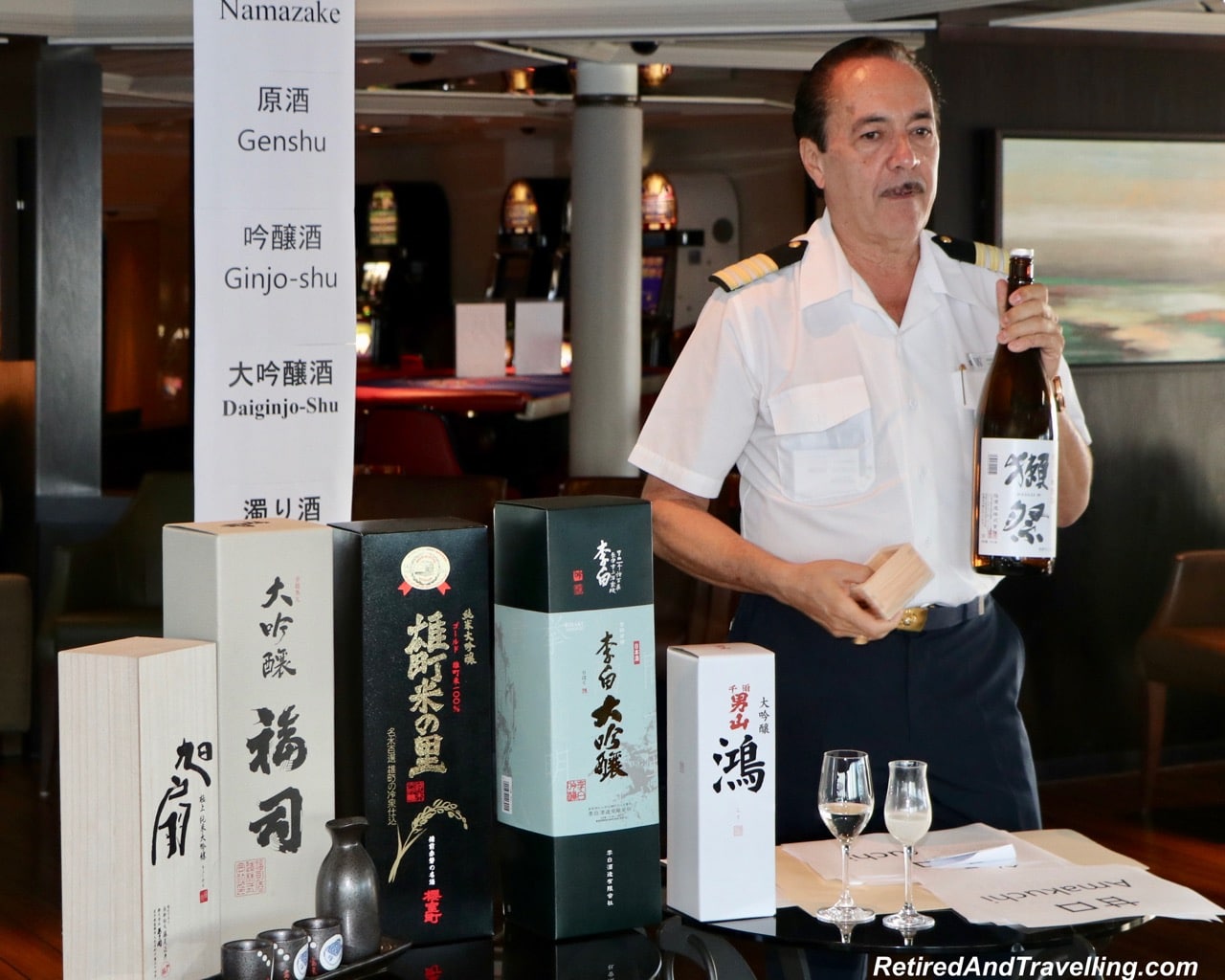 We have had sake a few times. It was the perfect compliment to Japanese food when travelling. We knew from our visits to Nobu that really good sake should be served cold. But that was the extent of our sake knowledge when we started our sake tasting at sea. 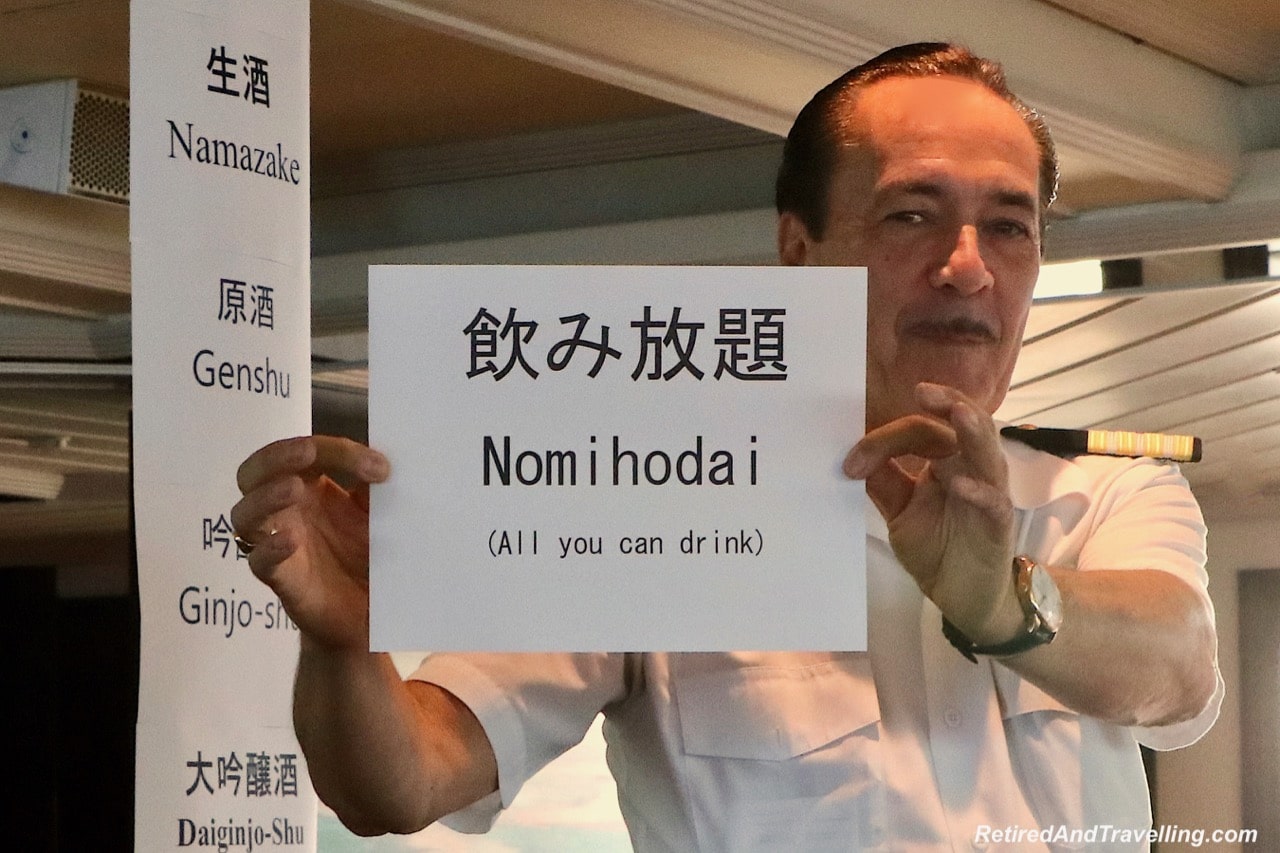 We learned all this and more when we did sake tasting at sea.

The Process To Make Sake

We learned a little about the process to make sake. The rice is cooked and then kept warm as yeast is added to convert the starch to sugar. Yeast is added to covert the sugar to alcohol. And then the sake is pasteurized. The flavour of sake comes from the water, mold and yeast. Most people say it is the water that makes the big difference. 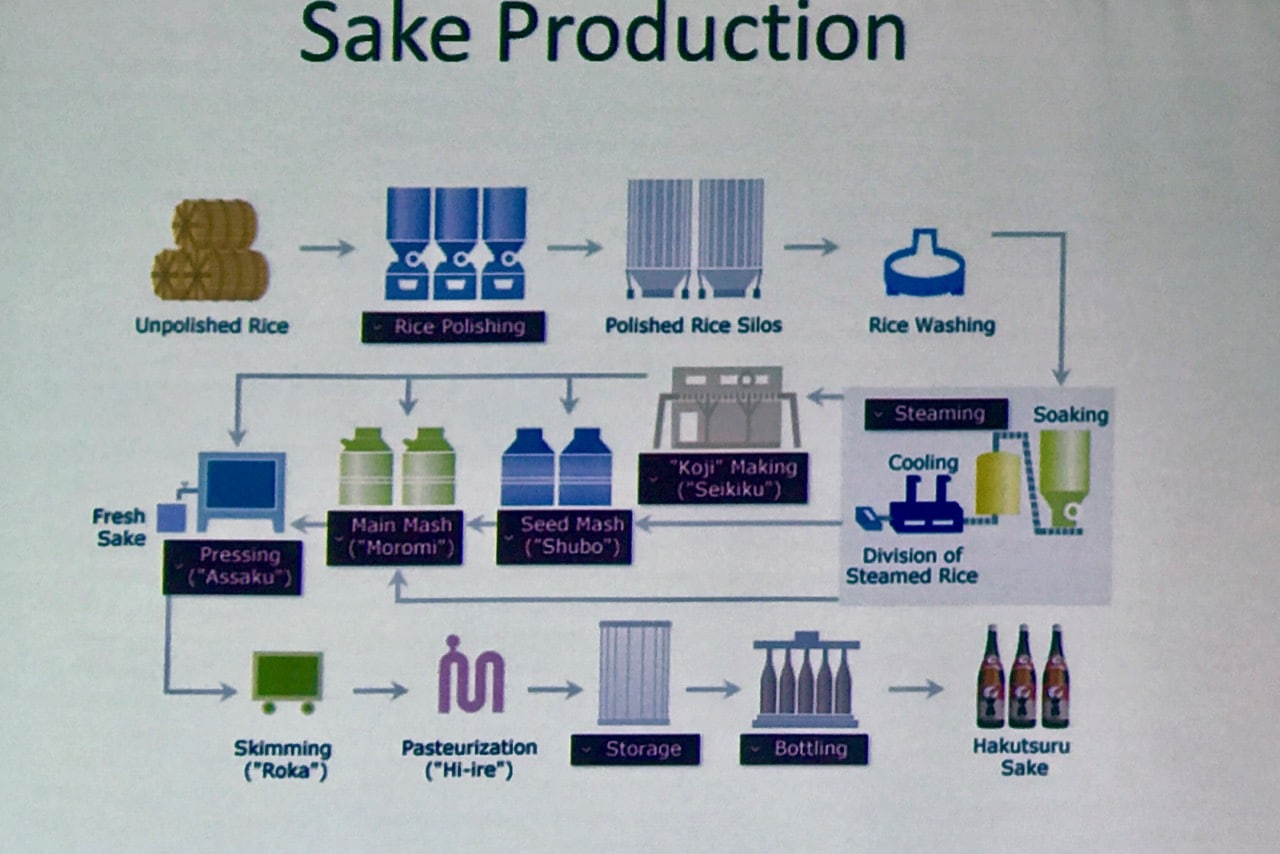 The other interesting thing we learned was that there are two major kinds of sake. For Junmai-shu (means “pure rice”), just rice and water is used. For Honjozo, alcohol (typically vodka) is added. This was started during the war when rice was scarce to stretch the production. 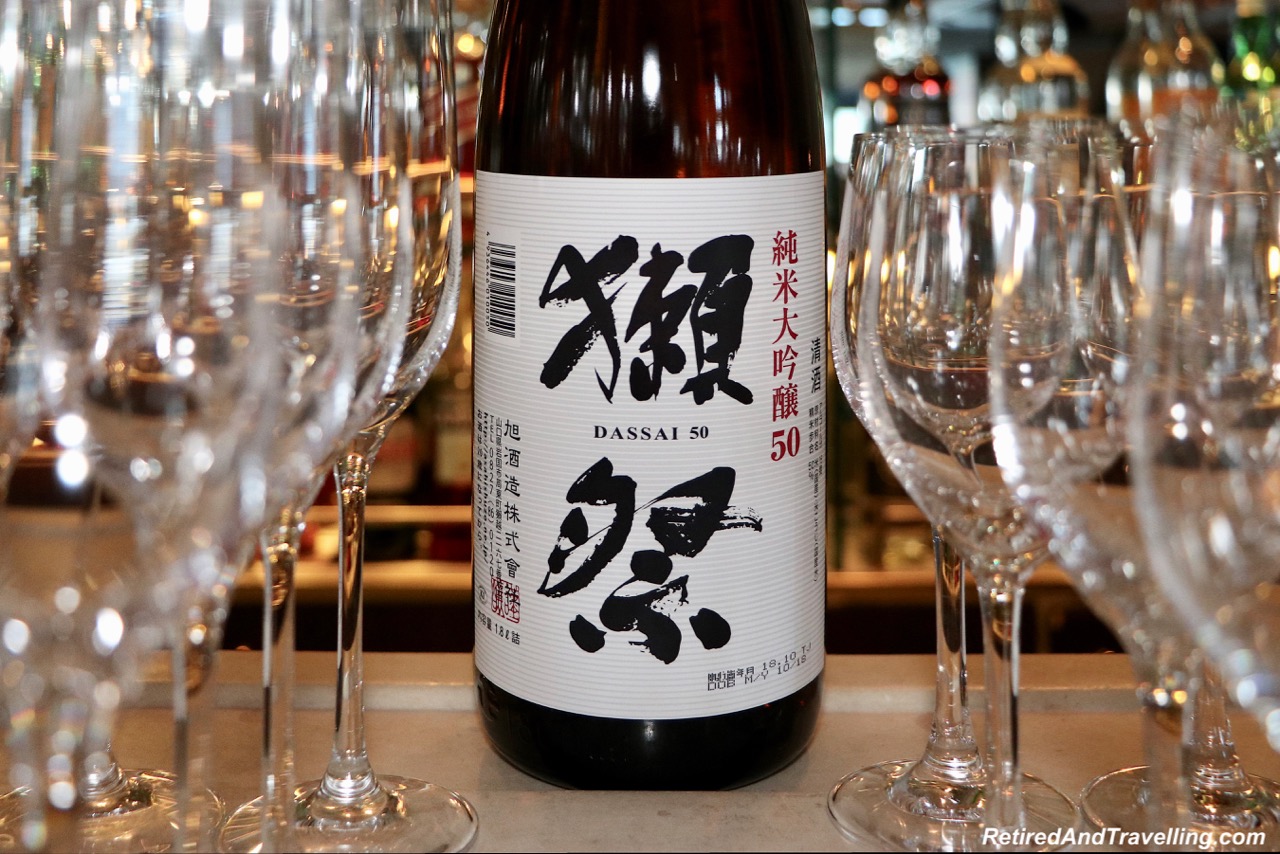 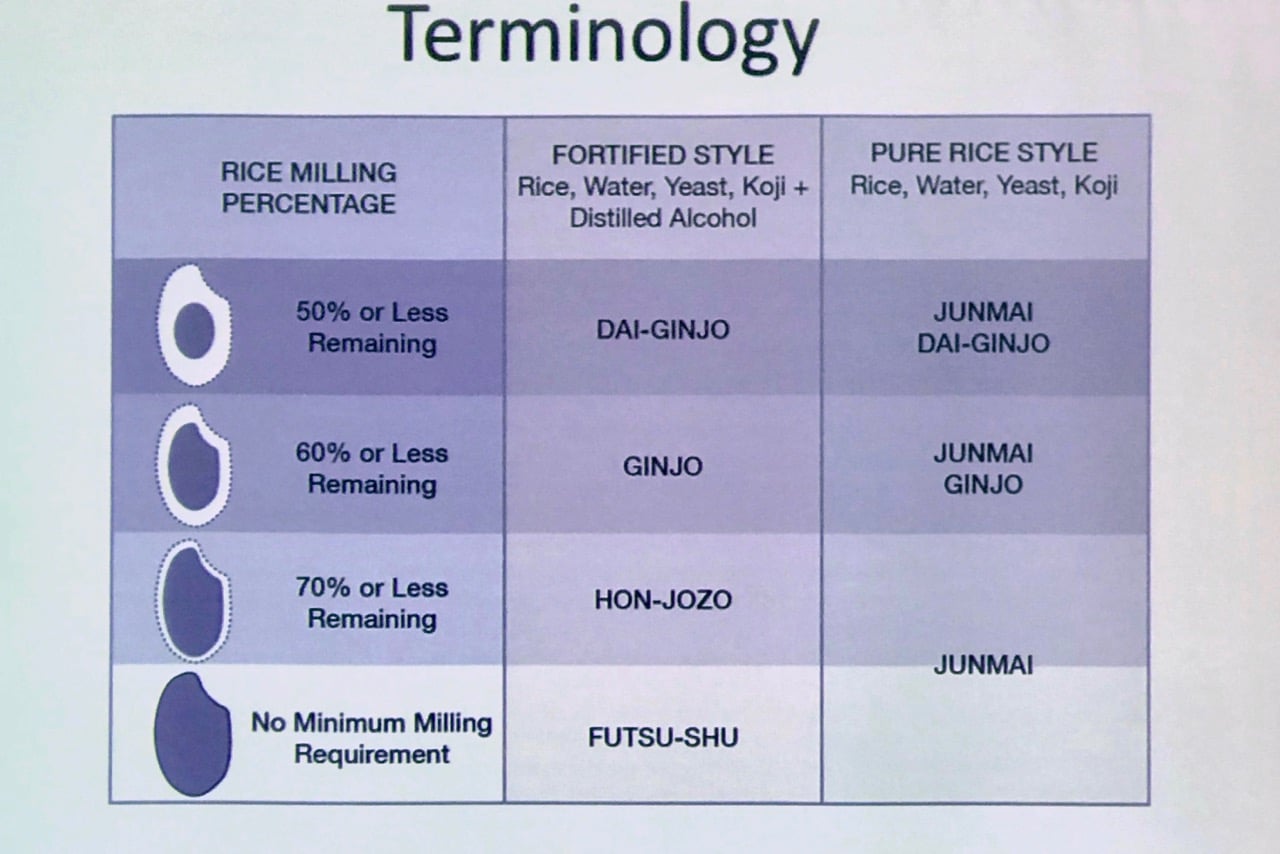 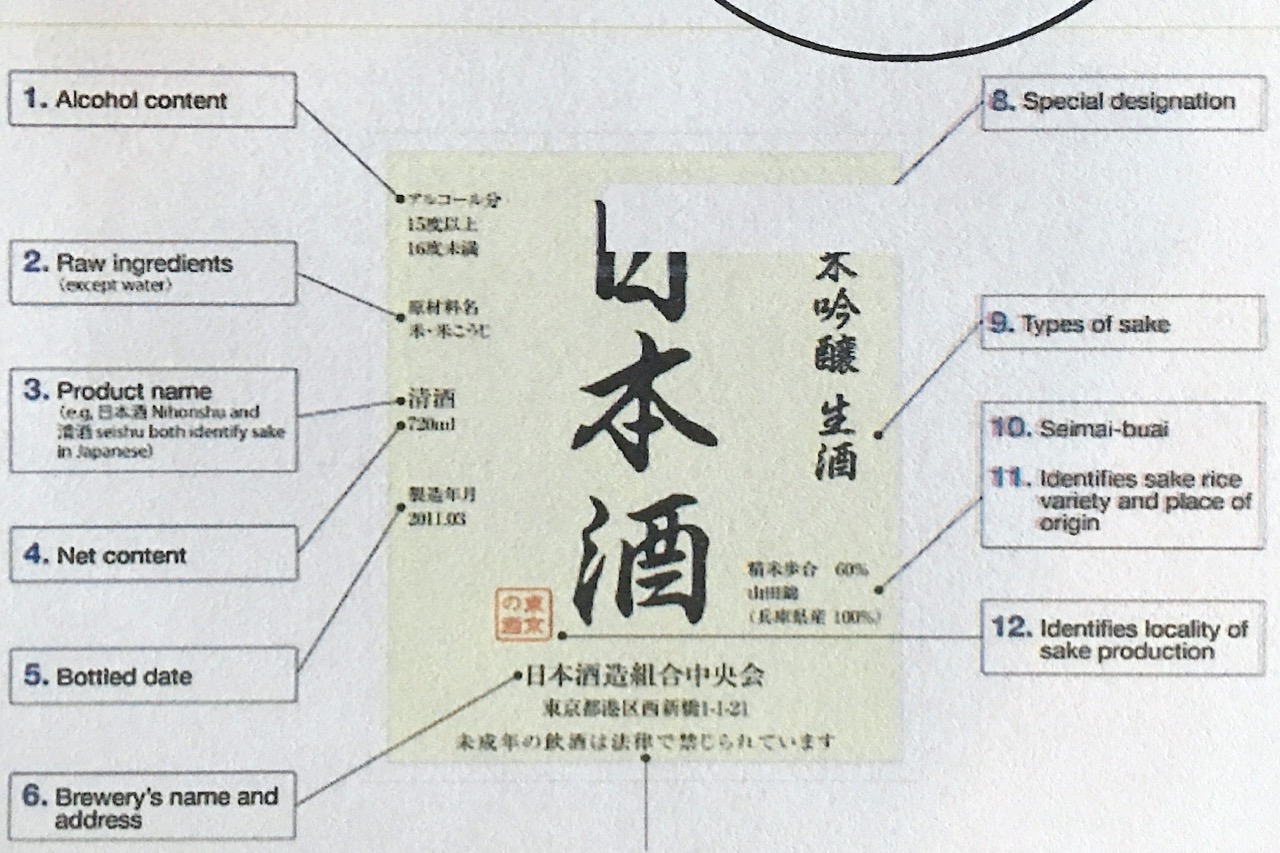 The final thing we learned was that sakes labelled as “Tokobetsu” were “special”. Often this meant that flavours were added.

With all of this information at hand from our sake tasting at sea, we would now be able to select a great sake.

Through the course of our sake tasting at sea, we got the chance to sample 5 different sakes: 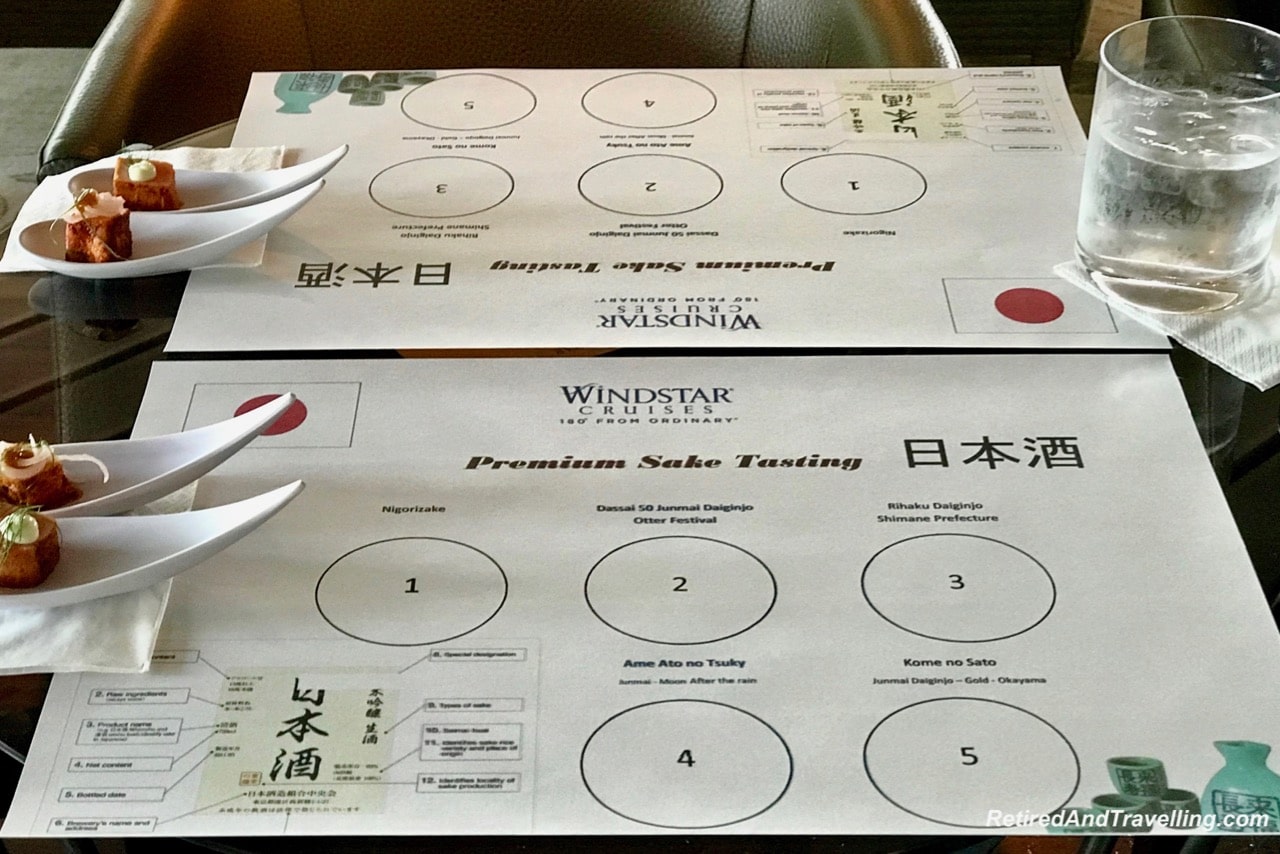 I found the Honjozo versions had too strong an alcohol taste.  But then, I am not much of a straight alcohol drinking in any variety. The Honjozo was a milky colour and slightly sweeter than the others. It was really fascinating to see the differences in the clarity. 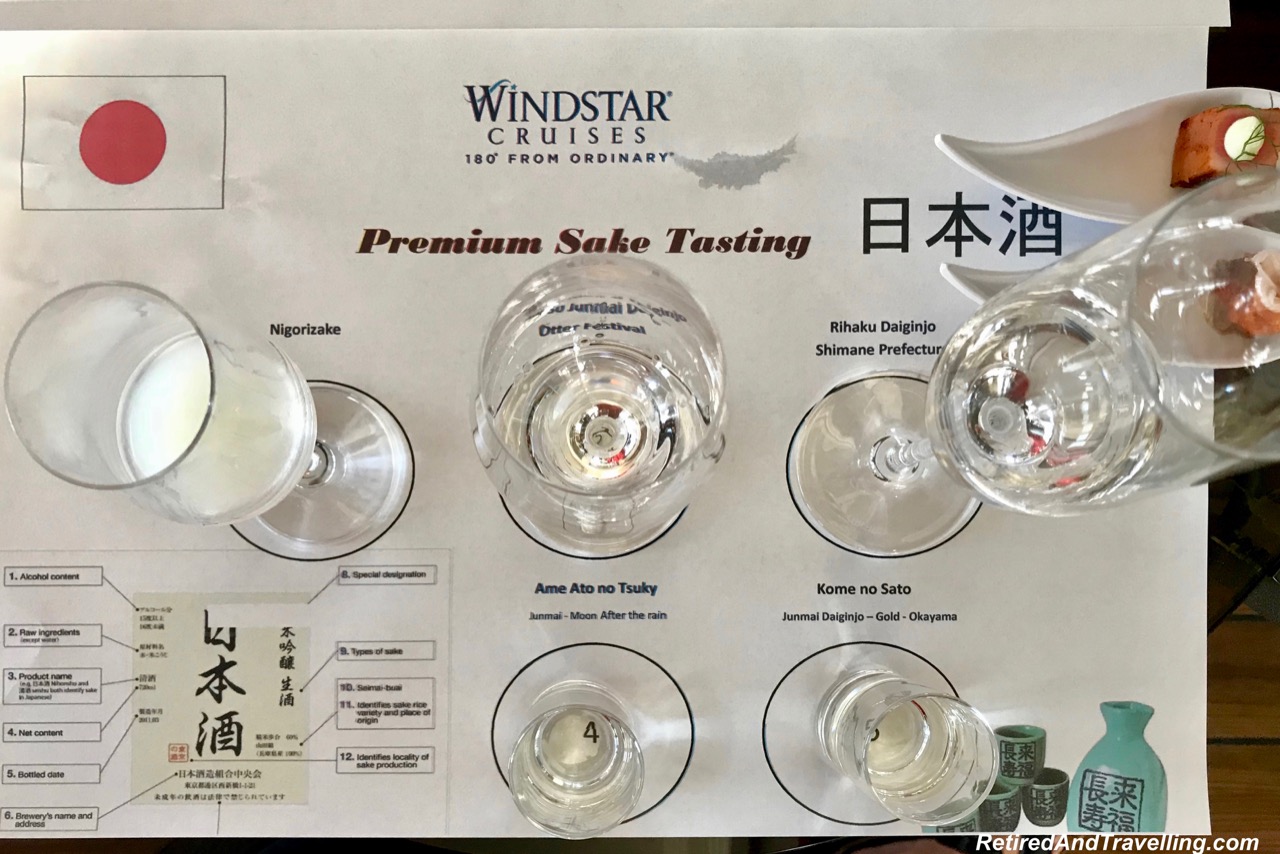 The sakes varied in how fruity they were. And everyone seemed to prefer a different one. We could certainly tell that the Dasai 50 had less rice shell and was far smoother. After tasting them all, I probably liked (4) the best. Maybe I was influenced by the poetic name.

It was great to taste such a variety on our sake tasting at sea experience.

Our place settings had two small food samples beside it. But we were not actually told to try the food with the sake. 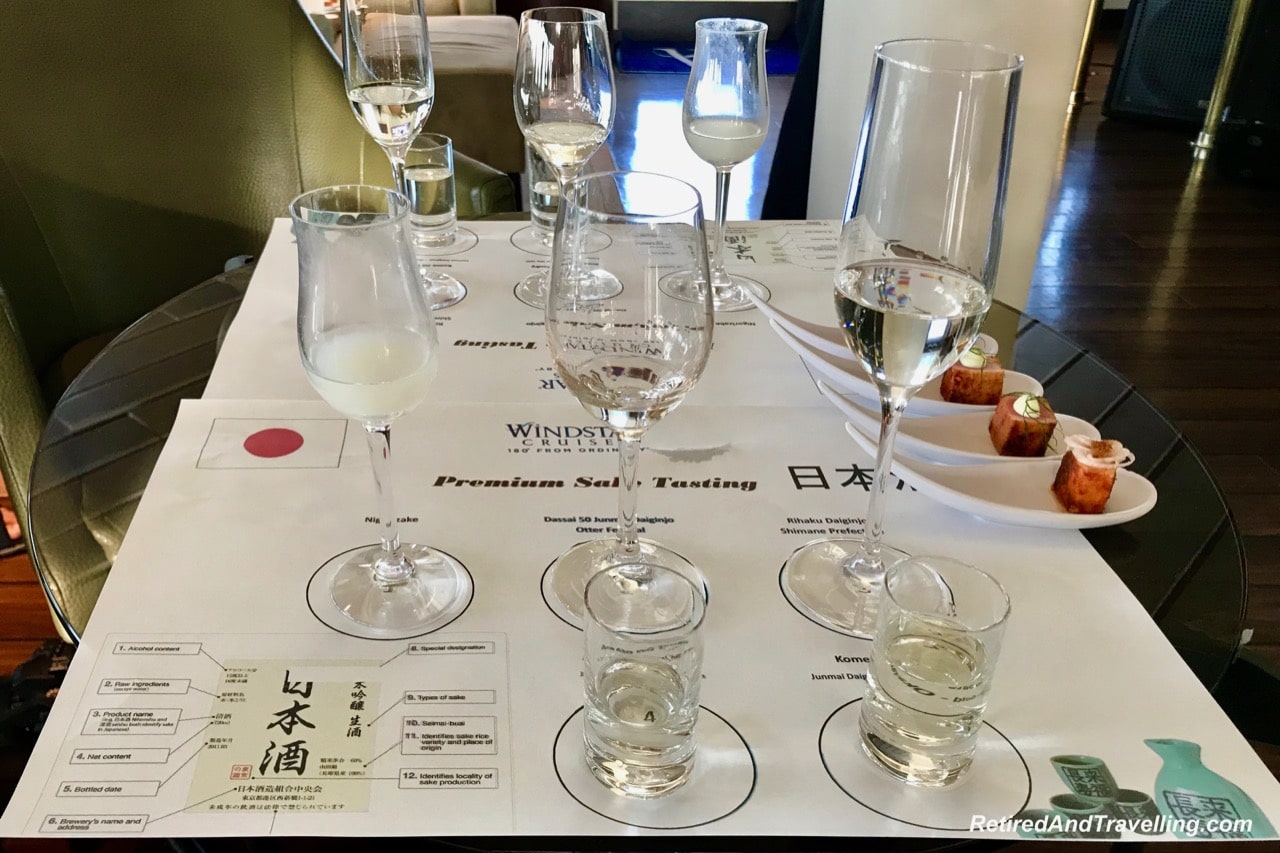 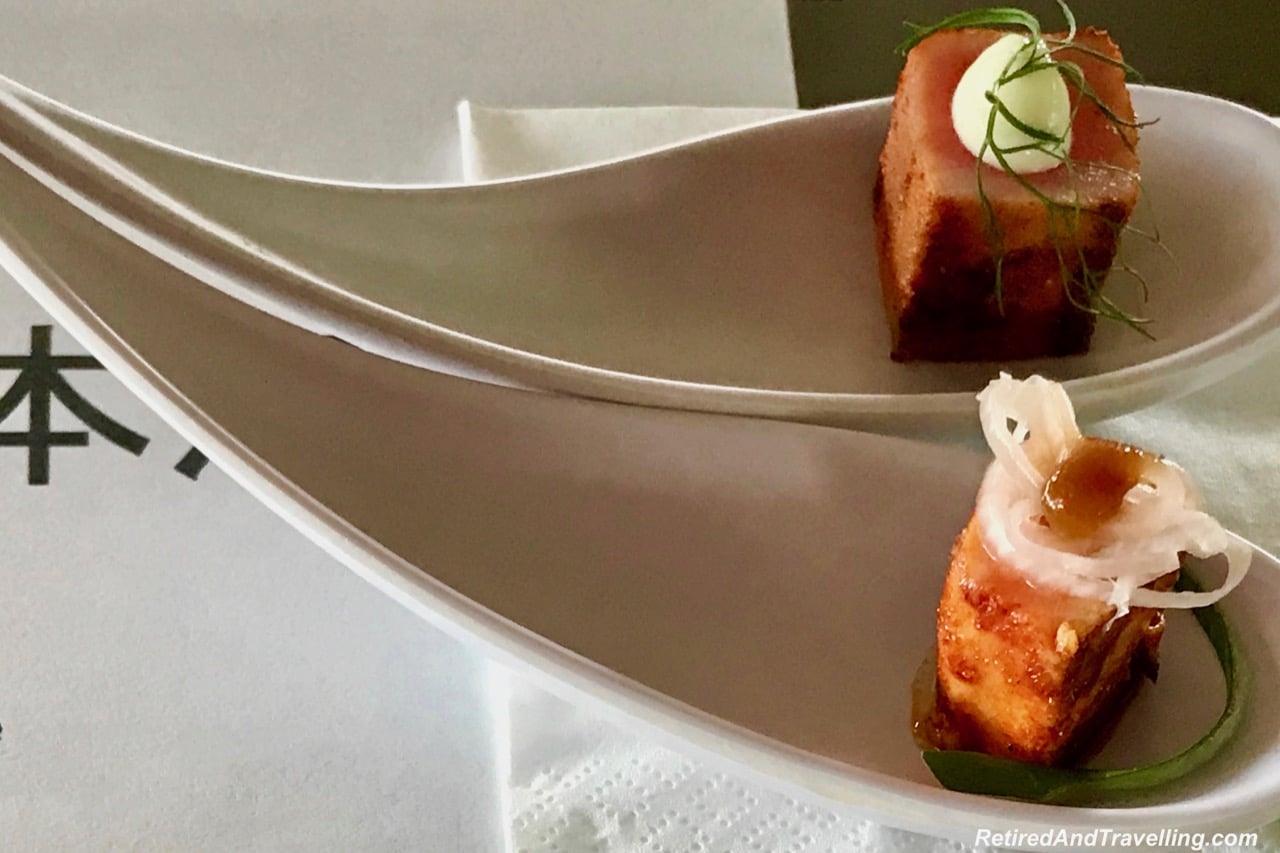 When we asked about pairings, we were told that sake paired best with the lighter foods of Japan – seafood and vegetables were best. But sake is probably not your best choice for rich foods or red meats.

I was sure that the food pairings would really depend on the sake you chose.

Sake Tasting At Sea With Windstar Cruises Was A New Experience

We were so glad we tried the sake tasting at sea on our Windstar cruise in Japan. It was the perfect trip to learn more about this local drink.  And we learned enough to be a bit more discriminating when we next asked for sake in a restaurant.

Have you tried sake tasting at sea? Did you like the sake? 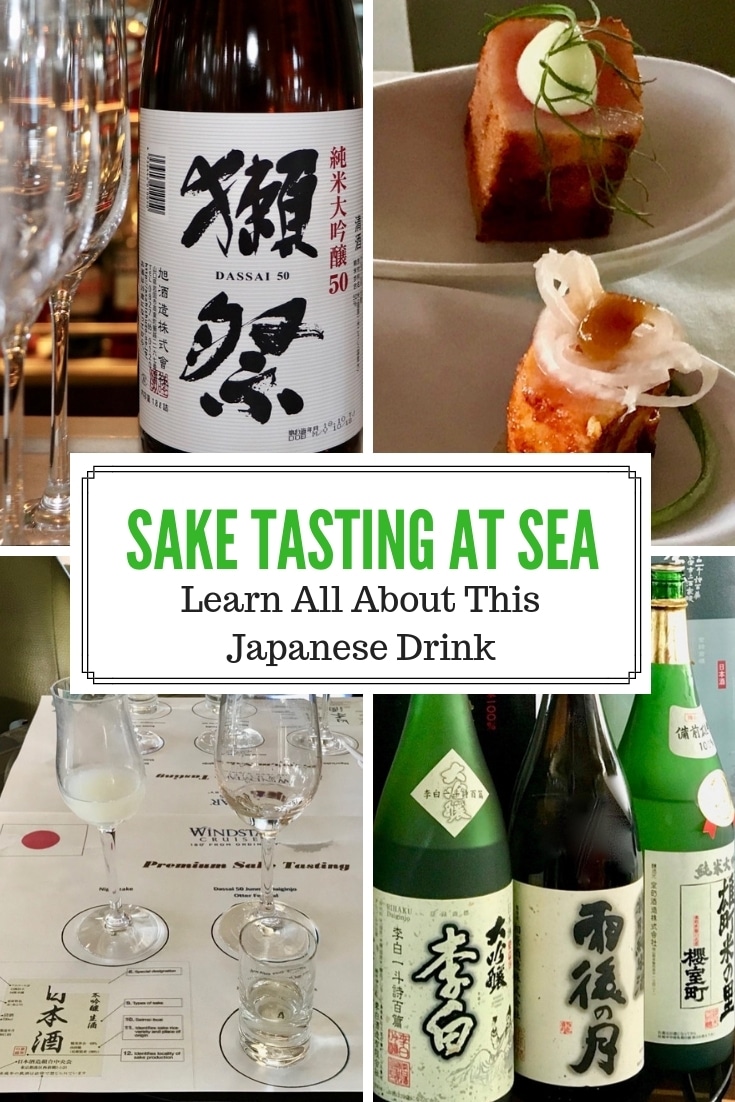 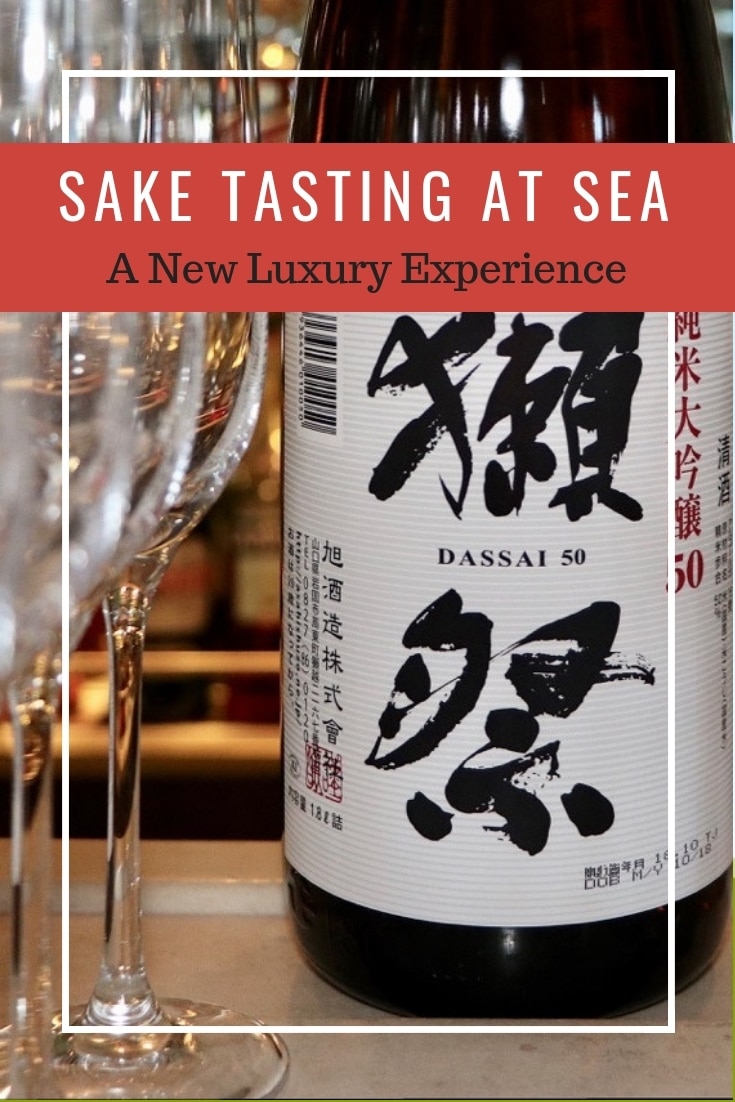 We Chose The Agra Fort for Our Next Adventure We spent a very early morning enjoying the Taj Mahal at sunrise. After a late breakfast at the hotel, we were ready for our next adventure […]

We would love if you could share this!
3
3
Shares

Visit the Mateus Palace We stayed in the Douro River Valley with a great view overlooking the grape terraces. One day we headed back out on the twisty road hugging the hills. We planned to […]

We would love if you could share this!
27
27
Shares

Wine Tasting In Sonoita On The Way To Willcox Arizona

Another Wine Tasting Experience In Arizona Did you know there are multiple wine regions in Arizona? We did our first wine tasting in the Verde Valley outside of Sedona.  On a day trip from our […]

We would love if you could share this!
51
51
Shares