The day dawned bright and sunny so we got out our map of Puglia and picked a direction for our day of travel. This day we headed south from Lecce.  We went as far as we could go, to where the Adriatic Meets the Ionian Sea. From there we headed back up the Ionian coast for sunset on Italy’s west coast in Gallipoli.

We were in search of the perfect beach for a swim.  That quest felt a little like a Goldilocks tale.  One was too rocky, one had too much surf, one wasn’t private enough.  And the final one was by the kelp beds. We put our toes in and while I got splashed so bad by waves that I soaked my clothes.  But we did not swim on this day.

We passed through interesting weather both on the way down and back. It almost seemed like there was a rain band in one spot. On the way down we hit rain and finally understood the “beware of flooding” signs we saw on high ground. As we went up the hill to pass through one little town, we drove through a river coming down the hill.

Santa Maria de Leuca – As Far South In Italy As We Could Go!

By the time we hit the coast we were back in brilliant sunshine. We parked as we entered the town of Santa Maria di Leuca where the Adriatic meets the Ionian Sea. We saw colourful houses on the hills and further up some older part of town. But today was beach day! 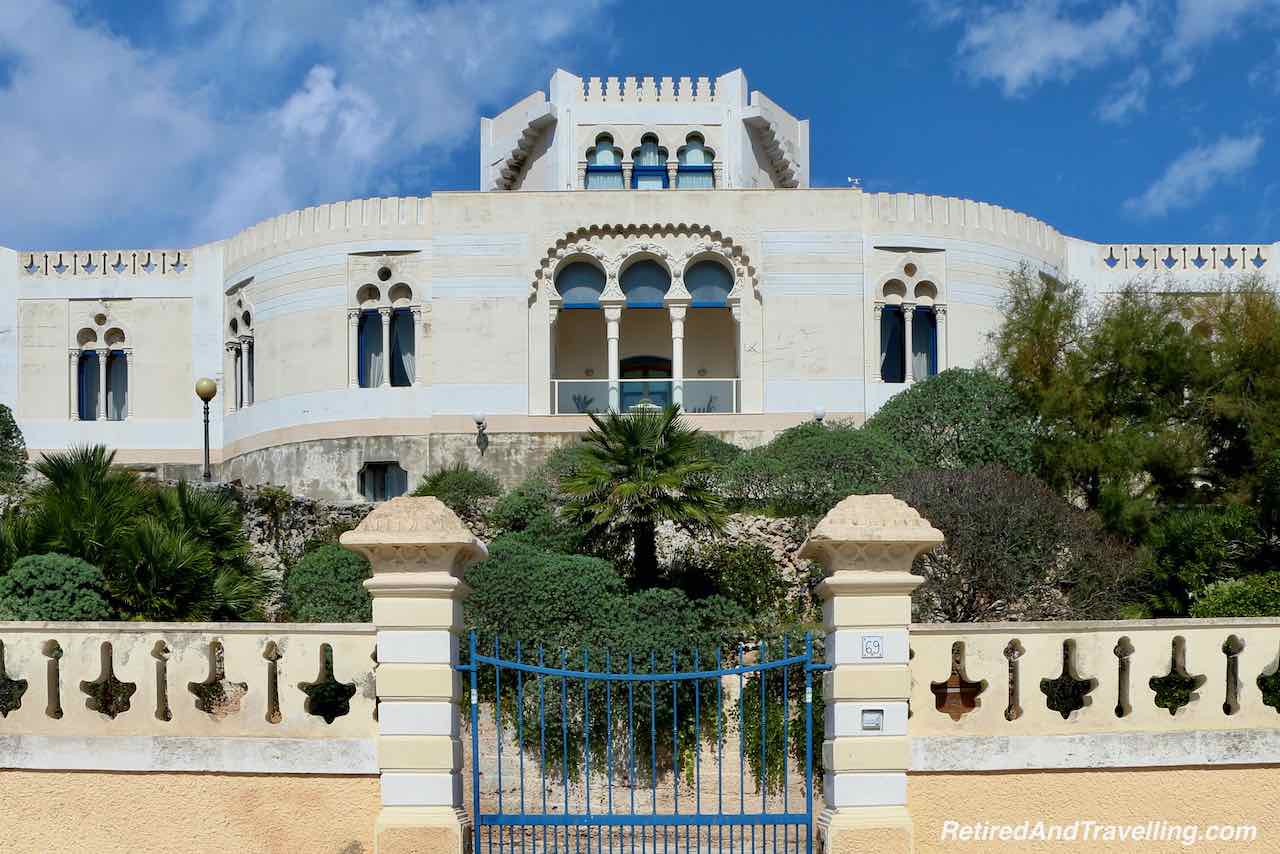 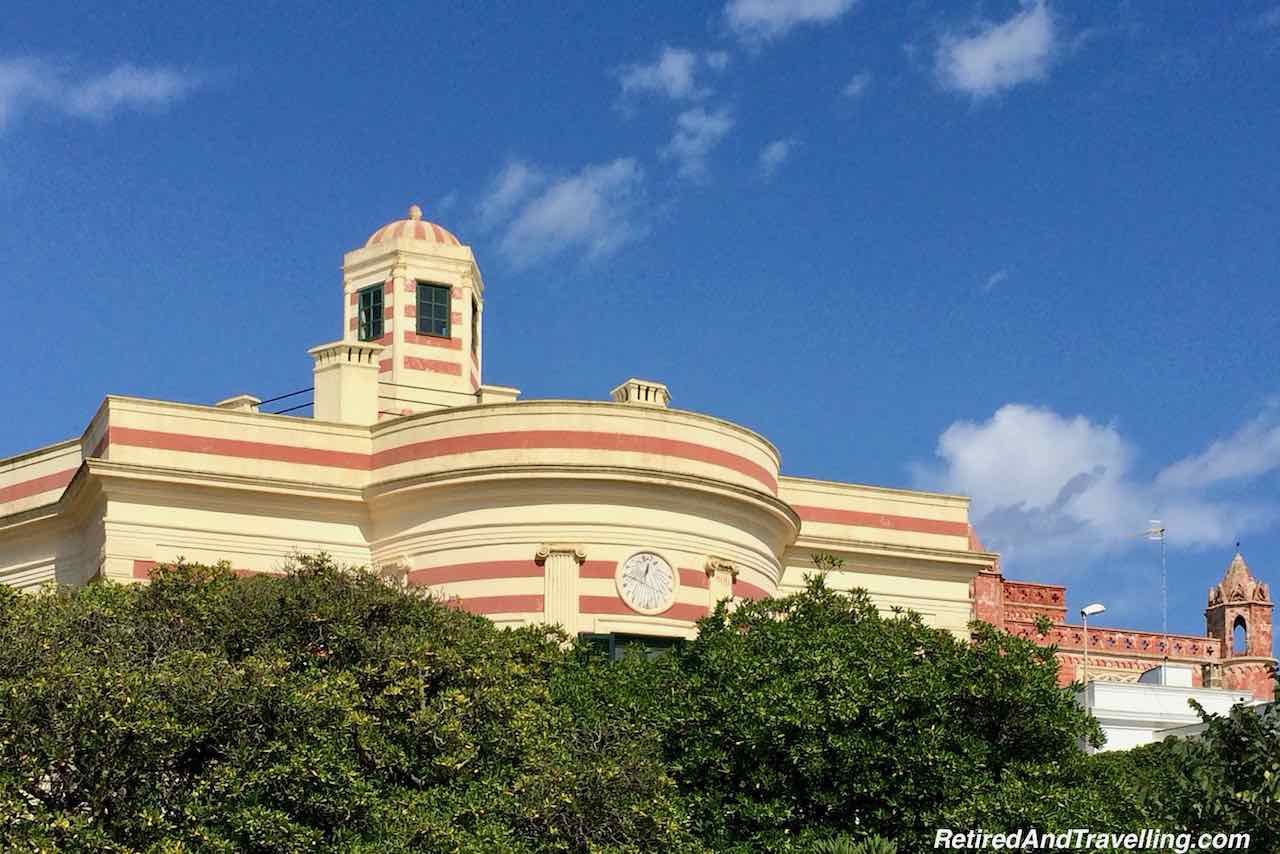 We stopped several times along the sea wall and took pics.  But finally ended up in the main bay. We saw the surfers in their wet suits as they paddled out at the wave line. Every now and then one caught a wave and rode it in.  Then they launched themselves back in and tried again. 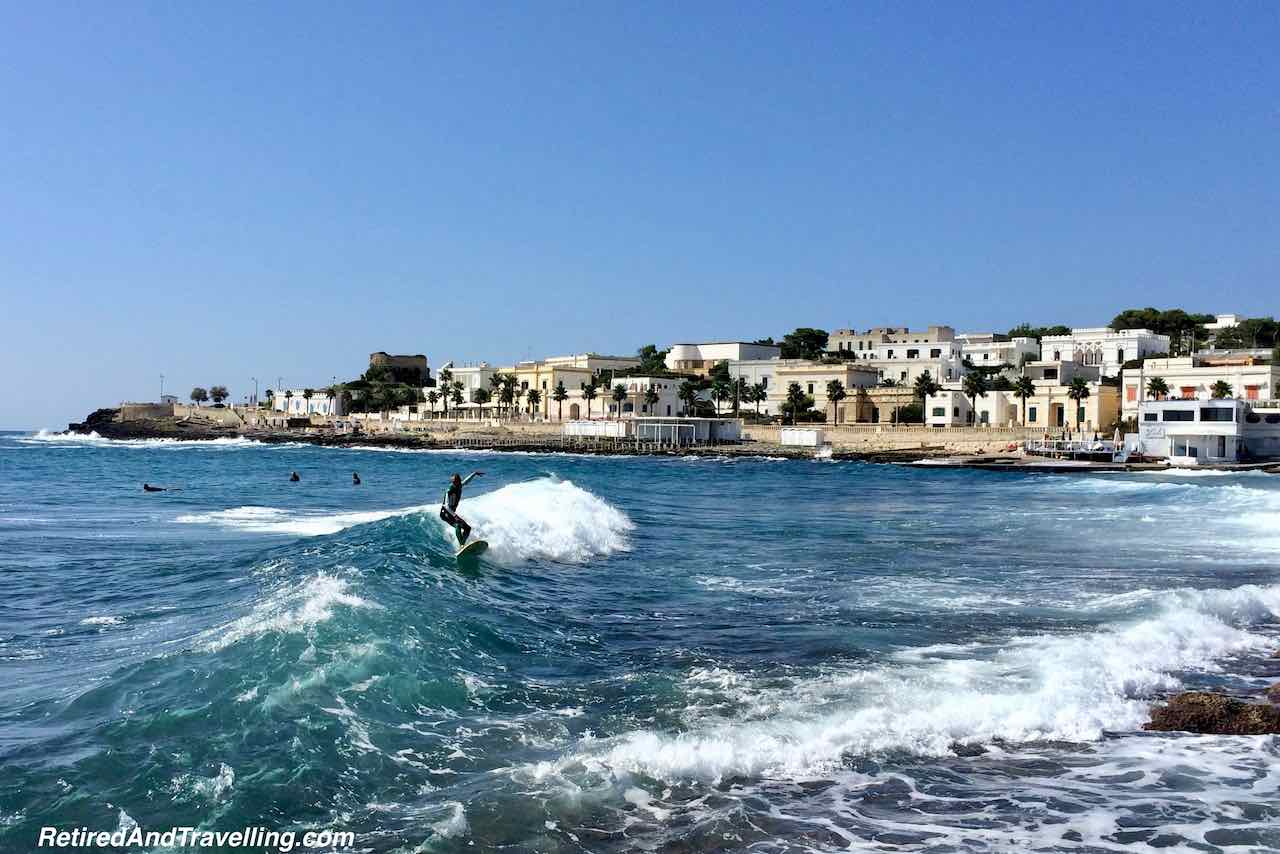 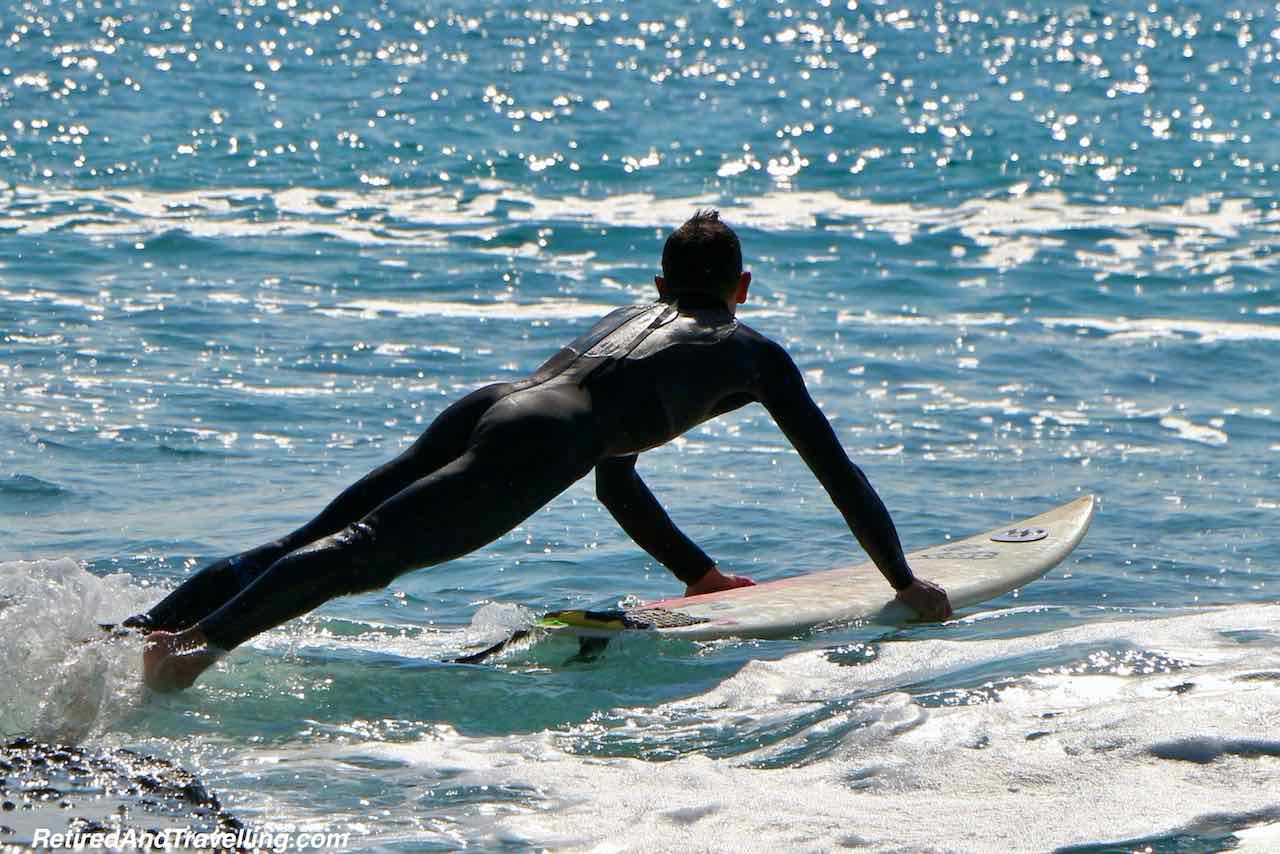 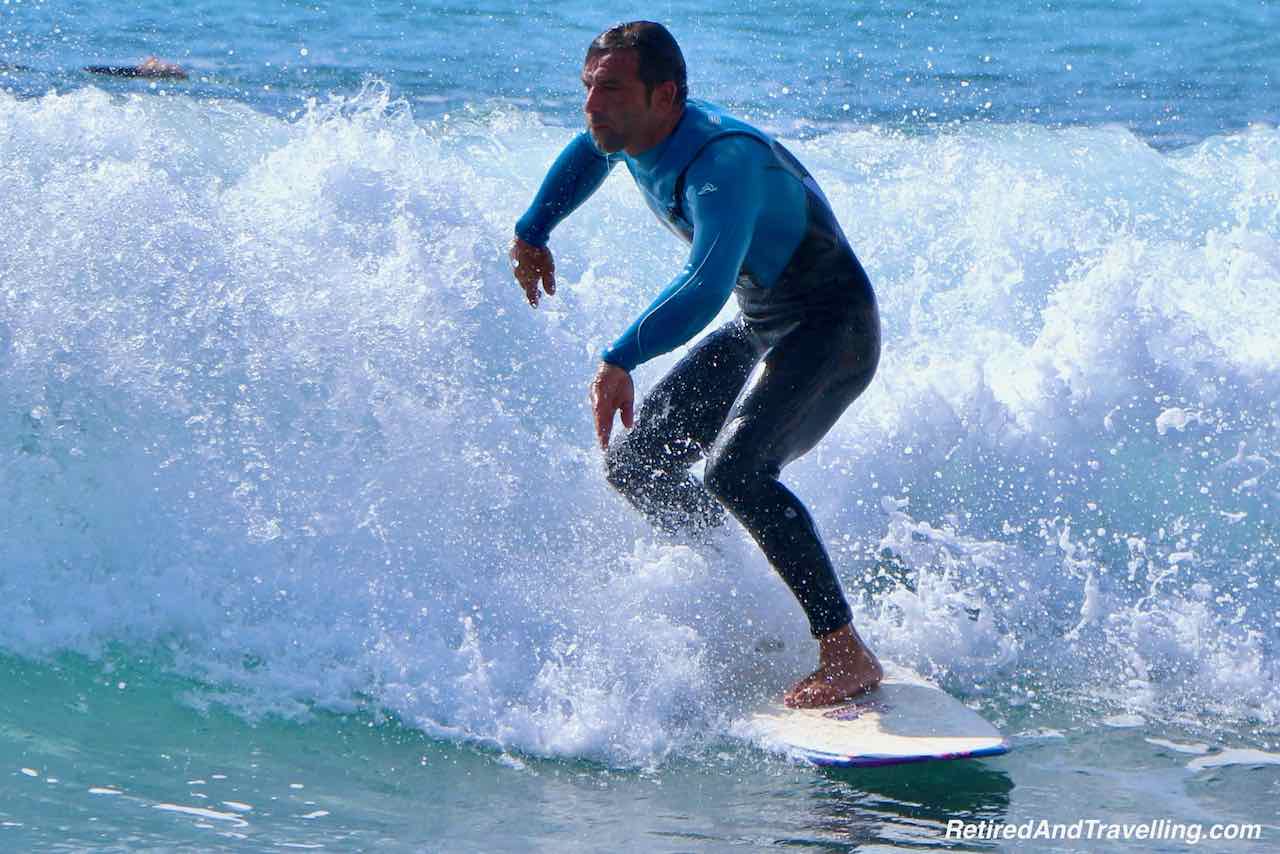 We found a spot to watch the water crash, amused by the delight of a young girl teasing the waves. 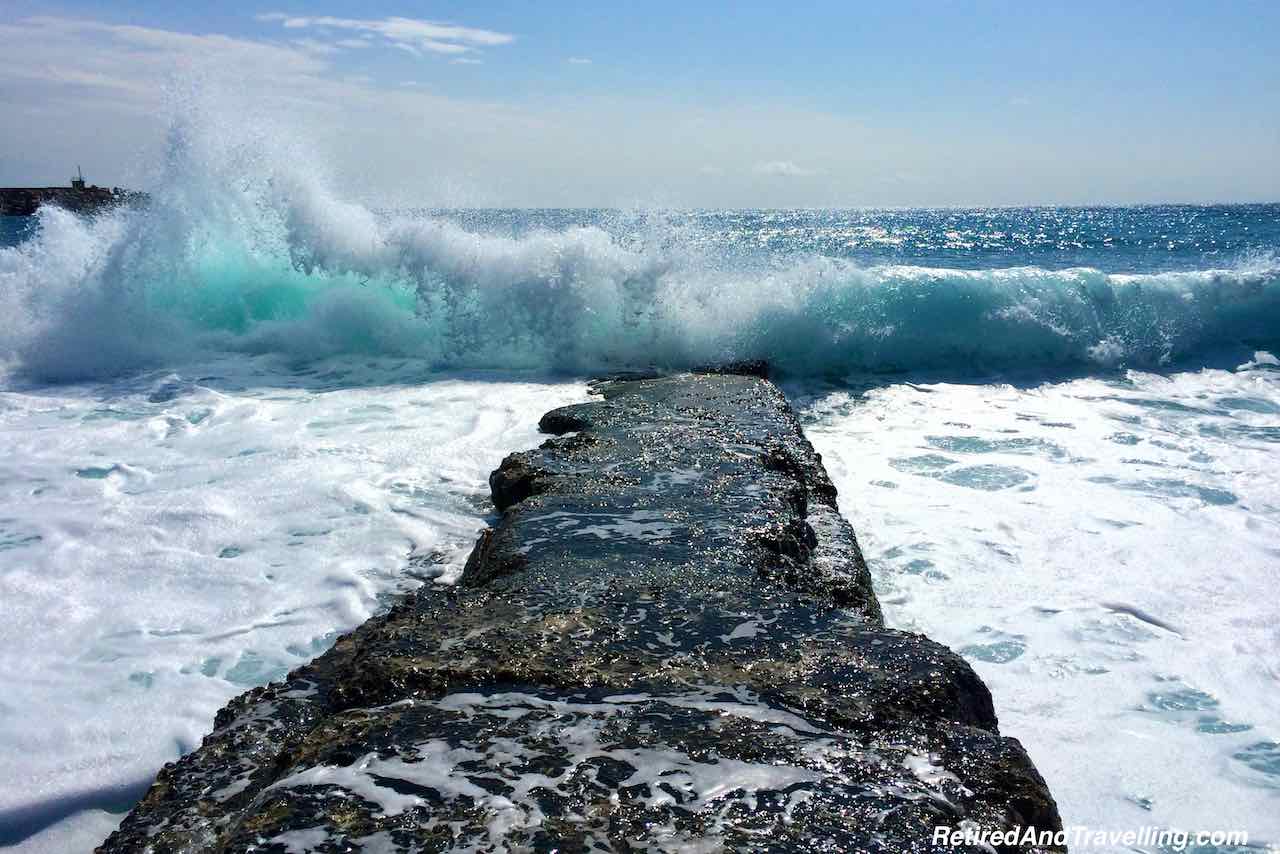 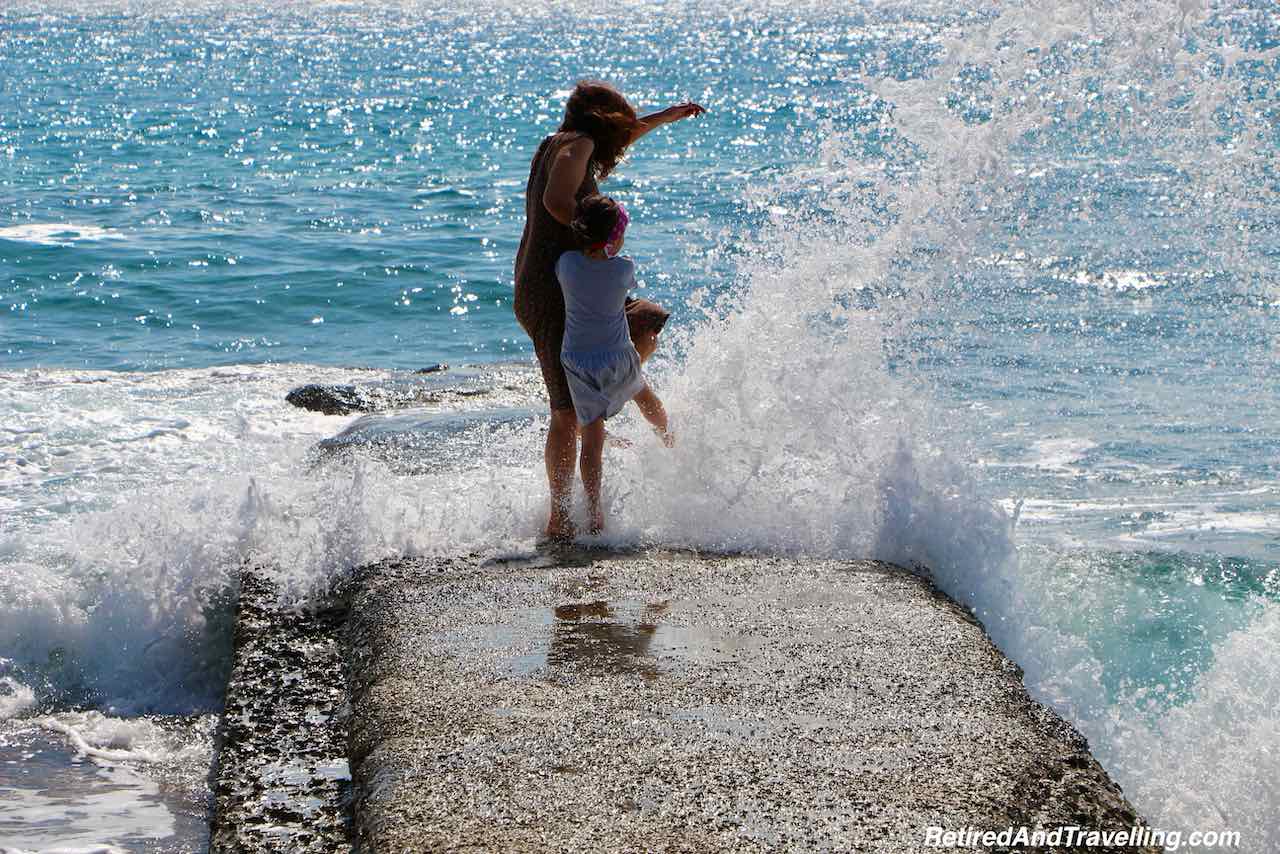 Feeling cocky I walked about out along the wall, even though I knew the waves were crashing over the wall. I posed for pics for David, continually inching further out. I ignored the wet shoes until a big wave hit and splashed right up my back. Luckily I could change into my swimsuit and spread the wet clothes over the car to dry. 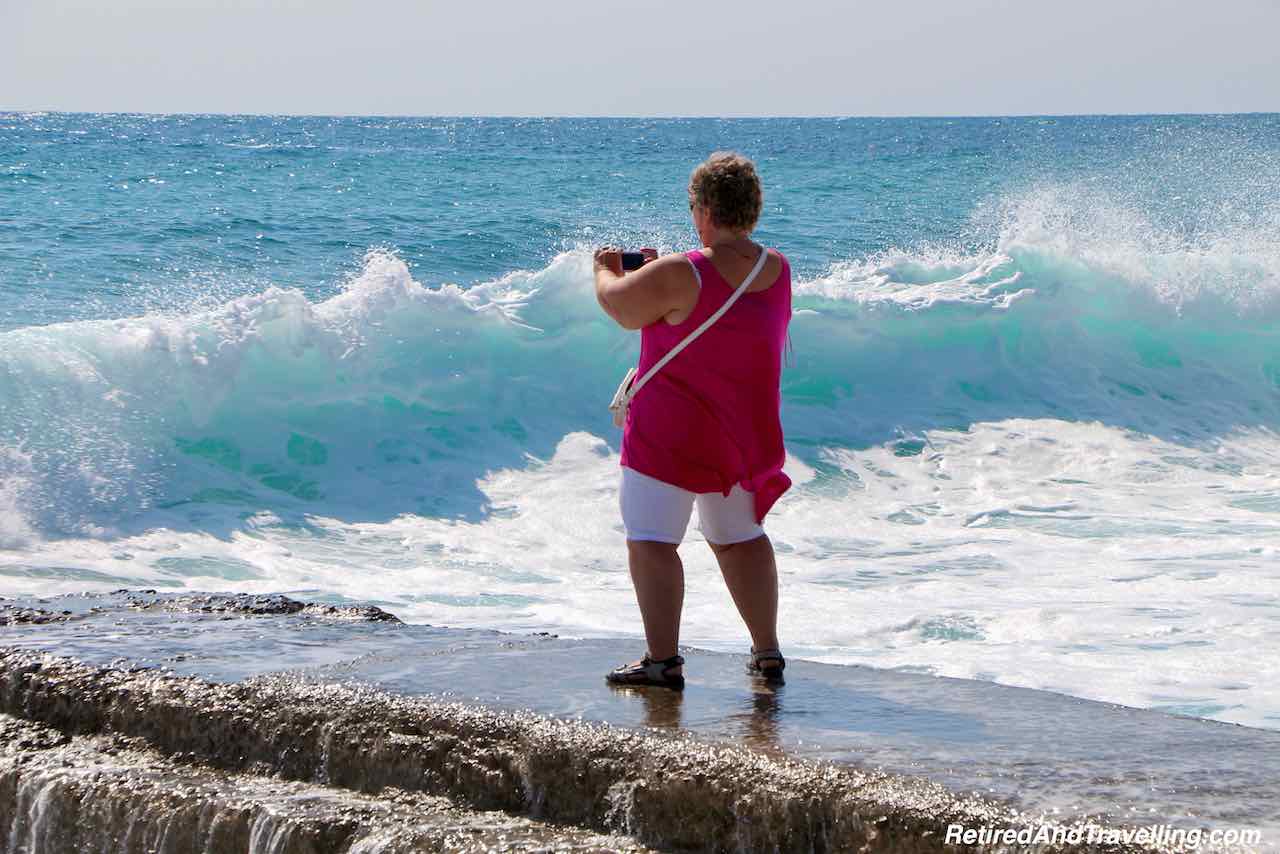 Exploring Along The Coast

While the main beach was in this furthest south town, the old fort was on the point just outside of town.  The map said this put us even further south. We walked along the rocky walkways out to the point. And saw Santa Maria di Leuca in the distance! 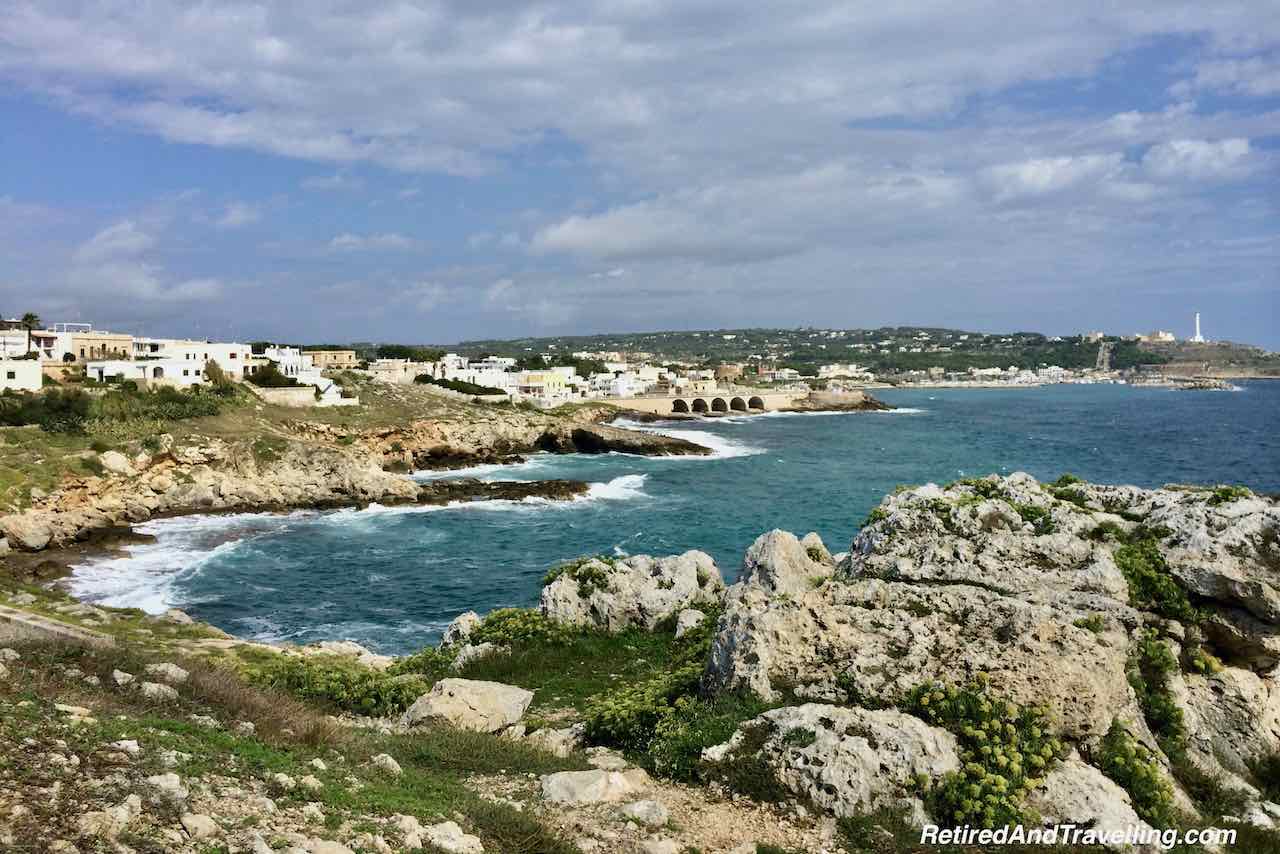 We looked down and saw two grottoes.  They were explored with tours when in season. All along the beach road we saw tour signs.  But all were closed up at this time. 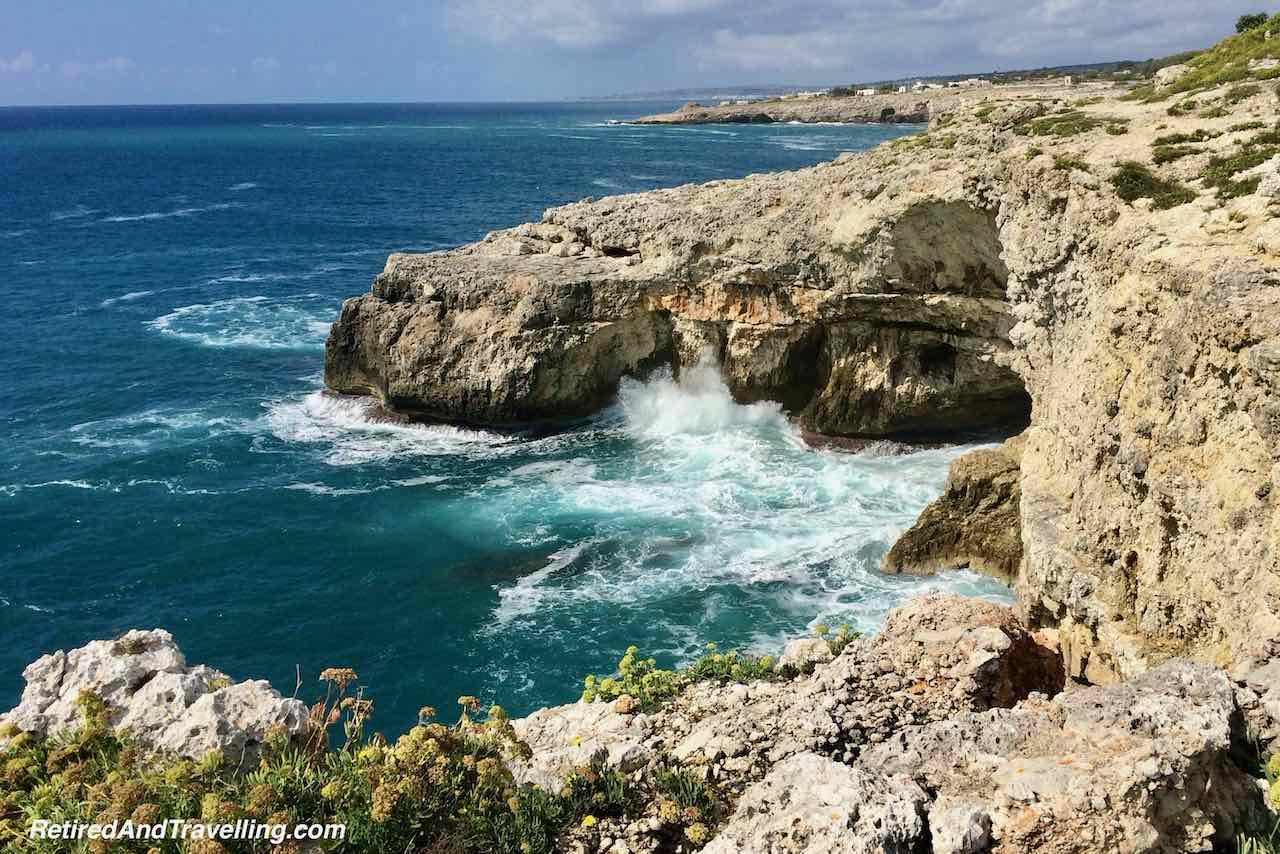 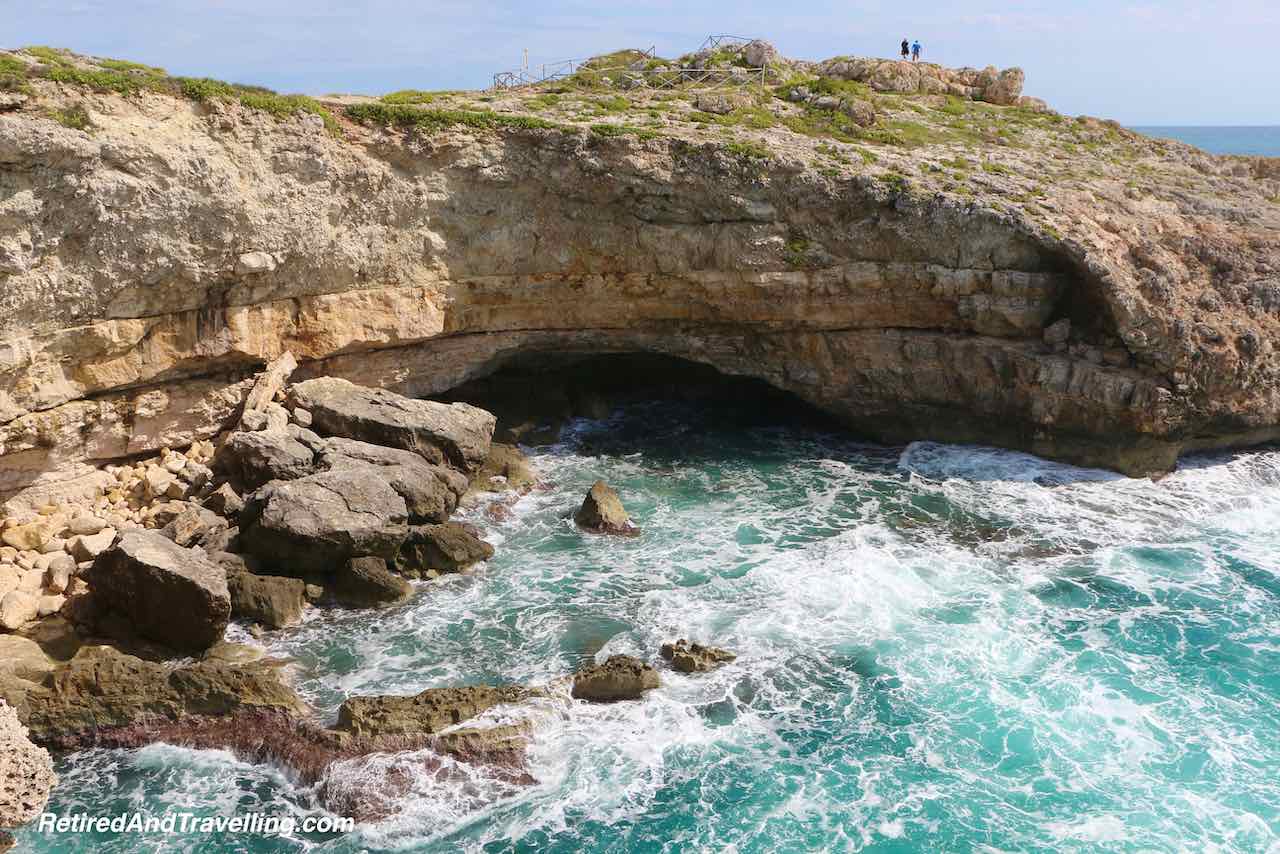 It was clear that at one point in time this point had been used for defence of the peninsula. We reached the furthest south point on mainland Italy.  This was at the “heel” where the Adriatic meets the Ionian Sea! 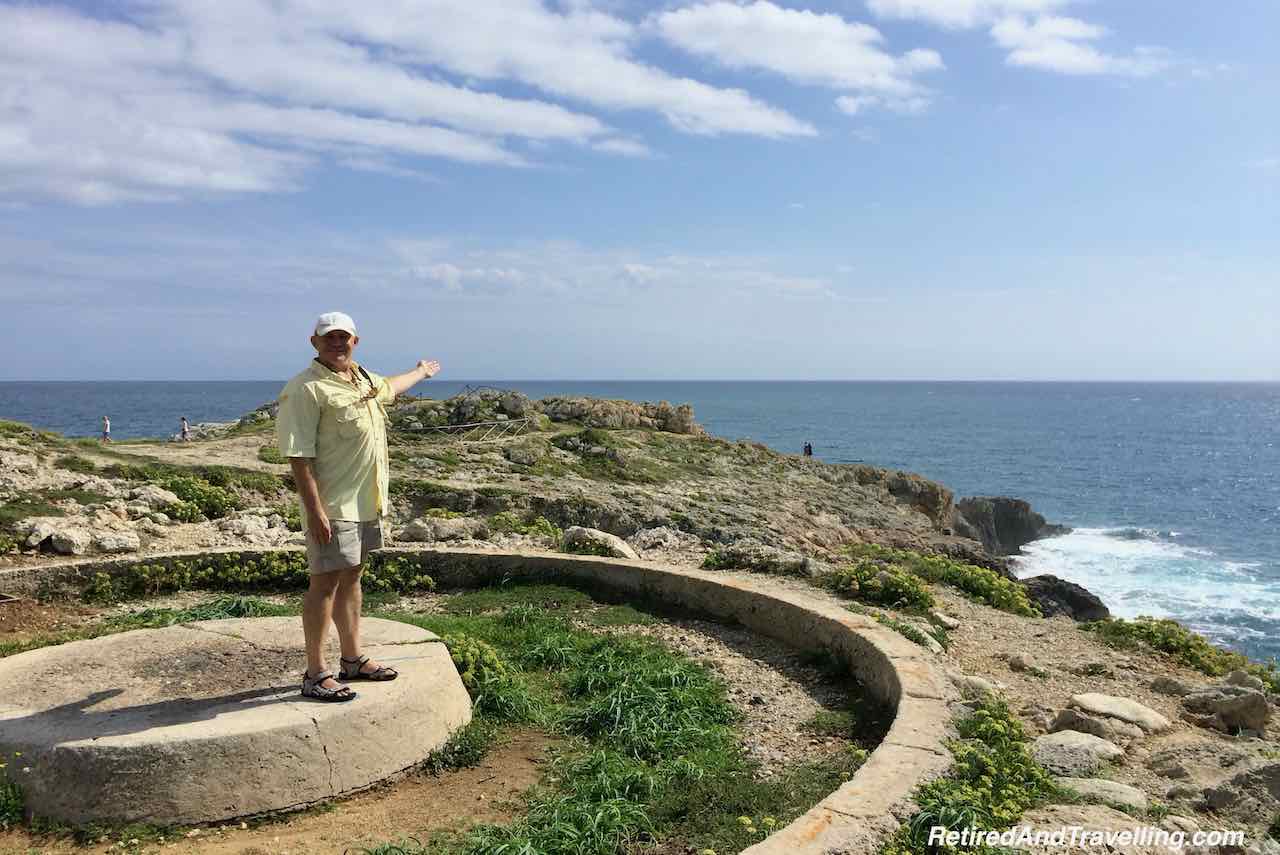 It was now after 1pm and we had not even stopped for coffee. We finally headed back to the restaurant we saw on our first pass by. It looked like the lunch crowd was finally all gone.  But the wait staff seemed reluctant to seat us on the patio. Once we were finally settled in we understood. First one and then a second tour bus group showed up. 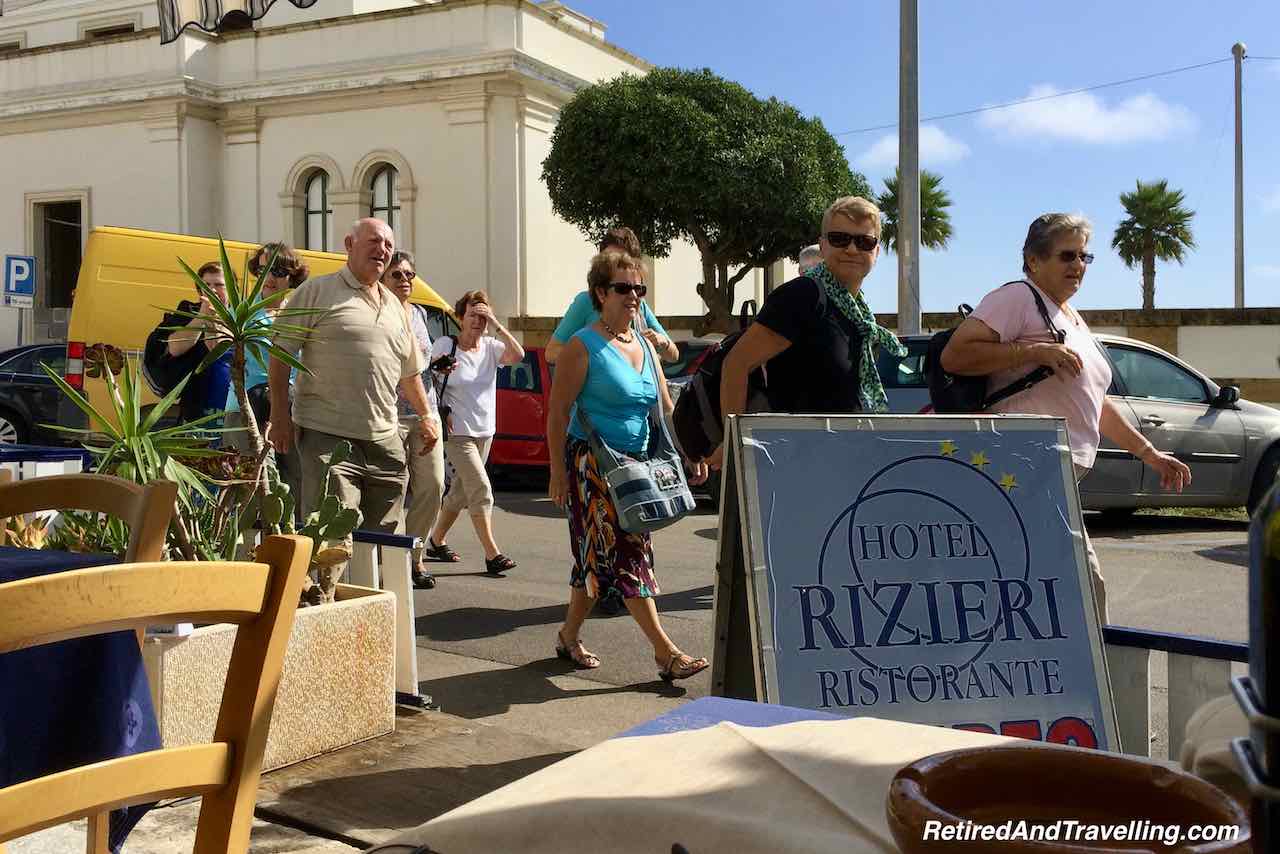 What a difference 15 minutes made! Despite the new crowds, the service was good.  And our seafood lunch was worth the loss of our quiet. 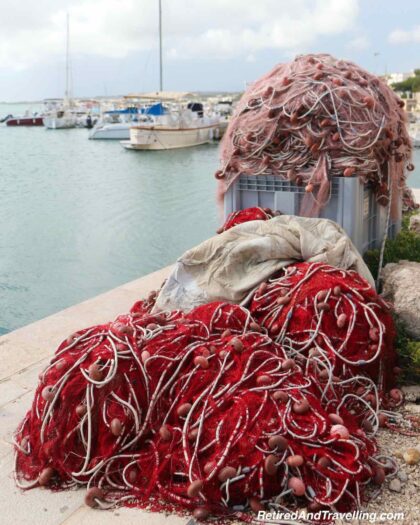 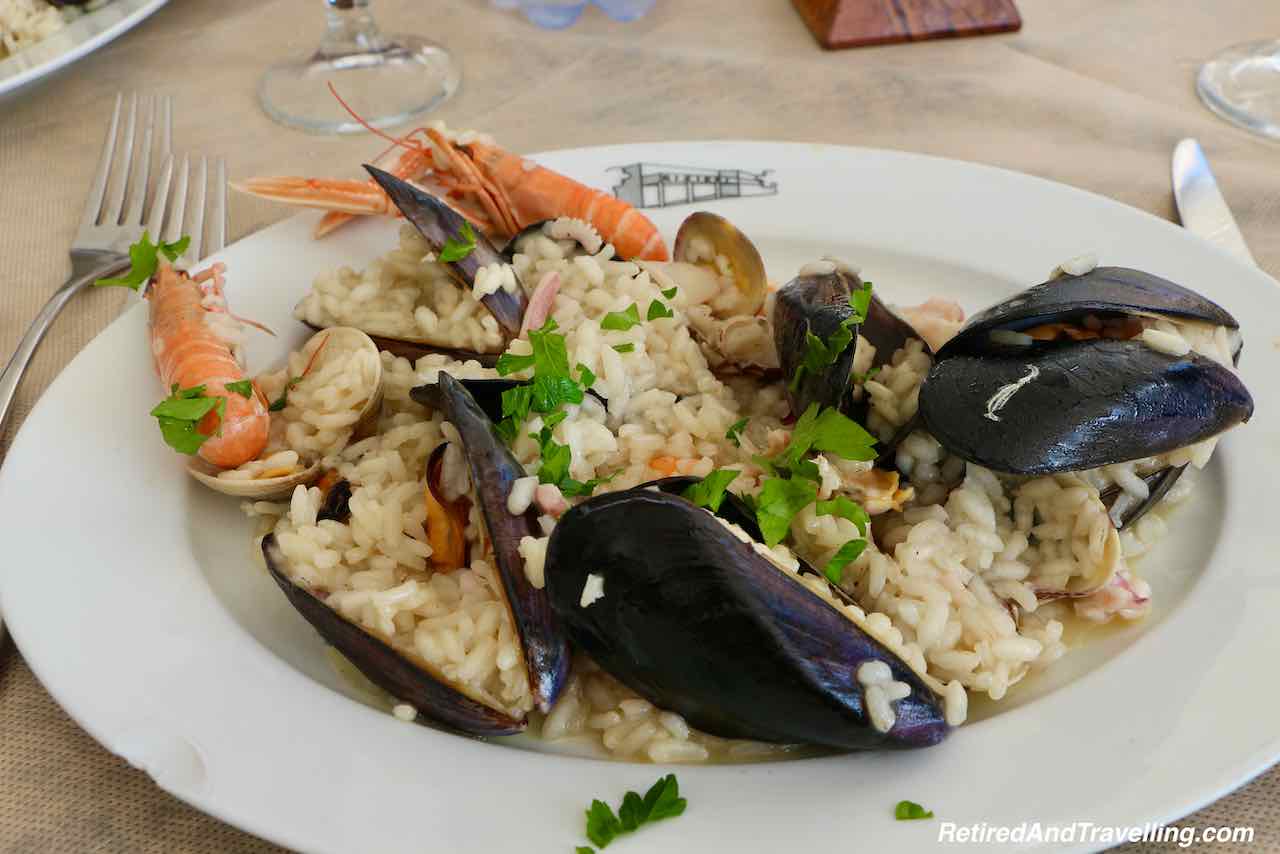 We really liked Santa Maria di Leuca and felt we might come back to stay. It was off season and a beach town.  But there was still enough open and had enough life in the town that we could spend a few days here as a base. While I might never take up surfing, I would still enjoy spending hours watching the surf roll in. With beaches and beach clubs nearby, we would find lots of spots to try for beach lounging. And we knew we would eat well with all the seafood we could manage.

The Beaches of Southern Puglia

Wandering up the coast road, we stopped regularly at the beaches along the way (Torre Vado, Pescoluse, Torre Pali, Lido Marini). We walked along the water’s edge and enjoyed the sun and the water but other than brief stops, we kept going. 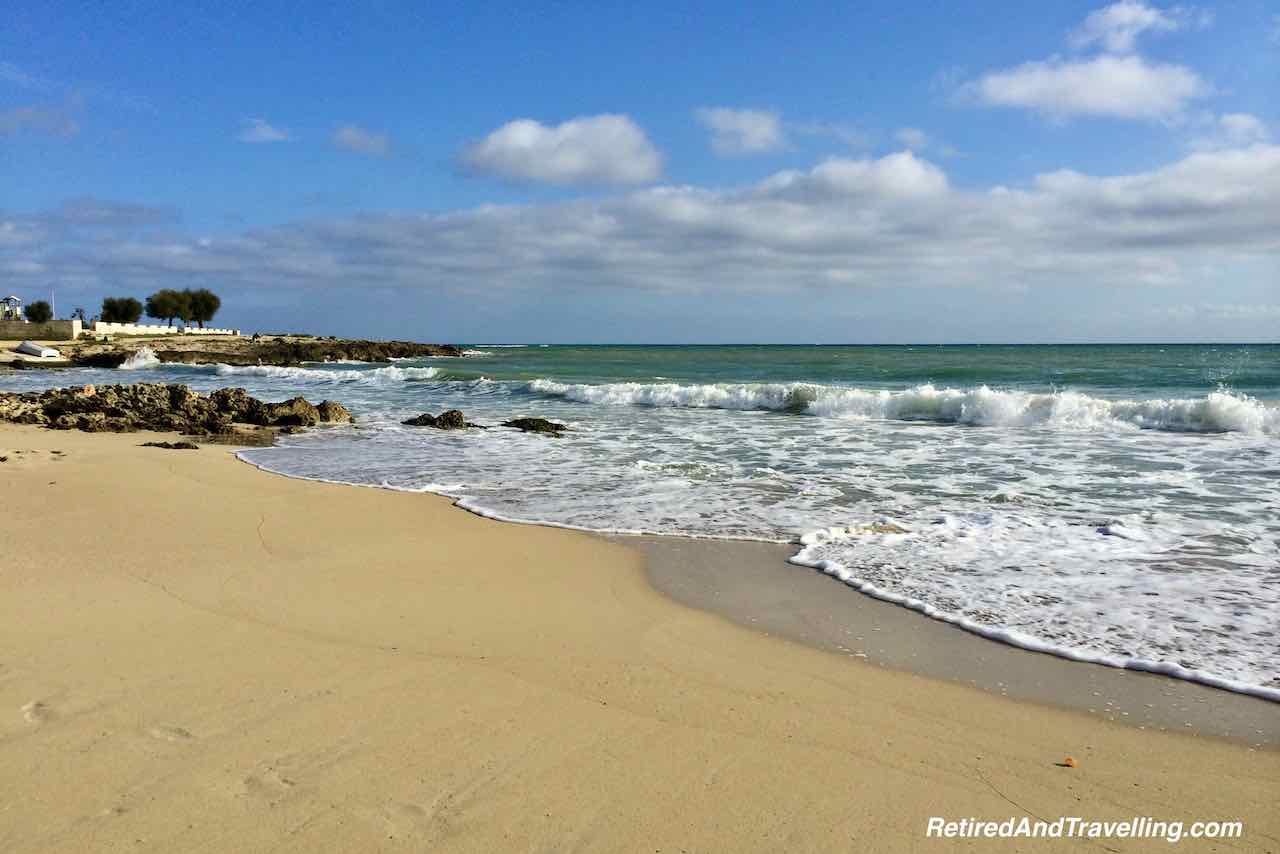 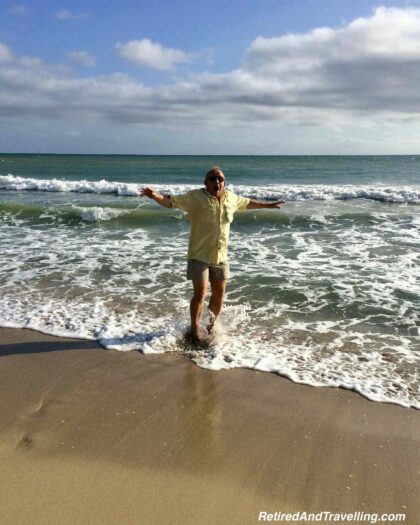 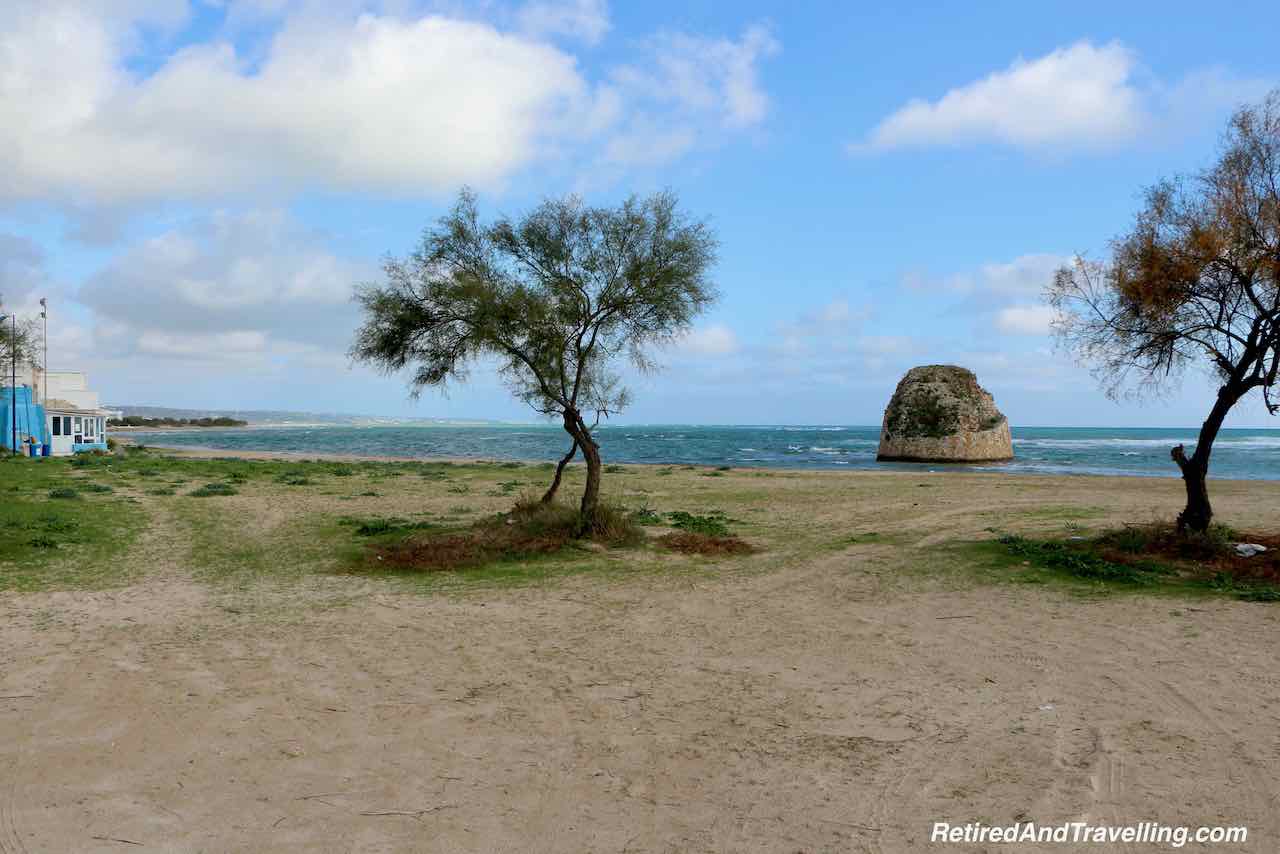 Our stop at Marini gelato taught David a lesson! We had been learning about gelato in our travels about Italy and the one thing we knew to shy away from was high mounds of gelato (as it usually meant mass produced gelato filled with air to make it fluff). Entering Marini, David took a cursory look at the gelato freezer and wanted to pass. But a closer look showed the the mounds of gelato just reflected the way the home made gelato had been put into the stainless steel containers. We were both glad we had not passed on gelato (even though the pastry counter was also drool-worthy)! 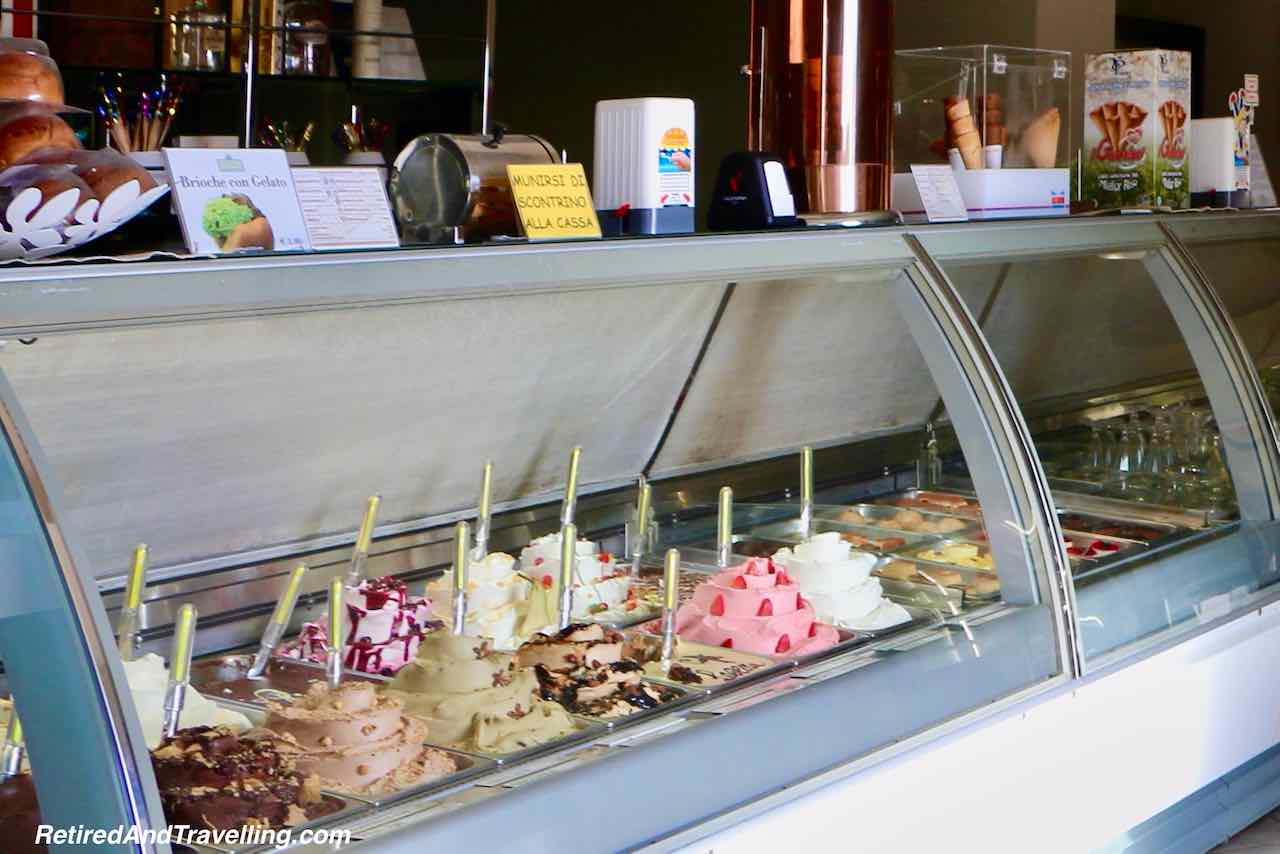 Heading To Sunset in Galipoli

The coast road was great but it was slow. As we passed 4pm we figured we better head towards Gallipoli if we wanted to make sure we arrived well ahead of sunset.

The only stops we made were to take pics of the olive trees. At our cooking class the previous day, we had talked about the olive trees and the huge olive oil business in the south. The old gnarled olive trees were original tress, cut down when they no longer were producing and replaced with more regimented straight rows of olive trees. 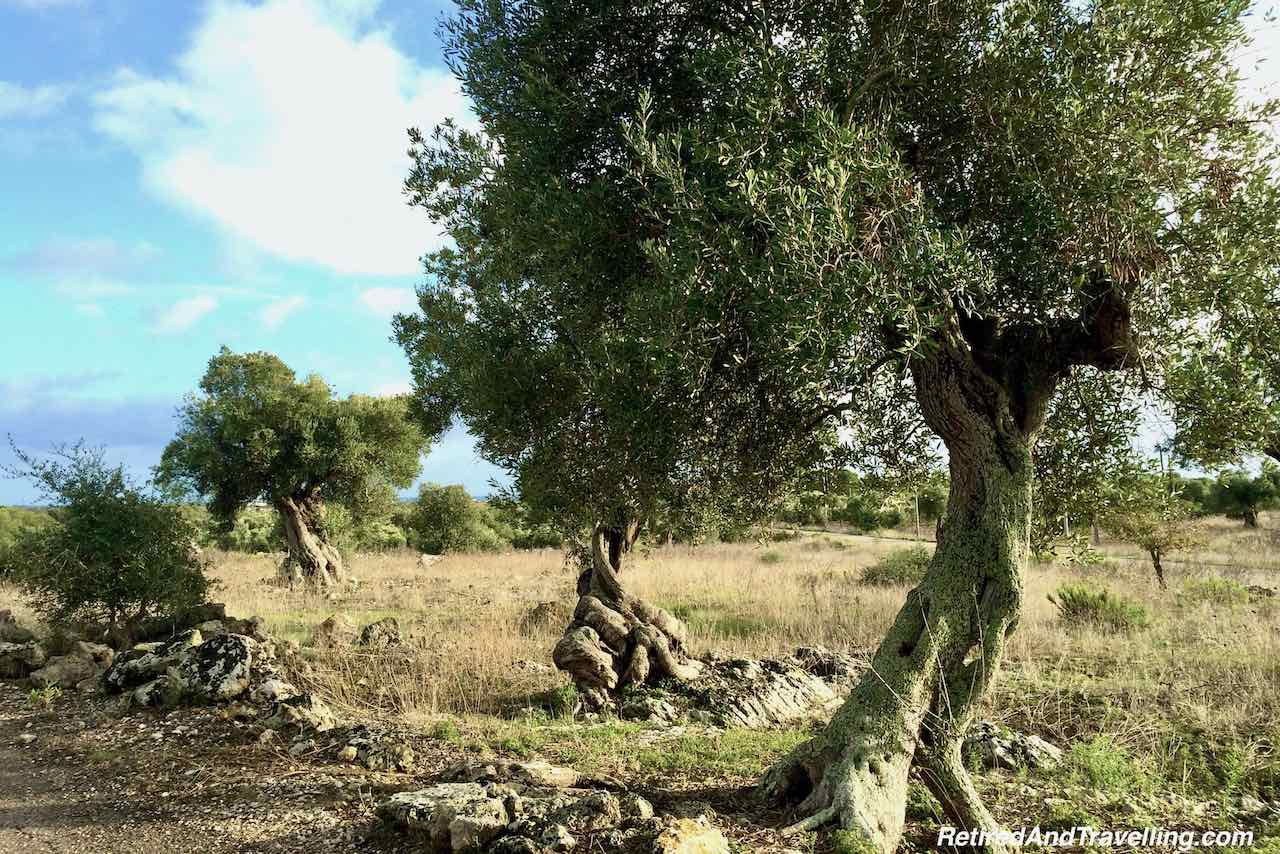 As we approached Gallipoli, the clouds rolled in.  Parking in the port, we climbed the ramparts and were able to see the rain line moving in on the horizon.  We got our pics and ran for the car, making it just in time. Sitting in the car, we let the worst of the storm pass. 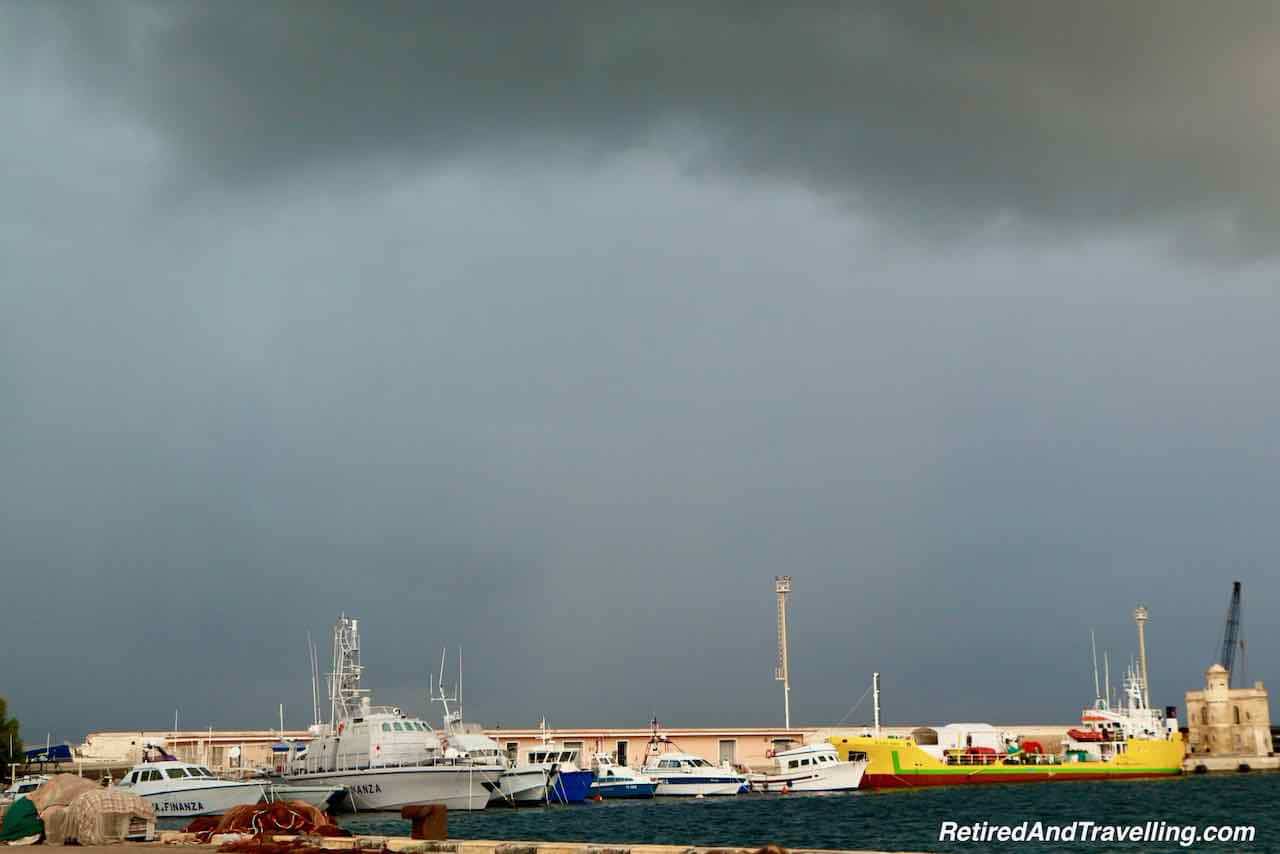 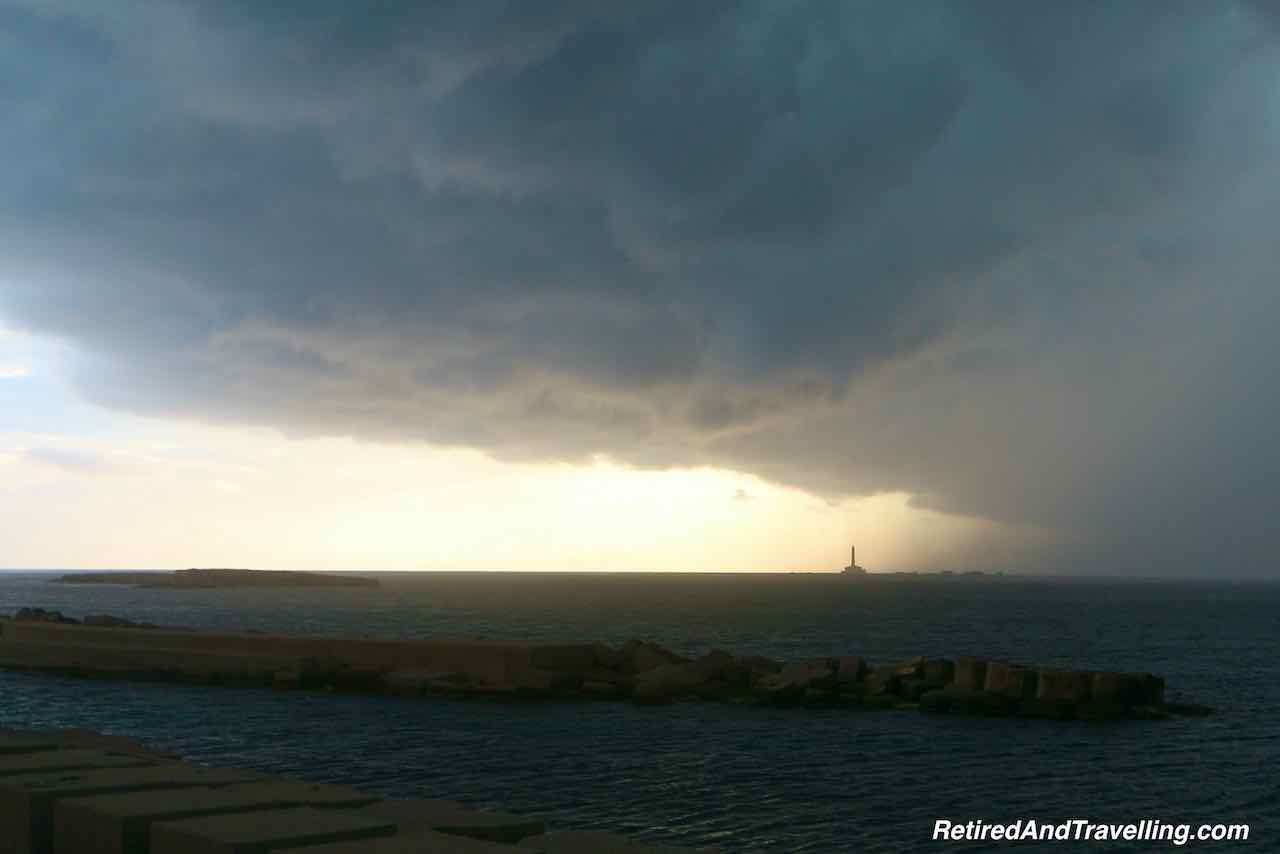 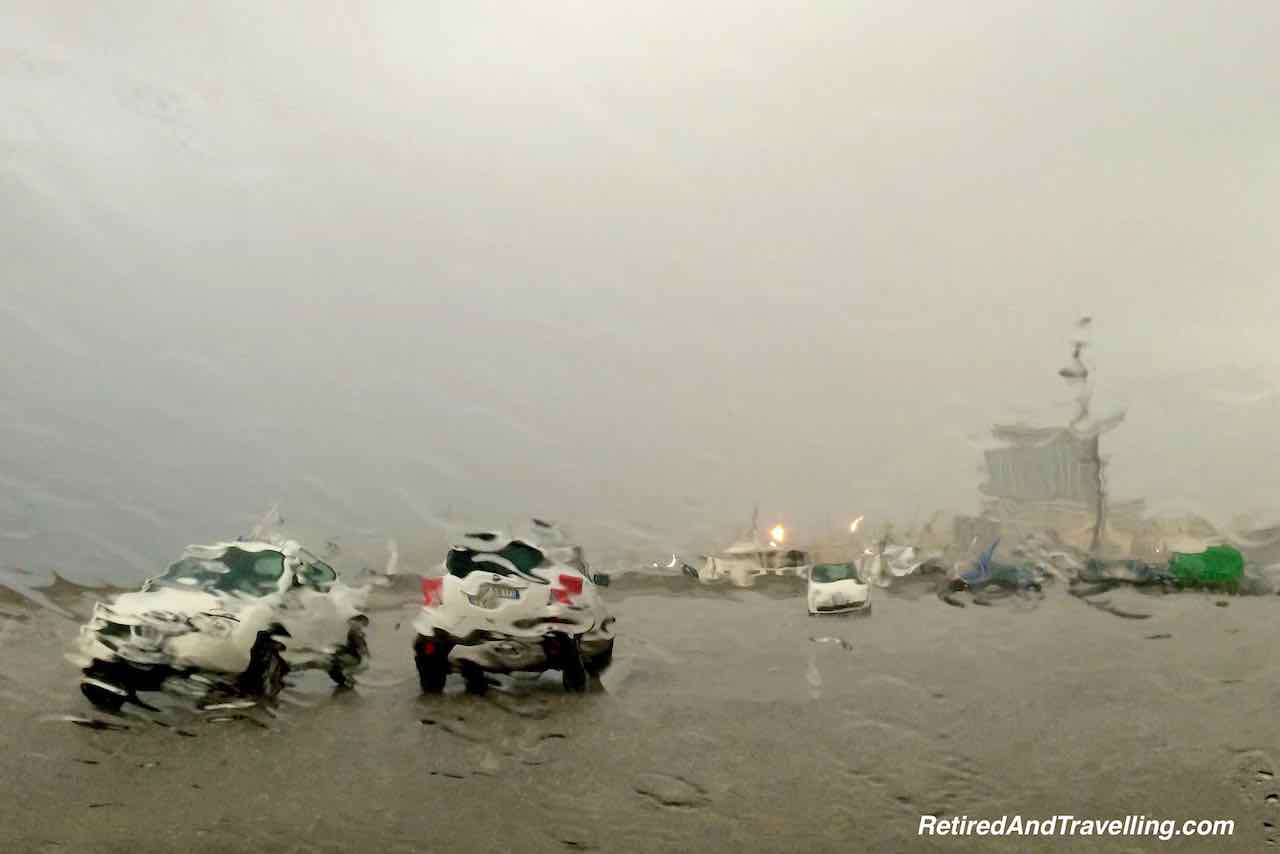 When we saw the distant horizon lighten again, we climbed back up on the ramparts. While we could see lightening in the distance, the rain was past us for now. Unfortunately the sunset was behind the clouds and we caught only a glimpse. 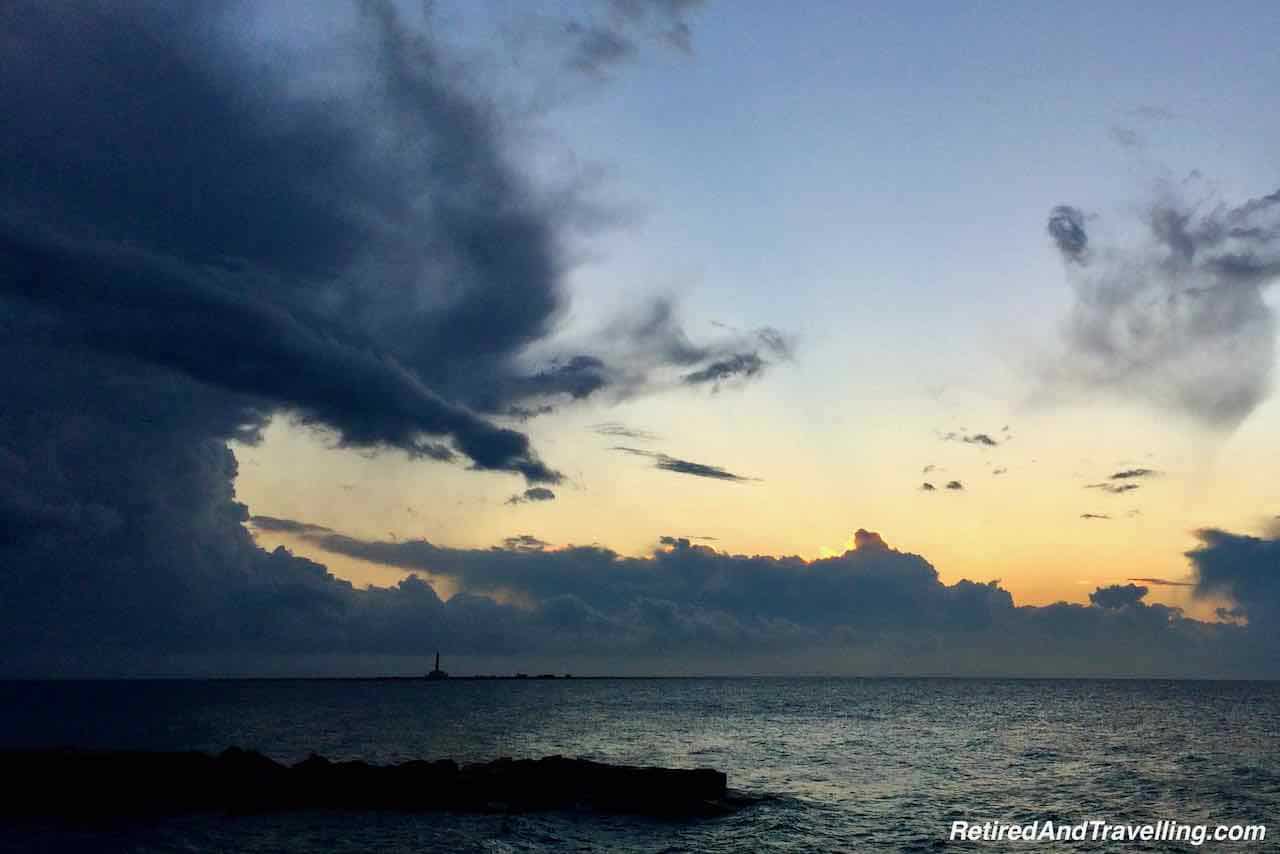 A Great Day Trip Where The Adriatic Meets The Ionian Sea

With a dark and wet town, we decided that we would have to return to try to see the town on another day. Racing the storm back to Lecce, the rain drops didn’t hit the hotel room window until after we were settled in with our takeout pizza and rose wine picnic.

Did you get to  where the Adriatic meets the Ionian Sea?  What is your favourite beach in Puglia?  Did you try surfing?  Did you catch the sunset at Gallipoli? 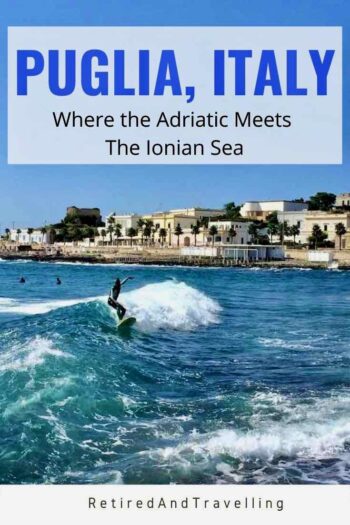 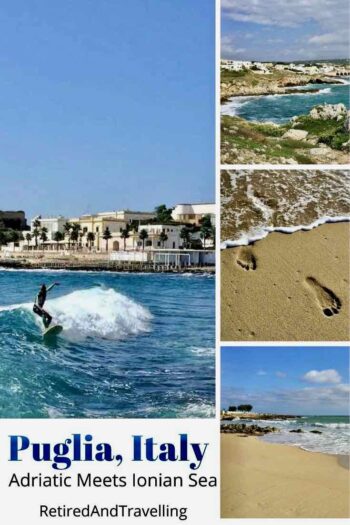 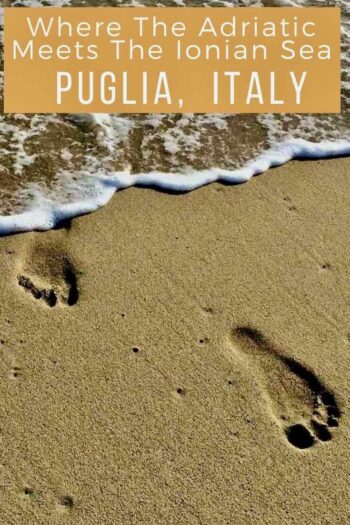