Learning about food in Italy was a favourite part of travelling in Italy! We enjoyed a day of Southern Italy cooking lessons with Silvestro at The Awaiting Table on our in stay in Lecce.

We did not want to drink and drive.  So we called a cab from the hotel and paid the fixed price of 13€ for a 3 minute ride into the old town.  Later in the day we walked.  At that point we needed some exercise after our amazing food discovery day!

We Started In The Market

Silvestro met us in the main square in Lecce. We started with the obligatory stop at the bar for a caffe italiano with Antonio.  The next stop was the oldest market in Lecce.

The market had multiple independent stalls under one roof.  It allowed us to get all the fresh ingredients we needed to cook local this day for both lunch and dinner. We wandered from stall to stall.  It was clear that Silvestro was a frequent customer, his students trailing with cameras in hand. 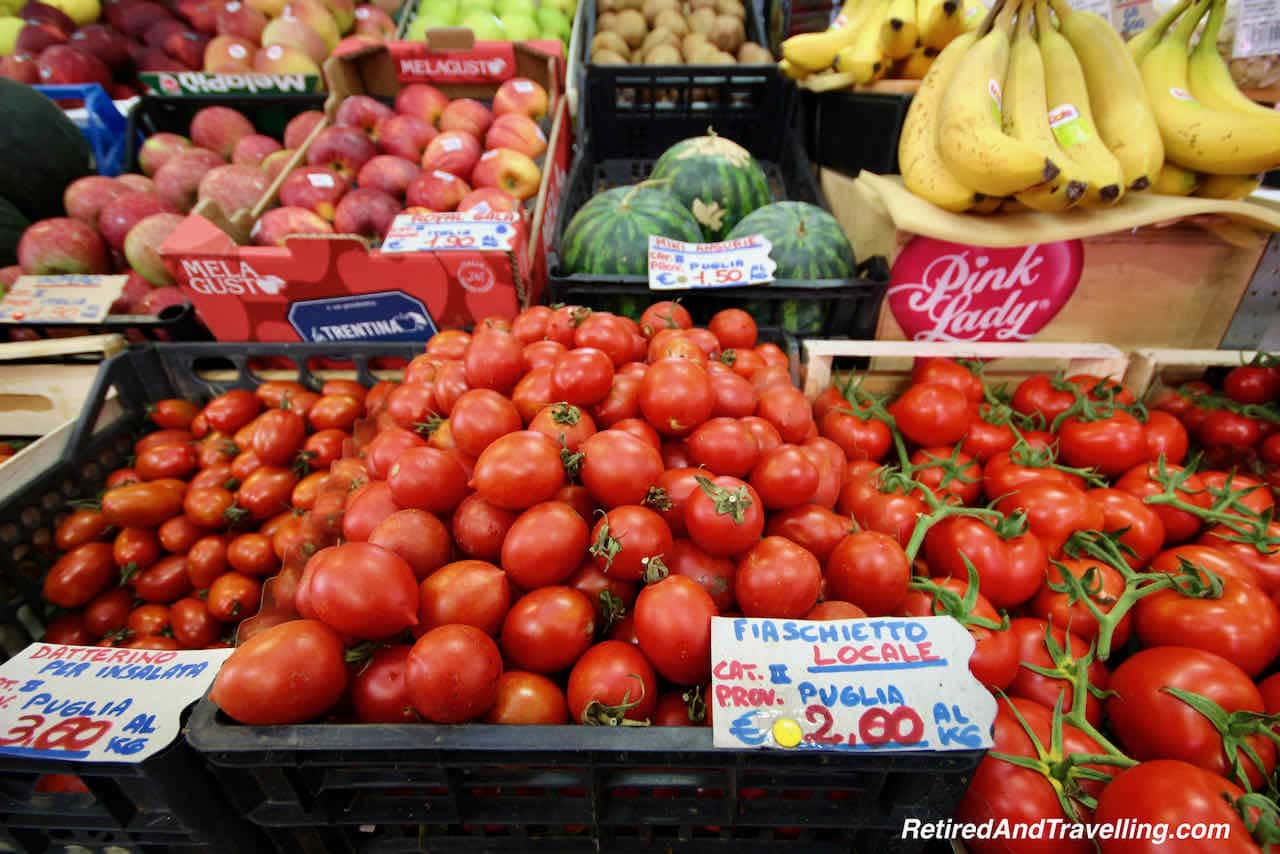 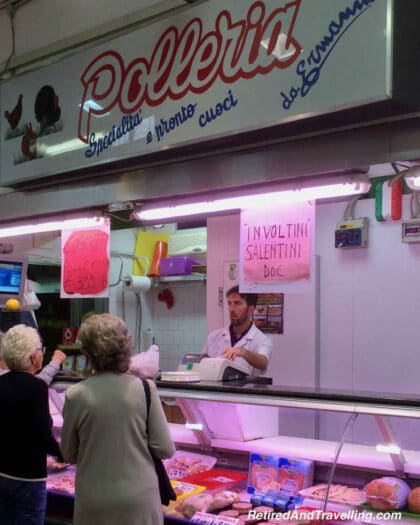 Wandering back through Lecce we arrived at the house and settled into the kitchen with our colourful aprons. 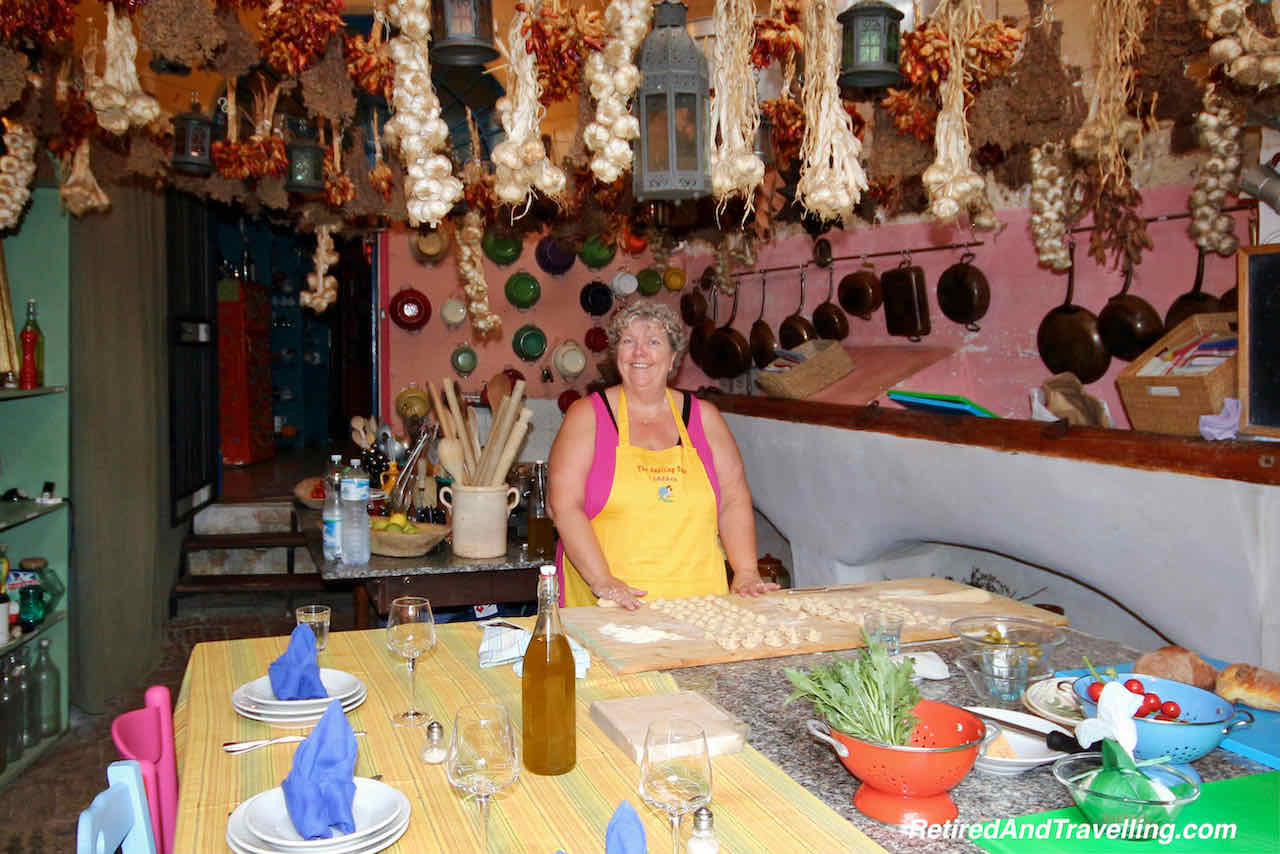 The first lesson was about making home made pasta. Unlike pasta from the north of Italy, pasta in this Southern region was made without egg.  It was just water and flour.  The flour was mixed with a blend of barley and semolina flour.  It was then poured on the wooden board and hollowed out like a volcano.  We then put water in the inside. 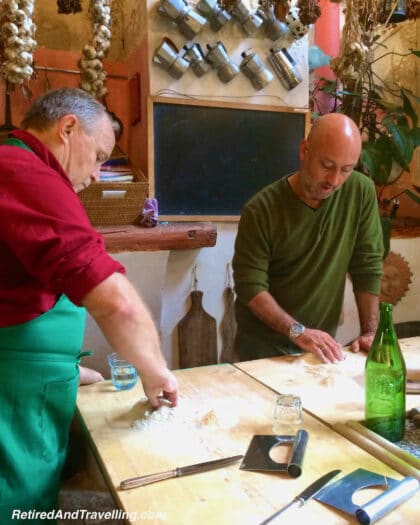 We then continued to knead the dough and added fresh dry flour if the dough was still too wet. Pieces of the dough were regularly shared between us to ensure we all worked to the same end consistency.  It was easier to create pasta dough with two simple ingredients than we thought possible.

Pasta was then set aside to dry a bit. We found out later that the pasta for our dinner was better with just a little bit more drying.

We created two types of pasta:

We used a glass to cut a circle of pasta.  Then the circle was cut in half and a cone was made from the half a circle of pasta. The cone of pasta was then put over a bottle top.  We hit the pasta with our hand and made it go down over the edge.  This made the hat brim. 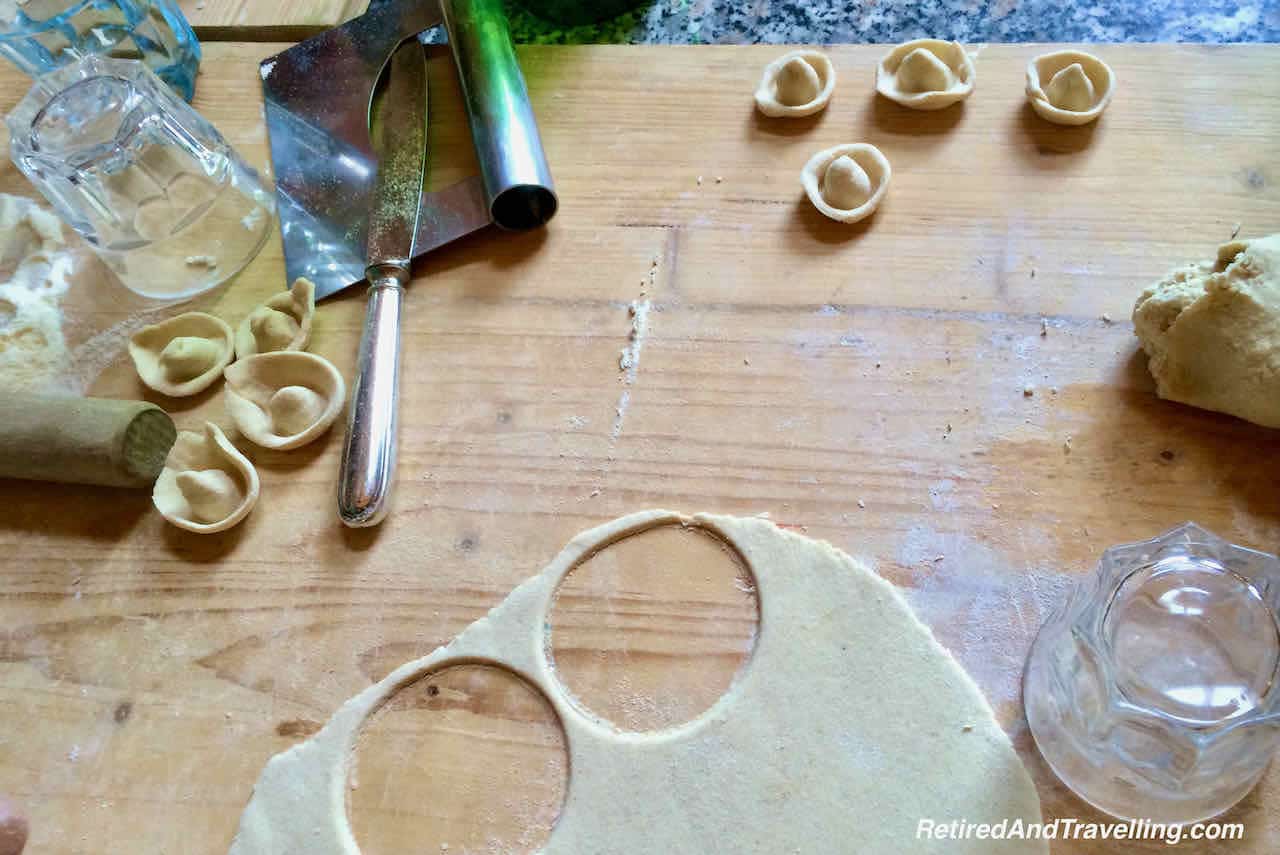 We rolled a tube of pasta about a finger width. Then we cut off a small slice and rolled with a knife to create a cup. Then the cup was turned inside out.  We aimed for a slight scalloped look with a narrow edge. 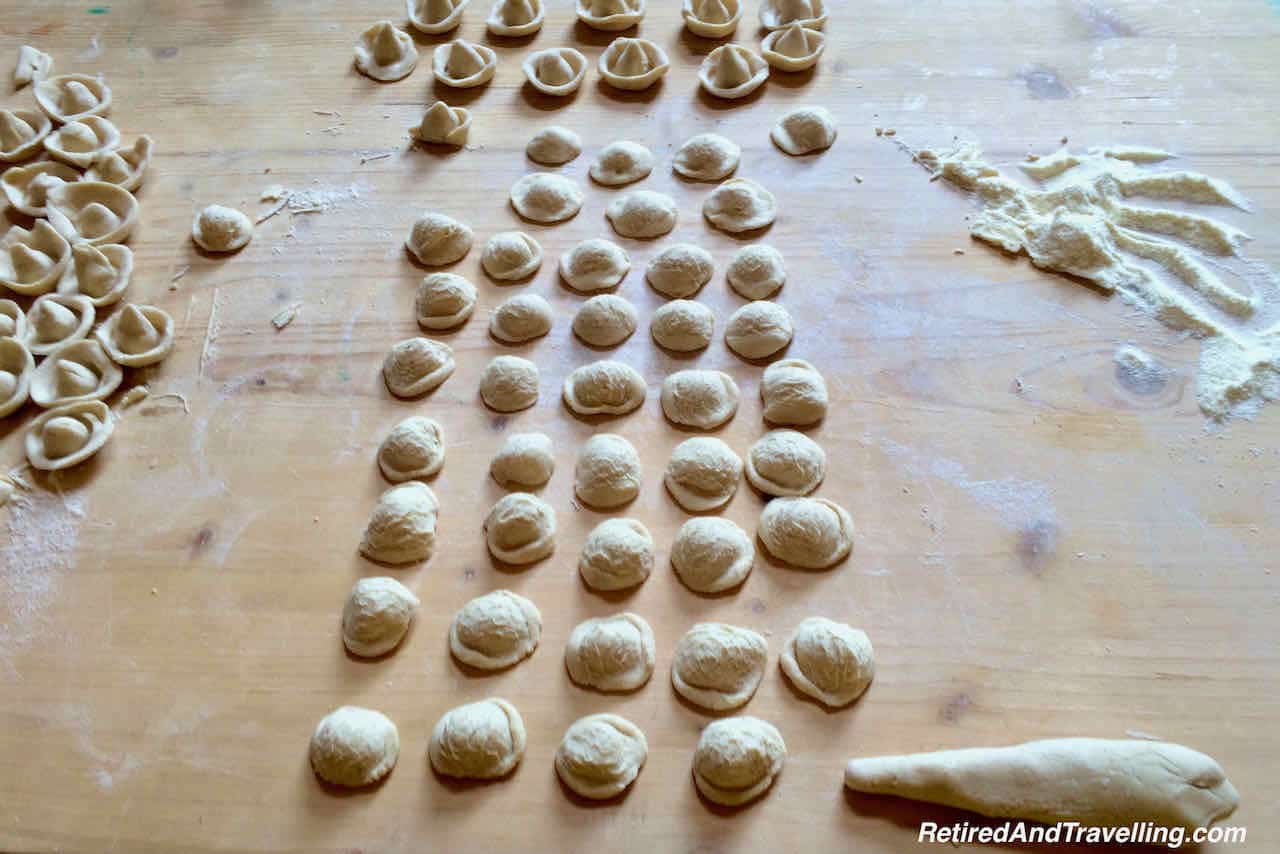 Throughout the morning, we chopped and diced vegetables for the pasta sauce and for sautéing the rabbit for lunch. We  had the Mexican hat pasta for lunch. 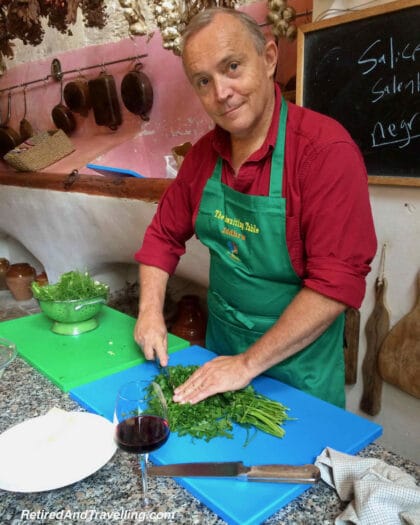 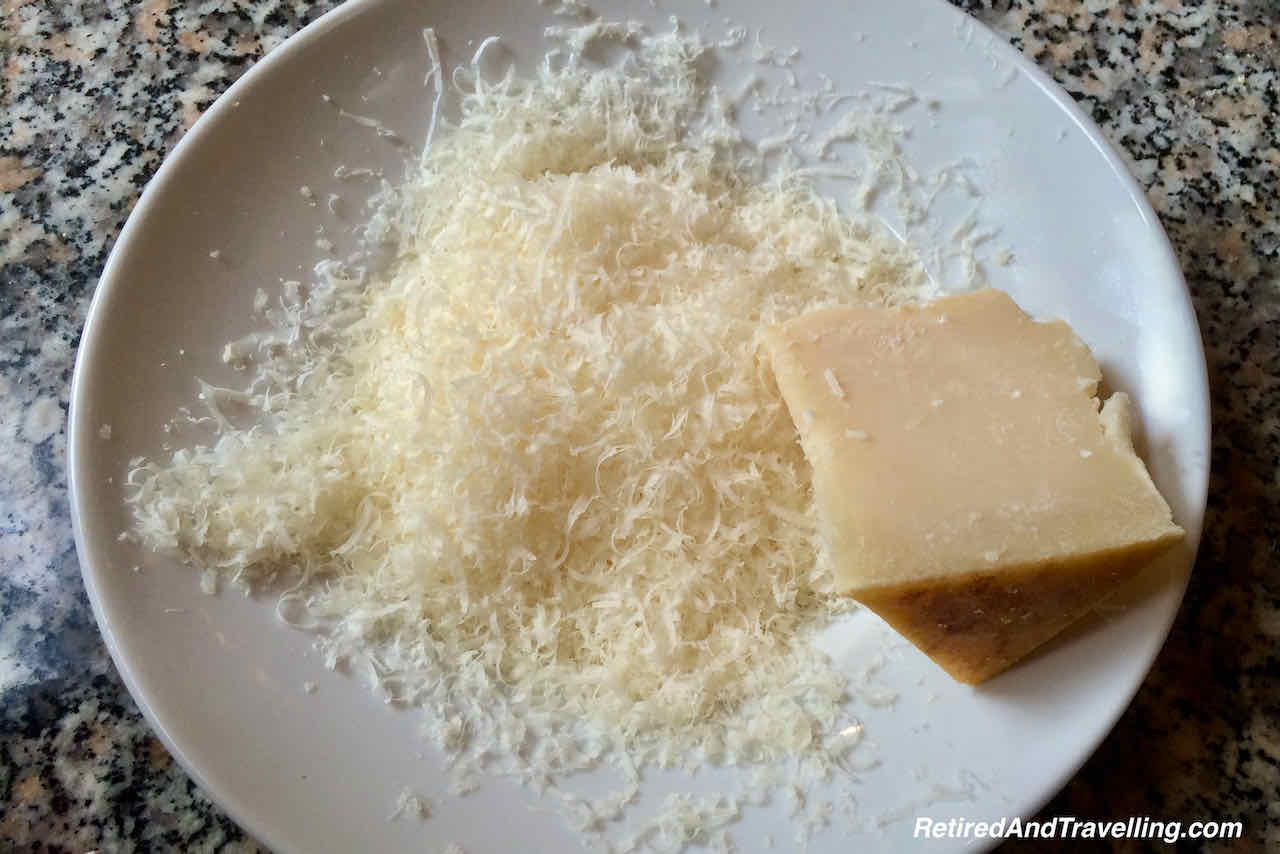 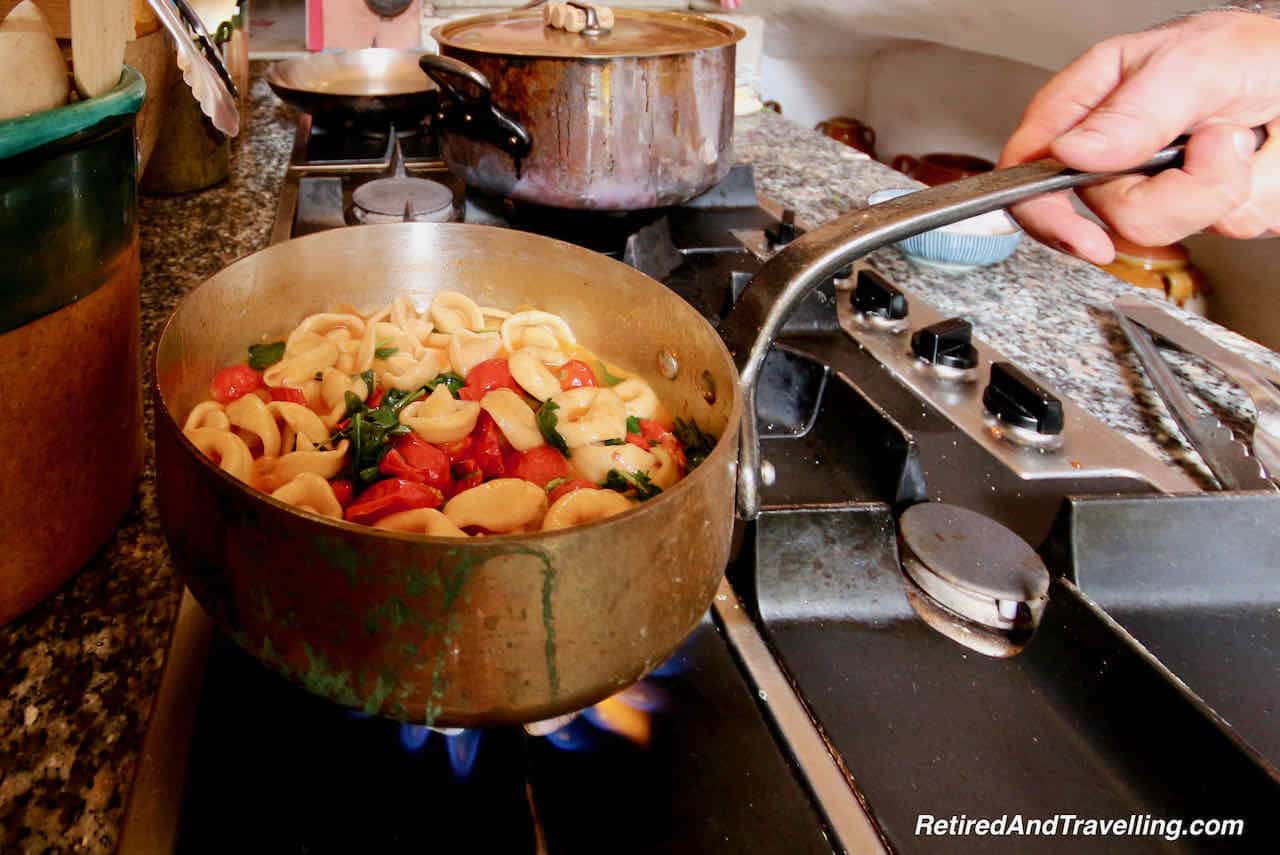 Dessert was simple candied almonds. White sugar was stirred and melted until it reached a light colour.  No butter was used.  It was kept on the heat until it thinned. Then we poured it over a plate of raw almonds and smoothed it down with a half a lemon before it was let to stand and harden. 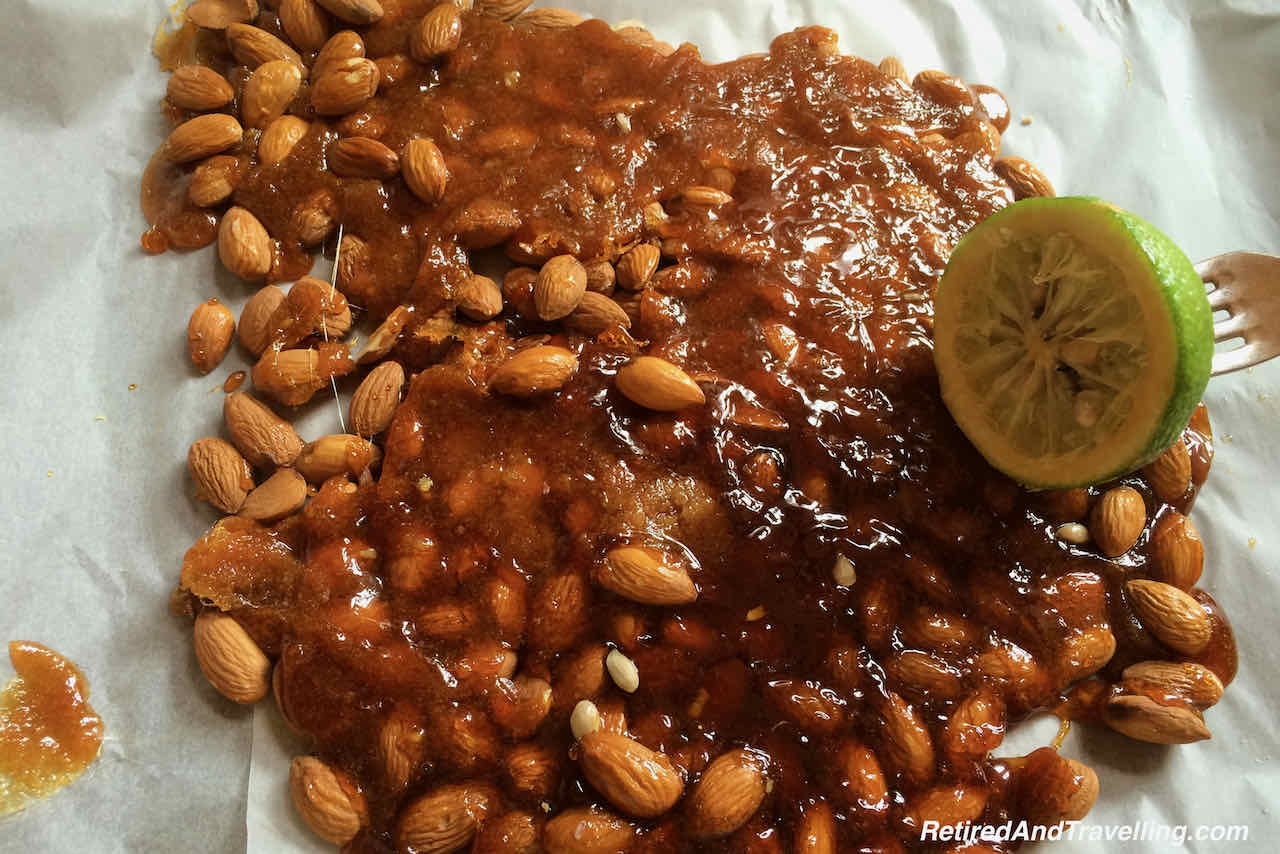 When it was hard, we broke into smaller pieces. It was interesting to taste.  There was an absolute taste of lemon on top of the sugar sweetness. Unfortunately the sticky, hard candy broke a piece of David’s tooth off!

We had lunch with a local red wine Salice Salentino made from Negromare grapes. After our discussion on local wines, we were not surprised by the herby smell or it being a bit on the bitter side.

Over lunch, we continued to probe for more information on cooking and wines and the customs that varied from region to region. Silvestro had probably heard most of the questions that we asked before.  But he did not constrain our curiosity. 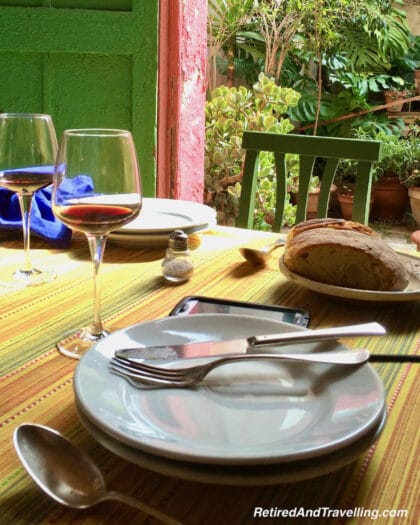 Sitting in the kitchen, with the garden doors open, we all squeezed around the kitchen table for lunch.  We ate course after course in true Italian fashion – pasta, then rabbit, finished with dessert. 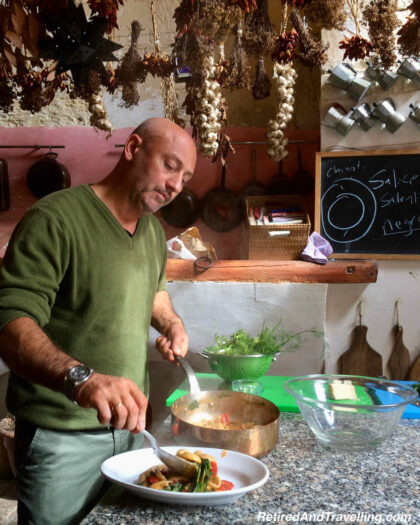 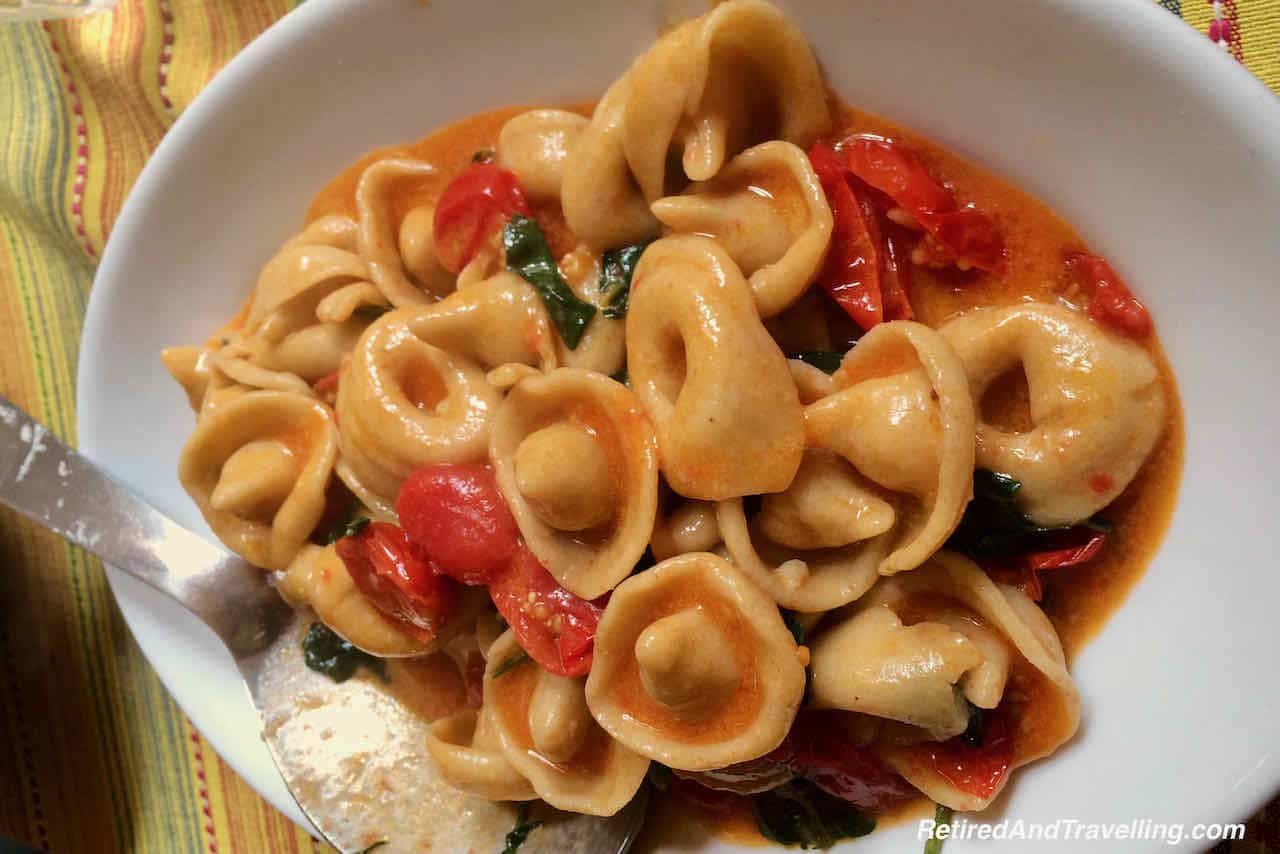 Finally sated, we sat back from the table. We had a 3 hour break before we returned to cook dinner. Silvestro suggested we meet and explore a wine market when we returned to further our education. We were game for that

On our way back out to the hotel for our break, we came across the roving judges who were considering Lecce for the cultural city for 2019. They hopped off the little tourist train at the opera and went in. It would have been a great boost for Lecce to be selected. Although later we saw a group of protesters, closely watched by the police, who didn’t agree! We learned later in our trip that Lecce had lost out this time to Matera!

Returning into the town centre after our break, we got a good overview at the wine store of the good red and rosé wines from the Puglia area.  It was interesting to learn that white wine represented only about 5% of the wine produced in this the area. That was not be true when we hit Sorrento for our next stop.

Silvestro also gave us some suggestions for Sicilian wine, something dear to his heart at that time.  He was in the midst of planning for a wine course he was giving in Sicily. Of particular note were wines from the Mt. Etna area.

Back at the school, we sous chefs chopped vegetables and cored and peeled pears for desert. David sautéd the onions and pancetta for the tomato sauce for the pasta while the chicken was browned. The fresh in-season mushrooms were grilled as the chicken side dish. 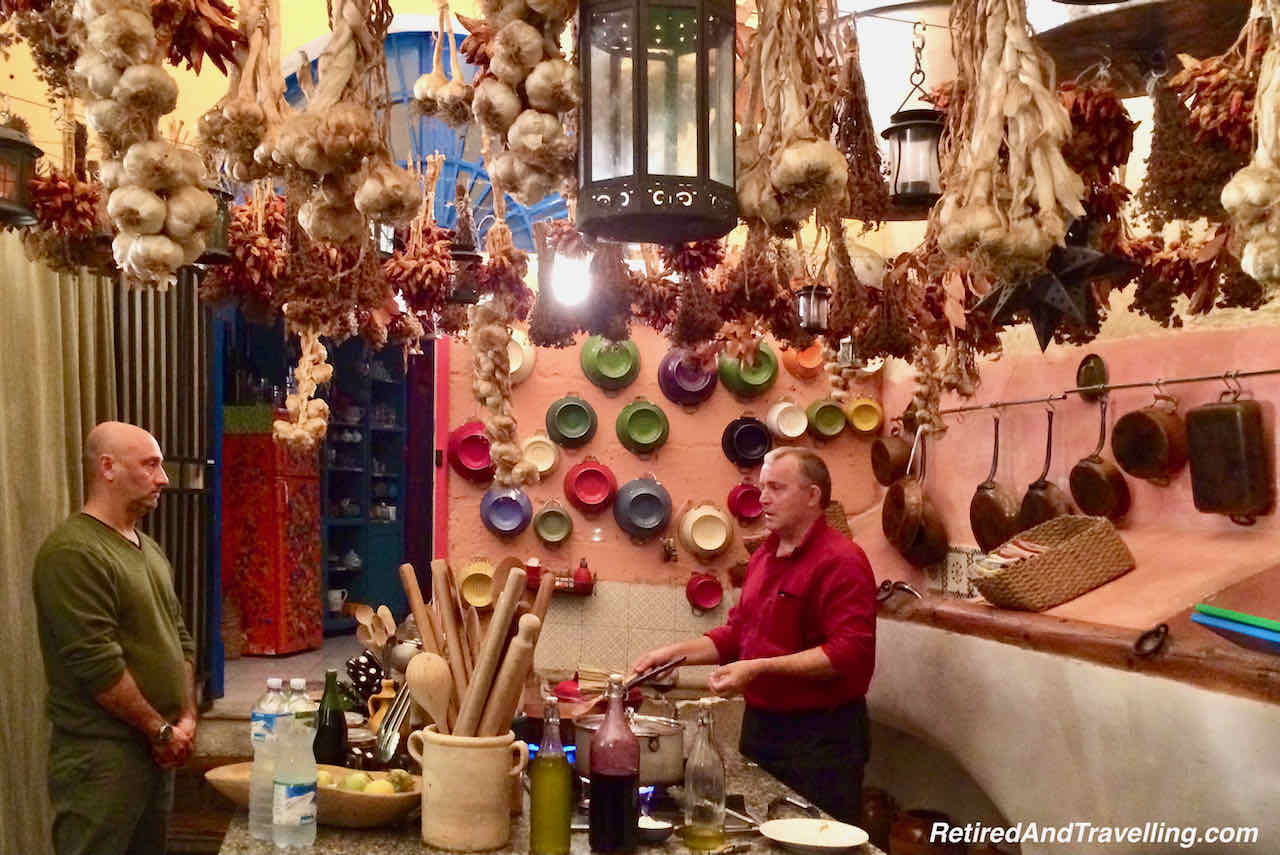 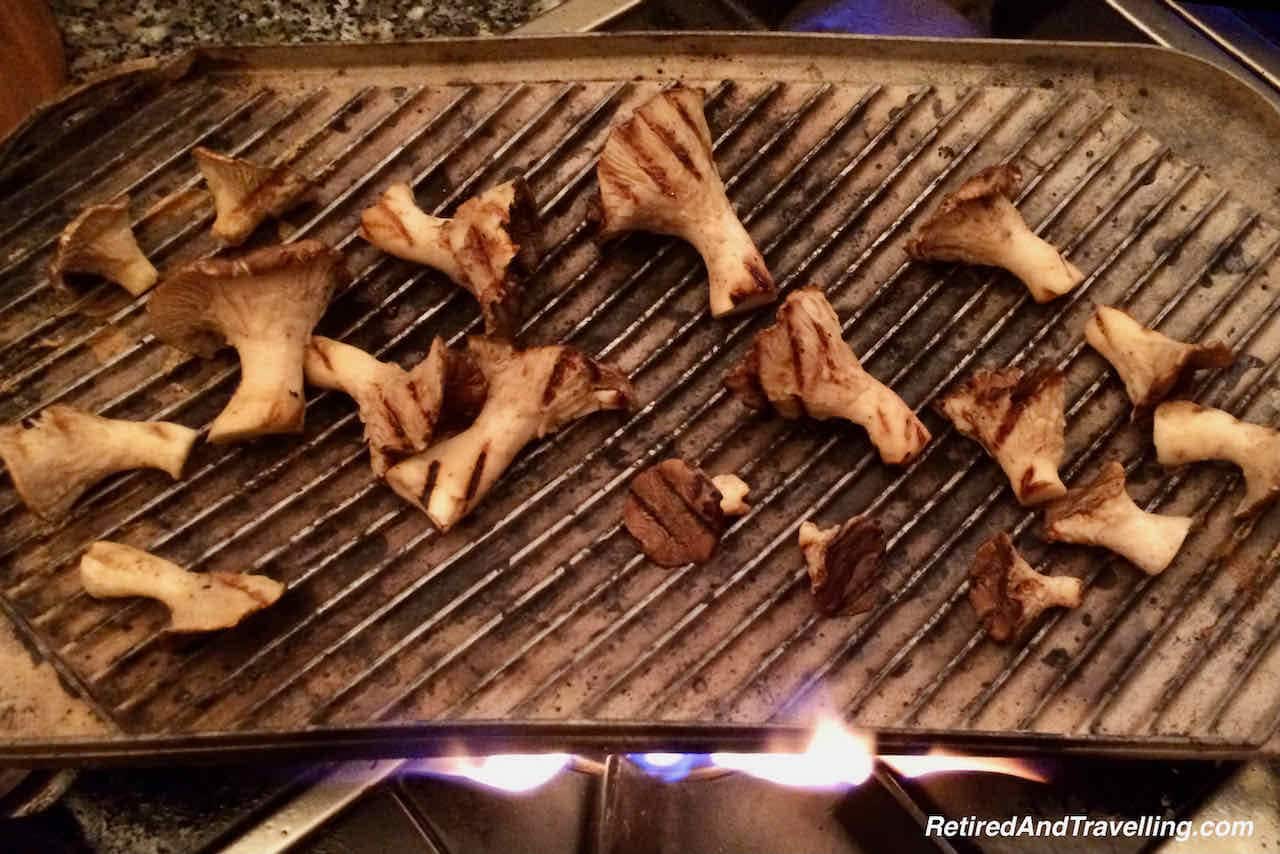 The chicken was finished with Il vincotto (a kind of grape musk) that Silvestro made the previous week. This was reminiscent of Aceto Balsimica in taste.  It was sweet enough to be used as the garnish for our sweet ricotta pears for dinner.

The last thing we cooked was the Orecchiette pasta we made that morning. Since this pasta sat out for several hours to dry, we saw the change in colour and texture.  It was noted that this pasta would take much longer to cook than the morning’s freshly created pasta. 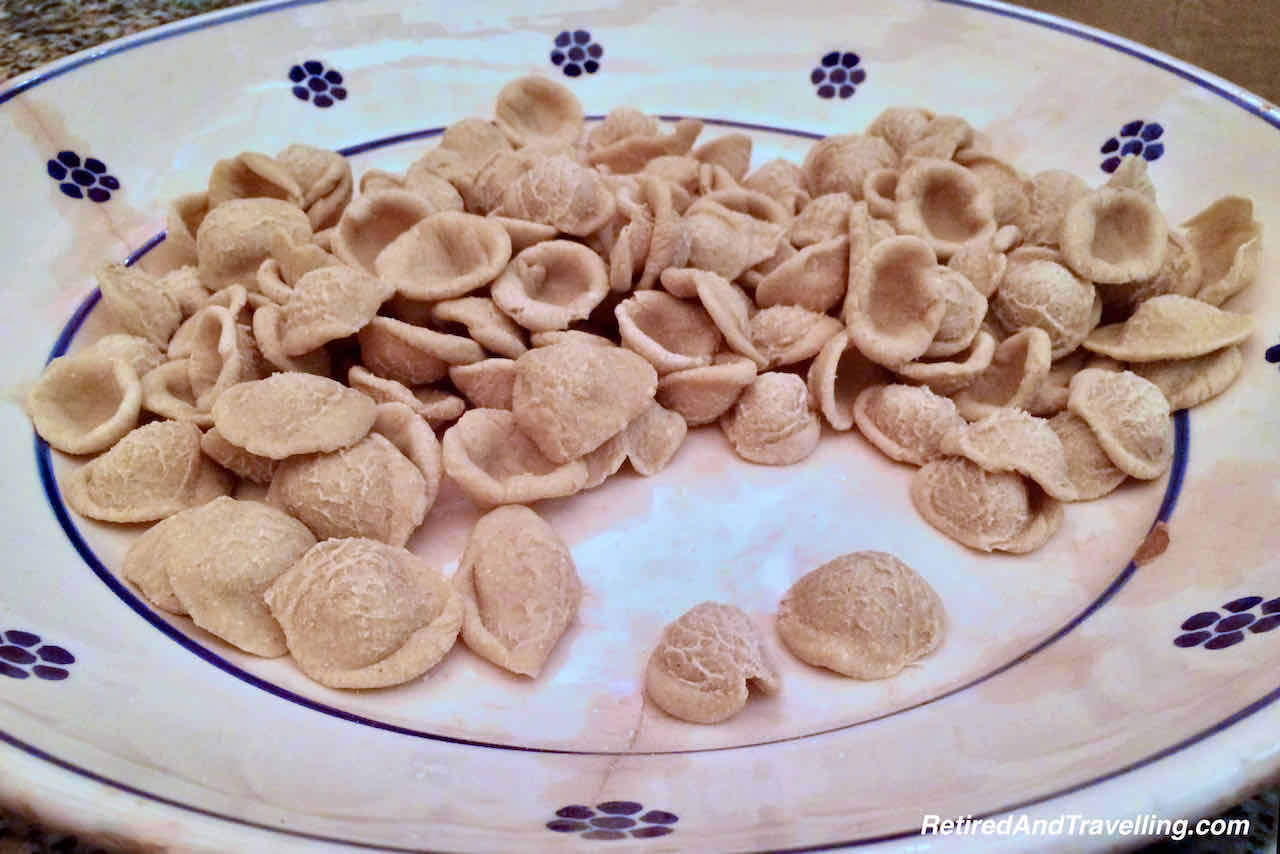 The liberally salted water came to a boil and in went our pasta. Trying it after about 6 minutes we found the pasta still tasting doughy.  This was a good sign that the pasta still needed more cooking.

A Southern Italian Dinner With Wine

With dinner all ready we sat down to three courses – pasta, then chicken with mushrooms and finally sweet ricotta pears. 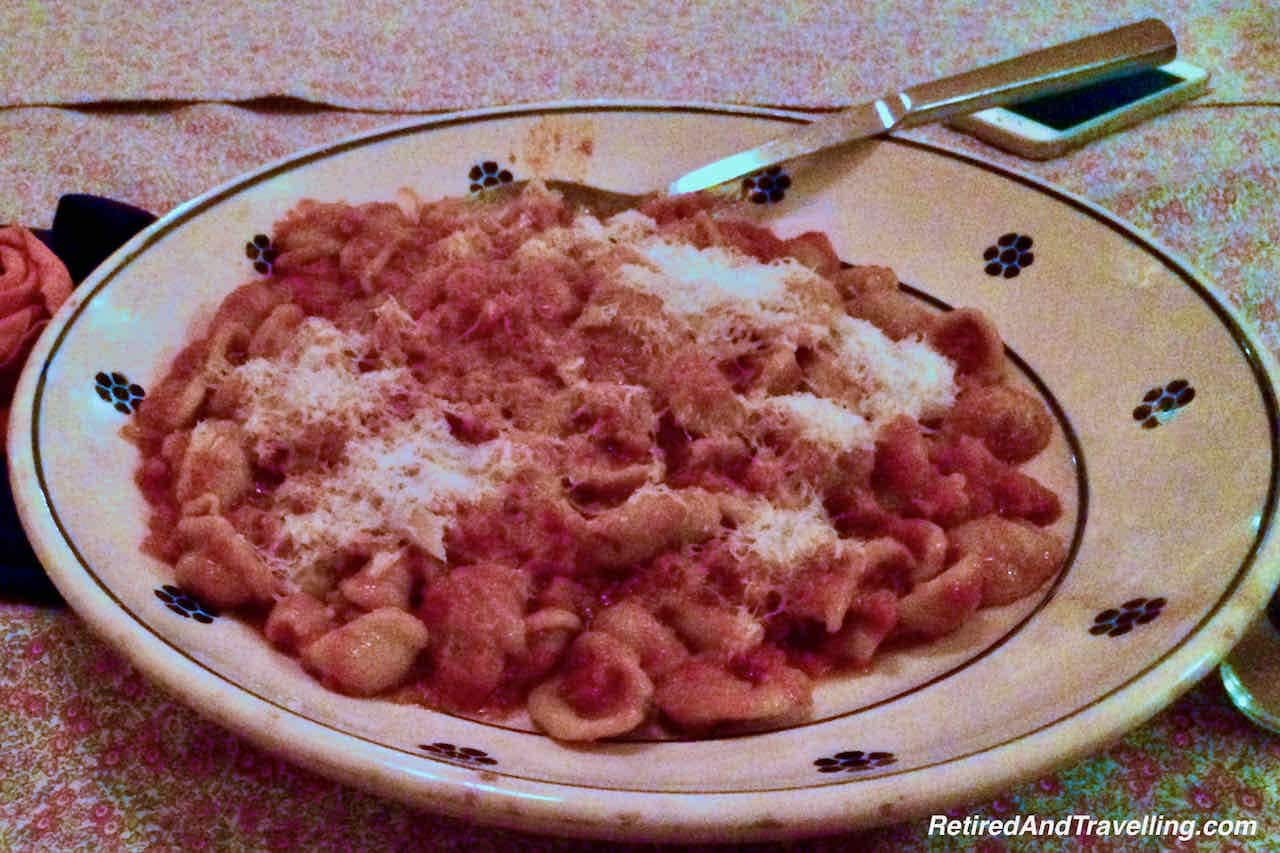 Silvestro  provided additional insight into Southern Italy cooking and wines of the region.  He even gave us some tips on places to visit for our week in the Puglia region.  He was particularly keen on the most southern Salento area.

We headed out to walk the trip to the hotel for the third time that day.  We certainly needed to work off a little of out great dinner.

It was a full day of education on eating and drinking in the Salento region. Sylvestro was peppered with questions through the day and he readily shared his love for food and for this region of Italy. 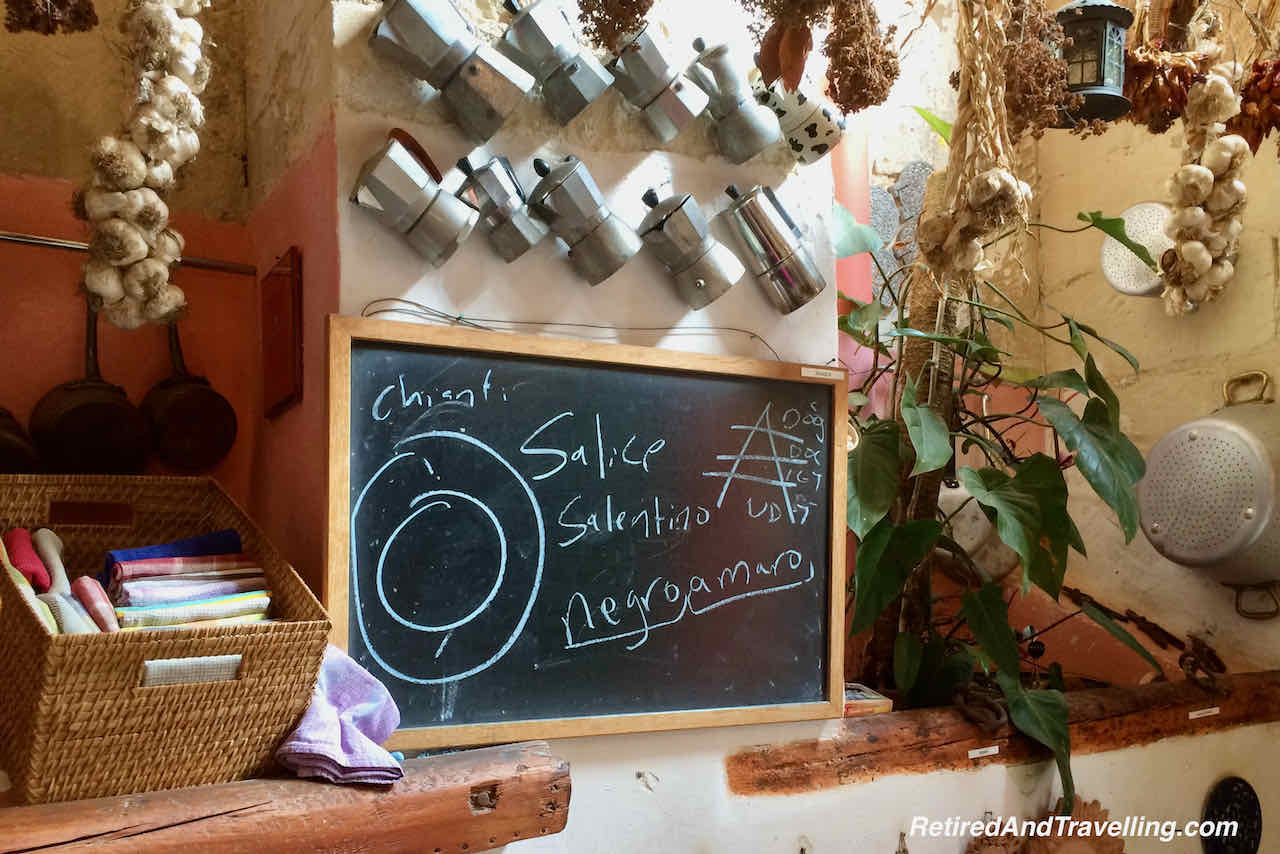 A few things we came away with after learning Southern Italy cooking in Lecce:

A Great Day At A Southern Italy Cooking Class

We walked away understanding much more about the “why” of Southern Italy cooking and drink.  It gave us more insight into the culture and the lifestyle. So much different than when we looked at the food of Bologna!

What have you learned about?  Any other tips to share?  Did you love the food of Puglia? 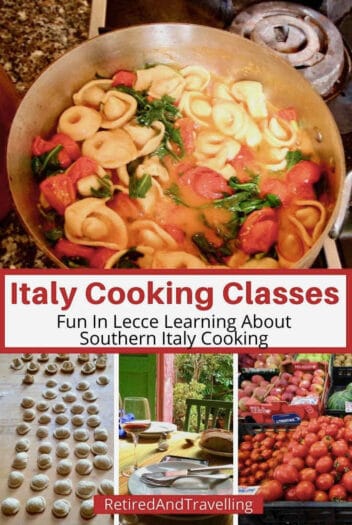 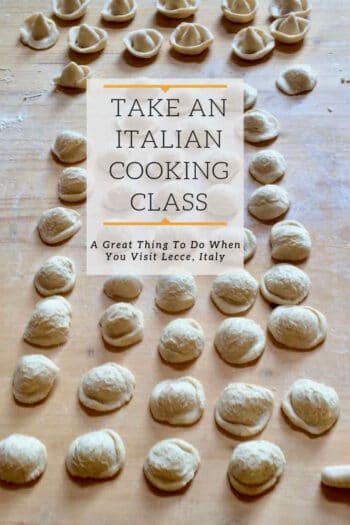 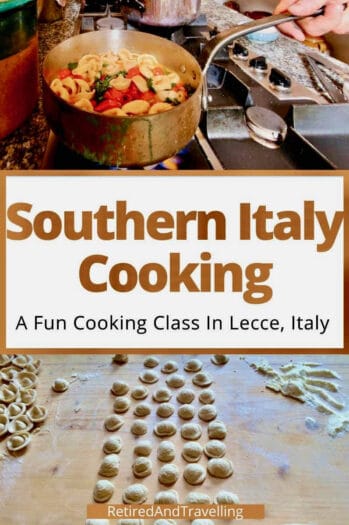