Plan To See The Venice Regatta

Normally we do really poorly at planing our trips to align with major events in a town. This time we hoped to do better! We had timed our visit to Verona to ensure we could see at least one show in the arena.  And we were in Verona when we could catch a train for the Venice Regatta.

The Venice Regatta has been going on since 1315.  It commemorated the historical economic and political influence of Venice. There are two parts to this great gondola event – the procession down the Grand Canal and a series of rowing boat races. 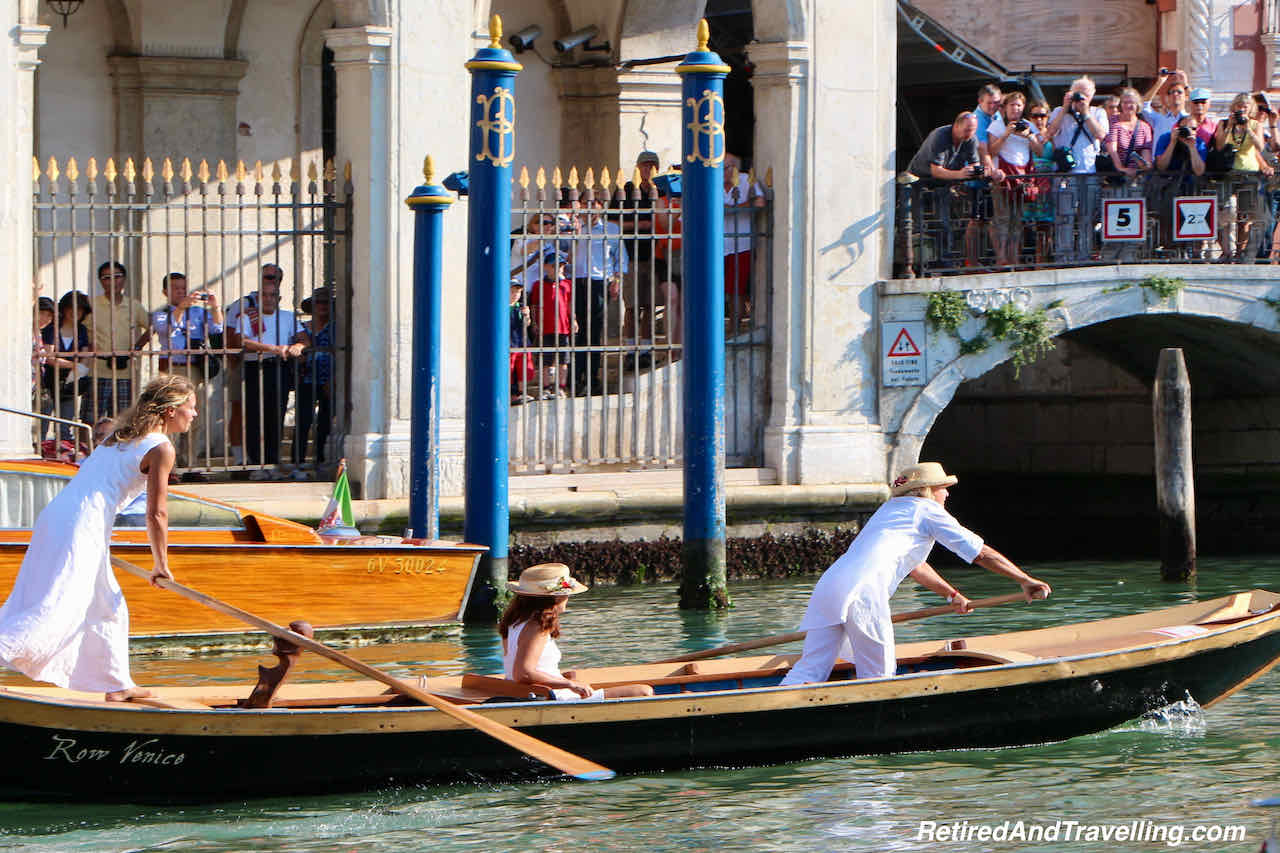 Winning at the Regatta is a big deal, giving rowers a place in Venice’s history. Doing some research in advance, we briefly considered getting seats on the floating raft.  This option was reasonably priced for locals but a bit more expensive for tourists who would have to fight for first come seats with families who could bring their kids almost free. We ultimately decided not to tie ourselves to one spot.  And hoped we could find a good vantage point. We knew what the route was but we didn’t factor in how much of the Grand Canal was faced by buildings with no walkways!

Heading To Venice From Verona

Unfortunately our day in Venice was right after our very late night at the Verona Arena for Romeo and Juliette .  So we dragged our butt out of bed as the sun rose to catch an early train to Venice. Going as a local on the regional train in 2nd class was an experience. The train got more packed with each stop enroute to Venice.  It made us wish we had splurged for 1st class fare on the fast train. The Venice Regatta was as much an outing for Italians as it was for foreign tourists.

It was great to be back in a city we visited twice before.  It felt familiar as we left the train station and walked past the tourists with their maps in their faces trying to figure out which way to go. Little did the virgin tourists know! They would soon find that even following street signs would add to their confusion.  Often the sign had arrows in both directions to key tourist spots like San Marco. 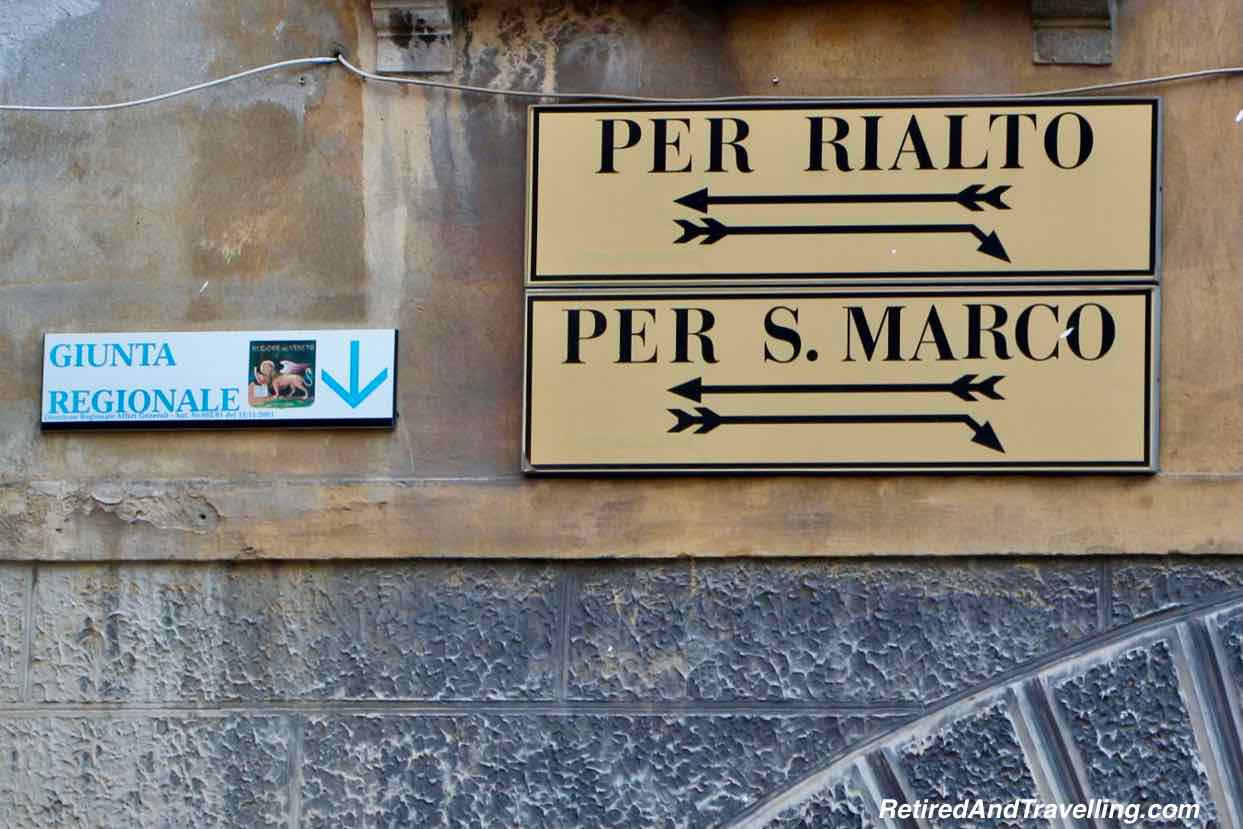 We had an electronic version of our Venice map that worked great with Location Services turned on.  Since I had data services on my iPhone this trip, we could even use the Apple Maps app. But getting lost in Venice was part of the charm of Venice.  We walked down little alleys and discovered new sights or cafés to stop at.  Most times we waled into a dead end and had to retrace our steps.

We had one thing on our “to do” list for Venice – to cross the Grand Canal standing on a traghetto. For 1€ we could test our balance, hoping a vaporetto did not pass too close.  We chose one the 7 crossing points at San Toma. Luckily this was a weekend. No locals used this as their regular crossing path and it was not high on most visitor’s lists. This left us with a mostly empty traghetto.  And lots of room in case I fell down. While a bit shaky on take off, David and I both managed to relax and stay standing as we crossed. 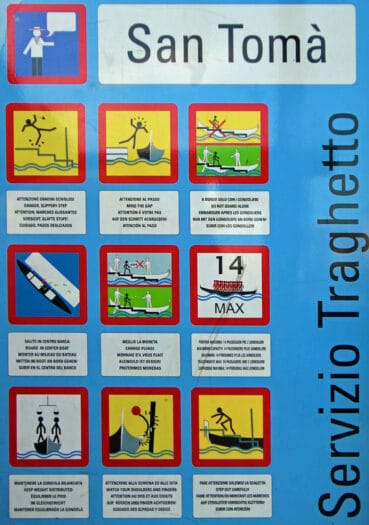 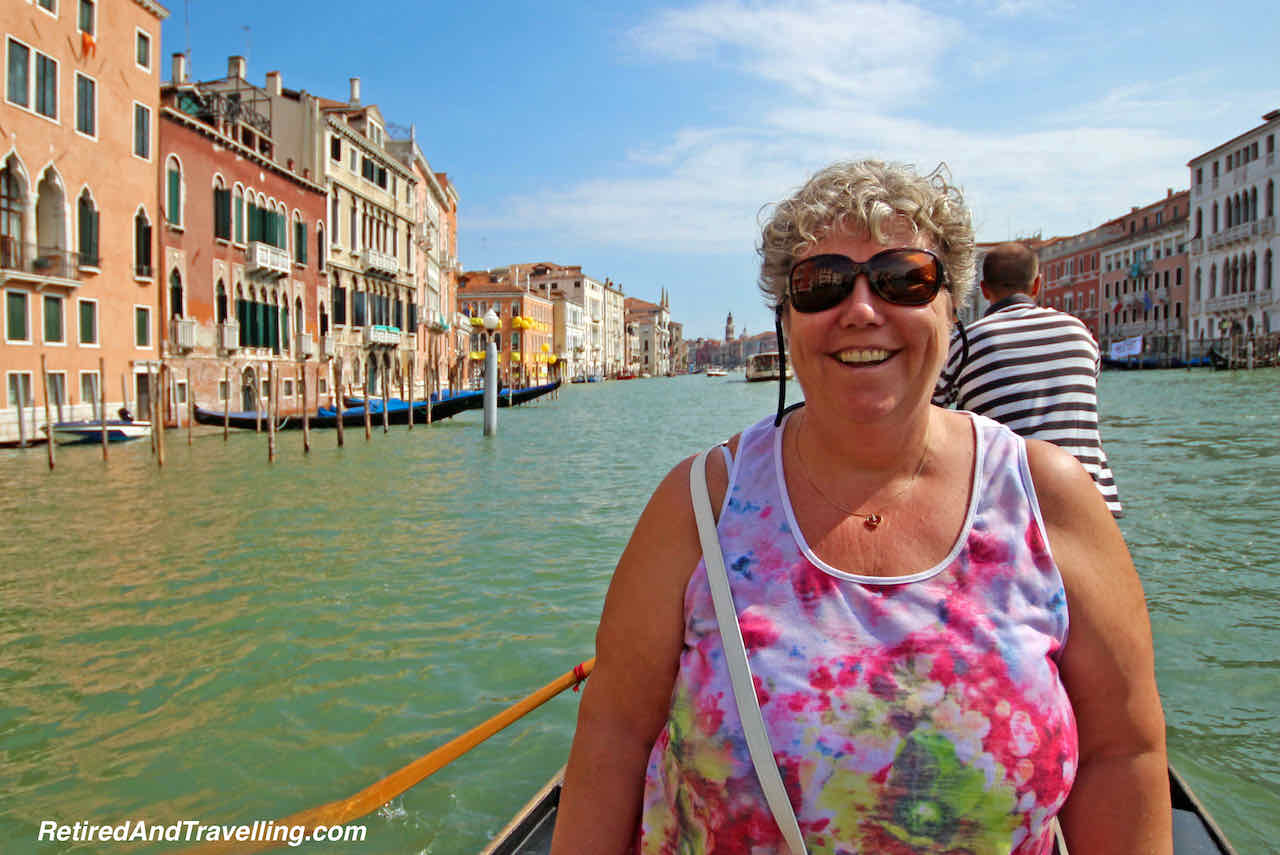 Other than the Regatta, we had no objective for our day.  So we wandered and stopped and wandered in a meandering path trying to pick our spot to watch the show. There were a few places that might work for us to squat (by the S. Angelo vaporetto stop, just the other side of the Rialto market or on small canal bridges right up at the Grand Canal). Enterprising locals put down chairs and were charging for seats at many good vantage spots.  The spots came complete with beverage services. 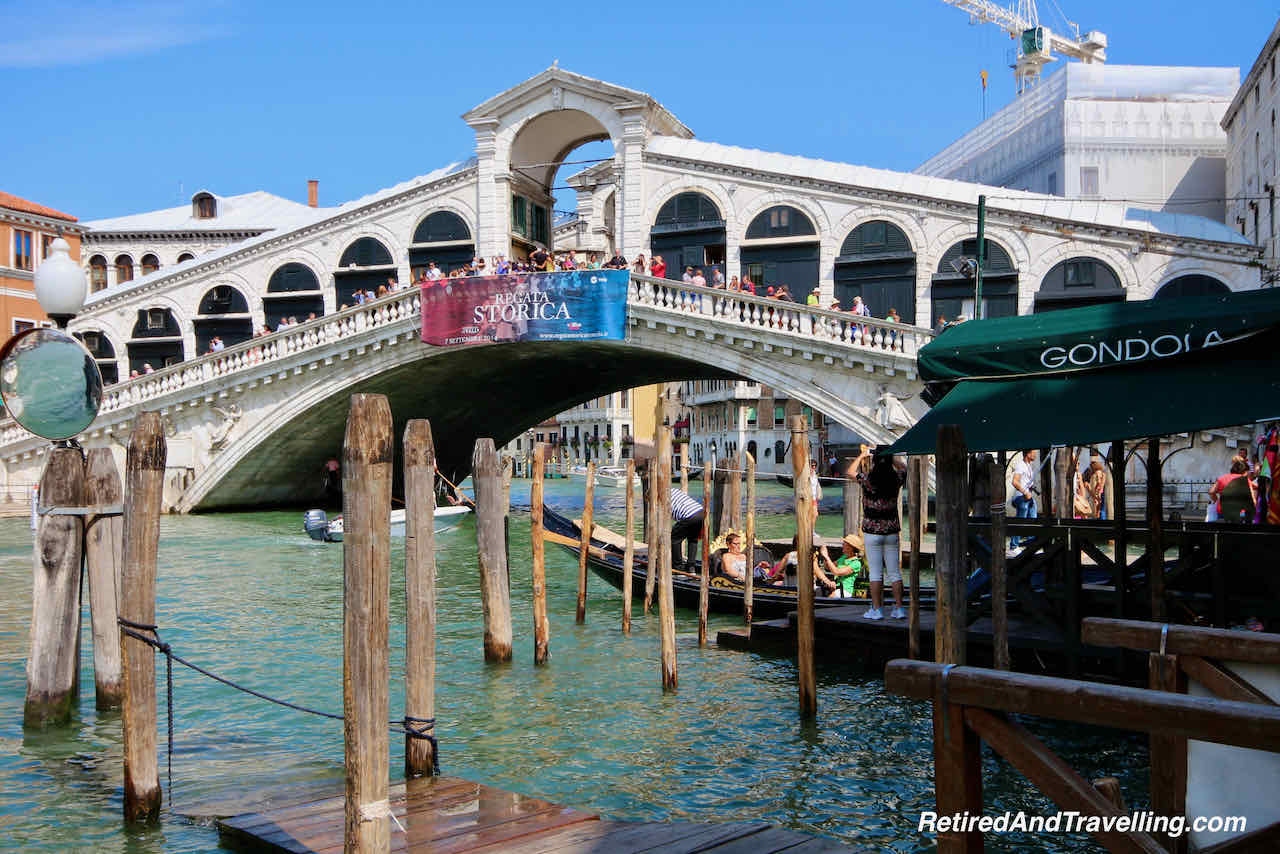 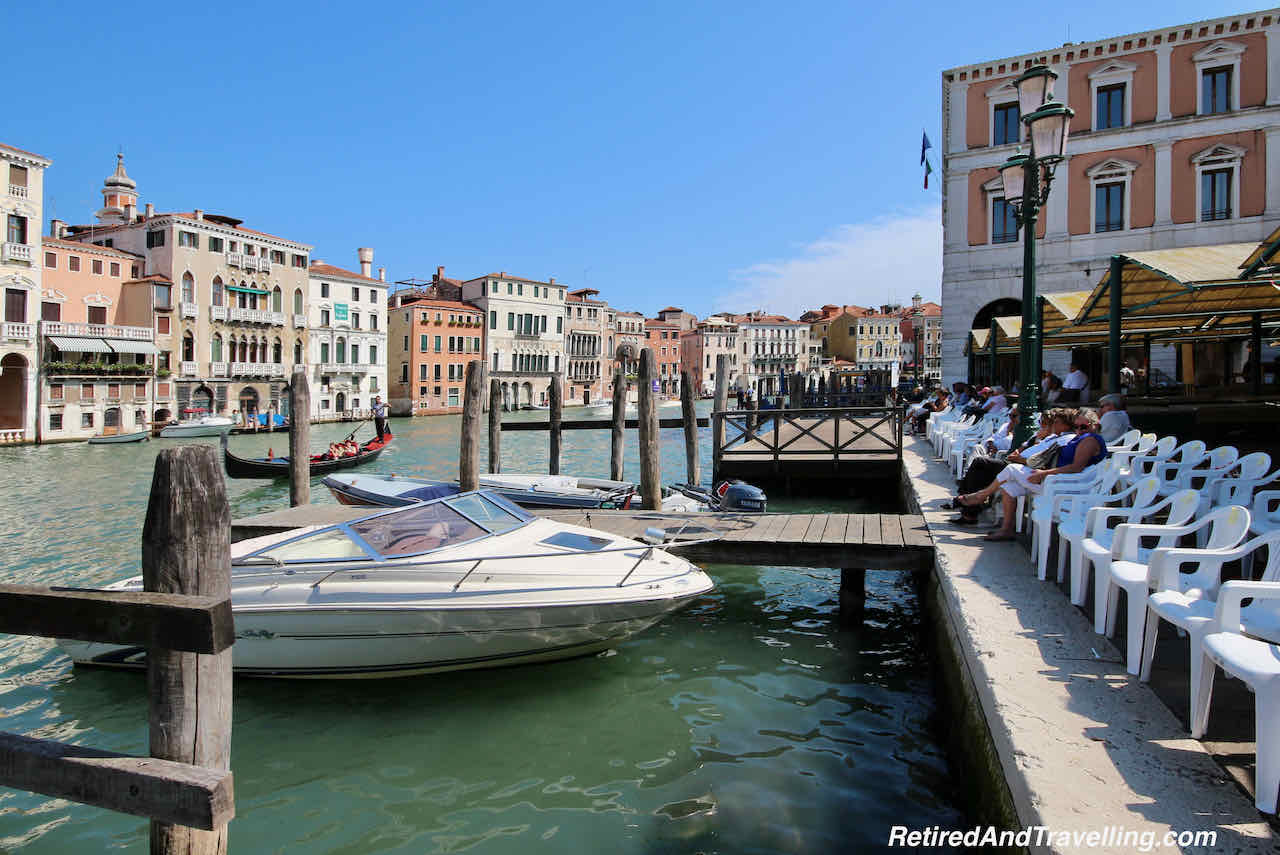 The mercato had largely shut down by the time we got there but there were a few stalls selling produce still open. Grabbing two large slices of watermelon, we plopped down in the shade with a view of the Grande Canal and caught our first glimpse of gondola racing teams warming up. 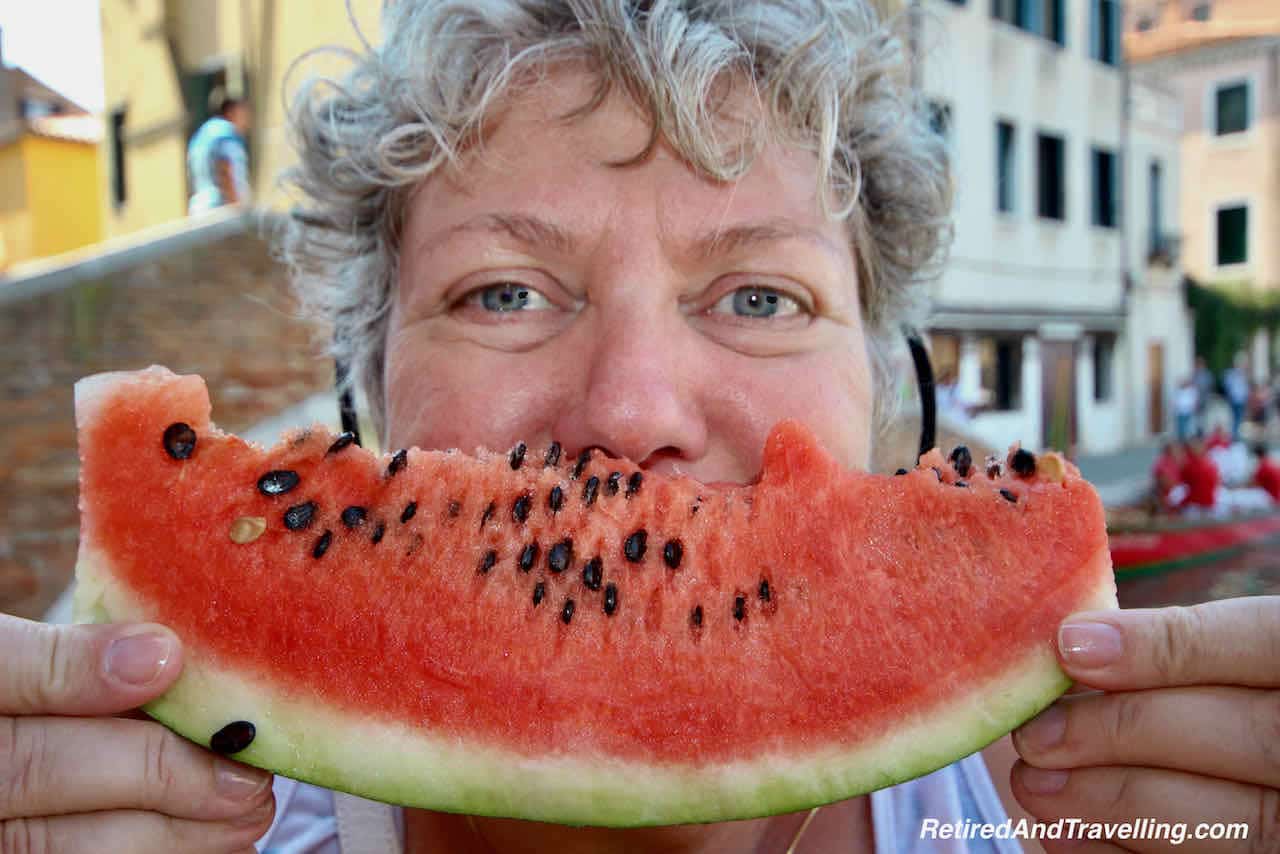 A Perfect Stop to Watch The Venice Regatta

We finally decided to splurge on a canal-side restaurant close to the Rialto Bridge (Ristorante Terrazza Sommariva).  We could reserve in advance for a great seat.  Even if we were wedged in like sardines with other like-minded locals and tourists. This allowed us to wander a bit more before the Venice Regatta started.  It would also give us a late lunch.  Everywhere people grabbed a spot to sit. Some were sitting in gondolas complete with picnics and champagne. 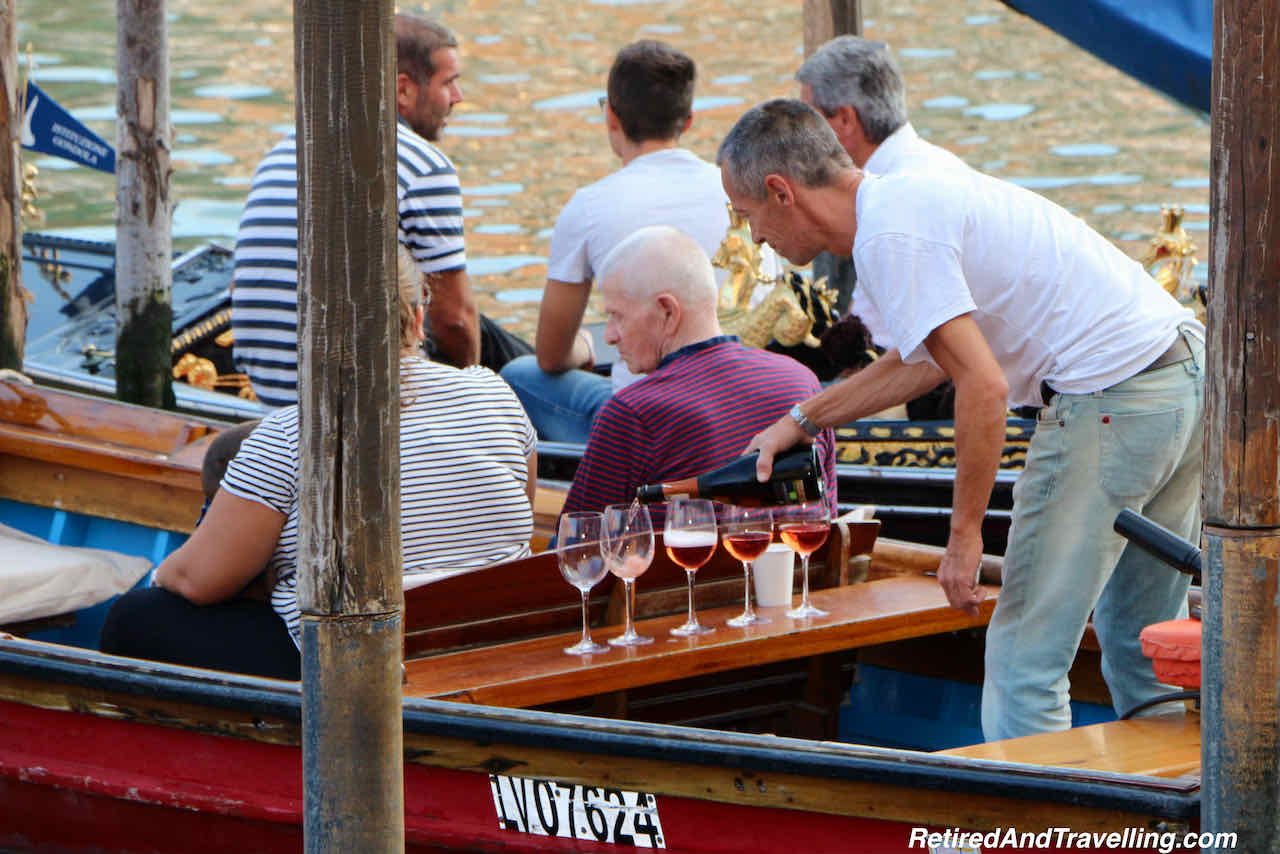 One adventurous couple tried to bob in kayaks in the current created by the passing boats. The small bridges facing the Grand Canal were packed with spectators. Nobody wanted to miss the show. 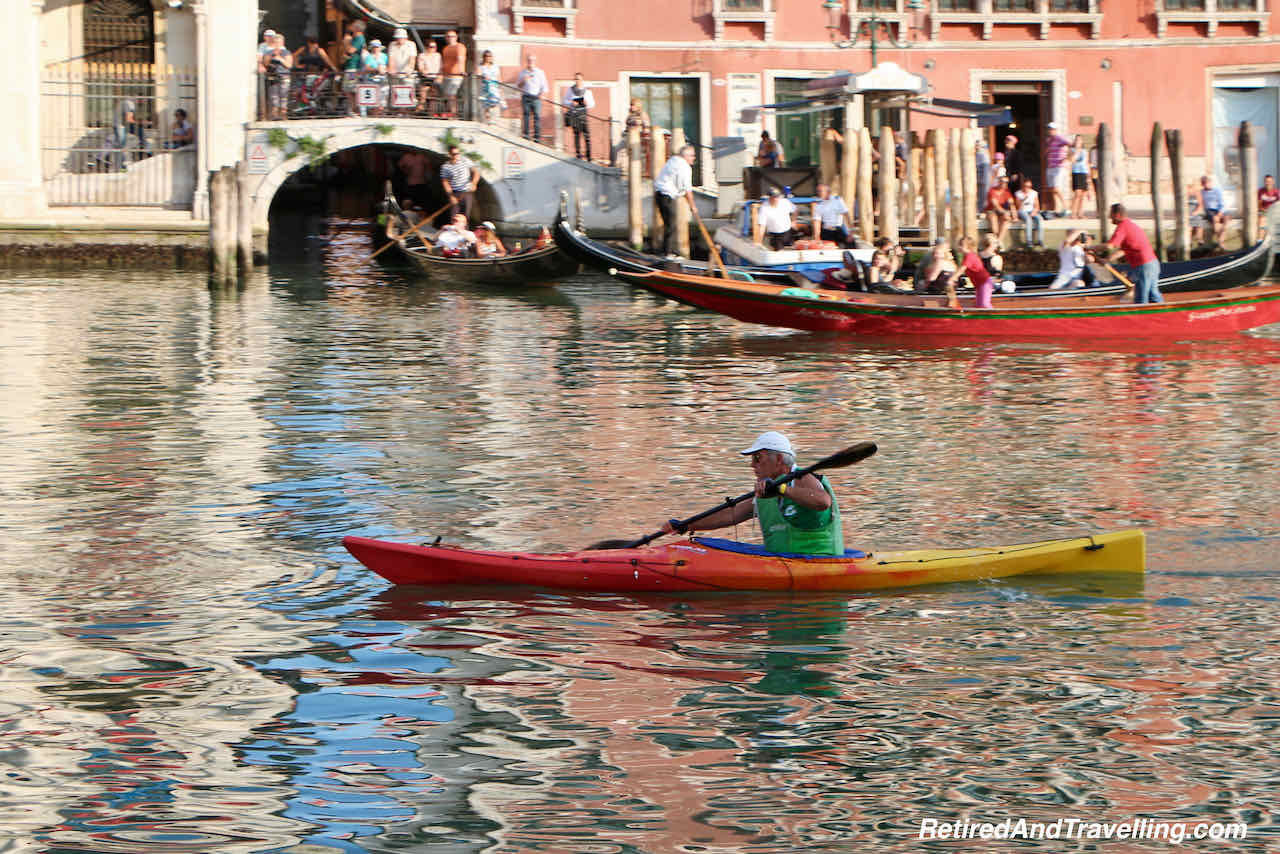 While most of the locals arrived at the restaurant at 2pm, we didn’t get back until about 3:30 for the pageant start of 4pm. By then, most people had almost finished eating. We should have thought about wanting to be finished eating before we would sit with our cameras in hand.  But we had a slow meal with a bottle of wine and enjoyed a enchanting few hours of great entertainment. 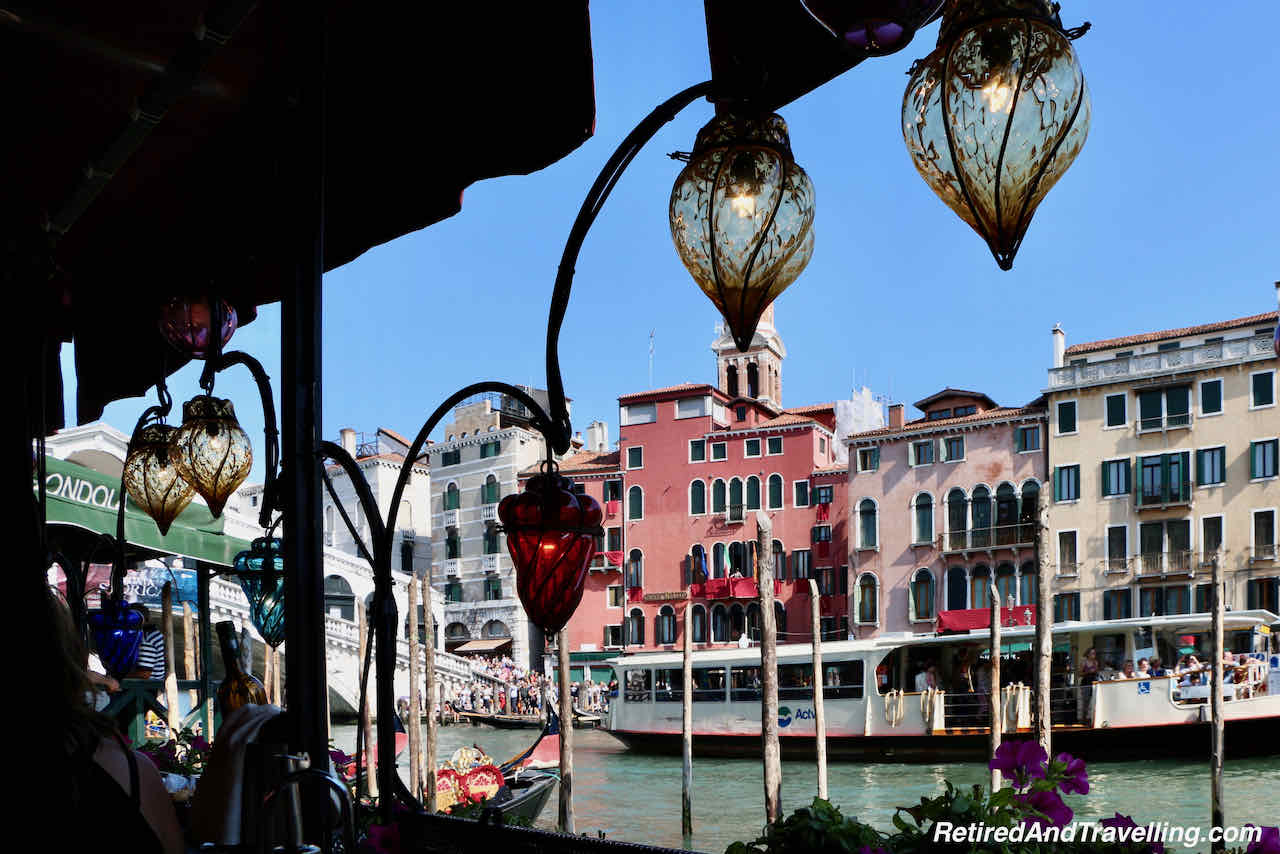 Colour And Pageantry At The Venice Regatta

The first part of the Venice Regatta was the pageant of boats of all sizes and periods. We had a great view of the Rialto Bridge with the vibrant show going by. It was a spectacle of colour. The boats competed in the various races and promenaded past in both directions giving local supporters a chance to cheer for their favourites. 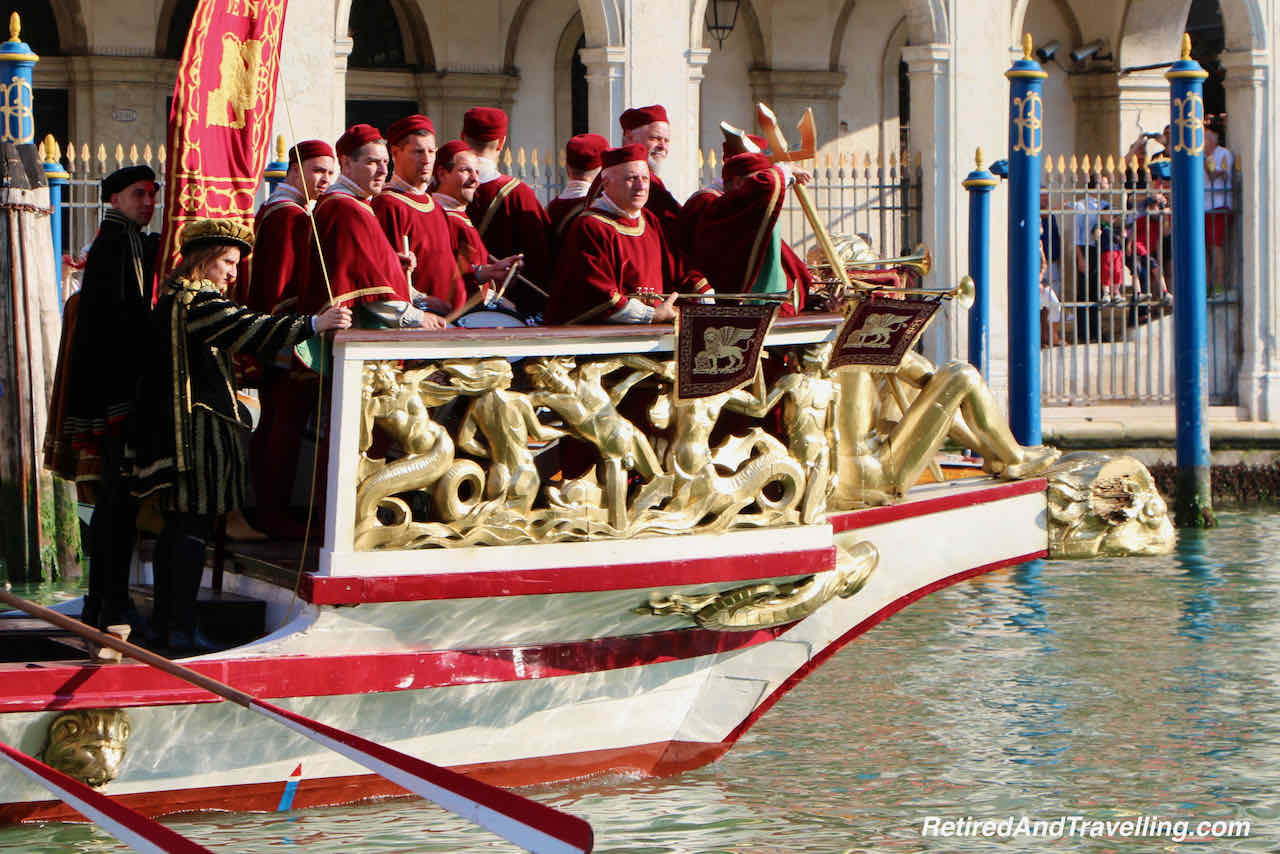 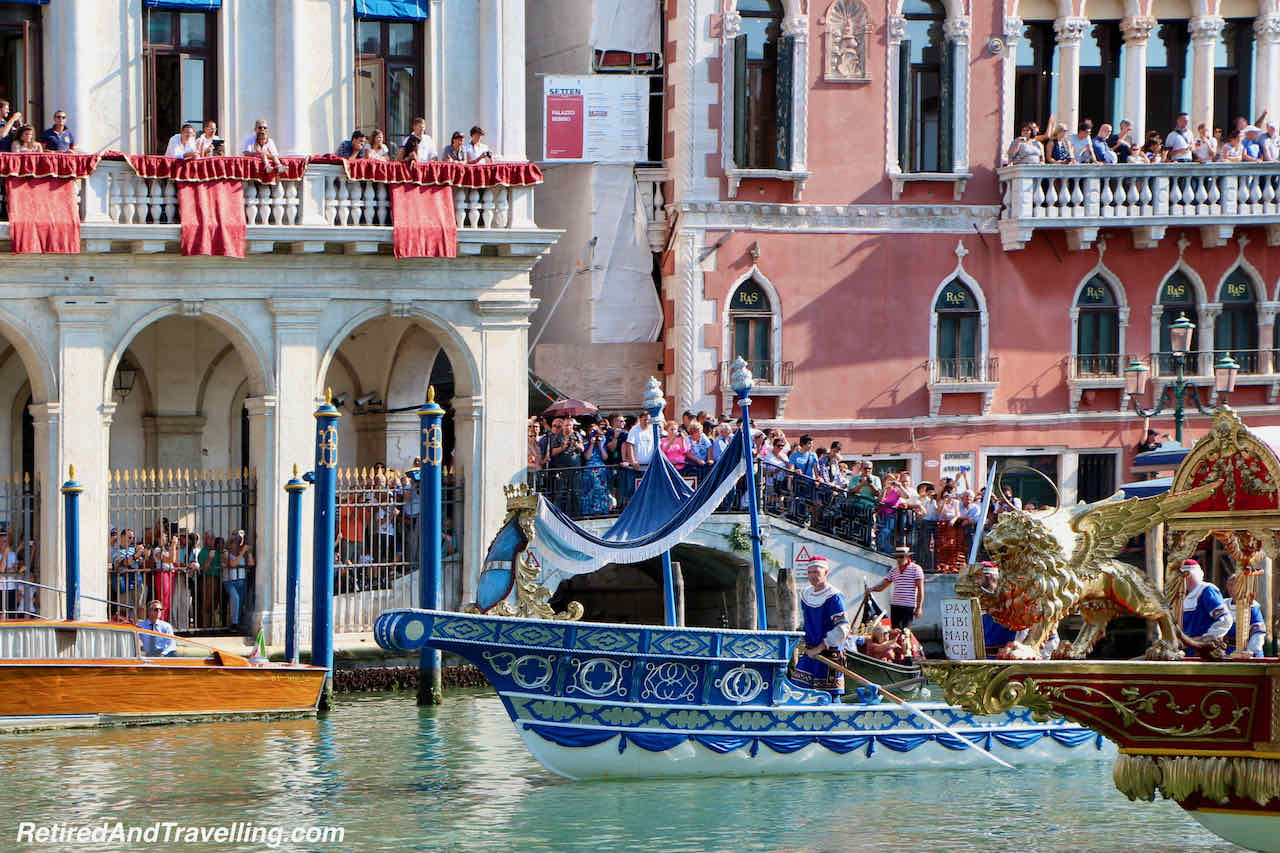 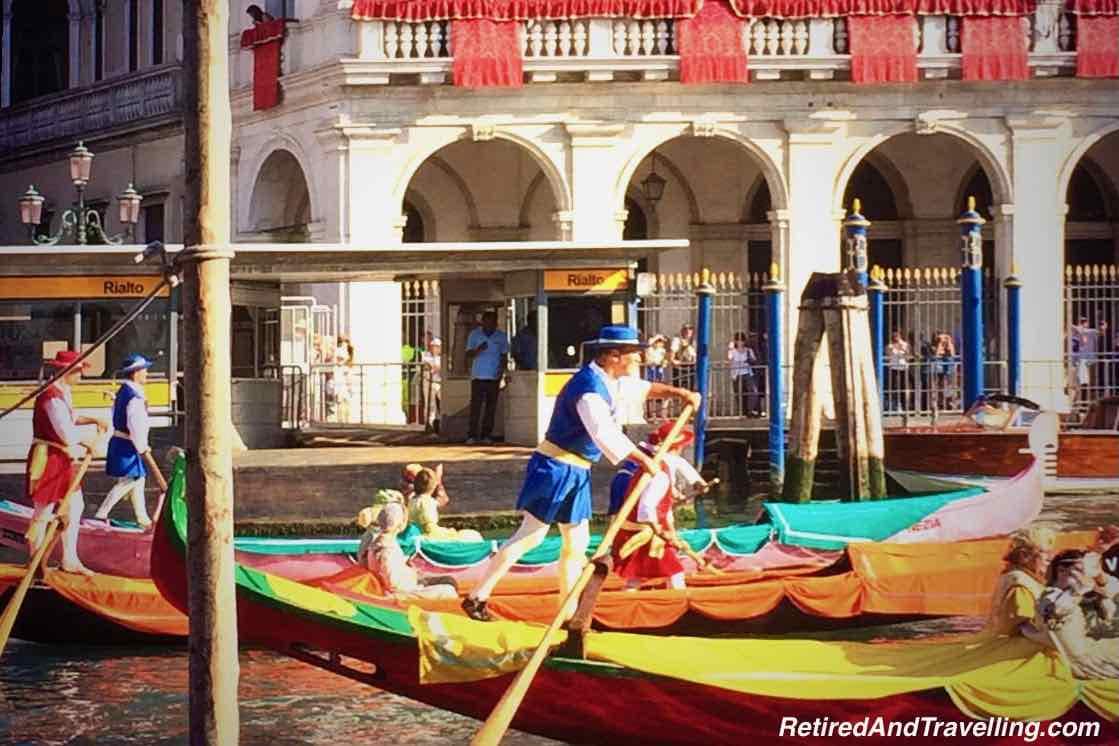 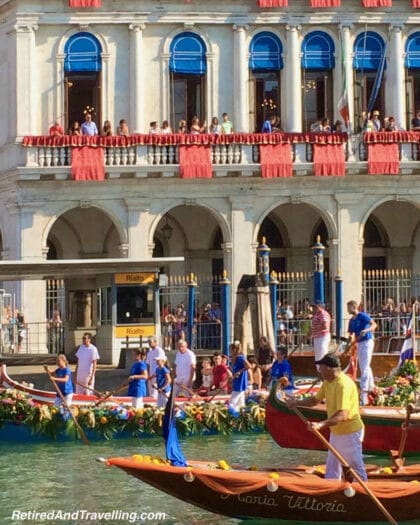 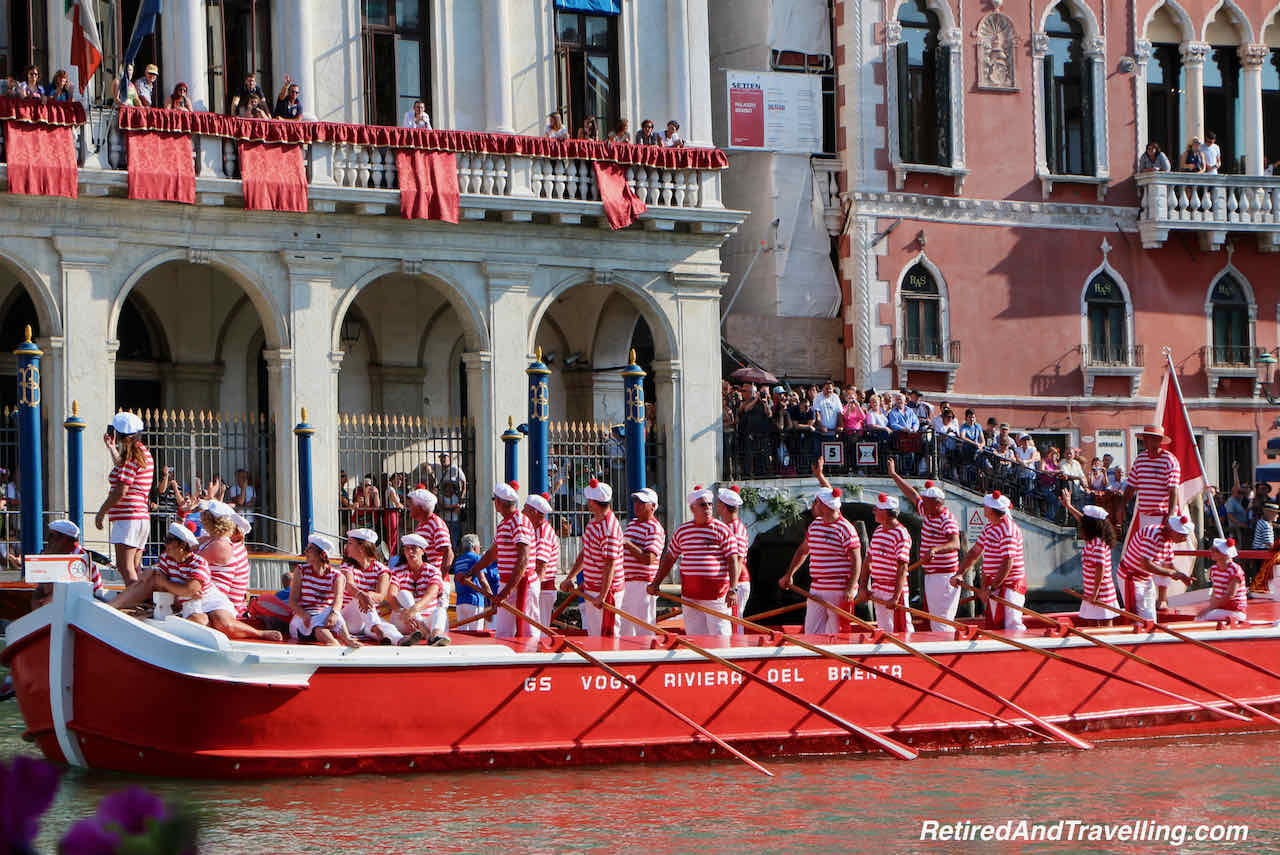 There was an announcer close to where we sat and he narrated through parts of the pageant and during the race.   His voice melded with the music, the cheering and the general noise. The racers went streaming past us down to the train station.  And then back past us to the finish line around the bend. 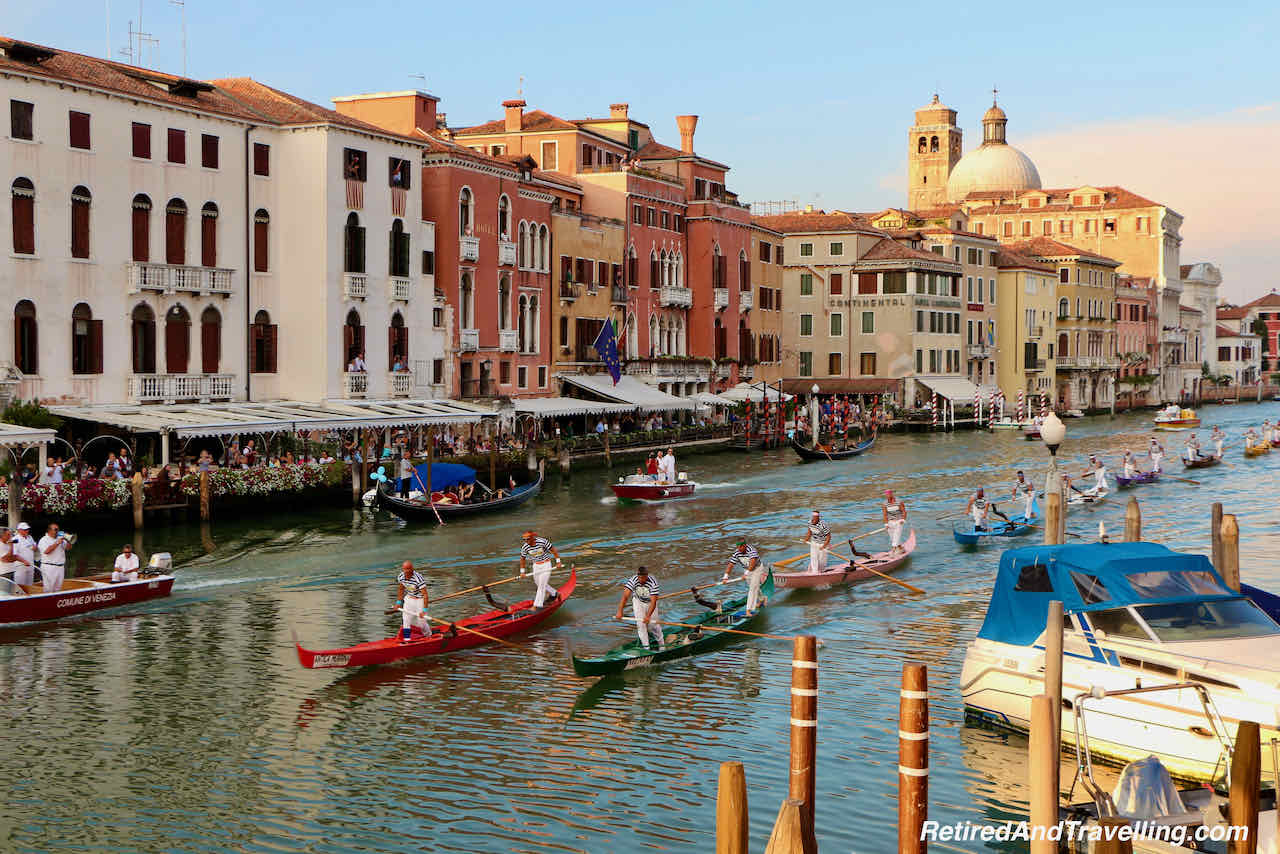 The various races covered younger kids, women and several classes of boat types. I can’t tell you who won.  But I can say that it was awesome to watch the colourful show.  And to see the strength and coordination it took to be a winning boat. 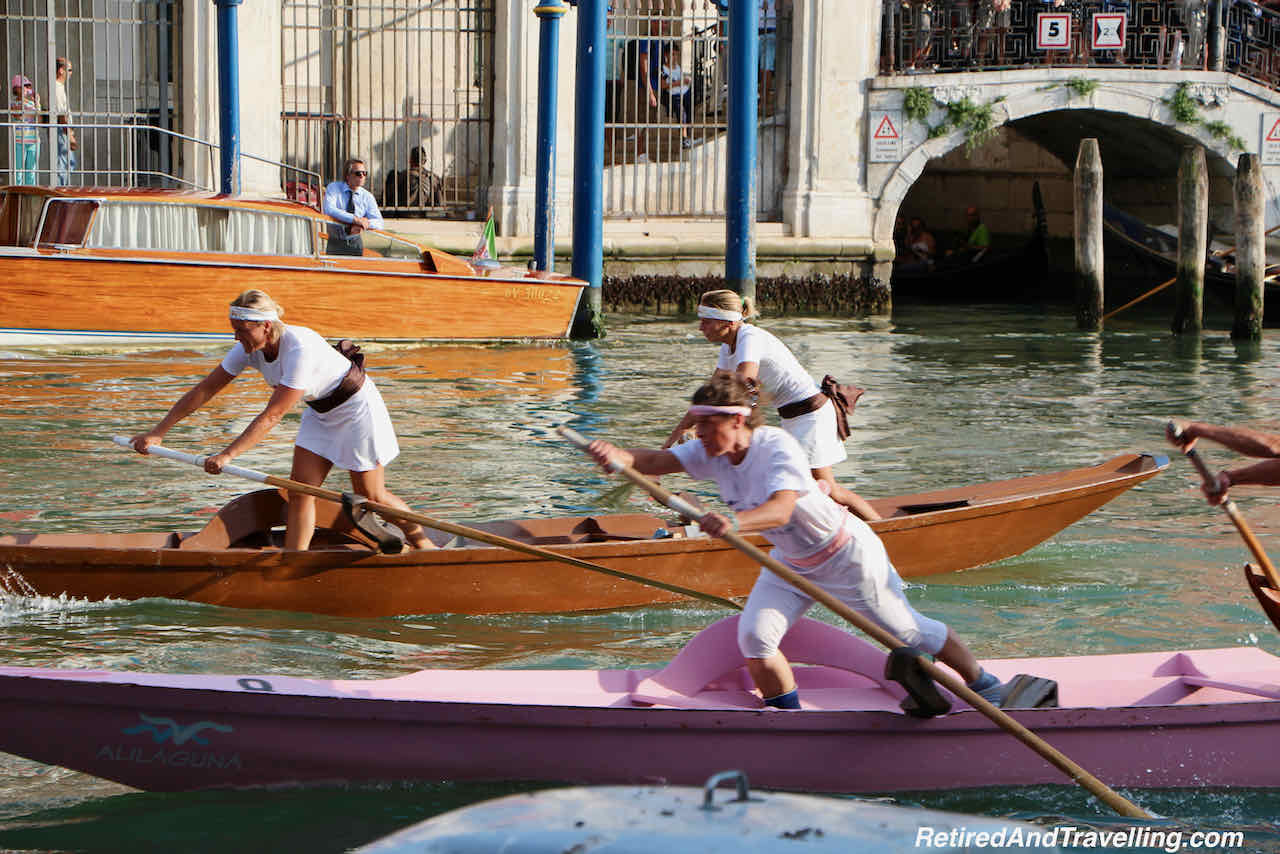 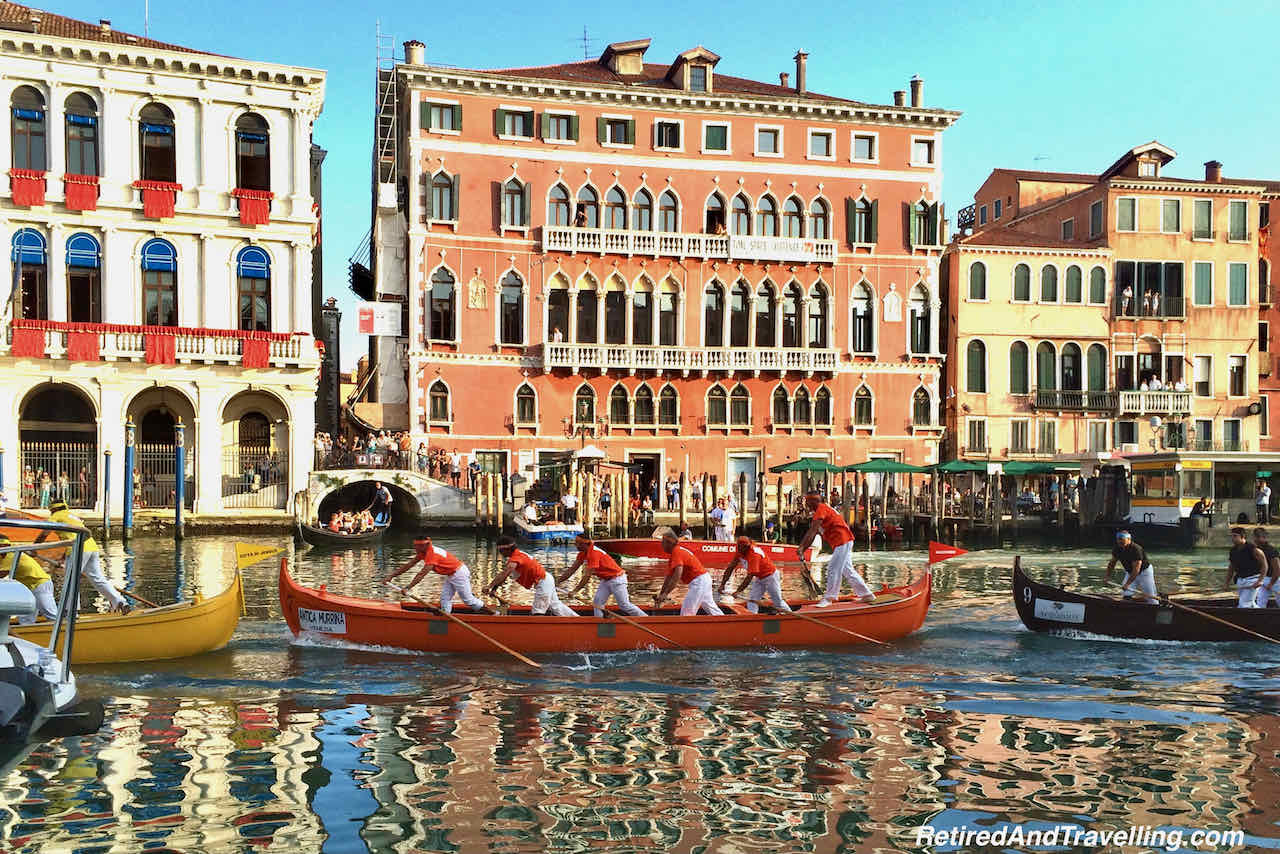 We Were  So Glad We Visited For The Venice Regatta

It was definitely worth the day trip from our stay in Verona for the Venice Regatta.  A restaurant spot allowed us to leisurely enjoy the show. We dragged our tired butts back to the train station earlier than our scheduled departure.  But managed to hop on a train almost immediately.  Leaving Venice as the sun was setting, closed another great long day! 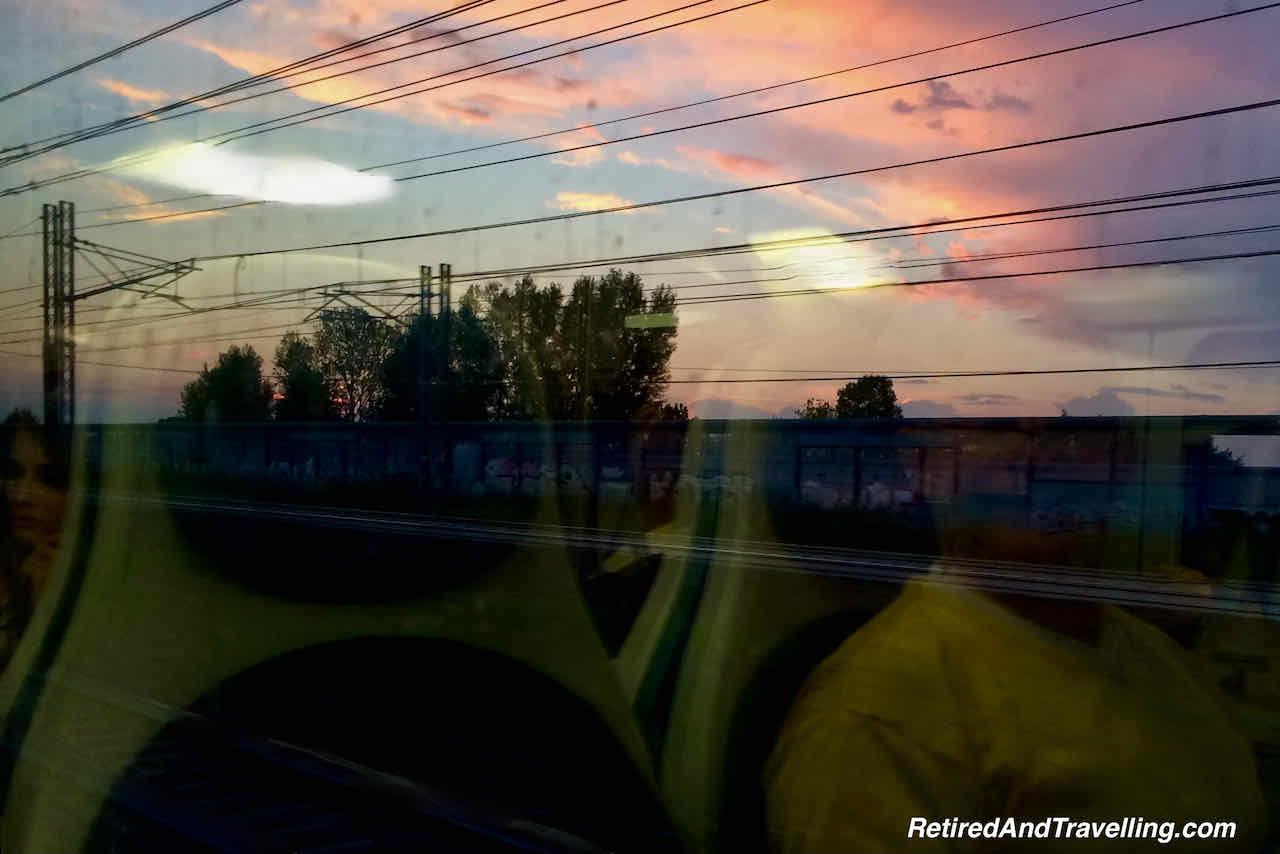 Have you been to the Venice Regatta?  Would you go back a second time? 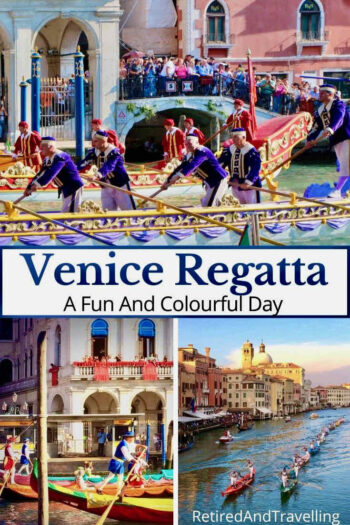 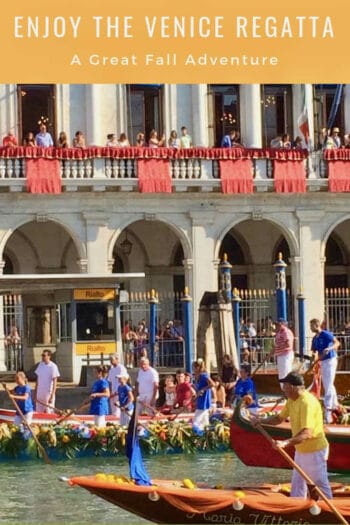 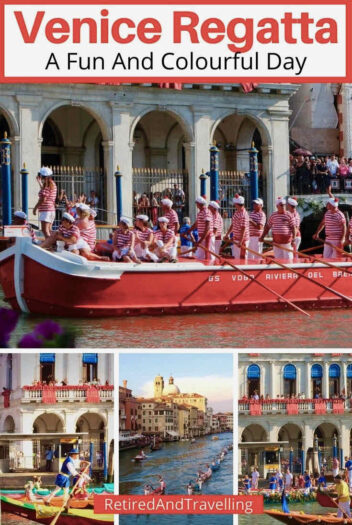