Verona City Of Lovers Was A Great Starting Point In Italy

The first stop on our 10 week Italy trip was ten days in Verona city of lovers!  We found a lot to see and do in Verona.  And enjoyed several day trips for art, wine and sightseeing.

When we planned our flights, we found a really good deal on a British Airways (BA) flight from London to Verona. The plane was fully booked so we could not change our seats to get me on the aisle.  Maybe that was why BA did not offer “pick your seats” when we did our online checkin?  It was a good thing it was a relatively short flight.

The gate info for our flight was not posted.  At one point the time noted for posting our gate info was later than our posted departure time. I guess that should have been a clue that the flight was delayed. The “Delayed” flag never got updated until the original boarding time passed.  I guess that was one way to not show the large number of delayed flights due to alleged fog.  I assumed that fog was a common thing in London? 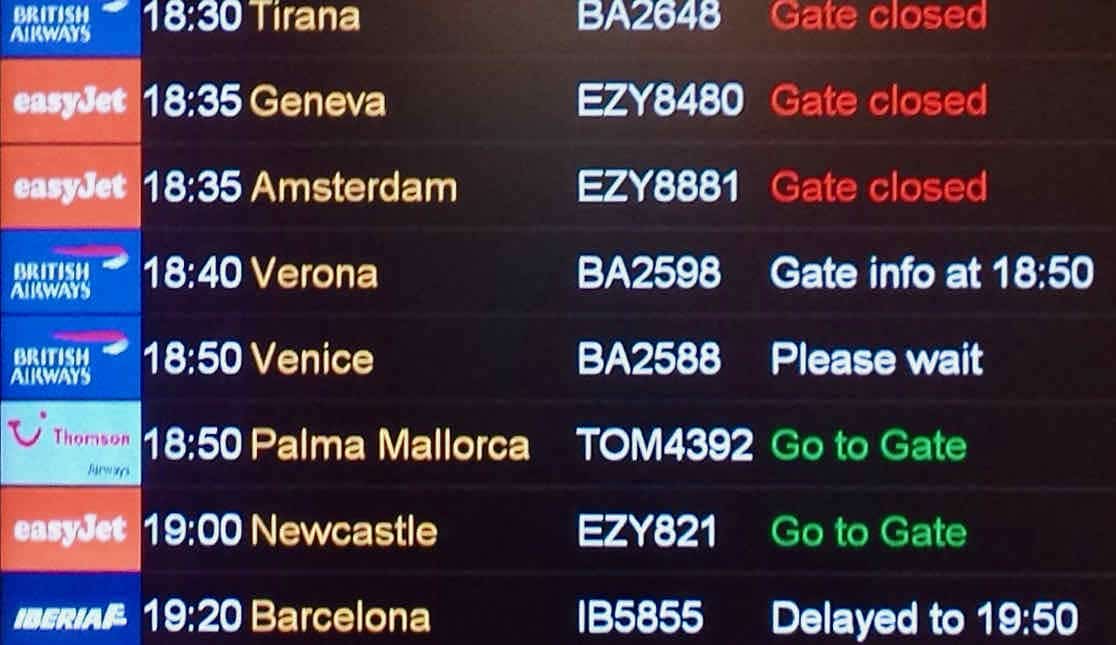 The plane finally boarded and after a quick flight landed very late in Verona. We were booked to stay in a B&B in Verona.  But we knew our flight from London was late and were unsure we would be able to get into the B&B so late.  So we cancelled the first night in the B&B and booked the first night in an airport hotel. We figured this was easier, especially since our B&B host offered to pick us up from there at checkout time.

We made it out of baggage check just before the last shuttle for our hotel at 11pm.  Foolishly we tried to find a working pay phone to call the hotel while everyone else on our flight found the shuttle outside.  Getting a local phone on this trip was definitely a high priority!

This earned the cabby a 16€ ride for the 5 minute trip to the hotel. By midnight we finally settled into our room after 2 trips to the front desk to get the air conditioning working.  Crabby and hot, we fell exhausted to sleep.

Getting Connected In Verona

On our first day we went in search of connectivity and easily found two shops on the same street. On past trips we survived with just free wifi where we found it.  But this time we wanted both a phone and some hotspot bandwidth. We were really surprised at how cheap and easy an option this was .  But then we pay way too much for all communications in Canada.

A not well publicized option for free wifi when travelling in Italy was to get a public wifi card. The card was available in public libraries in many larger towns simply by registering with your passport. Multiple devices can be registered and each got a unique card with ID and password for each.  It was quick and efficient. The only downside was that yet one more place had a copy of our passport!

We picked up our card at the Verona library. While we wandered around Verona, we now became aware of the locations where there was free (if not super fast) wifi.  It could help us out in a pinch!  We never did hit the library in any other town for our 10 weeks in Italy – but we kept this tip on file!

It was great to be back in a city we explored before. We knew the general layout of the old town and felt comfortable as we wandered without a map in hand. Our B&B was on the other side of the river.  So if we saw the big hill above the Teatro Romano, we generally got back to the right area and found our place.

We visited many of the tourist spots on our last visit like Castlevechio and Juliette’s balcony.  We considered the Hop On Hop Off (HoHo) bus for some attractions further out.  But we ran out of time before we did this! 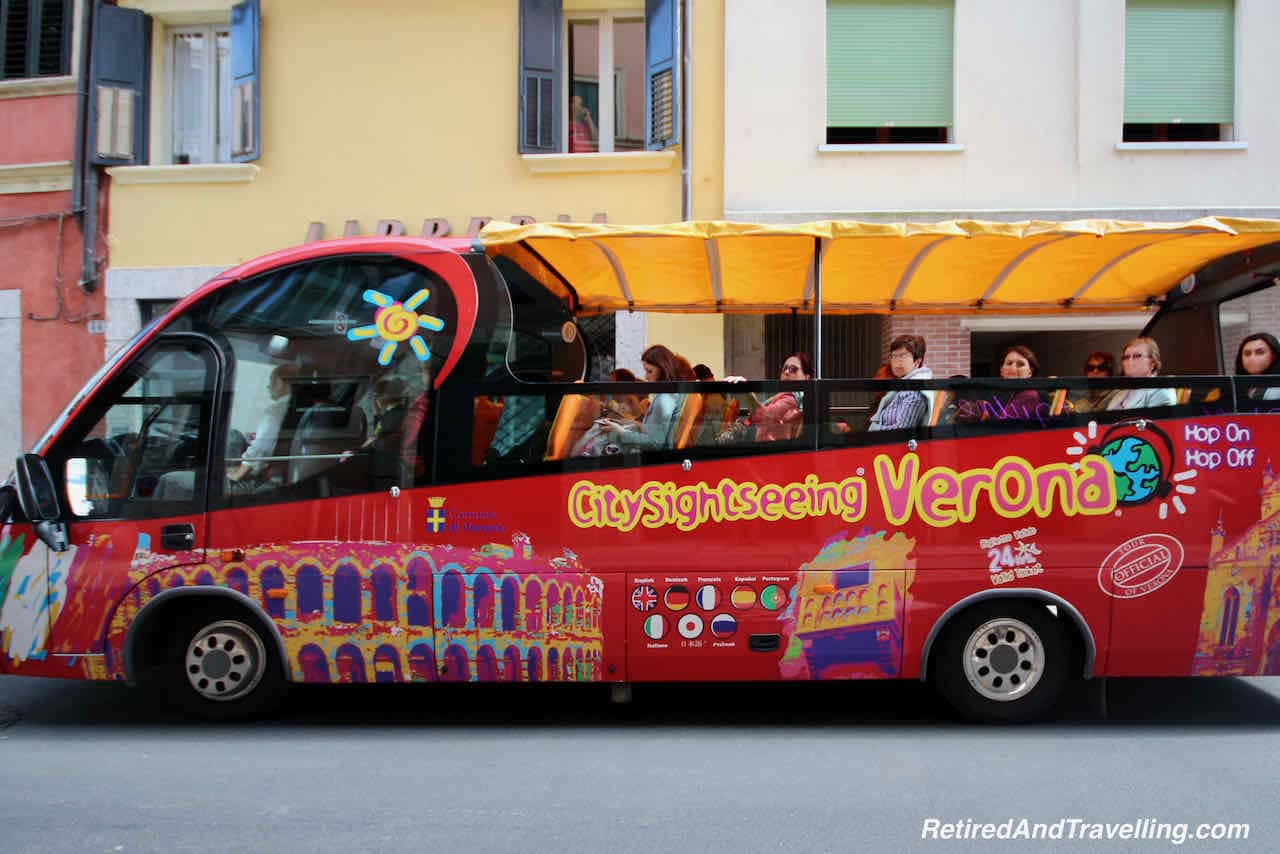 It was a busy 10 days in Verona City of Lovers. Some days we just wandered locally with no real purpose but to enjoy being on vacation. The Italiano lifestyle of people watching from the cafe suited us just fine. 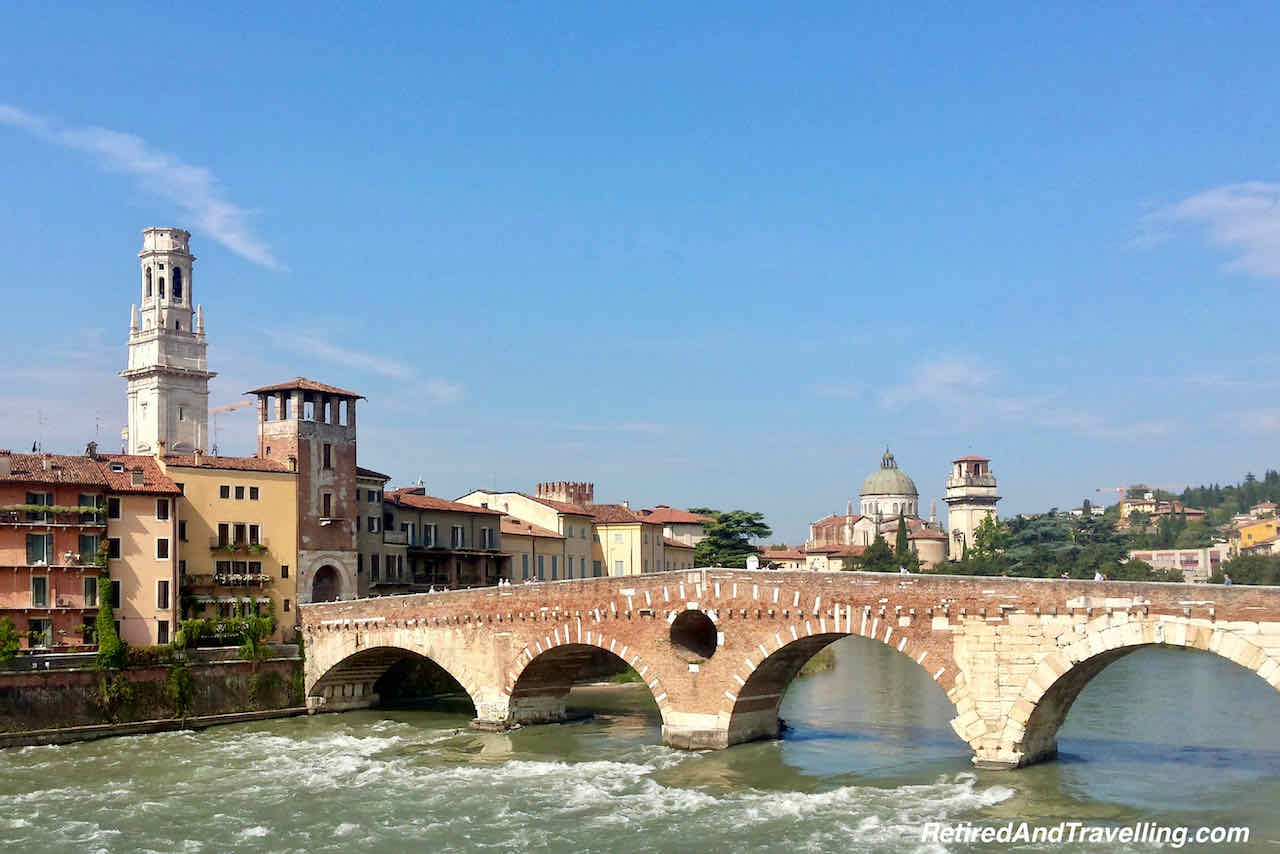 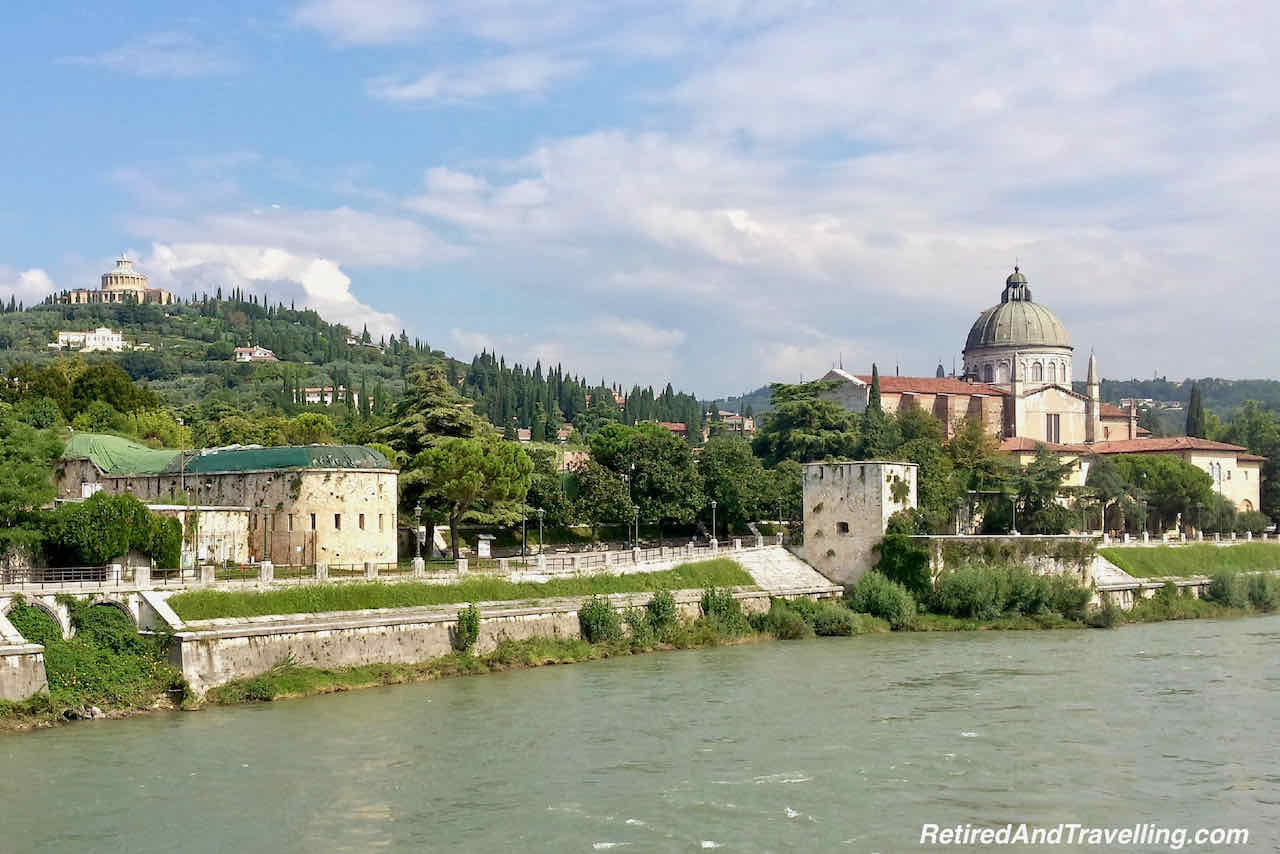 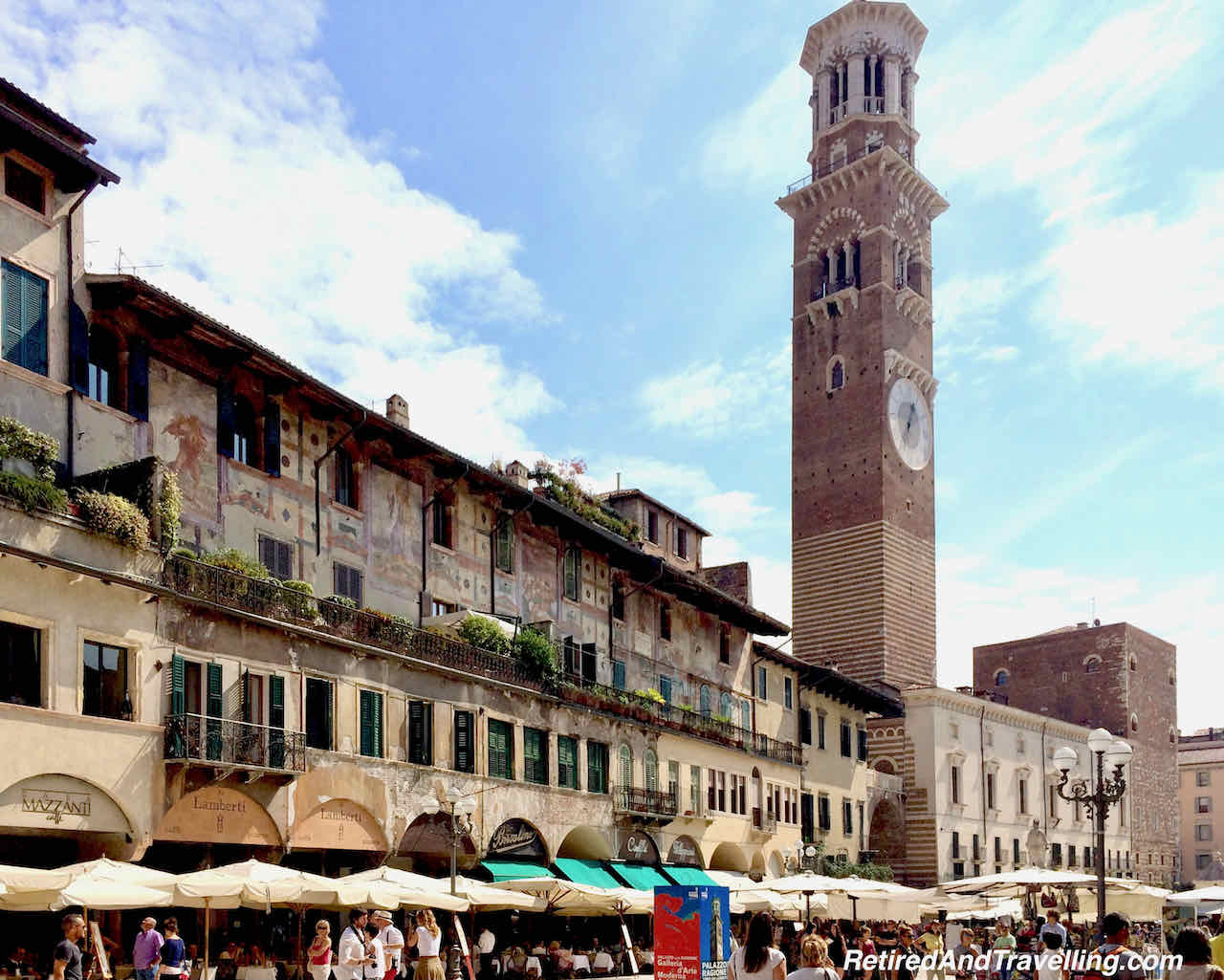 There was one rainy day where we stayed close and spent some time catching up on tweets, blogs and picture editing. On many days we enjoyed day trips or events that were unique to this area.

For a relaxing day we explored the green oasis of the Giardini Guisti.  As we moved higher in the park, we got the most amazing views out over Verona. 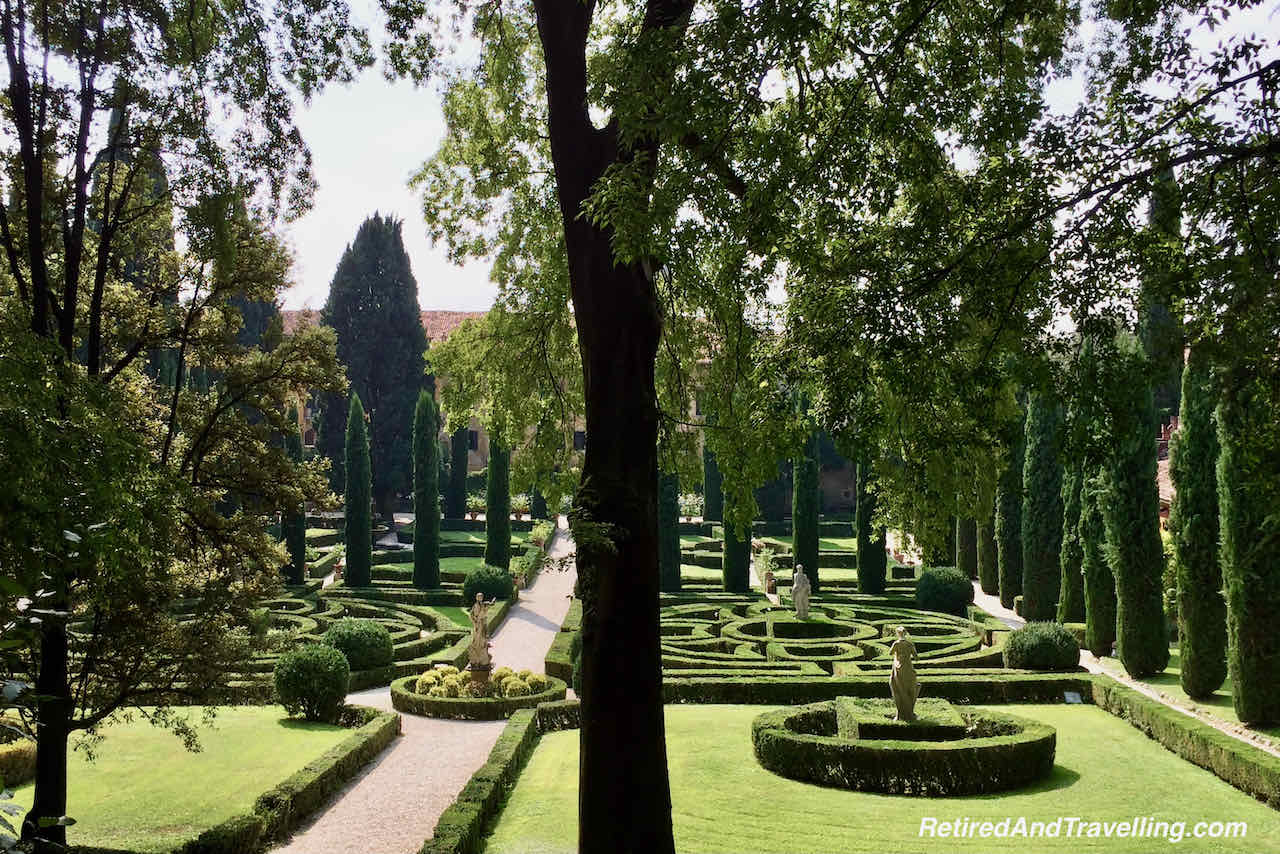 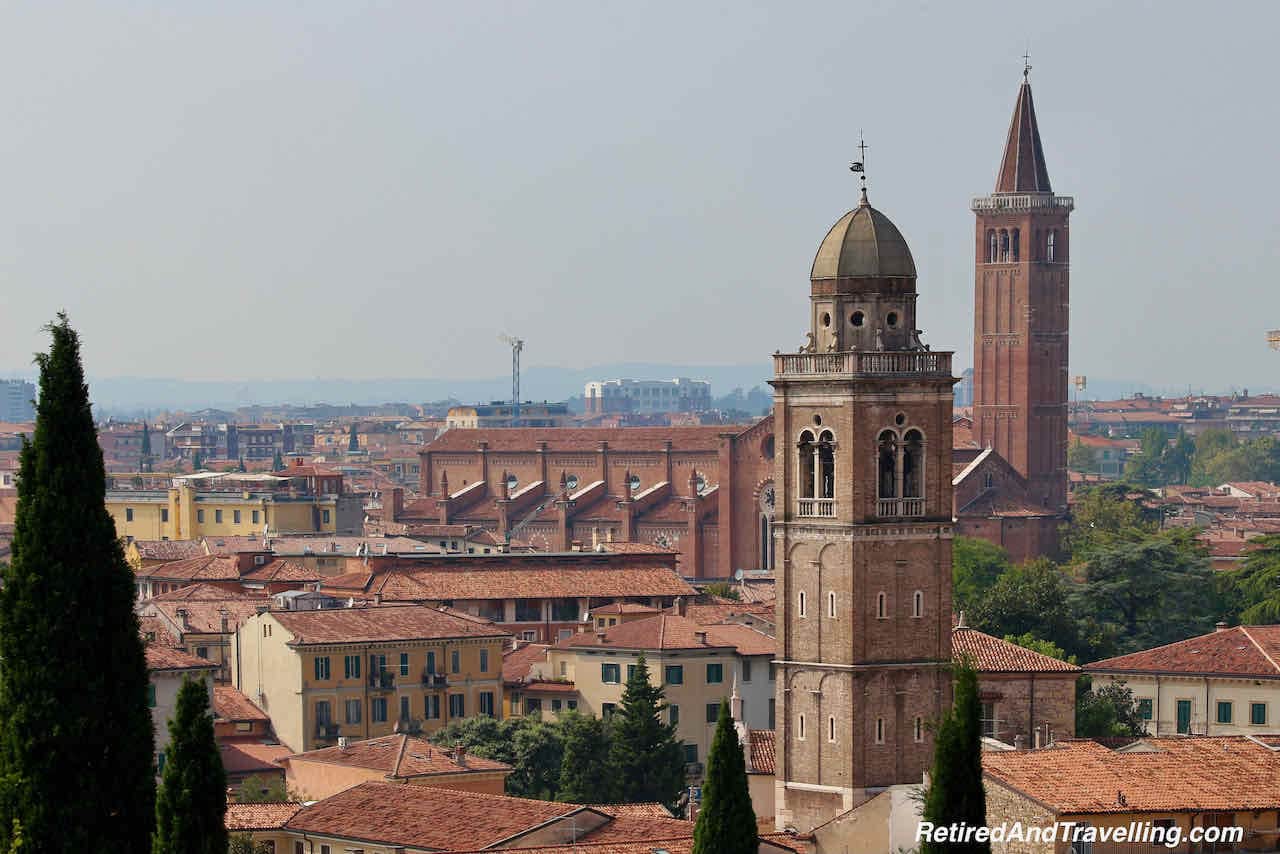 We got tickets for two spectacular shows in the ancient Verona Arena at night under the stars and full moon.  We started with the classic opera Aida.  And then finished with Romeo and Juliet.  What could be a better thing to do in Verona city of lovers? 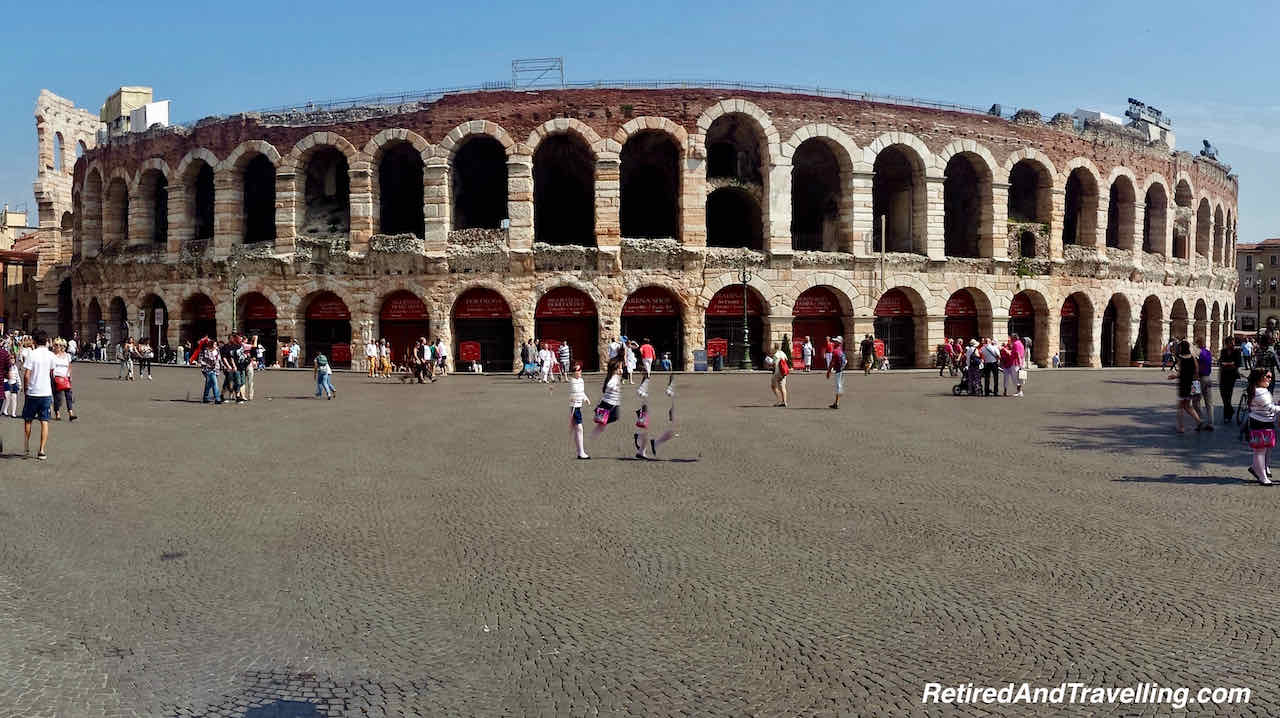 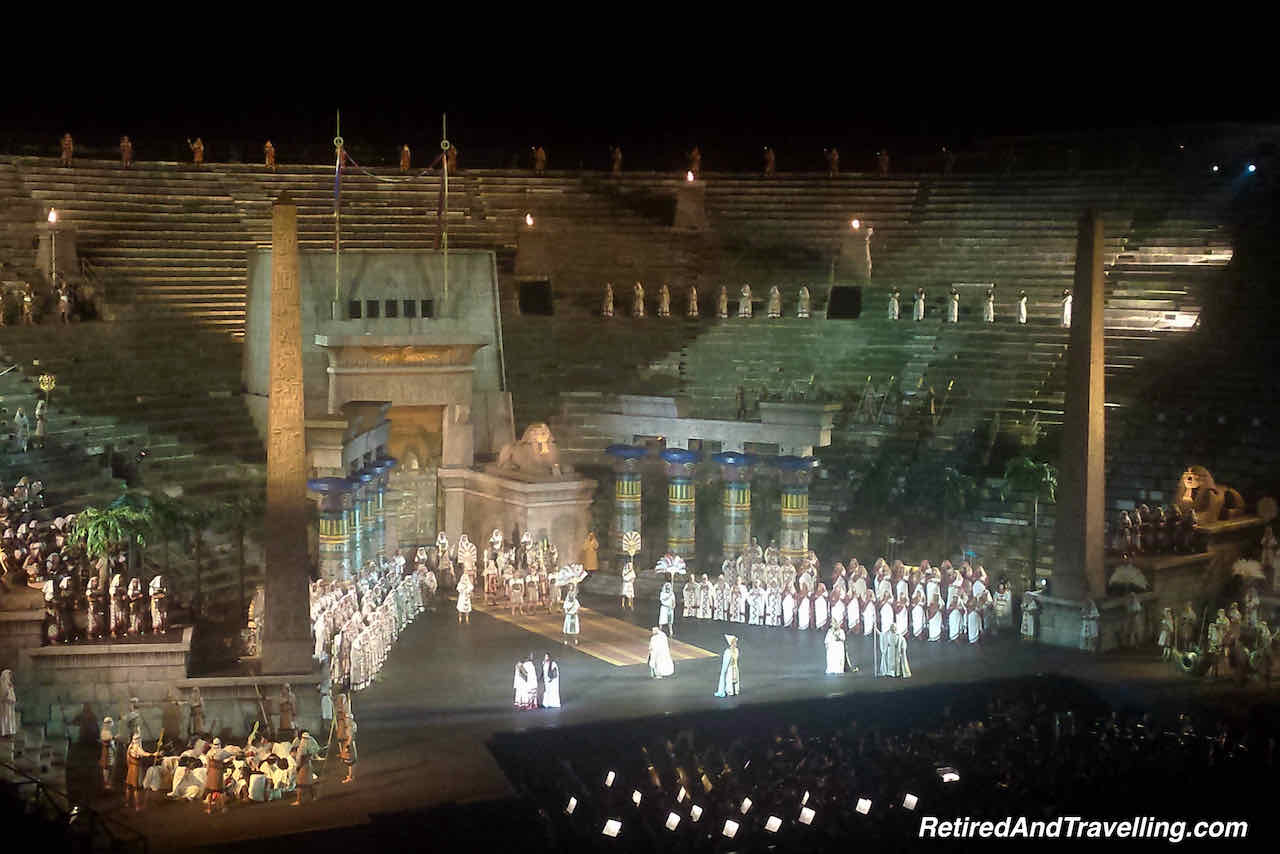 Verona was a great spot to use as a base.  It was easy to take the train out of the city for day trips.

One weekend we took the train to Venice for the Regatta.  We found a restaurant by the canal and enjoyed a lovely day with food, drink and the parade of colourful gondolas. 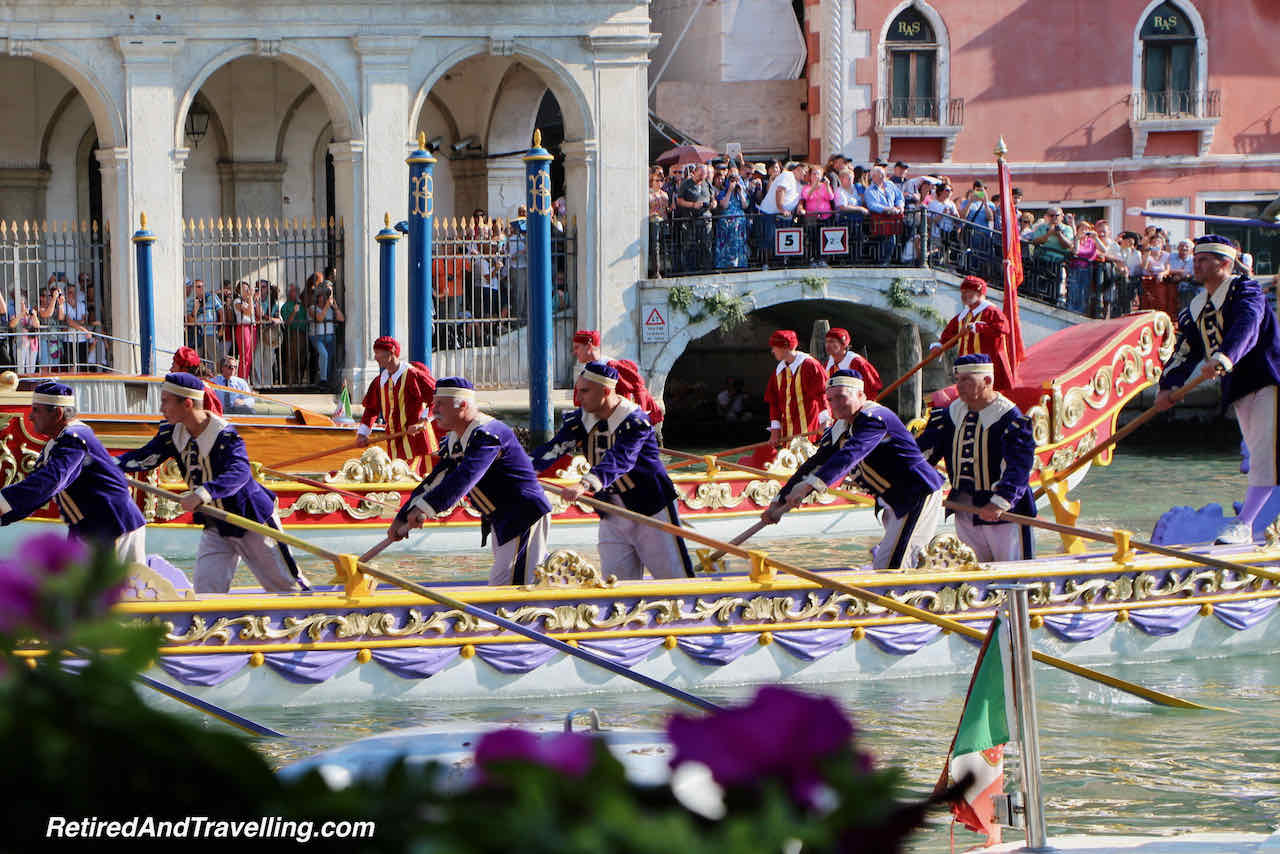 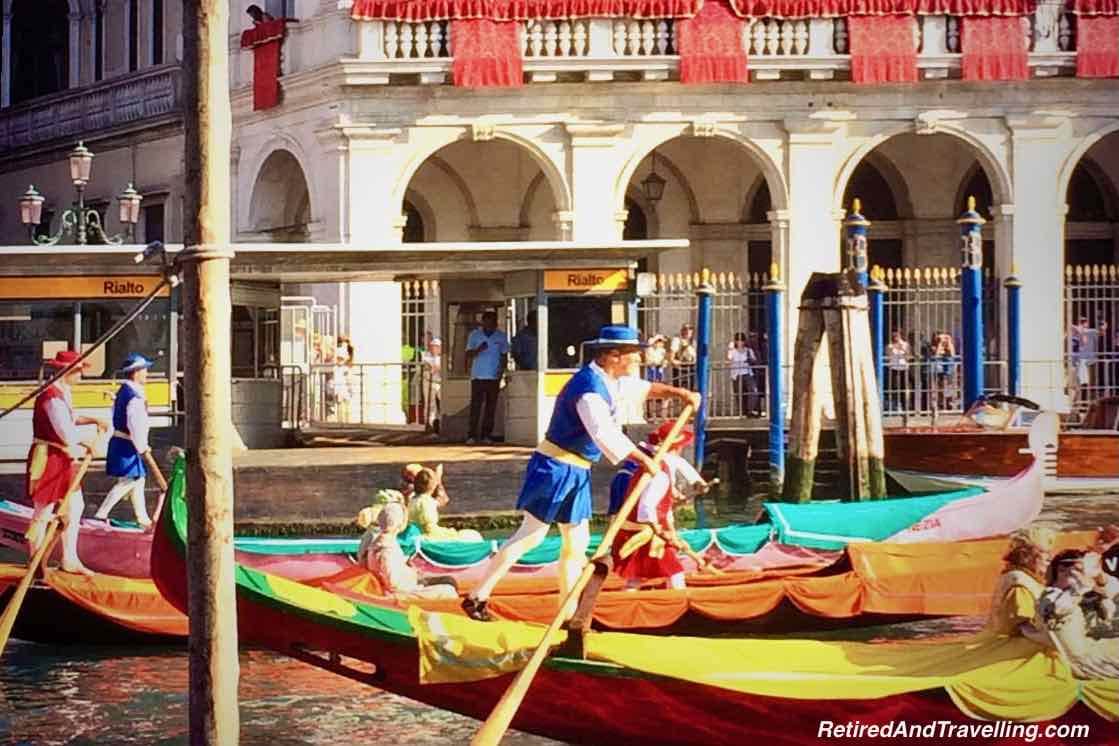 On another day we went to Mantova (Mantua) and saw the Palace Ducale.  It was a day full of beauty and art.  We will definitely visit again to see all that we missed. 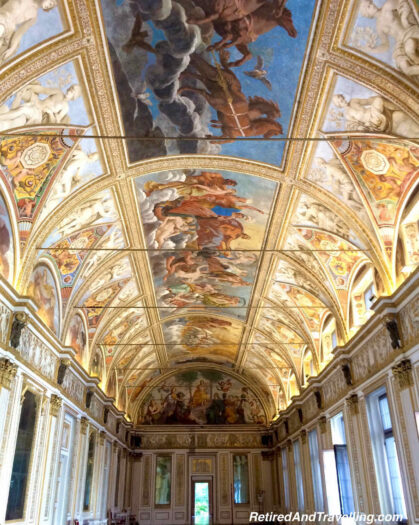 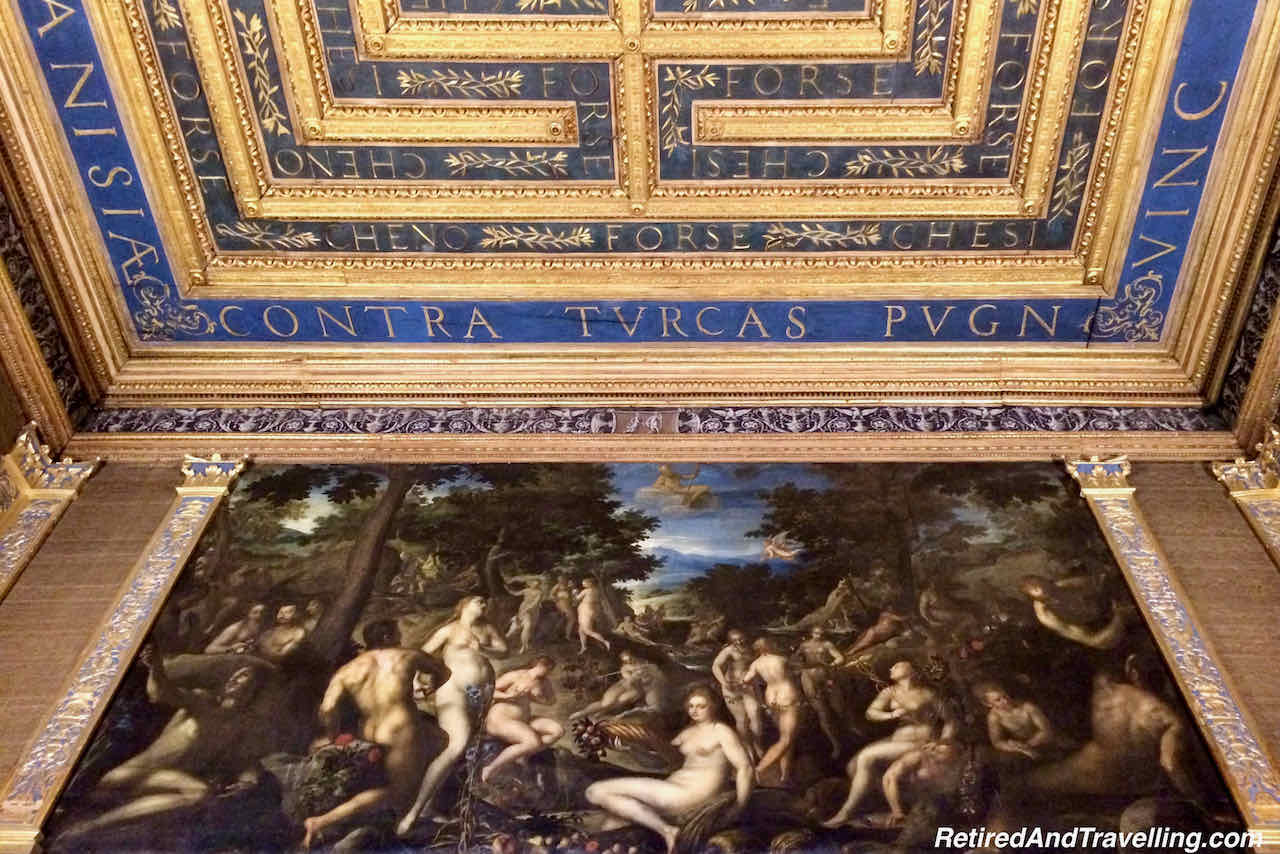 We booked a day tour and saw Sirmione on Lake Garda.  It was great to see the town from the water and on a walk around.  On that same tour, we spent the afternoon at a Lugana winery.  A great way to learn about the wines of this region. 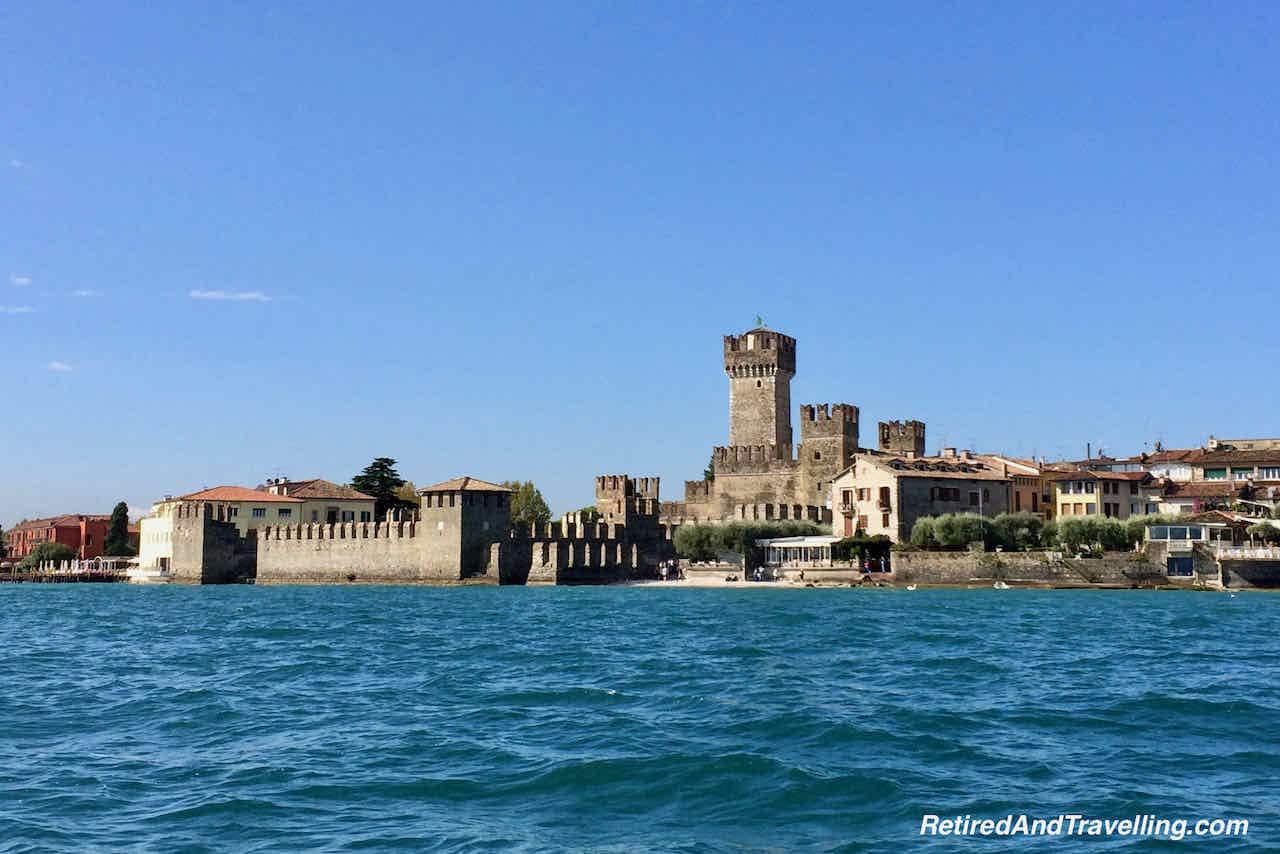 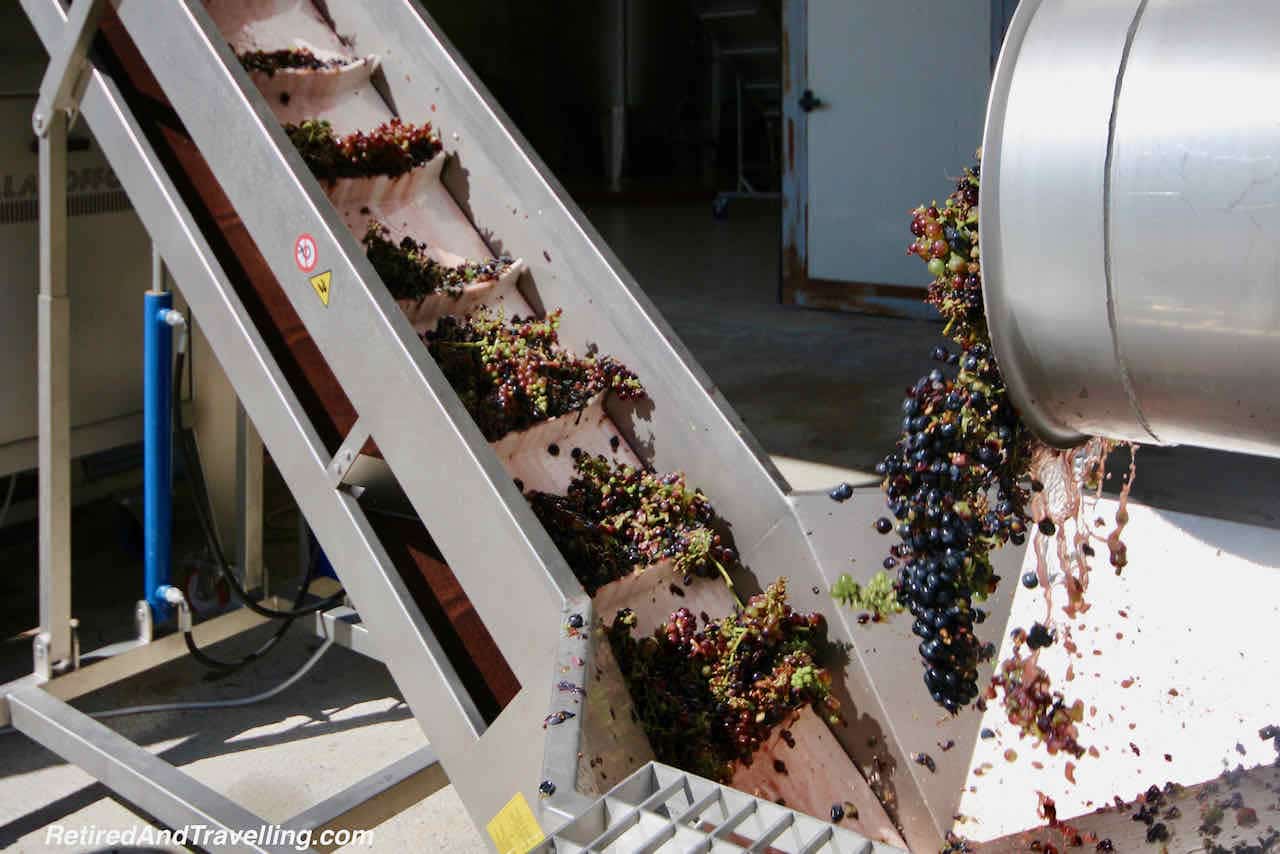 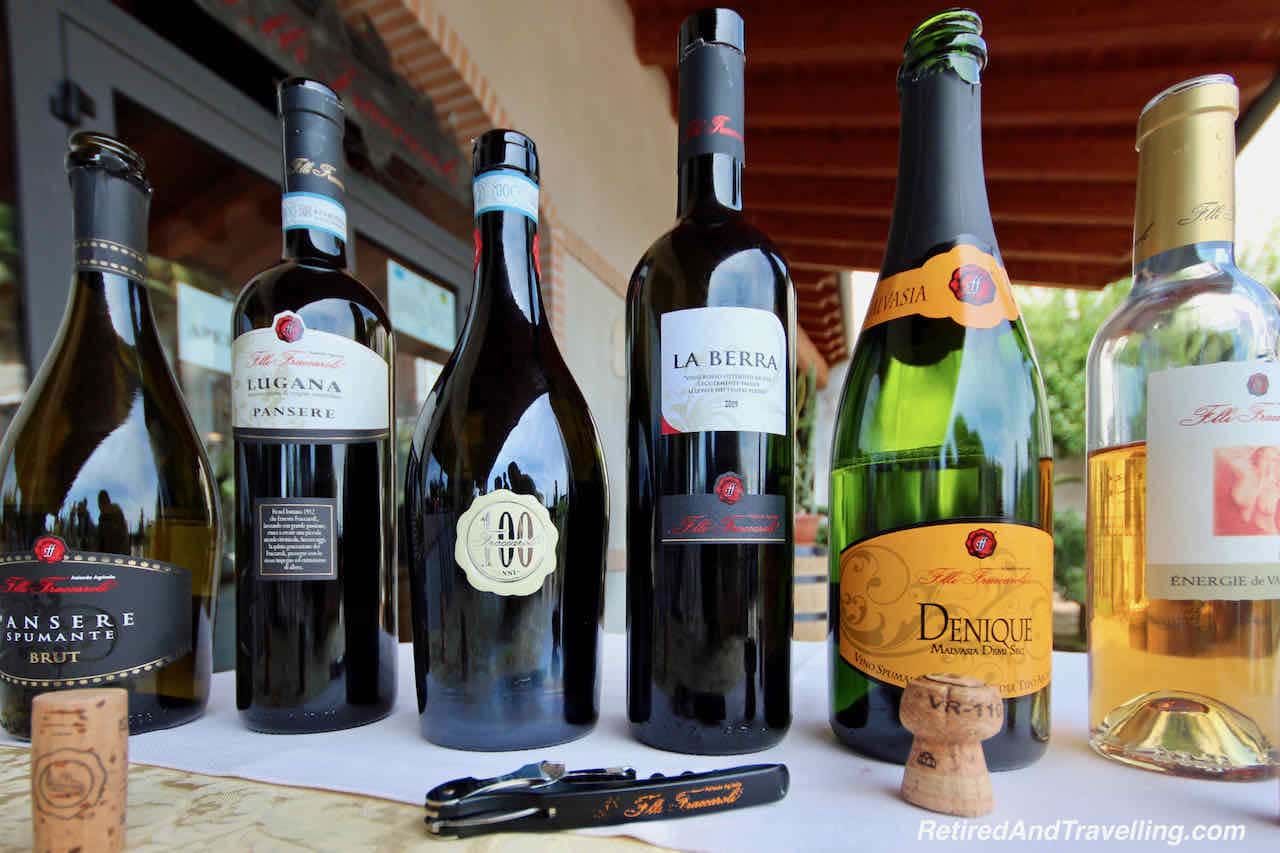 We Ate Well In Verona

Some days we wandered off for morning coffee and tried spots in our ‘hood. While we understood that it was much cheaper to stand at the bar for coffee, most of the time we paid the table price and sat and took our time. 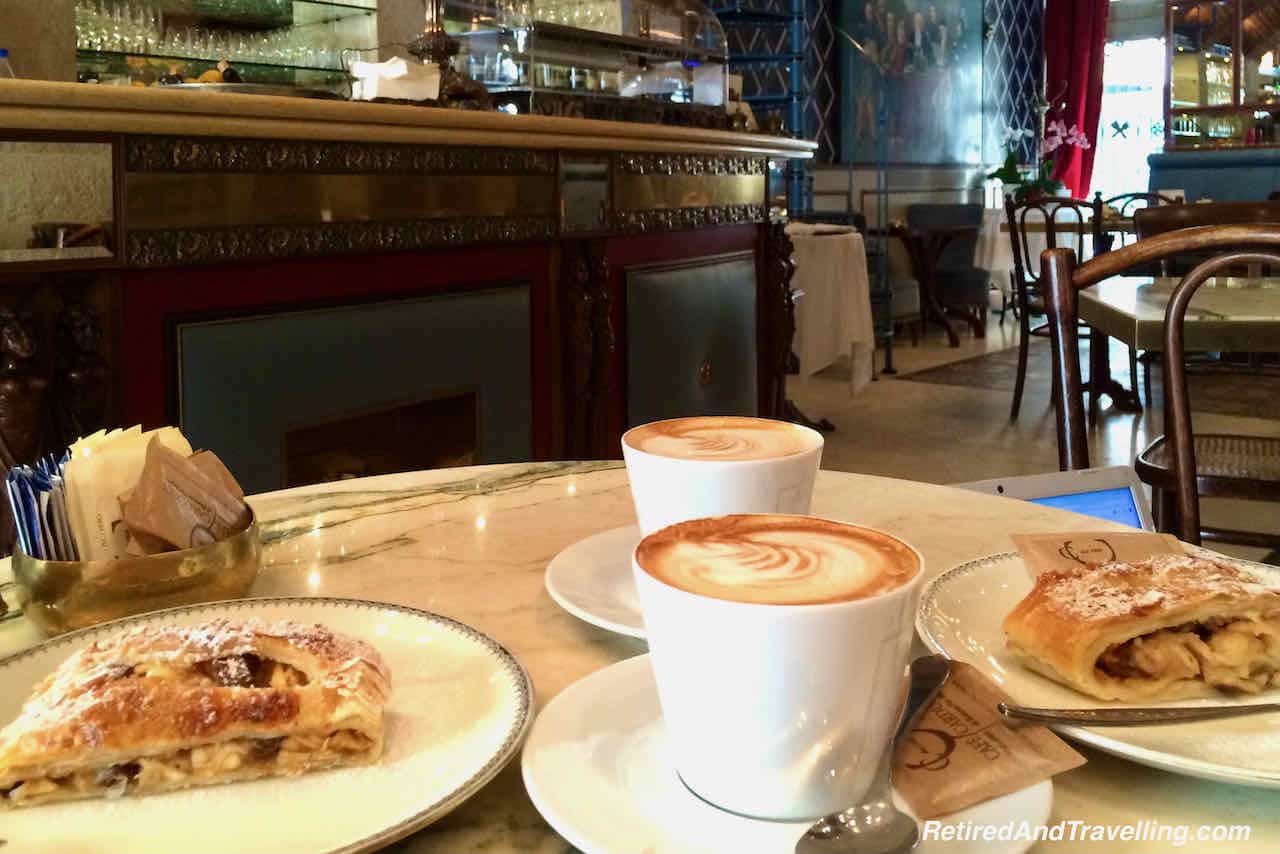 Breakfast came with our B&B so we usually had one big meal out.  And the second meal was either a picnic or something simple like pizza. We had good local shopping for food.  There was fresh fruit and vegetables with meat and cheese in a specialty stop.  And a larger food stores close if we went further across the river.

The region was known for Amarone wine and almost everywhere we went the menu offered Amarone risotto. Verona was not that close to the water so we mostly stayed away from seafood.  Although we were surprised a few times with great mussels.

We were in a great region to support my journey to get David to drink red wine. Amarone was smooth and full bodied. We sampled Volpolicello in all grades – from standard to Superiore to a Ripossa mix. I really liked the Ripossa. We tried white wine on our Lugana wine tour.  Both nudged me a little to more sweet white wines than I previously picked. 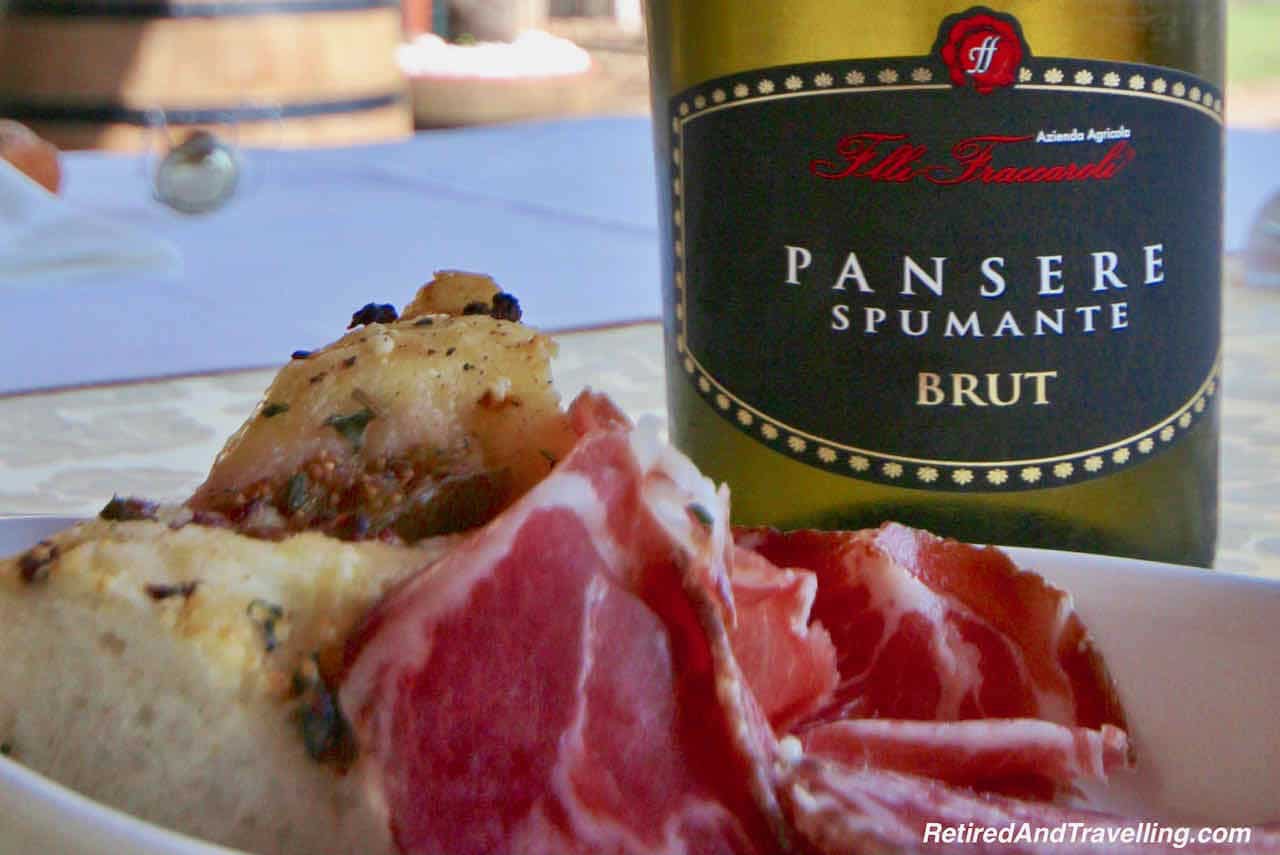 Of course we found lots of authentic gelato. We stayed away from the fluffy mounds and looked for closed stainless steel containers that usually meant home made and fresh.  David became a connoisseur of cioccolato fondante (dark chocolate) while I moved from flavour to flavour.

Our Return to Verona City Of Lovers

Verona City of Lovers remained a town that we would visit again. It was large enough and had lots of things to do. We found a local neighbourhood and got away from the tourist crowds.  We were excited as we headed off to Bologna for our next adventure!

What was your favourite thing about Verona City of Lovers?  Did you take a great day trip we missed? 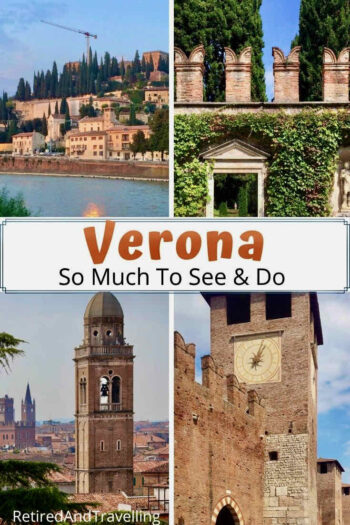 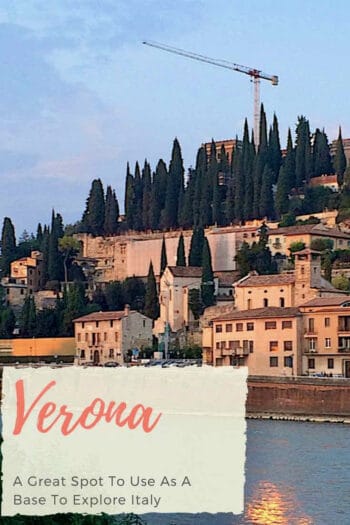 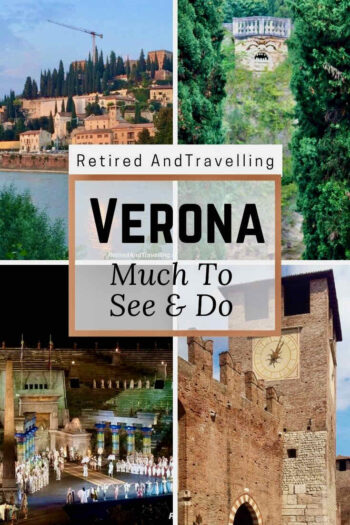