Live Shows In The Verona Arena

When we were planned our 10 weeks in Italy, the only early fixed agenda item was the desire to see Romeo and Juliette in the Verona Arena. My romantic husband made sure we planned around this!

We toured the Verona Arena on a previous visit to Verona and were awed at the thought of seeing a show inside this ancient venue.  This Roman amphitheatre was built in AD 30.  Since that date, only exterior changes were needed from an earthquake in AD 1117 which removed the exterior casing of white and pink limestone. The interior stone shell remained with only the addition of proper seating in the lower levels.

Getting Our Show Tickets For The Verona Arena

We bought our tickets to see Romeo and Juliette online in advance.  This ensured we got good seats. When we booked our tickets, we debated the stone steps, a simple chair or the nicer padded chairs in the lower sections.  We finally splurged for padded chairs. Figuring we wouldn’t understand a word of the Italian dialogue, we wanted to have a great comfortable view of the action. 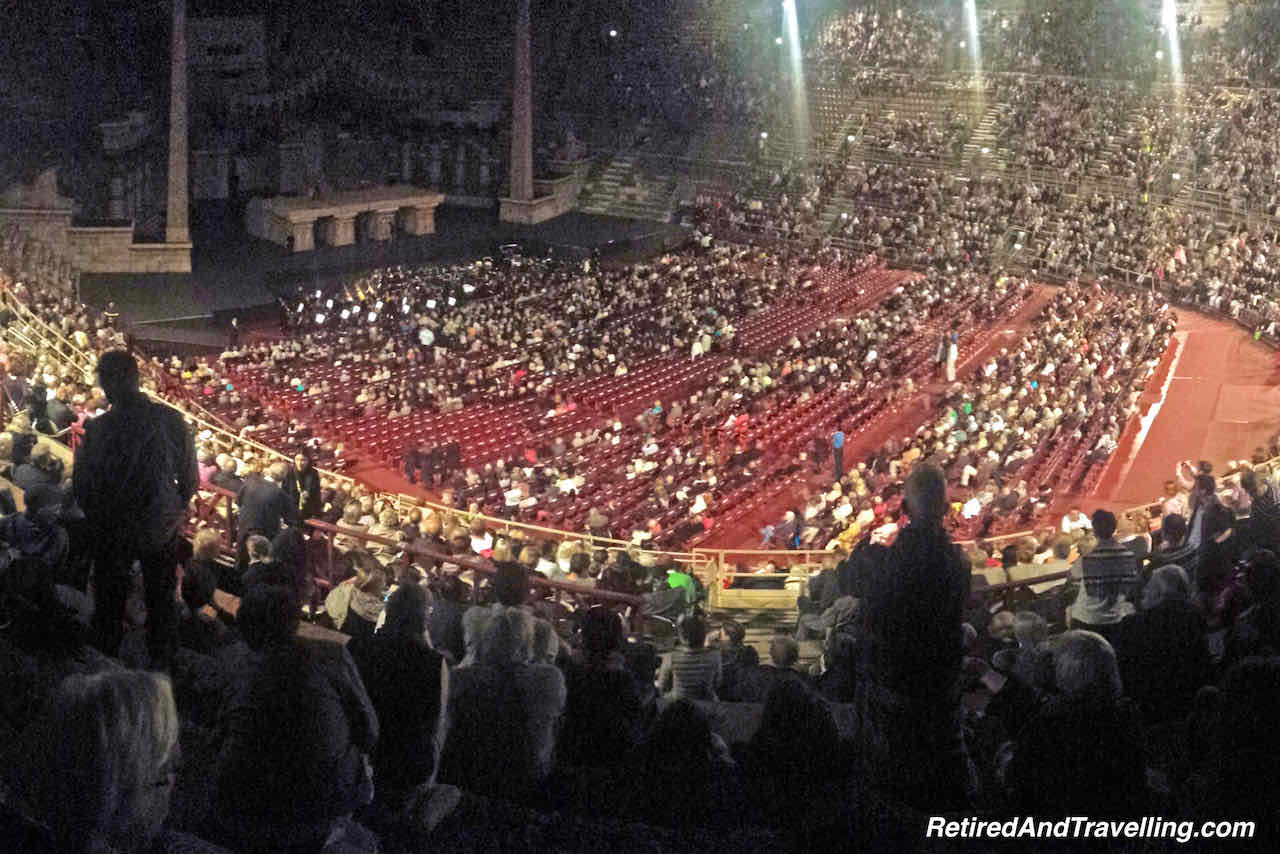 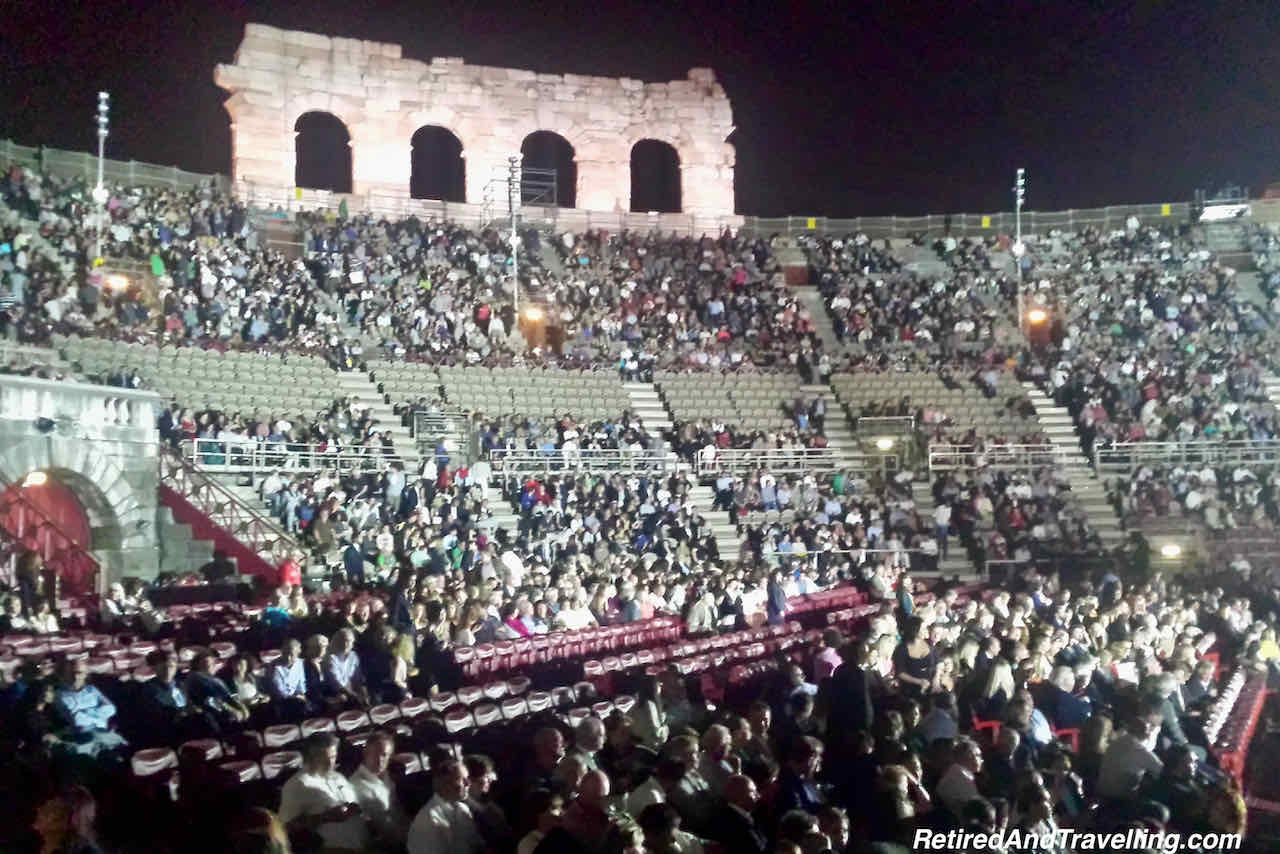 We went to the Verona Arena ticket office to confirm that we only needed the tickets we had printed at home.  Once at the office, we found there were still tickets for that nights’ show of Aida. Romeo and Juliette was an iconic, romantic thing to see in the ancient arena.  But an opera would give us a true acoustic experience. For this show we did not break the bank again when we decided on the stone stairs.

Being occasional martyrs (and cheap ones at that), we didn’t buy, bring or even rent cushions.  We got to use one for the last act when the people beside us departed early and left their cushions behind. The hard stone seats were bearable if we leaned back as many others did.  But we had people right behind us with stretched out their legs. Next time we will select steps that let you lean back.  And cushions will not be optional.

Aida in the Arena Was A Teaser

As the show started, all around the arena the light of candles flickered. This seemed to be a tradition.  The little birthday cake candles were sold on entry. 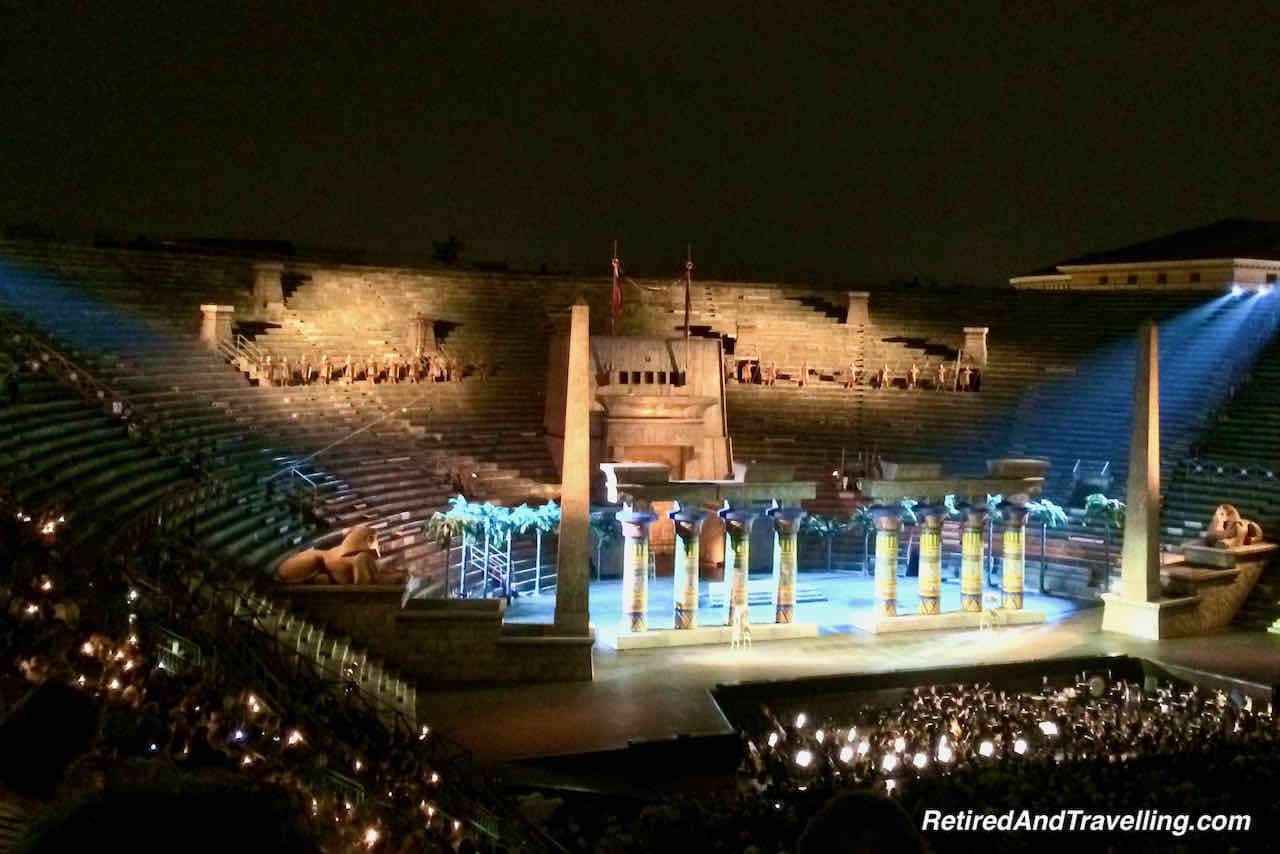 Before the show and during intermission, roving attendants sold souvenirs, water, beer and of course wine. Having had wine with dinner before the show, I passed on more alcohol.  I was sure I would make an even funnier spectacle of myself getting up and down the steep, high stone steps. Trips to the long lines for the ladies bathrooms were always an adventure.

The opera went very late.  It started at almost 9pm and went for 4+ hours in total.  There were 4 acts, 3 full intermissions and two short breaks for scenery changes. We hung in right to the end because I assured David that there was a spectacular ending.  But it turned out that Act 2 was the big act with horses and a wonderful ballet scene. 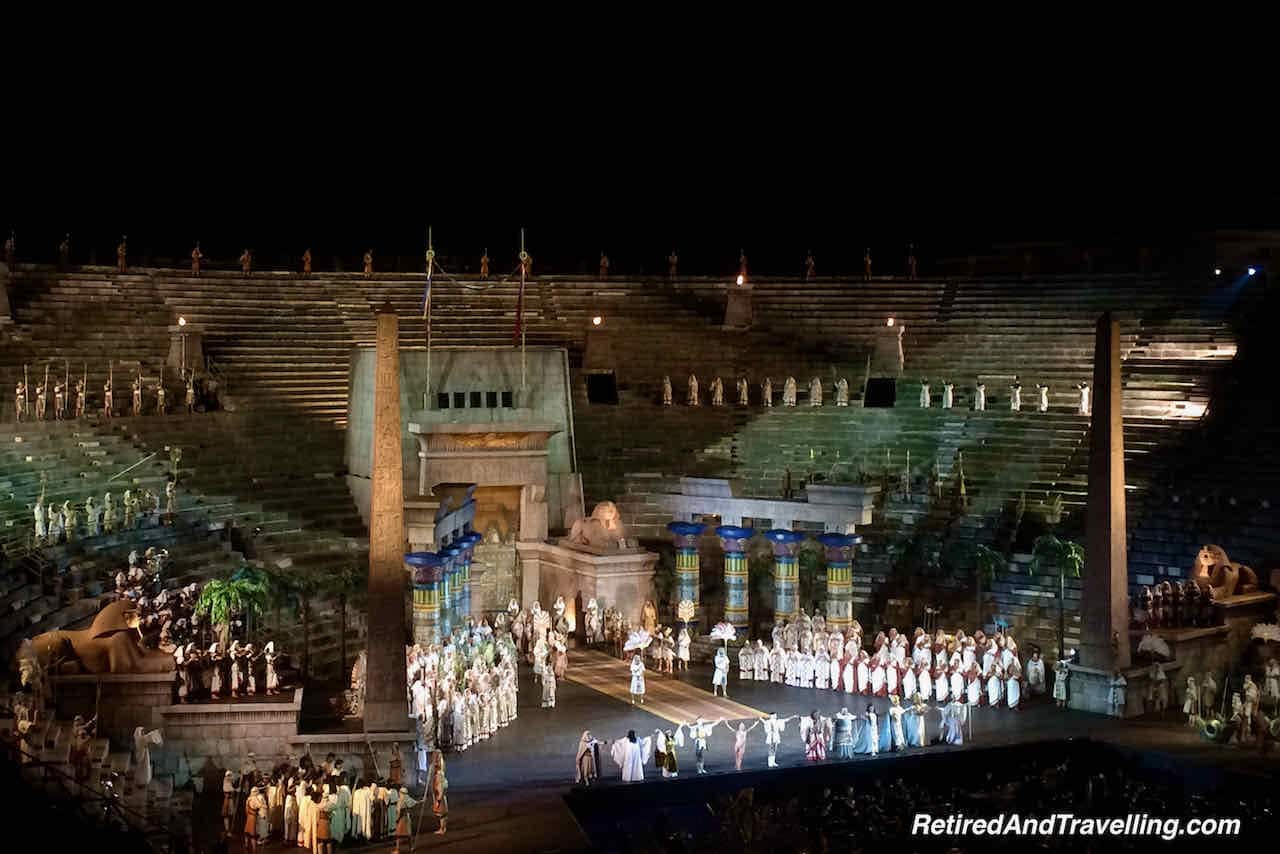 This was our first outdoor opera ever so we had no basis for comparison,. But the voices were strong and filled with the emotion of the story. Even though the music was all in Italian, we easily caught the major drift of the story.

The arena acoustics were great, especially for a place built in AD 30 with NO sound system. Even up in the nosebleed section the sound carried well. The sight lines were great from all seats. It was amazing to see the interesting use of minimal scenery that signified changes in location.

Romeo and Juliette in the Verona Arena

We returned for our second night and saw Romeo and Juliette. Having paid a lot for “good” seats (over $400 Canadian after all fees), we were a bit disappointed when we finally settled into our seat.

We chose to be not on the floor, so got a good view.  But the seats were not angled towards the front.  So the spacing was cramped and we needed to sit sorta sideways in our seats. There was a nominal cushion on the seat and seat back, although the butt cushion was not much better than we could have rented. Some smart people added cushions. Luckily I had got an aisle seat so I stretched out a bit. The biggest advantage was the seat back.  But we could have sat in cheaper seats 2 rows back and got seat backs and bought cushions. All things to remember for a return visit!

The Aida sets were all replaced by a large scaffold-type set that rotated in multiple ways for different settings.

Could It Be Any More Romantic To Watch Romeo and Juliette Under The Stars?

In general the set was minimal except for the strange use of moving scenery or props.  There was a car with wings that brought the Montague clan to the ball.  And this car gratuitously spouted fire at one point. Juliette’s balcony was housed in a shiny metal tower.  And the friars church had a similar shiny metal bejewelled ball. 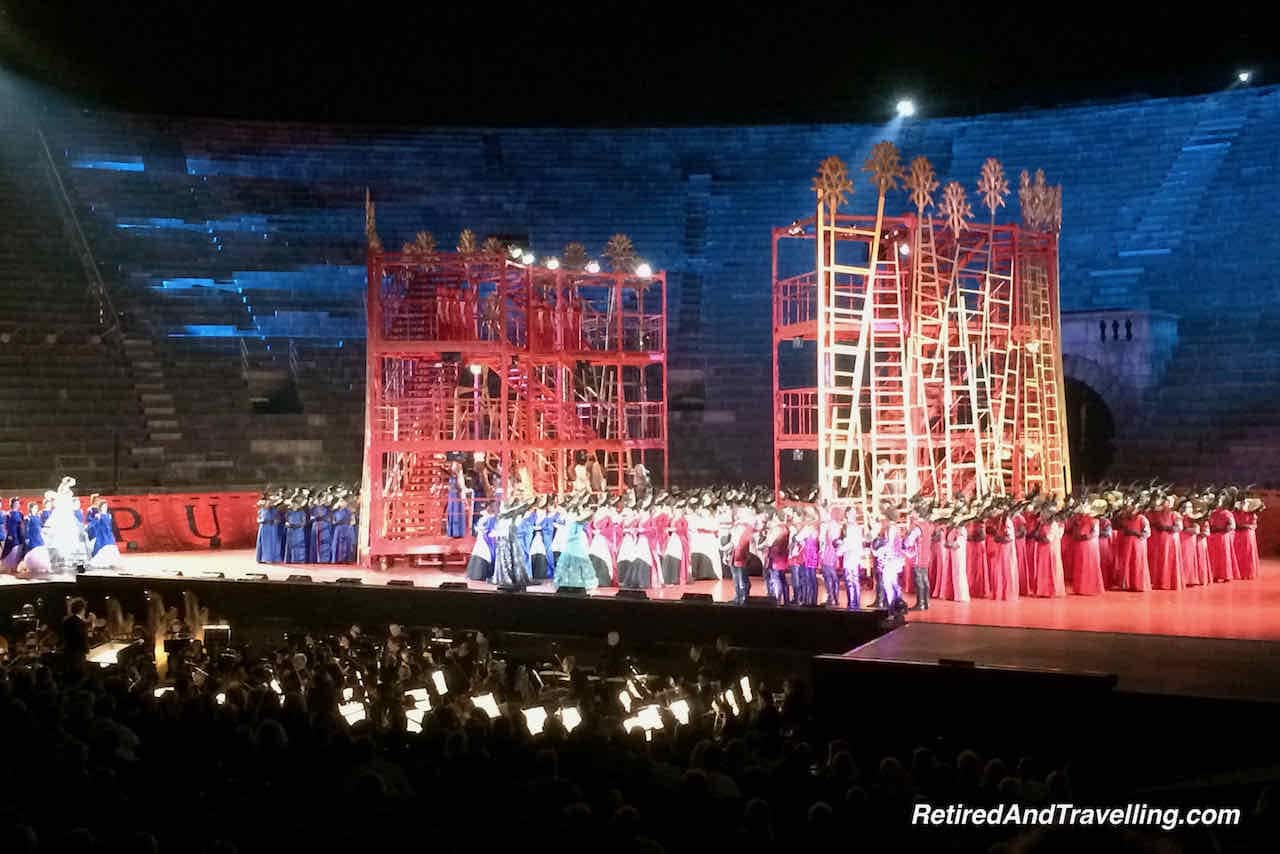 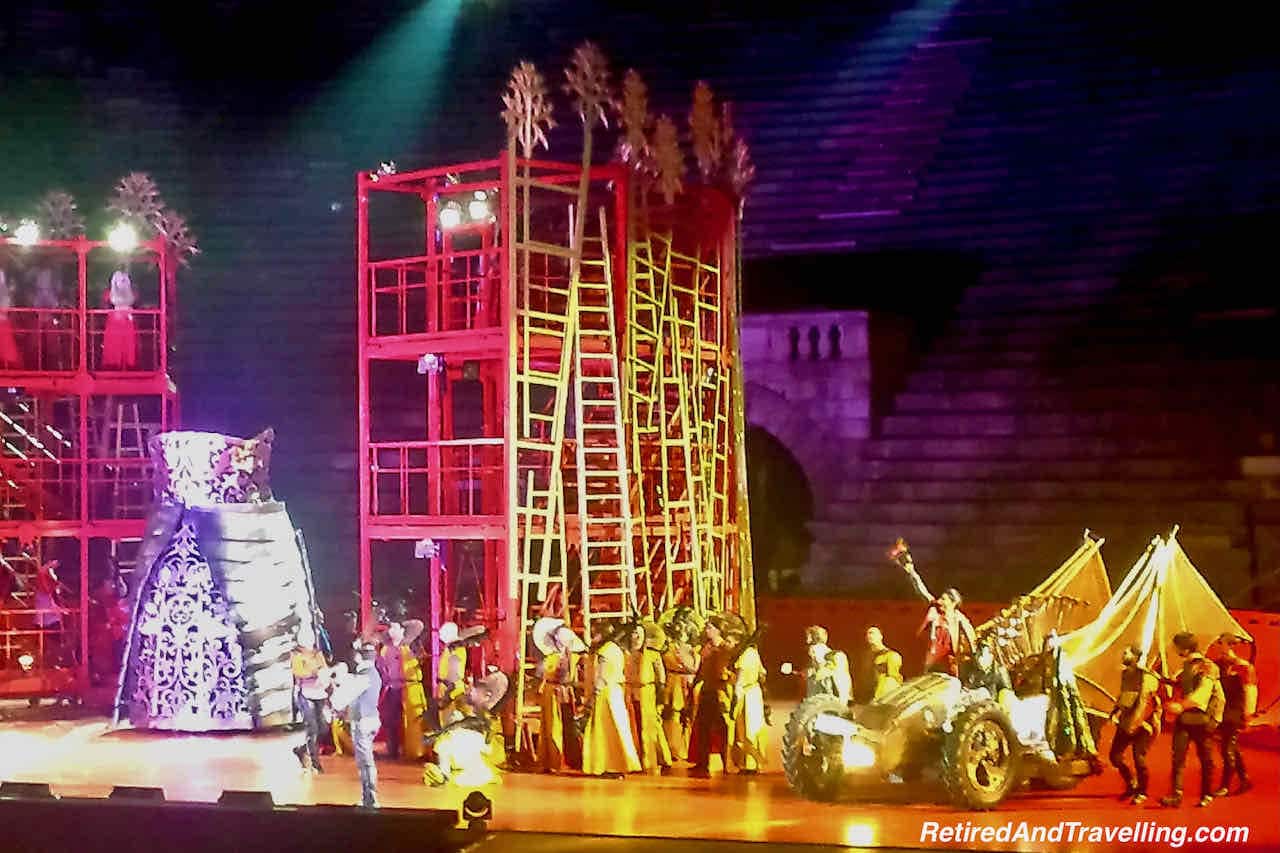 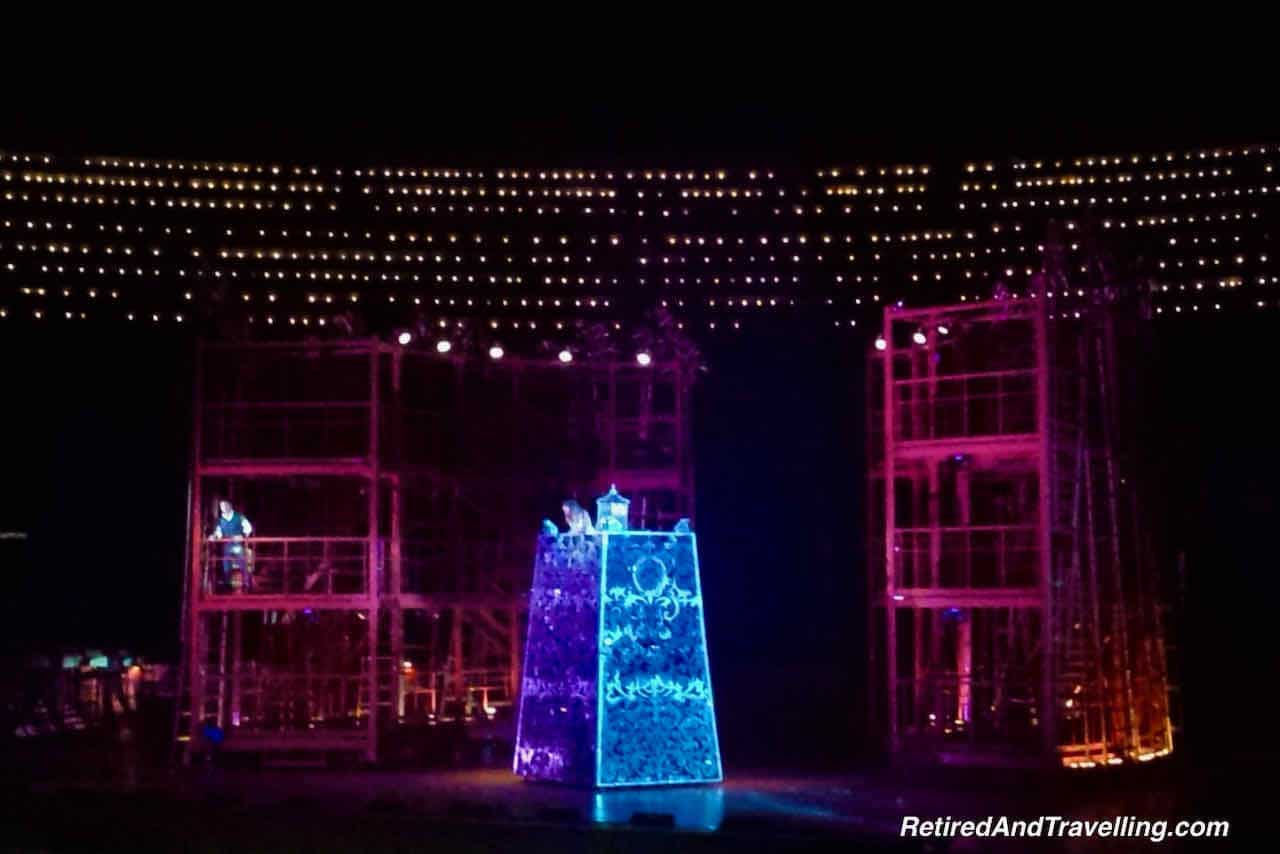 Costumes were generally period design.  The colours distinguished the feuding families.  The shiny metal skirts for Juliette were a bit odd.  There was one for the ball and a two storey dress as her wedding gown.

The show was all done in song or sing song opera all in French. I caught a word or two and David understood a little more.  So I mostly let the sound wash over me. Having refreshed myself with the plot lines for each of the 5 acts, I followed along. There were two 20 minute intermissions.  So it was midnight before we fought the crowd out. In general the singing voices were ok.  But Juliette was fantastic with a strong, full range.

Great Spectaculars In The Verona Arena

Seeing both an opera and then Romeo and Juliette in the Verona Arena was an indulgent splurge.  It was a great way to begin our 10 weeks in Italy. I would probably never pay for good seats again.  But I would consider seats in the upper stone balcony under the stars – if I got the right seat that let me lean back and got cushions.  It might not make me an opera lover but it would be a great way to taste test occasionally.

Have you been to the Verona Arena to see a show?  Which show?  What seats would you recommend? 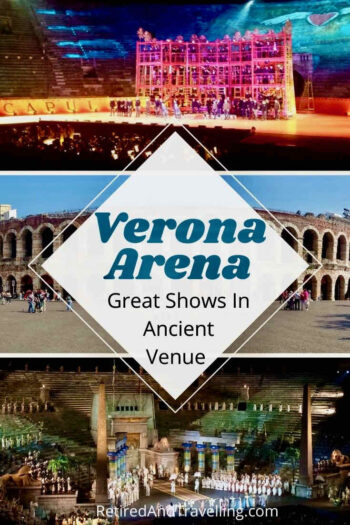 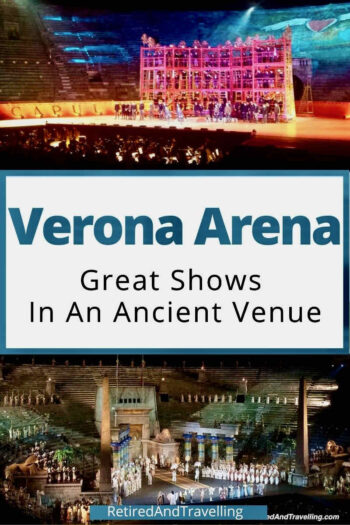