We visited the white hill town of Ostuni in the morning and then headed along little twisty turny country roads towards the enchanting trulli houses in Alberobello. This was the most well known and touristic town that showcased a whole village of little Trulli houses.

So what is trulli house? In the southern region of Puglia we found a whole region that teamed with enchanting trulli houses.  They sported the characteristic domed or conical roofs.  This was a prehistoric building method still used today. The enchanting trulli houses were made of limestone boulders collected from the local fields.  They were put together with mortarless construction. While new houses were sometimes built to resemble this, the region still had a large number of Trulli houses built in the historic way.

Our First View Of Trulli Houses

As we drove along the country roads we saw our first trulli house and got all excited. David turned around and we got a picture.

Pulling over several times, to the honking of locals, we continued to see old authentic trulli houses.  There were also newer houses built in that style with similar domed structures. Everywhere we looked as we took this windy hill road we saw trulli houses near and far. 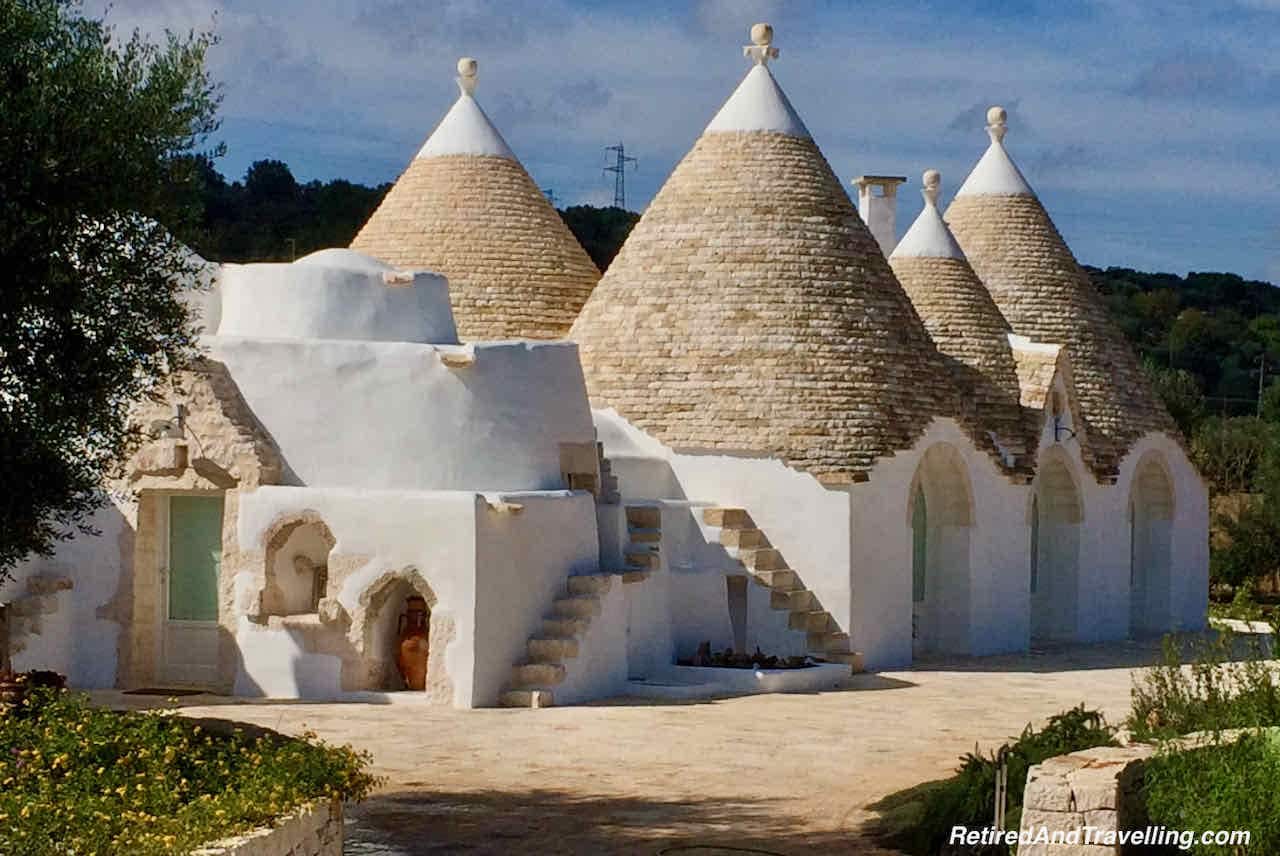 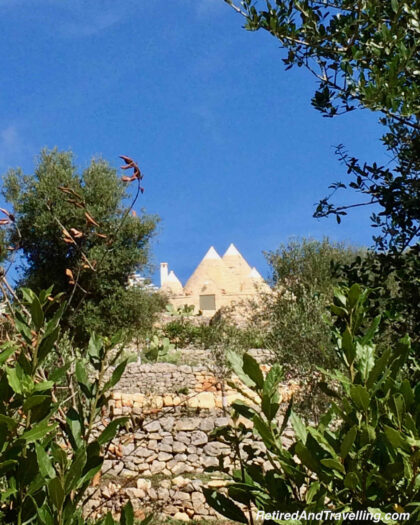 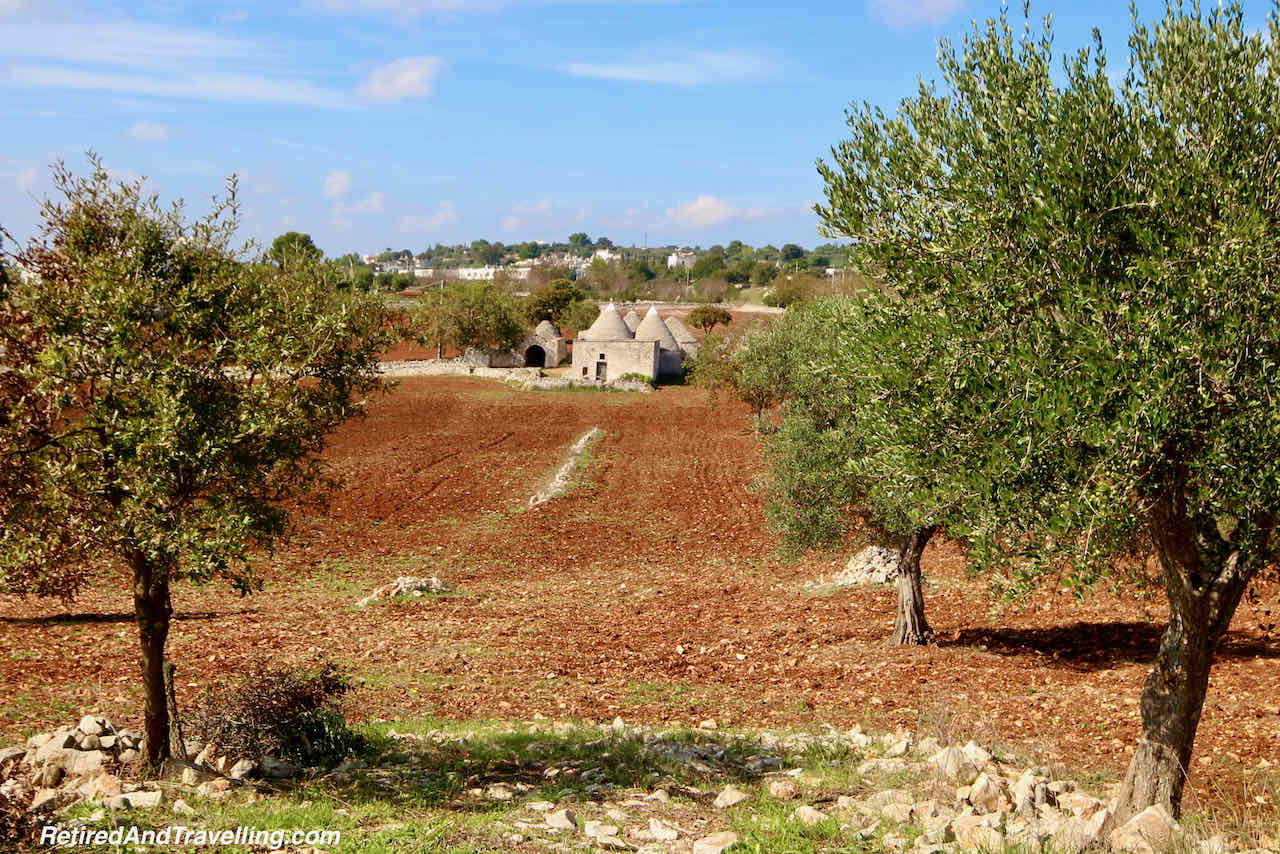 We were so glad we plotted the scenic route. This was one of the advantages when we rented a car in both Abruzzo and Puglia. A train or bus might get us to a central tourist spot.  But we would be more limited in wandering outside of the town boundaries.  But we were sure glad we took a GPS and our offline map app.  The the twisty turny hill roads could lead us anywhere!

See The Unesco Town of Alberobello For More Trulli Houses

When we finally reached Alberobello, we found trulli houses everywhere we looked. It was an enchanting little town.  In October with little tourist traffic, we enjoyed the town without crowds. 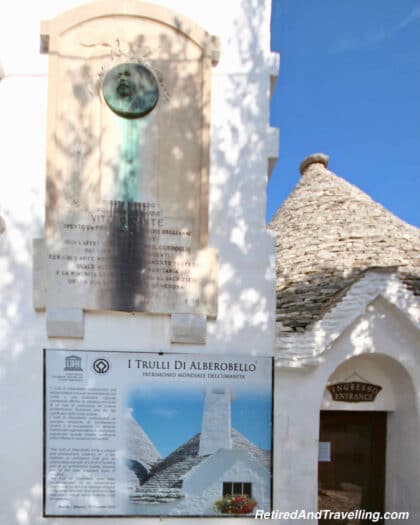 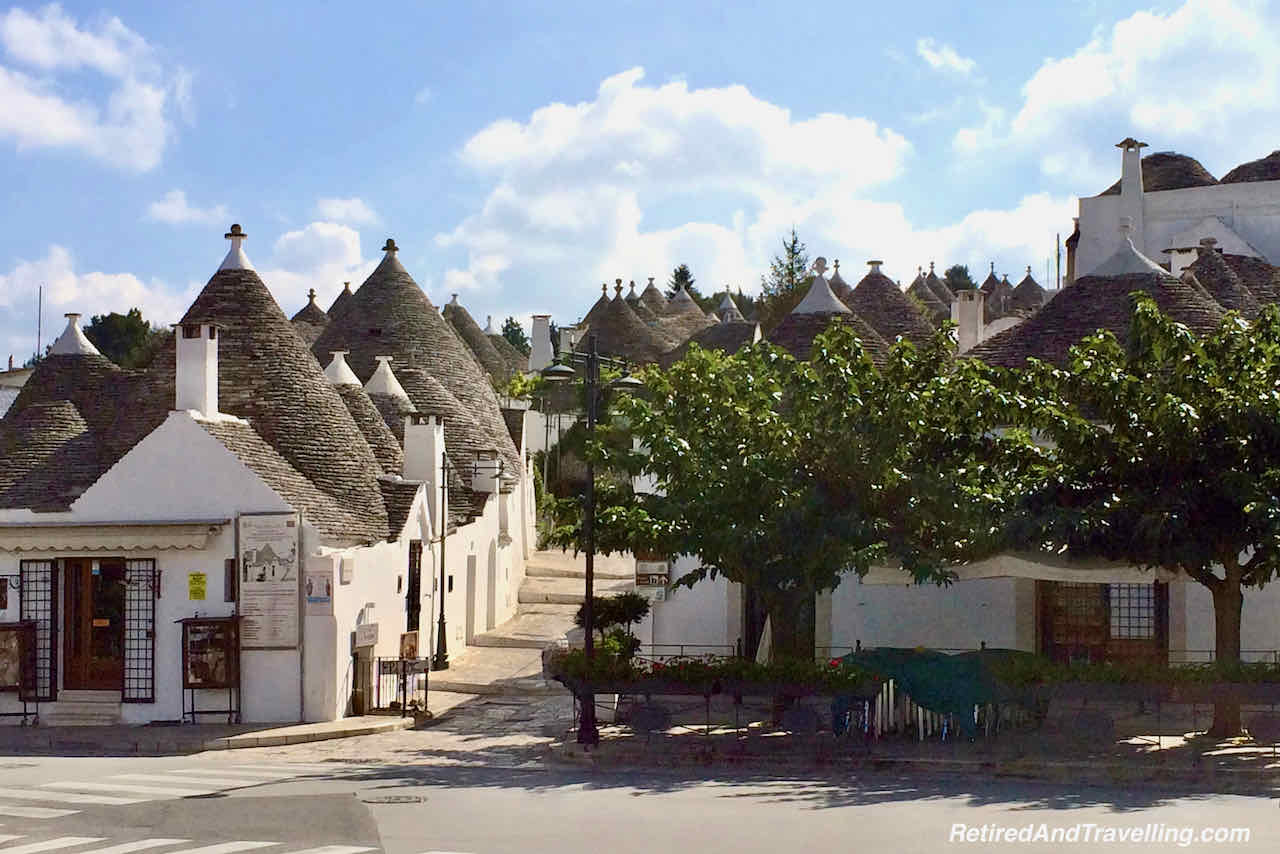 By now it was way past lunch so we grabbed the first restaurant we found. We were surprised when we found excellent seafood not right on the coast. But we probably would have had a more unique and trulli experience had we wandered up the hill and found a restaurant in a trulli house. A good reminder to keep the protein bars in our day pack to stave off urgent hunger!

After eating, we headed up to the viewpoint and walked amongst the trulli houses. We never really found a panoramic point.  But saw lots of trulli houses and construction close up. 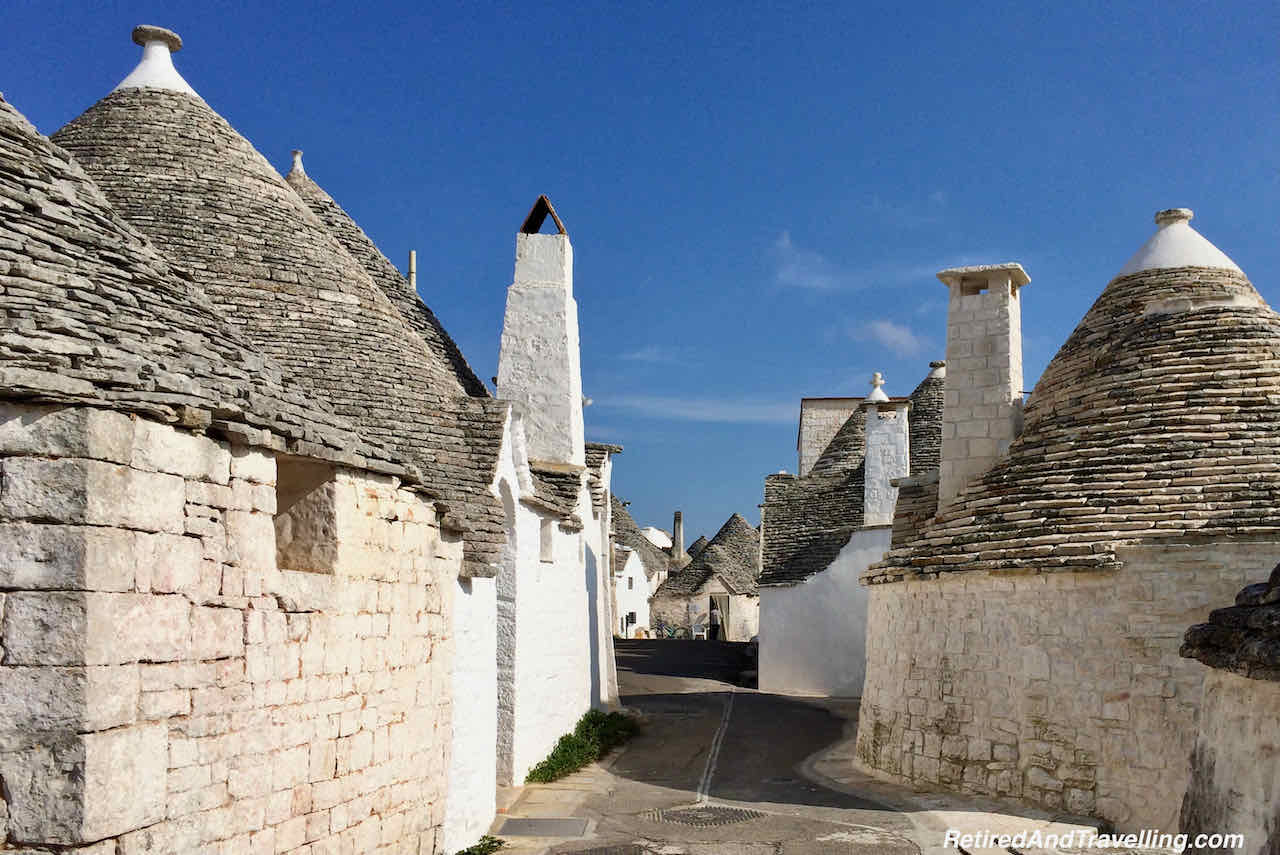 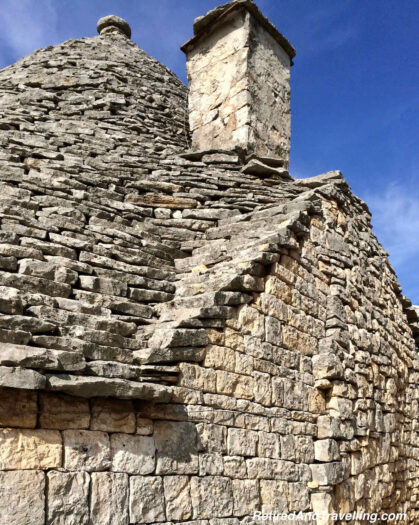 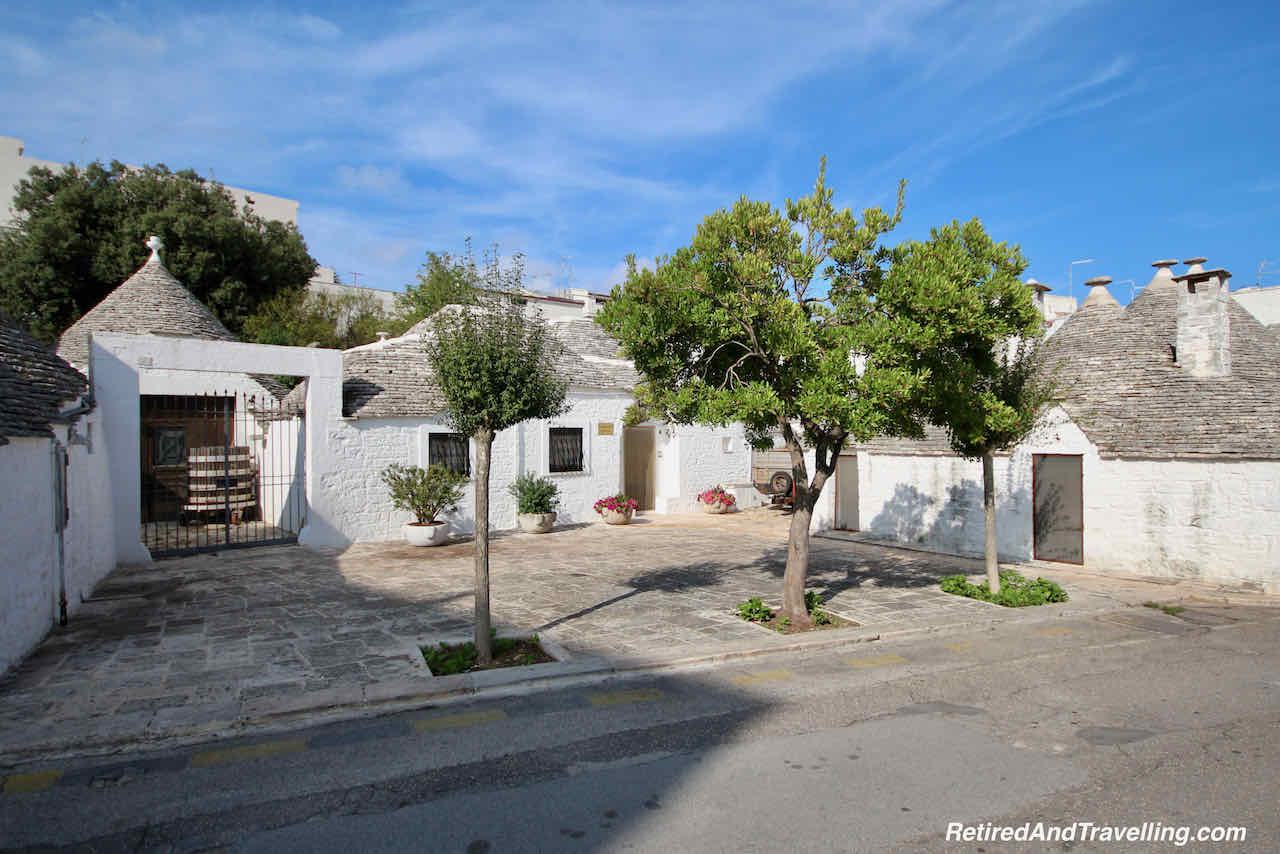 At one point David and I got separated and wandered down different paths back to the car park. This gave us a chance to see a little more than the small area around the main parking lot. David found the main piazza before he found me again. Good thing he had pictures to share! I was not heading back up the hill again that day after having climbed Ostuni in the morning! 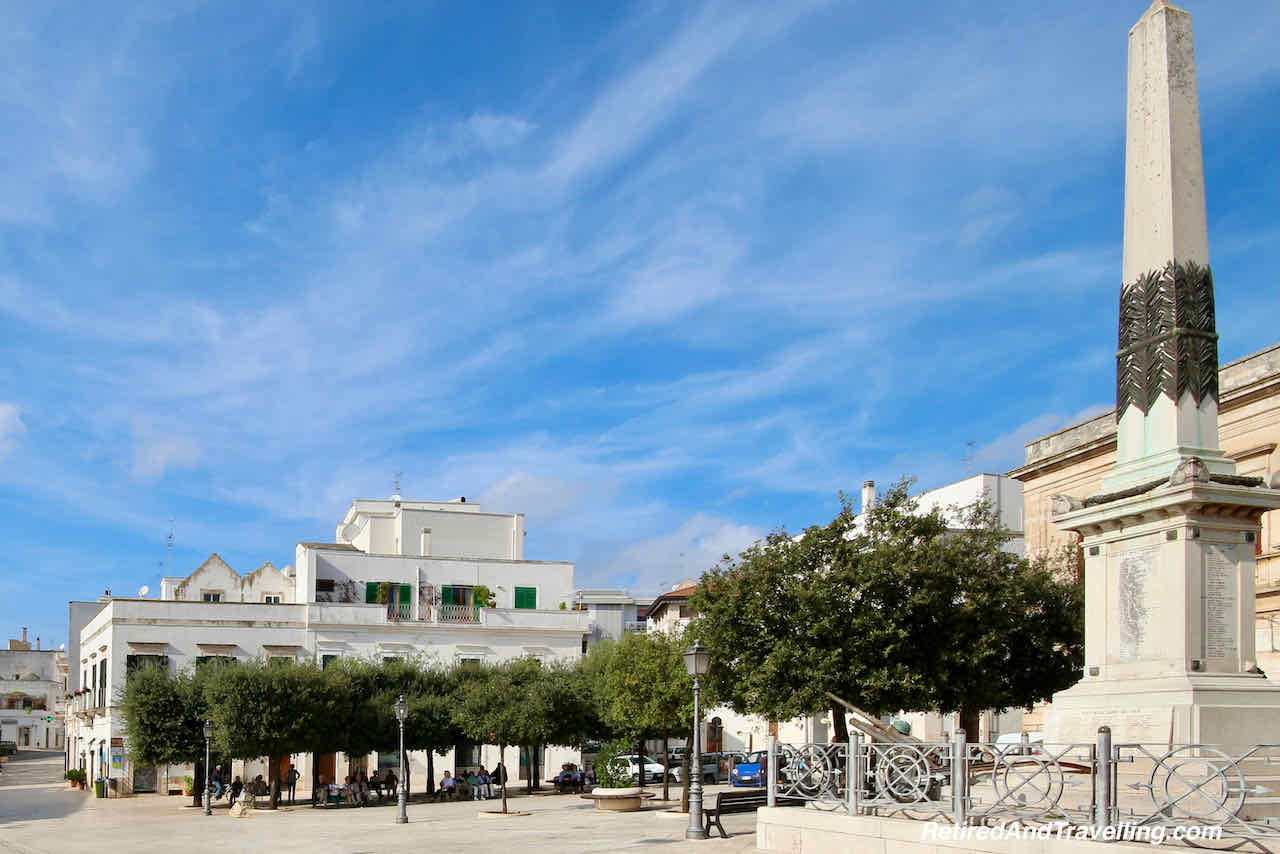 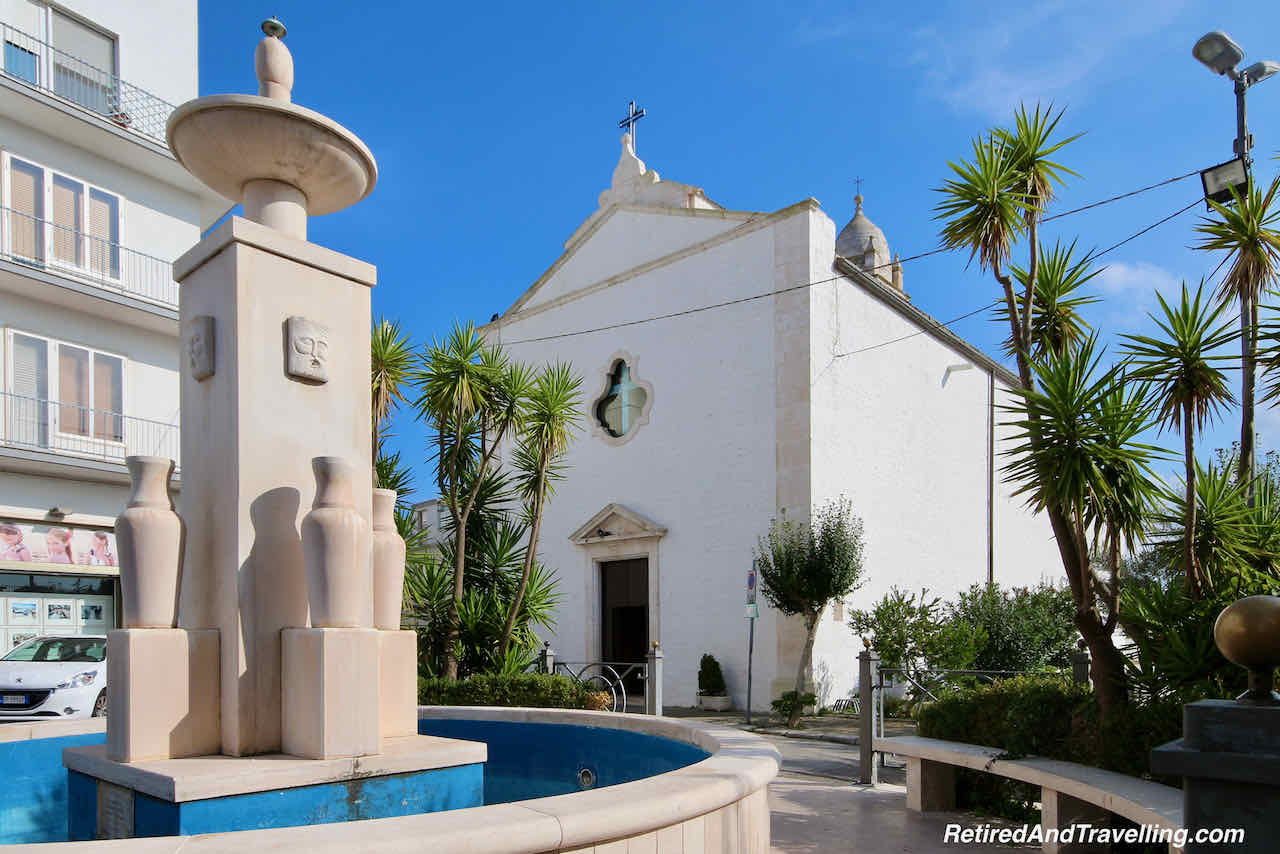 We left the area and headed down the twisty roads.  Along the way we saw more trulli houses nestled in the olive trees within the plots neatly separated by low rock walls. Winding our way back down from the hills we saw the Adriatic Ocean sparkling blue in the distance. 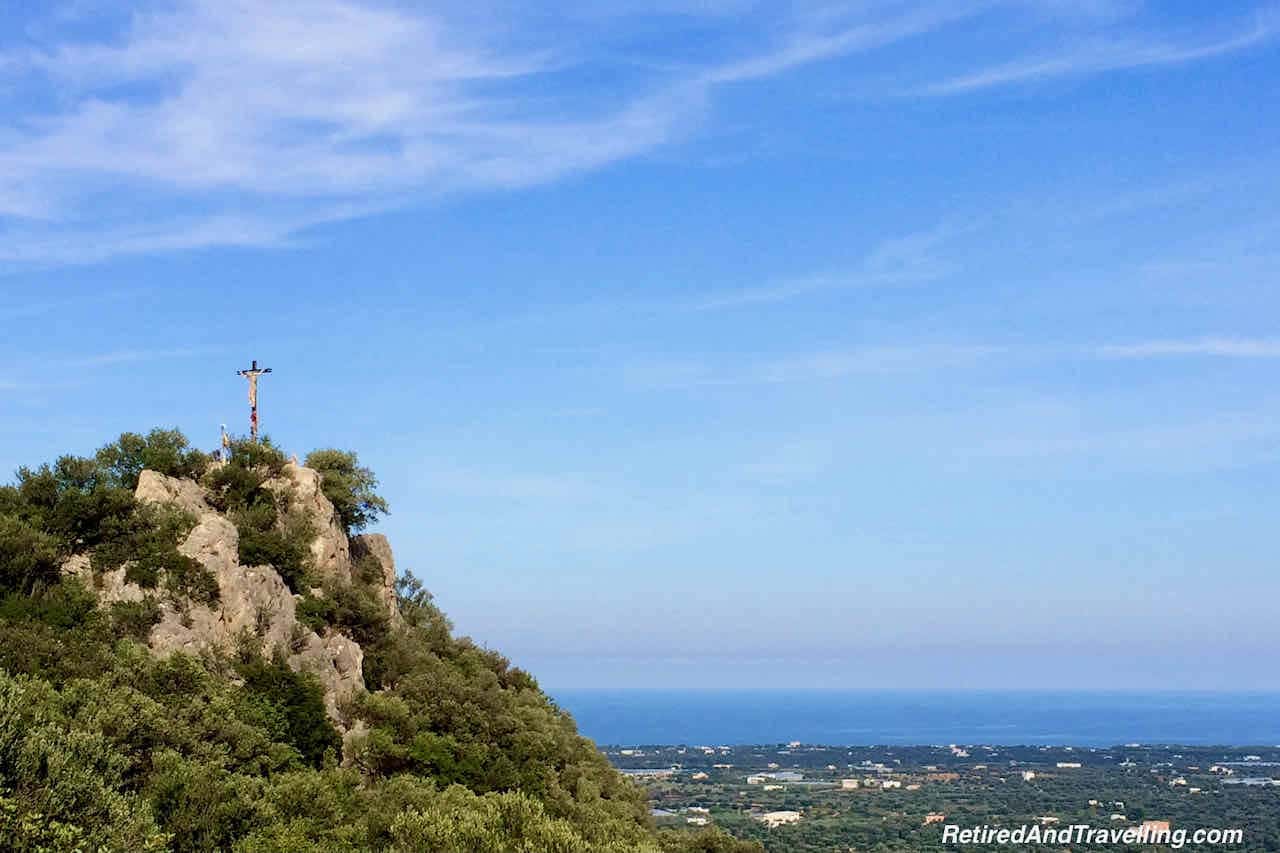 It was a busy day in Puglia.  We went from Lecce, to Ostuni, to Alberobello and then back along the coast.  But we never found a sandy beach for sunset. The trulli houses are a “must do” when you are in this area.  But if possible, wander the countryside as well as Alberobello. We were truly enchanted!

We couldn’t wait to figure out what we were doing in Puglia the next day!

Were you enchanted by the trull houses?  Did you get a chance to see them “in the wild”? 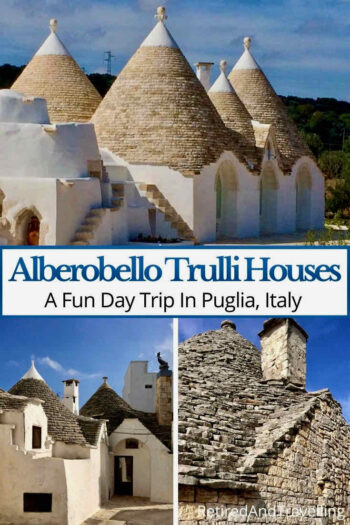 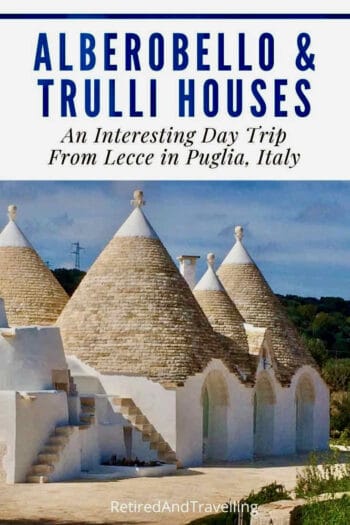 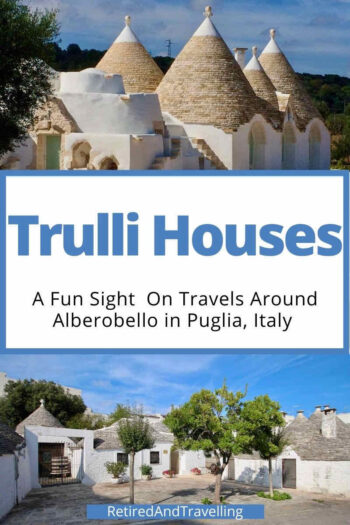