Enjoy The Amalfi Coast By Boat

During our 3 week stay in Sorrento in late October we planned to tour the Amalfi Coast by boat. We wanted to re-visit our favourite seafood restaurant in the marina in Praiano.  And we thought that a trip by private boat might be an interesting option.

We unfortunately left this to later in our stay.  So we didn’t get quite the trip we had envisioned.  But it was great to explore the Amalfi Coast by boat!

Options For Renting A Boat In Sorrento

There were a a couple of options for renting a small boat from Sorrento.  There were boat rentals in the main Marina Picolo in Sorrento.  Or we could rent at the marinas on either side of Sorrento in Sant’ Anna, Piano di Sorrento or in Meta. Since we left it so late, we figured we would try the busier main marina.

The boat rental companies tried to sell us a boat and a skipper.  But with 25 years in the navy (most of it as a Diving Officer), David would be as good or better than anyone they might offer. We price shopped at two spots.  But both had the same price – 150€ for the day plus gas. Later we f0und out that both booths were really the same company and same boats.

Our gas for the day was about 85€.  That was right about what they had said it would be.

Not The Perfect Boating Day

For most of our stay, the seas were quite calm.  But unfortunately on the day the boat was available, the sea and winds were a bit higher. I didn’t doubt David’s ability to pilot the boat.  But he was worried how bouncy the ride would be.

The winds gusted to about 20 knots (the speed at which whitecaps started to form).  But we were assured that the winds would be quieter when we got around the point on the Positano and Amalfi side. We vacillated for 30 minutes about going or cancelling and finally decided we wanted the experience.

David did the paperwork while they gassed up our 5.4m rhib (rigid hulled inflatable boat). They had asked about David’s boating experience when we first inquired about renting.  But all they required when we rented was one piece of ID.  And they did not even took a credit card. Not sure that was normal practice.  But it couldn’t have been easier for us.

The boat was brought to the main dock and we threw our bags in. I had sorted laughed at David as he continued to put layers on that morning but I would regret not bundling up a little more. We had our plastic reef shoes for in the boat so didn’t have to go barefoot since they had us remove our street shoes.

Getting The Feel For The Boat

Pushing off the dock we mugged for our first pics and headed out of the quieter water of the marina. David played a little and got a feel for the boat.  He then increased the speed to flatten us out. 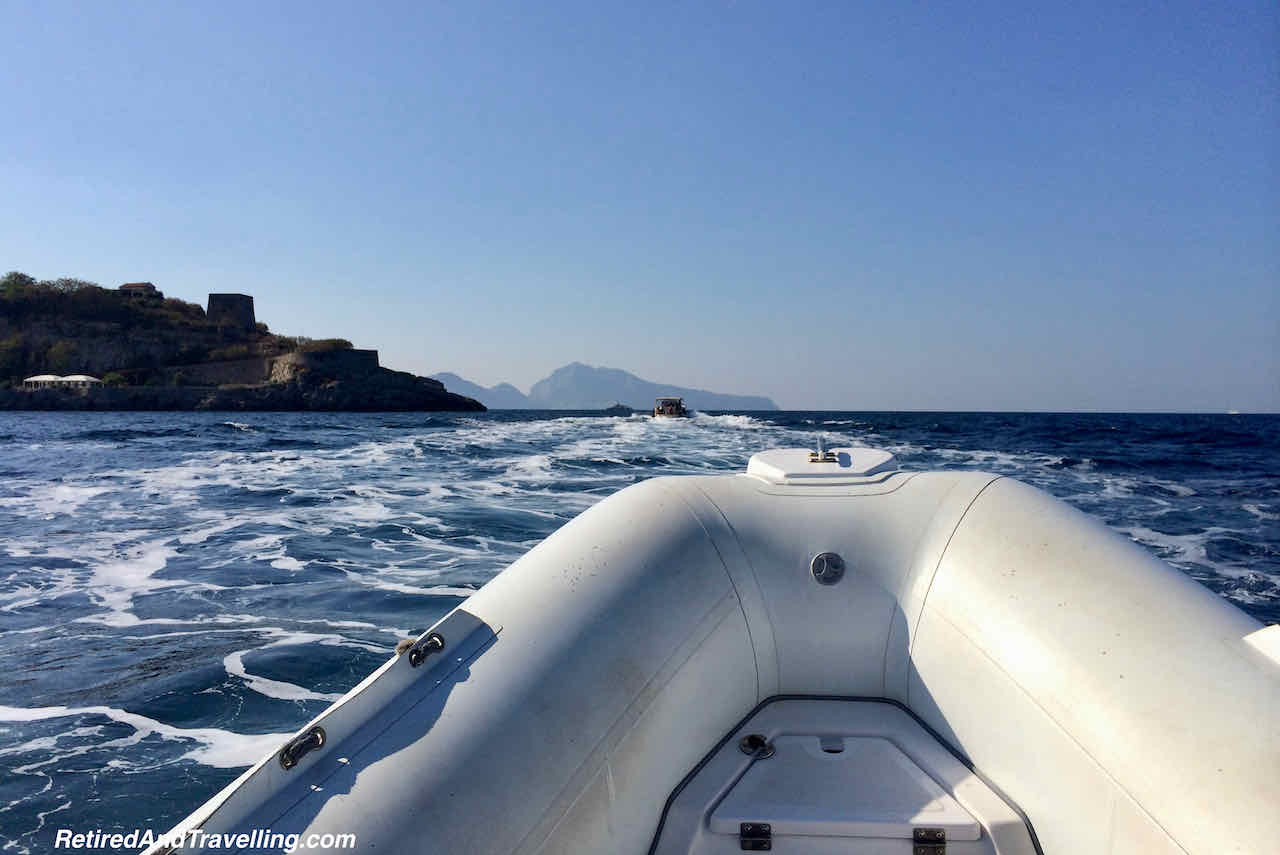 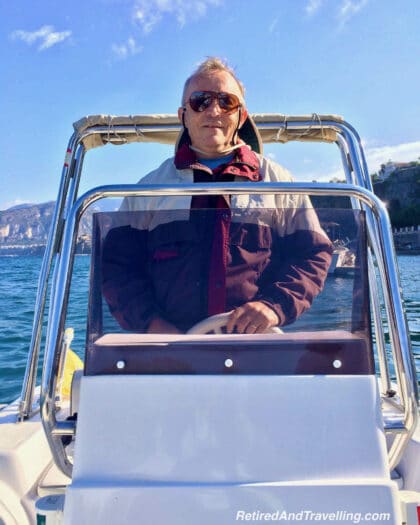 I sat up front and had a great view with wind and sun beating on me . I generally found it bearable when I had sun and wind.  But when the sun was gone, I quickly chilled down. As David warned me, when we ran at regular speeds the ride was quite bumpy. By the end of the day I felt quite beat up.

But while the boat ride itself was less than desirable, the experience was great. On our first leg we headed off from Sorrento with Capri right ahead. While most boat renters head to Capri, this was not on our agenda this trip.

Positano On The Amalfi Coast By Boat

We rounded the first big bend following another boat.  The waters were a little calmer but not quite the gentle ride we were promised. We had a great trip along the coast and saw the various small villages at sea level. In many spots there were solo houses or just steps visible down to the water. We were sure that locals had forever been creating steps and paths down to the water and the numerous little beaches in the coves along the shore. 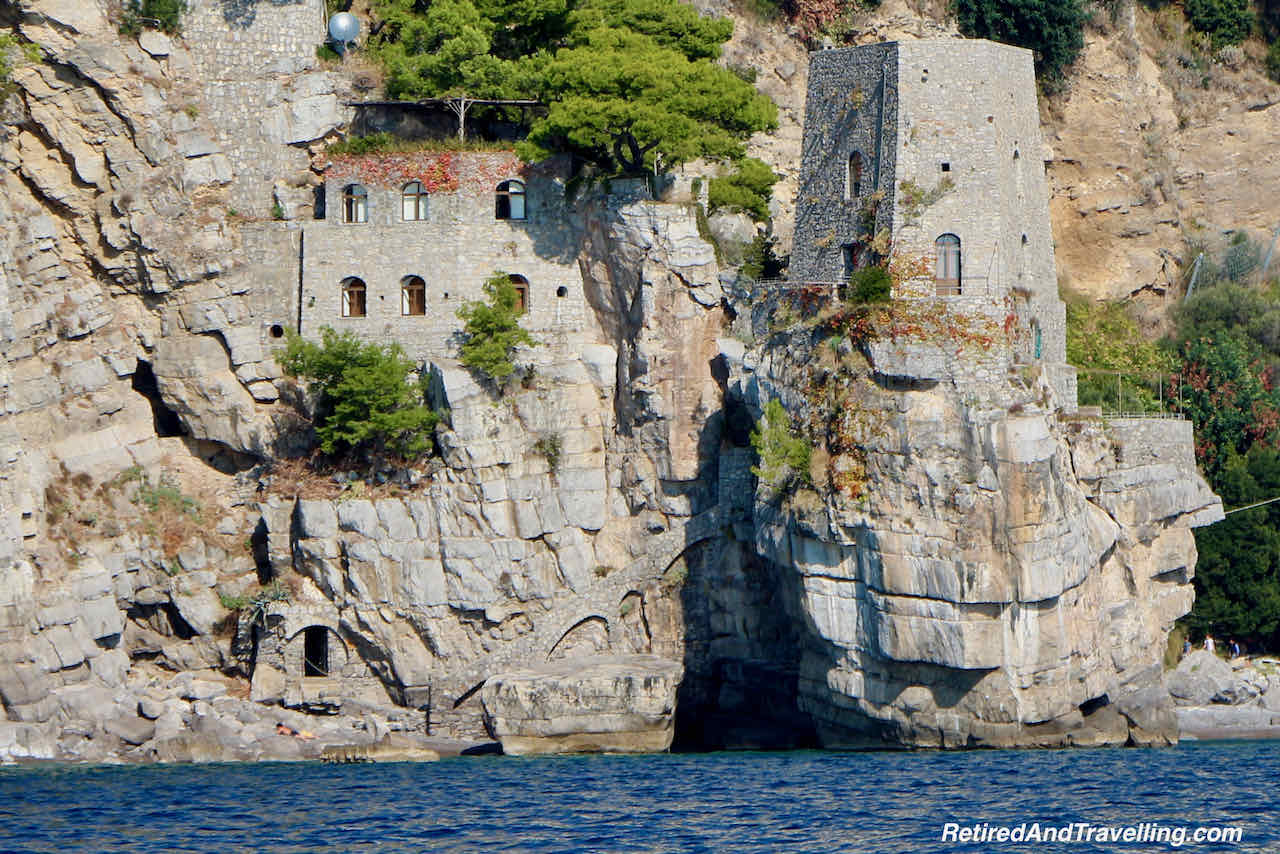 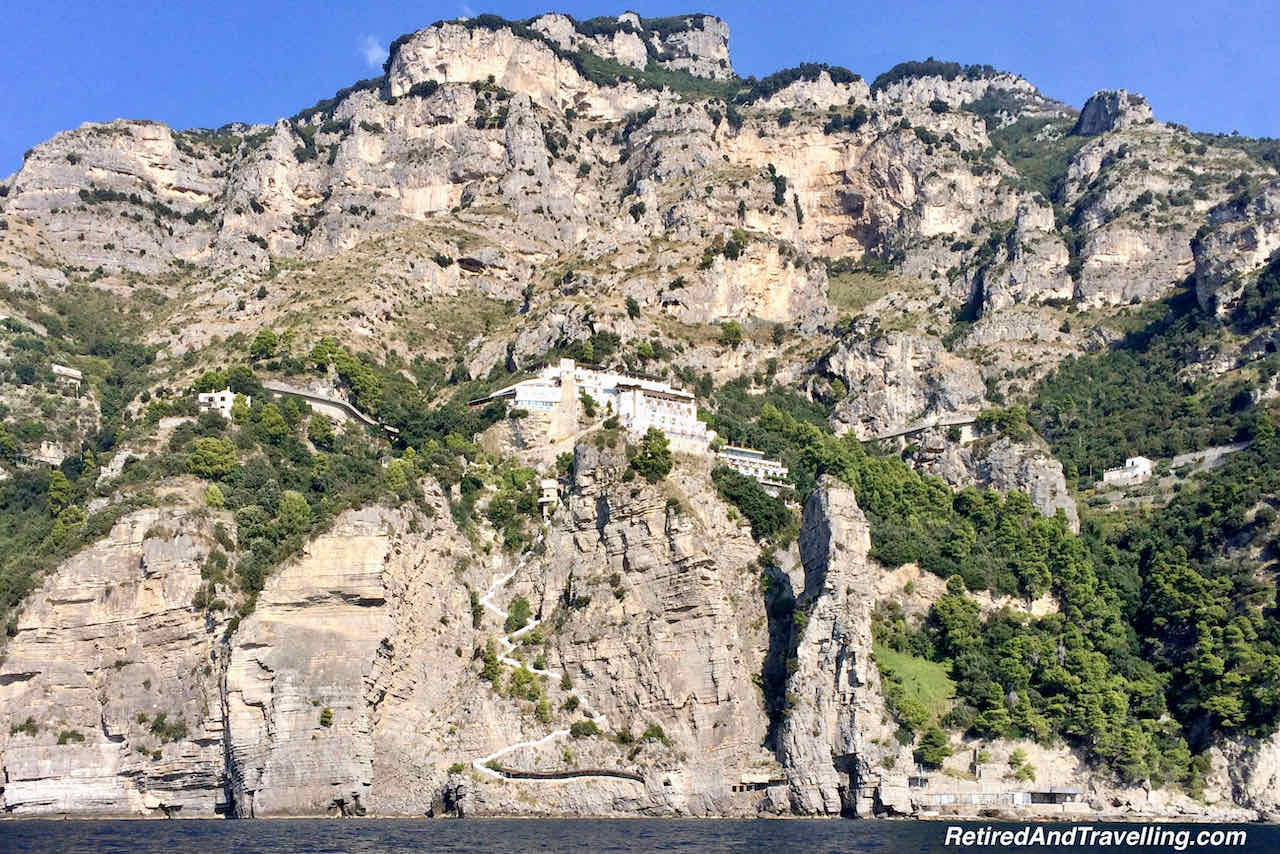 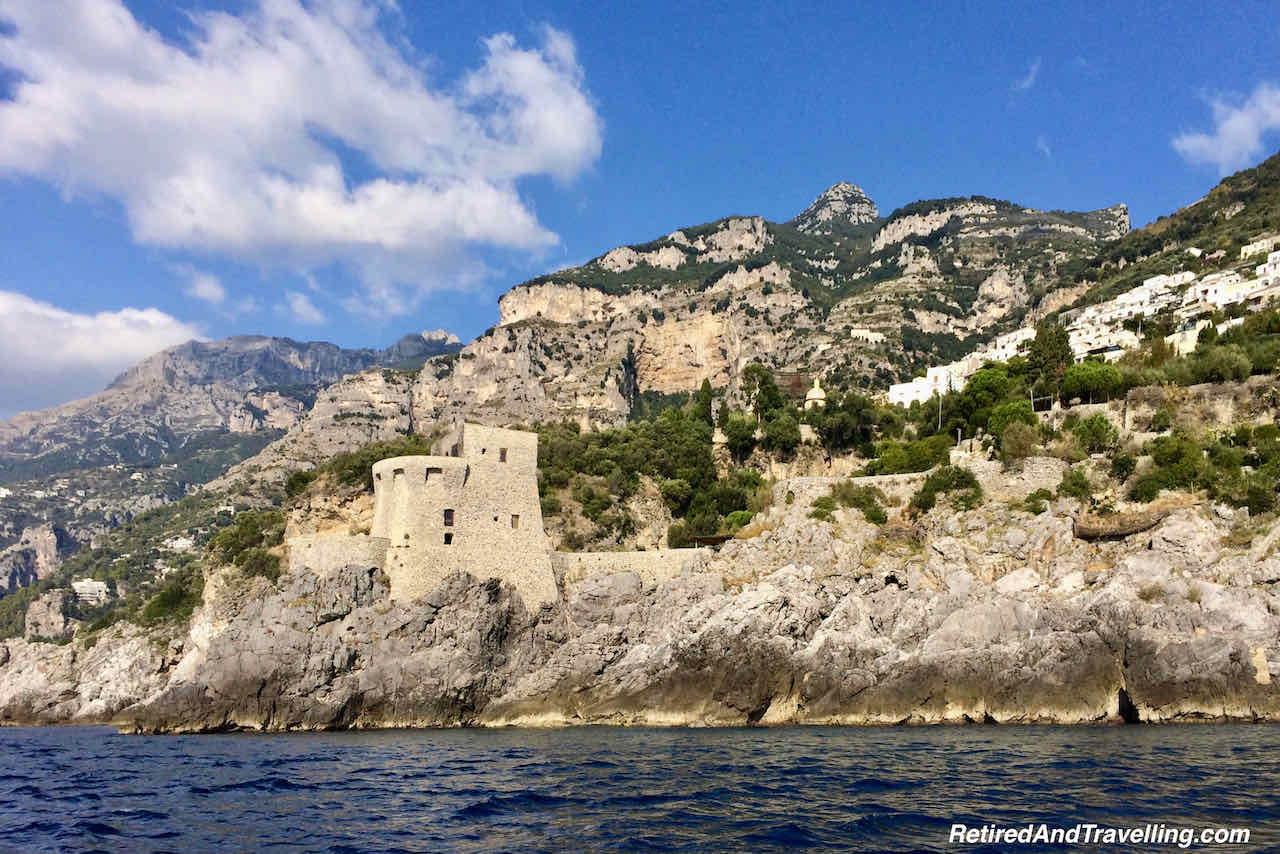 The landscape was fascinating with exposed layers visible on large rock faces. One rock outcropping in the water looked like a face when seen from one angle.  It had clearly at one time been connected to the matching shore rocks.  As we traversed past, it turned into yet one more pile of rocks. 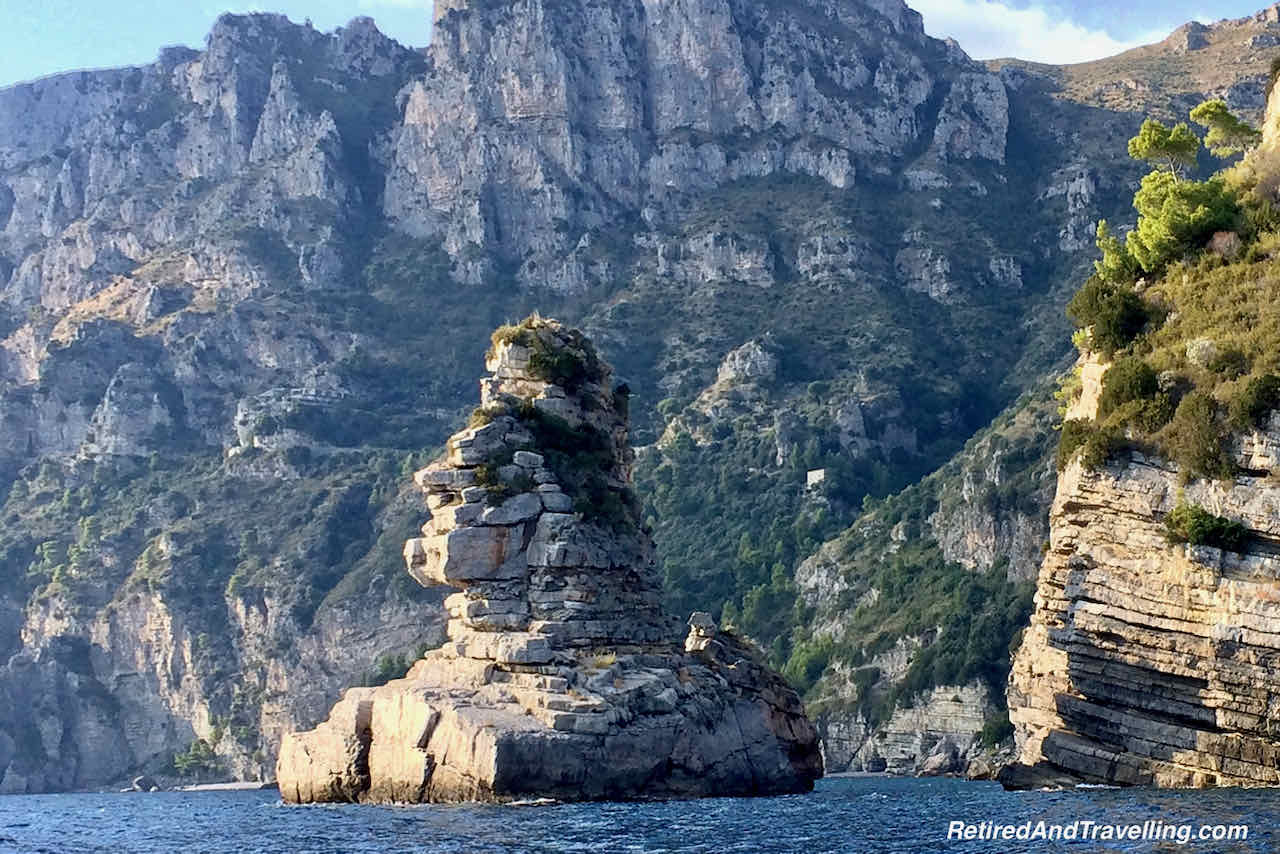 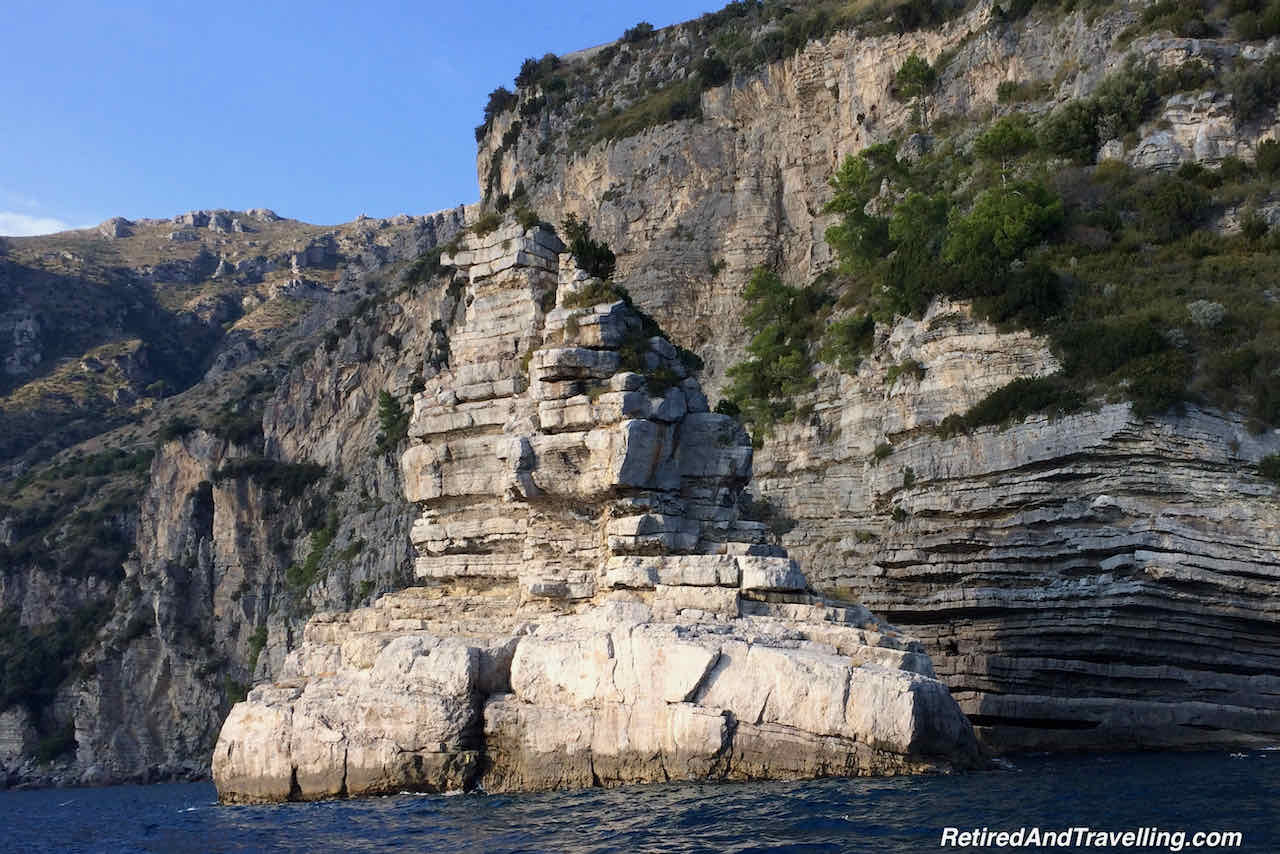 As we came closer, the town of Positano came into sharp focus. We had visited by bus one day.  But we didn’t get the full view of this colourful town on the steep hill unless we came at it by water. We slowed right down and cruised by for a new set of pics. 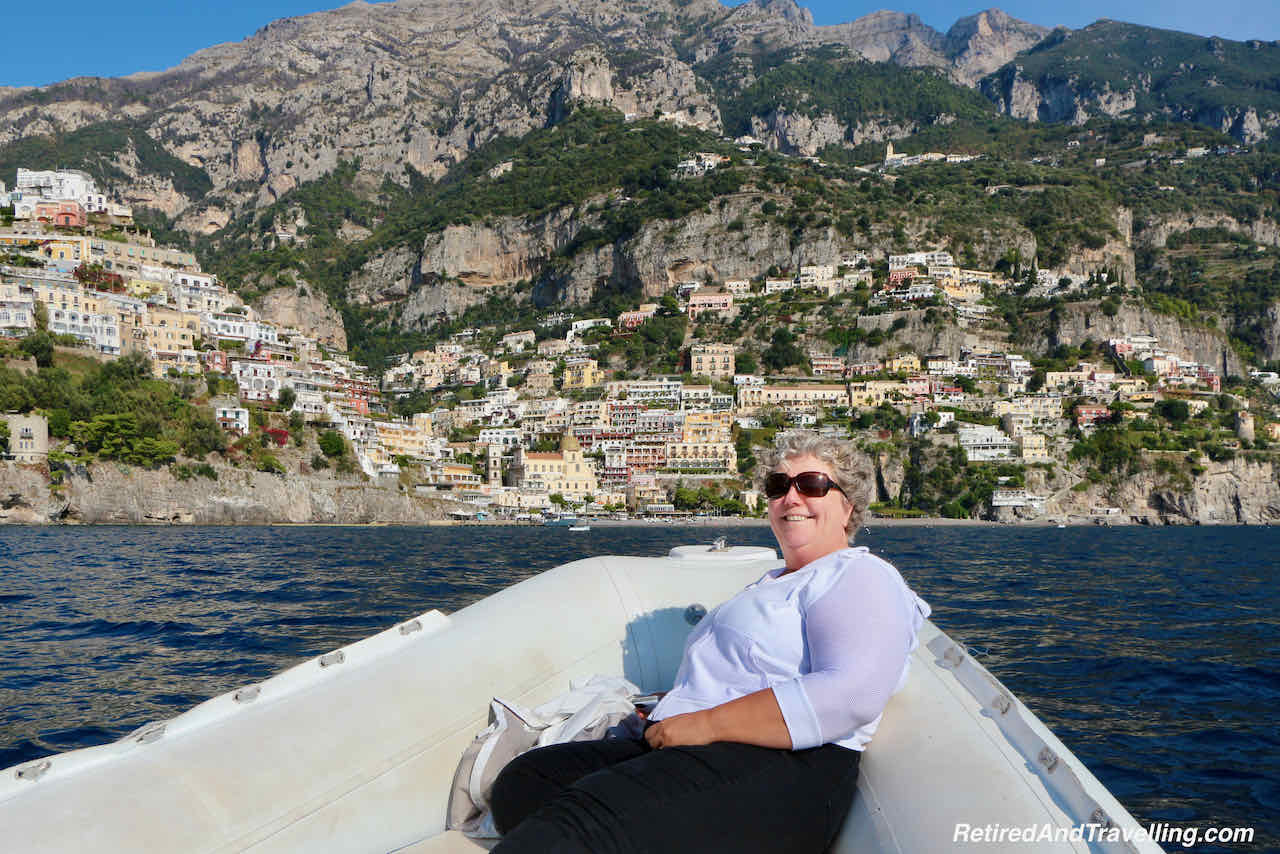 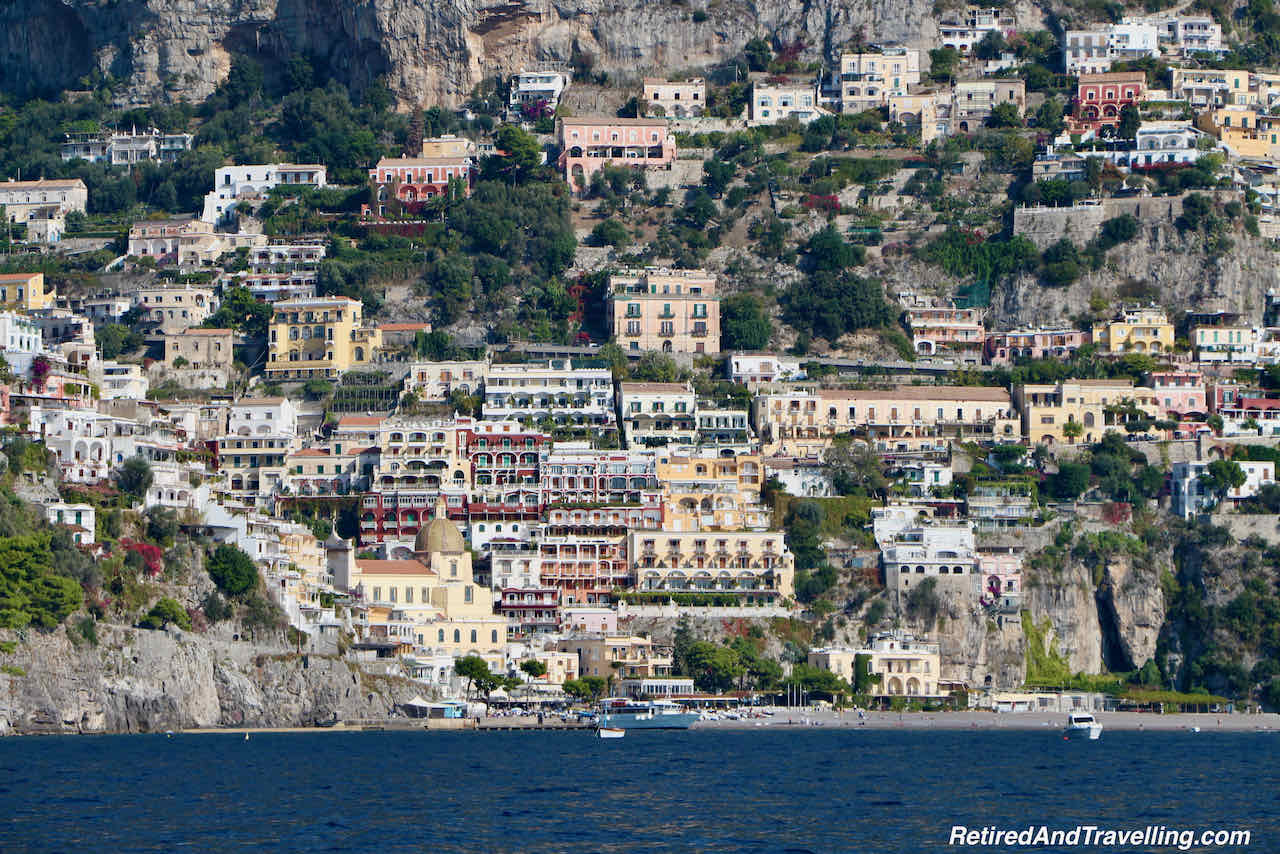 Now it was my turn to drive the boat and I had a ball. It had been a long time since I had last piloted a boat.  But this one was quite easy with a quick refresher from the captain. I had so much fun as we explored the Amalfi Coast by boat. 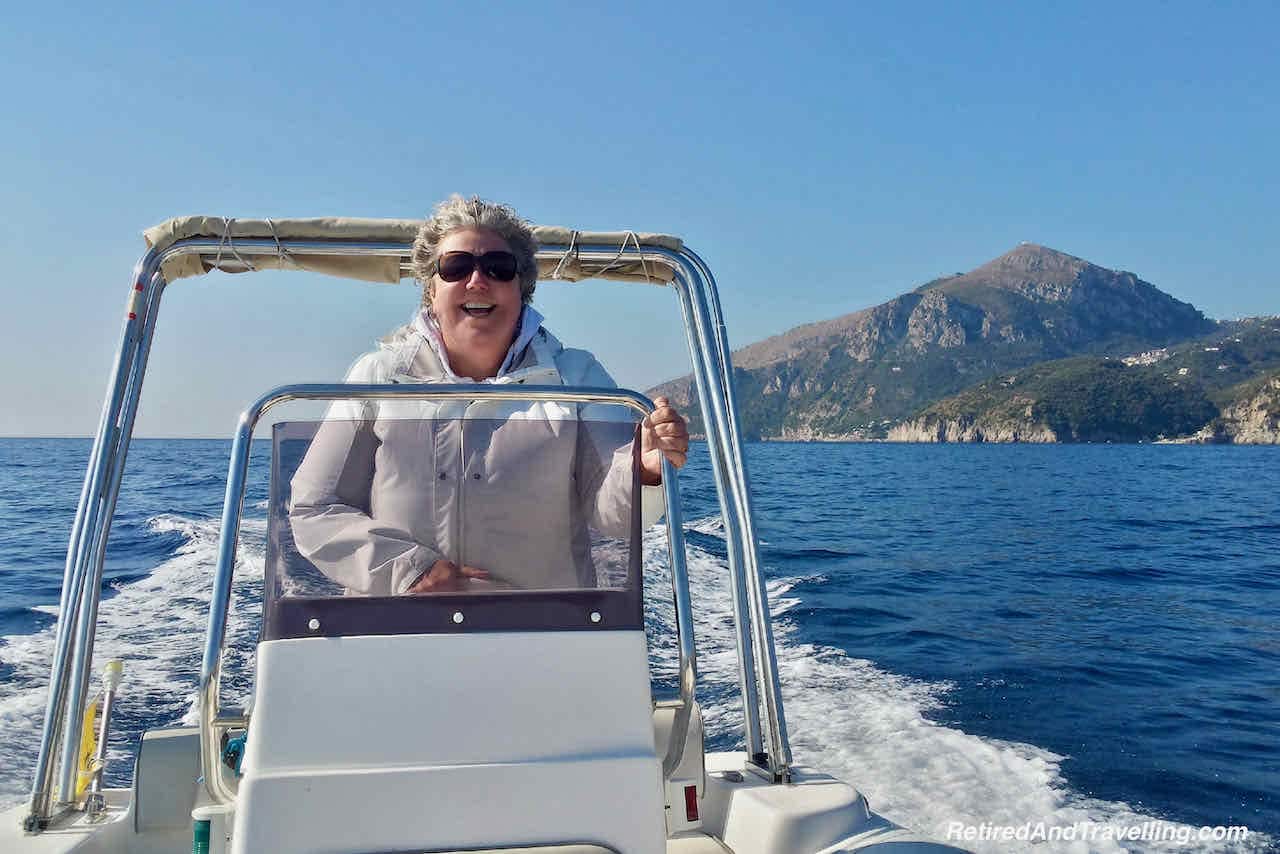 It was not long before we came up to the familiar coastline that was Praiano. We stayed in Praiano the previous year.  We knew to watch for the gleaming dome of the church, the gulley before the road tunnel and the walkway with swimming ladder at our previous hotel. When we went close to shore to try to see into the grotto by the hotel platform, we startled a pair who were sunning naked. 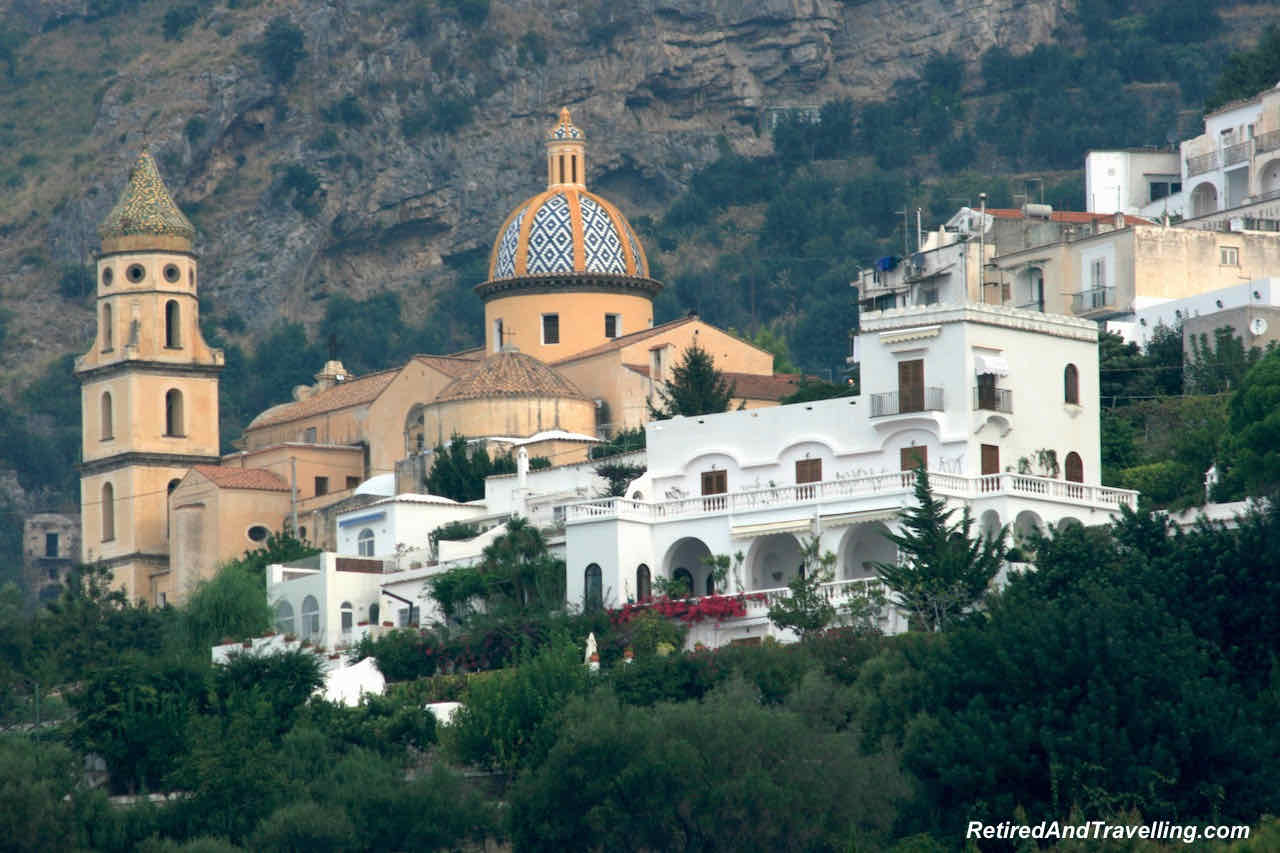 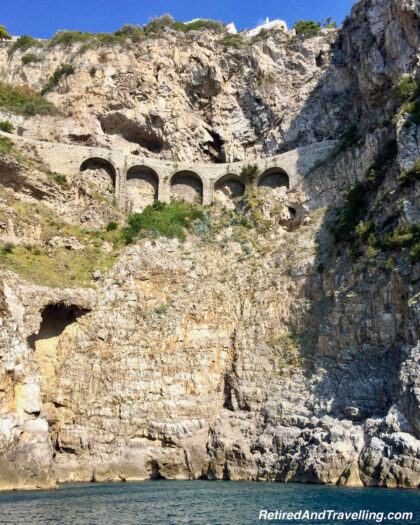 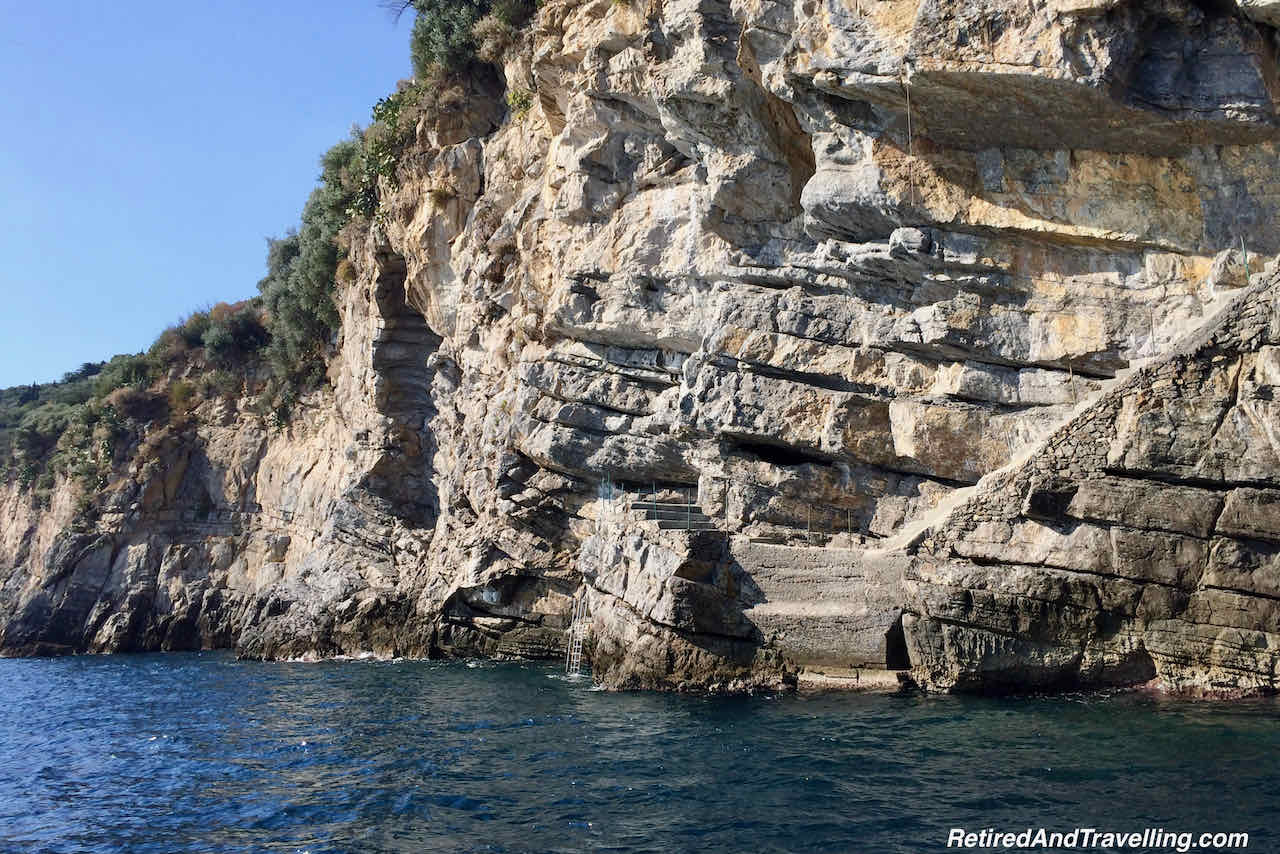 Rounding the final bend we turned the boat into the bay for the Praiano marina. We were prepared to pay for docking.  The 10€ fee got us an experienced hand to take care of the boat after he helped us off. We were sure it amused the locals when they saw us show up for lunch.  People commented on the people who came in the rubber boat. 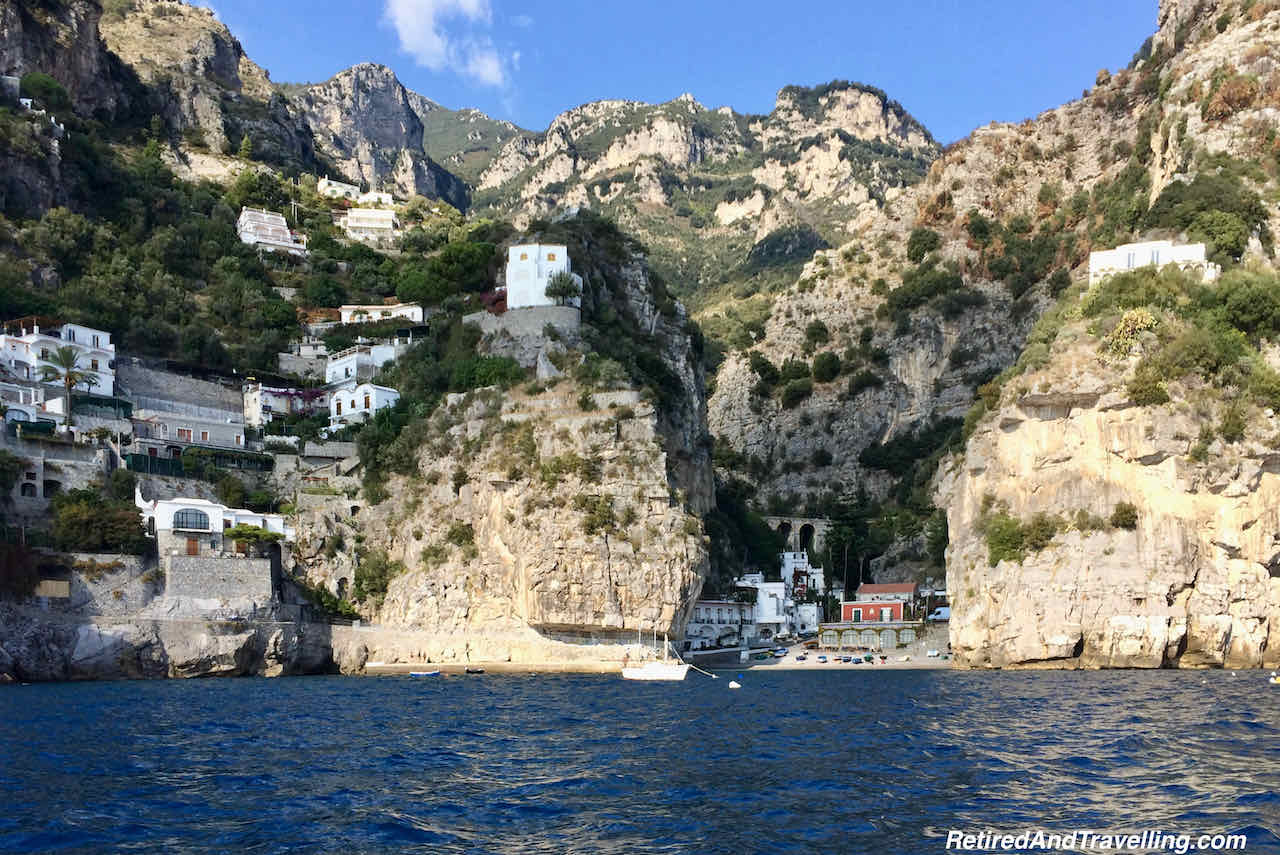 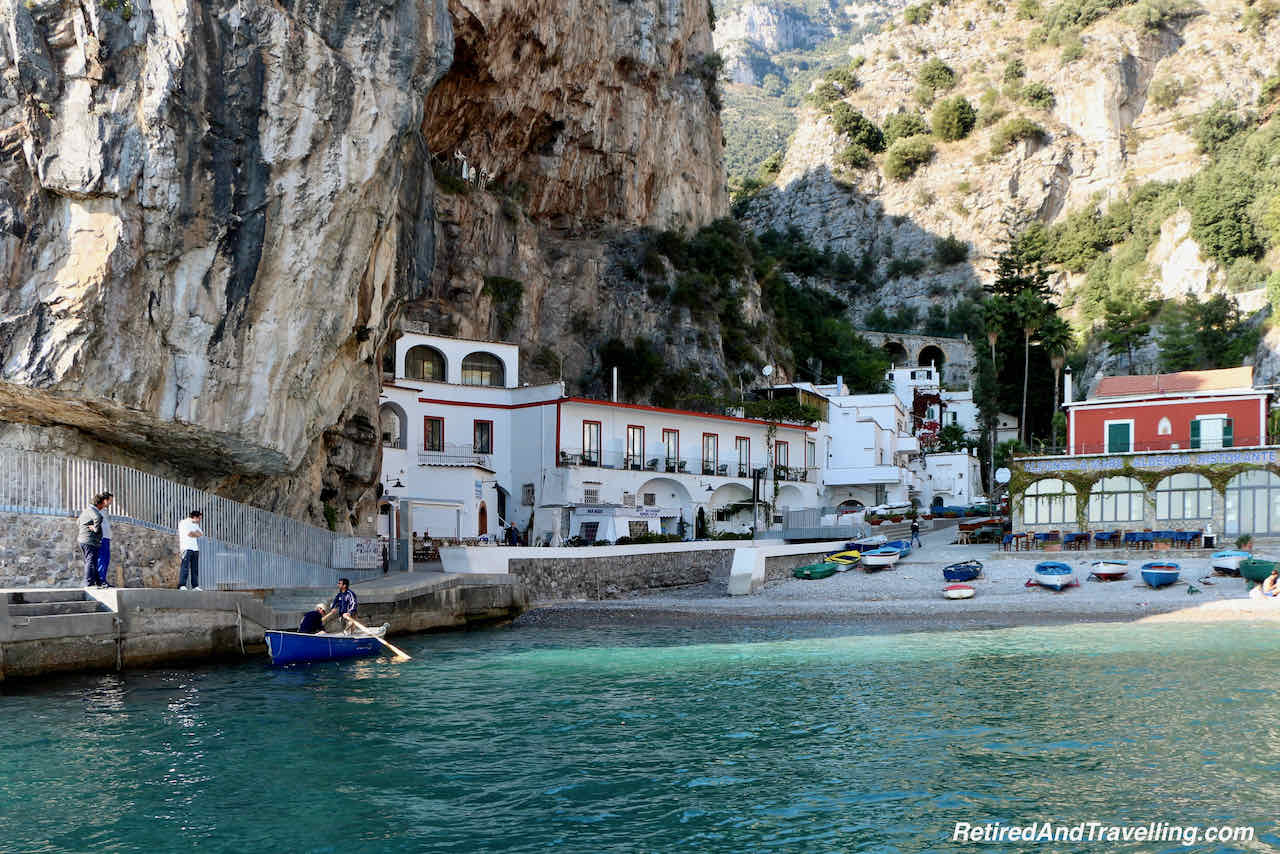 Since we came all that way without checking to see if our restaurant was open, we were pleased to see the Petit Bar Mare still open. They enclosed part of the patio to extend the season.  But it was warm and cozy inside this patio area. We were greeted by momma and Salvatore, not sure if they remembered us from the previous year or whether we just entered as if coming home.

I still remembered the great carbonara pasta I had last year.  But this time we pigged out on seafood. The mussels were huge, almost filling most shells. The seafood risotto for two was chock full of seafood. 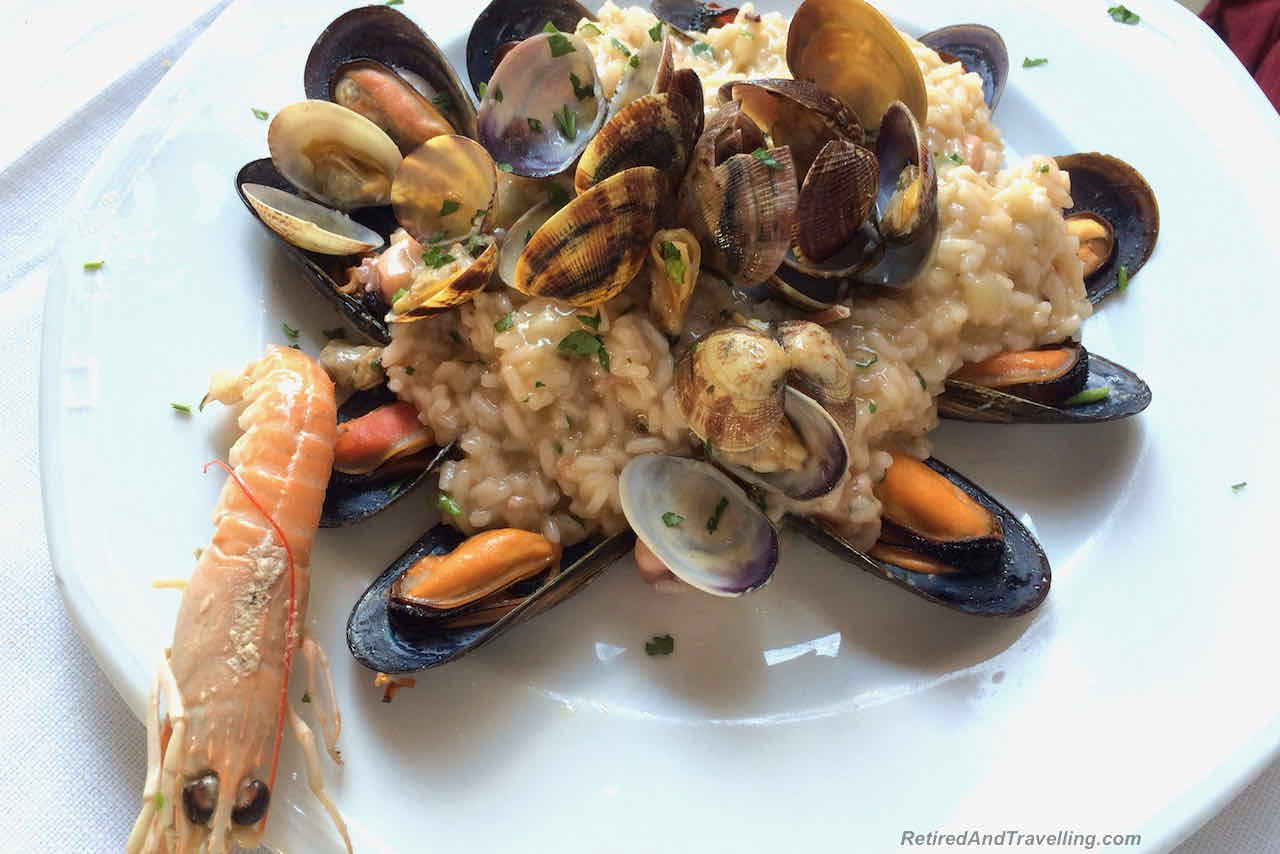 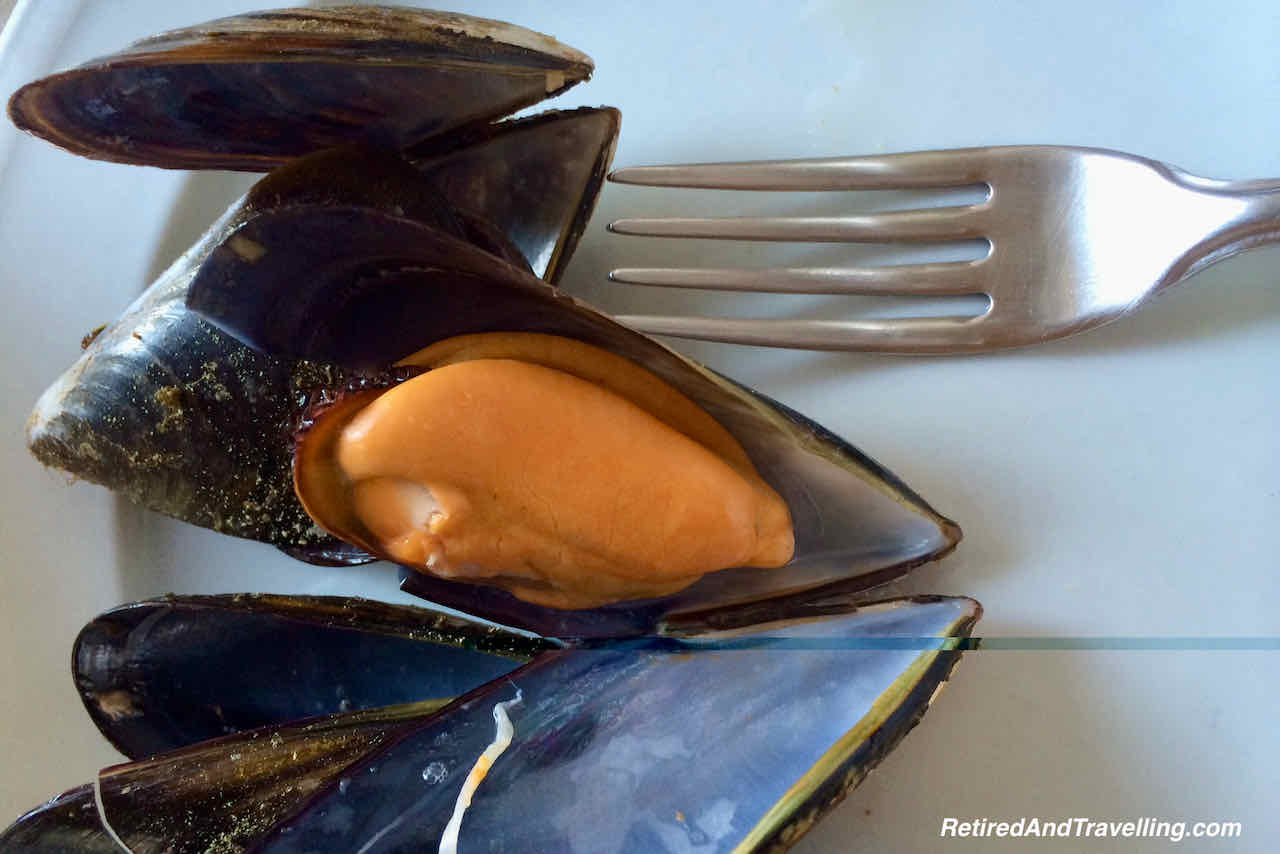 We passed on wine but enjoyed our limoncello and liquirizia as digestives after the meal. I was not be so happy on the bumpy ride back that I had eaten so much! Bidding goodbye until next year, we recovered our boat and left the cove.

A Great Day Exploring The Amalfi Coast By Boat

The wind did not settle down as promised so we decided to head back rather than head further along the Amalfi Coast. Some parts were quite rough .  But a couple of times we slowed down and stayed close to shore as we moved slowly along. We warmed up and sat back lazy for a bit.

Rounding the final major bend at Capri was as rough as we feared.  But we knew we were in the final stretch.  David docked with ease and we wobbled away until our legs adjusted to the firm ground.

We would definitely try renting a boat again and explore the Amalfi Coast by boat.  We might putter around Capri or take over one of the small beach coves along the coast. Maybe we will even try a sailboat next time!

The small rhib was great for the two of us and I found no reason to want someone else to captain the boat.  A great outing on our stay in Sorrento.  And a perfect way to finish our 10 weeks in Italy. 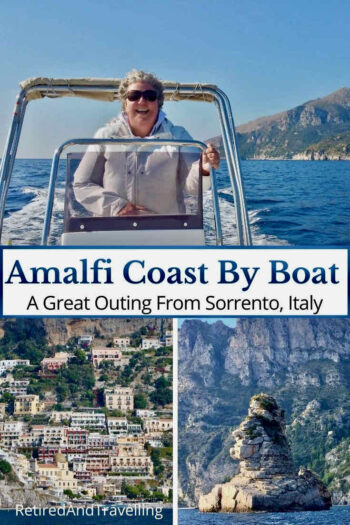 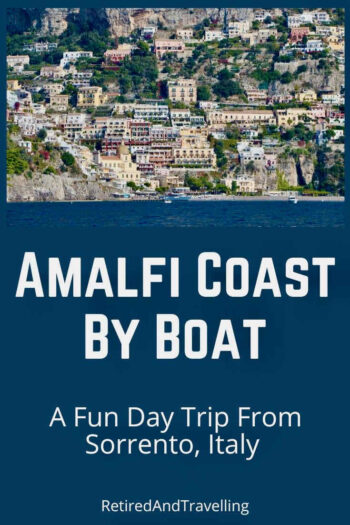 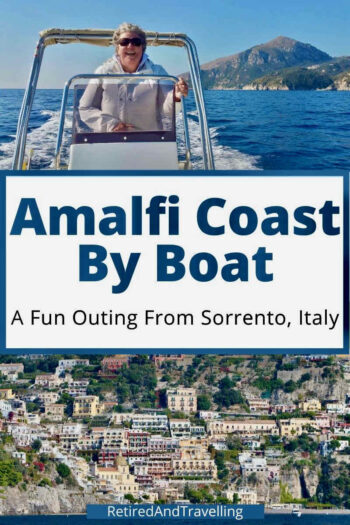