The Golden Circle Tour From Reykjavik

On our visit to Reykjavik, the top thing on our list was the Golden Circle Tour from Reykjavik. We saw an amazing variety of natural Icelandic beauty on our travels around Iceland on our Nordic Country cruise with Oceania Cruises. But we really wanted to do this classic Iceland tour. And we were delighted when we visited the Thingvellir Lava Fields (Pingellir in Icelandic), Haukadalur Geysir Geothermal Fields and Gullfoss Waterfall. 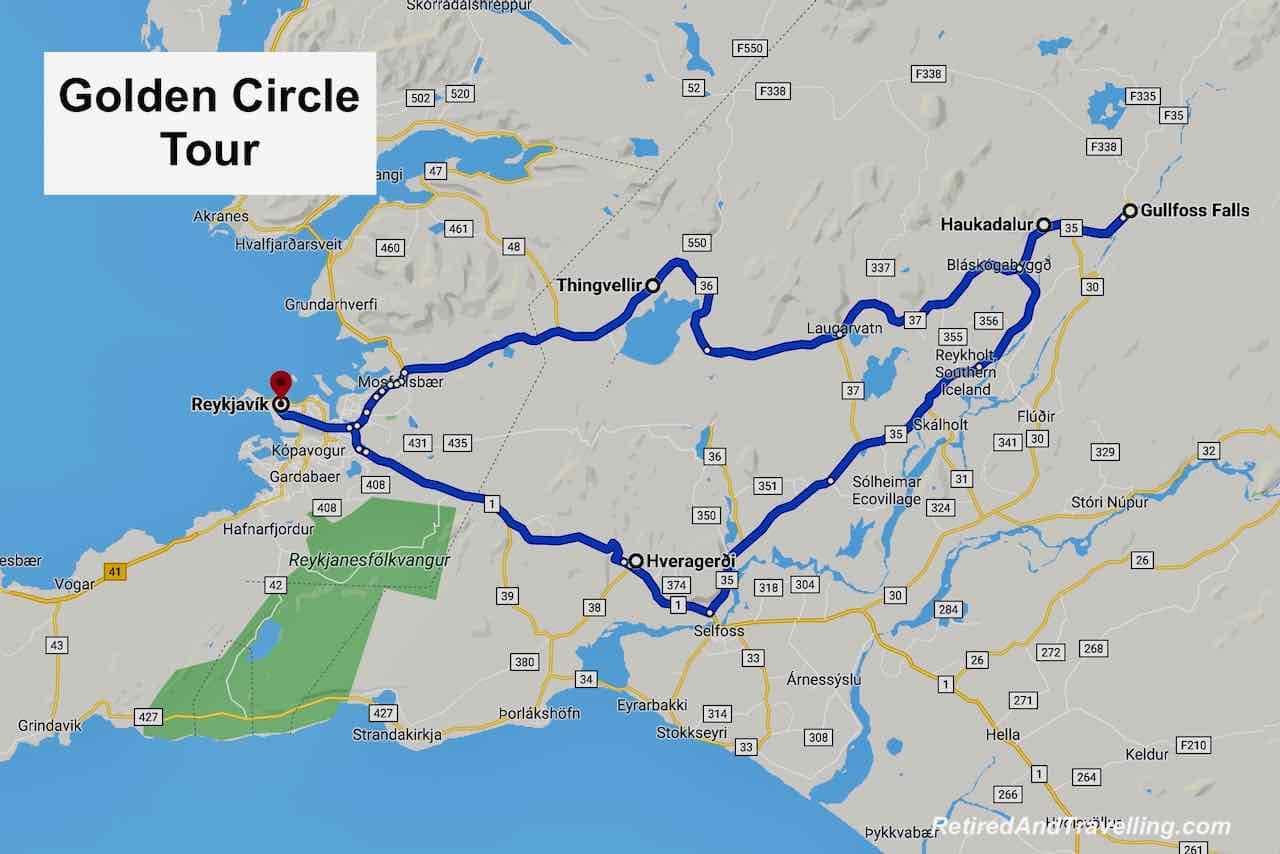 The Golden Circle route covered about 300 kilometers over 8 hours. We headed out of Reykjavík into central Iceland and then back in on another road. The three sites we visited were on the first half of the loop. So we could have driven both ways on the same road. But when we completed the loop, we saw vast lava fields. And the Hveragerdi area of active geological and geothermal forces.

This “loop” was quite different from the “Ring Road” that went all around Iceland and took more than a week to complete. That is a trip we left for another visit!

We saw lava fields when we toured in Northern Iceland from Akureyri. Our visit to Dimmuborgir showed us sharp rocky volcanic rock fields set into the base of an old lake.

On this tour, we visited the Thingvellir (or Pingellir) Lava Fields. Thingvellir National Park was a UNESCO site. It provided an interesting view into Iceland’s geological and historical heritage.

Iceland was divided by the Mid-Atlantic Rift. Parts of the country were on the North American tectonic plate. Other parts were on the Eurasian plate. This rift was above sea-level only in Iceland. And Thingvellir was the perfect spot to see both plates clearly.

The tectonic plates moved apart at approximately 2.5 centimetres a year and have done for millenniums. But in the summer of 2000, two severe earthquakes occurred in South Iceland. In most places, the plates slowly moved past each. But at Thingvellir, they broke apart and the land between them subsided. There was one spot where I stood with one foot on each plate! 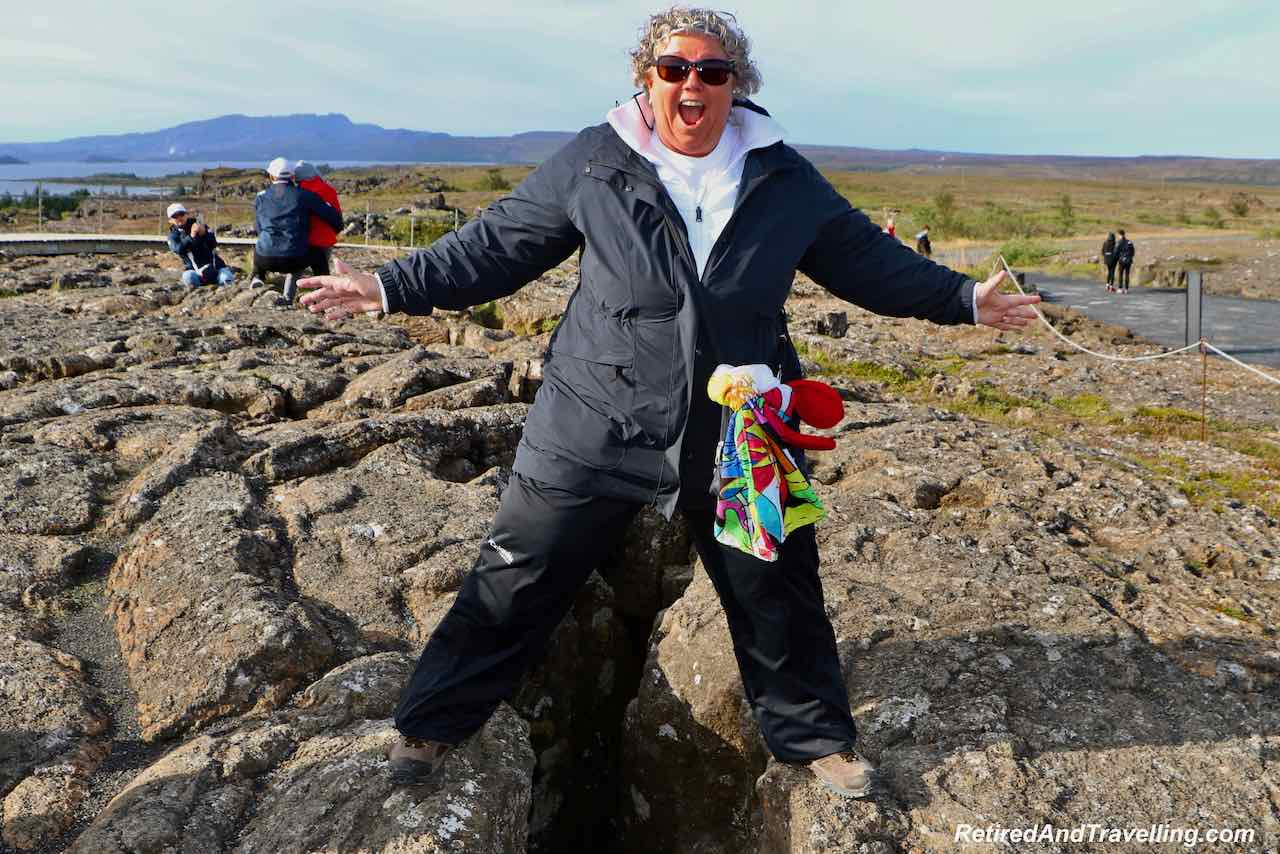 One of the major earthquakes caused a large rift to open up next to Lake Thingvallavatn. The Silfra fissure filled with meltwater from Langjökull glacier. This channel had the clearest fresh water in the world. And the underwater visibility exceeded 100 meters (328 feet). It was definitely a spot we would like to re-visit for scuba diving!

Walk Through The Thingvellir Lava Fields

Our first view was out over the vast lava fields of magma with Lake Thingvallavatn below. Thingvellir was the site of the oldest still standing parliament in the world. The Icelandic “Pingellir” translated to “the fields of parliament”. Along the river we saw the first Viking parliament or Althingi founded in 930 AD. 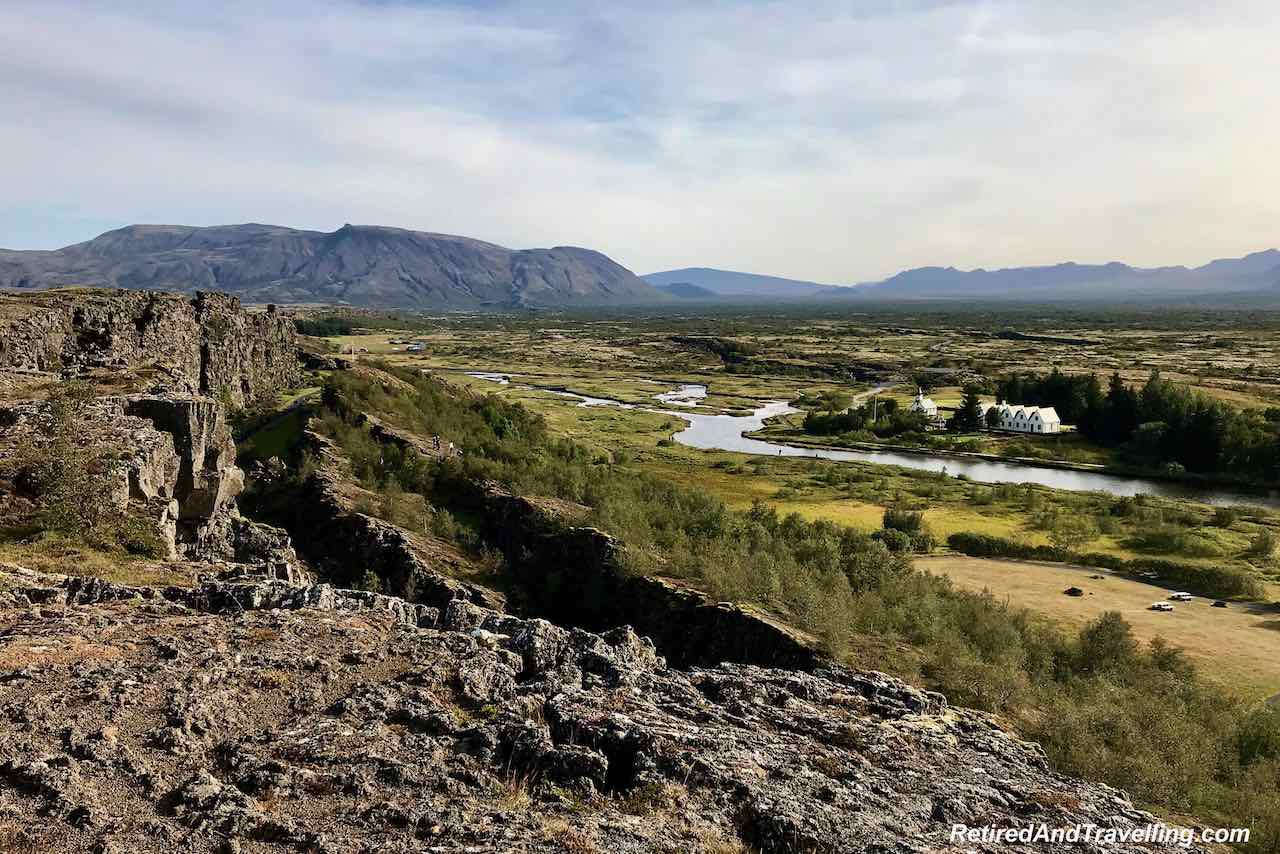 We following the path down and then walked along the rock face. It was fascinating to see the jagged rock faces that towered over us. 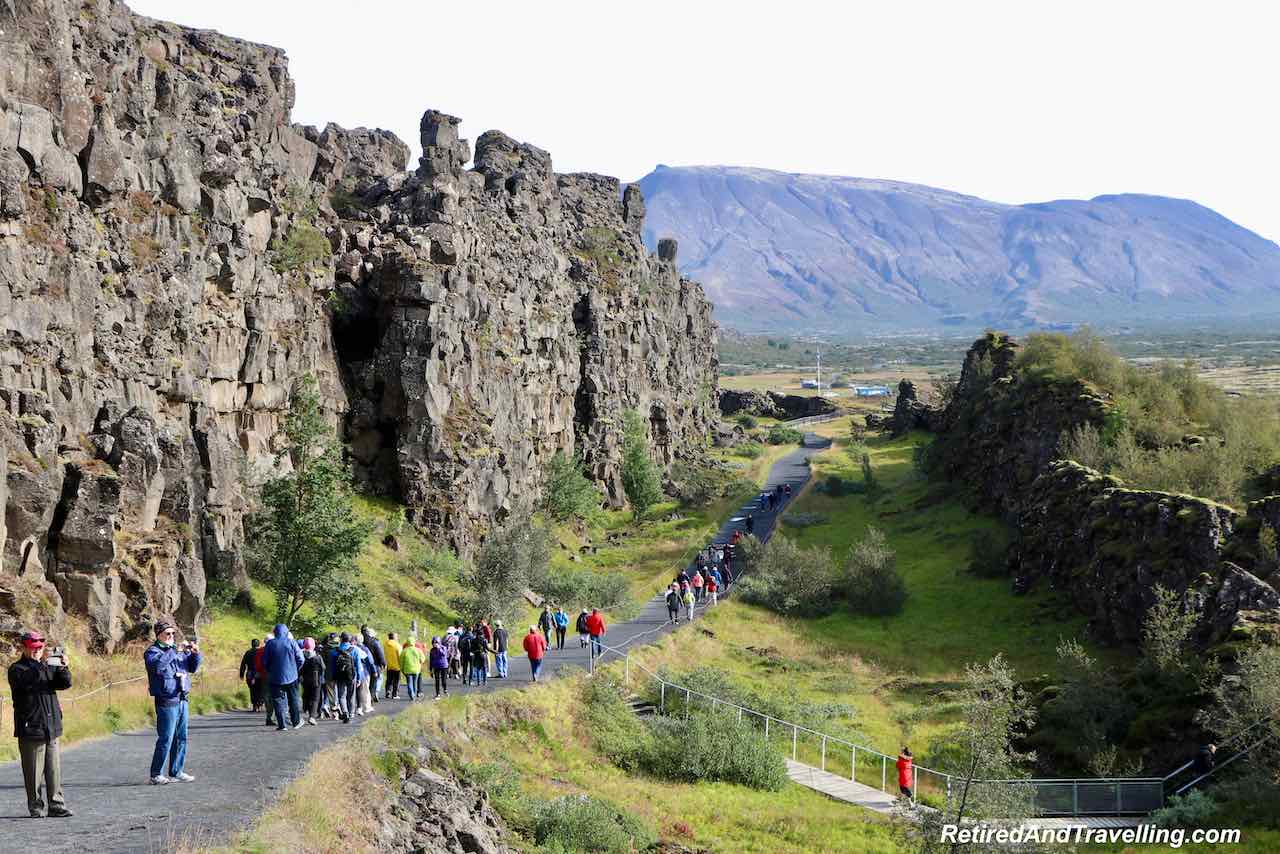 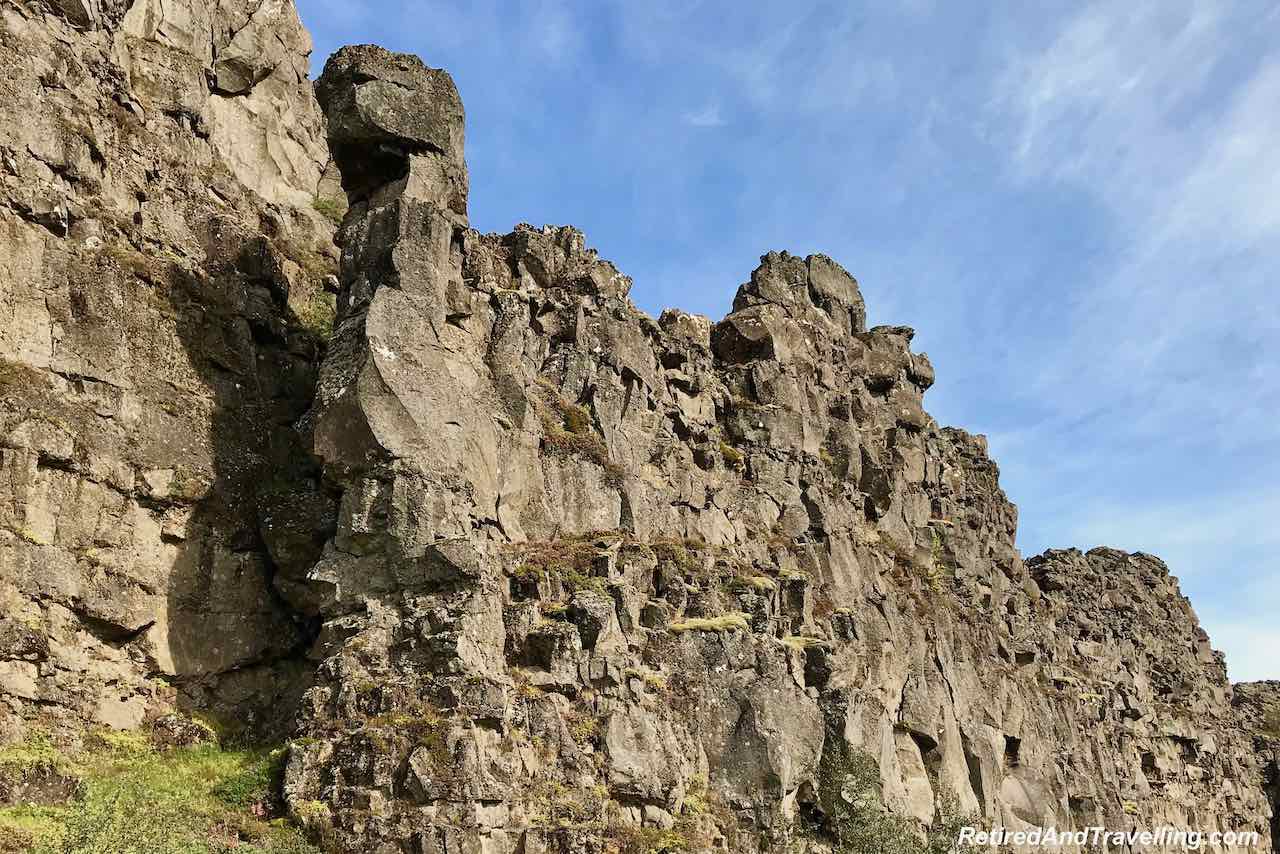 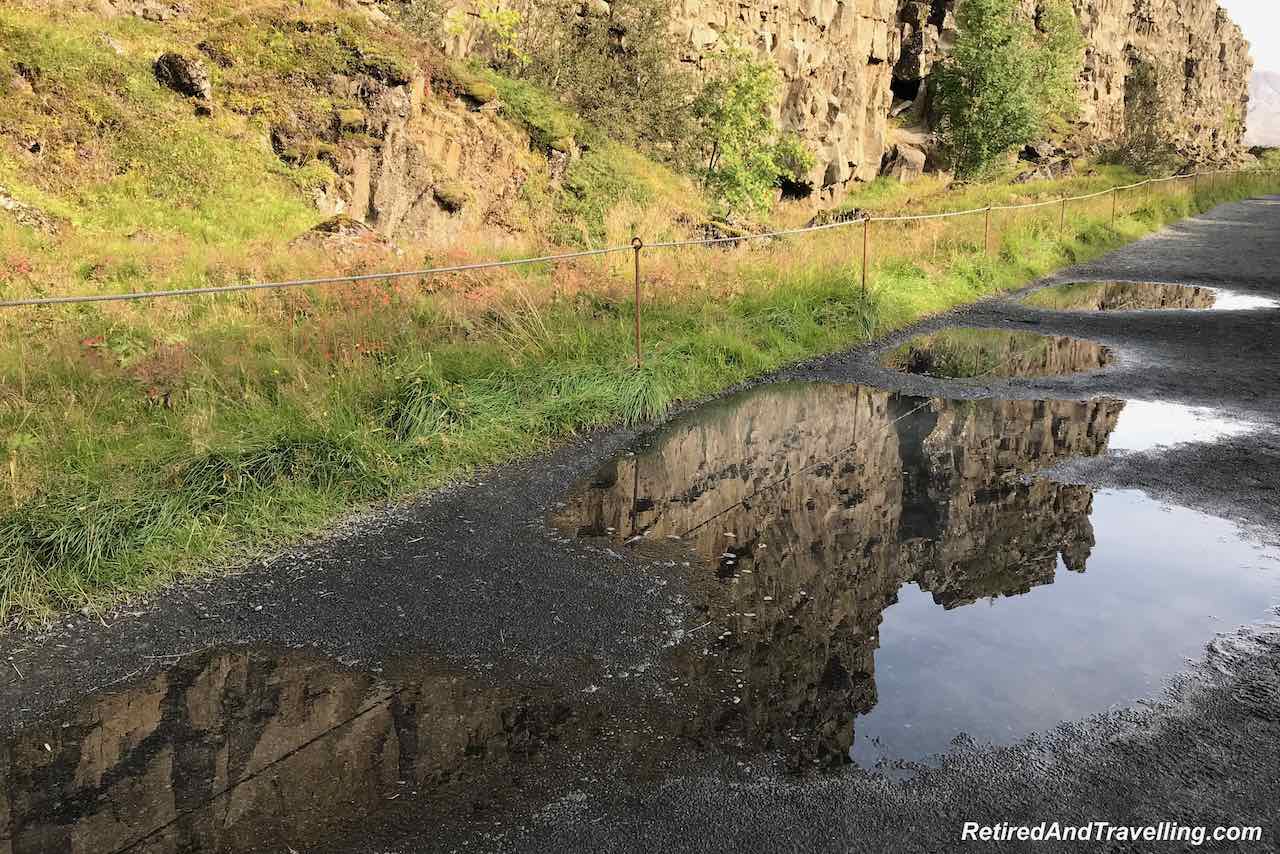 We saw a small stream. Meltwater from the Langjökull glacier travelled underground through porous lava rock and entered ravines and springs. We stopped by the Drowning Pool. In the past, Iceland settled issues with public execution and corporal punishment. Drowning was usually reserved for women found guilty of “loose morals”. The memorial plaque commemorated the 18 women drowned at this spot. 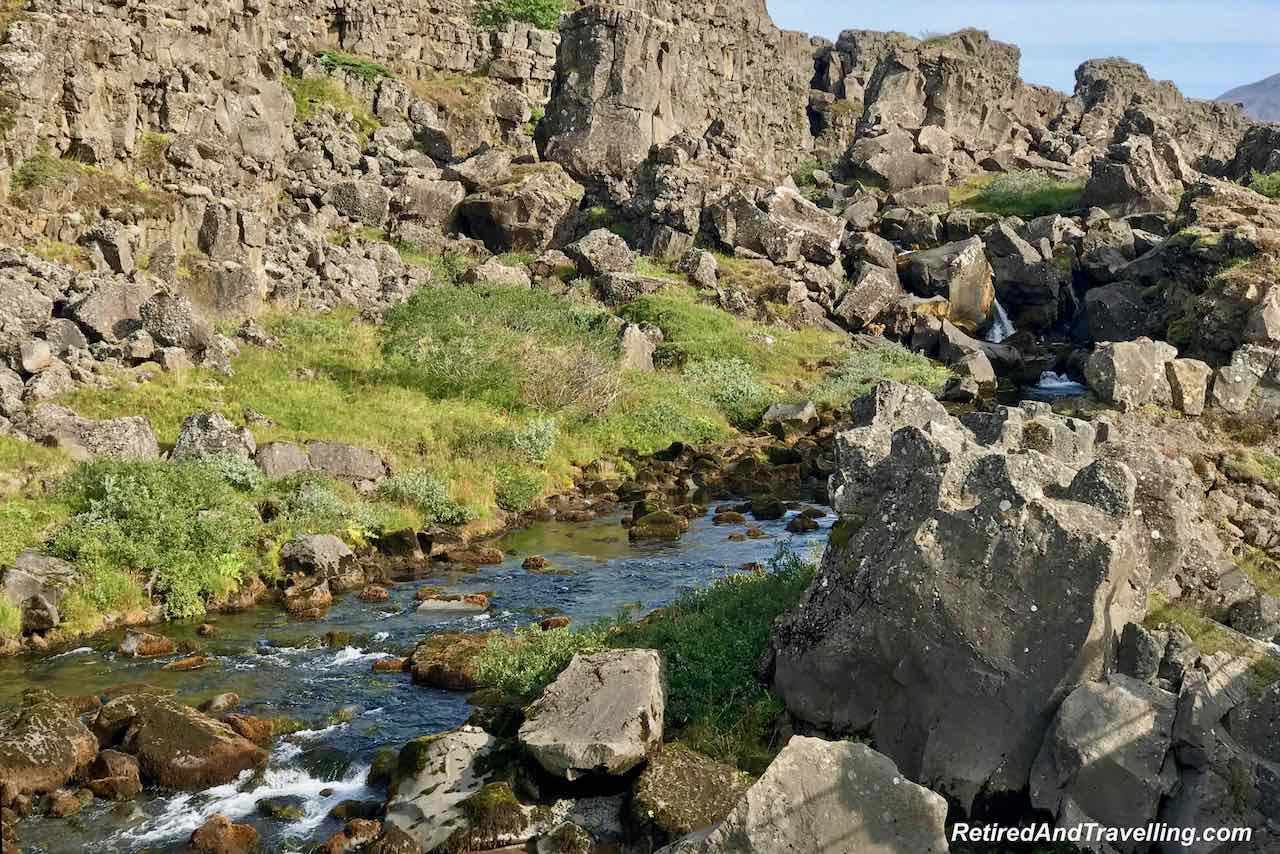 When we reached the bottom, we walked on the paths to the lower viewpoint. We saw a different perspective on the path we walked. And got a view back towards the lake. 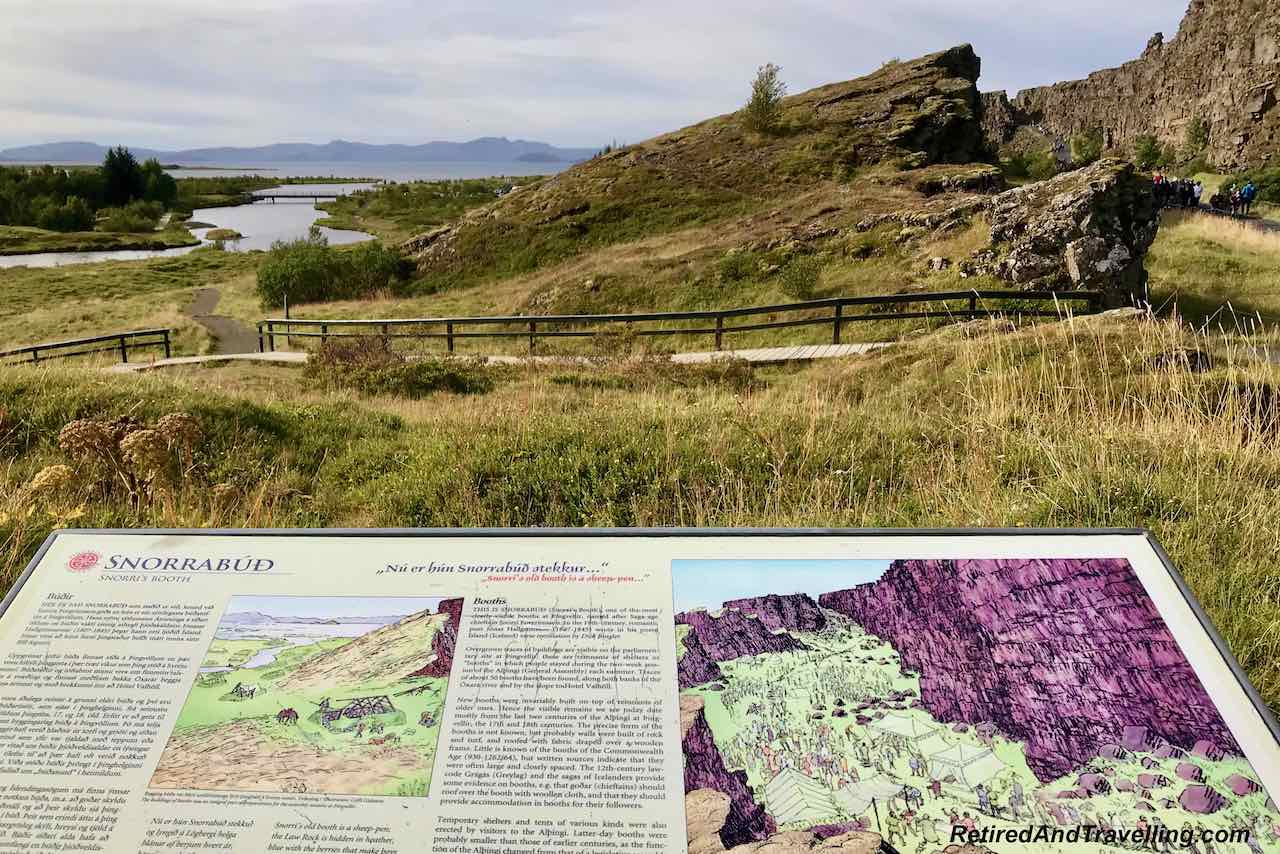 Our first stop at Thingvellir was an interesting view into Iceland’s geological and historical heritage on our Golden Circle Tour from Reykjavik.

We saw a great geothermal area when we toured in Northern Iceland from Akureyri. Our visit to Namafjall showed us bubbling springs in multi-coloured fields. On our Golden Circle tour from Reykjavik, our second stop was at the Geysir geothermal area at Haukadalur with its multitude of hot springs.

As we entered the sight, we saw steam puffs in the fields in the distance. It reminded us of some of our first views of the geothermal activity at Yellowstone National Park. 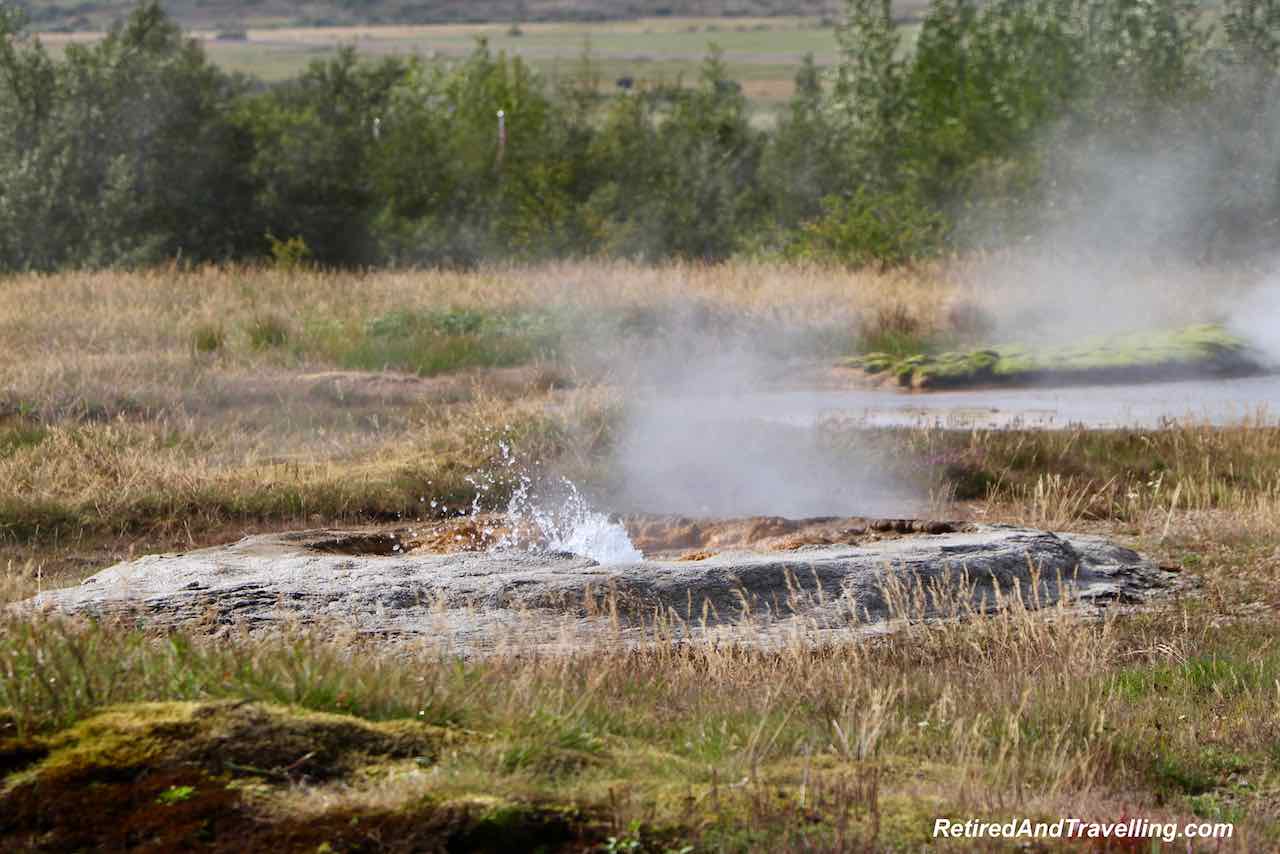 We passed the sign for the original Geysir that has not been active for years. The Strokkur geysir blew hot steam high in the air every 5 to 10 minutes. We found a spot up-wind of the bubbling pool and waited. It was not long before we were delighted by the eruption. 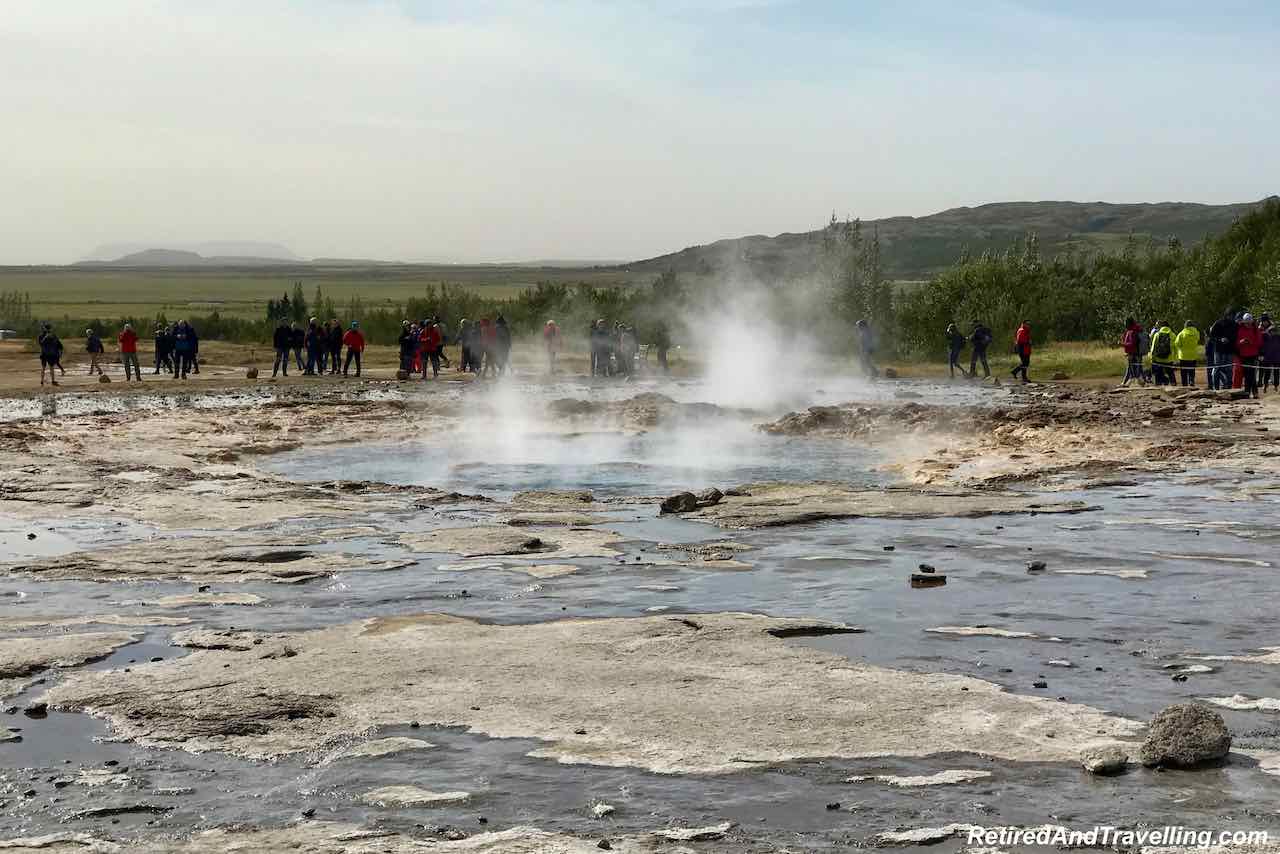 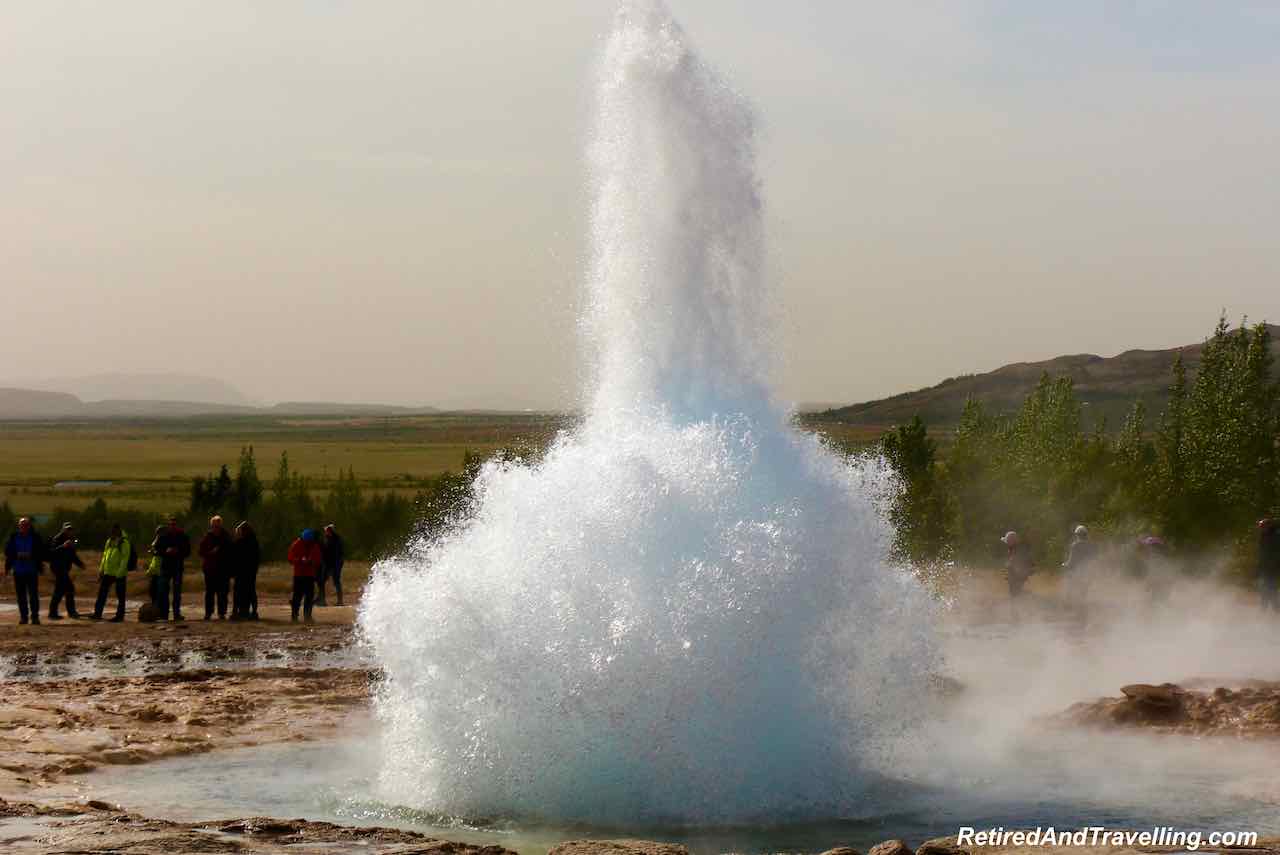 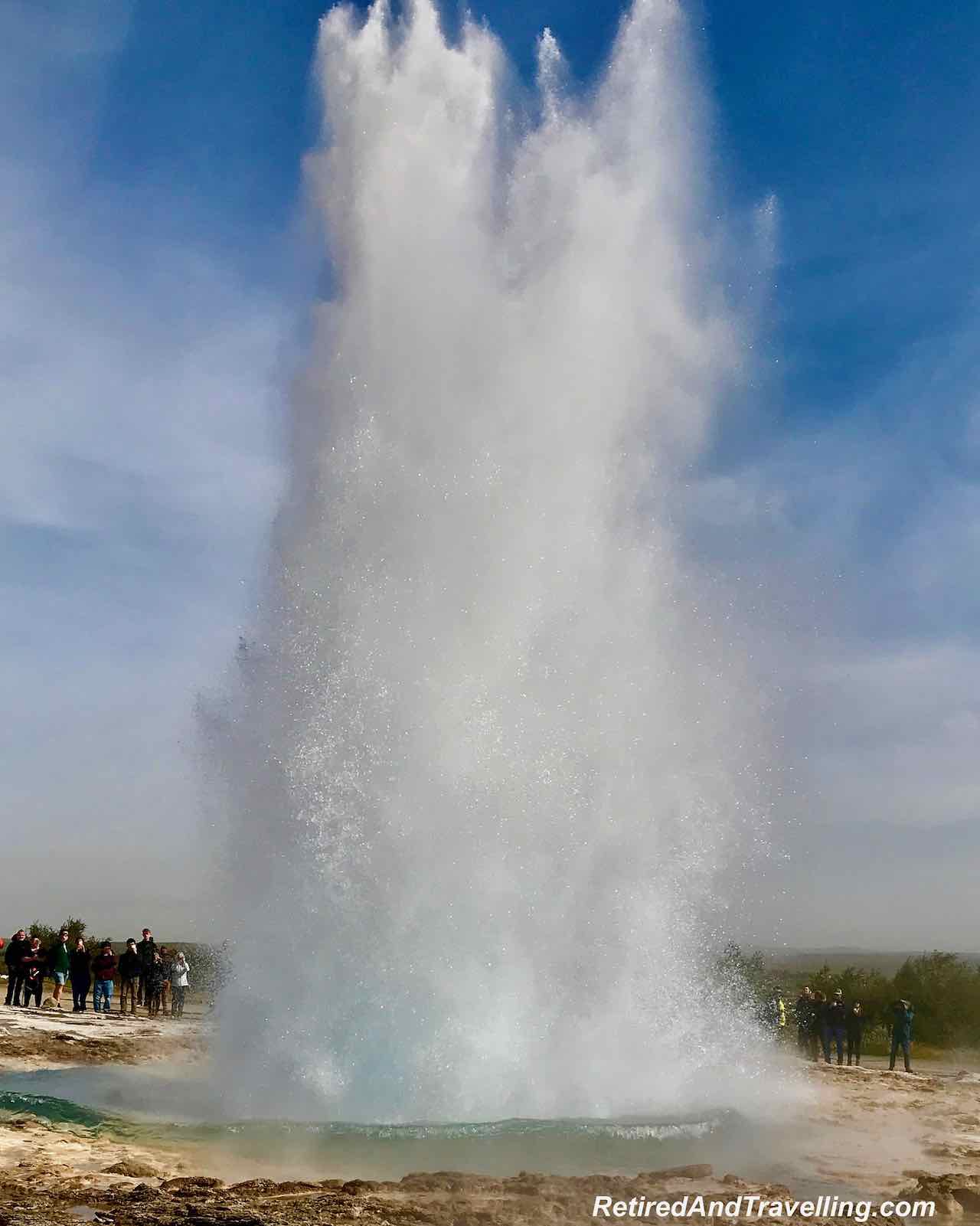 The path took us higher. There were other bubbling pools around the site. And we got a broader perspective from here when Strokkur erupted. Unfortunately, there was not enough time to climb the small hill to get a view out over the whole area. 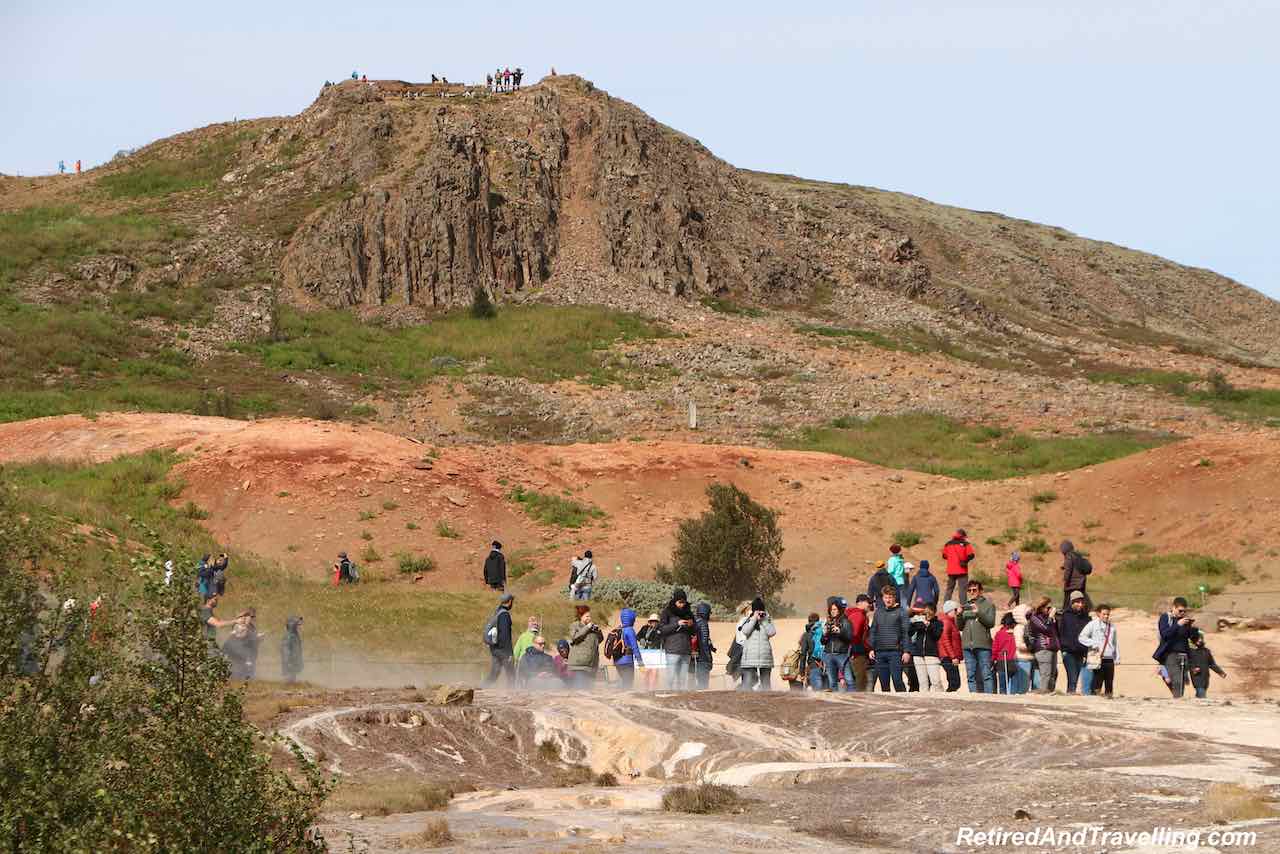 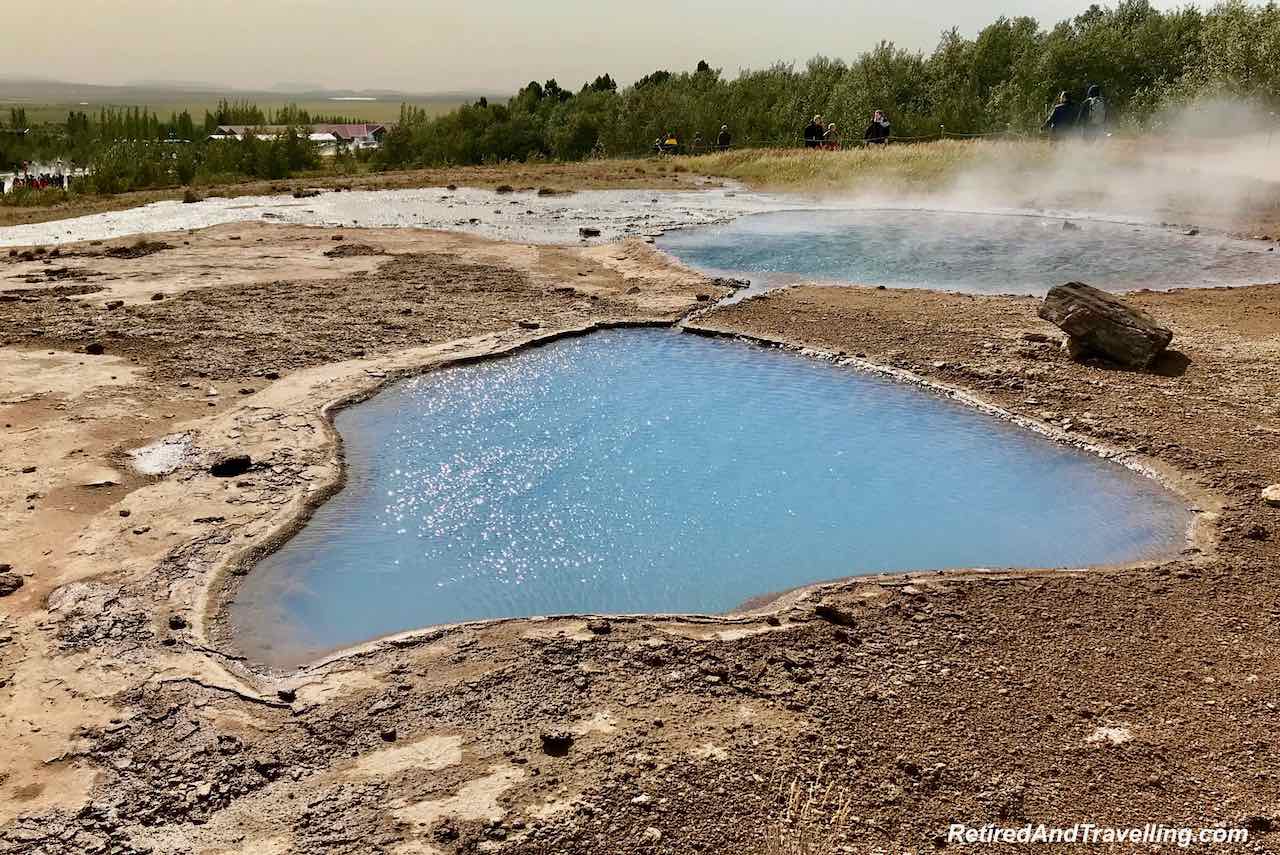 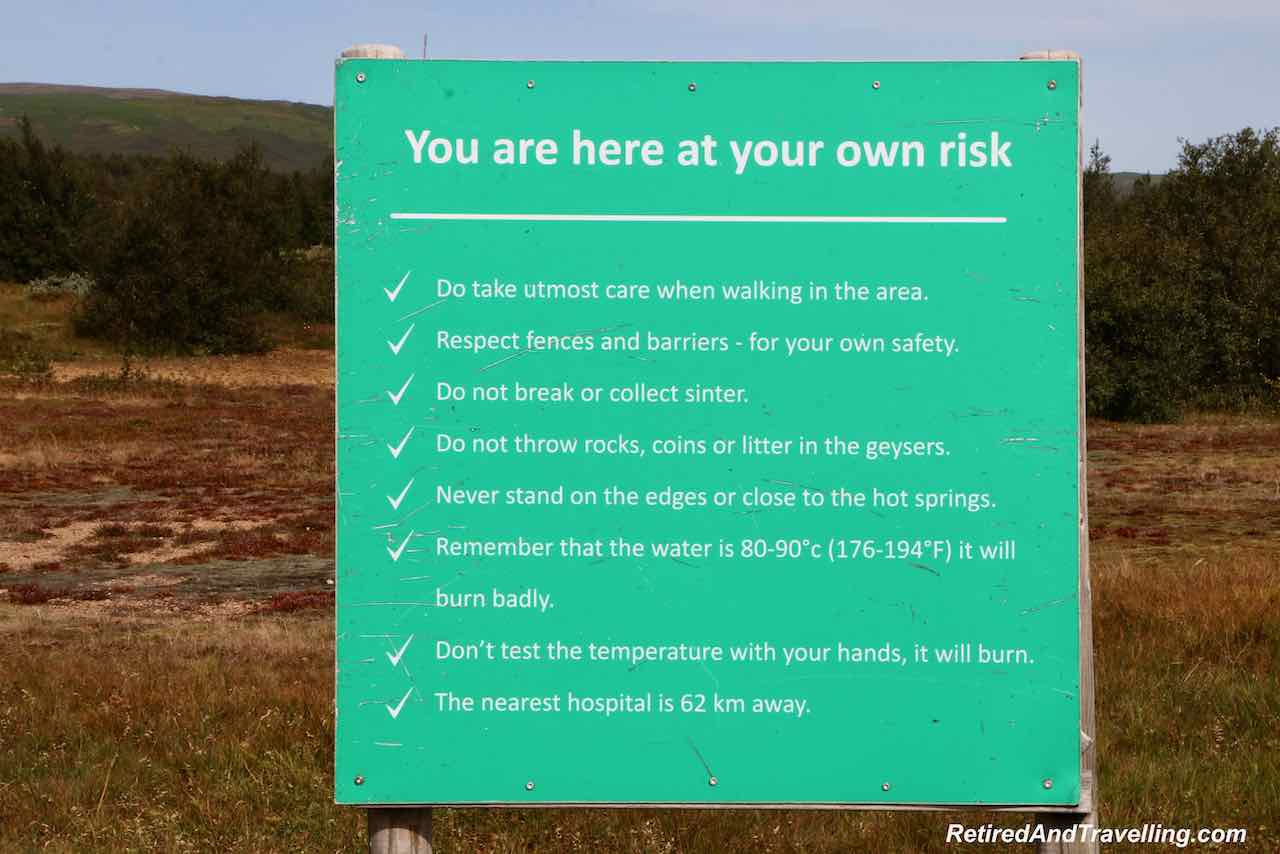 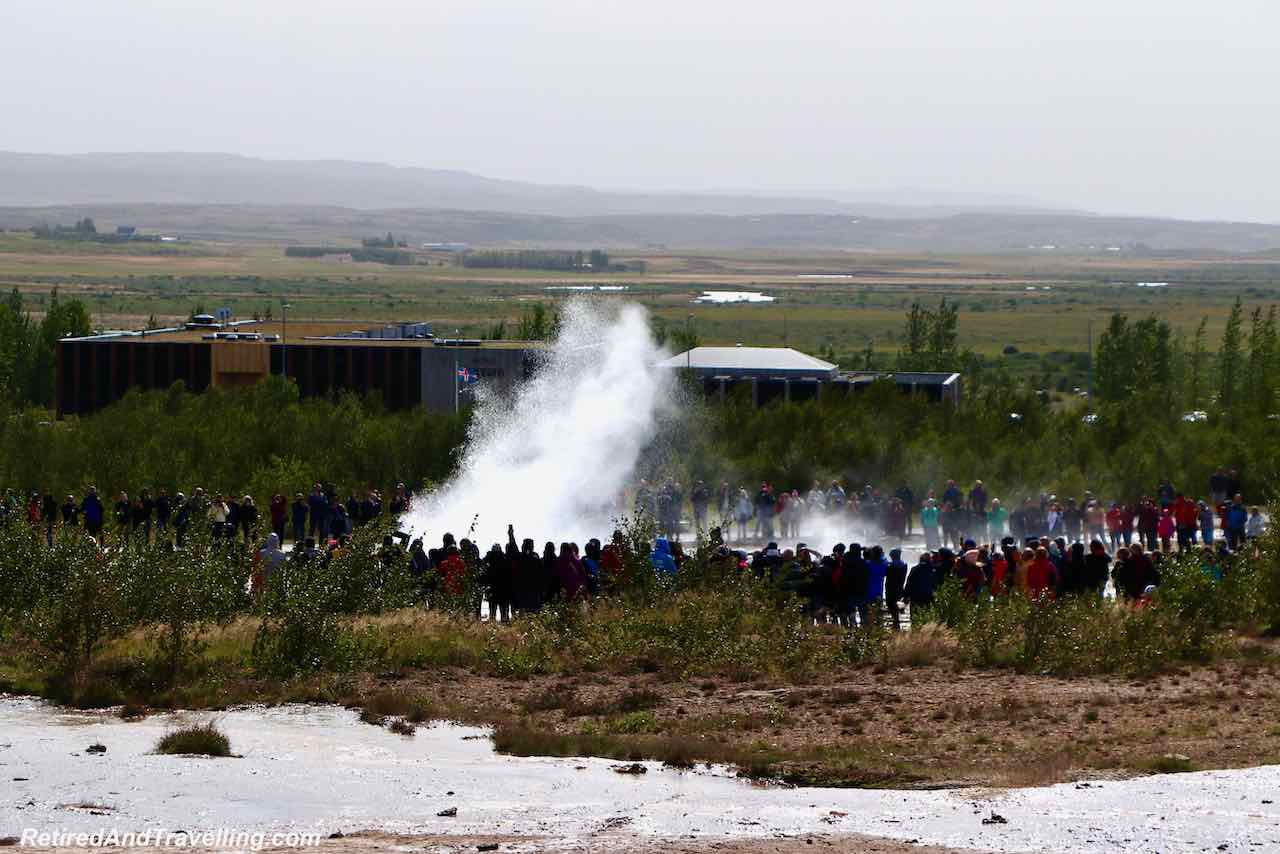 We were happy we saw Strokkur active on our visit to the Haukadalur Geothermal Area. It was great that Strokkur erupted on a fairly predictable timing. Much like we found when we viewed the eruption of Old Faithful at Yellowstone National Park.

A Final Stop At The Gullfoss Waterfall

We saw our first Icelandic waterfall when we toured in Northern Iceland from Akureyri. The Godafoss Waterfall certainly lived up to its name as the “Waterfall of the Gods”. On our Golden Circle tour from Reykjavik, our final stop was at the Gullfoss Waterfall.

There was a path on the top level that went to a point over the waterfall. But we wanted a closer view. So we took the stairs down and walked to the viewpoint out to the Gullfoss Waterfall. The waterfall had two tiers, one a drop of 11m and the lower one was 20m (a total of over 100’) . It was a great spot to get a panoramic view. 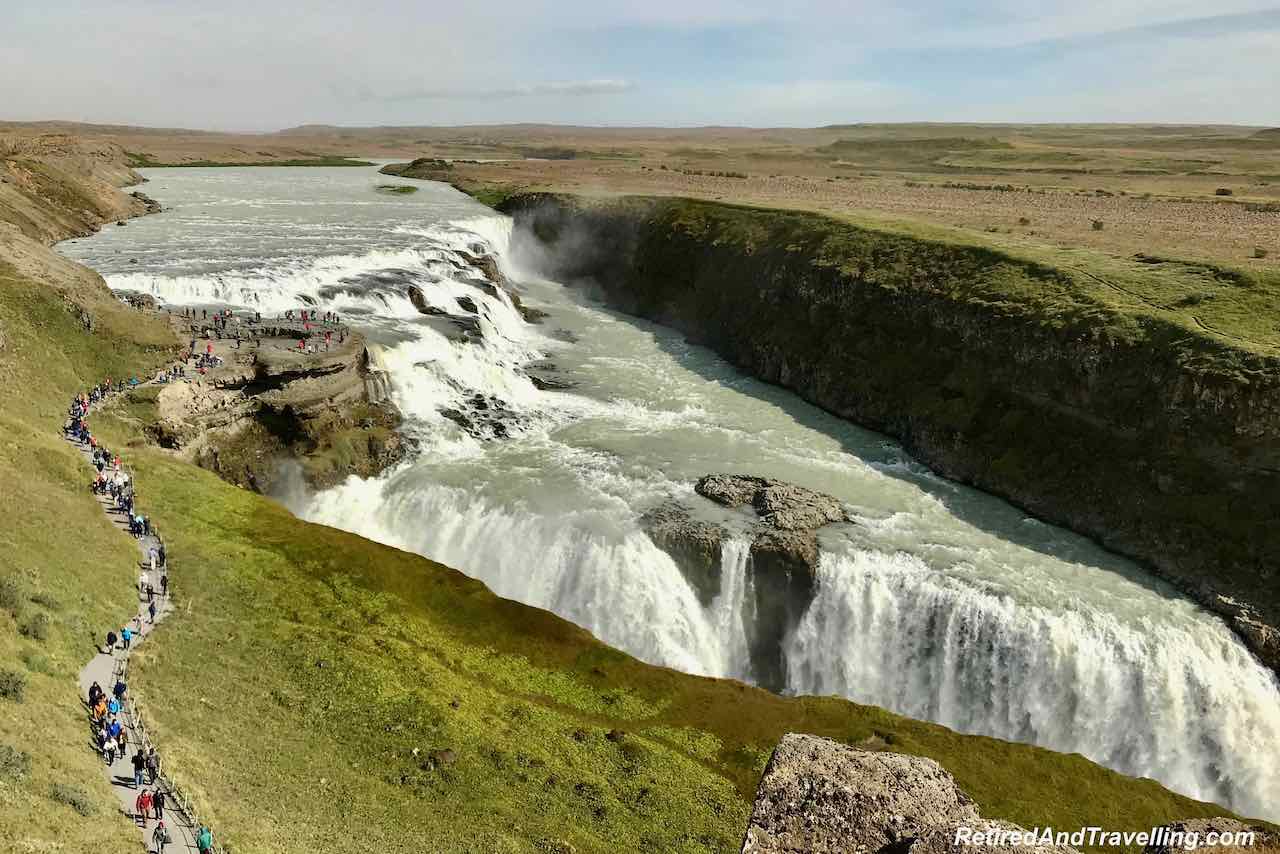 From here, there was a lower path that went to the upper waterfall. And provided a close up view of the water as it thundered over the lower waterfall. 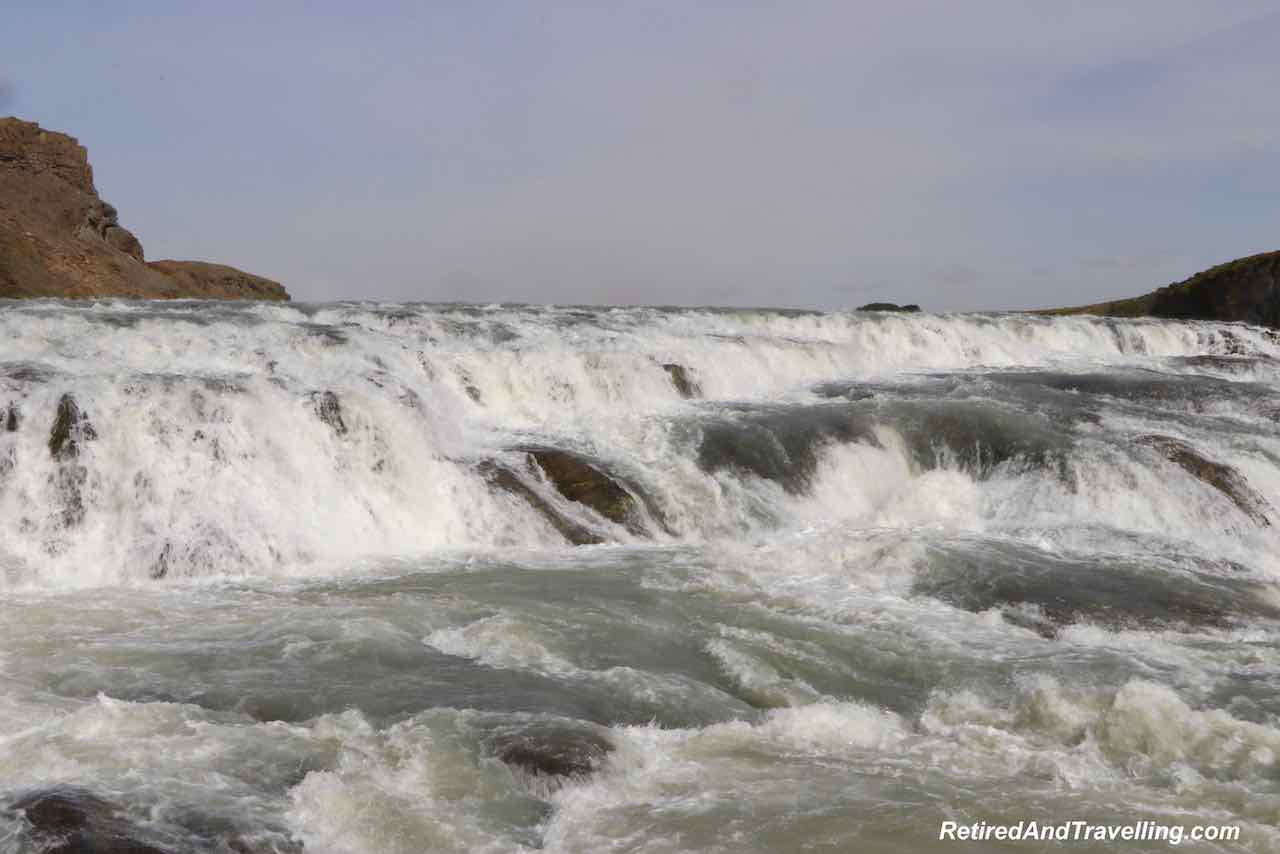 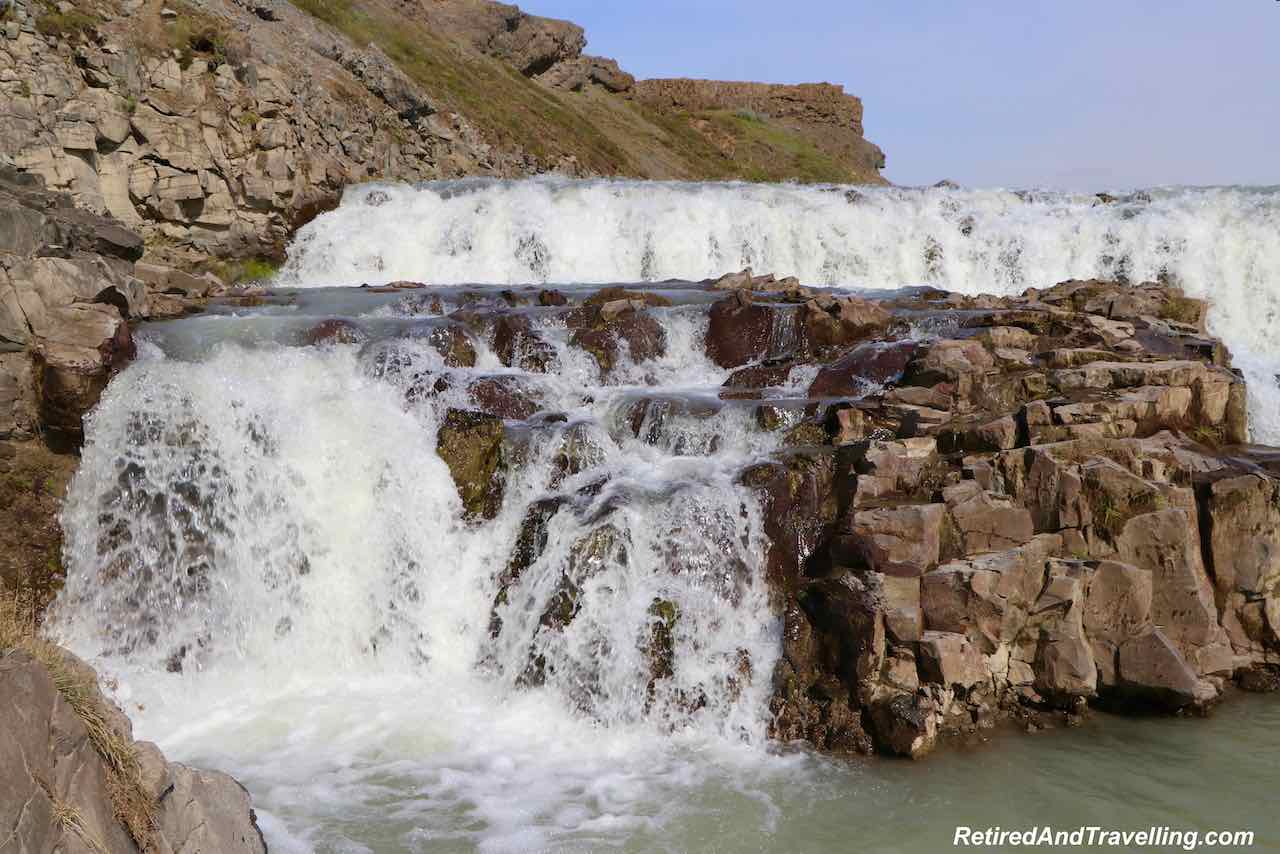 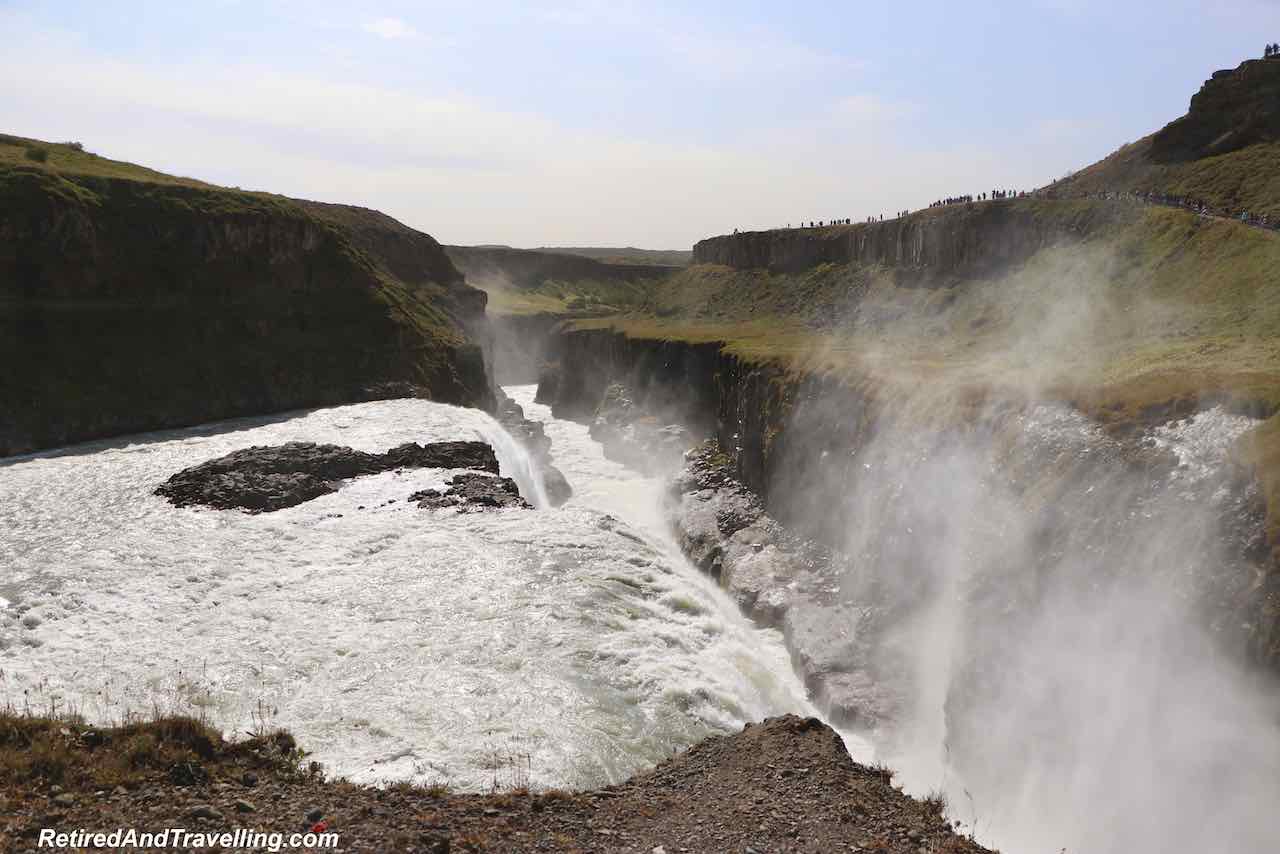 When we returned to the parking area, we caught a view out over the fields to the Langjökull glacier. This was the glacier that fed Lake Thingvallavatn at the first stop on our Golden Circle tour from Reykjavik. 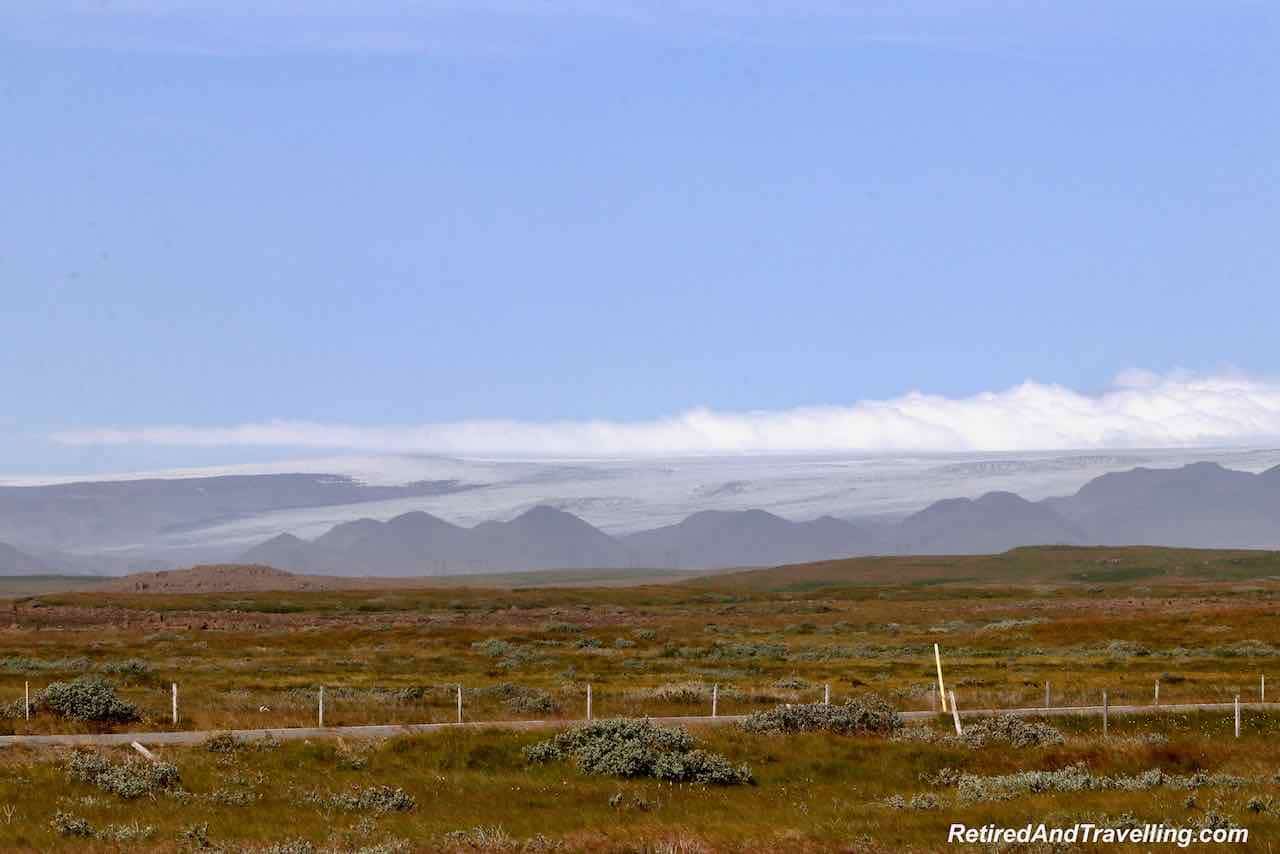 Hot Springs And Earthquakes Around Hveragerdi

We continued our trip around the loop and completed the Golden Circle Tour. There were no more stops. But we kept our eyes peeled as the tour guide provided more insights on Iceland.

We drove through vast lava fields. Volcanic rubble areas were on both sides of the road. Rocks were covered with a fine layer of what looked like moss. In some areas we saw larger sharp rocky areas. 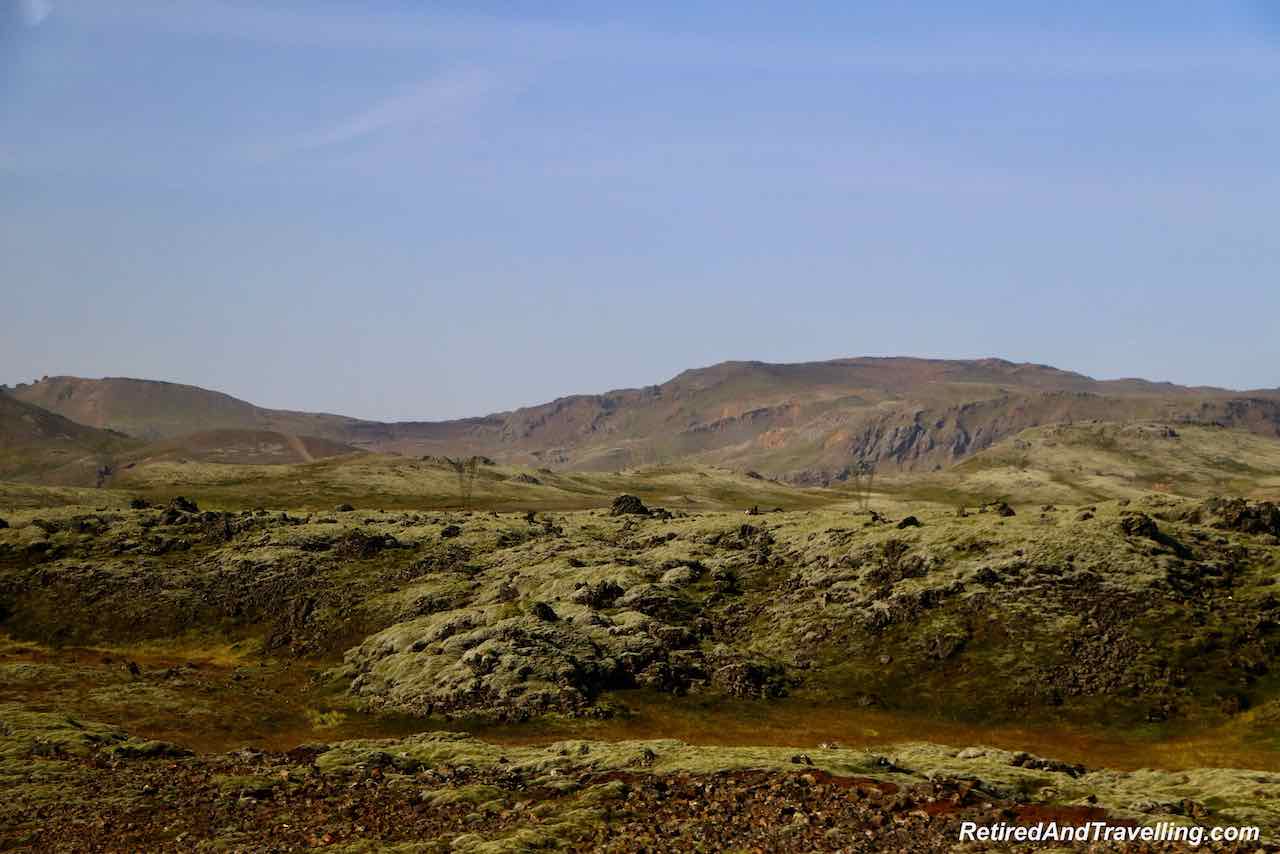 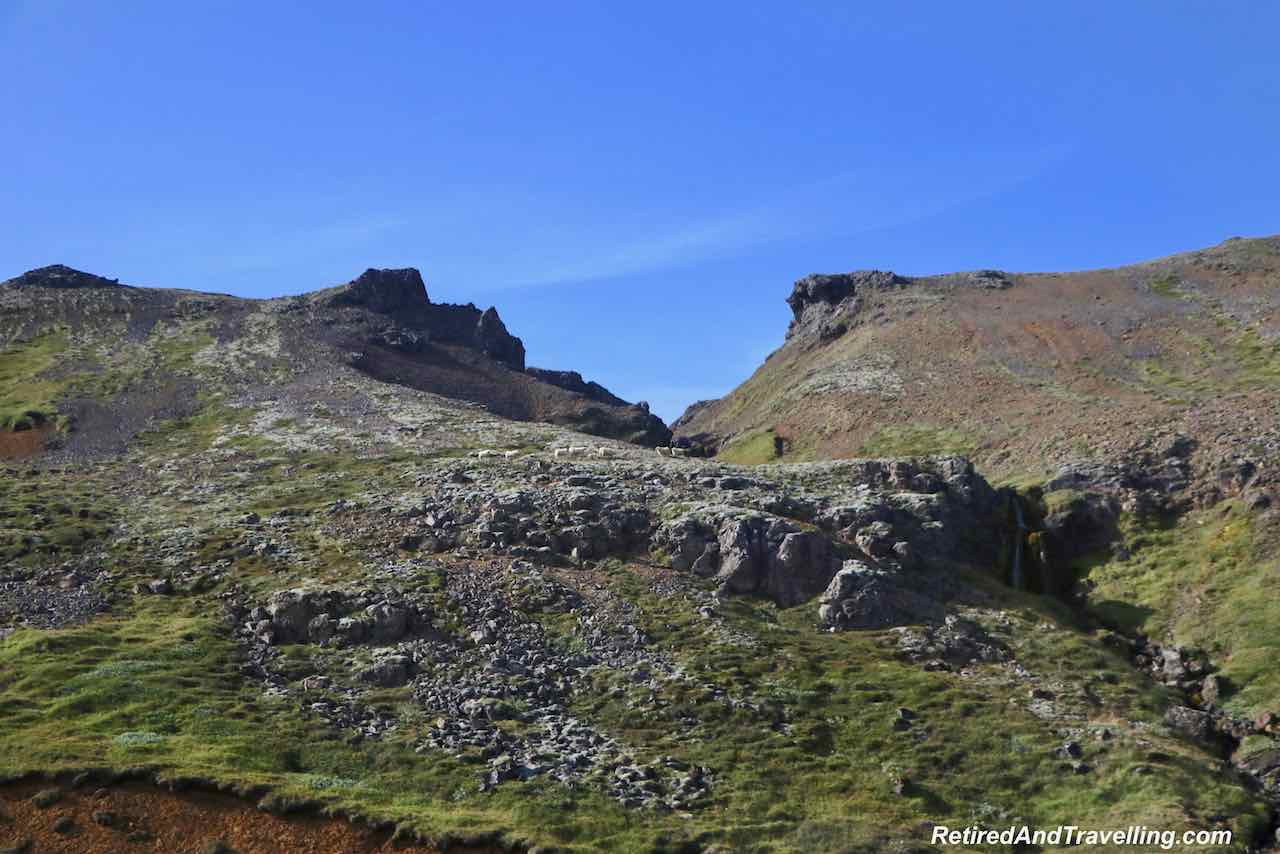 We reached the area around Hveragerdi. Hveragerdi translated to ‘the town of hot springs’ in Icelandic. This area was known for its greenhouses and as a major centre for Icelandic horticulture. Greenhouses were heated by hot water that flowed close to the surface and came out in hot springs. 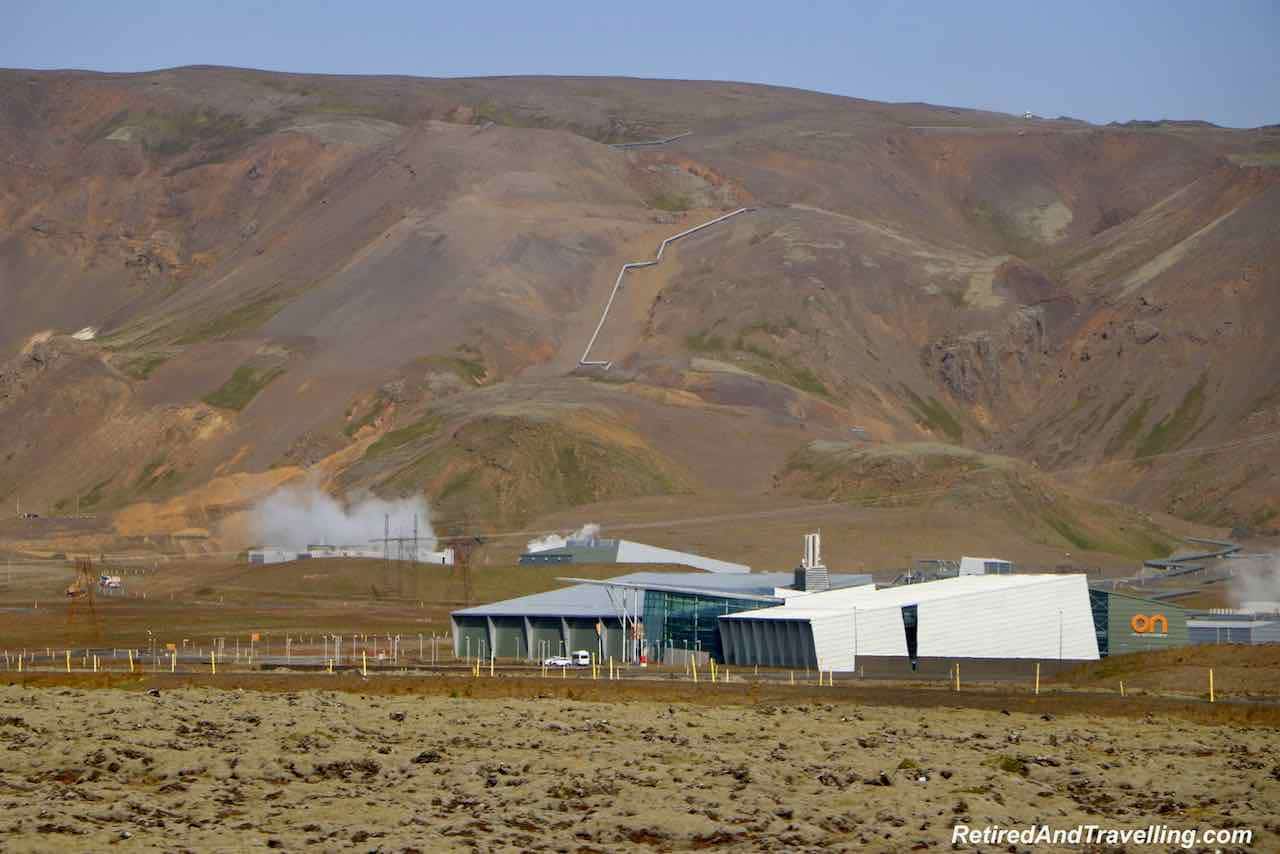 The Reykjadalur (or Hveragerdi) Hot Springs were a geothermal area of hot springs and fumaroles surrounded by untamed wilderness. The water was shallow and wonderfully warm. We considered this as an option to a visit to the Blue Lagoon on a return visit.

Hveragerdi was also known as ‘the Earthquake Town’. The surrounding area was part of the Hengill central volcano. This active volcanic zone crossed Iceland from south-west to north-east. Frequent tectonic movements caused earthquakes in this area. The most recent registered 6.3 on the Richter scale on May 29, 2008.

As we drove, we saw large pipes for steam that ran back to Reykjavik. We were fascinated to learn that nearly all Icelandic homes were heated with renewable energy. 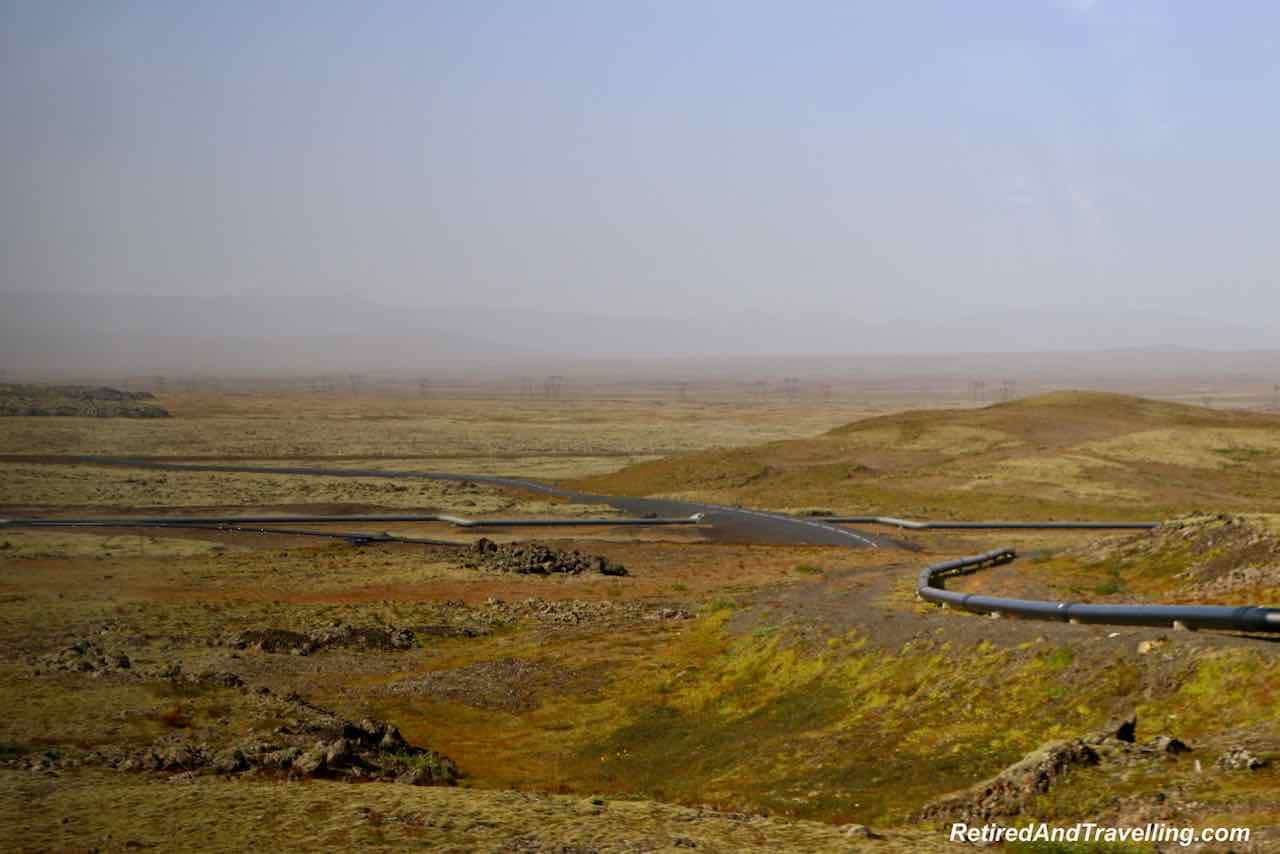 Great Sights On A Golden Circle Tour From Reykjavik Iceland

We were glad we booked the Golden Circle Tour from Reykjavik. We got a great tease with our first view of the natural beauty of Iceland when we toured from Akureyri in Northern Iceland. But it was great to add in the iconic views of the Thingvellir Lava Fields, Haukadalur Geysir Geothermal Fields and Gullfoss Waterfall.

We had three days in Reykjavik. We took some time and enjoyed the city. Our first day trip was this Golden Circle Tour. But we also headed out for another tour and enjoyed more of the amazing sights along the Reykjanes Peninsula.

There were so many stunning waterfalls, volcanic and geothermal sites in Iceland. And we did not see them all!

Did you do the Golden Circle Tour from Reykjavik? What other sights did you see along the way? 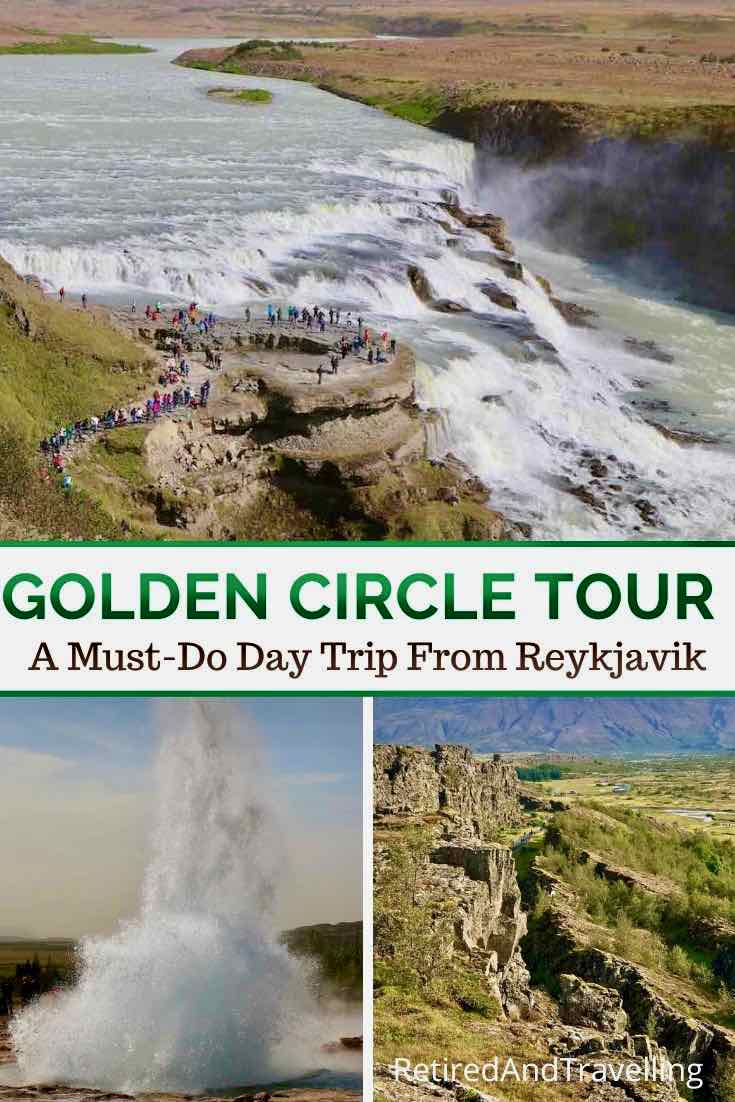 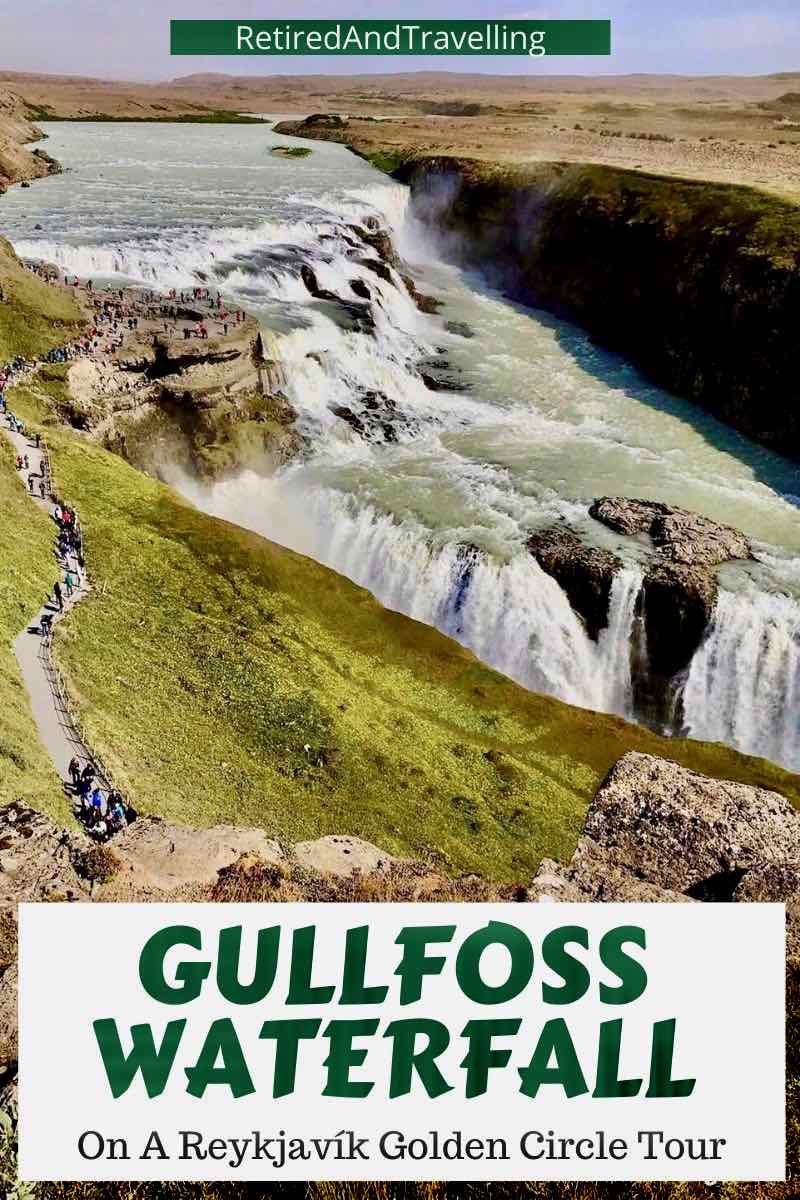 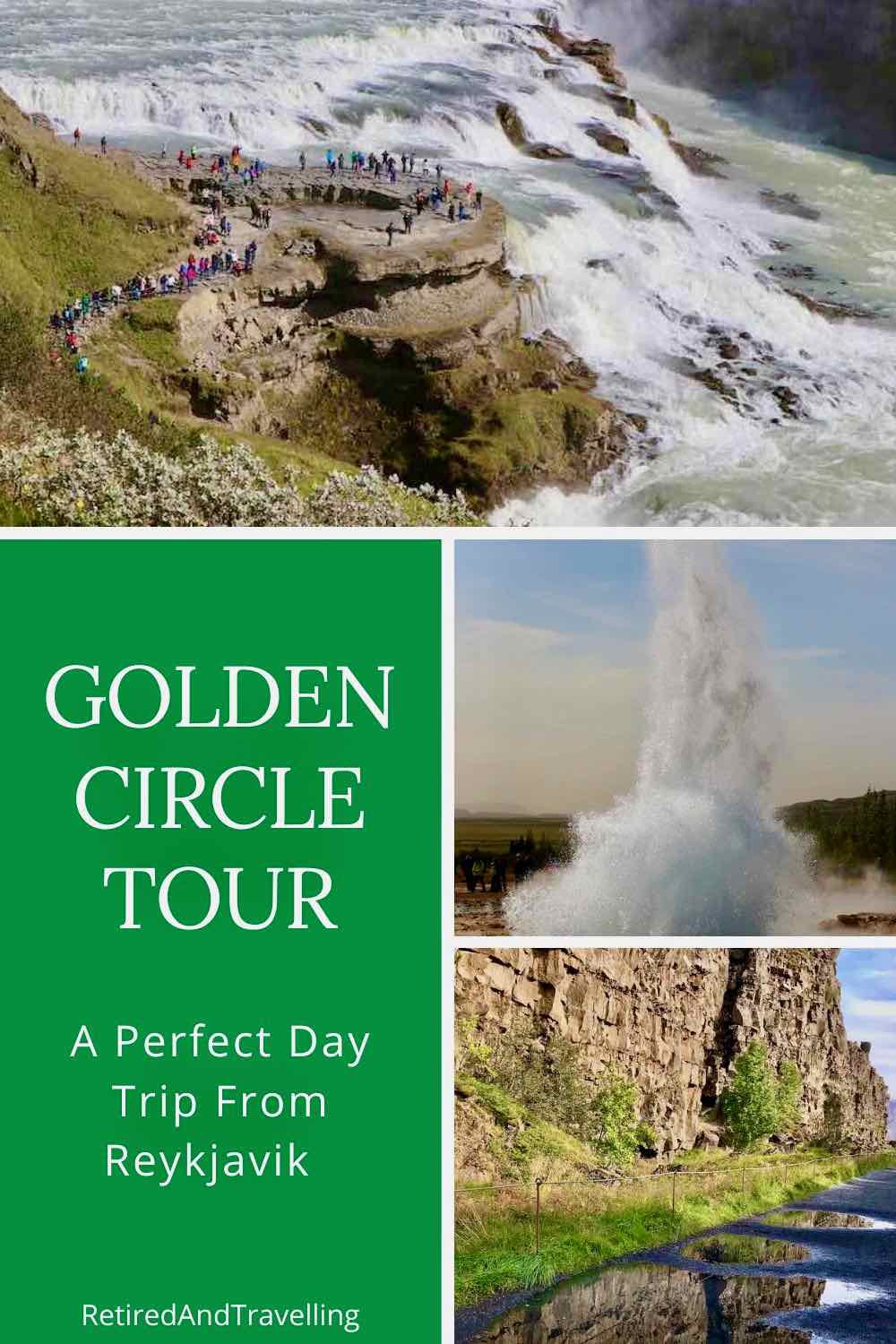 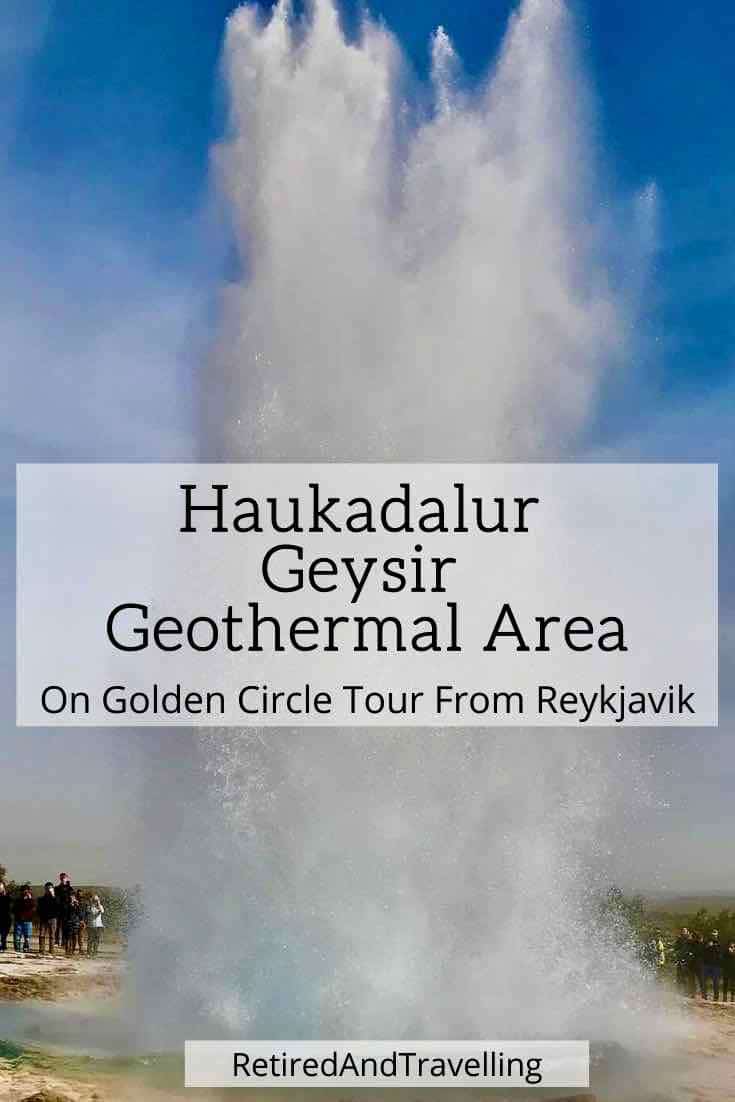