A Relaxing Day at Lake Garda and Sirmione

Lake Garda and Sirmione were on our plans for this trip to Verona.  We had originally planned to drive to see more than the few places where the train stops. Even with the ferry boat linking the villages around Lake Garda, we thought we might want to explore more areas. But unfortunately, we left it too late and there was nothing but commercial vans available for rent at the train station. We found it surprisingly hard to get a car rental on short notice as we travelled this time. It appeared that travelling through the much smaller cities and towns left us with less choice – so pre-plan accordingly!

A Day Trip From Verona With Pagus Wine Tours

Instead we considered several different options available through Pagus Wine Tours. I was oncerned that David would not enjoy the red wine tour – even if he tasted expensive Volpollicello or Amarone wines.  So we debated either a pure 3 stop Lake Garda tour or a tour which would give us a taste test of Lake Garda with a wine tour. We opted for the latter.   And we caught grape harvesting in action!

The online reservation system did not give me an electronic ticket.  But a quick email to Alessandro assured me we were booked and paid up. He told us to meet “in front of Castelvecchio near the statue beside the bar with the tables outside”.  How unique a spot would that be in Italy?  As it turned out, at 9am there was only one such option.  And it was easy to spot the Pagus van when it arrived. 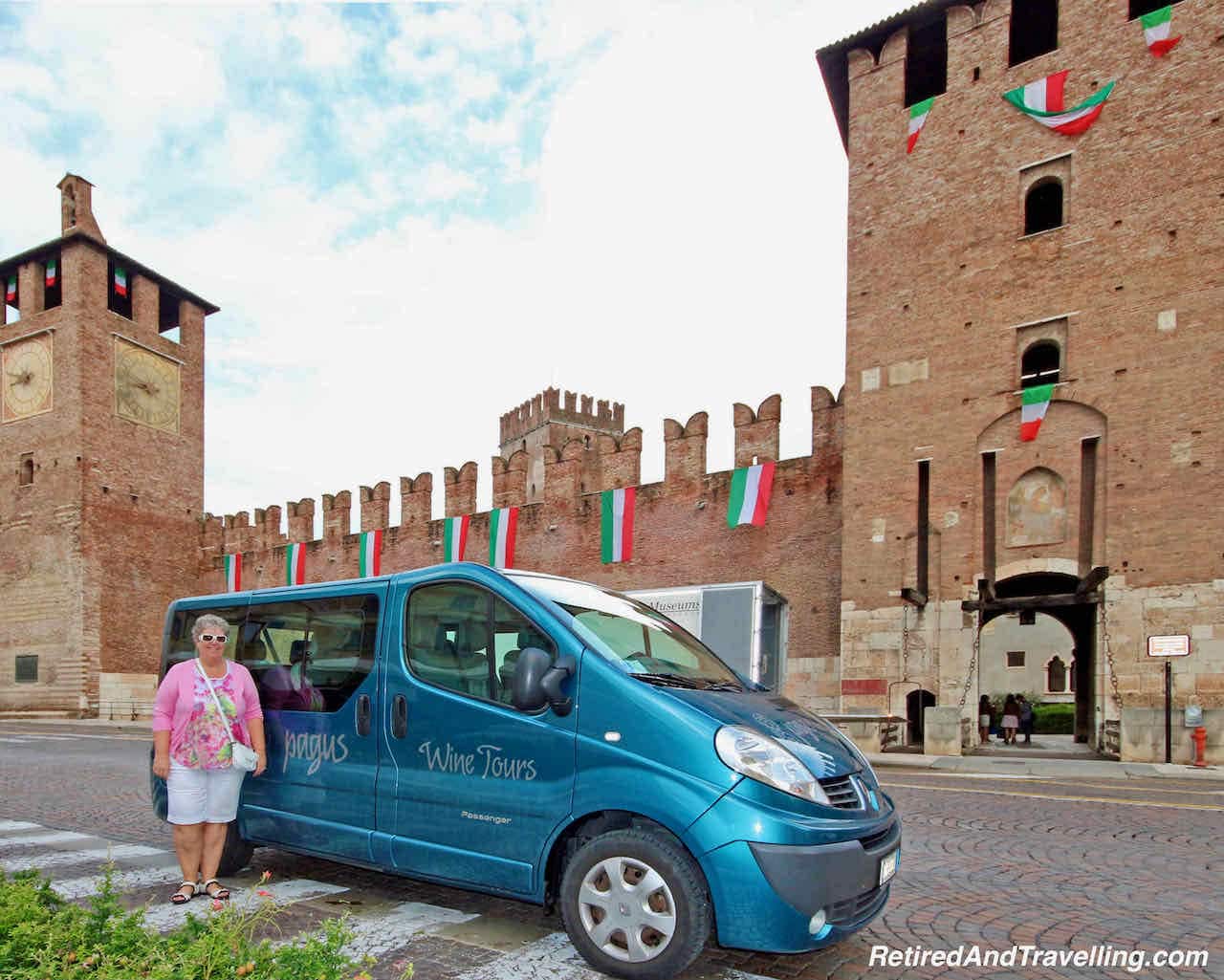 The online reviews about our tour guide Davide were great and we were not disappointed. As a geography and history teacher he had a wealth of knowledge that he shared during the ride and through the tour. With only one other couple (in an 8 person van), we got answers to almost any question we had.  Because the tour was not full, Davide invited a friend of his to photograph and video the trip. I am sure that somewhere in the fine print on the booking site we gave them the right to make us stars in their new advertising!

The Resort Town of Sirmione

It was a relatively quick 30 minutes to Lake Garda and the resort town of Sirmione. We got there just ahead of the tourist crowds.  Davide secured a boat for a trip around the tip of the peninsula which would allow us to see the roman ruins and the castle from the water side.  The roman ruins used to be a roman spa which took advantage of the thermal water springs in the area. 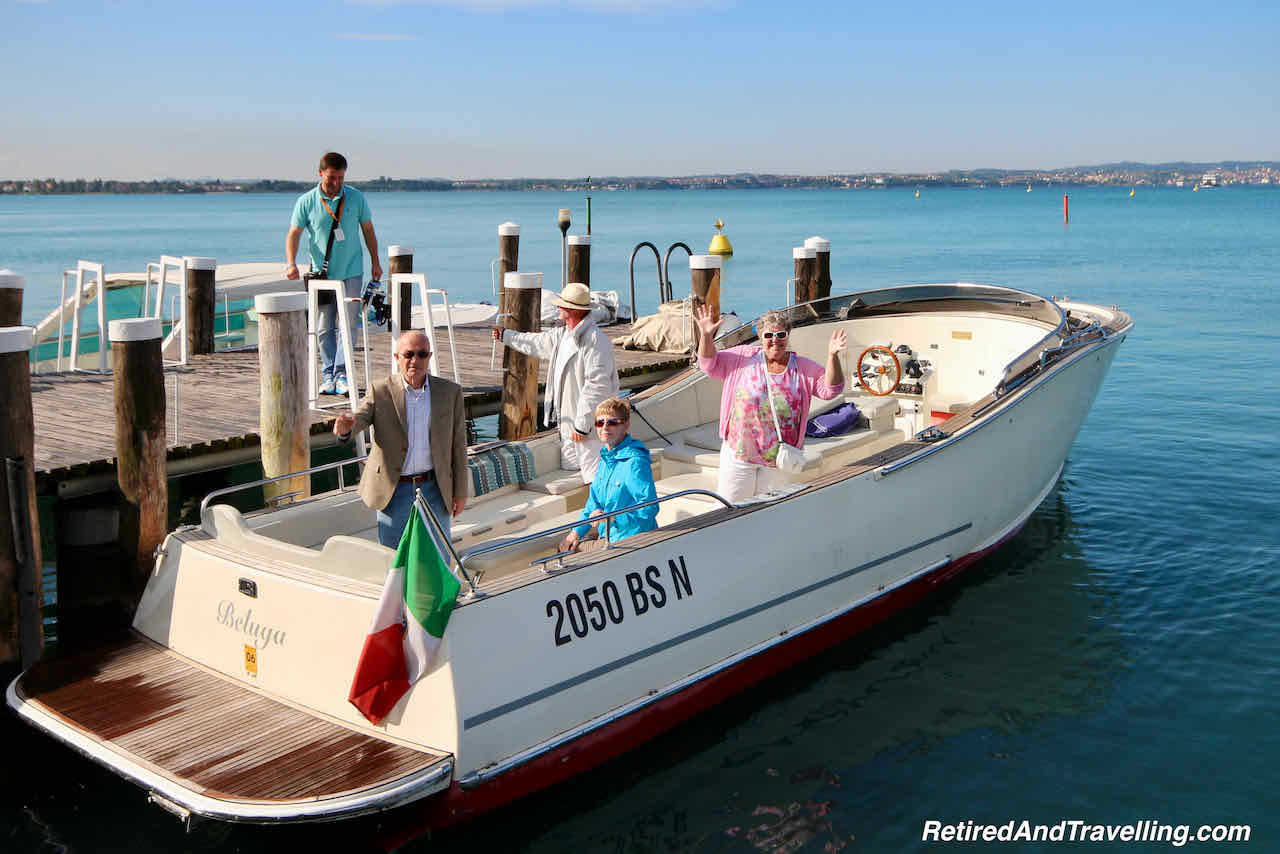 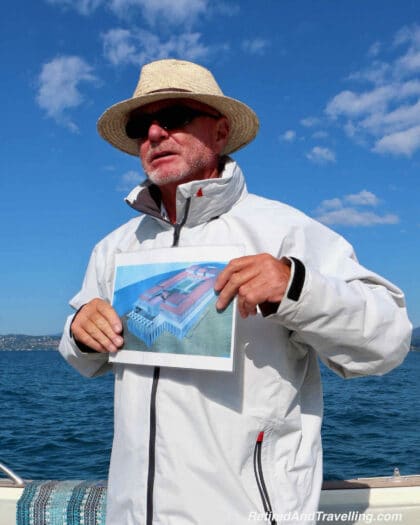 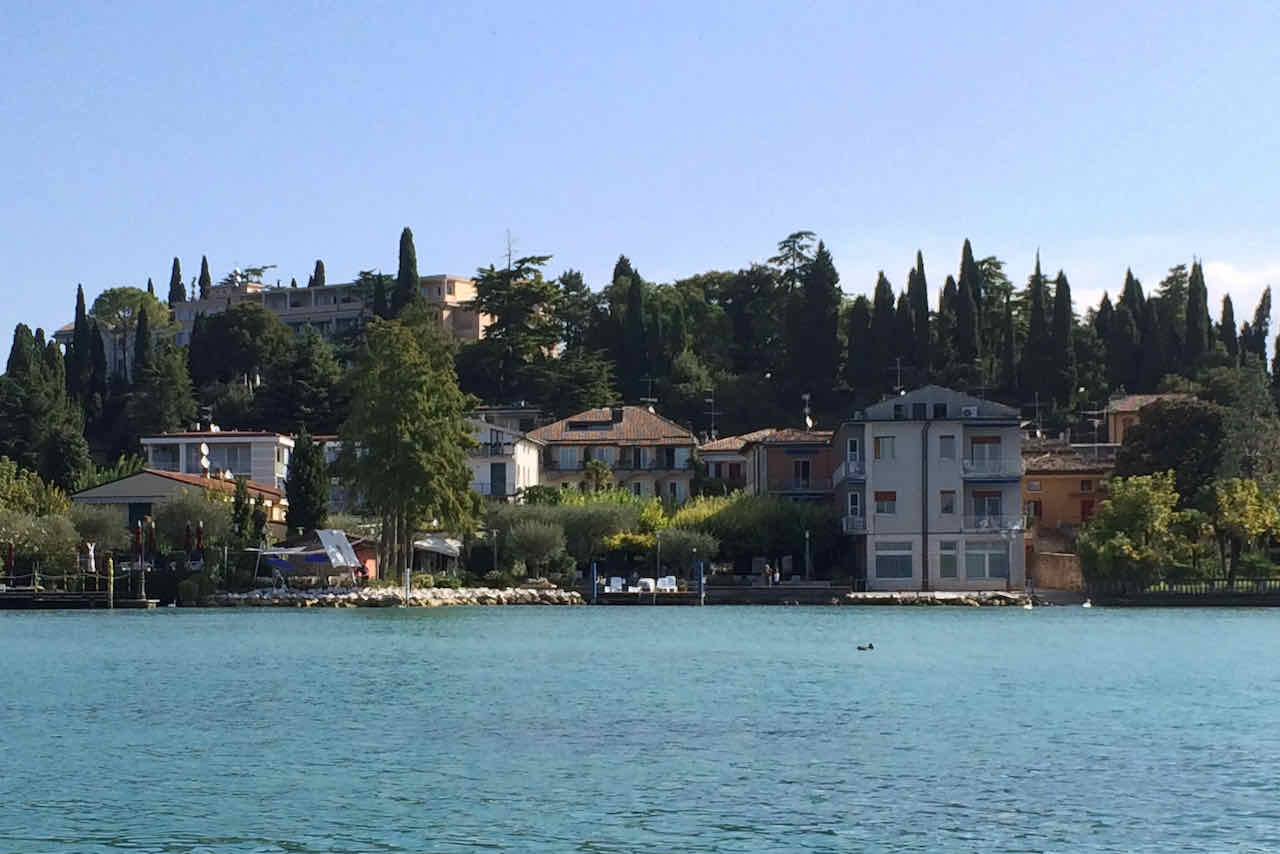 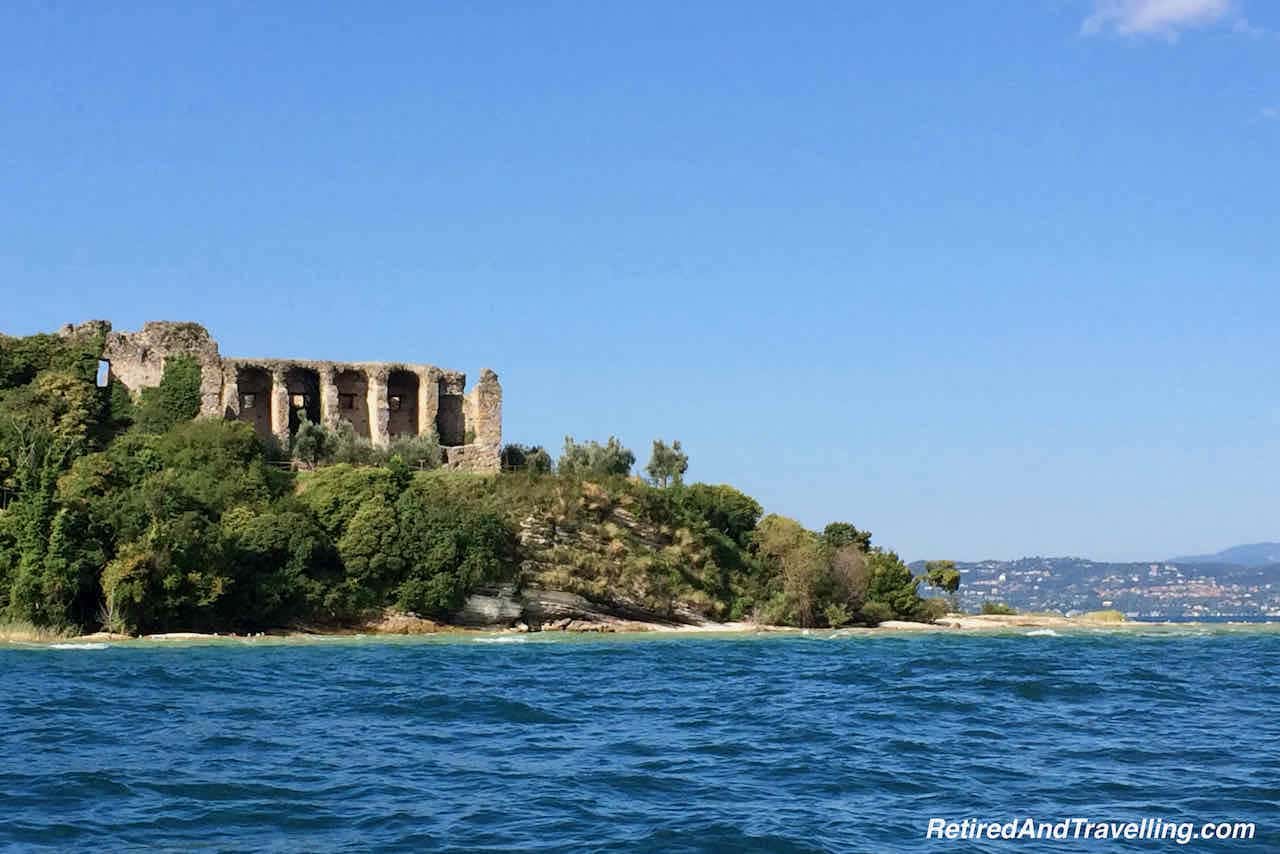 When we looked north, we saw the mountains that ringed the lake as the mist rolled out. Apparently fog in this region was a common occurrence. 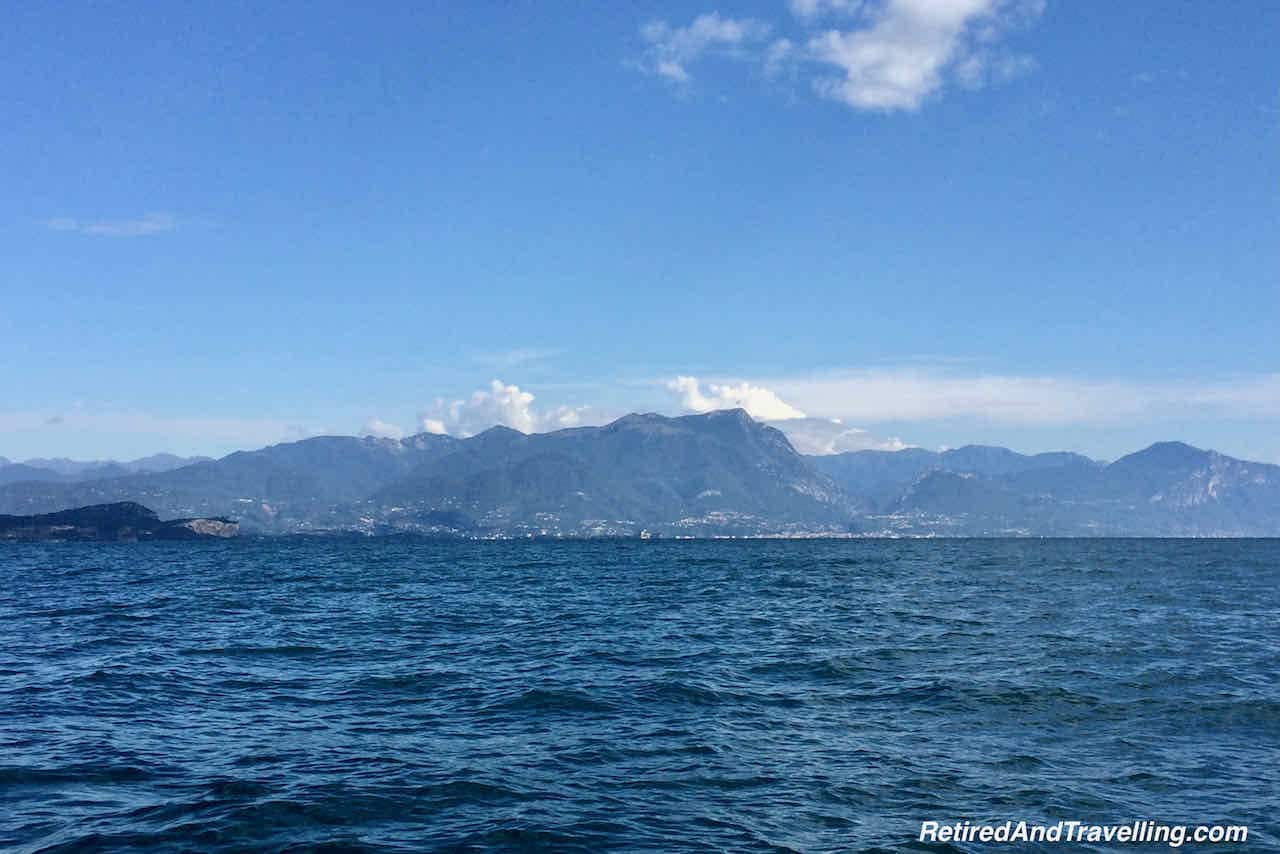 Our boat skipper even took us over the underwater line that feeds the famous hot spring waters to Sirmione.  The bubbles floating up from the line were easily spotted. Apparently, you can get a doctor’s prescription to get free treatments for a variety of ailments.  Or find one of the many spots where you can pay.

It was great to get the perspective from the water.  We saw the old castle from all sides as we took the boat around Lake Garda and Sirmione. 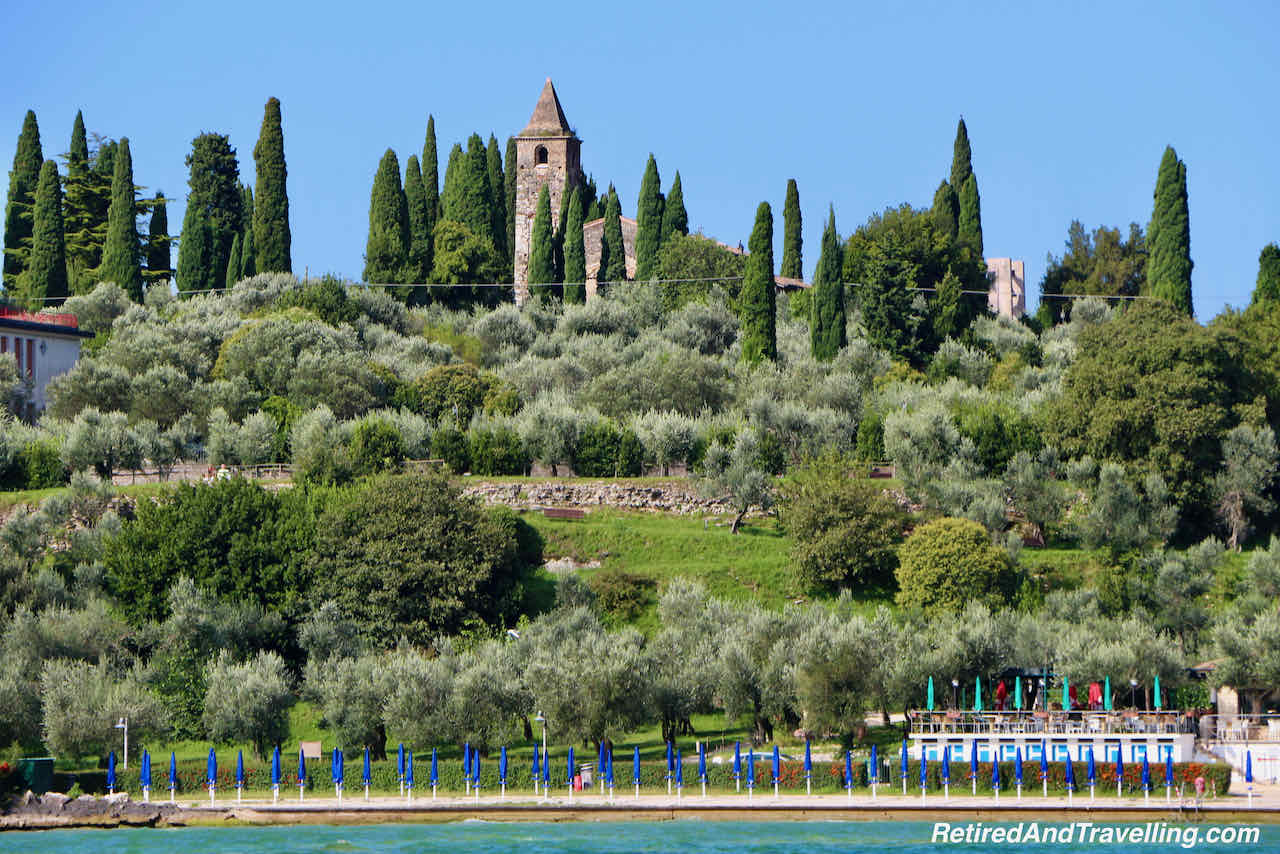 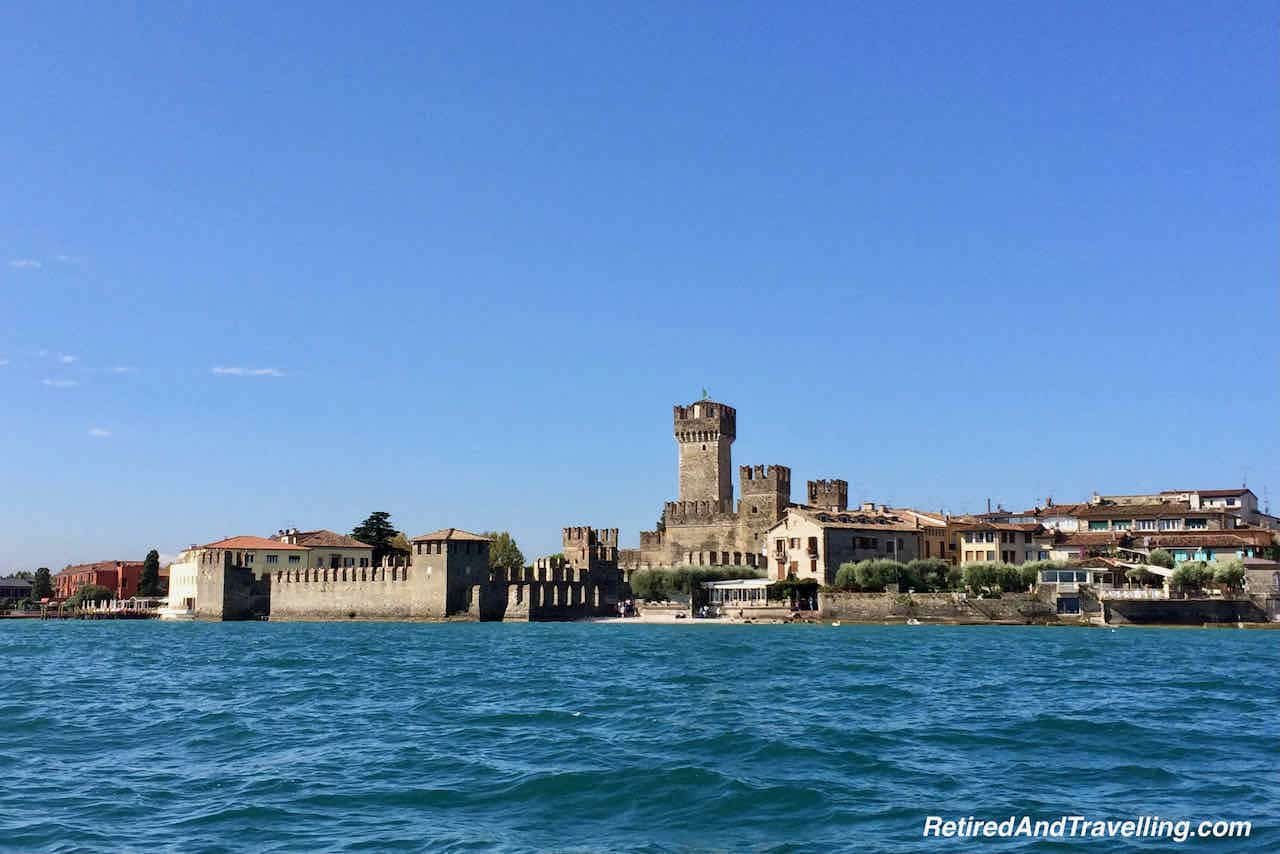 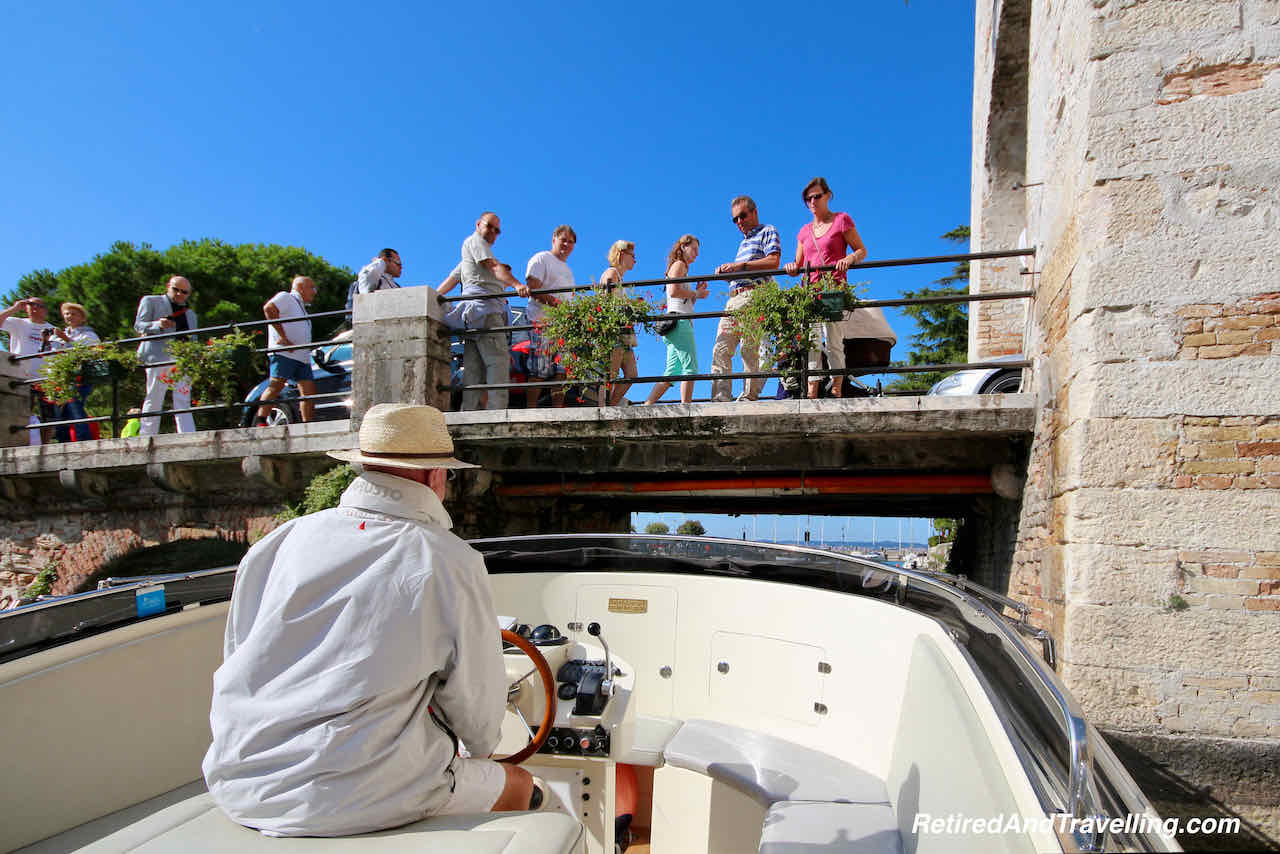 Returning back under the castle bridge, we alighted for a walk around the town. Outside the gate we found fresh produce from the stall vendor. 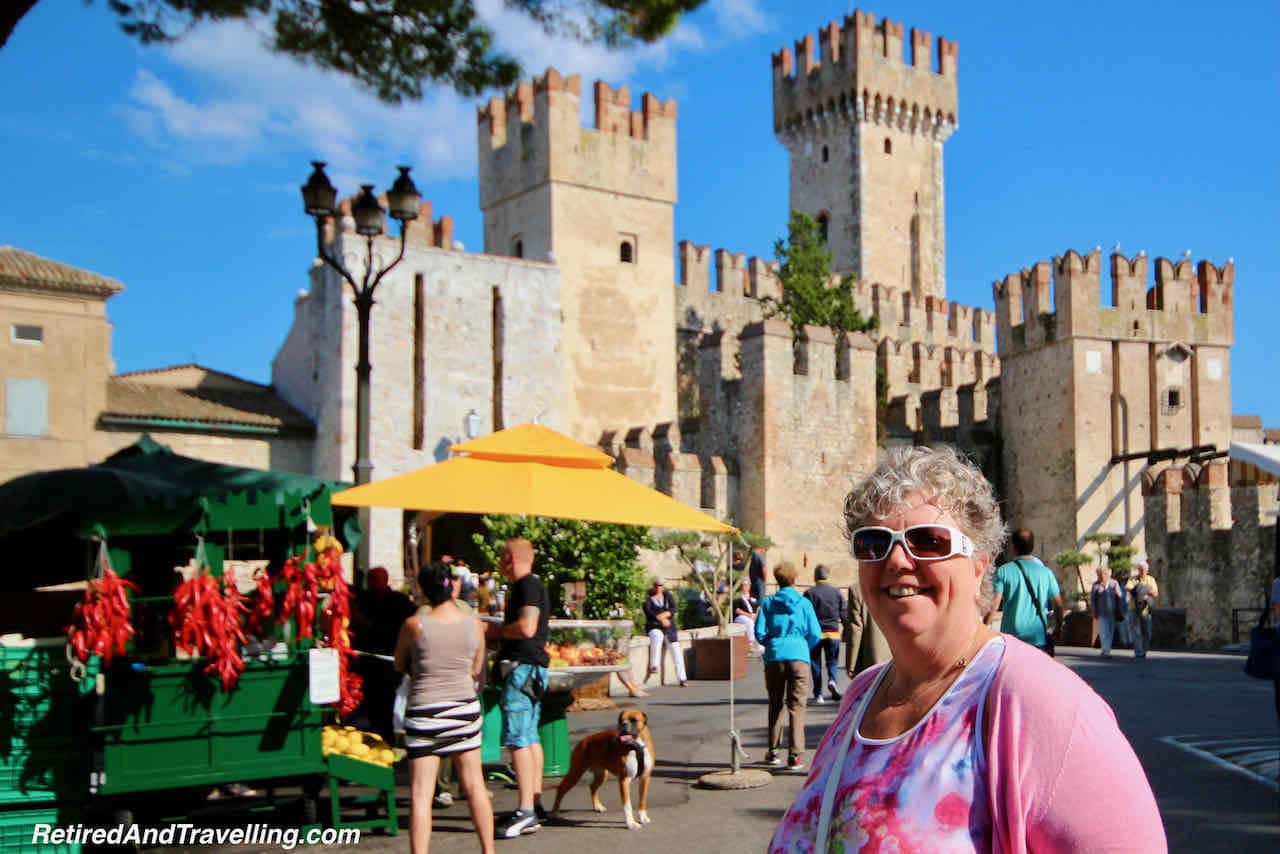 By now the tourist traffic had picked up.  But we were undaunted as we set off to see the castle and the local church. 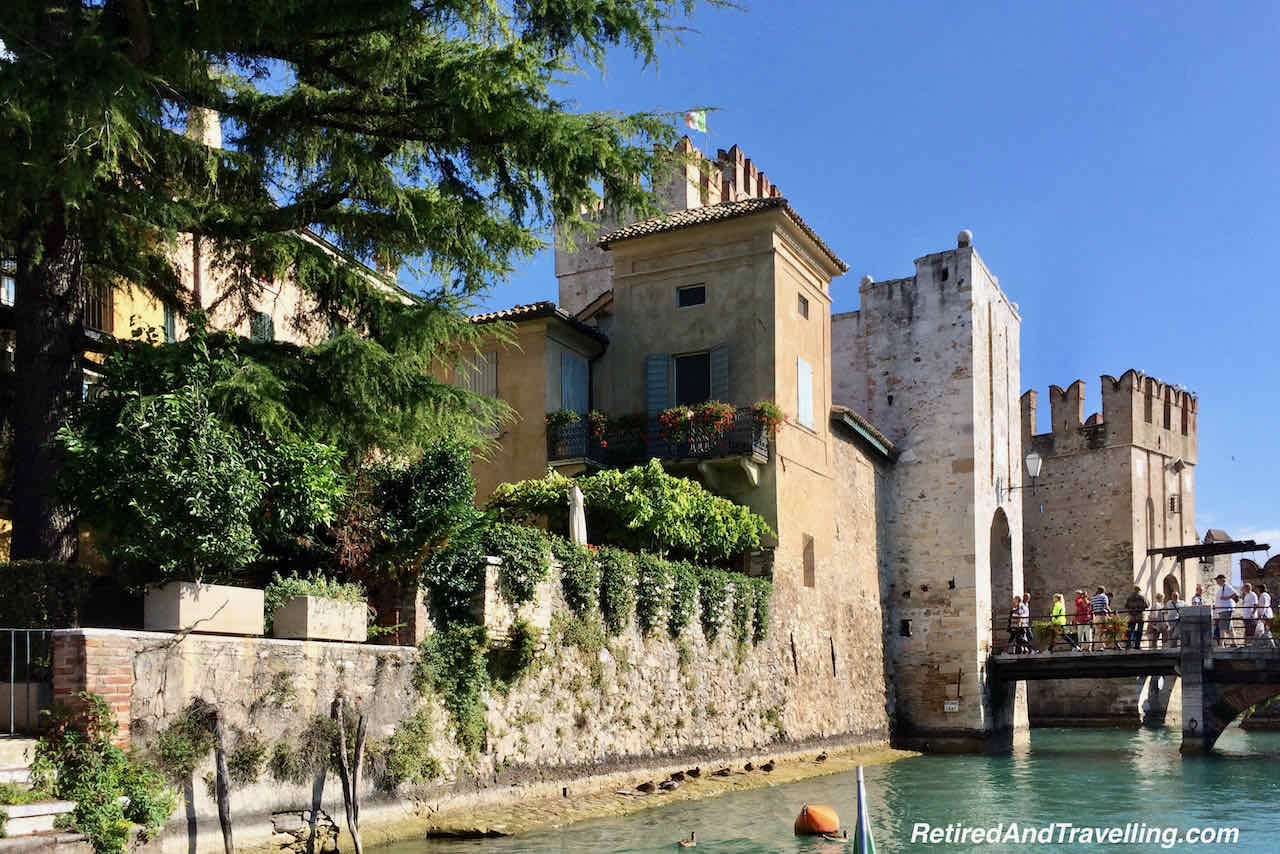 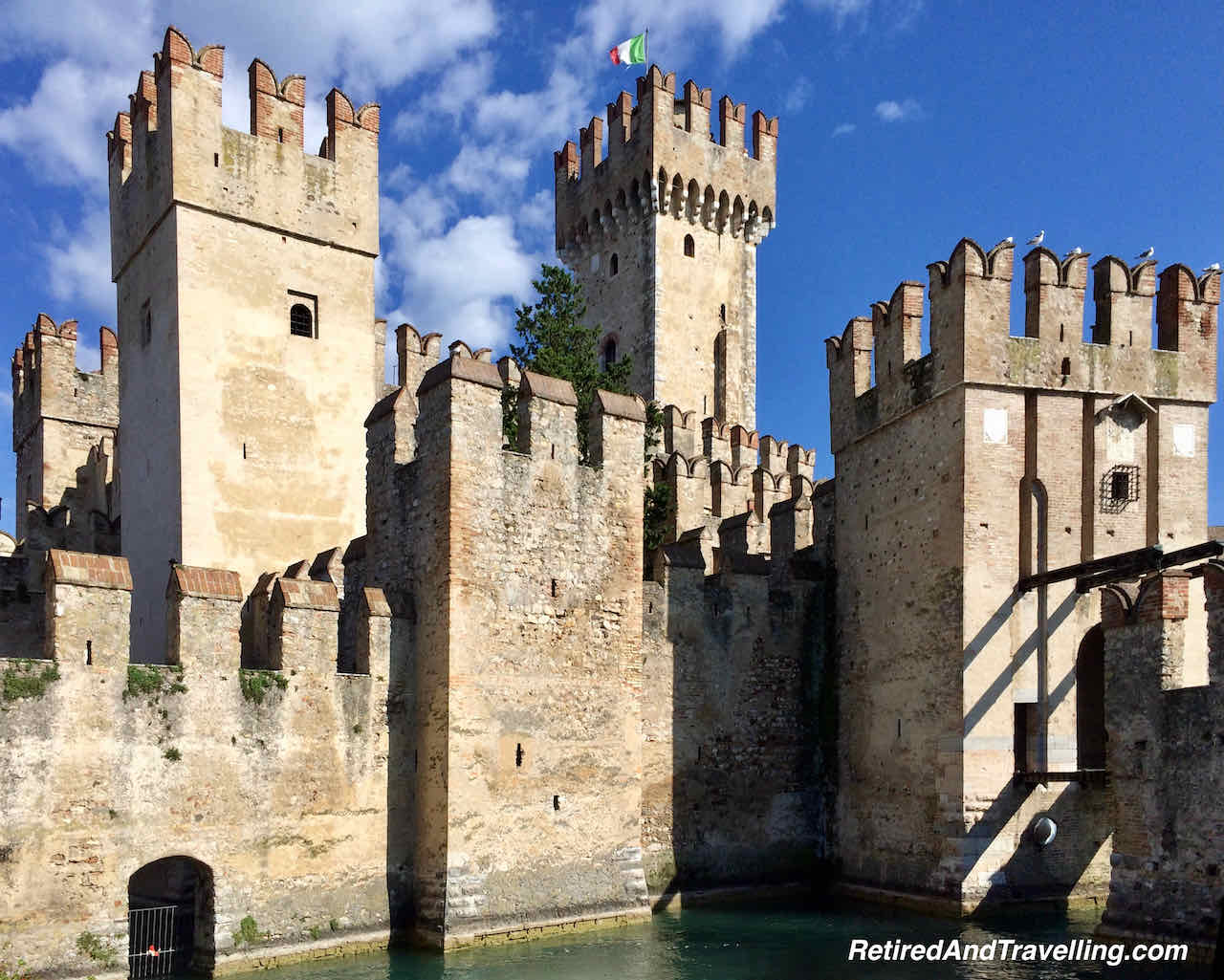 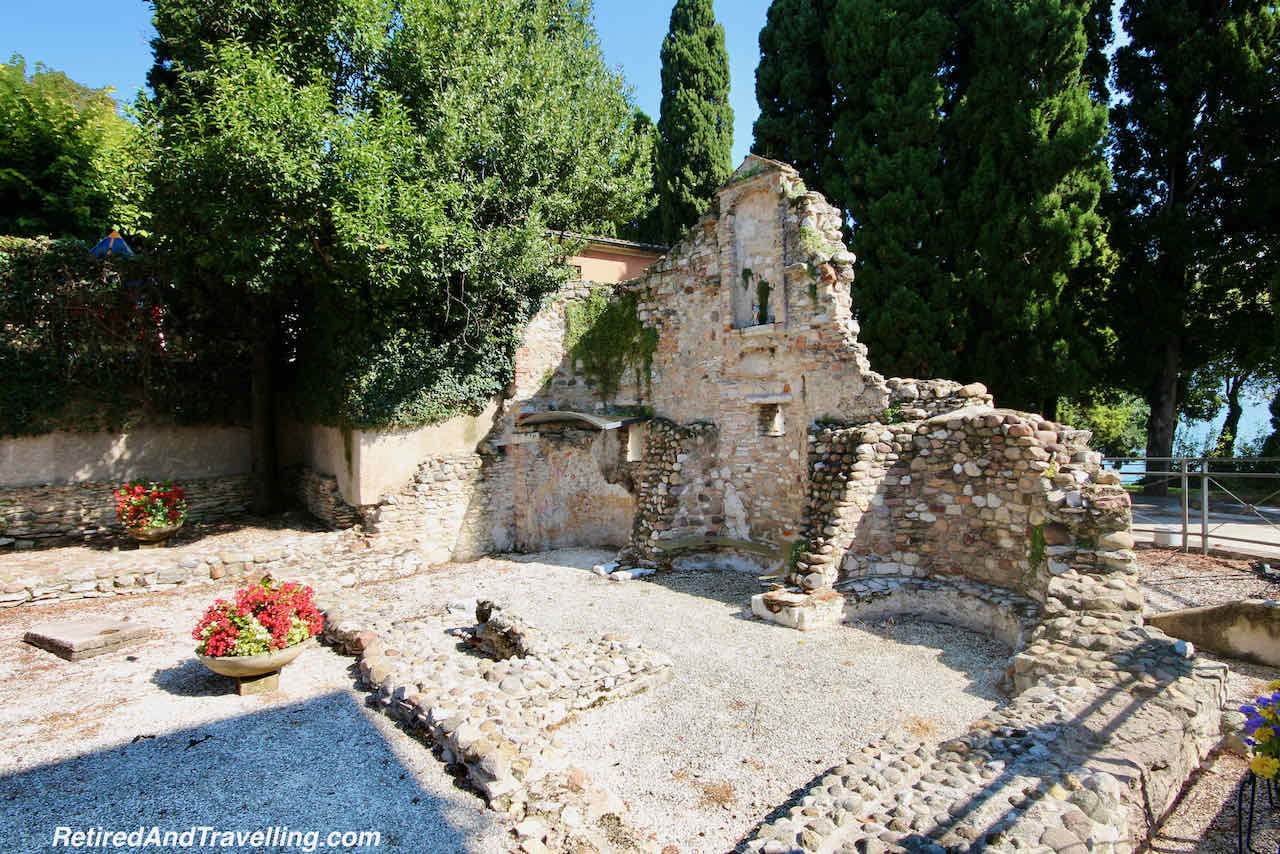 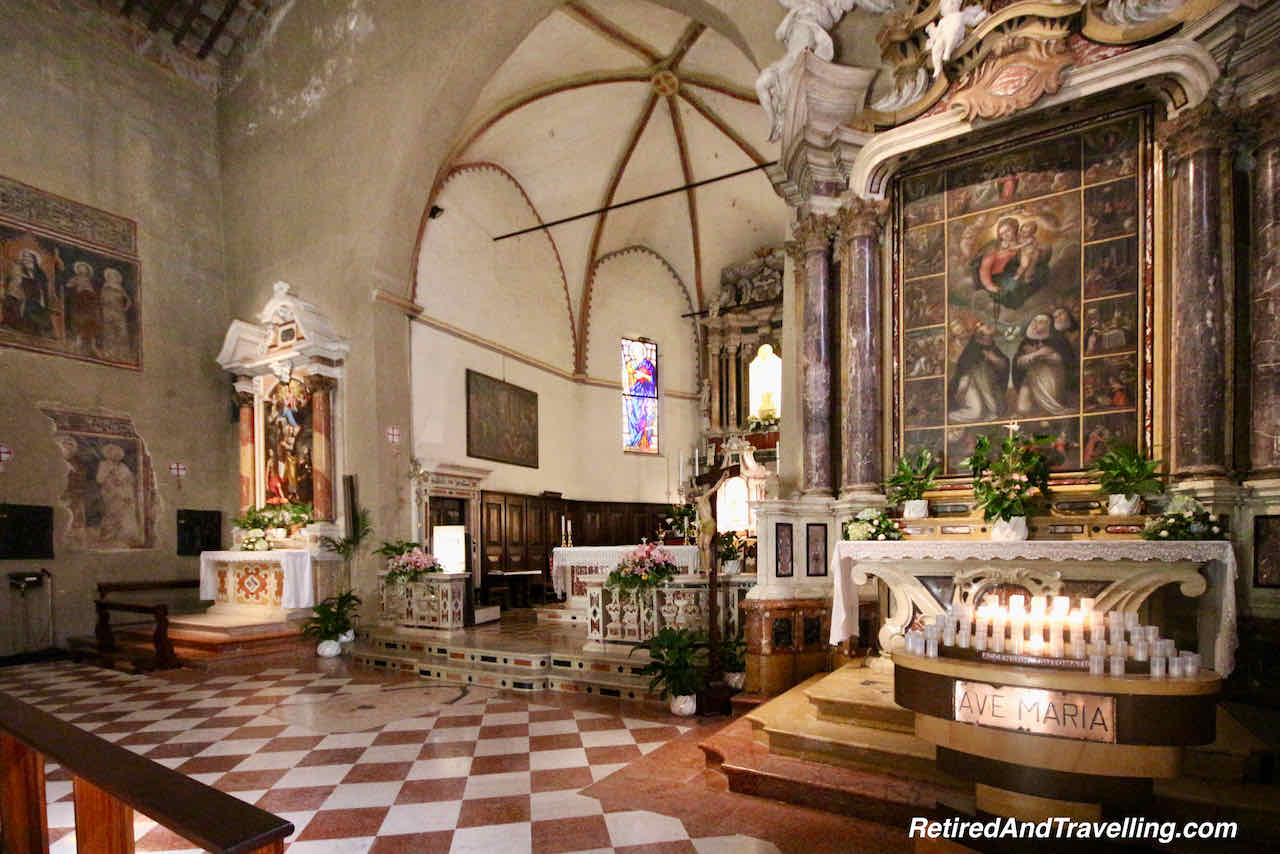 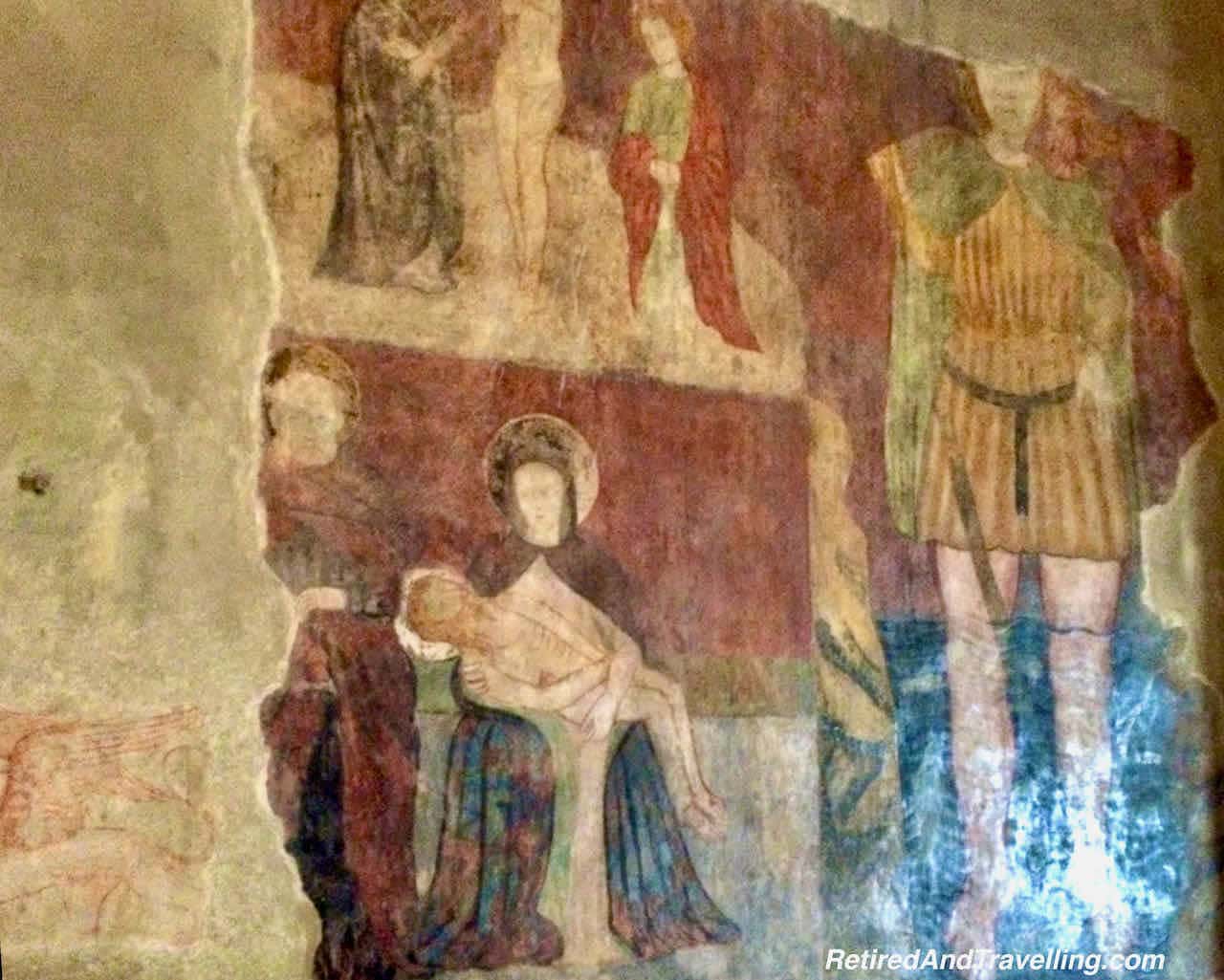 The town streets were narrow and packed with a variety of stores and restaurants. 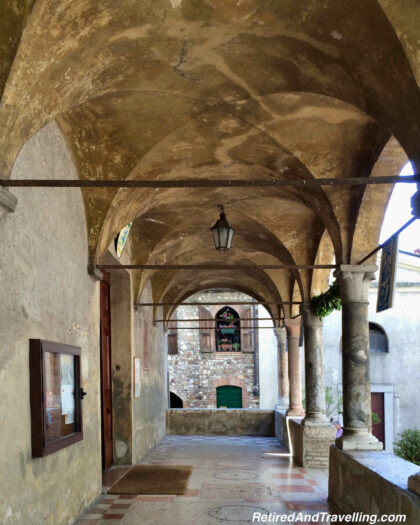 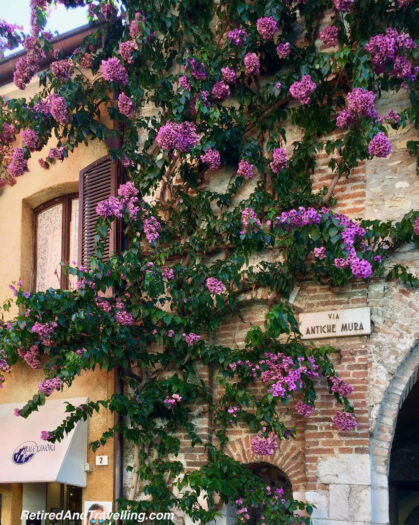 A Great Day At Lake Garda And Sirmione

It was a great quick view of Lake Garda and Sirmione. Davide said the mountain water got warm enough in September to swim, so maybe we would come back on a return visit.

We were off for the second part of our day tour to visit the Lugana wine region!  A great way to finish this day trip from Verona.

Did you take the thermal baths when you visited Lake Garda and Sirmione?  What is your favourite town on Lake Garda? Did you day trip or spend more time there? 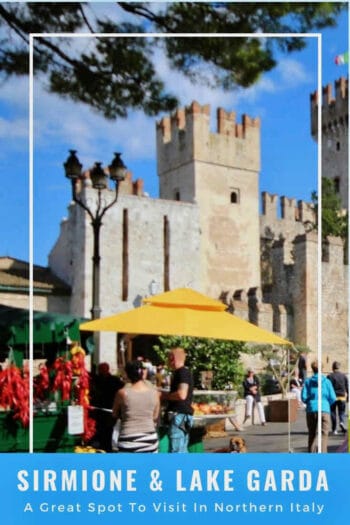 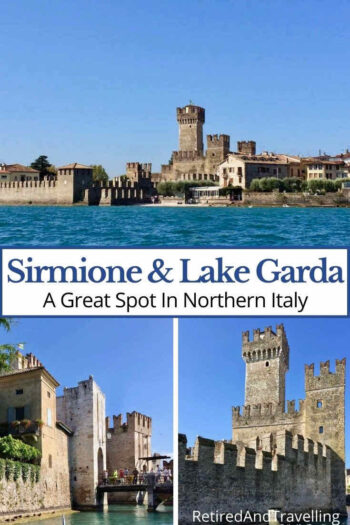 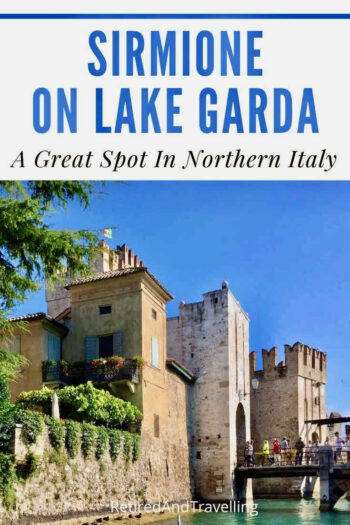