It was a quick train trip (90 minutes) from Verona to Bologna.  But since we were travelling on Saturday we thought it might be busy.  So we decided to pay the extra premium for 1st class train tickets. It was a waste of our money – but that is the tale for another blog.

We were delighted to be able to check into our hotel when we arrived.  And even more pleased with our hotel choice (Aemelia Hotel) close to Bologna Old Town. Our B&B stay in Verona had been ok.  But it was nice to be able to have a larger room and many comfortable spots around the hotel to lounge.

Our room on the 6th floor (below the patio deck with the tepid hot tub) had an awesome view of old Bologna and the setting sun. With the profusion of red brick, we could certainly see why Bologna was sometimes called the “Red City”.  Located about a 10 minute walk from Porto San Vitale (one of the 12 gates into Bologna Old Town), we had lots of chances to explore this new city. 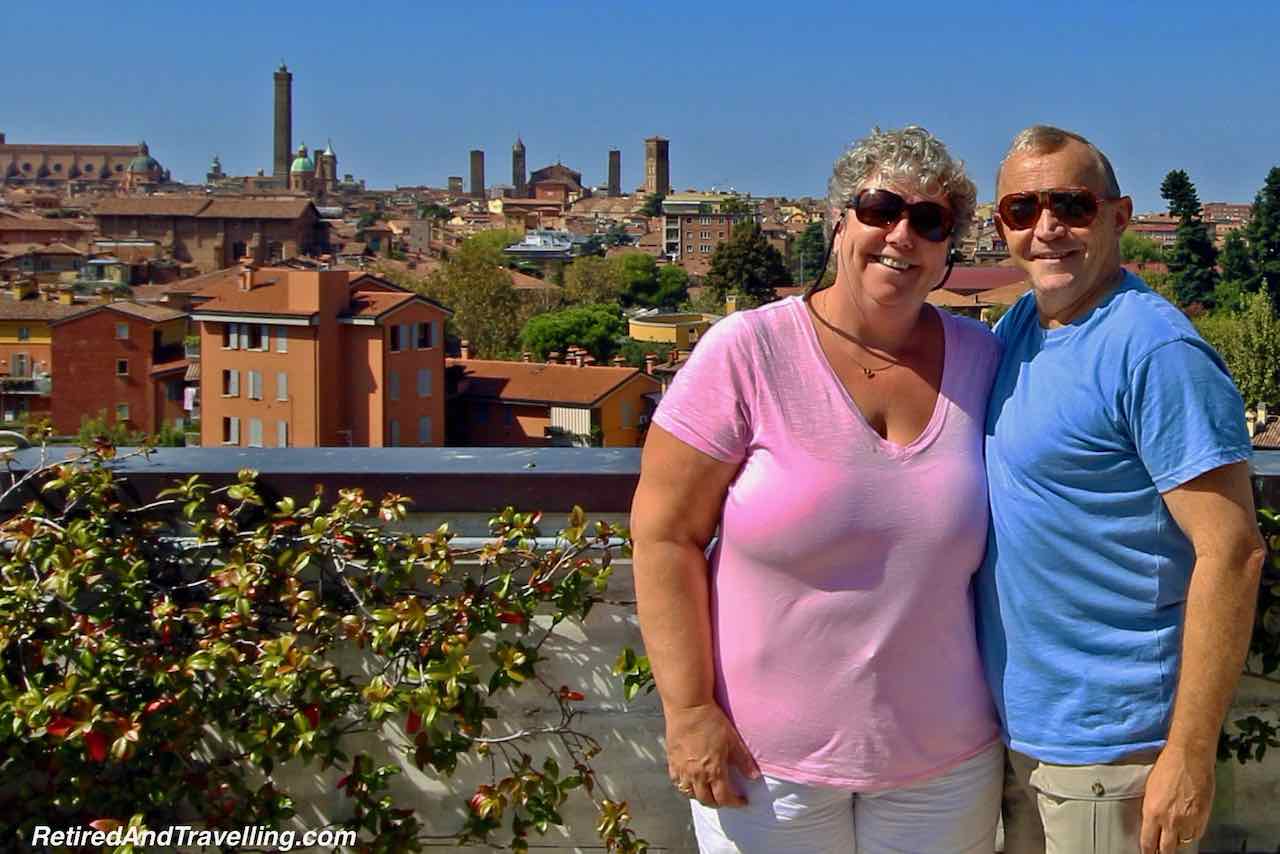 Several different days we headed into old town.  While we started with a reasonable time limit in mind, we ended up crawling back to the hotel with throbbing feet and legs. Each new corner of the old town provided yet another new site to explore. We tried a couple of the different ancient portals that let you into Bologna Old Town. In some cases only part of the old portal remained.  But it was still obvious where the gate had been. 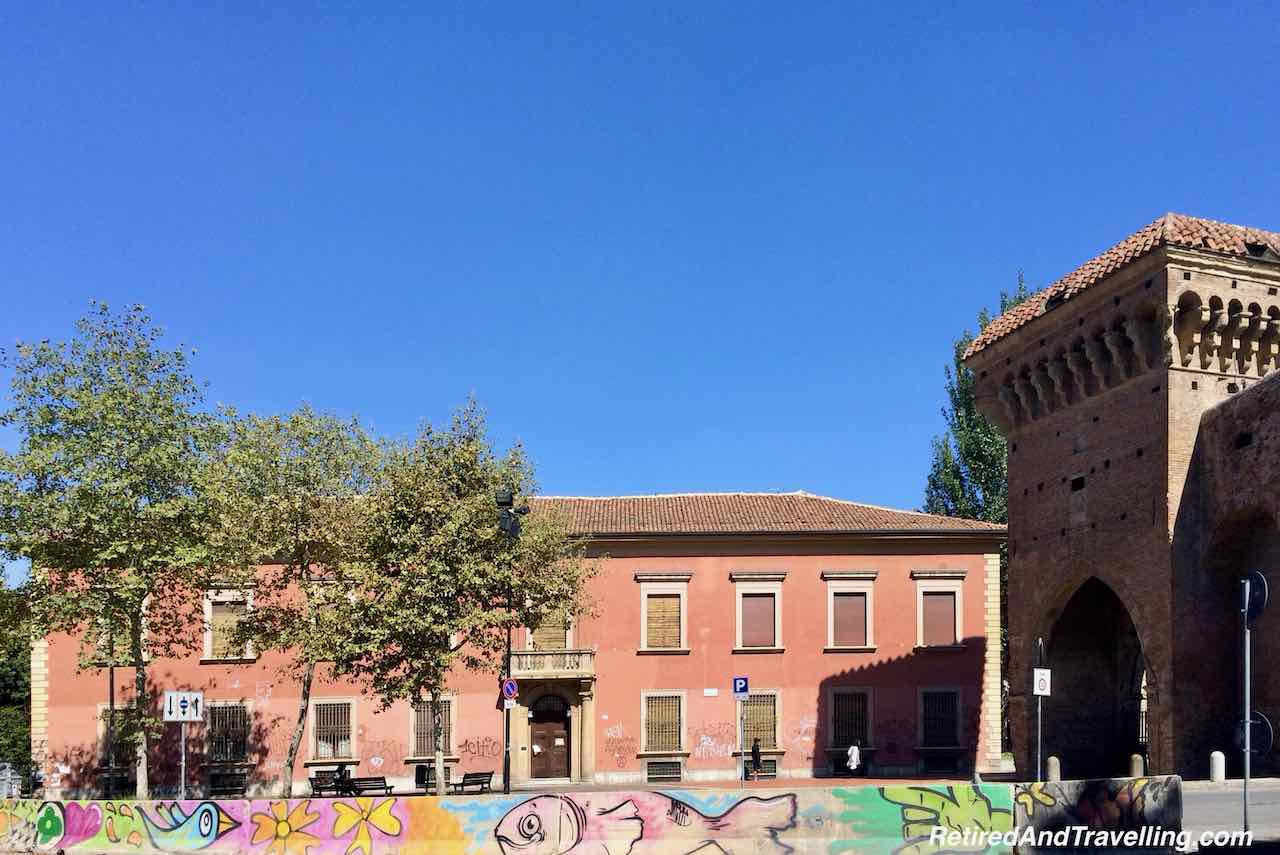 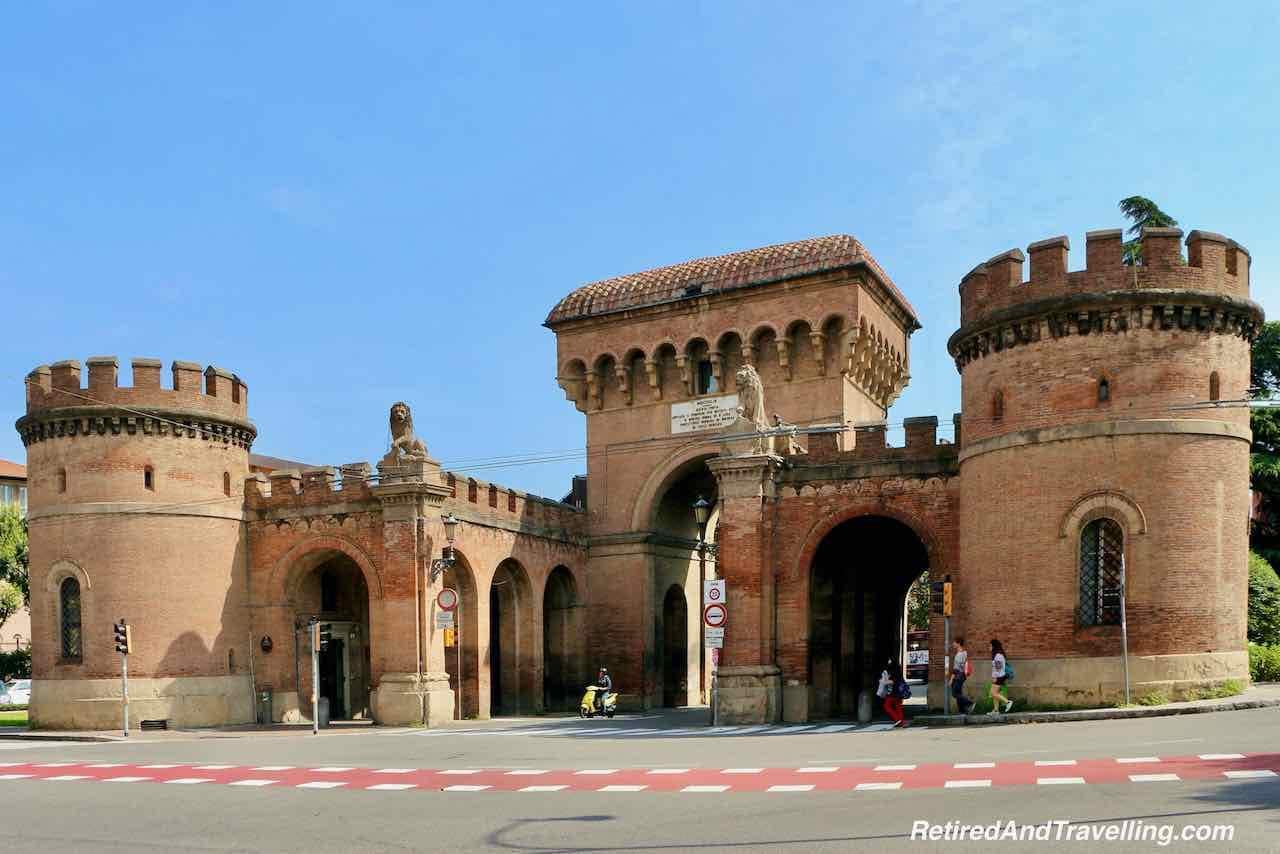 Miles and Miles of Covered Porticos in Bologna Old Town

I was fascinated by the miles and miles of porticos.  These arched walkways provided cover from the sun.  Even if in many places they were a bit darker after dark than we would have liked. Some porticos were more utilitarian.  But many were highly decorative and often caused me to walk with my eyes upwards. 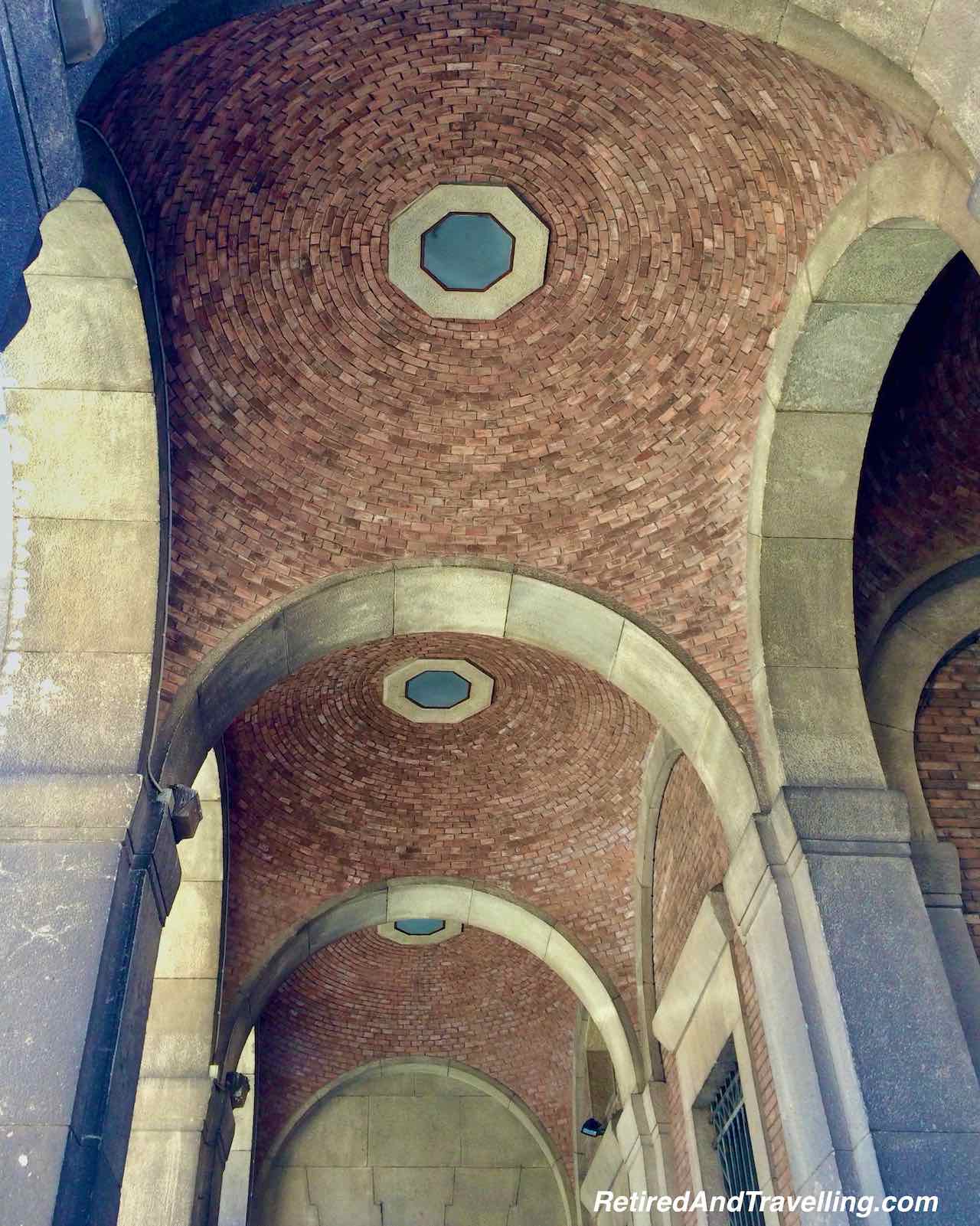 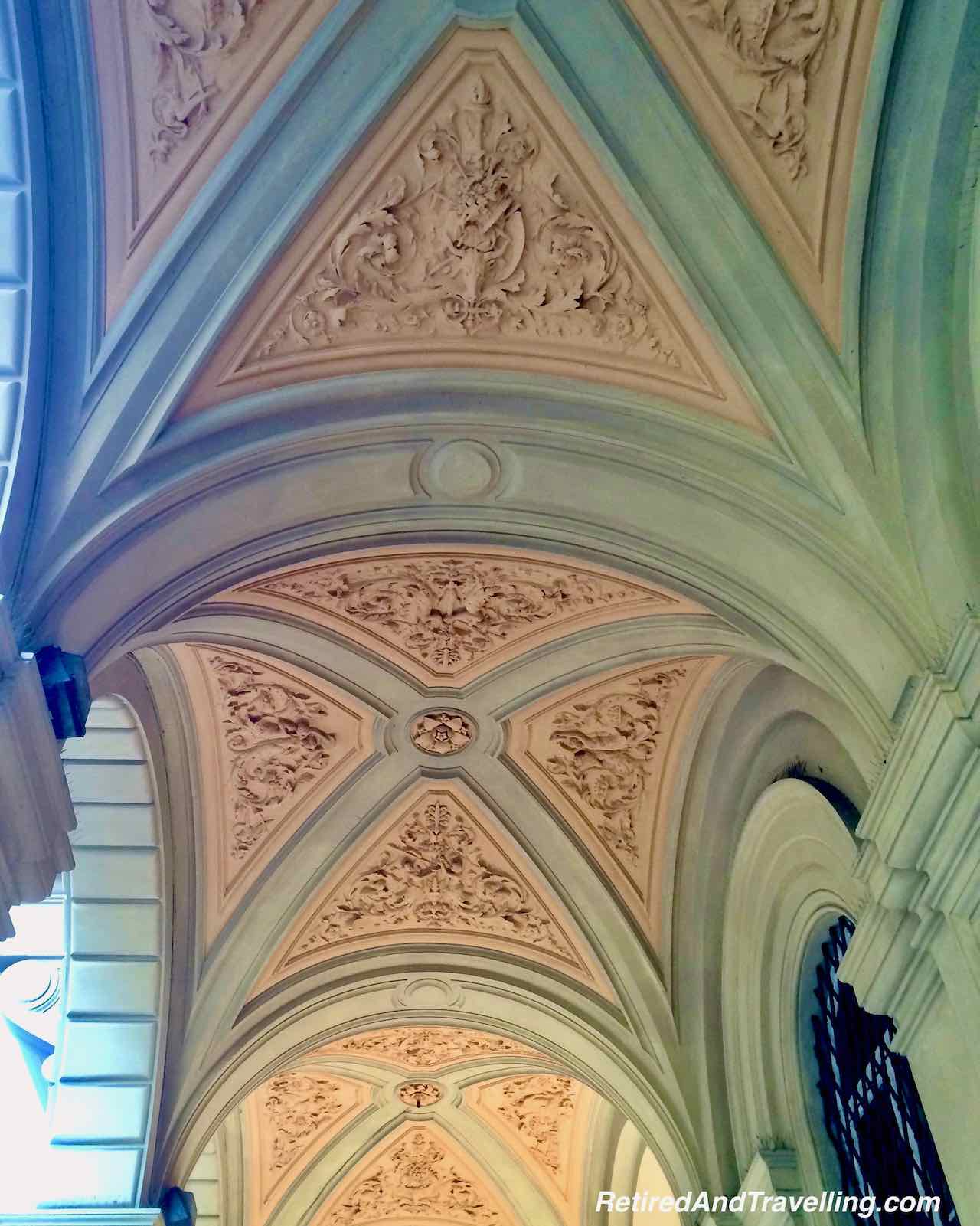 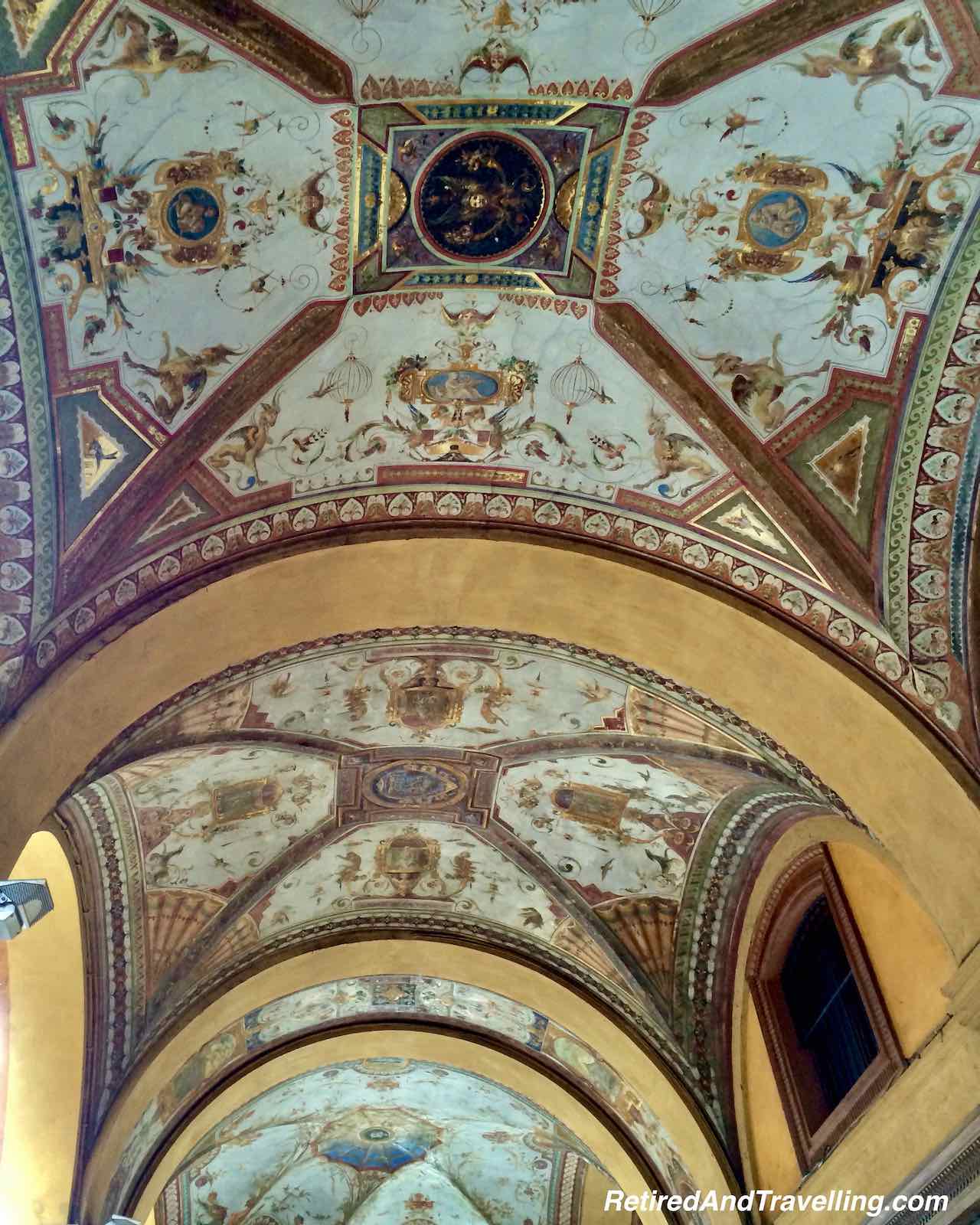 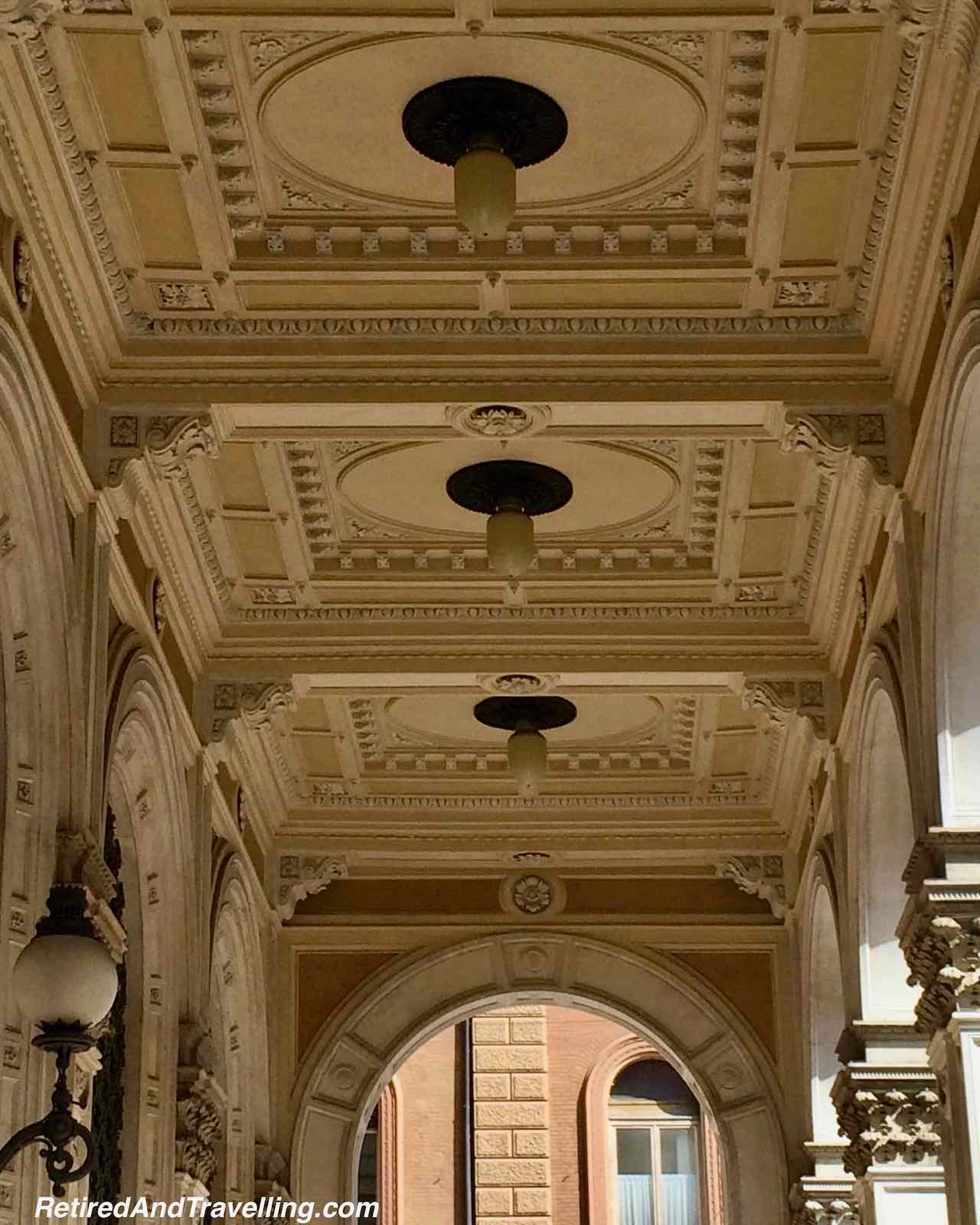 A visit up to San Luca was a highly recommended trip to see the mother of all porticos!  The church and the view from the top of the 666 portico route made the visit worthwhile. But I was only going if I could ride up and walk down!  One day we wandered to find Piazza Malpighi (the transportation hub) and the pickup spot for the San Luca Express (a little tourist train).  With schedule in hand we tackled the mother of all porticos later in the week. 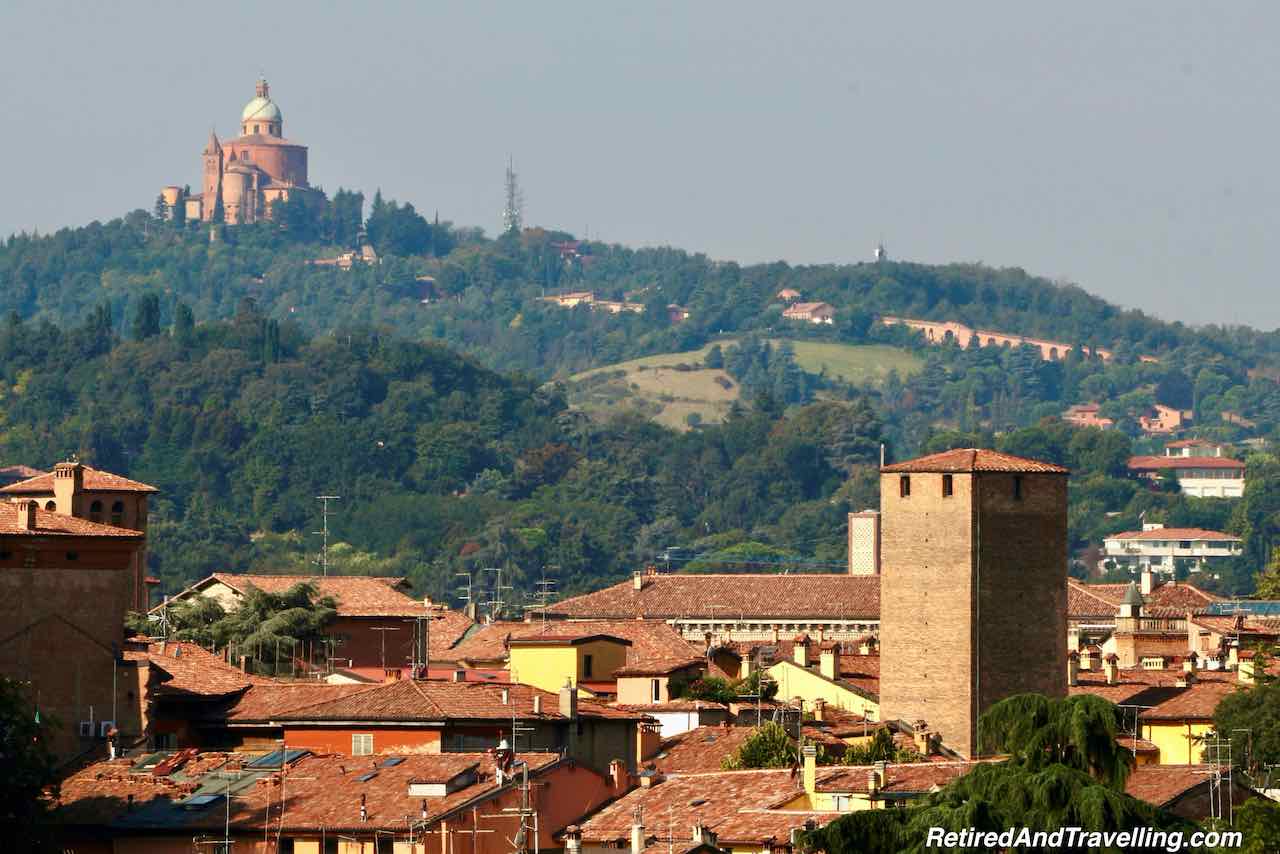 Like most of Italy, almost every turn also produced yet one more church. Some were under renovation and many were closed. Knowing we would be seeing many many churches in our trip to Italy, we admired the churches and bell towers from afar in this town. 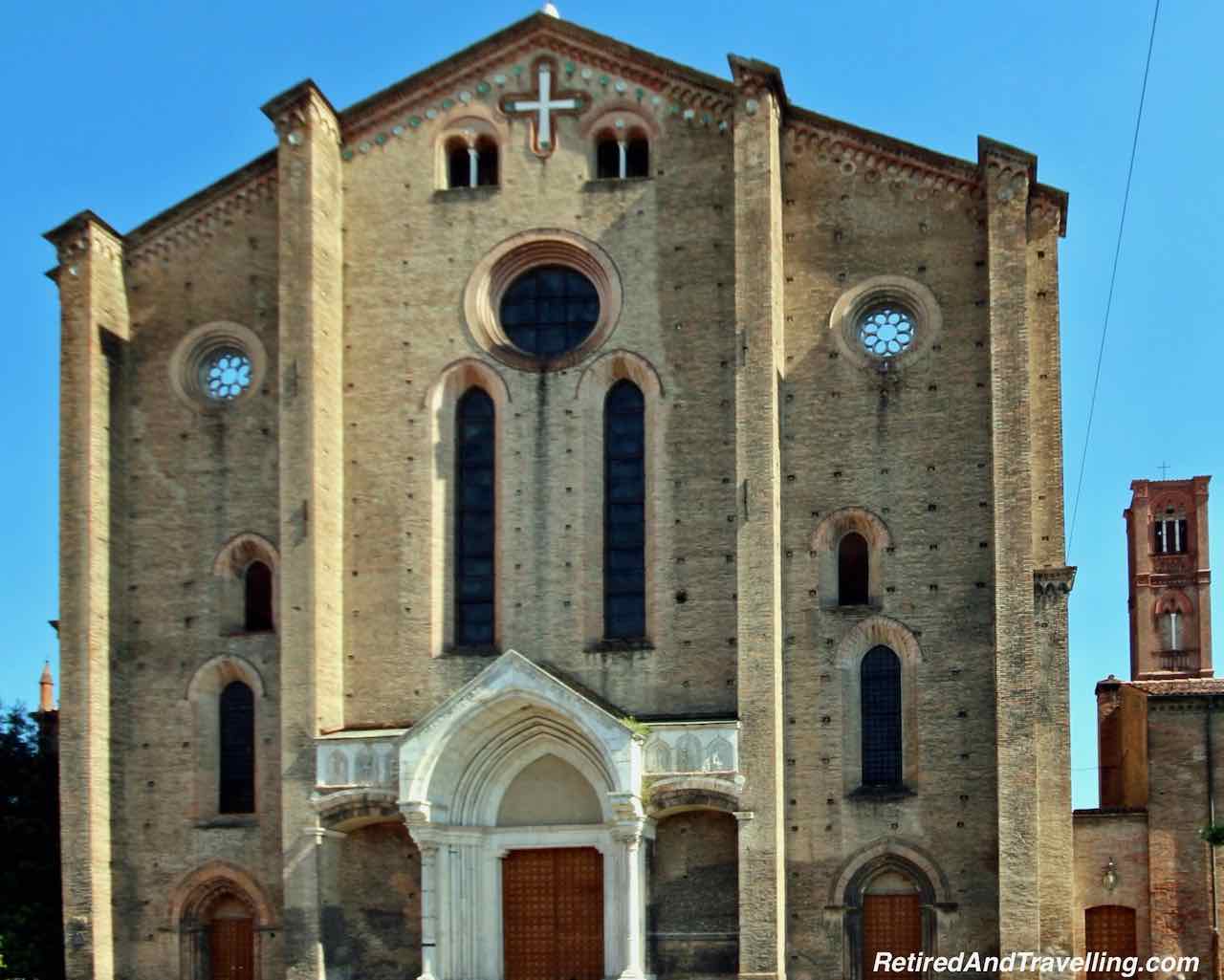 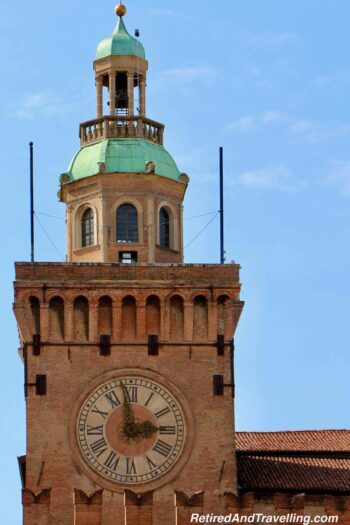 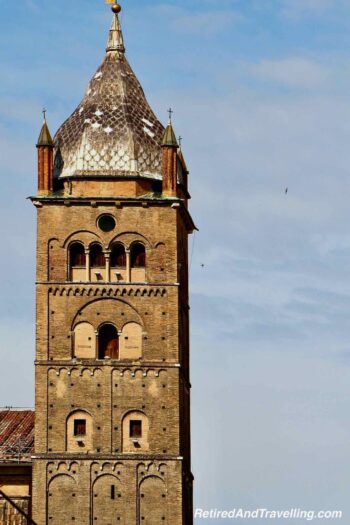 We found the twin towers in the heart of the old town and were certain that one or both of them were tilting badly. There were steps in the taller one that allowed you to climb to the top to see Bologna spread out in front of you (even though the bottom had scaffolding all around it, the stairs were still open).

Climbing the tower stayed on our list until the last day.  But after we had gone to the top of the hill of San Luca, we figured we had got the best panoramic view (if not a more close up look at the old town). 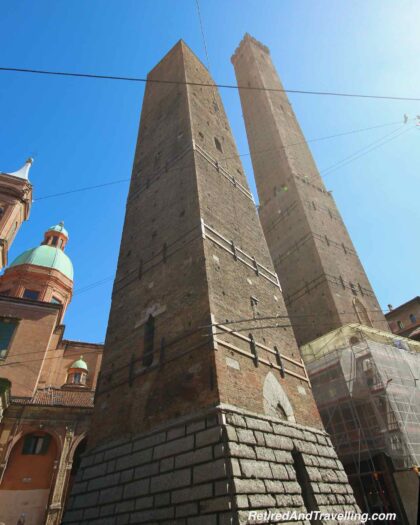 Piazza Maggiore at the centre also boasted the statue of Neptune,.  I was sure that this hedonistic display offended some travellers for its explicit sexual poses. 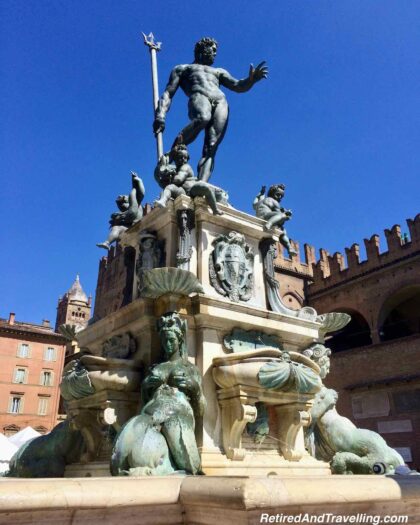 A Food Tour In The Emilia Romagna Region

No trip to the Emilia Romagna region was complete without at least one food tour. While our hotel recommended one of the better known ones, a little research uncovered another highly recommended option with Italian Days Food Tour.

At almost 150€ per person it was expensive. But we got 3 factory tours (Parmesan, Proscutto and Acetico Balsamica) and an awesome lunch.  Contacting the website, we got an email confirmation with complete instructions for our day. We originally planned to do day trips to Parma and Modena.  But after our food tour, we decided to pass on that for this trip. 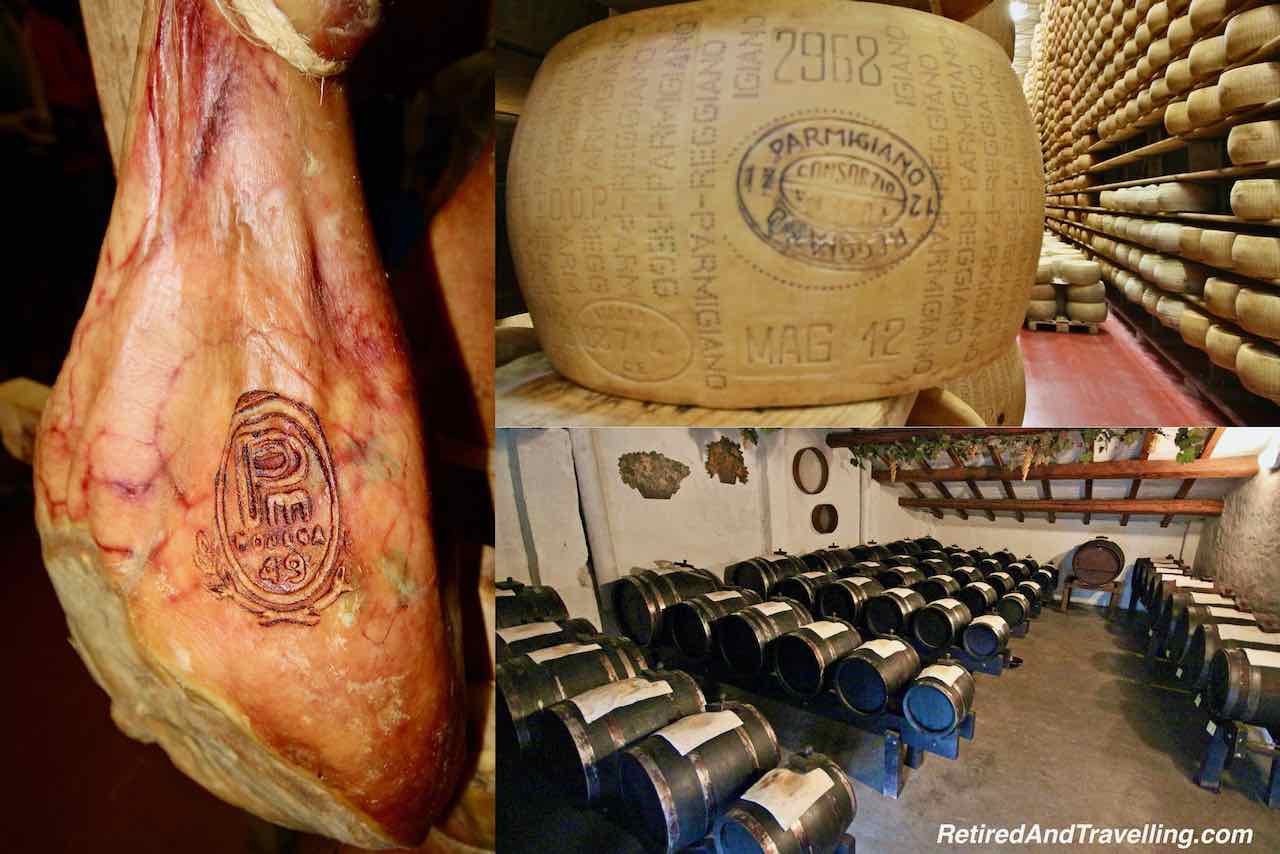 The Awesome Food of Bologna

Known as the “Fat City”, Bologna lived up to this name during our trip. Our hotel had a great selection for breakfast and we got a strong protein boost for the day.  We continued to picnic after visits to the market or the local food store.  But we tried to eat one good meal out each day. There was a local restaurant (Ristorante Cesoia) that gave us our first introduction to tagliatelle au ragu and a pleasant surprise with fresh fish.

We ate like kings on our food tour day with samples of a broad selection of typical Bolognese dishes. The learning from that tour helped us order at a restaurant down a small alley that was recommended to us (Osteria Al 15).  The proprietor took special care to oversee (and correct) our menu choices.  He ensured we got the most delicious taste experience.

Probably the most unusual spot we ate was Toffee Art Cafe close to our hotel.  It was a converted red shipping container on the street. The food was good but the large selection of chocolate desserts sealed the deal. 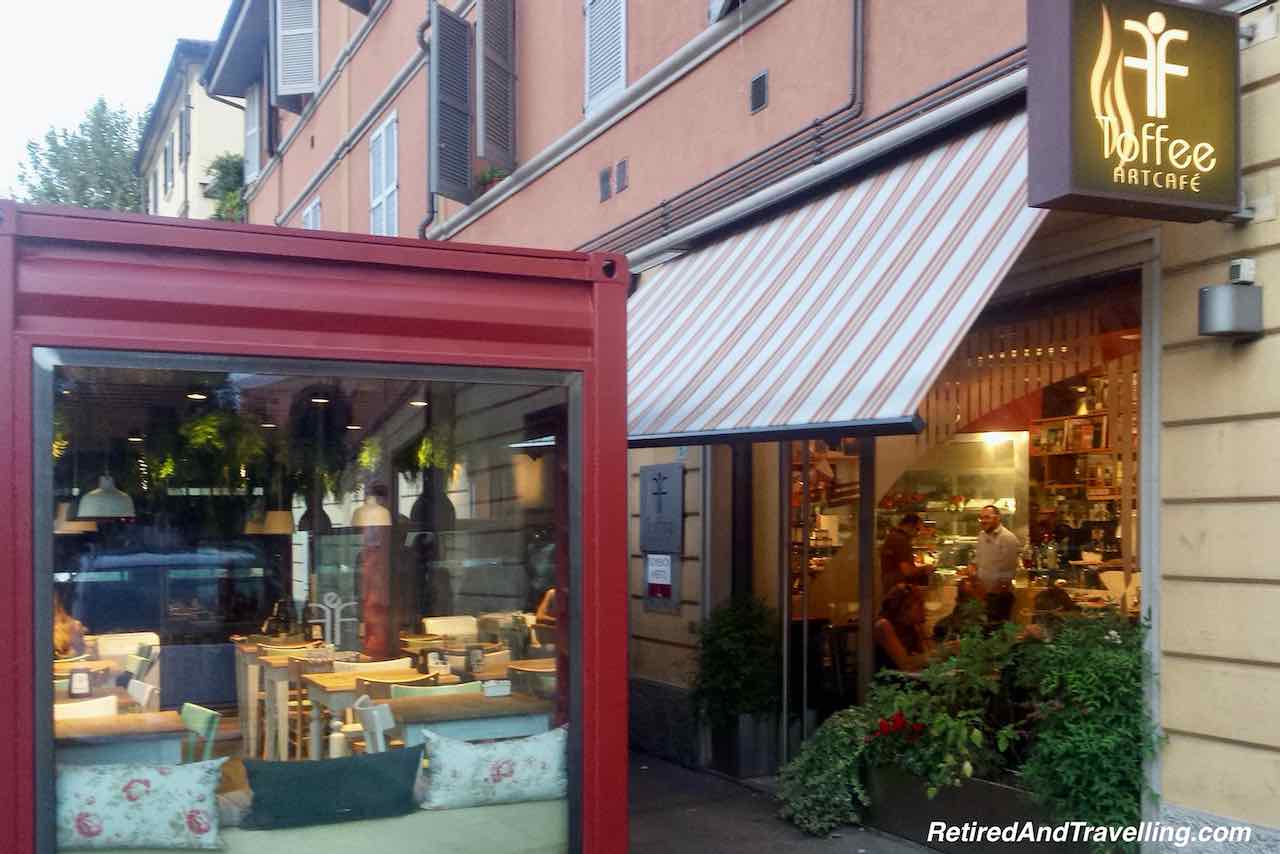 When we had walked our feet off, the default was pizza. And when we followed the recommendations of our hotel and tried Pizzeria Spacca Napoli, we found both the seafood and proscuitto pizzas to be a gourmet delight.

The 7 days in Bologna flew by. We never took the train into Florence, even though it was only a 45 minute train trip. On a previous cruise we did a day tour of Florence.  And we were not sure we really wanted another quick whirlwind tour. We would leave Florence for another trip (when we would also re-visit Siena).

Having learned our lesson about regional train travel, we picked our train for Igea Marina with care.  If you book a first class ticket and don’t get an assigned seat, it is not really first class.  So don’t expect anything more!  This is the likely situation when booking regional trains – so consider the high speed trains if you want real first class!

What was your favourite part of Bologna Old Town – the Fat City, the Educated City or the Red City? 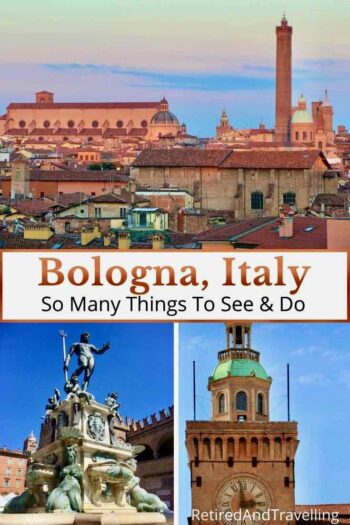 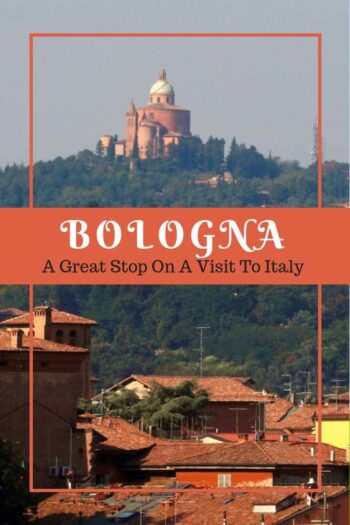