A Guided Tour Offering New Orleans History Through the Dead

While we were in New Orleans for Mardi Gras, we planned 8 days in New Orleans to give us some time to see a bit more of the town as well. We had been in New Orleans several times before, but neither of us had done a cemetery tour. We wanted to learn a bit of New Orleans history through the dead.

A new policy has been implemented to protect the historic St. Louis Cemetery No. 1 from desecration by limiting entrance to family members of the interred and registered tour groups. This means you can only visit if you are with a tour guide and they are strict on making sure you display your tour tag and leave when the tour guide leaves.

It was recommended to us that we use Save Our Cemeteries as our tour company for a more authentic experience. We booked our tour over the internet and met on the day of the tour to learn New Orleans history through the dead in front of the Our Lady of Guadalupe Church. This church had originally been built as a Mortuary Chapel in 1826 and is the oldest surviving church in New Orleans. We wandered around the church while we waited for our tour group to all assemble. It was clear that this was a local church in daily operation, not one set aside for tourists and photos. 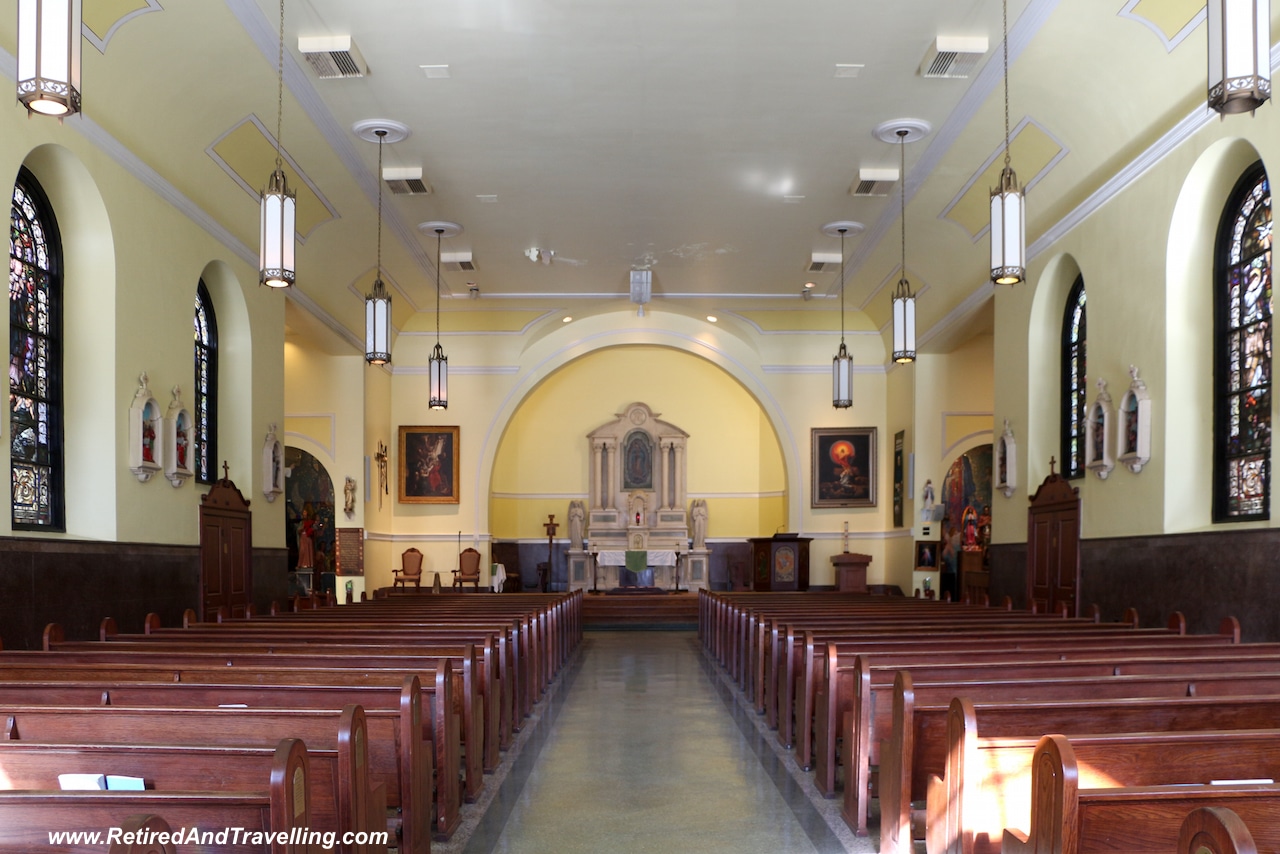 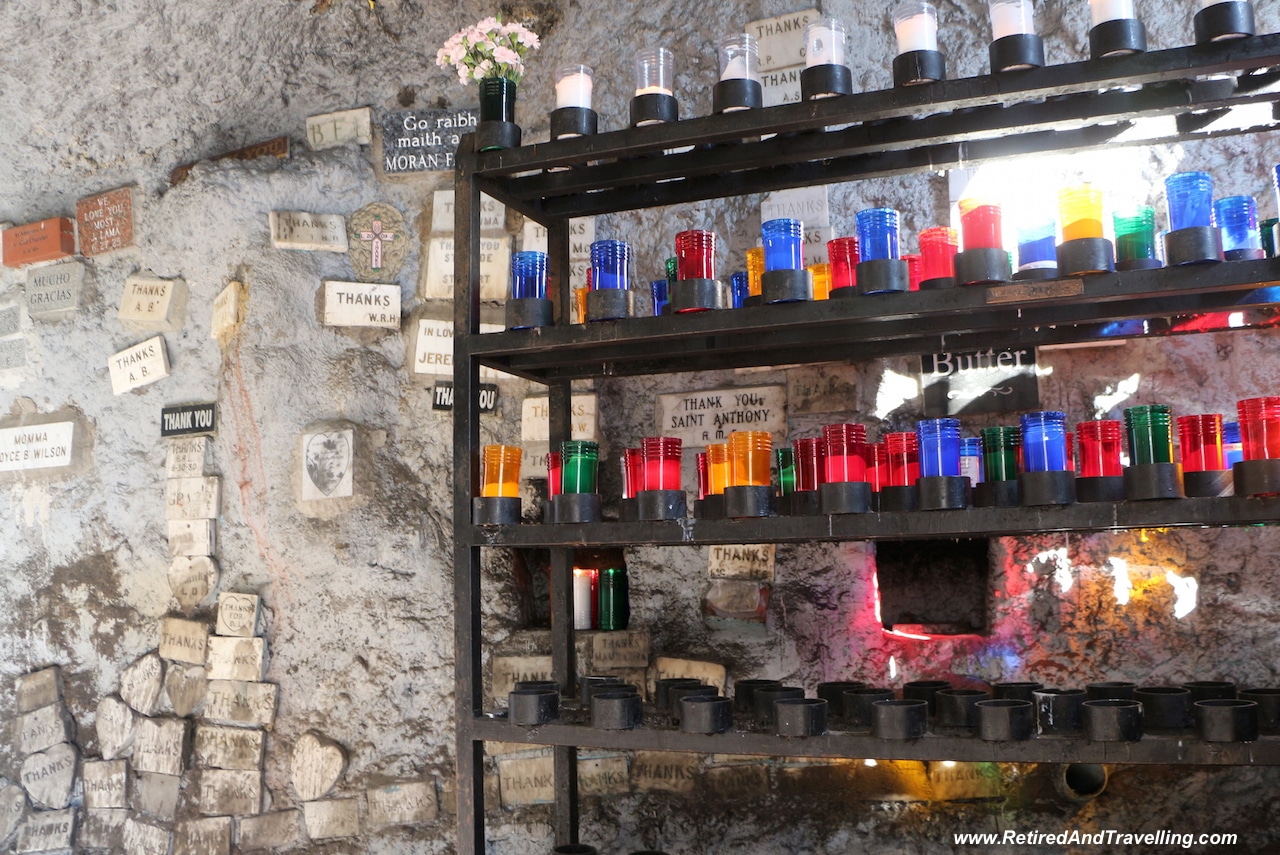 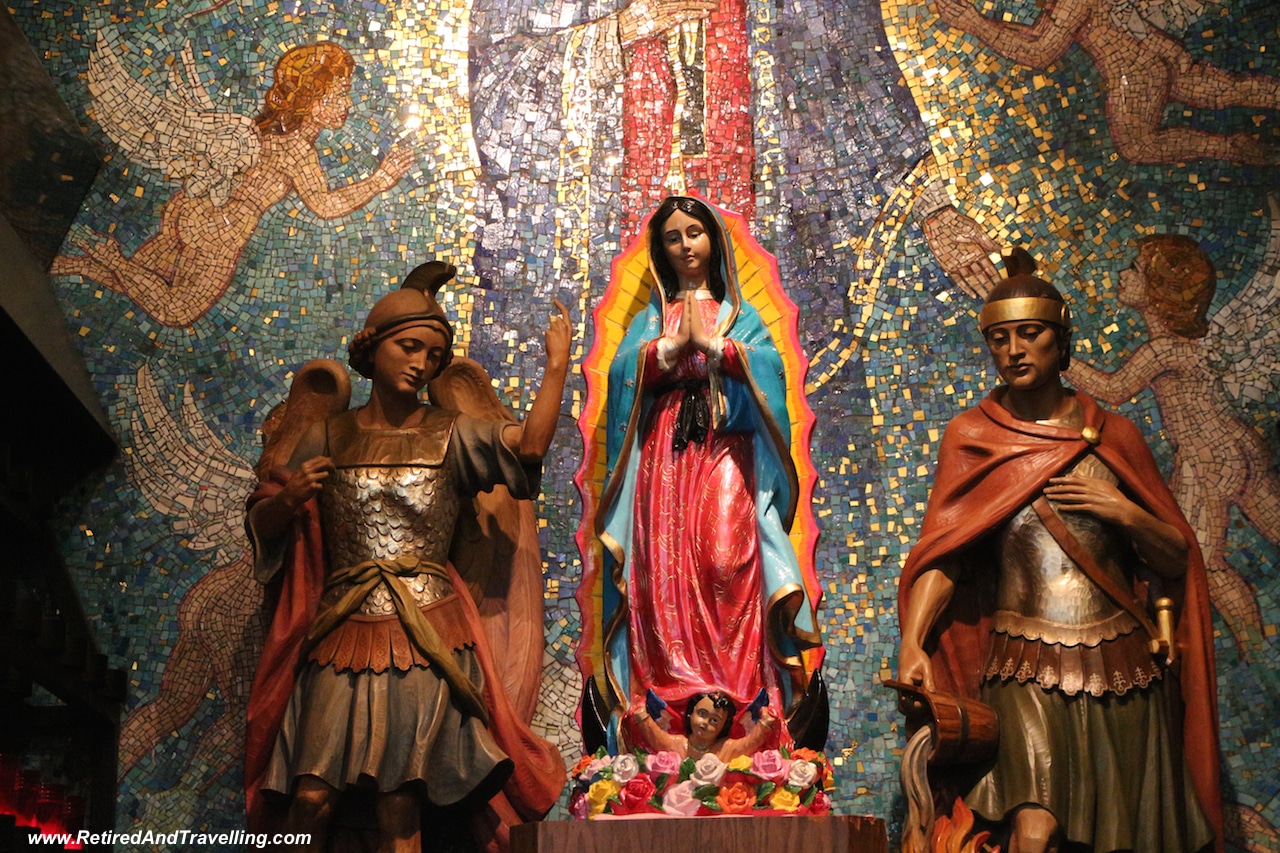 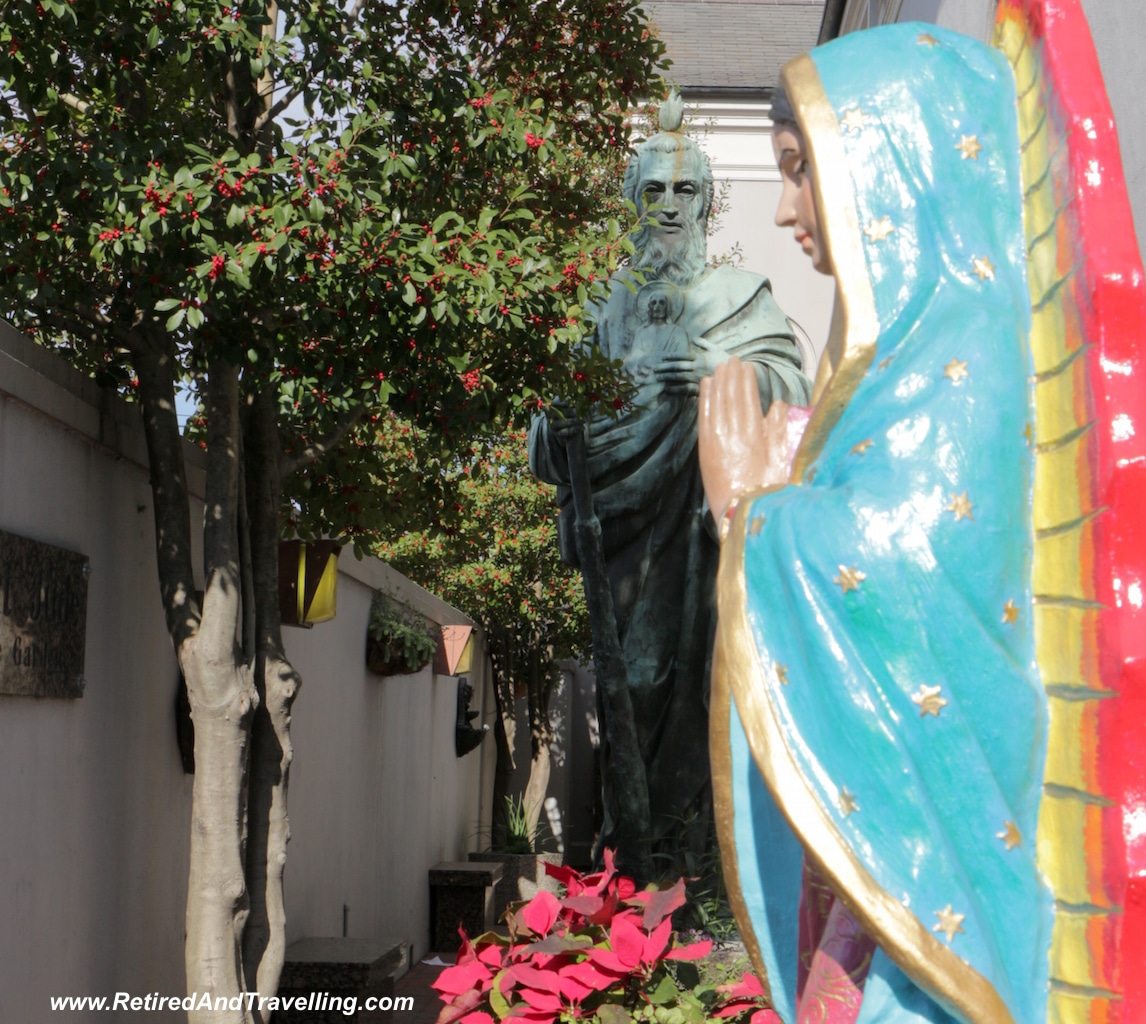 I should note that we went on a daytime tour that was focused mostly on learning some of the history of this grave site. Some of the people on our tour seemed disappointed that this was not a ghost tour!

Our tour guide to see New Orleans history through the dead was an older woman named Ginger who took us through the cemetery filling us with a broad set of facts and trivia about New Orleans, the cemetery and traditions. We could see that she had been doing this a long time and often inserted some comic relief in her commentary. 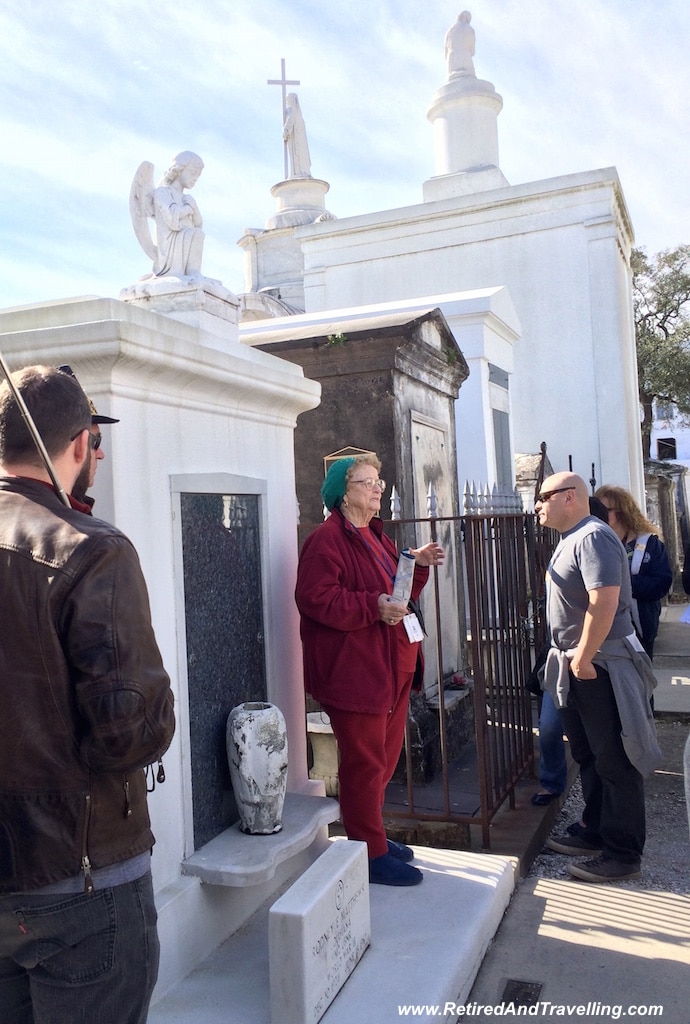 St. Louis Cemetery No. 1 is the oldest cemetery in New Orleans. It was opened in 1789, replacing the city’s older St. Peter Cemetery. The current site is smaller than originally built. When the canals were built they had to re-locate a part of the cemetery to the No. 2 site. We were not certain how many buried bodies got moved once or twice over the years! While much of the site is old and deteriorating, there are still several burials a year.

In New Orleans you will find the cemeteries largely populated with above-ground burial facilities. The biggest driver for this is the high water table in New Orleans. The city had much experience with floating coffins and multiple burials before this practice was largely adopted. A second factor appears to be that this cemetery was built when the Spanish were ruling New Orleans and the wall vault system was popular in Spain at the time.

When you first enter the cemetery you find a high vault that is a temporary burial spot (“Oven Vaults”). The rules state that a tomb can only be opened once a year. If someone died before that year was up, they would be placed in this temporary vault until the tomb could be opened again. Our tour guide laughingly referred to these as “the first apartments for rent in New Orleans”! 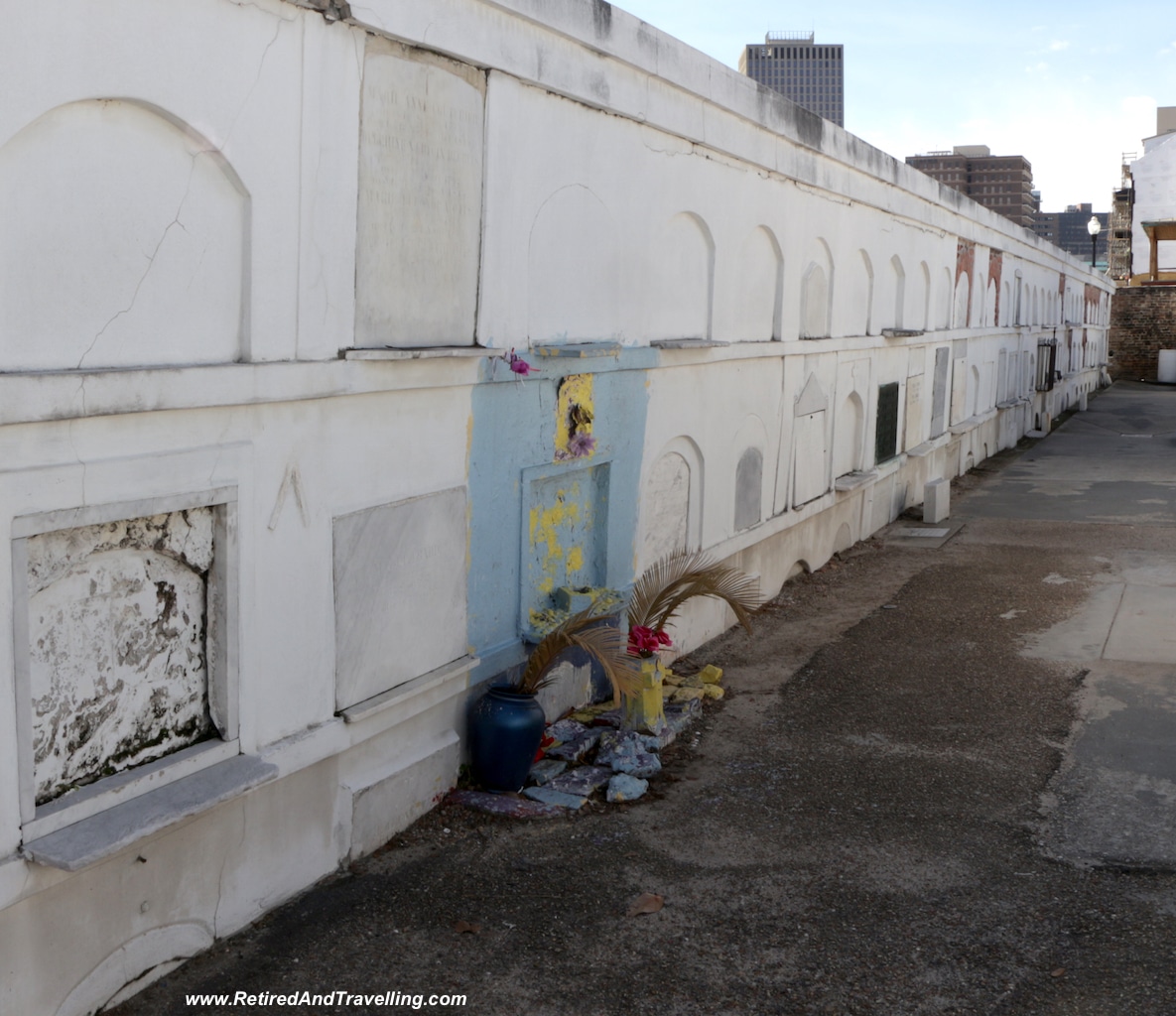 As you wander the cemetery you will find tombs of all sizes and all states of repair. Families can pay for Perpetual Care (a one time fee) which covers the cost of ground maintenance but not maintenance of the tomb itself (small plaque on the tomb). Actual tomb maintenance is the responsibility of families. Most of the oldest ones are no longer maintained because there are no family members left. The maintained tombs are typically white washed every year on Halloween as a family affair. 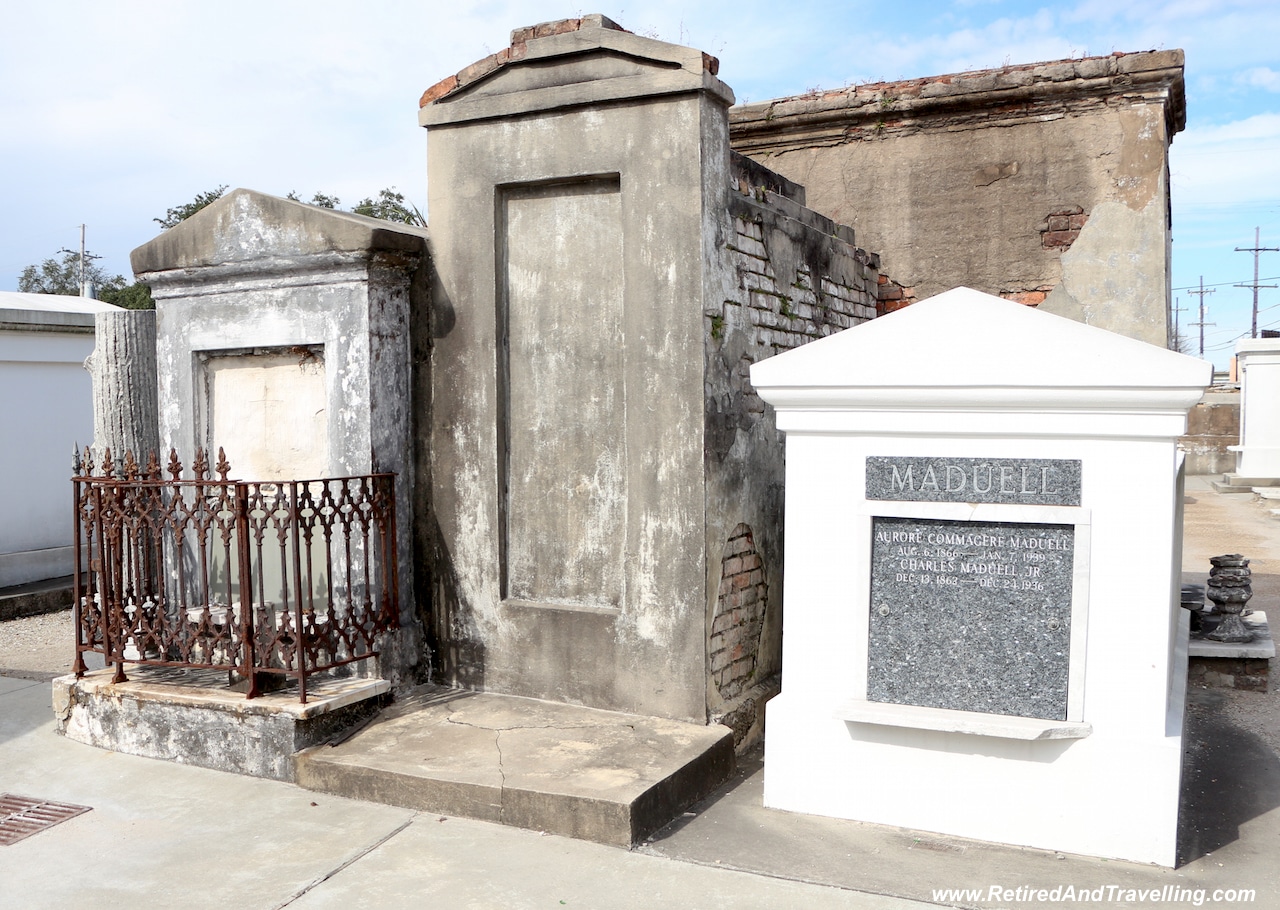 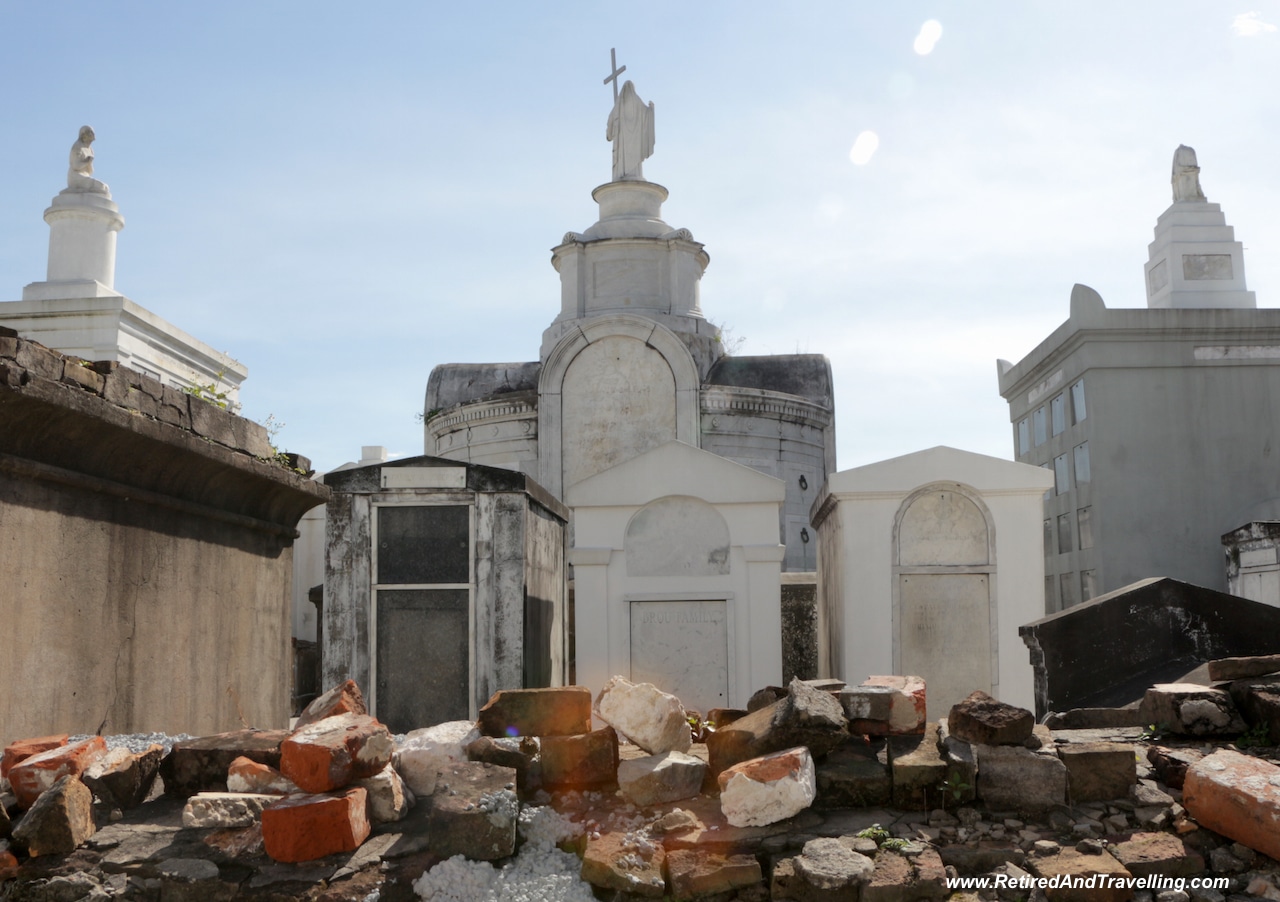 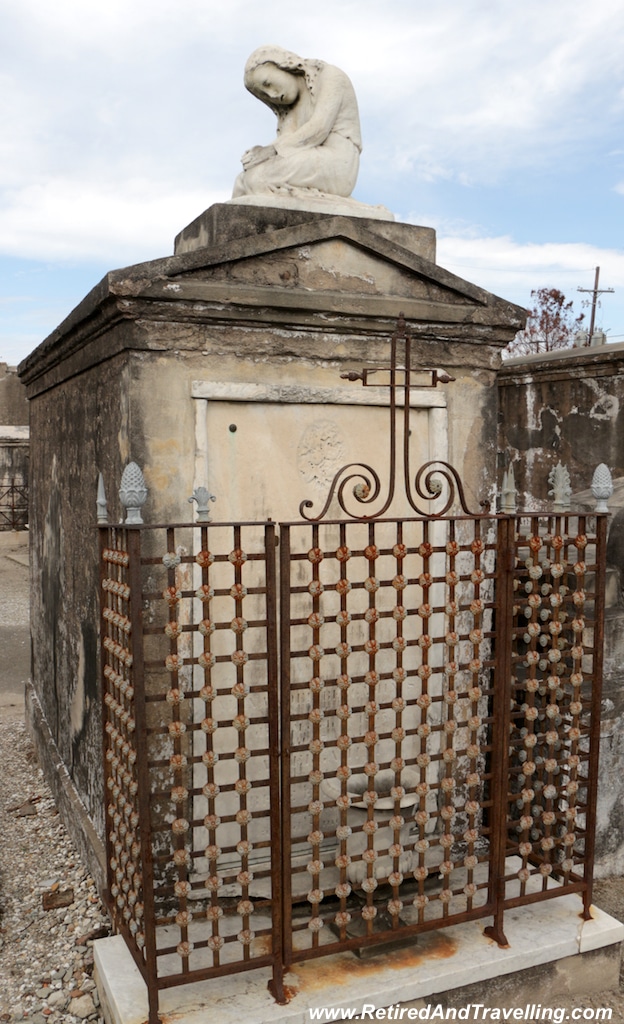 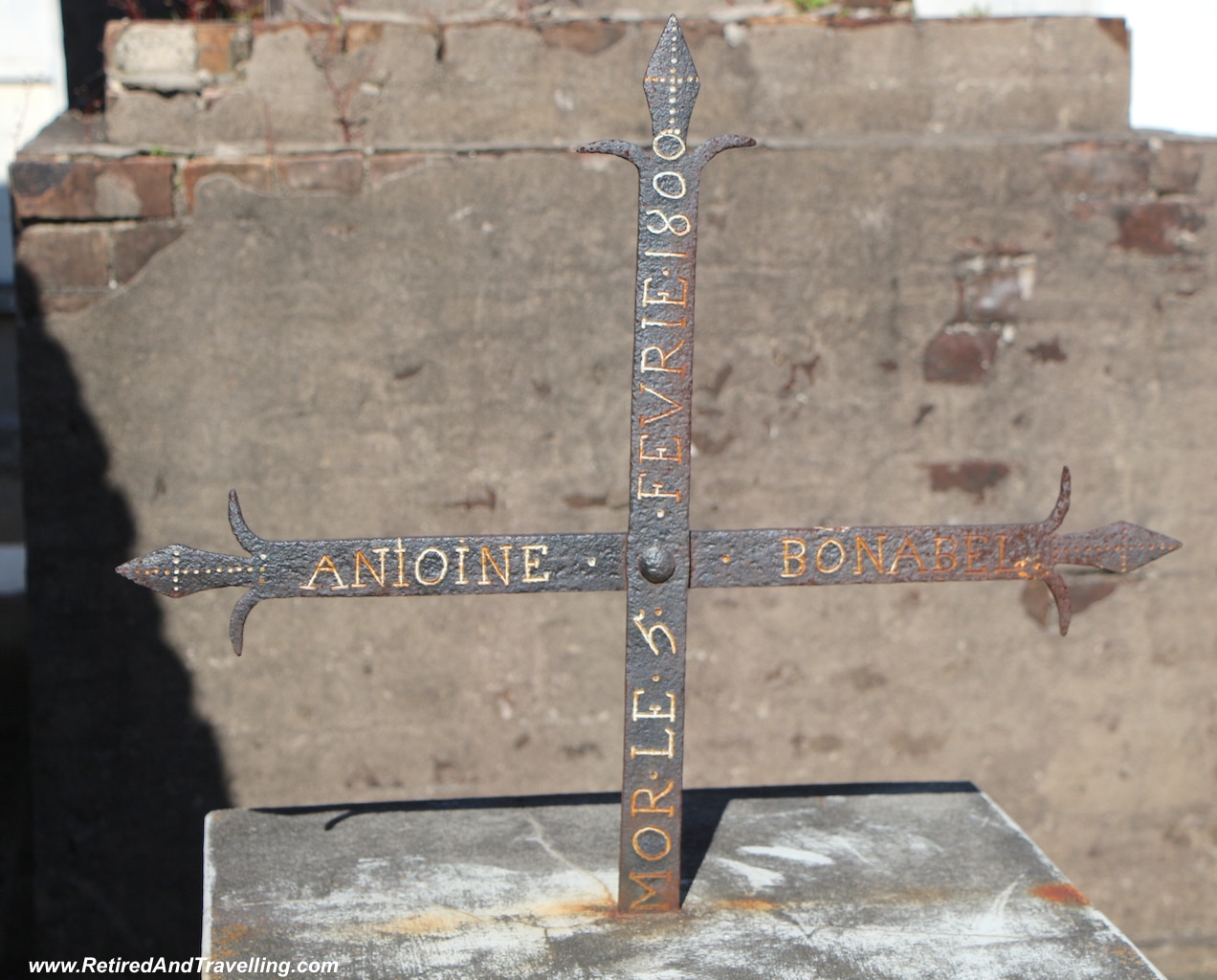 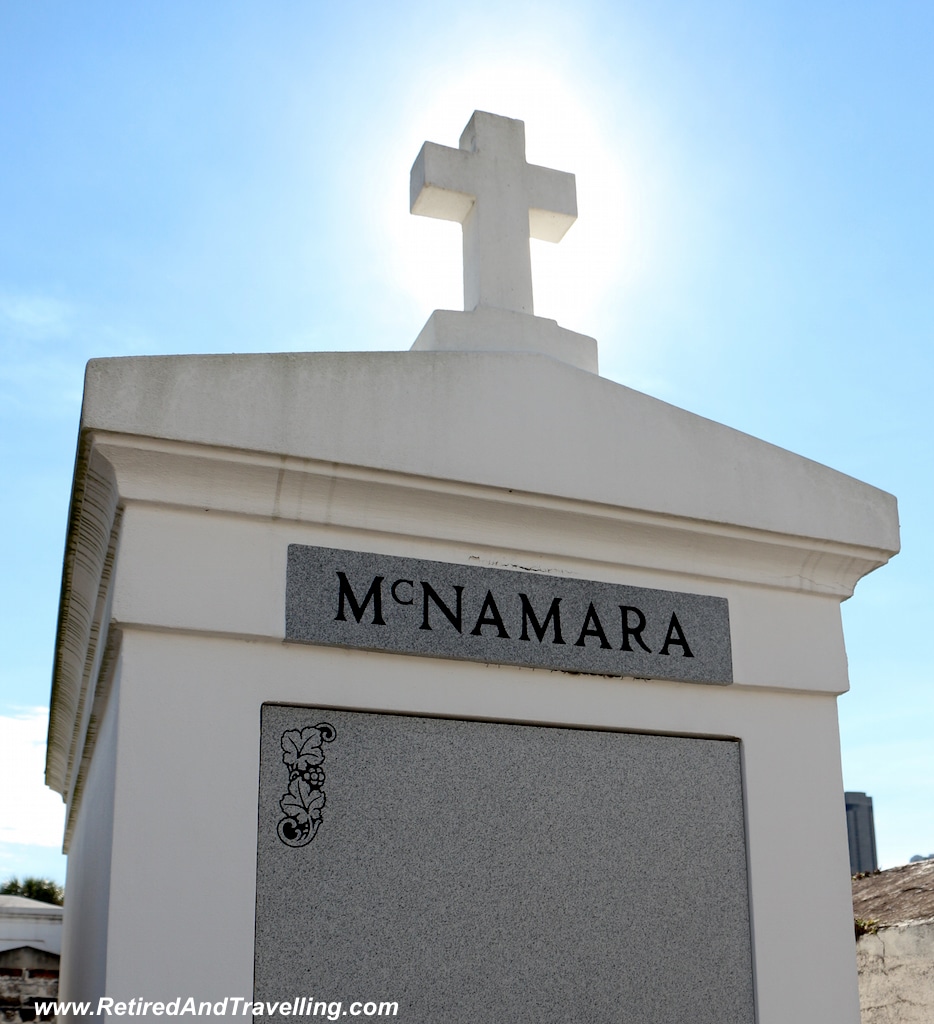 The vast majority of the tombs are whitewashed. Those left in disrepair have lost the white colouring and raw deteriorating brick is all that is left. There is one alley that includes a break from tradition with more coloured tombs. 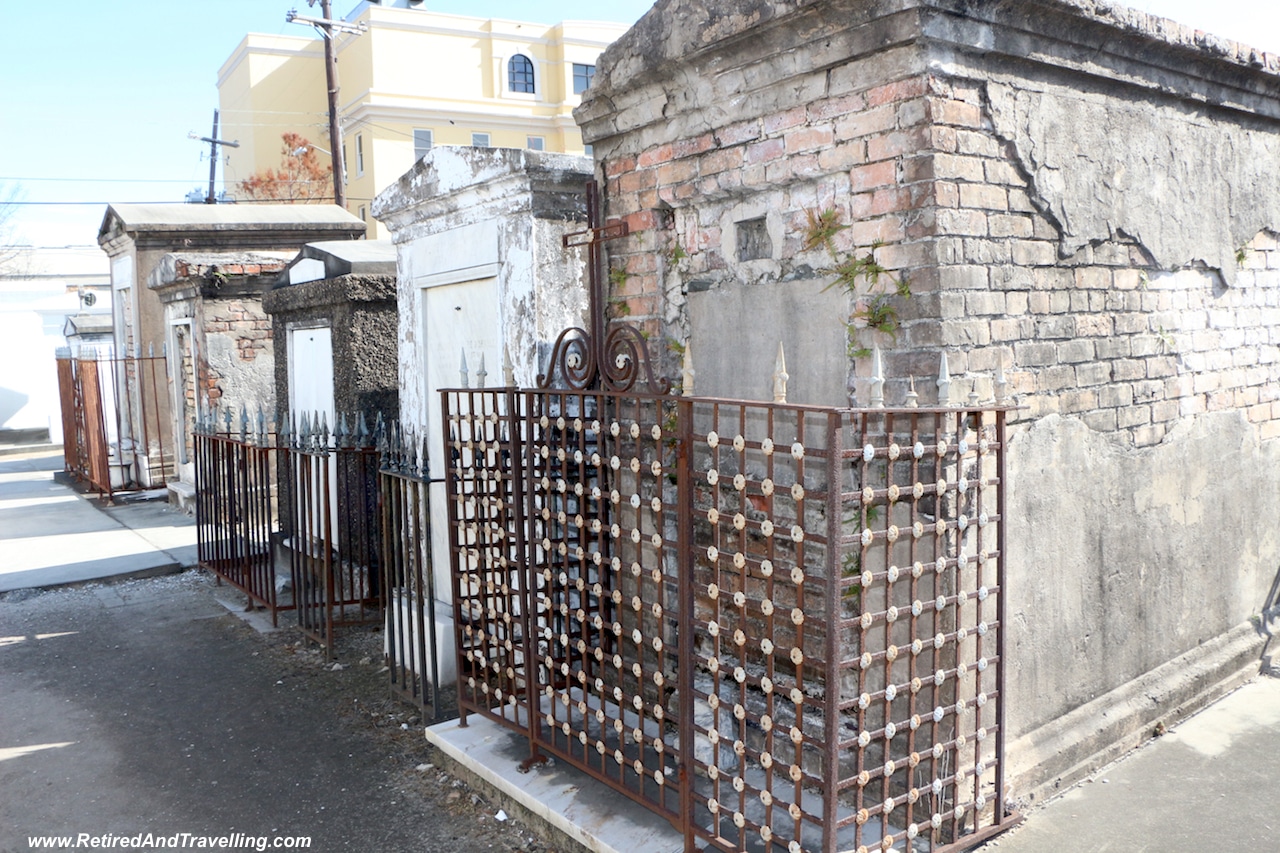 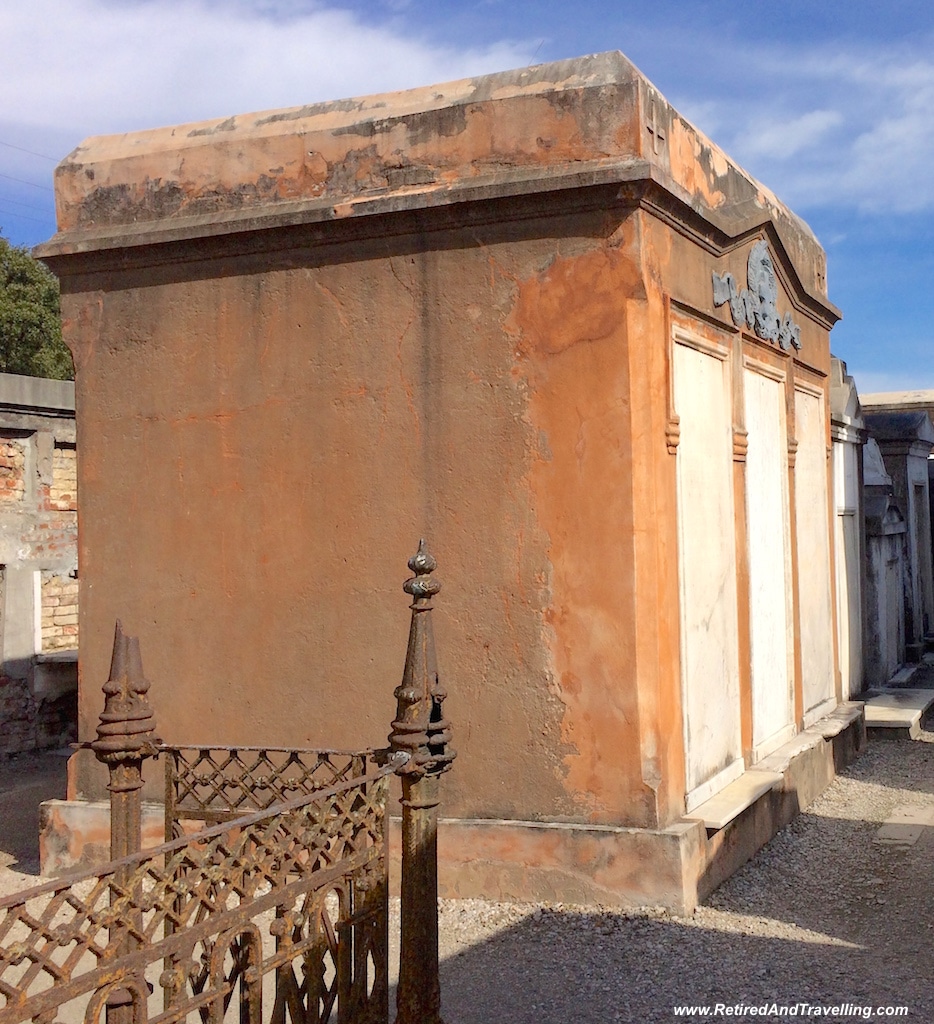 Remembering Those Buried At The New Orleans Number 1 Cemetery

It is easy to get a taste of New Orleans history through the dead. The cemetery is the final resting place of many prominent New Orleans families, particularly the Creole population. As we toured the site we got insight into some of the more “infamous” people buried here and got a sense of what New Orleans in the early 1900’s was like, especially if you were a “person of colour”. Inability to get married or to inherit kept many mixed race Creole’s out of the cemetery but there were some notable exceptions pointed out.

We learned some black history as we went along. We were told about people buried in this cemetery that included Ernest N. “Dutch” Morial the first African-American mayor of New Orleans, the person responsible for the first black newspaper and Homer Plessy, the plaintiff from the landmark 1896 Plessy v. Ferguson Supreme Court decision on civil rights (“separate but equal”).

What appeared to be the newest monument on the site was one commemorating the contribution of African Americans to the history of New Orleans. The four sides of the monument represent contributions in: music, business, religion and social. 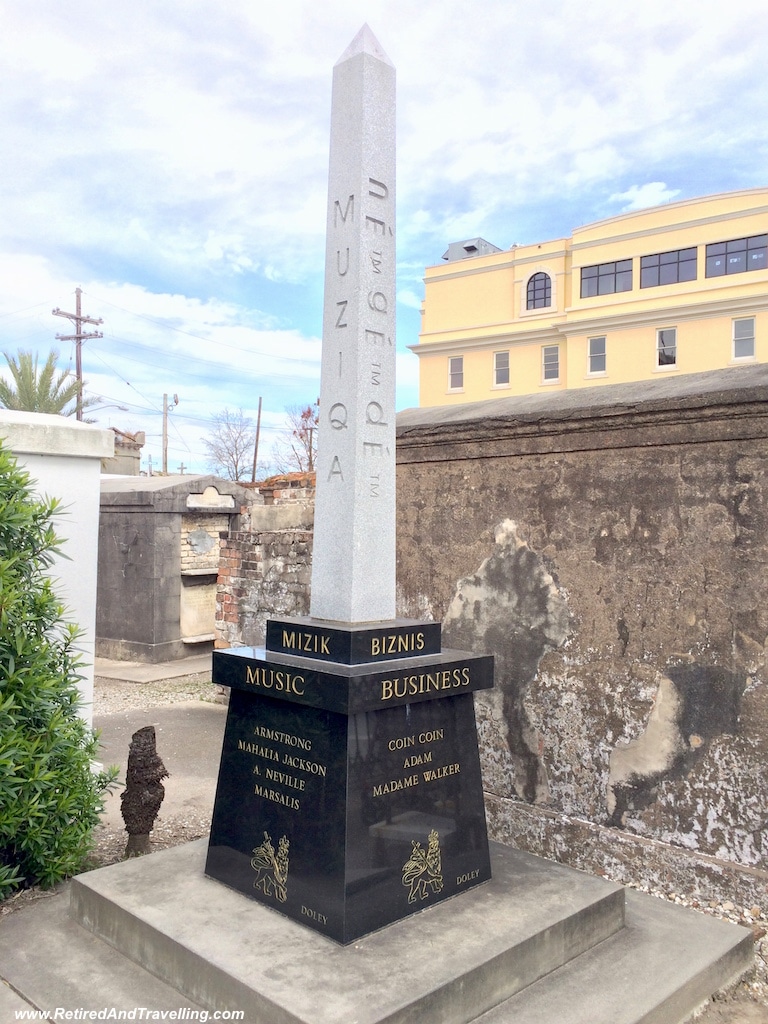 A few of the other people we heard facts and common lore about as we explored New Orleans history through the dead ….

The renowned Voodoo priestess Marie Laveau is believed to be interred in the Glapion family crypt. As a free woman of colour she could not marry but she was still buried in the family plot. It is believed that there are up to 50 people buried in her tomb, notably those that could not afford to be buried anywhere else. We heard all about Bernard de Marigny, the French-Creole aristocrat and politician who at one time owned most of the Faubourg Marigny district. He loved gambling and at the time named many streets “Craps”. Jean Étienne de Boré the first mayor of New Orleans was a planter credited with starting the first commercially viable sugar cane operation. 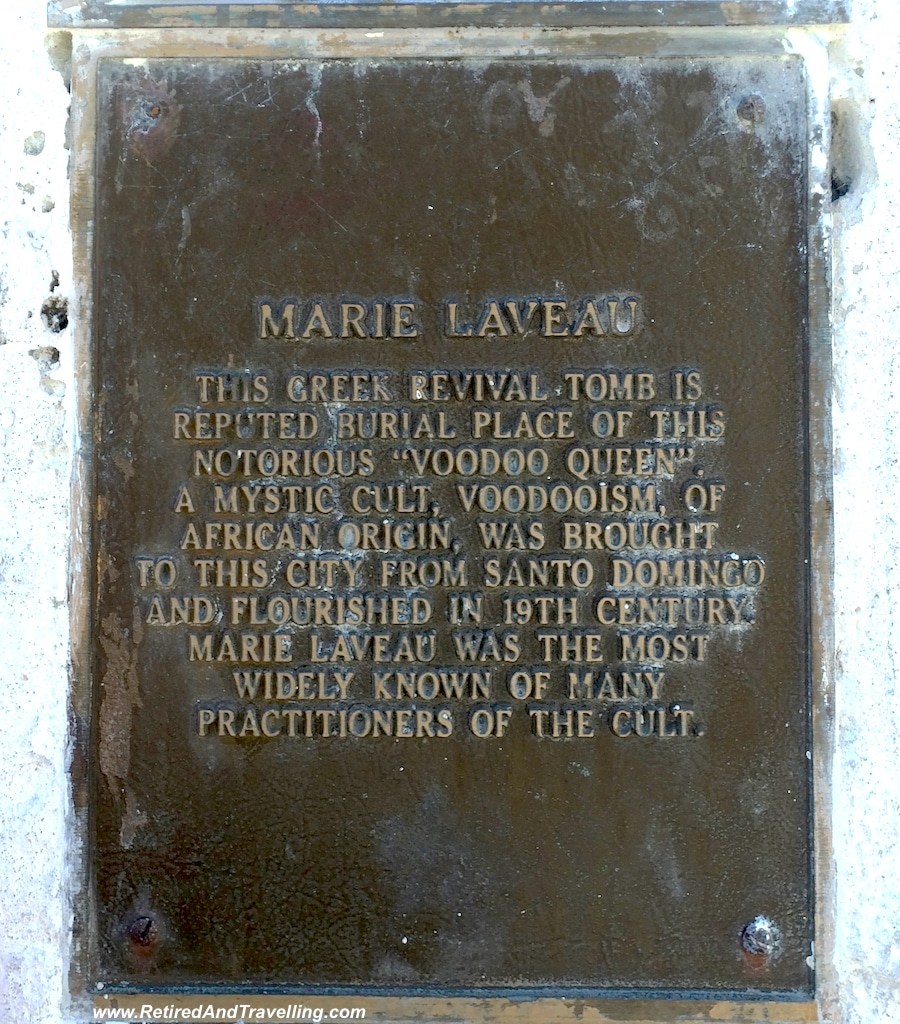 The other tomb we stopped briefly at was the family tomb of Germain Musson. Germain was the grandfather of artist Edgar Degas. It was noted that Edgar spent time in New Orleans and completed 20 paintings during his brief stay in the city. He was the only Impressionist to have lived and worked in the U.S. The Degas House, the restored Musson house on Esplanade Street, will give you a glimpse into Degas and his time in New Orleans and the art of Degas. We didn’t visit on this trip but it is something to consider for your visit

In our tour of New Orleans history through the dead we saw a mass grave for people who fought in the Battle of New Orleans. Various symbols on the front – a wreath, which represents victory, and a torch point downward as a symbol of death. The iron fence depicts ships chains, cannons and cannon balls with flames. 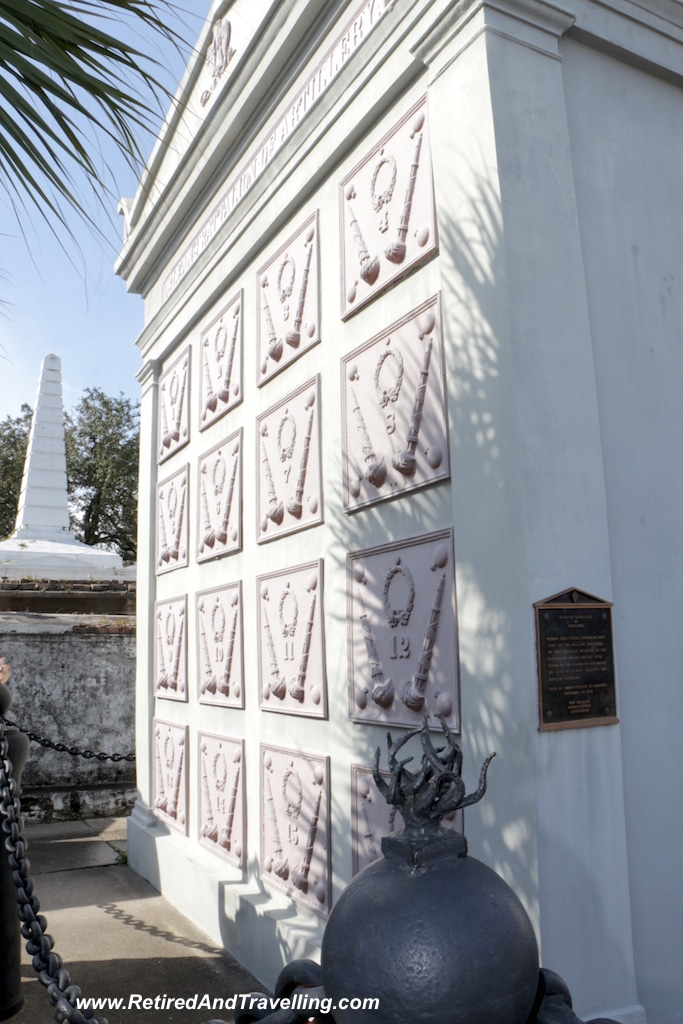 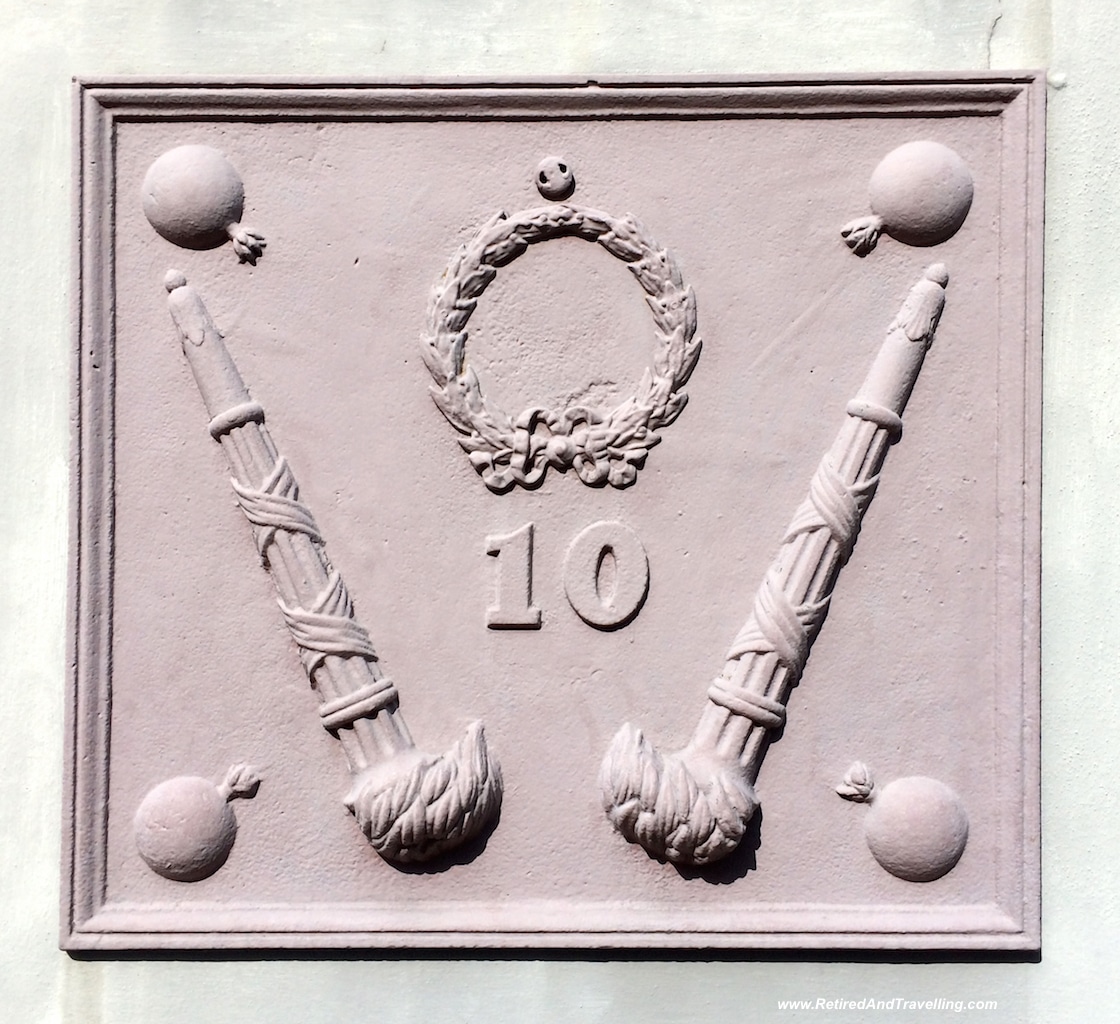 There are also mass tombs for different groups (e.g. Italians, Portuguese and of course, many for the French). 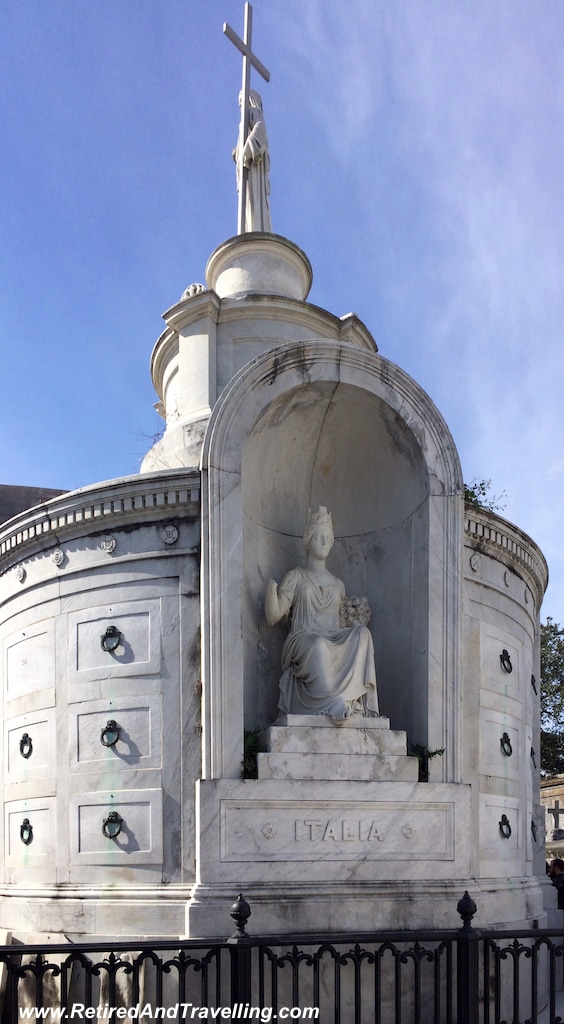 In 2010, actor Nicolas Cage purchased a pyramid-shaped tomb to be his future final resting place. The phrase on it is Latin: “Omni Ab Uno” means “Everything From One.” 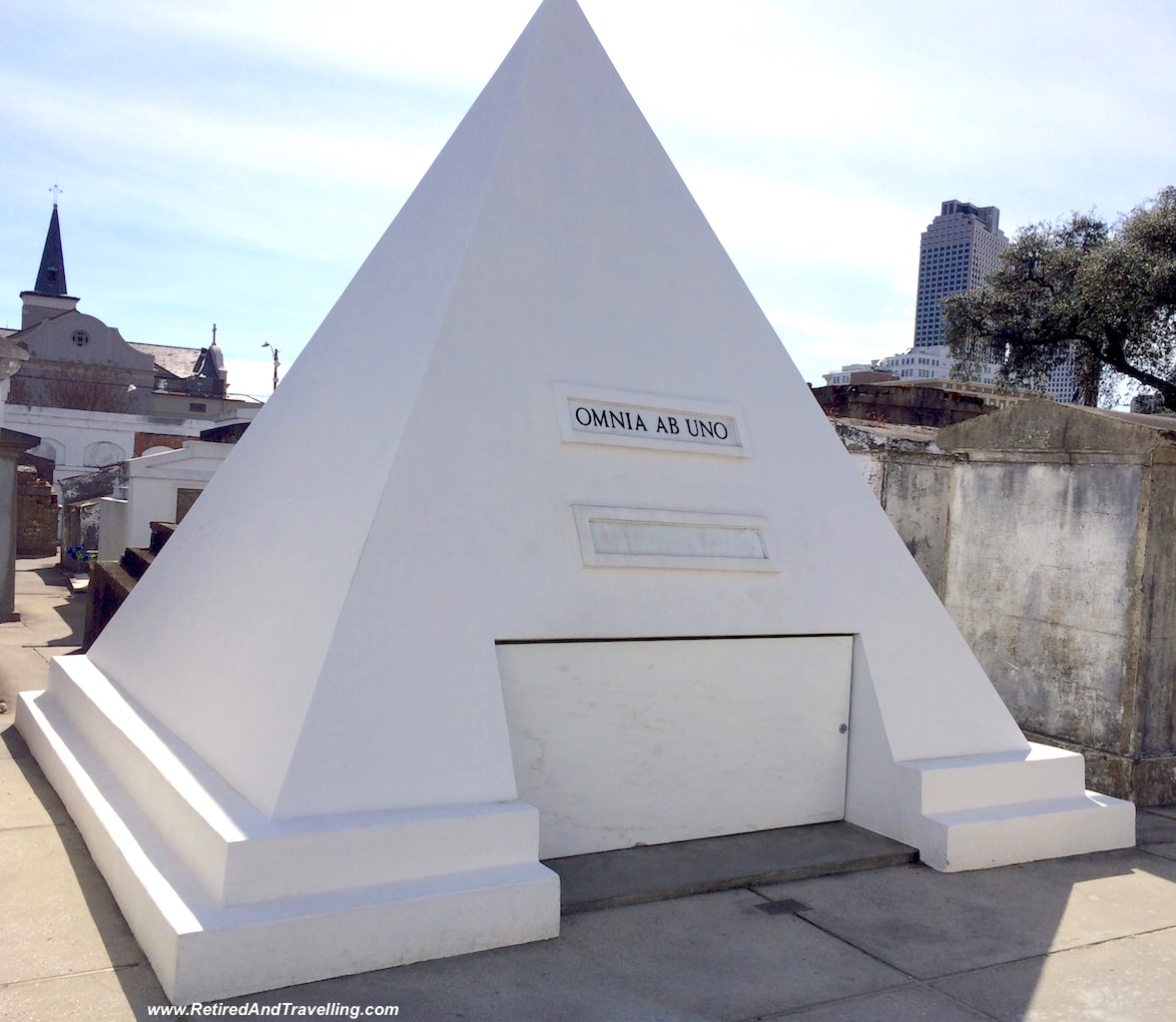 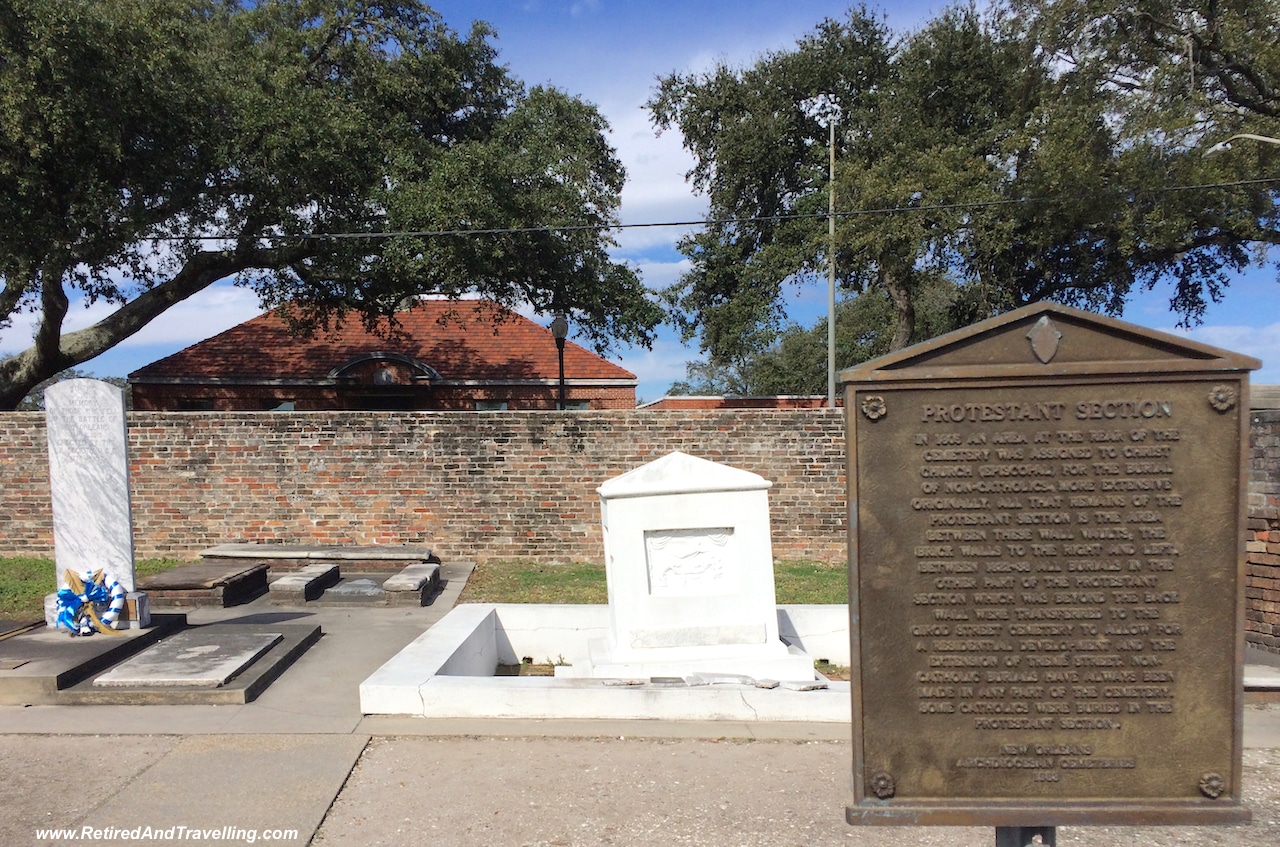 We could see flowers, votive candles and hoodoo money (coins exchanged for favours) left at many of the notable graves or by family members still caring for the graves. 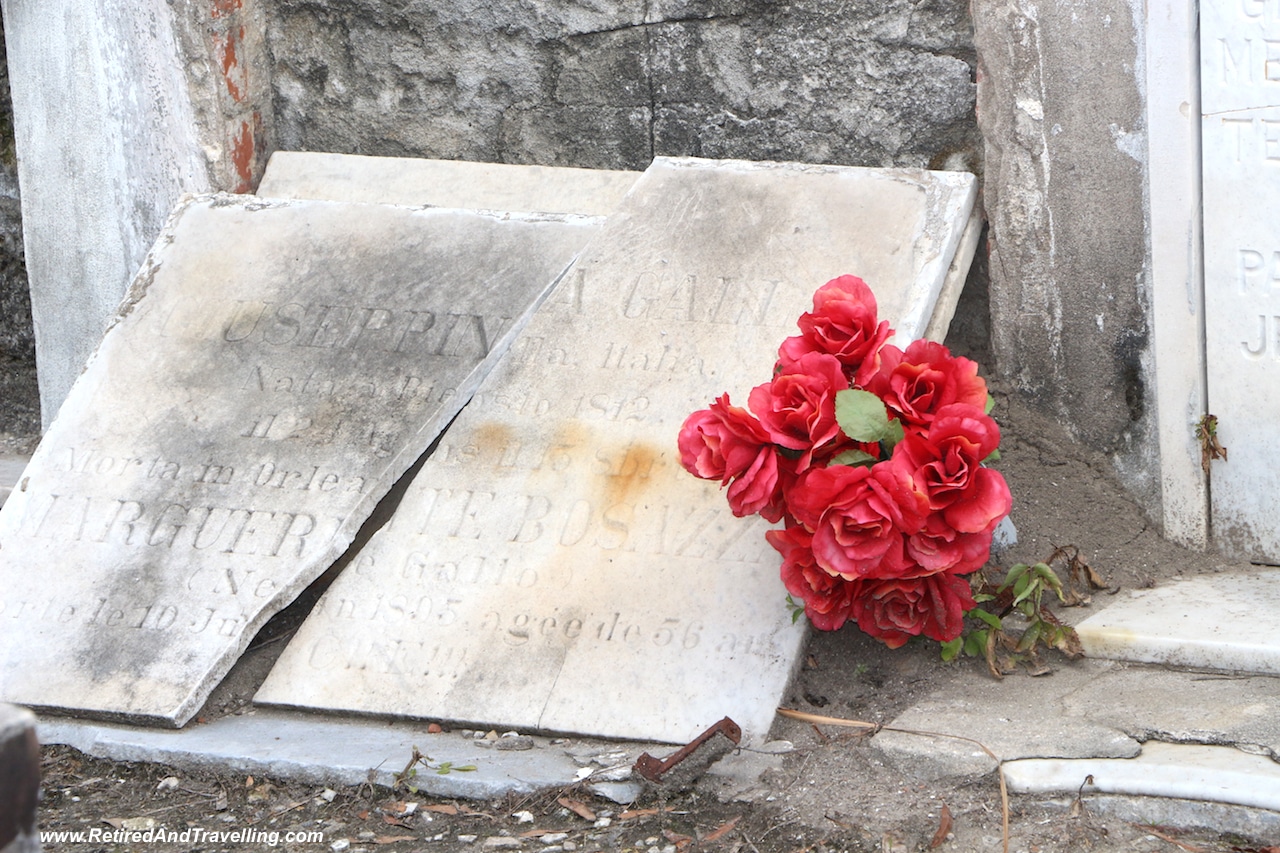 In addition to receiving much New Orleans history through the dead buried in this cemetery, we were also surprised to find that Louisiana is still following French civil law including inheritance law. If you ever consider buying property in New Orleans, make sure you investigate what this means to you. You cannot just leave your property to who you want!

When we went out to spend the morning in the New Orleans Museum of Art (NOMA) Outdoor Sculpture Garden, we passed by the St. Louis Cemetery No. 3. It is the 3rd expansion of the original No. 1 cemetery that we had visited on our tour. While a much newer cemetery, it too appeared to be largely an above ground burial site. The monuments were newer, larger and in better repair. But as we had found the Cementerio Santa Maria Magdalena del Pazzis in San Juan Puerto Rico to be an artist sculpture garden celebrating the dead, this newer cemetery offered much artistic beauty if not the same history as the St. Louis Cemetery No. 1.

A brief teaser for some of the sculptures in the St. Louis Cemetery No. 3 …. 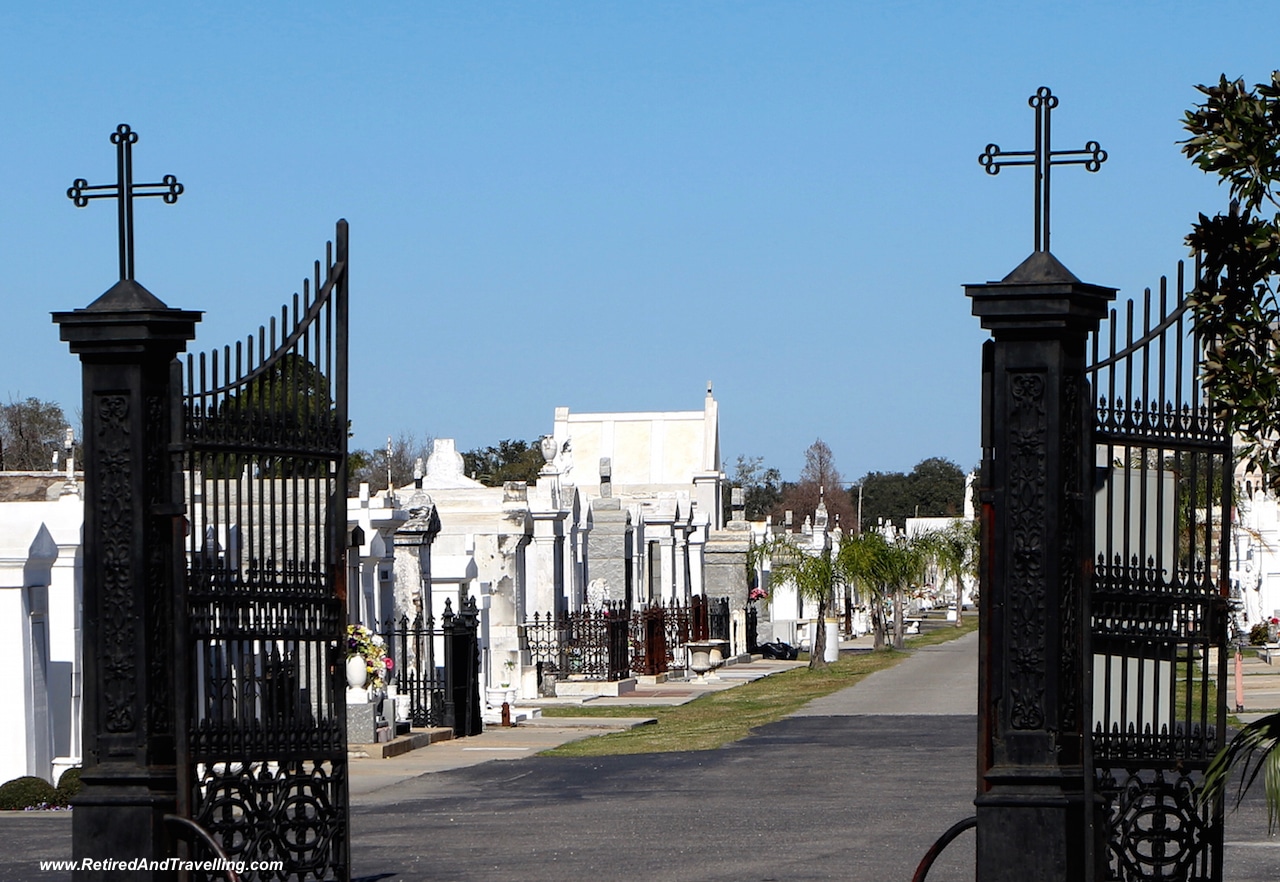 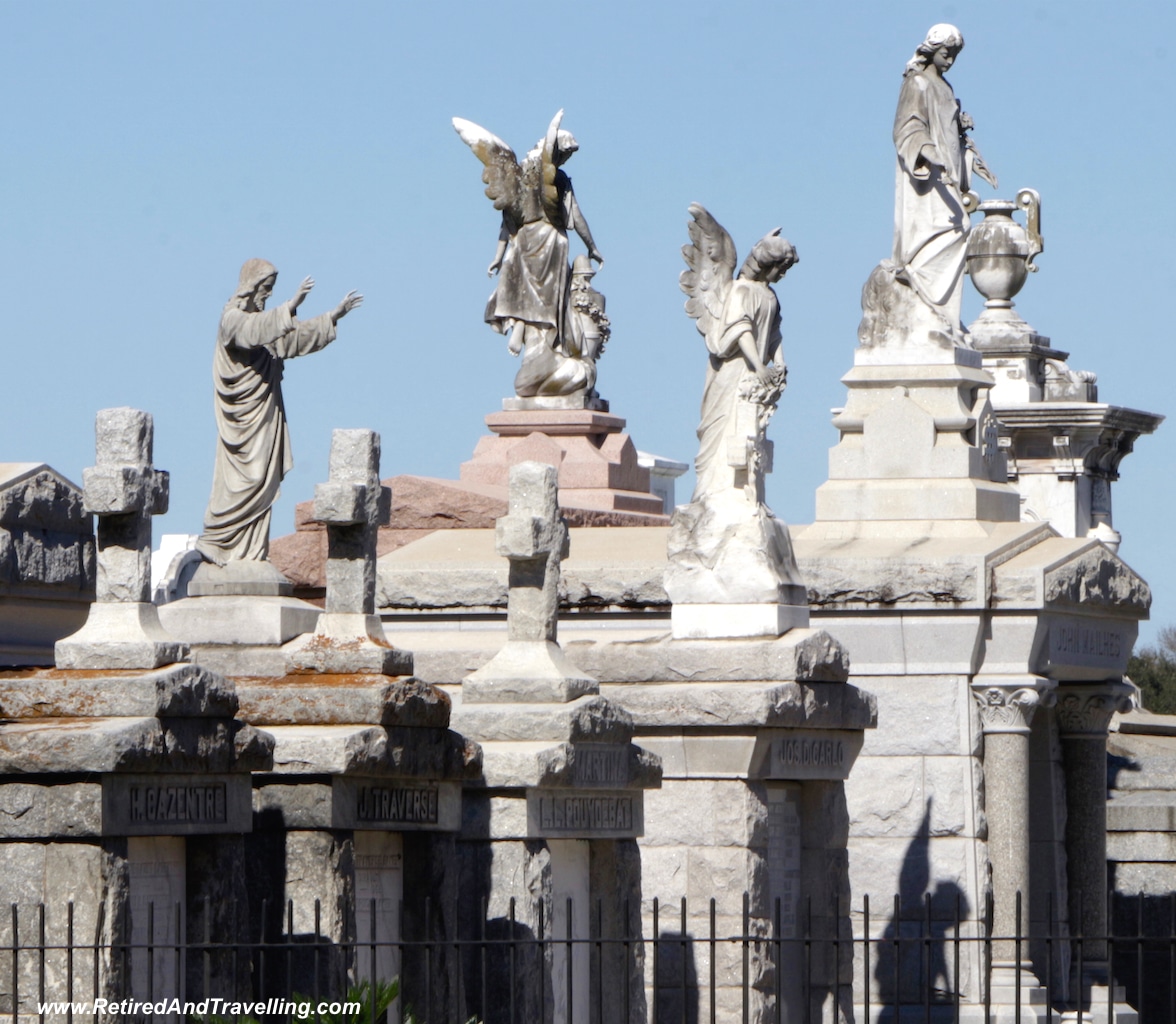 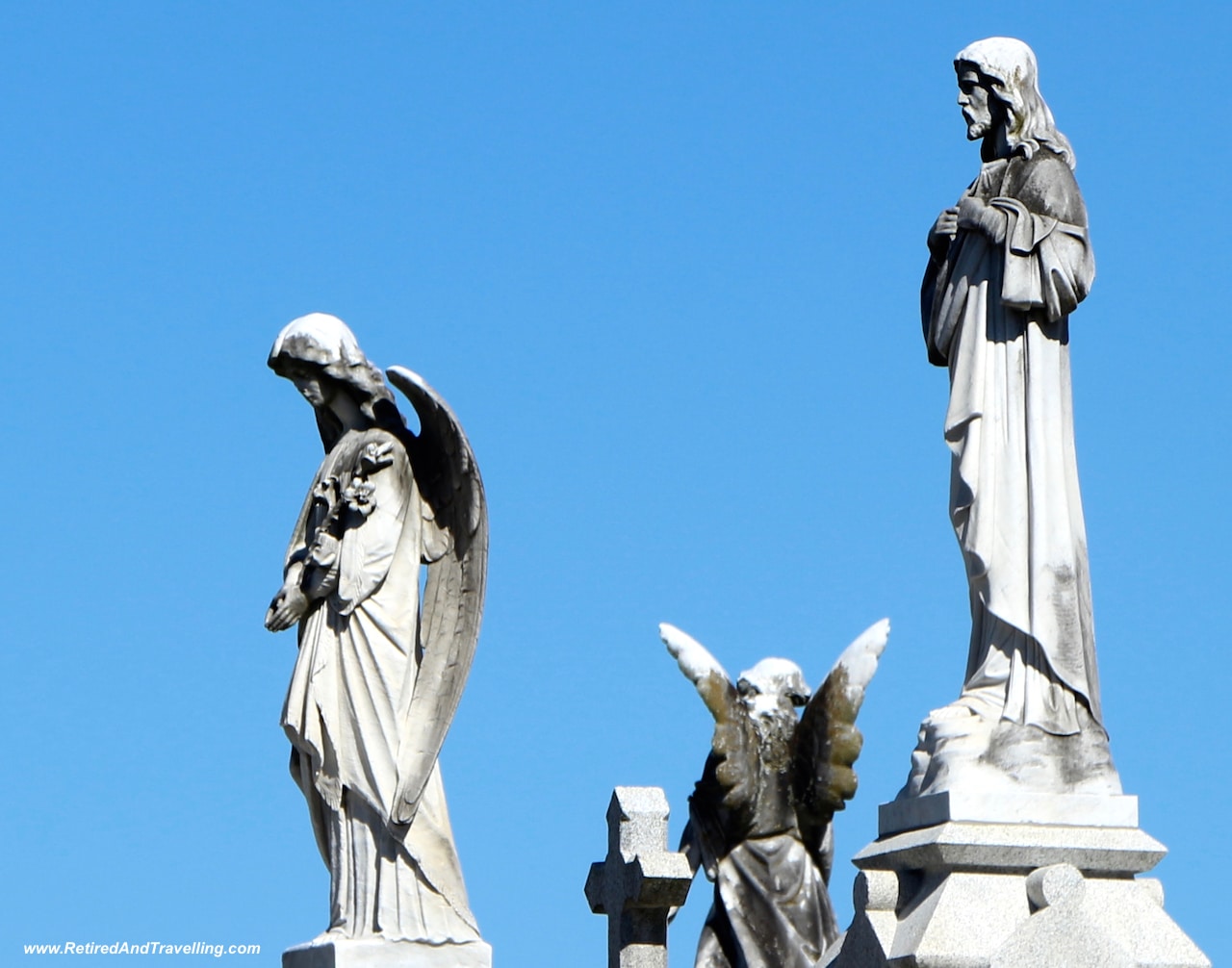 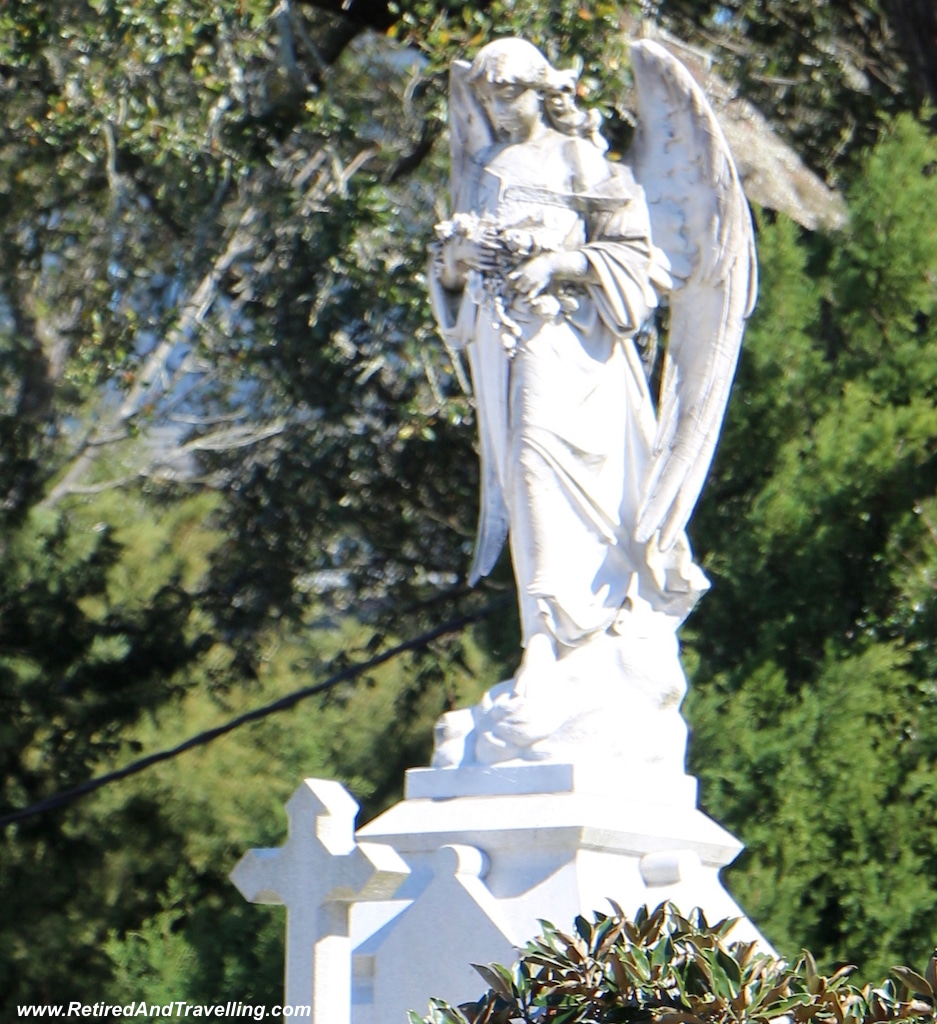 New Orleans history Through The dead In St. Louis Cemetery No. 1

We enjoyed learning some New Orleans history through the dead in the St. Louis Cemetery No. 1. The above ground cemeteries are not just a source of great history but also can provide an artistic tribute to the dead. We had seen many sites in France with above ground burial but had never spent any real time really learning about the cemeteries. Don’t forget you will need a tour guide to visit the No 1 Cemetery in New Orleans. The No 3 site appeared to be open to stroll around at will. And don’t expect a ghost tour unless you specifically are booking a ghost tour!

This was one of the great thing to see in New Orleans.  Plan to visit whether you are in New Orleans for Mardi Gras or visiting at another time of the year.

Have you explored New Orleans history through the dead? Did you visit this and other cemeteries when you visited? 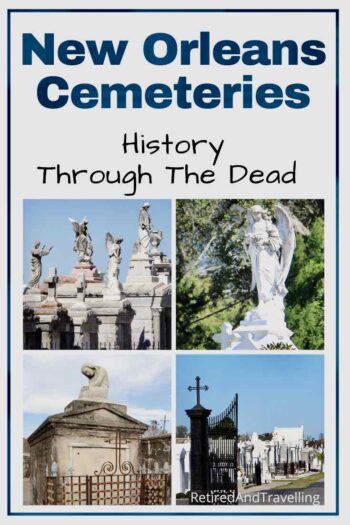 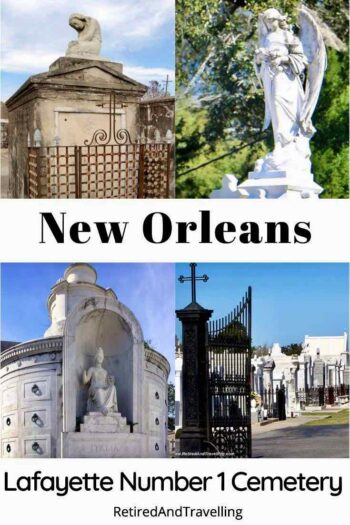