We saw panoramic Bern from the Gurten Funicular and got a great perspective on the city.

We always liked to head high for a panoramic view in a new destination. There were many opportunities on this tour around Central Europe. When we started our visit to Prague, we went to the top of the Petrin Tower. Later when we visited the countryside outside of Cesky Krumlov in the Czech Republic, we went to the Lipno Lake ski area and walked high above the treetops. From there we saw clear to Germany. On a day trip from Zurich to Shaffhausen, we walked up to the Munot Fortress for a great view.

We could not miss the opportunity to take the funicular in Gurten for a panoramic view of Bern.

As we wandered around Old Town Bern, we saw the Gurten Mountain high above the town. We knew it would be a great spot for panoramic views. 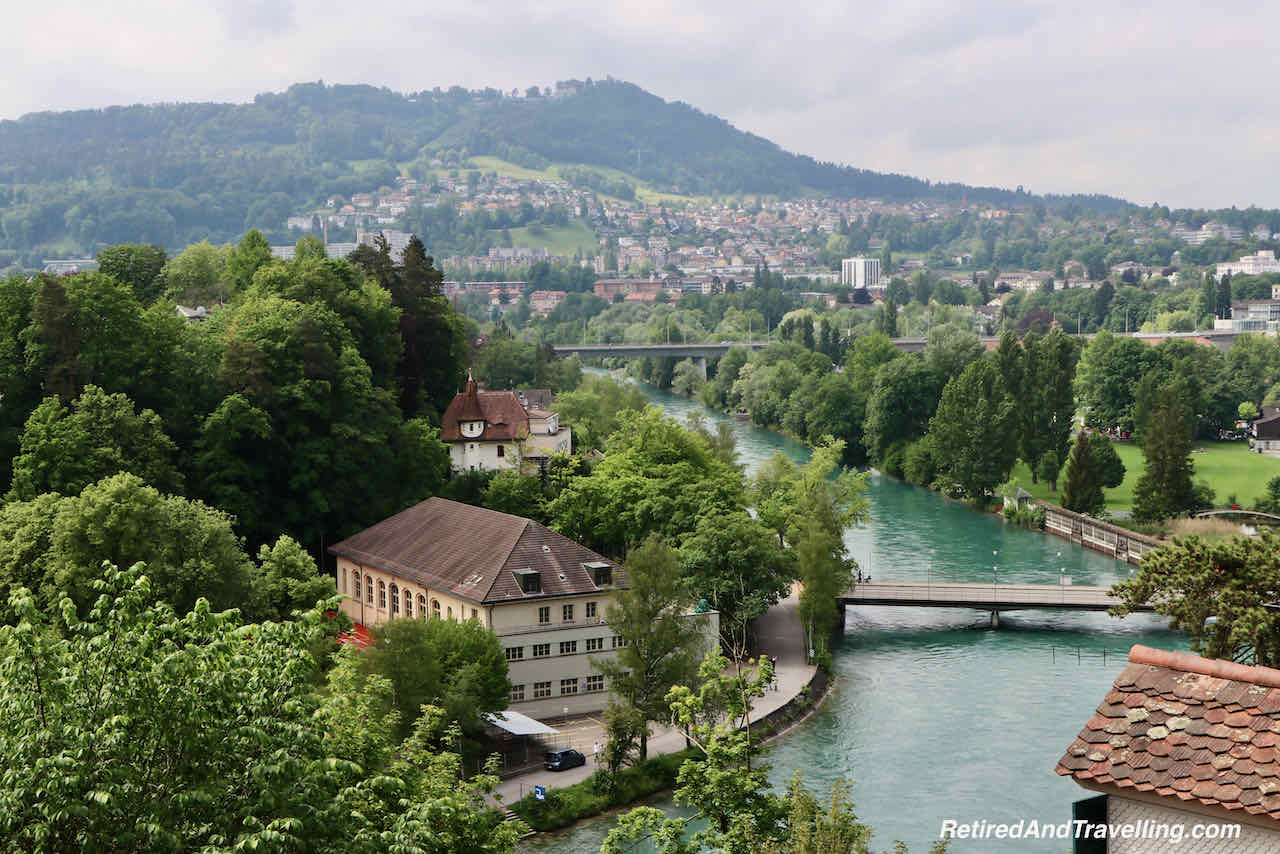 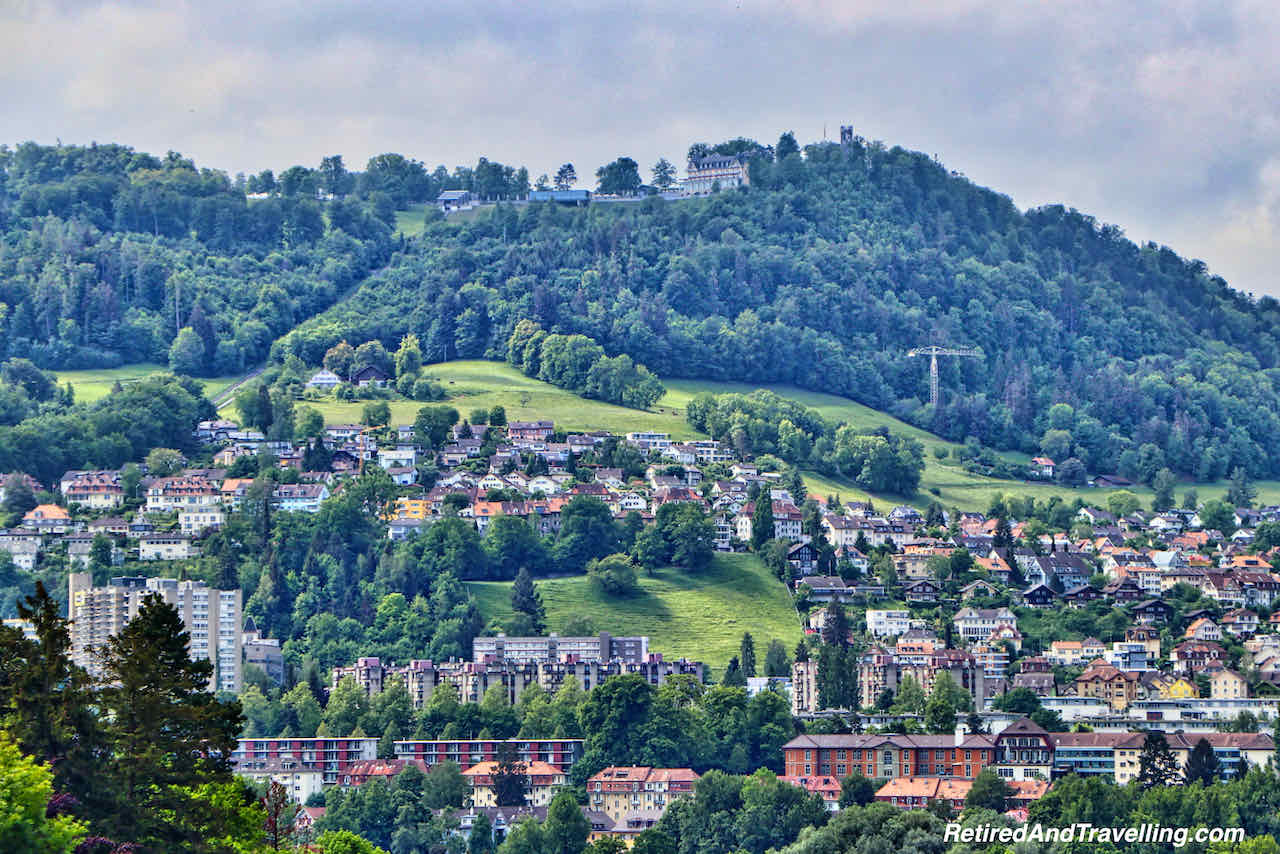 It was easy to find the funicular at the bottom of the Gurten Mountain. The #9 tram went to Wabern. The Gertenbahn stop was 2 stops before the end. We could also take a train to the Wabern station. We got a Bern Transport Card from our hotel. It covered the tram or train ride. It also covered the funicular ride up and down the Gurten mountain.

We arrived by tram and enjoyed the view as we wandered through the small town of Wabern. It was a short walk uphill to the funicular stop. 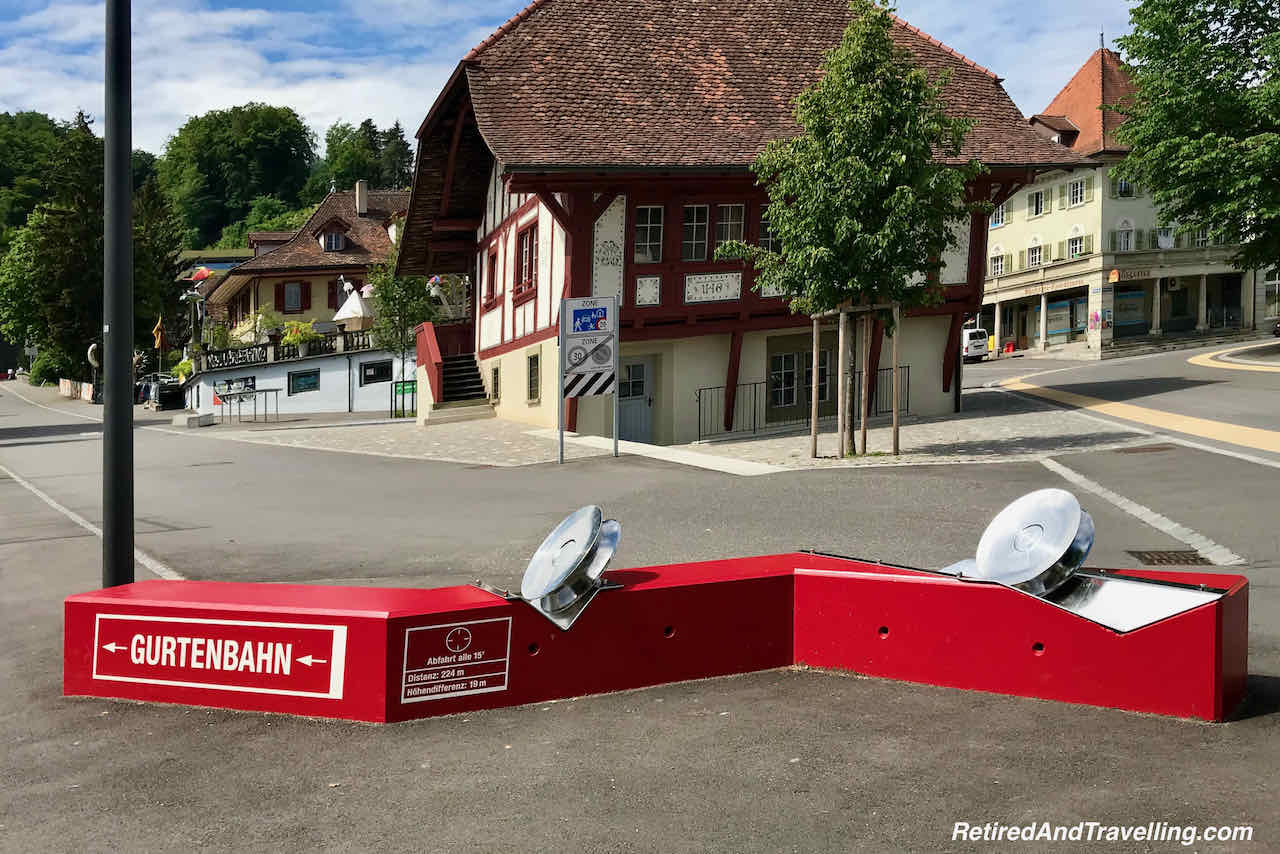 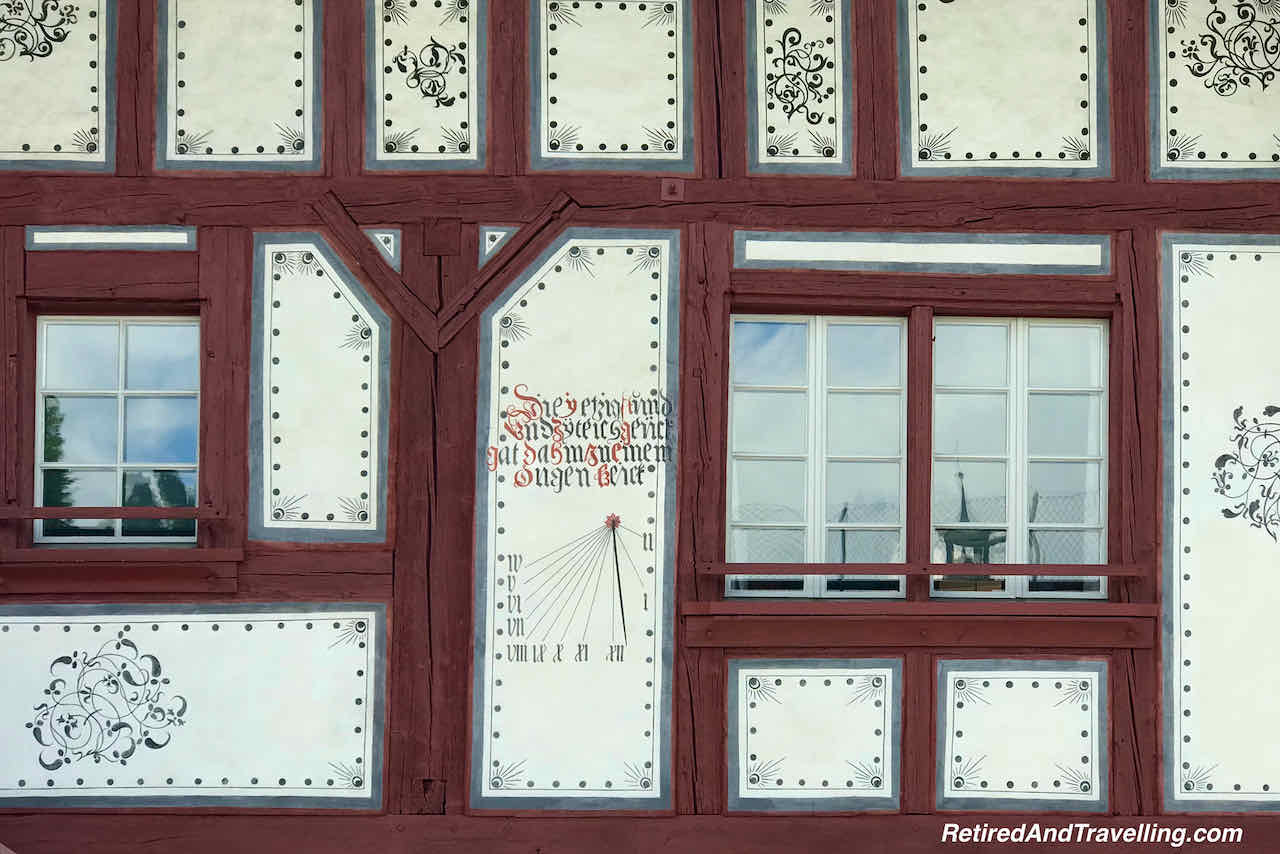 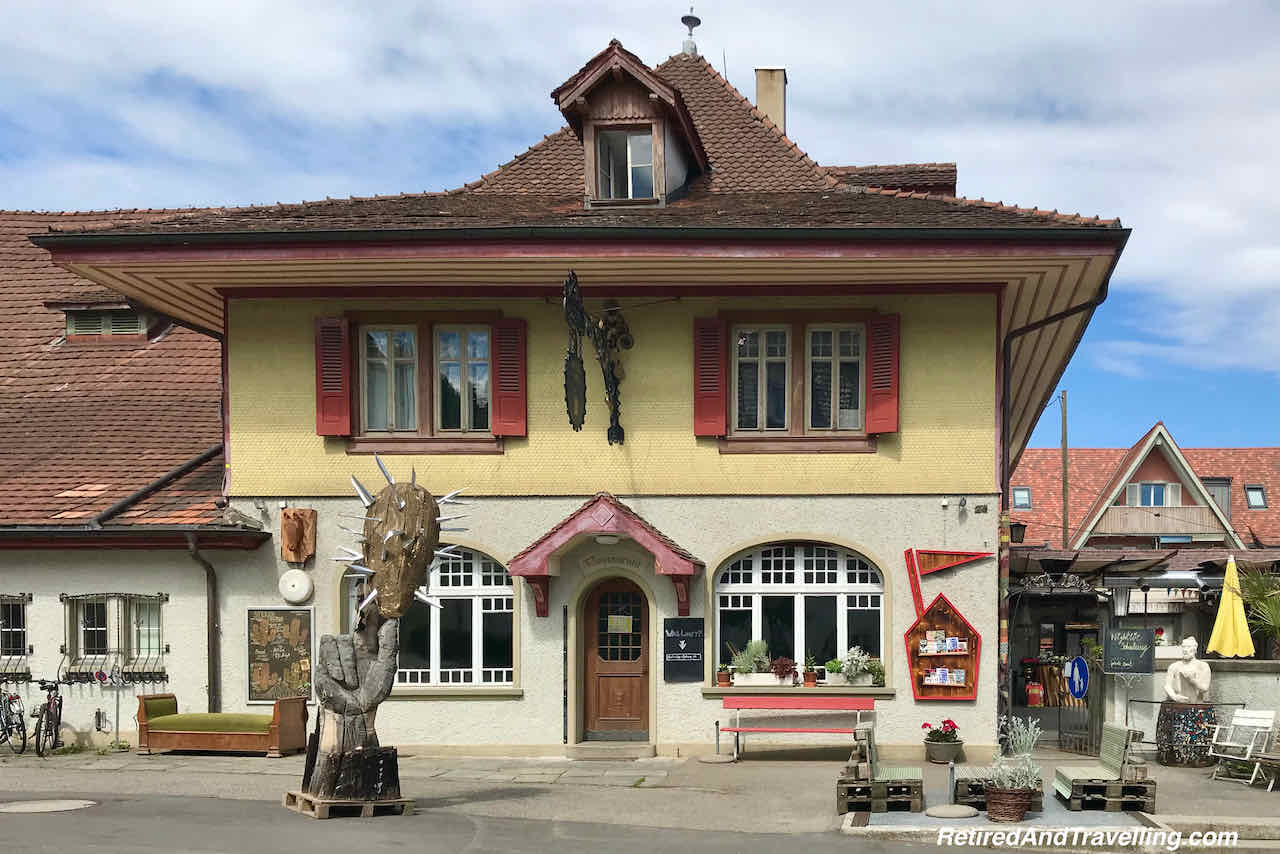 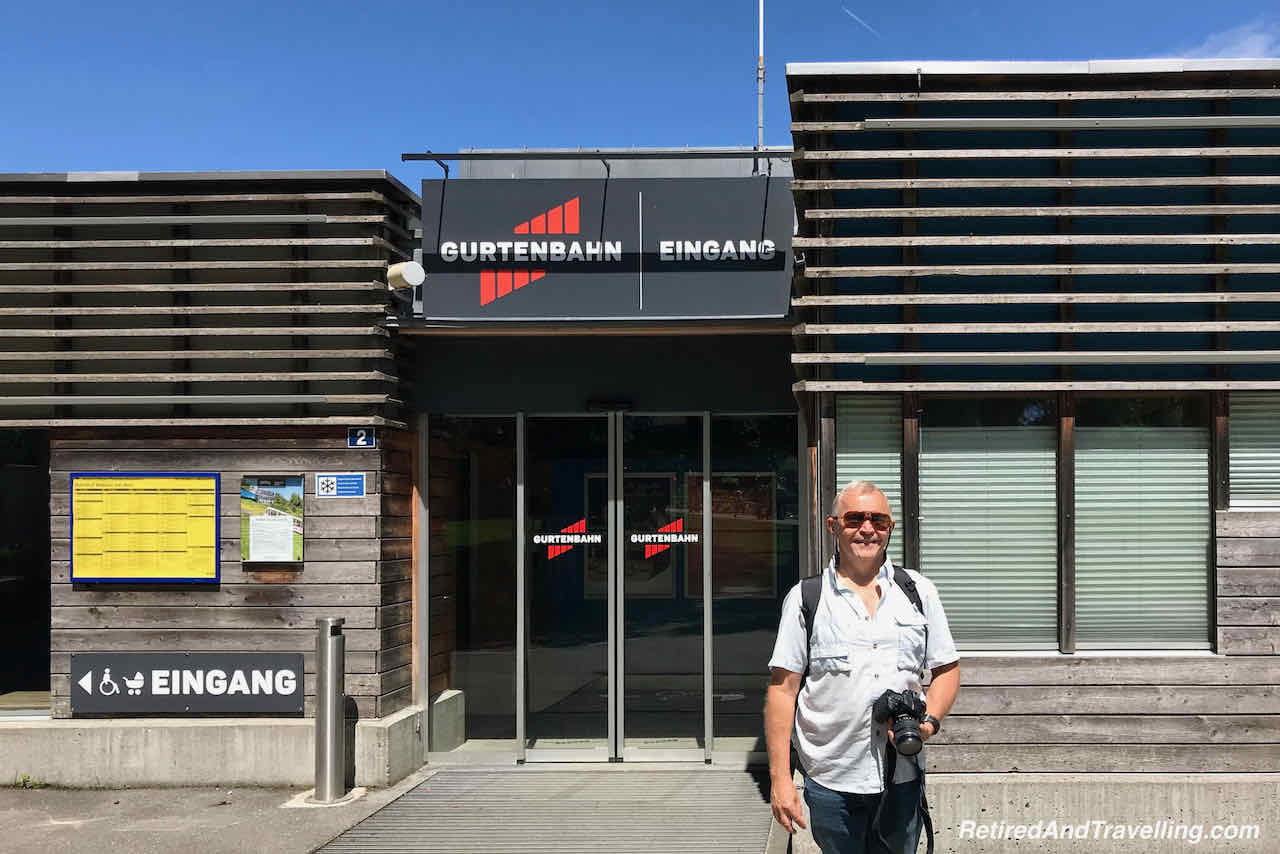 Once we reached the Gertenbahn Funicular, we joined the long line. It was a holiday in Switzerland and we were not the only ones going up the mountain. Mountain bike riders took the easy path up. And the fun path down! 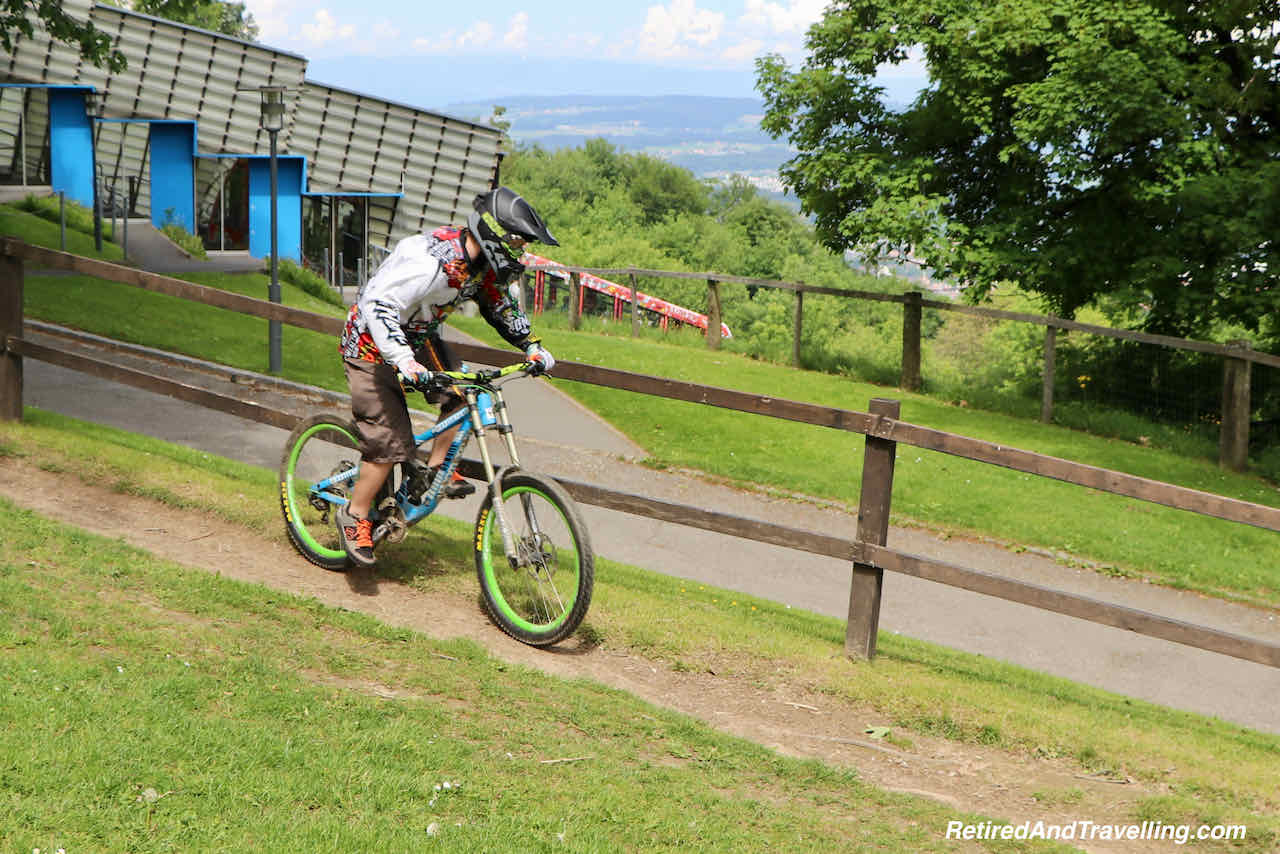 It was easy to head out for a view of panoramic Bern from the Gurten Funicular.

Up The Gurten Mountain For The Views

We took the funicular in Gurten for a panoramic view of Bern and we were not disappointed. When we left the funicular, we looked for our first view down. Far below us we saw the Old Town of Bern that we explored on our first day in Bern. 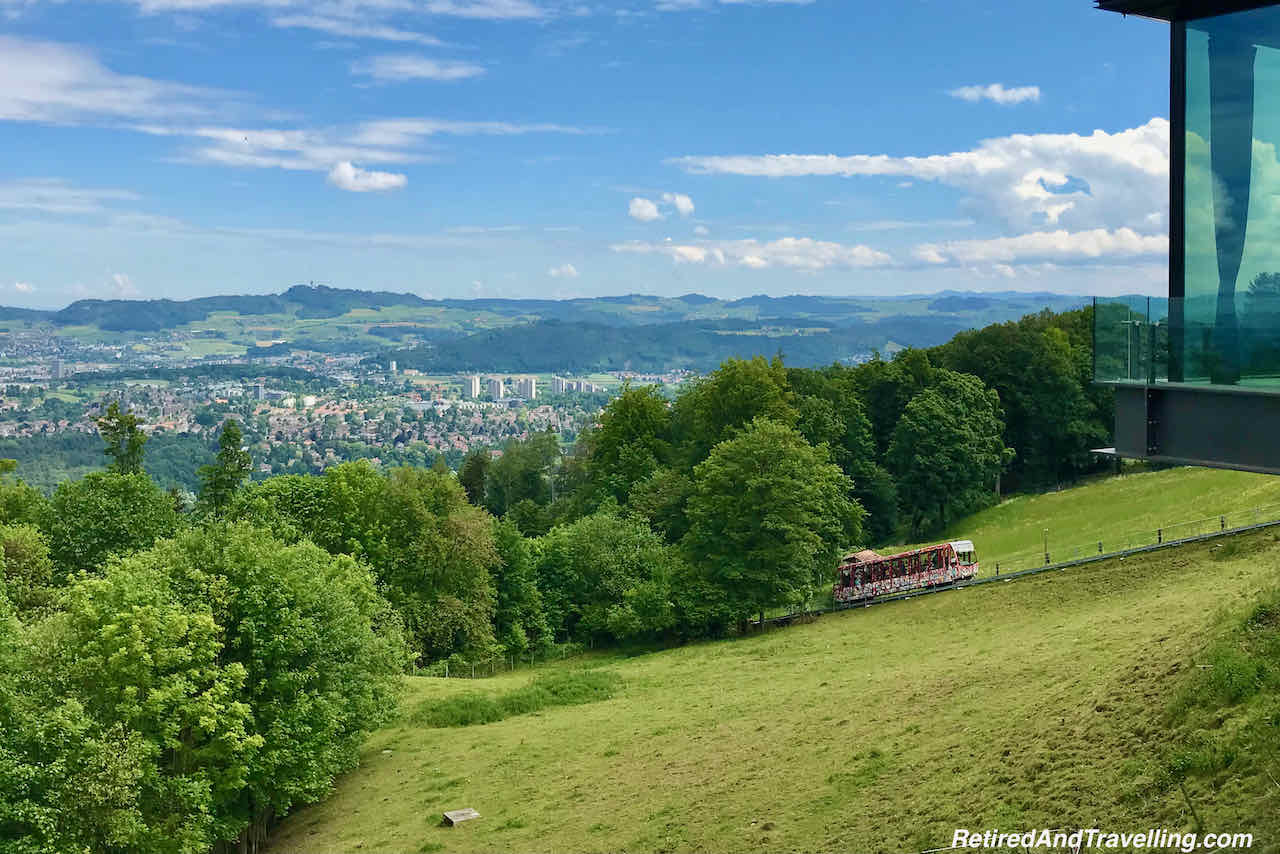 There are several different spots around the top of the mountain for panoramic views. We kept walking up until we found the tower. It reminded us of the tower we walked up at Lipno Lake. It stood yet another 122 steps up. We walked the circular steps to the top. Small children and a dog or two also made the trek up. 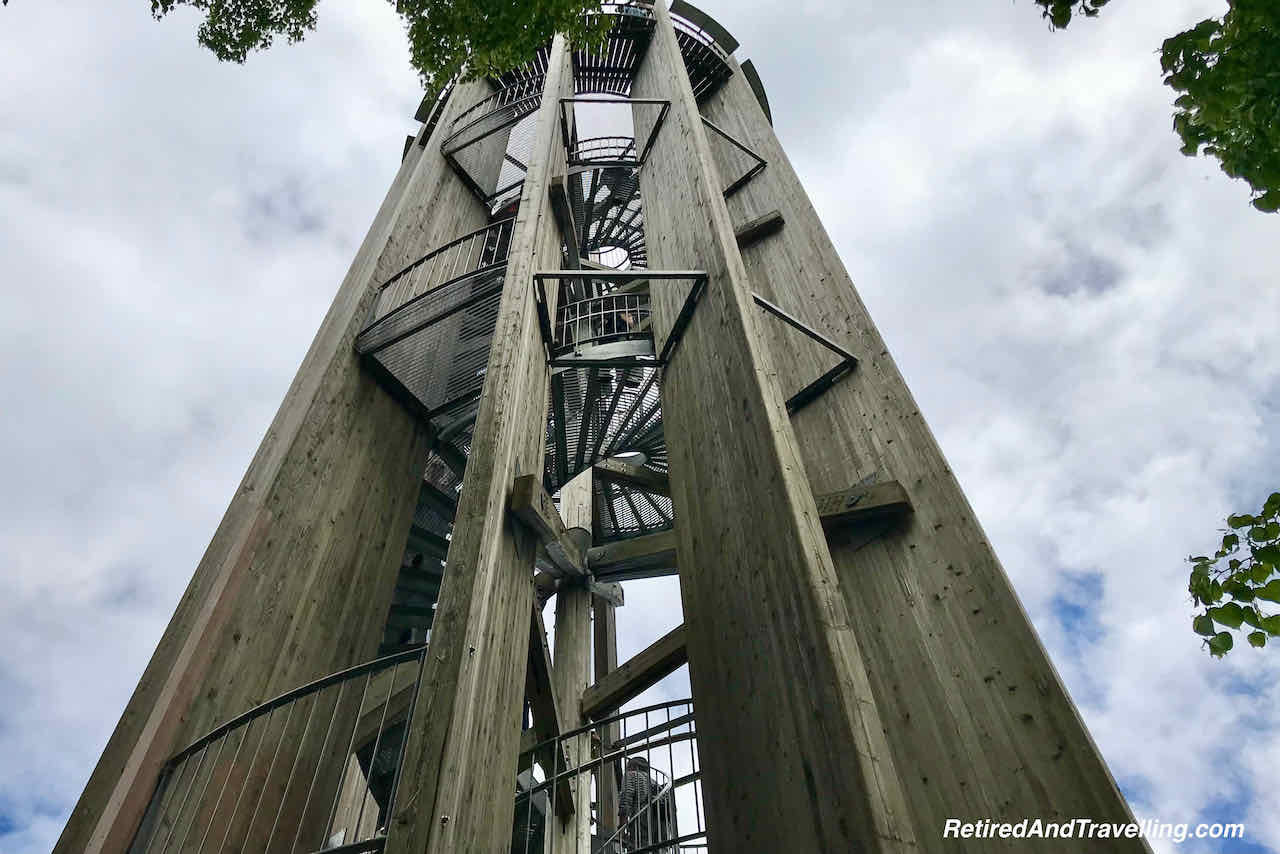 At the top we got a great 360° view. In front of us we got a view down over the city of Bern. It was easy to see the Federal Palace perched high above the Aare River. We saw the spire of the Muster Church in the heart of Old Town. On another side we got a view of the park at the top of Gurten Mountain. And on another side, we saw the snow tinged peaks of the Swiss Alps. 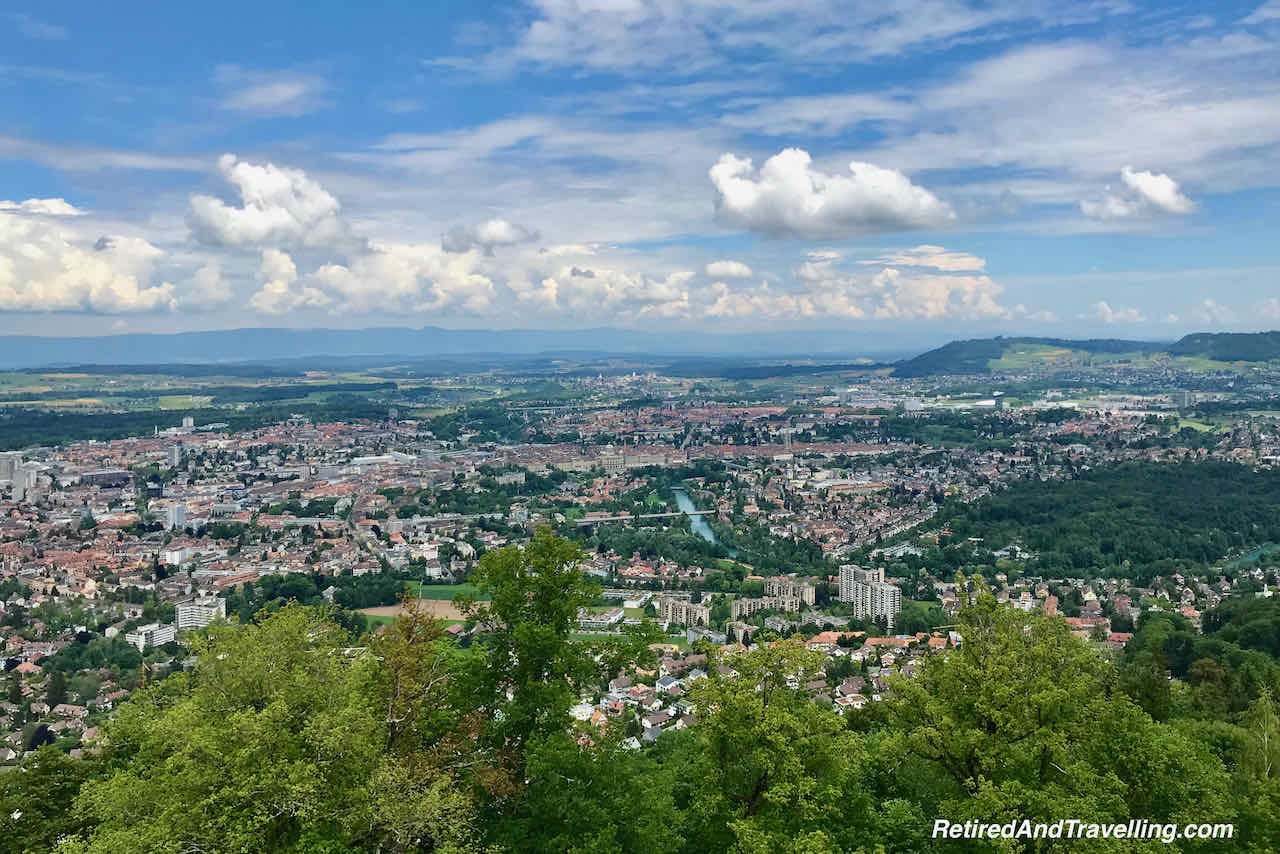 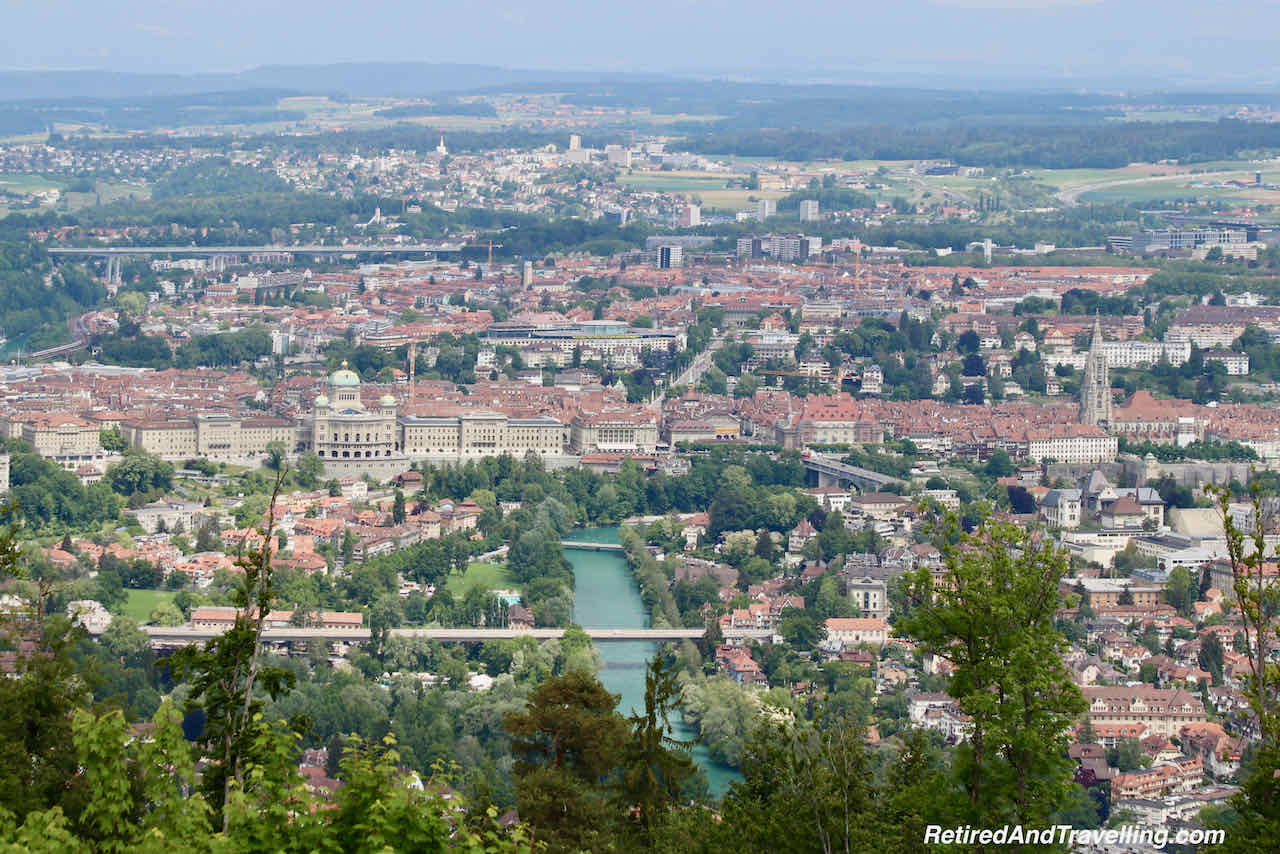 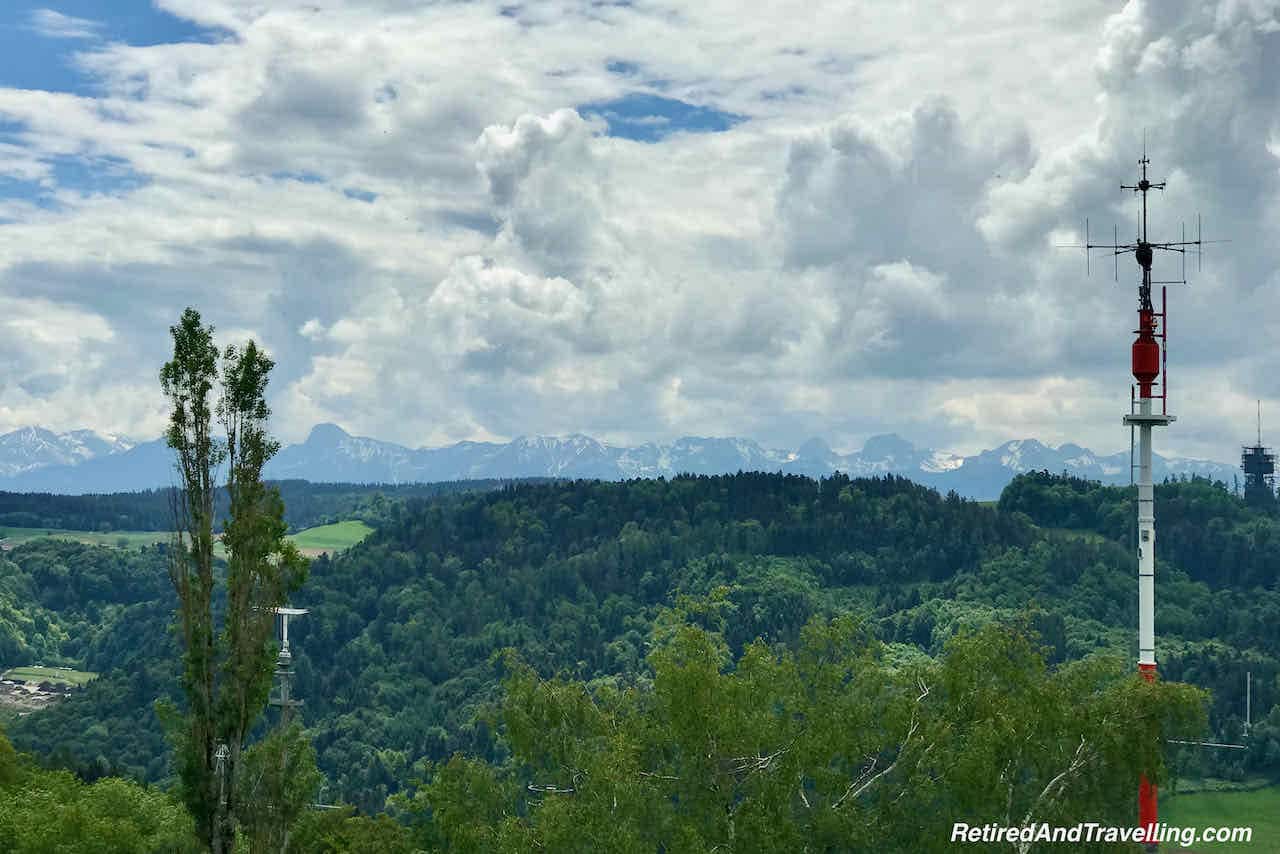 When we took the funicular in Gurten for a panoramic view of Bern we found the tower and climbed it. The view in all directions was worth the extra effort.

Enjoy Your Visit To The Gurten Mountain

There were several spots to eat and take in the view at the top of Gurten mountain. One of the restaurants was closed but the other was open. Two kiosks offered hot bbq food, drinks and gelato. We found two big patios with umbrellas. Picnic tables were spread around. Some people brought a picnic and enjoyed the green space on Gurten Mountain. 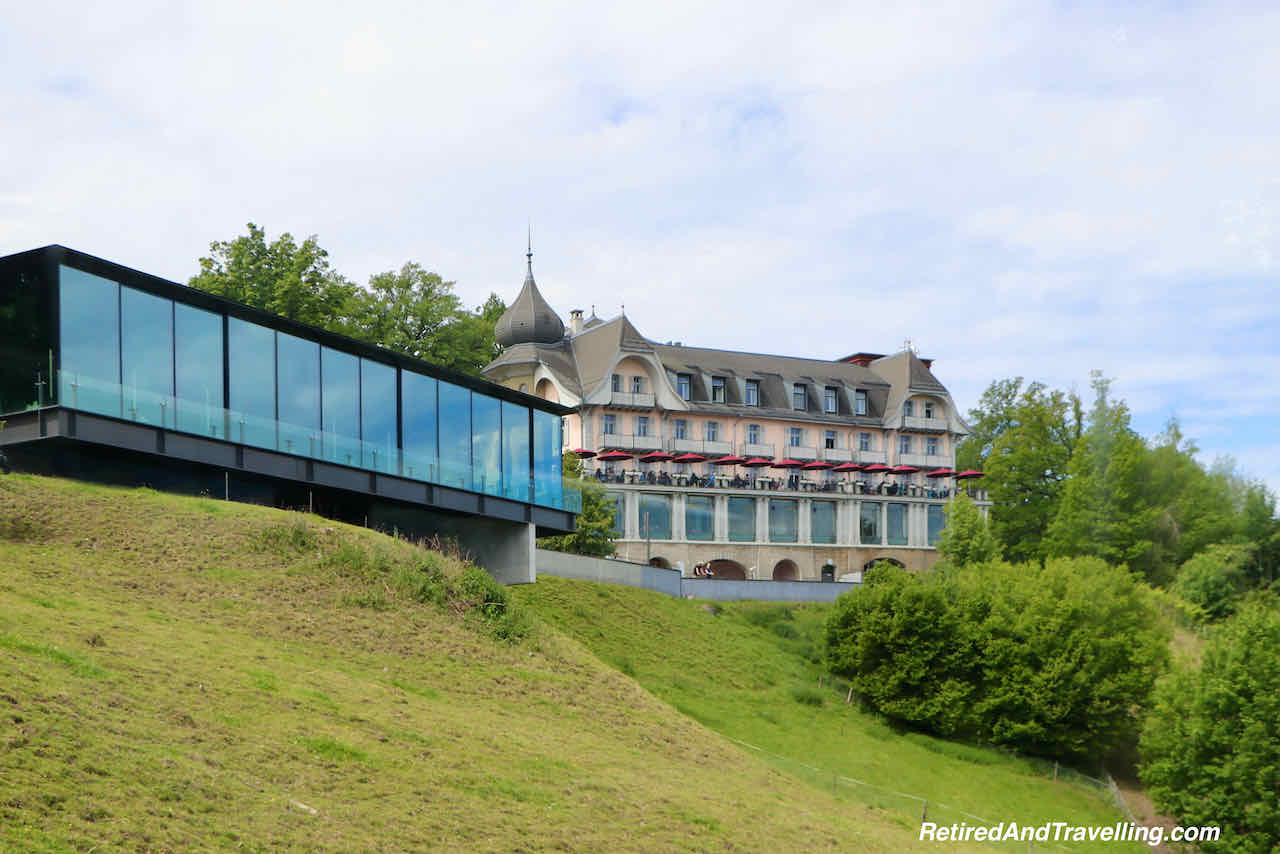 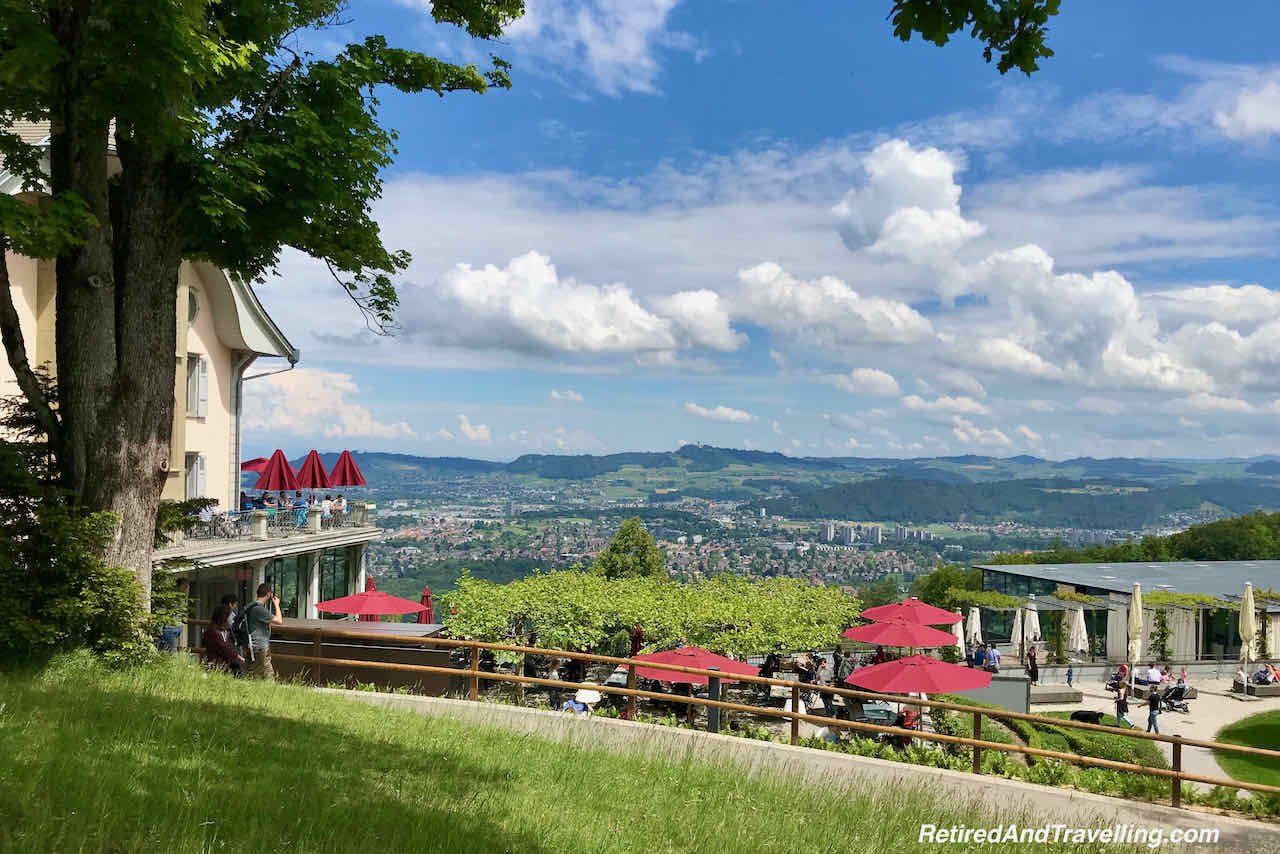 As we walked around the park, we noticed an interesting array of colourful art and metal sculptures. Much as we saw when we walked in Bern, the statues were more modern art. They did not seem to be historical figures or memorials. 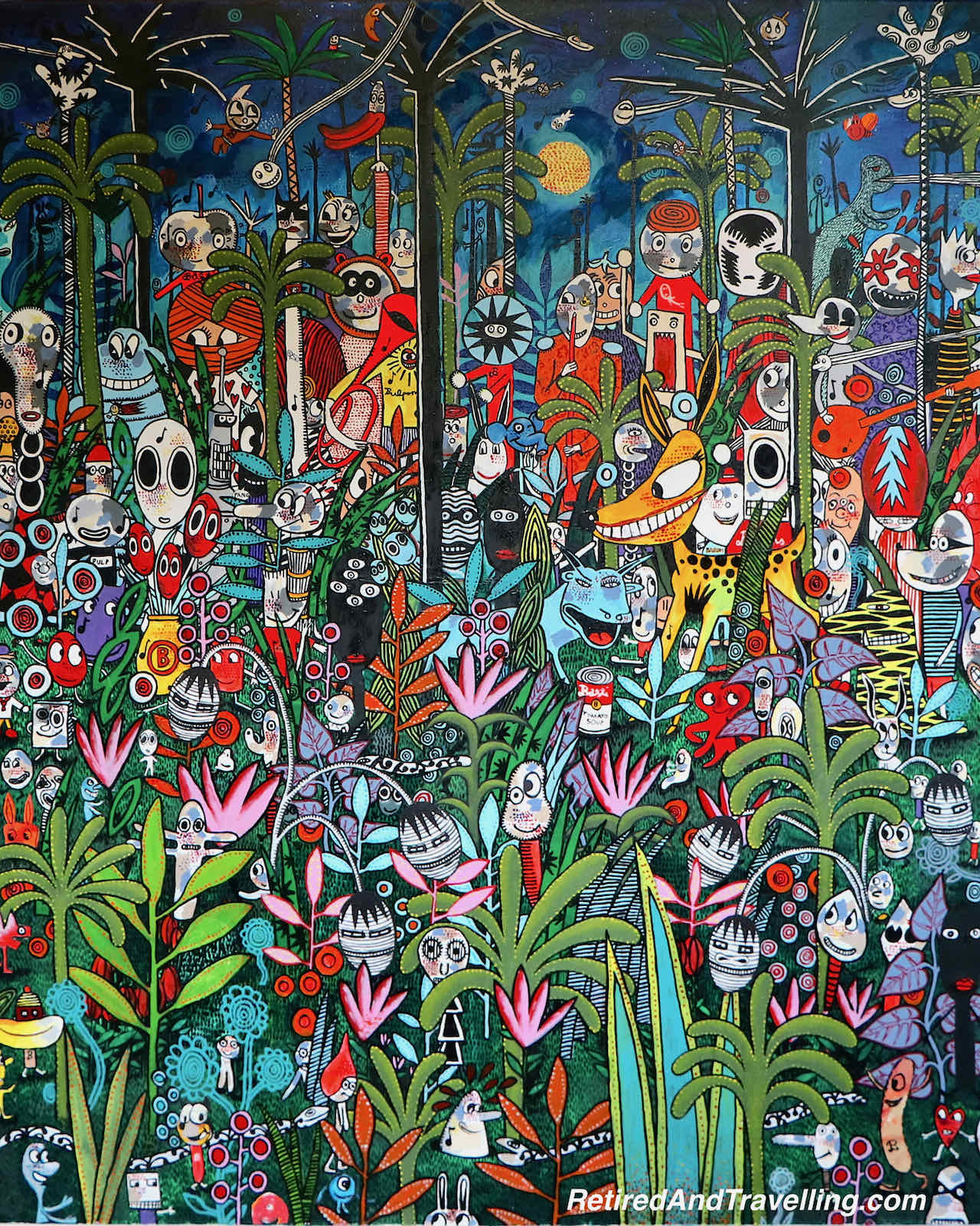 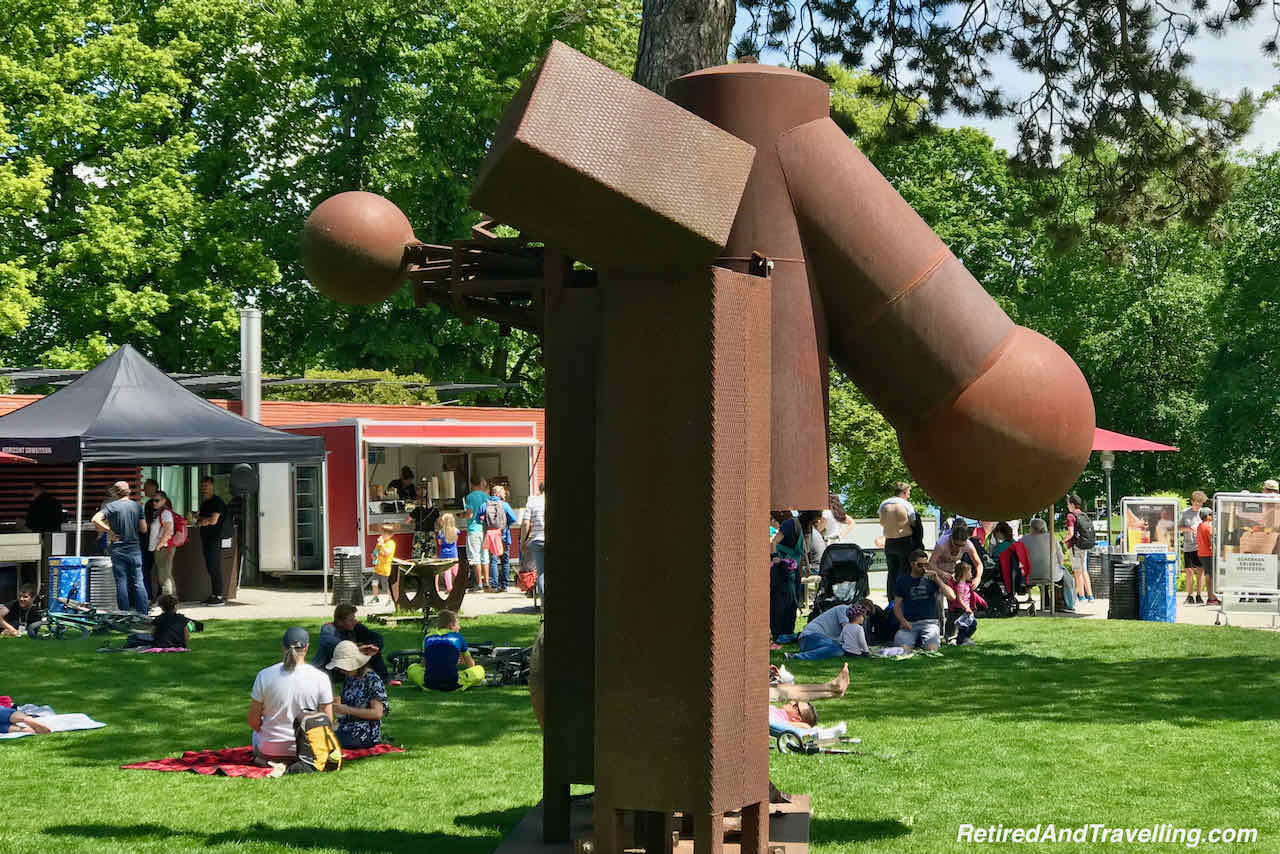 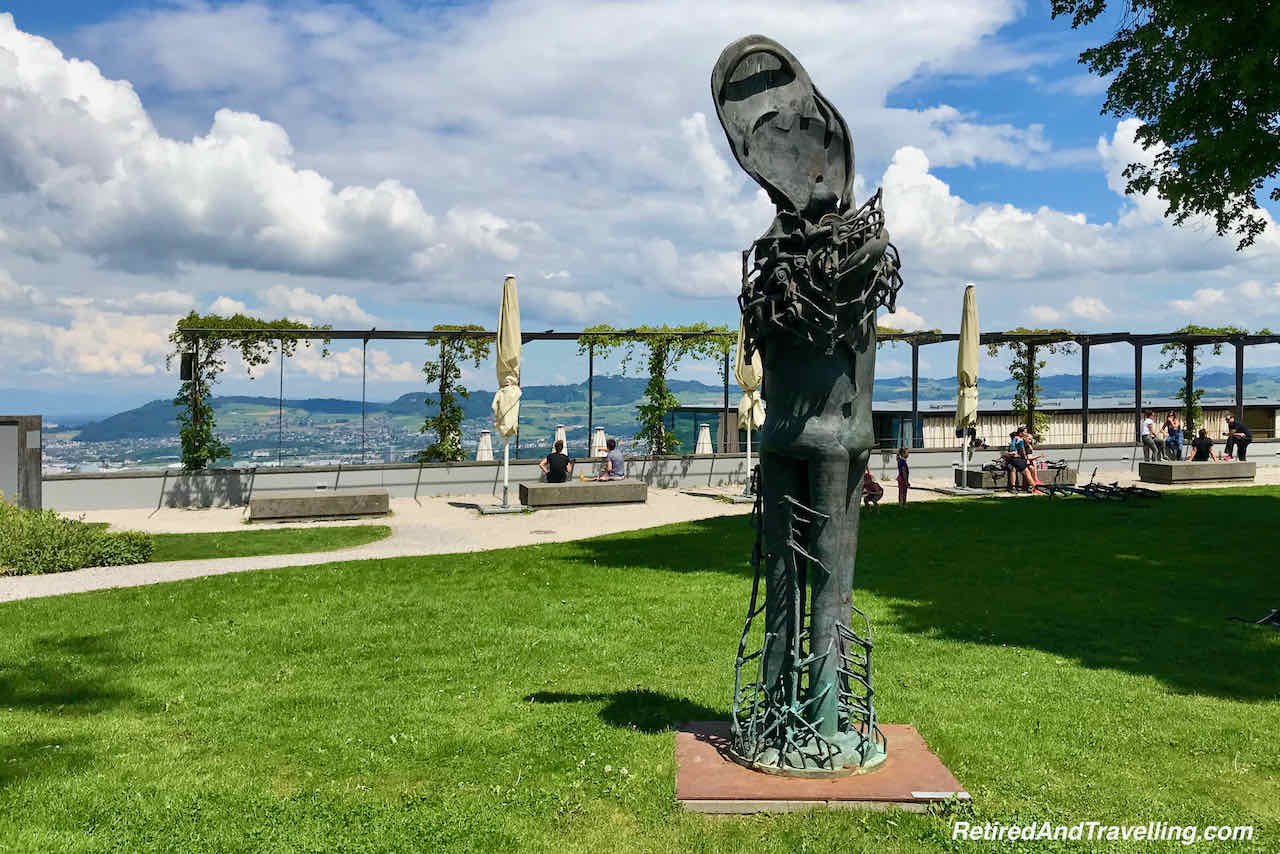 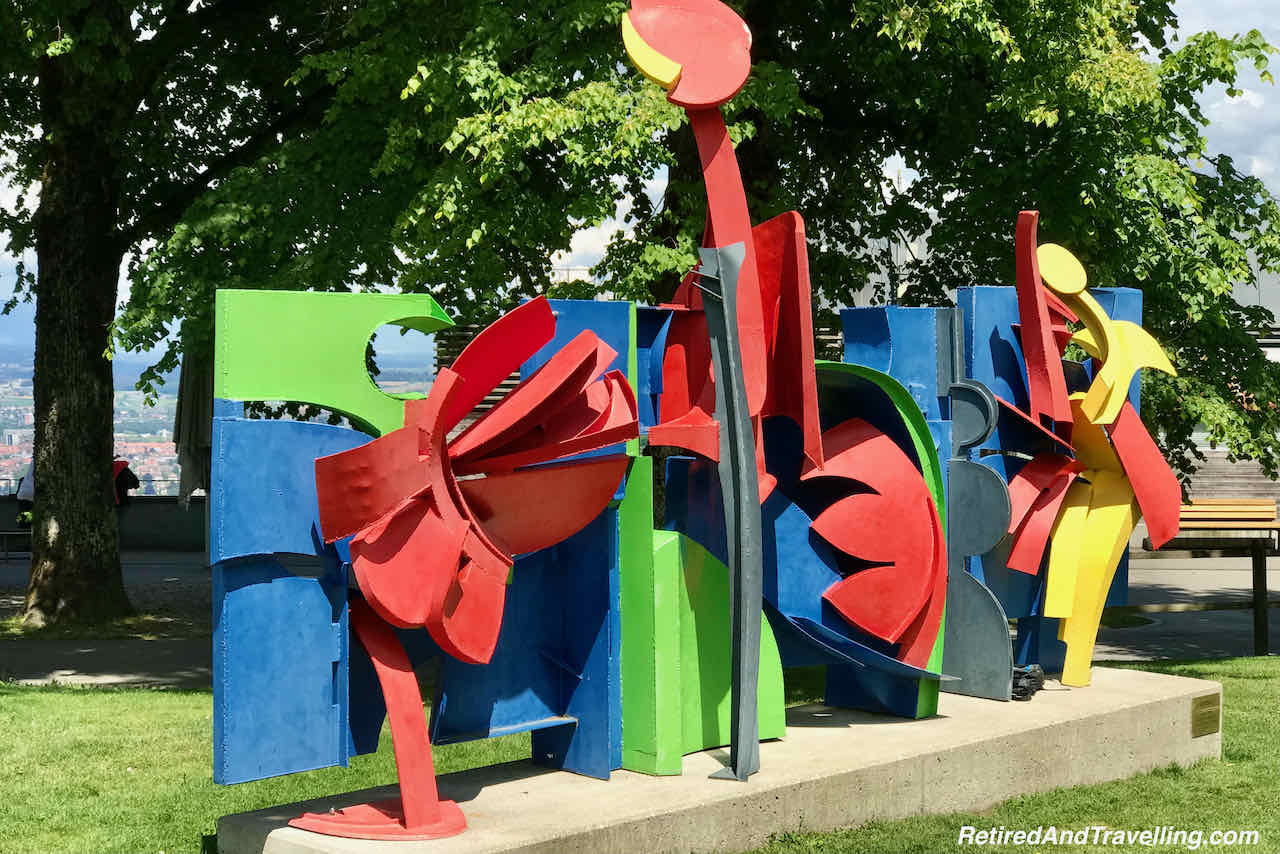 We visited at mid-day. When the clouds started to darken the sky, we headed back down. But we were sure that panoramic Bern from the Gurten Funicular at sunset was stunning!

We went up the funicular in Gurten for a panoramic view of Bern. But many of the families enjoyed the fun activities at the top for kids. The first thing we saw was the toboggan ride. A metal track ran down the hill and people sat on toboggans. Smaller kids went in the laps of the adults. It looked like a lot of fun. I almost joined the kids for a ride. 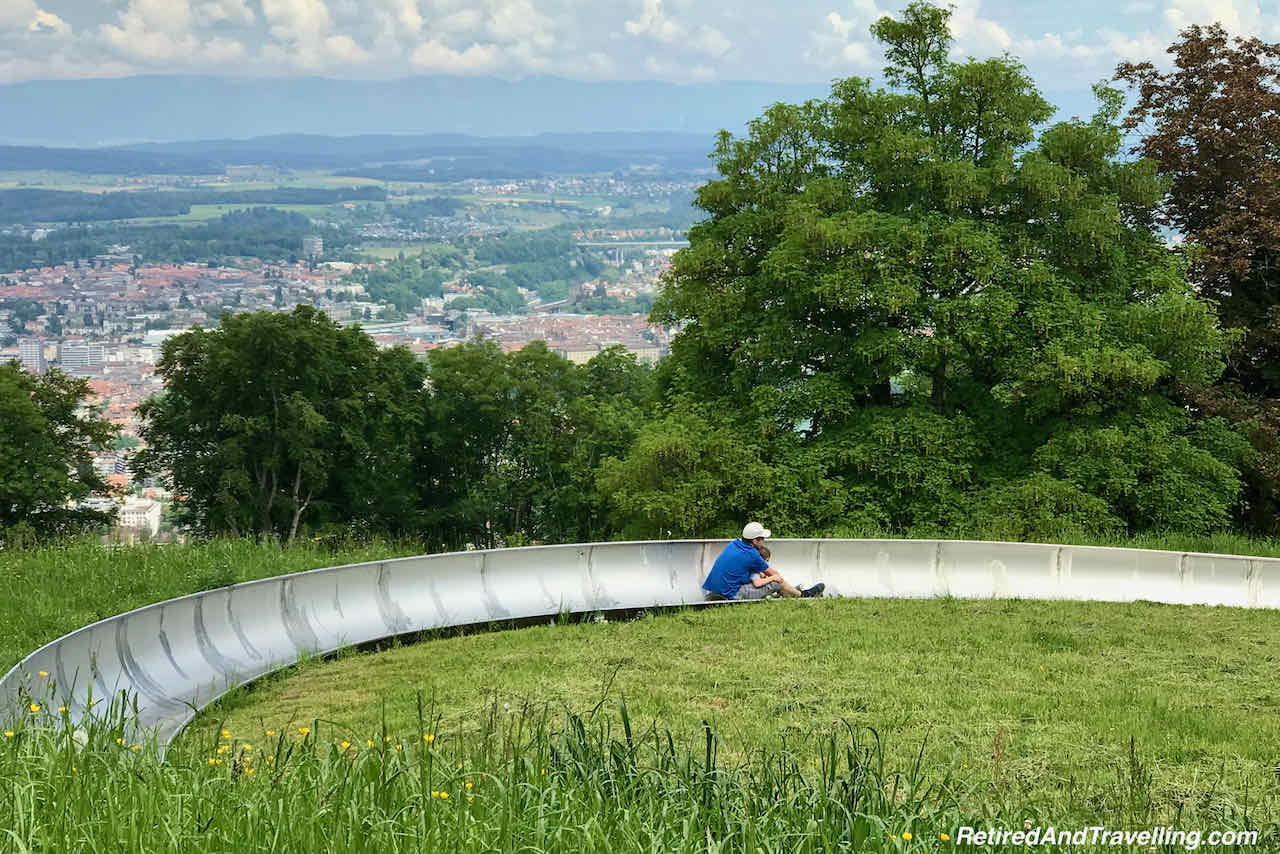 There were two different trains that circled a park area for smaller children. There were climbing structures, sand piles and water troughs for the kids to play. 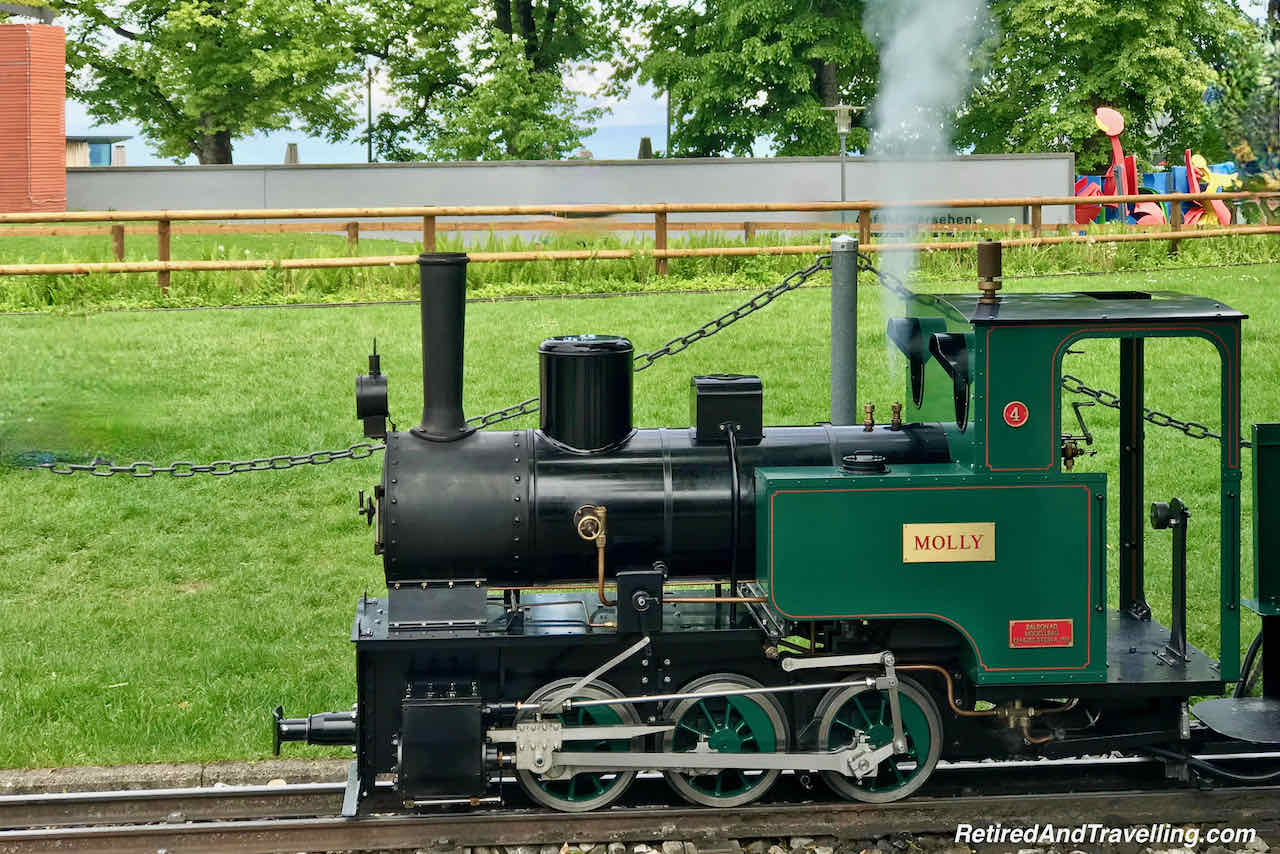 On a holiday Monday, the park on the Gurten Mountain was a great place for the families.

A visit to the Gurten Mountain was not the first thing we did on our visit to Bern. But we were definitely glad we headed high and saw panoramic Bern from the Gurten Funicular. Seeing the city and surrounding countryside gave us a new perspective on this great town.  We were excited to visit Interlaken next and see the panoramic views of the Swiss Alps from Harder Kulm.  Getting panoramic views were definitely one of the iconic things to do in Switzerland!

Did you see panoramic Bern from the Gurten Funicular? Did you stay for sunset? 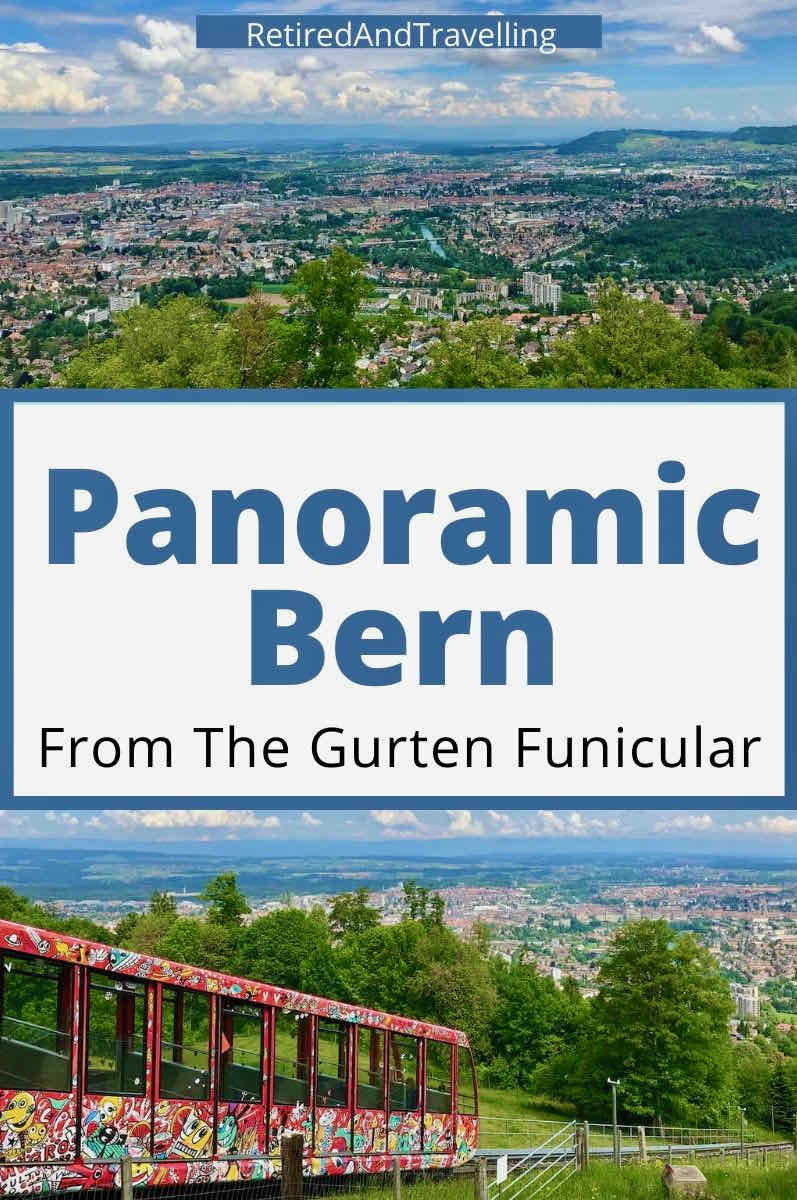 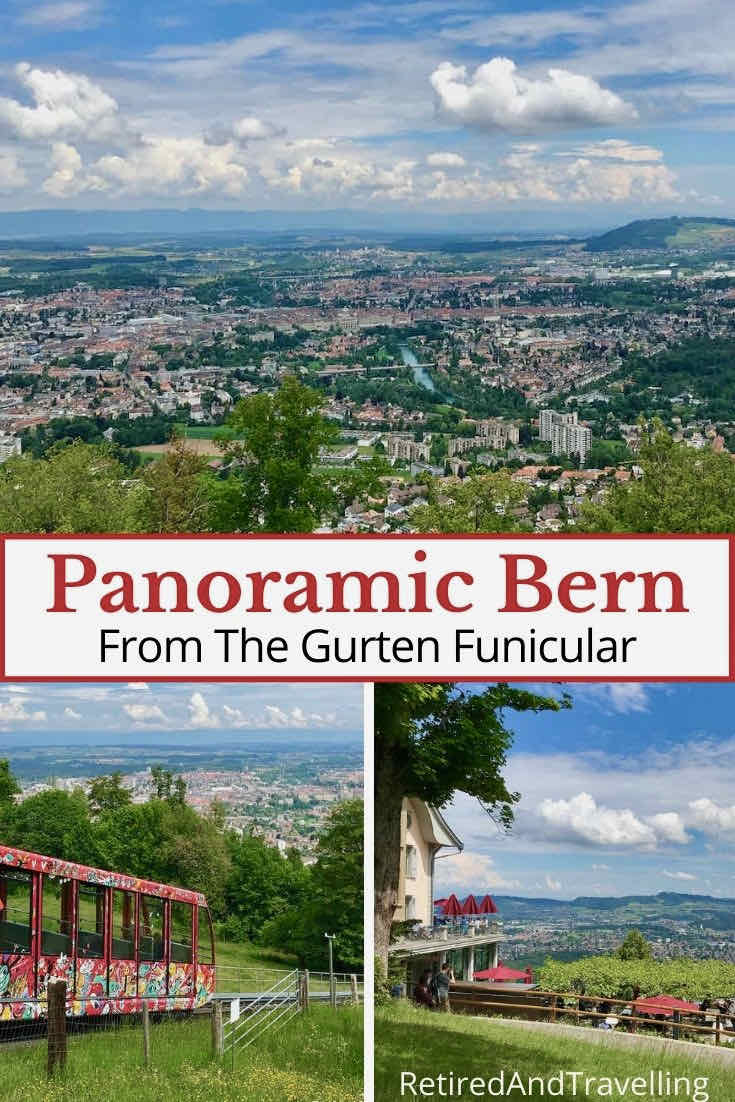 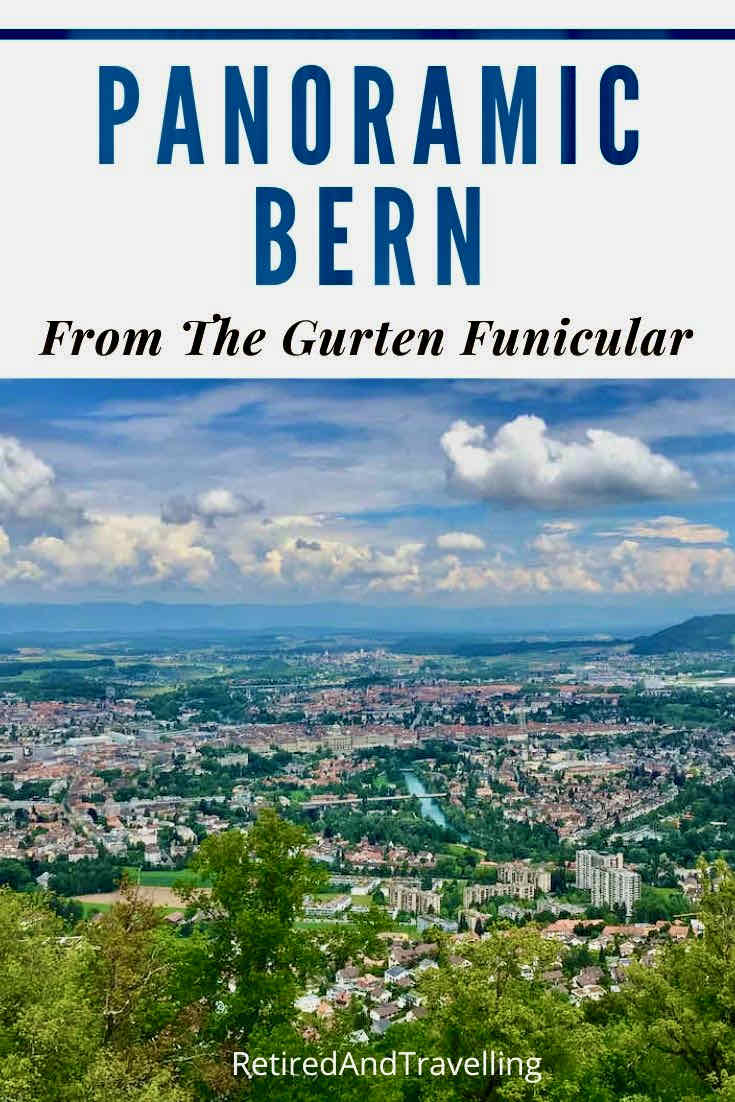 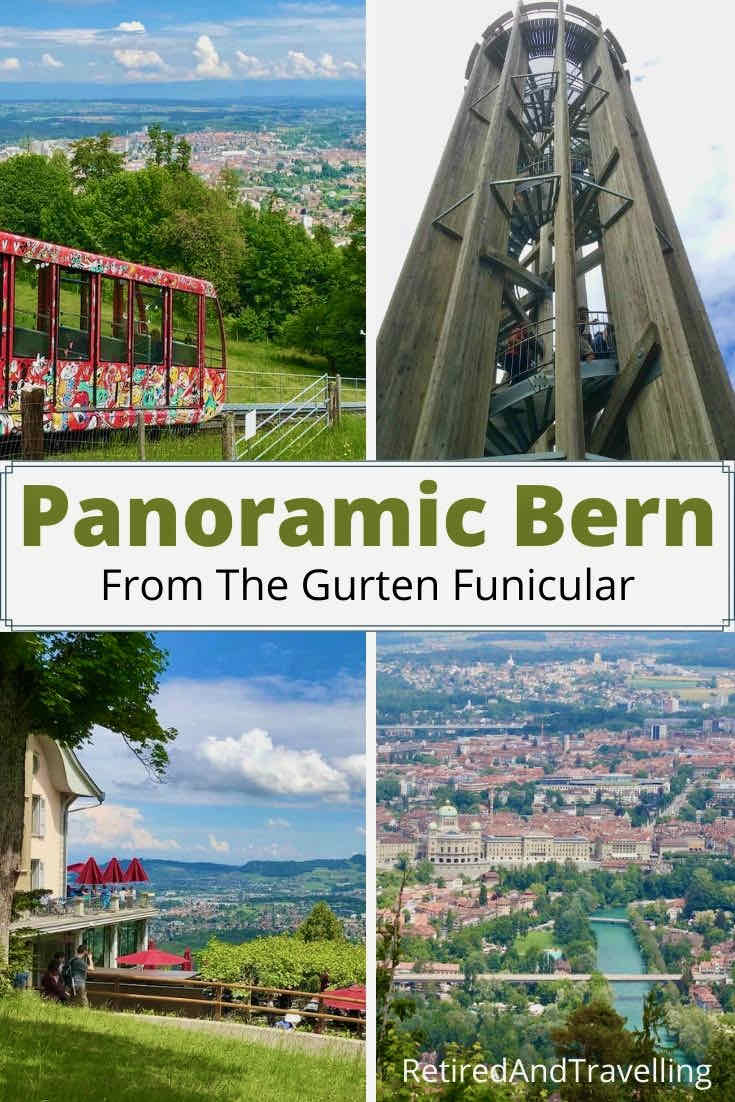