Two Days For A Photo Stop In Bilbao Spain

We were docked in Bilbao, Spain for two days. Unfortunately the weather stayed mostly cloudy and rainy. So we really only did a photo stop in Bilbao when we visited with Oceania Cruises!

Our previous stop was two days in Bordeaux, France. The next planned stop on our itinerary was supposed be St Biarritz in France. St Biarritz was a tender port and the captain watched the weather. After consultation with head office, it was announced that we would skip the St Biarritz stop and go straight to Bilbao in Spain.

With no excursions booked for Bilbao, we planned to wander on our own. So when the rain finally let up for a bit, we did just a short photo stop in Bilbao.

The Bizkaia Bridge At The Port In Gexto

The ship landed in Spain at the port in Gexto. This was a big port just outside of Bilbao. The long pier jutted into the bay and there was a lighthouse at the end. Many people walked off the ship in the port area. There was a small aquarium close to the port and a strip of port bars. 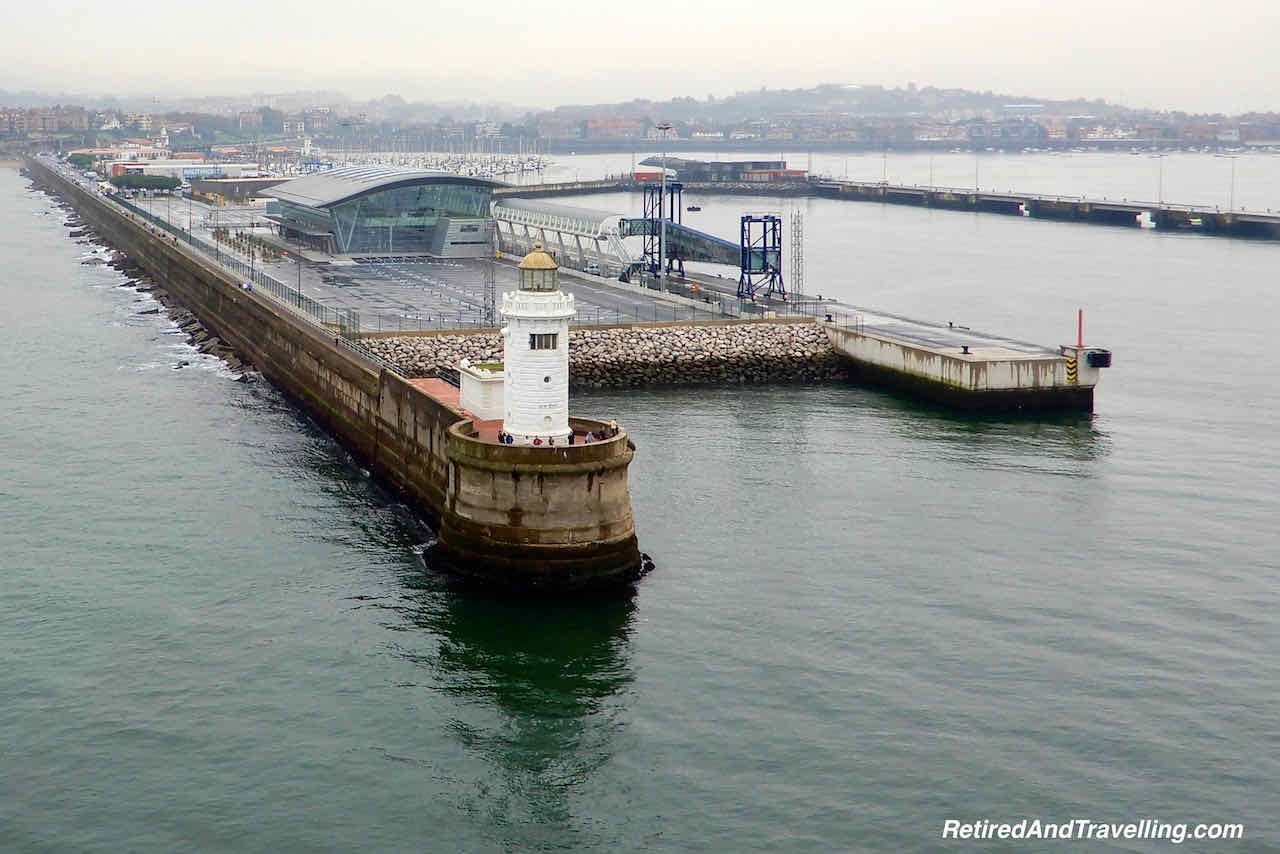 From the dock we saw the Bizkaia Bridge at the mouth into the Bilbao River. At a distance, it looked like a simple truss bridge over the river. But when we walked closer, we saw a gondola suspended under the bridge. It moved from one side of the river to the other. 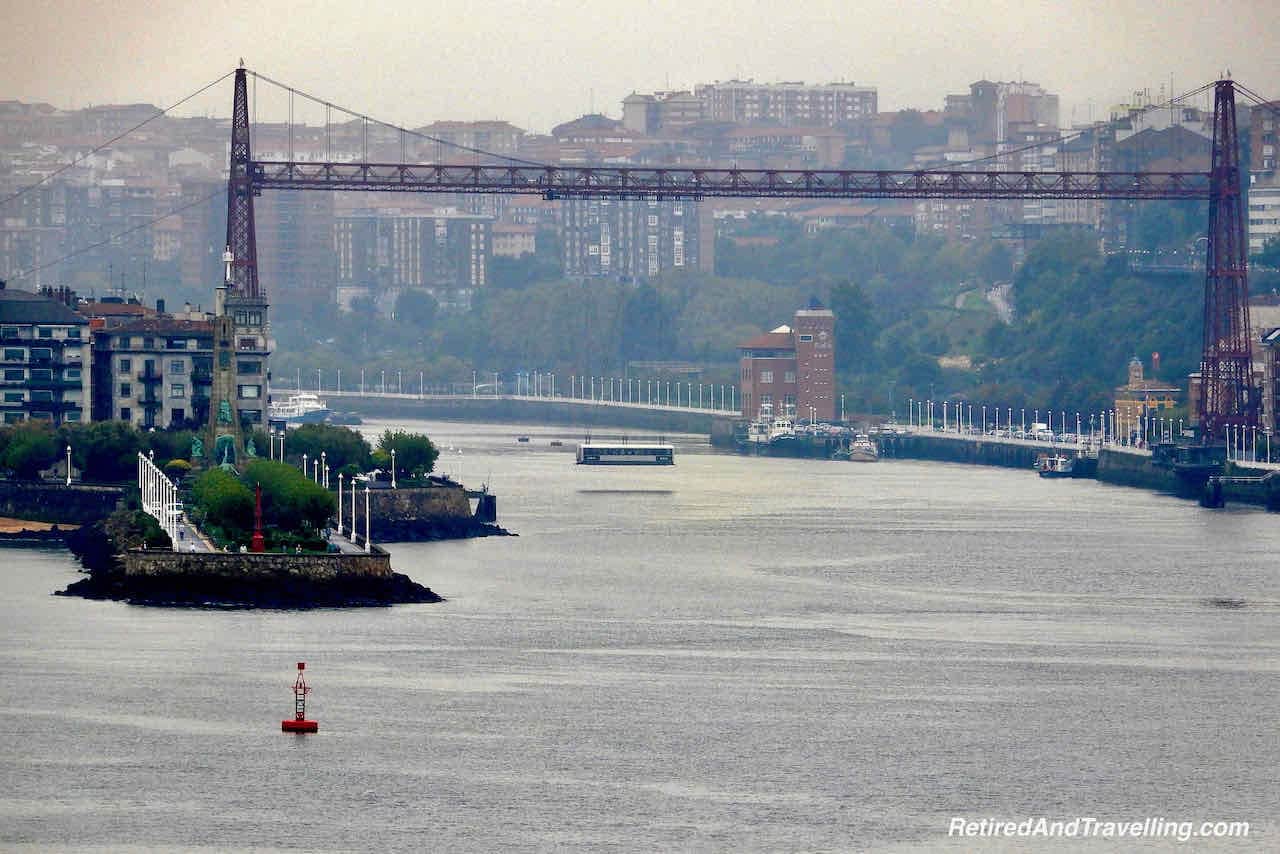 In 1893 the Bizkaia Bridge was opened and was the first transporter bridge in the world. The bridge suffered damage over the years and had several renovations. In 1999 a walkway was added to the top. An elevator went to the top and provided a great panoramic photo stop in Bilbao. With grey cloudy skies, we passed on a ride to the top.

In 2006, the Bizkaia Bridge was designated as a UNESCO World Heritage site.

A Walk Along the River In Bilbao

The rain stopped midway through the second day and we hopped on a shuttle for a quick photo stop in Bilbao. The shuttle bus ride into town was about 30 minutes.

We walked right to the river. There was so much to see as we walked along. The pedestrian bridge across the river provided great views of both sides. Far up in the hills we saw a colourful mural. 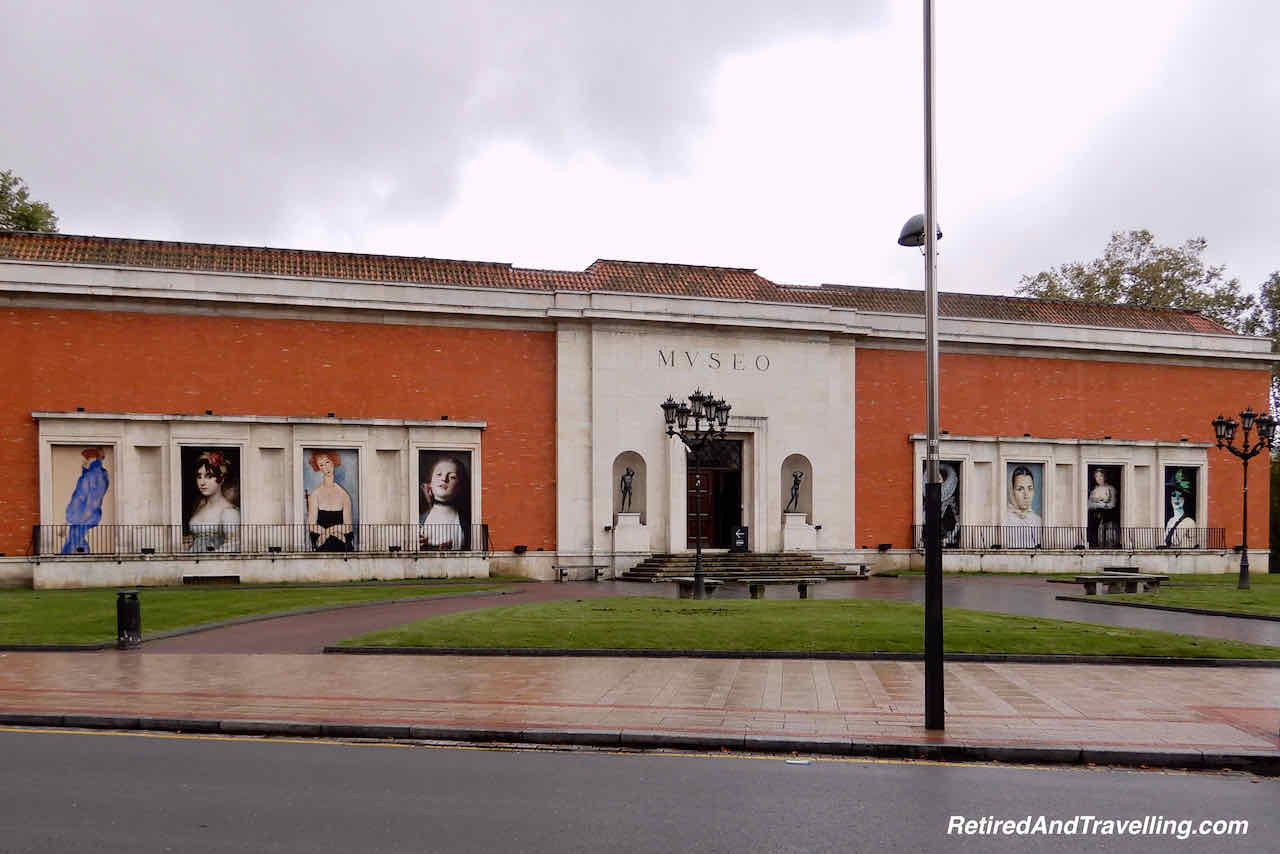 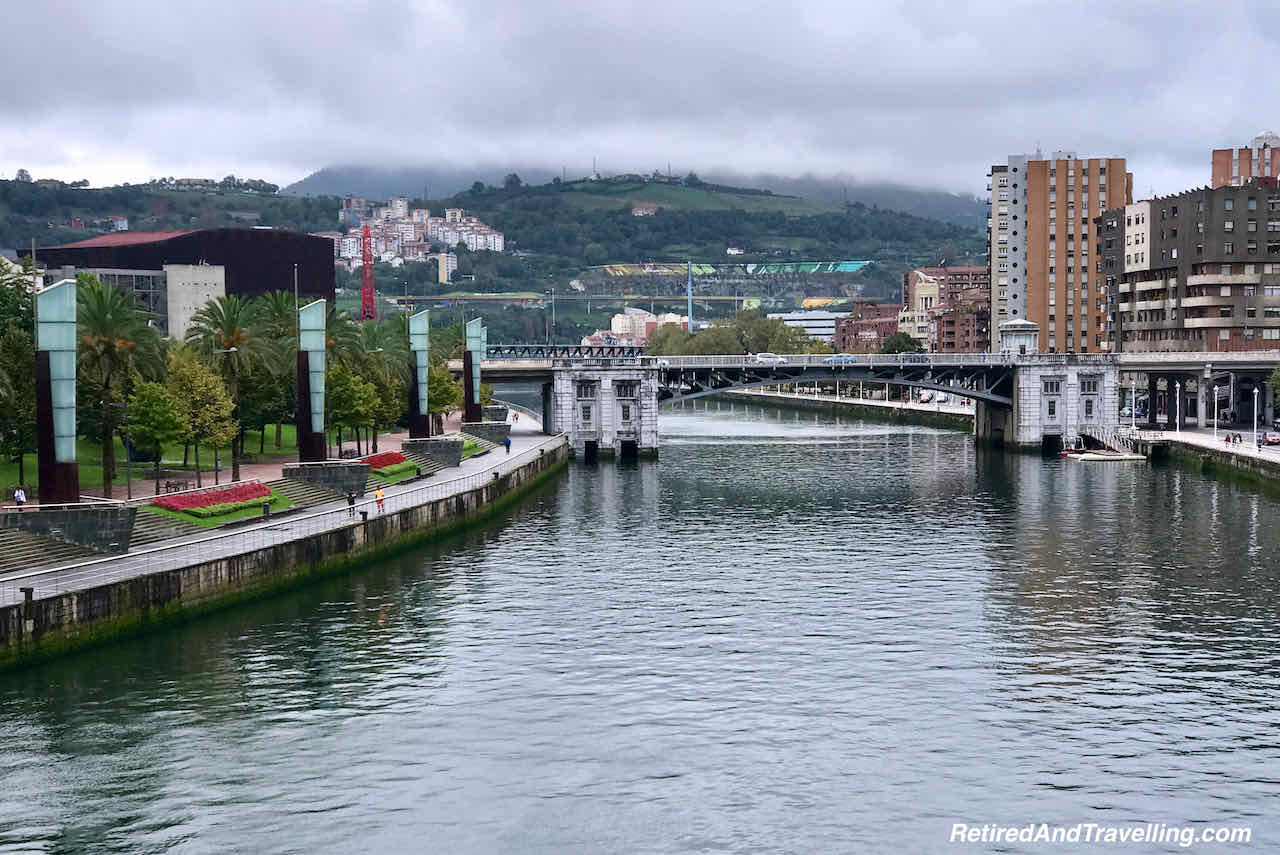 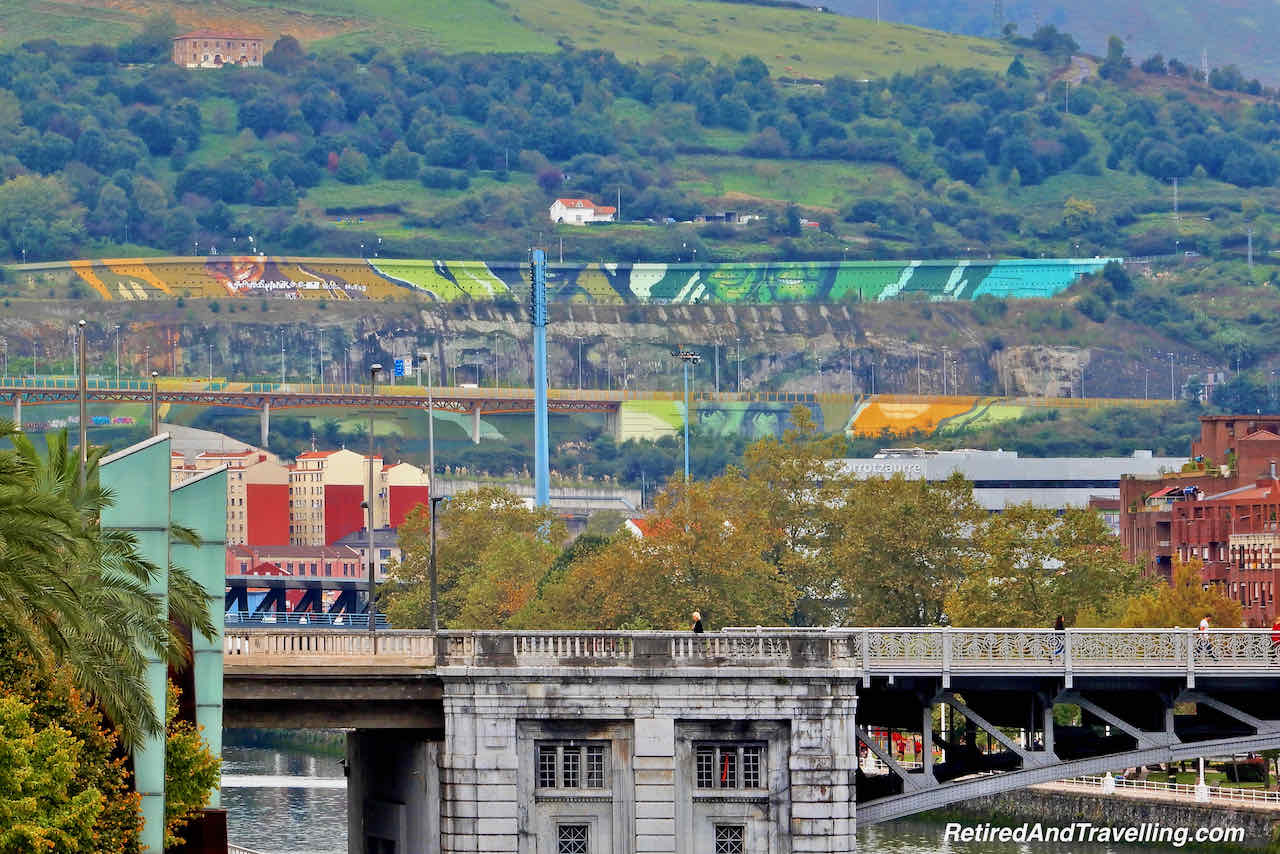 On the far bank we saw the large sprawling campus of the Deusto University. The trees in front were changing colour and provided a great highlight to the buildings. 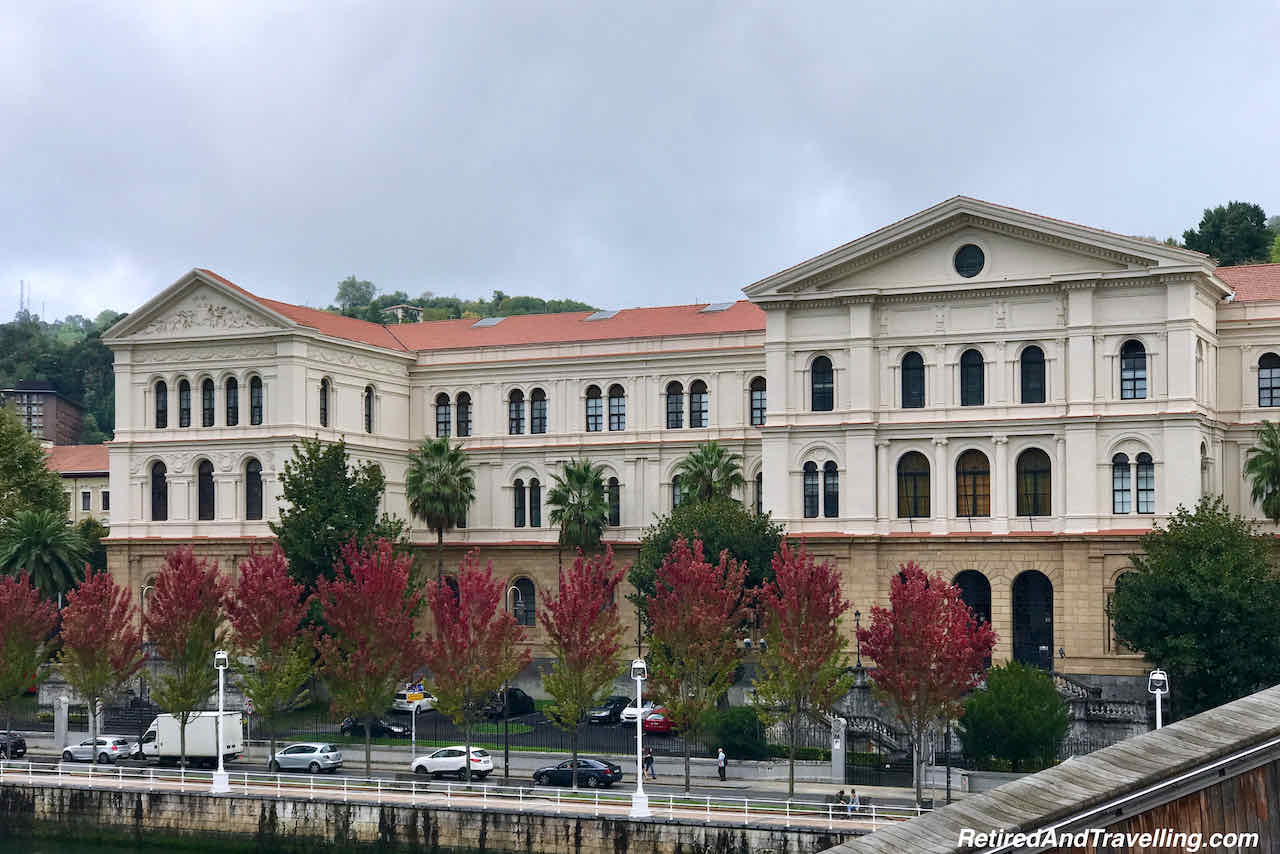 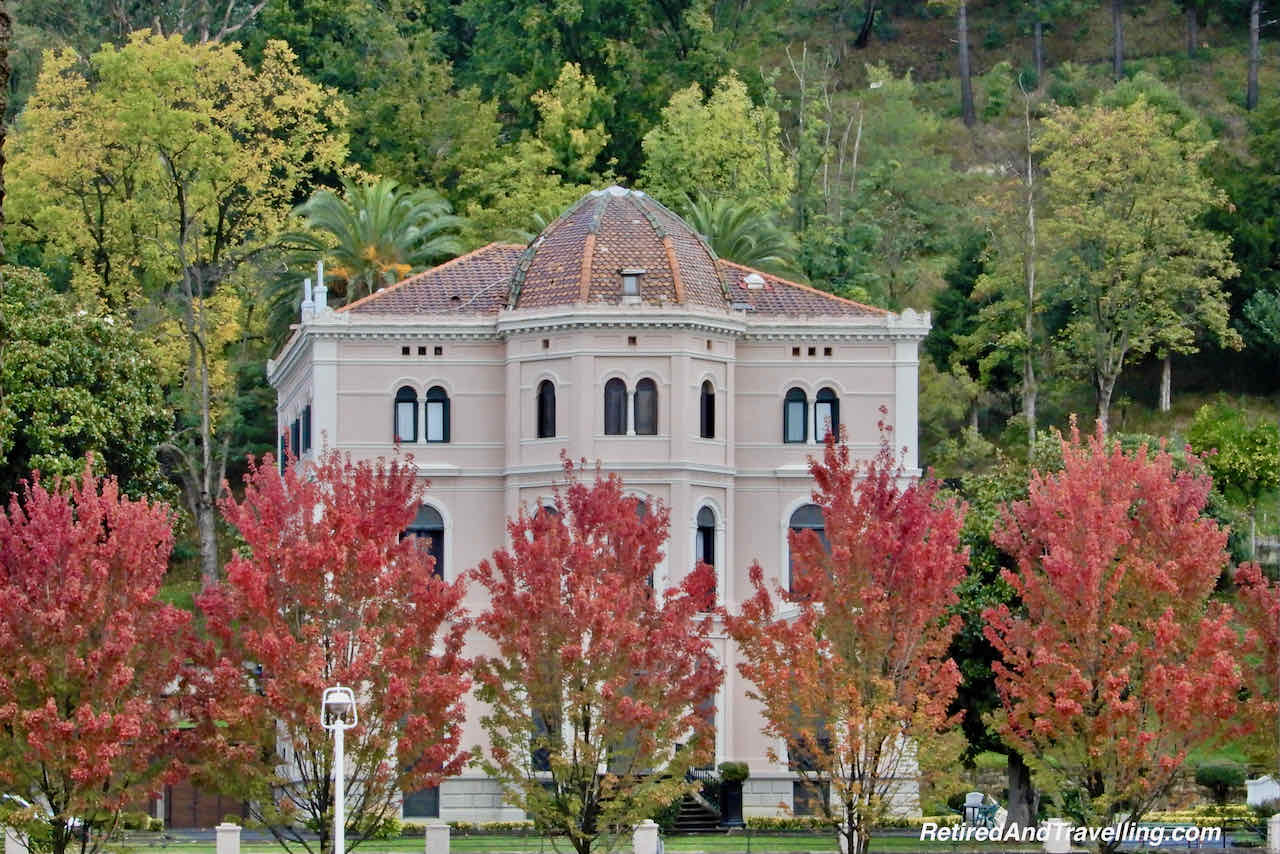 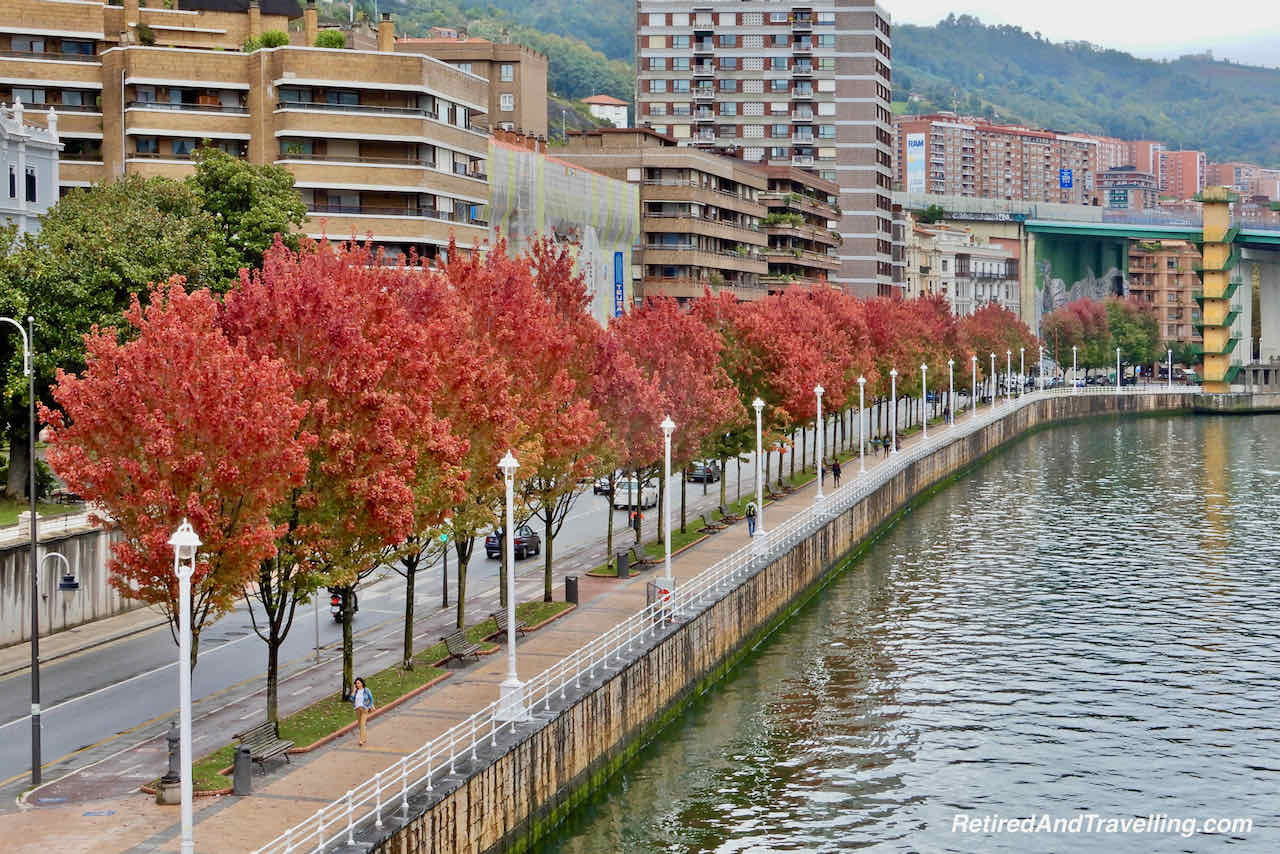 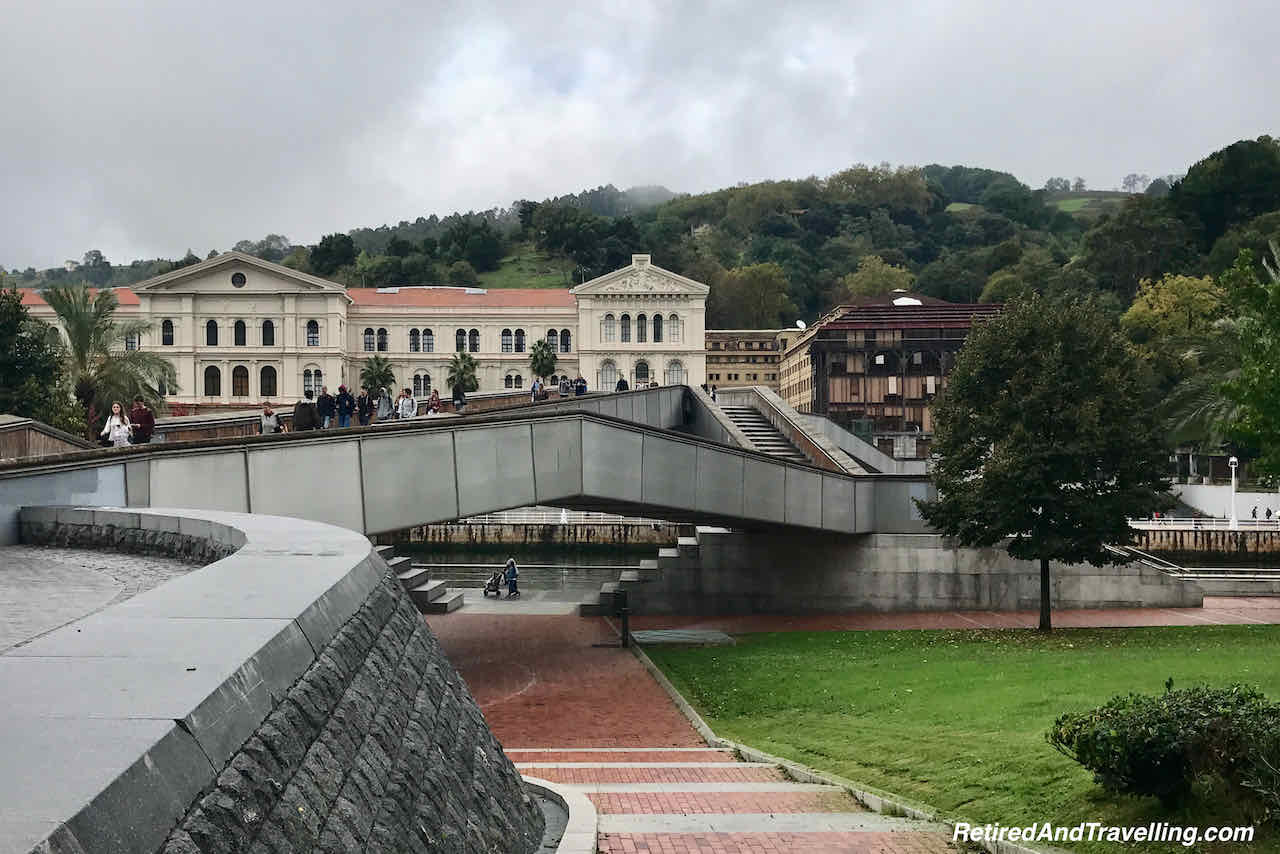 Our First View Of The Guggenheim Museum in Bilbao

The view in the other direction gave us our first sight of the Guggenheim Museum in Bilbao. The La Salve Zubia Bridge with the great red gate by the French artist Daniel Buren stood beside the museum. We saw the boardwalk and green space beside the museum as we approached. 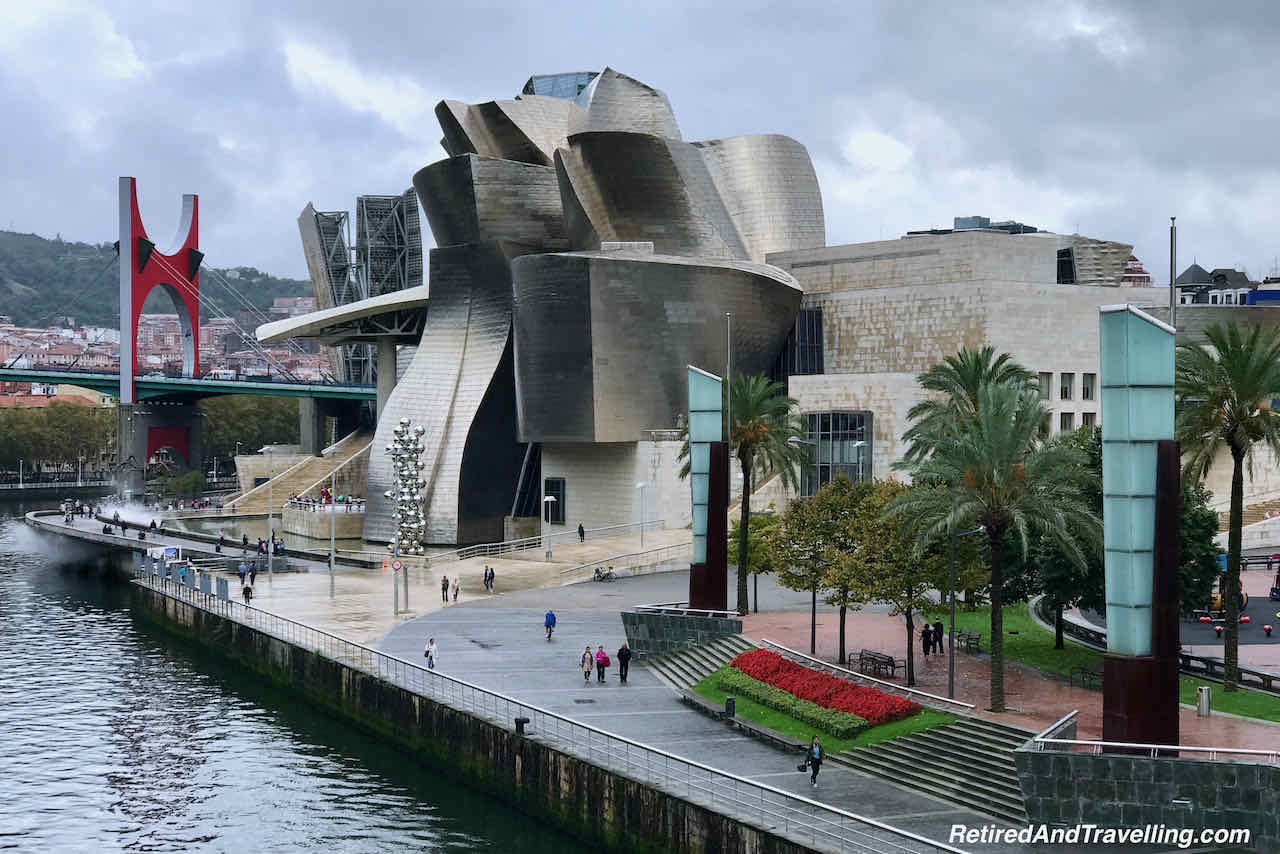 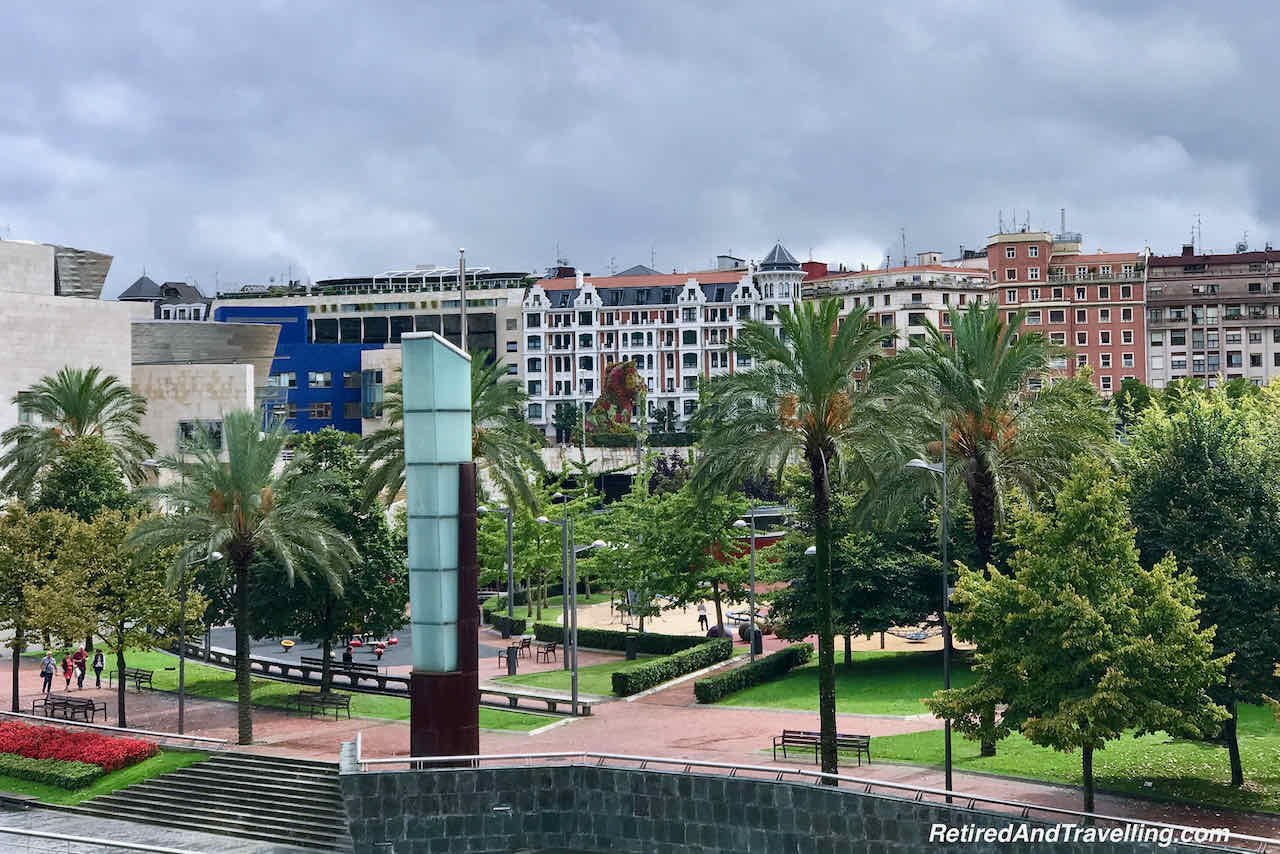 When we looked closer, we saw an interesting mural on the opposite bank under the La Salve Zubia Bridge. 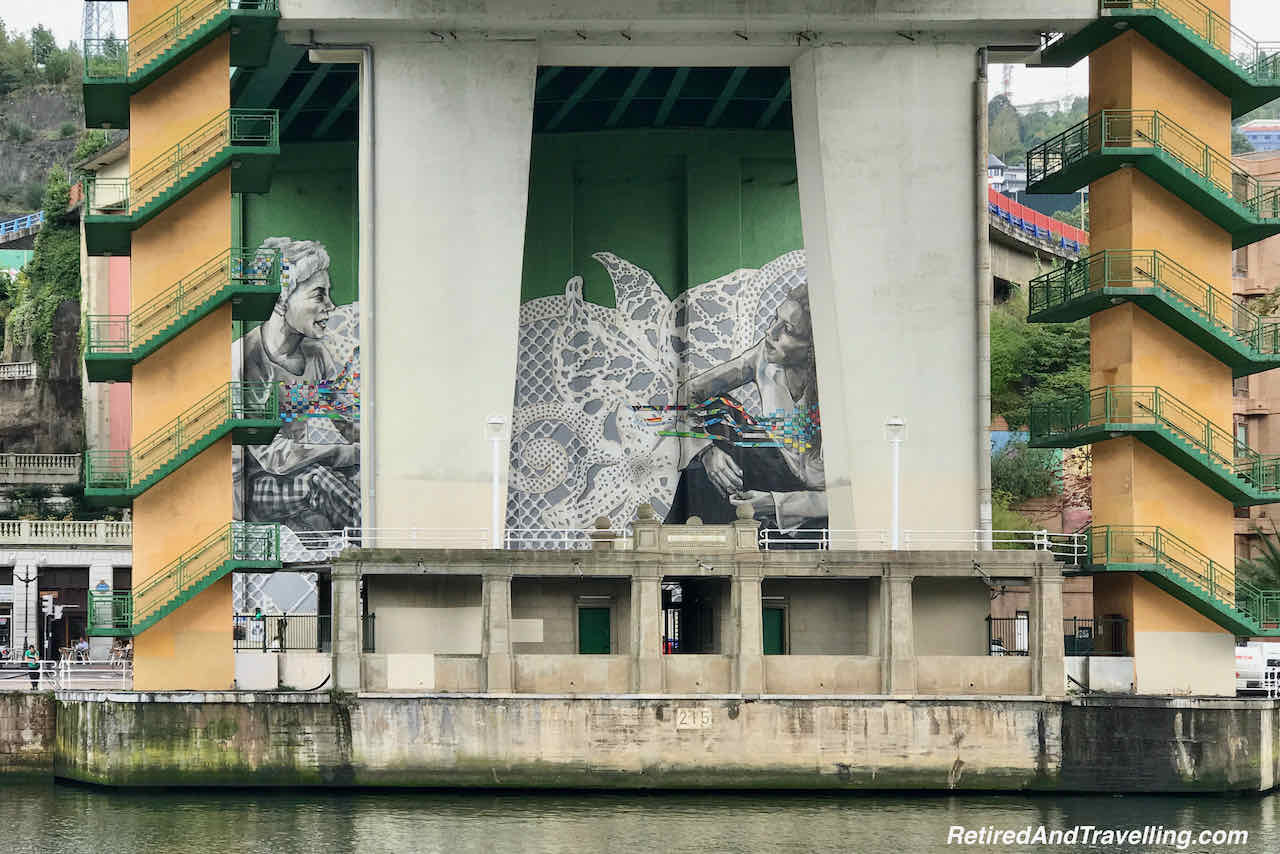 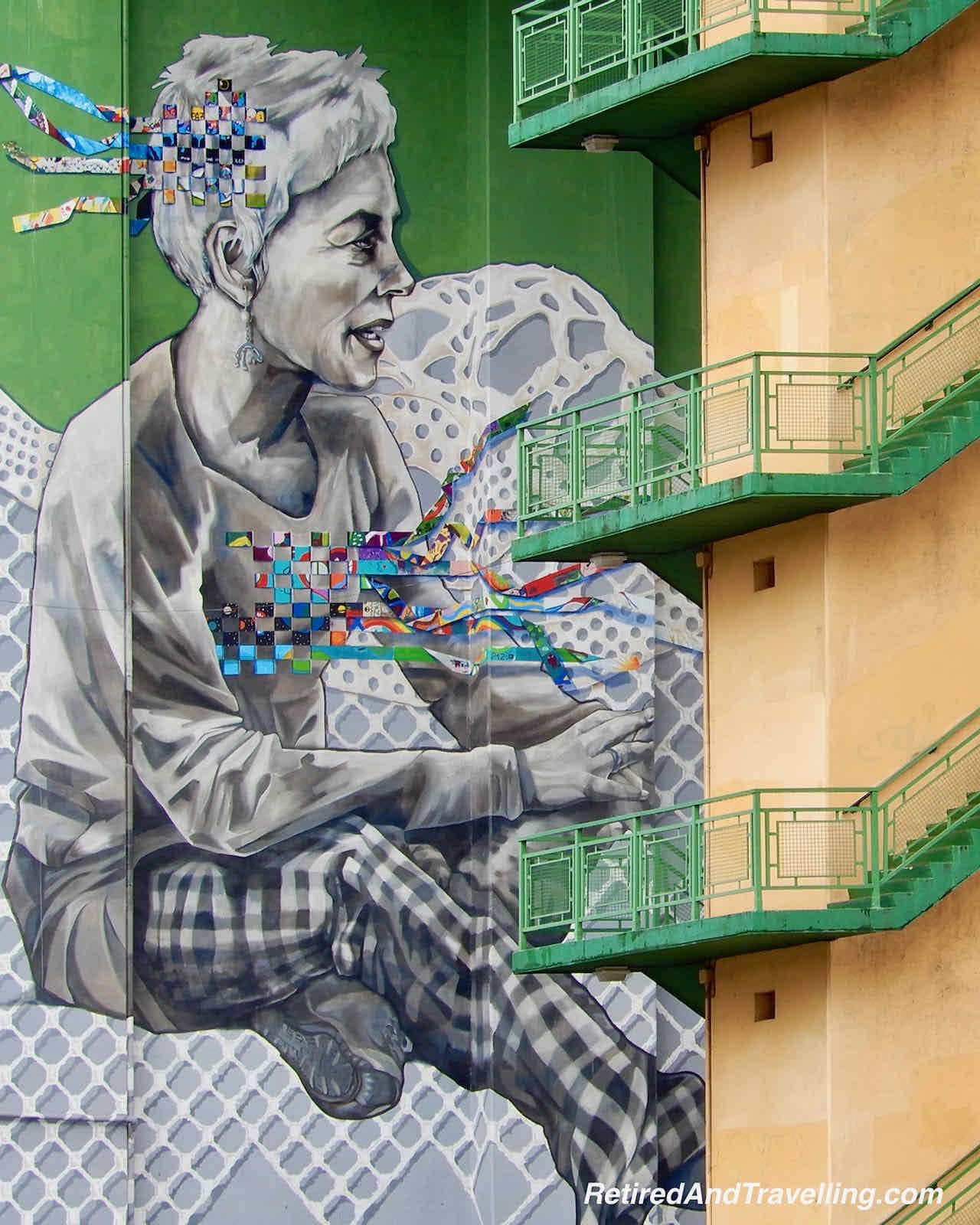 This was a great spot to start our photo stop in Bilbao!

Guggenheim Up Close On Our Photo Stop In Bilbao Spain

The next point on our photo stop in Bilbao was a close up look at the Guggenheim. The building itself was a work of art. As we walked closer, different facets of the building came into focus. As the sun played in and out of the clouds, the building also changed. 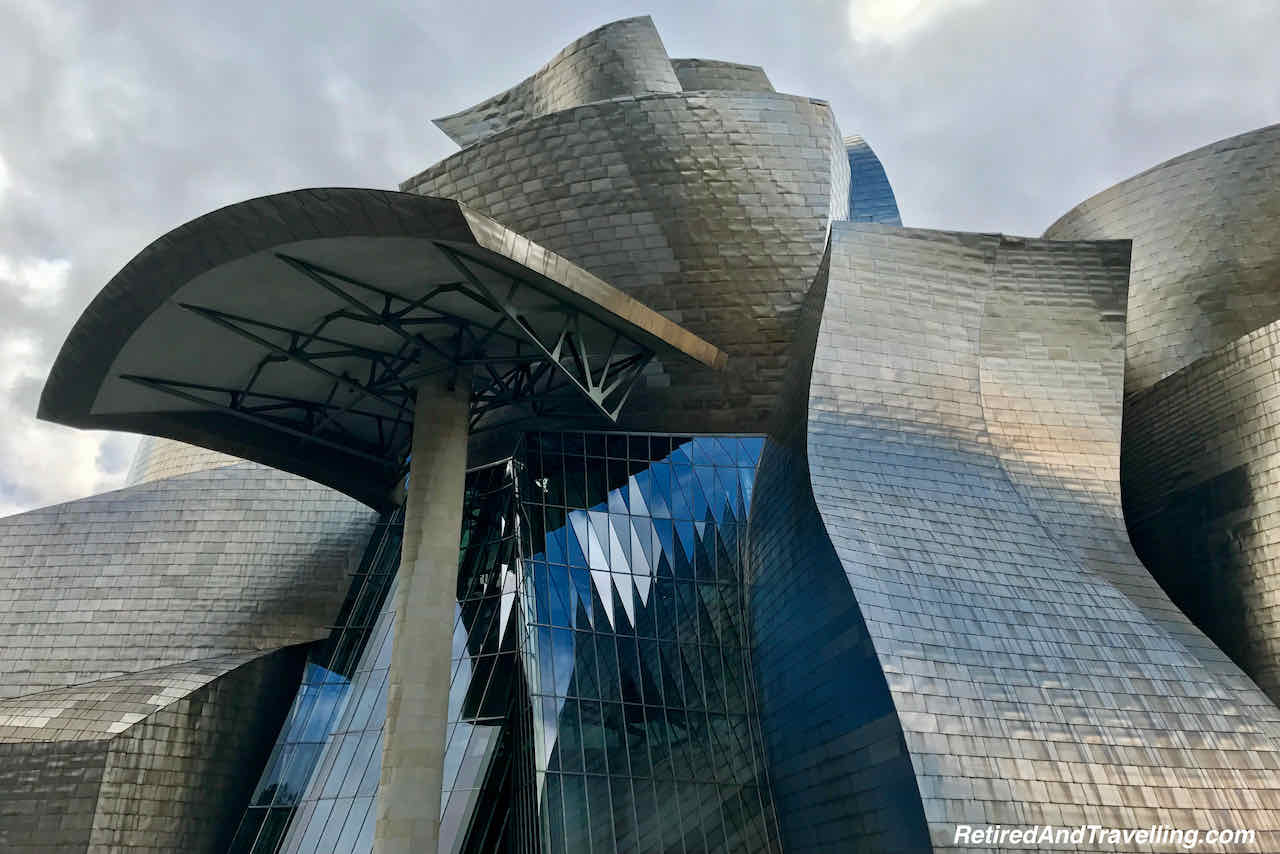 The large pillar of shiny balls provided a reflective surface in the water around the museum. This was the Tall Tree & The Eye statue by Anish Kapoor. The statue included 73 reflective spheres on three axes. The reflective surface reminded me of the The Bean (Cloud Gate) we saw when we visited Chicago. 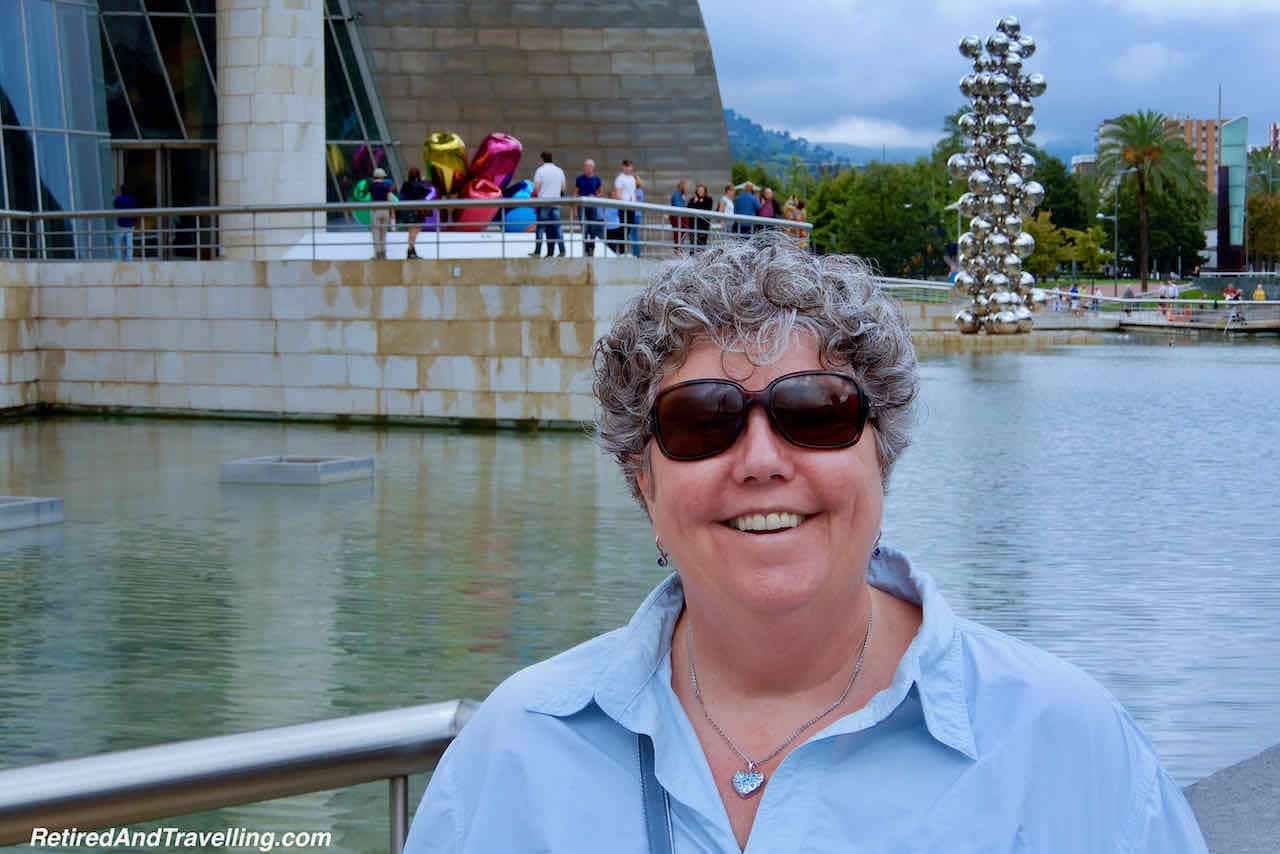 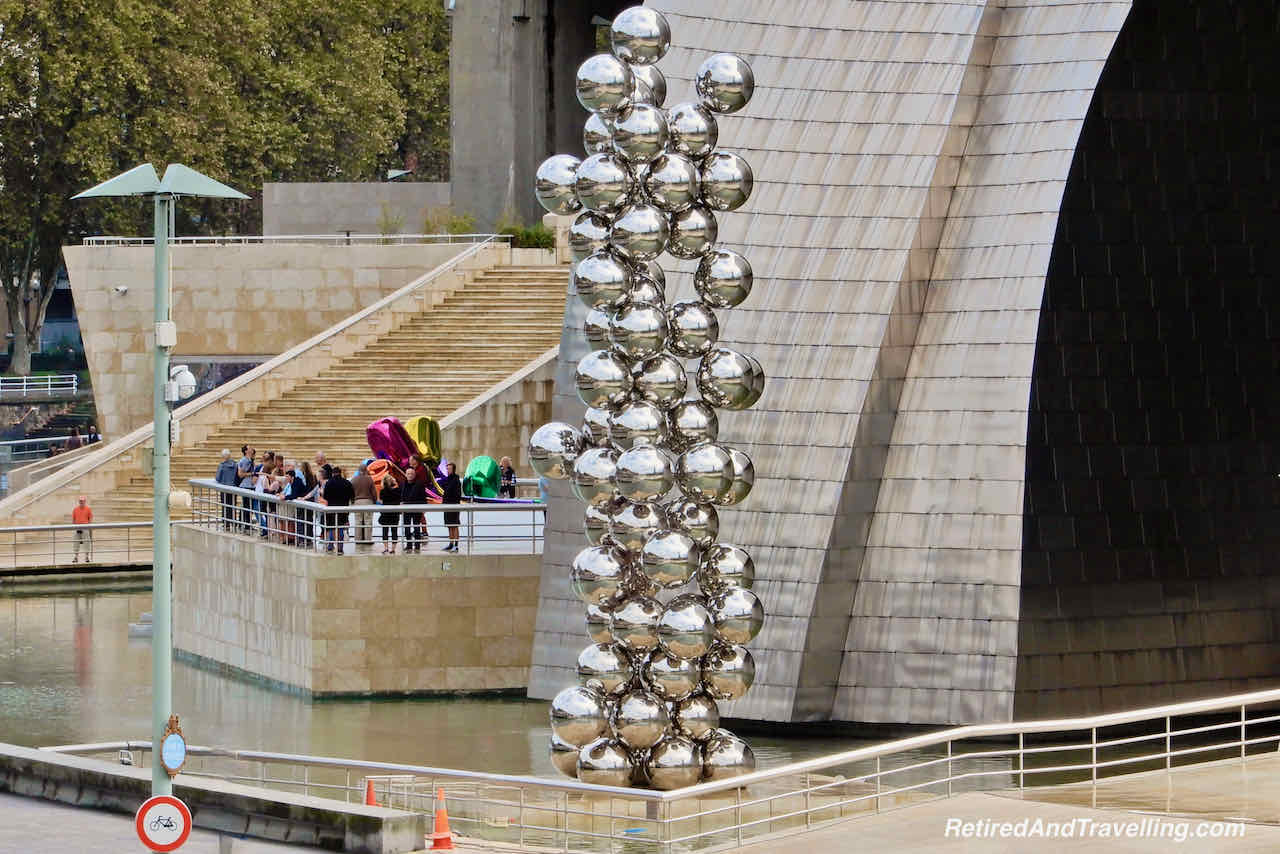 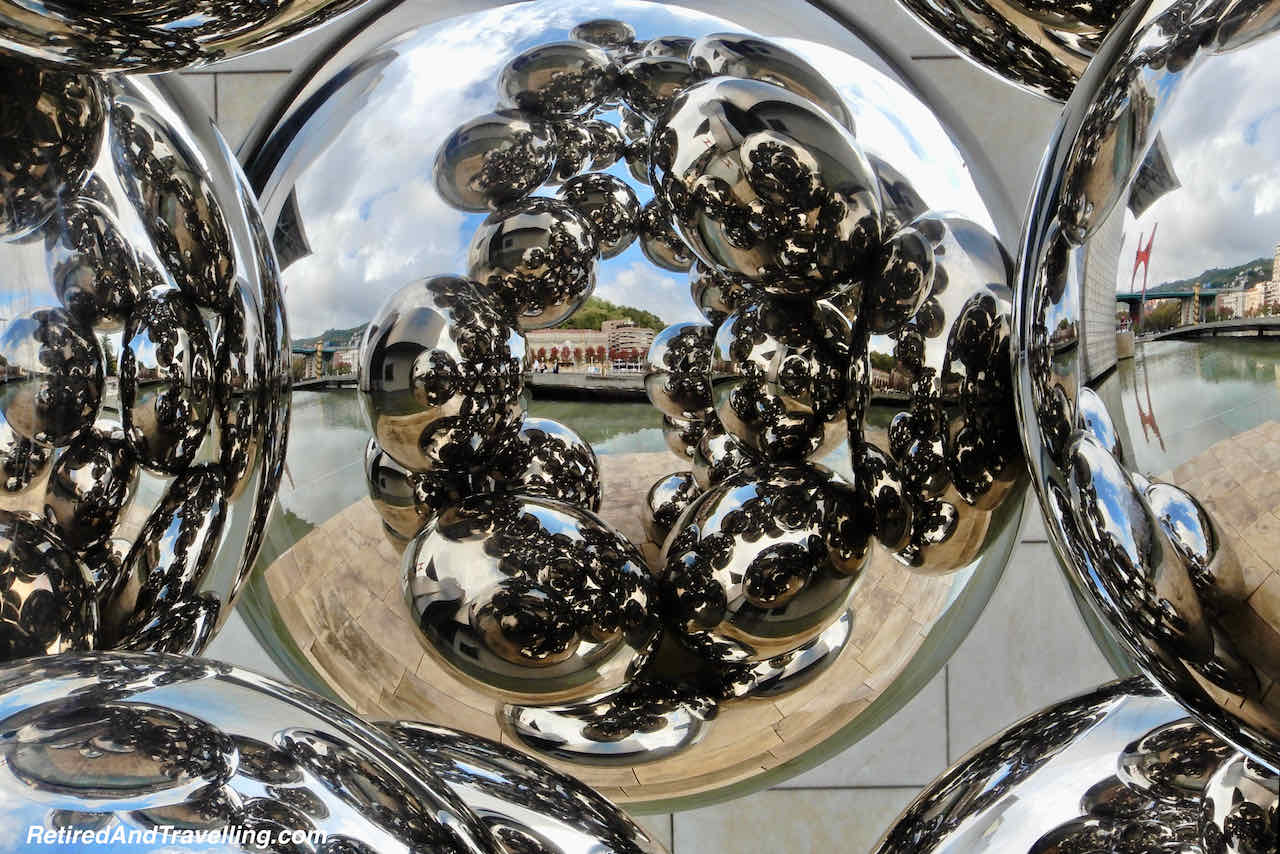 The patio of the museum contained a large colourful display. The Tulips exhibit by Jeff Koons was part of his Celebration collection. It stood more than 2 meters tall and 5 meters across. 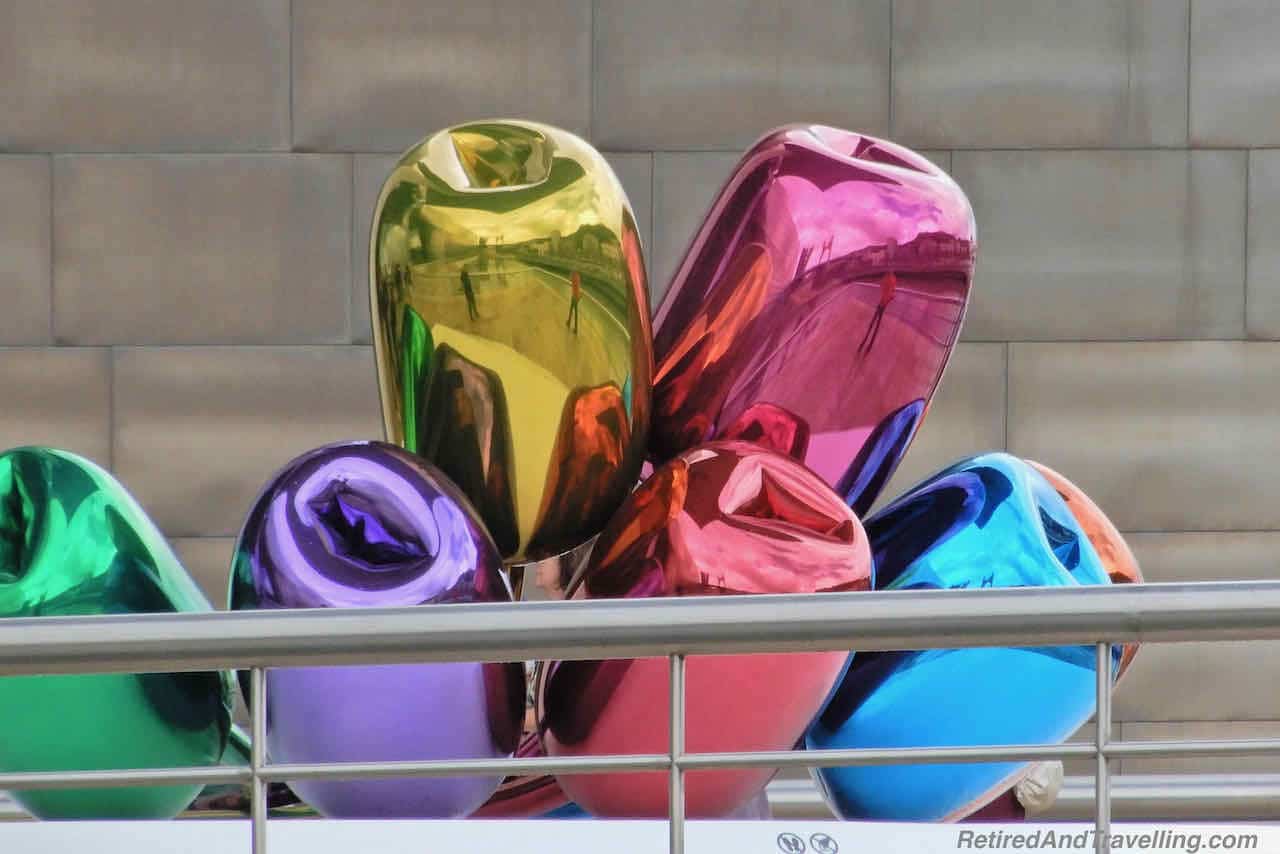 More Colourful Art At The Guggenheim

At the far end under the bridge we saw a big Maman spider statue by Louise Bourgeoise. This was very familiar to us. We saw a similar statue when we visited Ottawa in Canada and also when we visited the outdoor statue garden in New Orleans. 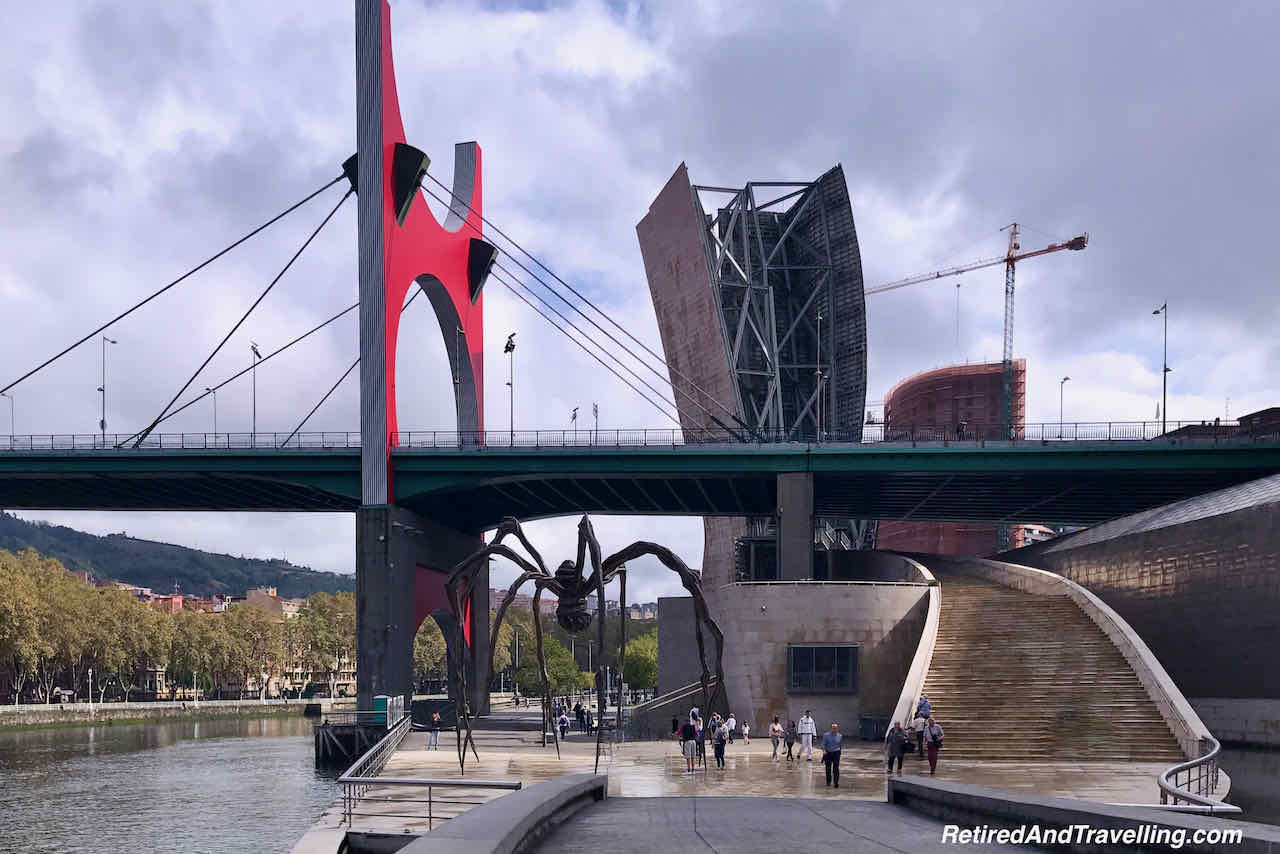 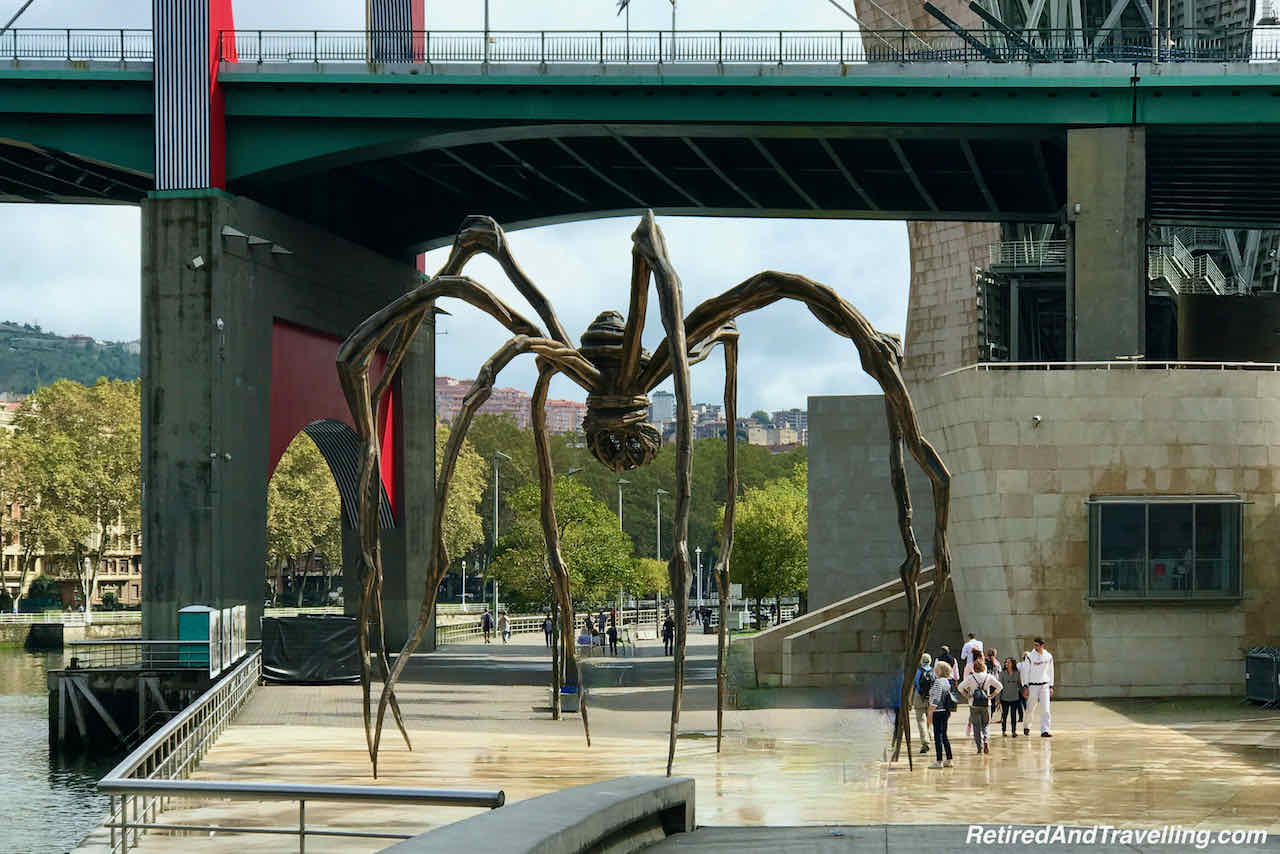 The view of the main entrance of the Guggenheim Museum was much less artistic. Although we found an interesting dog statue called Puppy by Jeff Koons. The statue was covered with colourful autumn flowers. We figured this meant the look of the statue changed throughout the year. 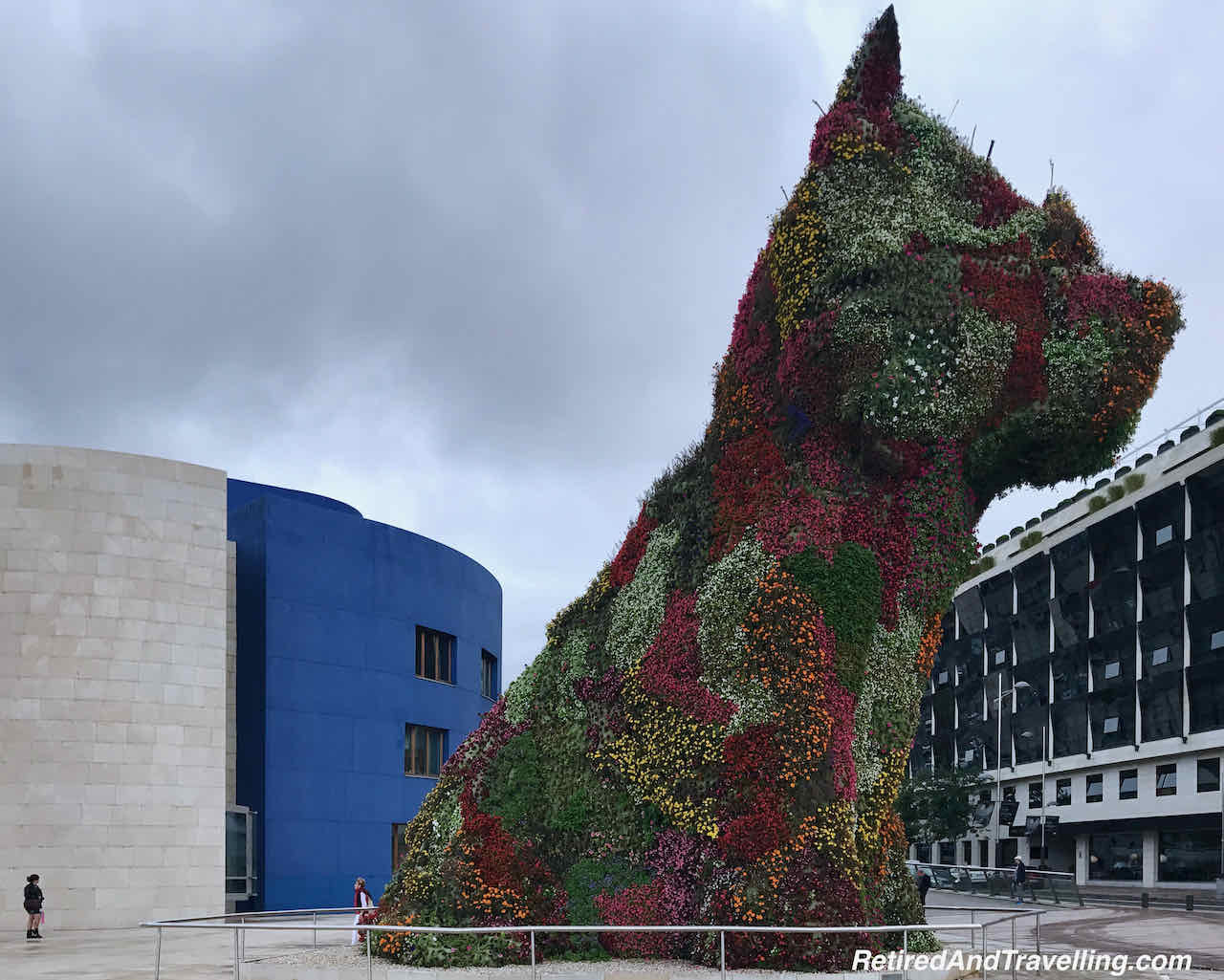 We ran out of time and weather so we did not visit inside the Guggenheim on this trip.

Just A Photo Stop In Bilbao

When we visited Spain in June, we planned to visit Bilbao and San Sebastian. That trip was cut short before we hit the north coast of Spain.

This second trip to Bilbao did not give us the view of the north coast of Spain that we wanted. We really had just a short photo stop in Bilbao. But even on a short stop, we found so many interesting pieces of art at the Guggenheim and thought the city. There was certainly much left for a return visit.

The next stop as we cruised along the coast of Western Europe was in Ferrol, Spain. From there we took a tour of the Galicia region of Spain. It was just another taste test and left us wanting more.

Did you do a photo stop in Bilbao? Did you find the Guggenheim to be a work of art? 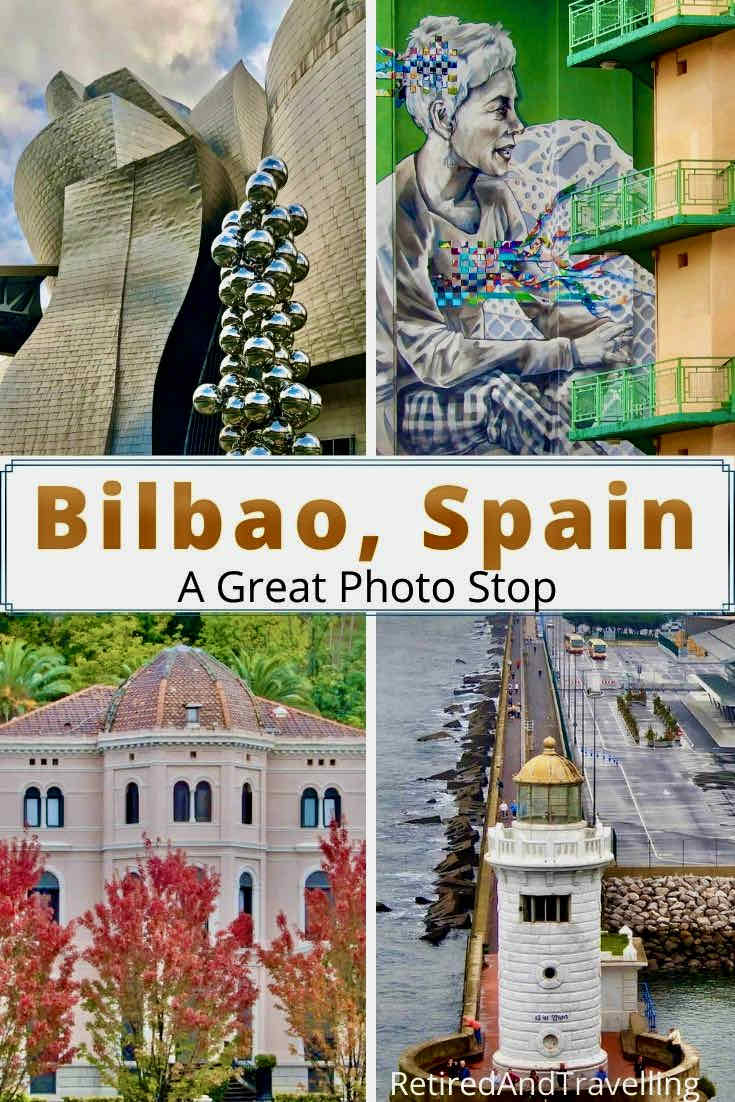 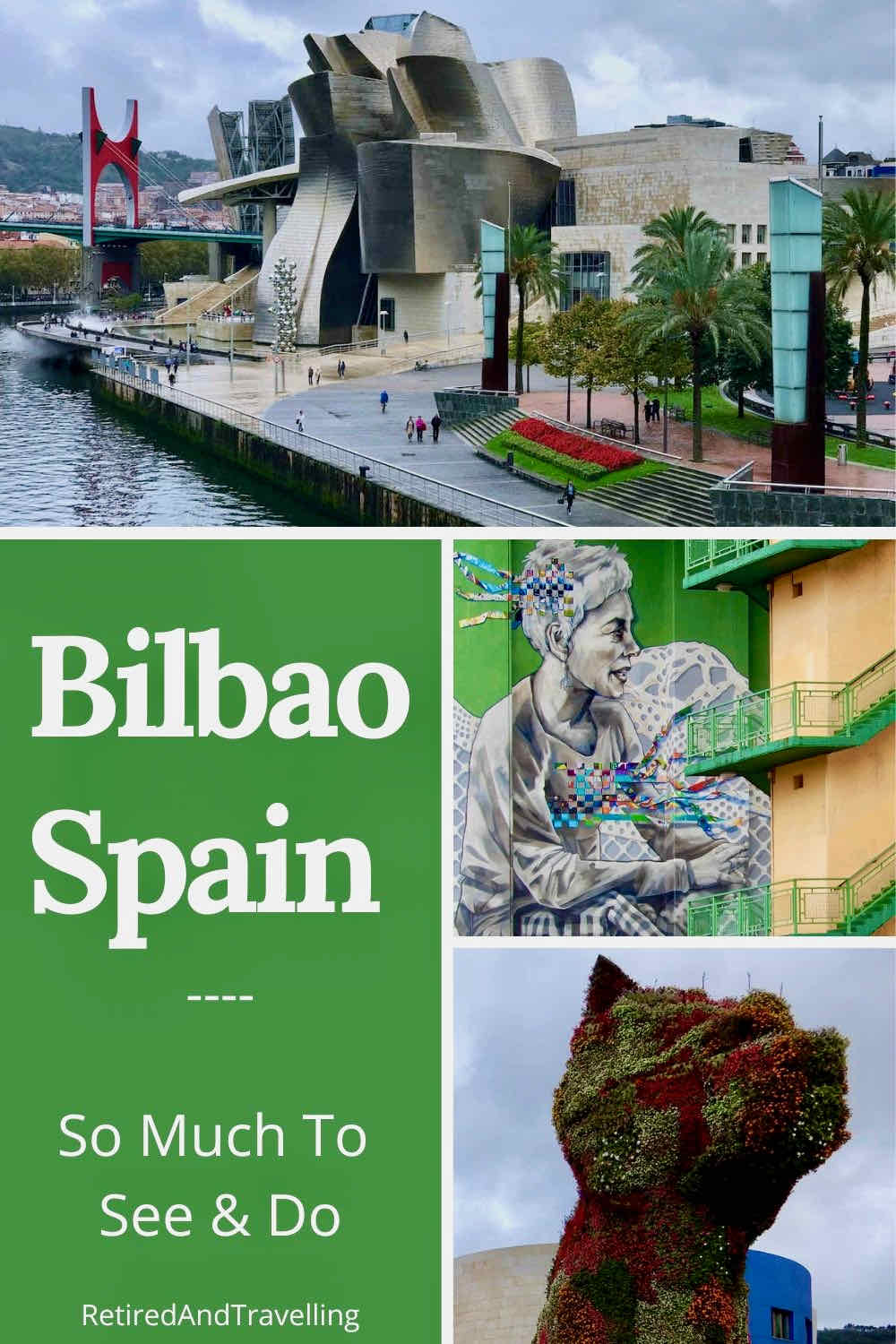 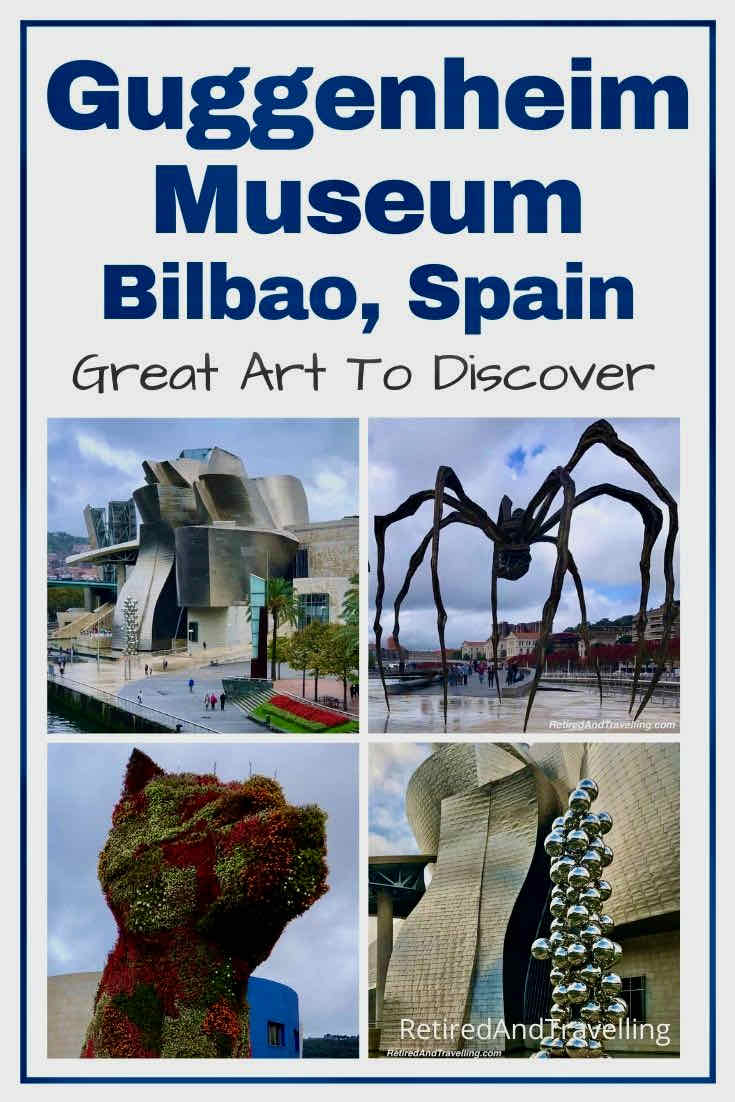 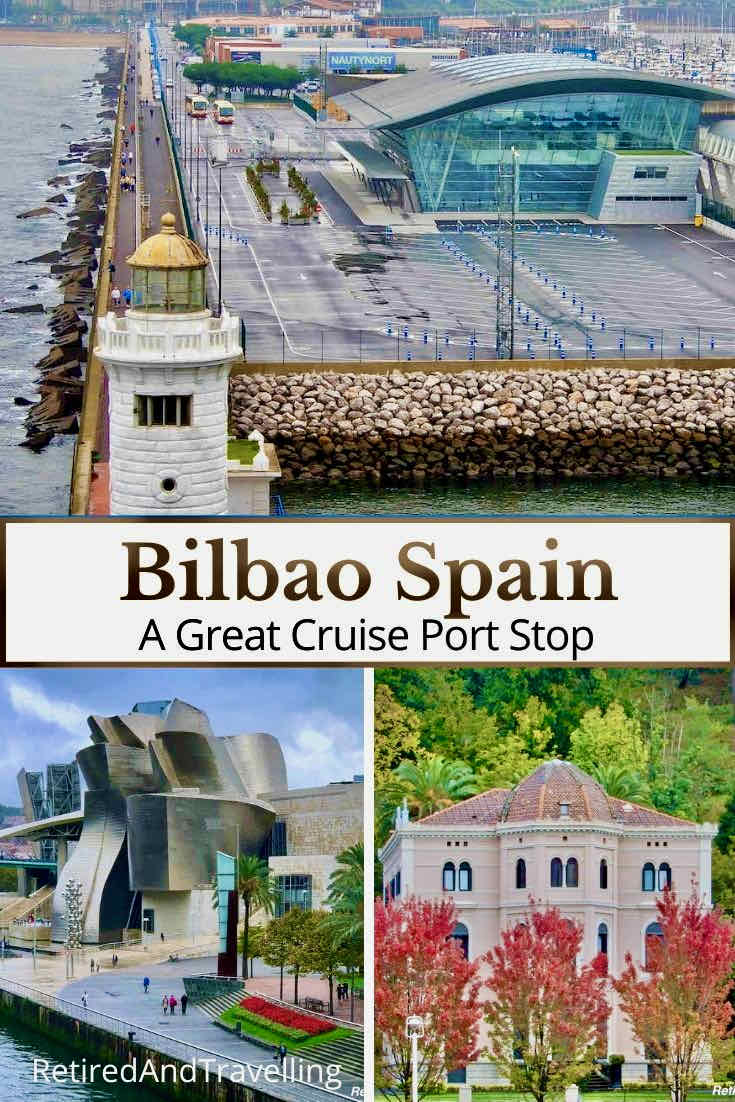 7 Things To Do On A Day In Belfast, Northern Ireland

We would love if you could share this!
84
84
Shares

The Hills and Valleys of Madeira

Our First Stop In Portugal We had really loved our visit to the Canary Islands. This stop in Funchal, Madeira would be yet another volcanic island in the long chain that sits in the North […]

A Miniature View of Portugal in Coimbra

A Miniature View of Portugal in Coimbra We visited Coimbra for a few days on our drive from staying in the Douro River Valley back to Lisbon. One of the Coimbra points of interest recommended […]