We travelled through the Egyptian desert when we explored the Egyptian temples and tombs. The port in Sharm El Sheikh would be our first opportunity for scuba diving the Red Sea. This had been on my “list” for a long time. We were not going to miss this chance. Unfortunately, we didn’t get into port until noon, so scuba options were limited.

David checked out companies in advance. When we arrived in port we saw lines of idle scuba boats. With tourist volumes so low, it was hard to find a scuba company interested in taking just two divers for a short port day. 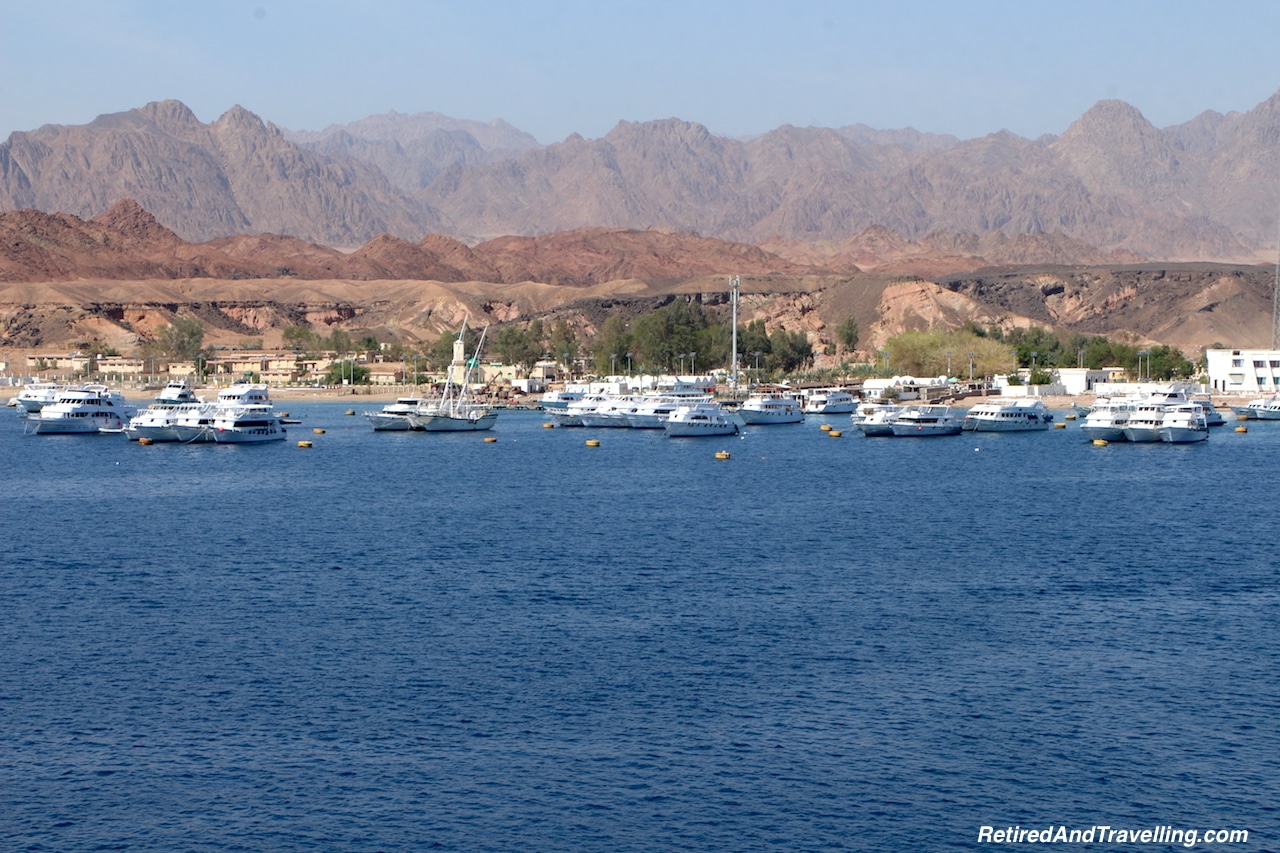 While cruising, we emailed to book scuba diving the Red Sea with the Red Sea Diving Collage. They said we could only get one shore dive in the afternoon. If we stuck around after sunset, we could then get a night dive. When we arrived, we understood why 4 hours to sunset really only gave us time for one afternoon dive. It took us over 3 hours from start to finish for one dive. We did not make a decision on a night dive until we saw how the first dive went.

The cruise ship was cleared on time. Exiting with our passports in hand, we went through customs clearance. This would be the first port where we had to carry our passports and show the Egypt entry stamp.

The day tour and town shuttle buses came right up to the ship to pick up passengers. Those wandering on their own walked the long, hot empty parking lot to the security gate. Security was thorough. I was given a pat down, our bags were x-rayed and dogs wandered the terminal. We found a shady spot beside the armed sentry to wait for the driver from the dive shop.

It was a short drive through Sharm El Sheikh to Naama Bay. Other than water sports and one large mosque, it did not look like there was much to do in this port. 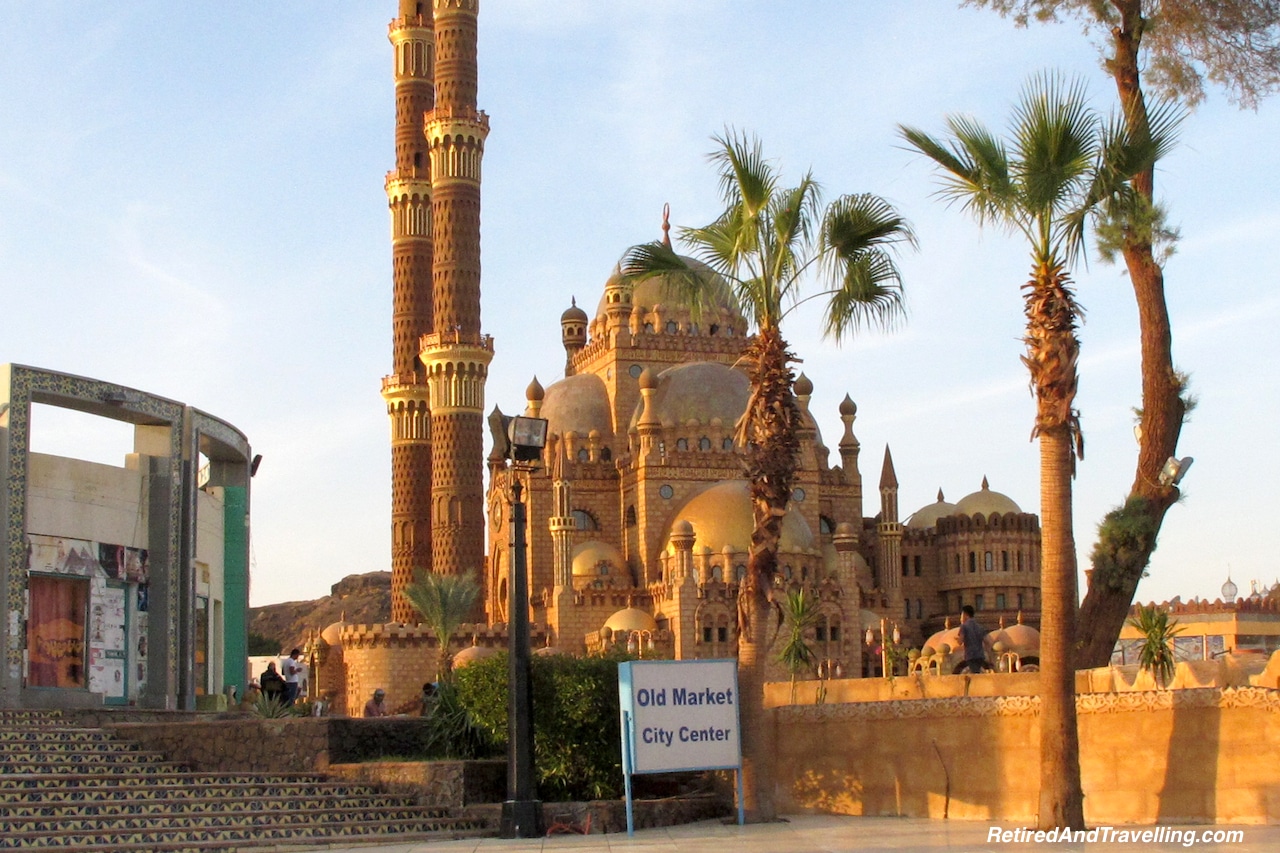 Entering the beach area it was immediately evident how depressed the tourism industry was. Only about 1 in 10 shops were even open. It looked like a ghost town. We were the only scuba divers. This meant we got a personal underwater tour but would also get the easiest dive they could manage. This would not be the best example of scuba diving the Red Sea!

Once our paperwork was checked, we got our gear. We had scuba dived on the Great Barrier Reef and then in St Lucia in the summer. So scuba diving currency was not an issue.

I had brought my wetsuit and we had masks with snorkels but the rest we needed to rent. This would not be a full service dive! We got fully geared up at the shop. Waddling with our tanks on, we crossed the street, walked through the cafe, went through the heavily occupied beach dodging sunbathers and finally hit the water. Once we were about hip level, I floated some of the weight off my back. I was ready to start scuba diving the Red Sea. 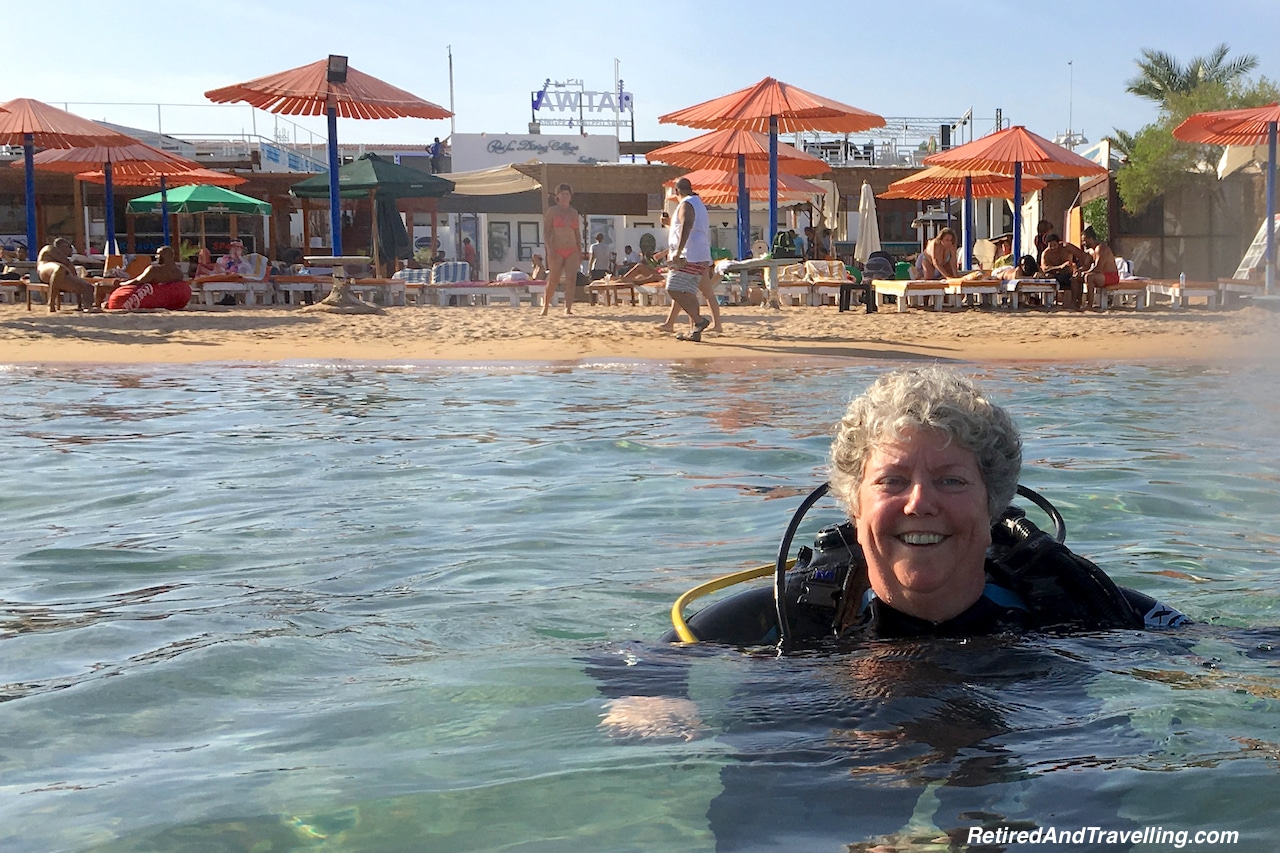 Our dive leader noted that the water was saltier than other areas. Both of us had new gear and this extra salt meant we were very light. The extra 2 kilos the guide had didn’t really help. I knew I was in trouble early. David handed me the iPhone with a floaty strap. Even that little bit of extra buoyancy caused me to shoot to the surface. Luckily we were still in 10′ of water.

Both of us fought with being too light for the entire dive. I normally have perfect buoyancy and can move up and down with simple breaths. By the end of the dive I kept my breath expelled as long as possible to keep down in the water. Not a way to enjoy scuba diving in the Red Sea!

Scuba diving the Red Sea would not take us far on this first experience. We swam through the house reef within the buoys. It was a healthy reef. We could have stayed for some time to take pics but our guide moved us on. 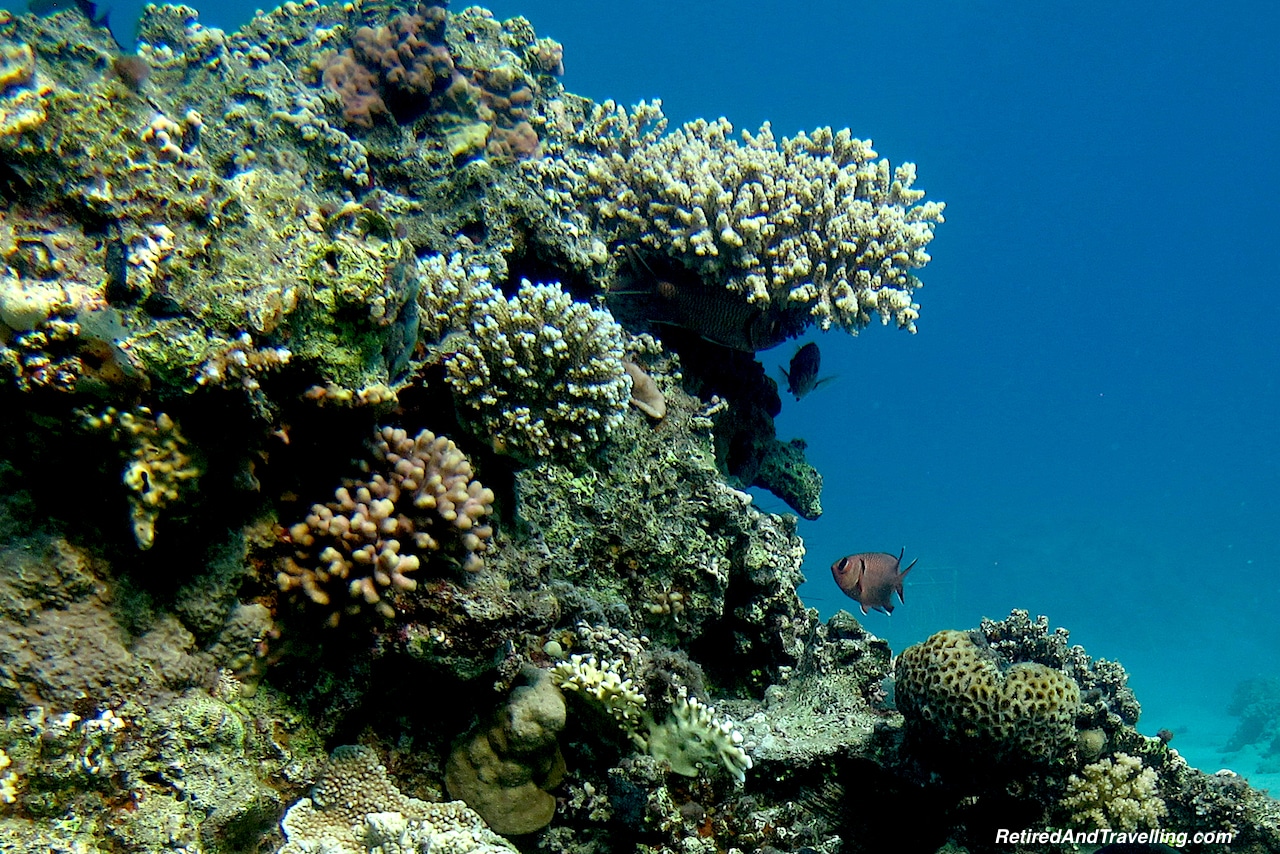 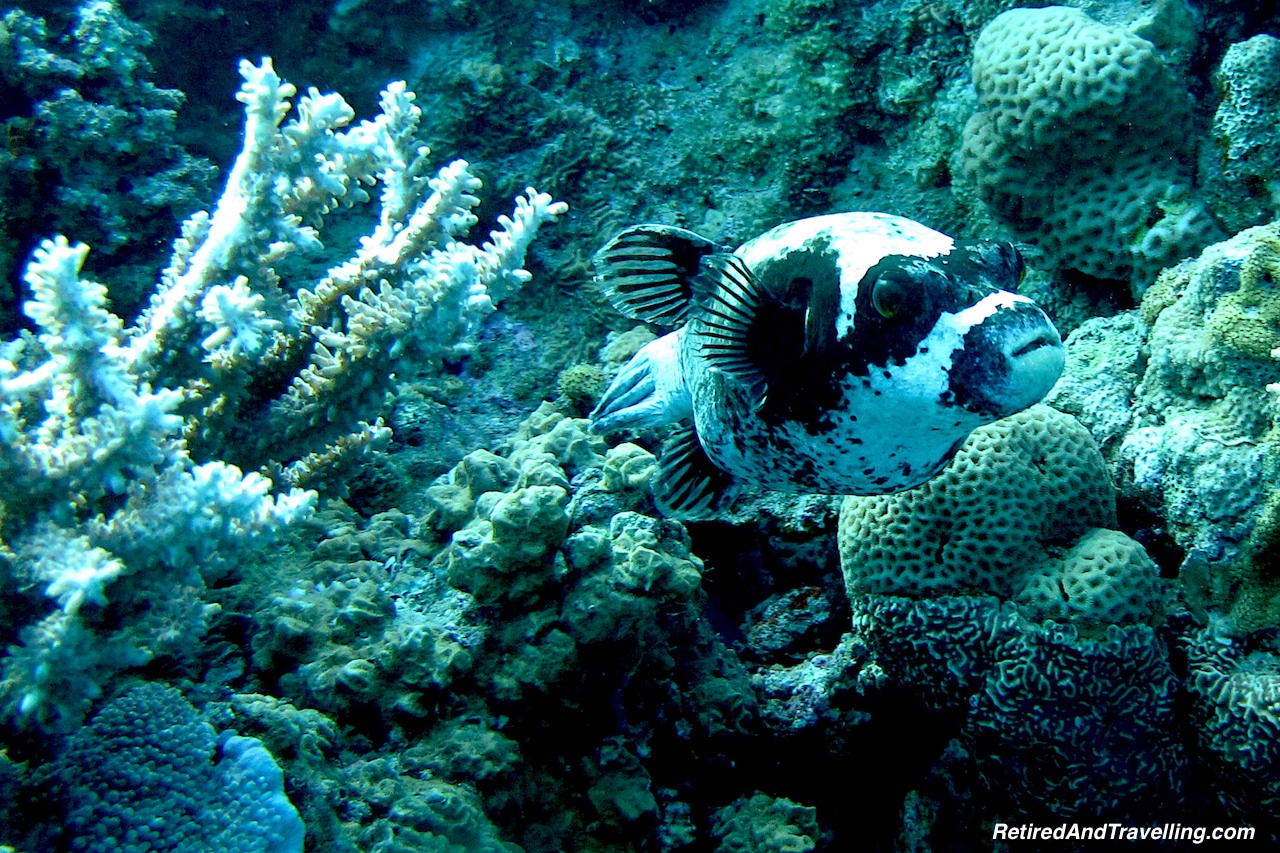 The next brief stops were at two artificial reefs growing on a few wire frame statues. There were colourful fish flowing around the pyramid and dolphin statues. 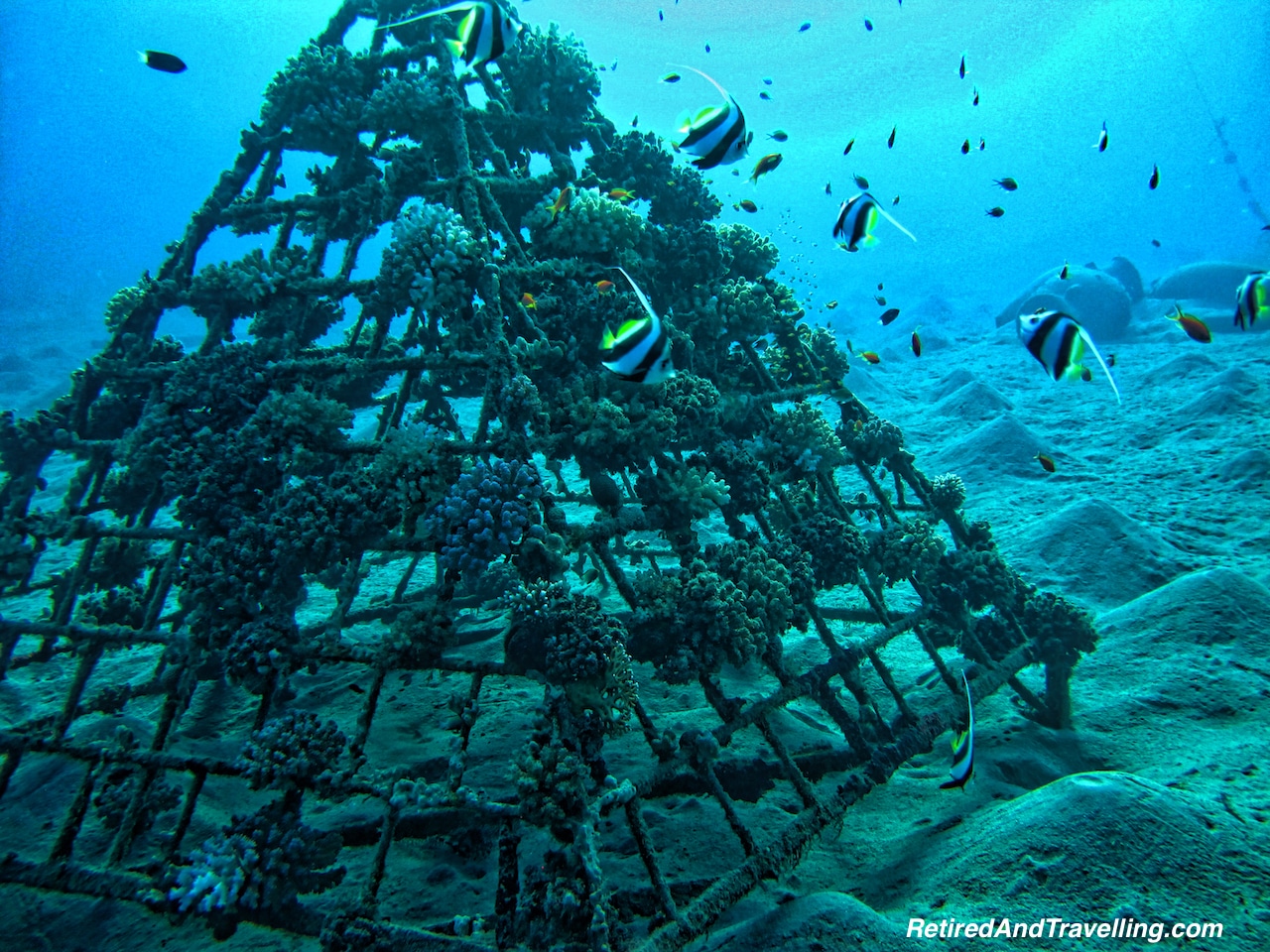 When we looked up, we could see the glass bottom boats above us. I am sure we were in a picture or two taken from above. 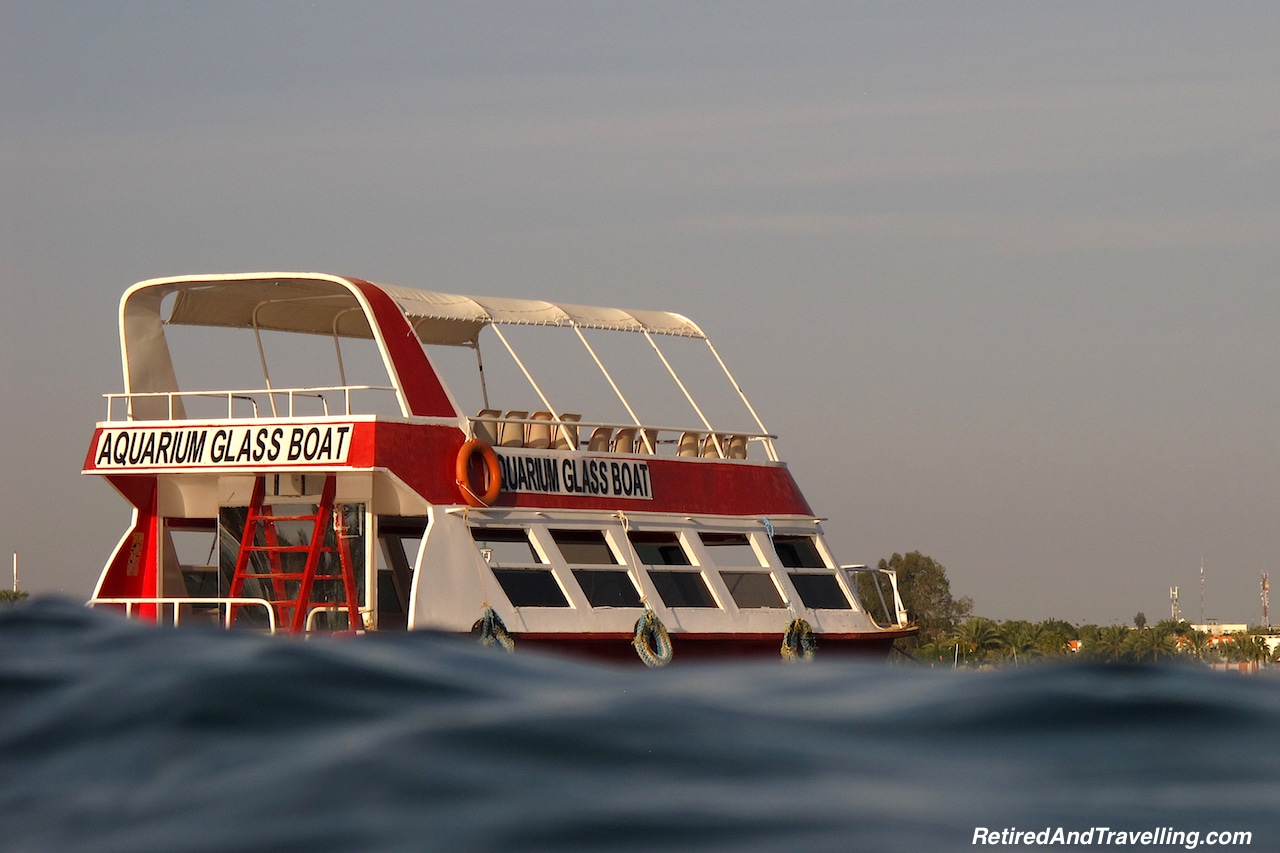 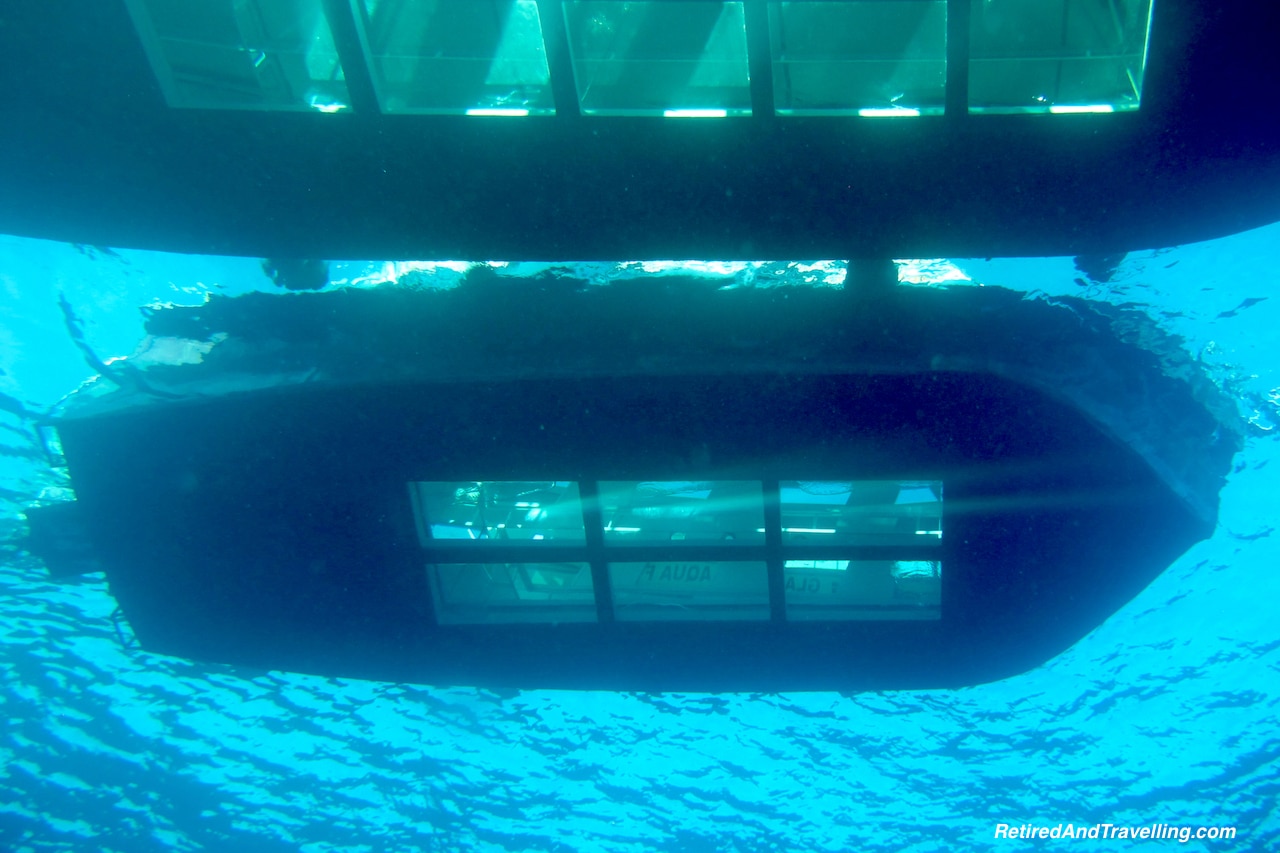 Slowly going deeper we swam across what looked like a desert with sand dunes. We were certainly getting our swimming exercise. 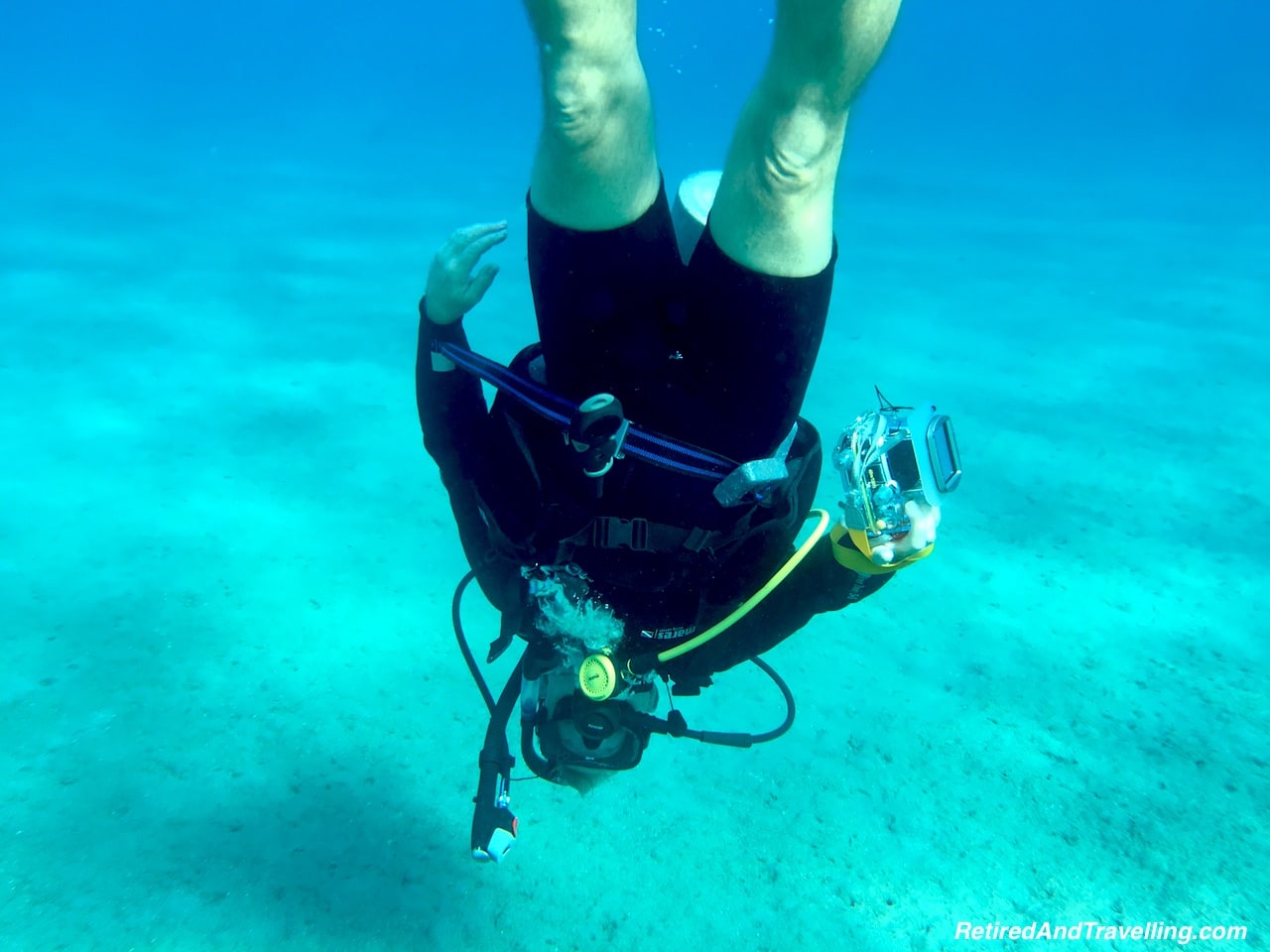 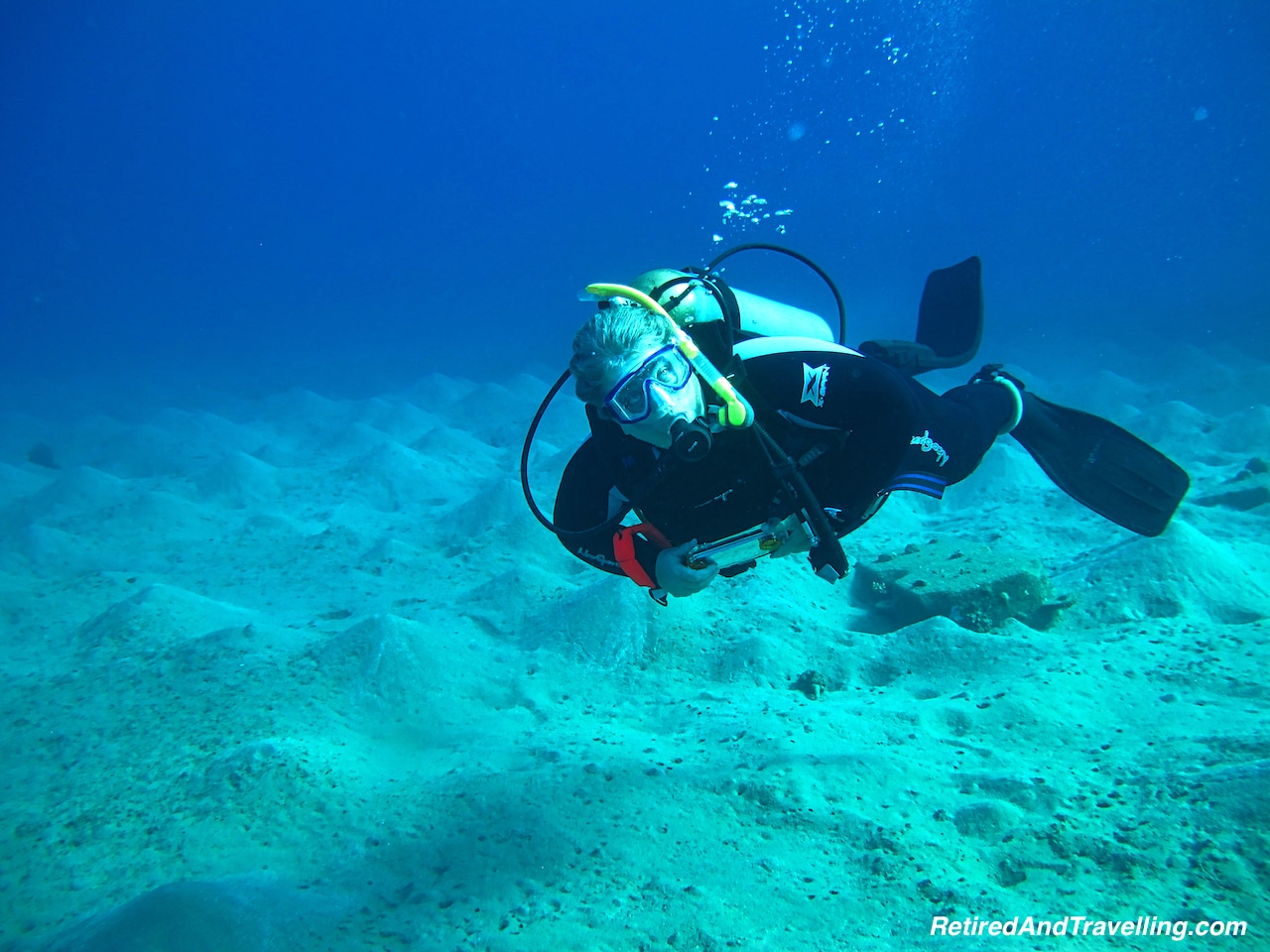 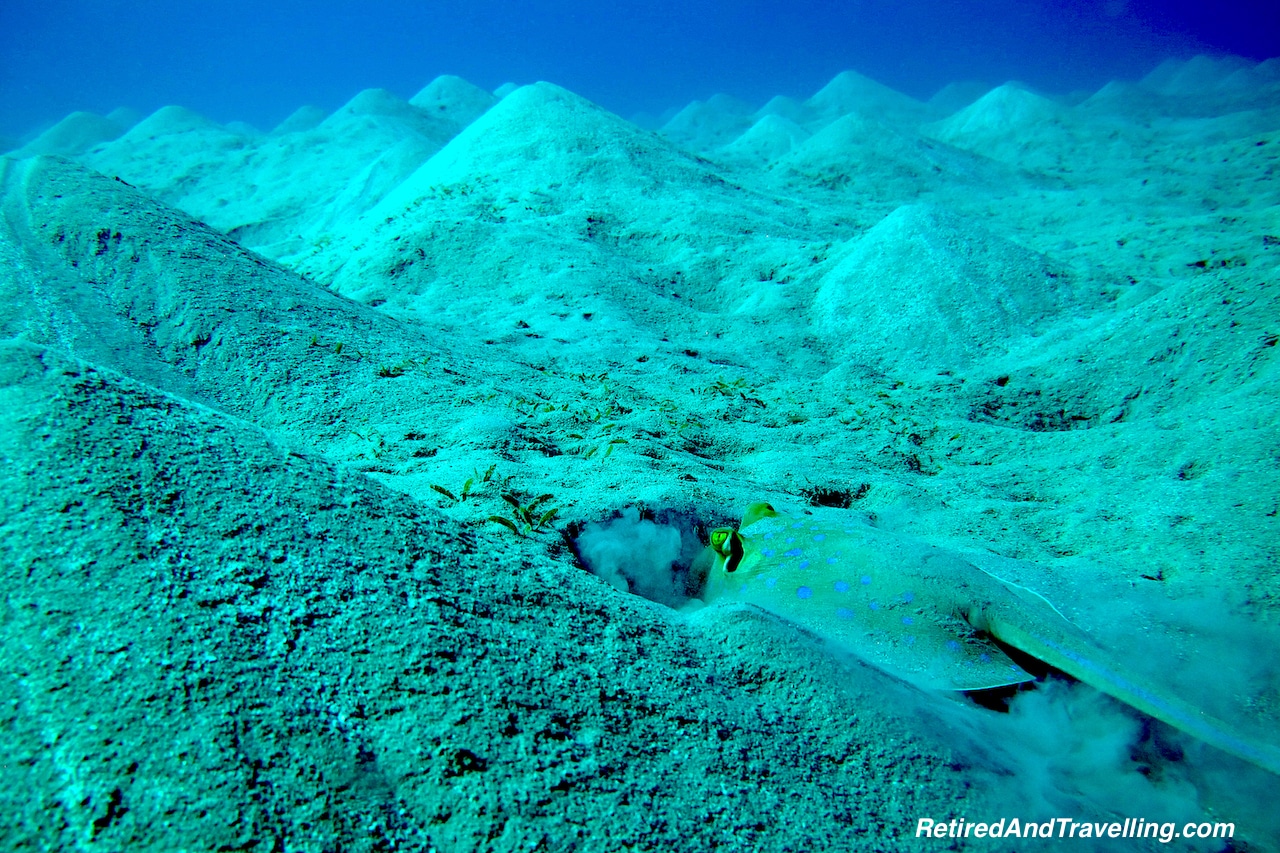 The deeper reef had large schools of immature fish swarming. We only saw hard corals – no fans, sponges or anemones. 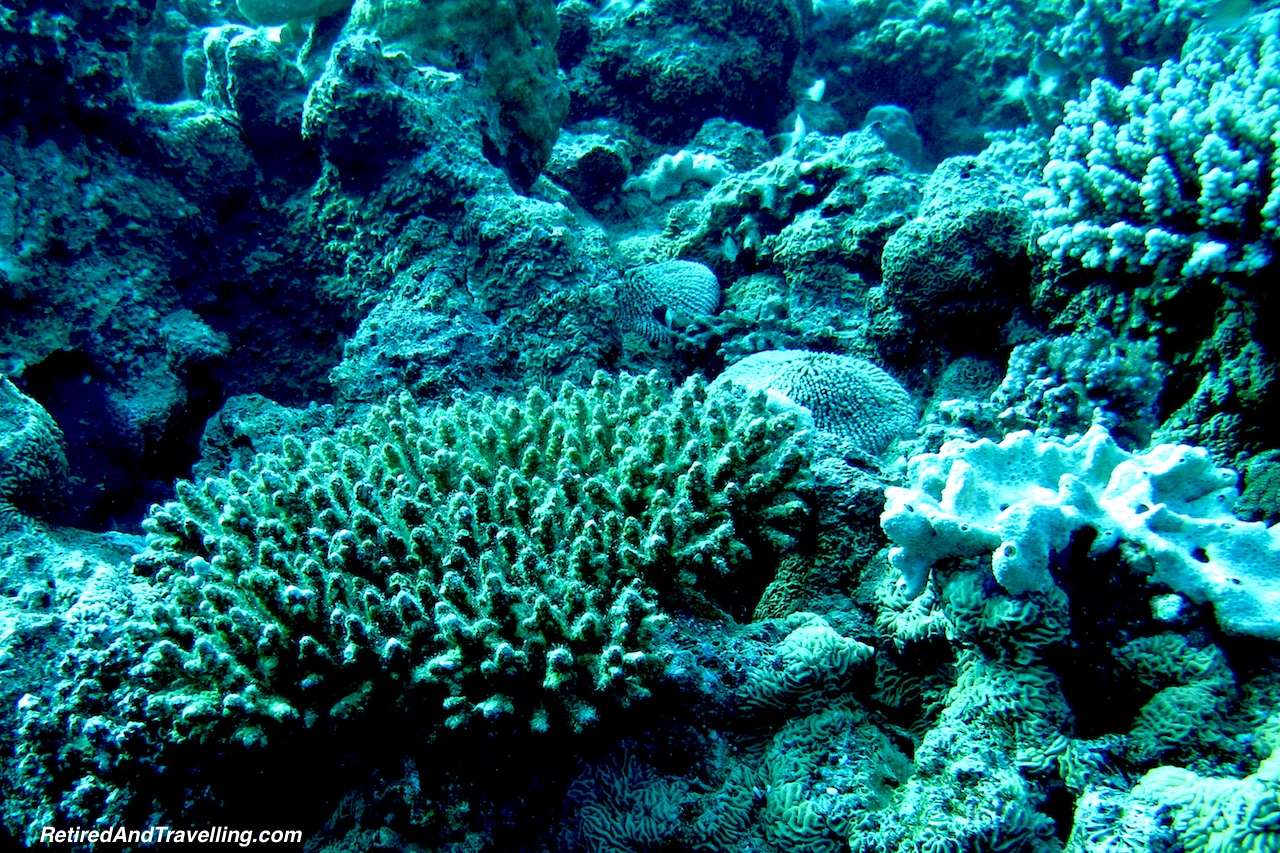 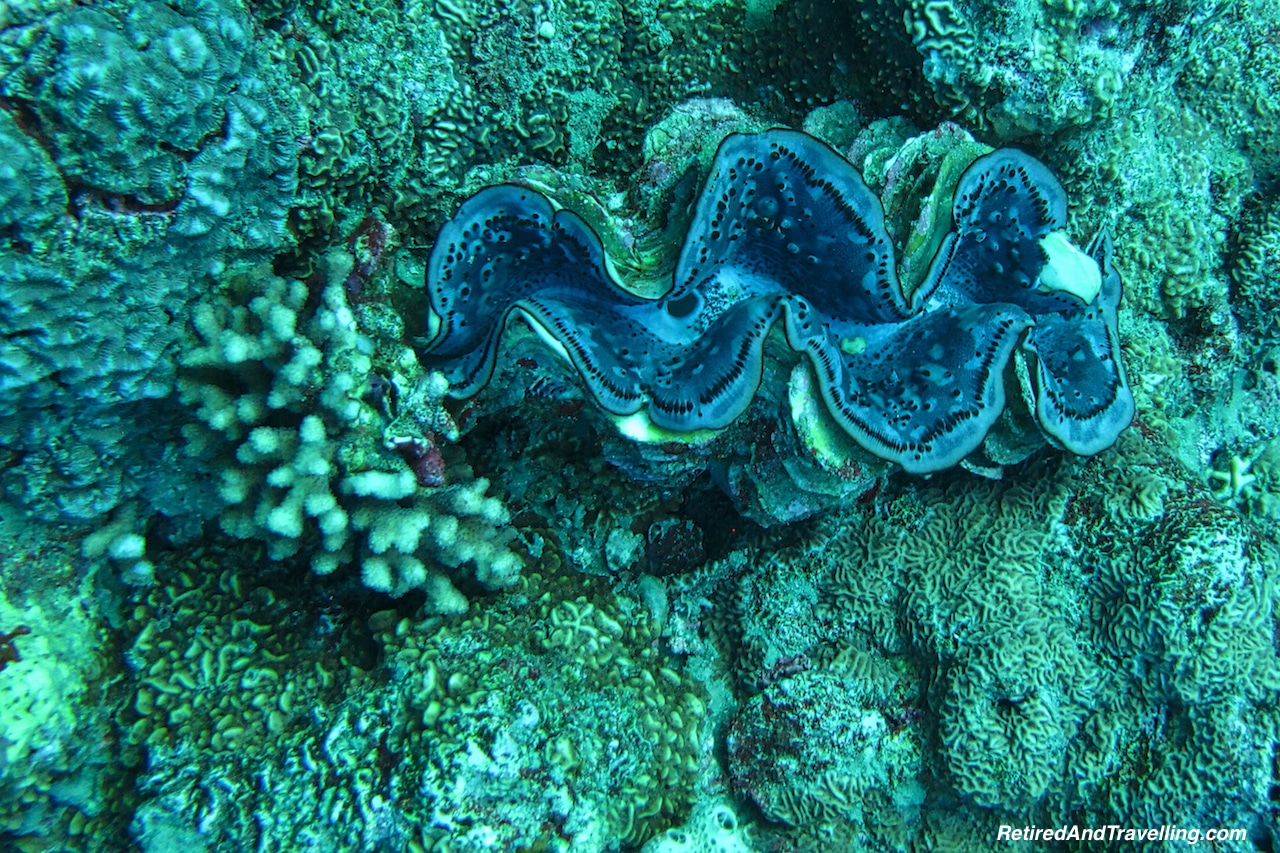 At one point on the way back we stopped to take a picture of a giant grouper. 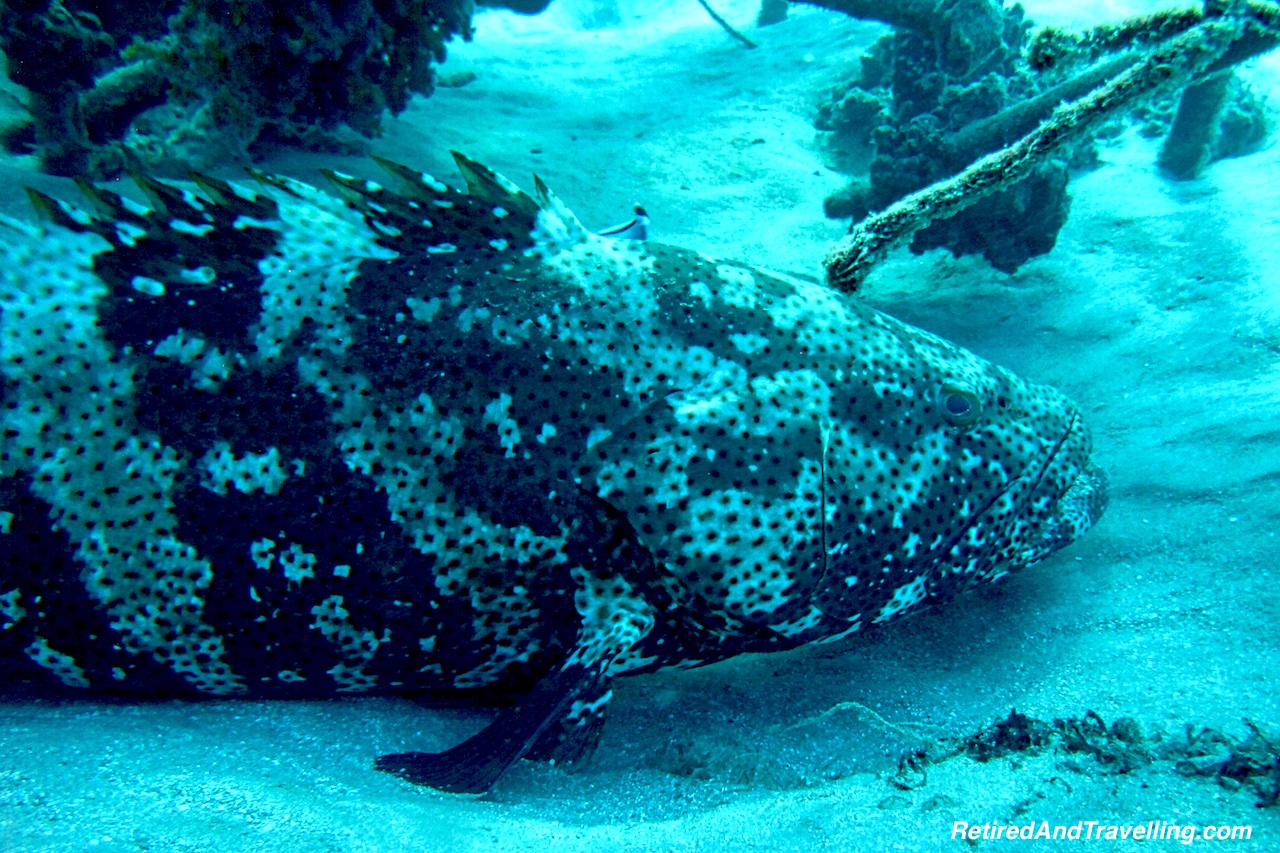 Along the way we saw the new fish we had been watching for when scuba diving the Red Sea. The glass fish were tiny and translucent. The crocodile fish looked like a rock fish until you saw its distinctive snout. 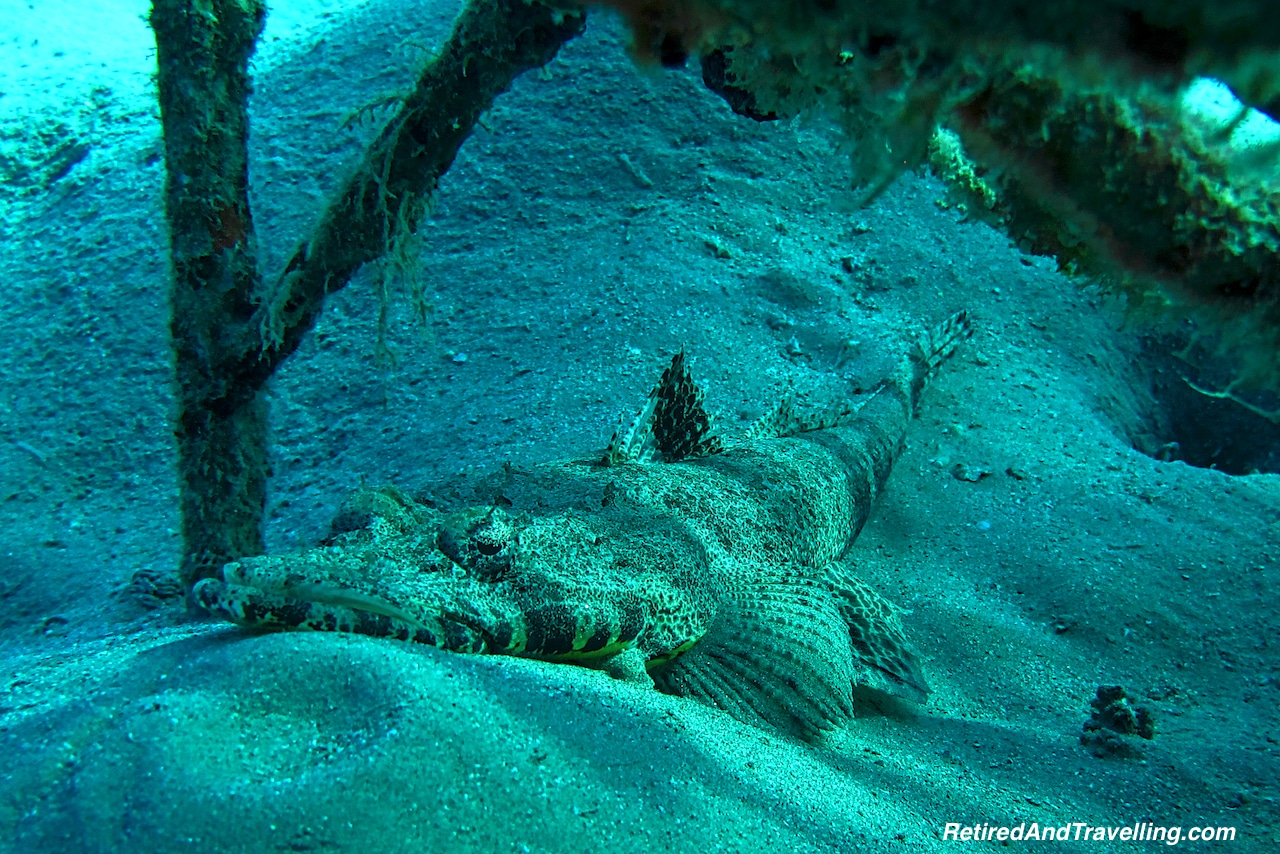 We Would Go Back To Dive The Red Sea

It was a long swim back. It had been almost as much a swimming expedition as scuba diving the Red Sea. We surfaced sooner than we had wanted when we bobbed like a cork. Dragging ourselves out, we trudged back to the dive shop with our gear. This was certainly as far from concierge diving than we will ever get. It was all do-it-yourself! 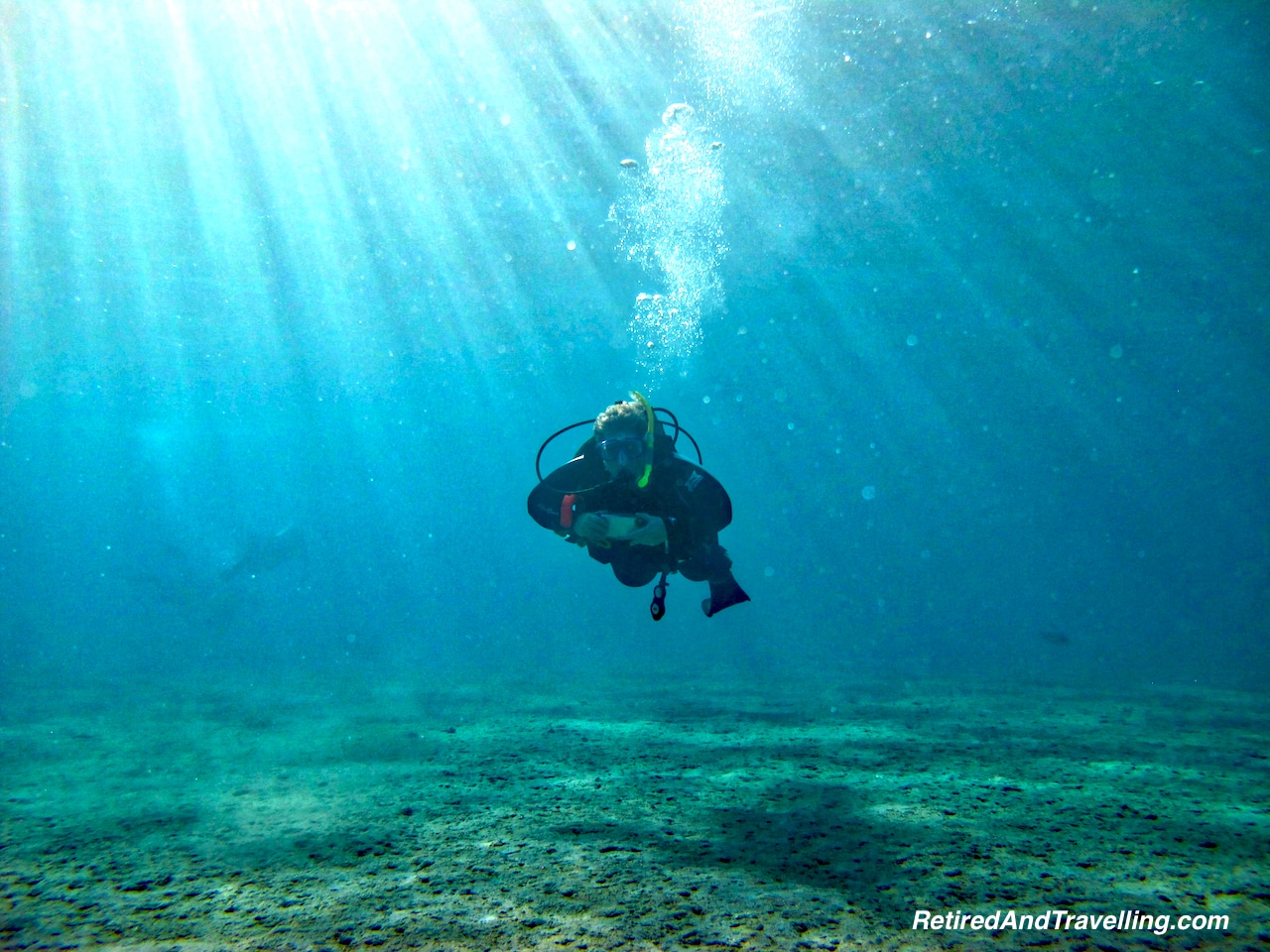 We declined taking a second night dive. This spot was certainly not exciting enough to go through the effort of a second dive.

We often find that scuba diving from a cruise ship or even resort scuba diving will not give you the best scuba diving in an area. Much like we get a taste test of ports when we cruise, we get only a small sample of what scuba diving might be like. We didn’t really get much of the Red Sea scuba experience. We would need to come back to really deliver on the promise.