Mountain Views On Our Way To Ronda

We spent a week on Spain’s Costa Del Sol in Marbella. Most of the time we strolled the beach towns. But you can’t stay in Marbella and not think about a few day trips. With the sun shining, we headed off for a day in Ronda. We have spent a lot of time exploring the white hill towns of Italy, but this would be our first view of a white Spanish hill town in Andalusia Spain.

We figured out the local bus routes and arrived at the bus station. It was easy to get a return ticket to Ronda. We settled in for a couple of hours on the bus. We had heard that the views were half of the excitement of the trip to Ronda. There were several local stops before the bus turned north on the mountain road.

As the bus wound it’s way north, it continued to climb and offered us amazing vistas in all directions. The sea on one side gave rise to a view of Gibraltar in the distance and David thought we might even be able to see the entrance to the Mediterranean. 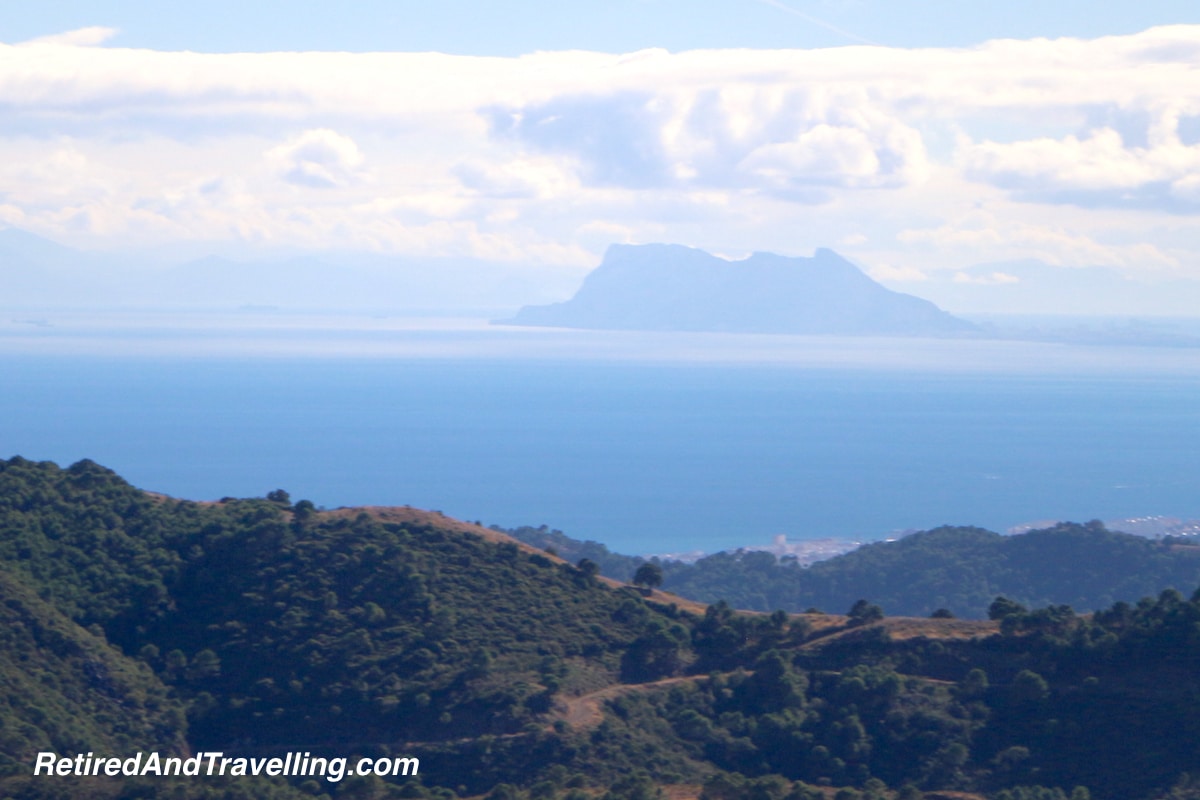 As the sea views fell away, the sky and mountain views opened up. We were up with the clouds and could see the shadows cast by the clouds on the valleys. While well wooded for most of the climb we ultimately came to more rock filled mountains with sparse trees. 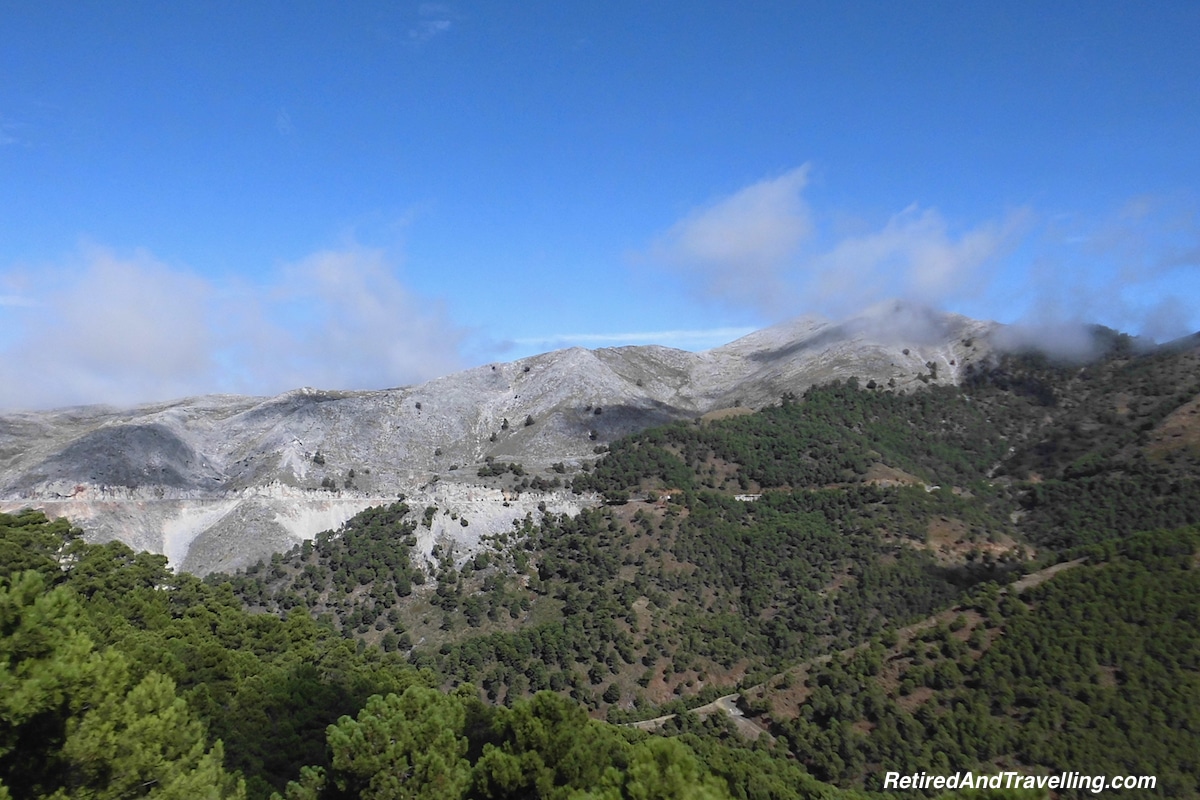 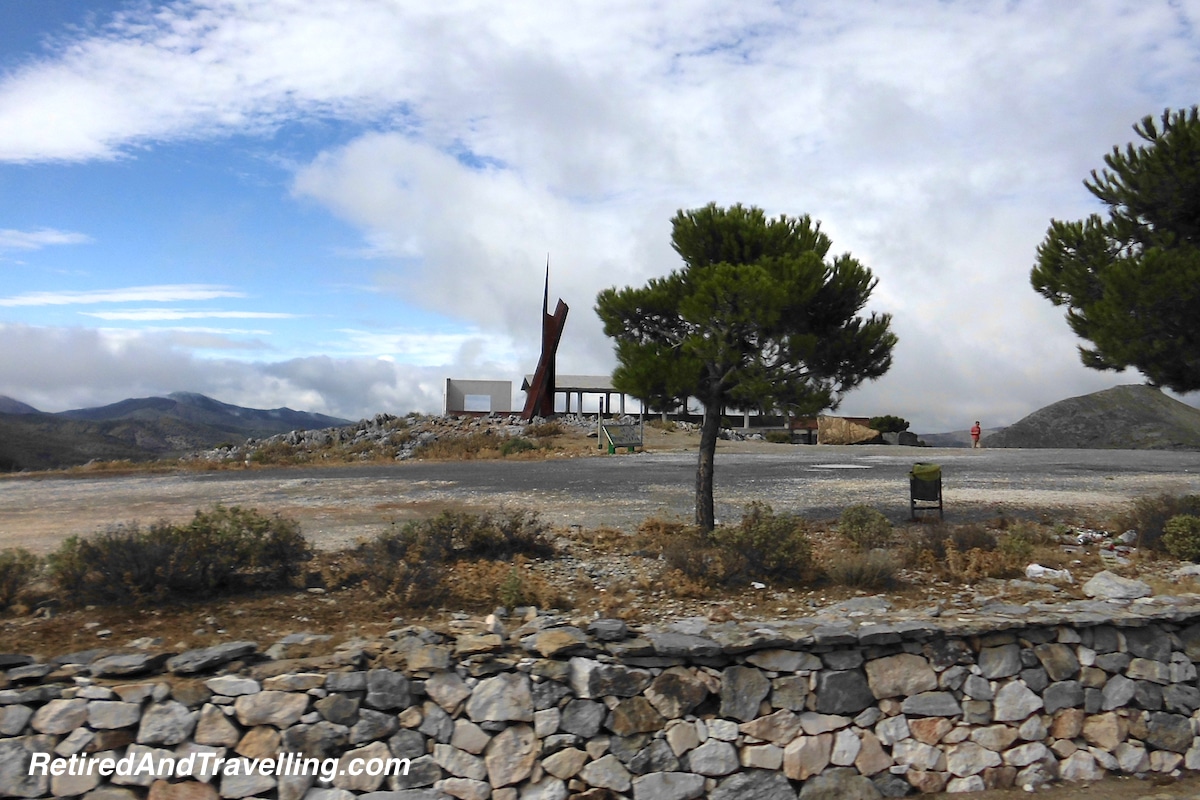 Even before we hit Ronda, we could see a Spanish hill town nestled in the mountains. 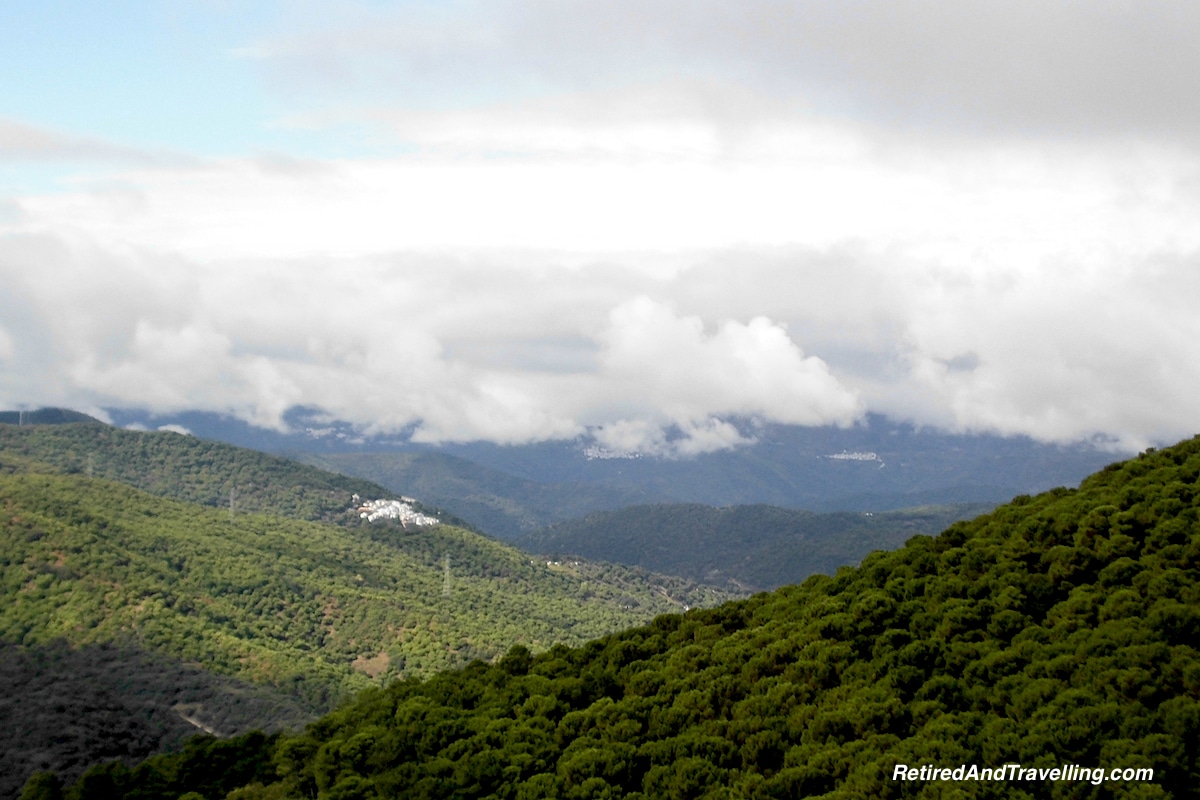 The ride up the mountains would have been worth the price of the bus ticket, even if we did not get off.

Ronda Was A Great Example of A Spanish Hill Town

Ronda was the first major stop on this mountain road headed to Seville. It seemed to have some valley land with some local farming – and was much bigger than I expected. The bus wound it’s way to the station and let us off to find our way to the historic part of town. With the help of the GPS, my iPad map app and some directions from a local store keeper, we managed to easily find our way. We were sure we were going in the right direction when we followed the Chinese tour group for a bit.

Arriving at the Plaza de Toros, we picked up a paper map to guide us around the old town. We headed for the first observation point and joined the other tourists oohing and ahhing at the drop and the views. 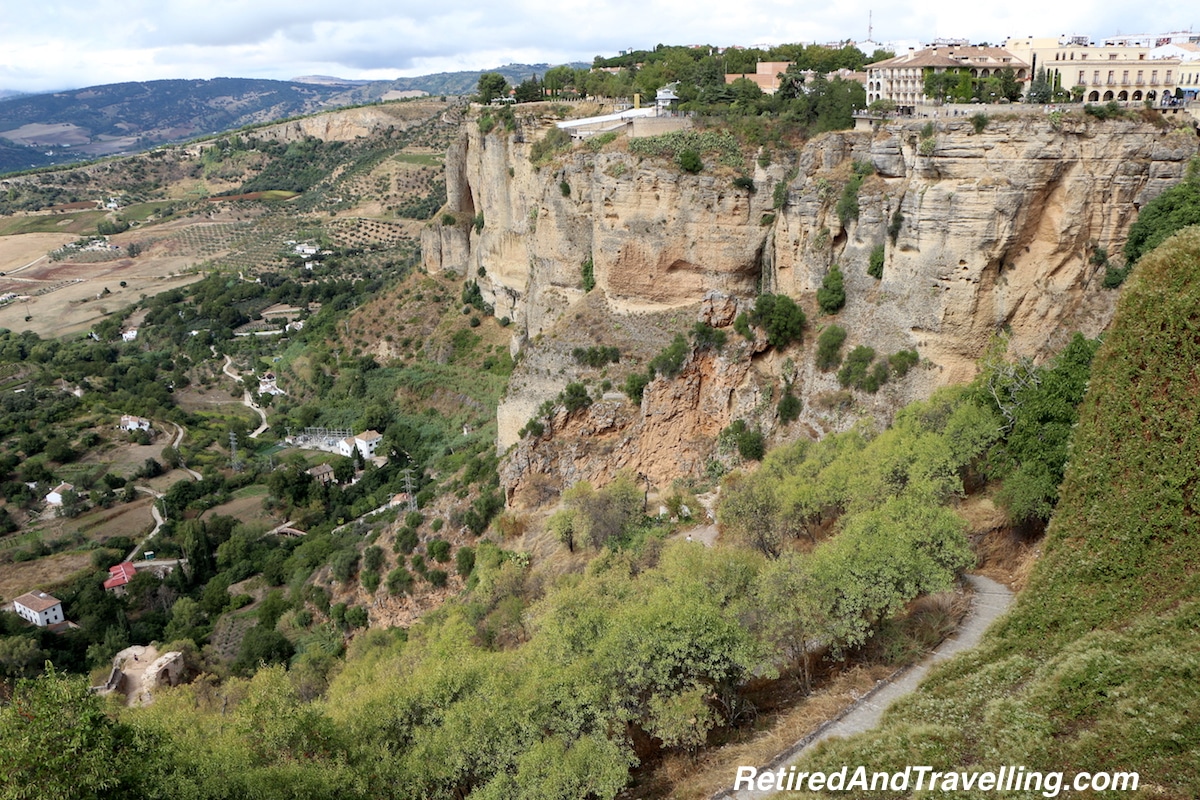 Winding our way along the cliff side we got to the “new” bridge that was “the” site to head to Ronda for. As advertised, the view over the gorge was breathtaking, with different sights from many spots. Looking in one direction, I could see my next target spot in the distance below the bridge. 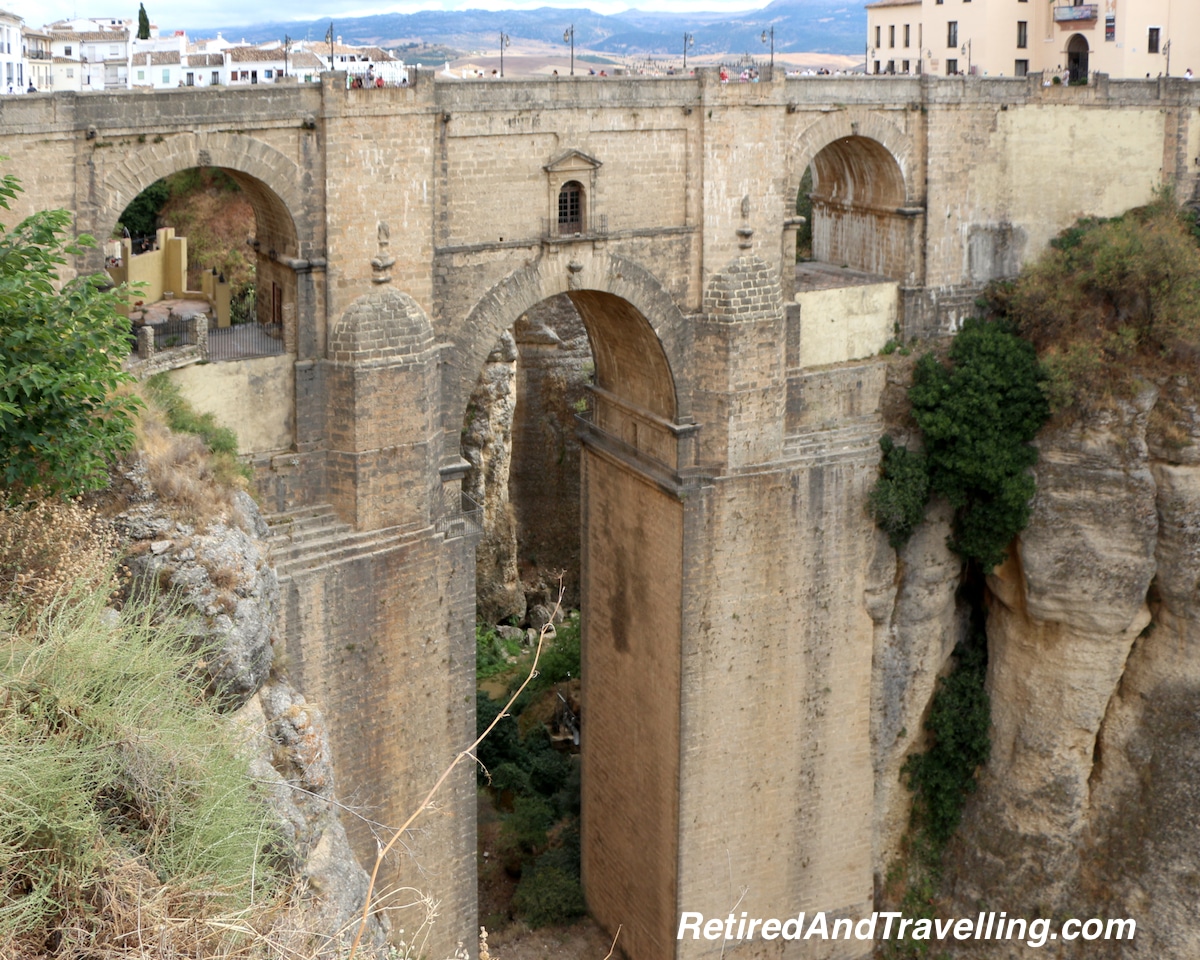 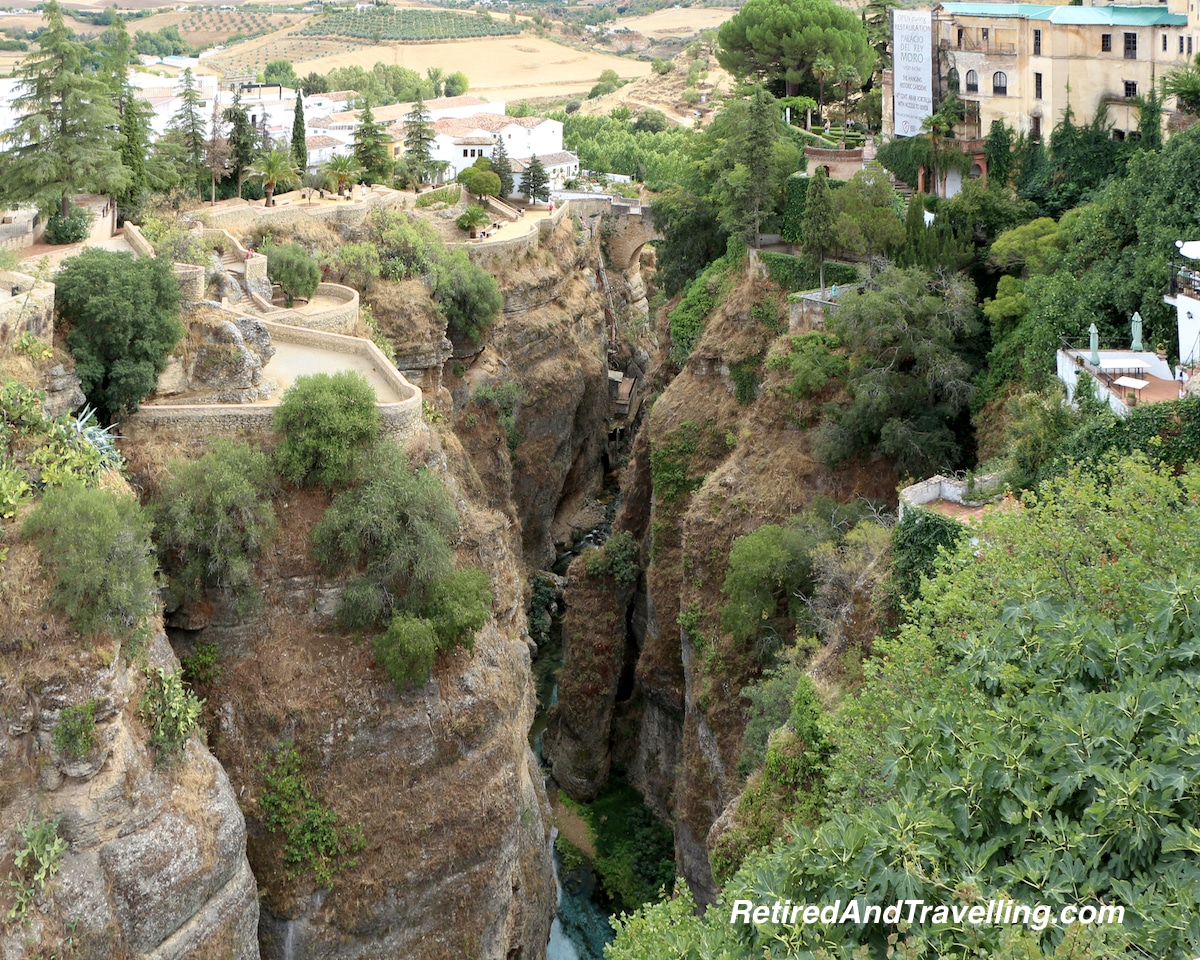 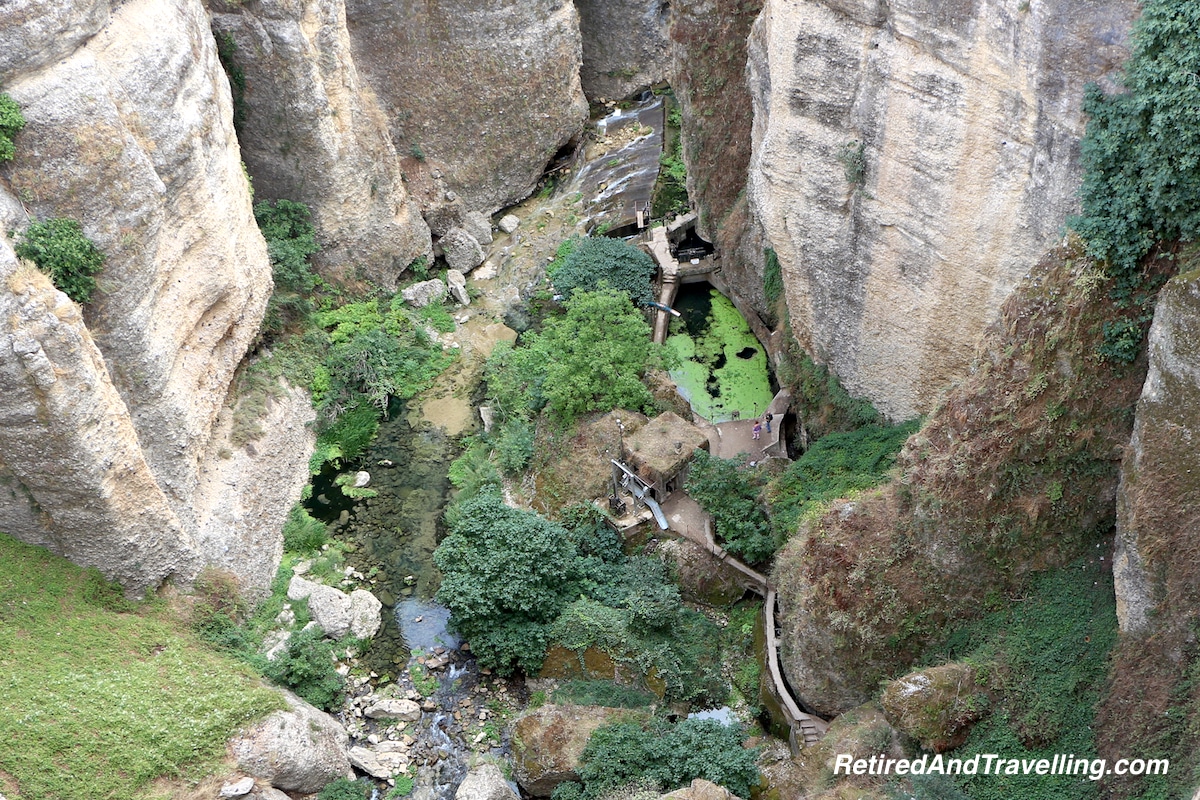 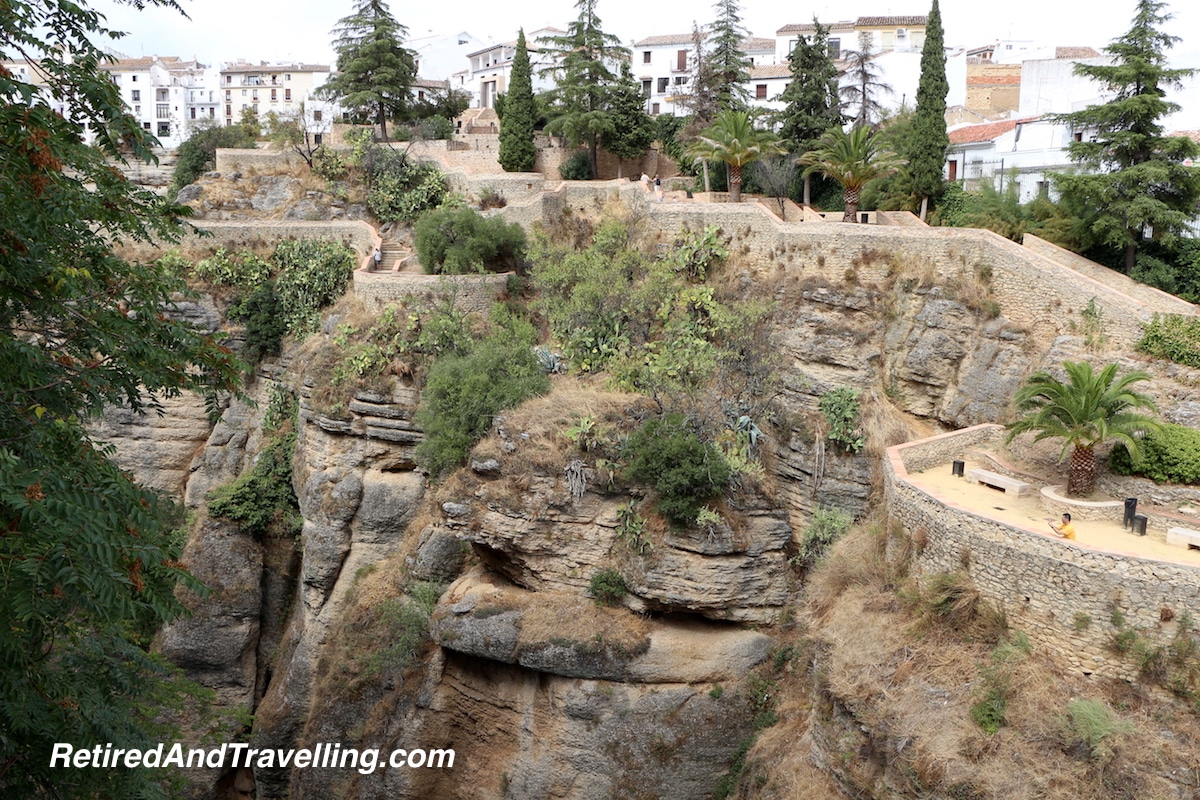 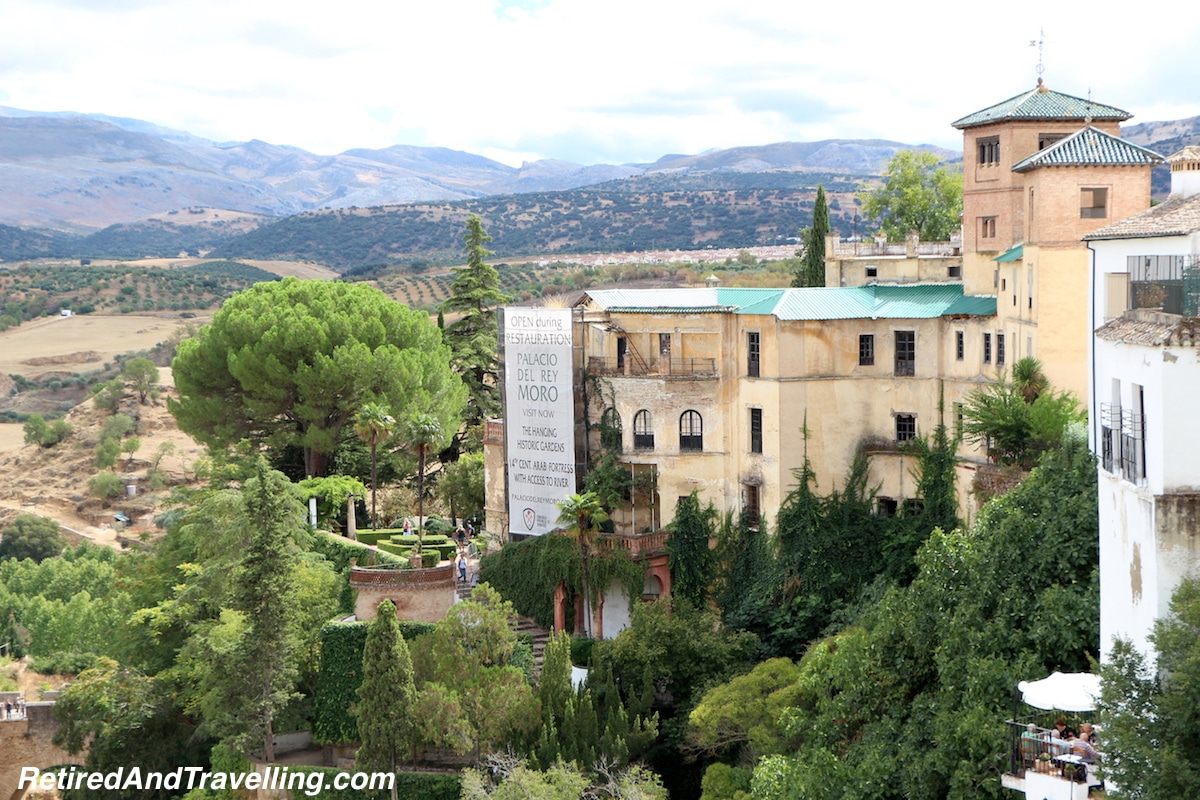 Walking along the main road we decide to head up first. Wandering into the shops, we admired the brightly colored leather bags. Street performers filled the air with Spanish music. 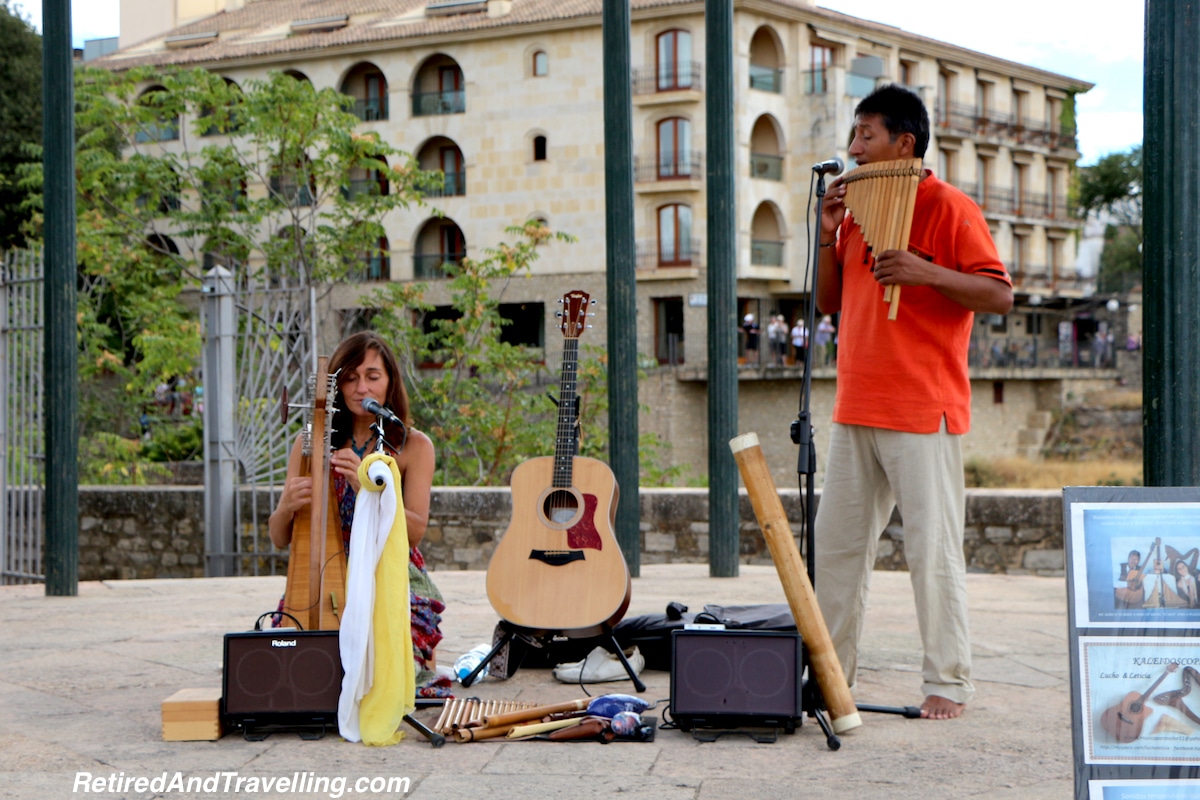 We found the left turn and headed down to the Casa del Rey Moro. It was a steep cobblestone road down, which would be totally impossible to navigate in the rain. And every step down meant a corresponding step back up.

Lunch in the garden at the Casa was exactly what I had targeted. We had a great view across to the other side of the town. It was an iconic image of a Spanish hill town. When we looked down we could see the “old” bridge and down below it the original bridge that had crossed the gorge. We swapped cameras with the American couple that had driven up to Ronda, to ensure we got at least one good picture with us both in it. 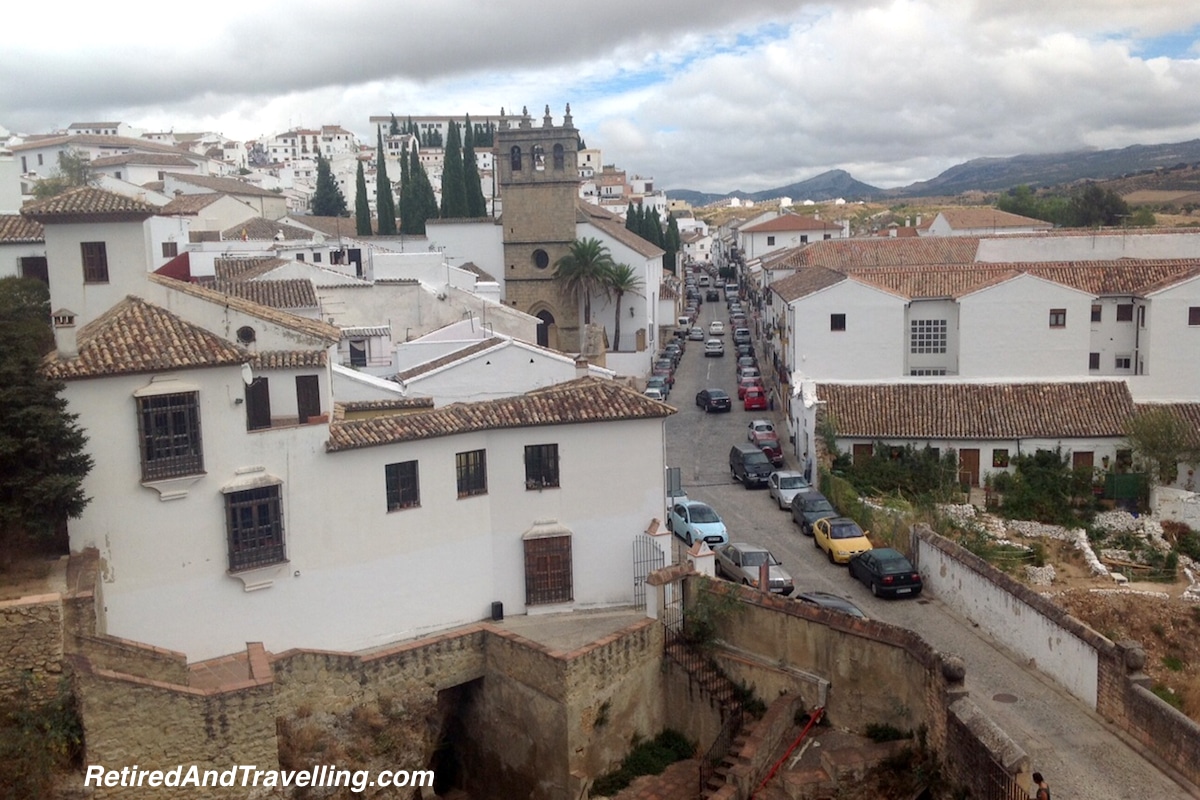 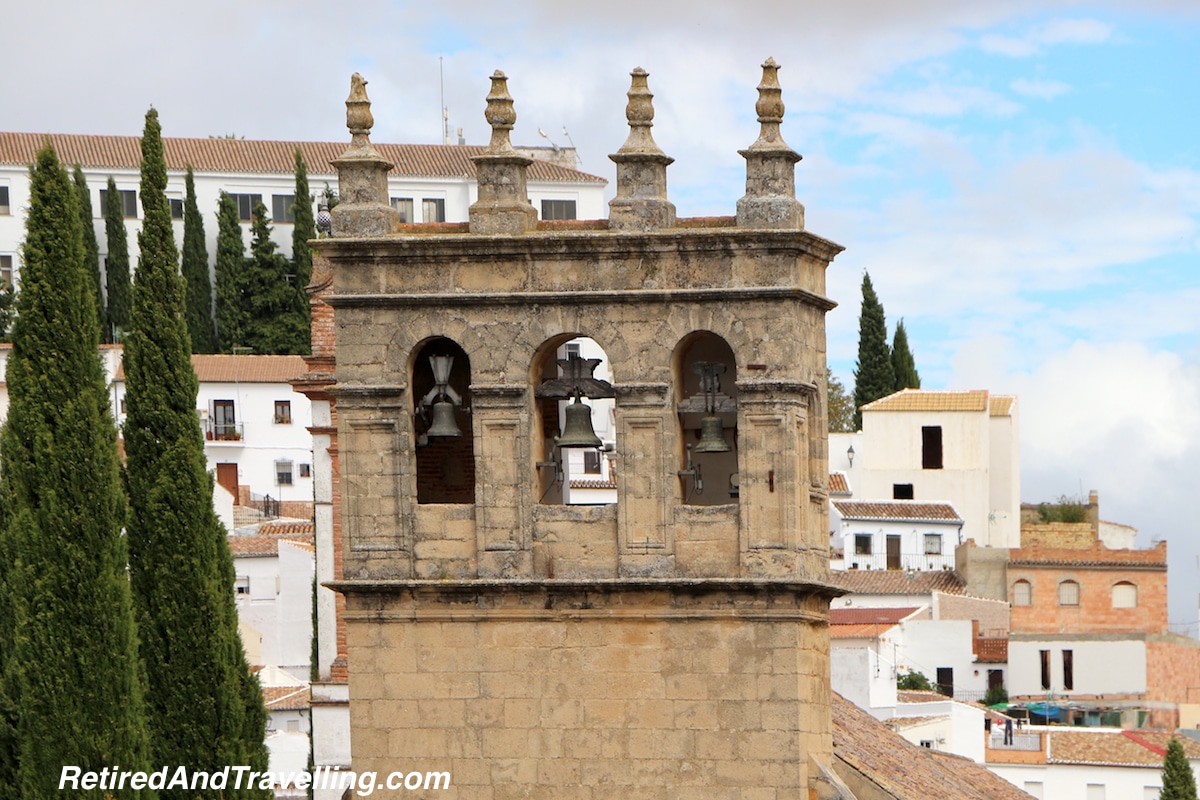 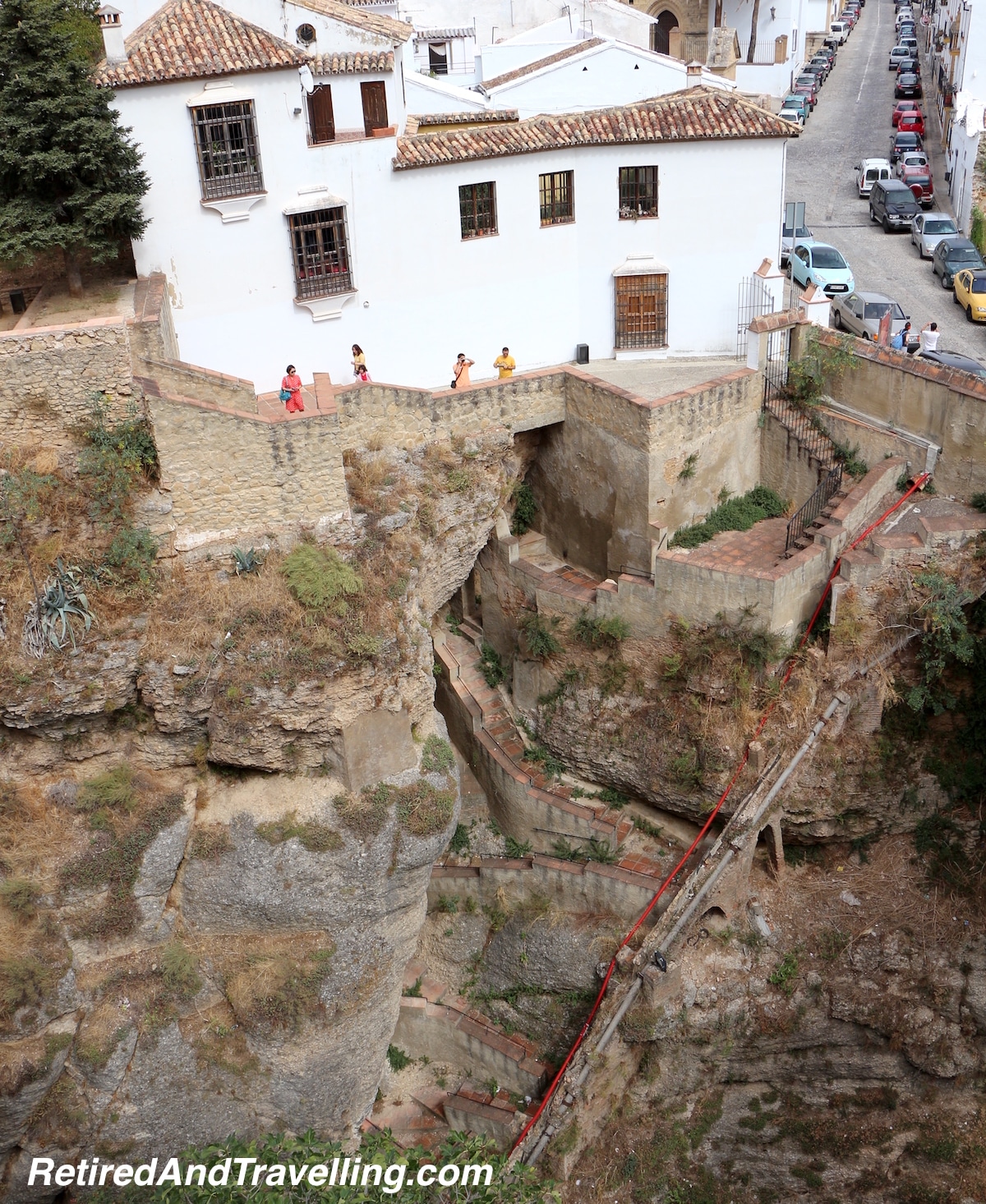 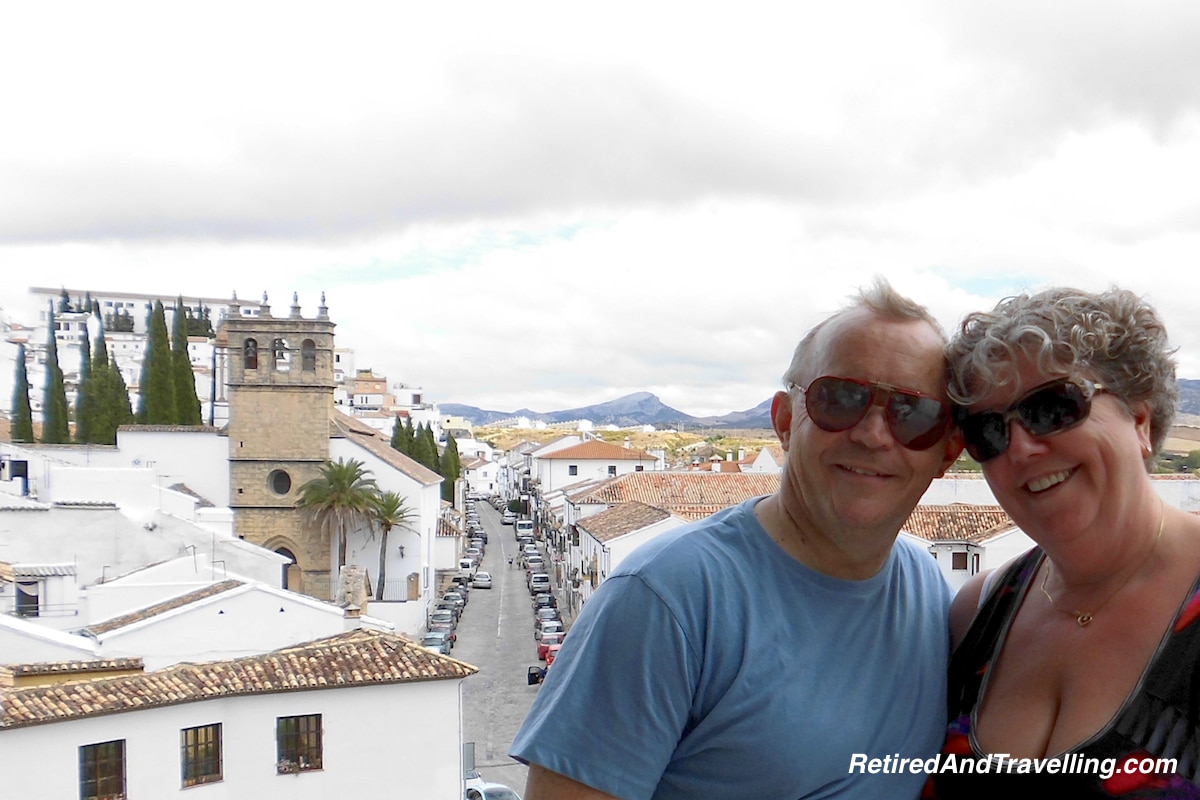 Billy goat Linda plowed back up the cobblestone street, happy to hear David huffing and puffing beside her. Not to be deterred, we continued to walk uphill on the other side. We stopped several times to look at the buildings in the town. Maybe we stopped to catch our breath! You will need good legs or lots of breaks if you explore a Spanish hill town. 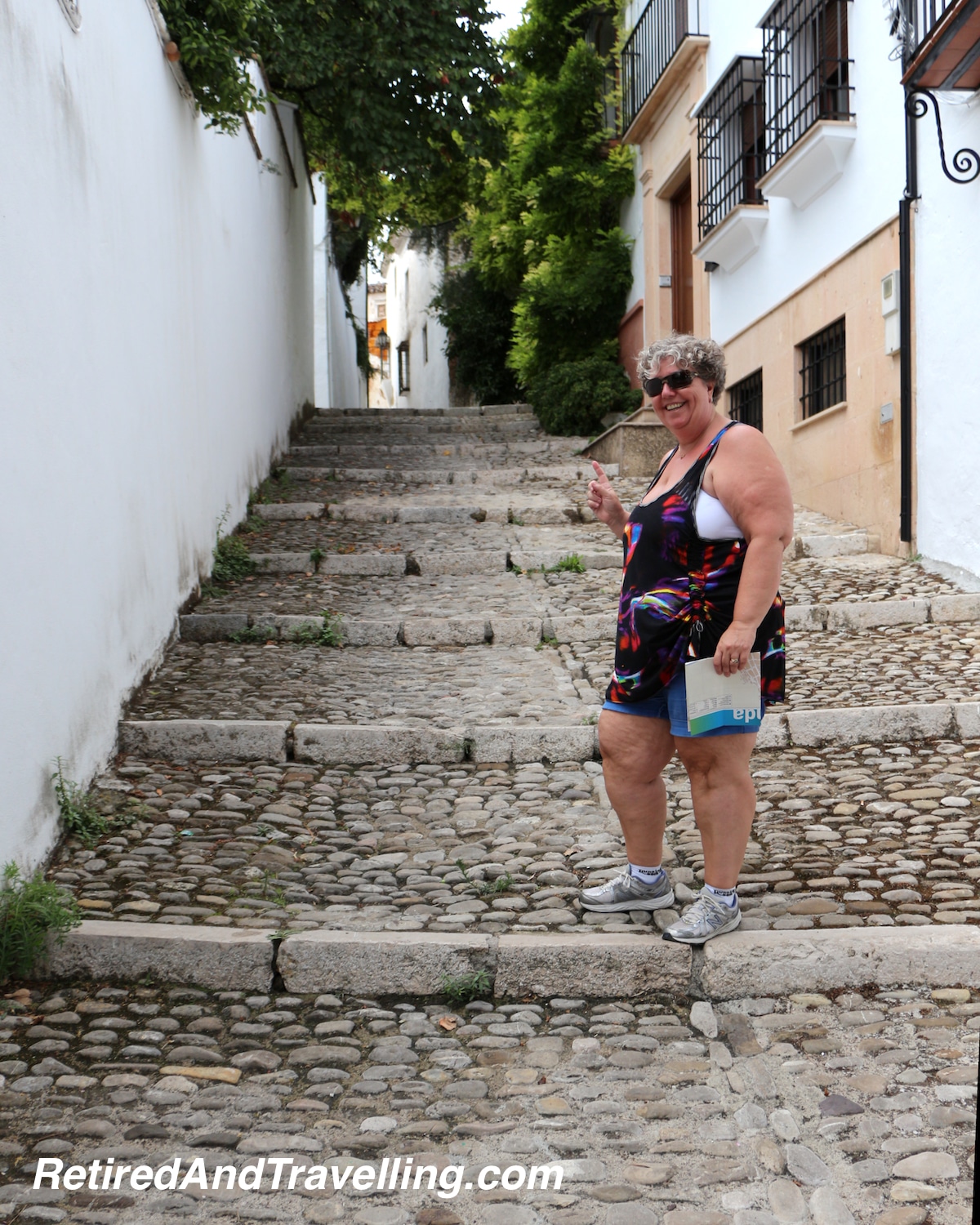 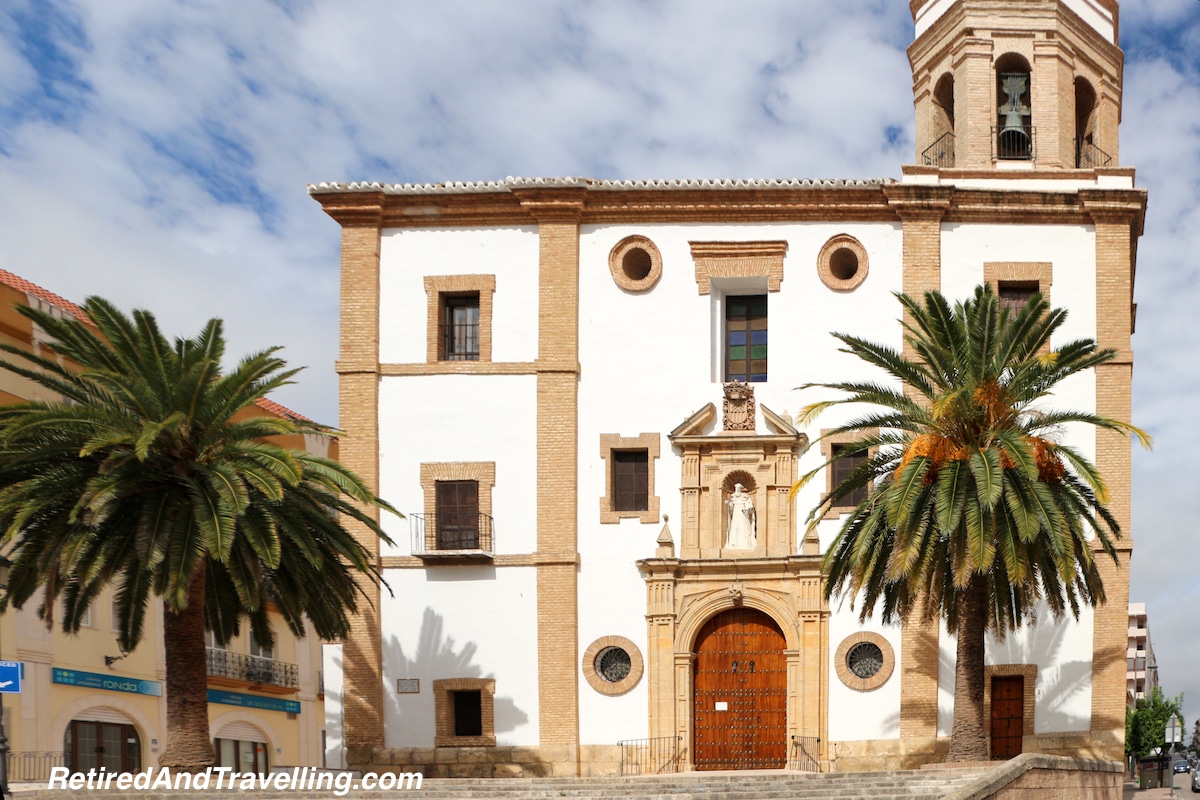 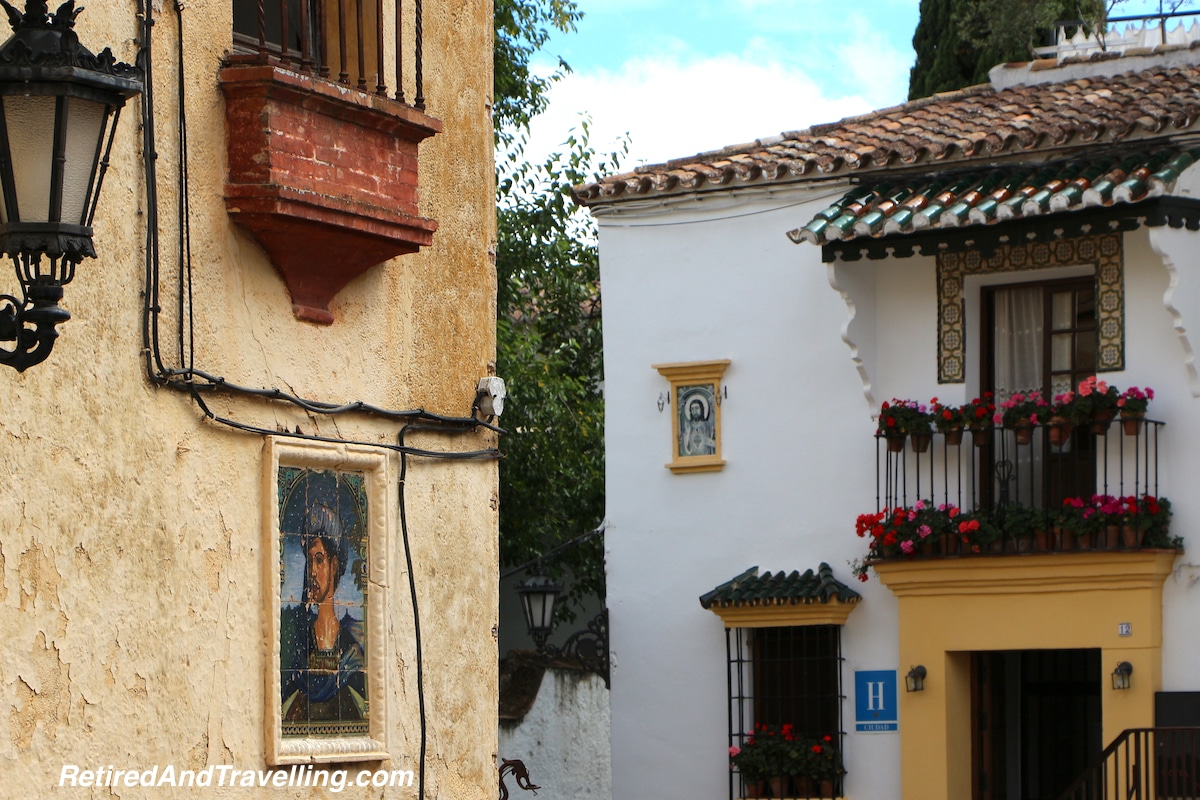 Another View Of Ronda The Spanish Hill Town

We found yet one more lookout vantage point overlooking this great example of a Spanish hill town. We could see the bridge in the distance. When we looked way down we could see the more hearty souls who were walking down the cliff paths. David was smart enough to not even hint at that. 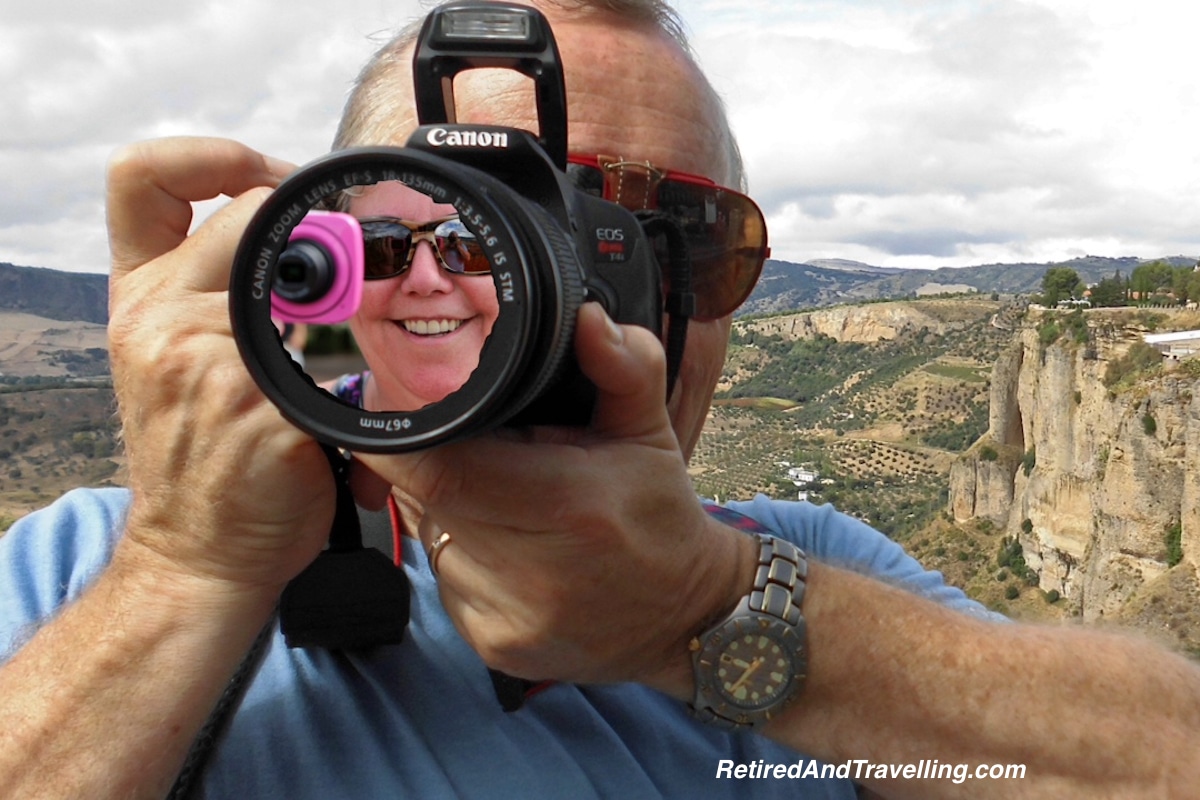 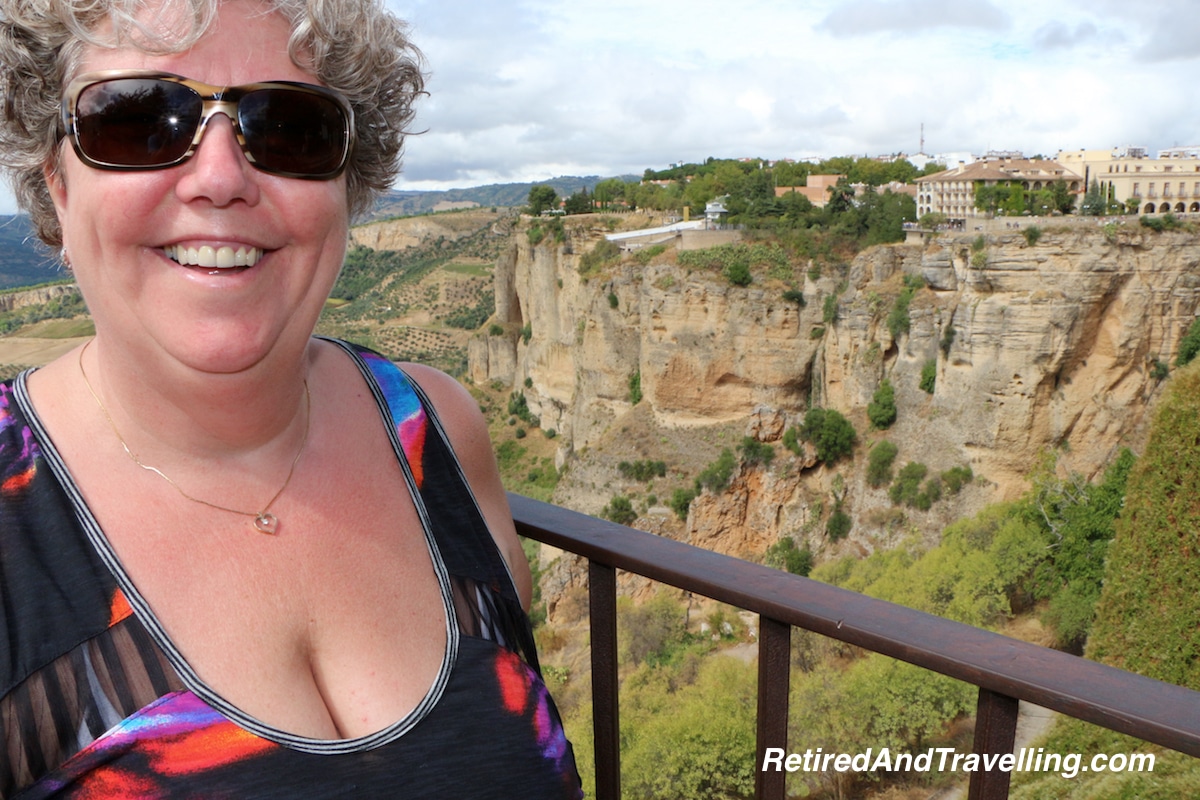 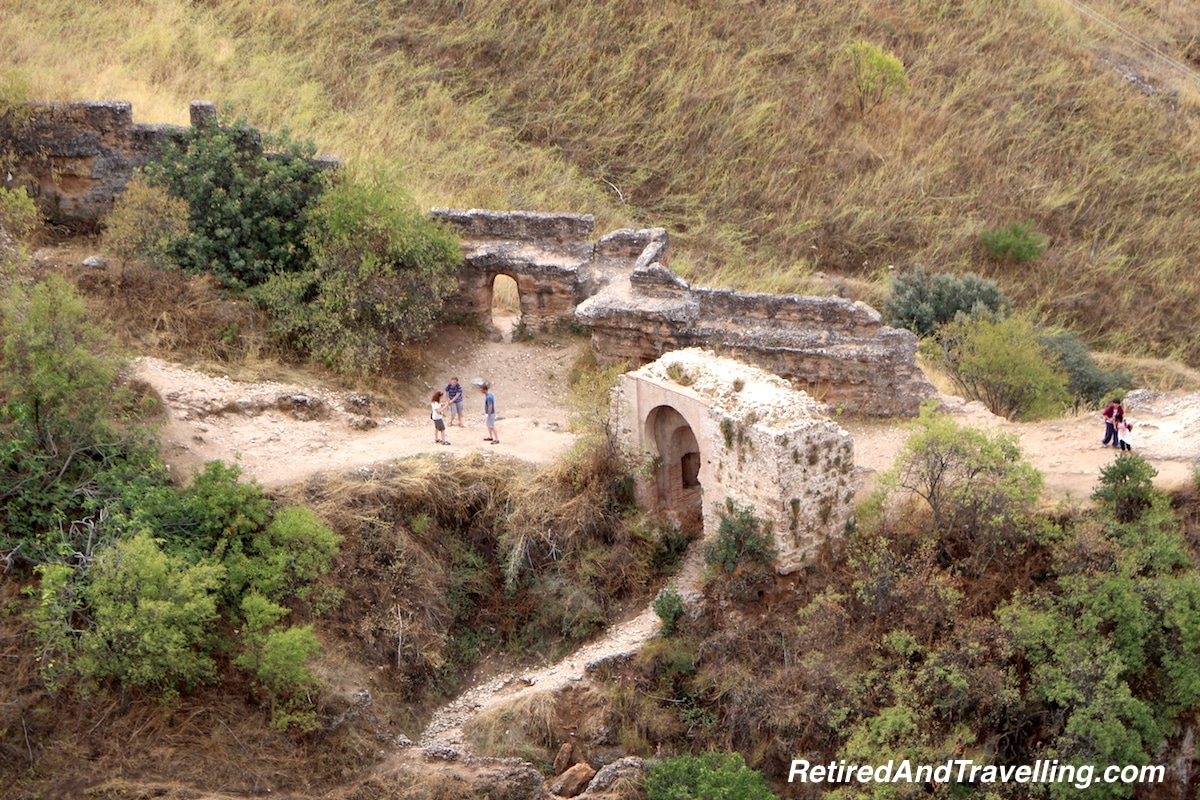 The walk back to the bus station was more interesting and more direct. The walking strassa offered shopping and the obligatory real gelato stop. While they didn’t offer taste tests, we figured we were safe with extra dark chocolate and creme brûlée. Chocoholic David could not pass on the chocolate and sometimes the pout even worked! 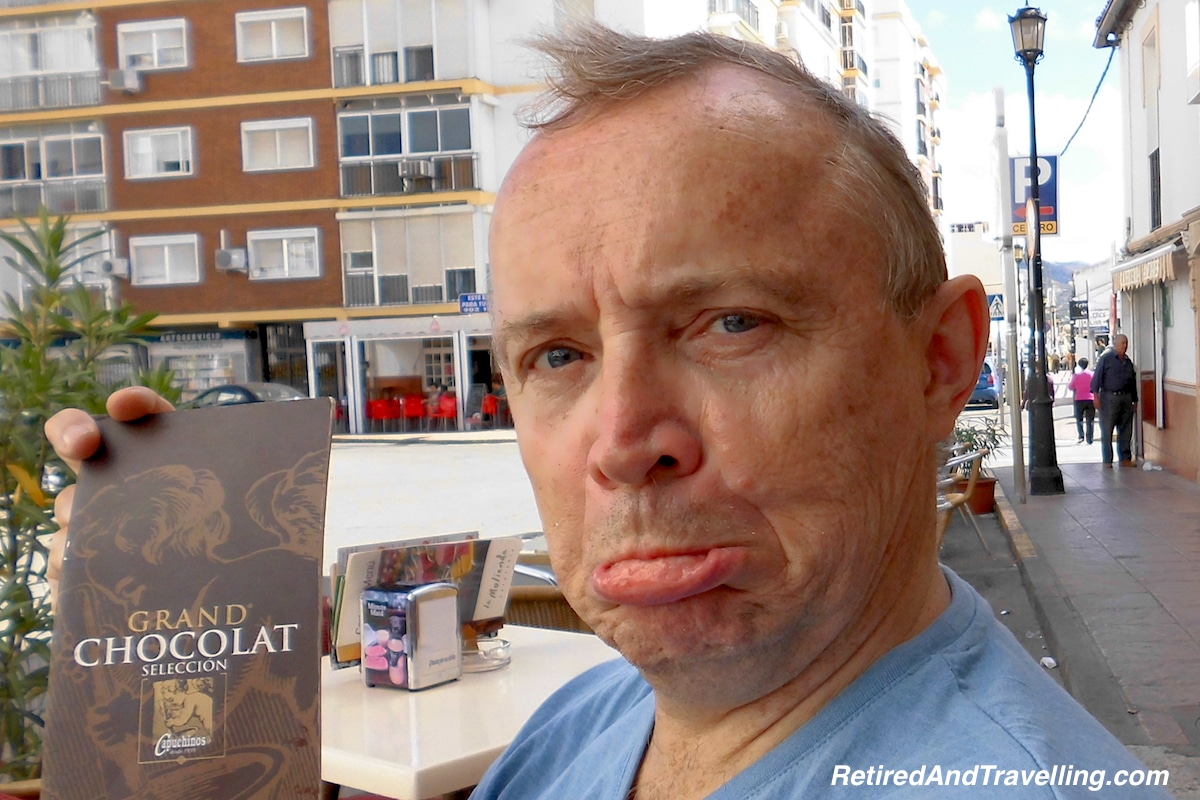 A chocolate stop and a quick coffee beside the bus station would keep us until we had a picnic in our room that night. We would be too pooped to hunt down a new spot for dinner.

Mountain Views Heading Back to Marbella

We had really enjoyed exploring Ronda. A day trip to a Spanish hill town should definitely be on any Spain itinerary. The bus trip down was as good for sights as the trip up had been, with a different light to tempt David to take out his real camera. David shot rapid fire, ensuring we would spend hours when we got back sorting thru the images.

As the water again came in sight, we could see Marbella far off in the distance. Nearing the city we found small housing enclaves built up on the hills. There would certainly be amazing views from these houses. 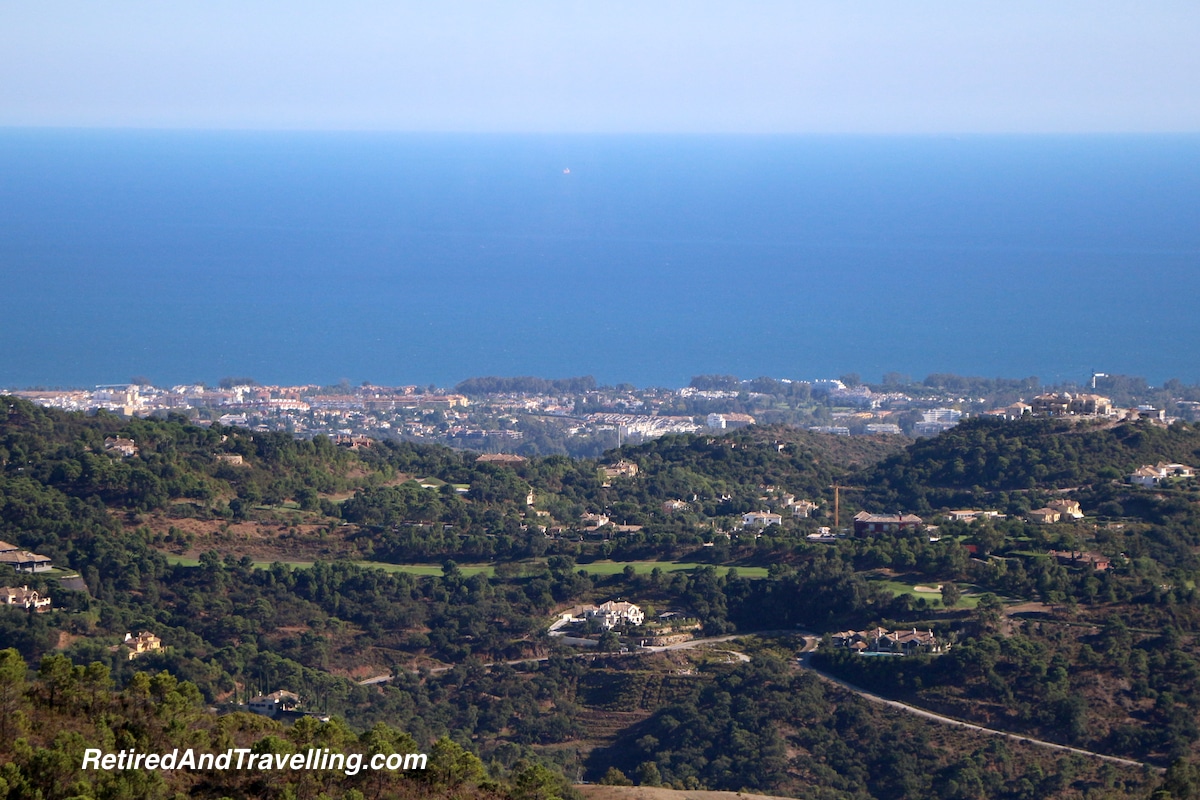 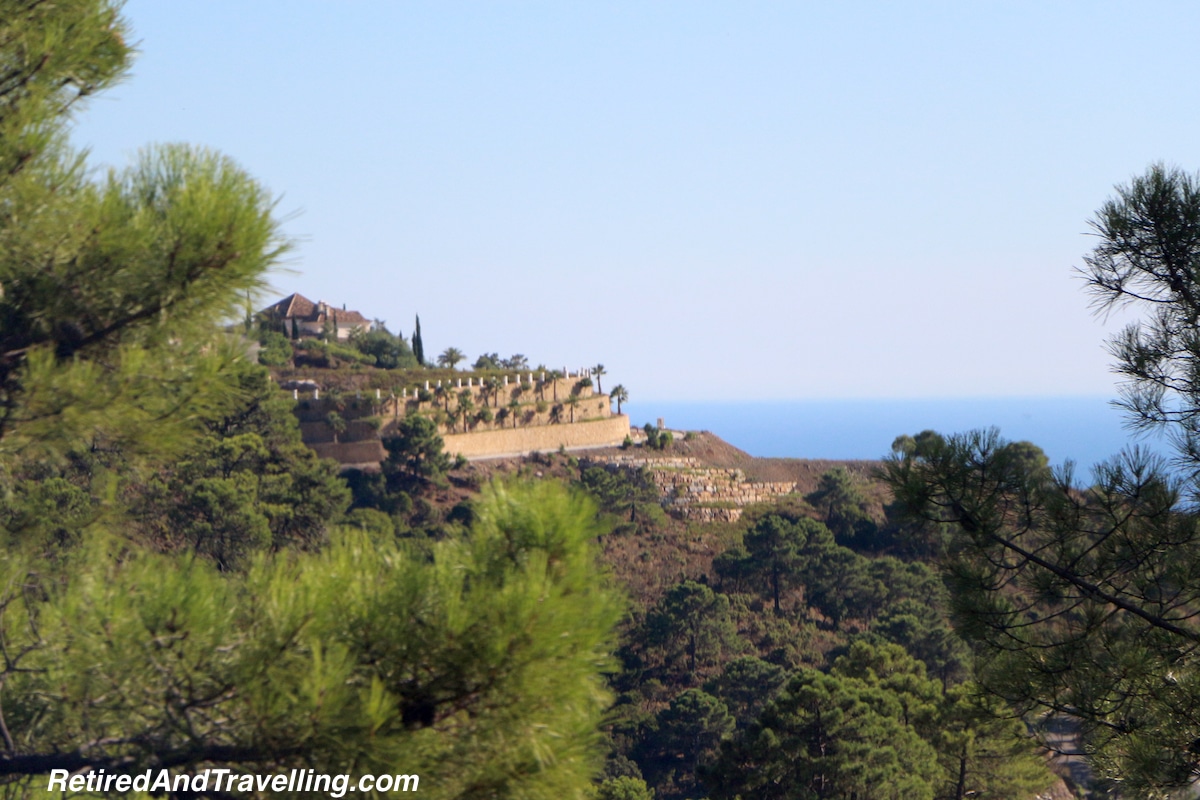 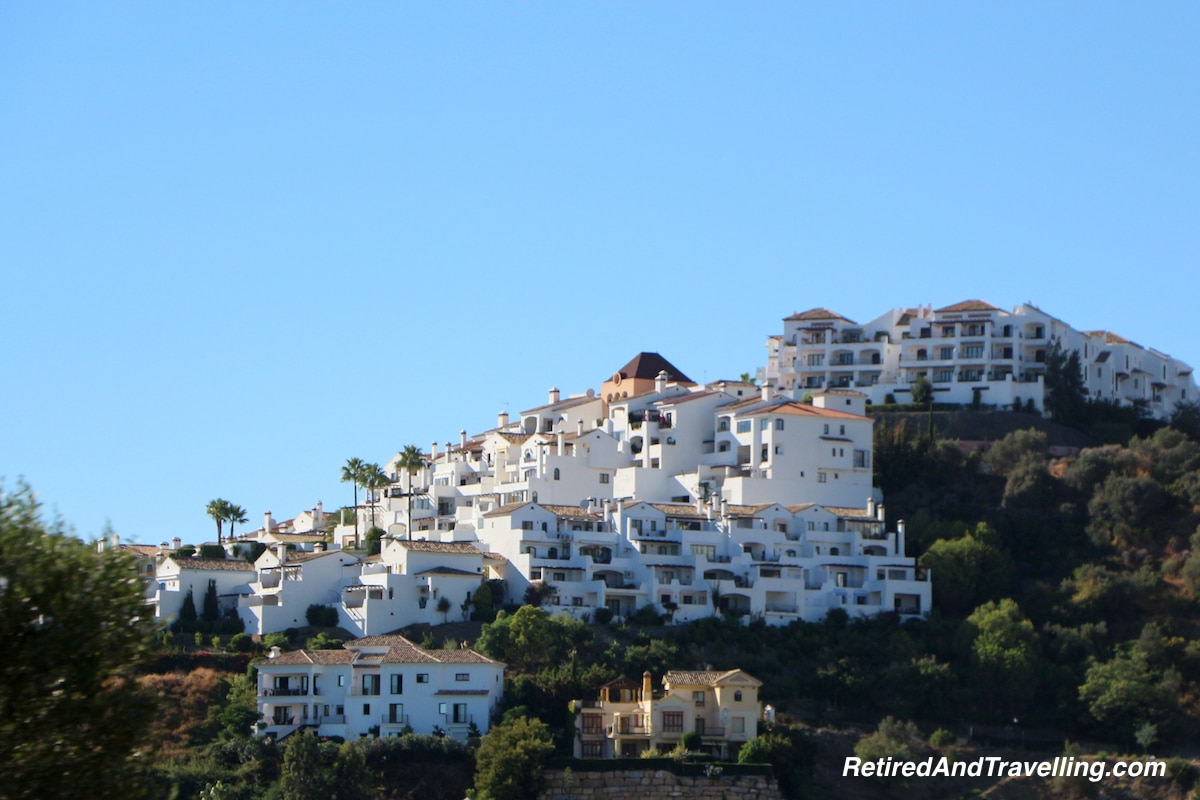 We spent a great day spent exploring Ronda before returning to Marbella. It was certainly a great example of a Spanish hill town in Andalusia Spain. If you rent a car, you can search for a much smaller Spanish hill town nestled in the mountains. Taking the bus to Ronda will free you to enjoy the great scenery all around you on the mountain drive.

Did you visit a Spanish hill town? Was Ronda one of your stops? Did you drive and detour or take the bus and enjoy the views? 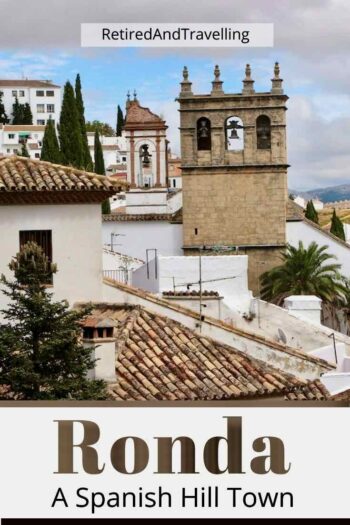 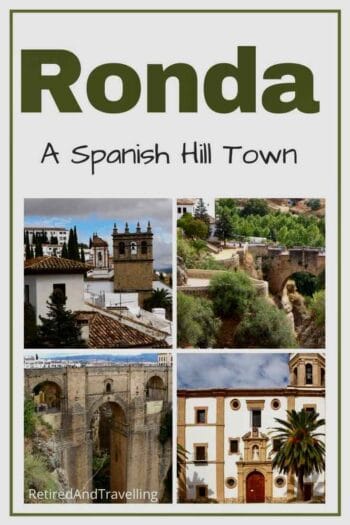 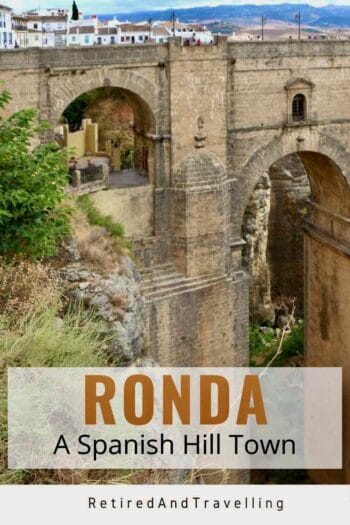