Finding A Swimming Hole in Puglia South Of Otranto

Staying in Lecce for a week, we headed out and found water and a swimming hole in Puglia!  We visited the town of Otranto and saw the Cattedrale E Cripta.  But we left drooling at the beautiful crystal blue water we found.

The map for the Otranto area showed many beaches in the Otranto area.  We had 4 stops marked on our offline map app for a swimming hole in Puglia!  We hoped we would not have to go back south to the great Santa Marie di Leuca sand beaches. But we were hopeful! 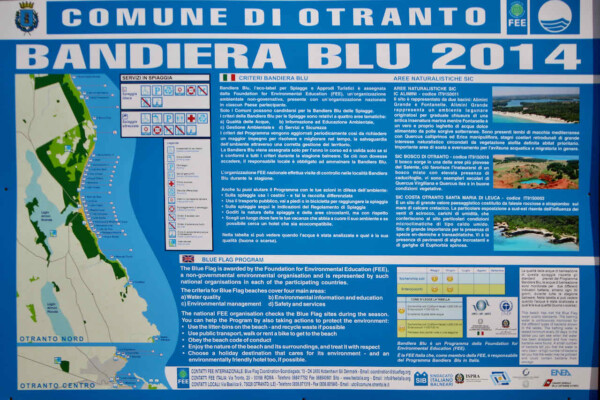 Cape Otranto – The Most Easterly Point in Italy

The first stop in our search for a swimming hole in Puglia was at Cape Otranto.  We searched for the most easterly point of Italy.

Had we not programmed it into both the GPS and my offline map app, we would have missed it.  It was hidden behind a modern navigation tower and was marked as a military zone.  The lighthouse was not marked at all until we came up a little road and found the museum sign. 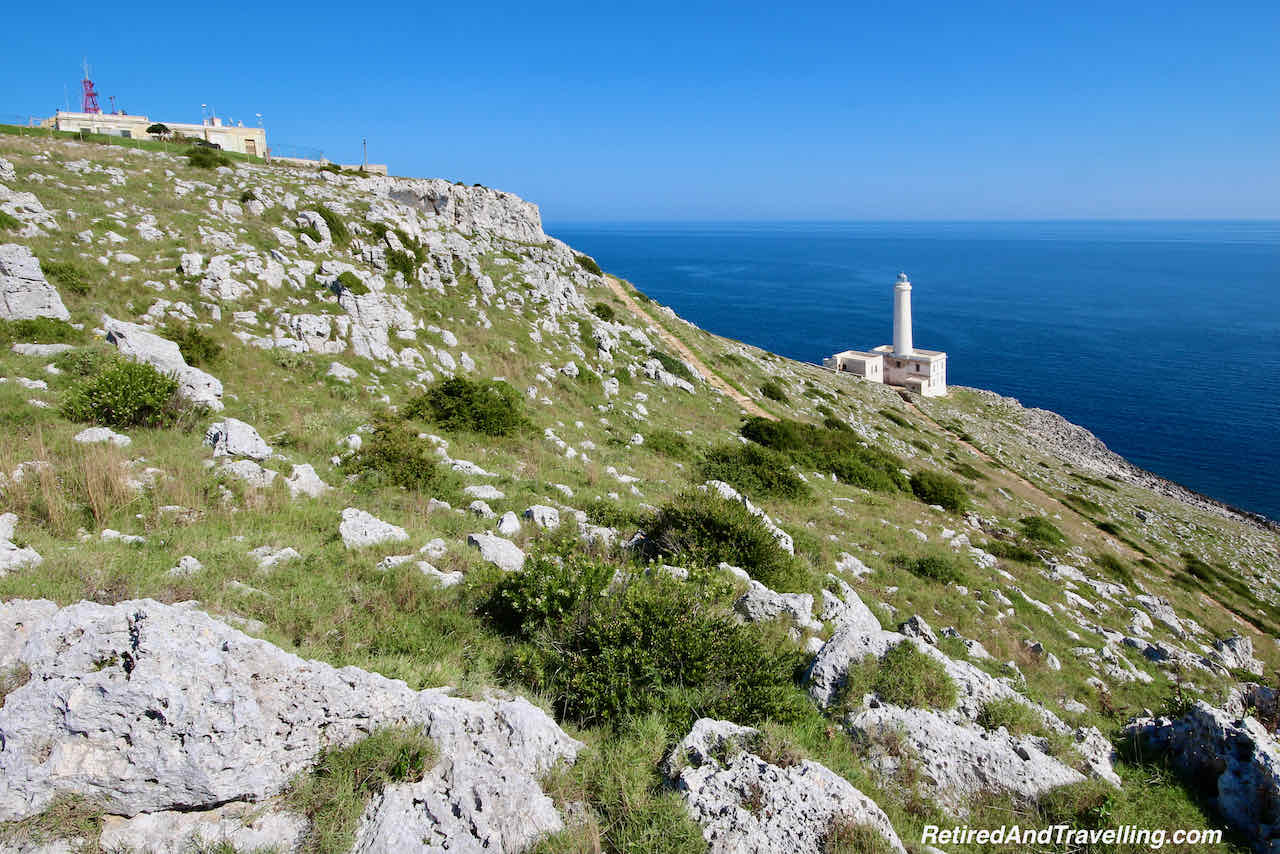 We walked through the fields as an act of faith until we got close enough to the water.  Down below we saw the lighthouse. There were lava like rocks all the way down to the water.  Signs posted said the swimming was not safe.  This was not our watering hole for a swim. 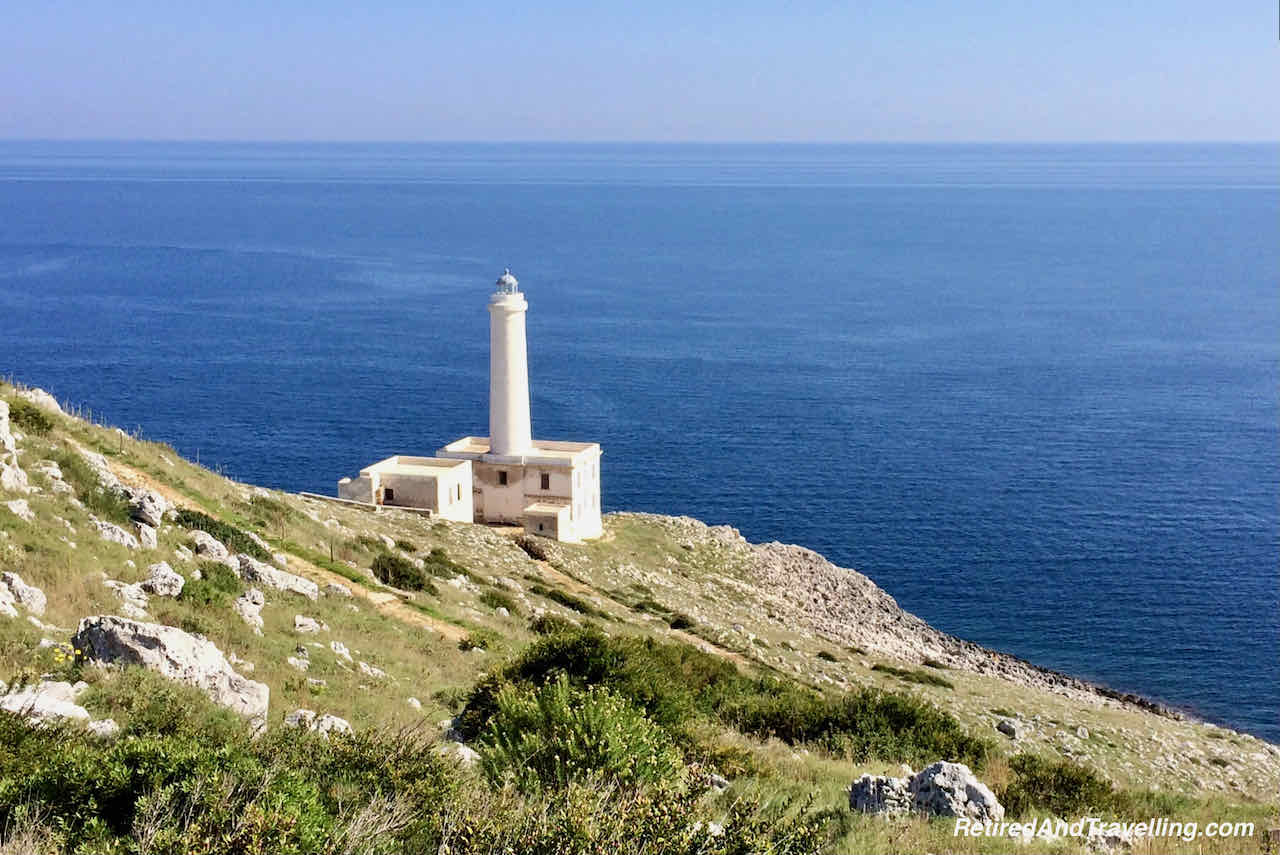 Swimming In The Grotto at Porto Badisco

We stayed on the shore road and ignored unclear signs that might have said “road closed”. We had no trouble with the road so we kept going until we hit Porto Badisco.

As we entered the village we saw signs for the grotto. We navigated through town and then backtracked.  This was a common water approach we saw before to get down on the low road. 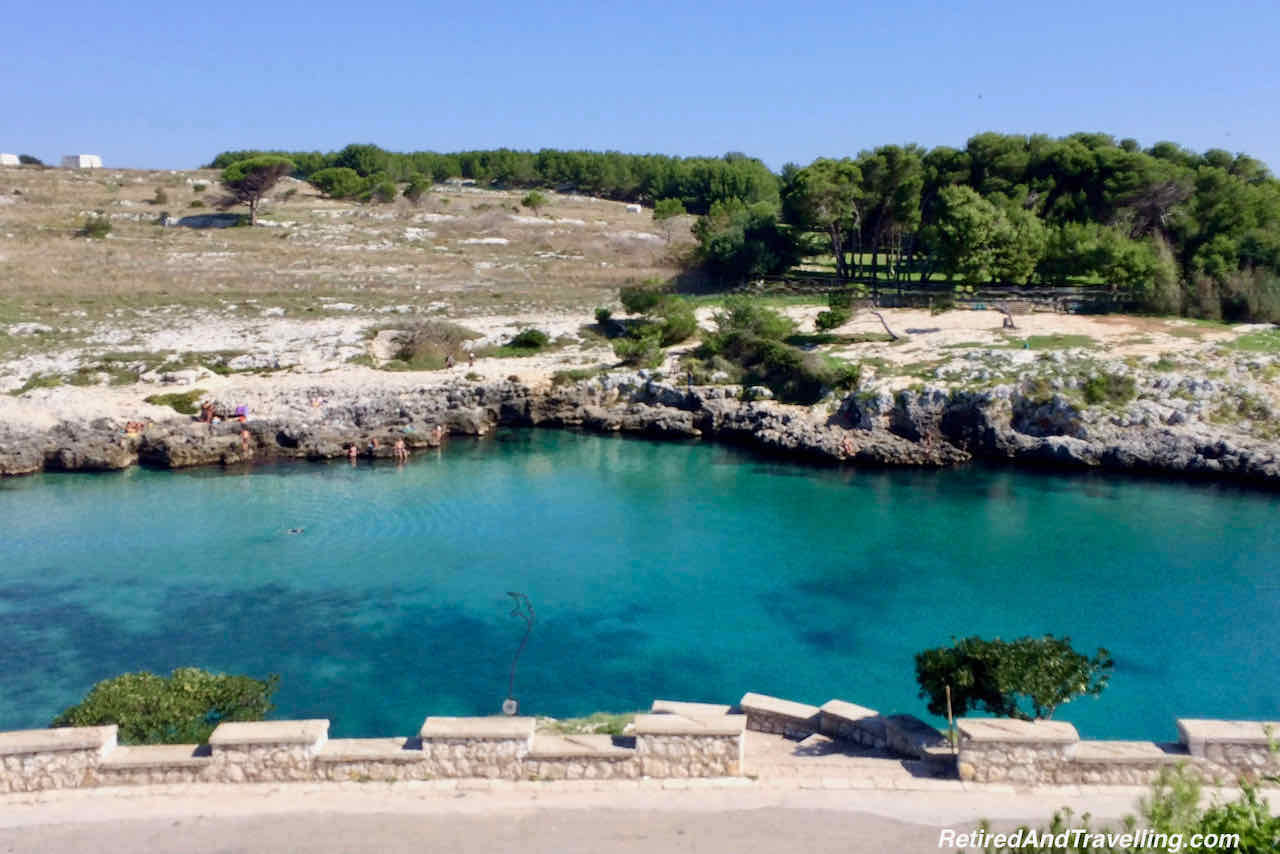 The water was crystal clear. This certainly served as a great swimming hole in Puglia. There was a small sand beach but the rest of the entry points were down lava like rocks. The locals scrambled in and out over the rocks.  But we went in on the sand beach. Undressing like locals behind our towels we donned our reef shoes and headed in. We had still not developed tough beach feet! 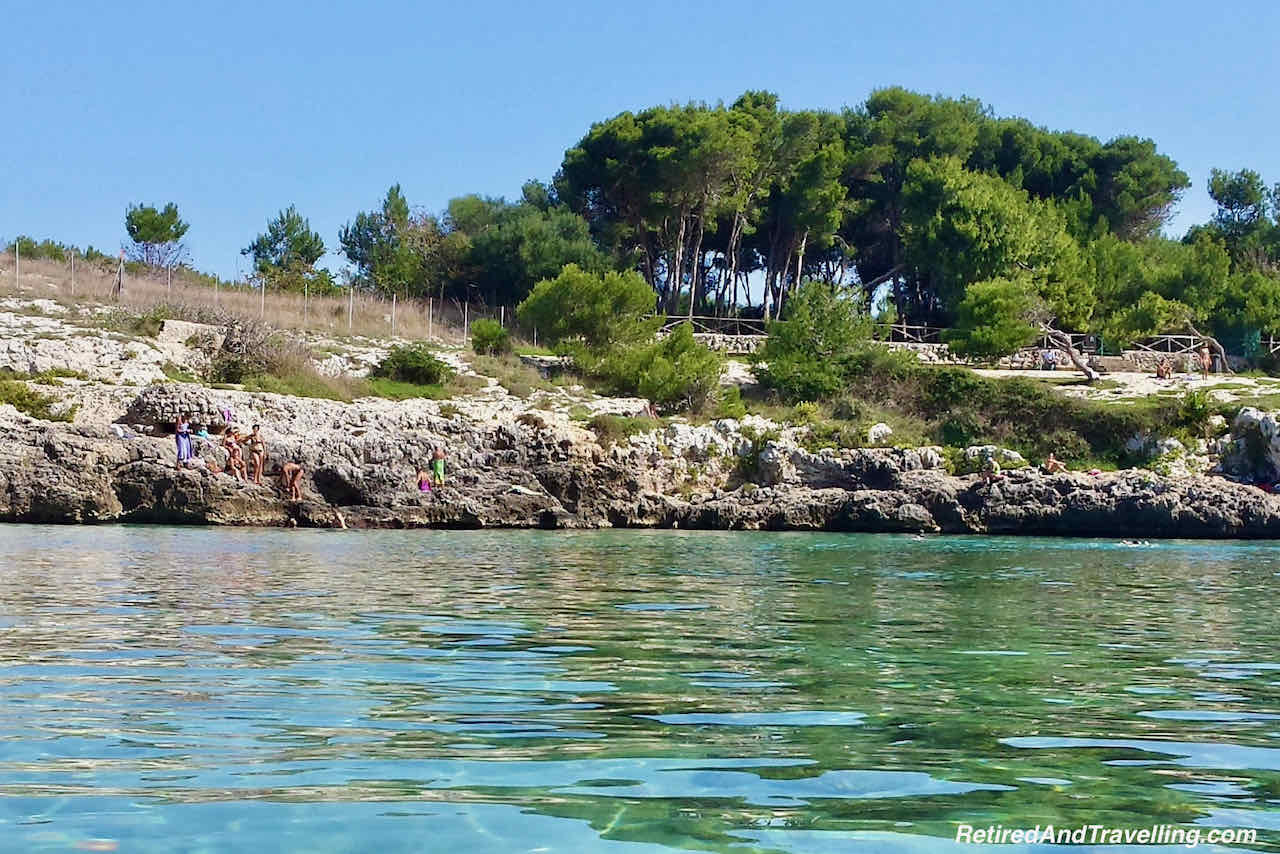 I was a bit fooled by how many people were in the water and thought it must be really warm. But 3 steps in and I was no longer fooled. While the top 6 inches was warm, the temperature quickly dropped.

Of course, David had to dive in and start dolphin kicking away.  He left me in the wake of his splash. By the time he was out to the middle of the bay, I figured I better get it over with and I dove forward.

David beckoned me to the part of the bay over a sandy bottom and assured me that it was warmer there. Either it was true or my core had chilled, but by now the water just felt refreshing. We paddled along and cooled down.  Several other obvious tourists came in from the beach. But never made it past mid-thigh. 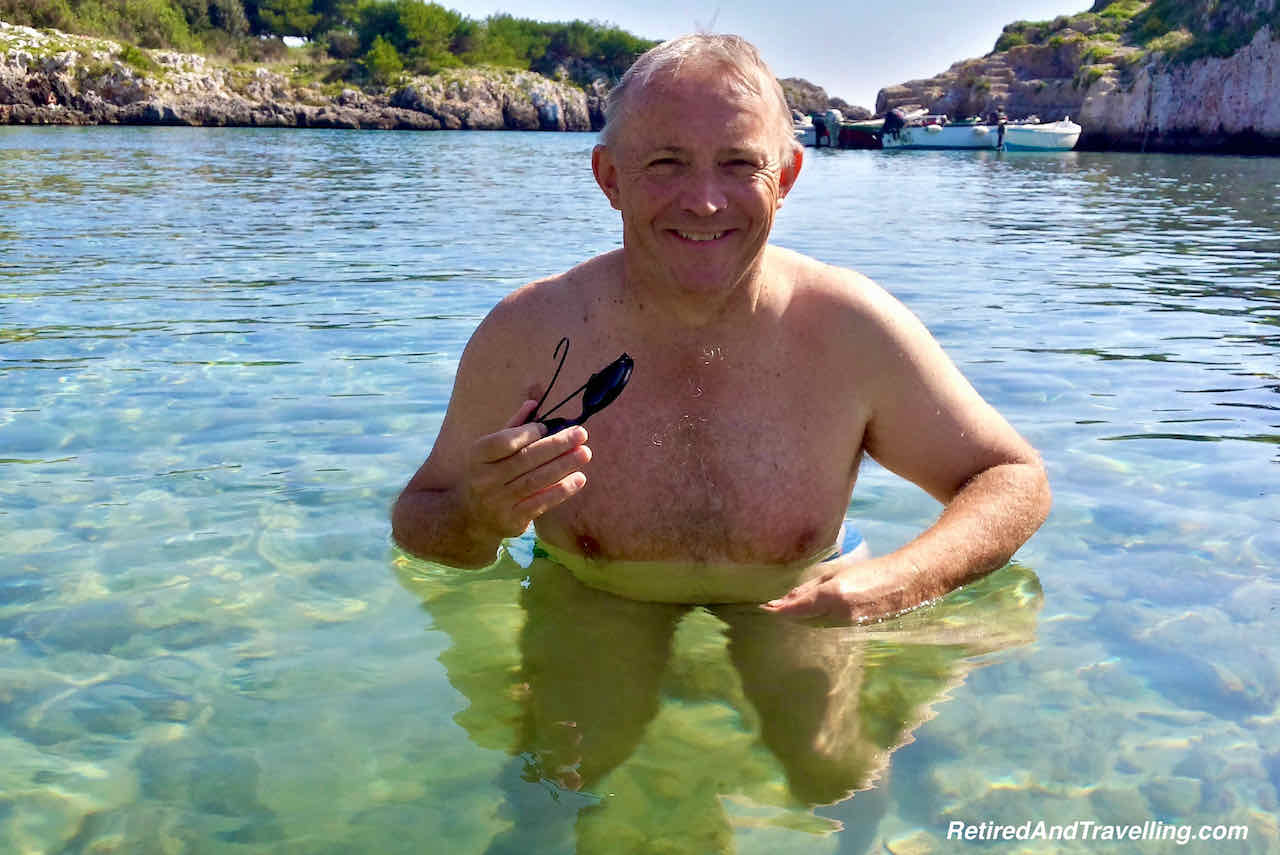 This swimming hole was a great find.  Although we were sure it would not be quite so quiet in the middle of summer. The downside of our visit in off-season was that the restaurant by the beach was not open. Hunger won out over being a lizard in the sun for too long. It was time we moved further south.

Along the way we saw other bays with crystal blue waters.  We were certain there were many other great stops on our travel along the coast in Puglia. 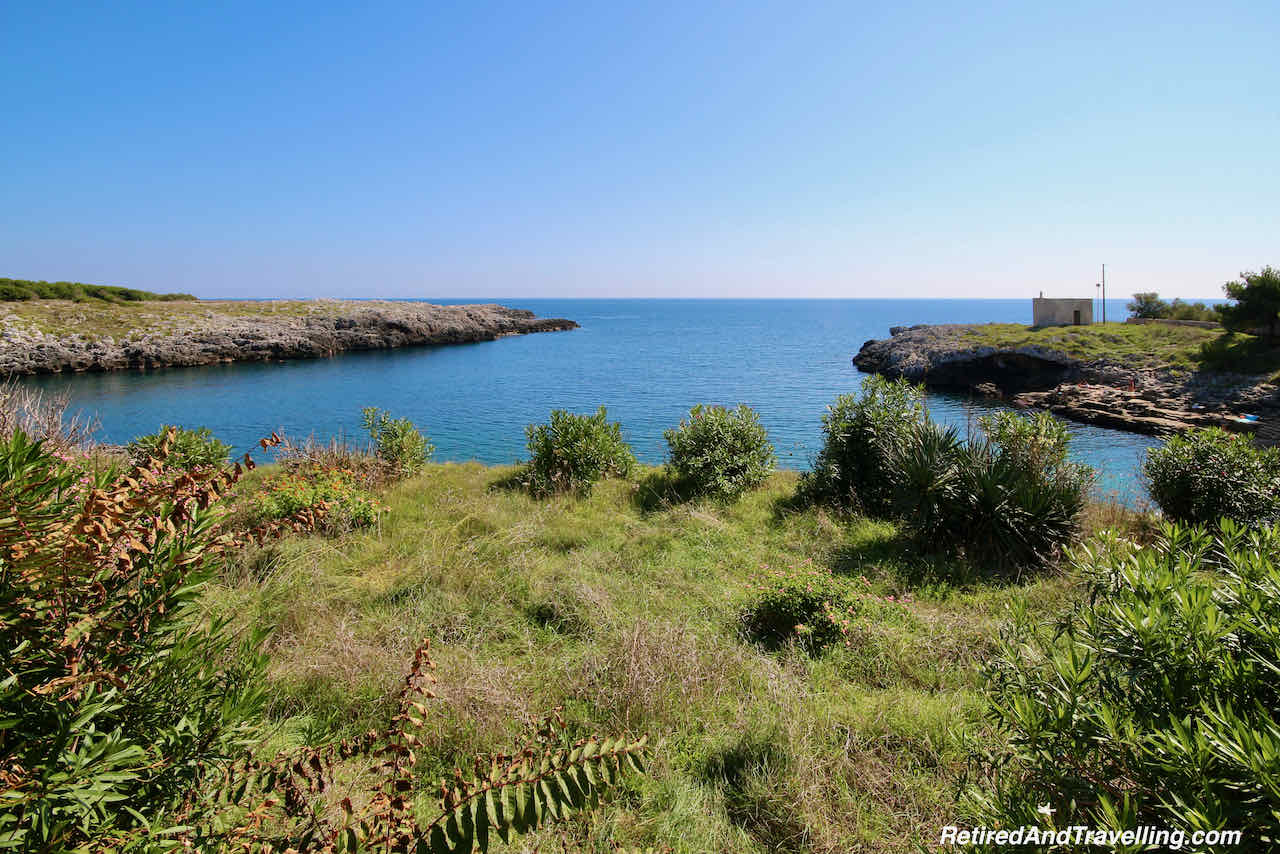 The next spot we had marked for a swimming hole in Puglia was Santa Cesarea Terme. The town was known as a resort spot for its thermal baths.  But first on the agenda was lunch.

We stopped as soon as we saw something that looked open. Bypassing the bar on the street level for a better view upstairs might have been our mistake. David had no trouble ordering a seafood salad and some local pasta while I stuck with prosciutto and melon.

Let’s just say that most of the meal was sent back uneaten. There was no question by the waiter and no reduction in the bill for probably the worst meal we had eaten on our 10 weeks in Italy. At a restaurant next to the City Hall in a resort town, who would have thought this?

Leaving the restaurant, we were momentary entranced with the very mosque-like buildings on the shore. The big colourful one turned out to be a private villa as did the other two more sedate ones. These may have been bustling thermal spa retreats in season.  But in mid-October everything was shut tight. 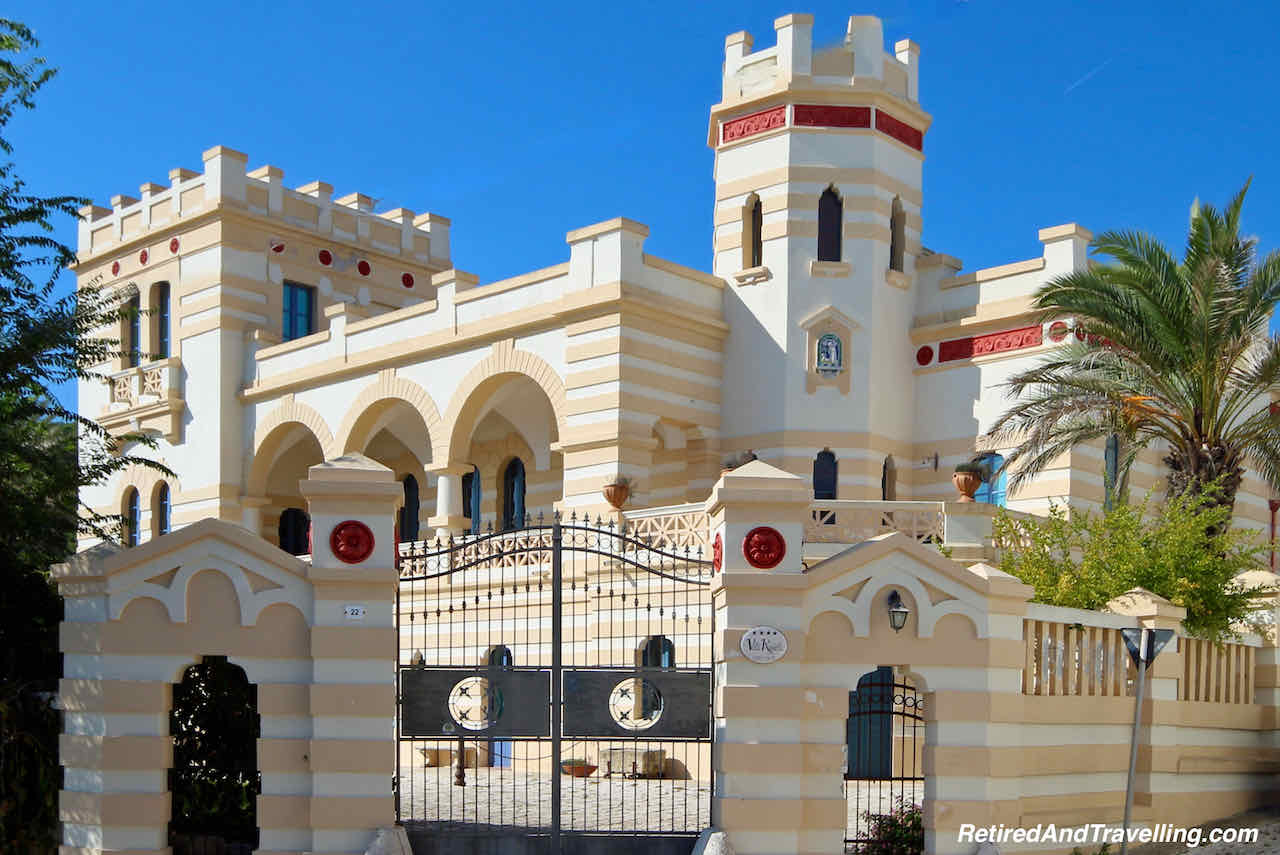 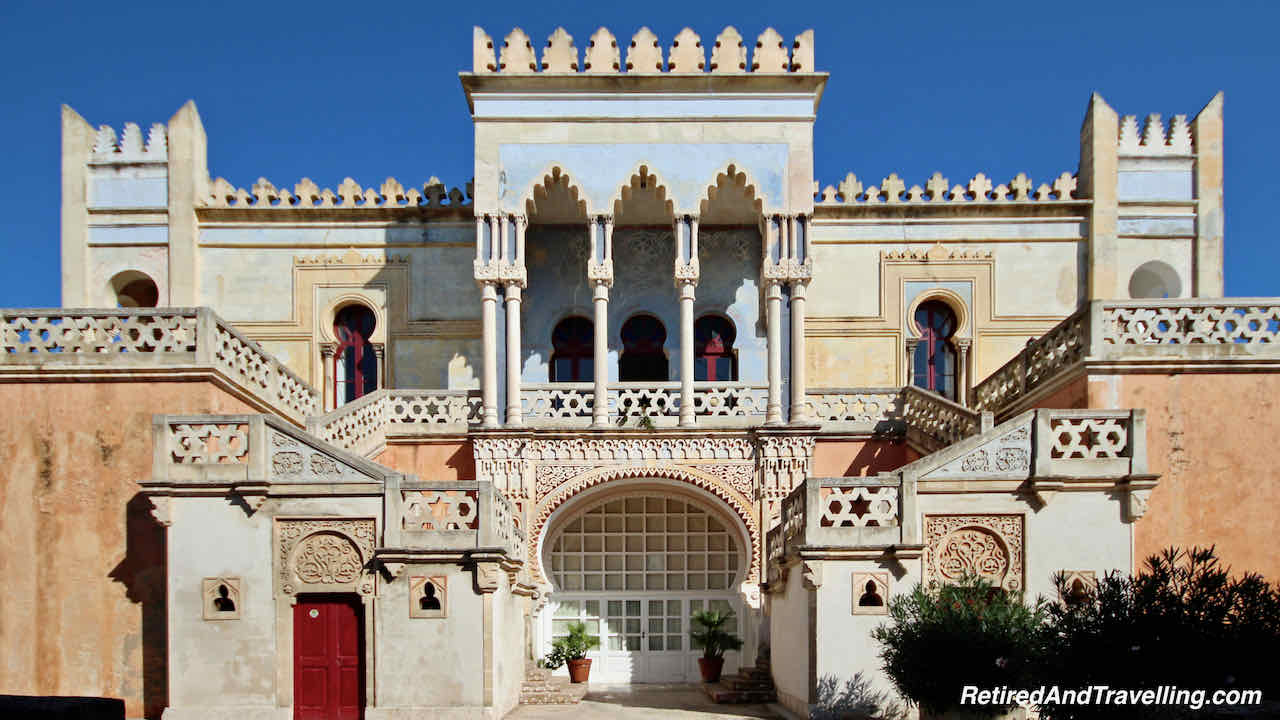 We Were Glad We Found A Swimming Hole In Puglia

I called uncle and cancelled our final trek to the little village of Castro. The town was know for the Zinzulusa caves. Given how few attractions remained open in off season, we were not sure what there would be to see if we got there.

I was crusty with salt from our dip in the swimming hole. We went back to Lecce to rest and picnic in the room before we packed to leave.  Our next stop was Matera.

We were so happy we found our swimming hole in the crystal blue water. It did not offer us the sandy beaches we found at the southern point in Puglia.  But the water was refreshing and we lazed on the rocks with the other locals.

We would certainly try other points along this coast on a return trip to Lecce.

What is your favourite swimming hole in Puglia? 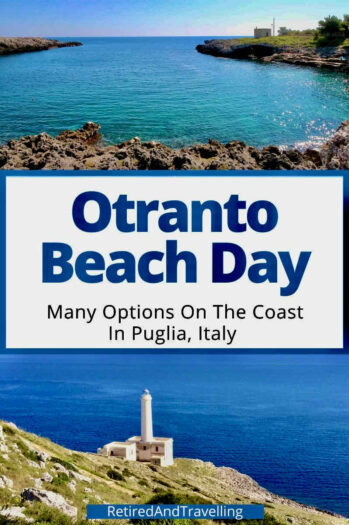 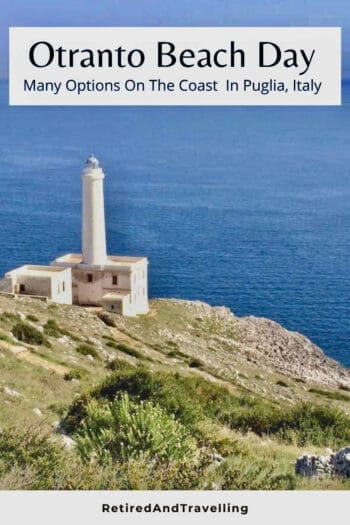 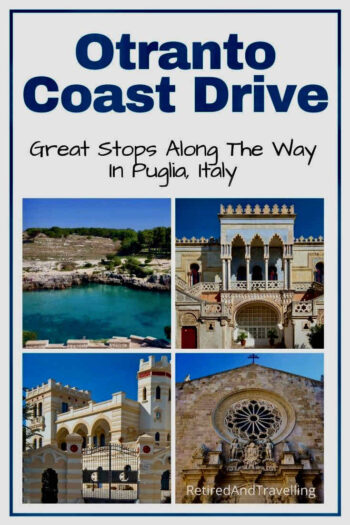