Many Great Examples Found In Ravenna The Mosaic Town

Renowned for its ancient mosaics, Ravenna was one of the towns on our list to visit from Igea Marina.  By train it was an easy 45 minute,  second class, milk run trip. Rick Steves travel guides suggested that we could visit Ravenna The Mosaic Town in 3 hours.  But we factored in a little more time and made sure we stopped regularly for food and gelato!

The train dropped us off and we got pointed in the right direction for the major sites on our list. We stopped at the famous “yellow bikes” which were free to use for tourists. We saw a few more points to pick up the bikes. But thought we would not be wandering too far afield to need bike transport. It was amazing to see how many local people of all sizes and ages were biking throughout all of this part of Italy. 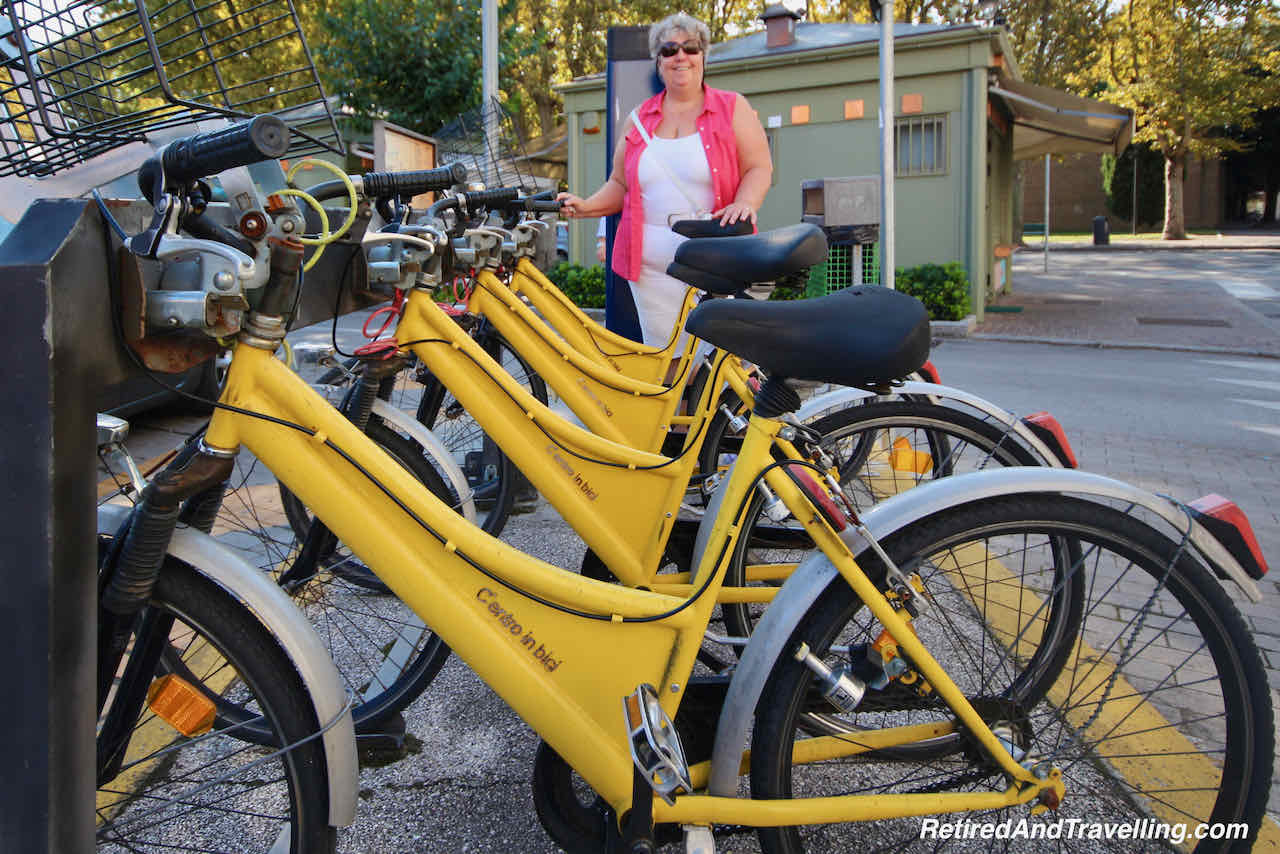 I was silly and let David lead. For some unknown reason he lost his navigational sense when we hit Italy.  And he always seemed to head in the wrong direction.  And was adamant that he was right. Good thing my offline map app with location info was always accurate!

We walked along Via Roma until we hit the old town gate.  And then we diverted back to our first target location. We wondered why each town seemed to have a Via Roma.  Maybe the Italian equivalent of Main Street? 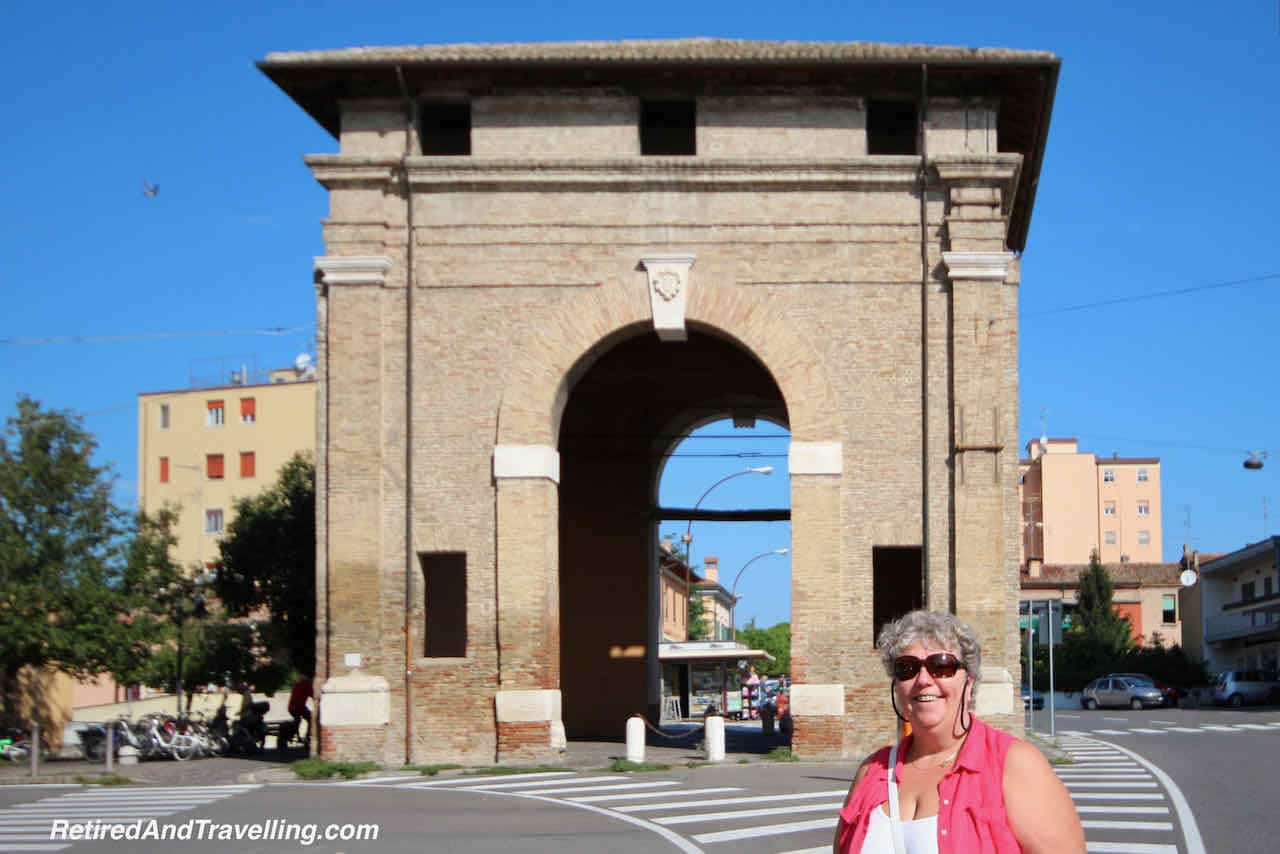 The advantage of wandering off the main paths was the opportunity to find small local cafe spots. The one we found was quite empty when we got there.  But quickly filled with locals and what looked like the local literary crowd scribbling away in journals. We sat in the sun and felt Italian for our break.

Stopping At The Basilica of San Vitale

Back on the main path we easily found the Basilica of San Vitale and got combined tickets.  This covered the main sites in Ravenna. San Vitale was one of the remaining locations in Italy that clearly showed the Byzantine past. Built in an octagon shape, each alcove was different. 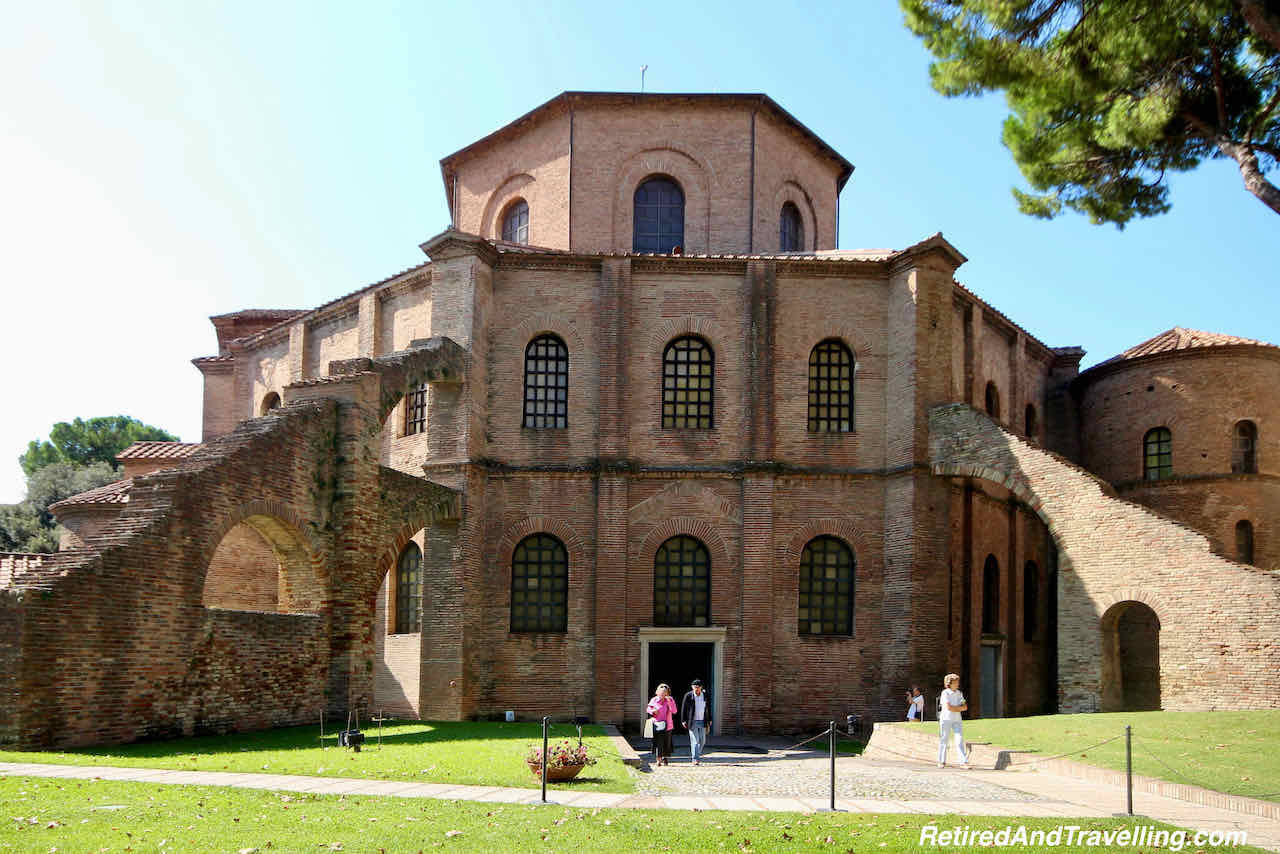 The main church altar area was decorated on all sides.  And the ceiling showed intricate mosaic scenes.  They were vivid and colourful representations of landscapes, plants and birds. 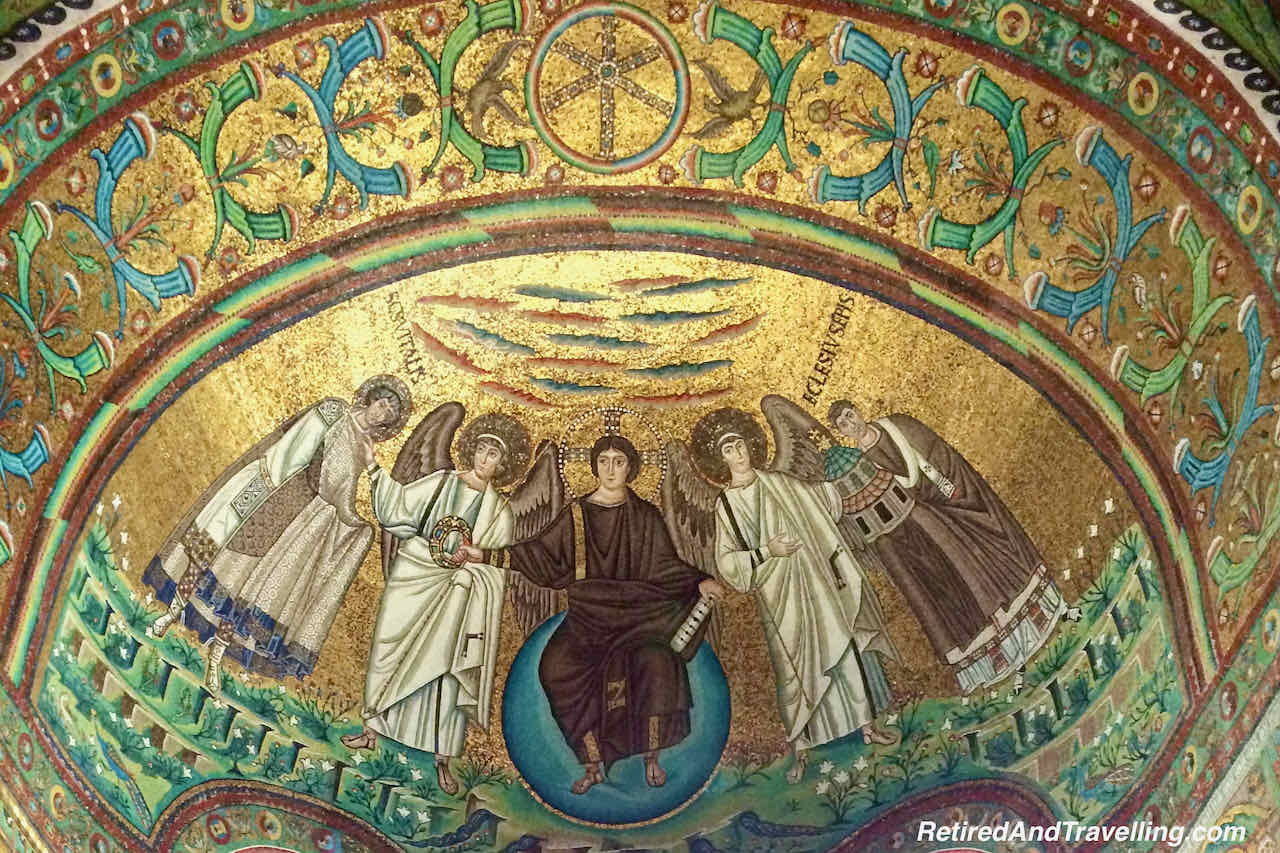 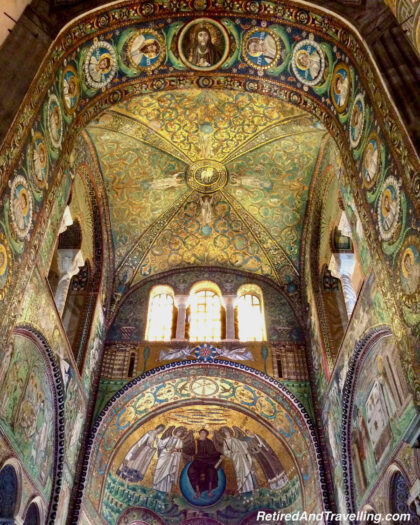 The centre dome rose high and was equally resplendent in art. From the centre of the dome we saw the eight sides of the octagon and the unique decorations in each alcove. 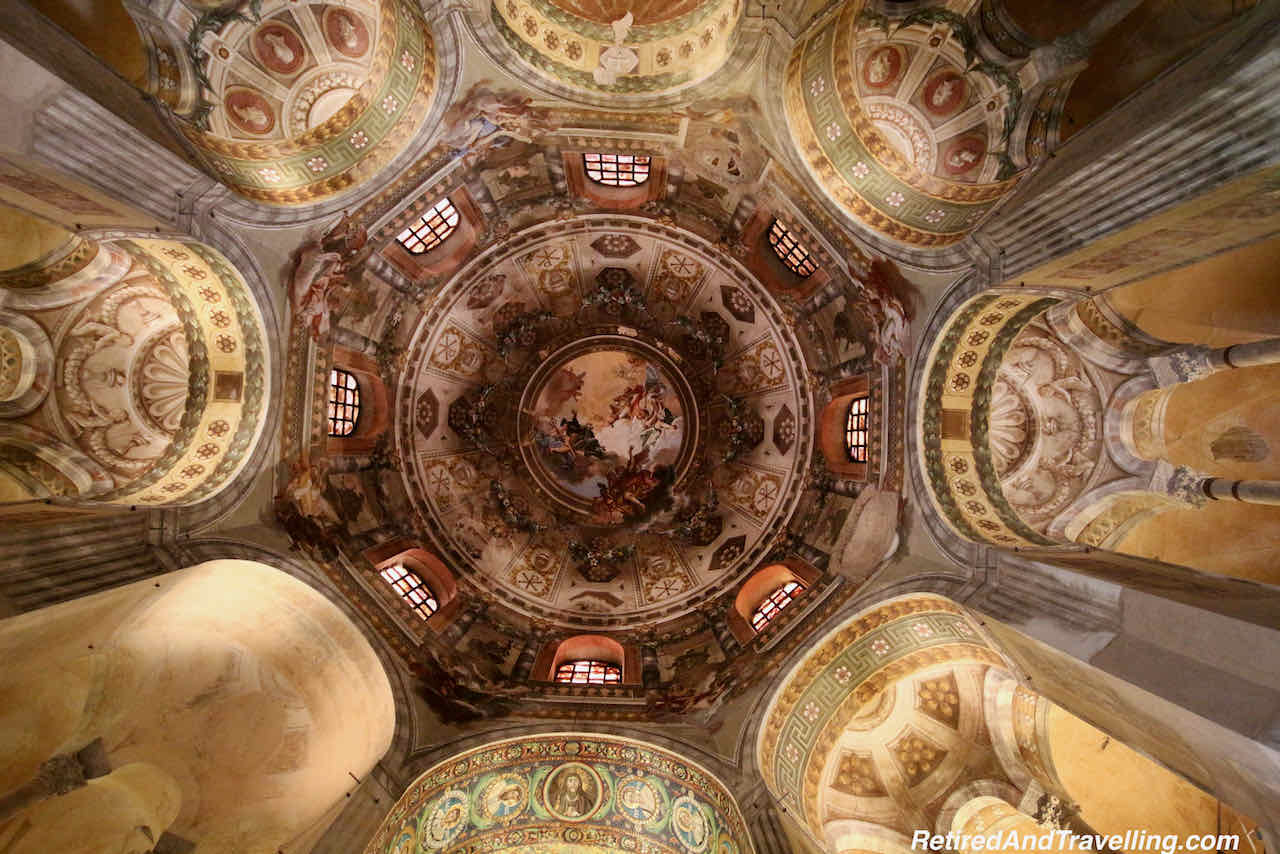 We looked down and admired the mosaic tiled floors.  Above us we saw admire the onyx windows and marble pillars. 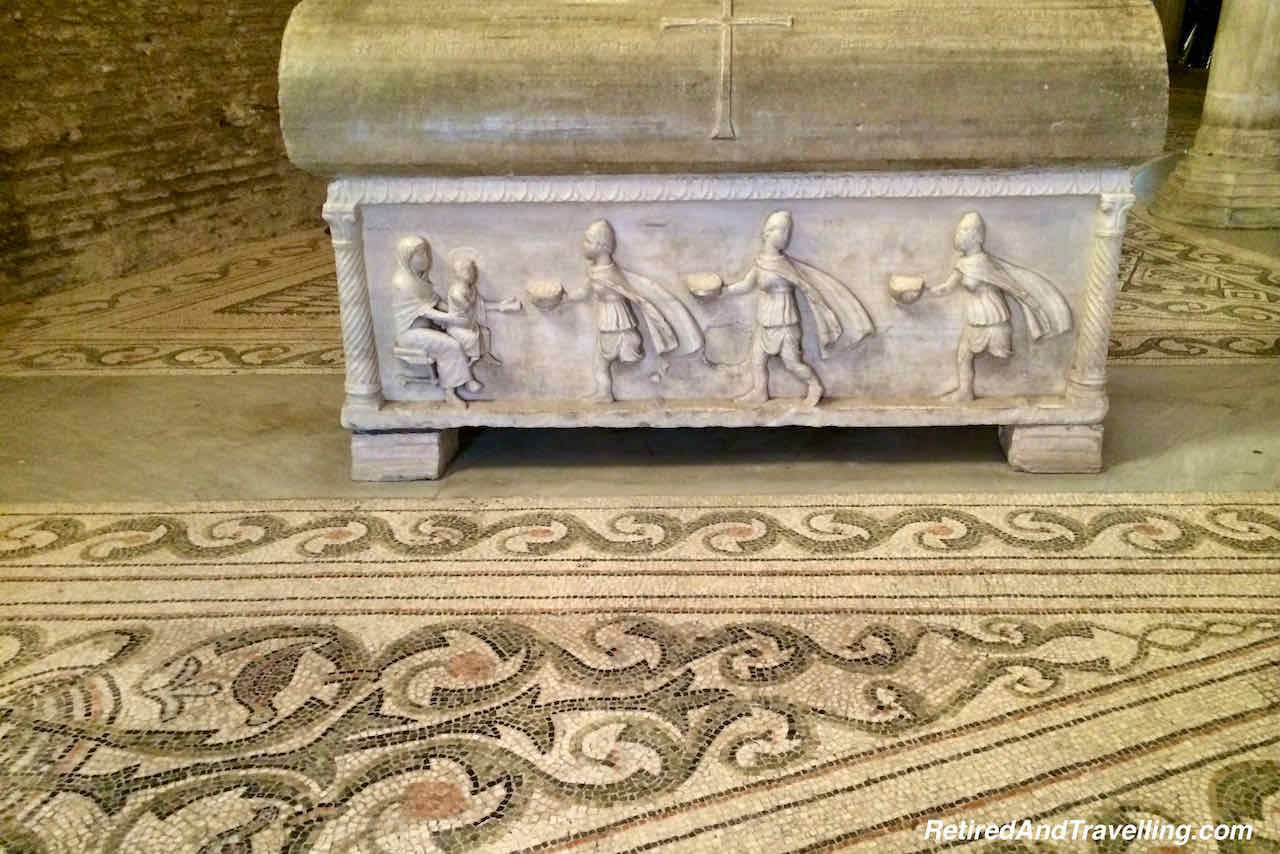 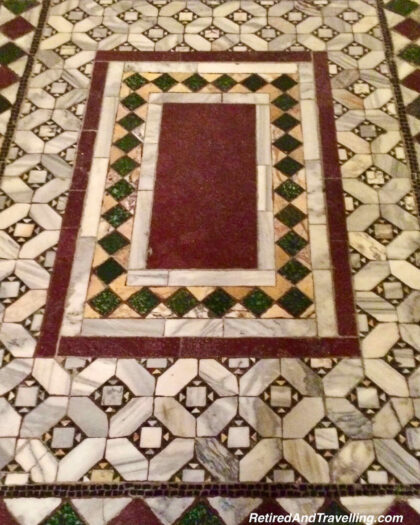 Before we left the property we wandered back to the Mausoleum. It was limited to a 5 minute visit to protect the mosaics in the small enclosed space. This dark building was lit indirectly to display the colours and intricate mosaics in each alcove. 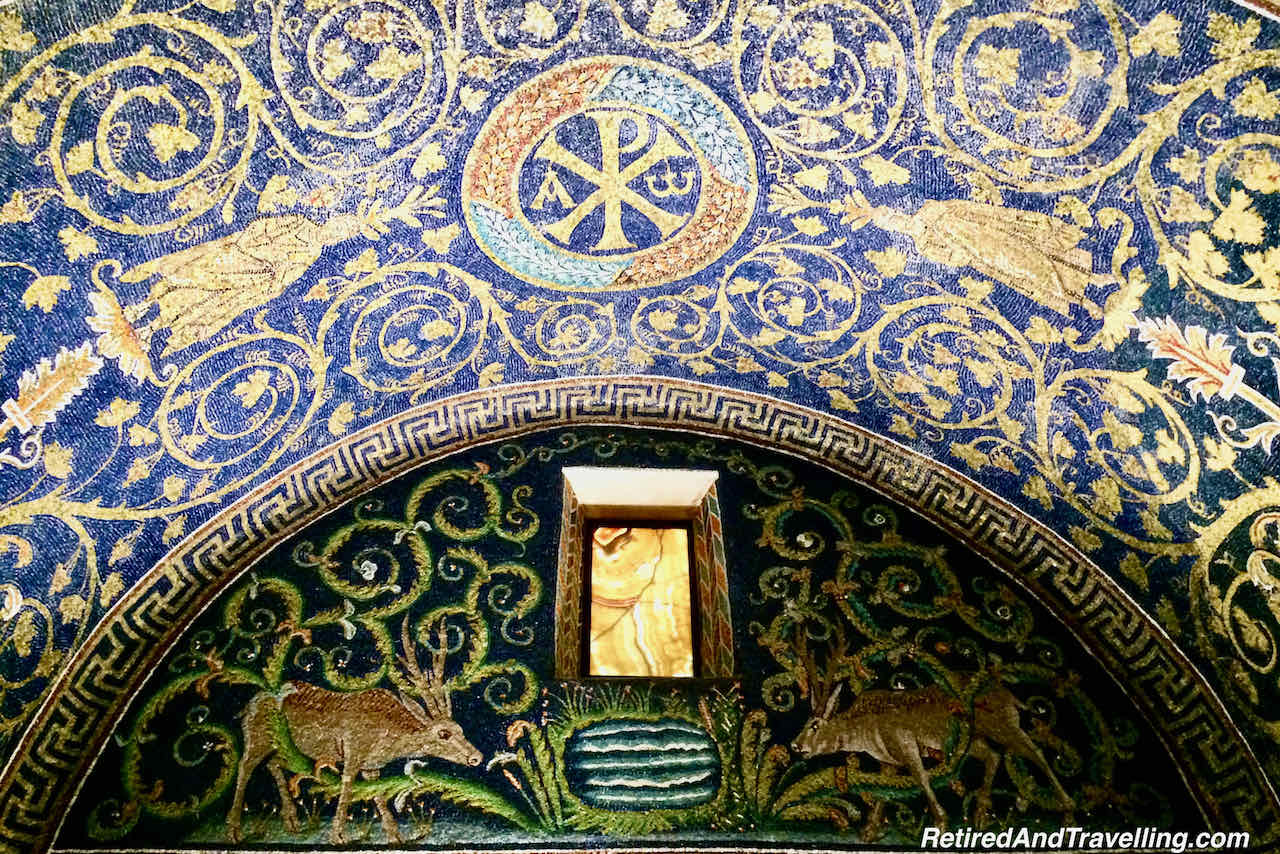 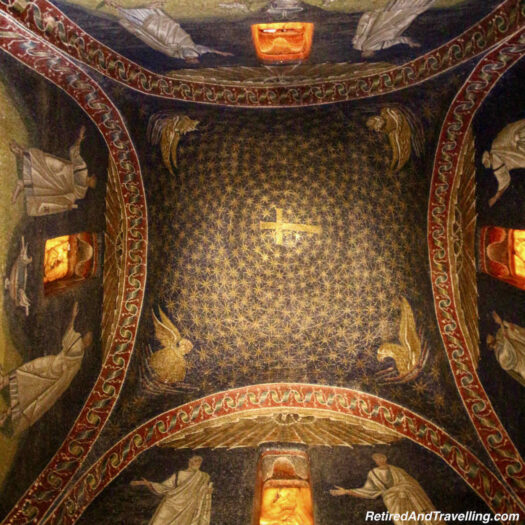 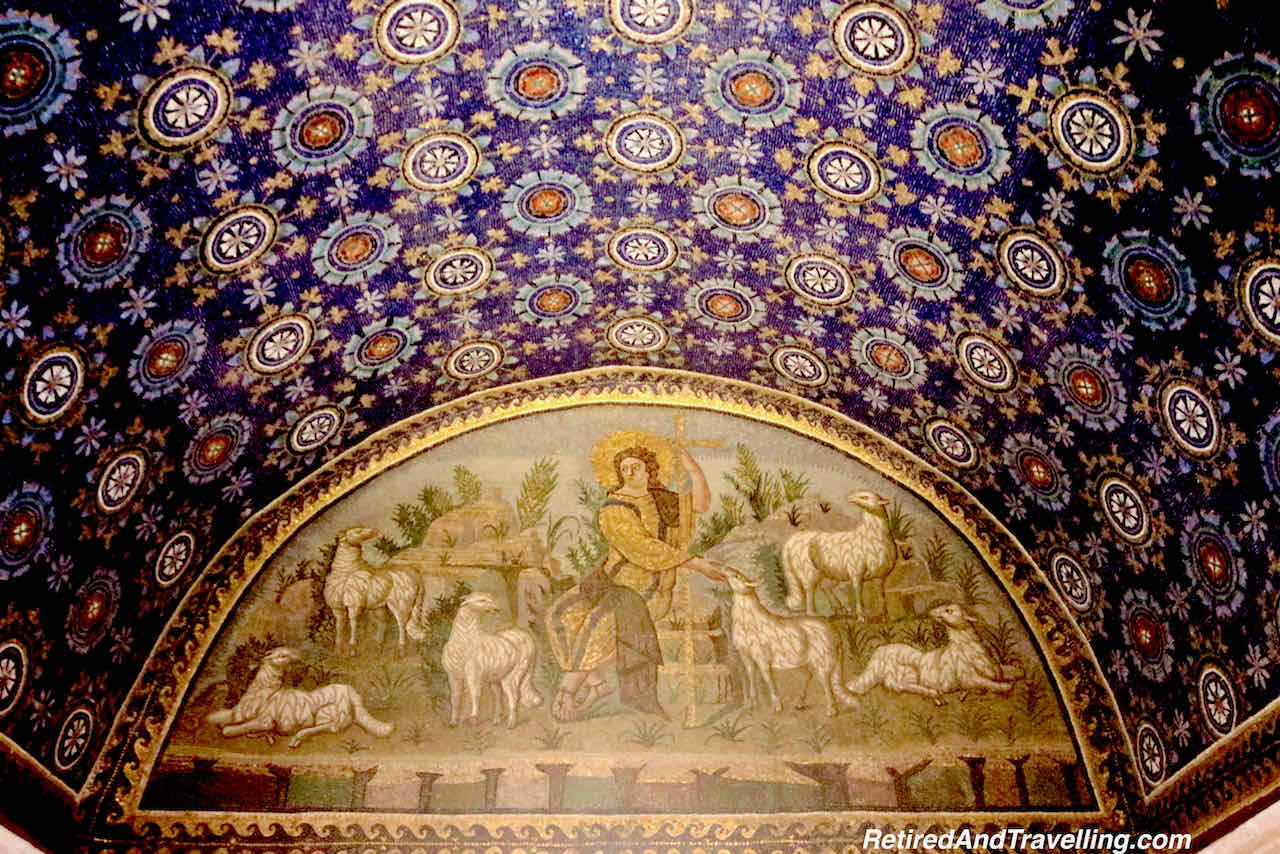 The Basilica of San Vitale was a first great view of Ravenna the Mosaic Town.

Stopping for a brief glimpse in the shop across the street, we found modern themed mosaics.  These were designed to attract those less interested in ancient biblical mosaics. 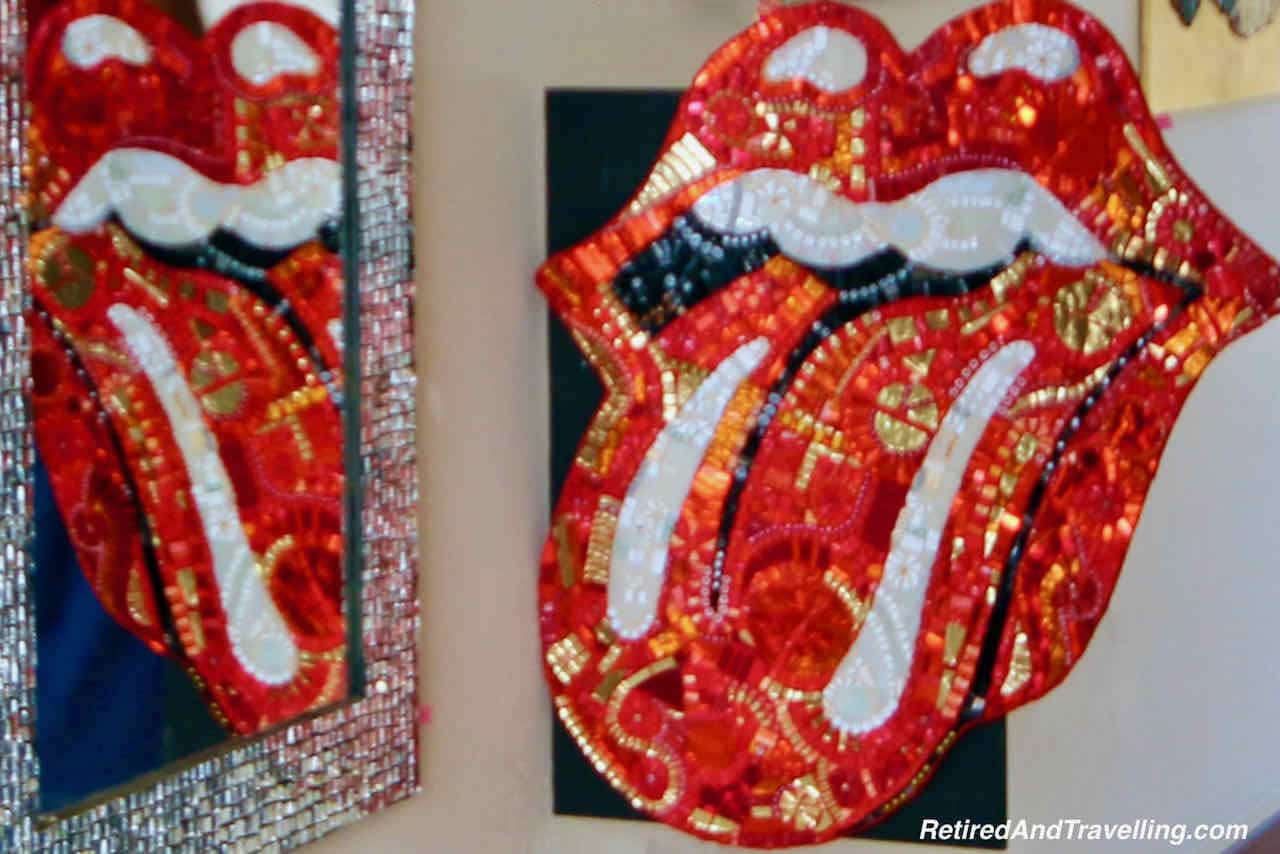 Strolling a meandering path, we arrived in Piazelle Picole, the busy centre square. We found a spot off to the side that still allowed people watching.  But even this spot was not safe from the sometimes pushy hawkers. A polite “no grazie” simply was not enough for some.

This tourist town was gearing down for off season. The restaurant only had about half what was on the menu. Had we stopped in the main piazza we might have eaten better. But we definitely would have had a better ice cream desert!

A Visit To The Basilica of Saint Apollinaire

Starting to drag, we headed for our last planned stop at the Basilica of Saint Apollinaire.  This church was dedicated to St. Apollinaris, the patron saint of Ravenna. While the outside of the building was quite simple, it hid the remnants of yet another amazing example of the mosaics of Ravenna. 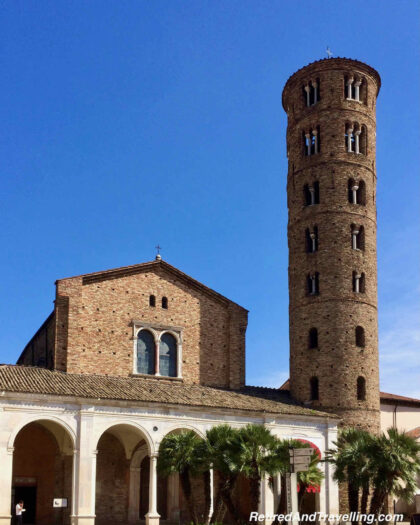 The mosaics along the hall of 24 marble columns topped with Byzantine carved capitals were marvellous examples of Byzantine art that have been well preserved.  Yet another great view of Ravenna the Mosaic Town. 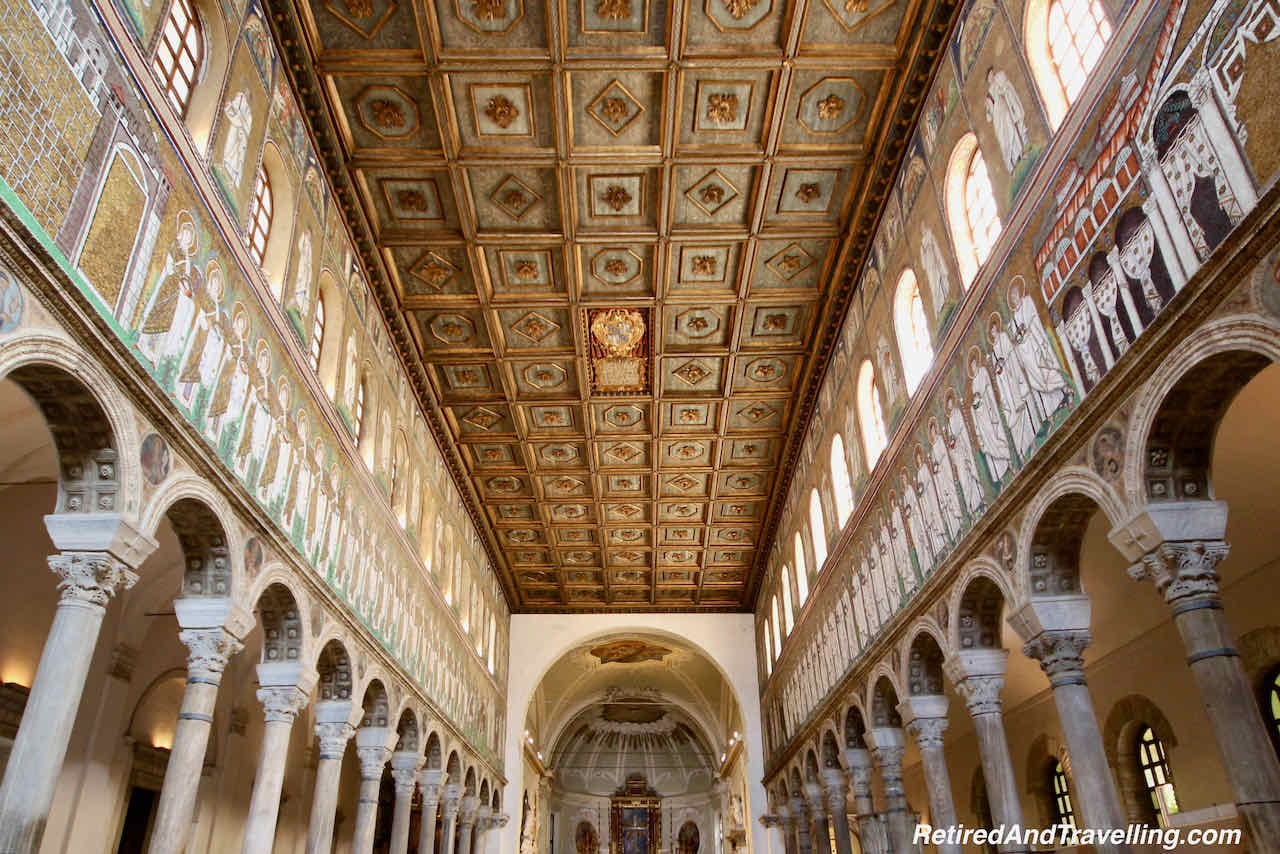 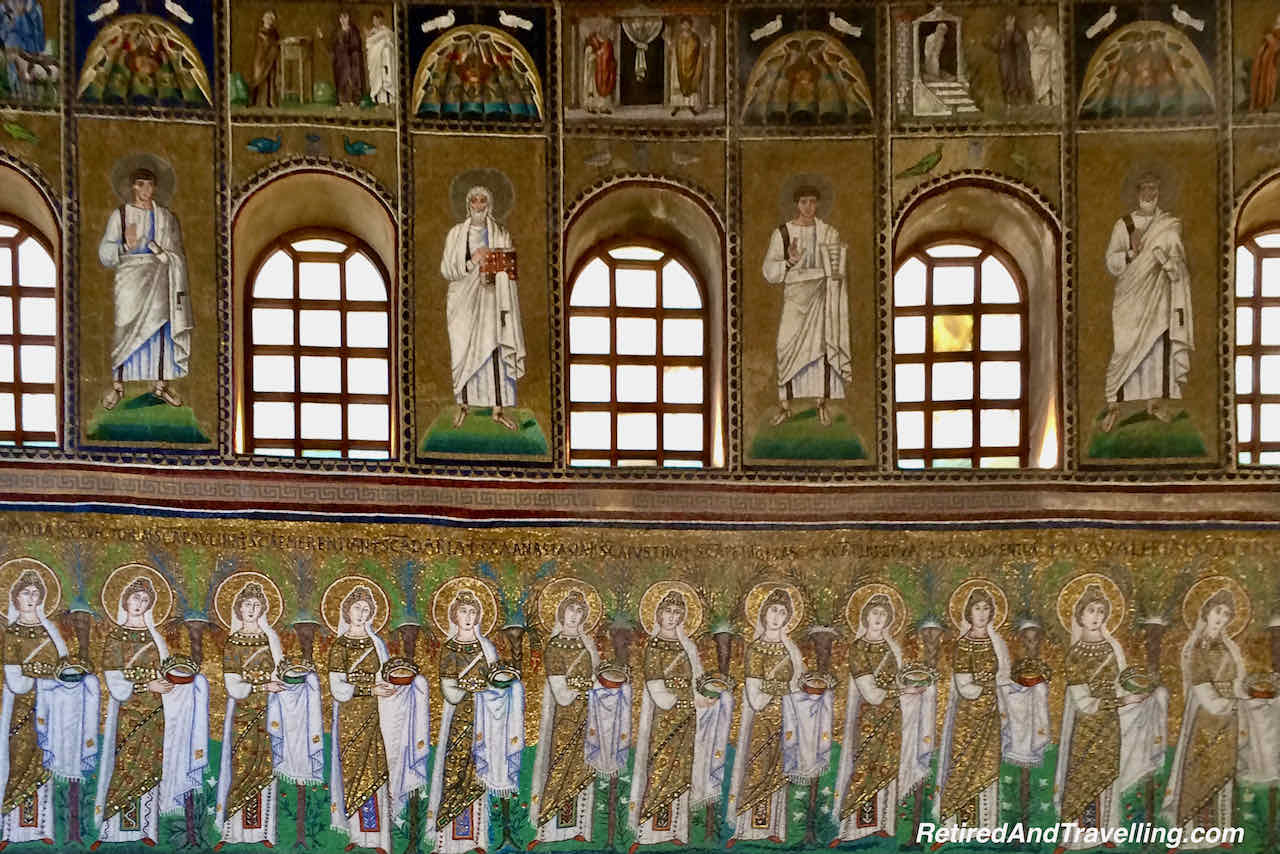 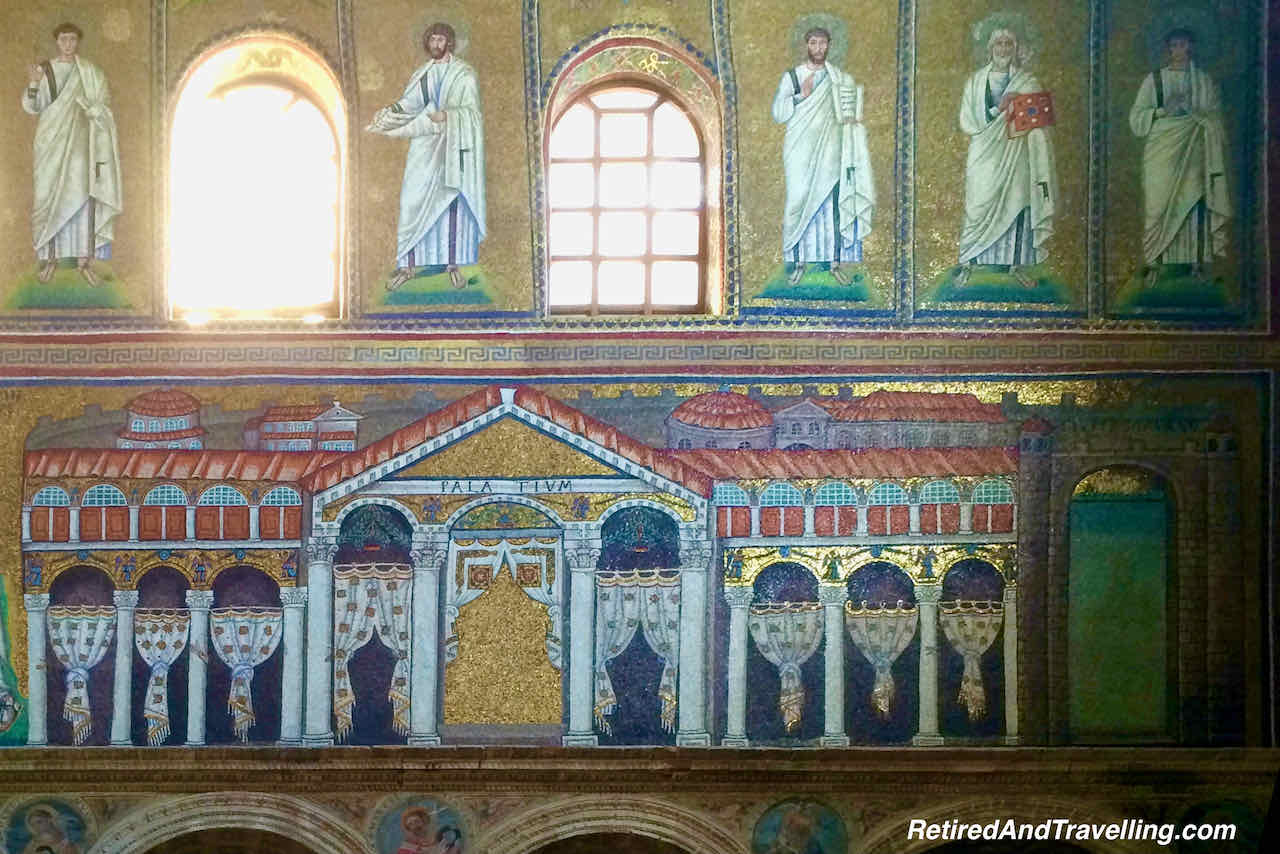 We made one final stop in the chapel before we left.  This was beautiful in another way. 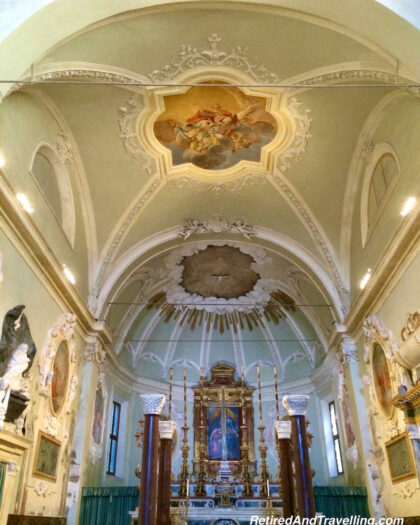 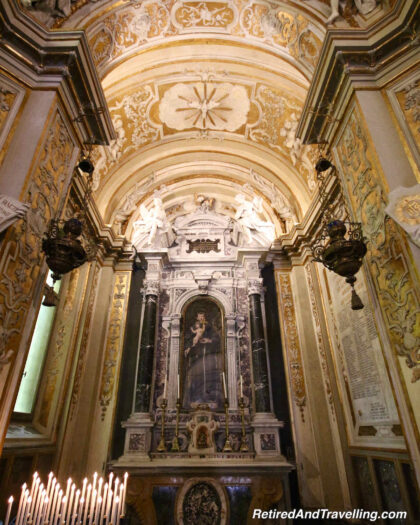 A Great Day In Ravenna The Mosaic Town

We started to walk towards the large gardens and finally ran out of steam. We passed the ruins of Palazzo di Teodorico and took our last pics.  The outside front facade was in remarkably good shape.  Although the back and inside have not survived as well.

The gates were closed so we could not go in. In doing a little research, it appeared that there are but fragments remaining of the mosaics that once adorned this palazzo. Most of the floors and walls were removed by Charlemagne to adorn his villa in Germany. 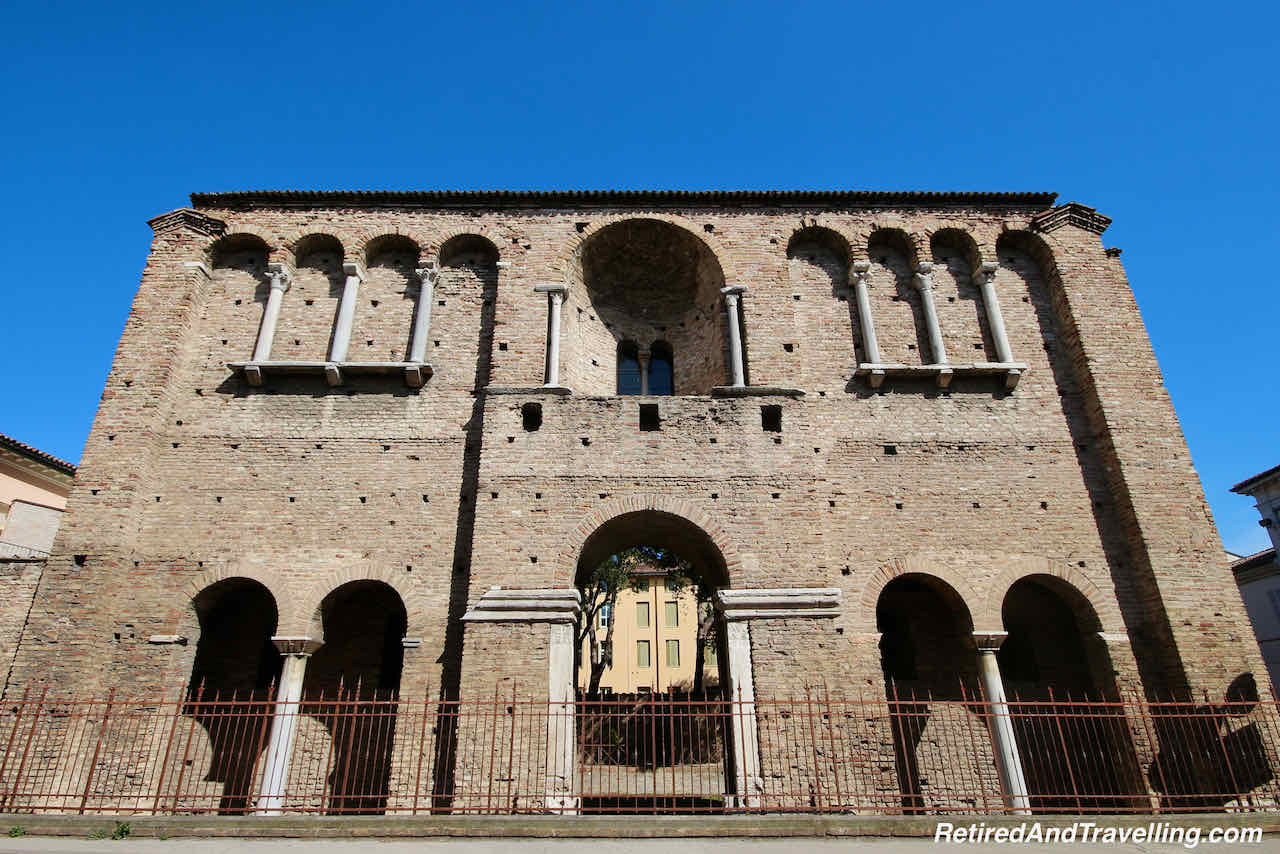 We caught a train just before it departed and said goodbye to this beautiful mosaic town as we headed back to Igea Marina.

This visit was be a good reminder of the long history of Italy and its heritage from many other cultures over the years.  A beautiful stop on our 10 week tour of Italy.  It reminded us of the beautiful works of building art we found when we visited Mantova (Mantua) as a day trip from Verona.

Did you find the mosaics of Ravenna to be amazing?  Did we miss a major site in our trip to Ravenna? 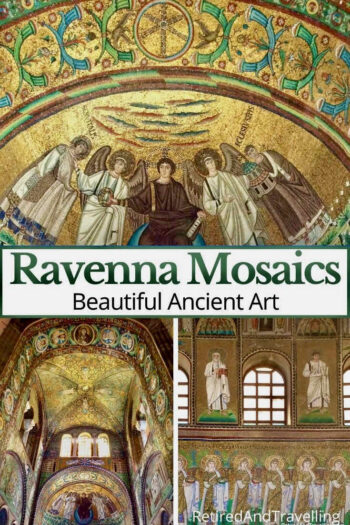 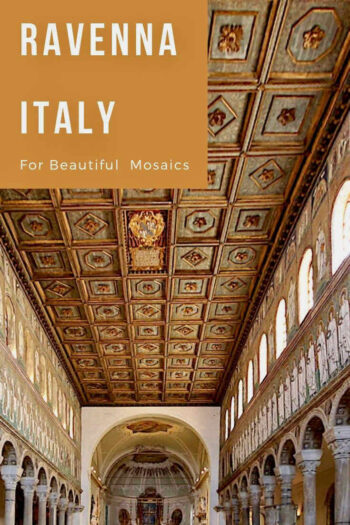 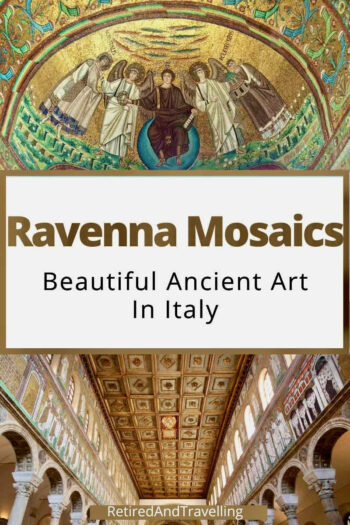